Lamy is in an odd position.  Despite bringing in a different industrial designer for each pen model they release, and the emphasis on following the Bauhaus design principals, to most people they are know for two pens.  The low end stalwart of the school/first fountain pen market, the Safari (covering also the Al-Star and Vista variants), and the design icon, the 2000, considered by many outside of our hobby, a high end pen and a one time purchase.  Also not helping is the wide array of models below the ‘2k’.  The similar CP1, Logo, LineA, and ST, along with the Accent, Aion, Studio, and Scala, can make people forget that Lamy also produce higher products, chief of which is the Imporium.

Before we cover the pen we must really go back in history.  Back in 1990, Lamy released a new top end pen, the Persona, designed by Mario Bellini.   Supposedly at the time three different caps were considered before deciding on the final choice, the one with the flush fitting clip.  Roll forwards 25 years, over a decade after the Persona was dropped, and Lamy resurrected the pen, the differences this time being the use of their standard Z55 14k gold nib, plus another of the caps that had previously been considered for the production Persona.

There is something both classical and modern in the looks of the Imporium.  The cap maintains the Bauhaus philosophy with its industrial shape, functional tubular appearance, and dome top.  The body, however, gives a classical Graeco-Roman feel of a doric or tuscan column.  The base is a separate disk, which by appearance and shape could be considered a pedestal to the barrel.  On the underside of the base is a simple indented circle.  There are three options colour wise.  Silver with gold clip/base and rhodium plated nib with gold highlights, an all black pen and nib, and this version, a black pen with gold clip, base, collar, and nib highlights.  This is a pen that can be brought out in a business meeting without any concerns of the impression it may make on others attendees. 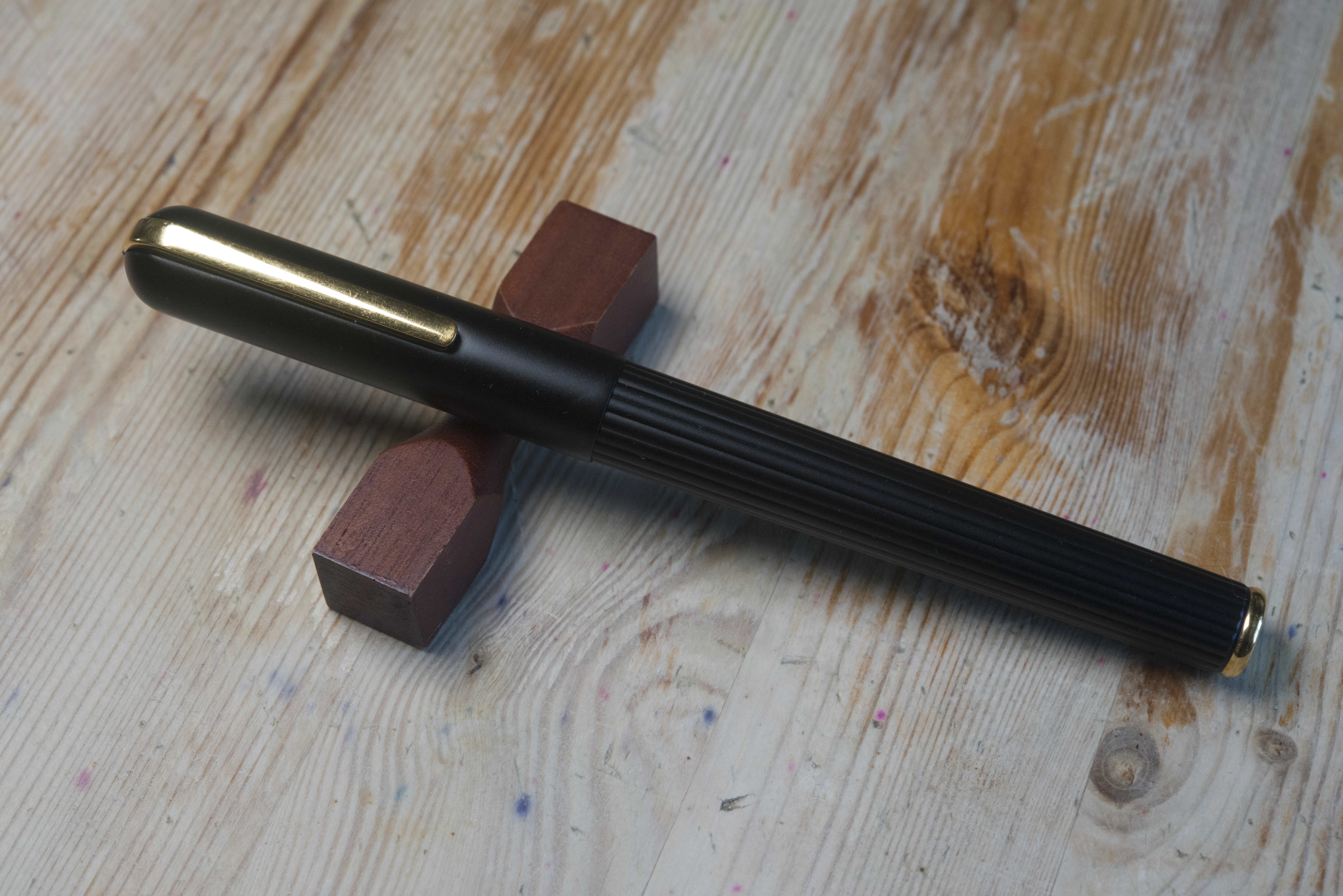 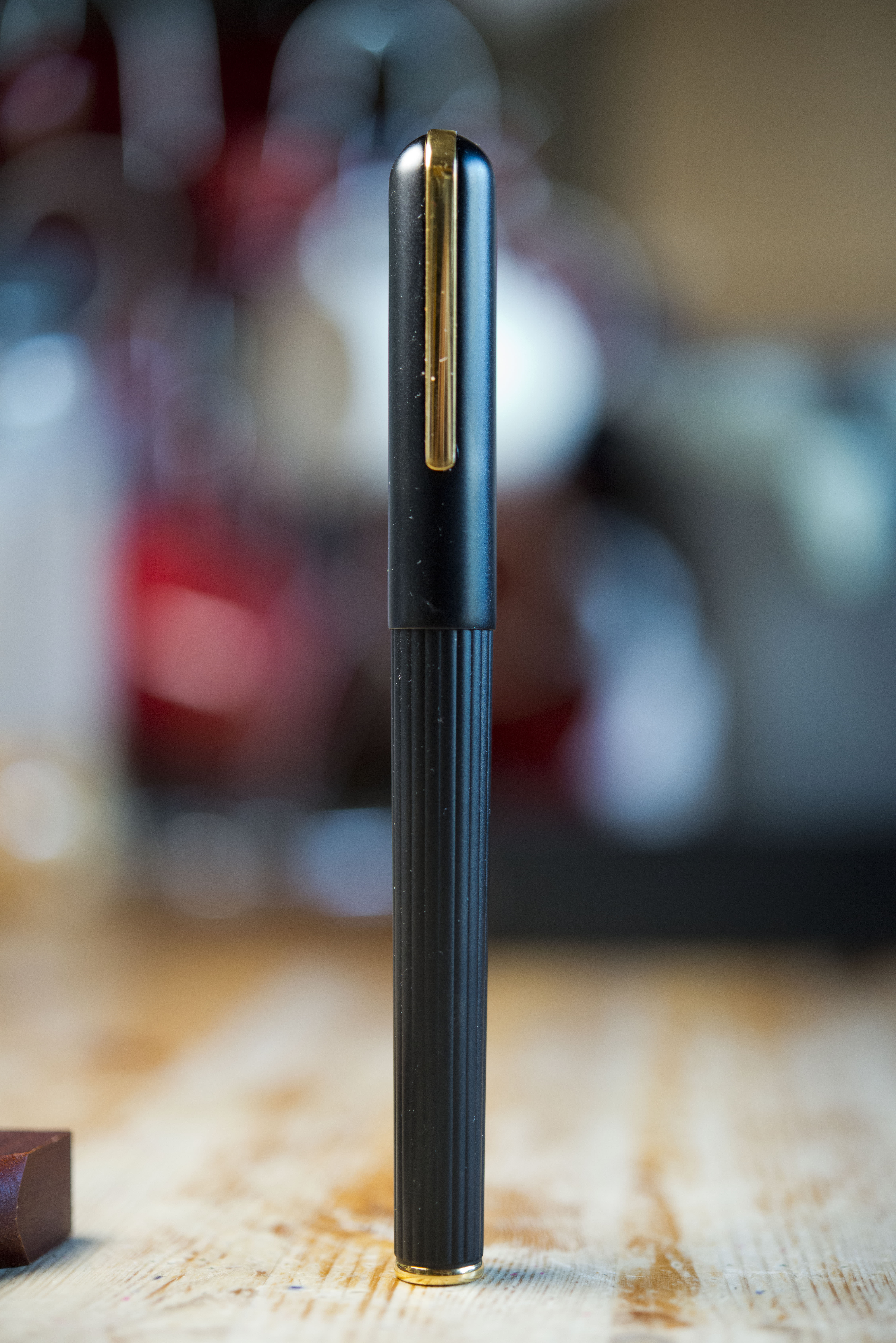 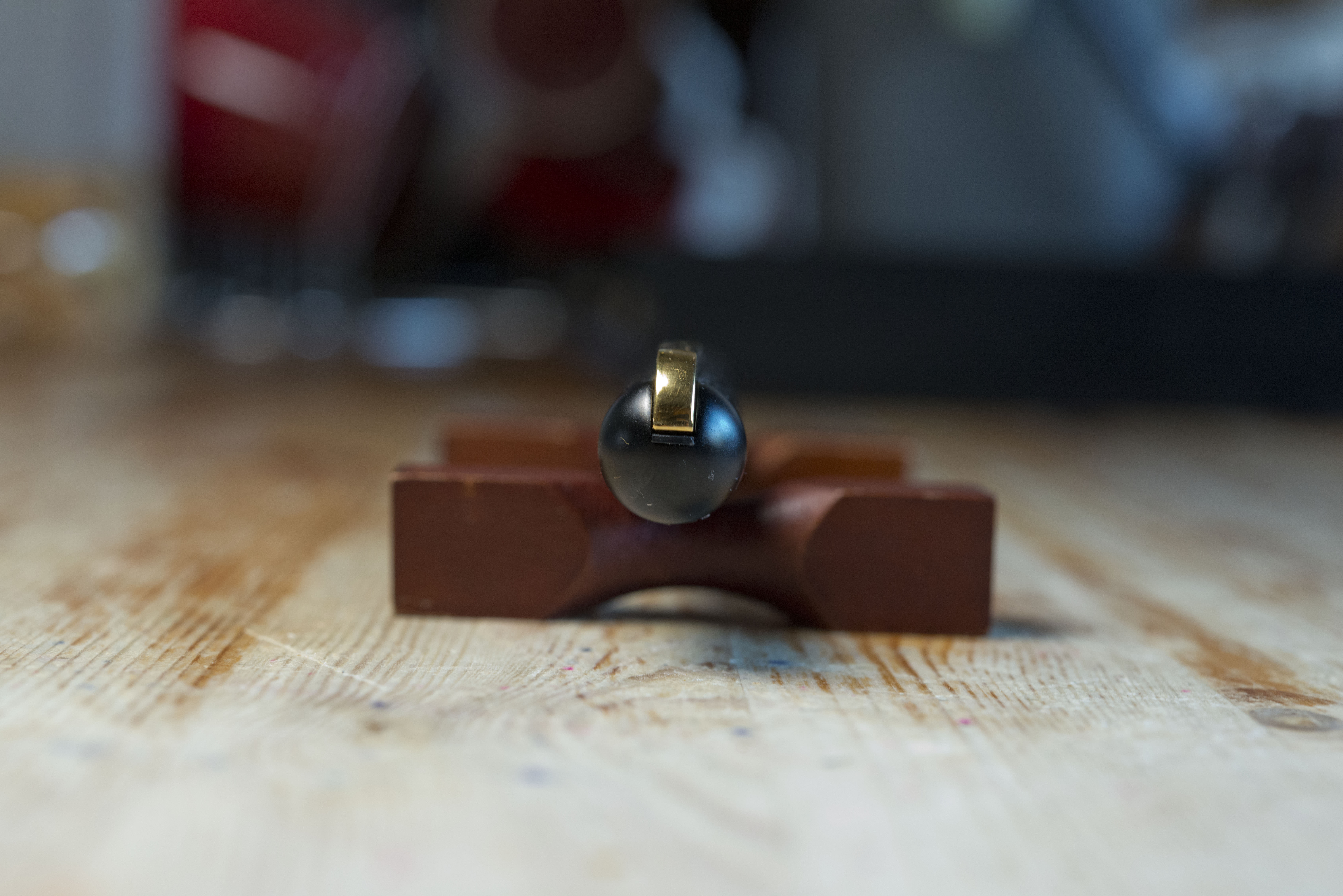 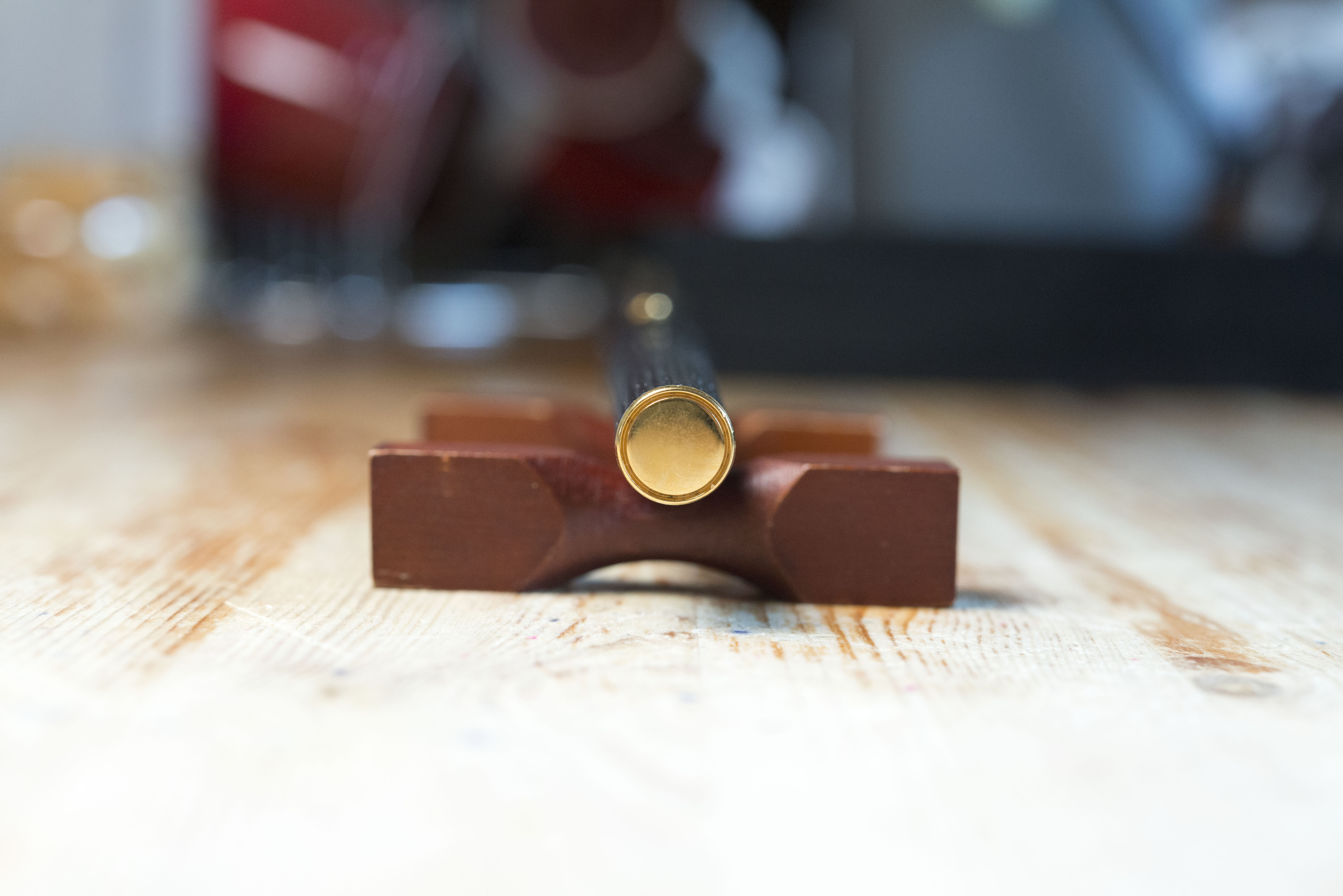 The clip is hinged at the top of the cap and sprung, to close with a satisfying snap.  On the underside there is a nub to apply pressure on the pocket as well as an engraving of Germany.  While the nub is smooth, the pen sits securely in a pocket and is easy to slide over a seem.  Lamy is also engraved on the right side of the clip near the top. 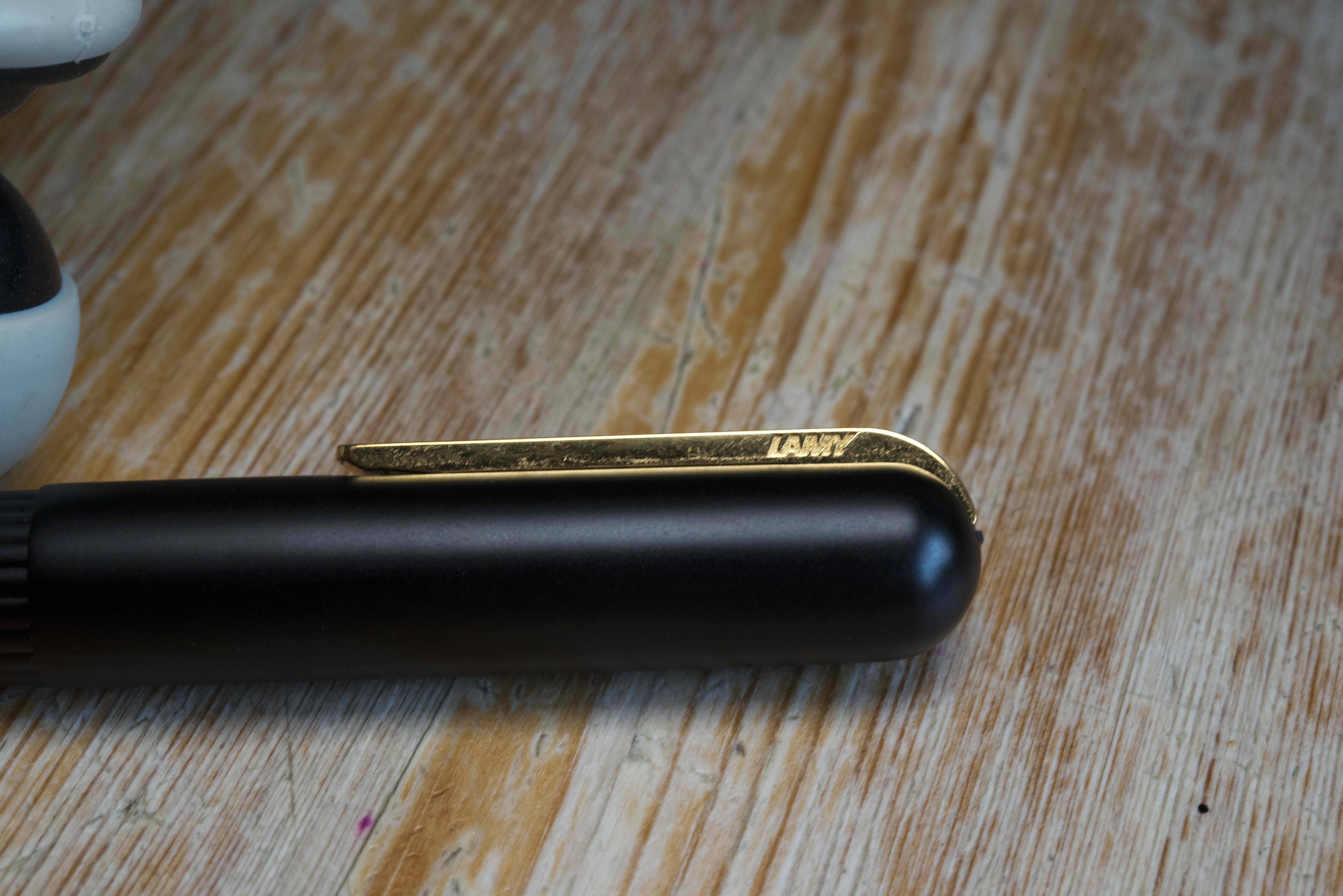 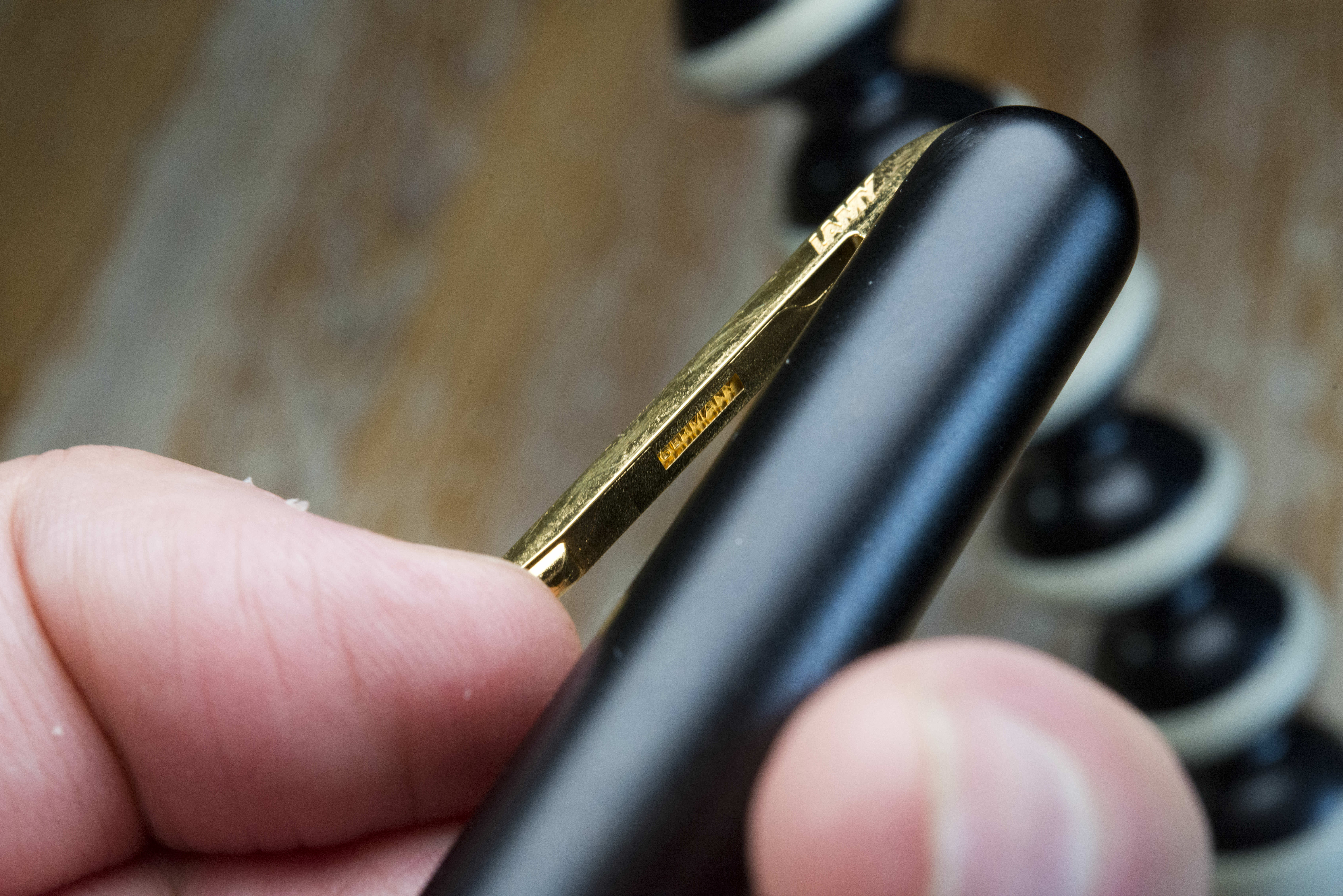 The body and cap are both (I believe) galvanised steel.  The cap is relatively light and plastic lined behind the threads.  The barrel is heavy.  The section is plastic, but does not feel cheap.  The threads for closing the cap are on the barrel, not the nib section and feel smooth, almost non-distinct, though this can cause a problem when capping.  The pen is very comfortable to use, and feels balanced in the hand.  It is, however, quite heavy and so over time may become tiring to use.  So far this has not been an issue for me, but if you’re used to light pens this could be problematic. 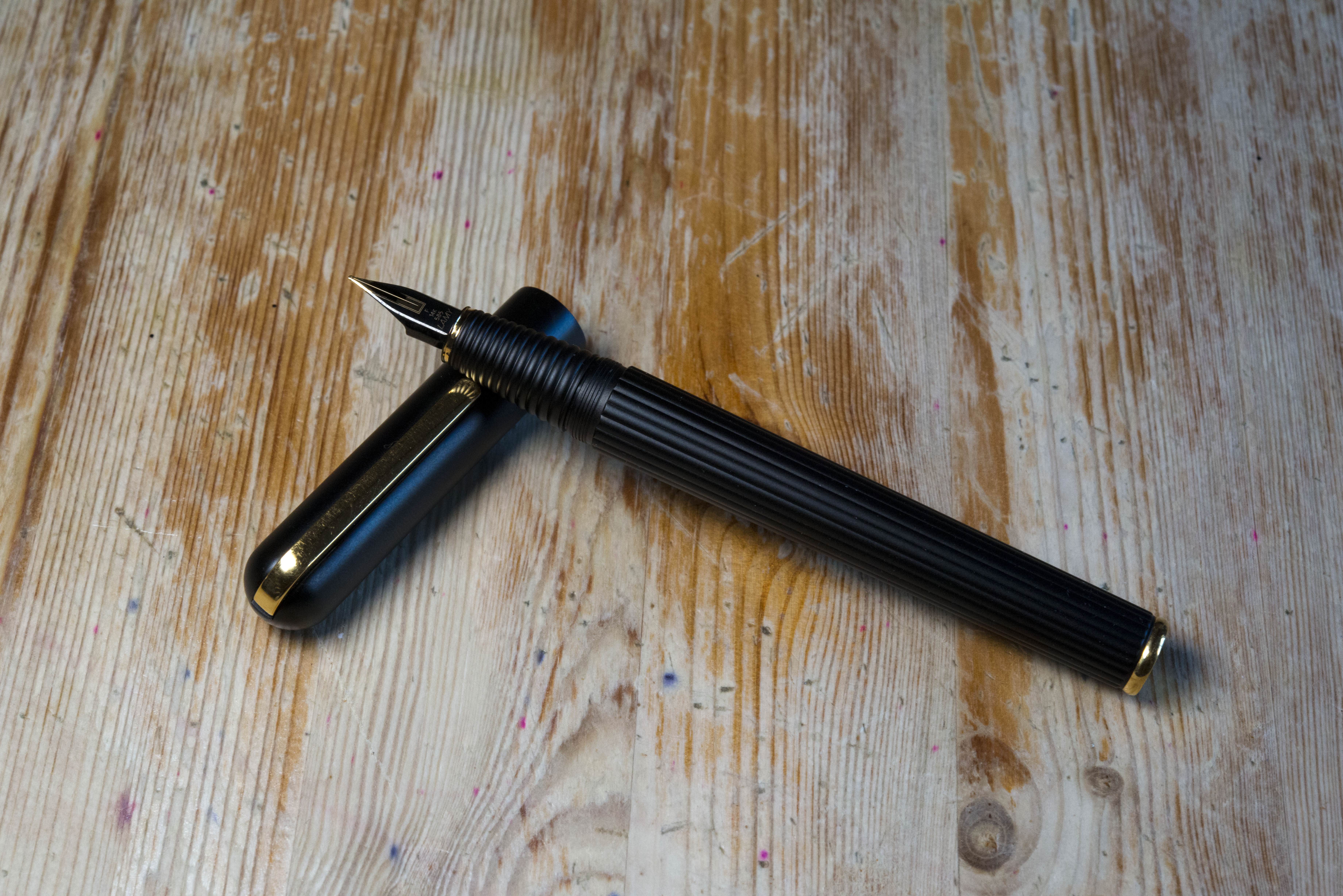 The cap posts positively, but for me does unbalance the pen and makes it quite back heavy.  Being quite a long pen (similar length uncapped to an oversized Visconti Homosapiens), there is no real need to post and personally I prefer not to anyway.

Capping the pen can be problematic though there is an easy way round this.  Those fine threads which help make the pen comfortable to hold are matched by fine in-cap threads.  This can result in two issues.  First, if some one is not aware it’s a screw cap, it is possible for them to ‘pop’ the cap on.  Second, when screwing the cap on it can be easy to cross thread.  With both inner and outer threads being steel, there should be no damage, but it’s annoying and could wear a new grove promoting further cross-threading over time.  The fix is simple.  Start by rotating the cap as if opening it, then twist in the other direction to securely close.  From what I understand, the same issue existed with the original Persona.

The writing experience is very enjoyable.  Lamy gold nibs are very different from their steel ones.  The latter are stiff, pencil like, and tend to write on the dry side, where as the gold nibs are slightly soft, springy, and wet.  My pen has a fine nib, which writes closer to a medium.  It can offer variation, though as with any nib, at risk.  Certainly a double width line can be easily obtained without risking the nib, but I’m not sure I’d like to go further.  The fluting on the barrel adds texture in a pleasing manner.  The ribbing on the section is comfortable and gives the feeling of a secure hold.  Sweaty or oily fingers will not be an issue with this pen.  There is a very small step behind the threads, but this is hard to notice. 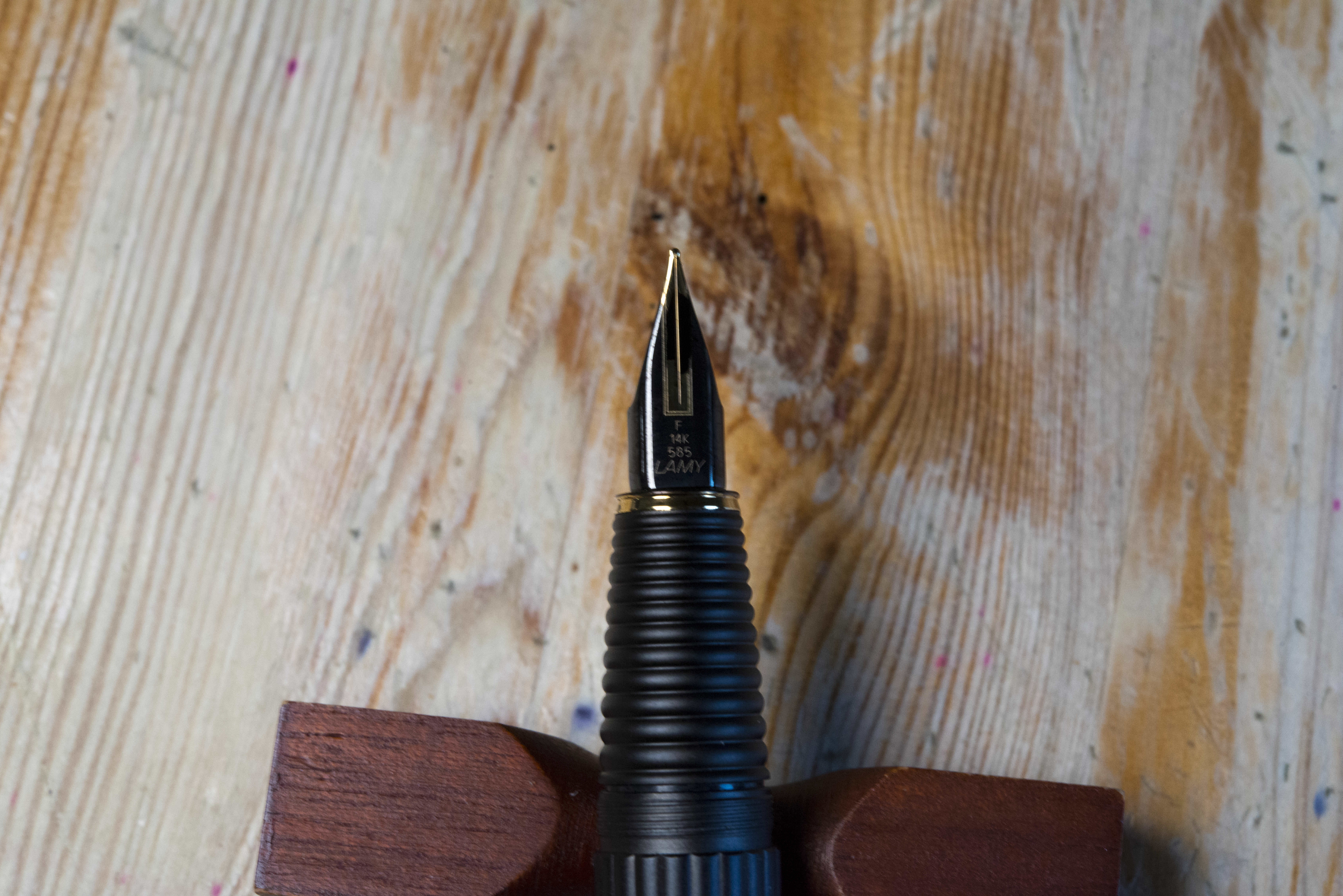 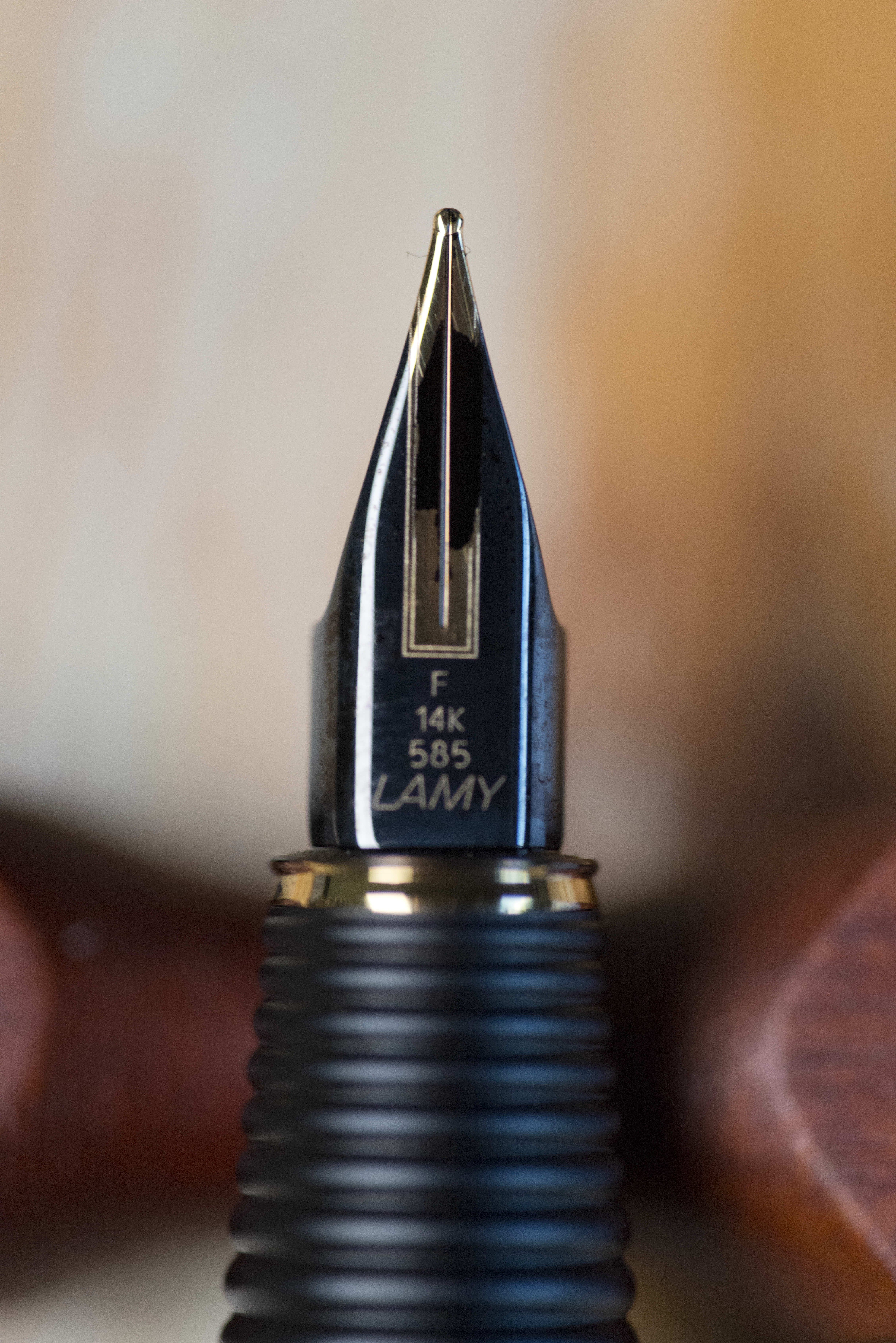 The filling system is Lamy’s proprietary cartridge/converter system.  This is reliable and works well.  The pen comes with a converter in place as well as a pack Lamy blue cartridges.  While this may not have the capacity of a piston or vac filler system, it does make the pen easy to clean and maintain.  I have also noticed very little in the way of evaporation over time. 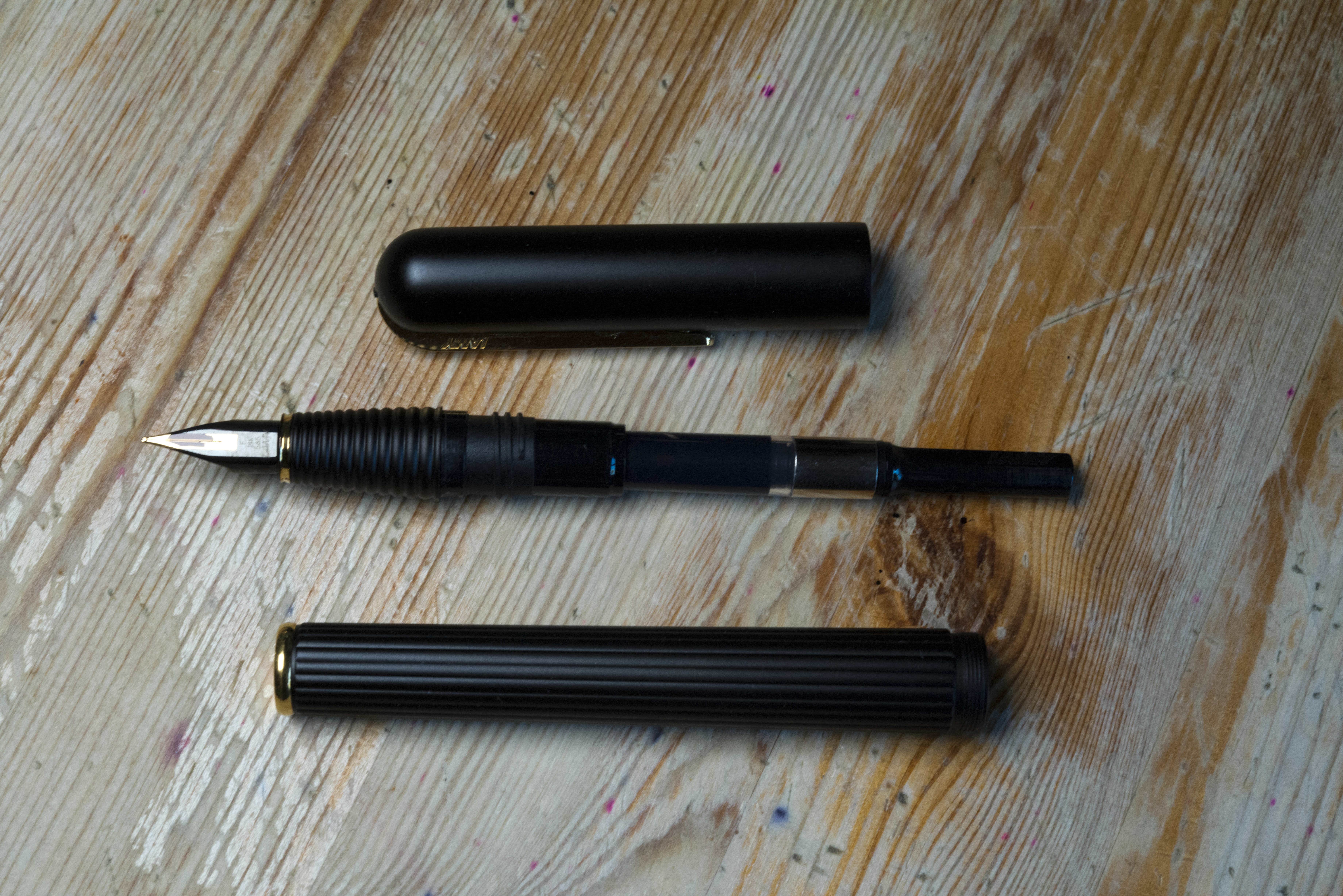 Packaging varies with Lamy, both with time and with region .  When I got mine it came in the square hinged box, but the version that does not include a bottle of ink.  The box was wrapped in tissue paper and in a plain white cardboard box. 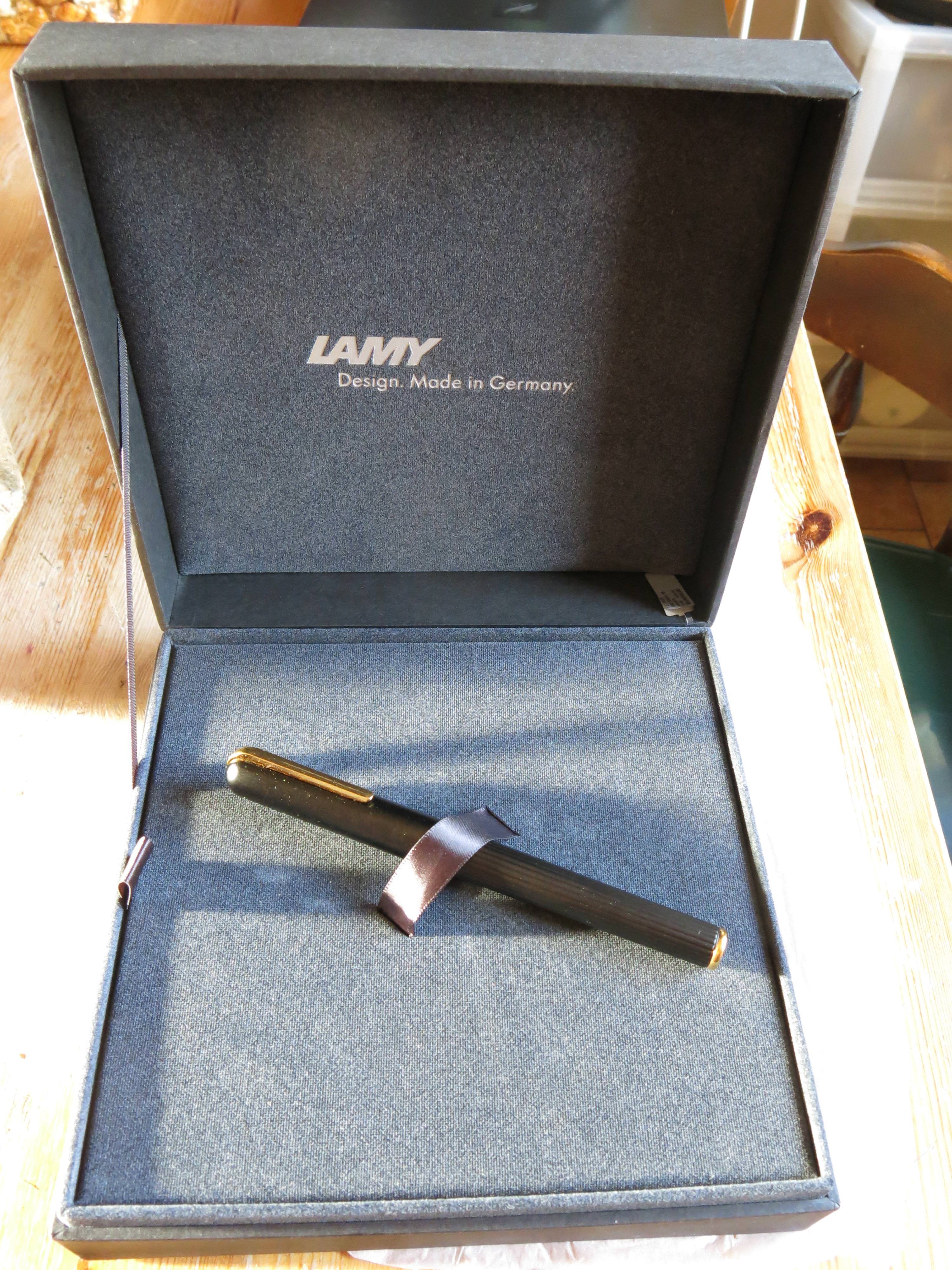 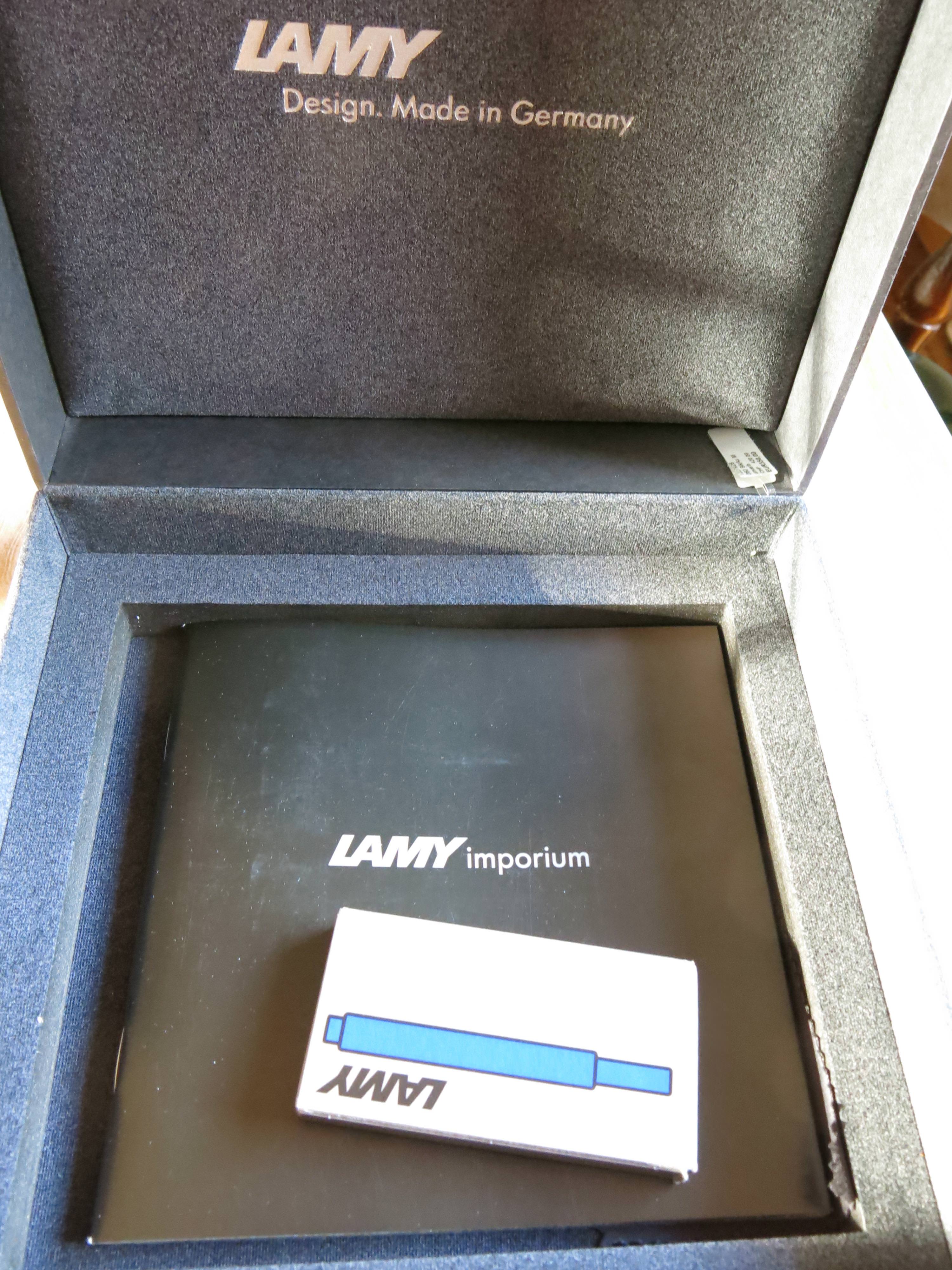 Cost brings about an interesting question.  In the UK it retails for just over £300, though some shops sell it for as low as £240.  In Europe it is slightly more expensive at €385.  In the USA, however,  is appears to go for between $440 and $550.  Why it is so expensive in the USA and Canada I’m not sure.  I believe it was only available from a limited number of retailers before Lamy switched distributors and suspect it may have been priced to rival the Pelikan M800, which until recently was overly expensive across the ‘pond’.  As I’m UK based, would I pay £300 for this pen?  Well I didn’t, I got it in a sale at a very good price, but do I feel it is worth £300 or even €385?  Yes.  Lamy may be associated with lower end pens, but this is a worthy straight rival for a Pelikan M800, Montblanc 146, or Graf von Faber Castell Classic, which all start around £350 (before discounts/sale prices) and rise rapidly.

Please note this pen was bought with my own money around a year and a half ago.  Since then it has only been inked with Lamy black, and only for the reason I like the ink and the pen has been in my daily carry at work ever since as my black ink pen.