While the 2000 and Safari may be considered Lamy’s seminal models, and the 27 their first big break under the Lamy brand name, the Persona was arguably their first attempt at a high end pen to rival those from Pelikan and Montblanc.  Launched in 1990 and designed by Mario Bellini, who was better know for his automotive work, it went through two updates before being dropped in 2010 having sold some 10,000 units per year at its peak.  To Lamy it was considered a hobby or vanity model, a lost leader to show what they could do.  In 2015 it was brought back as a new, slightly different model, the Imporium.

From my previous review of the Imporium the regular reader will know I am a fan and it is the only pen that has never been replaced from my daily carry set for work.  As a result when I first heard about the Persona I was intrigued, and then determined to pick one up, ideally in the same black and gold presentation as with my Imporium.  The only problems being rarity and cost.  Around 2017 I had the option of one at a good price but dithered and lost contact with the seller.  Over time I would find the occasional one, not always in the colour combination I desired, but always at twice the price or more of what I was willing to pay.  It was only by luck that in February this year I was re-introduced to the original seller, who still had the pen and still wanted the same money for it.  Result.  For both of us, as I then bought three more pens off him including the Stiplula Faceted Etruria Alter Ego I recently reviewed.

I’m not going to provide a full review here, but more a comparison between the Persona and the Imporium.  Note  there are three versions of the Persona.  First with an 18k gold nib, second with the addition of a roll stop bump placed on the clip, and third with the nib being replaced with a 14k unit, though still the original shape, not the modern Z57 as found on the Imporium.  This pen is from the first tranche with the 18k nib and the ability to accelerate away on even the gentlest of slopes. 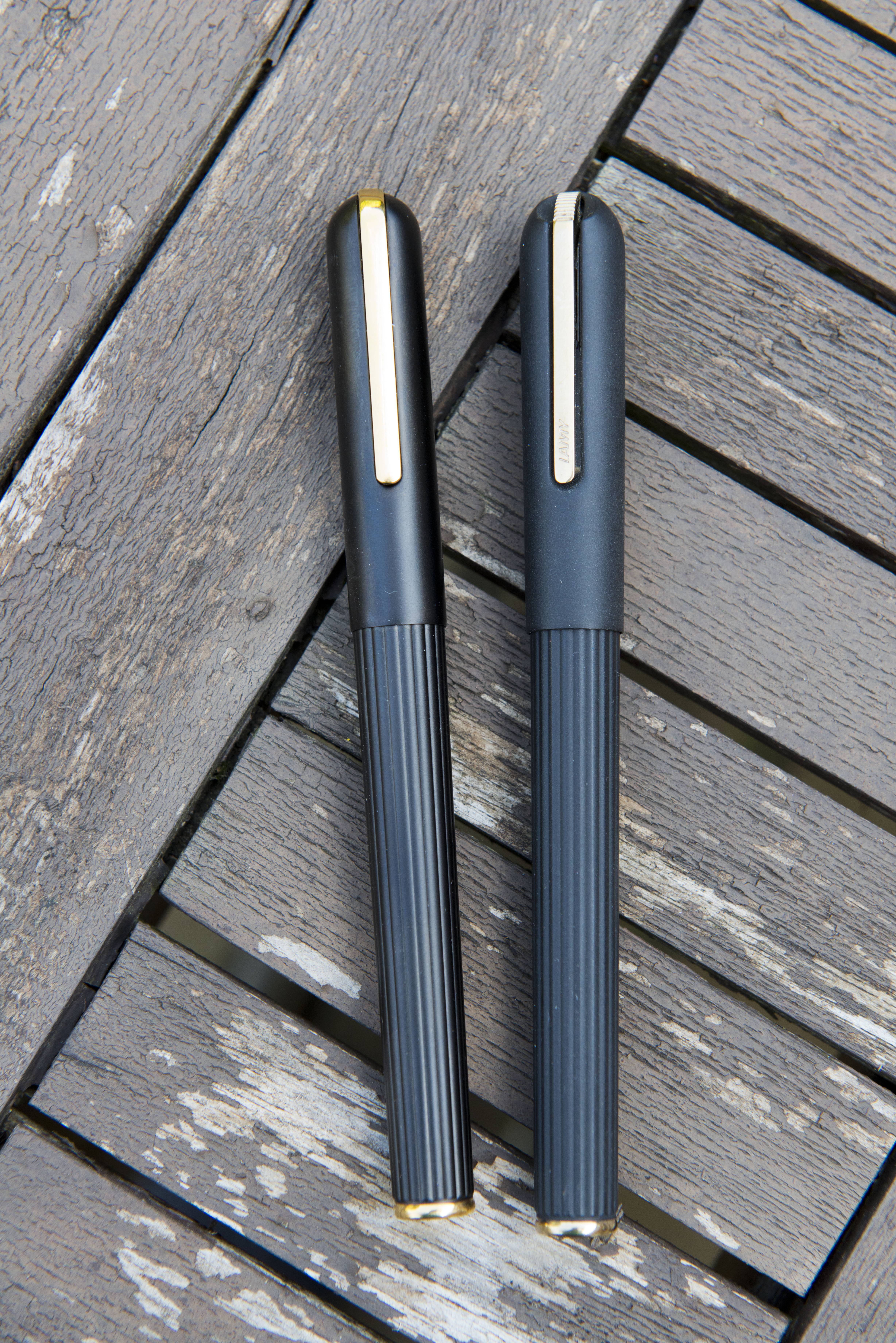 While in theory the look of the Imporium is the same as the Persona, in reality no two parts are exchangeable with the exception of the converter, and even then this is only because the Persona can use the present model, not the reverse, as the original is threaded. 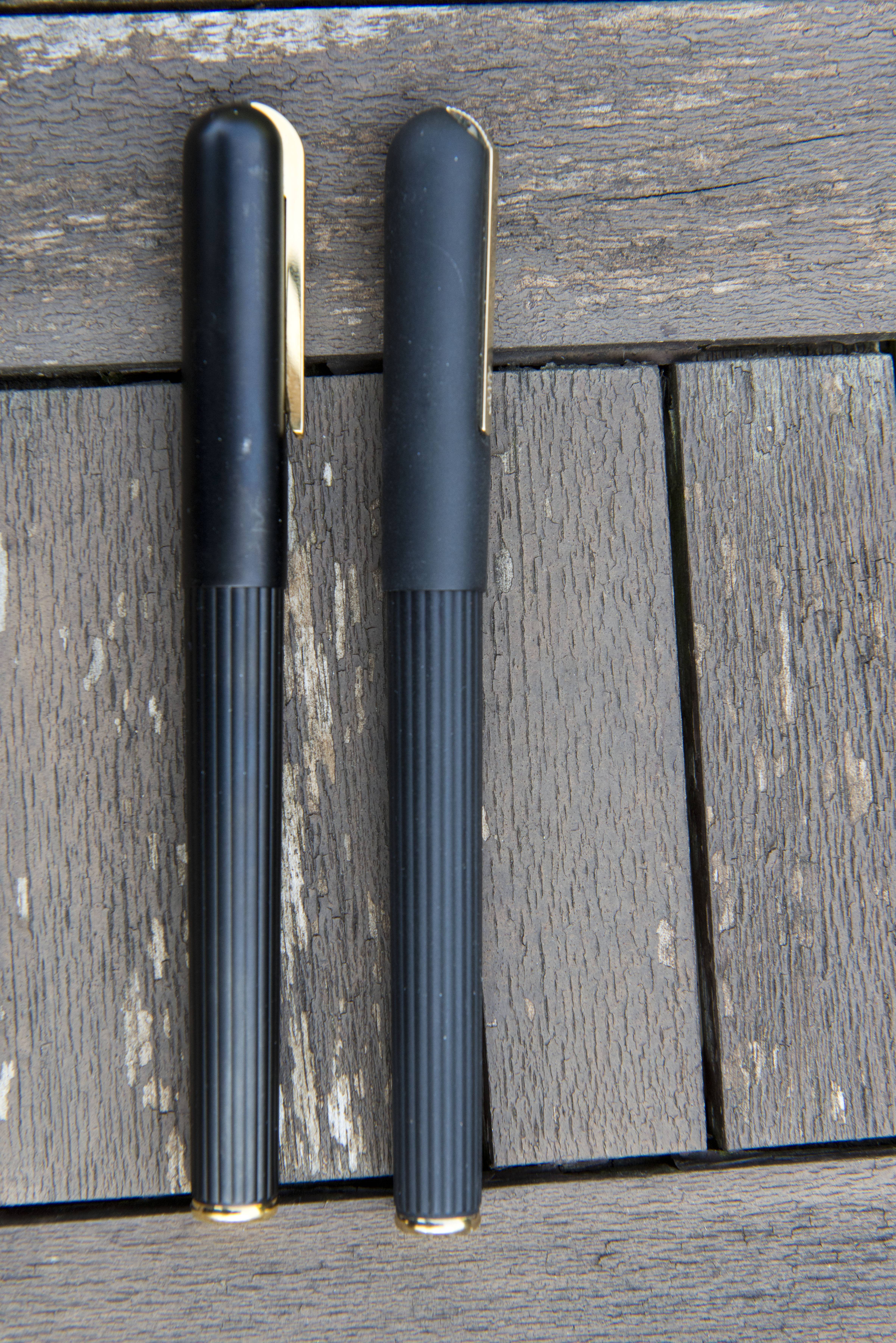 (up to now the Imporium is on the left, the Persona is on the right, this is switched in the remaining photos)

The most obvious difference is the clip.  On the Persona it is flush with the top edge textured.  You push here and the clip will slide up and out. 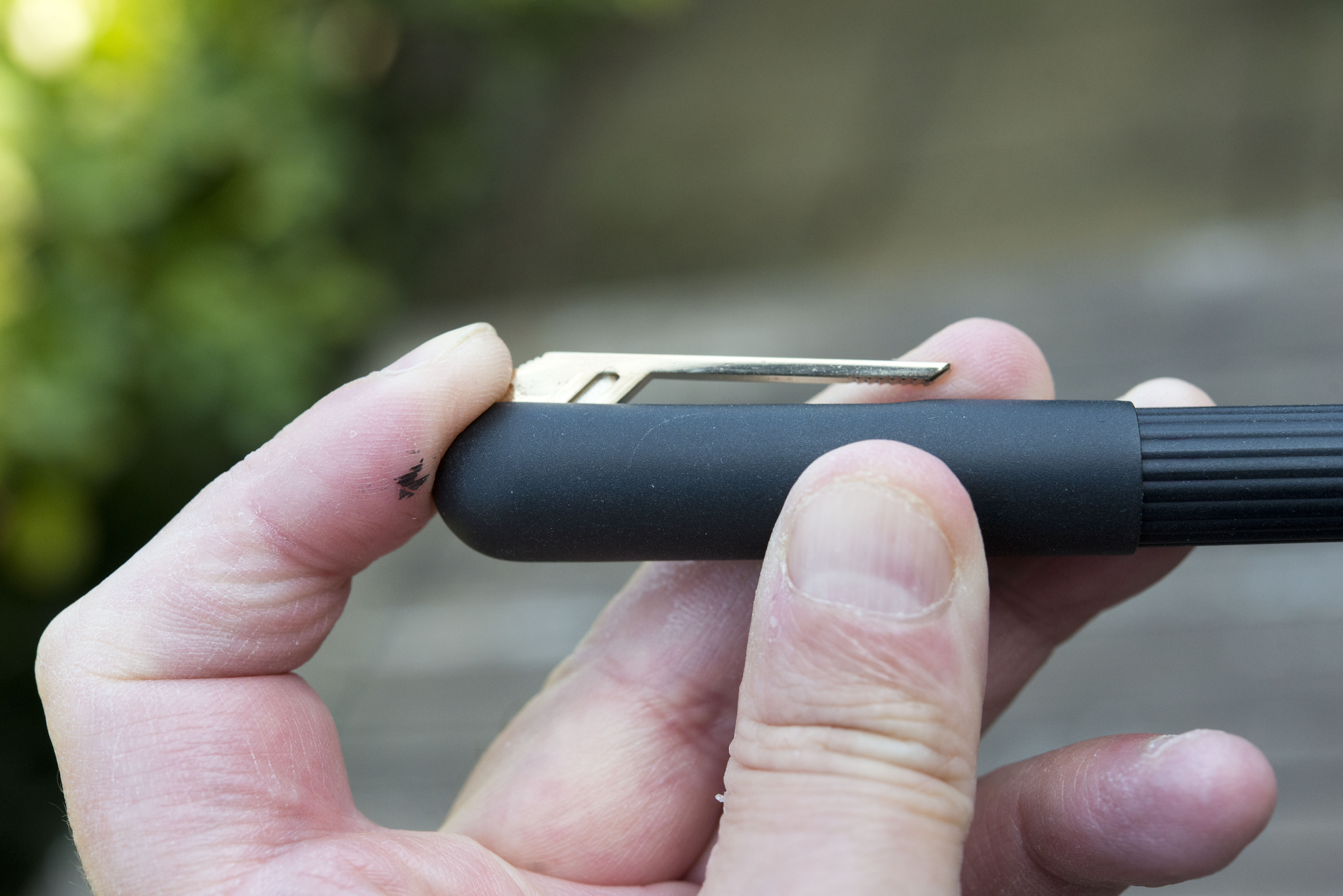 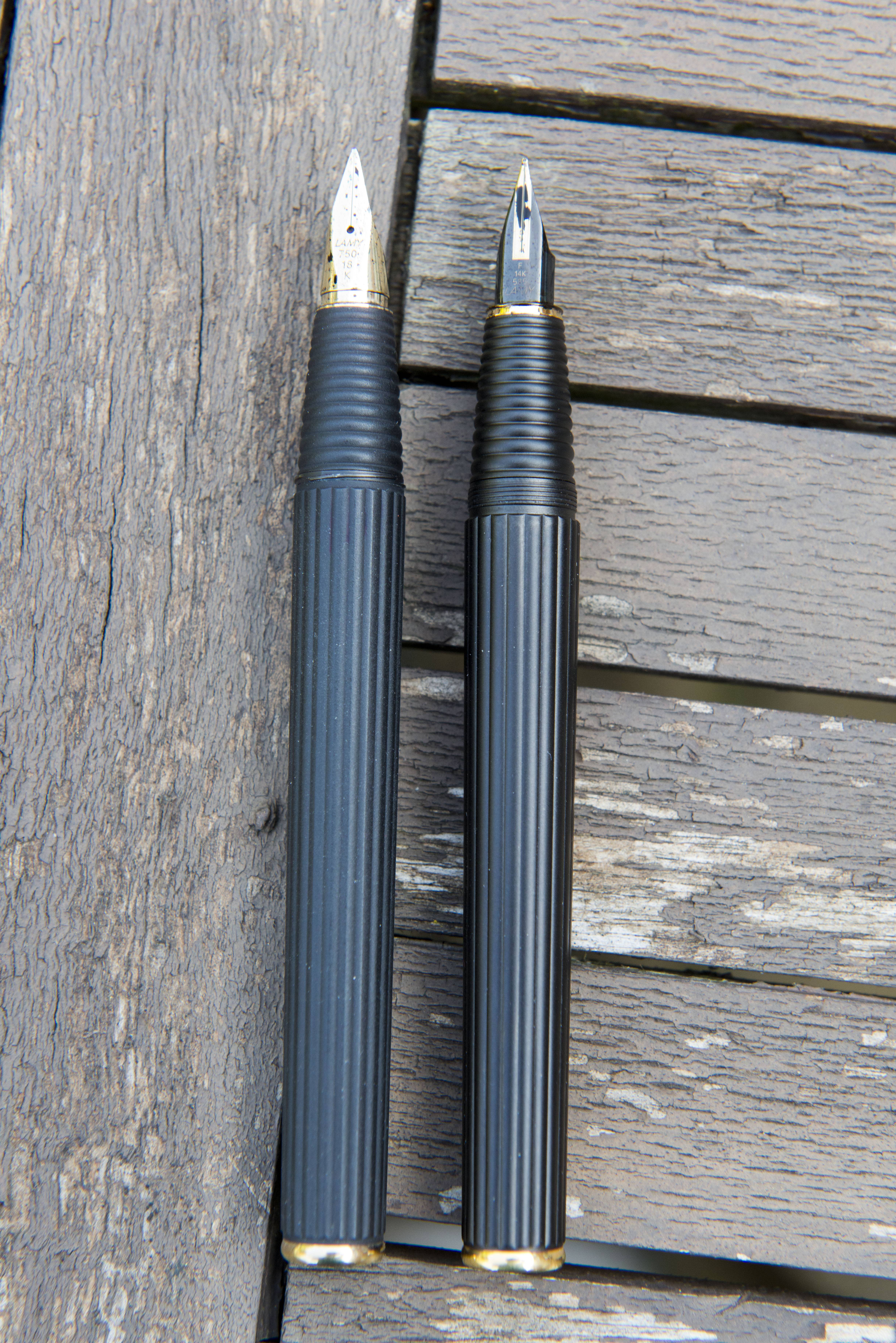 Size wise the Persona is a slightly bigger pen and has the marginally larger cap, however the grip section on the Imporium is longer and to me is slightly more comfortable.  You will note the latter has a far larger set of cap threads, possibly for a better sealing of the pen, though from experience it is actually the worse of the two for the infamous cross-threading issue.  It takes under half a turn to remove the cap on the Persona compared to over 1.75 rotations on the Imporium. 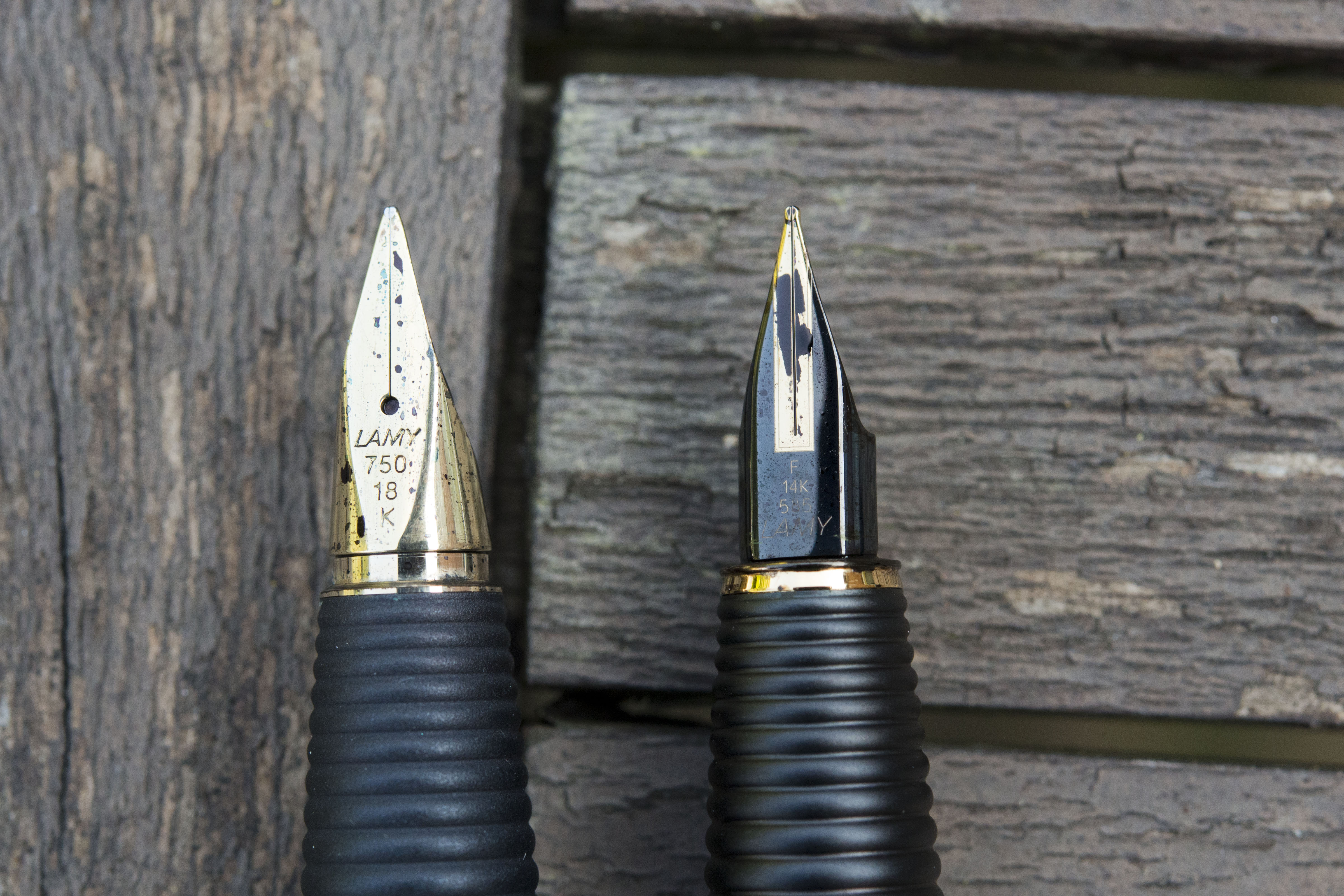 The nibs are the biggest noticeable difference.  When the Persona was designed the eponymous Z50 steel nib was already out and in heavy use, however there was no gold equivalent and so a unique design was made specifically for the pen and looking like an extension of the body.  By the time the Imporium came out the Z55 was already available as a Z50 upgrade option, plus as standard on some special and limited edition models.  As a mark of being a flagship product, a variation without a breather hole was created for the Imporium, the Z56/Z57 – the former rhodium plated around the central gold stretch (as with the Z55) the latter black PVD finished (and the version on my pen).  I’m honestly not sure which I prefer and have just done a back to back writing test (with very scruffy writing so won’t be shown here 😉 ) and the nibs are very different.  This is to be expected as they are of different designs and different gold content.  The modern nib is wetter and gives more bounce, the Persona one is smoother but also more pencil like.  I think I prefer the Imporium nib slightly more though I do write slightly better with the Persona.  It would be interesting to see how an 18k nibbed Persona writes – I will try and pick one up in time, but not for silly money.

As can be seen in the next set of photos there are always slight differences between the two.  Arguably the Persona (on the left in these photos) is the better made pen with more attention to detail. 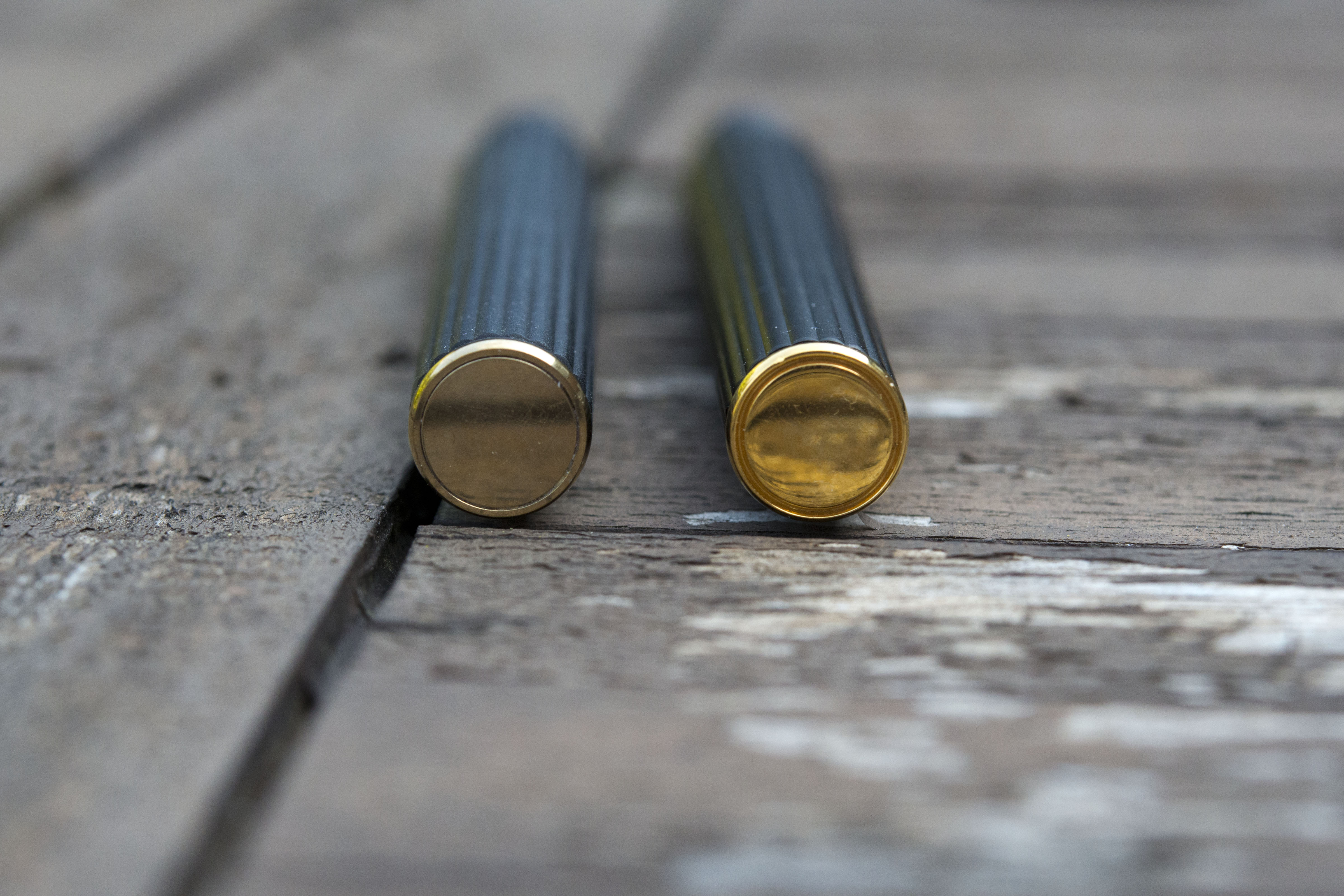 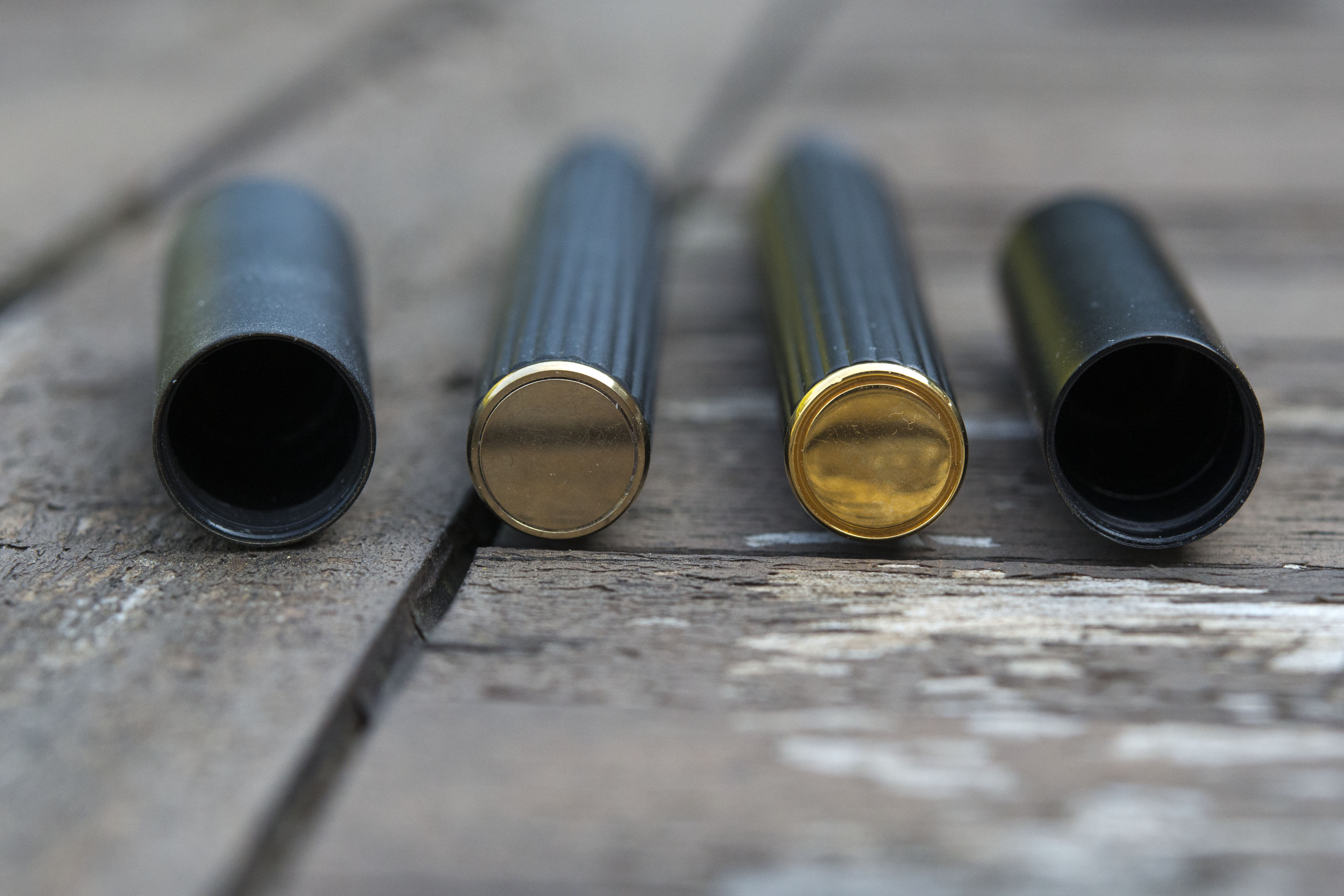 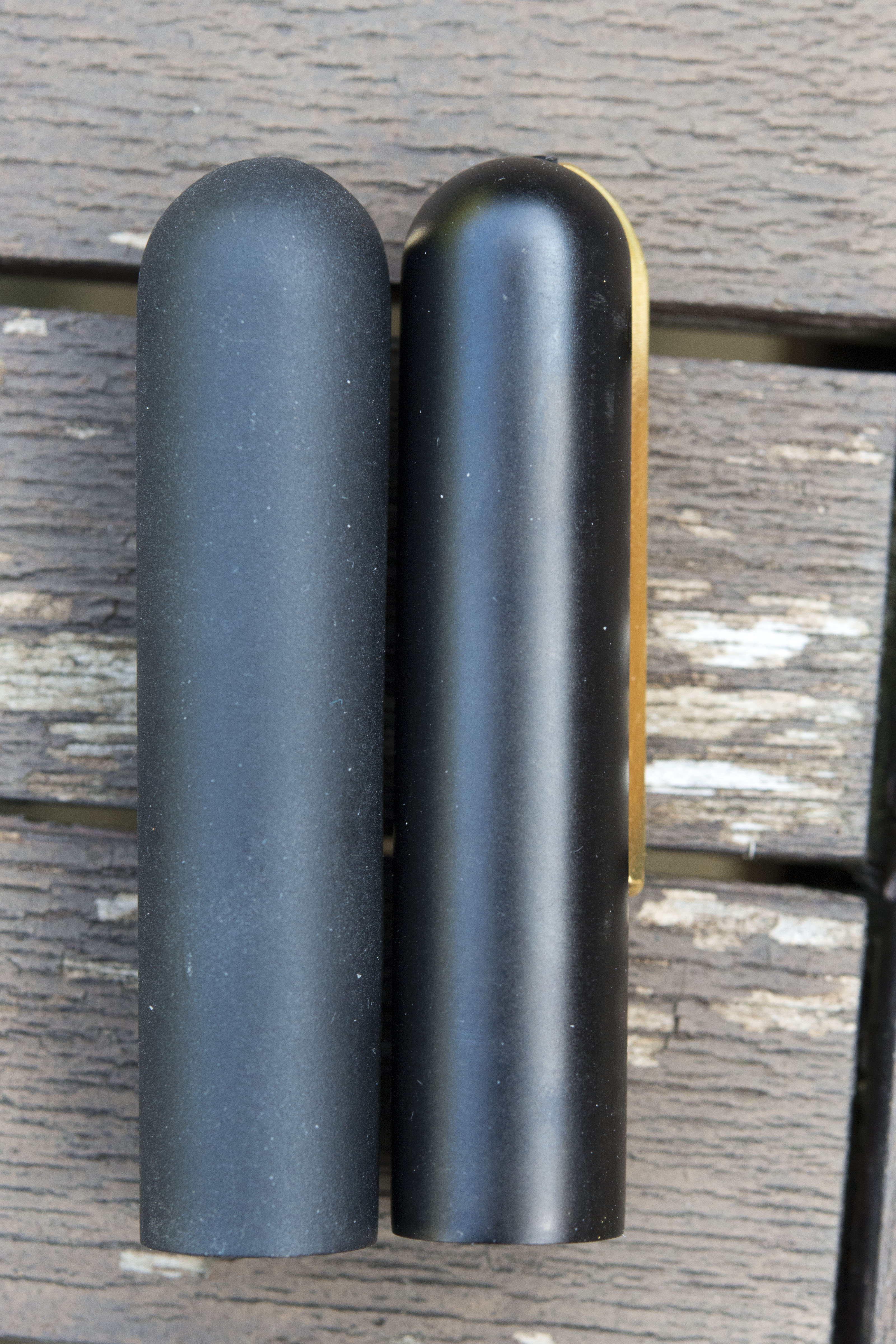 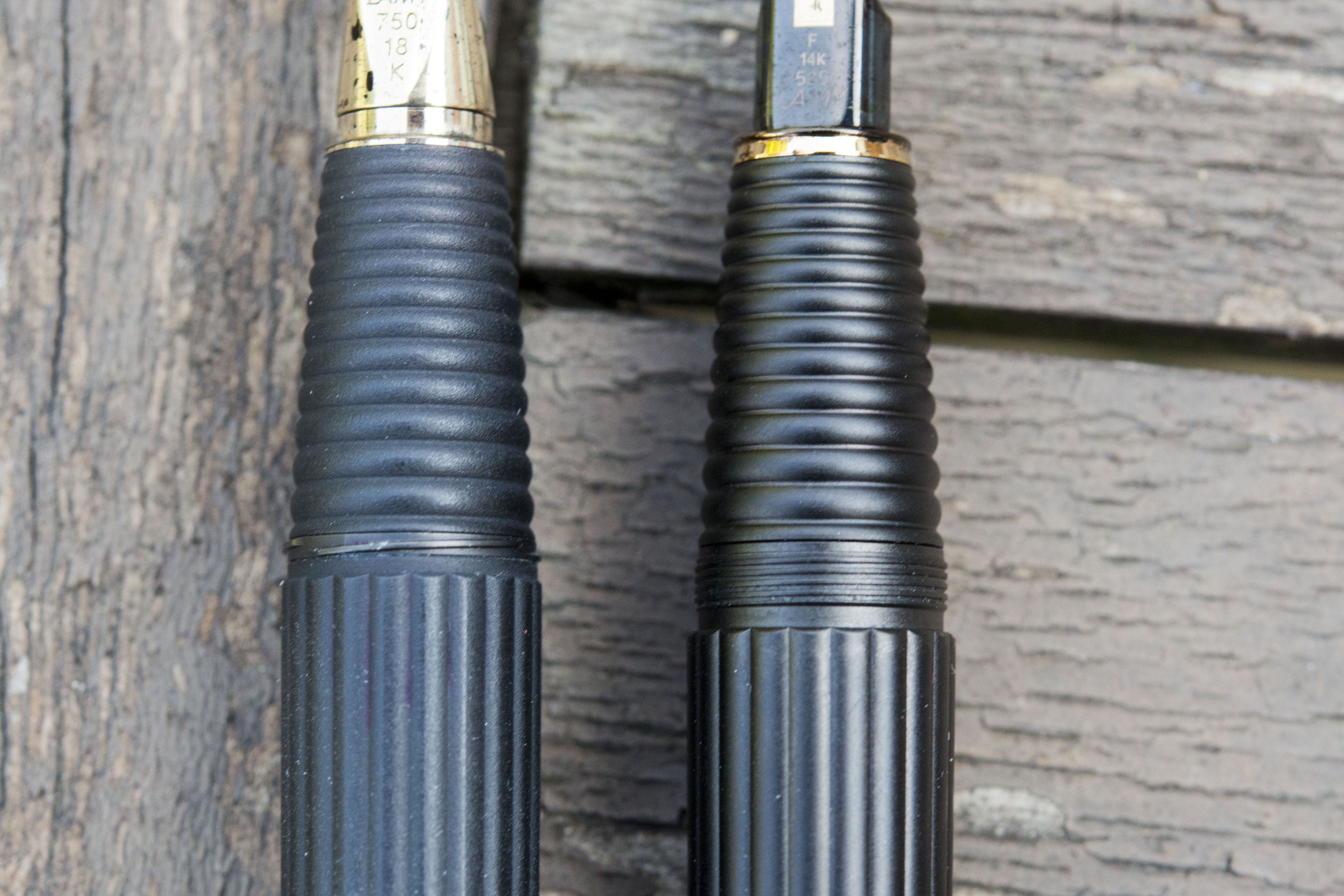 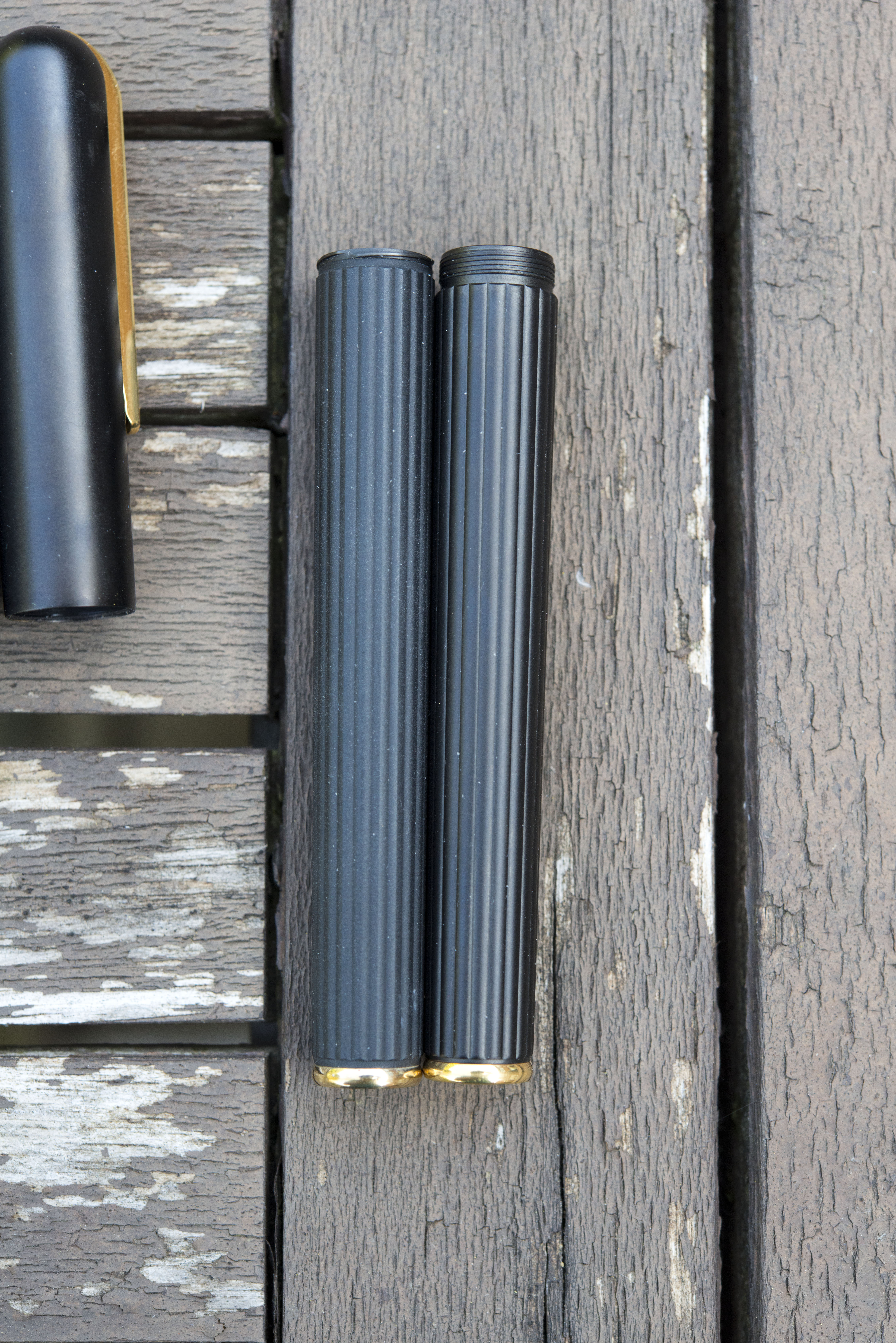 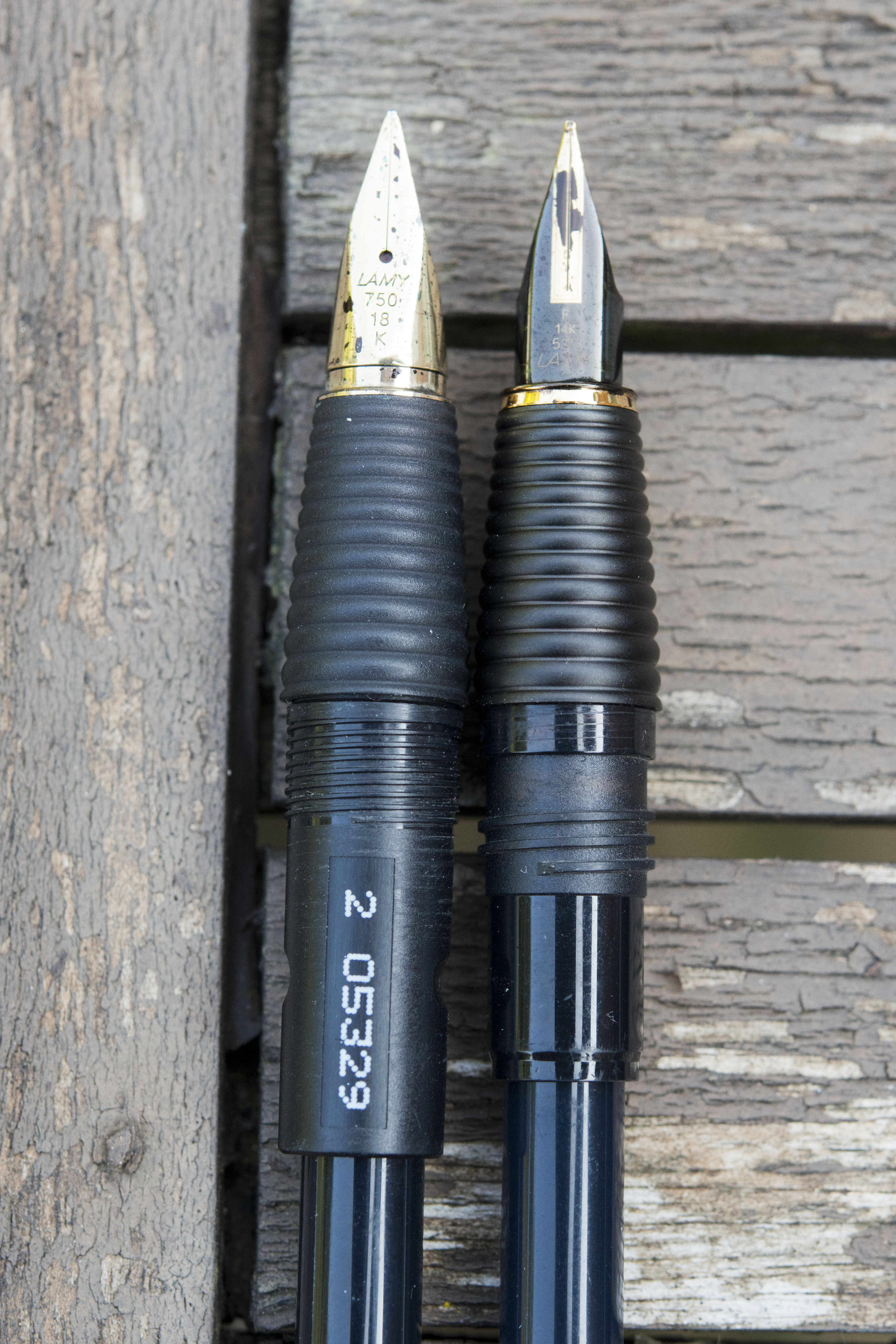 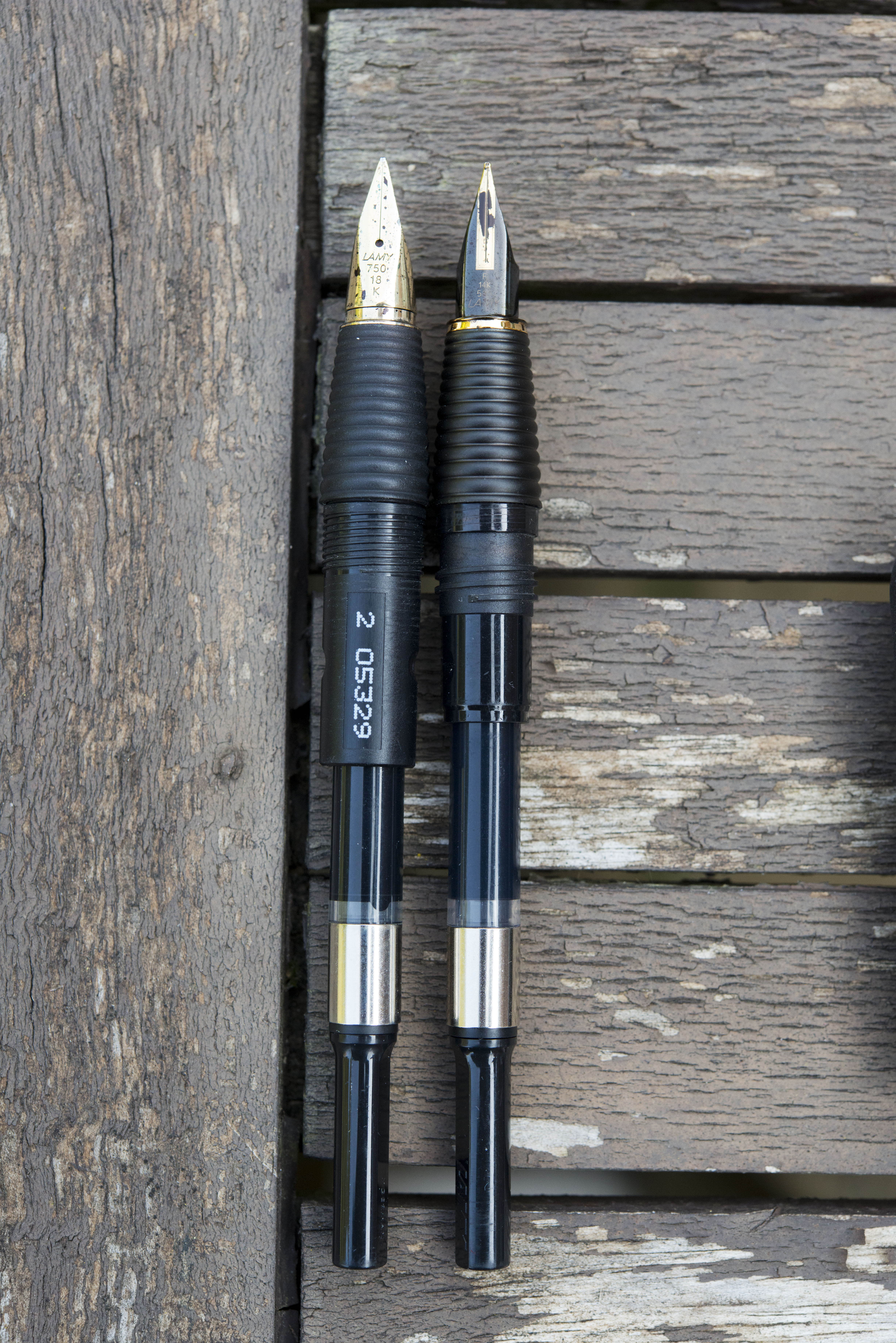 From the last couple of photos you can see the section threads are actually longer on the Persona (a reverse to the cap) though the barrel does feel more secure with the Imporium.  The converter well is also deeper, probably to house the threaded converter Lamy used on some of its pens at the time.  From forum posts I believe the Z27 (and Z28) model will fit in the Persona, however the threads on the older converter should prevent it from fitting in the Imporium (I’ve not tried as both pens are inked).  I’m not sure what the number means on the Persona.  I assume the 05329 is the build count, though whether this series started at 00001 and if it included prototypes I do not know (feel free to let me know). 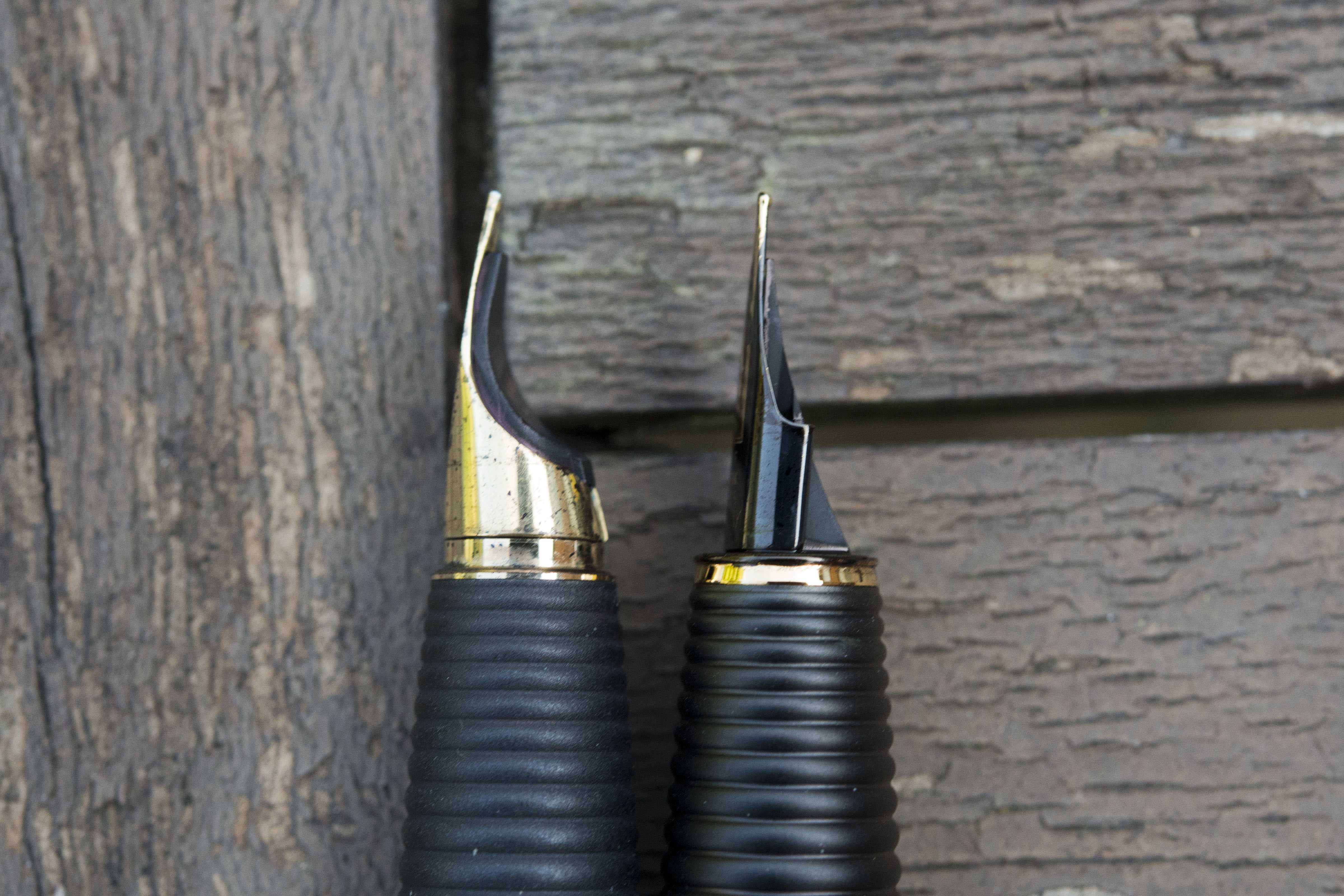 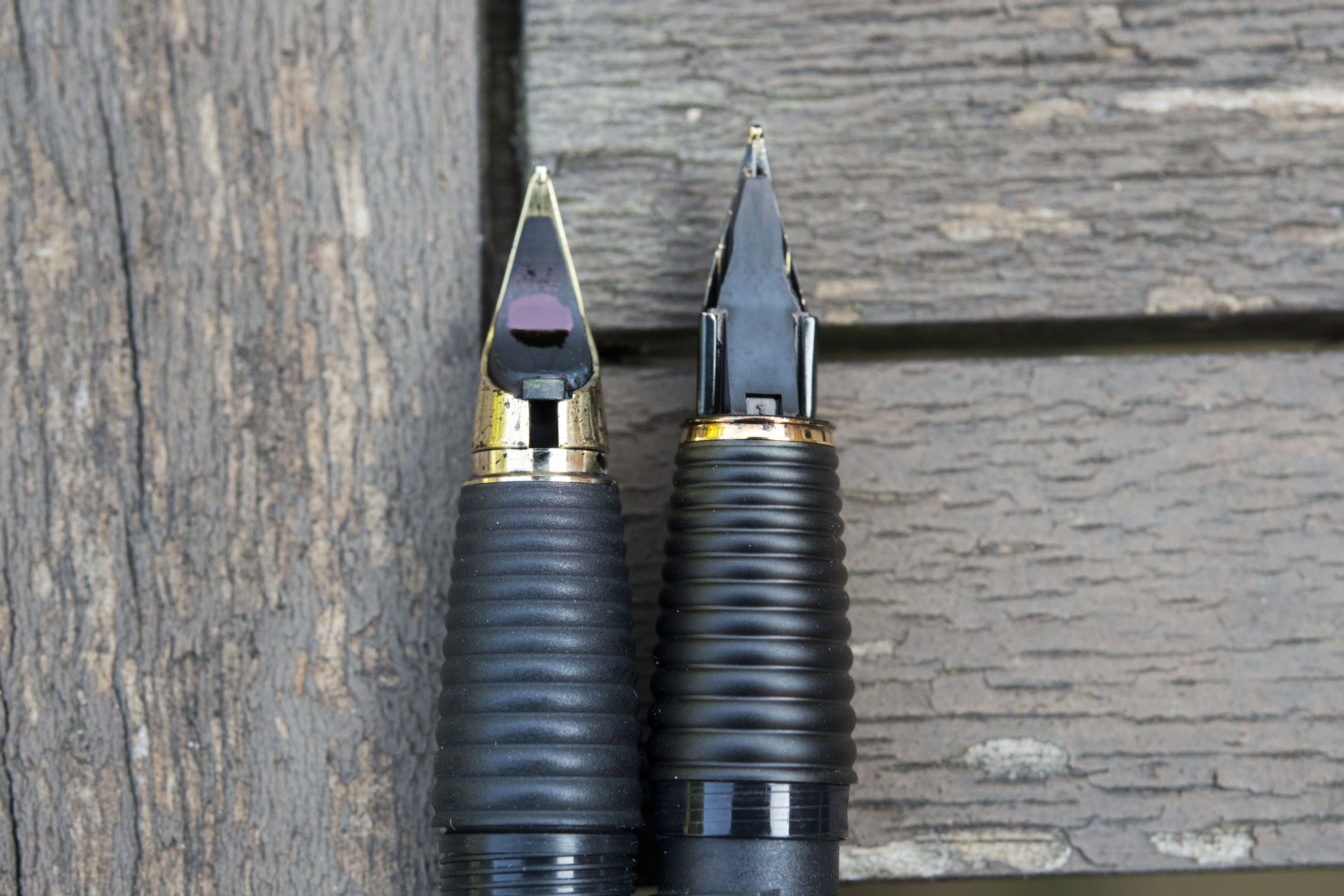 Again from the above you can see that the nib on the Persona looks like it is an extension from the rest of the pen with its tubular shape, where as on the Imporium it is just ‘stock Lamy’ though of an appropriate visual/proportional size. 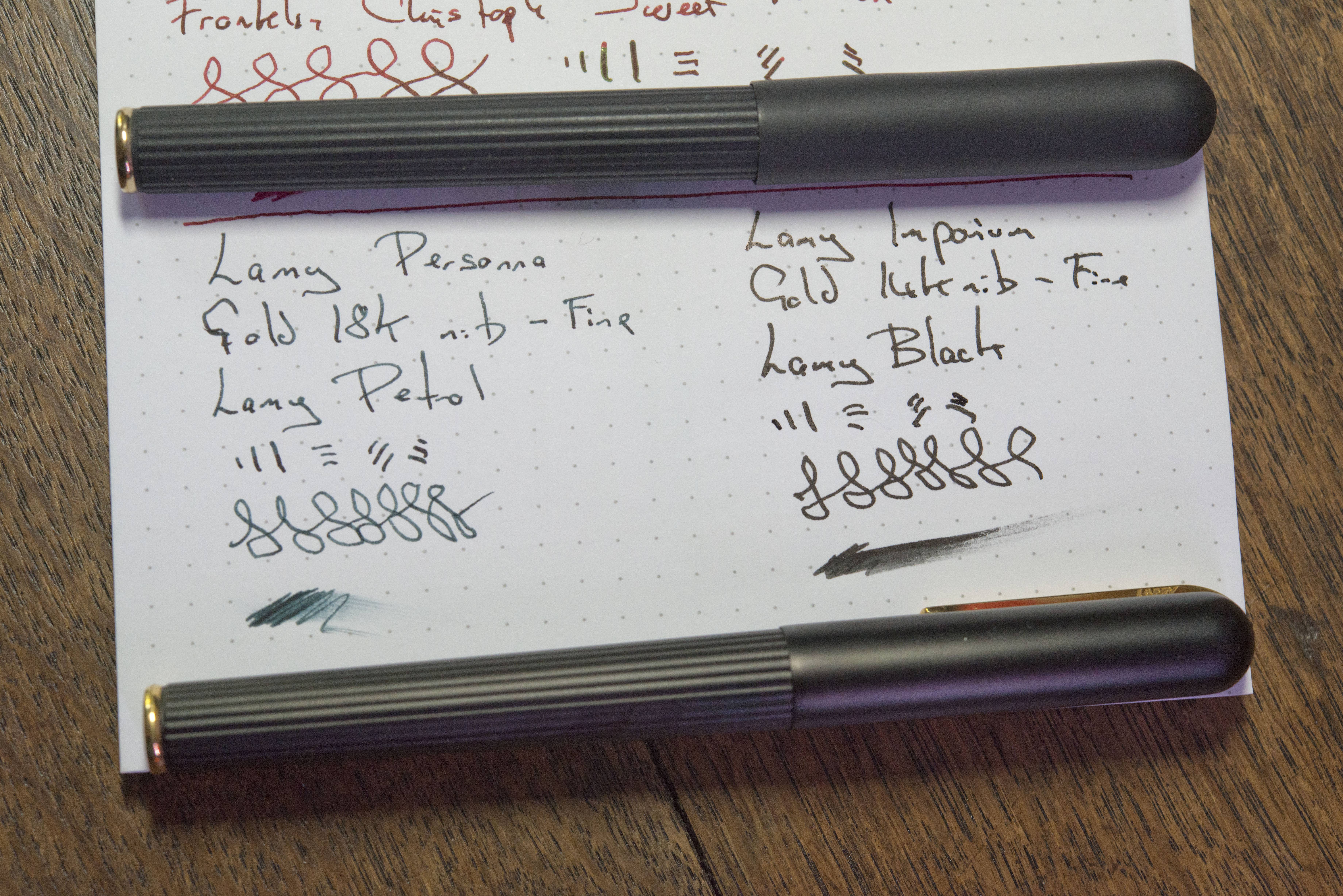