My daily carry rarely changes.  Even with three to four months between postings there are normally just one or two pens swapped in or out.  Things have changed however, as the pen case is left by my work bag, not by my computer, so with the present situation and full time working from home it is rarely touched.  Instead the assortment of pens on my desk have become my daily writers.  These are a mix of new pens, those I have queued up to review, those I’m too lazy to put away and still use, and then the one permanent resident. 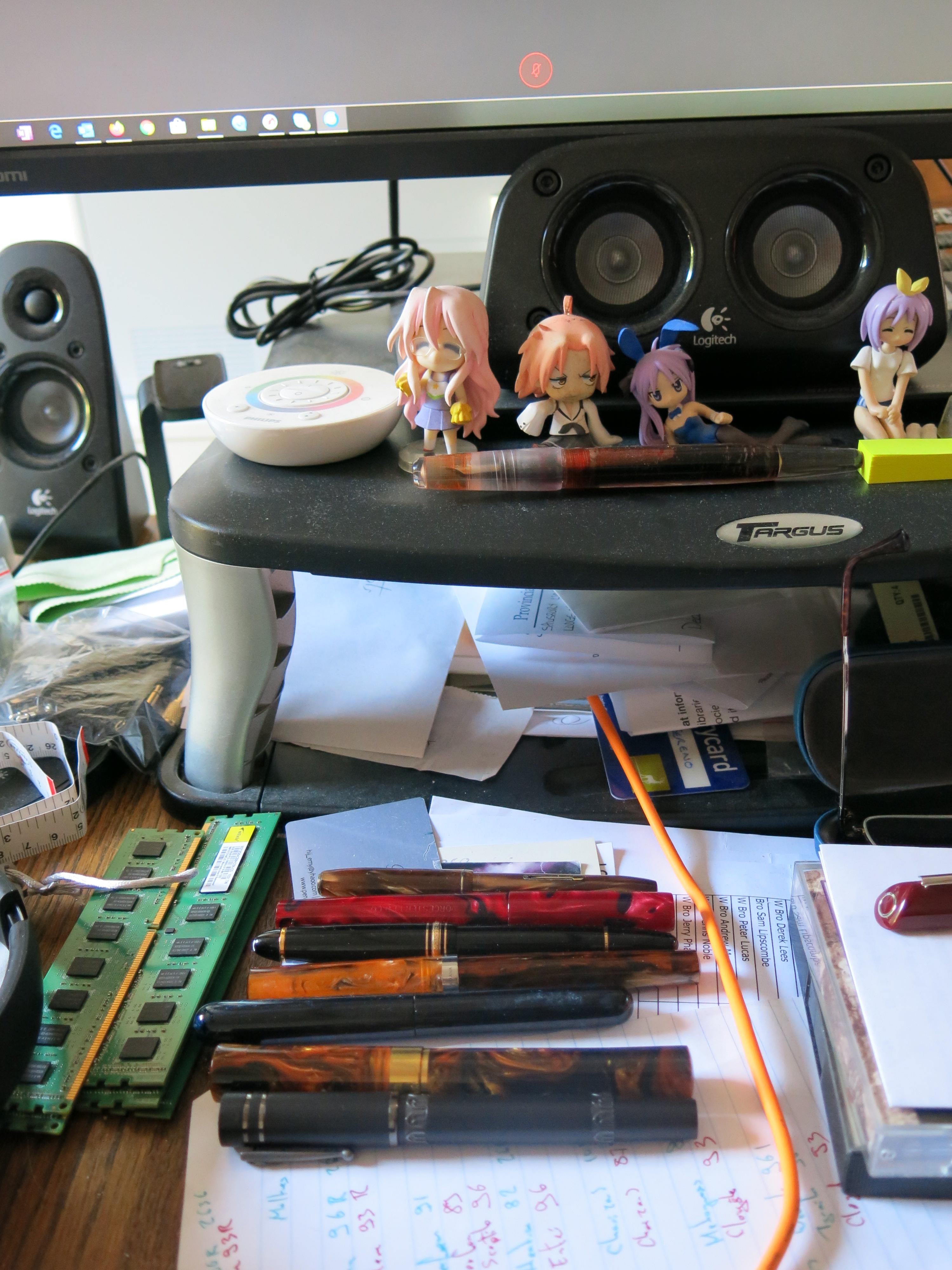 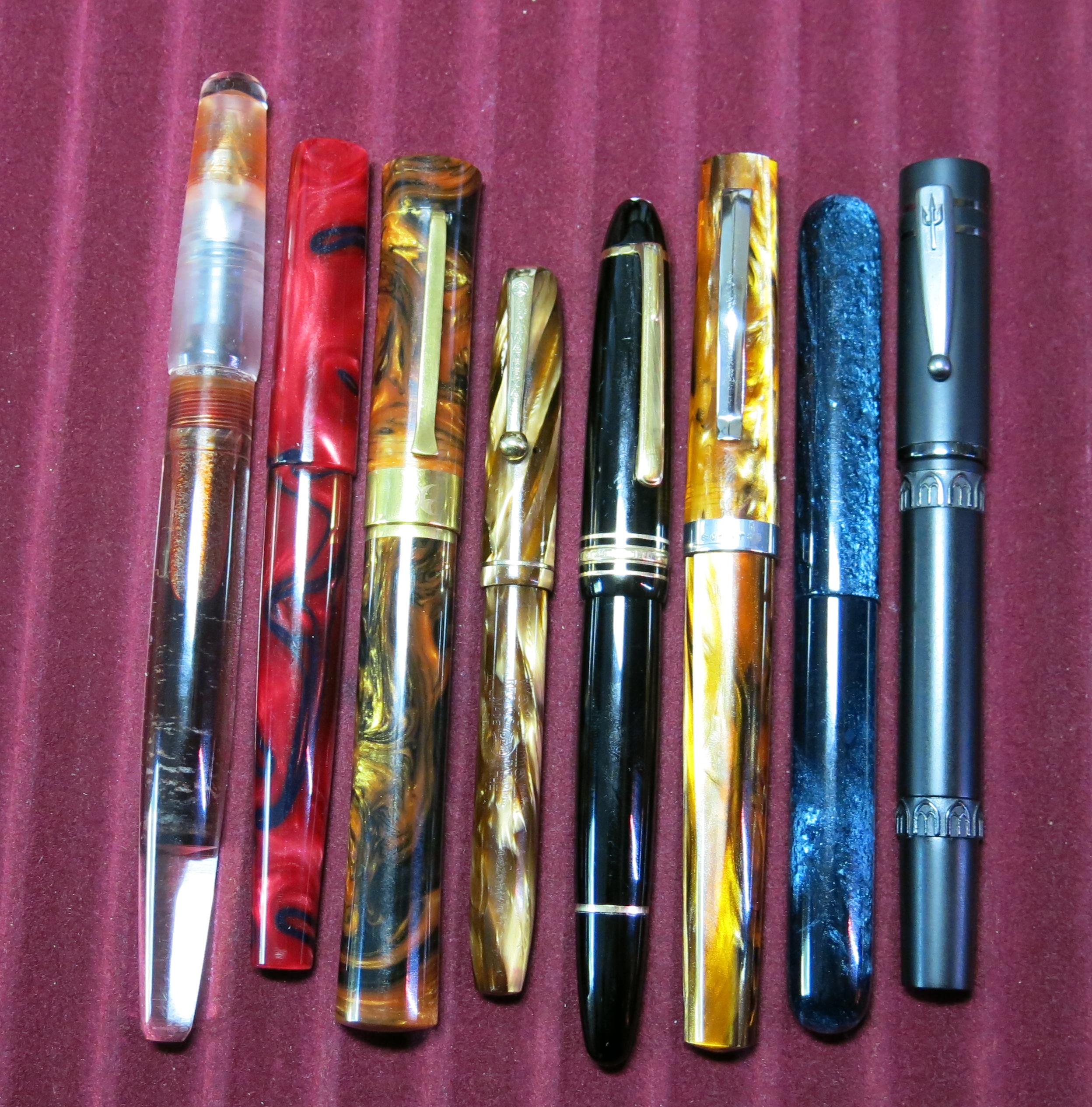 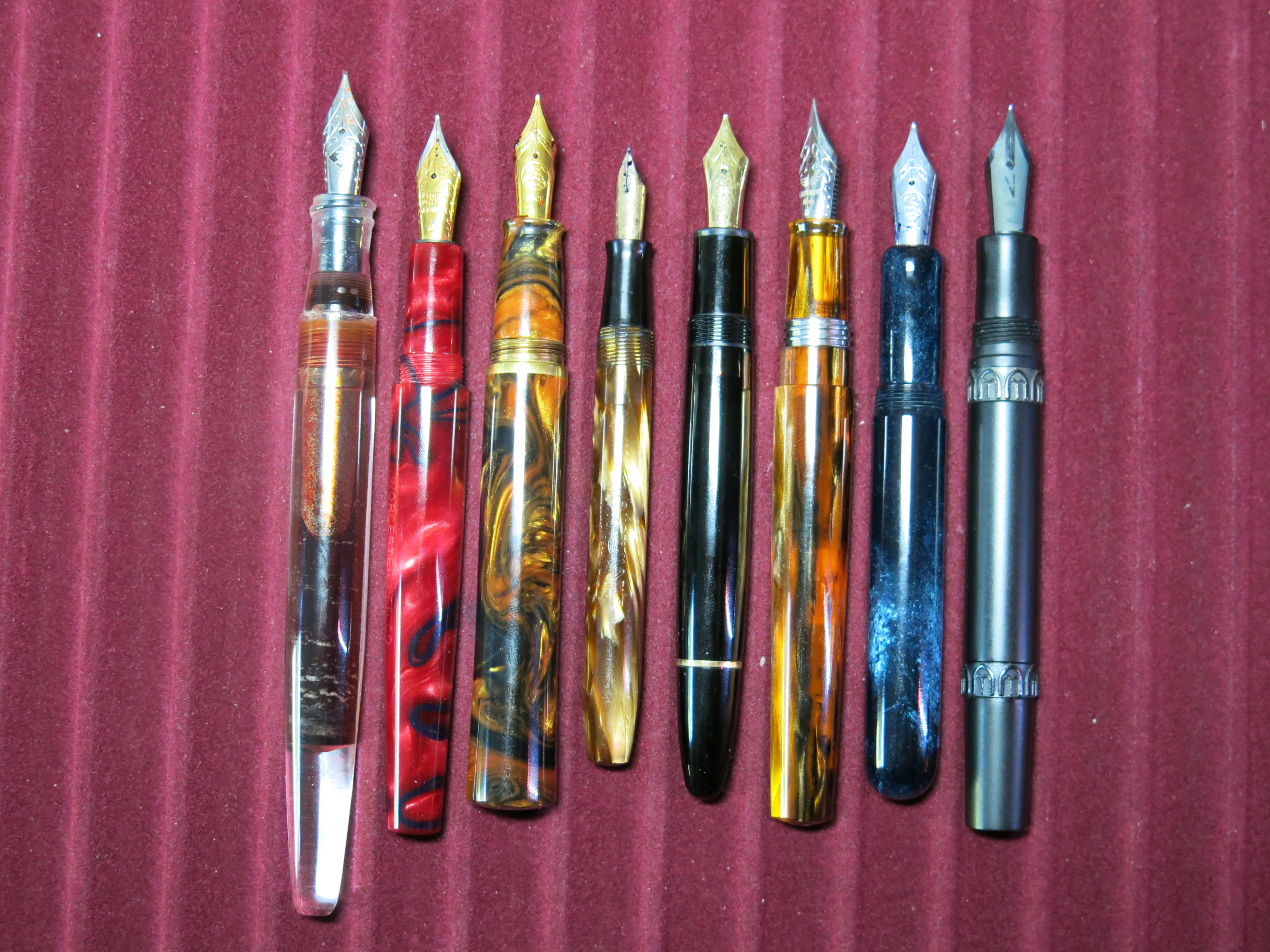 The new and review pens tend to be the same, though not always, especially if I’m going back in time to cover an interesting fountain pen I have owned for a while.  The lazy pens are either those I’ve reviewed and just decided to keep out as I still enjoy using them else I’ve brought them out of my pen drawers to look at or test and have inked and kept out.  The one permanent pen was actually bought specifically as a desk pen. 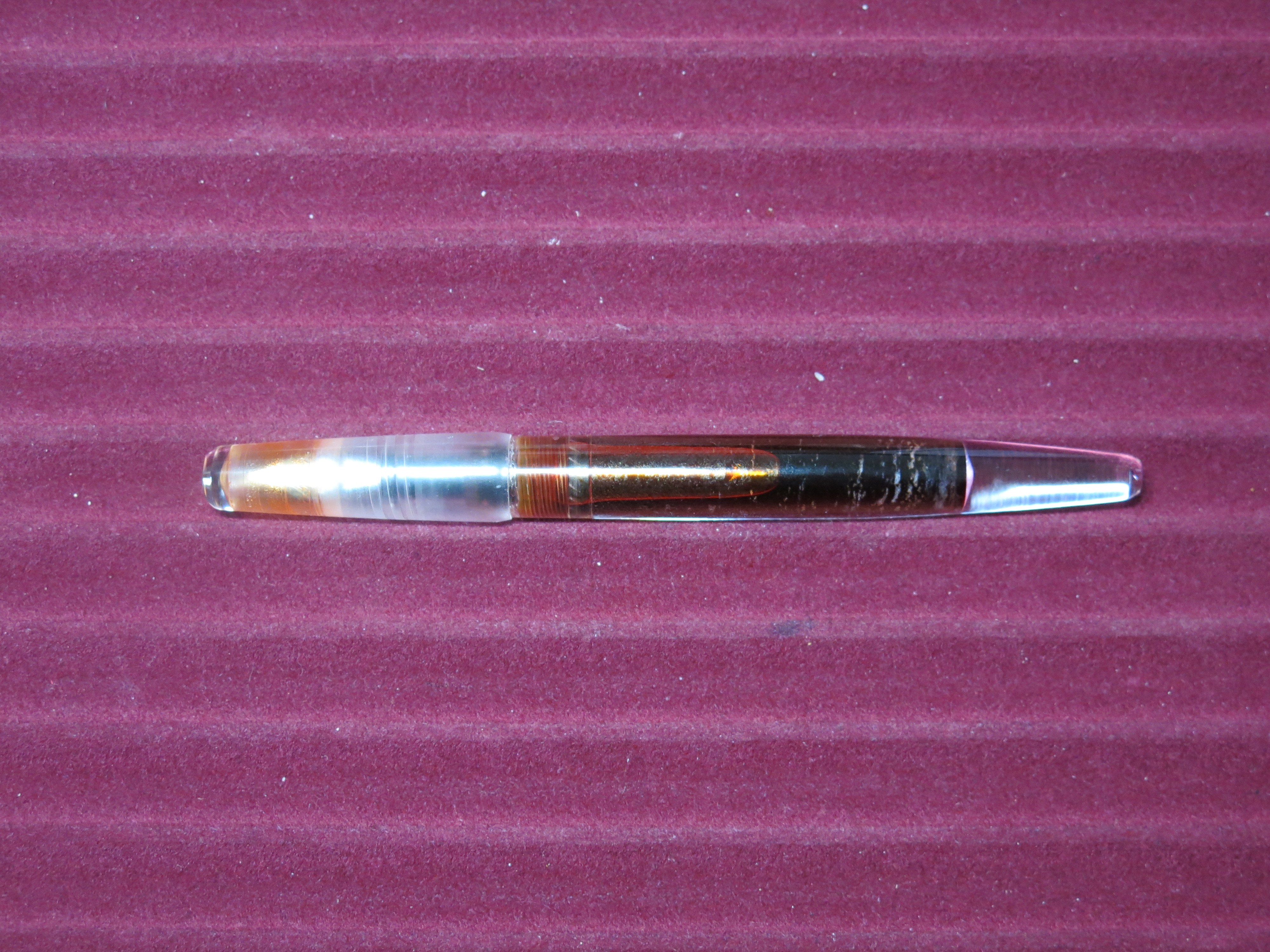 Franklin Christoph Model 66 Stablis in frosted ice with a fine SIG steel nib, filled with Montblanc Lucky Orange. – Bought about four years ago specifically to sit at my computer table/desk.  The pen has a flat underside on the barrel specifically to allow it to be used for this purpose.  For those unaware, the pen model was only made originally to allow testing of the various FC nib types at pen shows but people kept asking when the model would go on sale.  Note the pen does come with a converter but can be used as an eye dropper filled pen, which I think best suits this finish.

Too Lazy to be Put Away 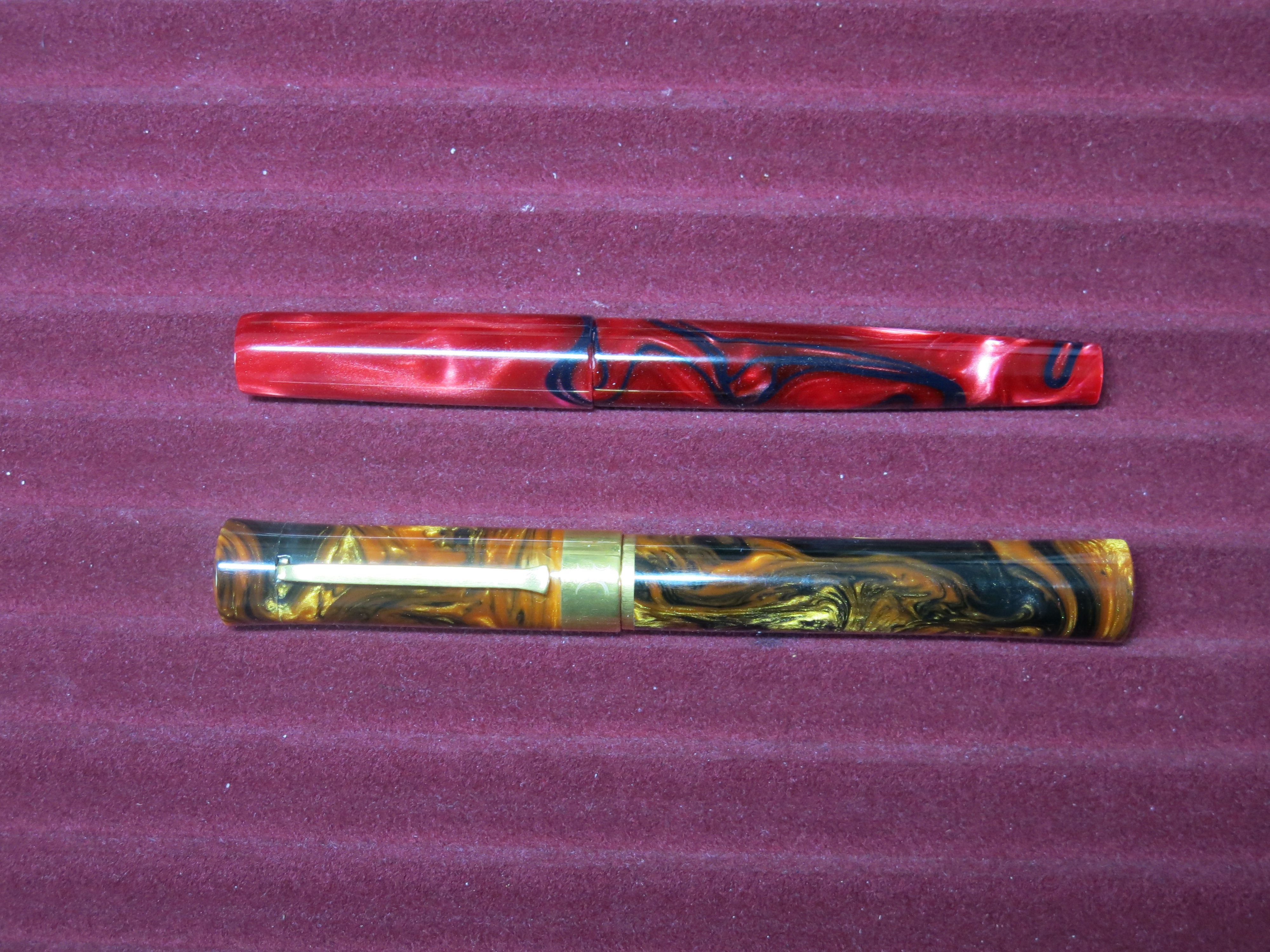 Worcester Pen Company Serenity in OMAS acrylic with a medium steel nib, filled with Franklin Christoph Sweet Maroon. – Despite already having a pen available with an orange or red ink, and it being a tad on the thin side for me, I’ve just enjoyed keeping it out and using it occasionally.

Garcia-Deschacht Durga with a medium steel nib, filled with Diamine/Akkerman SBRE Brown. – I brought this out after a post on a forum (can’t remember which) about a made to order sterling silver pen created by them for the author.  This part turned in to a discussion about how the artistic background of the maker does come through on his pens.  It is a beautiful pen to look at and a nice one to use, though the Bock nib did take a while to work in. 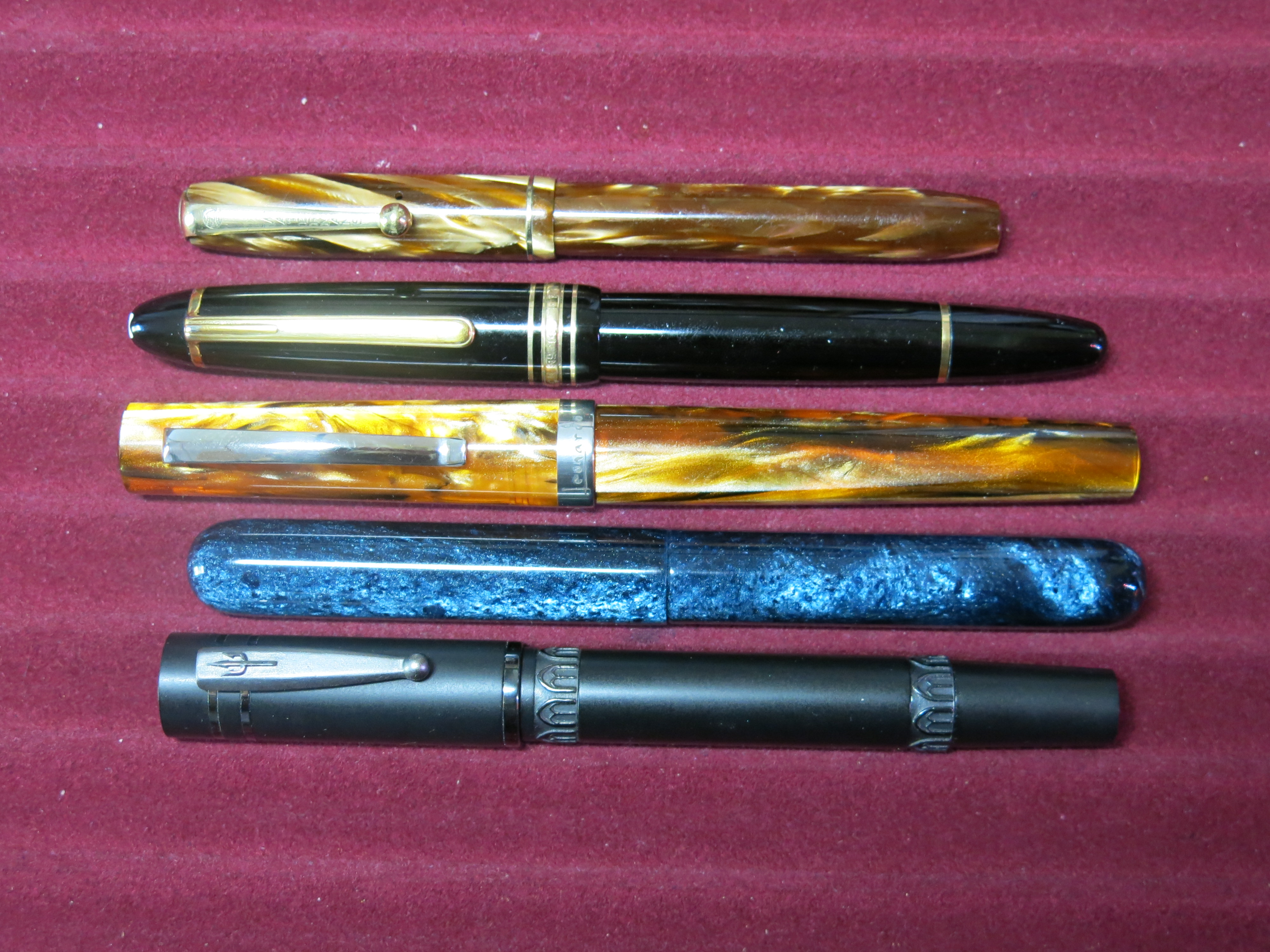 Waterman #2 Fountain Pen, filled with Pelikan 4001 Royal Blue. – I was actually given this pen by the person I recently bought four others from, including the Lamy Persona and Stipula Faceted Eturia Alter Ego.  It is in superbly good condition.  The previous owner had bought it from Go Pens in the US where Gary Lehrer had refurbished the pen.  I believe Gary is an acknowledged expert on vintage Waterman pens and has published a book or two of the subject matter.  It was unsurprising that it worked straight away.

Montblanc 146 with a medium (?) 14k gold nib, filled with Montblanc Toffee Brown. – Bought this at the March London Pen Show from Michael Vondrasek, a trader who’s stock is part Montblanc.  I’ve been able to date it to being made between 1990 and 1992, based on the first style of MB plastic feed, the 14k gold nib in a gold finish (not two tone) and the country of manufacture being Germany.  Unlike most modern MBs the 14k gold nibs were softer and slightly springy (I believe it is also the same with Pelikan’s from before the ‘noughies’), much more suiting my preferences.  The nib is also slightly stub in nature.  Only catch is I actually find the pen and writing experience rather anonymous (MB fans please do not lynch me for this) and so I can see this being sold on further down the line.

Leonardo Momento Zero Messenger in caramel acrylic, with an extra fine nib, and filled with Ferris Wheel Press Candy Marsala. – Another one picked up at the last London Pen Show, this time from Insta.Emy’s Pen Venture.  The model is very colour dependant and I found most of the options to be very generic and bland, however the caramel acrylic did stand out and makes for an interesting finish (it is partially translucent as well).  While Emy was able to swap Leonardo Messenger nibs (he had official spares with him – friction fit) he only had this pen ‘ready to go’ in EF and B and I decided to go as is, with the view that this pen could replace my Franklin Christoph 45 XLV as the fine note taker in my daily carry set.  It was a mixed start as it suffered very badly from ink evaporation, though that seems to have stopped – I suspect it might have been manufacturing crud in the cap threads.

Den’s Pens Aequitas with a fine steel nib and filled with Krishna Inks RC Christmas Eve. – A third pen show purchase in this list.  From a new pen maker and in an interesting acrylic.  Nib was a little dry to start with and despite close to five turns to cap, it does seem to suffer from ink evaporation.

Nettuno 1911 Black Sands with a medium steel nib and filled with Franklin Christoph Spanish Blue. – I’ve been intrigued by these pens since they were first launched, but having seen the original versions, with very plastic like gold and silver finishes over the metal work, I felt they had far too much bling factor for my personal tastes and also the pen was just too expensive.  The Black Sands variant, with the ruthenium trimming is far more subtle, but still far too expensive (though to be fair a lot of that will be down to the metal work).  I picked this one up close to half price from Cruzalt Pens and it is growing on me, though it has been a far from perfect experience as the nib needed a lot of work (seems to be a common issue with Nettuno pens) and the actual finish to the pen is rather disappointing, even with taking in to account the fact it is assembled by hand.  Having said that most my gripes individually, aside from the nib, could be considered minor, though anyone with a bad case of OCD would have quite probably sent the pen back. 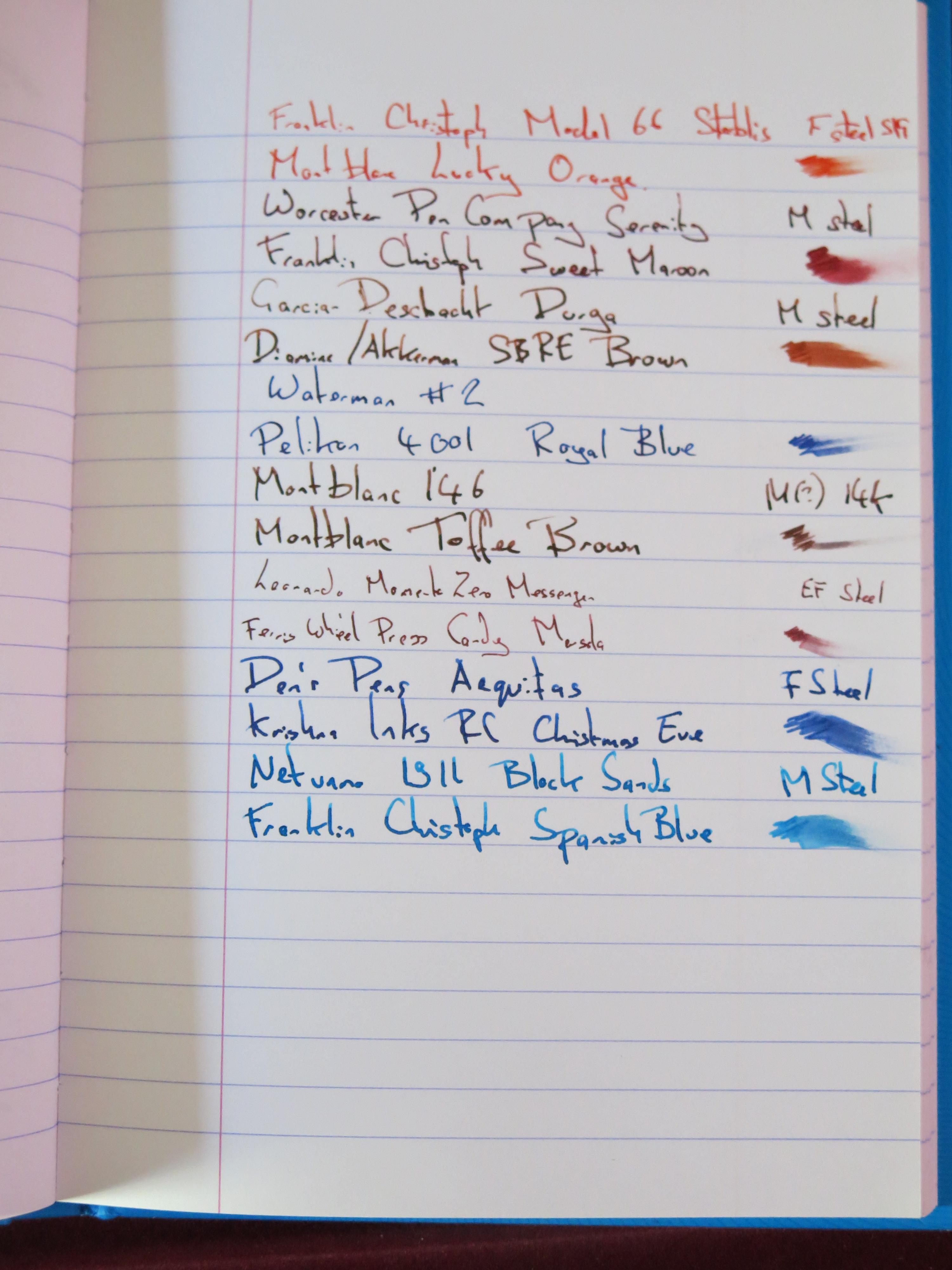