What happens when an artist and sculptor moves in to the fountain pen world, making every component bar the nib/feed unit.  This is what happened with Andy Deschacht of Garcia-Deschacht from Belgium.  The net result is a range of unique pens with an attention to detail and visual aesthetics.

I must admit I had not heard of Garcia-Deschacht (here-on referred to G-D as they use this on their website as well) until I saw the occasional post on the FPN and Official FPN groups on Facebook.  Each was of a single, unique, newly created pen, which at the time seemed to use a combination of acrylics, but which however, did not appeal to me.  May 2019 this changed when one of their creations intrigued me.  Not enough to want it, but still resulting in me checking out their website.  Looking at the list of pens the Durga grabbed my attention, and while the €280 price tag may have seemed high, when you take in to account the copper work it is not so bad. 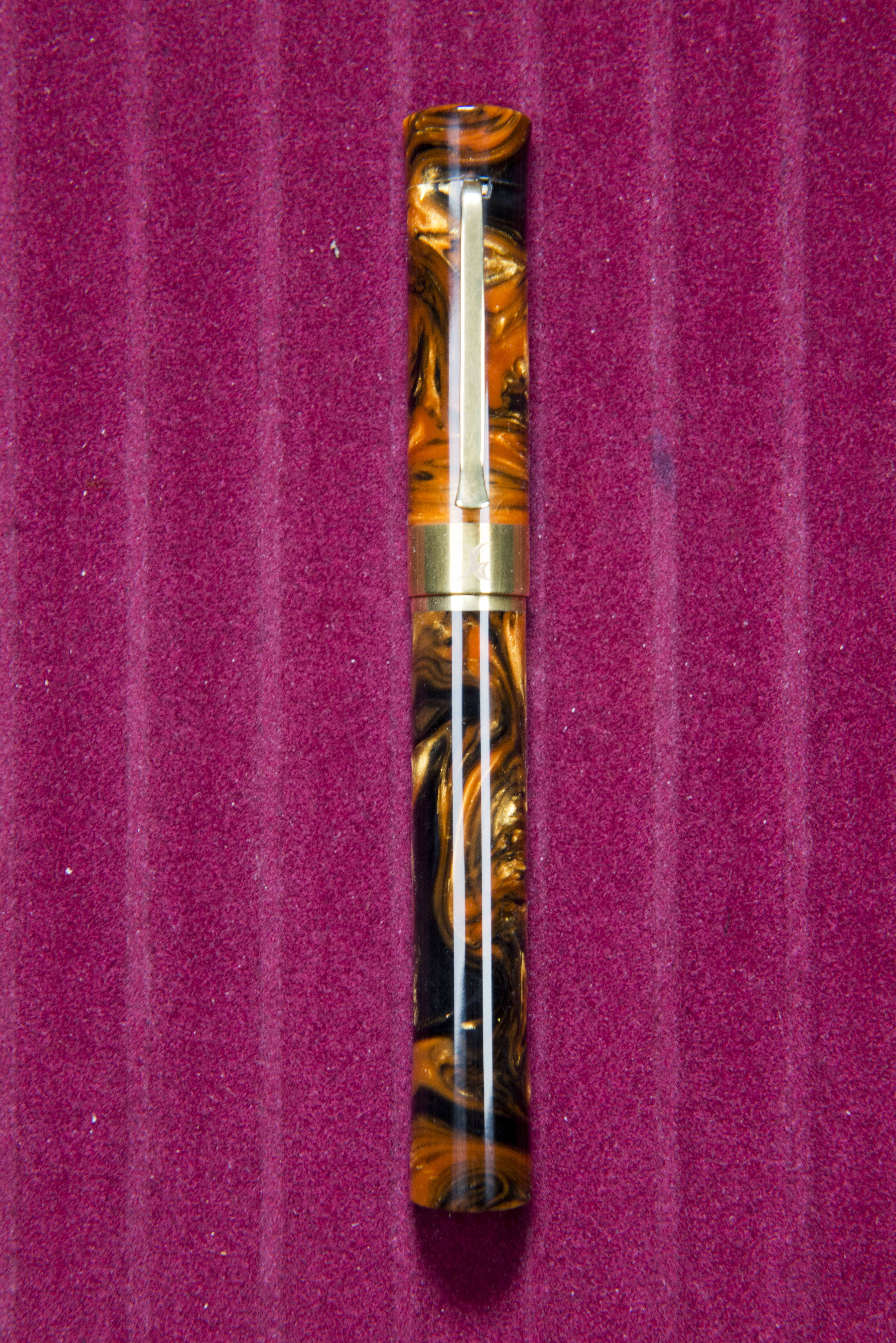 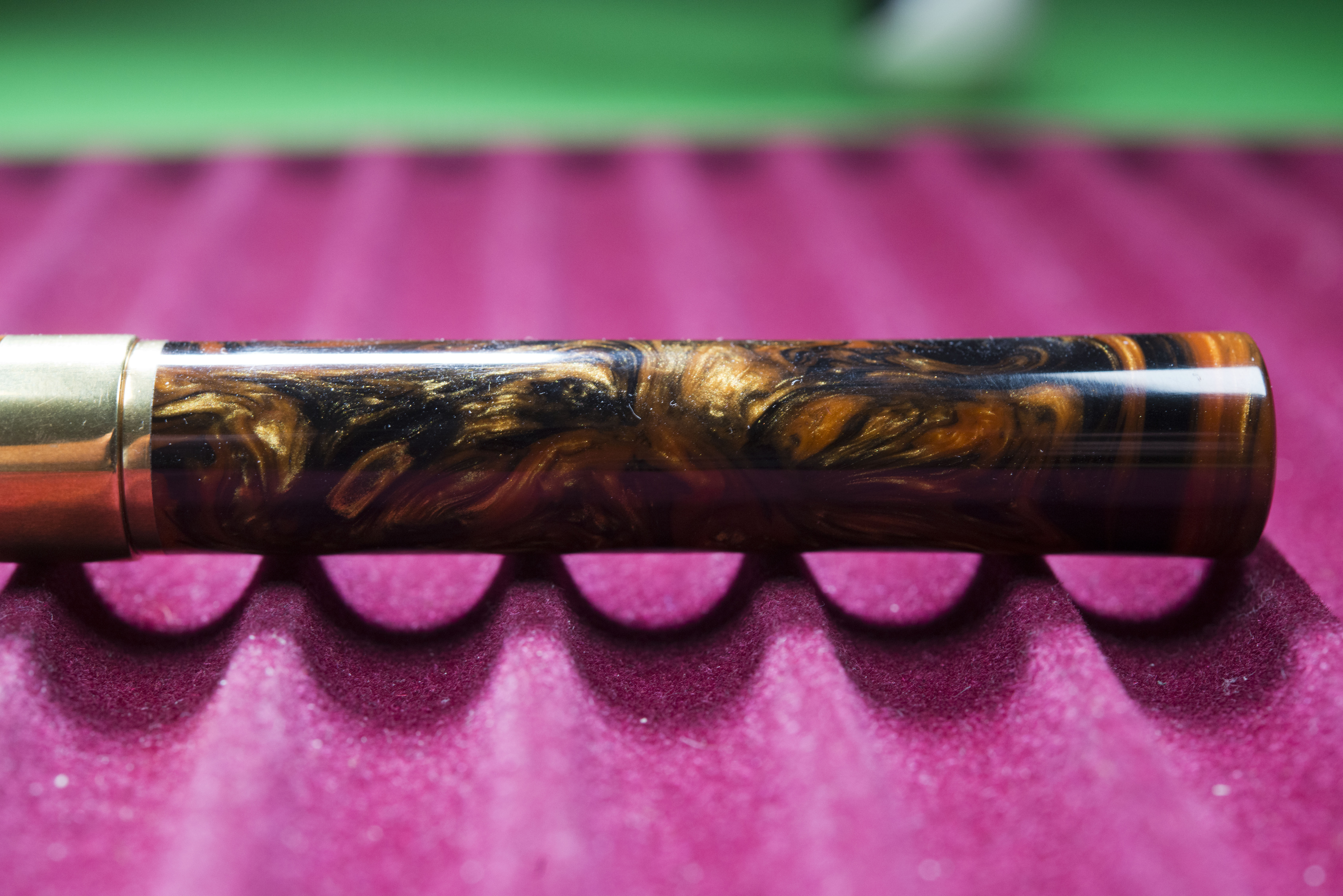 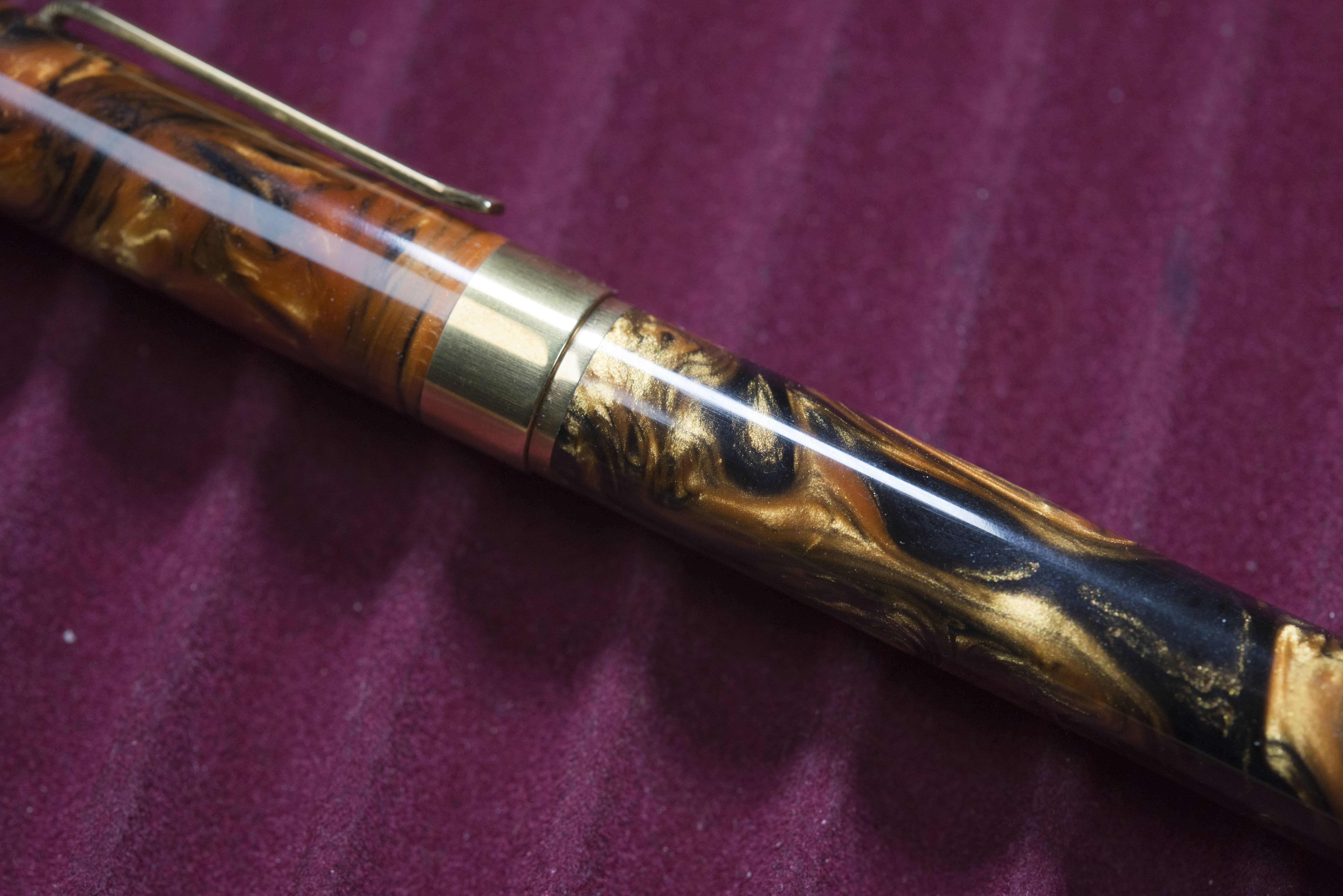 The pen is made using a Lava Lamp blank by Eugene Soto.  In addition the cap band/threads, barrel ring/threads and clip are all made by G-D from copper.  The only part not made by them is the screw in Bock nib unit.  Various nib sizes were available but at the time JoWo was not an option.  TBH while they now also use the latter, I think you can only choose the nib brand if you work with them on a bespoke pen, where as the ones G-D make and put up for sale are already cut for one nib manufacturer or another (for those not in the know, Bock and JoWo screw in nib units use different threads).  The net result is it a very attractive pen with high levels of chatoyance and coppery sparkles. 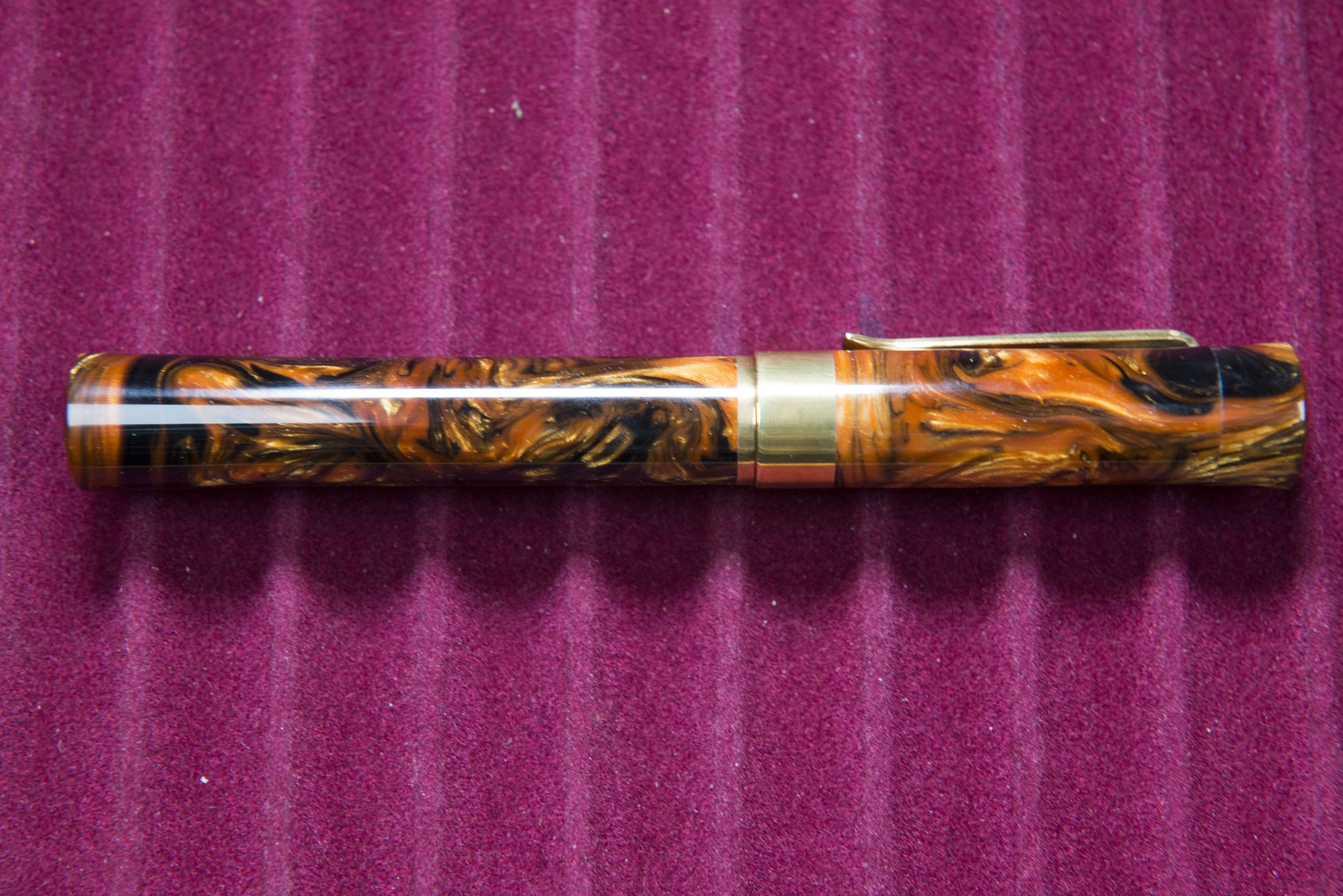 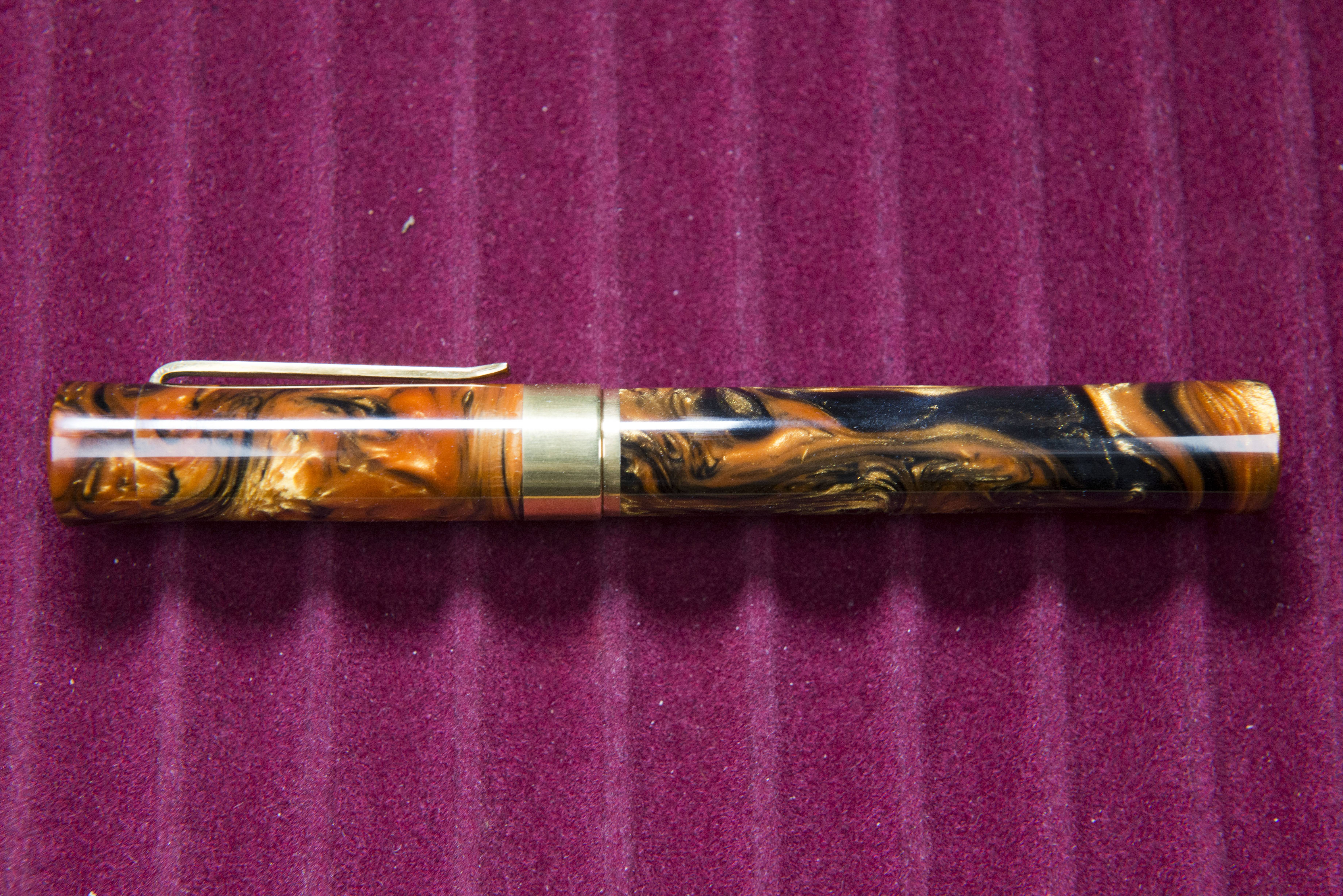 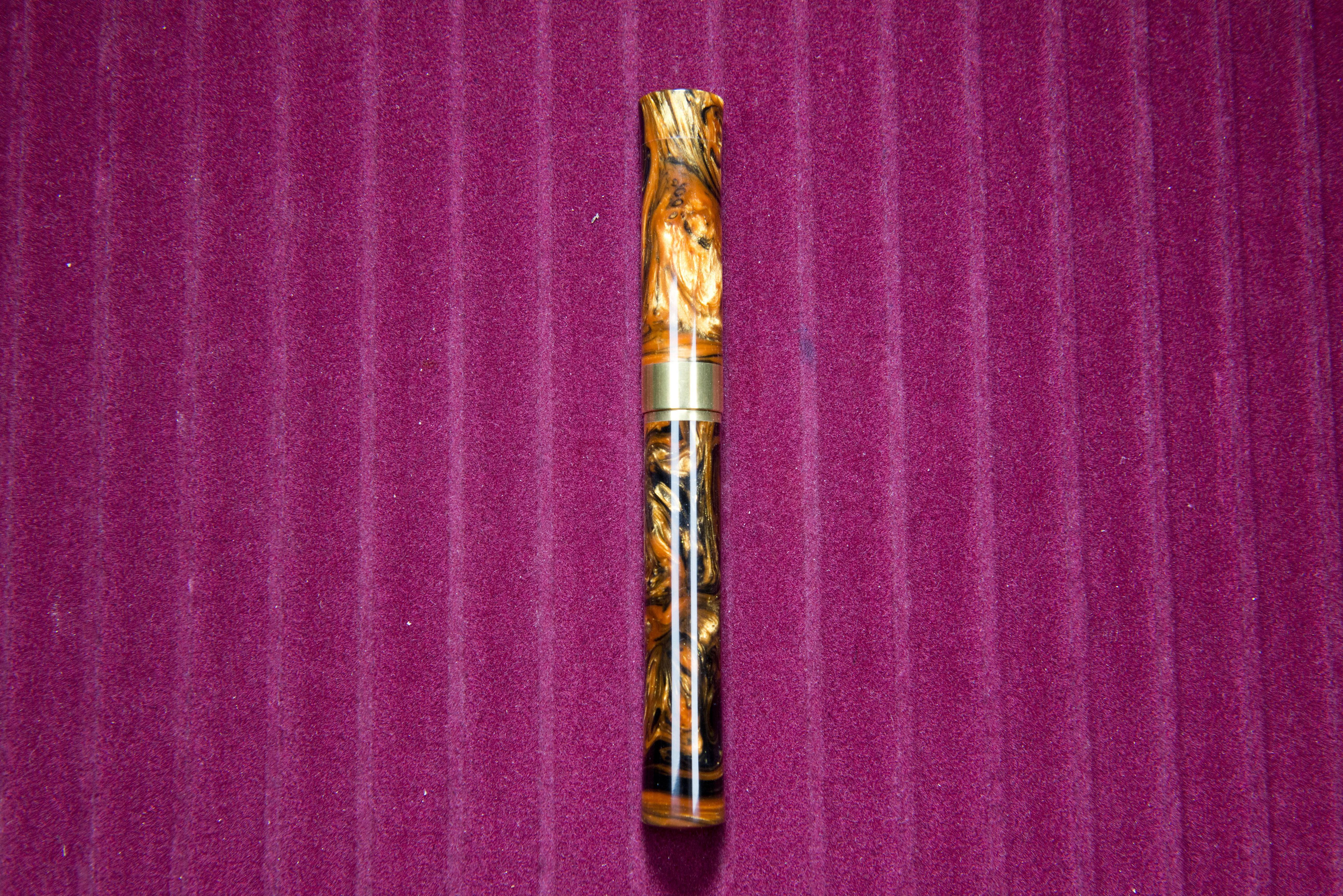 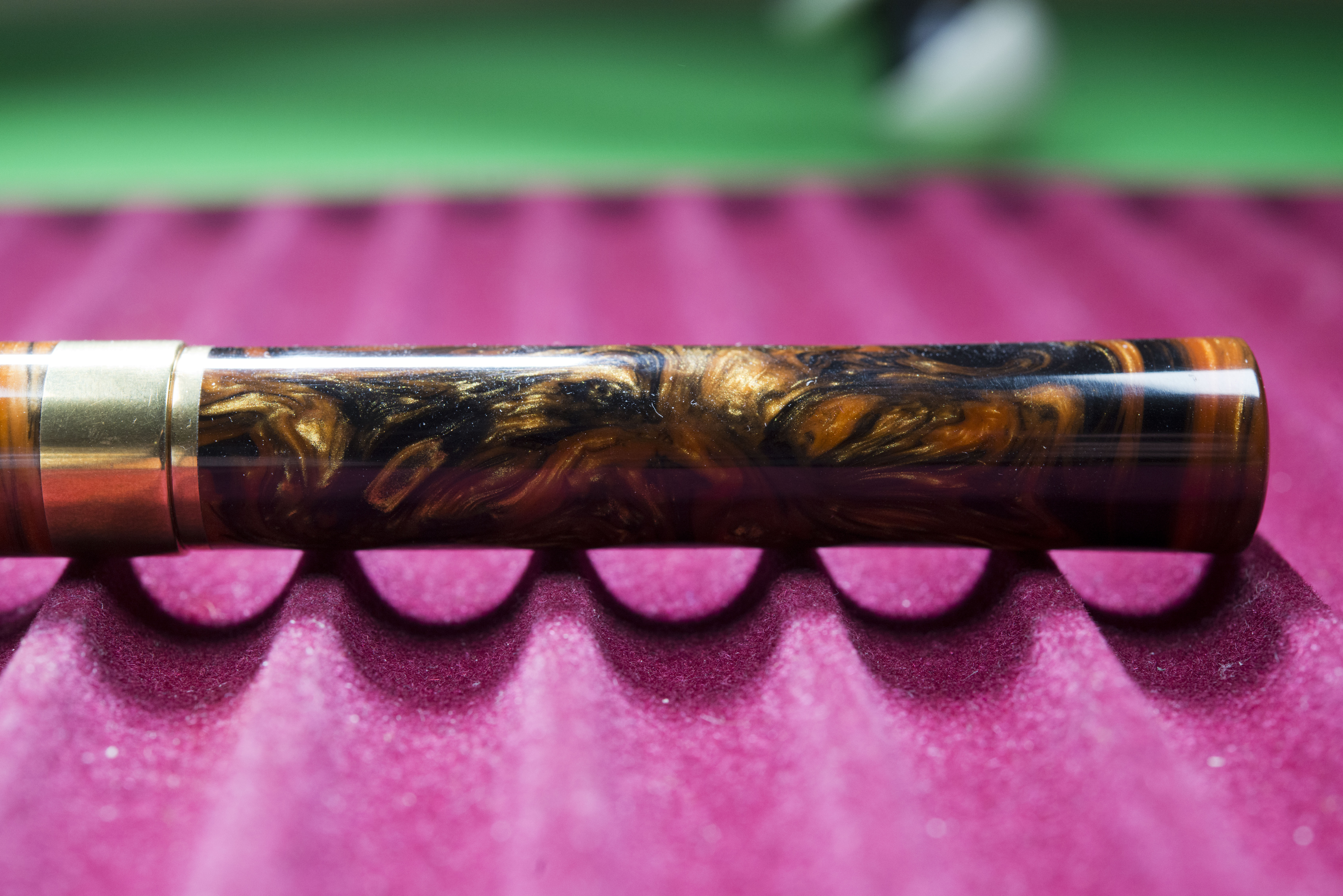 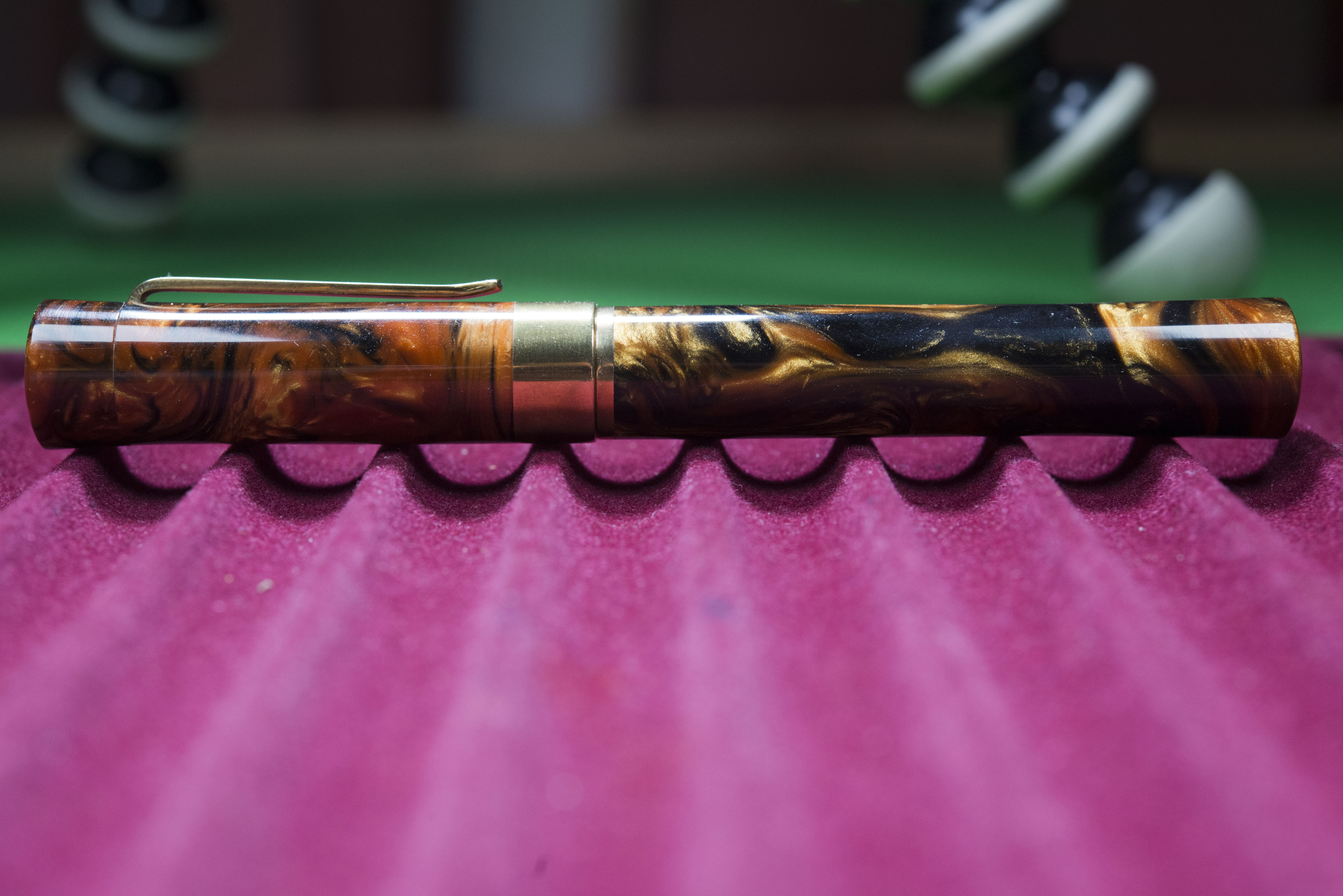 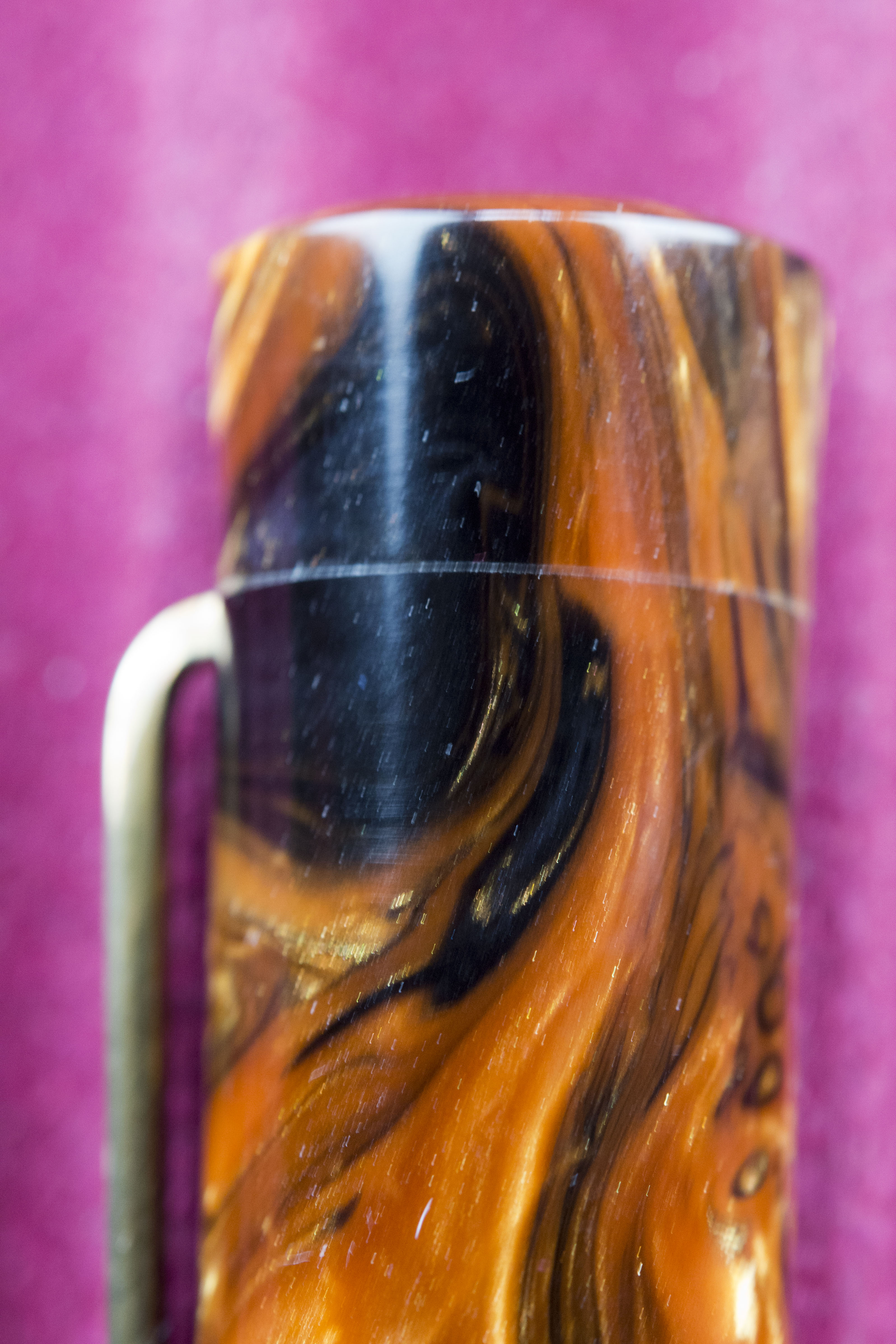 The shape is slightly unusual, though the differences are subtle.  There is a slight tapering in from either end towards the point where the cap meets the barrel.  There is a very slight step between the cap and barrel, though again not obvious unless you move a finger over the area or look closely.  Moving outwards the copper components merge seamlessly in to the acrylic, quite literally.  The tolerances are very high.  The end of the cap and barrel angle out further, almost like the end of a flower stem where the bulb attaches.  In fact there is just one very minor flaw in the pen’s construction.  It is where the finial meets the cap.  About a centimetre down from the end where the finial connects to the cap itself.  The pattern matching is superb, suggesting it was sliced off to allow the clip to be inserted, then glued in place.  My problem is not the seem line, which can not be avoided, but the fact that running your finger over the surface you can feel an edge.  This really is a very minor, petty issue though. 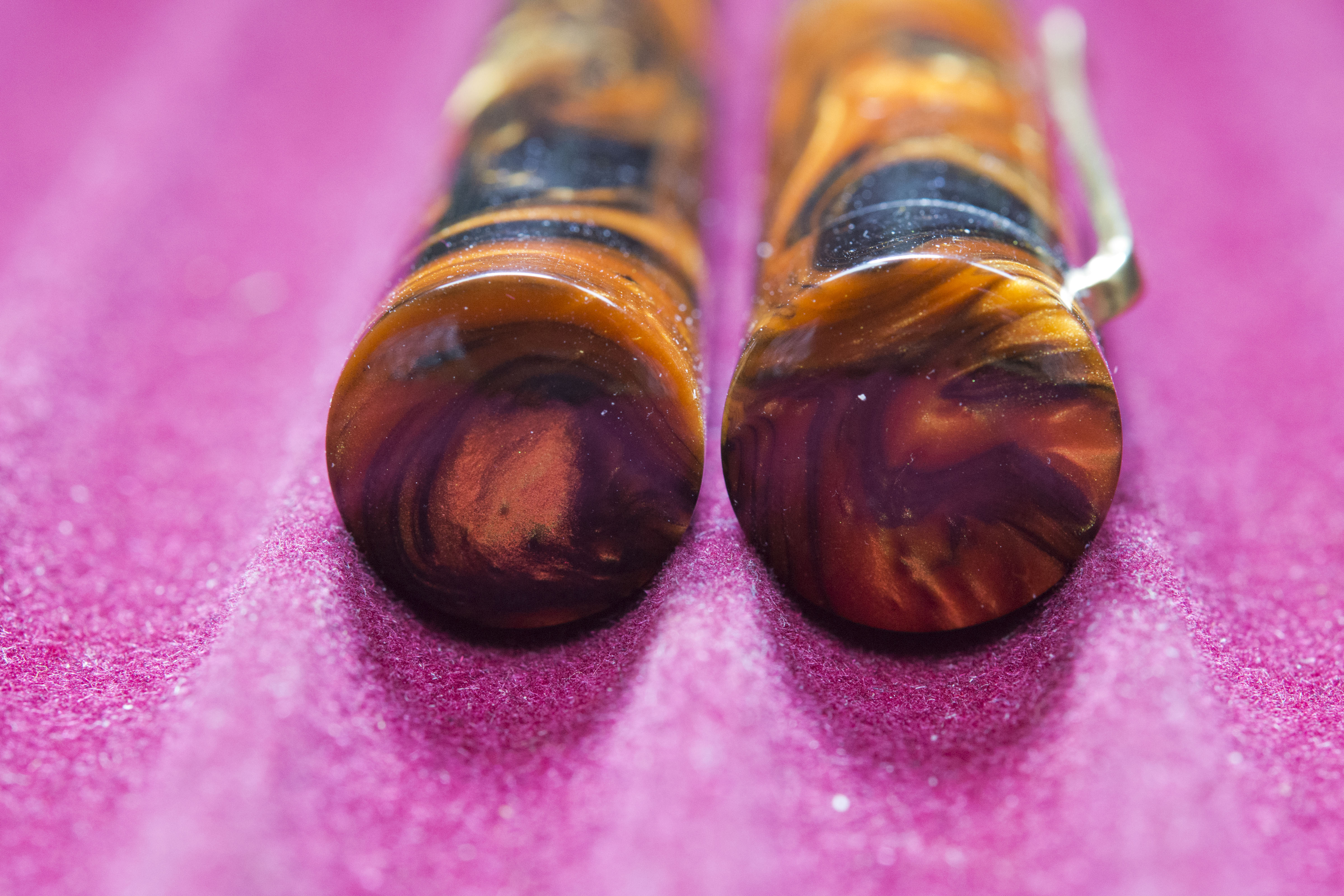 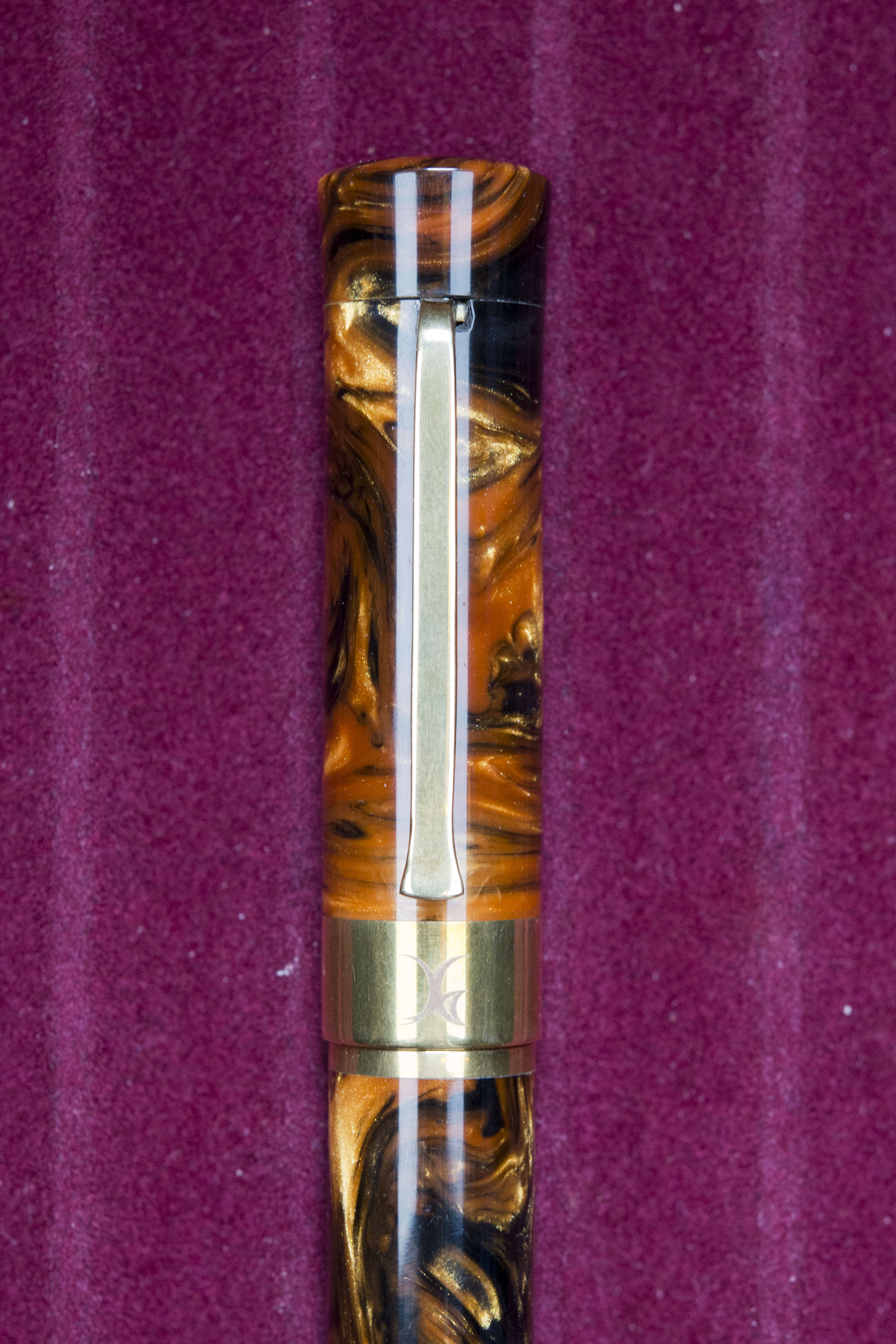 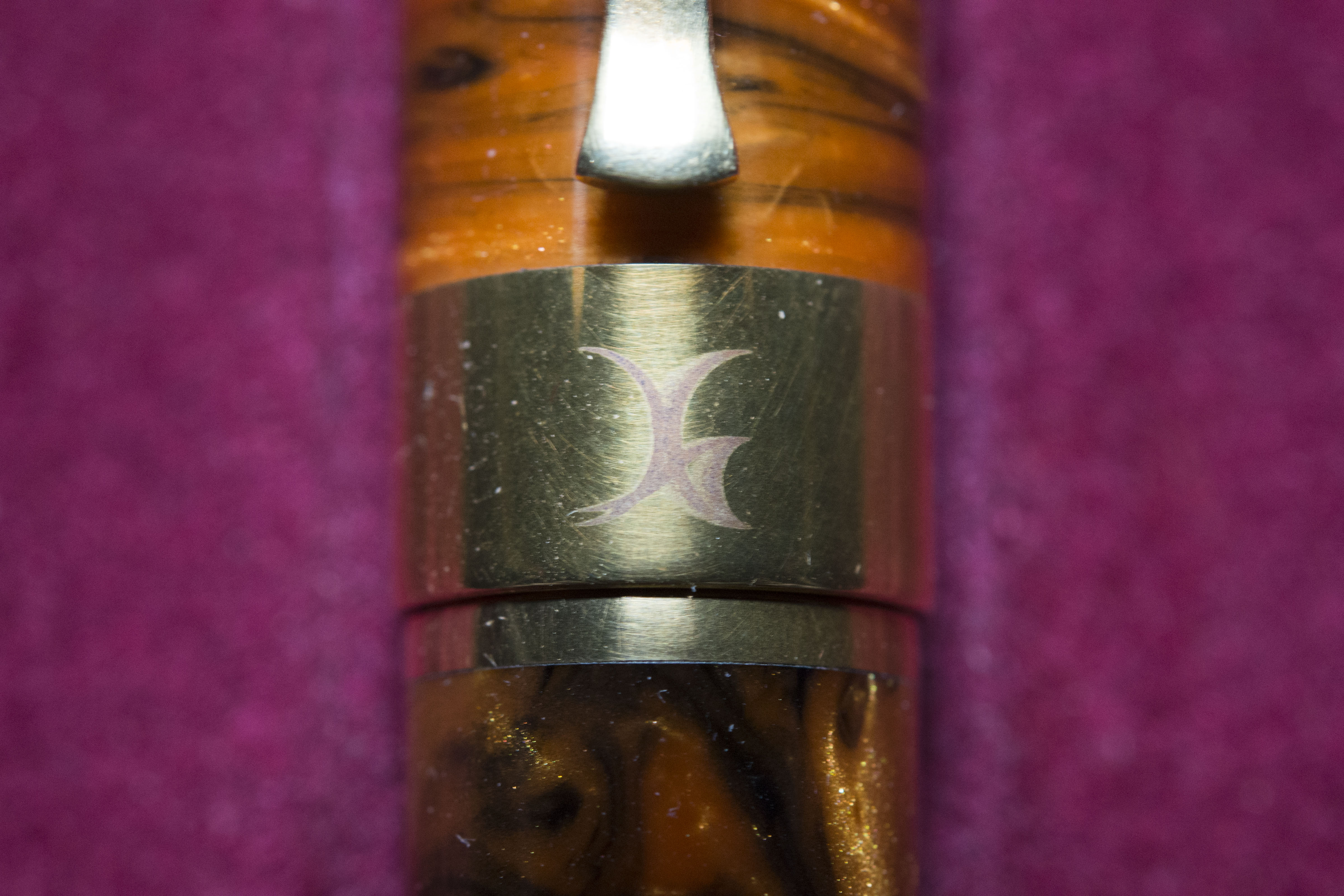 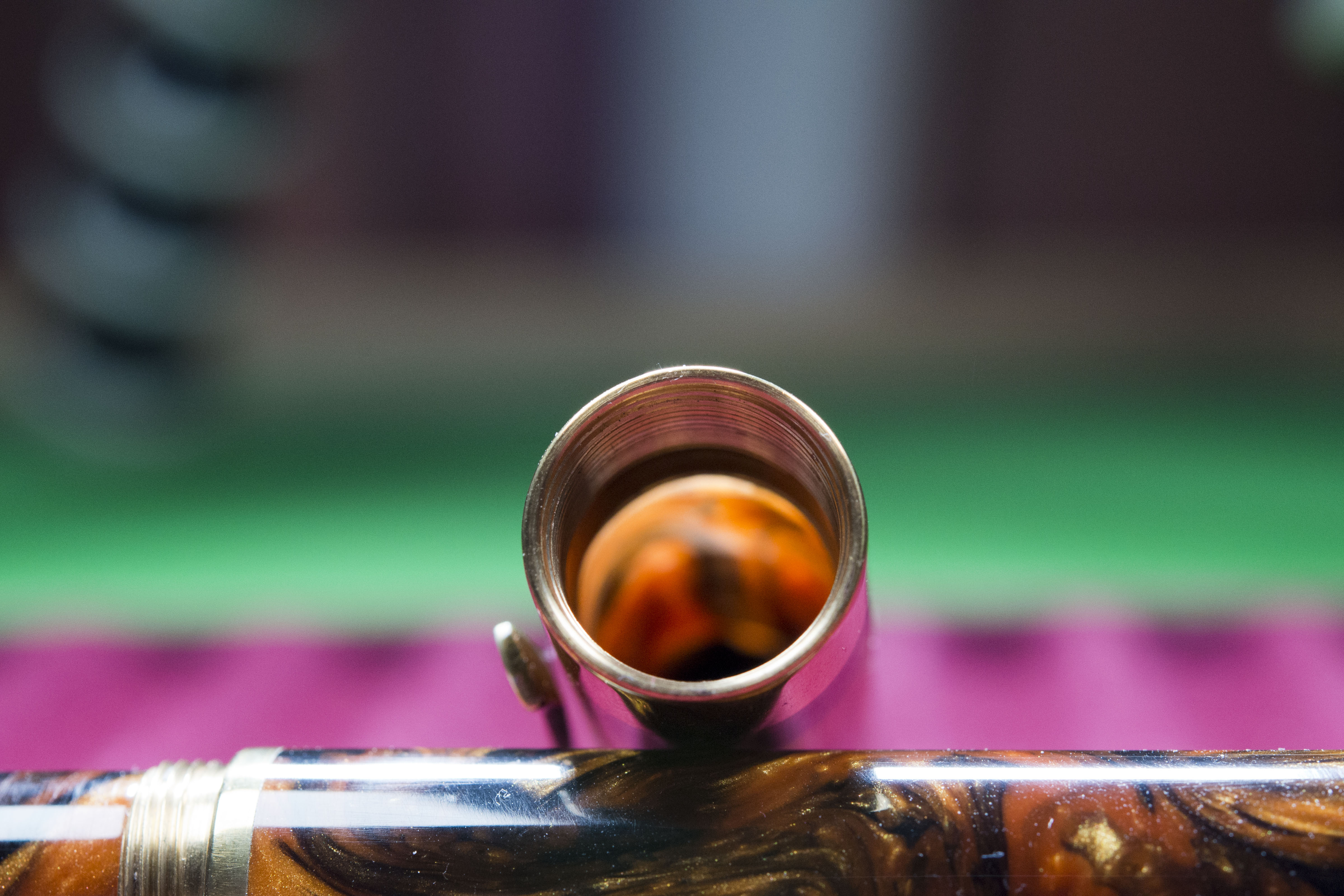 The finials at each end curve gently outwards and suit the looks of the pen.  The clip has a slight gap between it’s end and the cap, enabling it to slide easily over a pocket ridge, however it also allows the pen to slide out again under little pressure.  This is fine with an inside a jacket, however I would think twice before securing it in a trouser pocket.  It is also relatively stiff, but has enough flex that it can clip on to a thicker material, in fact I found it was held more securely in this situation.  Shape wise it spreads out at the bottom in to a small triangle, which is where the metal angles out.  Uncapping the pen takes just one turn (for those who care) and it can not be posted due to the pen’s unique shape.  There is D-G branding on the front side of the cap band in line with the clip.  I’m not quite sure how it is done as you can not feel it.  I suspect chemical etching has been used, and then polished over. 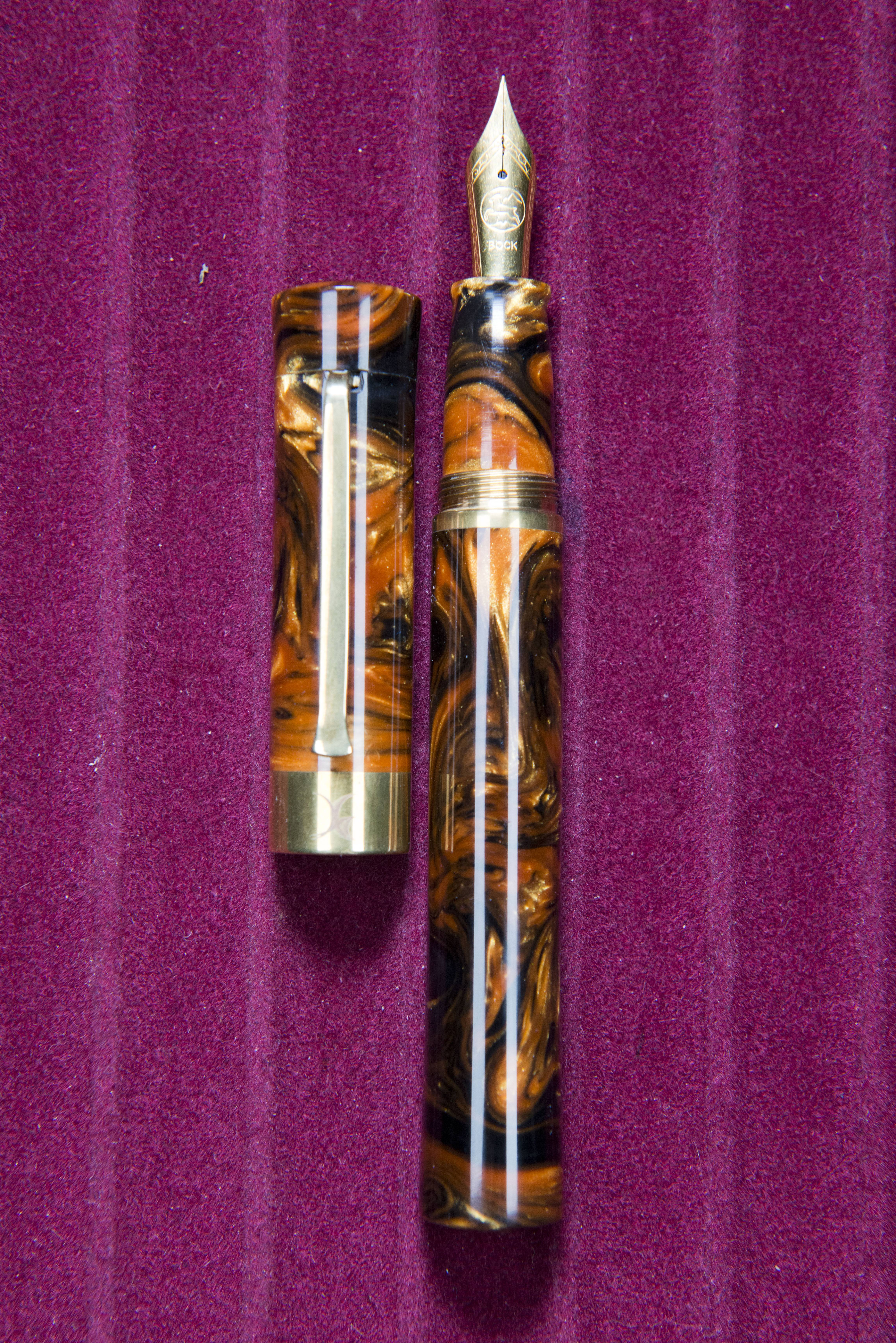 The section is a more traditional shape, curving rather than tapering towards the nib before angling out by about 45 degrees to offer a finger rest.  The copper threads are part of the ring that sits on the barrel.  The step up is minor and you can actually see the outer ring is curving downwards towards the threads.  The net result is the pen is comfortable to hold, even with fingers on the metal work, which is where I find I hold it as the end of the section is a little too thin for my personal preferences. 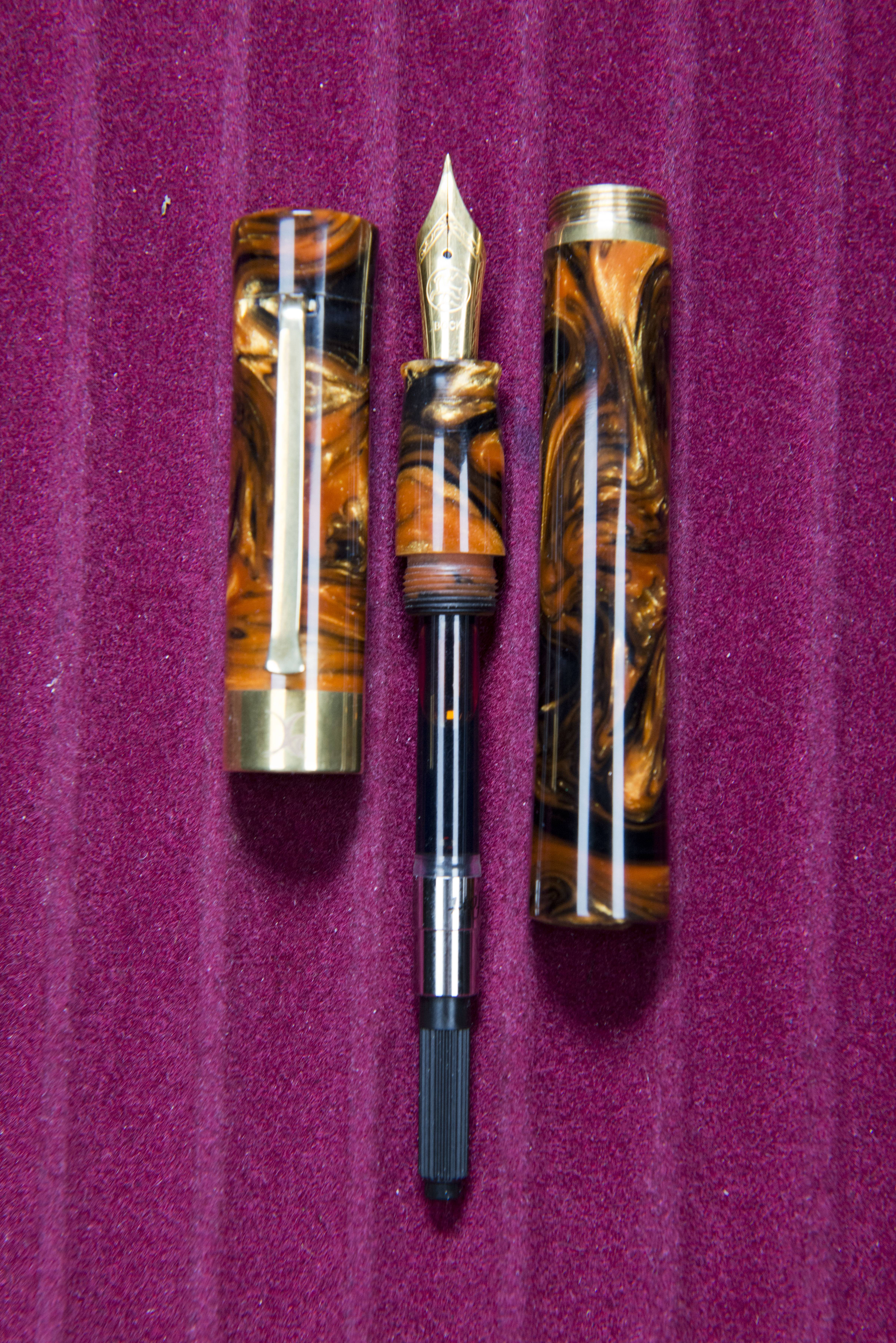 The pen takes a standard international converter or cartridges.  The converter sits securely in the threads part of the section.  Some may be concerned that the acrylic section threads will suffer from wear by screwing into the copper inner threads on the barrel ‘ring’, however you’re not going to be filling the pen that often and certainly not removing and replacing the section any where near as often as you would with a cap. 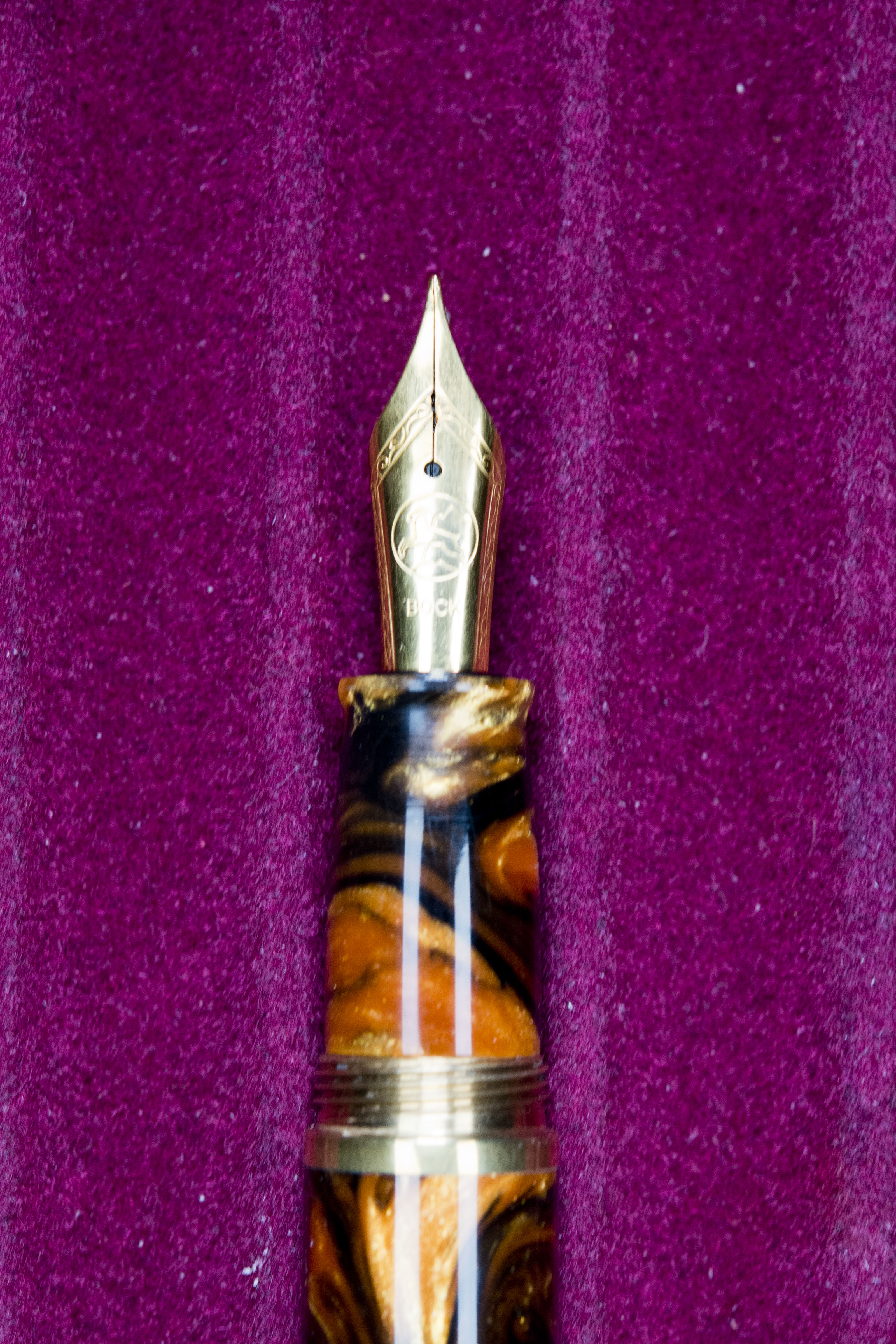 The nib is a standard size #6 Bock unit.  This is where things go wrong, or more accurately went wrong.  I always flush out new pens and there was no difference here.  First I loaded it with a sample of Montblanc Lucky Orange.  This proved to be very dry with the pen suffering from flow problems.  I switched this out, cleaning the pen once more, and tried Diamine SBRE Brown.  There was an improvement though the pen was still writing closer to a fine than a medium and there was still flow problems if I tried to take advantage of the slight bounce the nib offers.  I have since widened the tines slightly by flossing (using the stiff plastic cleaning strip you get with a Pilot Parallel pen) and have cleaned the nib unit out several more times and now the pen appears to write a lot better.  Thing is I don’t think dip testing by G-D would have highlighted these issues as the tines were aligned and there was no baby’s bottom or misshapen tipping. 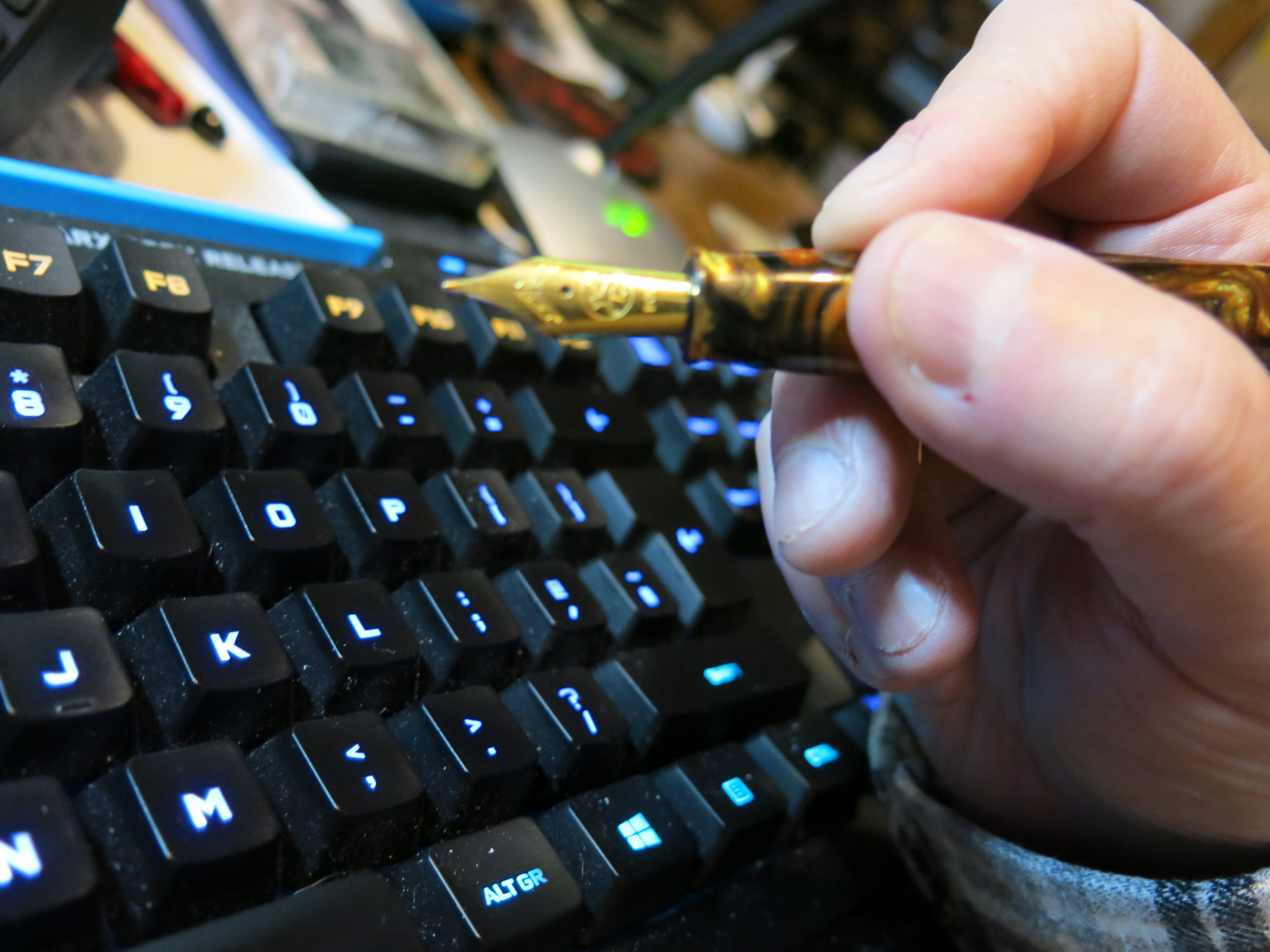 Comfort wise I find this pen a little inconstant.  I think it is due to the way I hold it due to the shape of the section and is very much down to my personal preferences.  Certainly there are plenty of popular pens out there I find uncomfortable to use – the Pelikan Souveran series being a prime example.  Balance wise the copper threads result in the centre of mass being either on or just behind where you grip the pen.  It is weighty in feel and at first can feel a little odd compared to the lightness at the back. 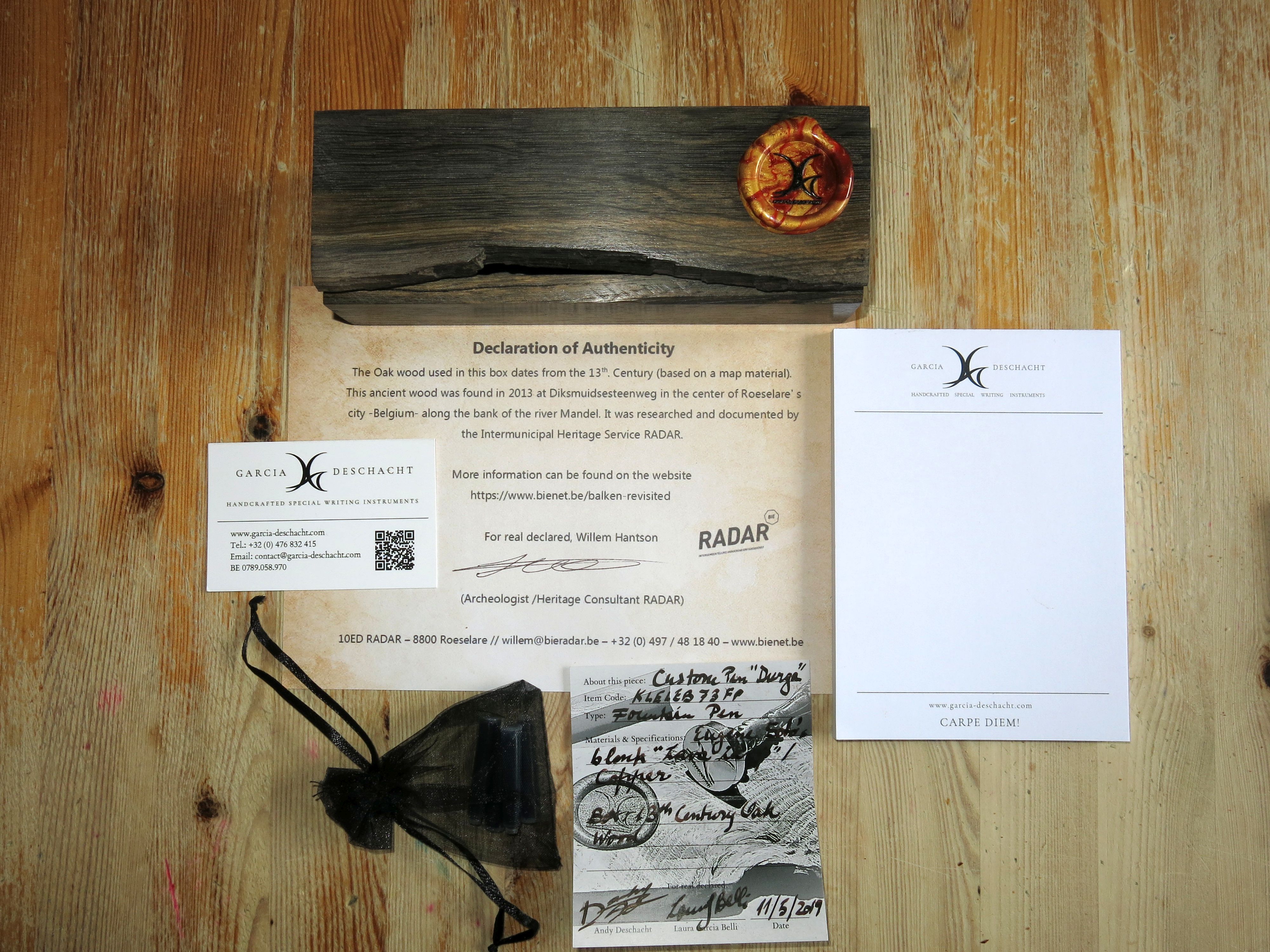 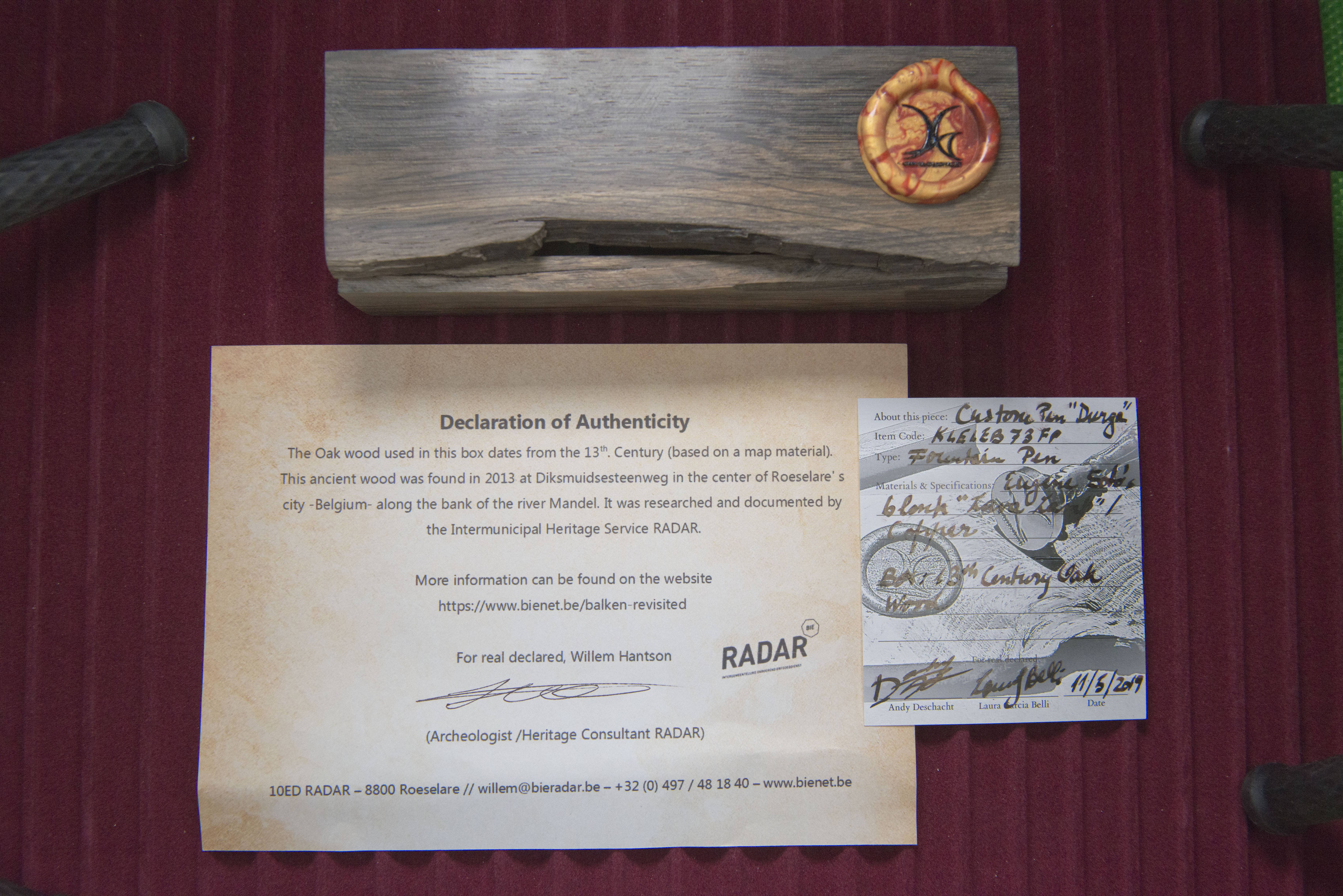 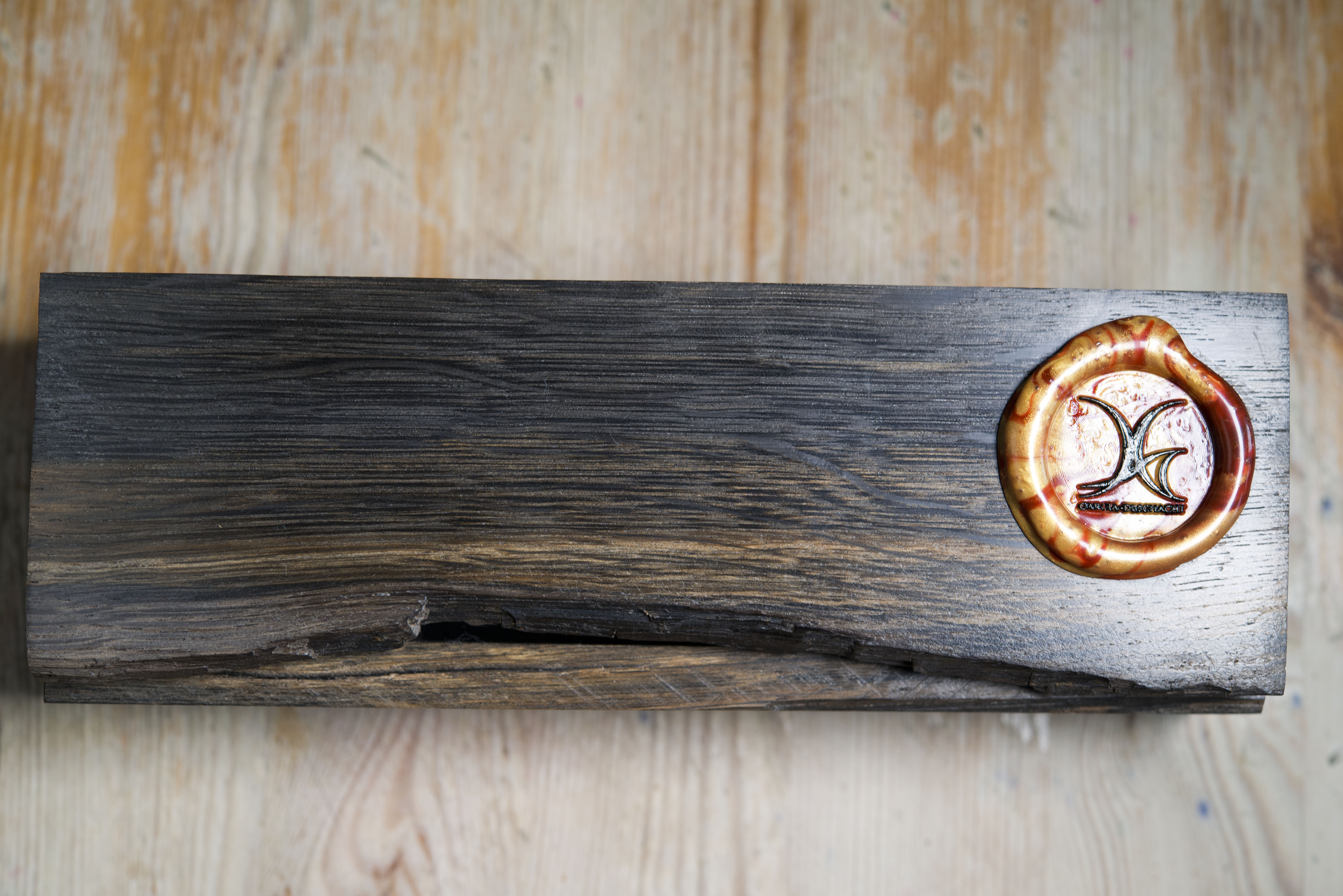 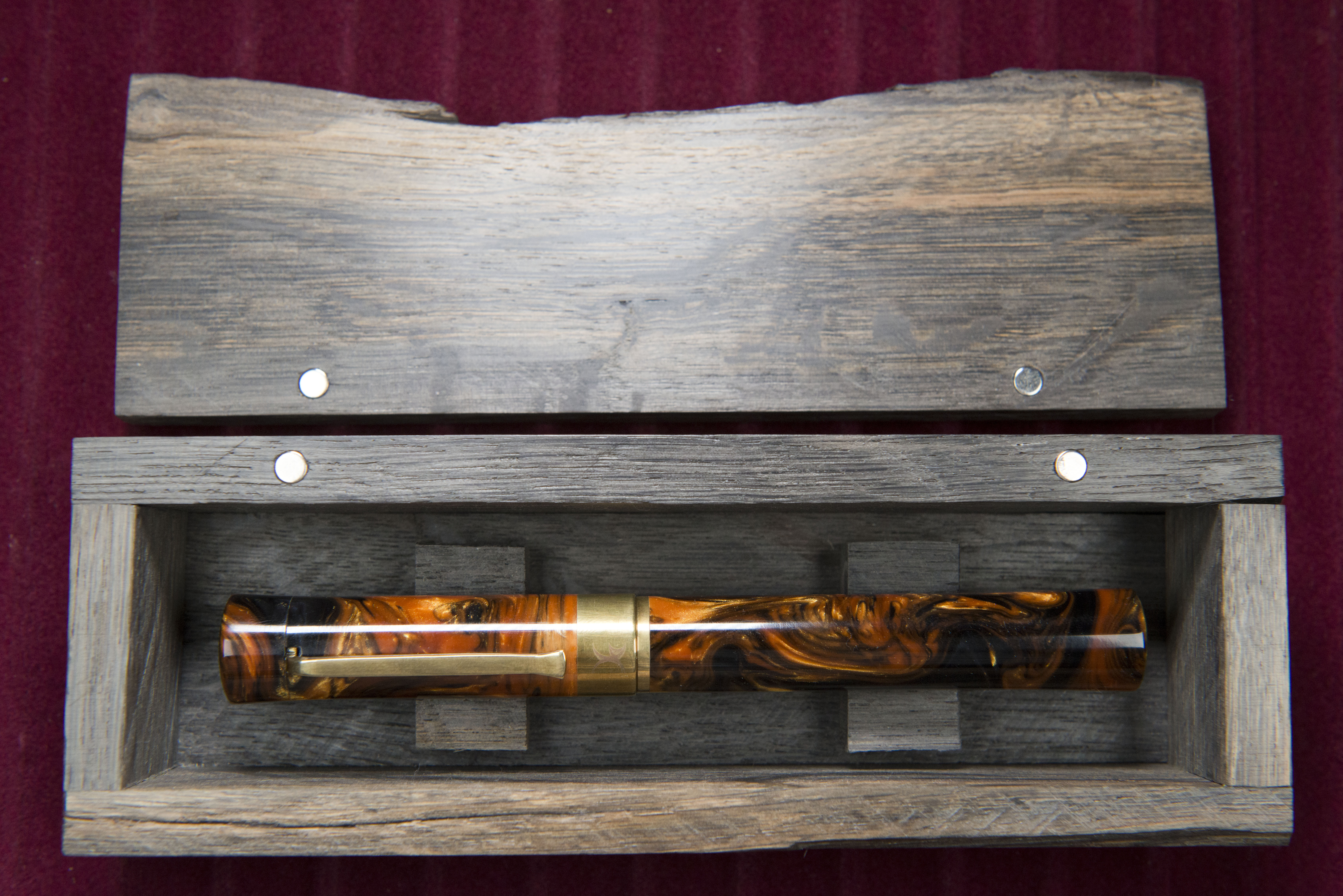 The packaging of the pen was different, almost unique.  It came in a hand crafted box made of 13th century oak, complete with a certificate of authenticity.  The lid does not completely cover the top and it is held in place by a pair of magnets.

In conclusion this is an attractive and very well made pen.  At first I was uncertain about how much I enjoyed using it, as opposed to treating it as an interesting piece of art.  Much had to do with the nib, though if I had seen this at a pen show, the initial comfort factor (which still affects me from time to time) would have led me to put it back down again.  Cost wise I do not think it is that expensive, converting to sterling it is not much more than the Powerful Signature Marine Edition pen I bought, both having hand crafted metal work and being made with a high attention to detail, fit and finish. 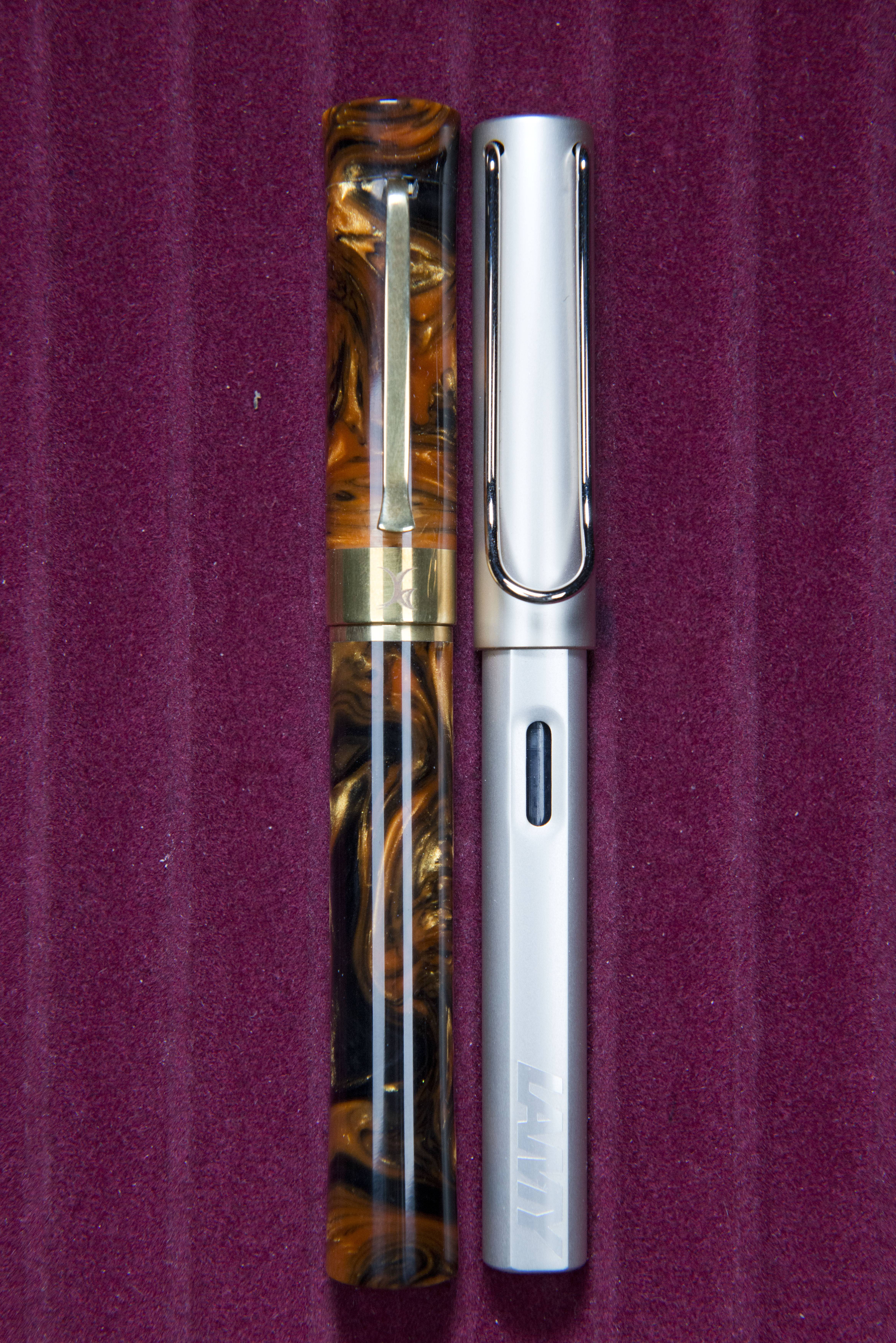 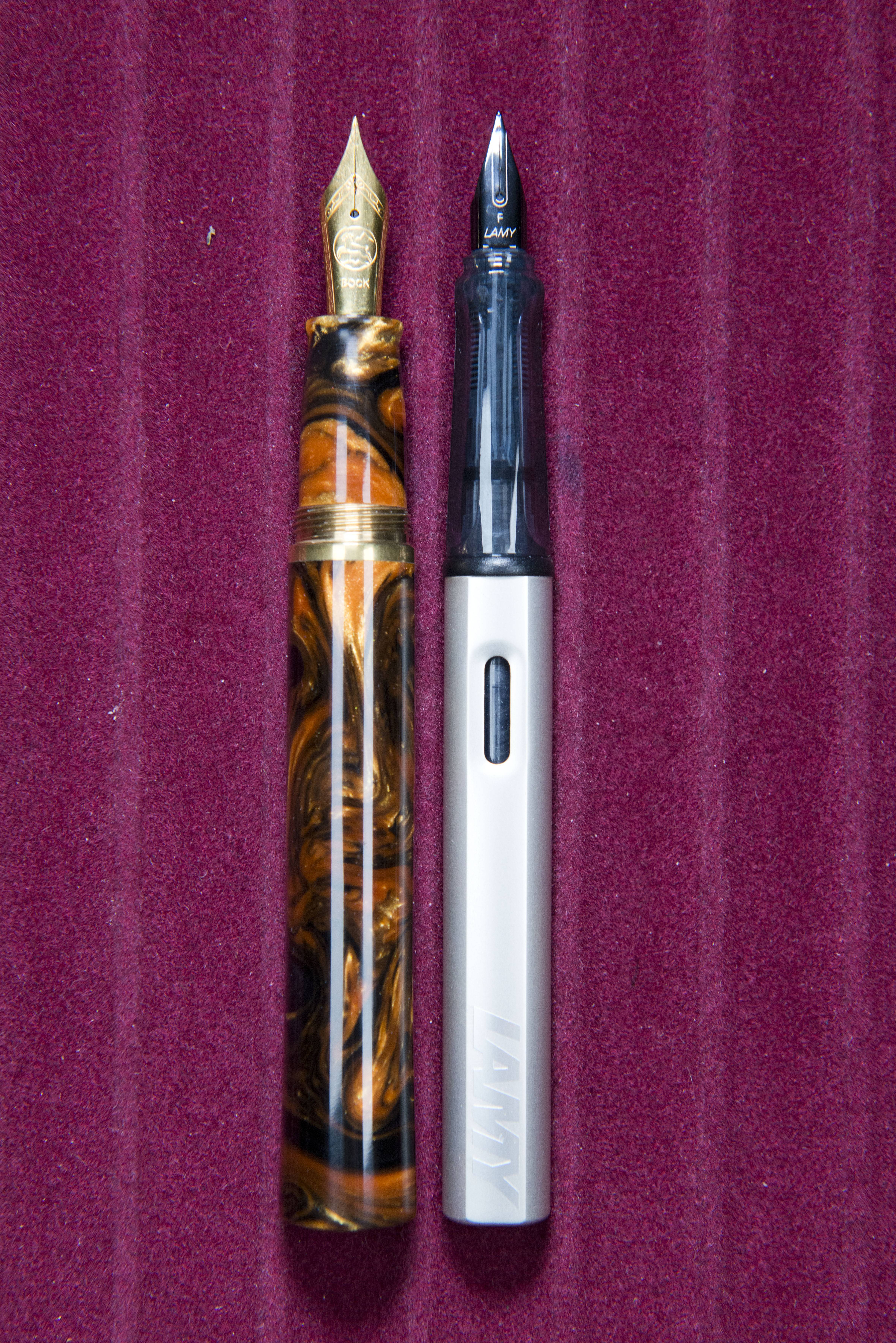 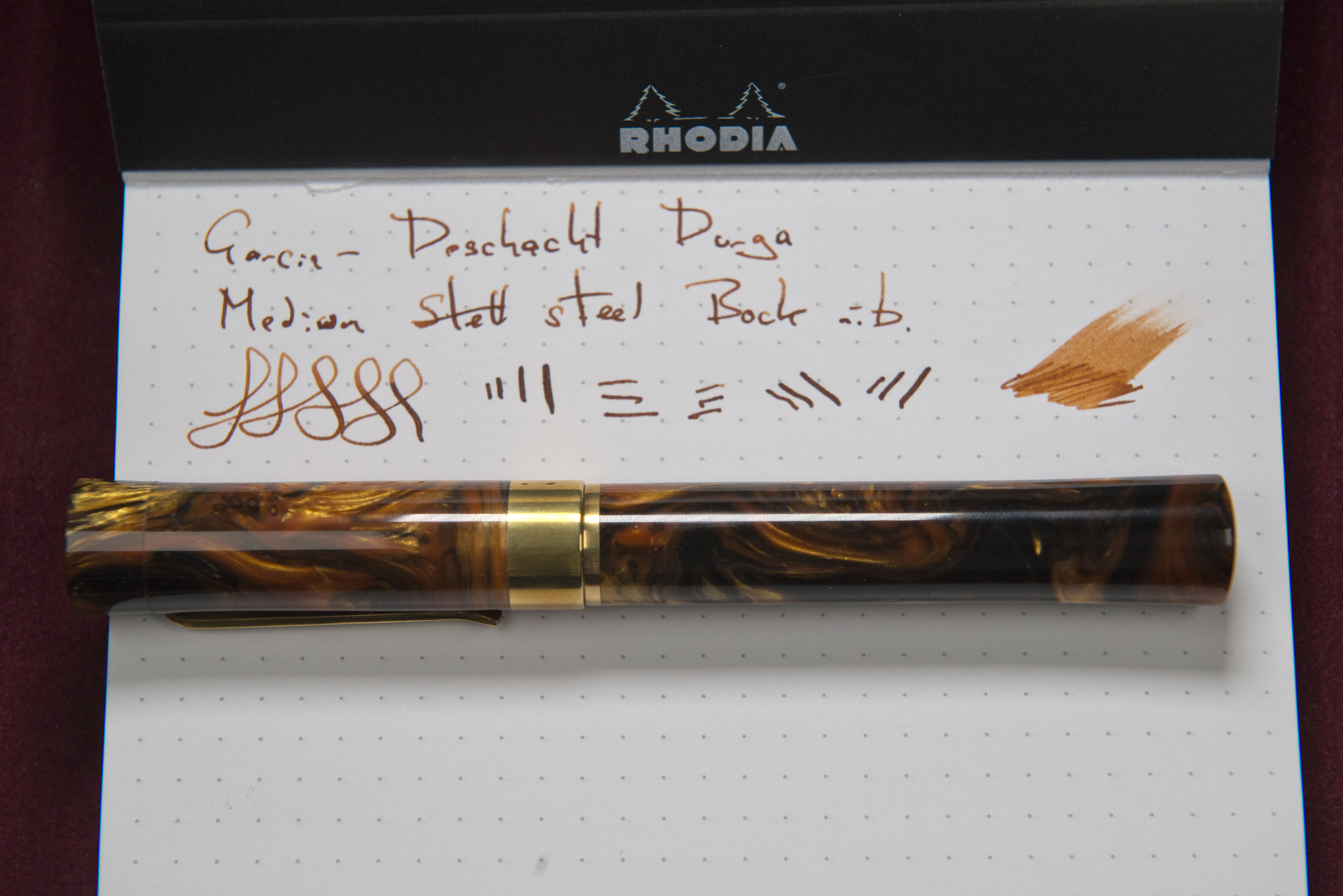