Back in December 2015 an interesting pen appeared on Kickstarter, the VENVSTAS Carbon V.  Designed by architect Lucio Rossi it was of an unusual design and construction and suffered from a troubled start.  Some people loved it, others had great problems.  One was leant to Stephen Brown who infamously lambasted it, which Lucio Rossi did not take too well on the FPN forums.  Still it resulted in a growing range of pens, ending with the D’Art.  I’m not sure what then happened as the company is still going, but the Kickstarter account was suddenly deleted and Lucio Rossi started a new company and Kickstarter account, U75 as well as a new pen, The Edge. 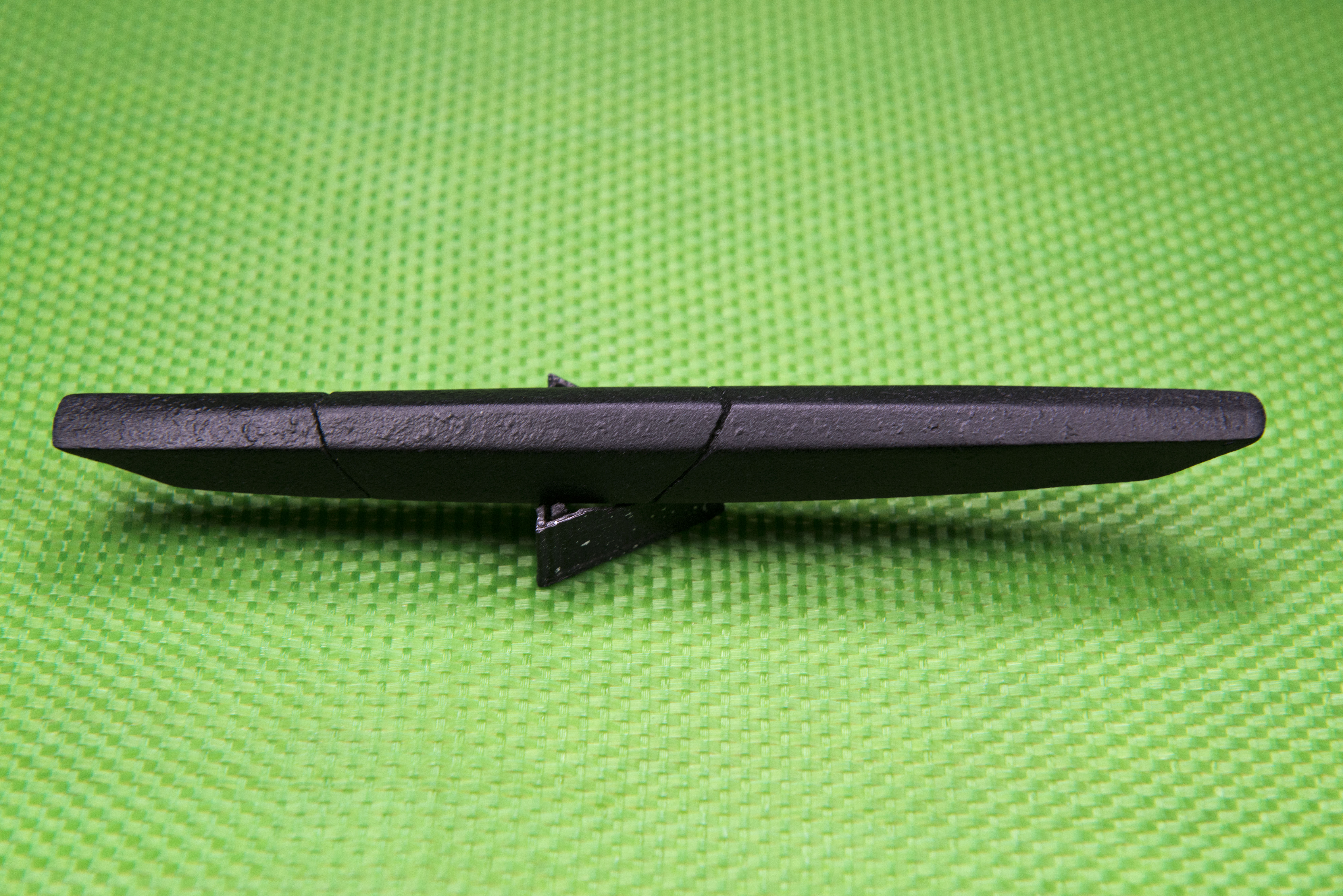 There are a lot of similarities between the Edge and the D’Art, with the new pen almost being the D’Art rotated by 180 degrees.  At just €37 (about £34 at the time) it was cheap and interesting looking.  Additionally the rotating of the design by 180 degrees allowed for a better hold position for the traditional tripod grip.  Of course it was easy to ignore the sudden change of the creator’s company, the closure of the old Kickstarter account, and VENVSTAS still active and trading.  No reasons were mentioned.  Perhaps this should have triggered some alarm bells, though for me I received what I expected.  From the Kickstarter comments page you will see there are backers who have still not received their pens (from the supposed second batch) over 6 months after mine arrived. 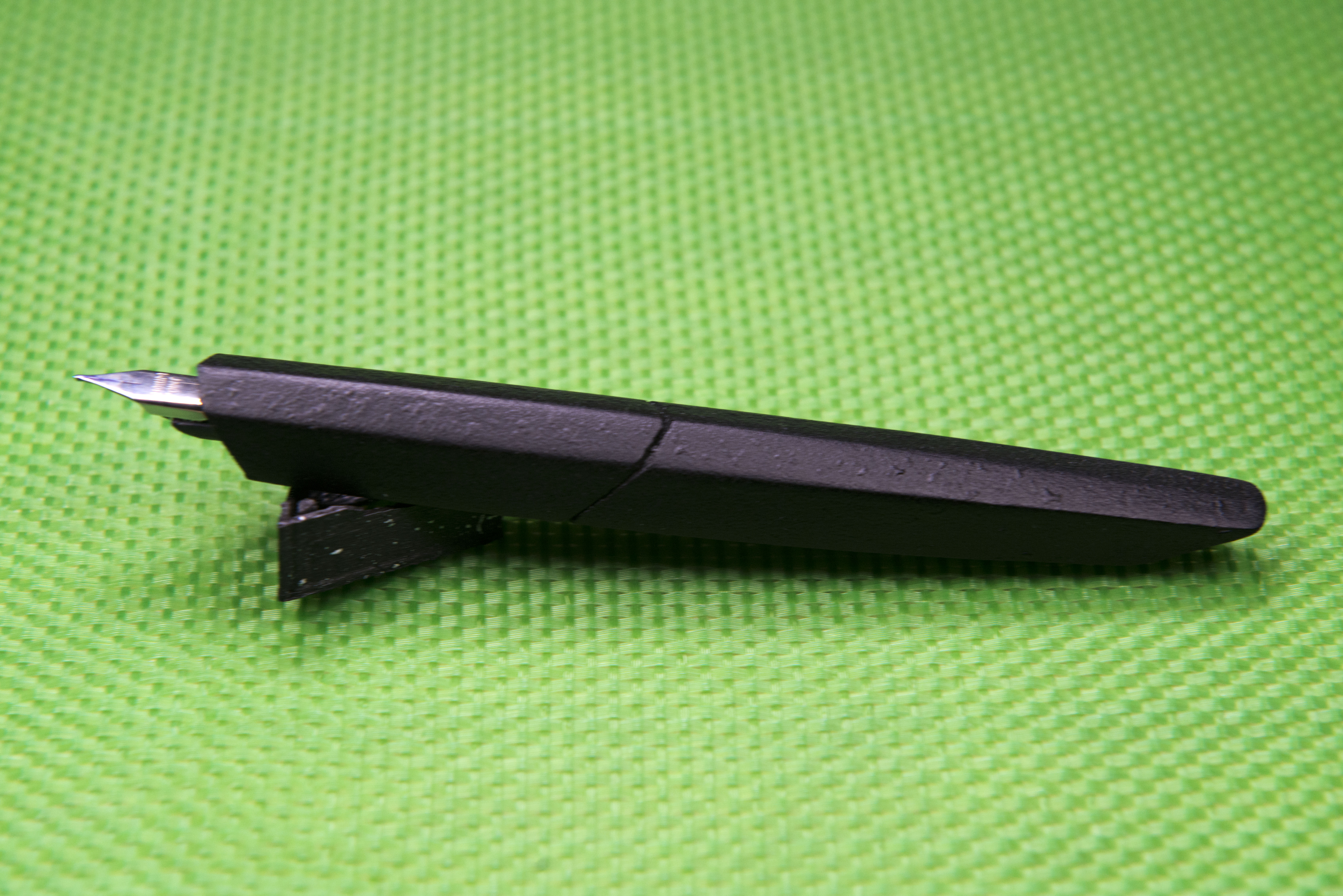 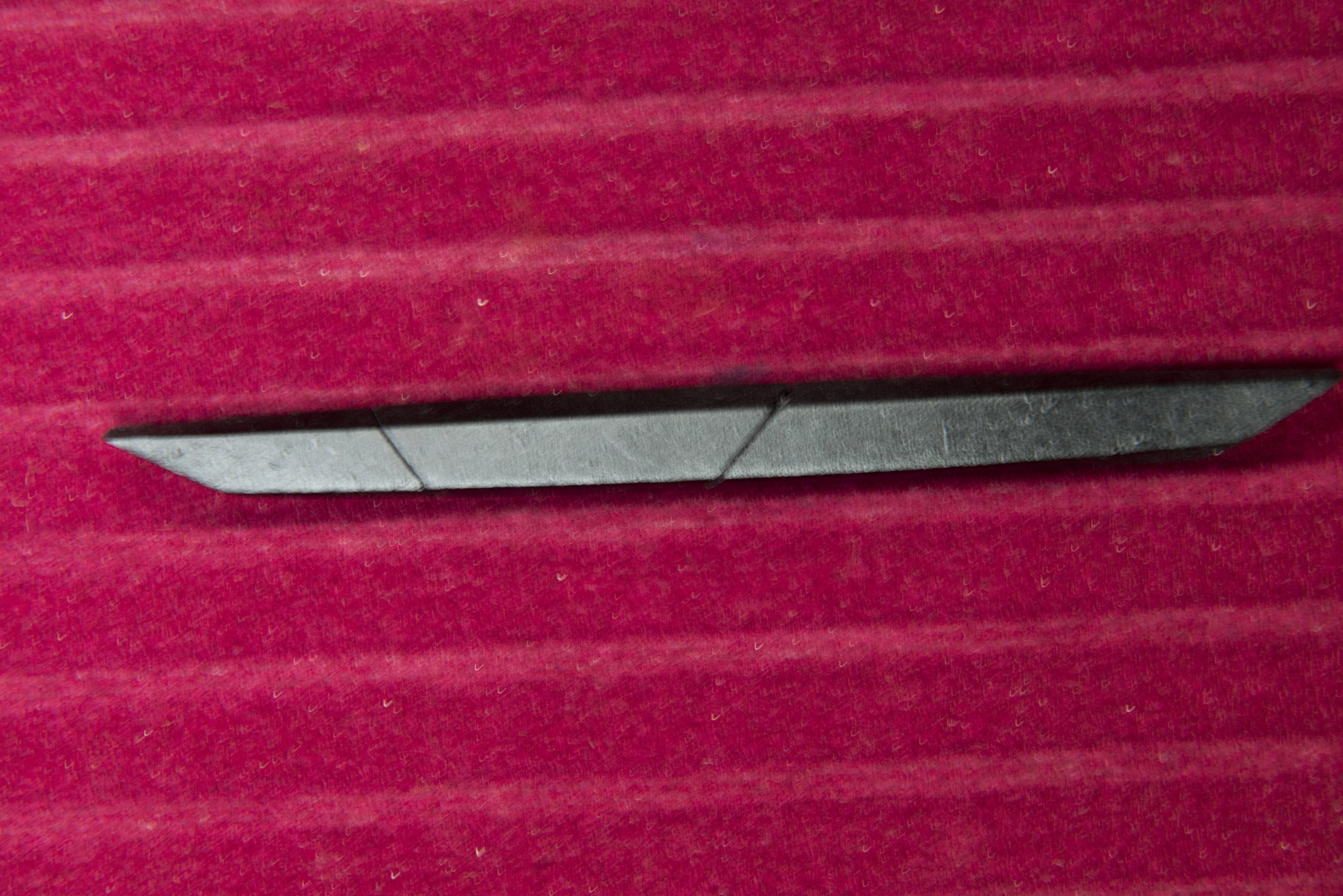 So what do I think of the pen.  Well it is interesting and unique in design.  The angular shape continues along the pen with steep indented slopes at the front and rear, giving the side view an almost boat or canoe appearance.  The material feels like it was 3-D printed with a home machine.  It is light, feels ok, and but also looks cheap.  The textured pattern does not help.  It helps with gripping the pen but close in looks like a poor finish and from afar just looks cheap.  A shame really as it serves it’s purpose reasonably well. 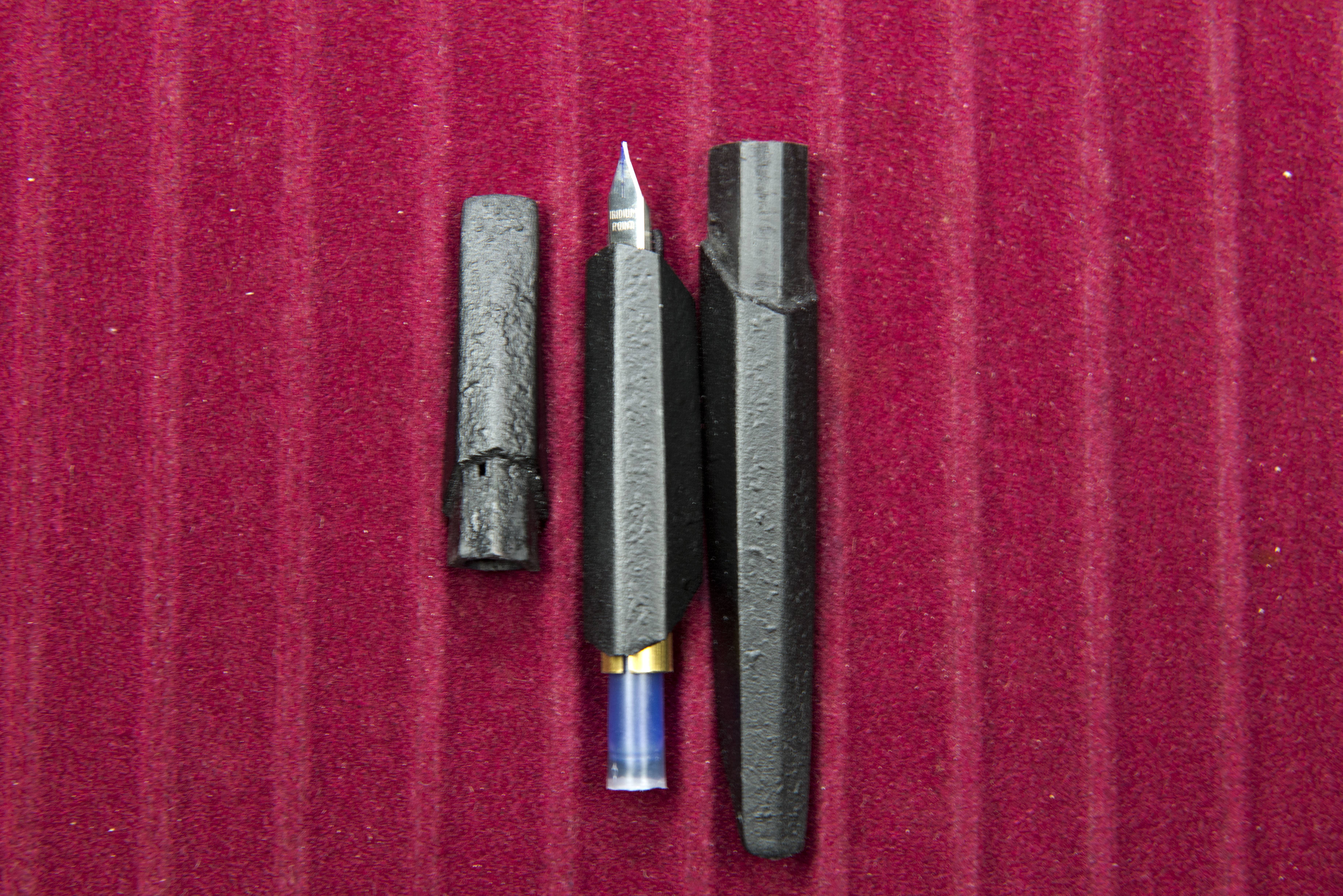 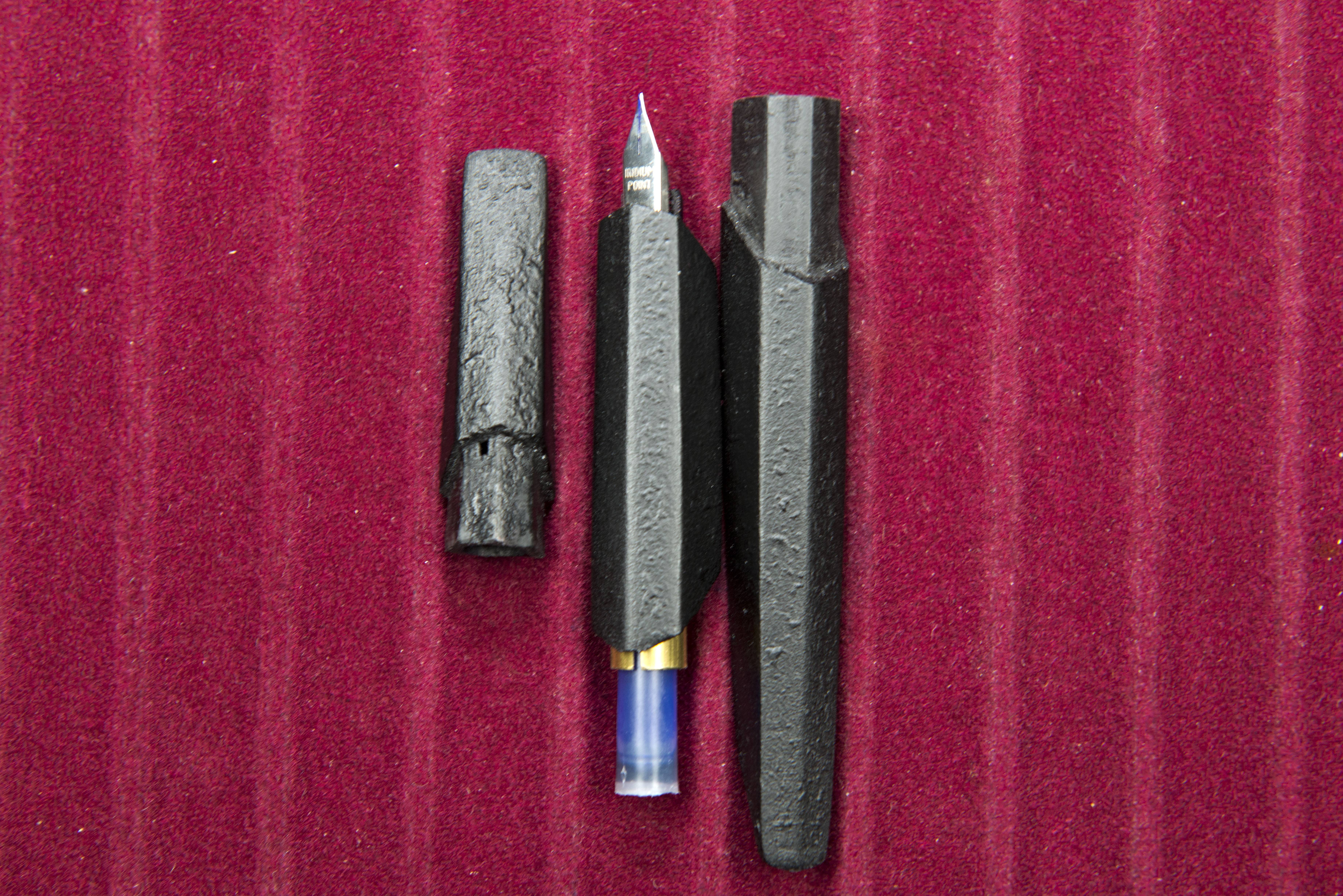 The pen is in three pieces.  Cap, section and barrel.  Perfectly normal, except in the way they are implemented.  The cap slides on to the section with a tube (matching the shape of the outside of the pen) that moves over the nib.  It is both difficult to remove and to put back on, though it is guided well enough that I do not believe the nib is at risk.  The barrel again slides on to the section in the same manner, this time over a brass clutch which also houses/guides the cartridge.   This feels easier to remove and replace, though just now I’ve found that if you hold the cap and barrel and pull, the cap comes off each time – so the clutch does work well.  Side on you can see that the outer components and the section are angled inwards.  This fits well with the looks of the pen, however the gaps between do leave the feeling that the tolerances in this pen are poor (though it should be remembered there is material below each gap so the pen is sealed)

(it should be noted that comments in the previous two paragraphs might be addressed by a change in material being used for the second batch, if/when it appears, also apologies for the quality of some of the photographs.) 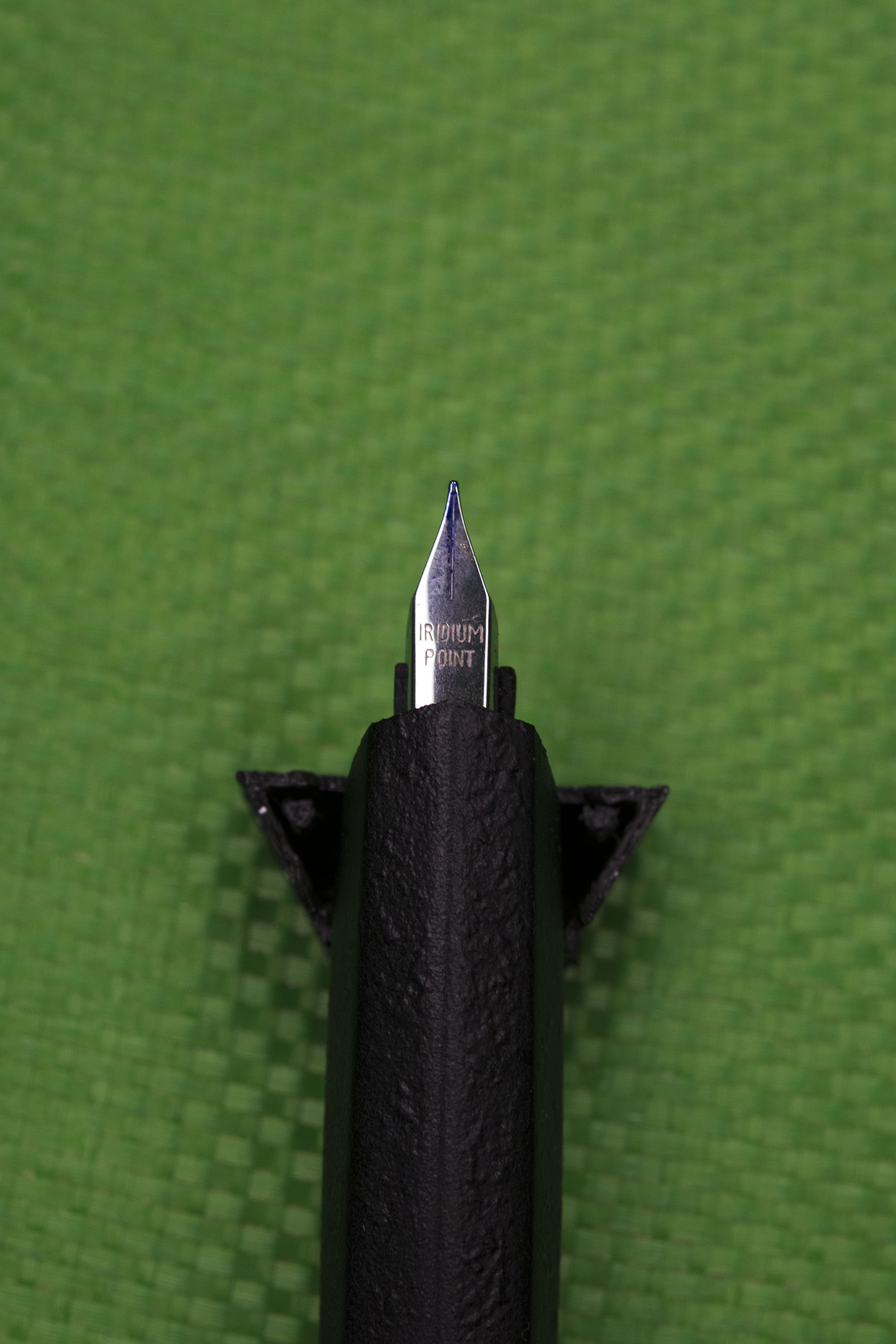 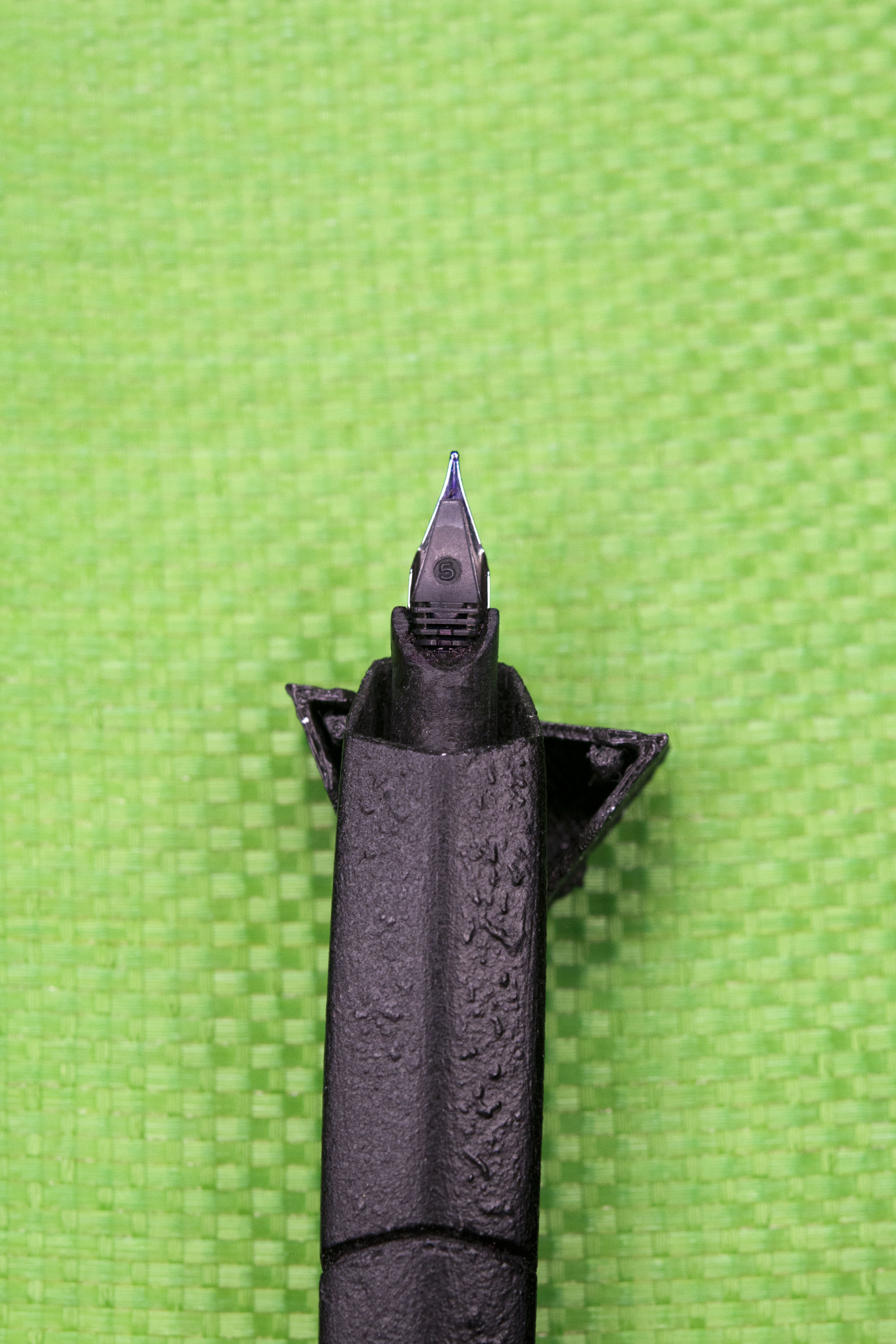 The pen was available in extra fine,  fine or medium sizes.  I went for extra fine.  The shape of the nib did change as the cost of the original one increased (I suspect this was down to JoWo changing the minimum numbers for bulk purchases).  The arrowhead went and a more angular shaped nib appeared (also this may now be from Schmidt).  This did result in a slight design change and I think it actually is a better match to the over all shape.  Writing wise the nib does it’s job, but with little character.  Being a generic EF I would not expect much else and it has the usual slight scratchy feel you get with this size.

Ink wise, the pen takes a standard international cartridge.  There is not enough space inside the barrel to take a normal converter and I did not have a spare short one to try.  The brass clutch that holds the barrel to the section also acts as a guide to the cartridge, which is easy to push home.

Comfort in the hand is always key and this is where this pen does go horribly wrong.  In theory, with the classic tripod grip I use, it should be easy to hold.  The four top faces should make things simple, giving lots of options, however for me the only times the grip felt fine the nib was at an odd angle.  Holding the pen with the nib straight, or slightly angled (as I rotate my pens about 20 degrees anti-clockwise) feels awkward, odd, unnatural.  Interestingly, holding the pen rotated at 180 degrees, as the D’Art was shaped, and it is even worse.  The experience of creating the writing sample at the bottom of this article was enough to make me want to put the pen down.  It is that bad. 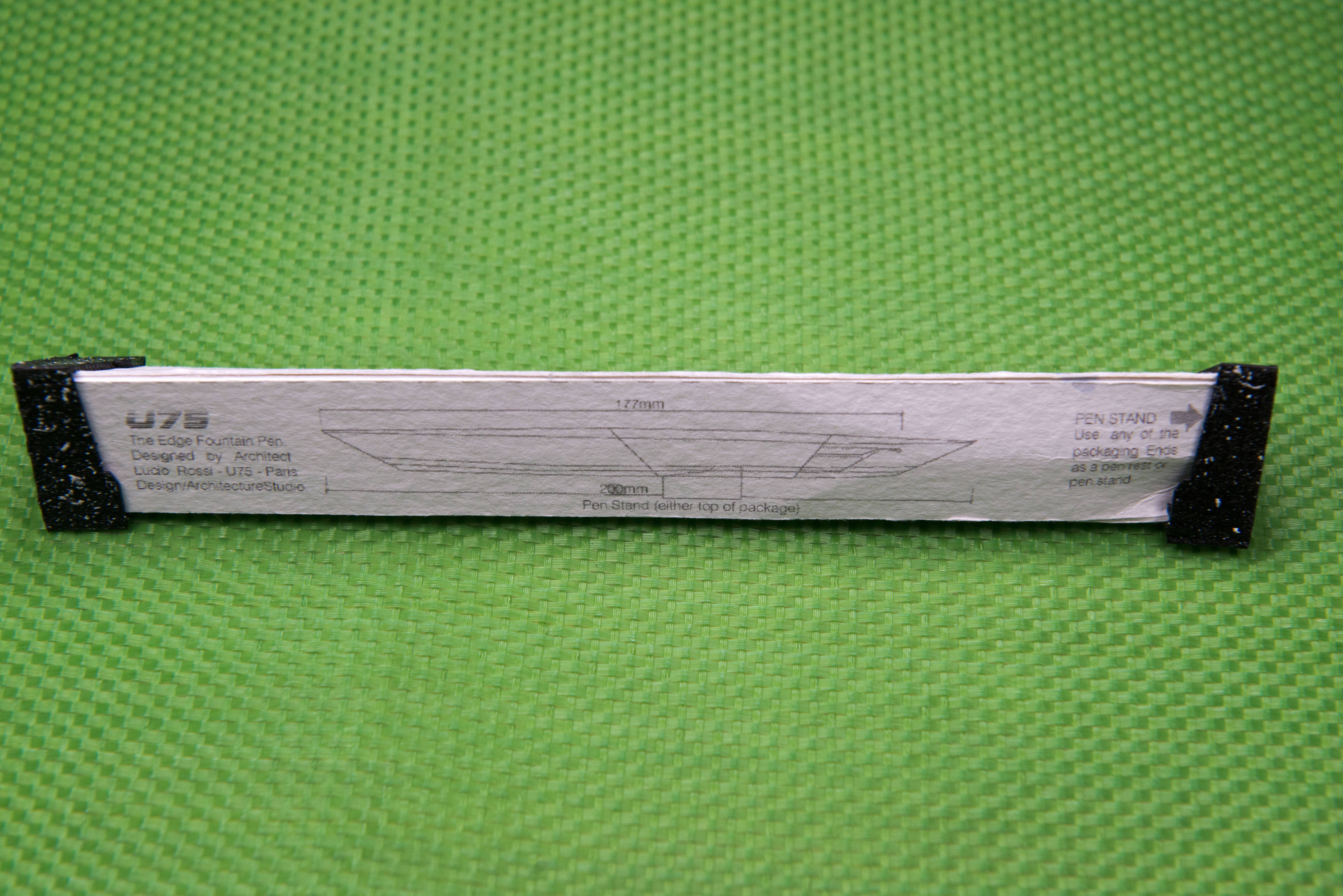 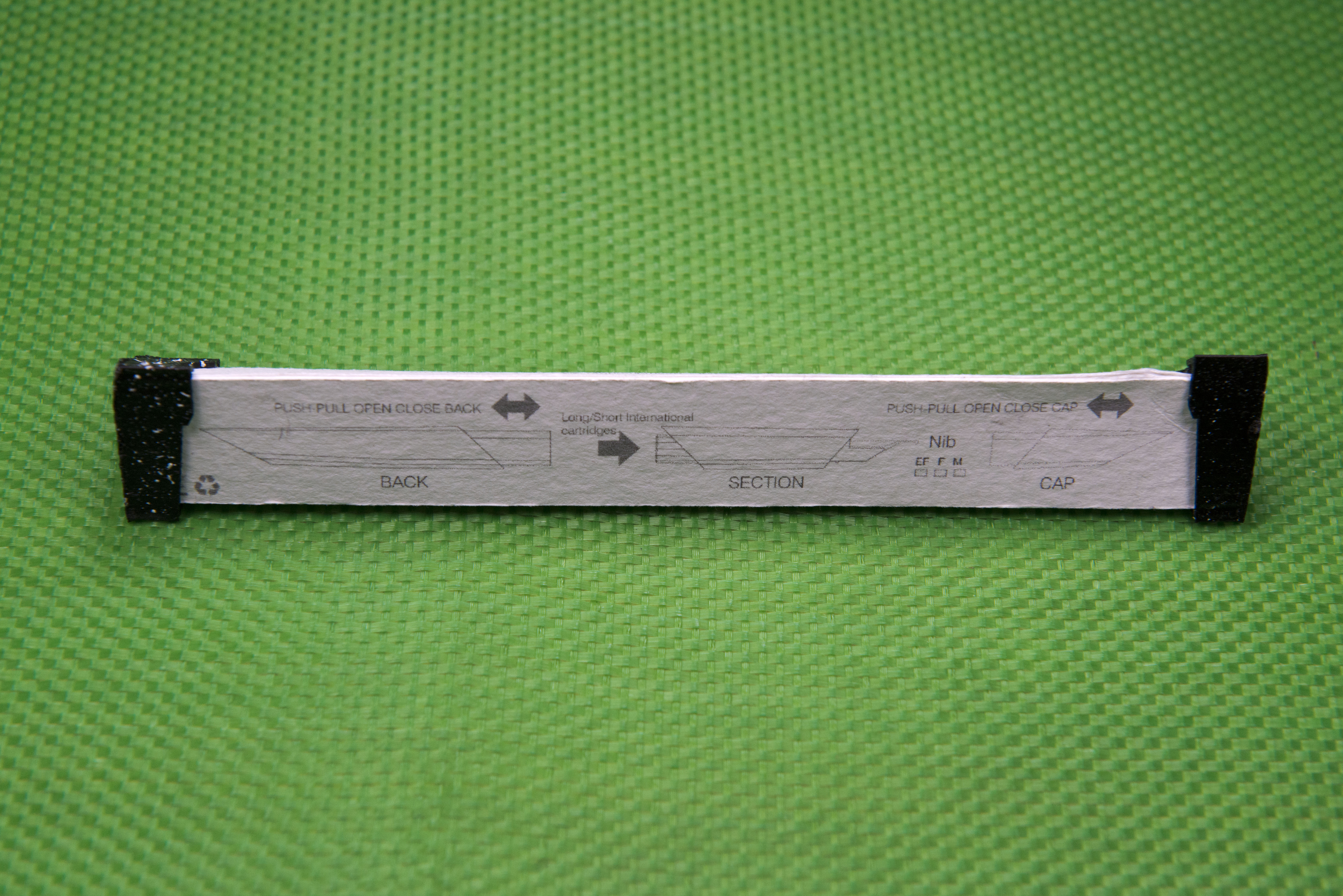 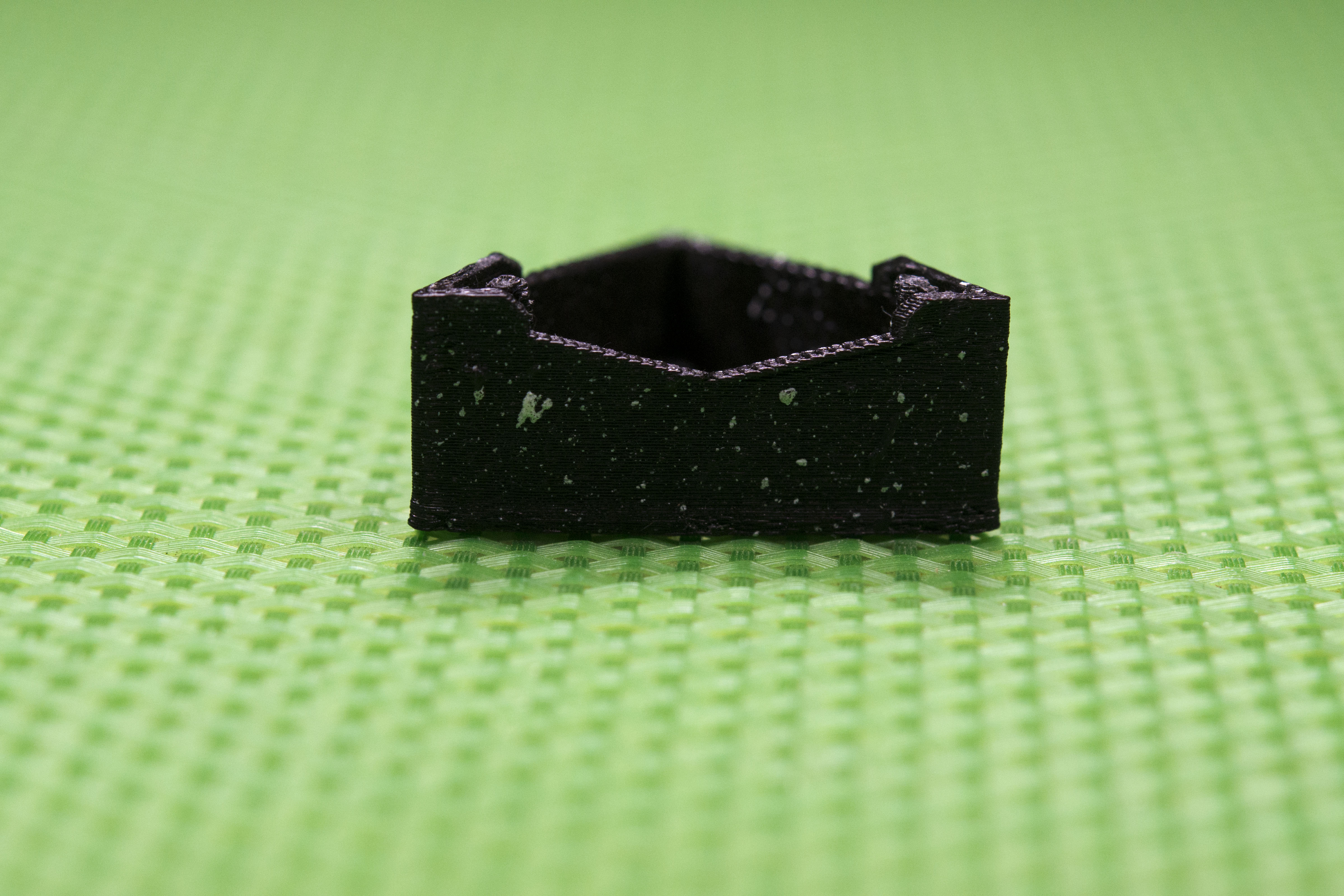 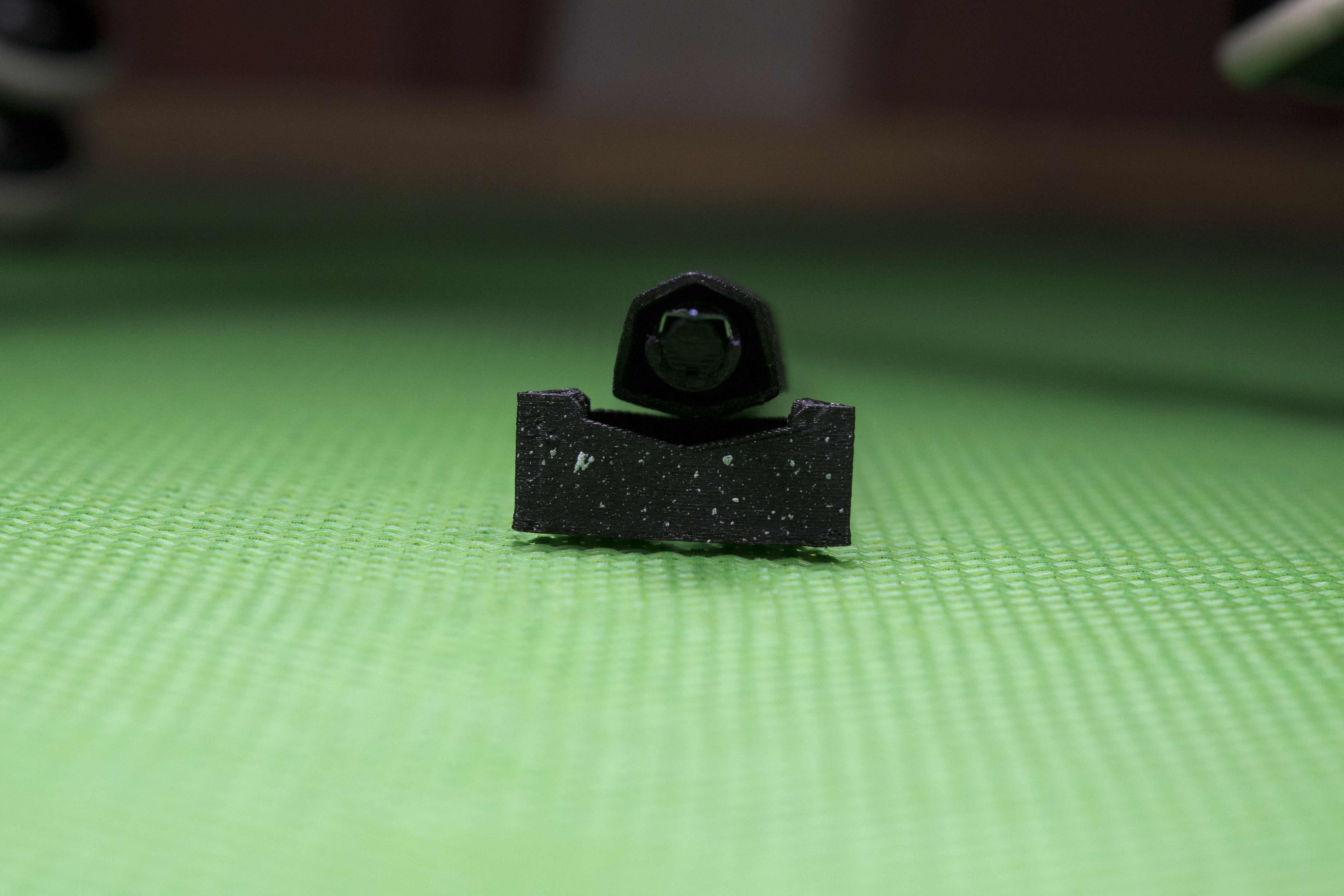 One thing I do need to mention is the packaging.  It is both minimal and clever.  A triangular cardboard tube is capped at either end by a triangle made of the same material as the pen.  Looking at each of these and you will notice one end is higher than the other two, with a pen shaped indent.  Quite cleverly these ends are designed to be used as pen rests for the Edge and do the job very well.  Additionally all instructions are on the sides, removing the need for an additional booklet.

So in summation.  The pen is interesting to look at and there are  some nice ideas in the design.  Also it is cheap, however at the same time I’m not convinced it’s that well made and it is uncomfortable to hold.  Do I regret buying it, I think so, but not entirely.  Certainly if I had not I would not miss the pen being in my collection.  From a Kickstarter perspective I think I was lucky.  Back in September I wrote a piece on the risks of Kickstarter, and included this pen.  Since then my views have not changed and you will note that even just a few days ago people were still complaining in the campaign comments they had not received their pens and the last reply in comments and post in the update section by the creator was 7 months ago.  I think the sudden move from VENVSTAS to U75, with the closing of the Kickstarter account for the former should have rung alarm bells, or if it did many of us chose to ignore them. 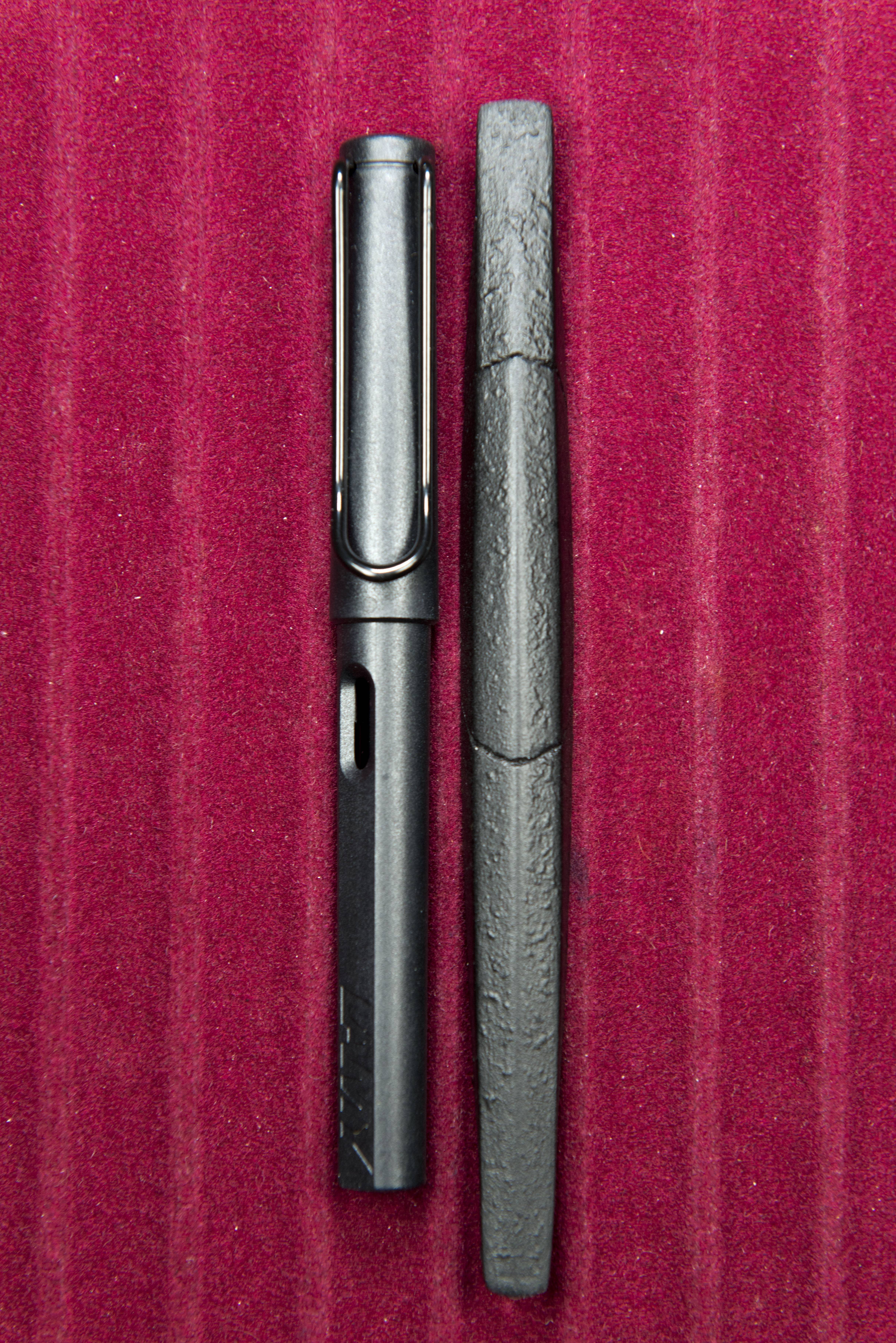 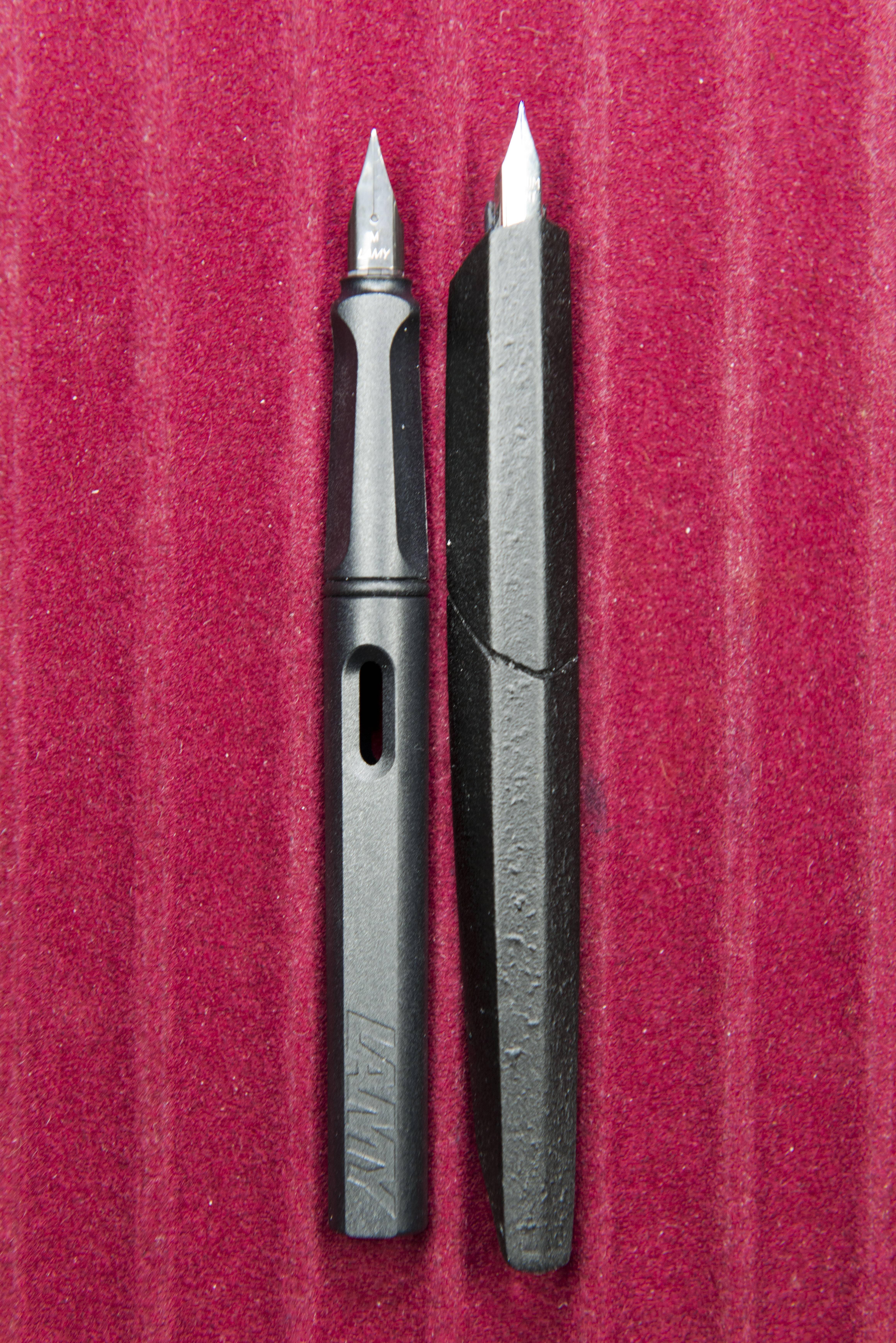 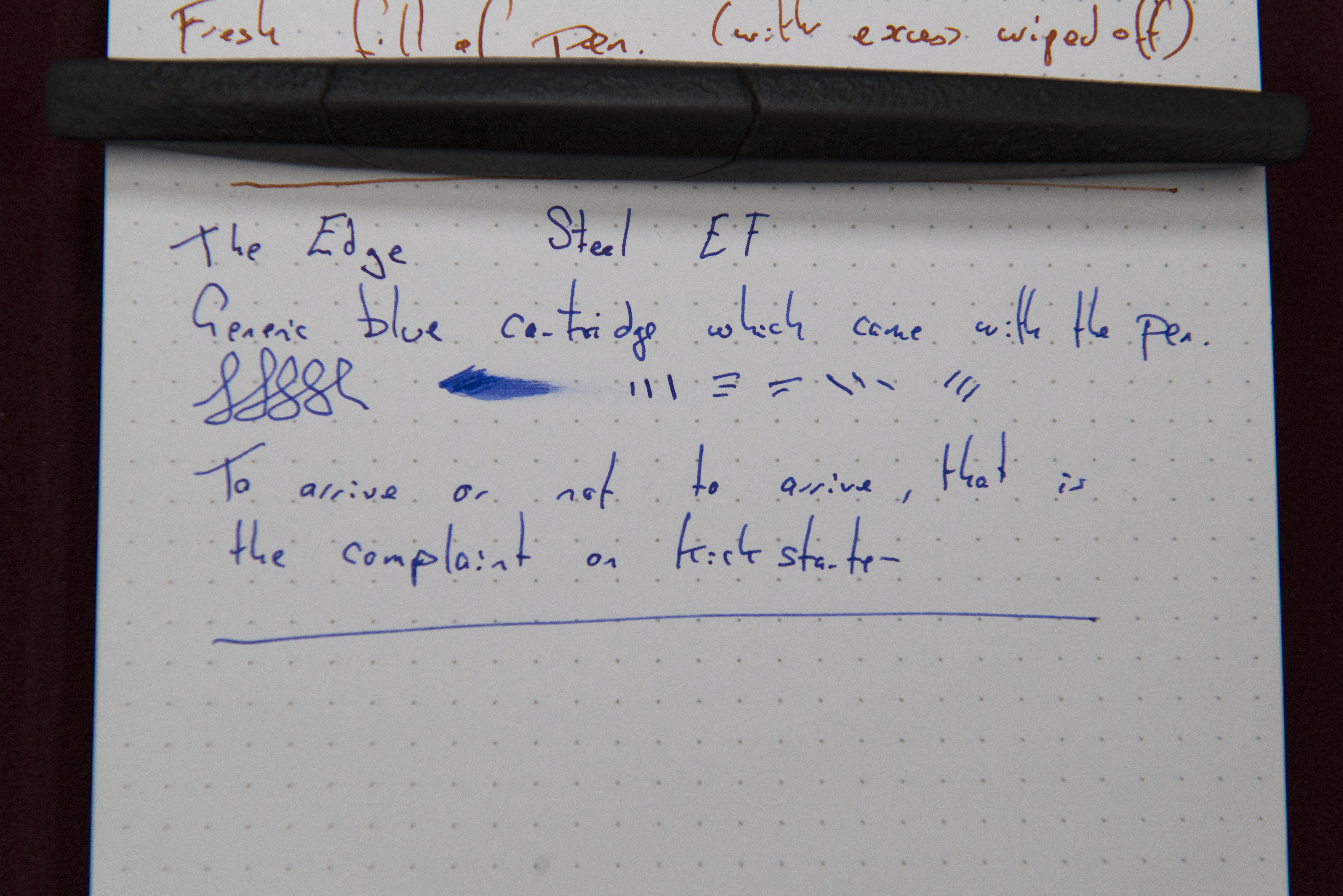 3 thoughts on “The Edge – a budget pen from Kickstarter”