Most people who are involved in the pen world are aware of the Sailor King of Pen.  A range of over sized fountain pens with a 21k nib available either as a medium, broad, or a hand made naginata (supposedly while Nagahara-san has retired, his son is meant to be restarting a limited set of the range).  Most commonly found in the cigar shape of the 1911/Profit and ranging from acrylic, through the eponymous ebonite version and on to high end and high art Maki-e master pieces, the KoP is also found to a lesser extent with the flat finials of the Pro Gear shape.  Over the last number of years there has been a limited edition release of the latter based on the five Japanese elements, starting with Wind (2016), then Earth (2017), Ocean (2018) and now Fire (I expect ether/heaven will finish the set next year).  The same Pro Gear limited edition can also be found in regular and slim sized models.

Anyone who knows my taste in pens and nibs may be surprised I would consider buying a Sailor.  Sure many consider their nibs to be the finest out of the box regardless of nib and pen size, but they are of a stiffer, more pencil like experience, where as I prefer the softer more bouncier nibs.  The difference comes at the top end with the 21k King of Pen nib.  The size, along with the shape of the tines, results in a bounce and flex you do not find lower down.  There is still a hint of tooth, but the level is dependant on the paper type and it is barely noticeable on the higher quality, more fountain pen friendly brands. 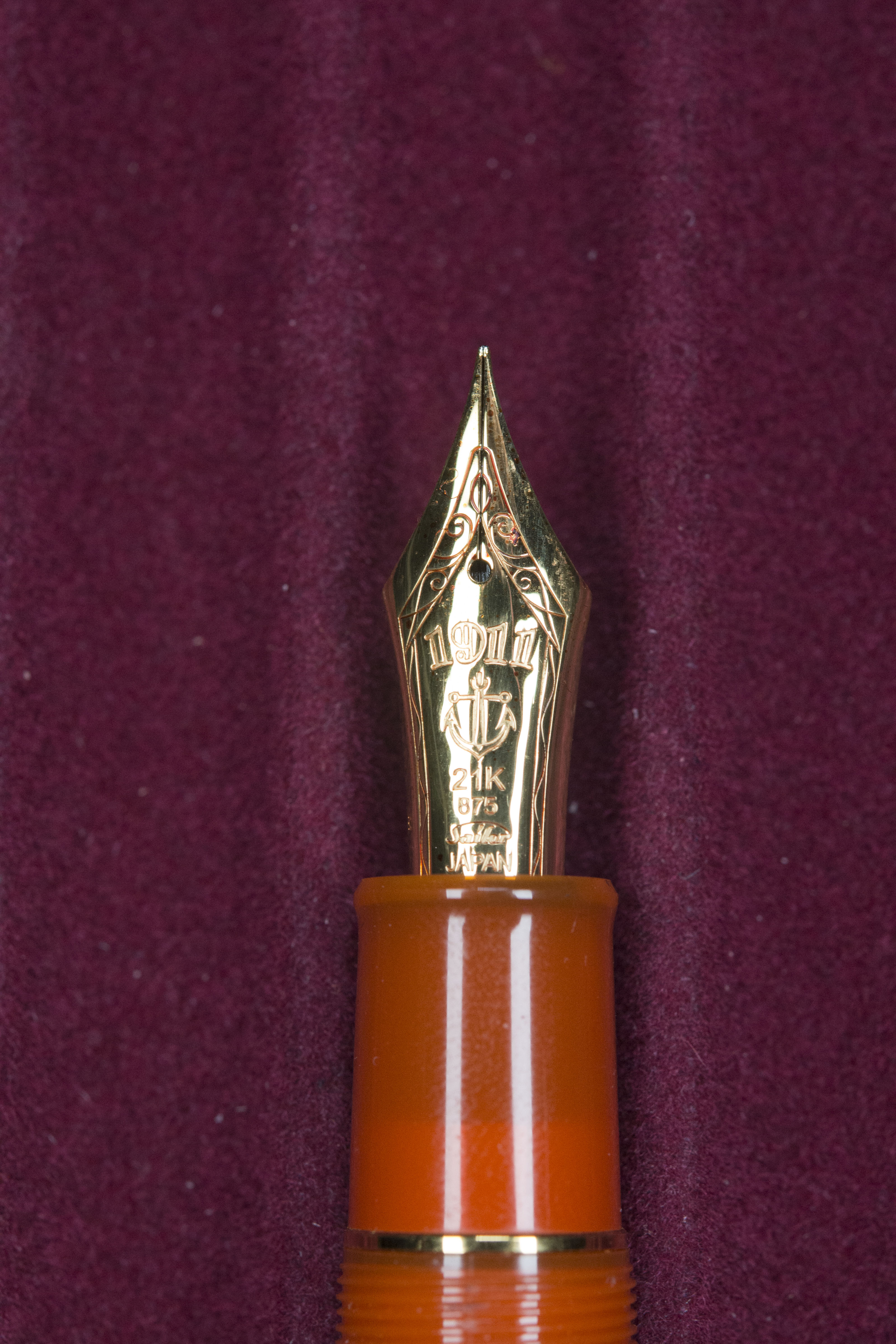 So it has been several months since I picked up this pen at the London Pen Show.  I had previously been tempted by the Earth model, but by that time I decided to commit it was sold out.  With the Fire release I was in two minds.  To western tastes it should be a vivid red, maybe with hints of yellow, but as with the previous two elements this has a more cloudy look rather than the brightness of the original Wind range.  It is still transparent, but only really with a light shining through the cap or body.  The colour itself is less red, more orange and very light sensitive.  Much of the time, including on the official photos, it’s a warm golden orange colour with some shadow to it (due to the transparency), however get the light just right and you see the glow of hot coals.  It’s a colour that grew on me, but certainly is down to personal taste.  Looking back at on line reviews of the Earth and Ocean editions you see similar comments.  The clip, bands, and nib are all gold in colour, with the metal work matching the nib. 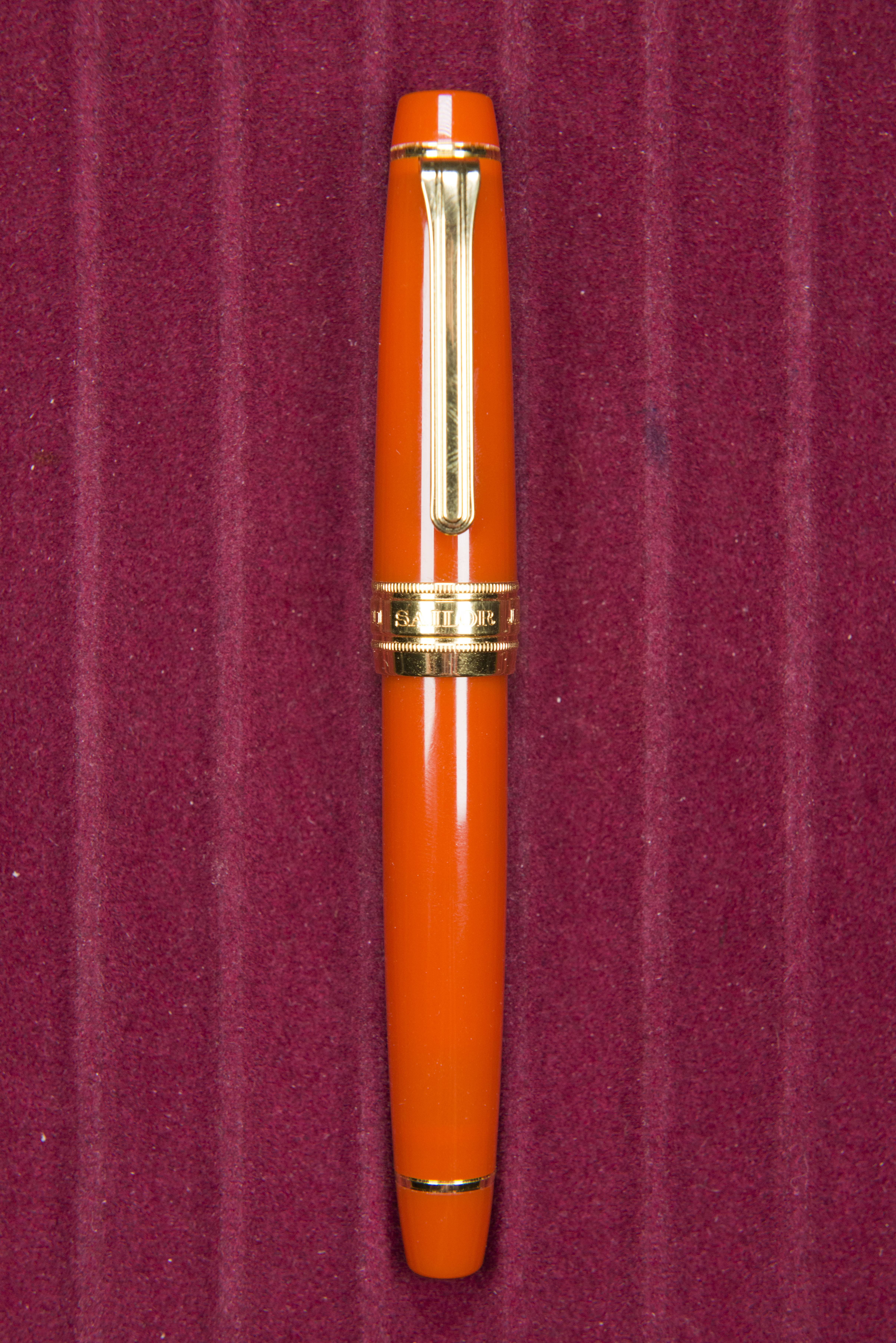 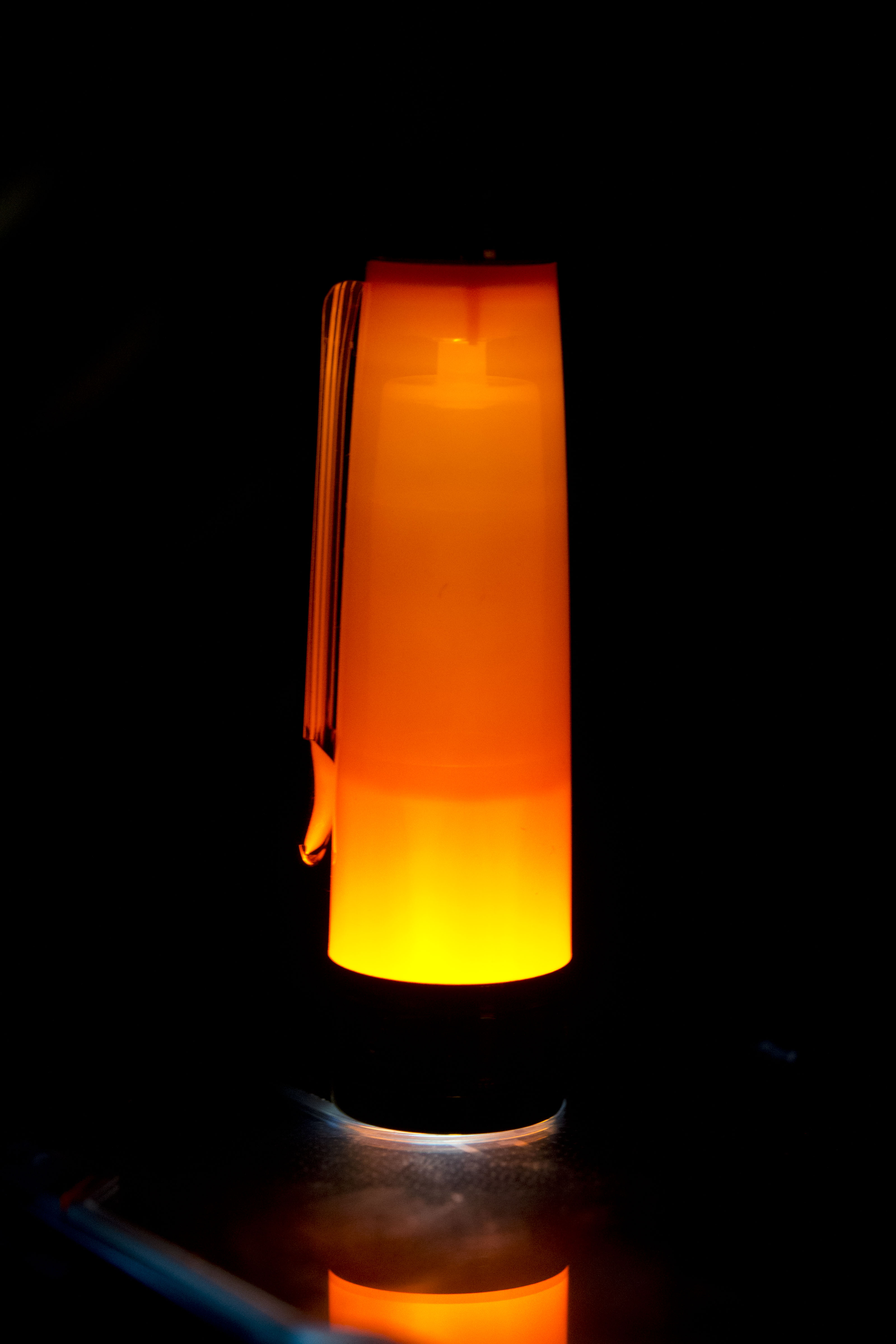 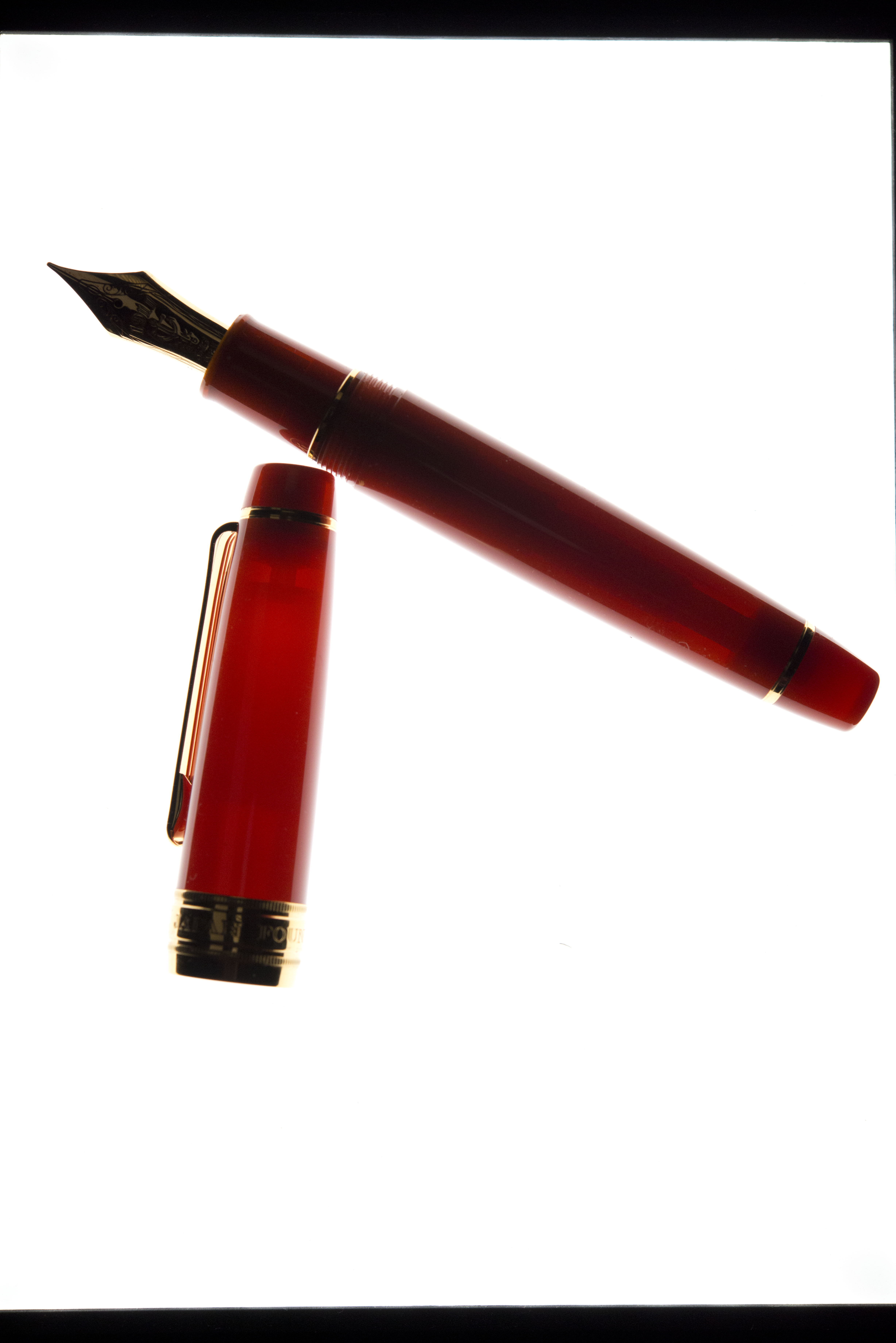 Size wise the pen is large.  It’s not too dissimilar in size to a ScriBo Feel.  While I do not own examples to compare it with, I would also consider it in the same size band as the Montblanc 149 and Pelikan M1000, both of which are direct rivals.  The Pro Gear shape saves about half a centimetre on both the cap and barrel, though balance wise you would not notice.  The size also means it has girth.  People who prefer thin pens will struggle with the KoP.  The body and cap curve away from the centre, producing nice but slightly generic portions. 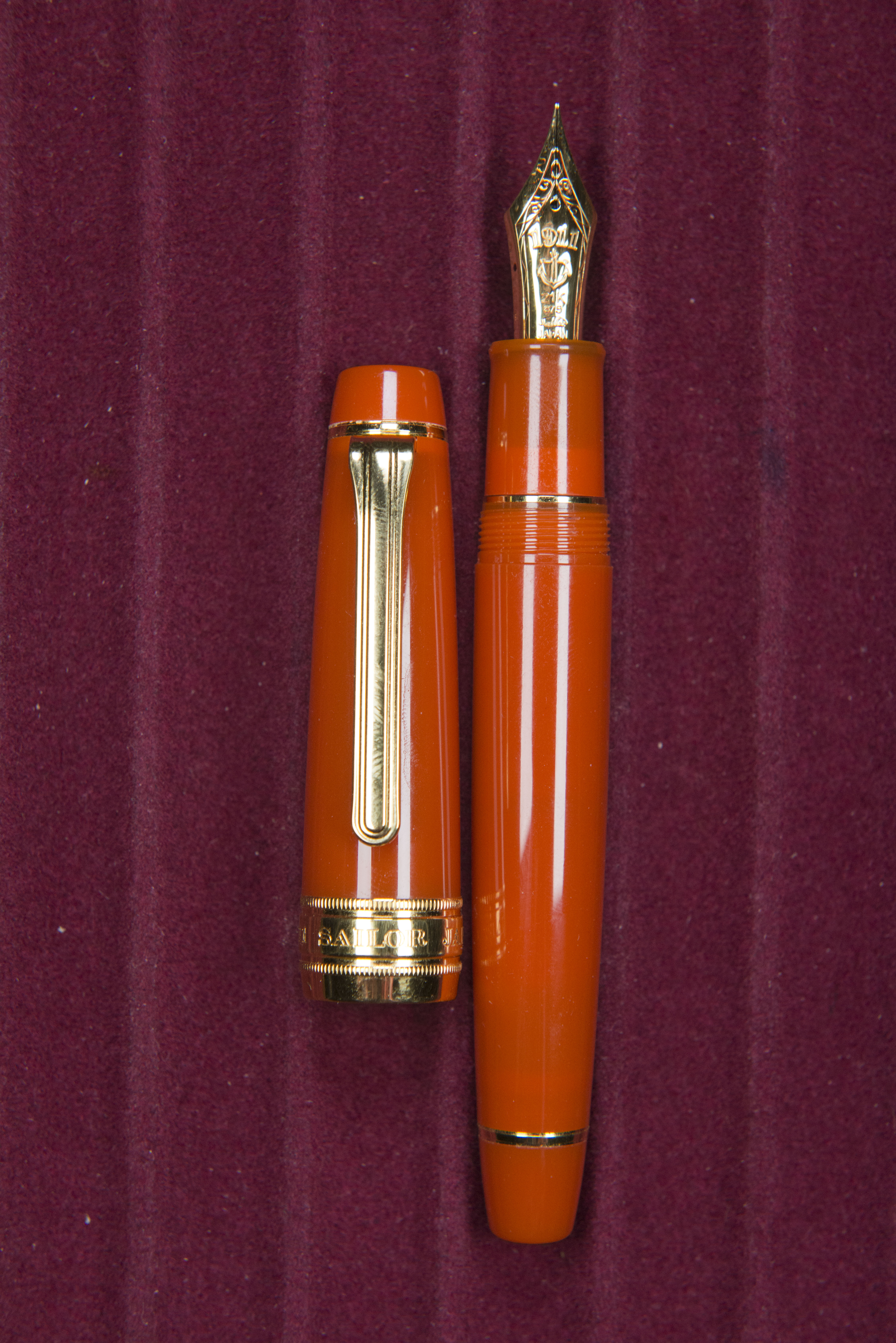 The grip is quite short.  There is a small angled step by the nib to protect the fingers, while the section tapers lightly as you proceed back towards the the threads.  The ring is actually part of the inner threads/converter holding unit.  The threads are also angled out very slightly and extend the area by which the pen may be held.  It then meets a step.  Moving a finger across the threads and step you find they are surprisingly noticeable and can be felt if you hold the pen slightly further back.  It is quite disappointing that a pen at this price point should be flawed in this way. 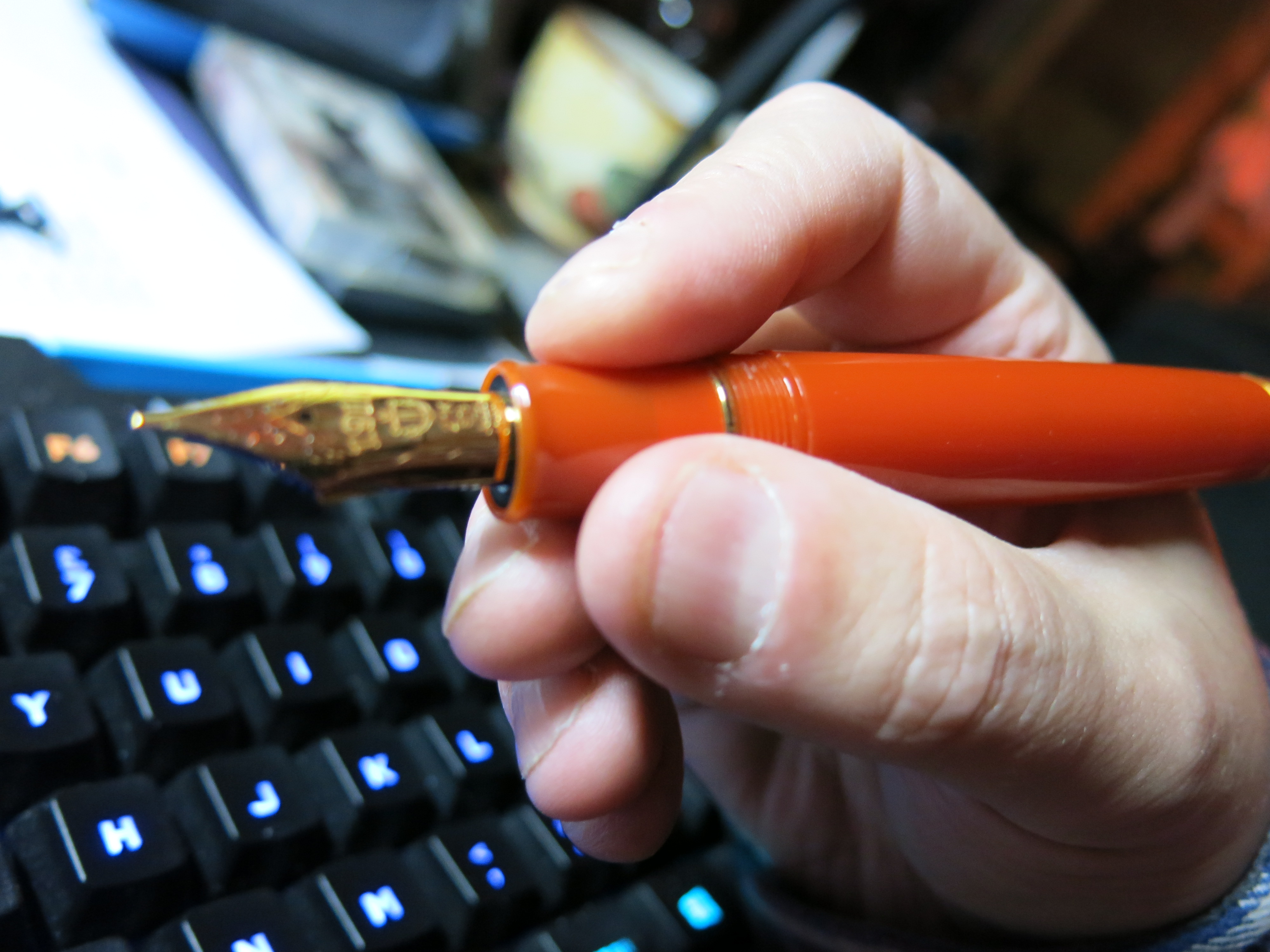 Holding the pen is a comfortable experience, as long as you are happy with the width.  It is heavier than you would expect considering it is made from an acrylic, though this is almost certainly due to the metal housing for the cartridge/converter.  It also means that the pen is very well balanced in the hand.  The cap can be posted and this does not add much back weight, though the balance point does move from just behind the fingers to the crook of the hand. 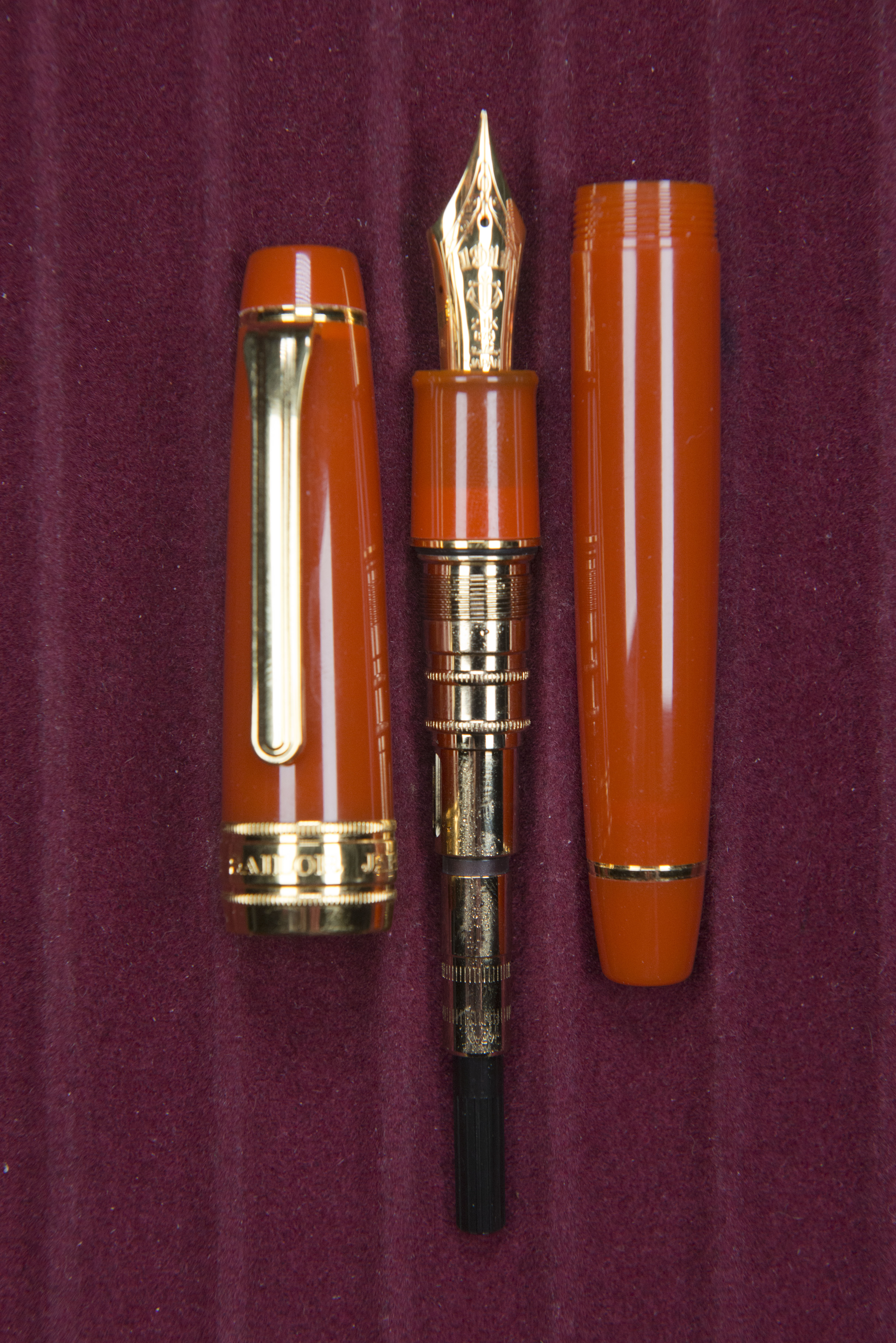 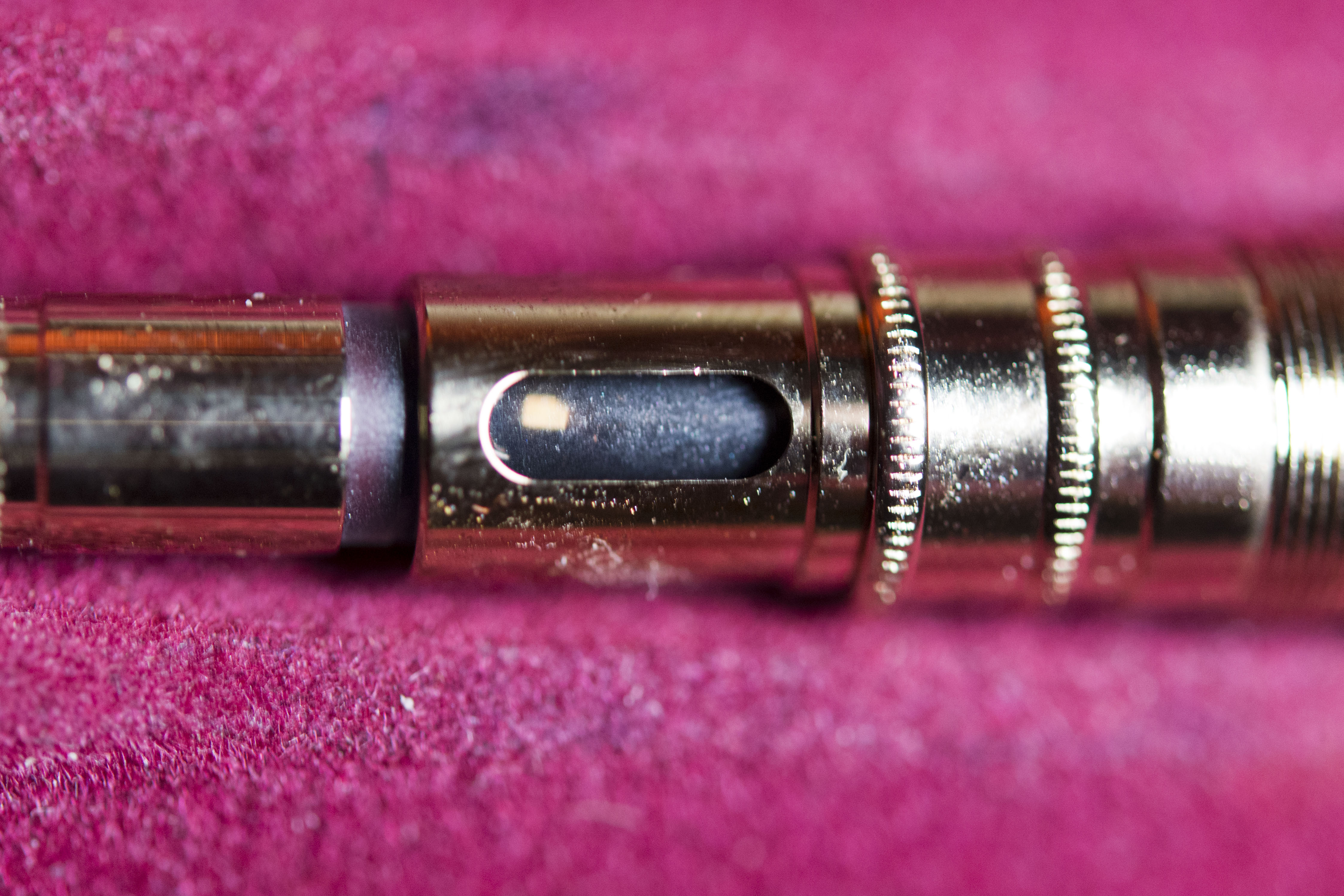 The filling mechanism is either converter or cartridge, using Sailor’s proprietary system.  The pen comes with a converter already installed and two black cartridges in the box.  So far I’ve had no problems, but the converter has been criticised for a comparatively small capacity, plus poor reliability compared to it’s rivals.  It is securely held in the housing and there are cut out windows on the sides to allow easy viewing of the ink level.

The writing experience is enjoyable.  The nib bounces nicely providing both a smooth action while also providing a bit of tooth, something which could almost be considered a contradiction.  Without applying pressure you get line variation, as you would on a semi-flex nib, and the ink flows well.  With the sample below it appears I am suffering from rail roading and ink flow problems, however post taking the photos and while proof reading this review I found the pen was virtually empty.  Filling it cured that problem.  Even when near empty the pen was happy for the cap to be left off for a while.

There is always an elephant in the room with any King of Pen, and it is the same for the Montblanc 149 and Pelikan M1000 (or even 146 and M800).  Cost.  When you look at the price for the normal sized pens and then compare with this top end model there is a very large jump in cost.  Sure you can talk about the art in the Maki-E models and even the cost these days for quality ebonite, but many KoP and KoP Pro Gear models are made from the same acrylics as the regular pens, yet cost two to four times as much.  This can not just be for the large nib.  Profiteering must be part of it – and yes the same has been accused of the other two manufacturers I have mentioned.  Looking at the Write Here website (where I got my pen from) the KoP is being sold for £675 (for Black Friday, it is reduced further to £607.50), down from £750 MRP, where as the Standard Pro Gear Fire is just £213.84 (down from £264) and the Slim variant is £111.78 (down from £138), so almost £500 for a slightly larger pen with the same material and a larger nib.  Note the stock 1911 acrylic KoP is still over £700!!

So what do I think.  It’s a large pen and anyone who prefers thinner or pencil sized writing implements is going to struggle.  It is also expensive, though arguably the price is in line with it’s rivals.  The acrylic is interesting but also very much affected by light and could be considered dull when inside.  Thing is I really do like it.  The nib is the real reason.  The King of Pen nib is arguably the best available out there and this makes the pen.  It is just such a pleasure to write with. 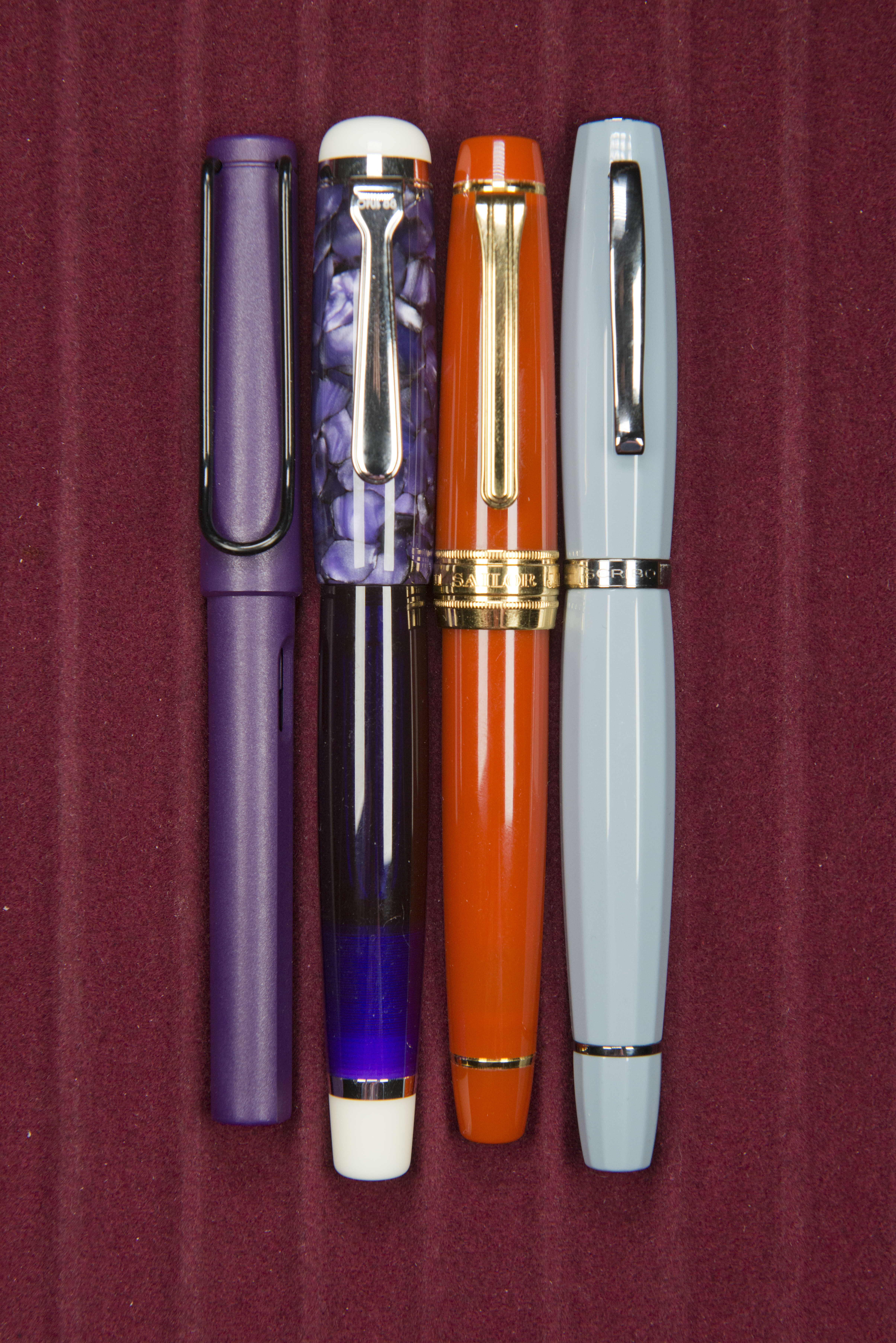 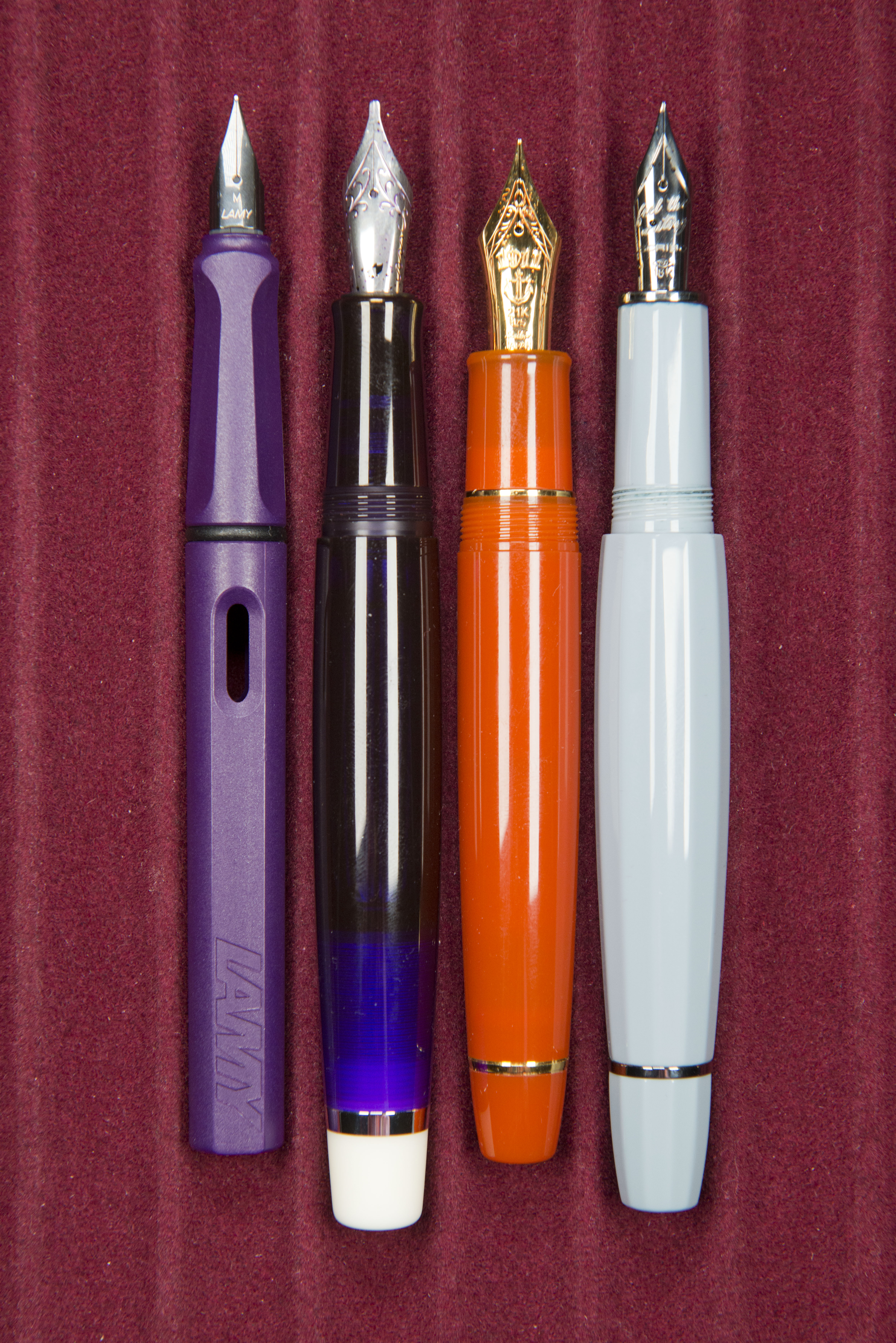 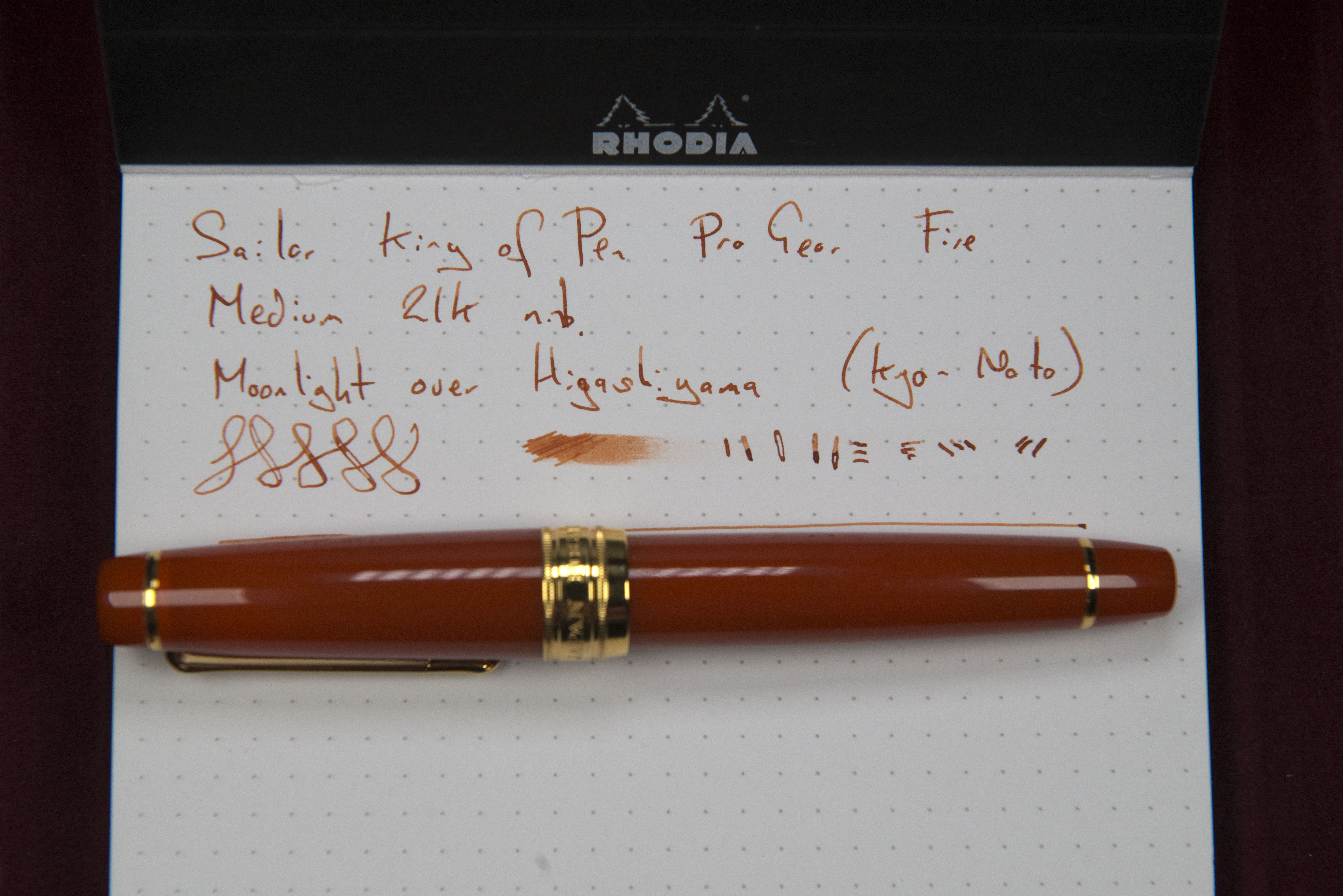 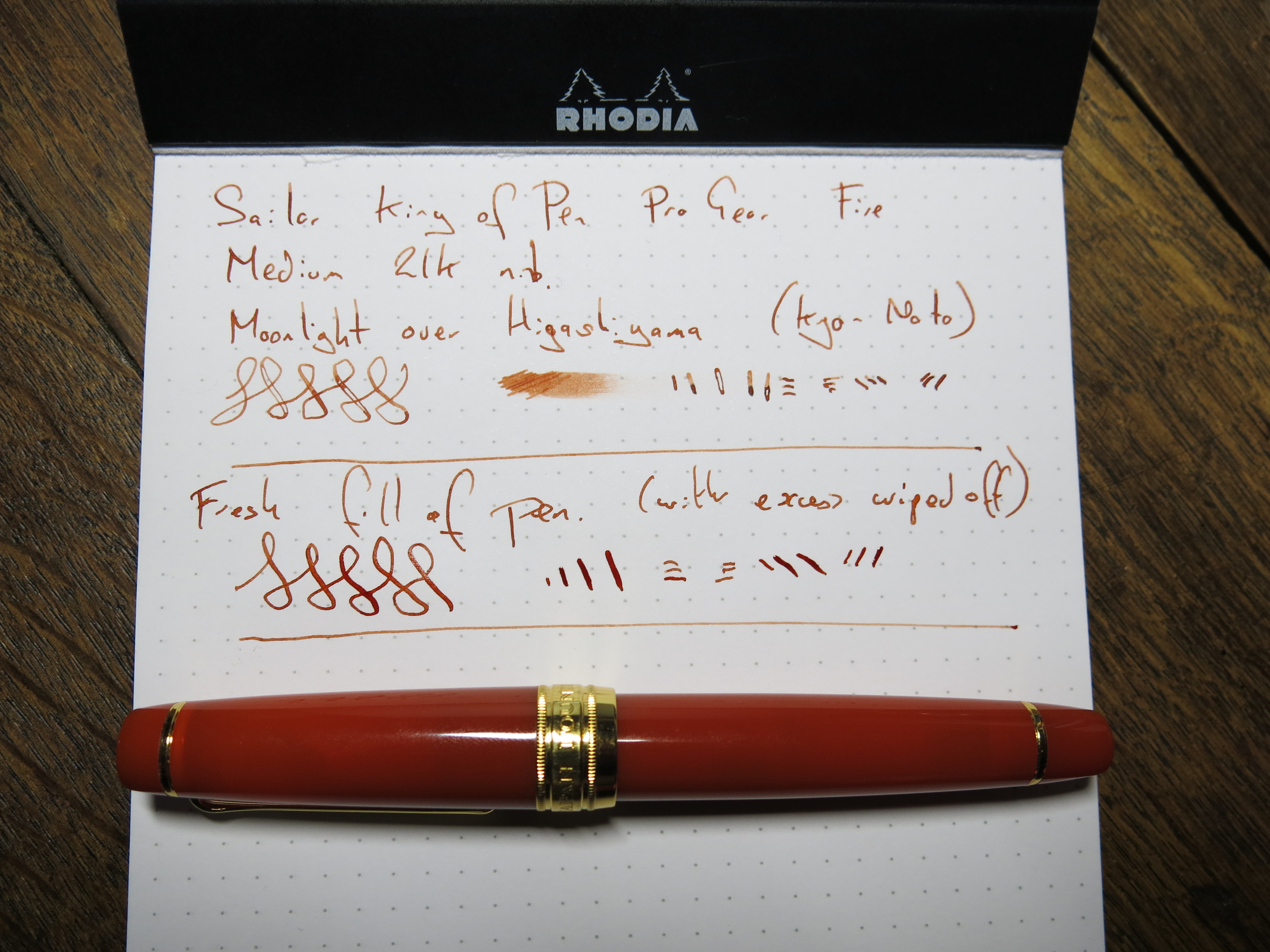 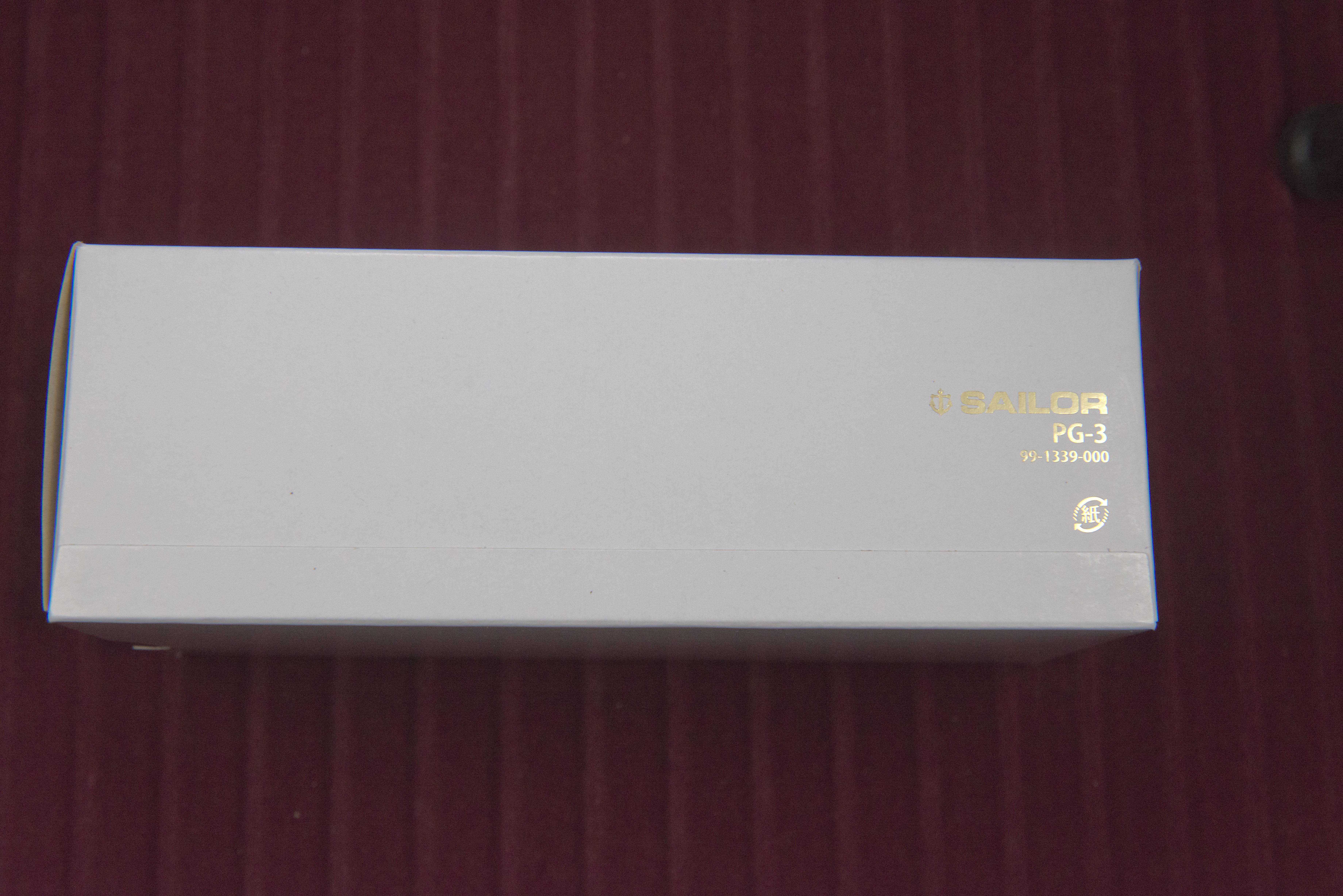 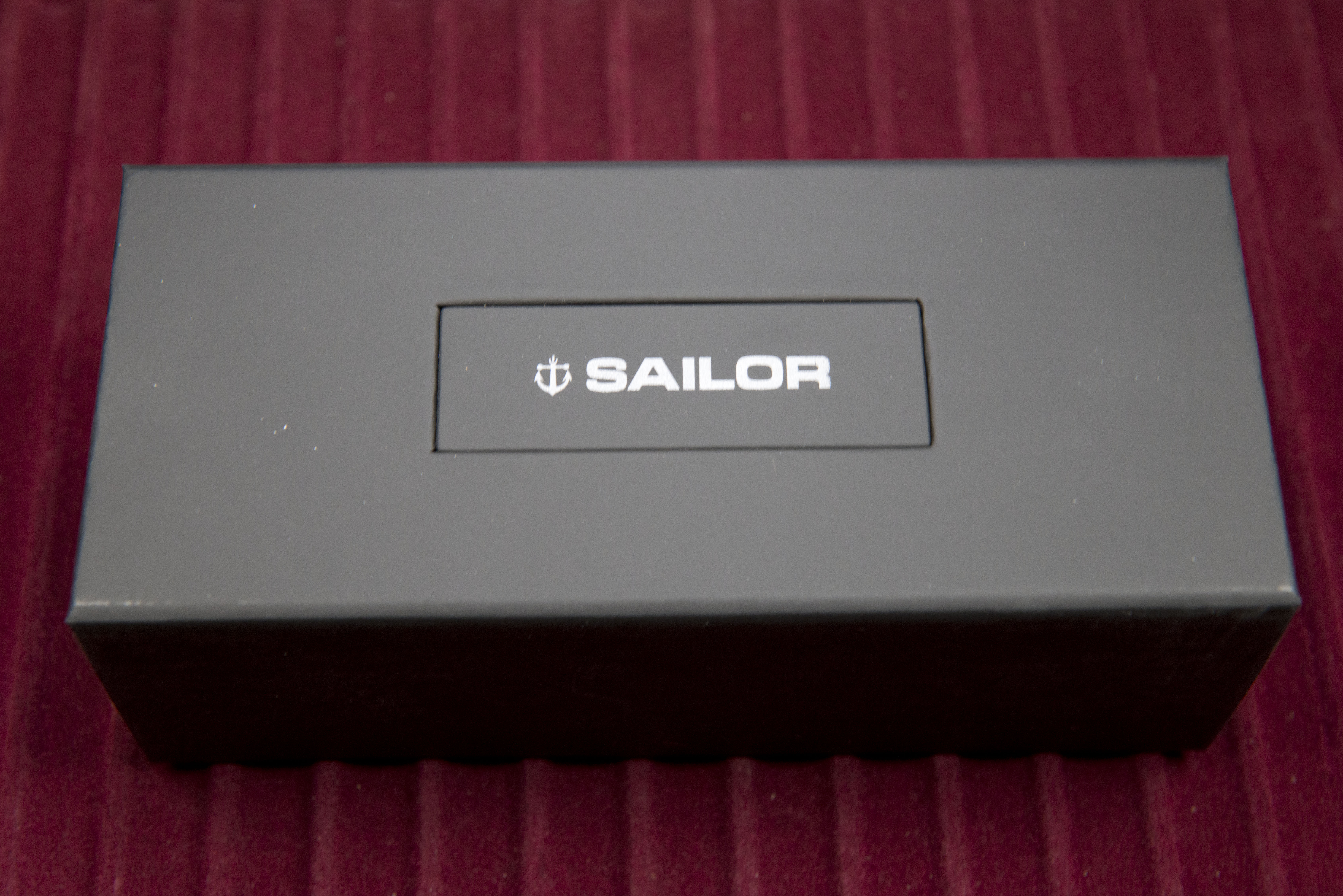 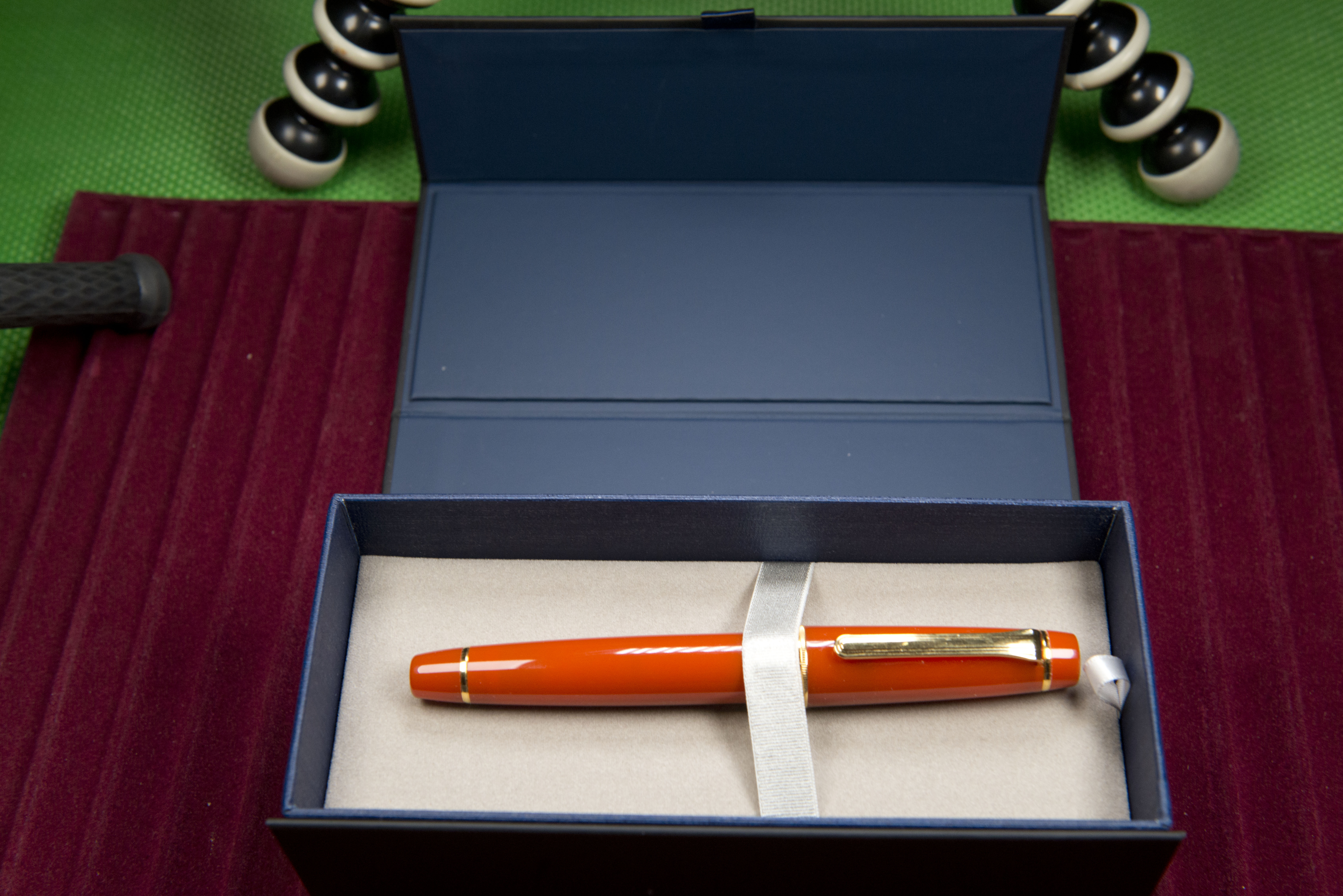 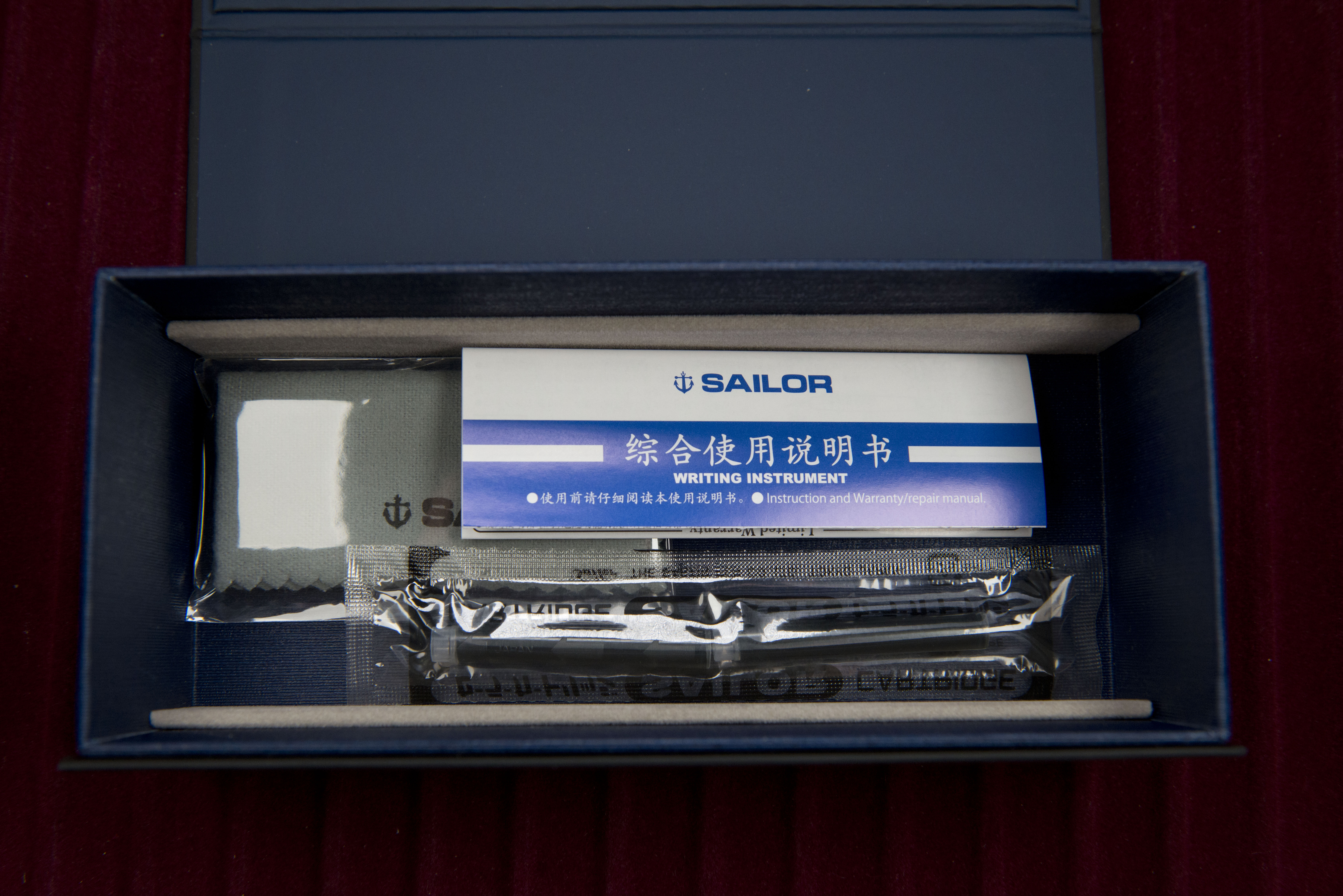 This pen was purchased using my own money at the October London Pen Show from Write Here.