Delta were around from 1982 to 2016/7.  During that time their most famous model was the Dolcevita.  Traditionally available with an orange body and black cap, grip, and blind cap, a latter day alternative was launched, the Oro, in a stunning crushed orange resin.  Available in silver and vermeil trims, it also should have come with either a 14k gold nib, or the infamous Delta Fusion nib (steel with a gold triangle glued on top ‘for heat dissipation’).  In the last days of the company, pens were fitted with what was available just to try and get money in.  The result, a Dolcevita Oro Stantuffo with a steel nib.

I picked this pen up at the October 2019 London Pen Show from John Foye of St. John’s Pens.  Towards the end of the days of Delta, when he was just a pen collector, not a trader, he bought three pens through an authorised dealer (I’m fairly certain I remember who he told me and they are a trust worthy company).  One of them was this Dolcevita Oro Stantuffo.  Now he was at the time, a collector not a user and so while it came with a non-standard nib, that did not bother him, but rather added extra interest, especially as he did not plan to ink it up (and in fact did not do so). 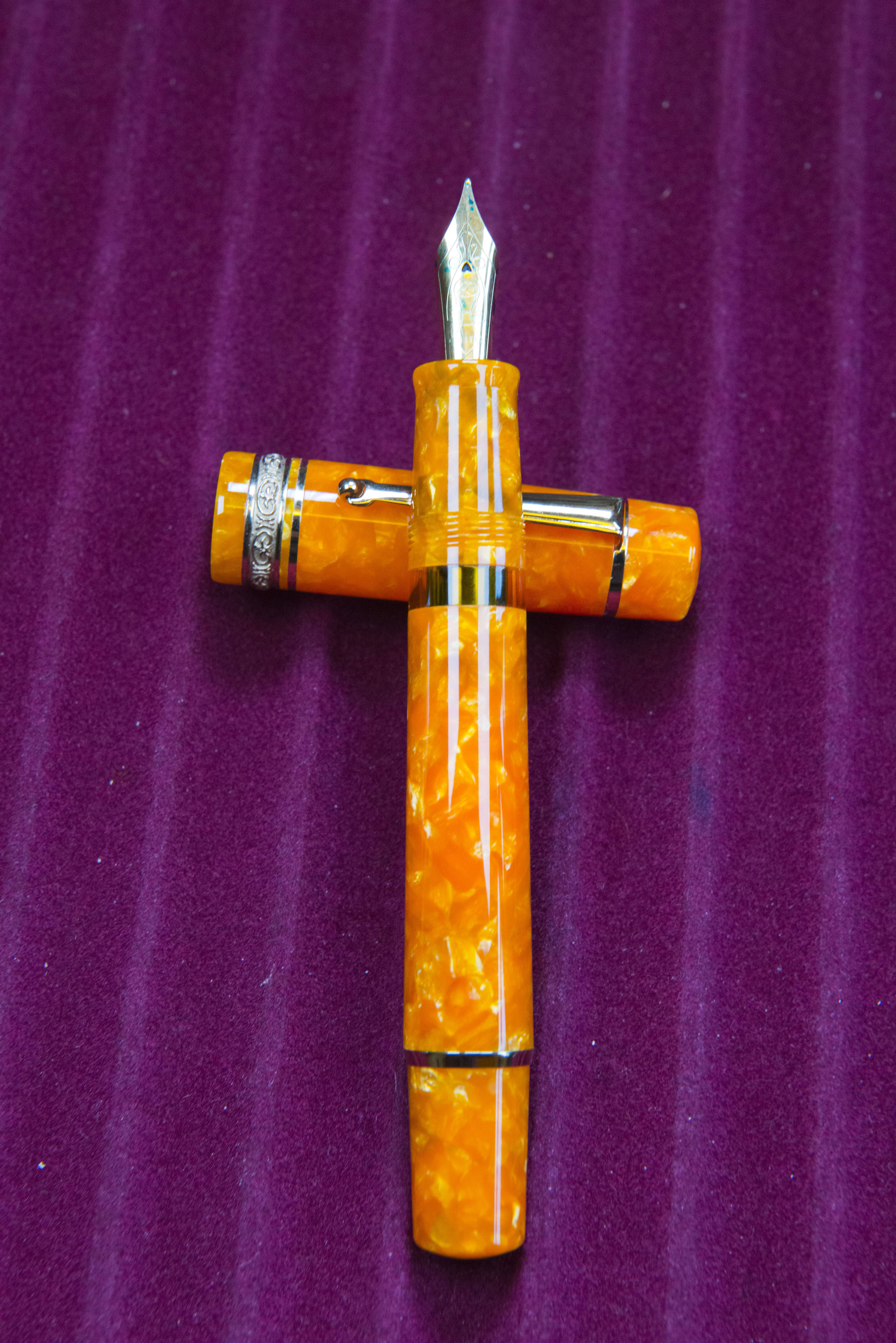 Move forwards three years and I saw this pen at his table.  Now since about 2014/2015, when I started to get back in to buying fountain pens (I never really stopped using them), I liked the idea of a Dolcevita, but my views at the time considered £50 to be enough to spend on a pen as it was a tool for work.  Oh how times have changed.  Net result was all Delta pens were out of my self set financial league.   Roll forwards to when Delta was in obvious trouble and their prices were dropping, partly due to a certain Italian discount (?) and auction store.  By that stage I was trying to buy OMAS pens before the prices got too high (to potential bubble levels which still do not make sense to me), so again I ignored the options – added to which a lot of people were complaining about poor build quality.  Of course now prices are rising, though not to the silly levels of OMAS and seeing this pen at John’s table I was reminded not only that I had been tempted before by a Dolcevita, but that the Oro version looked really good.  I mean REALLY good.

So what did I buy.  Look back at a Delta catalogue and just for the Oro range of Dolcevita fountain pens there were silver and vermeil trimmings, plus apparently rhodium plated (doing some research I found that on this cheaper version the wide cap band is laser engraved).  Then there were slim, normal and oversized models.  In addition, with the medium version, there was the option for the stantuffo system – the Delta piston filler.  Note from what I’ve read, this was only an option for the medium sized pens, so no oversized stantuffos.  Finally these eight size/trim colour options (12 if the cheaper rhodium plated version did exist with the Oro) there was also the options of the usual variations of both 14k gold and steel ‘fusion’  nibs.  In theory the latter were meant to be better than just plain steel as the gold, which was just glued by several points to the steel nib, was meant to affect the thermodynamic qualities of the nib – nope I don’t know anyone who actually believed that.  To make things worse with the marketing hype/disaster of the fusion nib, the gold sheet would fall off just by looking at it, never mind when carefully trying to clean the nib.  Thus this specific pen coming with a steel nib means that it is both unusual/rare, plus there is one less thing on it to break.

So I bought this Delta Dolcevita Oro Stantuffo with a medium steel nib.  The box it came in was actually for a Delta ballpoint, possibly a cheaper model than the Dolcevita as it has no swing lid.  It also included a delta ballpoint refill, not a bottle of ink, showing just how much trouble the company was in at the time. 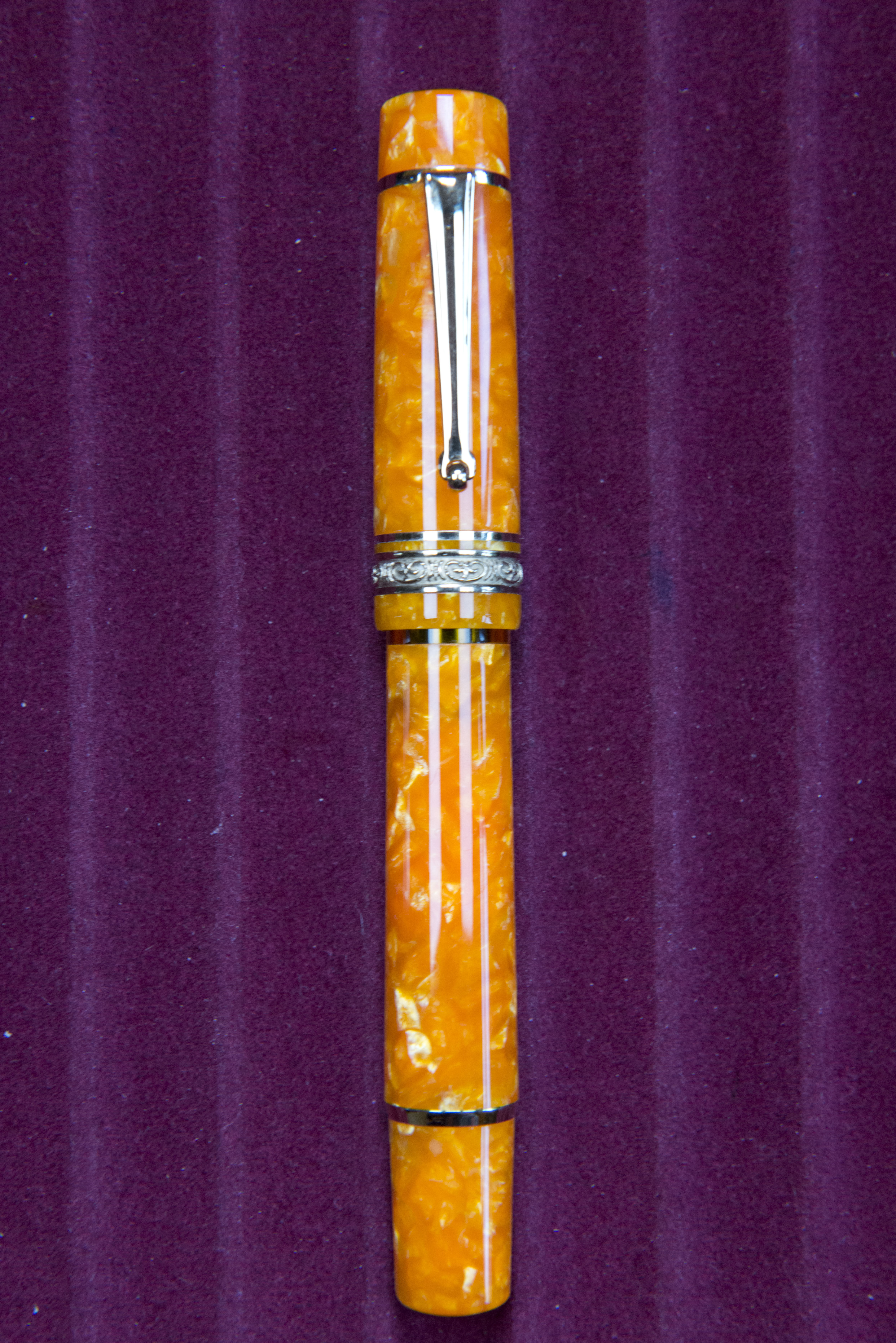 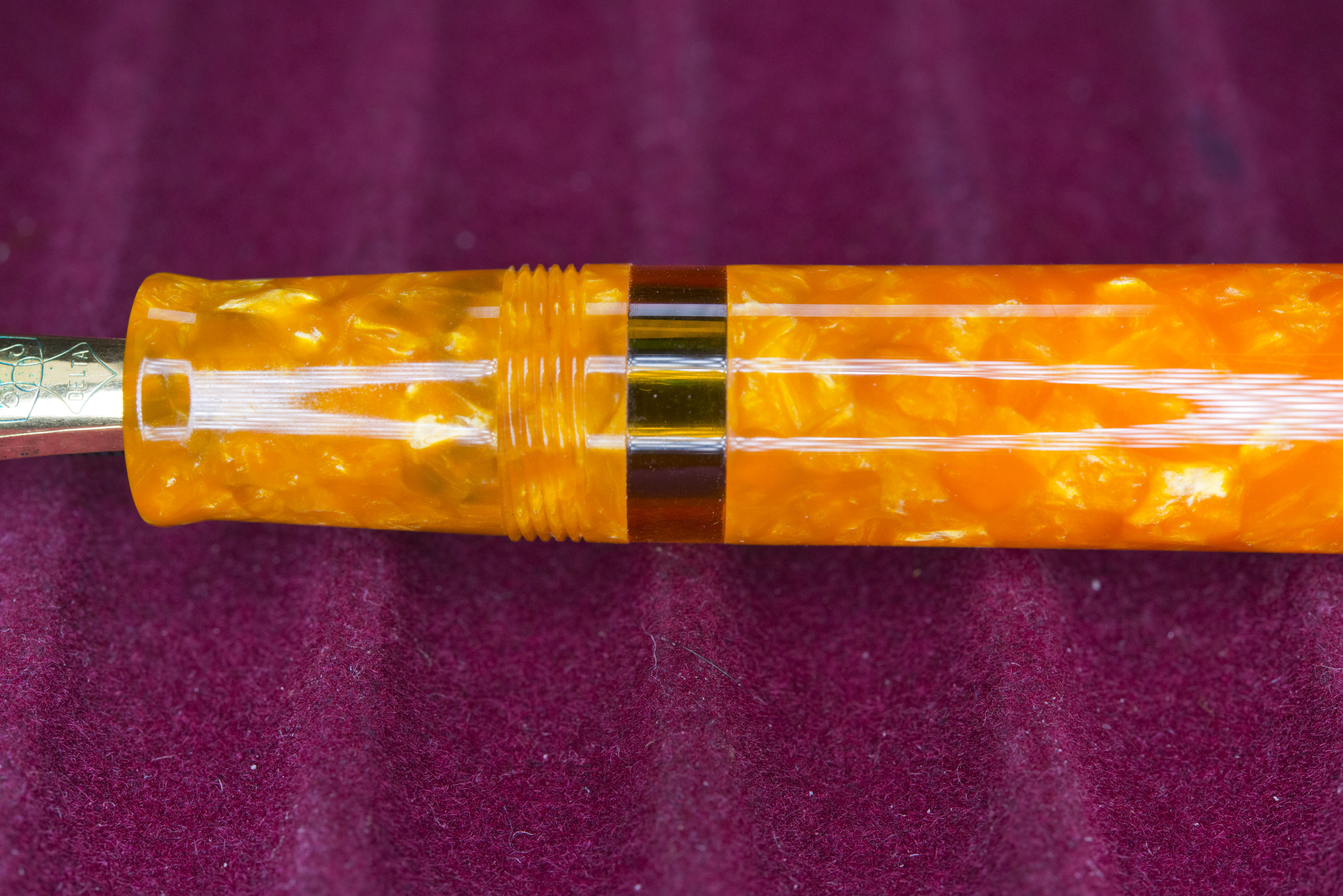 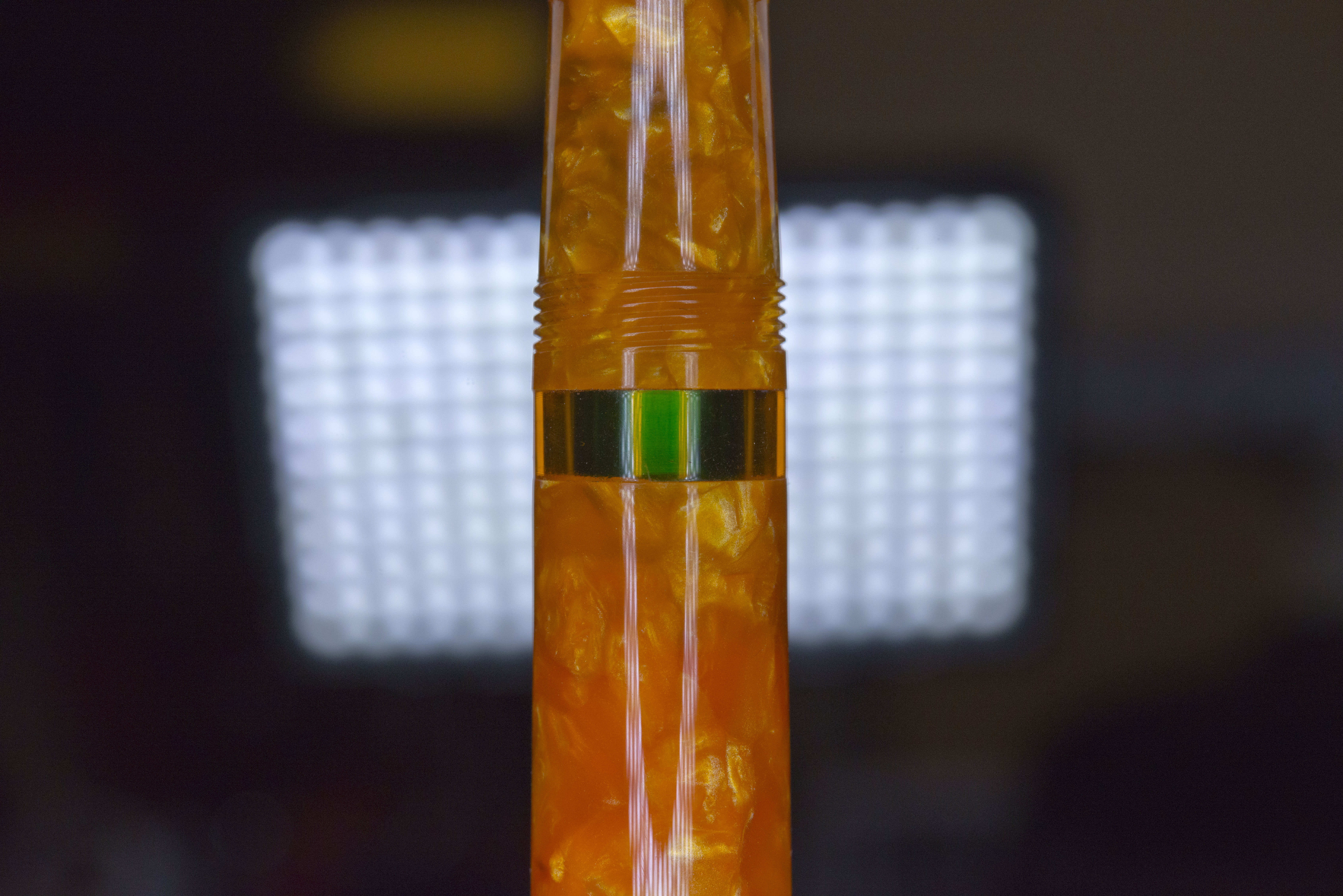 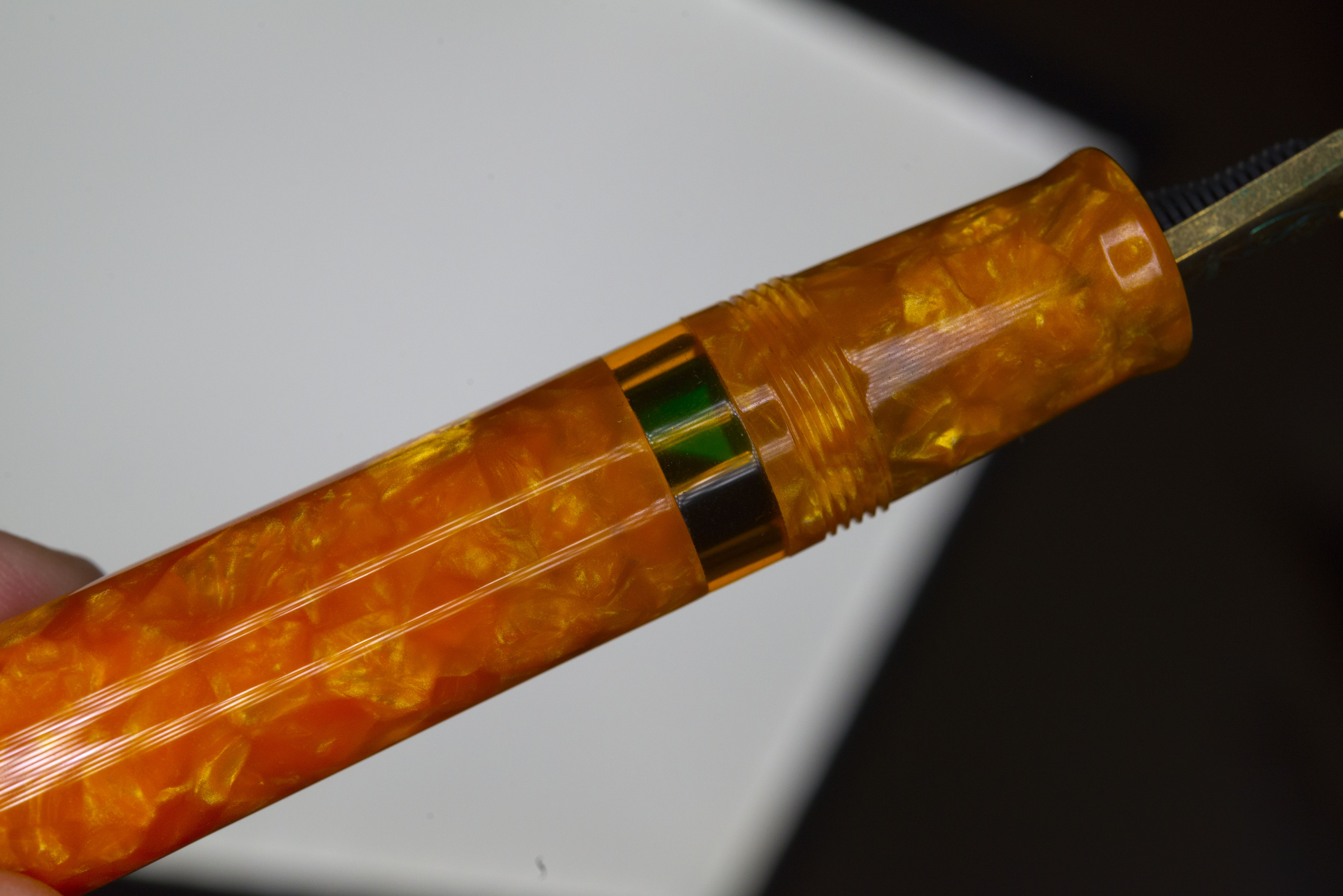 What can I say about the partially translucent orange crushed ice resin Delta have used?  To me it is simply stunning.  It might seem heretical to say this, but I by far prefer it to the traditional black and solid orange of the original.  The vermeil bright work also suits the look, I’m actually not sure the plain silver (or rhodium plated) option would work anywhere nearly as well.  Finally you have the orange ink window, which is half visible when the cap is on.  The overall visual balance is something only the Italians can manage.  Sure a Montblanc, Pelikan, or GvFC pen in this price range may in theory be a better made pen and be more reliable over time, but in comparison their Teutonic looks are boring. 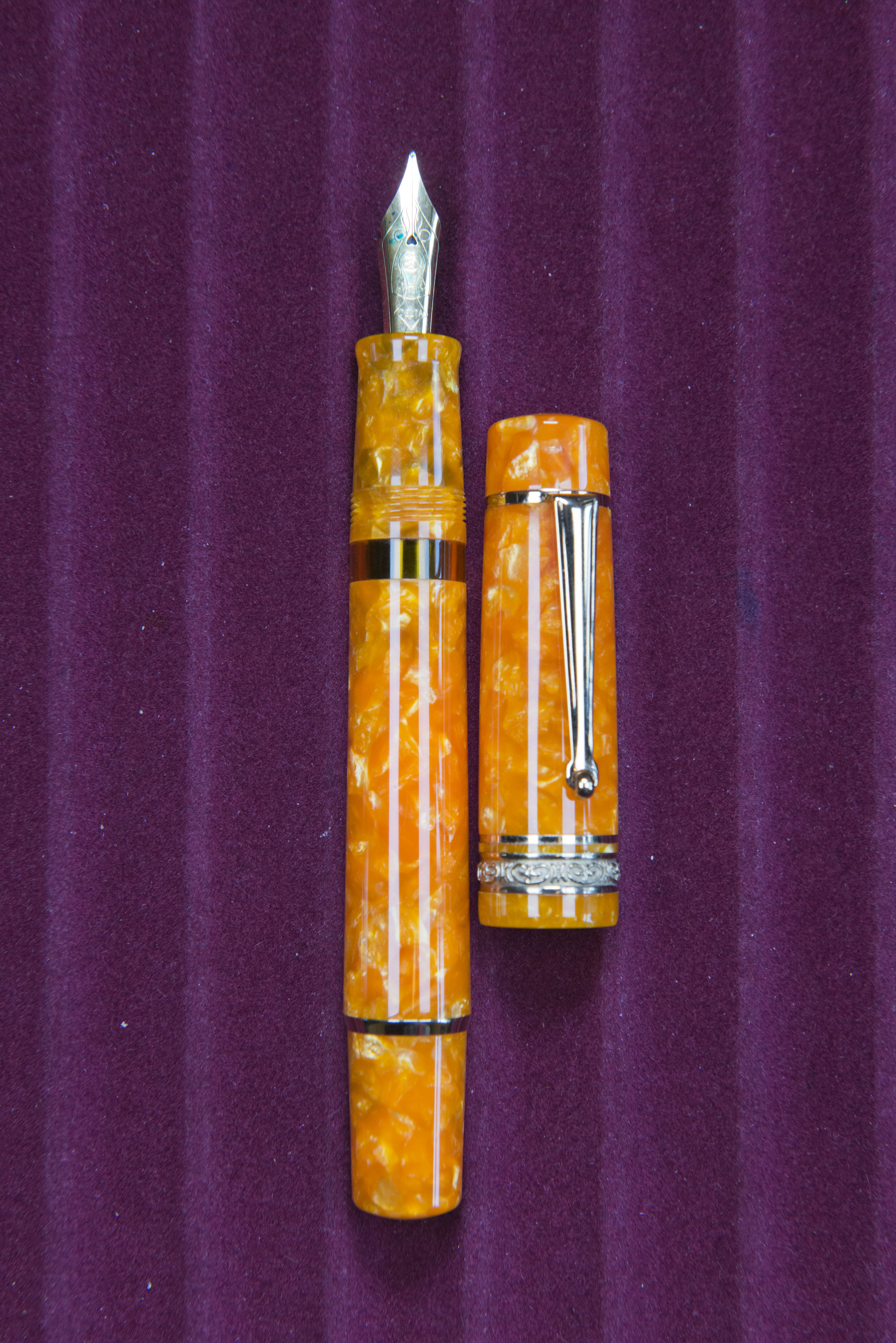 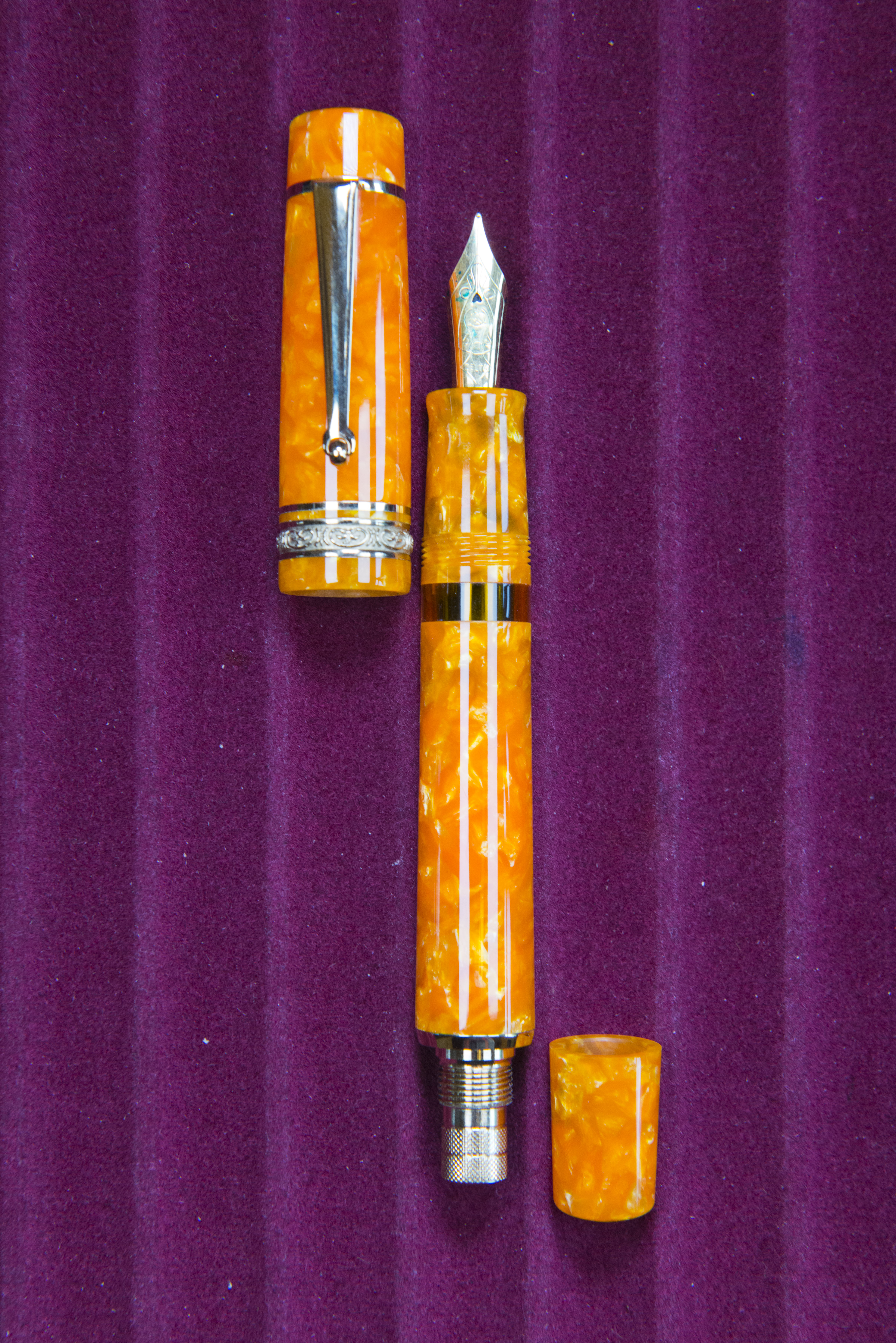 Shape wise, the Dolcevita is rather generic.  The grip is subtle, tapering in slightly towards the nib before angling gently out for a finger rest/stop.  There is not much space before you come to the threads, which are actually hard  and noticeable.  Rather disappointing on a pen at this price point.  The ink window is clear, of a decent size, though about a millimetre thinner than the parts of the pens it connects to.  You can not see this unless looking closely, and you can’t feel it unless you concentrate, but again it does remind you of Delta’s reputation for QC.  From the threads, backwards, the body does actually angle away very slightly, but you have to look hard to notice.  The ring at the back is a nice break and angles downwards.  The blind cap is thinner than the body and angles in towards the subtly peaked end, however this does work visually. 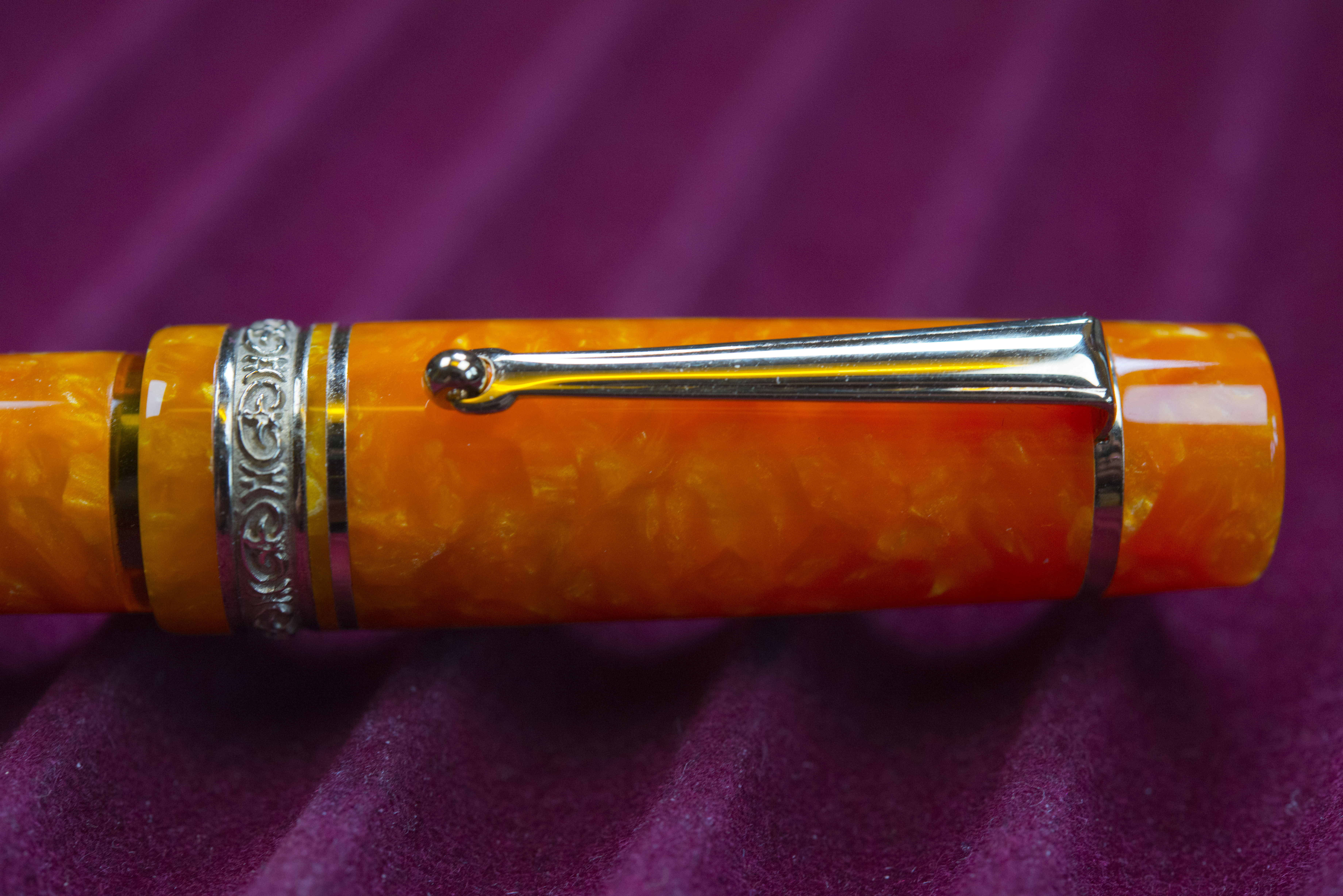 The cap is more interesting as it has one band near the top, which is part of the traditional Delta wheeled clip.  Towards the opening you then have two more rings.  the first is thin and plain, like the one attached to the clip, the other is wide, with the central section moulded/engraved.  If through a loupe you can see the familiar lines of laser engraving, then your metal work alas is not silver/vermeil, but rather rhodium plated.  There is something rather classical looking about the cap, again differentiating it (and other Italian makes) from the German rivals.  The finial contains a small disk in the centre with the Delta logo on it. 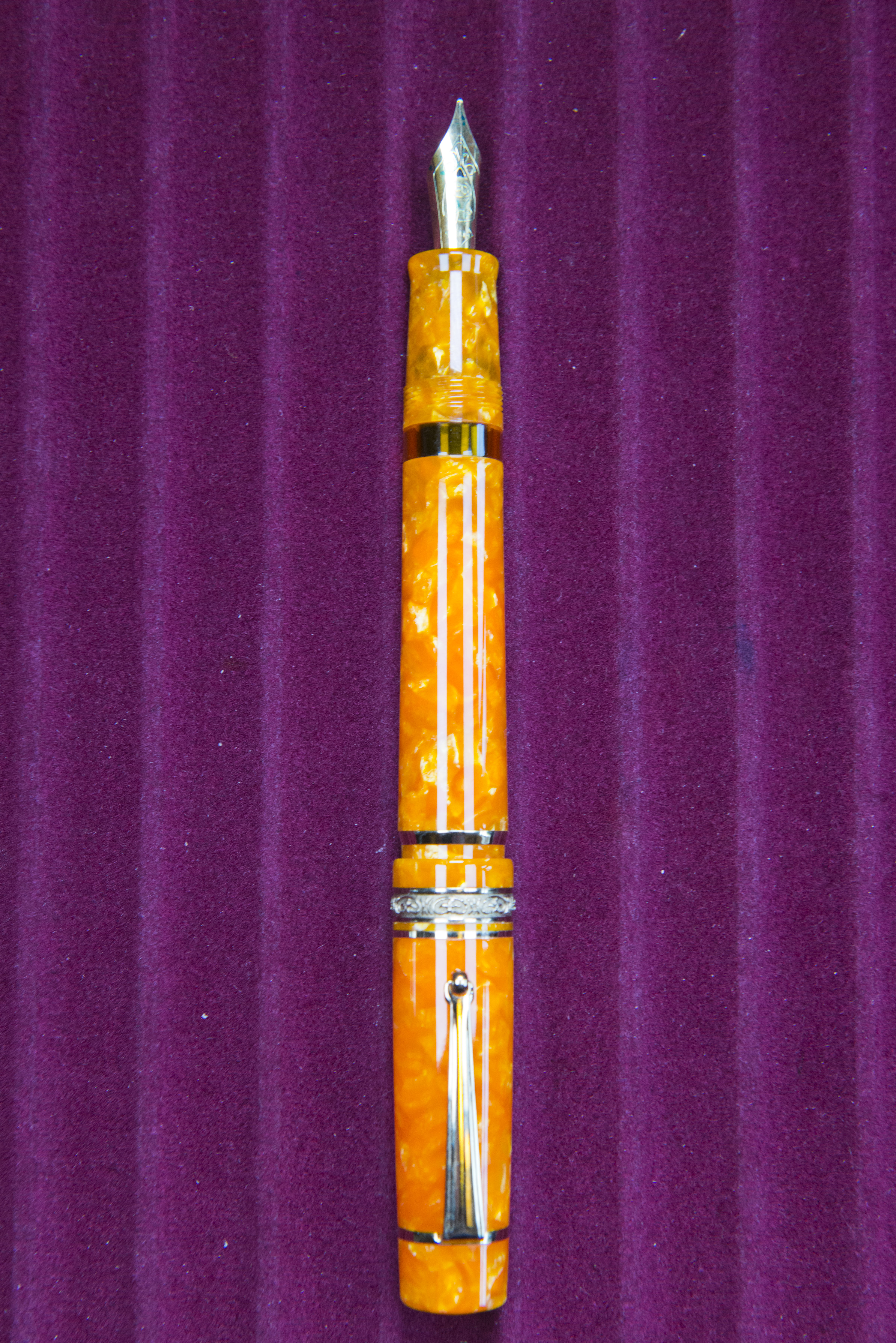 The cap does post securely, making the pen some what long.  The balance point, for me, actually moves to the crook of the hand, just where the barrel rests against my skin, so it actually does not feel particularly back weighted, though I also prefer the weight to be more towards the nib. 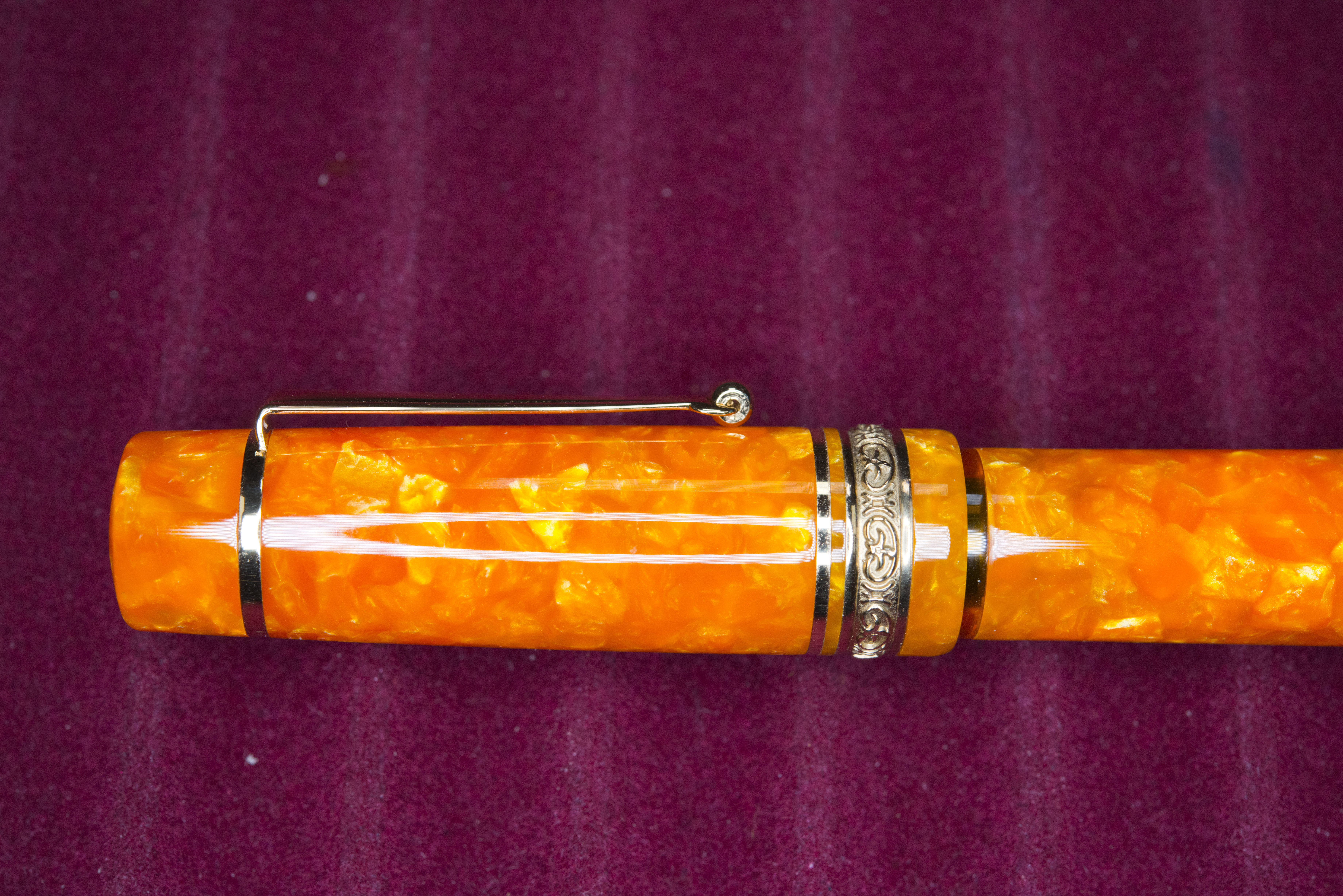 The clip works well.  It has a nice level of spring and the wheel lets it slide over a pocket seem with ease when under slight pressure, but is tight enough that the pen will stay in place. 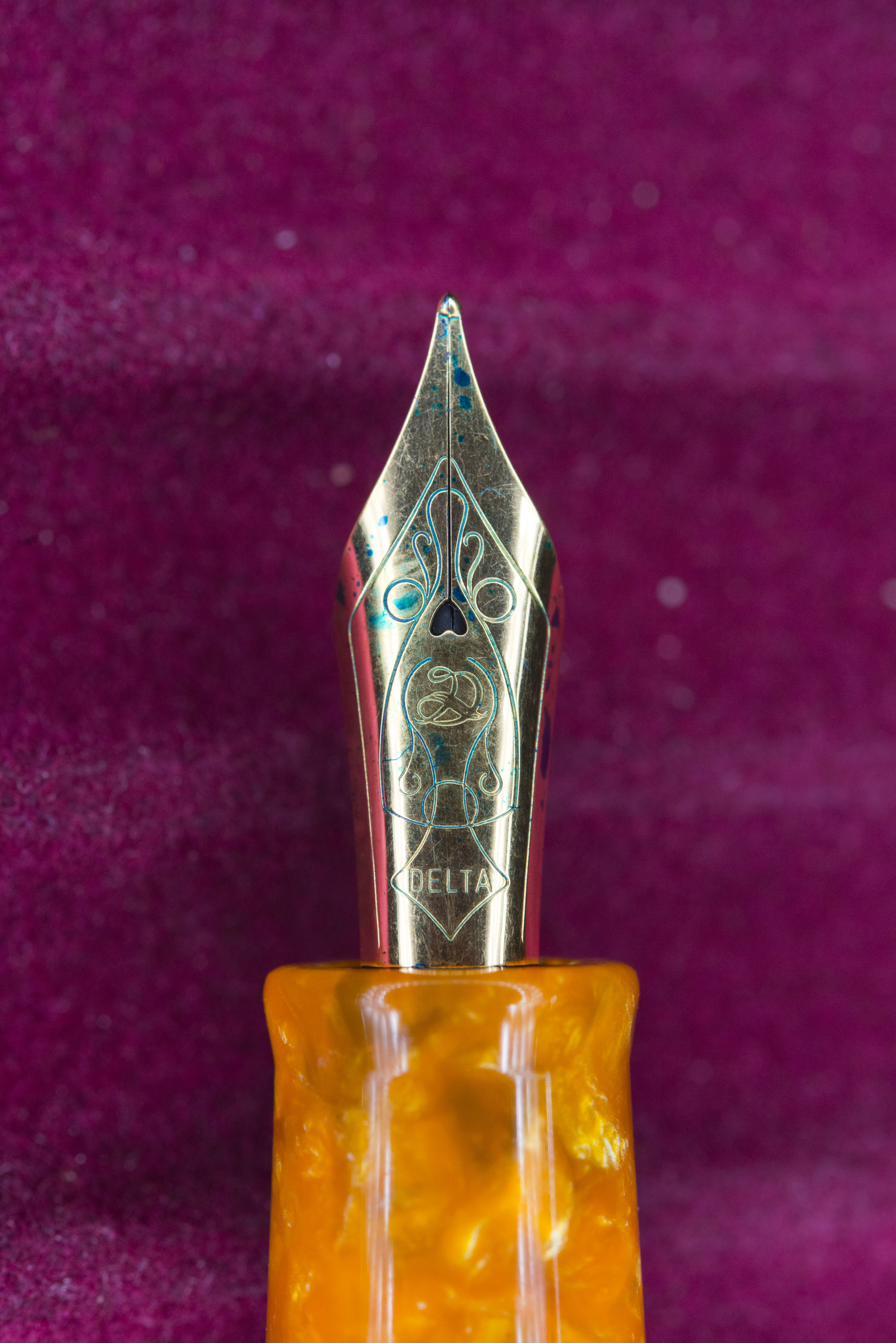 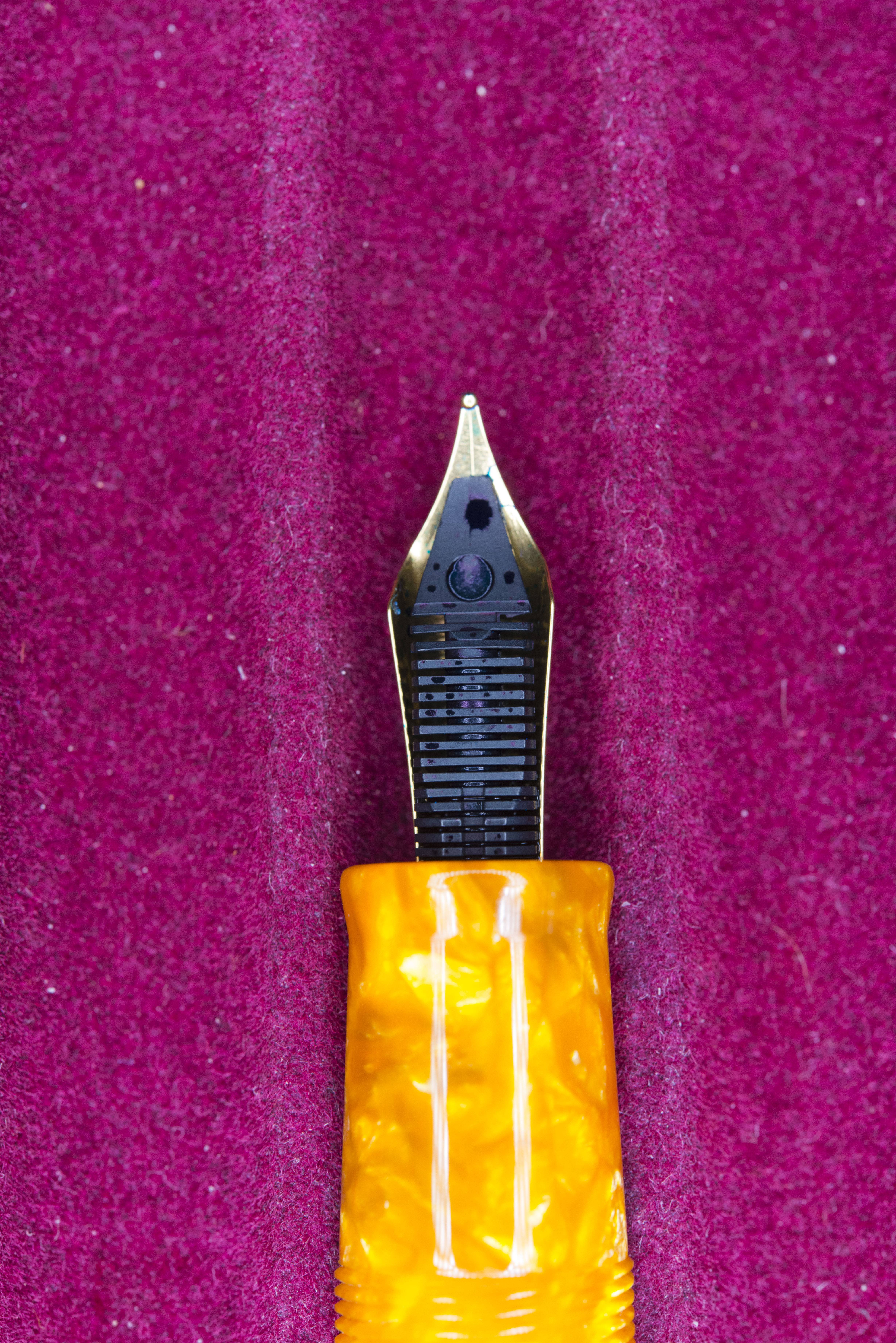 Delta nibs can be a mixed bag.  Looking at  forums and you’ll see too many complaints about pens not writing out of the box.  There is also something about the fusion nib that just does not look right, so another reason to avoid it.  Visually this steel nib only really differs from the gold alternative by the lack of the gold purity level where the Delta name sits.  The rest of the patterning is attractive scroll work, gold coloured in this case.  Writing wise it was a real disappointment.  It is nail like and at first was as dry as the Sahara.  This was post flushing a few times.  Carefully widening the tines (helped by the nib being a Bock screw in unit) resulted in an improvement, but even with ink flowing this still writes like a fine, rather than medium nib and is still dry.  I also switched inks, which helped, from Pilot Iroshizuku Yu-Yake (chosen for colour matching) to Lamy Turquoise (a better flowing and much safer ink).  I would contemplate getting some professional tuning done on this pen, but that is not going to help with the stiffness (I prefer springier nibs) or the comfort factor.  It has crossed my mind to look out for an appropriate gold nib to swap in.  Maybe I’ll take this route at some point if not too expensive.

After my last comment I need to come on to how the pen feels in the hand.  This is very subjective and different to each person.  I would suggest if you find a Pelikan M800 comfortable to hold, then you’ll be fine with this pen.  I, however, do not.  I find myself using the pen because it is there and it looks attractive, making me want to give it another chance, and not for the pleasure of the writing experience.  I suspect this will be included on my next for sale list, though the heart may also keep it off there.  The fact I also feel the threads and over time this does not fully fade away, does not help. 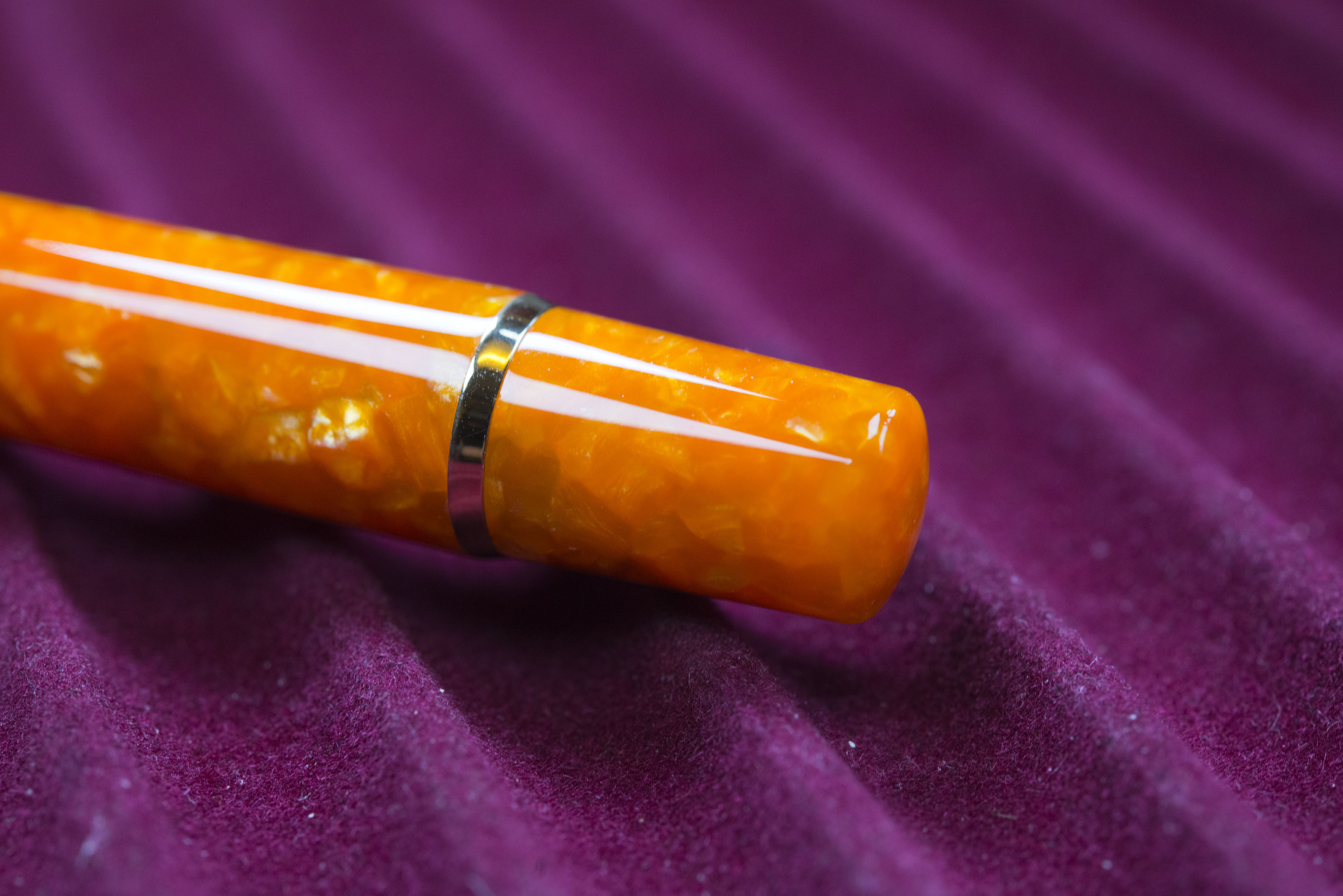 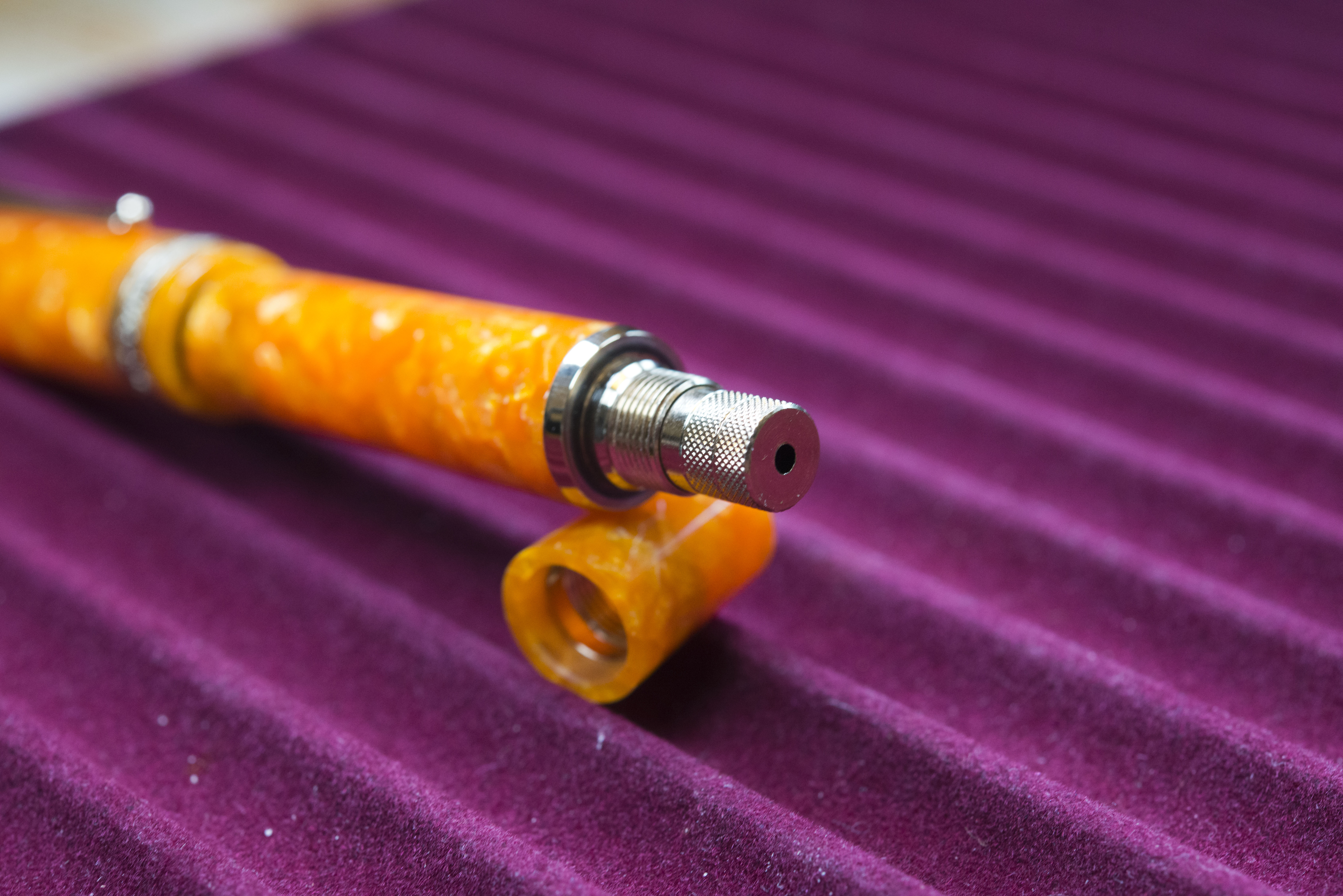 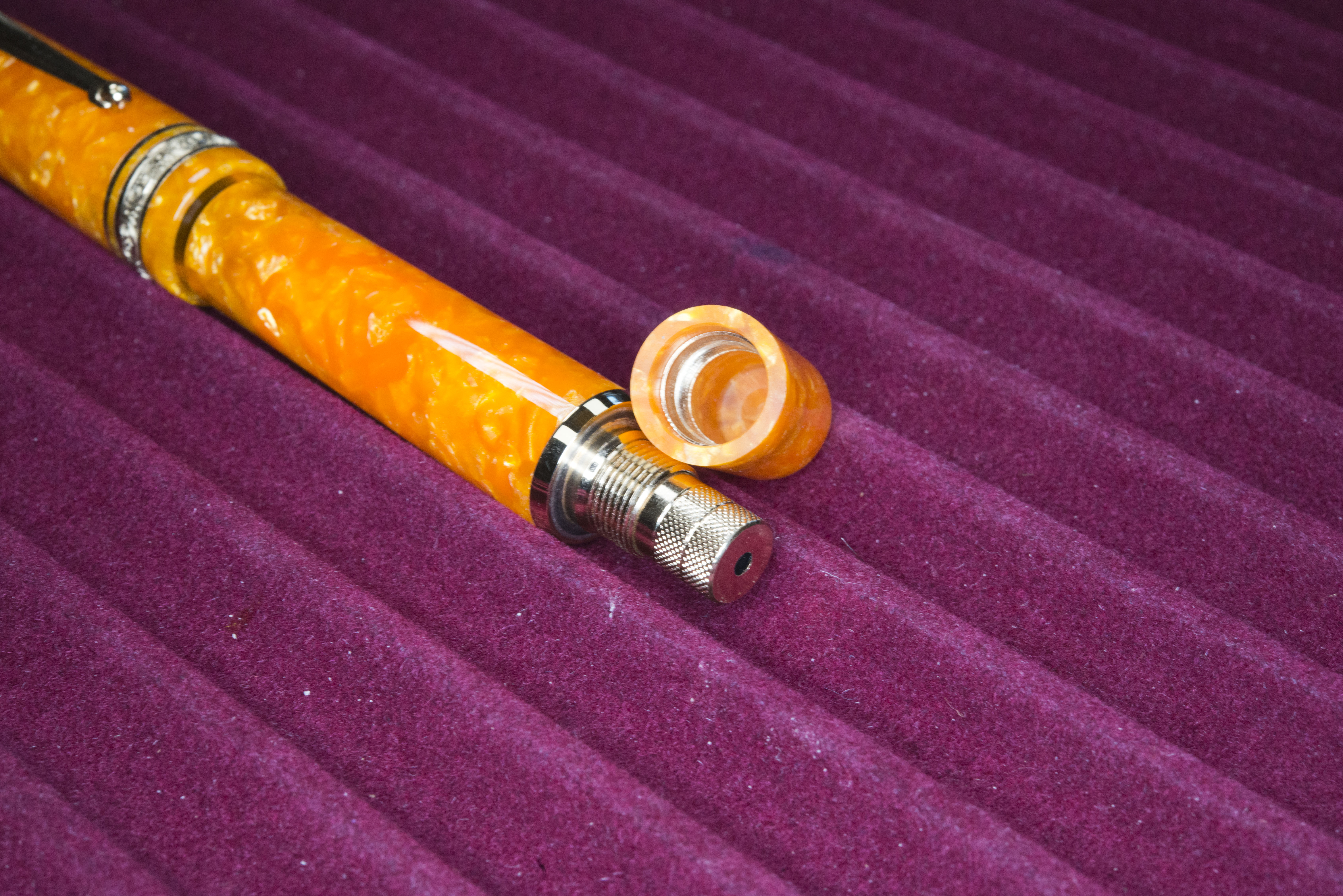 The Delta piston system is very well implemented.  The action is smooth and there’s no fear of over winding the plunger back in as the mechanism is ratcheted and looks to be made of brass.  It works very well and I appear to get a decent fill first time round.  Some may find the need to remove the blind cap a bit of a chore, but I’m not so bothered about this.  The threads within the blind cap are part of an inserted piece of brass so there should be no worry about the resin wearing away and the cap coming lose.

Value wise it is hard to judge this pen.  It is not made any more and before Delta got in to financial trouble you were looking around £700 for the piston/Stantuffo version with the gold nib, about a hundred quid less with the fusion alternative.  By the time Delta went under the price for this pen had dropped.  Considerably.  Excess stock was being sold off for around the £250-£300 mark.  Prices now, however, are rising.  How high, probably not to original cost level, after all Delta did not have the same name cache as OMAS and most certainly did not have their range of celluloids.  I possibly paid on the high side considering this particular pen has a steel nib (which I would consider equal or superior to the fusion one).  If it had a gold nib then the price I paid would have been good.  This is also taking in to account it was effectively NOS so not even dip tested.

In conclusion I’m split on this one.  I love the looks of the pen, but the nib feel and tactile experience are not to my personal tastes.  Additionally the nib is dry and possibly still needs working on. 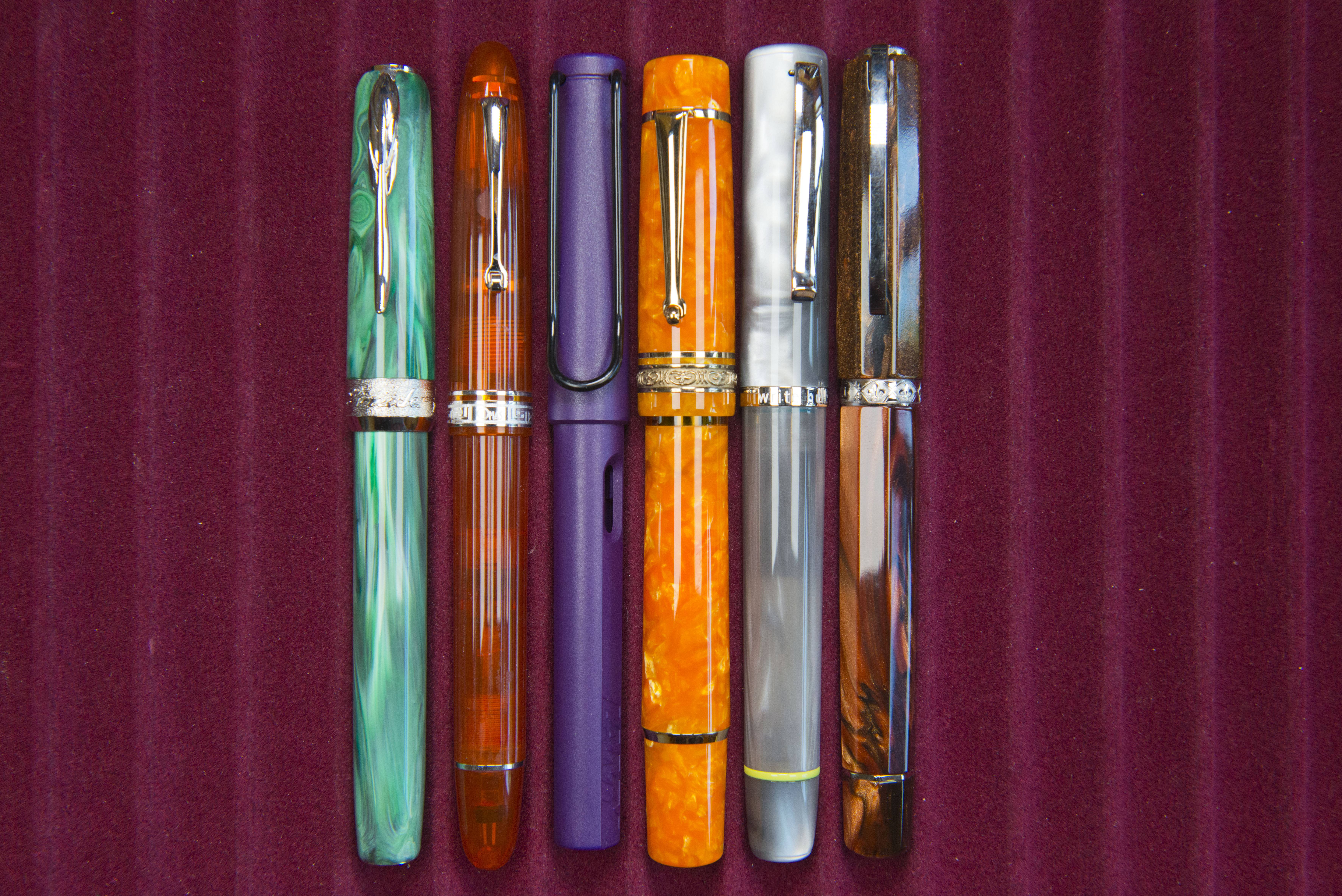 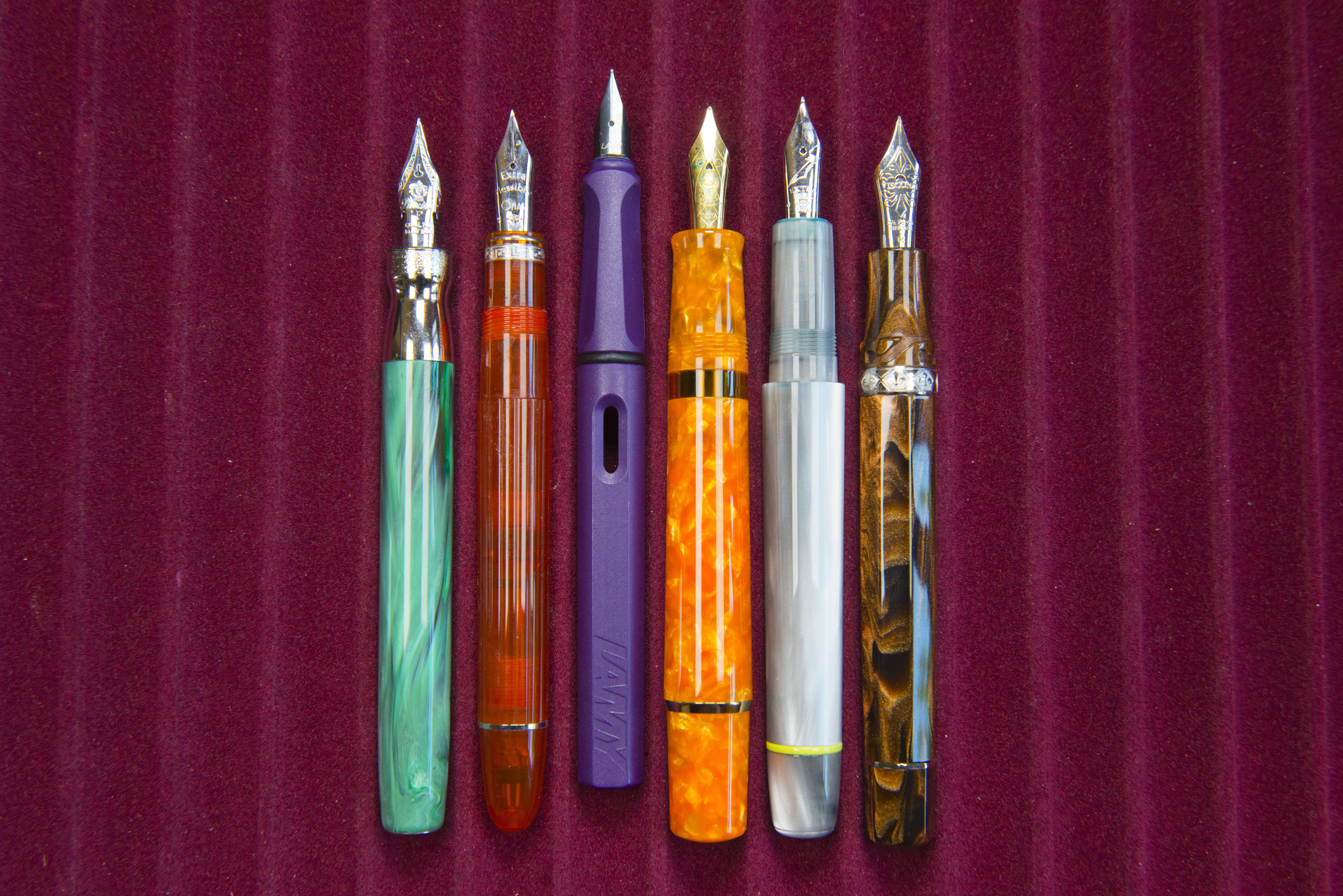 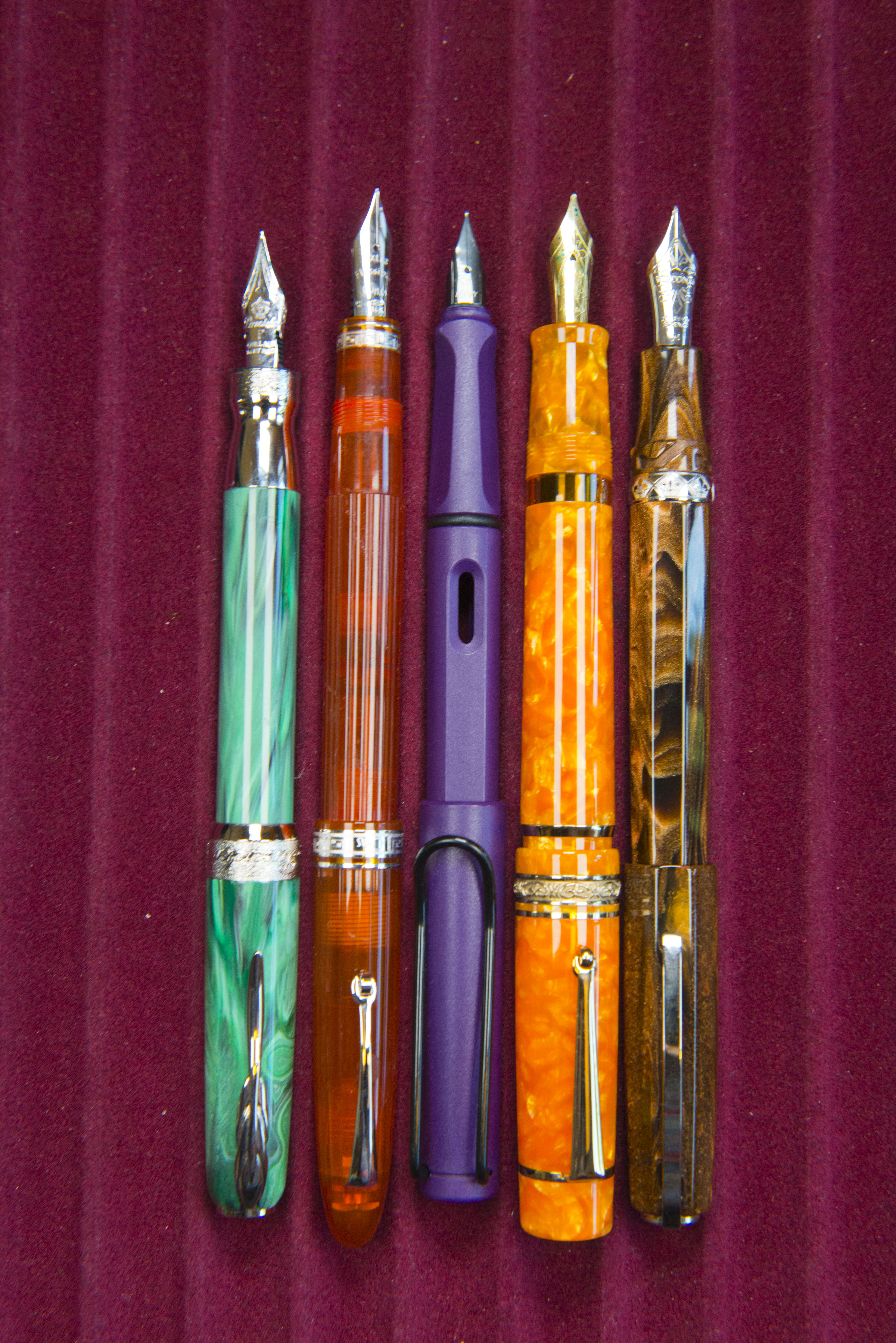 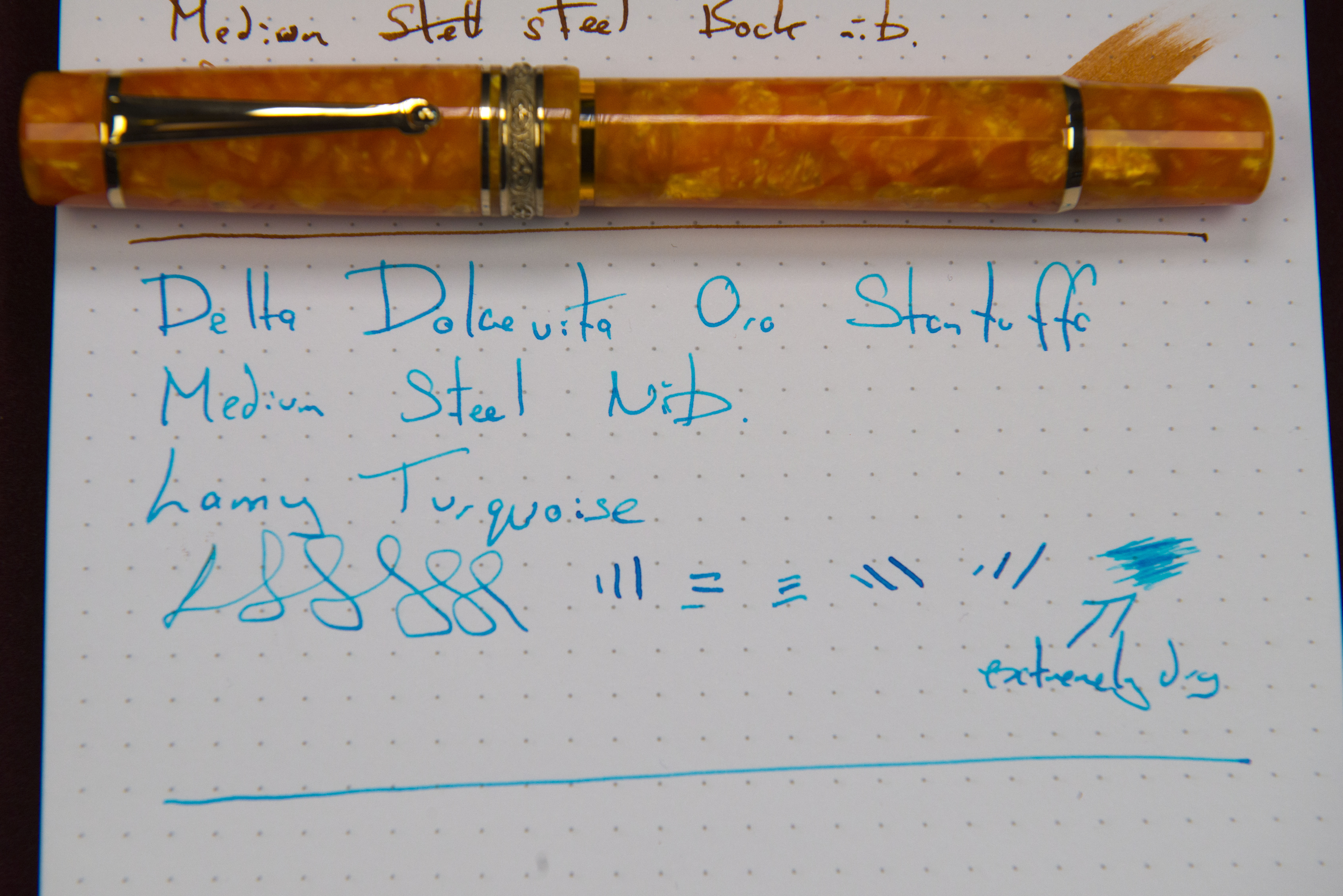