Pen shows are a great way to catch up with people you may only know from Internet forums, catch up with old friends, traders you do business with, having an enjoyable time, oh and also maybe buy a pen or two or ten.  This year there was also a big announcement.

As before, the show was being held at the Bloomsbury Holiday Inn, starting at 09:00 for early bird ticket holders (think £15 per person) and WES members, and 10:00 for everyone else (£5 per person).  To be honest, unless you’re in a rush as you need to be else where by lunch time, or you are determined to find a specific one off or bargain pen, then early admission is not really worth it even though still cheap, especially as some vendors will still be setting up.

Again, if you’ve been to a previous London show then you’ll instantly feel at home and like you know where to wander.  The organisers have (for a while any way) kept the table plan and the layout very similar from show to show.  So entering the hotel and heading past the hotel reception and cafe, turning to the left and you see the show reception desk.  A dog leg right and you’re through the doors in to the first corridor with the WES stand along much of the right. 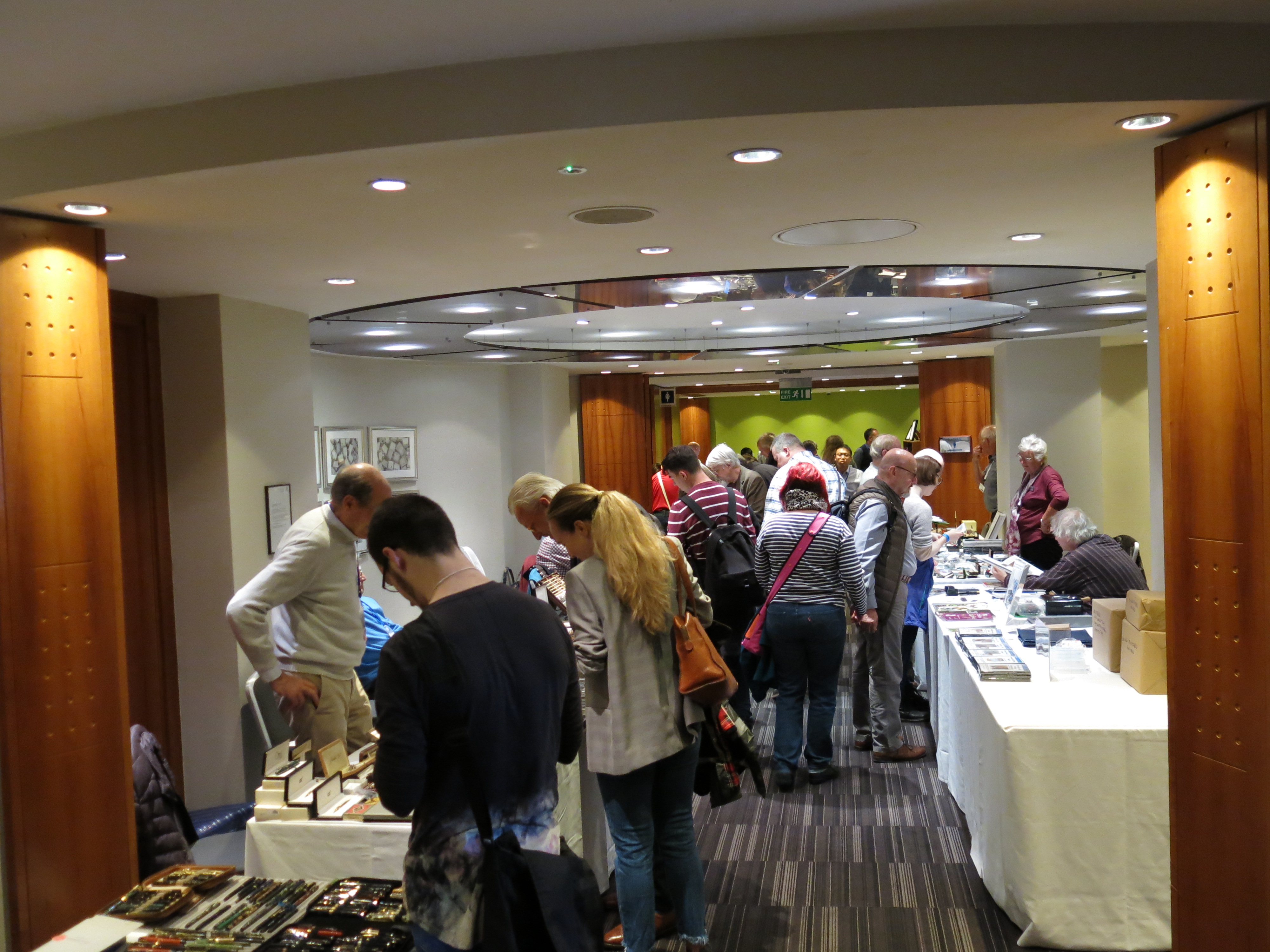 First corridor from the show reception 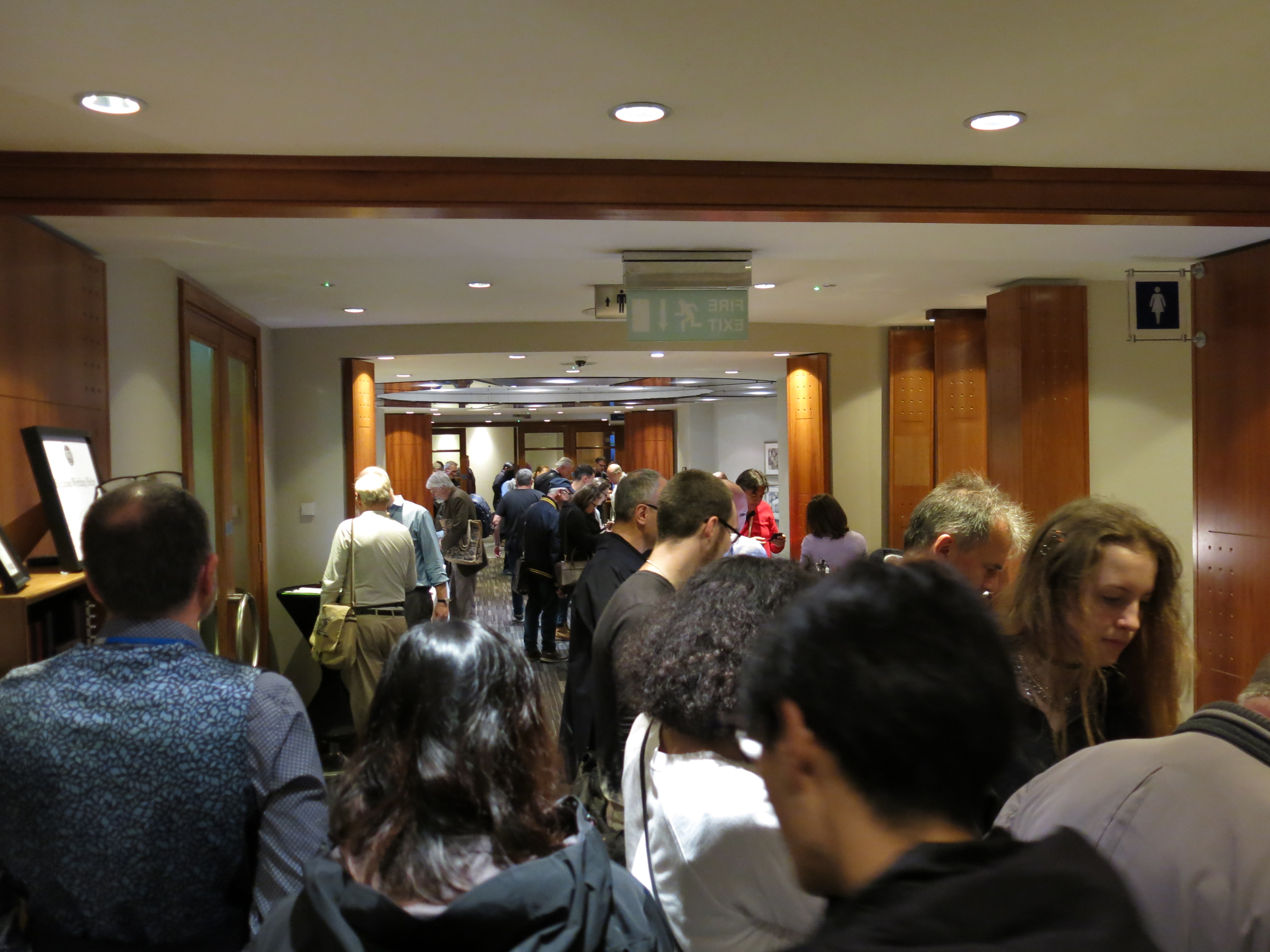 Looking back along the first corridor towards the entrance

At the far end, by a shared table between Lime Internet and Penfriend, you turn ninety degrees right for the next stretch.  While the first corridor was more for vintage pen sellers, the second was more for retailers and modern small manufacturers, starting with Jack Row, William Shakour, and Powerful Signature right by each other, Writing Desk, Worcester Pen Company, Stilograph Corsani, Onoto and Aurora UK further along, then Write Here at the far wall. 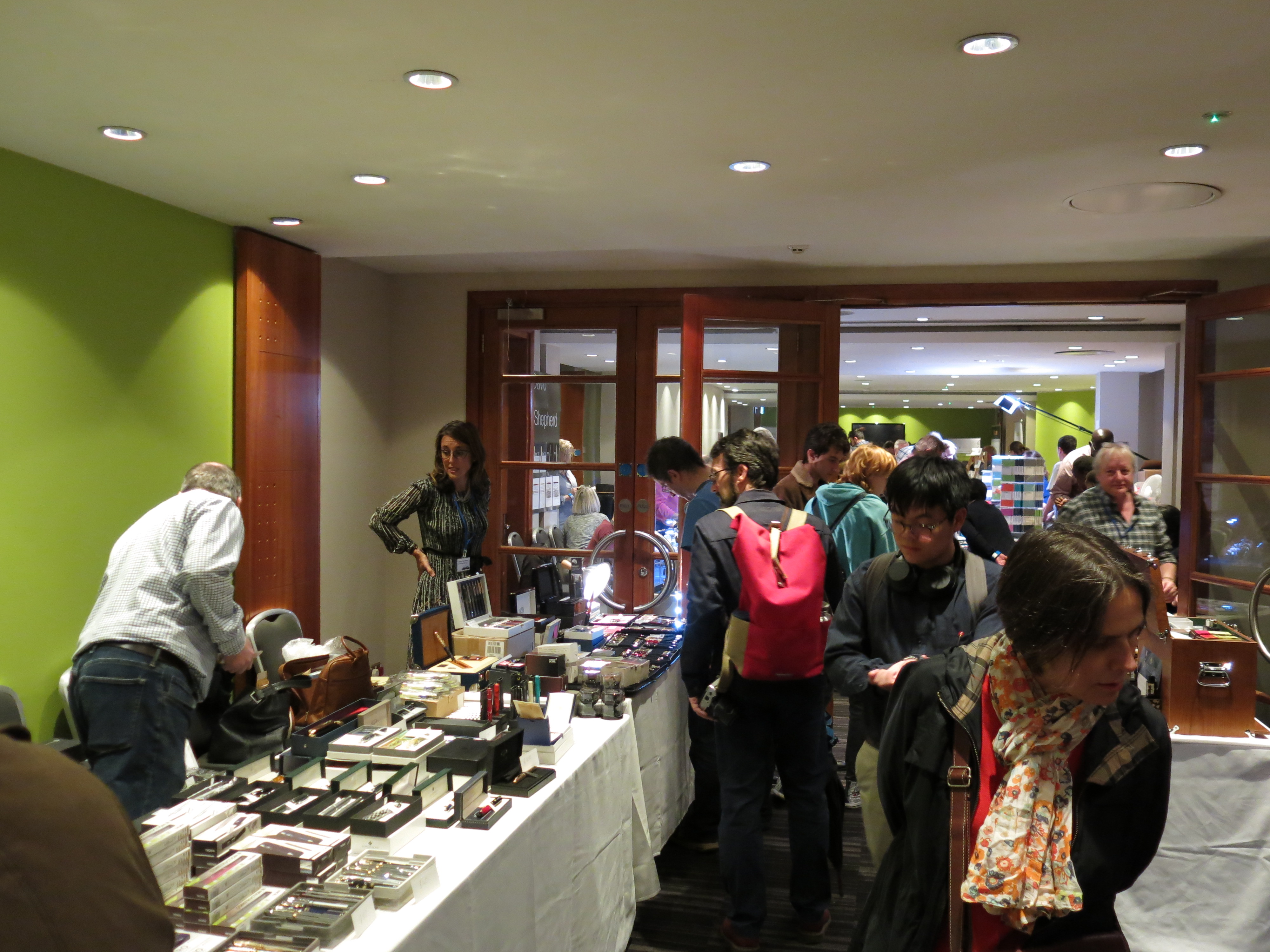 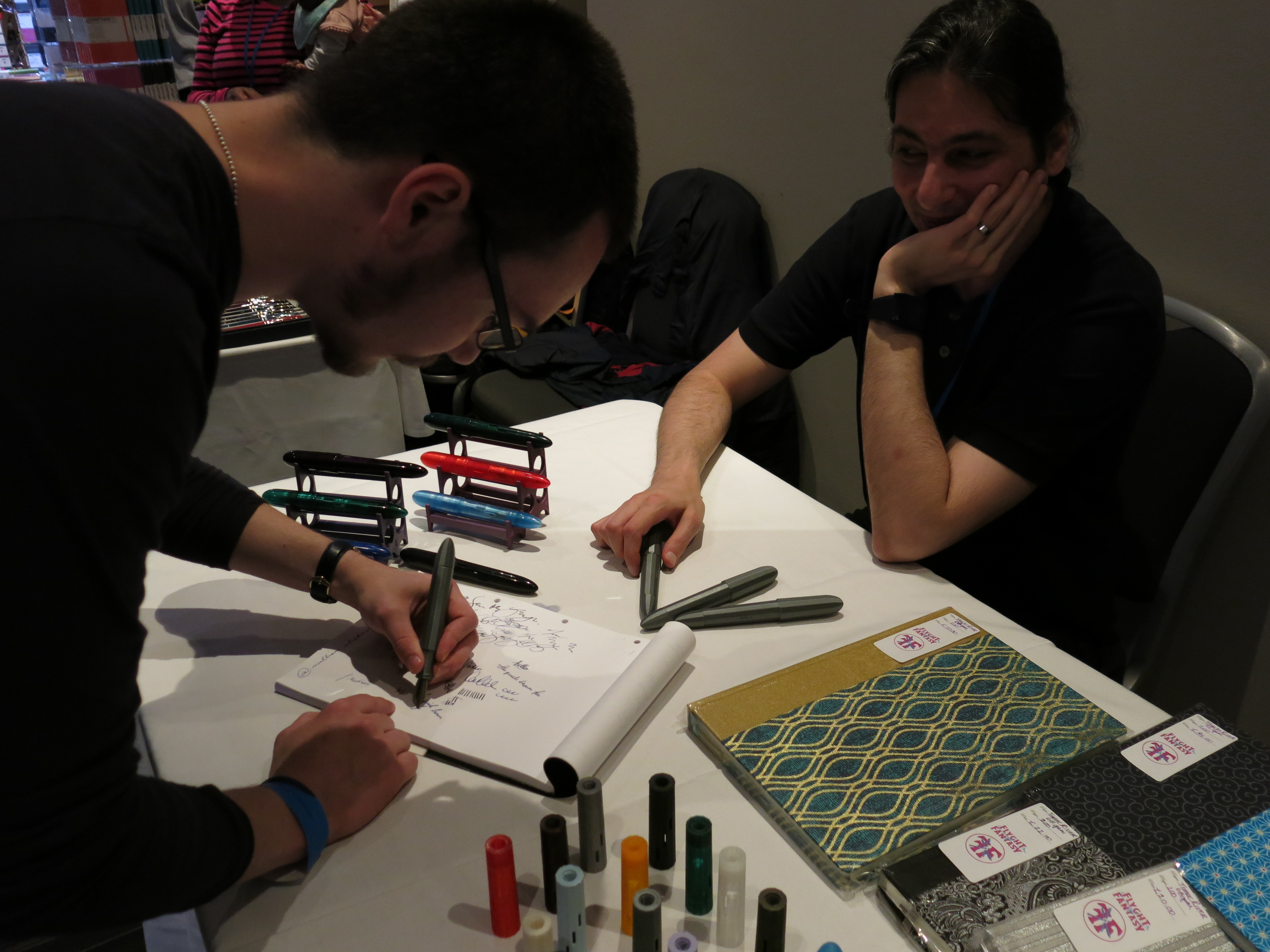 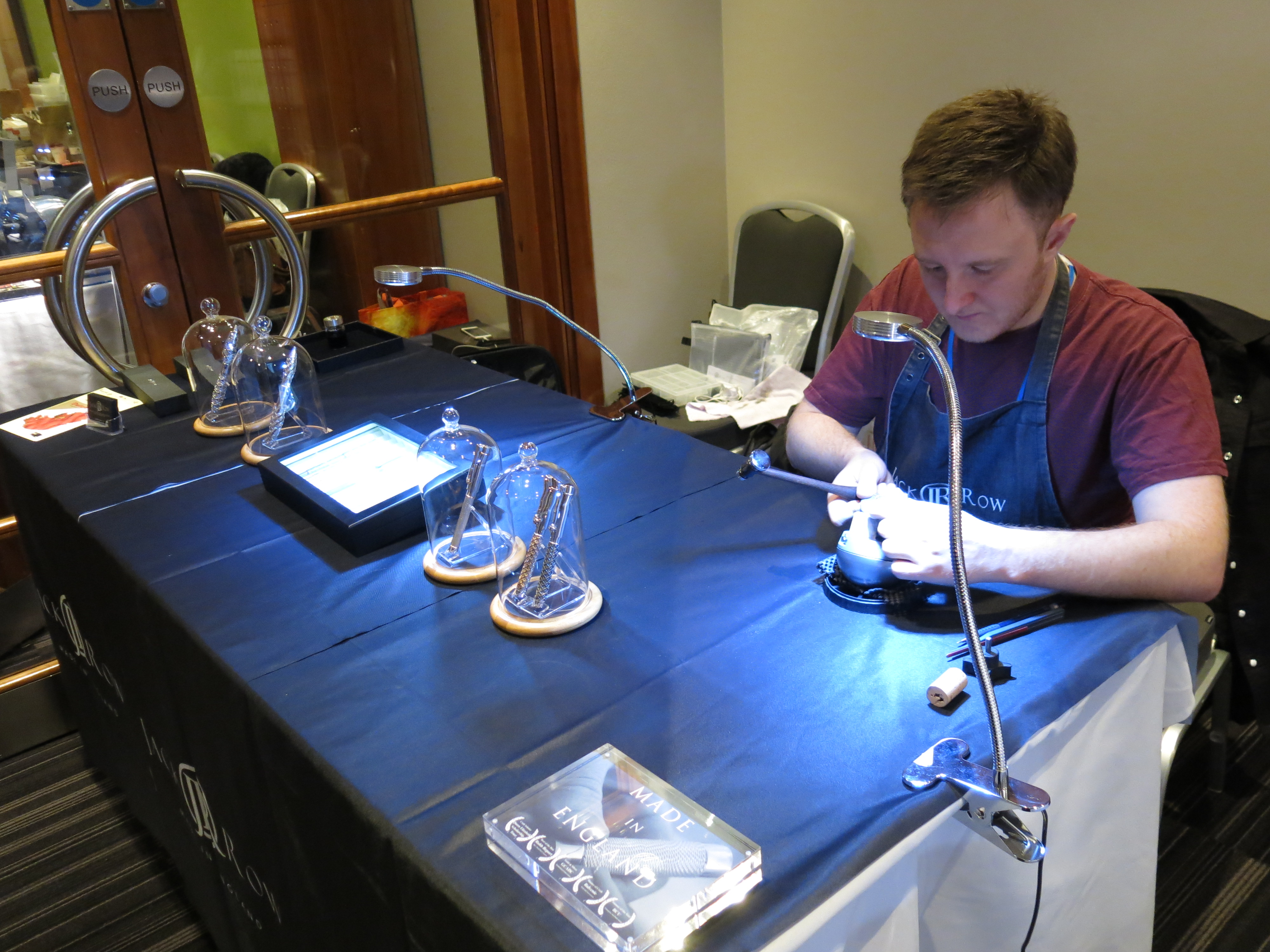 Jack Row, who was actually working on a pen during most of the show 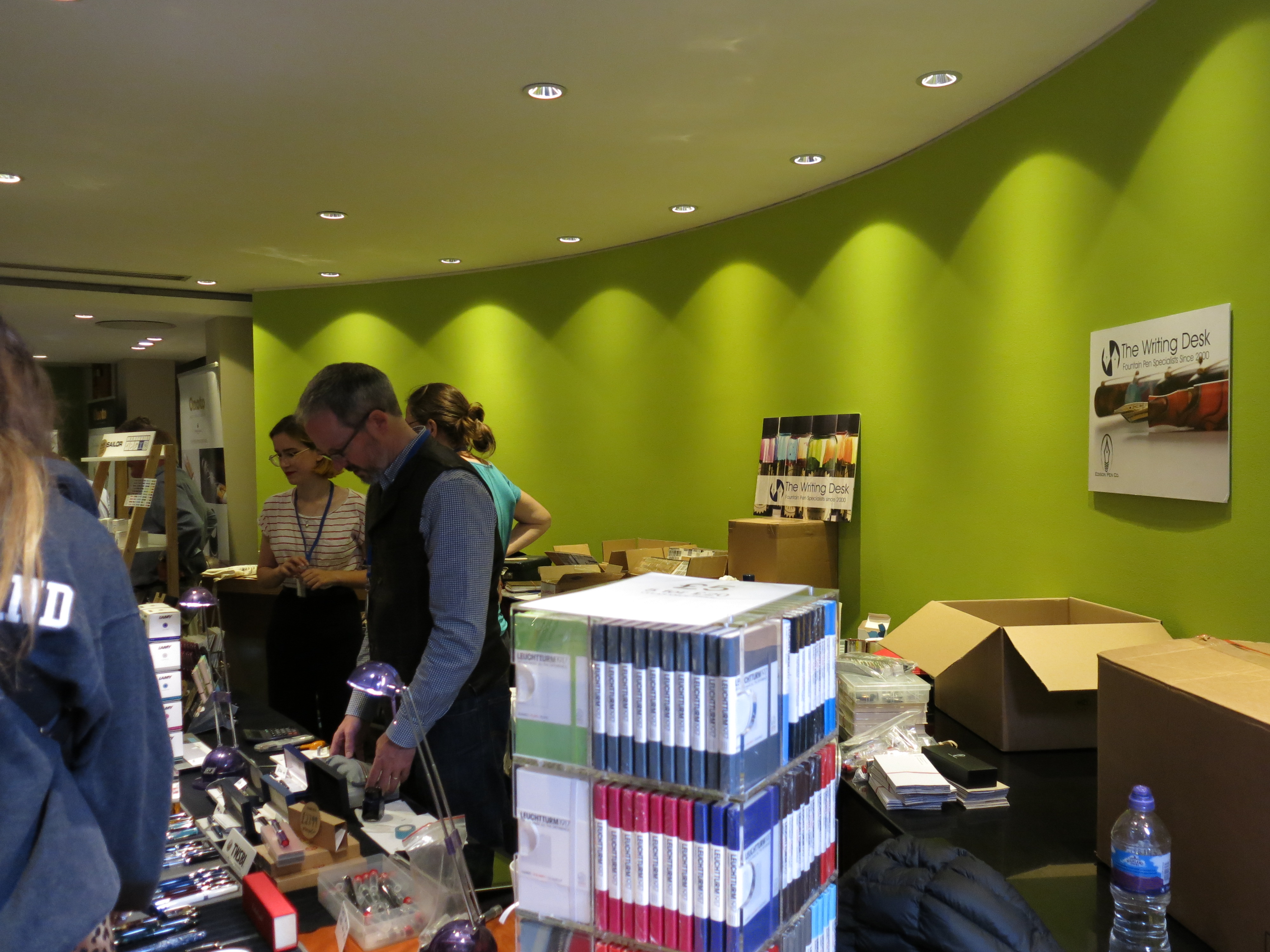 Martin from Writing Desk, Anna in the background 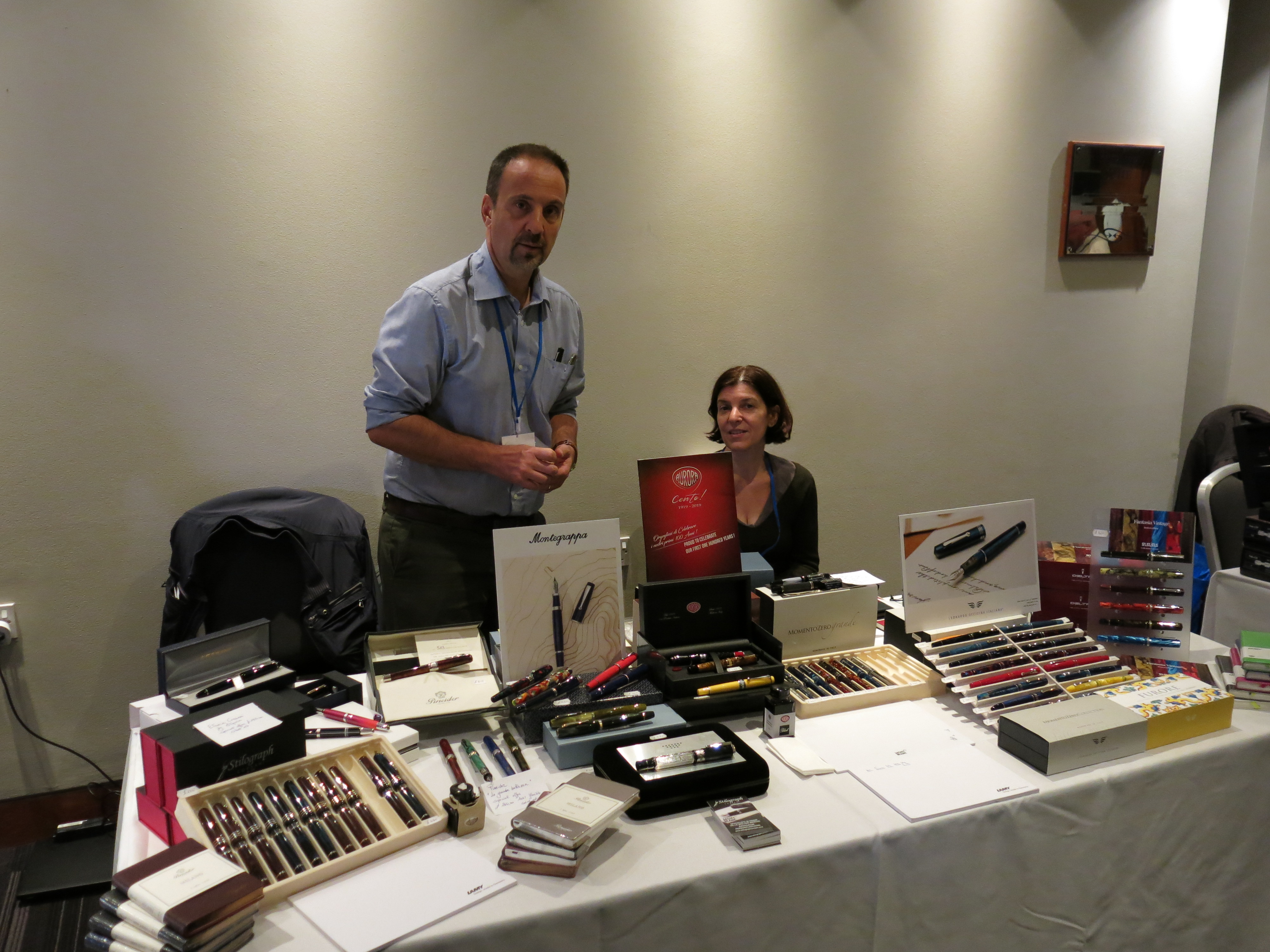 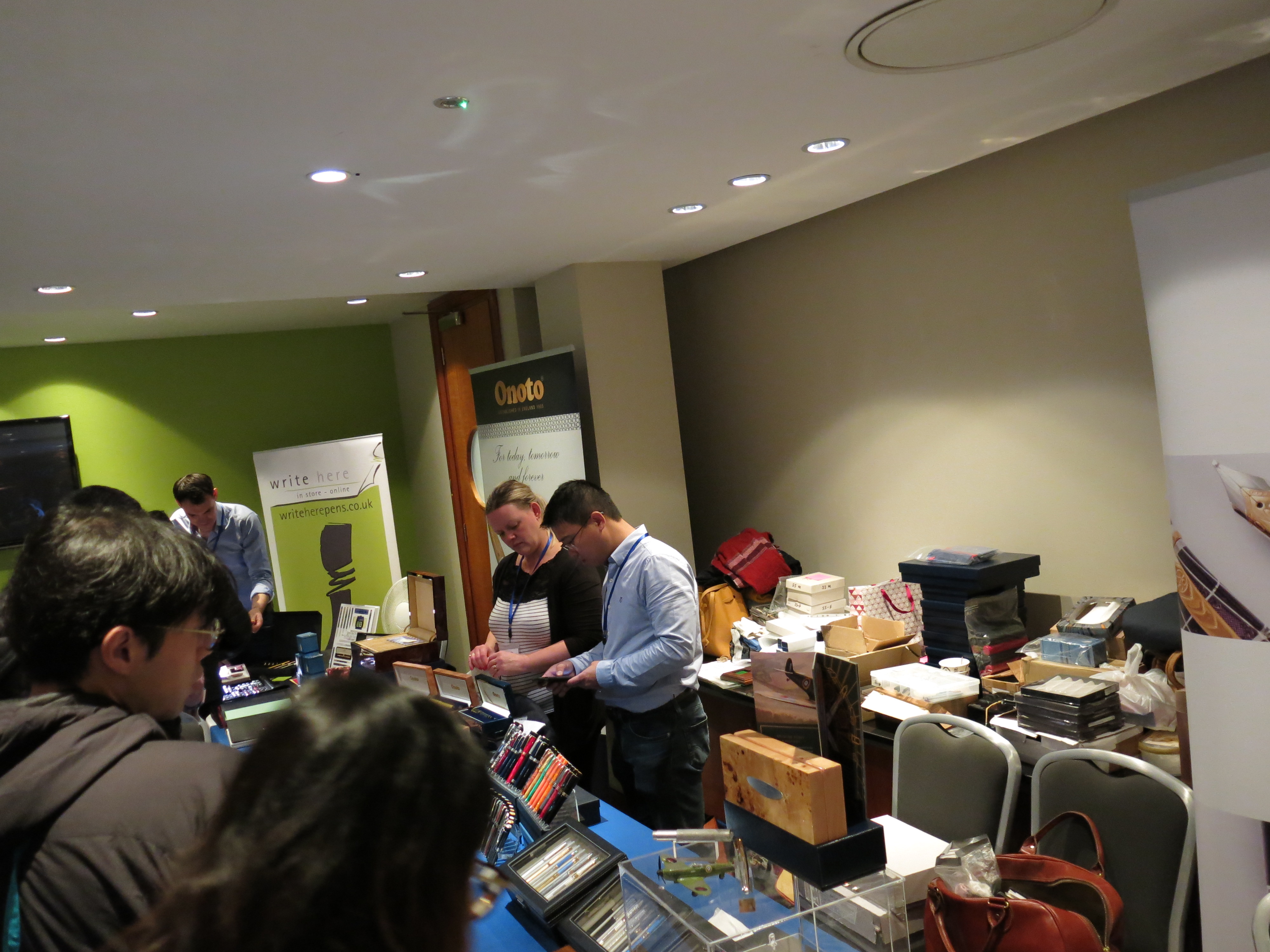 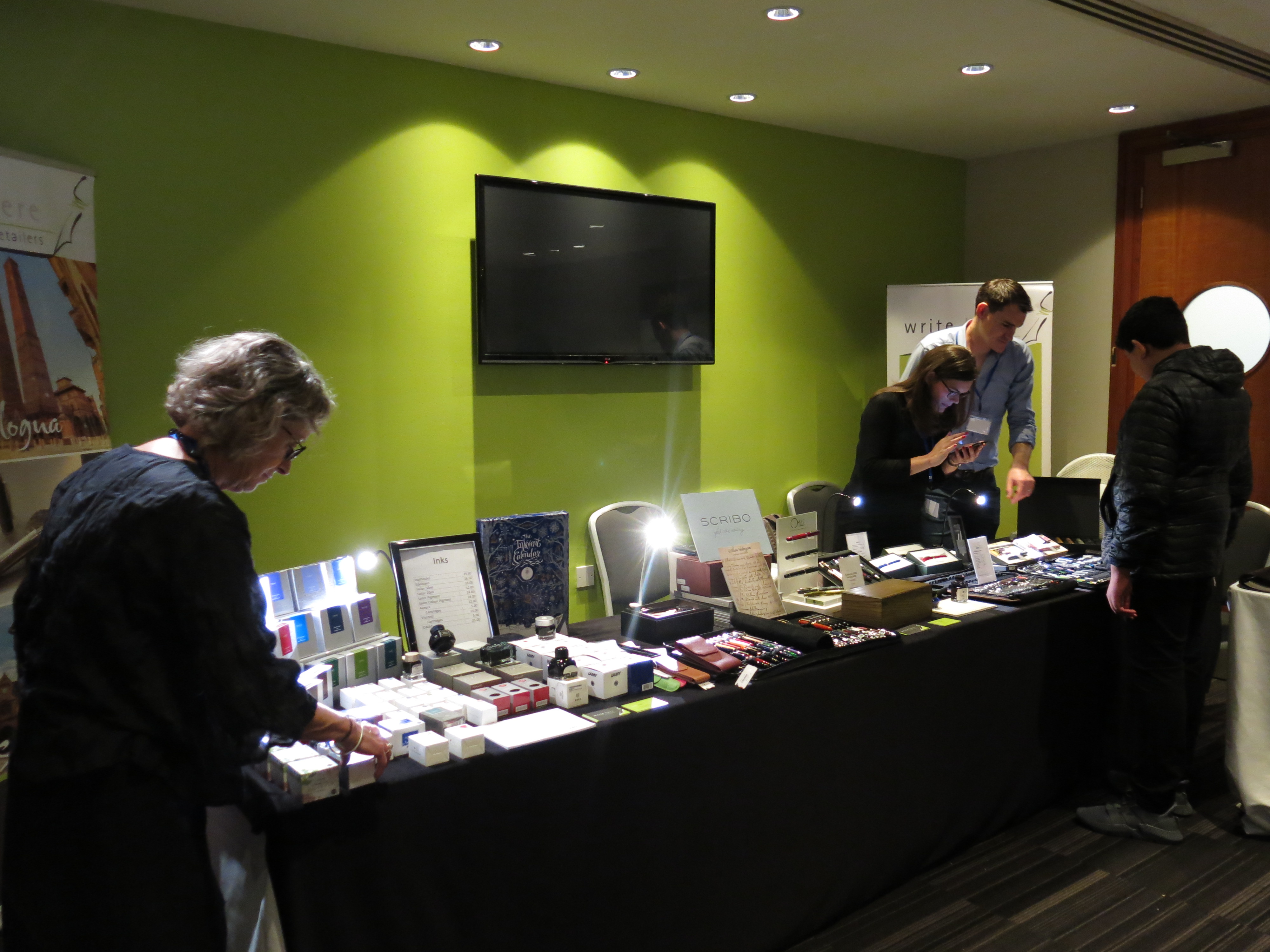 Write Here – John Hall appearing to be a ball of light … 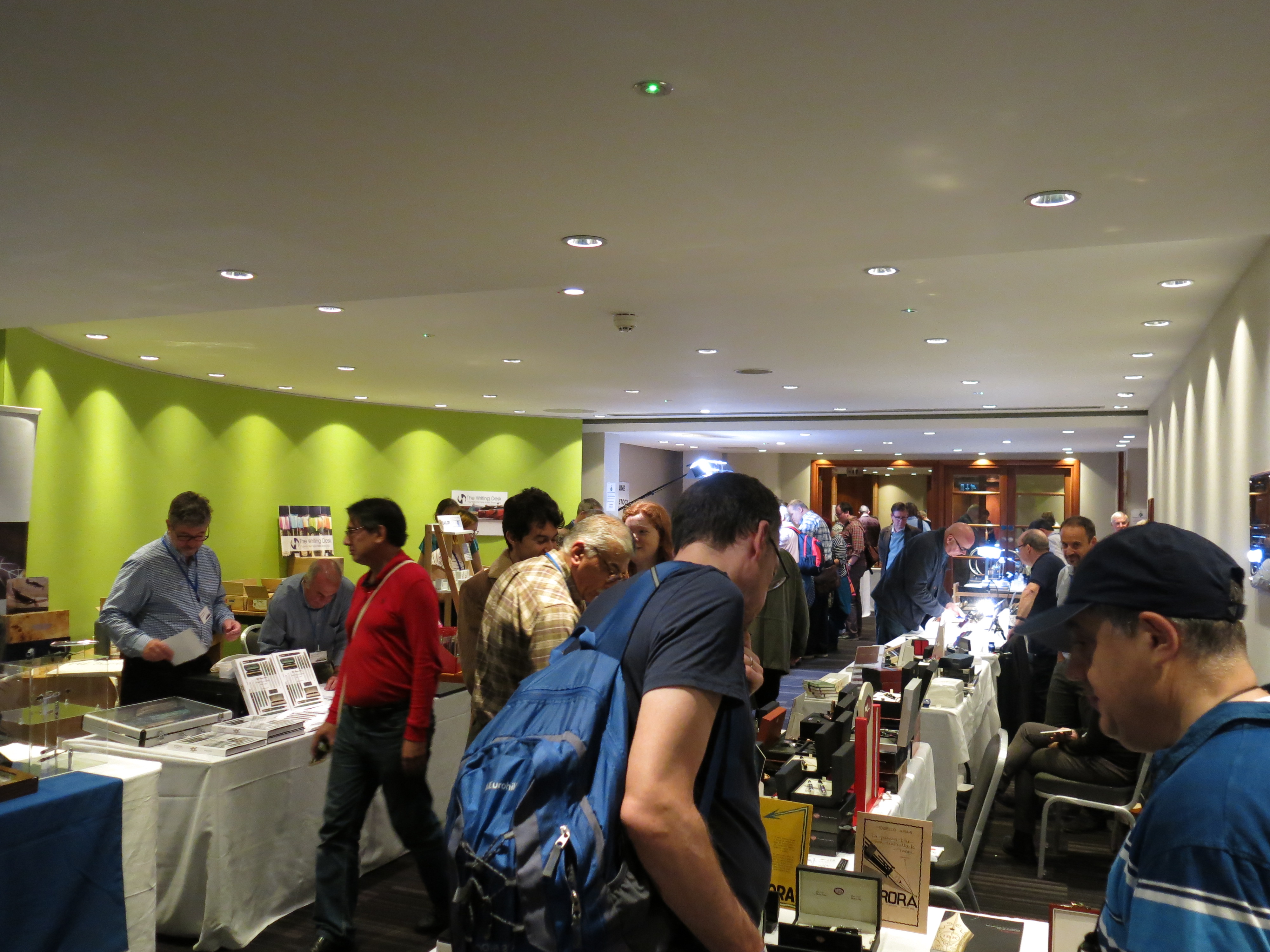 Looking back along the second corridor

I should warn I have but a few pictures of the main room, but as before it is accessed from two doorways in the second corridor. 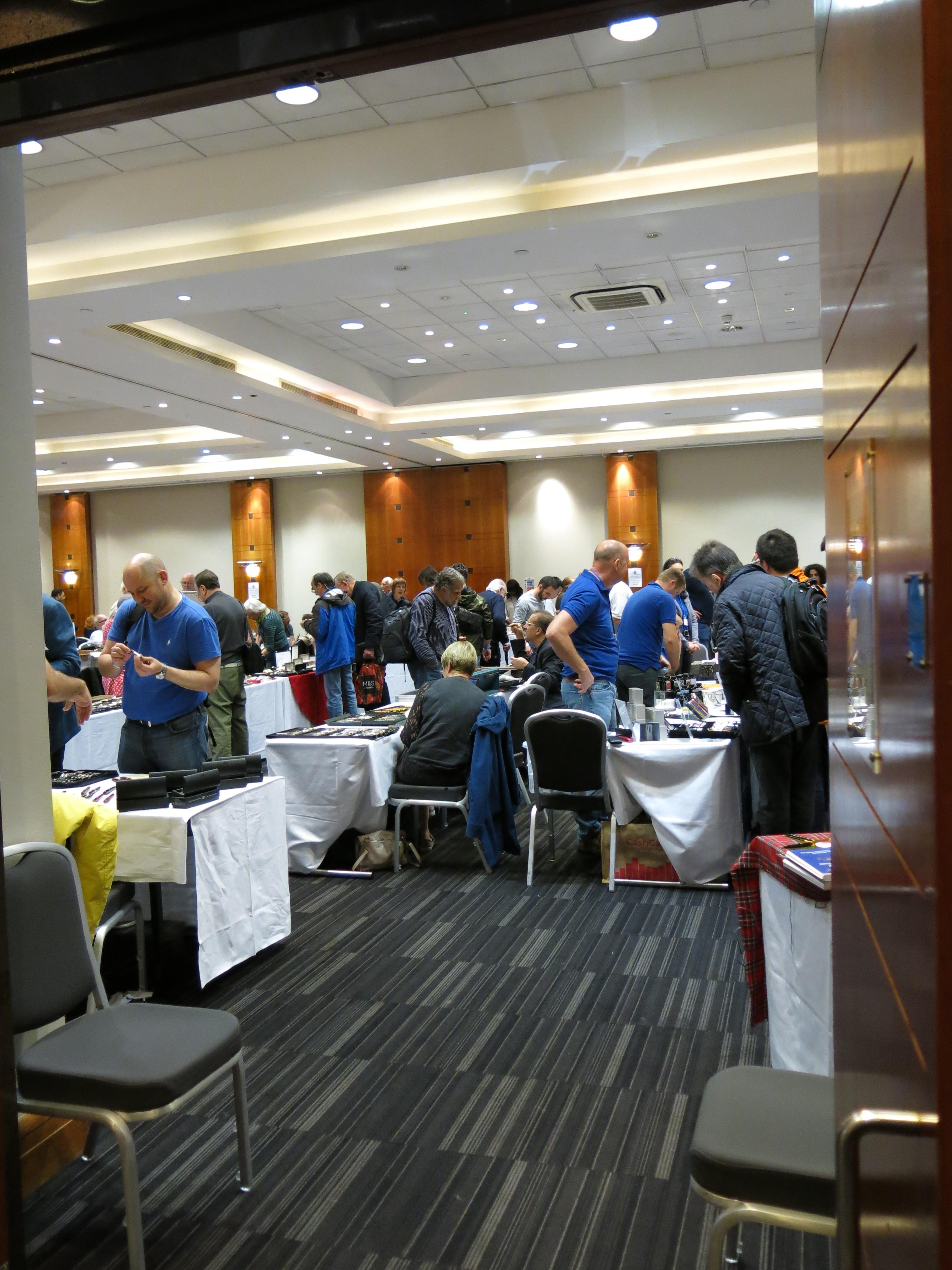 The second entrance to the main room.  Pure Pens just ahead.  Cruzalt Pens, with their large and expensive range of Namiki and Sailor Maki-E pens were just inside to the left 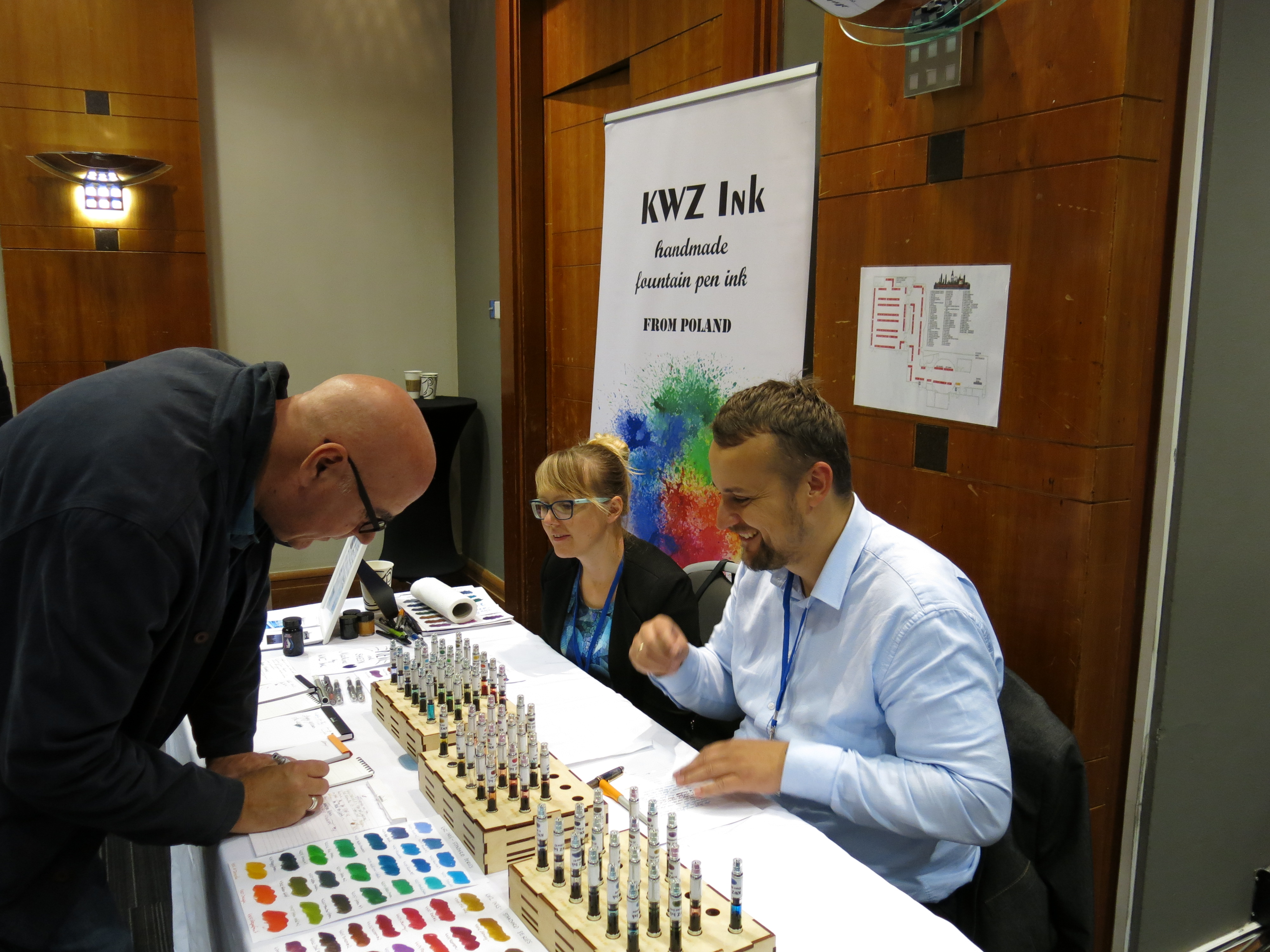 KWZI with their ink sampling table 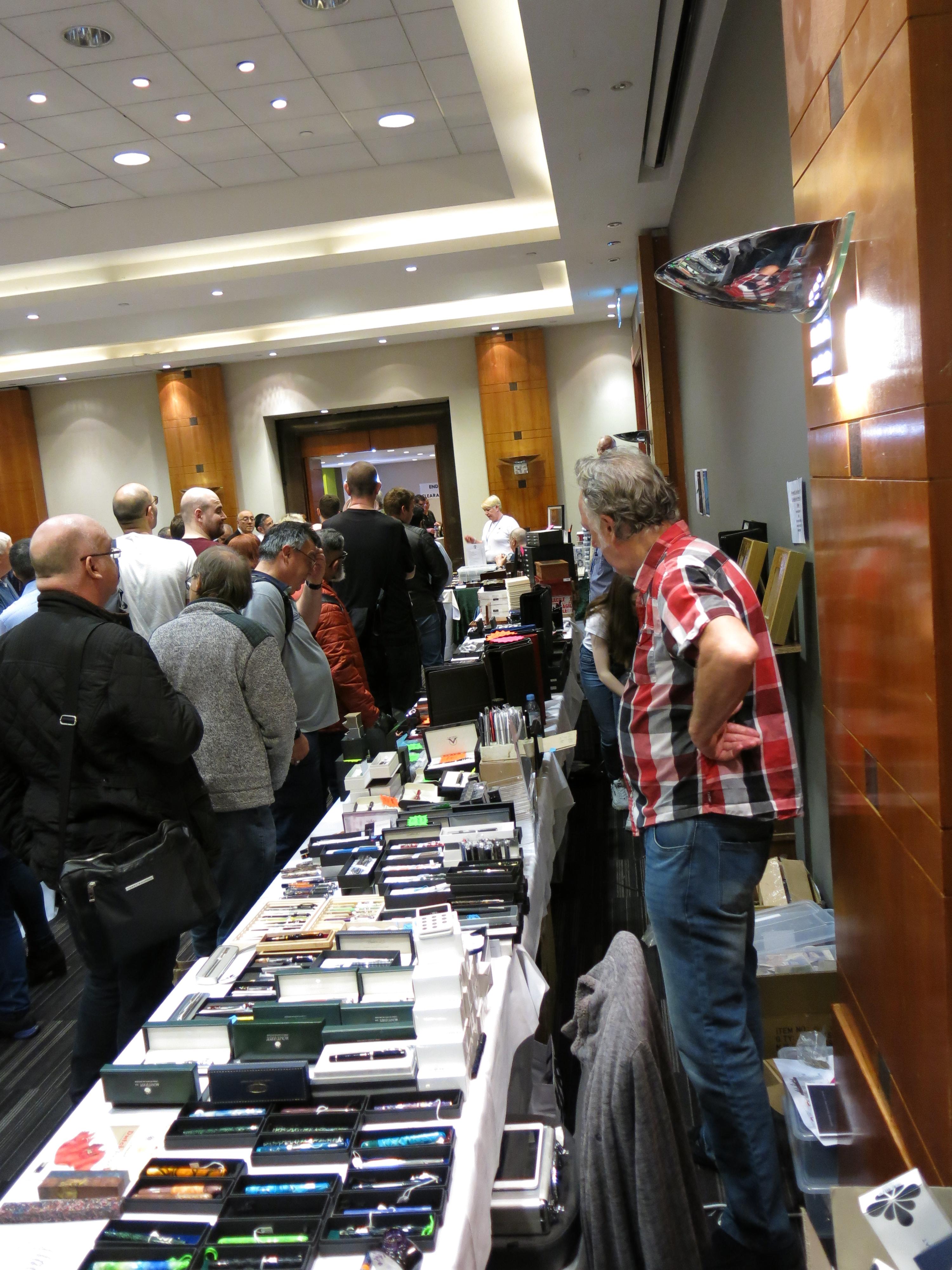 John Twiss in the foreground 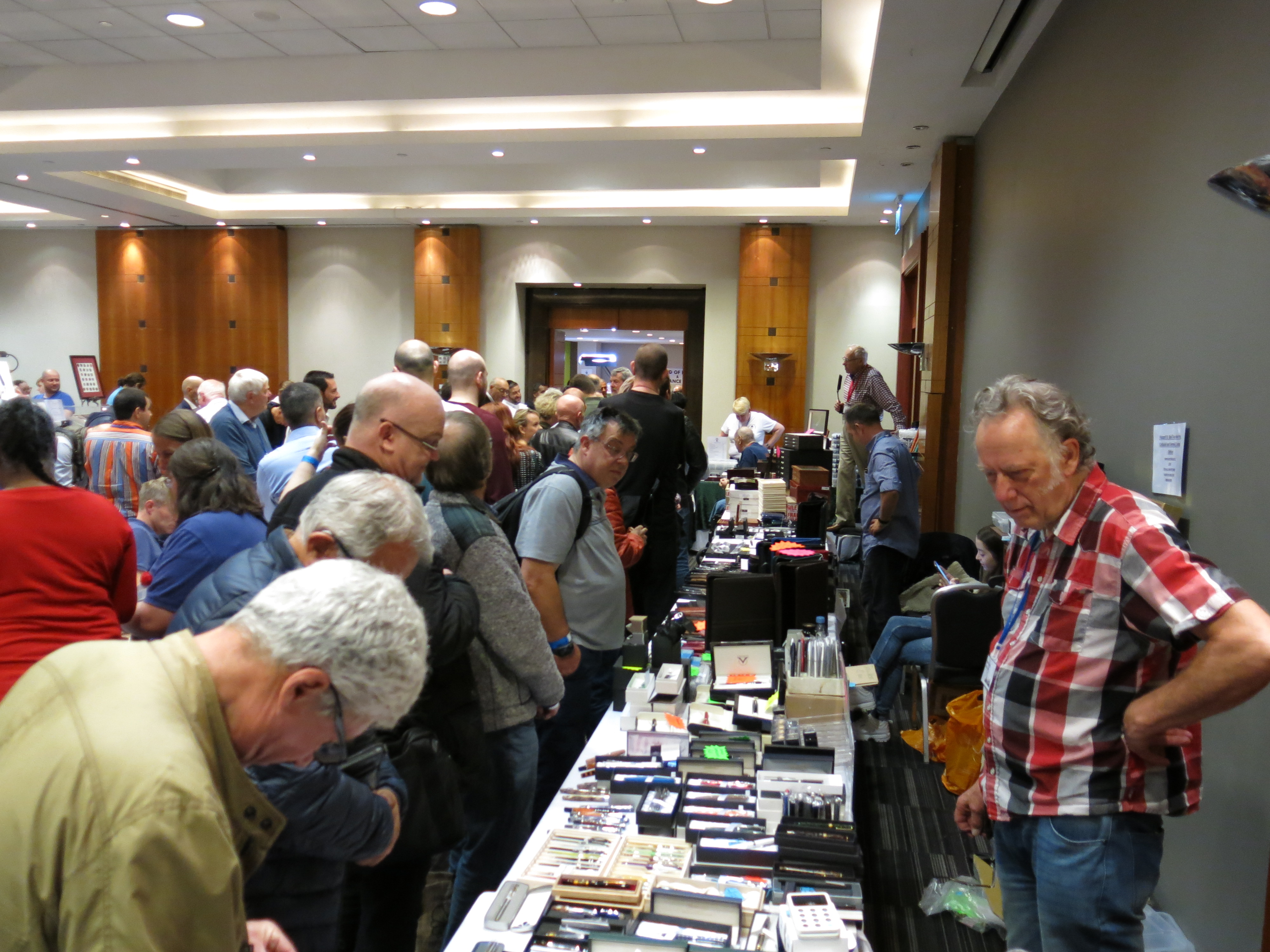 The big announcement going on in the far right

Around 1pm the big announcement was made.  Since 2007 Jeremy Collingridge and Ian Williamson have been running the show, however they have now decided it is time to stand down (Ian has been suffering from ill health and wheel chair bound for a while now).  The mantle will be picked up with John Twiss and Vince Coates (of Twiss Pens, The Turners Workshop, and joint, TwiCo), who restarted the Newcastle Pen Show a few years back.  Full details of then announcement can be found here.

With all the crowds it is nice to take a break and relax before heading back in or off.  There are comfy chairs and sofas by the show entrance, but most tend to settle in the cafe area. 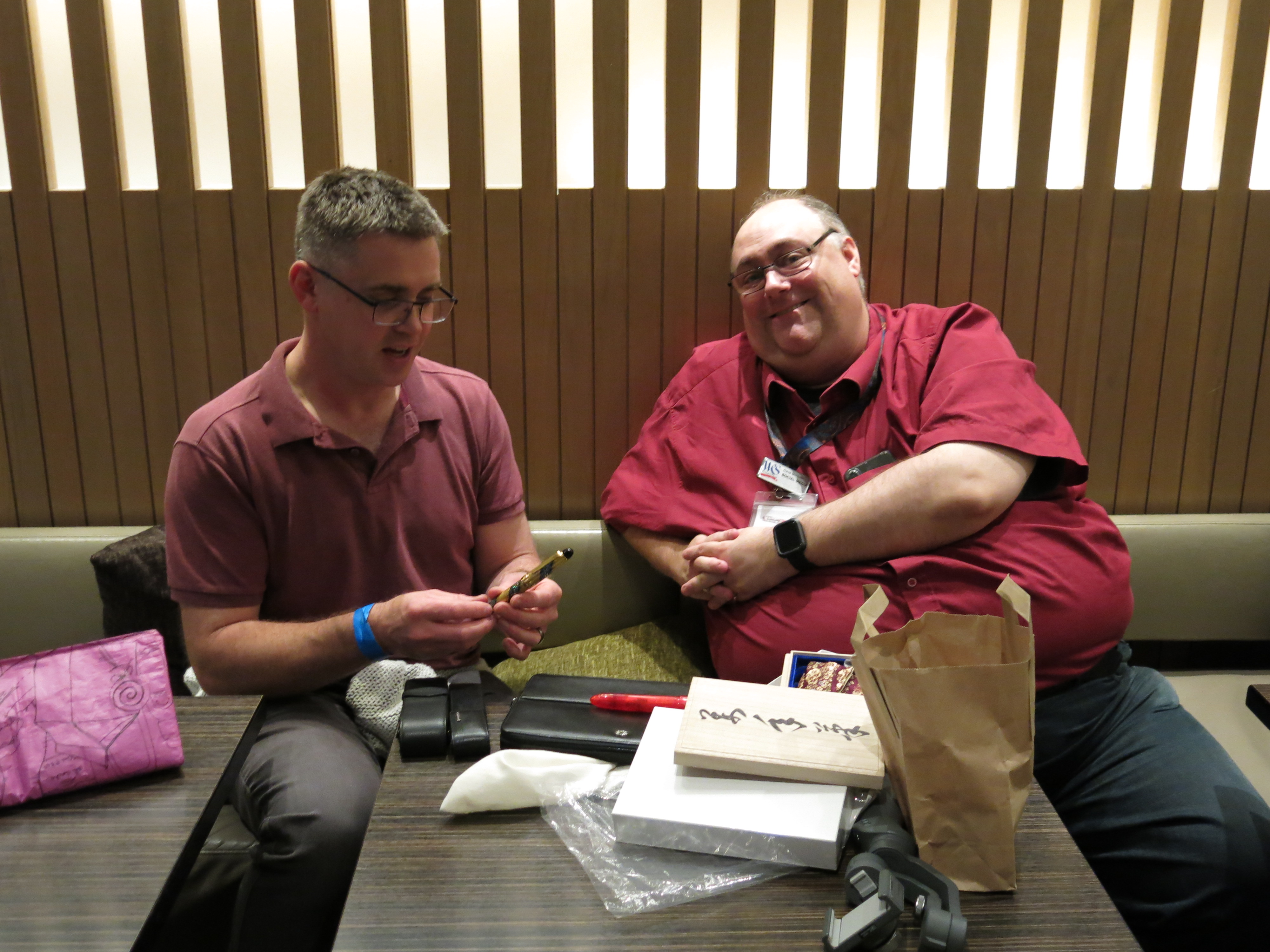 The cafe is often also used as a confessional – ‘woops, look what I just bought’ area

So the big question is, did I buy anything.  It is a silly question really, especially as I had approached John Hall at Write Here to bring a number along in advance (though I did make it clear one was only  a maybe, John was still happy to bring it).  So the damage list in order of purchase: 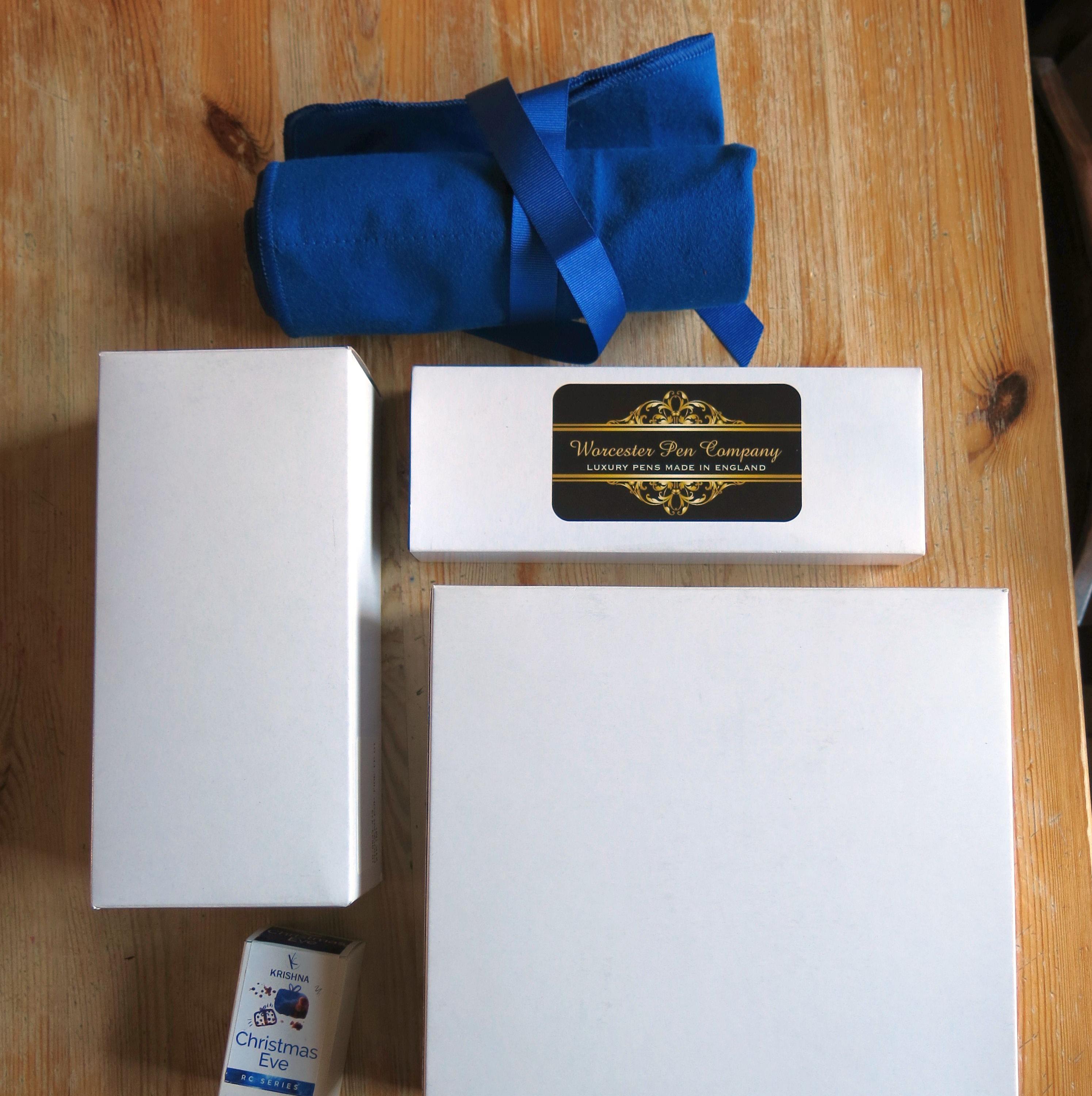 Dark Violet Lamy Scala 2019 Limited Edition, with the nib swapped to a fine gold (from Write Here).  As soon as I saw Lamy announce this one back in June it was on my radar.  I’m a big fan of the Scala with a gold nib and my 50th Anniversary Glacier pen is starting to show wear signs and so I’d like to semi-retire it, with this one becoming the full time pen attached to my Midori Traveller.  Now inked with ‘Faux Lamy’ Dark Lilac and in the pen loop.

Sailor Pro Gear King of Pen Fire Limited Edition with medium nib (from Write Here).  I’m a big fan of the KoP nib but had so far resisted pulling the trigger until I could find the right pen, or more accurately the right pen which is not going to cost me thousands of pounds (I love the look of their KoP Maki-E work – Cruzalt Pens did not help either).  From the launch pictures I was intrigued (as I had been with the Ocean and Earth models before).  In the flesh I was at first uncertain, but the colour does rapidly grow on you and is affected by light quality.  It’s more of a gold tinged orange than a red and does actually give off a feeling of warmth, so is a suitable colour for this limited edition.  Now inked with Kyo-Noto Moonlight over Higashiyama, which is actually a very similar, warm colour.

Onoto Multi Pen Wrap (from Onoto).  I actually meant to pick one of these up in March but forgot.  It’s not the sort of wrap to offer bash protection, but it will prevent scratching, plus the treated material is good for carrying around pens that could tarnish.

A bottle of Krishna Christmas Eve ink (from Pure Pens).

Pilot Vanishing Point 2019 Limited Edition, Tropical Turquoise with medium nib (from Cruzalt Pens).  This was another pen I wanted to see in advance – and had asked John Hall if he could bring one with him, but he had already sold out of his allocation.  In the flesh this pen comes across as darker, and to me more interesting, plus Cruzalt Pens had it for sale at a special pen show price which was hard to ignore.  Now inked with Pilot Iroshizuku Ku-Jaku.

Yard-O-Led Astoria Grand (from Regina Pens/Martini Auctions).  This was one of those unintentional buys, and potentially a very good bargain.  I went to look (as many of us do) at Regina’s stall to see what bargains she had brought with her.  As with last time it was Visconti Homosapiens, however this Yard-O-Led from around 2010 stood out from a tray of mixed pens.  Regina picked it up a while back and was treating it as a quick shift, which was good for me.  I’ve contacted Yard-O-led to see if they can shed any light on the model.  It’s inked with Diamine Teal and is a joy to write with (I described it to one person as “smooooth nib, so smooth it listens to soft improv jazz“.  The one catch with it is I’m certain the clip band has been replaced as it feels too cold to be silver and is missing the hallmarks that should be there, plus I think it’s thinner than it should be (depth between surface and pen).  Also, it was boxless. A good video on this model on Youtube by Grandmia can be found here where you can see the cap ring should be slightly raised, not flat like on mine.

Worcester Pens Company Serenity in OMAS acrylic with a medium nib (from The Worcester Pen Company).  I’ve wanted to try a pen from this small (one man band) company for a while but they missed the last show as it was the same day as the first birthday of Brian’s grand kid.  This is a new model in his line, which has no clip and also where the cap is virtually (but not quite) flush with the barrel.  Now inked with Cult Pens Deep Dark Orange.

Delta Dolce Vita Oro Piston with a medium steel nib (from John Foye/St. John’s Pens).  Ok I’ve fancied a Delta Docle Vita from before the company went under but was put off partly by their reputation and also partly by the fusion nib.   Additionally I wanted a piston filler, where as most seem to be cartridge converter (including the oversized versions).  I’m not entirely sure why as I prefer the latter due to ease of maintenance and cleaning.  Anyhow I had seen one on John’s table back in March and again while talking to him this time it jumped out at me (the colour or the Oro version does stand out).  It is a beautiful pen and now loaded with Pilot Iroshizuku Yu-Yake, however in true Delta fashion the pen would barely write, and looking at it there tines were too tight.  A little careful prying up and now the pen writes well, but oh so typical latter day Delta.  One thing of note, this pen came with a gold coloured steel nib, which I suspect was a swap in to replace a fussion nib. 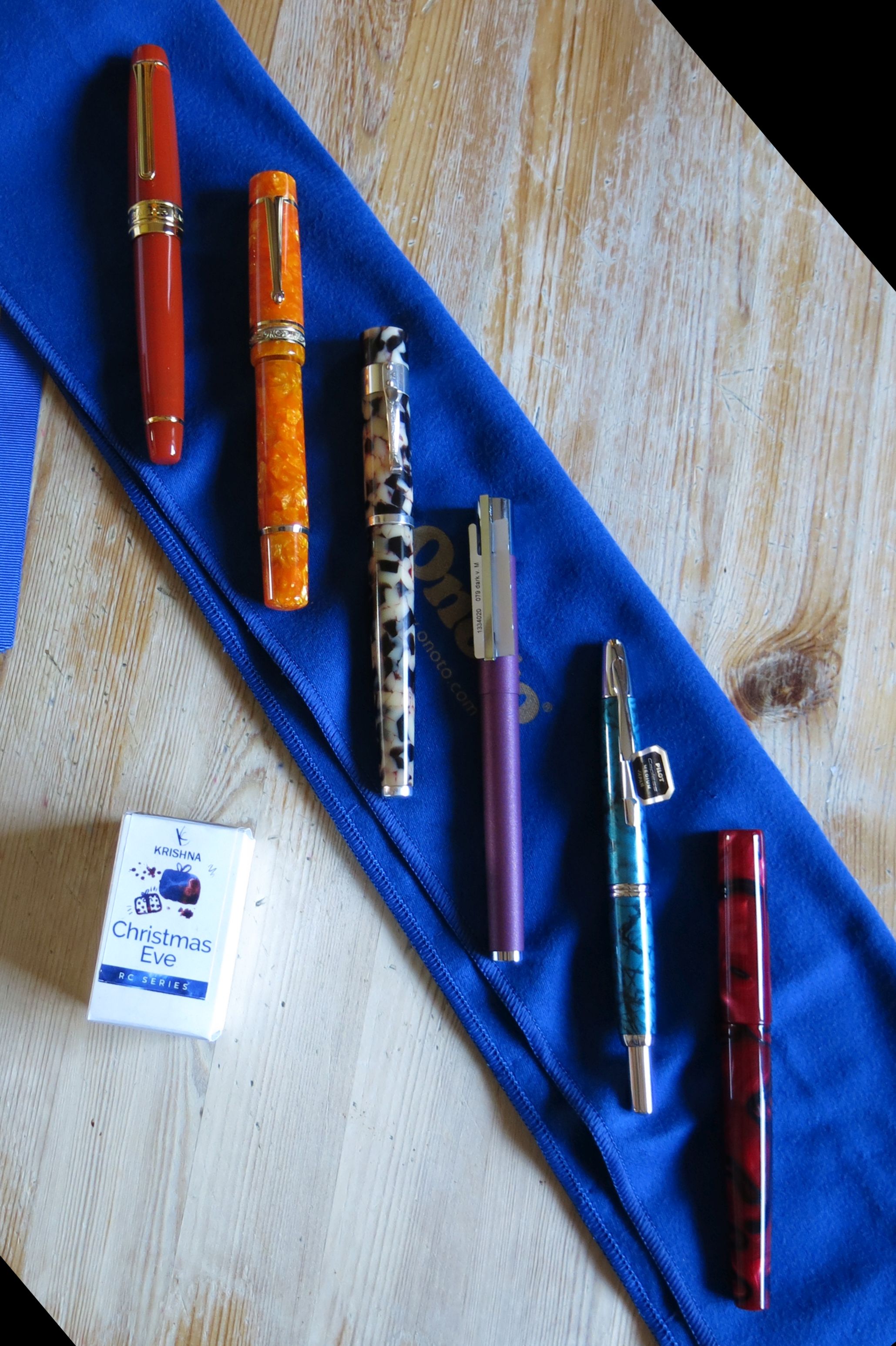