These days most people associate Yard-O-Led (YOL) with a range of sterling silver writing implements hand crafted from a workshop in the Jewellery Quarter of Birmingham, UK, however back before the 2015 buyout from their previous owners Letts, they had other pens in their inventory.

The Astoria range was created (as far as I can tell) in 2010 and ran for just a few years (till 2013?).  While the bands, finials, clip, and sections were still sterling silver, the barrel and caps were made out of either a marbled ebony or cream acrylic.  The design invoked an art deco feel from the 1920s and included the famous propelling pencil as well as a ballpoint, fountain pen and an oversized fountain pen (the Grand). 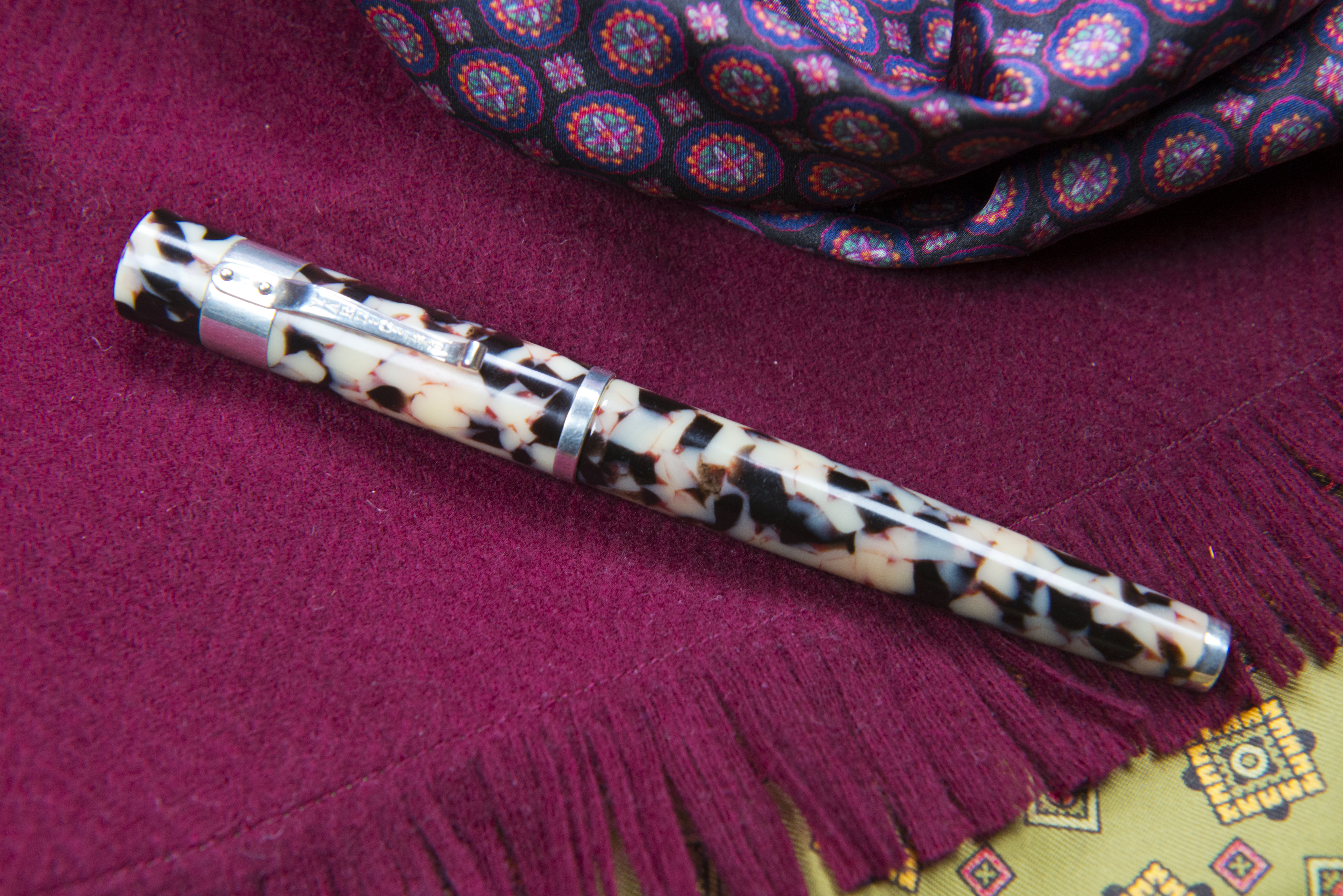 Confession time.  Having tried one at the 2017 London Writing Equipment Show I had made the decision that I would treat myself to a Yard-O-Led Viceroy Grand Victorian fountain pen as a ‘to myself’ retirement present.  This is still probably the case but I do have a few years to go so this purchase was coincidental.  Instead I fell foul of the cardinal pen show sin of the impromptu purchase at the October 2019 London Pen Show.  Walking past the Regina Pens/Martini Auctions table I spotted an unusual pen sitting there in a display tray, and asked Regina to show it to me.  This was a YOL Grand Astoria in cream which she had recently picked up and was being sold as was (it had been properly cleaned), which meant no box or documentation.  I felt the price was good and went for it.  Even in the bar after, showing it to friends, I felt no regrets and was determined to find some information on the model.  The latter proved more difficult than I expected and an initial enquiry went unanswered.  Since then I’ve found the correct route so expect a potential follow up to this article in the future. 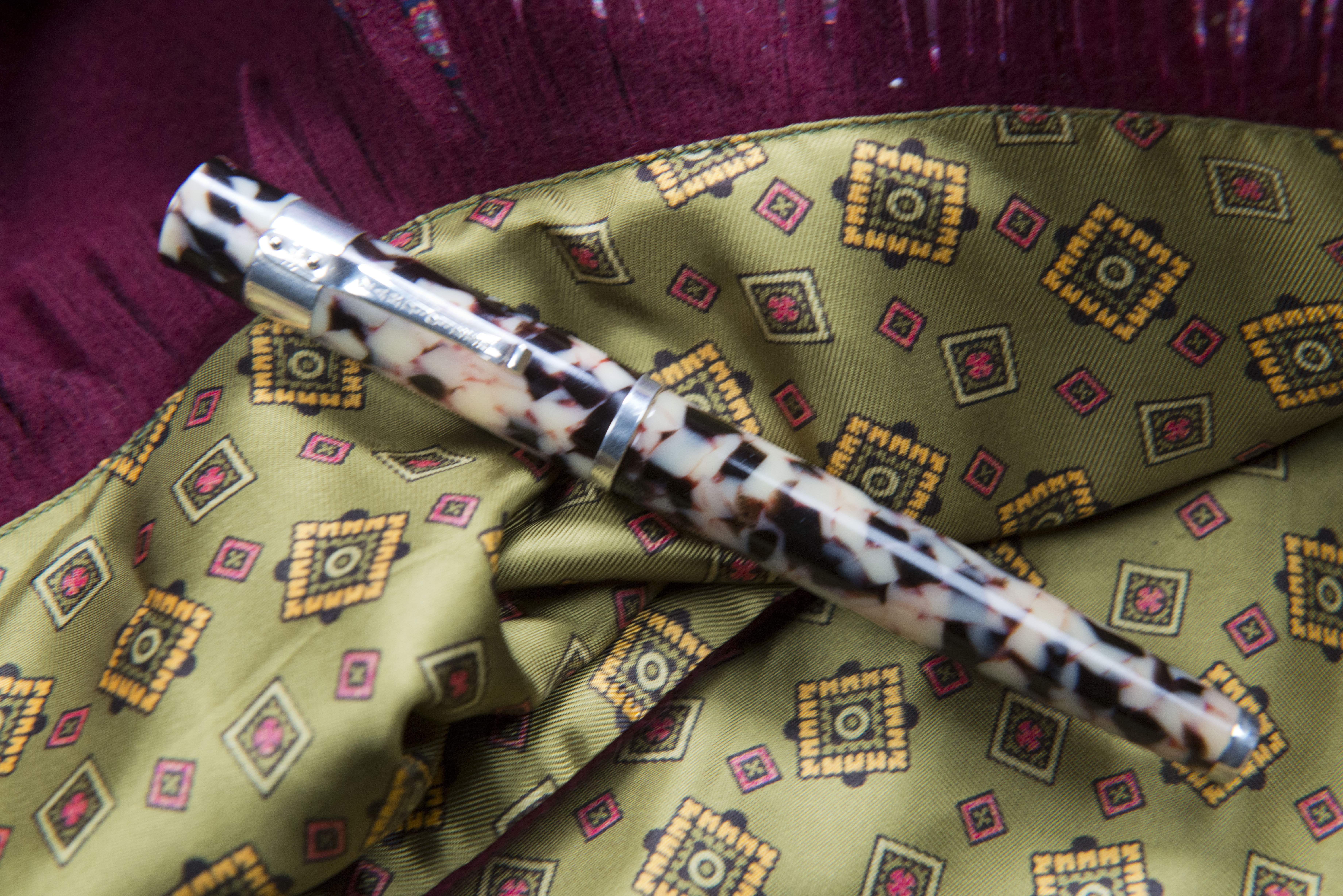 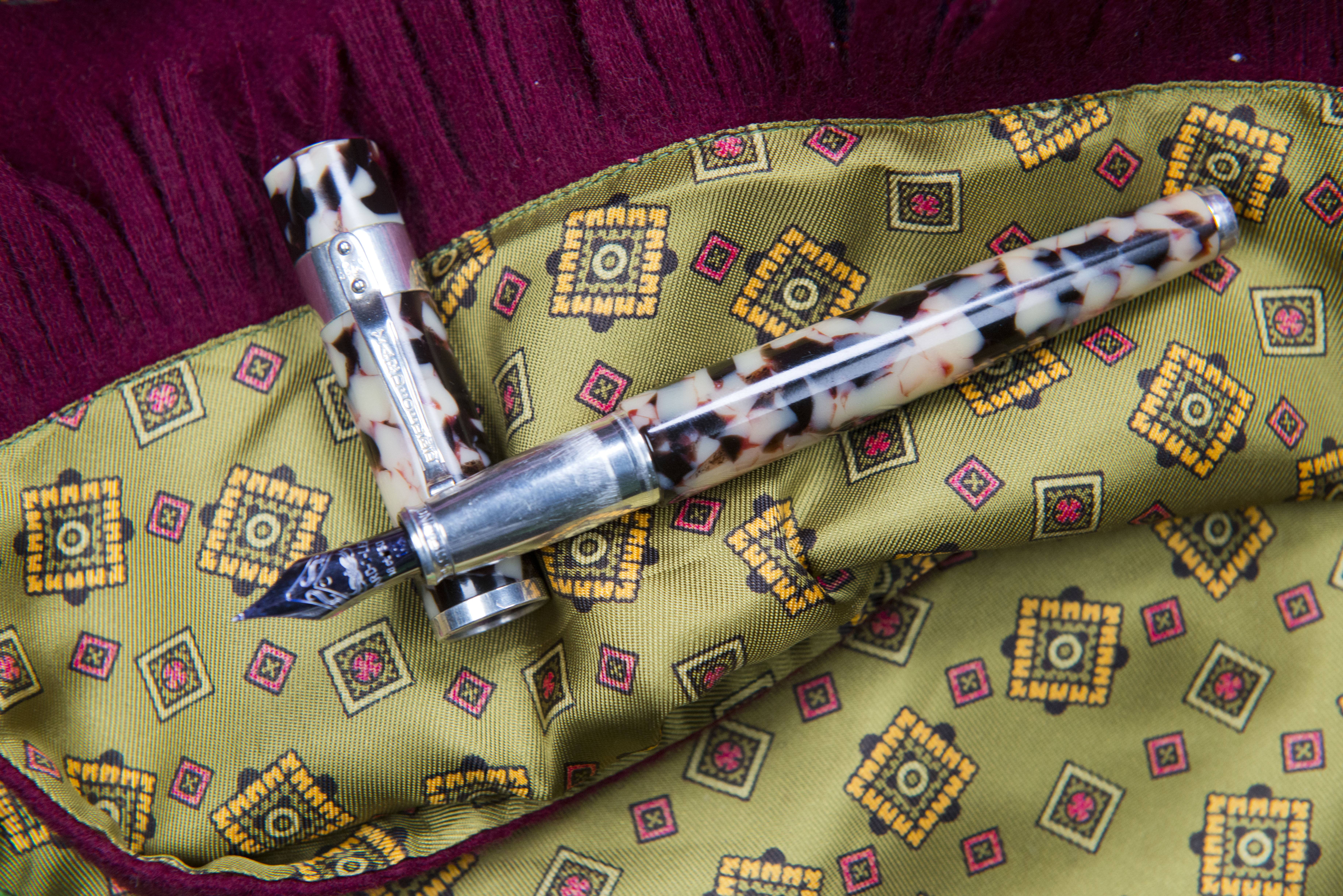 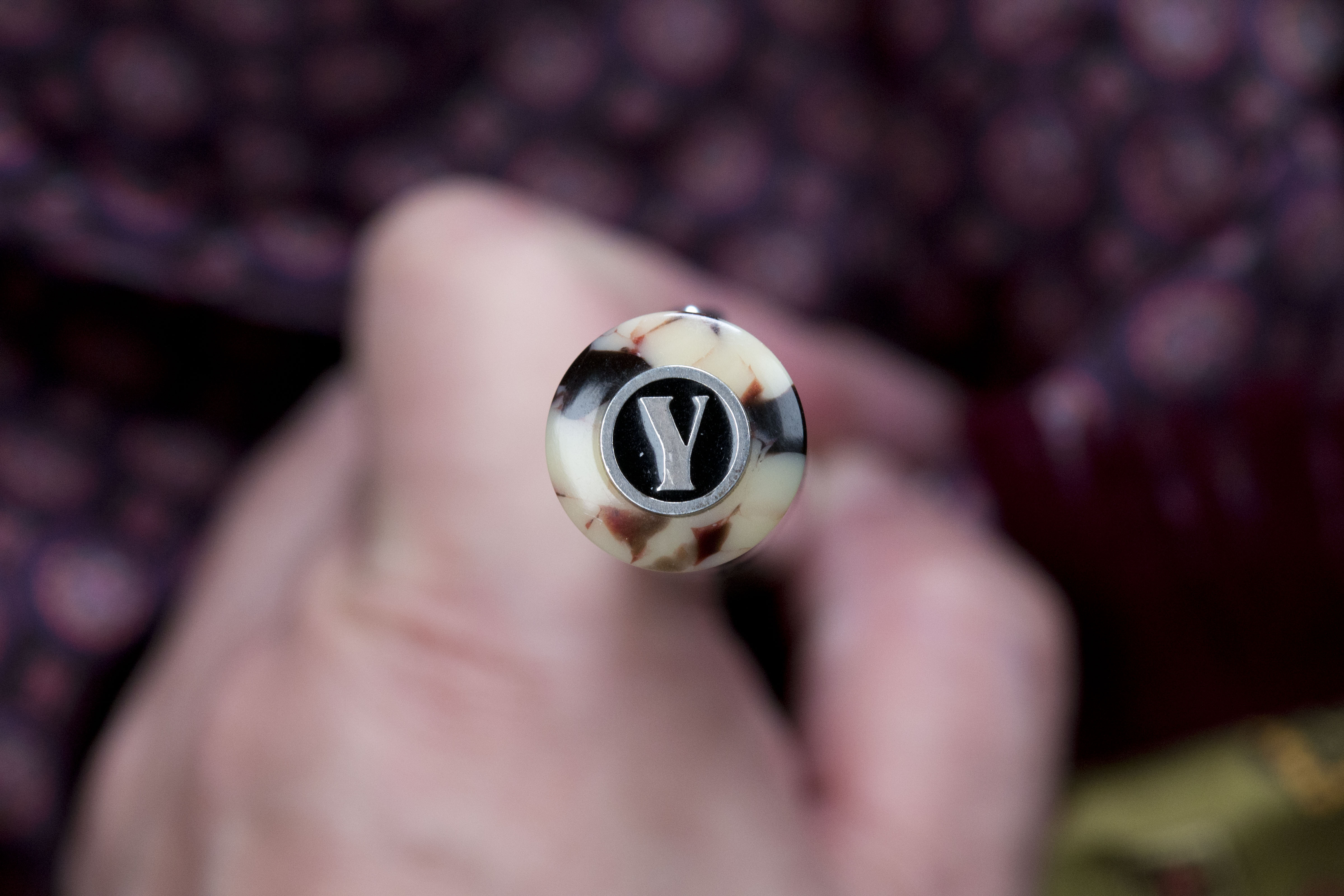 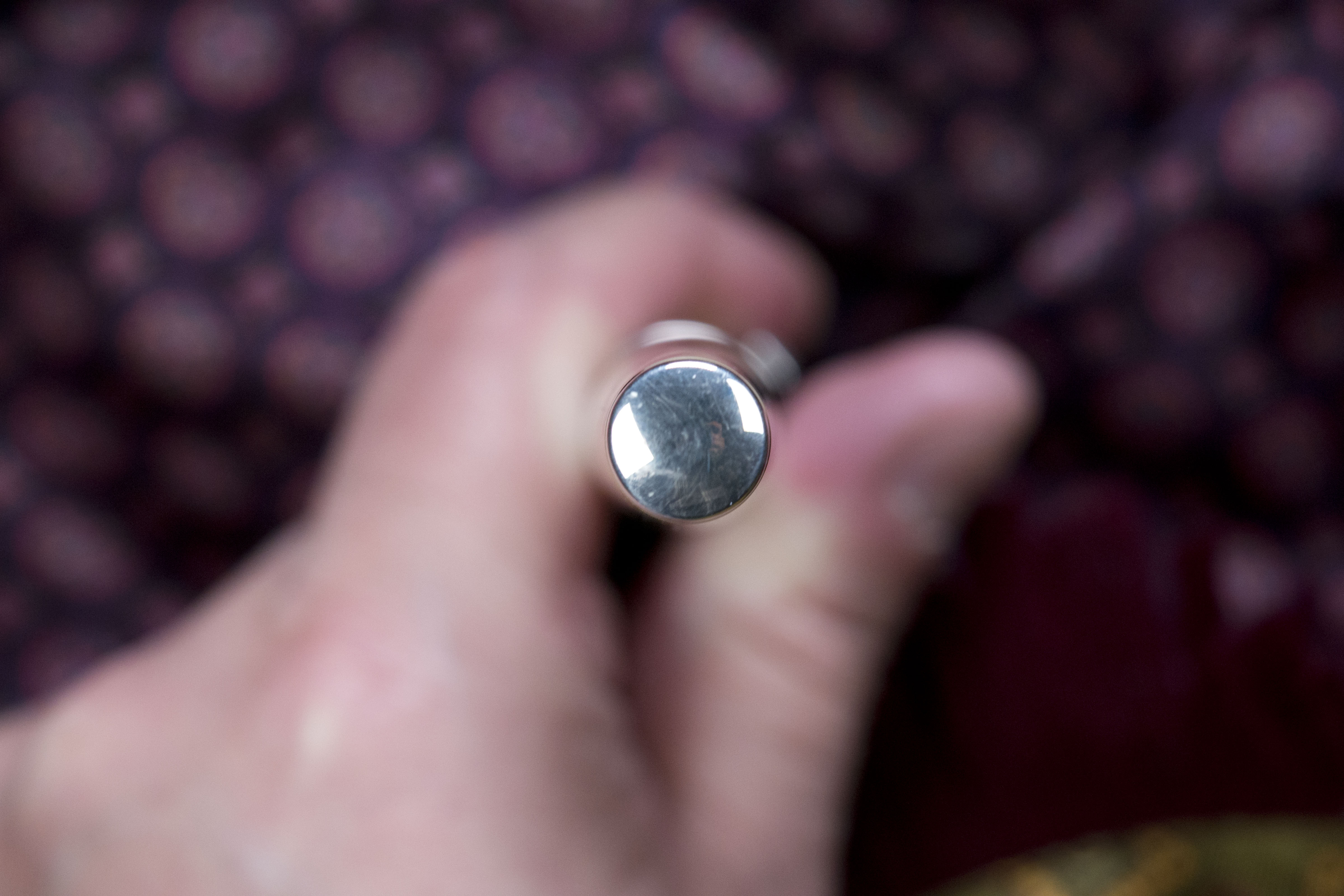 Shape wise it is the cap that shows the inspiration for earlier times.  The body and section are the classic YOL curved affair you see on all their present fountain pens, but the cap is straight with the clip held on by an external band, harking back to an earlier age.  The finial has a small sterling silver disk on top of it containing the Yard-O-Led Y with the space around the letter being filled with black enamel.  Moving downwards there is a wide clip band which should contain the hallmarks for the pen (more on this later) and then at the bottom, around the opening to the cap there is a thinner sterling silver ring.  Inside there is a plastic inner cap which starts about half way up and seems to do a reasonable job. 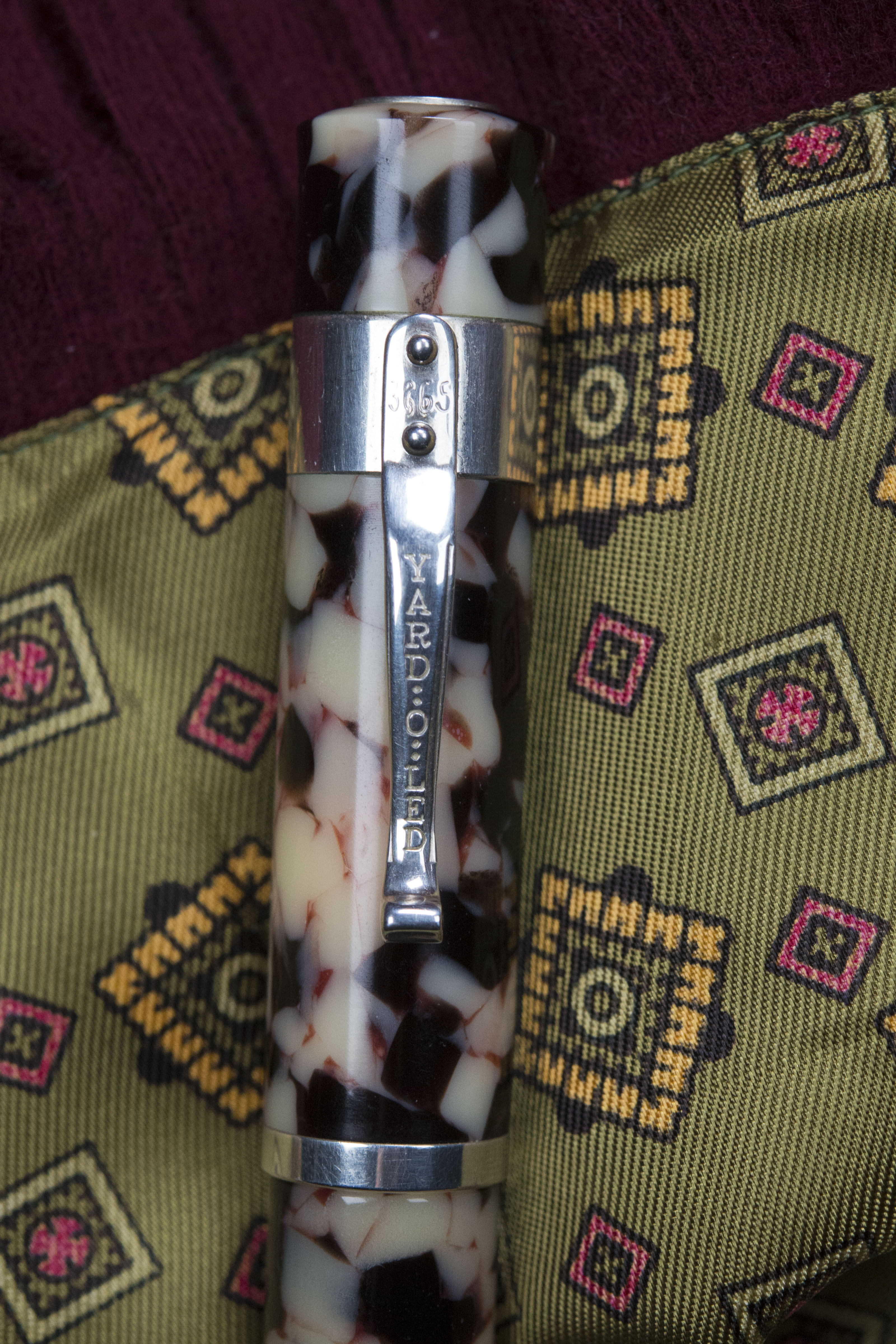 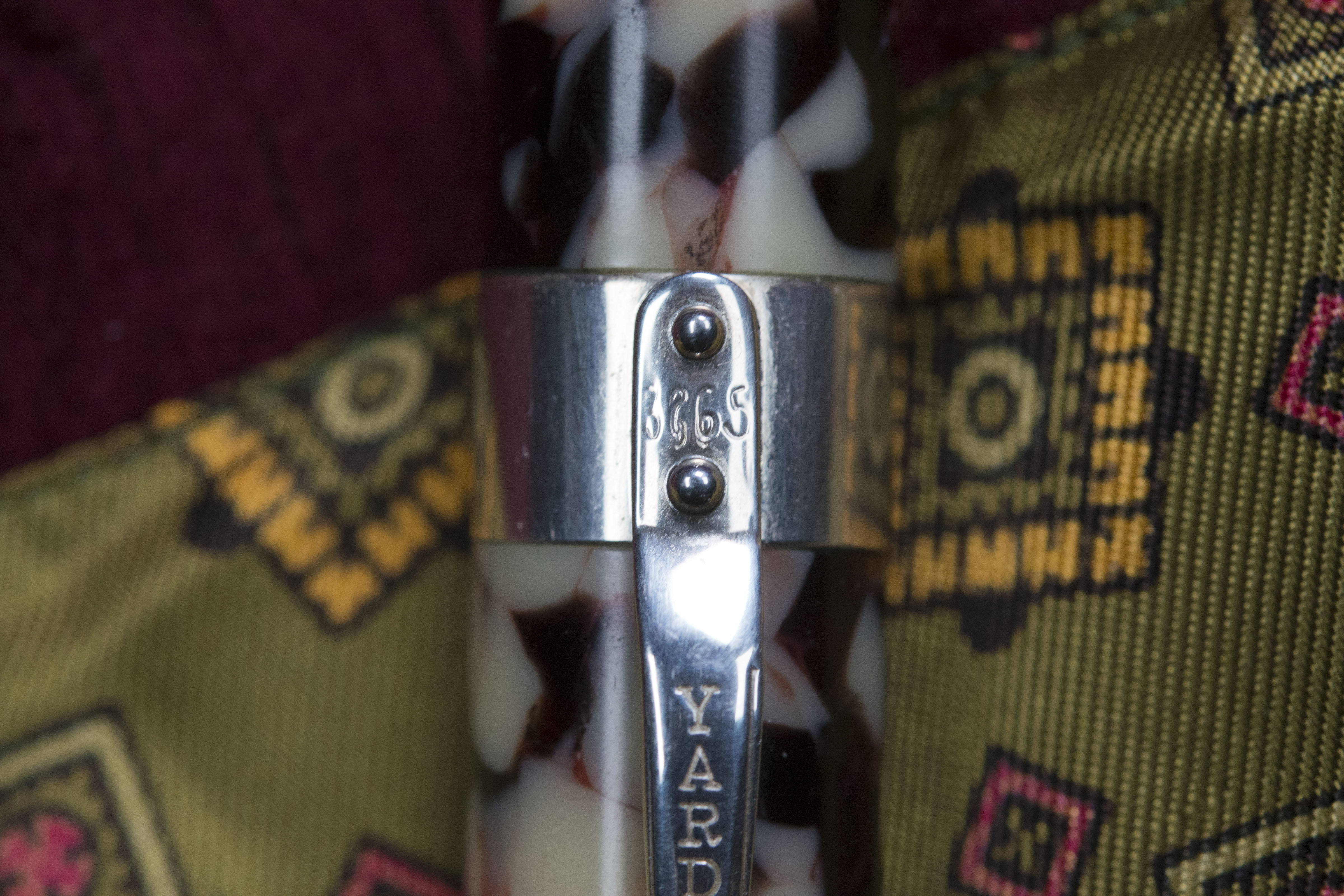 The clip is the classical YOL affair, fixed to the band by two pins with the serial number stamped between these.  It curves out about quarter the way, straightens back to the cap for most the remaining length then once more curves out to a small barrel type nub.  Whilst being made of sterling silver, it feels strong and does work very well.  I suspect in the past the clip was used a lot by a former owner with stress being put on to the holding band resulting over time in it cracking and needing replacing.  Alas this replacement was made of sprung steel, and while it looks the part, it does mean I am now missing the all important hallmarks. 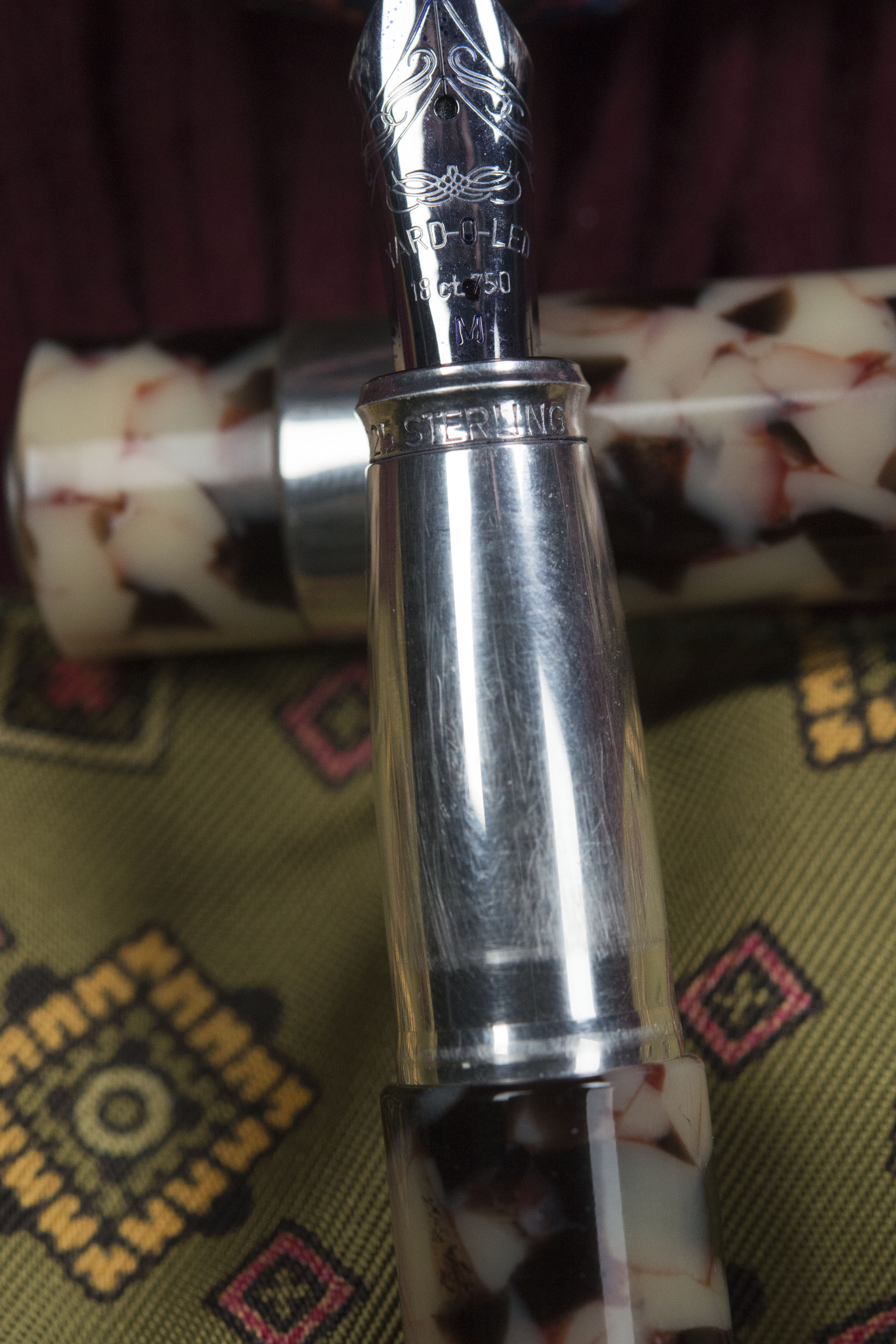 The grip is comparatively long with a hoop by the nib, gently curving out then straitening out near where it meets the barrel.  There is a deep line by the hoop indicating it may actually be a separate piece, also looking at this part it may well secure the nib within the inner cap and also act as the securing clutch.  At the end of the section it curves out slightly more to meet the barrel.  The threads are an inserted unit within the section, and I’m not sure if they are also sterling silver.  There is a rubber ring gasket at the section end of the threads to help secure the barrel in place. 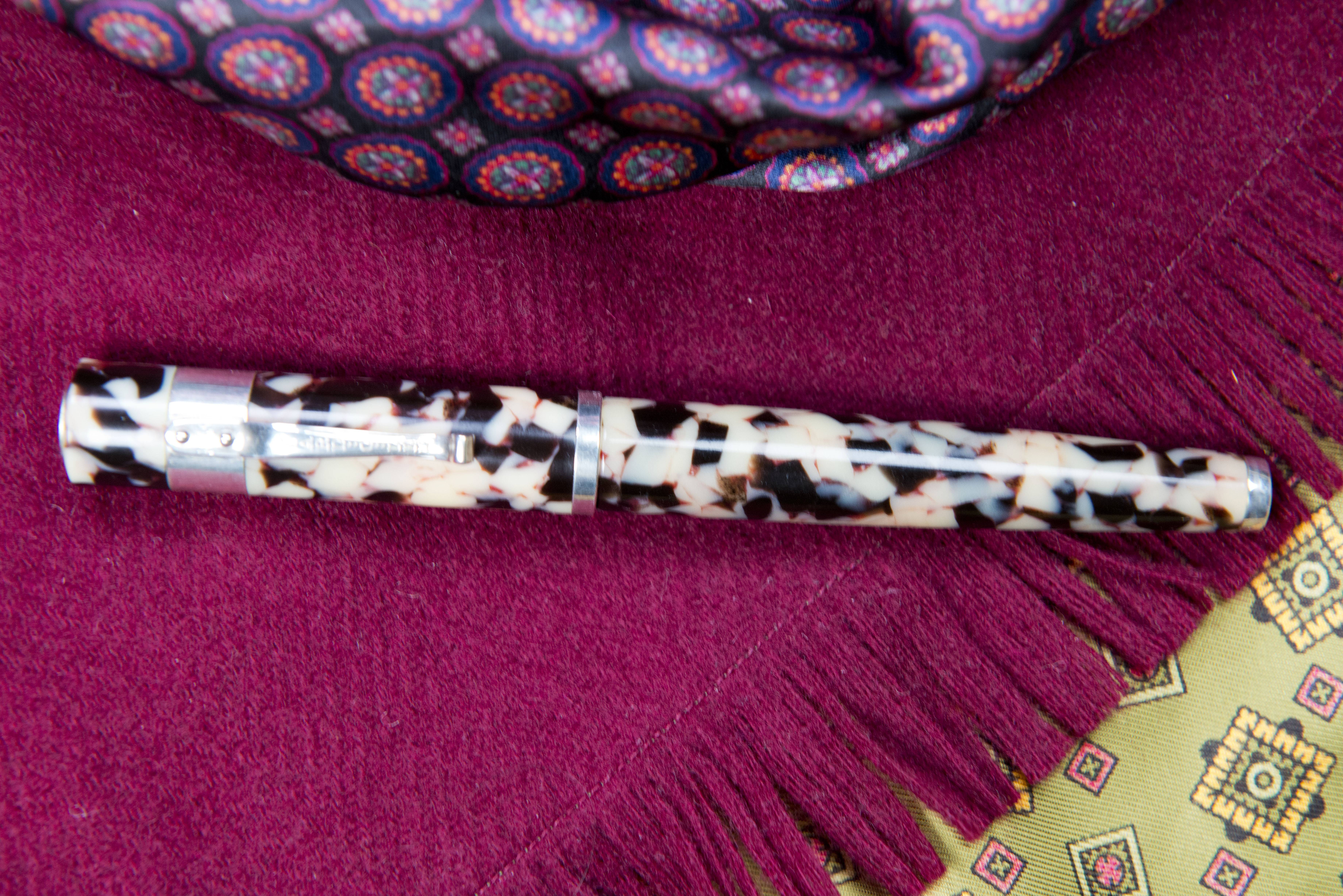 The barrel slopes in a gentle curve towards the solid piece finial.  At first glances it appears to be a straight line, but looking more closely it is not.  The end is just over half the size of the start.  Over all uncapped it gives the pen a very classical appearance, and when capped the 1920s influences work well a century later. 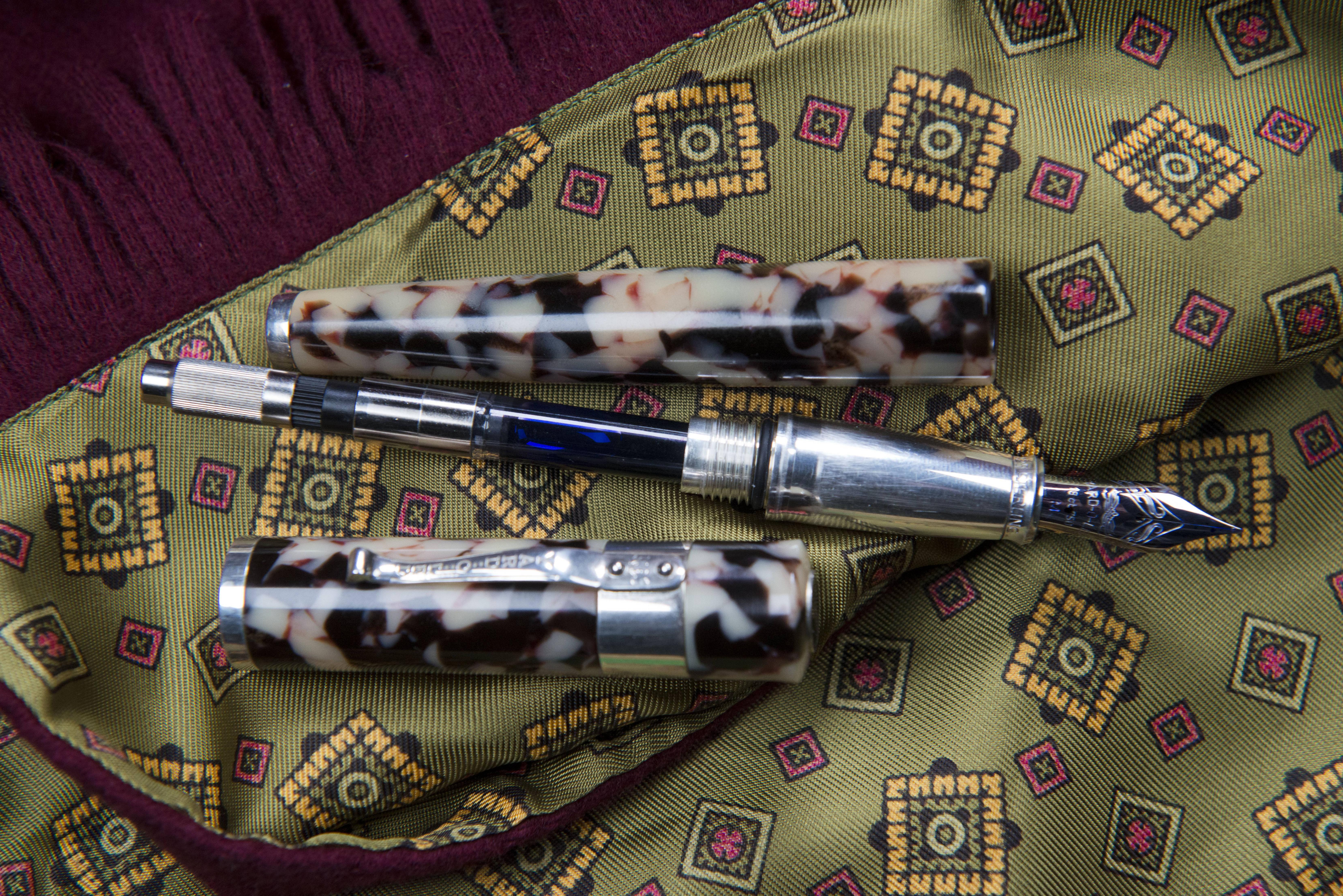 The filling mechanism is international standard converter or cartridges.  It came with the YOL stock converter which looks like a Schmidt K5 with a knurled grip secured over the plastic turning nob.  I assume this can be pulled off and slid over a replacement converter if the need were to arise. 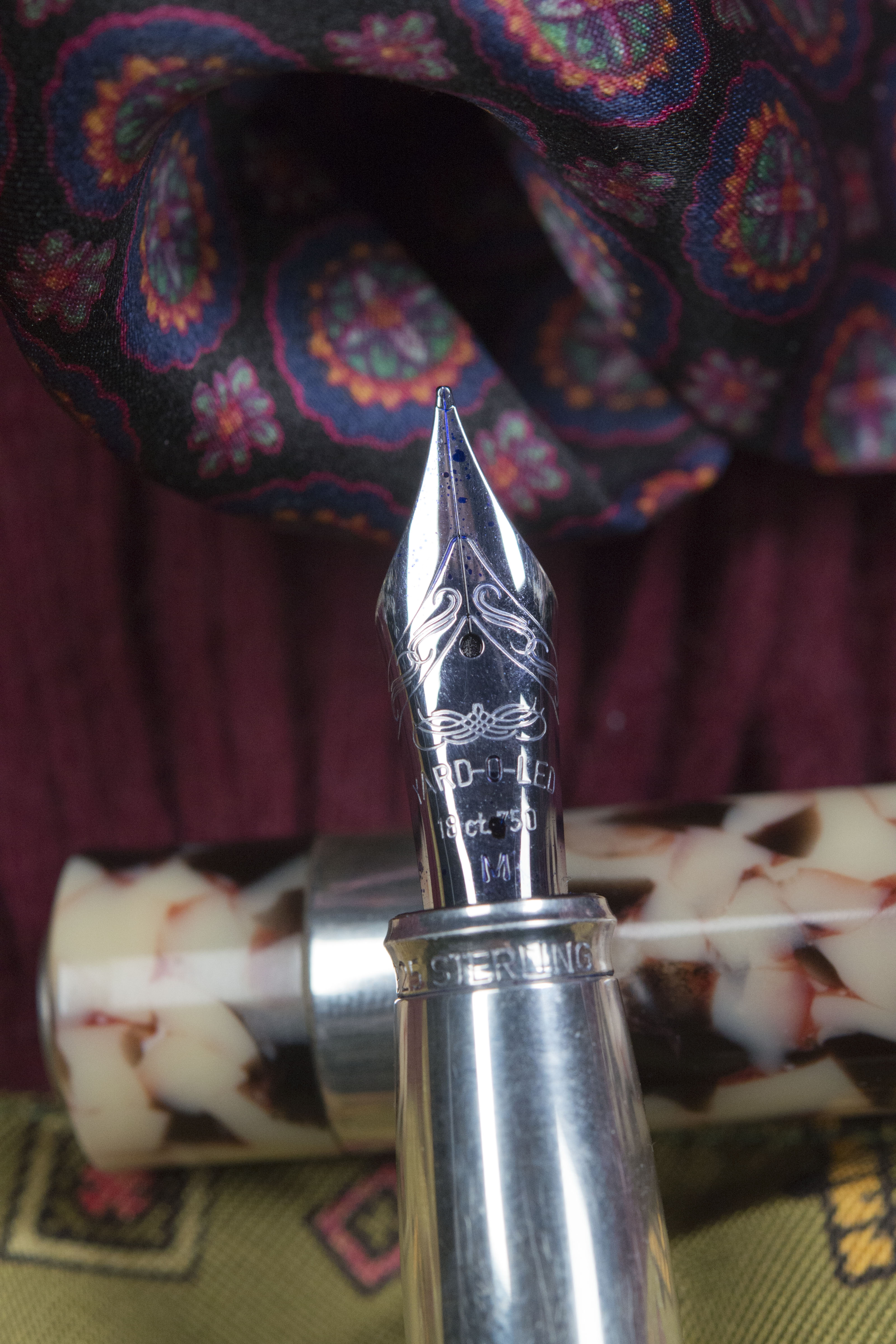 The nib is an gold 18k rhodium plated affair made by Bock.  I do not know if it is stock with the YOL patterns stamped/engraved upon it or if it is made to their own specification.  Certainly every YOL nib I have tried has been silky smooth and written very well, so I suspect even if stock nibs, these have all been hand tuned in the workshop.

The writing experience is superb.  The nib floats across paper laying down a wet line.  I have recently noticed some initial hard starting, but I did leave the pen for over a month without using it (at the time filled with Diamine teal) so I suspect when refilling with Diamine cornflower I did not clean the pen out as well as I first thought.  Certainly when the ink starts to flow there is no skipping.  It must also be remembered this is not a new pen and has an unknown background.

So am I happy with my bad boy unplanned purchase.  Oh yes.  The lack of the original clip band with the hallmarks would only be an issue if I were to try and sell this pen for it’s full value.  I’ve no plans to do so at present, plus I still consider the amount it cost me to be decent, even without provenance and the crucial stamps.  While I know Regina will have made some money on this pen I certainly think I got a good deal.

Recently I spoke to Yard-O-Led over this pen both for it’s history and over potentially having the clip band replaced and new hallmarks applied.  I’ve been pointed at the correct contact form to complete and will do so shortly – as they also asked for some photos, these will be taken as part of the set for this review.  I am still in two minds whether to get the clip band replaced.

Would I recommend this pen to others.  It is like any other high end pen.  You really should try before buying.  Cost wise these were around £350 for the Grand when it came out, rising to around £420 by 2013.  I have seen them down for clearance in ~2014, presumably when the model was dropped, for as low as £250, however now they seem to go for between £450 and £750, so values are rising.  I would hope the higher end ones are mint/NOS with box and no signs of usage.  Mine certainly would not fit in to this bracket. 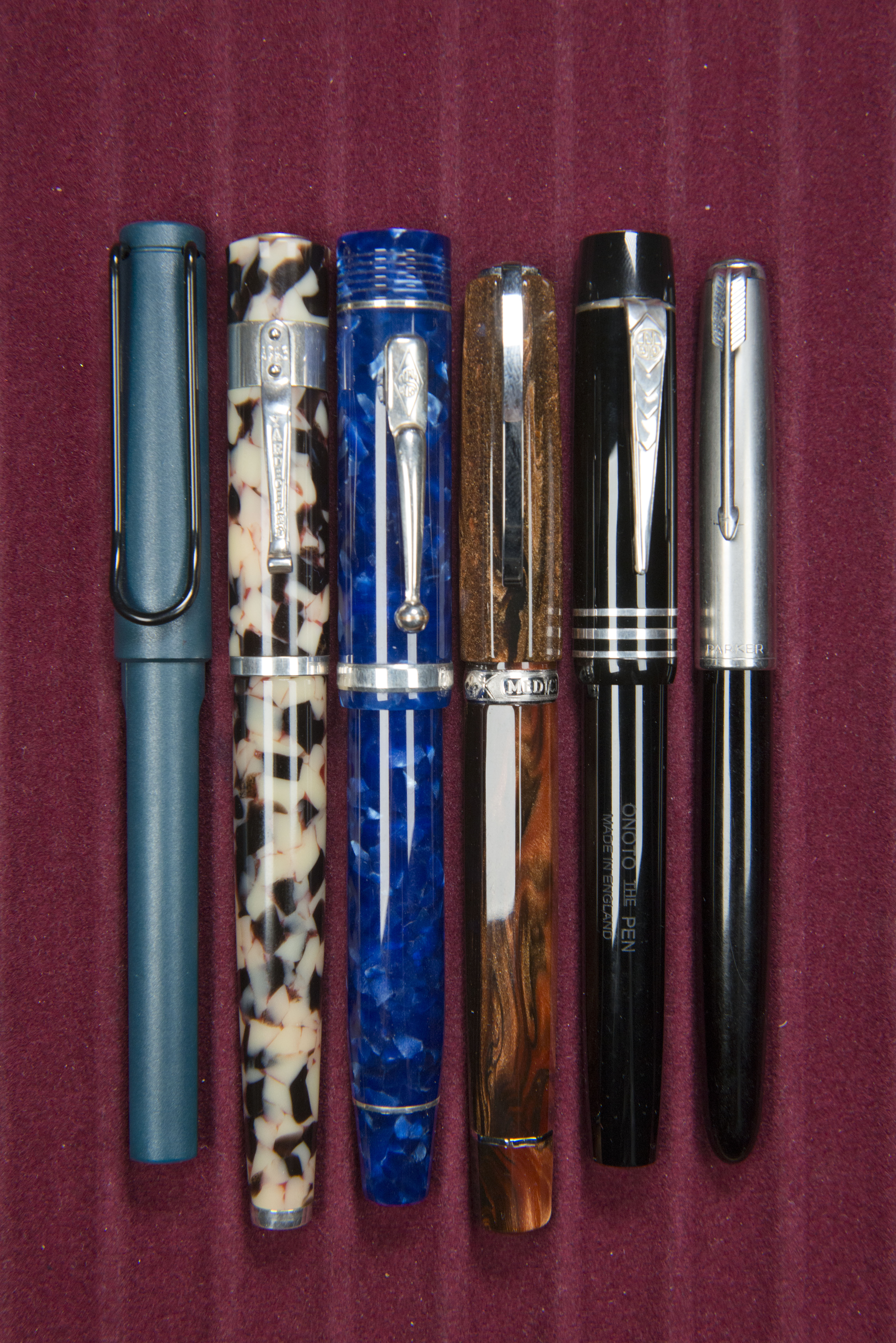 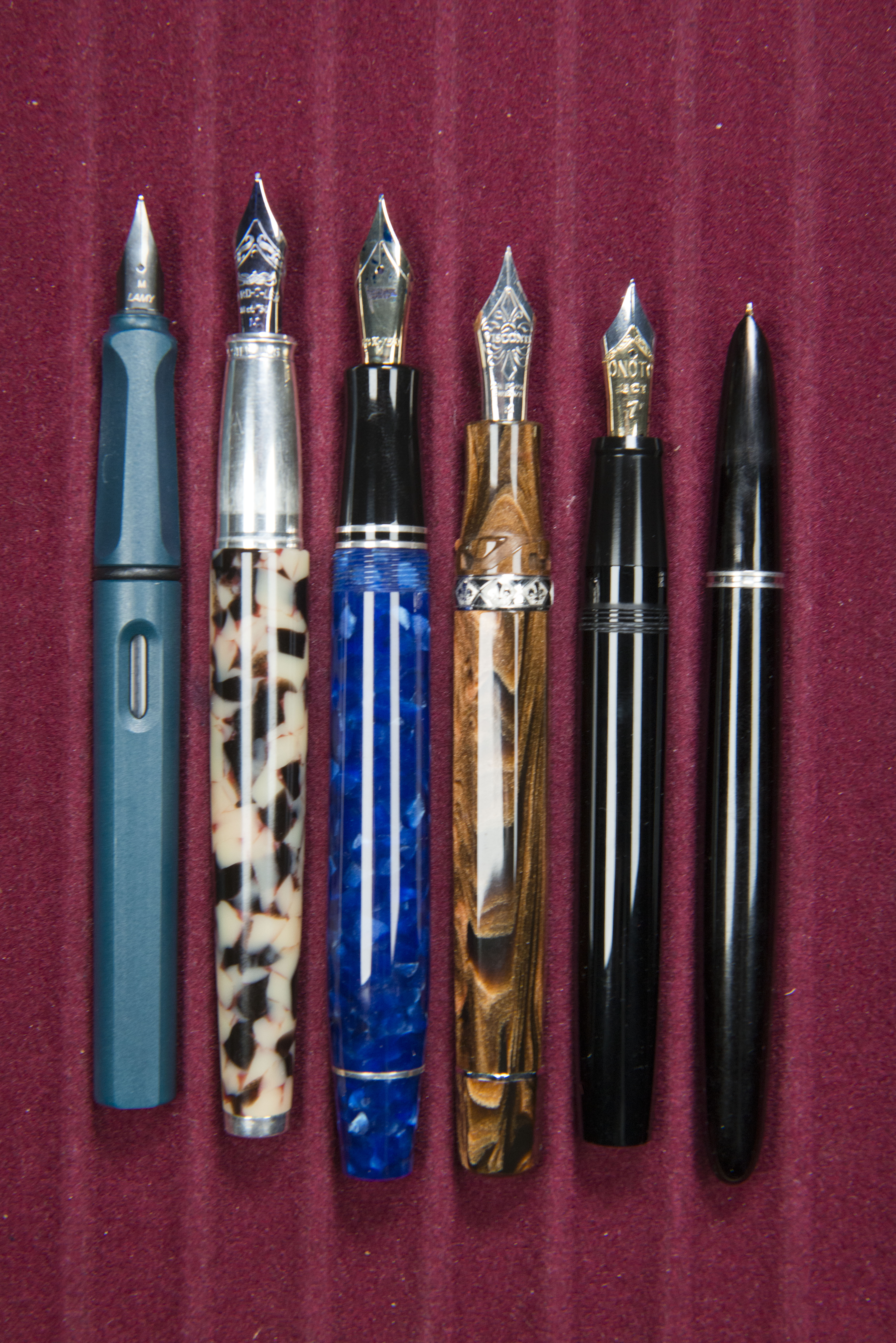 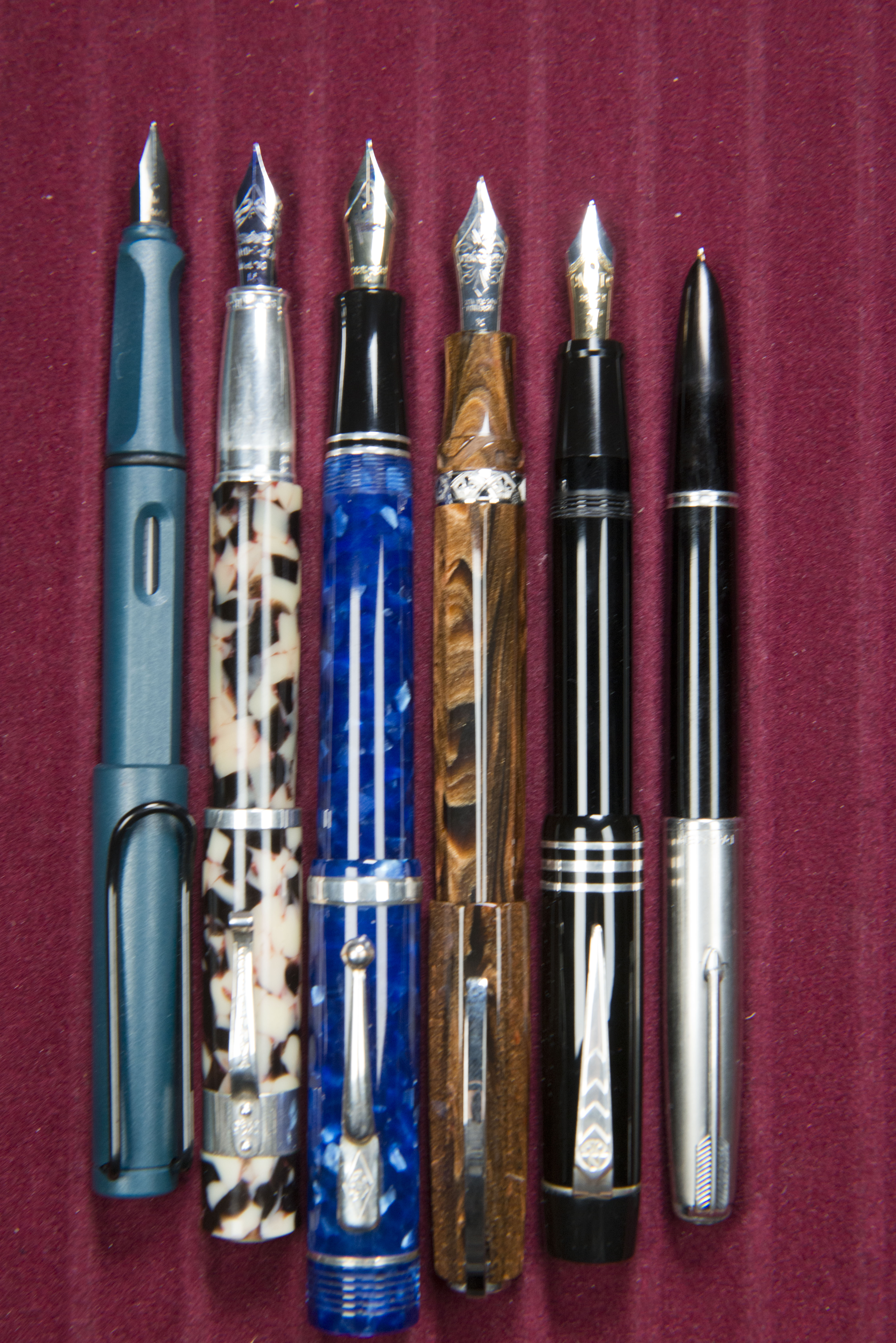 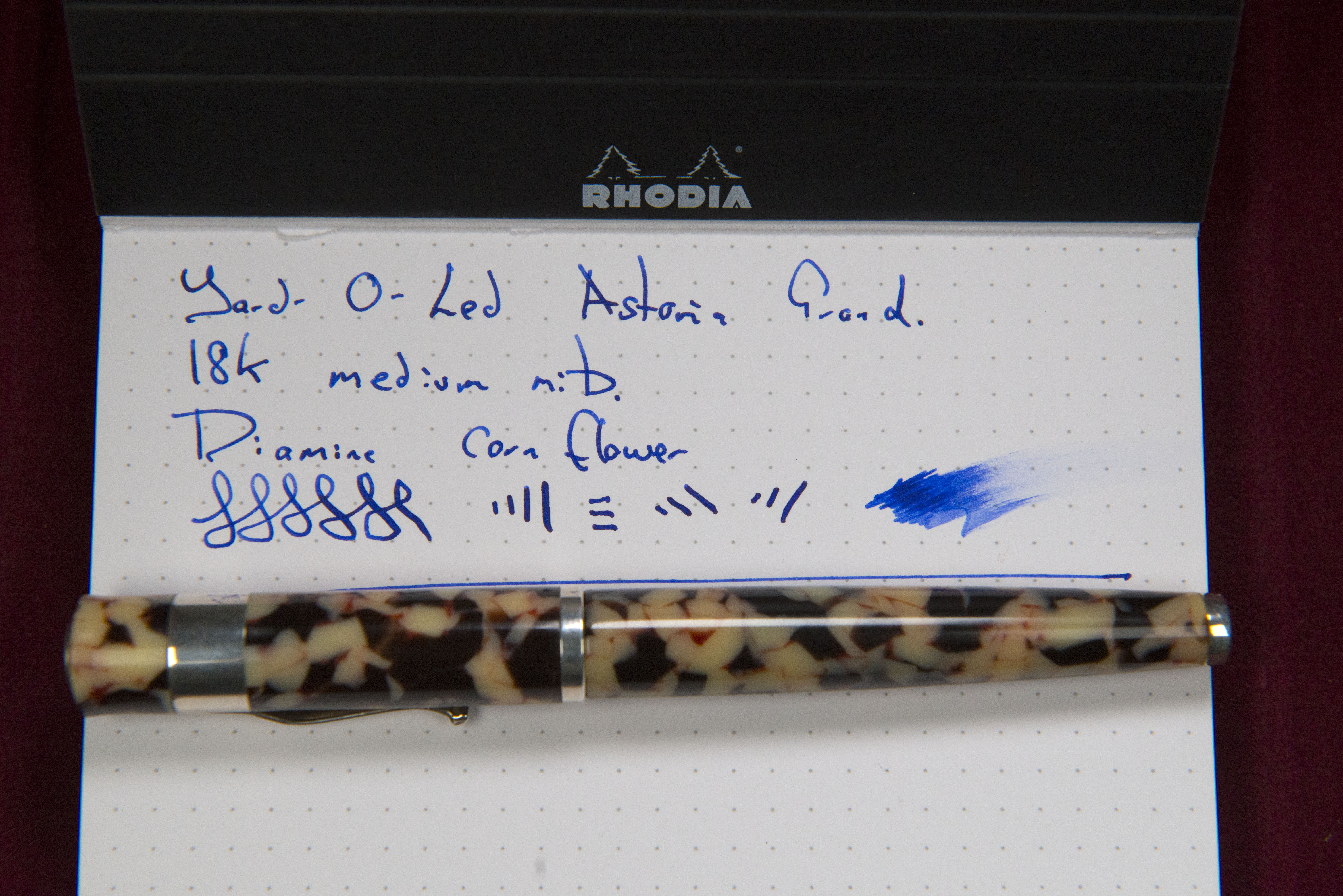