Here’s one to think about on a Friday.  How you decide what pens you use.  I was considering an update on my daily carry, except I realised there was no change from last time, which was back last November.  Personally, where things have changed is at my PC/desk, where the number of pens grows and shrinks depending on what’s new and if I’m reviewing something.

I’m quite bad when it comes to rotating pens.  I find myself entering the comfort zone and rarely looking to disturb the balance.  As a result my pens do suffer with being left hidden in drawers (sitting in pen trays before you worry too much).  Change tends to come when I get a new pen and decide it’s a user rather than an occasional, else when I look in my drawers and realise there’s something in there I need to or want to use.  I must admit I do have some ‘event’ pens – ones I use on specific occasions, and like so many others, should use more.

So with my pen case and travel journals retaining the same pens, what’s at my desk… 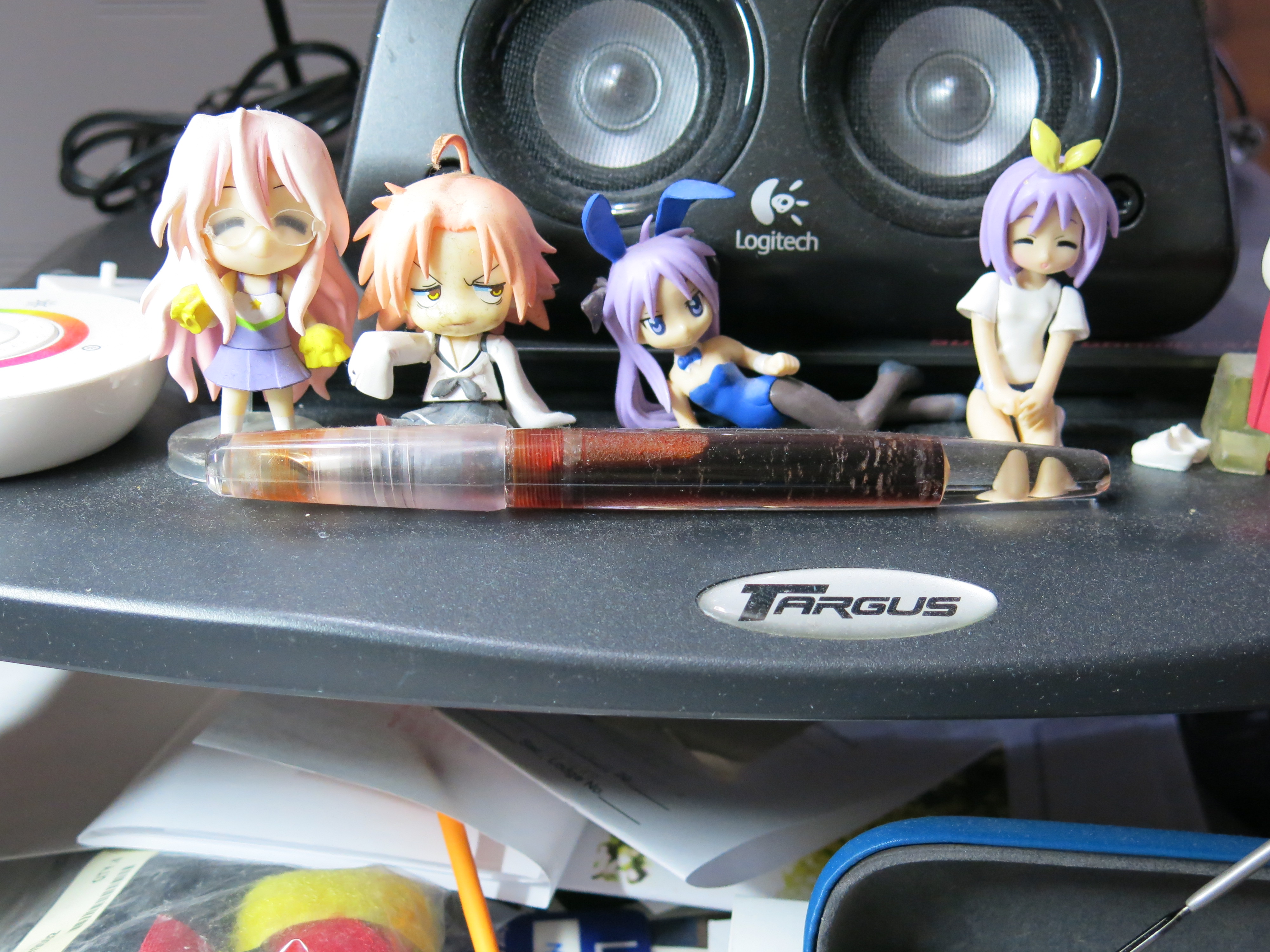 I never did manage to get a Konata figure, considering she is the otaku/geek collector in Lucky*Star.

This Franklin Christoph 66 Stablis, my first from that pen maker, was actually bought for use as a desk pen at my PC and has been there ever since. Sporting a fine SIG nib and presently loaded with Montblanc Lucky Orange (from a sample I was given). Much of the time it was loaded with J. Herbin Poussiere de Lune, which was only swapped out as I was using a second pen for a while (a FRI Bronze) which was loaded with Organic Studio Uranium and I needed a more contrasting colour. 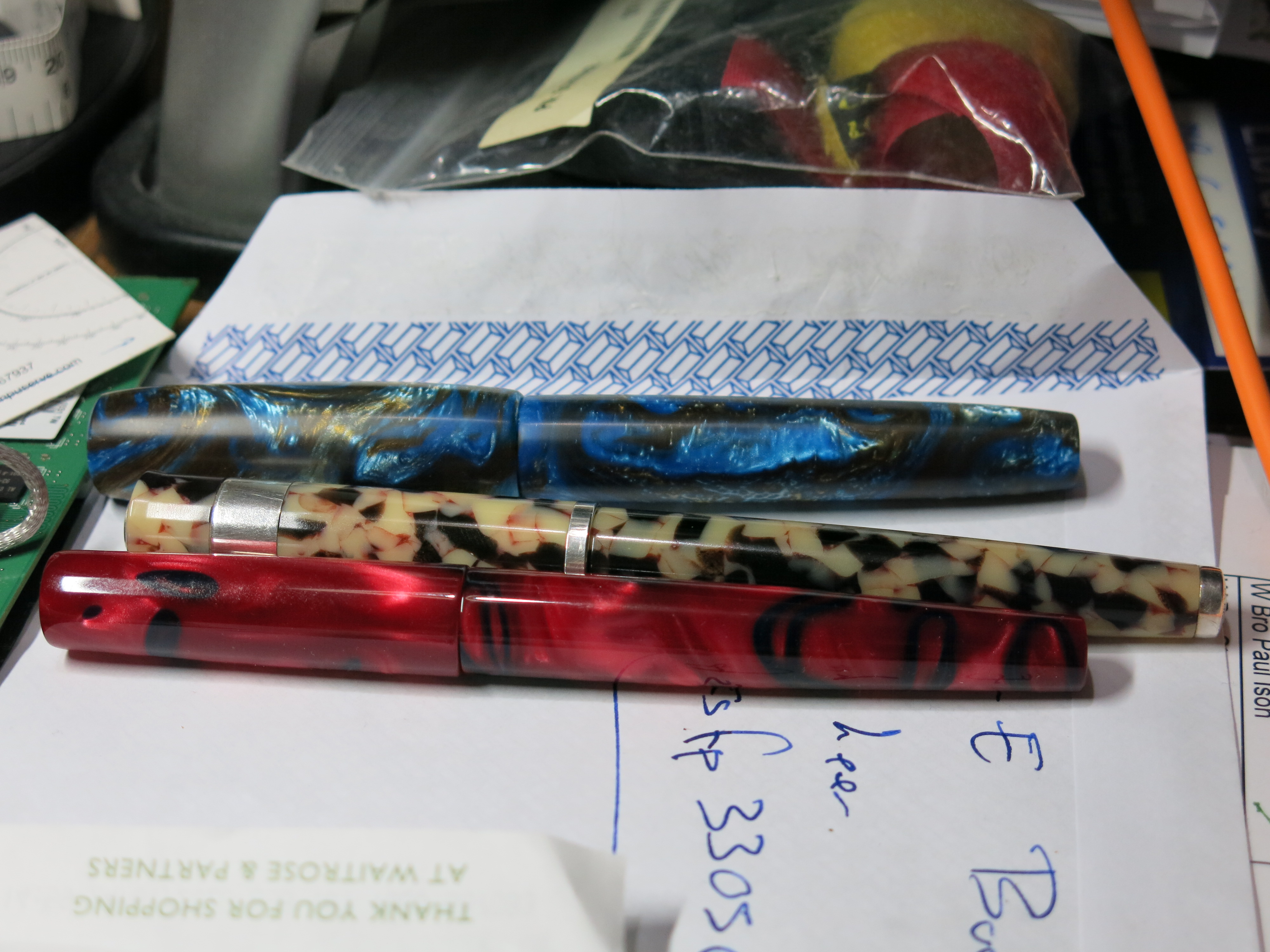 Also behind my keyboard I have two recently reviewed pens, but ones I’ve kept out to keep using – the Worcester Pen Company Serenity (bottom) loaded with Franklin Christoph Sweet Maroon and the Yard-O-Led Astroia Grand (middle) loaded with Diamine Cornflower.  The third pen I received mid December from Brian Chu at the Red Dragon Pen Company and is a broad nibbed Wyvern (his largest model) from a Blue Bronze Lava Lamp acrylic blank, and loaded with Krishna Inks Christmas Eve.

I also have a pen in my kitchen … 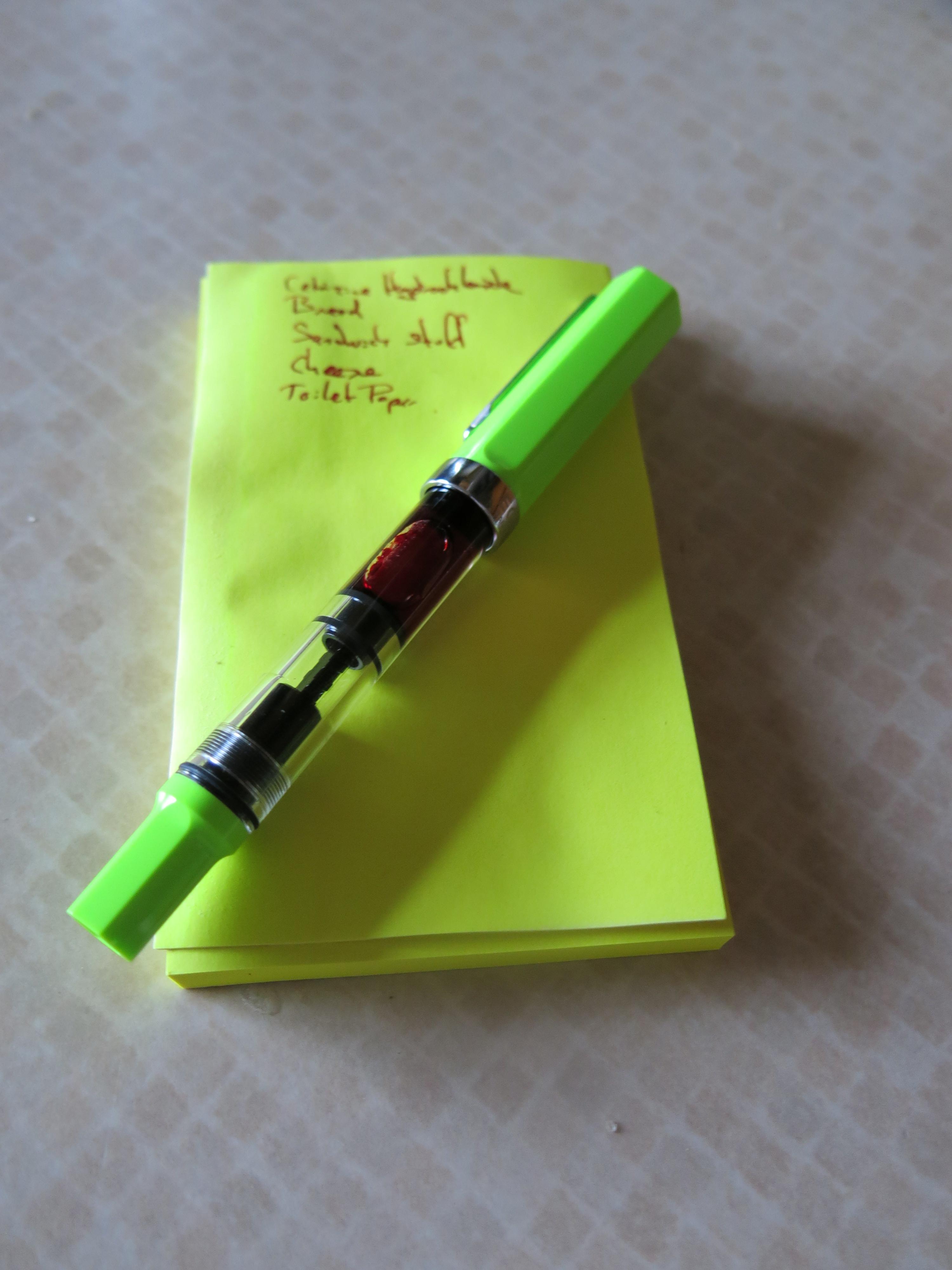 a trusty and robust TWSBI ECO loaded with the last of a sample of Diamine 150th Carnival.  This pen is used for note and lists in the kitchen and once empty is refilled with what ever sample I need to finish next.

So I could be considered guilty of not switching my pens around enough.  The question for my readers here, Facebook, and where this is linked/cross linked – are you as bad as me or do you rotate regularly.  What methods do you use for organising and allocating your pens?  I’m assuming that even with a few pens you can start hitting this problem, even if all are taken to work with you (I remember carrying 3/4 pens with me to work and still just using the one).

9 thoughts on “Pens in Rota – Do we use all our pens enough?”