Click, click, clickity, click …. if ever there was a fountain pen to distract the wielder and annoy colleagues it is Pilot’s Vanishing Point/Capless/Decimo (depending on country and width). Until very recently no other fountain pen had been on sale for a long time with a ballpoint type clicker mechanism. Sure it’s not the only retractable fountain pen out there, and even around the time of launch there were JDM rivals, but for single handed ease of use there has been nothing comparable until this month (February 2020) with Platinum’s launch of the Curidas.

First launched in 1964 there have been gradual changes over time, many special, limited and regular editions, plus two versions (ignoring the twist action Fermo), the Capless and the narrower Decimo.   Possibly due to the popularity with bloggers, the pen is best known by it’s US name, the Vanishing Point. 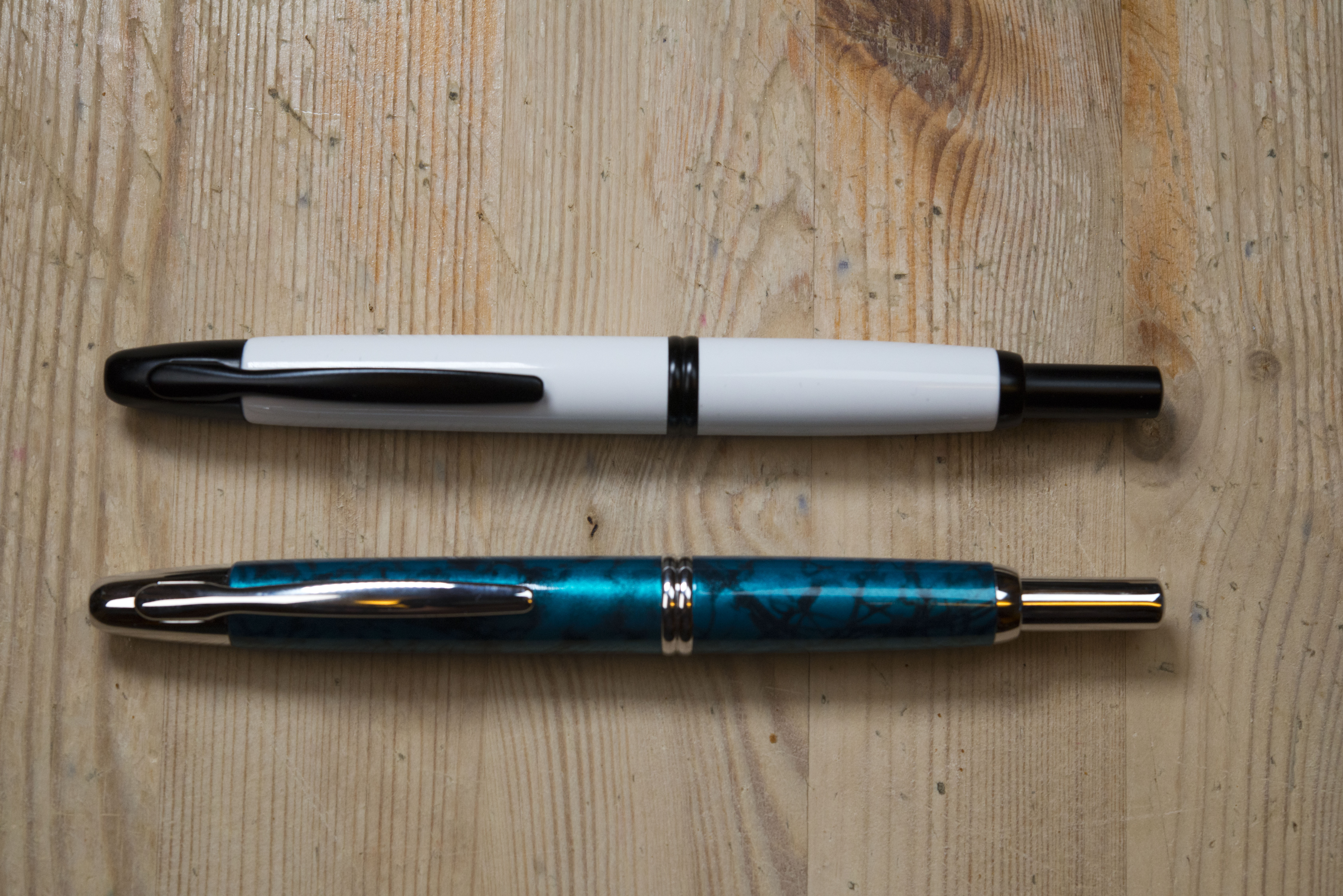 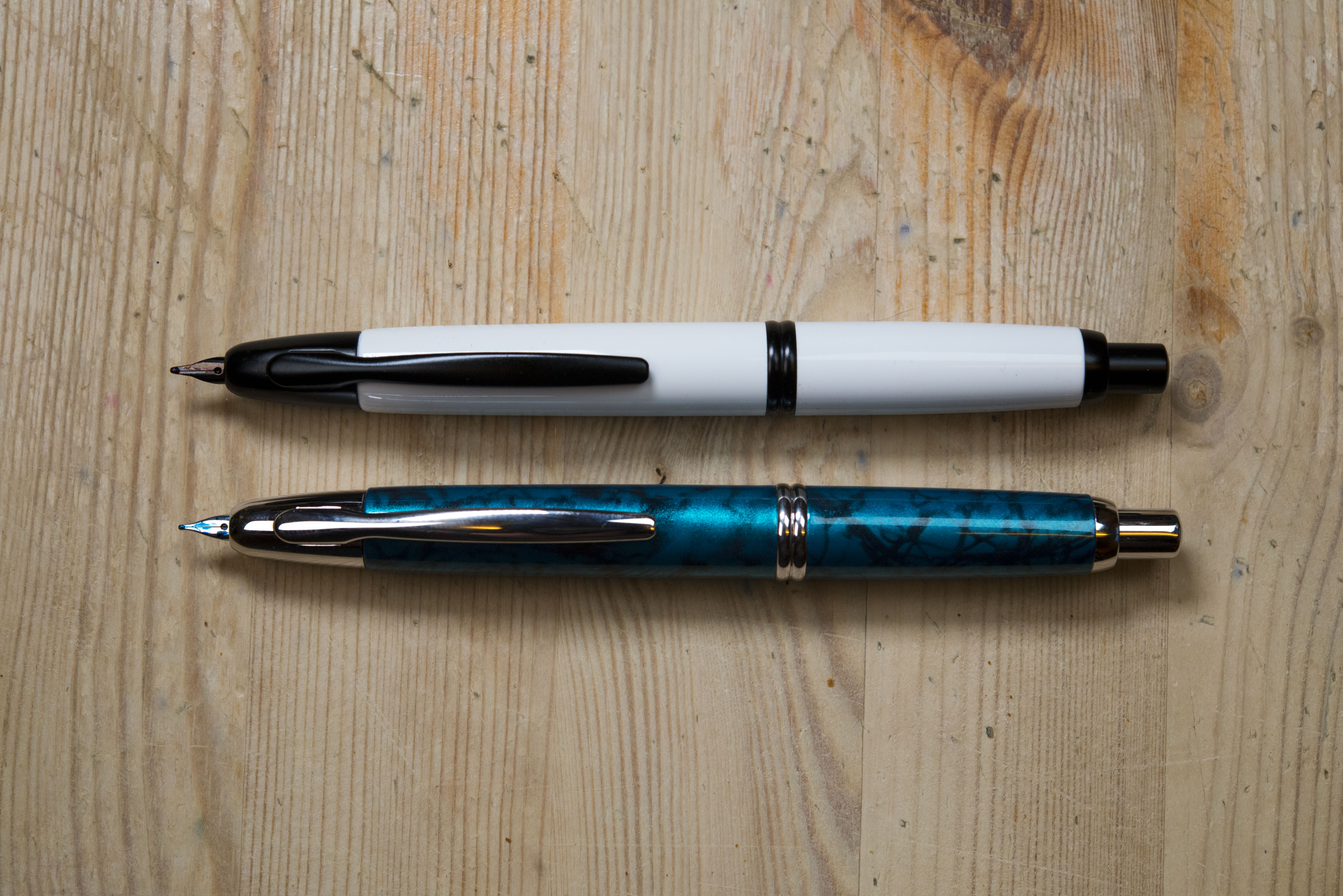 I have two, a white and matt black ‘Storm trooper’ from about three years back, and a Tropical Turquoise 2019 limited edition which I bought at last October’s London Pen Show.  The time gap between the two is coincidental but also significant as the older pen was from a period when they had a reputation for poor sealing with the result of pens drying out – mine could suffer the loss of a whole converter’s worth of ink in under a month.  Now this seems to have been fixed and my latest pen suffers none of these problems, plus you also no longer see complaints on forums about this issue. 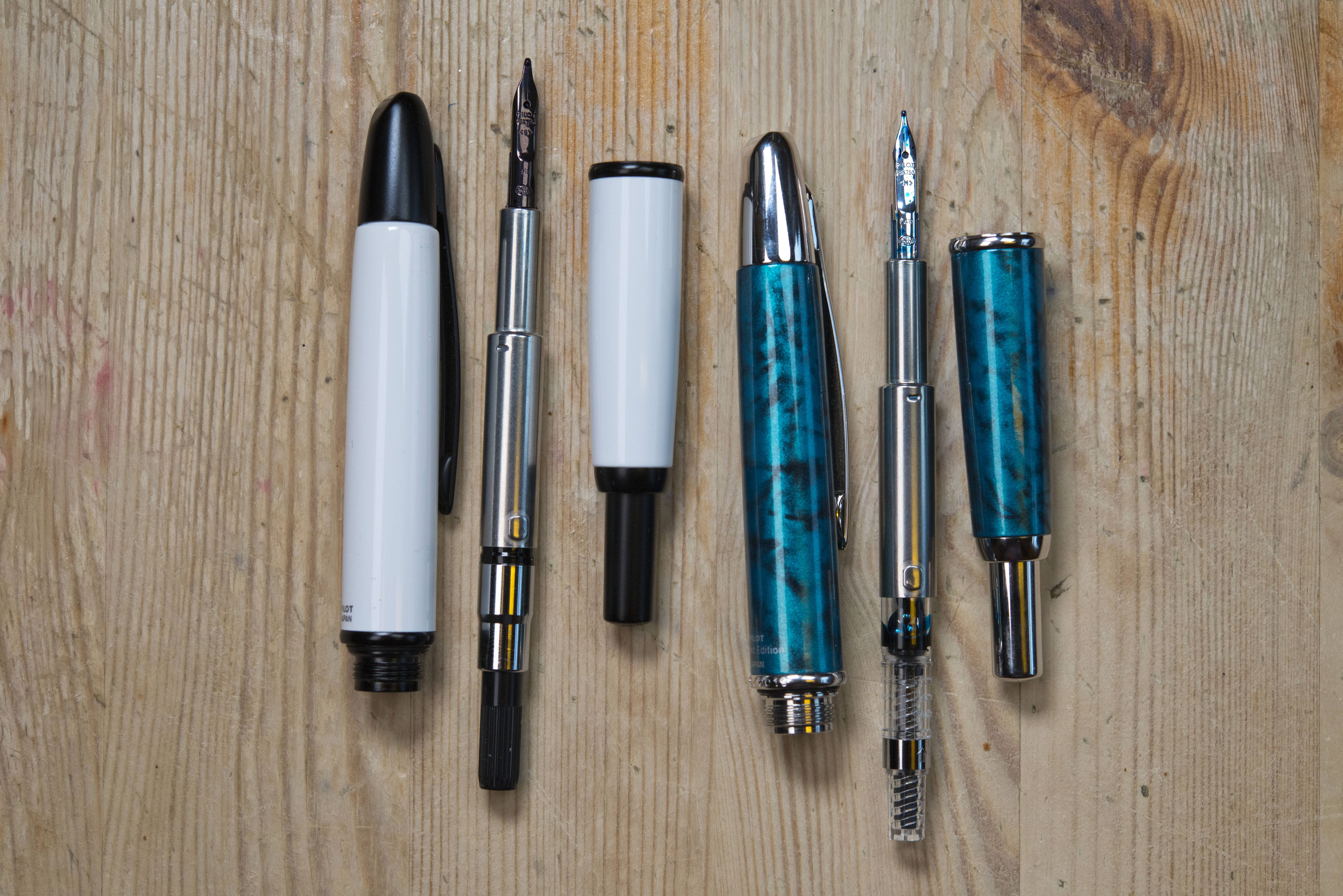 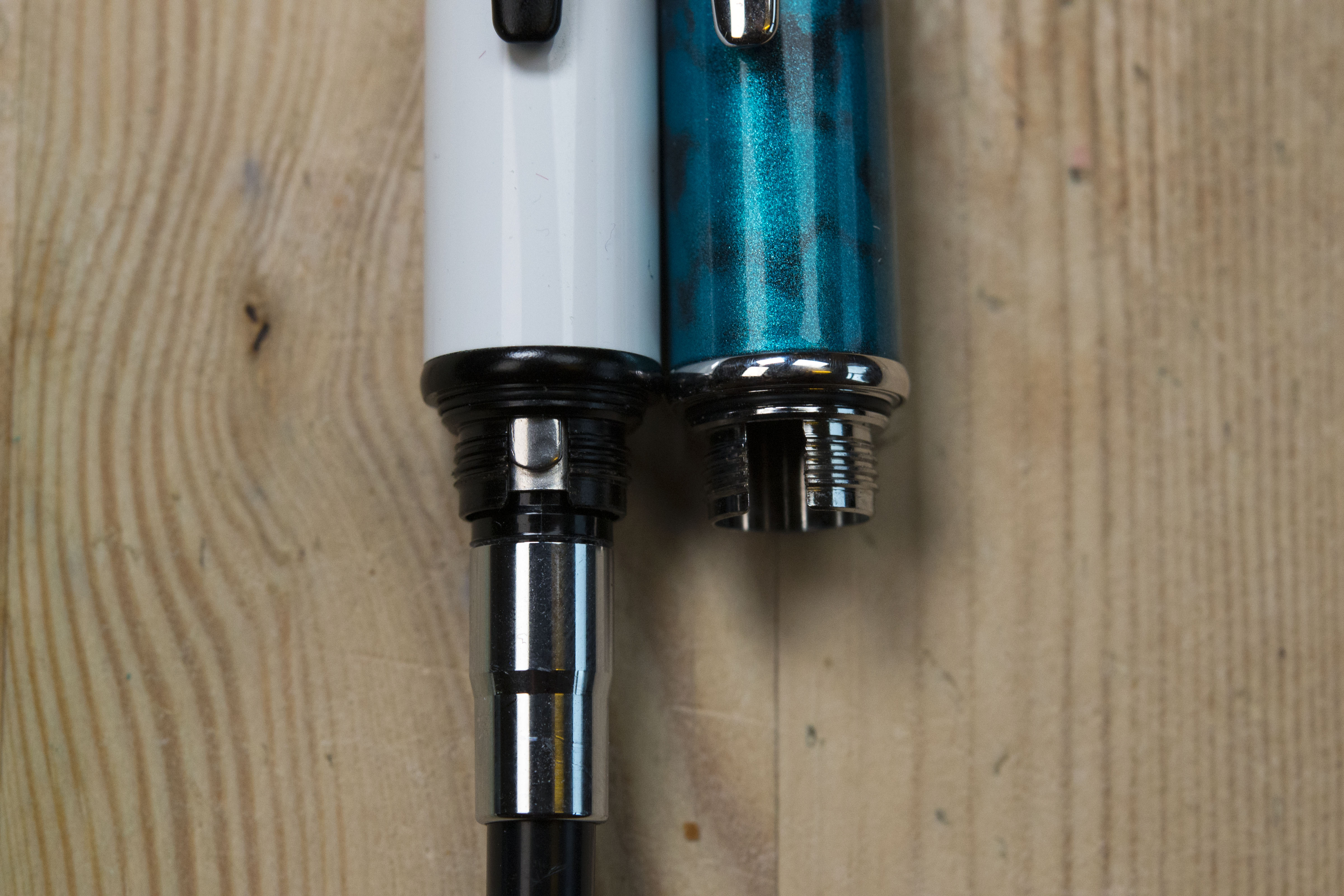 So for those of you new to this pen, here is its USP.  Rather than a fixed nib in a section and a cap to seal the pen, there is instead a removable unit containing both the nib and a converter or cartridge.  The fits in a spring hosted within the section, which has a hidden inner lid at the far end/opening.  There is a nock in the threads, meaning the nib will always be aligned to the correct position when refitting the unit.  The back half contains the button/clicker and the pen works like the majority of ballpoint pens out there.  The trick to stopping ink evaporation is the hidden lid which creates a seal and is pulled to the side by pressing the button, before the tip of the nib reaches the hole, thus helping it avoid contact.  Press the button again and the reverse happens.  A satisfying and repeatable experience which when repeated too often will make you really popular with those sat near you.  Or not as the case may more likely be.  Still it can make great stress relief. 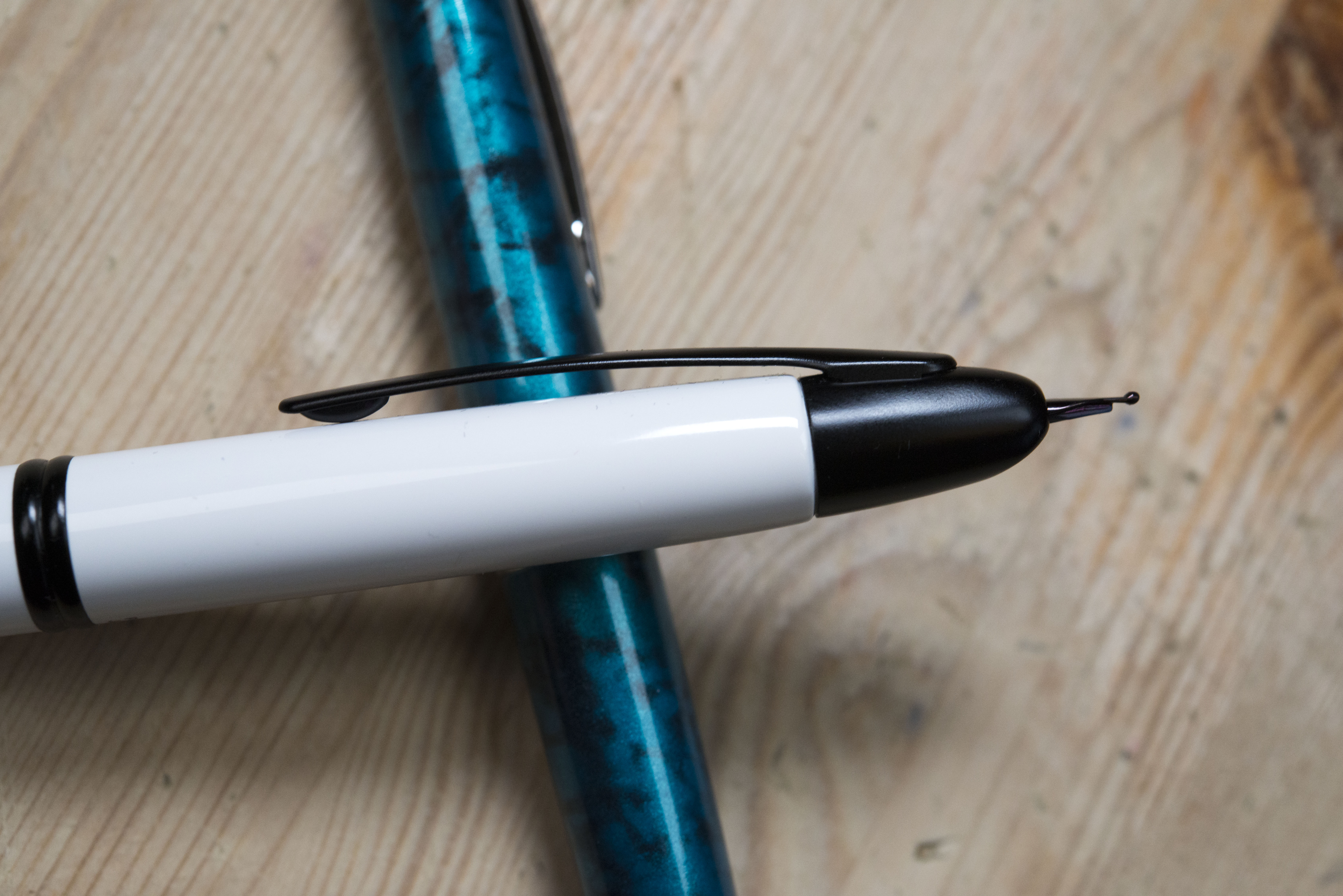 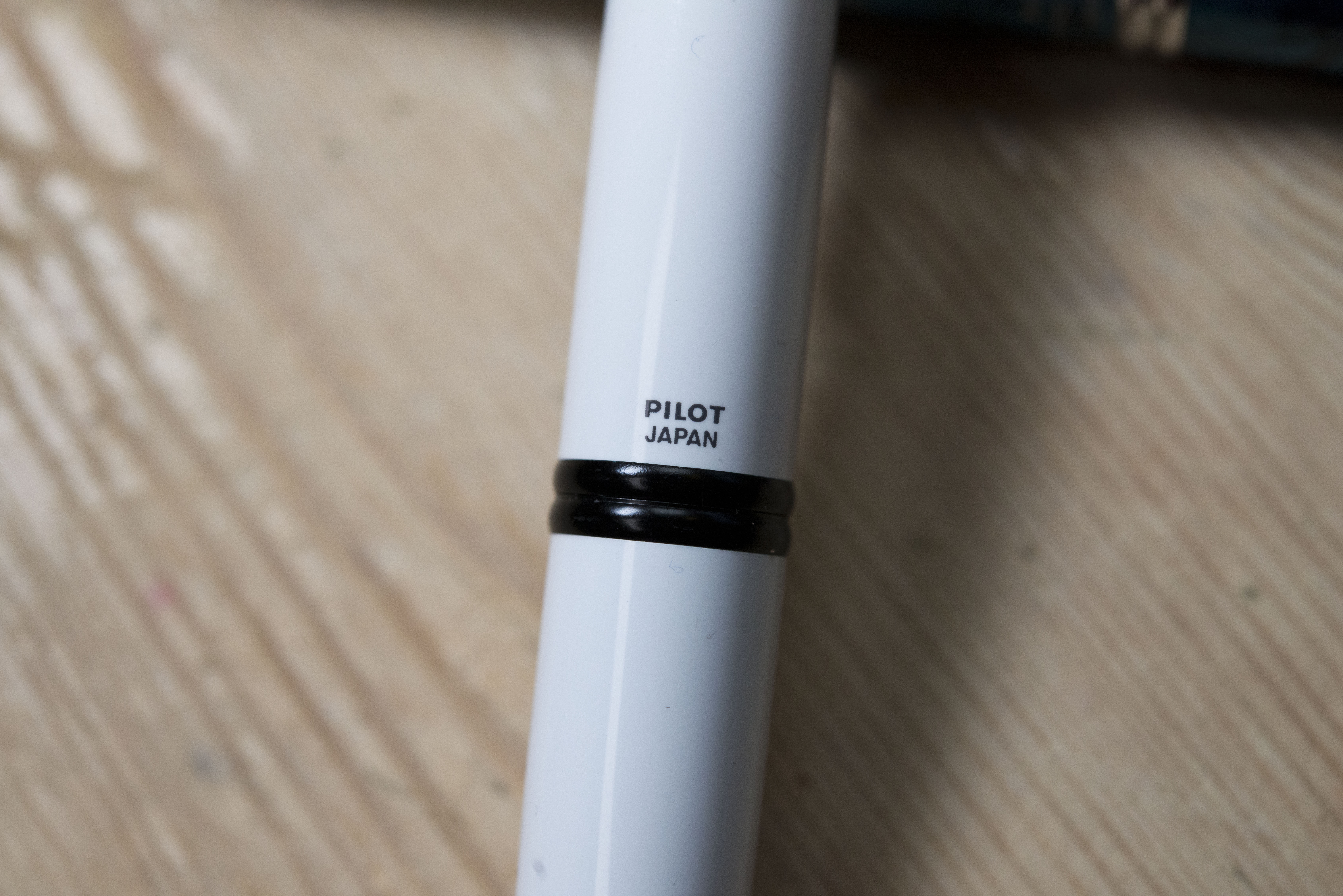 My first VP was the Storm Trooper.  I think this was actually the pen model where the Star Wars related term was first adopted for writing implements white bodies and black finishings.  In this case it was part of a range where the visible metal work, including the nib, were matt black and the body was a single bold colour.  It was an impulse buy, the last in stock and coming with a broad nib.  I had tried a few before at the London Fountain Pen Club so it was not a new experience to me, but it was a decision I still part regret.  Partly it was the writing experience due to the shape of the pen (which I will go into more later on) and partly the problems with ink evaporation, which I found at the time was a common issue. 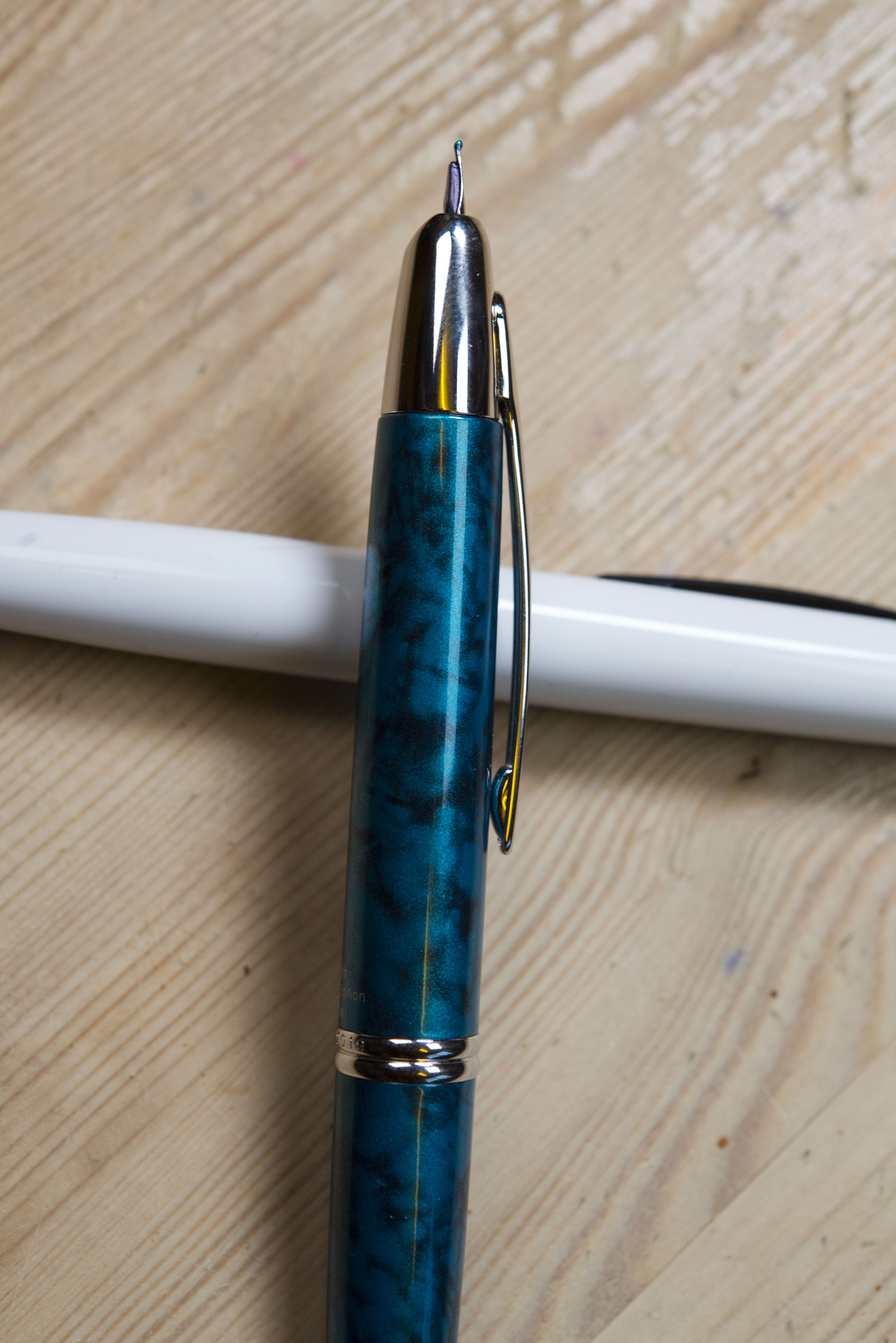 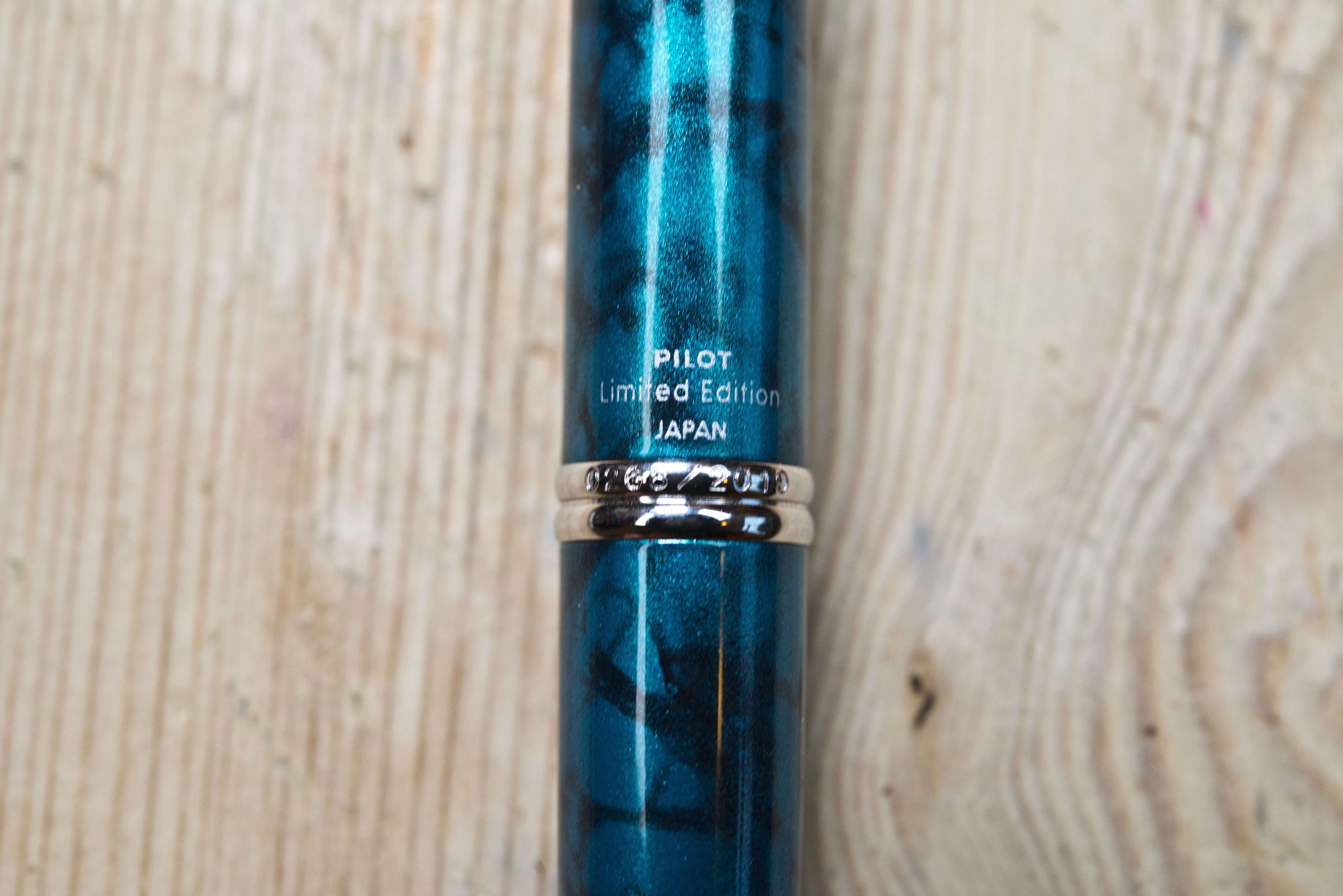 Since 1994, Pilot have released an annual limited edition.  These I generally ignored either due to not being aware of them, else because of my previous owning experience.  Mid last year the new release was announced, the Tropical Turquoise.  Something about it grabbed my attention but I also realised it was the sort of finish you needed to see in the flesh.  By this time I knew Pilot had solved their QC problems and so I decided to check it out at the October London Pen Show.  I asked one retailer to bring one along for me to look at, but was informed he was already sold out of his allocation.  Not a good start, however it turned out a few other vendors were selling them on the day and Cruzalt Pens were doing a very good deal.  While I find the rhodium finish bright work to be a bit ‘bling’ for my tastes, the pen as a whole worked well for me and so I bought one with a medium nib, forgetting that on the VP nibs produce line widths closer to European than Japanese stated sizes.

Some readers may wonder why I bought another one if the shape made for an unpleasant experience with the first.  It is actually down to usage.  The pen is relatively thin and does taper in towards the end.  The net result was I found even short to medium periods of writing to be uncomfortable, however for note taking it was fine.  The VP makes a great every day carry (EDC) implement, but for me I ideally need a European sized fine nib, especially as it would be used with a Midori Passport Traveller, where the paper is slightly smaller than A6 in size.  A broad nib would just be too large, hence my Storm Trooper remaining largely unused. 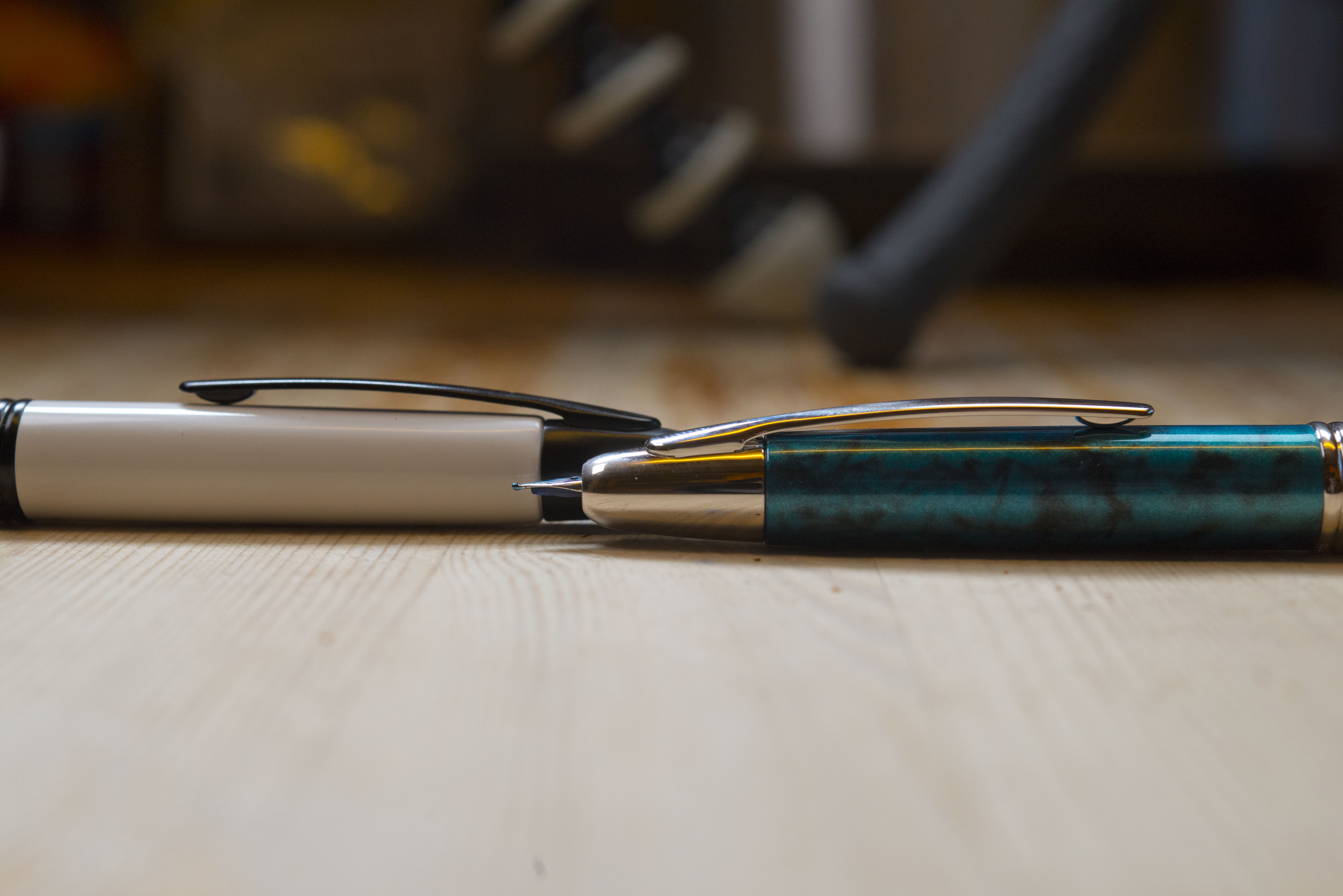 How comfortable others will find the pen is dependant on a number of things.  I’m not alone in finding the shape awkward to hold for periods of time, but also the clip can be intrusive as it is fixed in place (unlike on the Lamy Dialog 3 where it is pulled to the surface of the pen when the nib is opened).  Anyone who crosses a finger over the top of a pen will find the clip gets in the way.  The vanishing point really is just for those of us who use the classical tripod grip.  I’d be interested to know if it also proves an issue for left handed people. 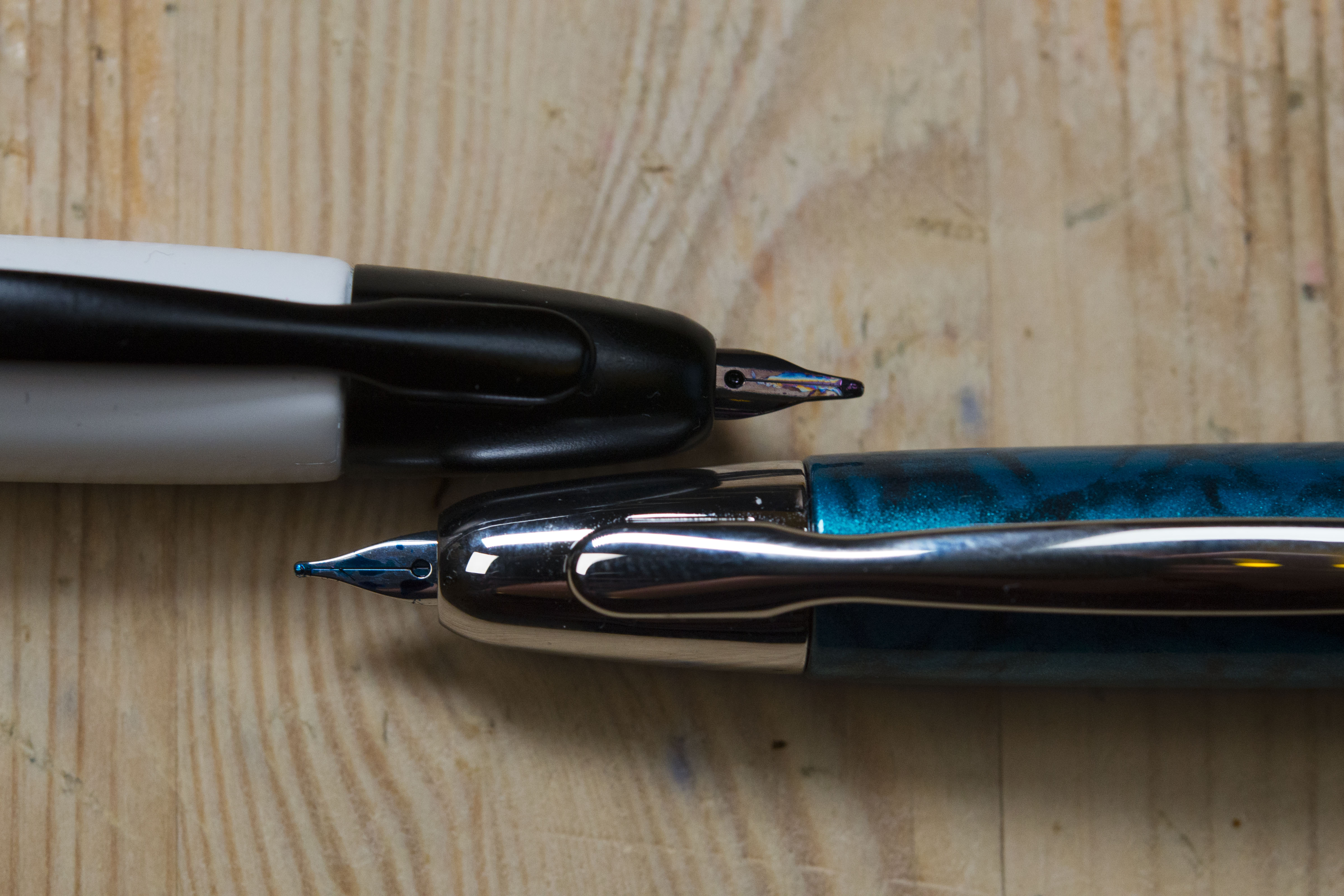 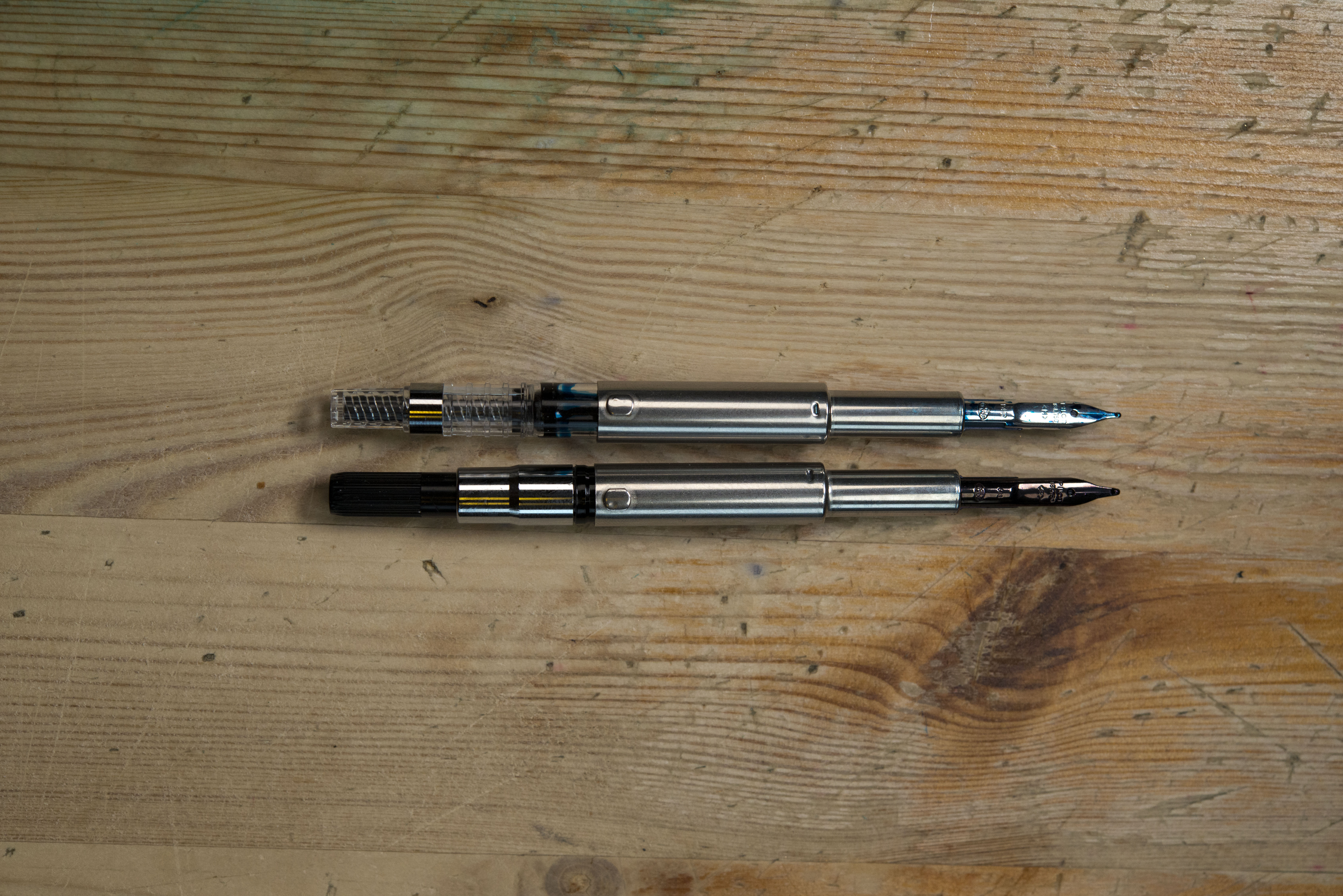 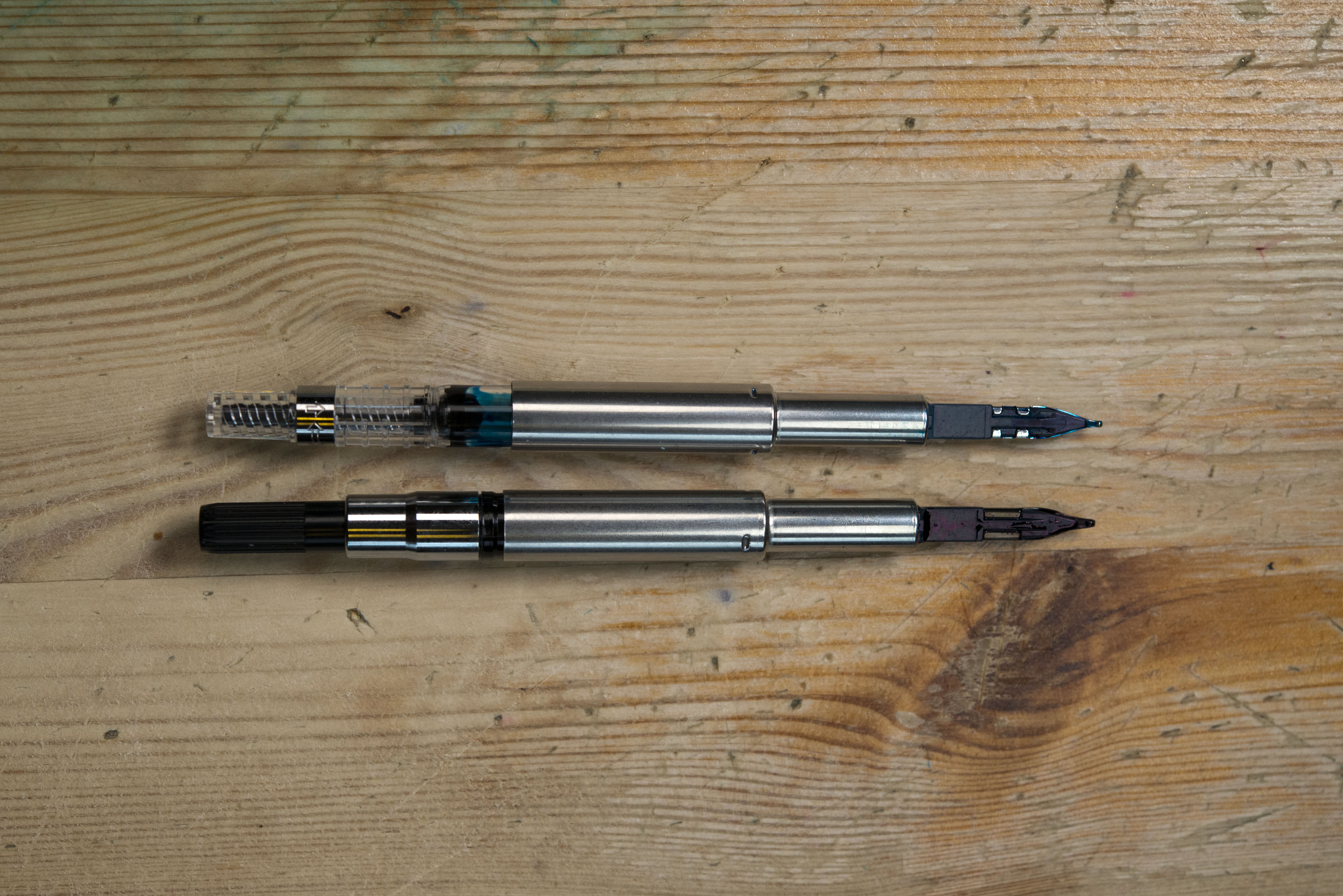 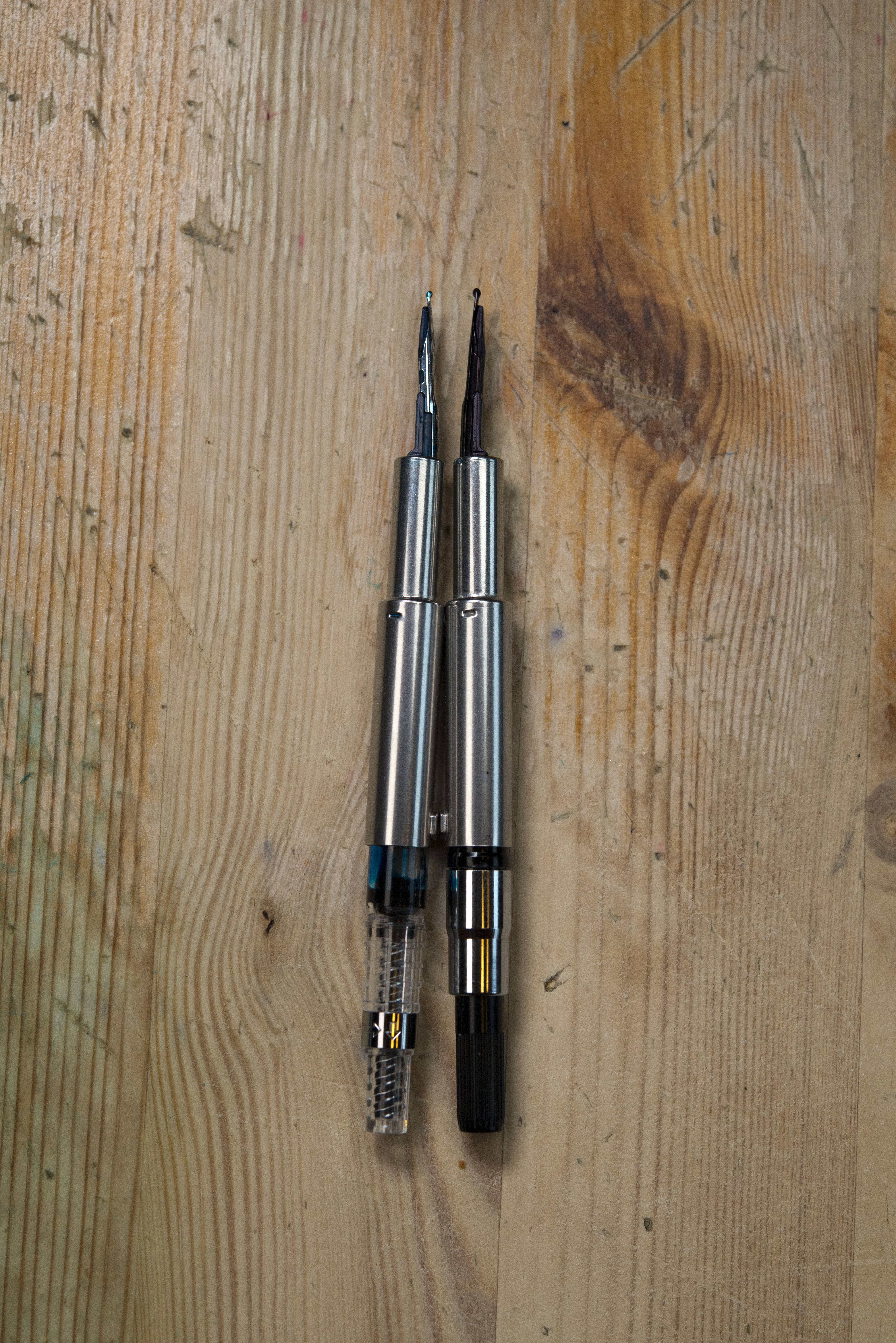 Now if the pen is comfortable in your hand then the writing experience is great.  The nibs are European in line width size and due to their unusual long thin shape are soft and springy (though not in the tines, so don’t expect great variation).  Pilot nibs are also buttery smooth and wet.  I do regret not getting a fine nib for my Tropical Turquoise, but as this is the standard rhodium trimmed version, not the black, I could pick up a fine spare/replacement nib unit further down the line, though prices do seem to have risen to around the £100 mark.

Note outside of Japan the Vanishing Point is only available with 14k gold nibs.  There is a lower priced JDM range that has a ‘special alloy’ nib – basically steel.

The filling mechanism is Pilot proprietary cartridge or converter.  The older ones came with the Con-20 converter fitted as standard (metal body with press bar on one side), newer ones come with the Con-40, which I have no problems with though I know some people do not like them.  Regardless they do not have the greatest of ink capacity.  Included with the pen is a metal cap.  This is to be placed over the end of a cartridge, if you’re using one instead of a converter, else there is a risk that the plastic may be deformed and/or cracked by the button mechanism when clicking the pen open and closed.  You will note my Storm Trooper uses a Con-50 converter – this is because the original Con-20 failed on me.  Note also the Pilot Con-70 converter is too large for this pen. 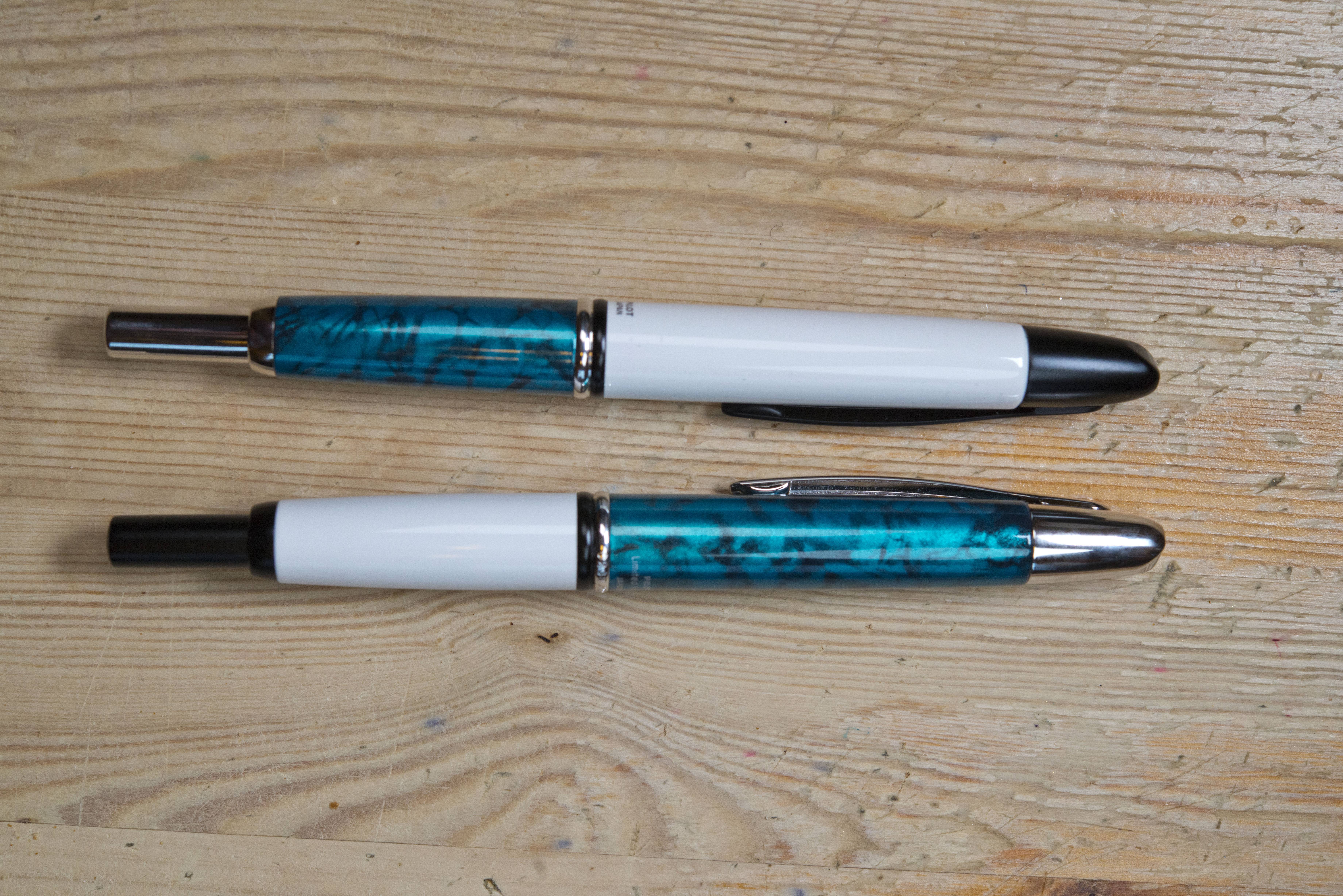 So what do I think.  The Vanishing Point is certainly a popular pen, but it is also very marmite as well.  As previously mentioned I am far from alone in finding the pen uncomfortable to use for a periods of writing (as opposed to quick note taking), but at the same time there are plenty of people out there who really enjoy using them.  There is  as a reasonable number of people who collect them.  It  must be remembered these aren’t £20-25 Lamy Safaris or £27-30 TWSBI ECOs, but rather cost around £175-200 each, more for the limited editions, and a lot more for the rare raden models.  The interesting thing is you see surprisingly few for sale on the second hand channels.  Perhaps people keep them just to go click, click, clickity, click …. 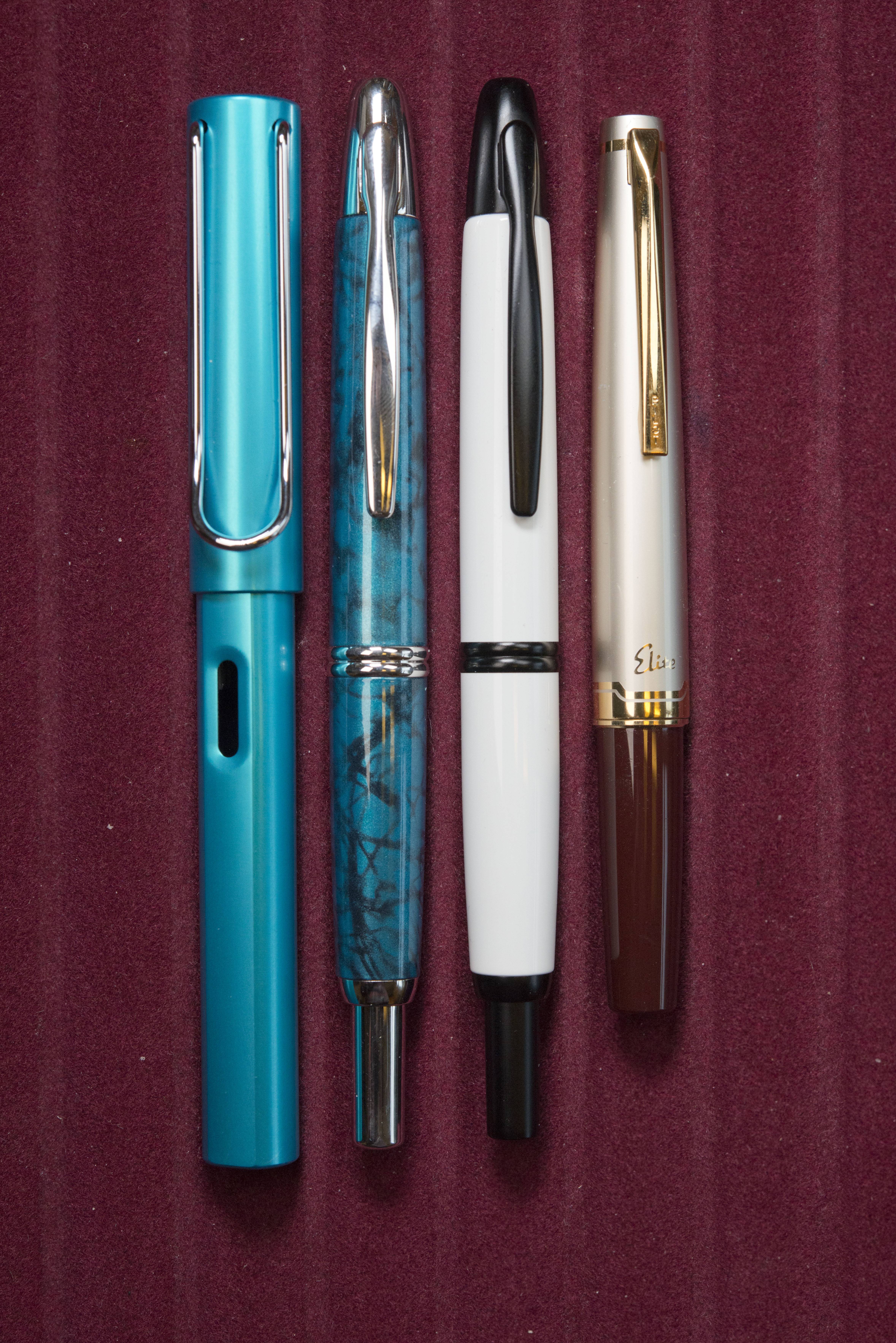 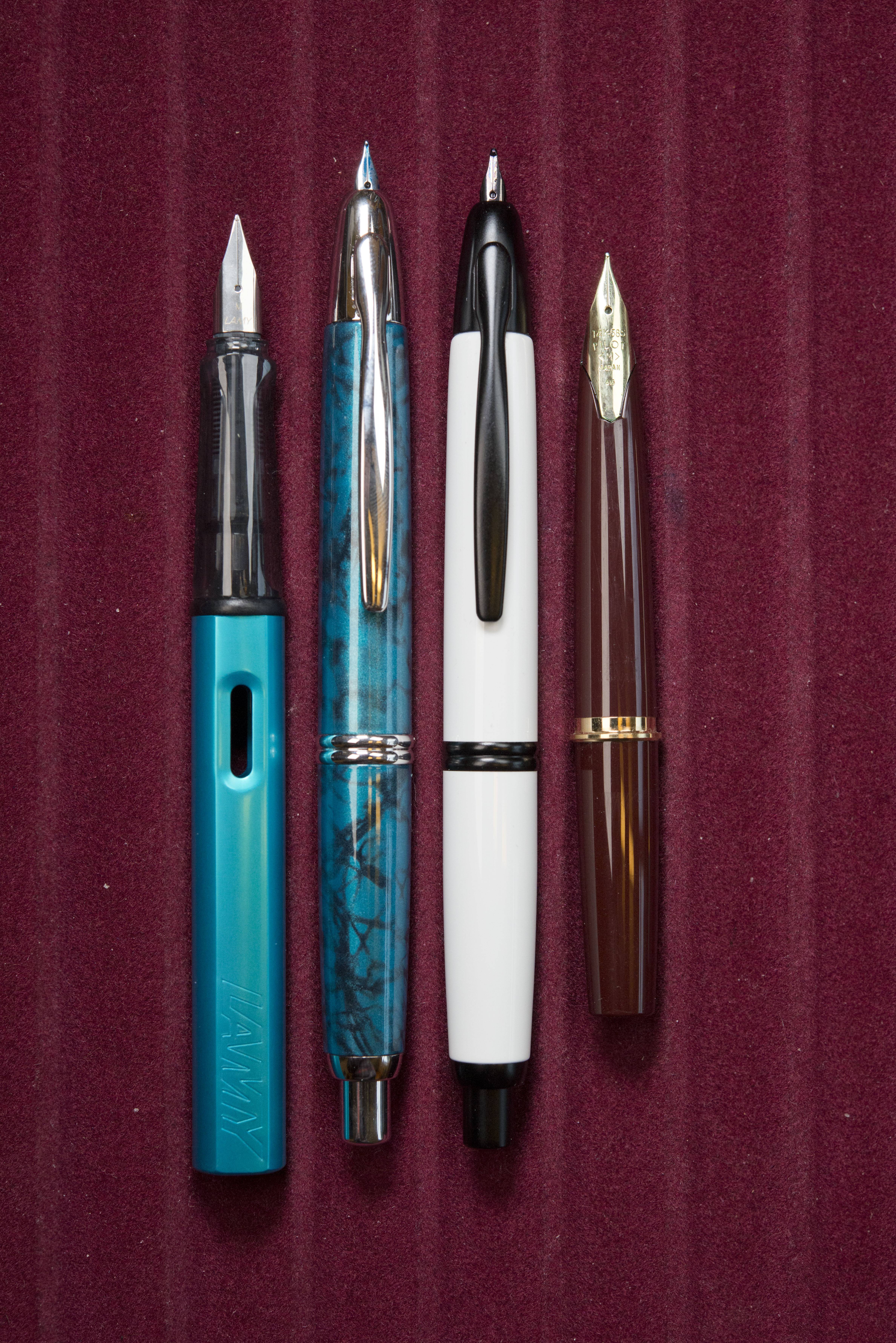 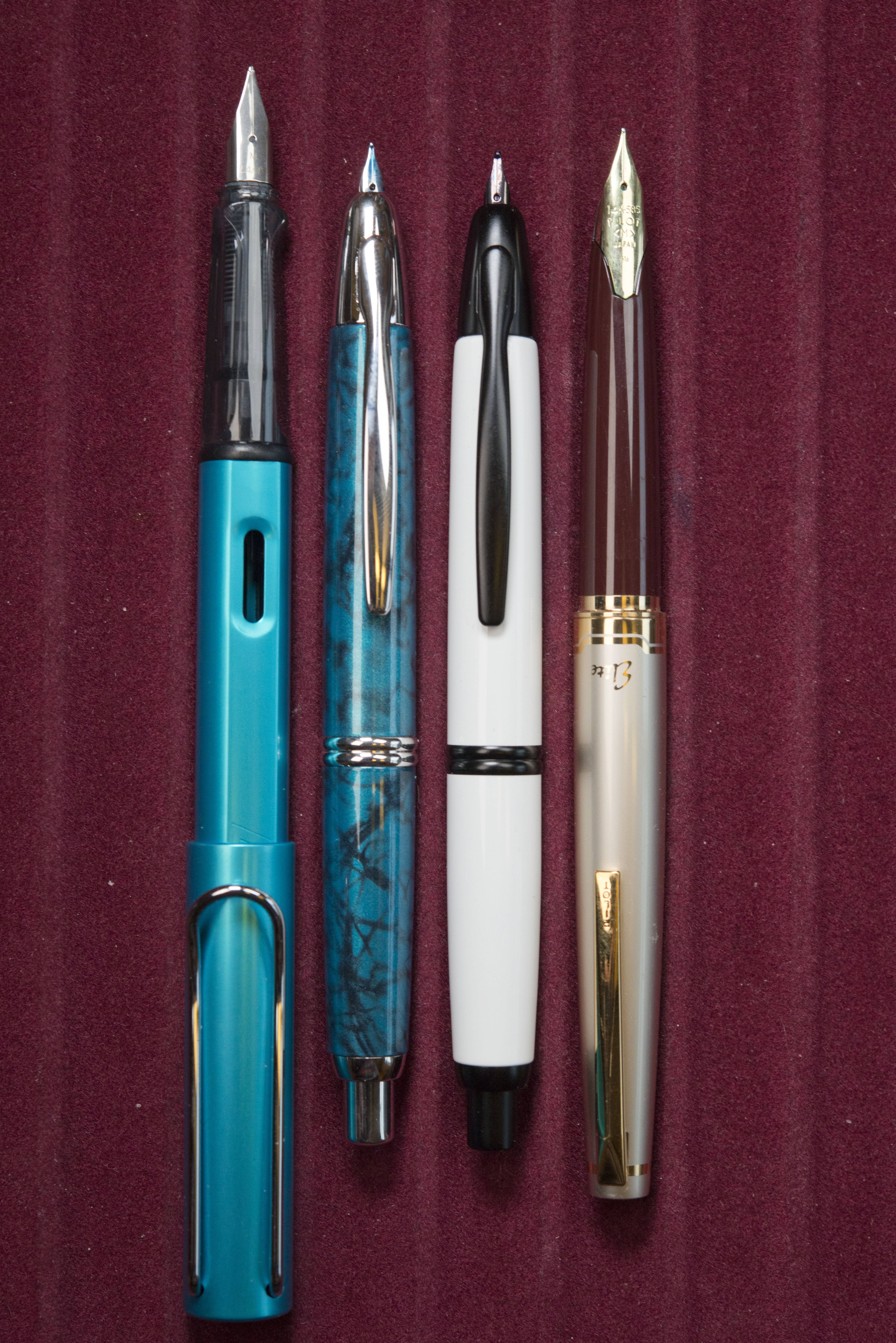 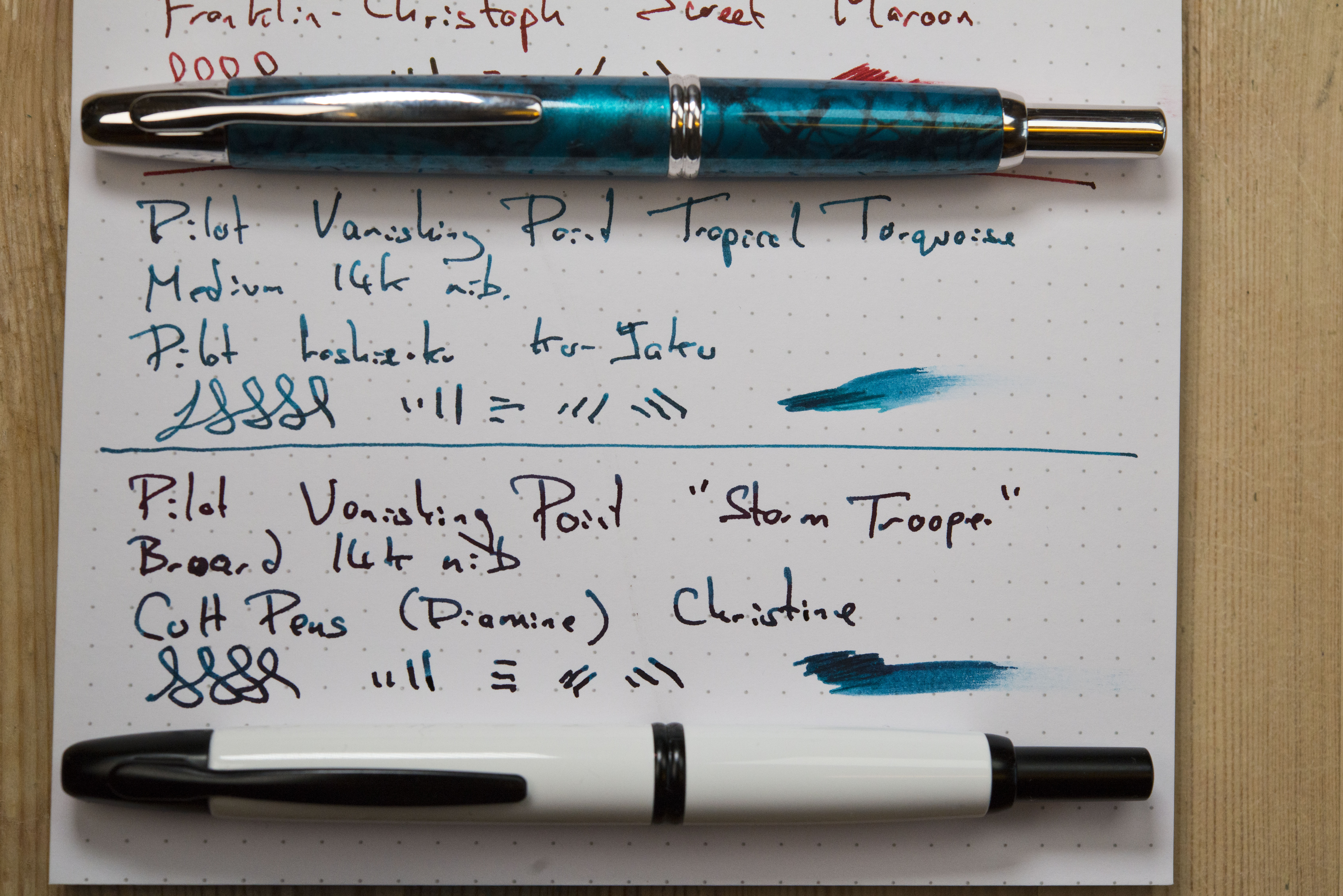