Flagship of the Pilot fountain pen range and a comparative behemoth in size, the Custom Urushi has shown that simplicity and cleanliness of design can be as appealing as complicated art works.  Available primarily in black, it is also made in smaller numbers with a vermilion finish to the cap and barrel.  For a long time it was only available in Japan and the USA, however as of recent it can now be bought from an increasing number of European and UK based retailers. 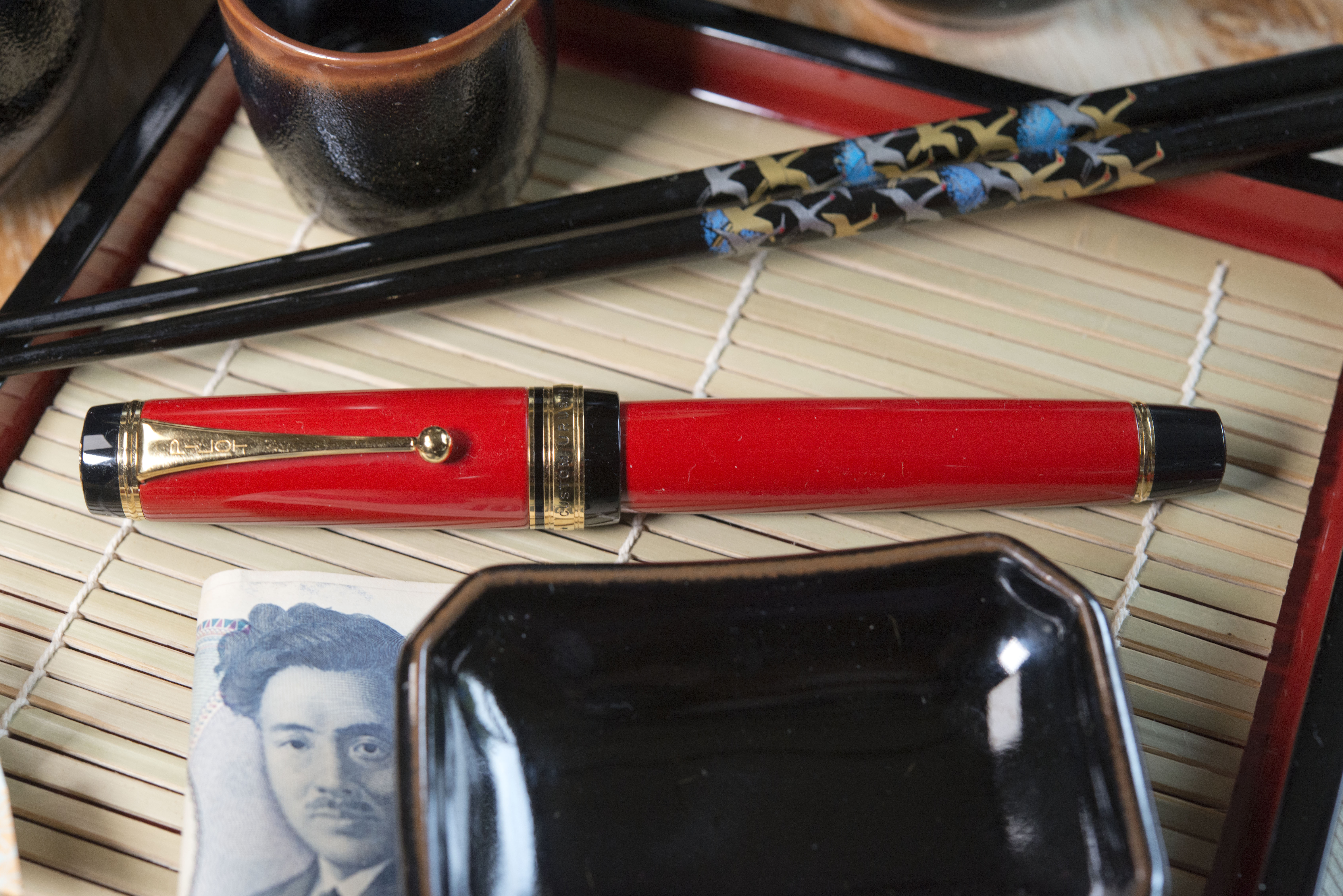 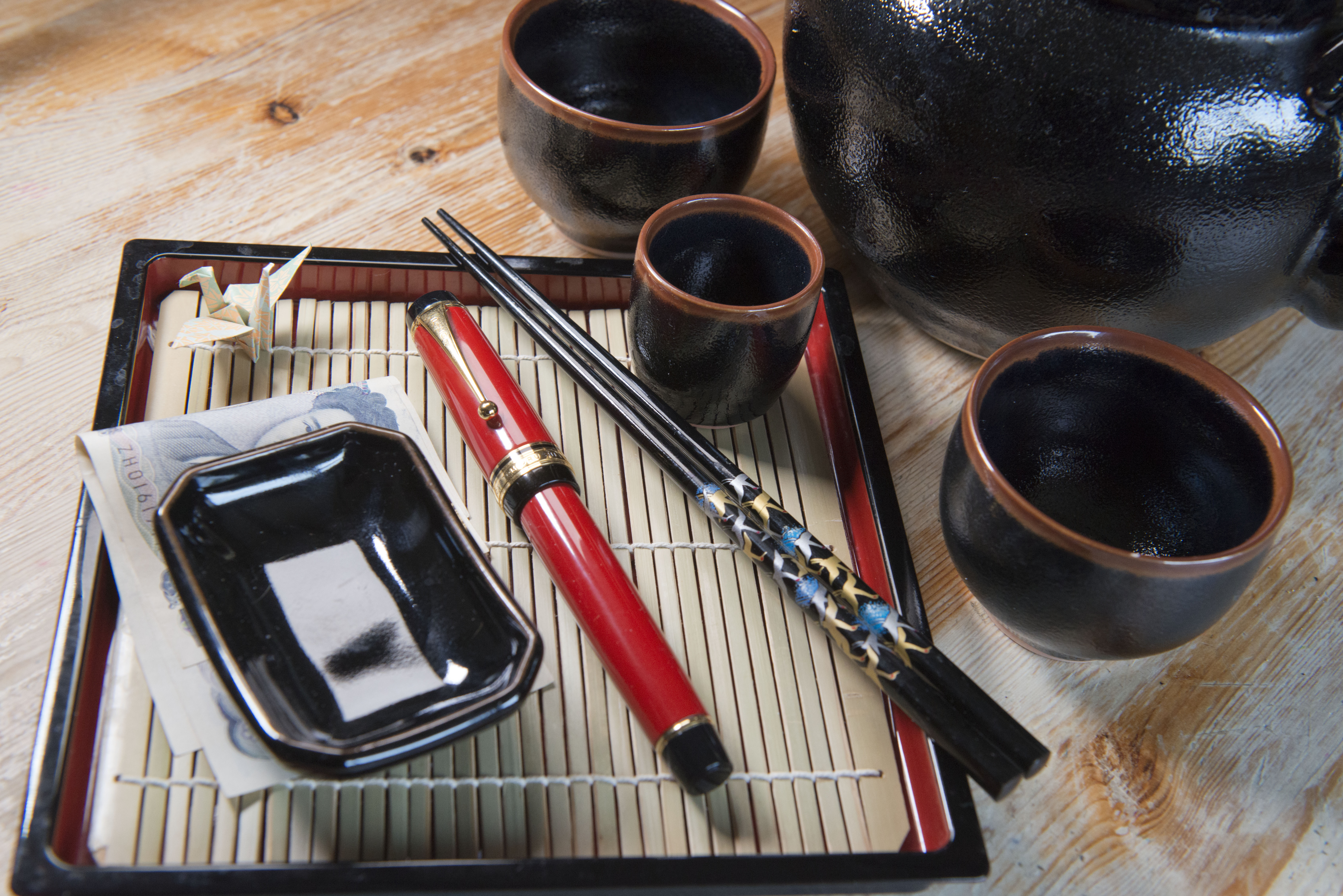 It is hard to judge just how big the Custom Urushi is when sitting by itself.  The proportions are spot on.  Only the ball at the end of the clip and the width of the various rings are the same size as on other Pilot and Namiki pens, but these are of such a nature that you would never tell this is a very large fountain pen.  Arguably even the width difference between the cap and barrel is proportional to smaller pens such as the 845 and 823. 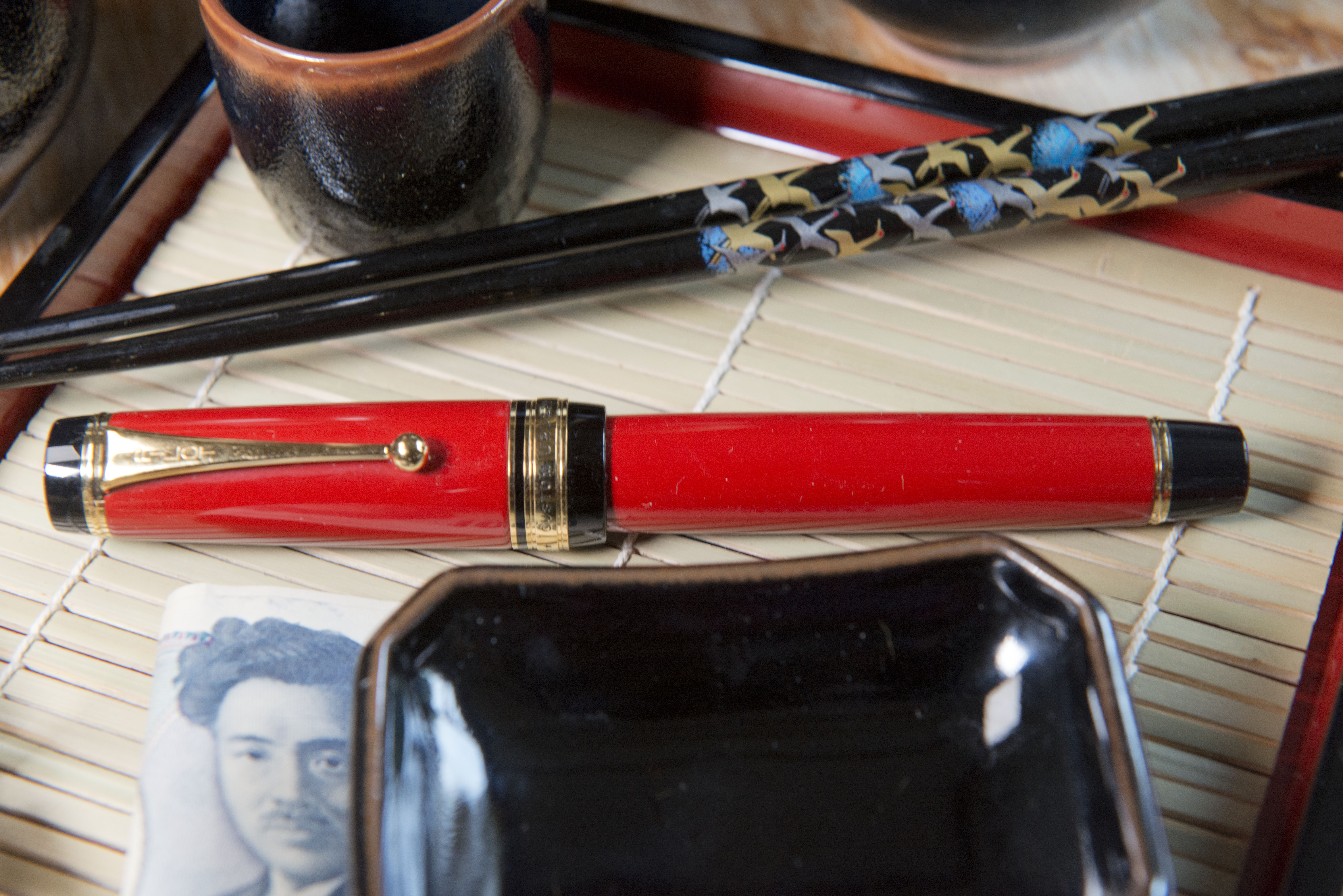 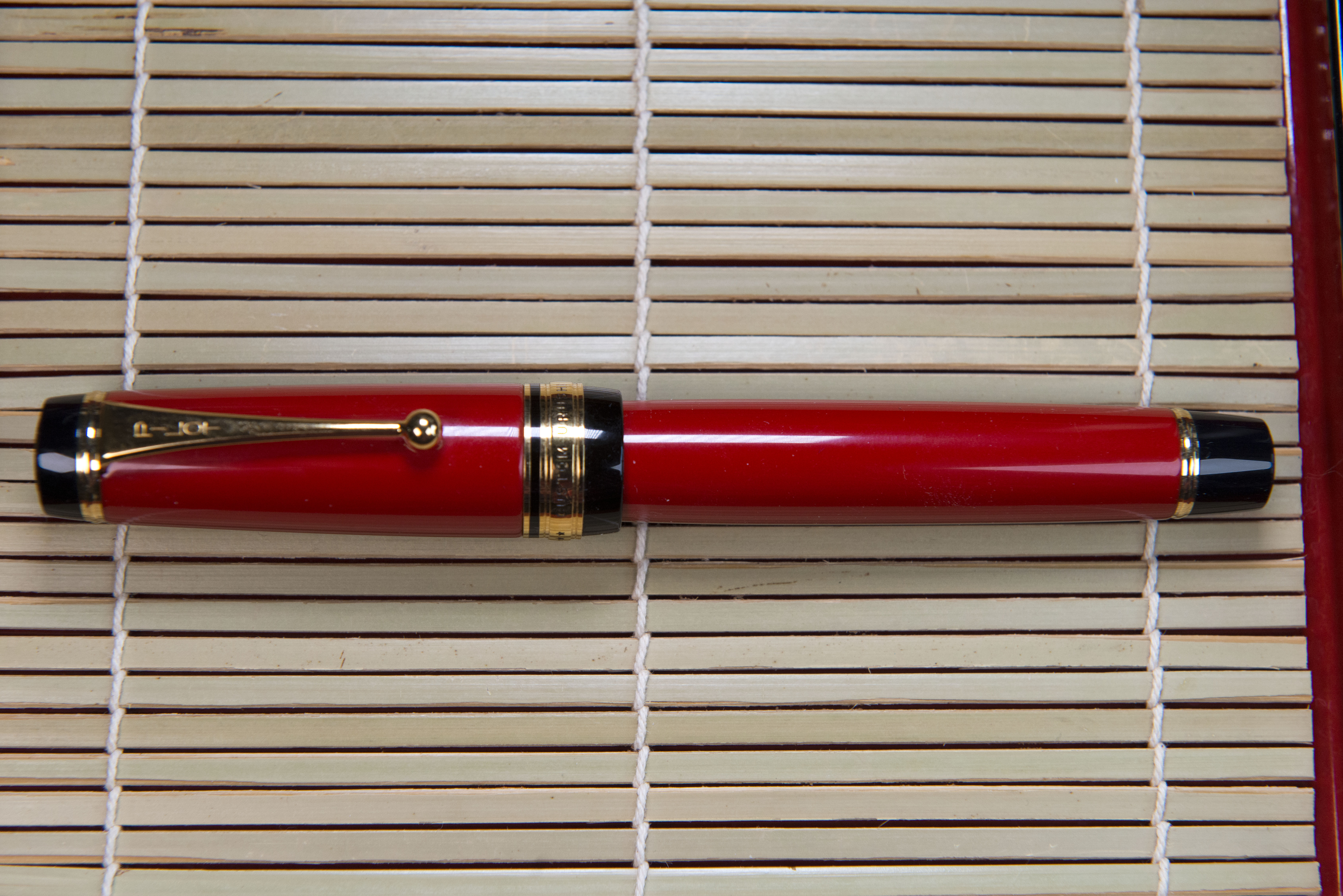 Design wise, it is a classical shape with chopped off ends.  This vermilion version however differs from the black in the way the colour works to differentiate it from the rest.  The large black finials as well as the black base/opening to the cap (which also makes up the inner cap) help accentuate the urushi lacquer work.  The gold bands are the stock differentiator for pilot, enabling them to separate their pens from the rest of the pack, and here their increased size helps keep the proportions consistent.  This is the sort of classic colour combination you would expect from the royal courts in ancient China or Shinto and Buddhist temples in Japan.

It takes two turns to remove the cap during which time you are given another reminder of the size.  Considering the core of the cap and barrel is made of urushi lacquer over ebonite, the cap and body still have heft.  This partly because the finials, nib section and inner cap are made from a black resin, and partly due to the gold coloured metal work, which as previously mentioned, has been scaled up to keep the proportions pleasing to the eye. 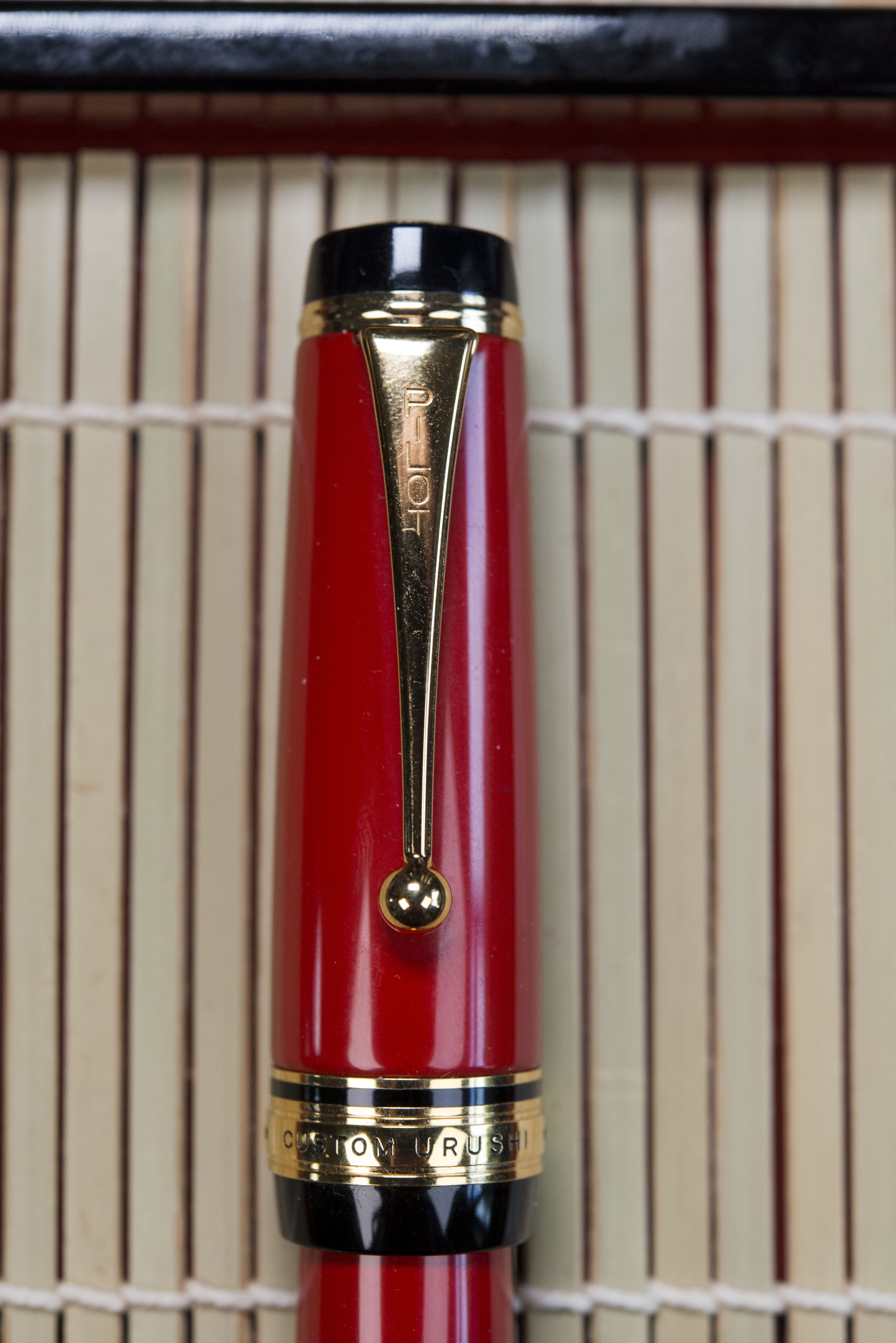 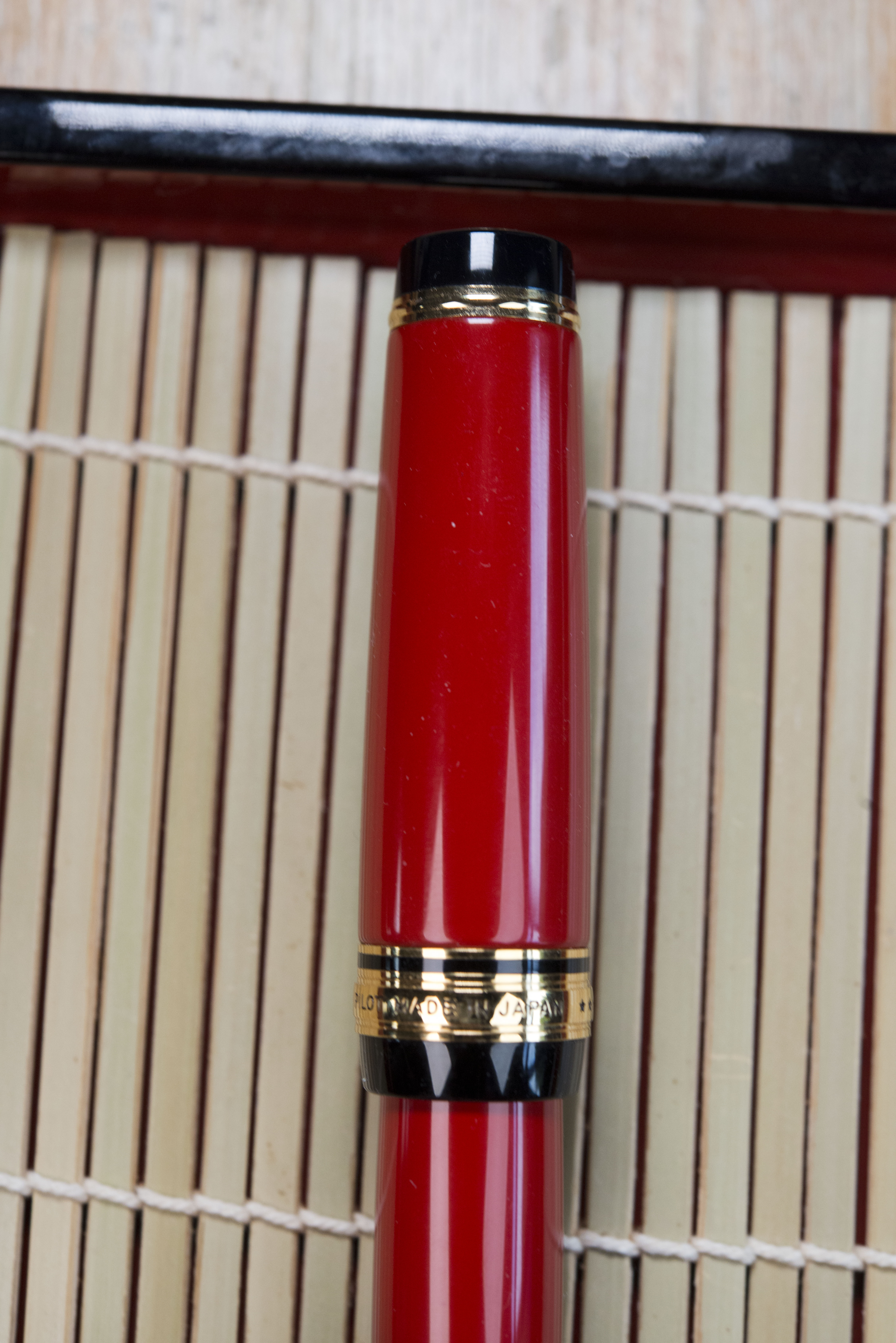 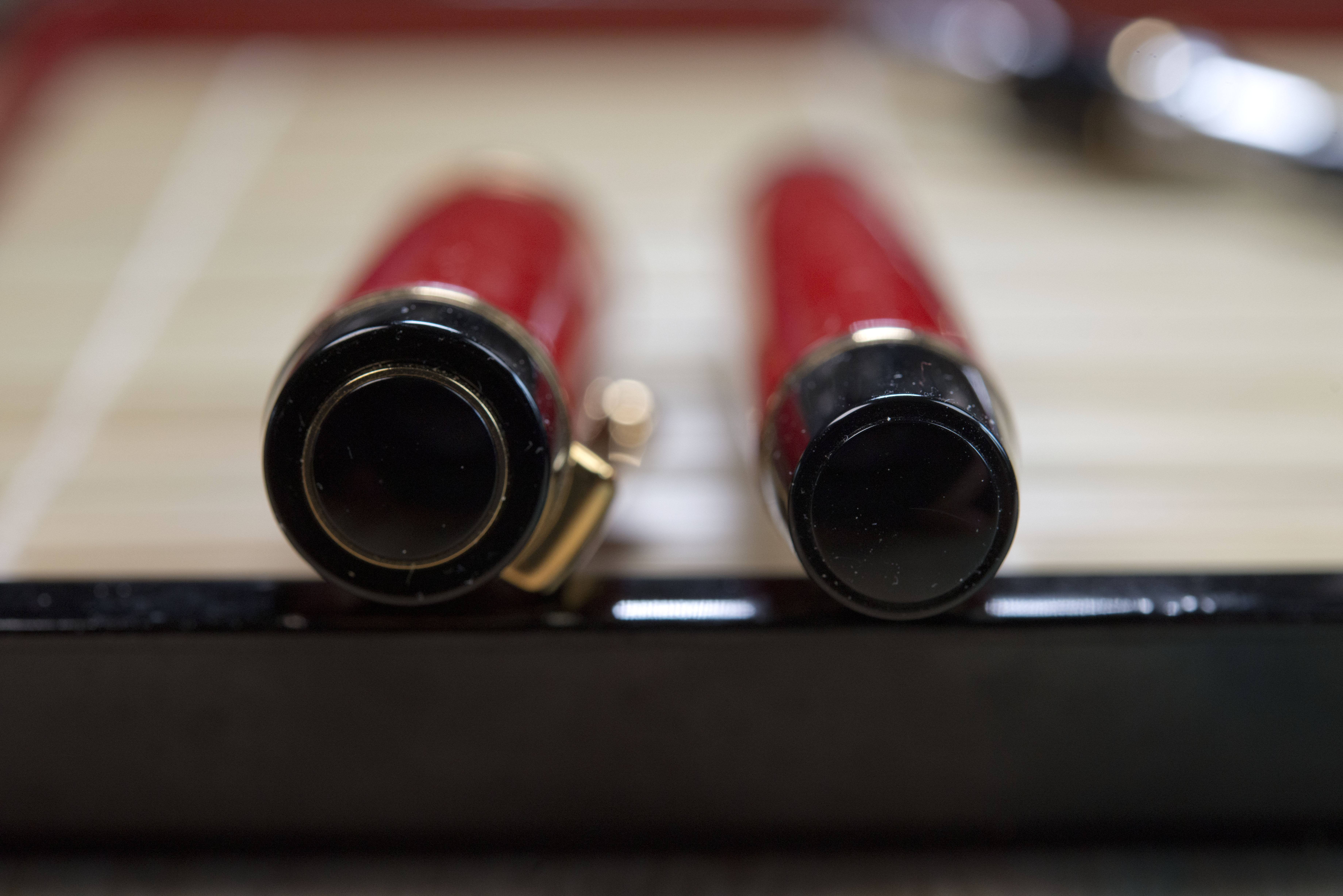 The core of the cap is a resin inner barrel, which expands at the bottom to form the opening.  A large ring is mounted on to this, then a thinner one just a little higher.  Next is the main length, made of vermilion coloured urushi lacquer carefully, née perfectly, applied in multiple layers over an ebonite tube which tapers down towards where the finial sits.  This is followed by the clip band, with the clip itself secured in a small nock at the end of the ebonite.  A black resin finial then sits at the end which hosts a gold coloured ring in which there is a raised disk.  The main cap band is engraved with ‘Custom Urushi’ below the clip and ‘Pilot Made in Japan’ on the opposite side.  There are two sets of three small stars between each piece of text, again on opposite sides to each other.

The barrel starts with resin threads which are both soft to touch and also so far back due to the scale of the pen that you’re barely going to notice them.  The threads end where the urushi lacquered ebonite starts.  The barrel then curves gently out before curving gently back in again to meet a gold ring just before the end.  On the finial there is a slightly raised disk, similar to on the cap, but this time without the ring.

The quality of the lacquer work is such that would be easy to think this was a moulded plastic pen.  While the feel is a give away, visually you would think the body and cap were created by machine.  It is only under a loupe that you can make out the slight variations along the side of the pen where hand application and smoothing of the lacquer means you can’t get a precise edge/surface. 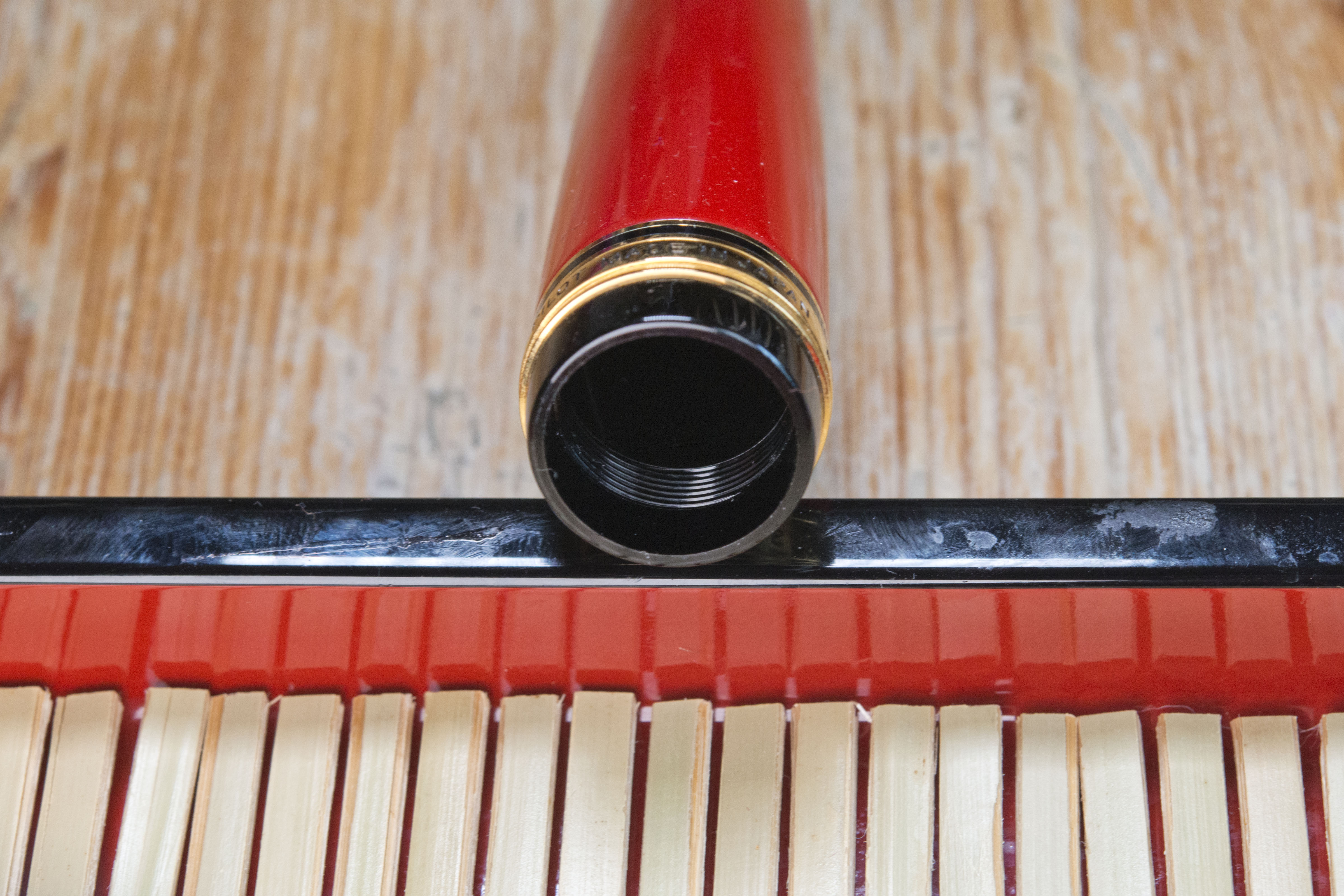 Note with the cap, it can be safely posted.  The resin finial part of the barrel locks in to the tighter sealing part of the cap and the lower ring prevents the lacquer work from touching the inner threads, preventing the finish from being at risk of scratches.  It does post securely, and while posting does move the point of balance backwards it still sits in the crook of the hand, so not making the pen feel unbalanced, just long. 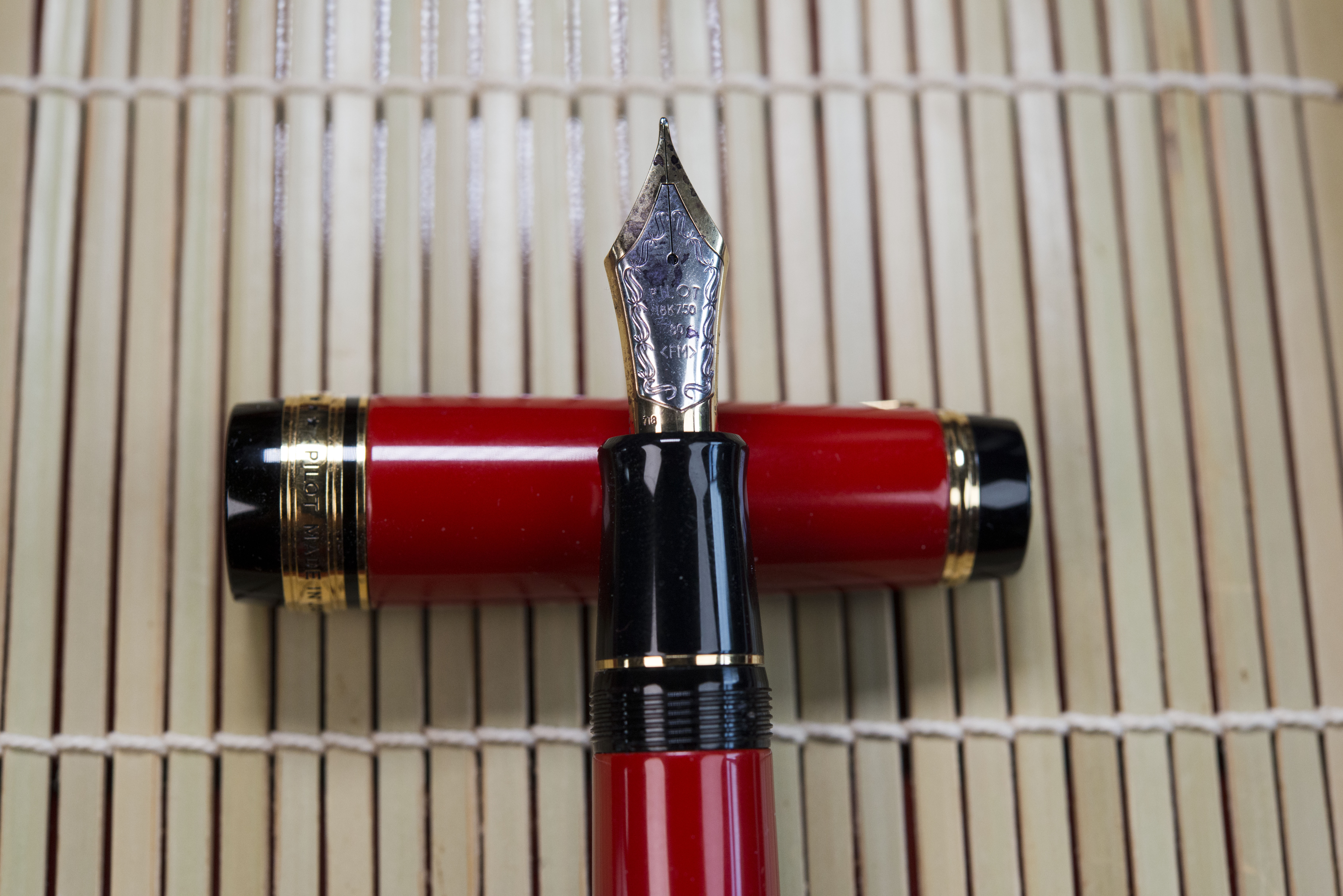 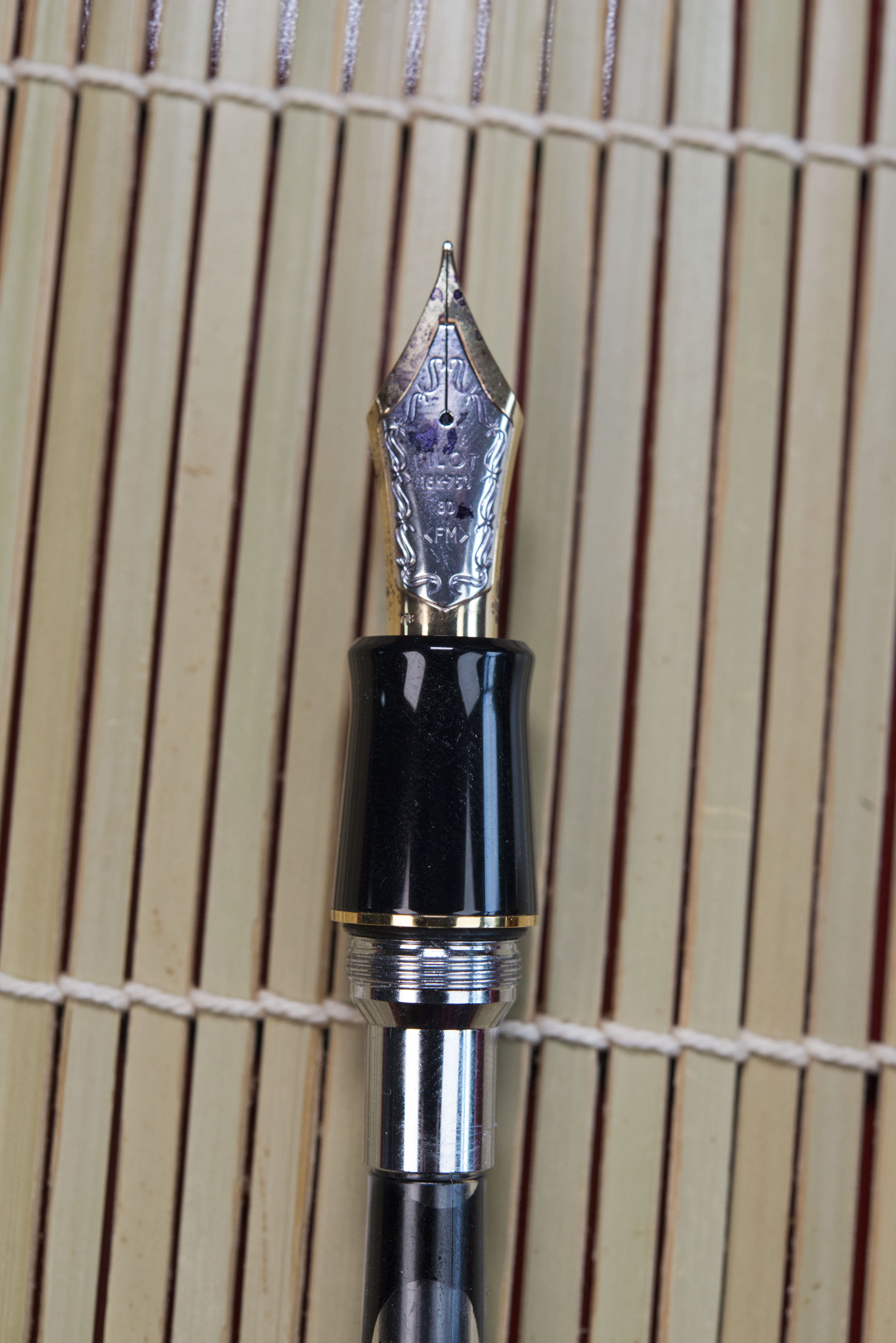 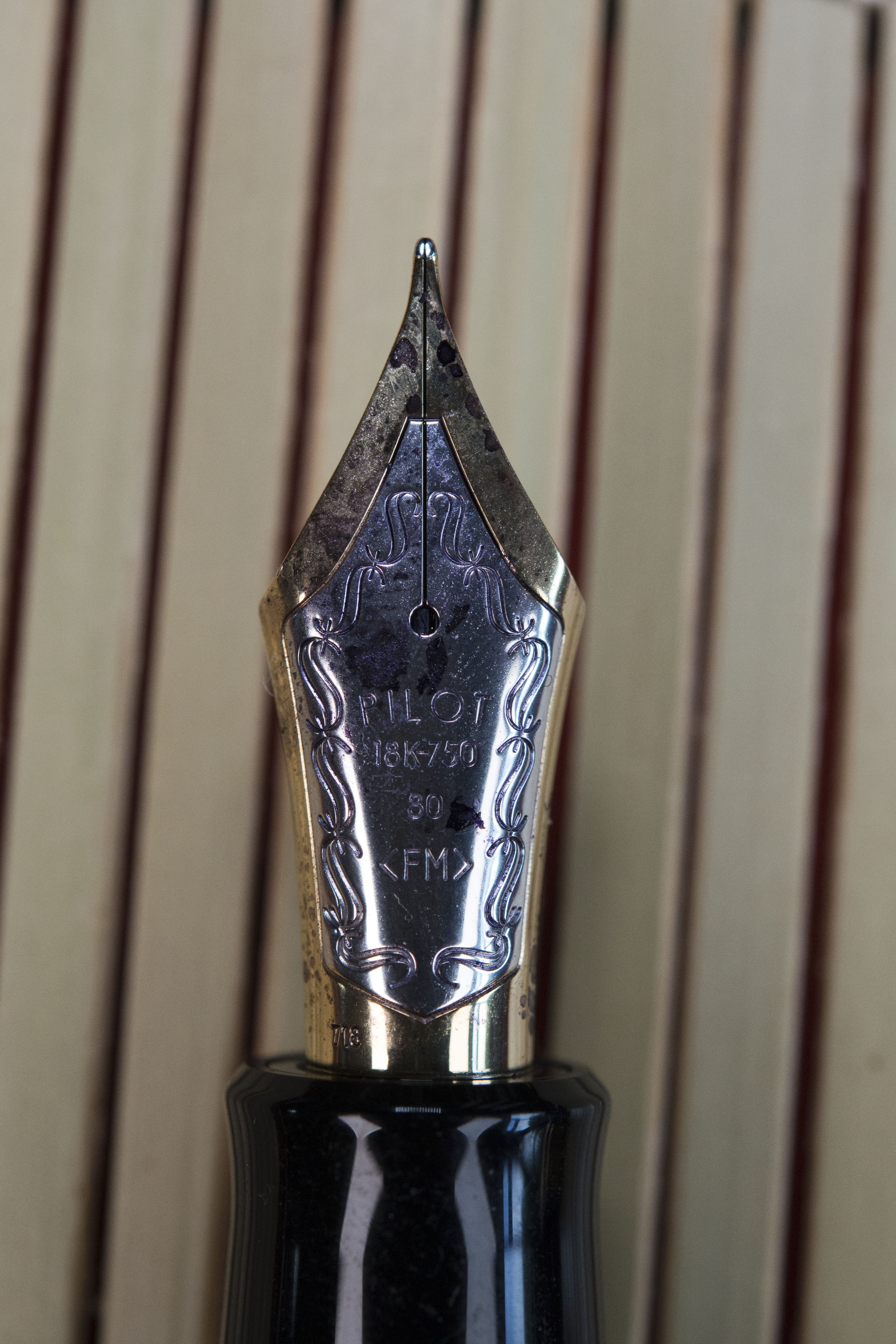 The nib section is actually made out of a black resin, not ebonite.  It has a very similar shape to most of the Pilot Heritage pens, being a taper down towards the nib then a sweep out at the end.  At the back of the section there is a decorative ring, beyond which you have the threads which appear to be a metal unit secured into the grip.  The nib is 18k gold and Pilot size 30, the largest they make.  Whilst large, visually it looks correctly proportioned for the pen.  Pattern wise the nib is bi-coloured with a gold outer edge and a rhodium plated inner.  The feed is plastic and does a very good job of providing a decent flow to the nib.  There is some variation and you can gently (and carefully) flex the tines with no rail roading.

The writing experience is very pleasant.  The Fine-Medium nib on this particular pen lays down a nice wet line, similar in width to a European fine.  It’s not as smooth as the medium on the 823, but then I am comparing different sizes both in nib and tipping.  The one downside to this specific pen is the tipping is not quite even.  The tines are perfectly aligned, but the underside of the tipping is angled slightly.  This means hold the pen just out of position and it feels a little scratchy, find the sweet spot and it’s smooth.  Oddly I actually bought this pen second hand off a left hooker and when I tried to emulate his pen holding position it resulted in the perfect spot for the nib.  Over time the excess tipping will wear down, though could be easily rectified with some micro mesh.  As I rotate my pens just the right amount for this nib there’s no need for me to speed up the process.

There is a potential elephant in the room when it comes to the tactile experience.  Its size.  I was able to buy this nearly new, barely used pen from a friend who was heart broken to find it was just too large for him, and this is someone who has no problems with Montblanc 149s, Pelikan M1000s, and Sailor KoPs.  I too am uncertain if it has too much girth for me.  I can use it, and have been doing so, but I still find it a little uncomfortable after a short while.  The situation is improving and I’m in no hurry, so we’ll see if my experience improves over time. 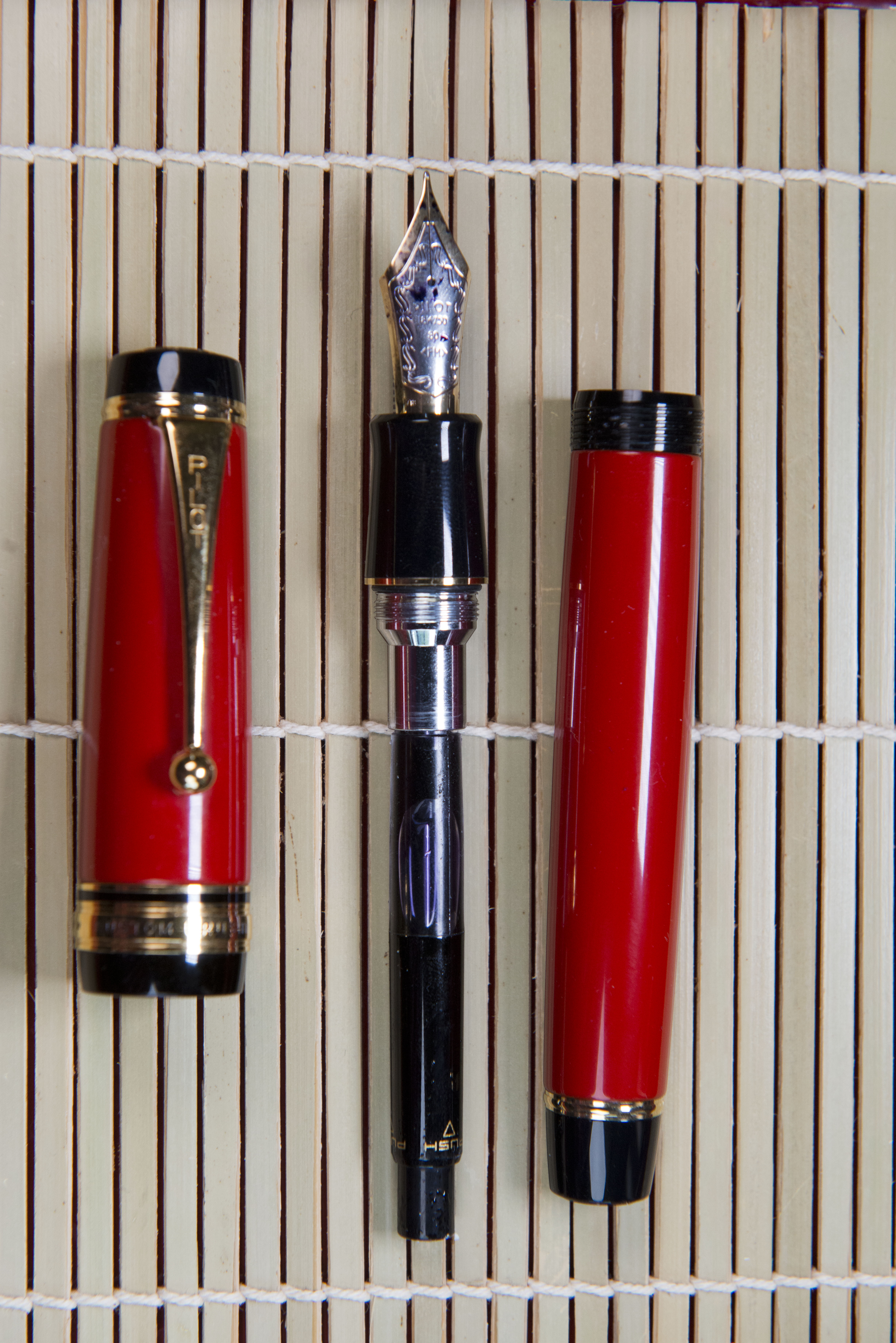 The filling mechanism is Pilot proprietary and the pen comes with a Con-70 converter already installed.  This is relatively easy to fill and has a large capacity, though from experience I can find this type to be a bit of a pain to clean.  I did read of a trick where you use a syringe to squirt water up the inner bar you can see inside, however I could never get this to work so either I misunderstood the trick, else UK sourced non-medical syringe needles are wider than US ones.

One thing that might surprise people is the packaging.  After all it is a flagship pen, most Namikis come in large pine boxes and even the LE Vanishing Points come in luxury white ones.  With this pen (and I checked YouTube review videos to confirm I had the correct box – being as second user pen) you get a simple blue hinged box, anonymous in looks, which is held in a plain blue cardboard box where one side folds down, and around this a cardboard sleeve.  In the box, under the tray, there is an ink cartridge, a user guide, and an urushi guide, no bottles of ink or polishing cloths.

So my thoughts.  Hard to say.  To the uninitiated it is just a large plastic pen, but this is a good thing and does speak of the simplicity of the design and the quality of the finish.  The nib could have been an issue as I have strong feelings about not being perfect out of the box, but like with the previous owner, the position I hold the pen means I hit the sweet spot.  Size is an issue though.  This pen is too large for most collectors I know and this may continue to be a problem for me.  Pilot also make the smaller but similarly shaped Custom Heritage 845, which is around half the price.

Price wise it is obviously not cheap.  The pen is now becoming available in Europe and soon should also reach UK retailers (along with the Custom Heritage 823 and 845).  Presently it’s going for €1375, though one well regarded place has it for ‘just’ £1000 (€1160/$1290).  This might sound like a lot but remember this is an urushi coated pen created by an artist.  The equivalent Sailor King of Pen is over €2000 and arguably this is the more practical pen, plus as can be seen below, considerably larger. 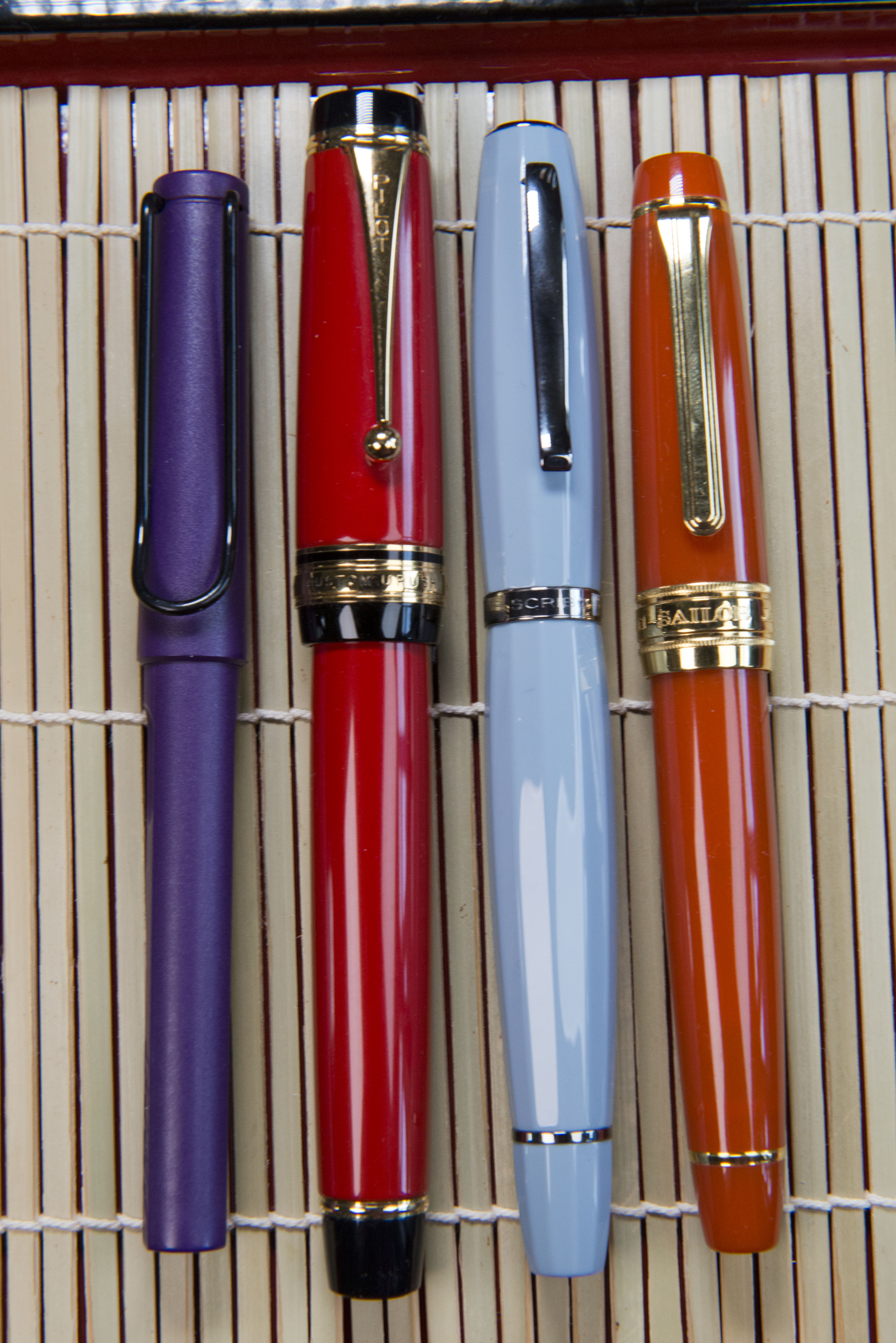 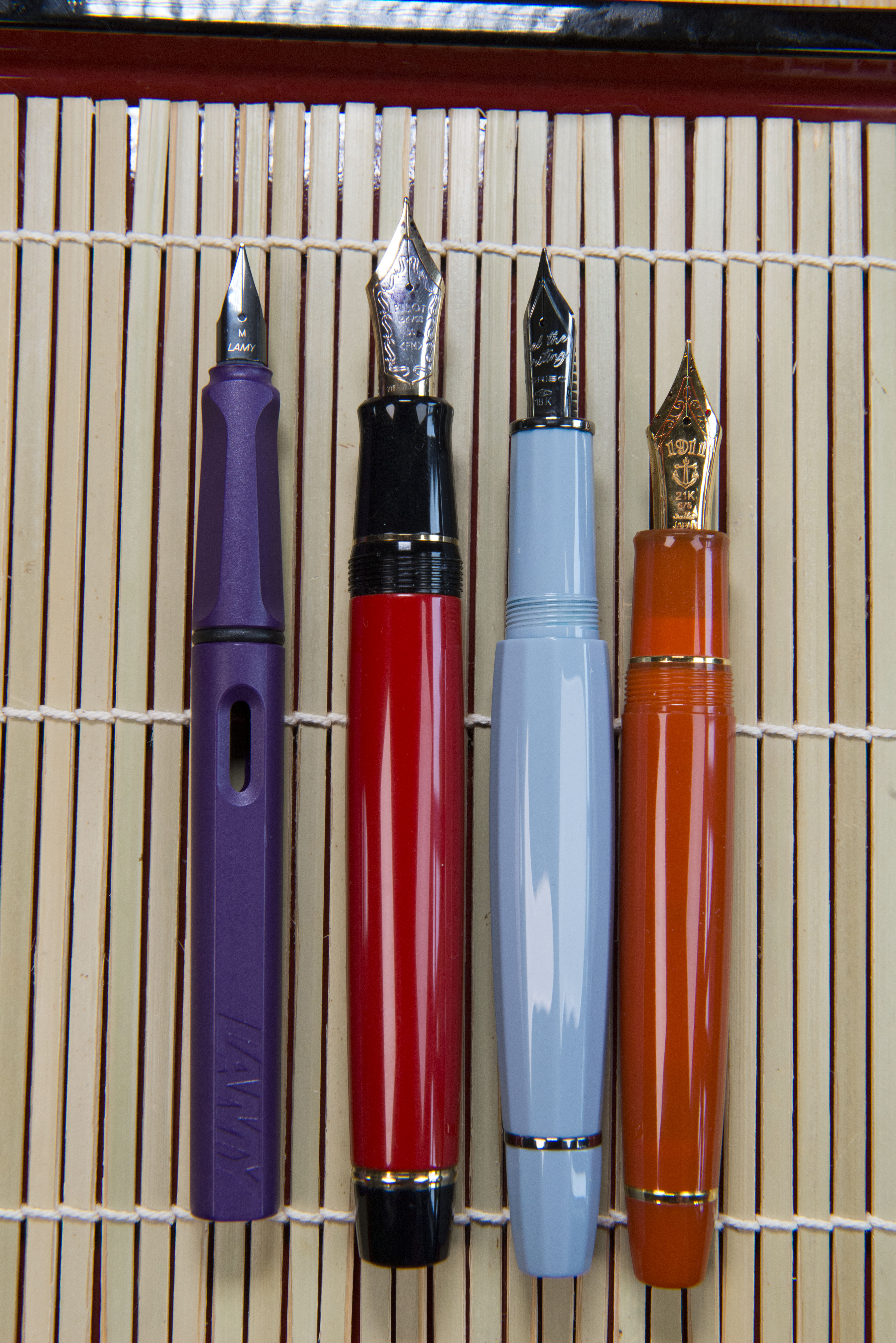 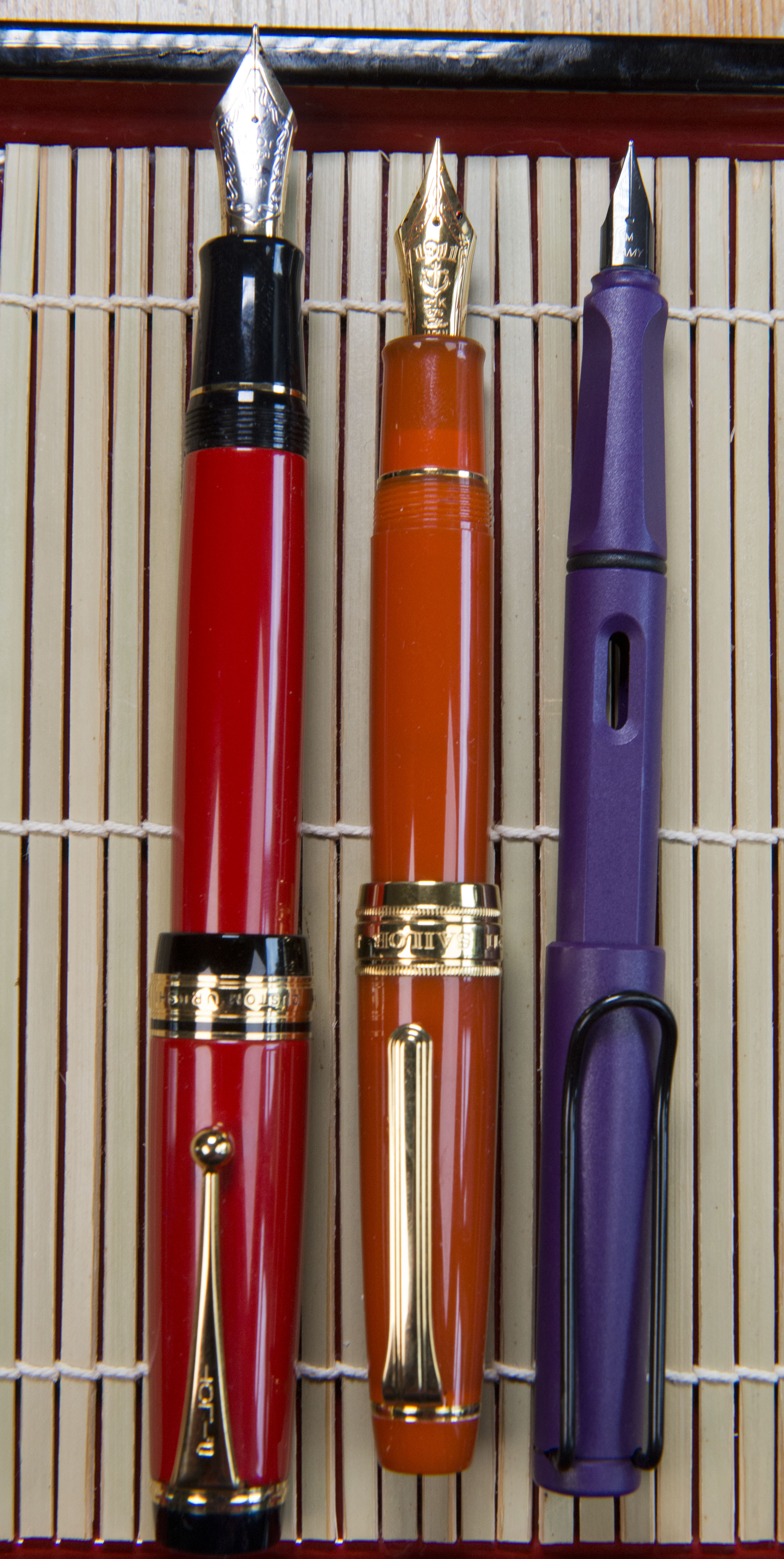 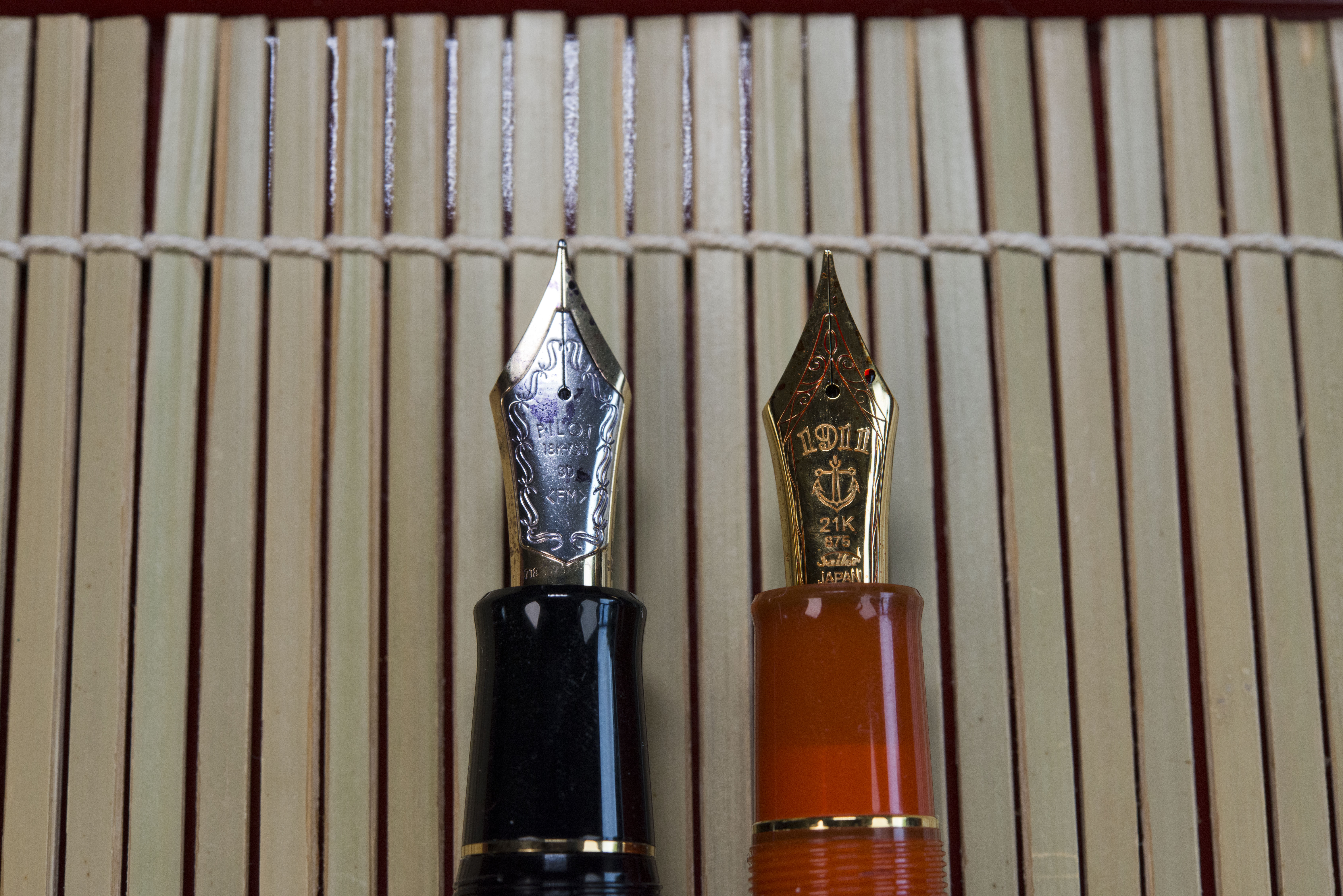 Note, despite the Pilot Custom Urushi being larger, it’s nib is virtually the same size as that of a Sailor KoP. 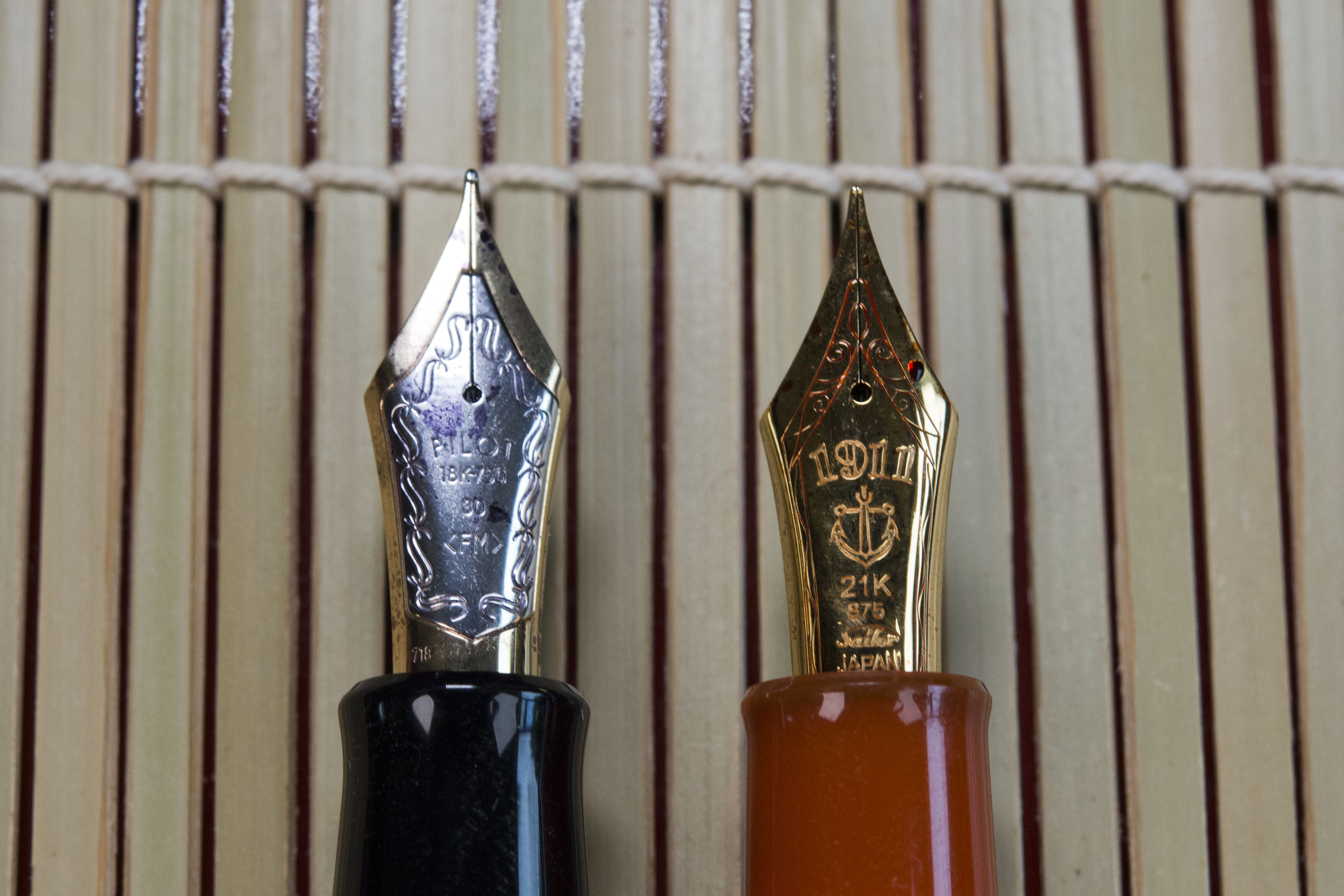 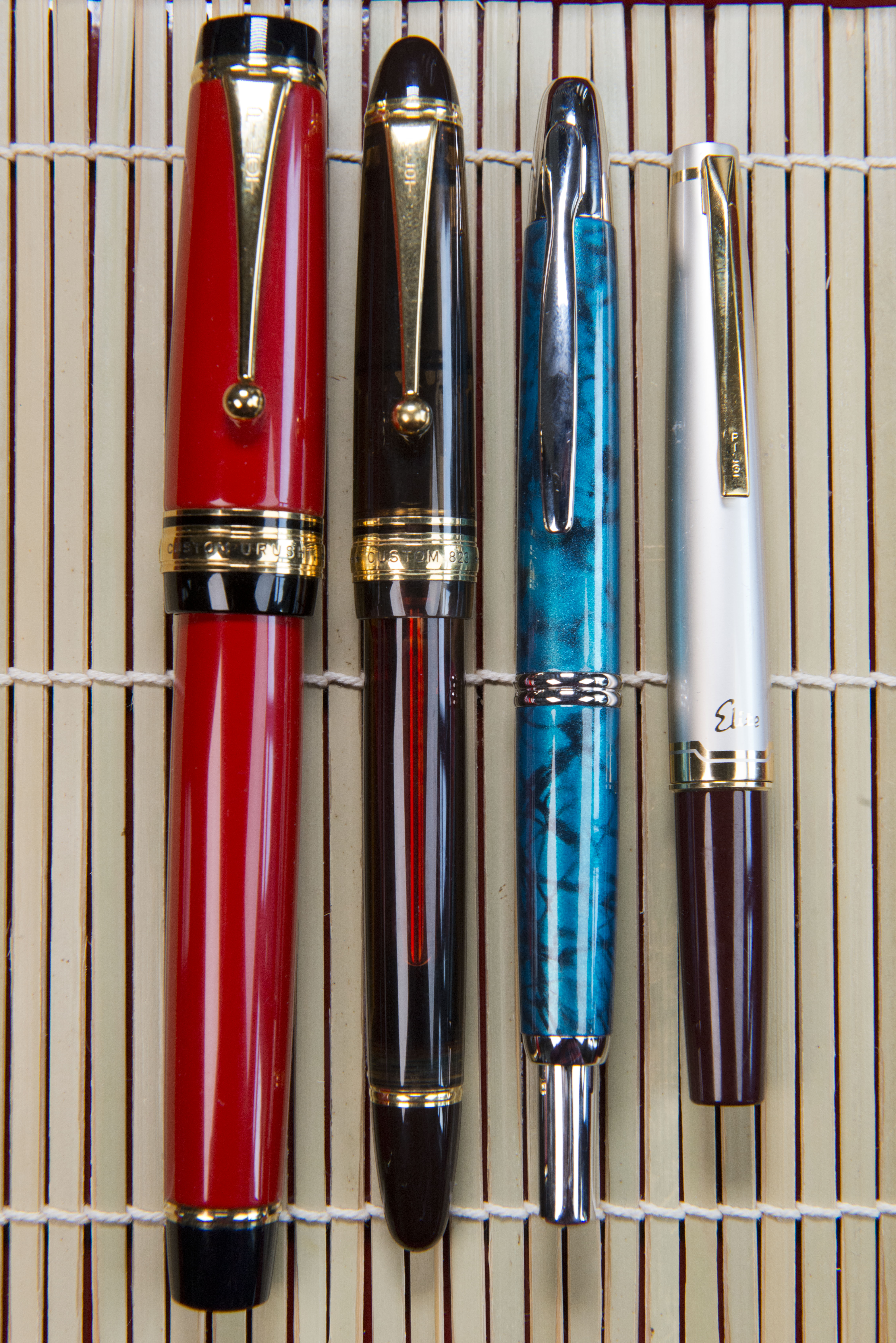 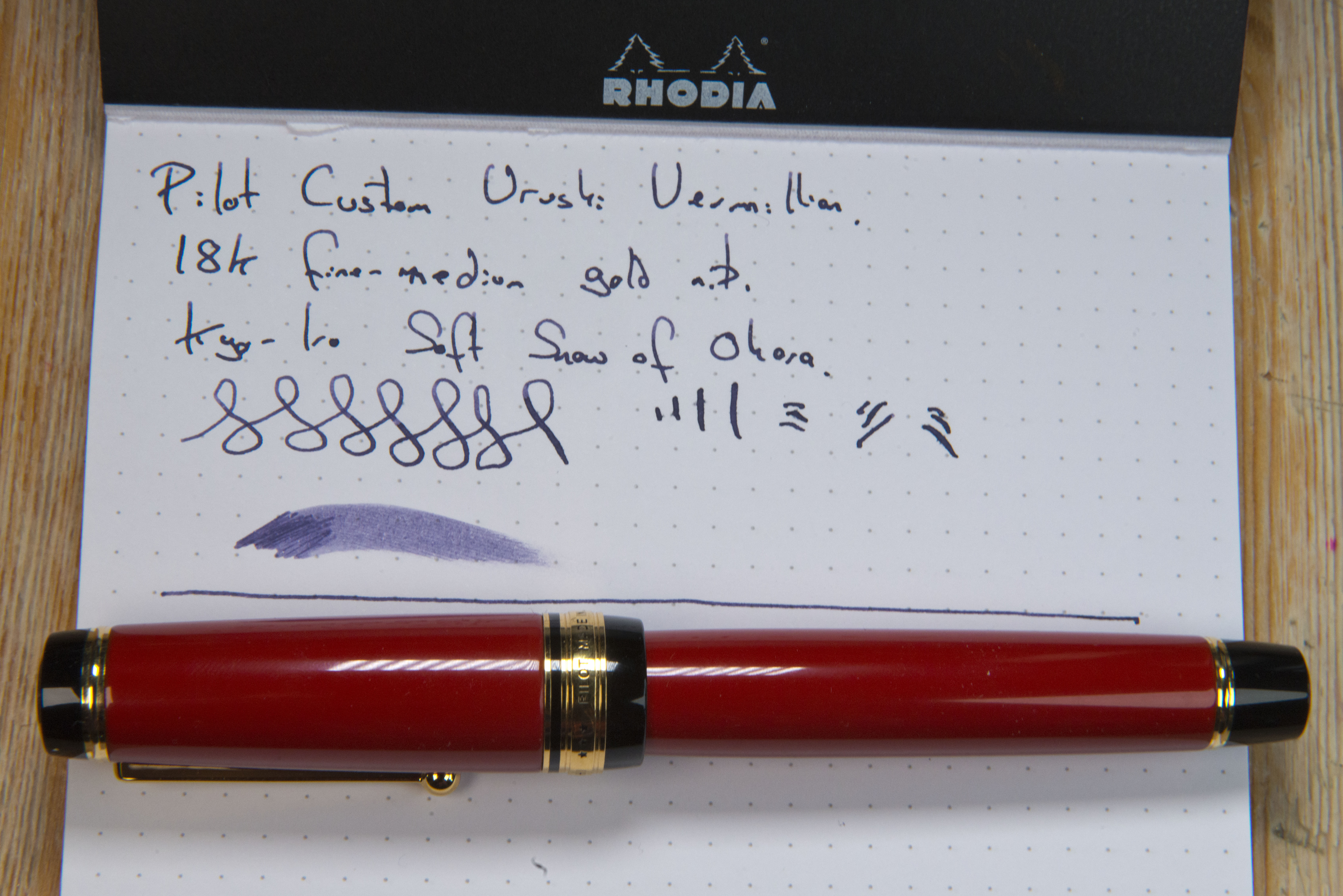 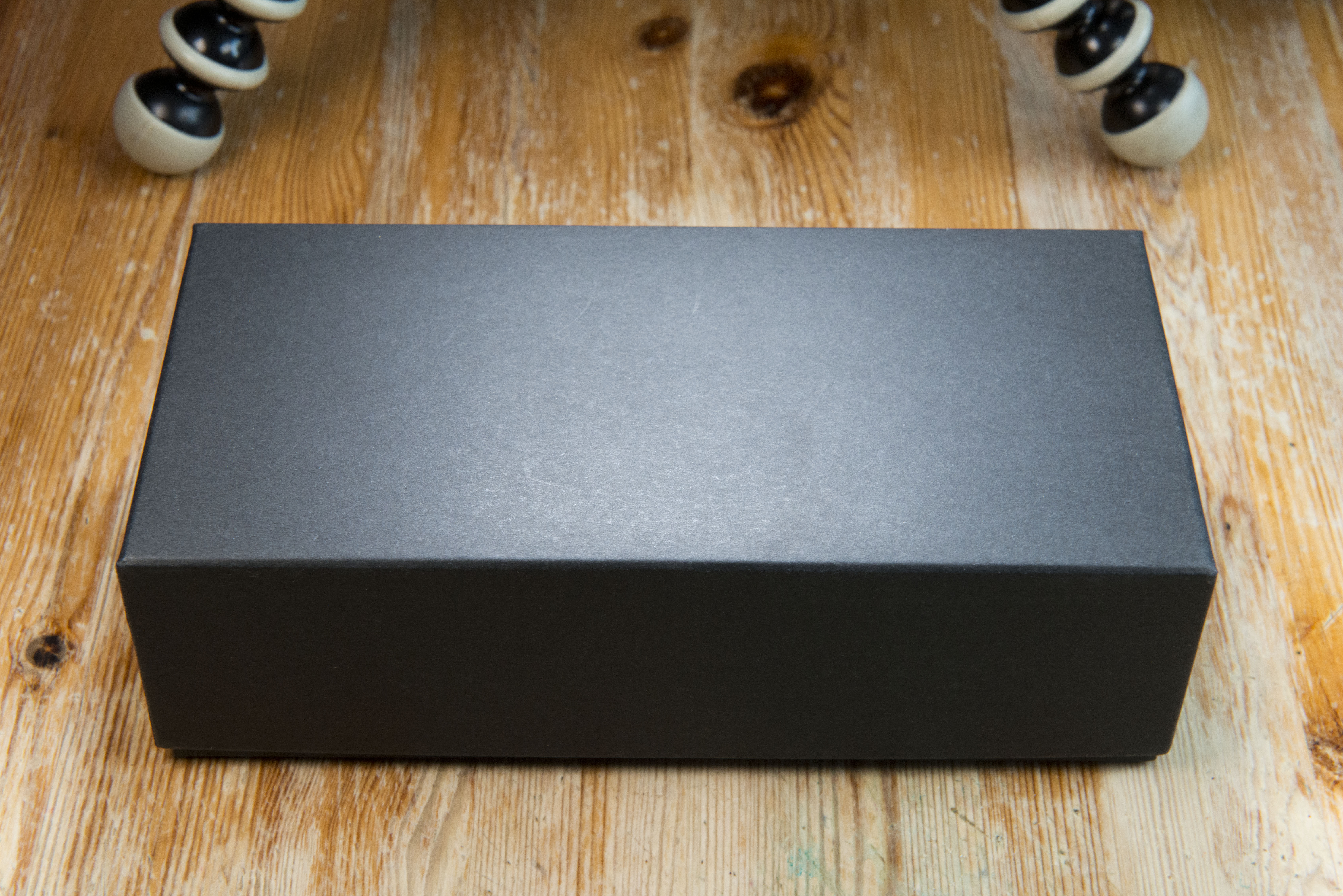 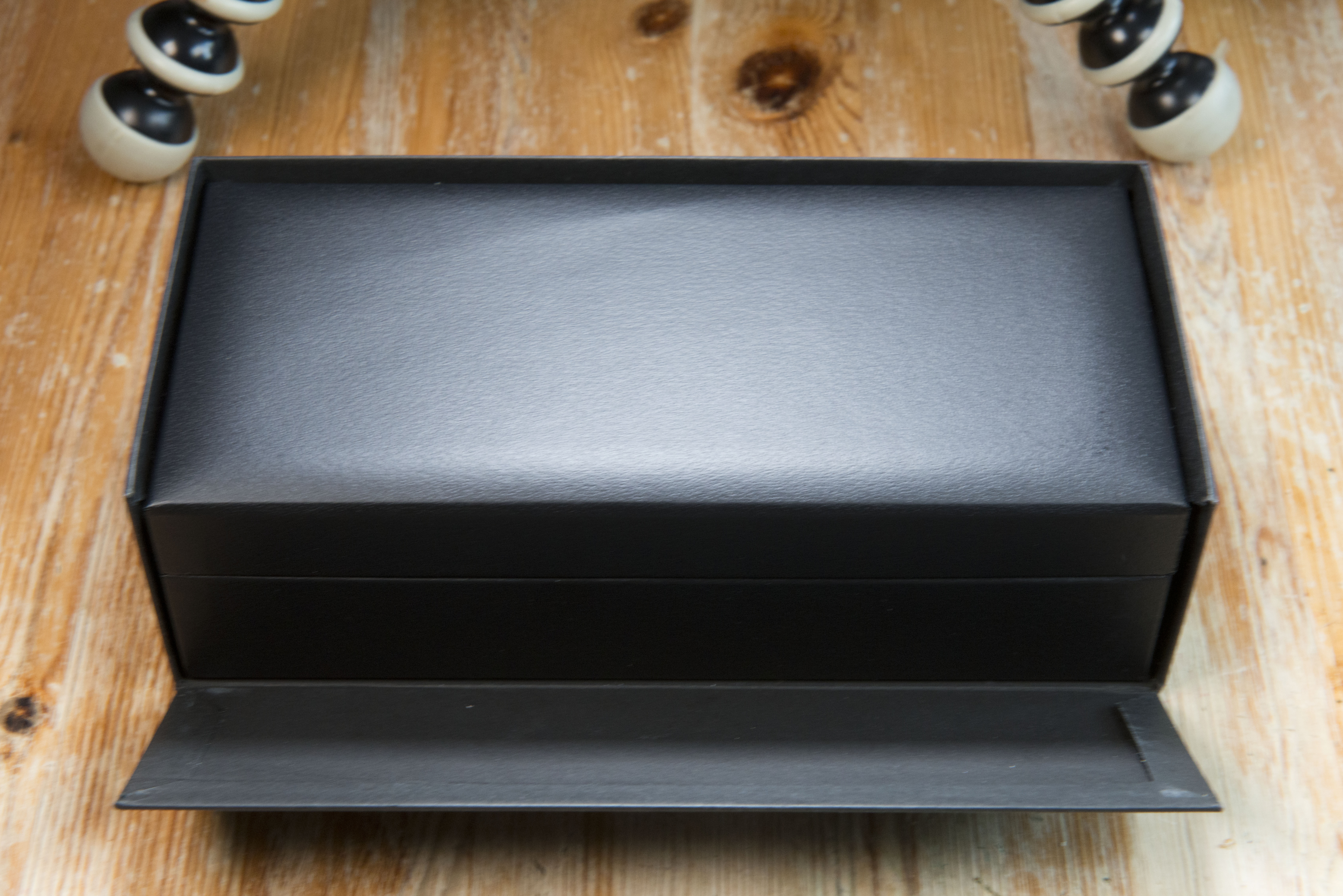 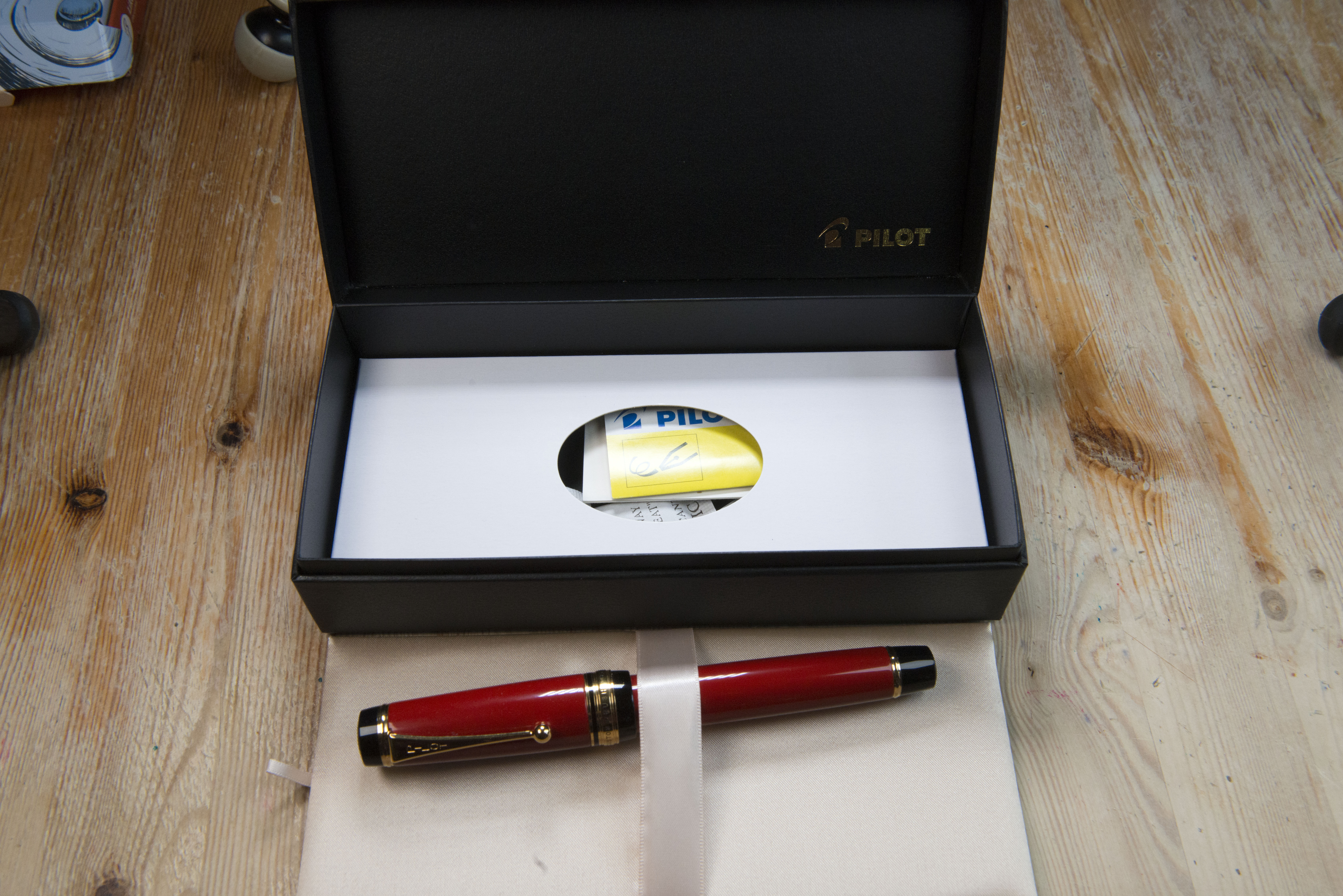 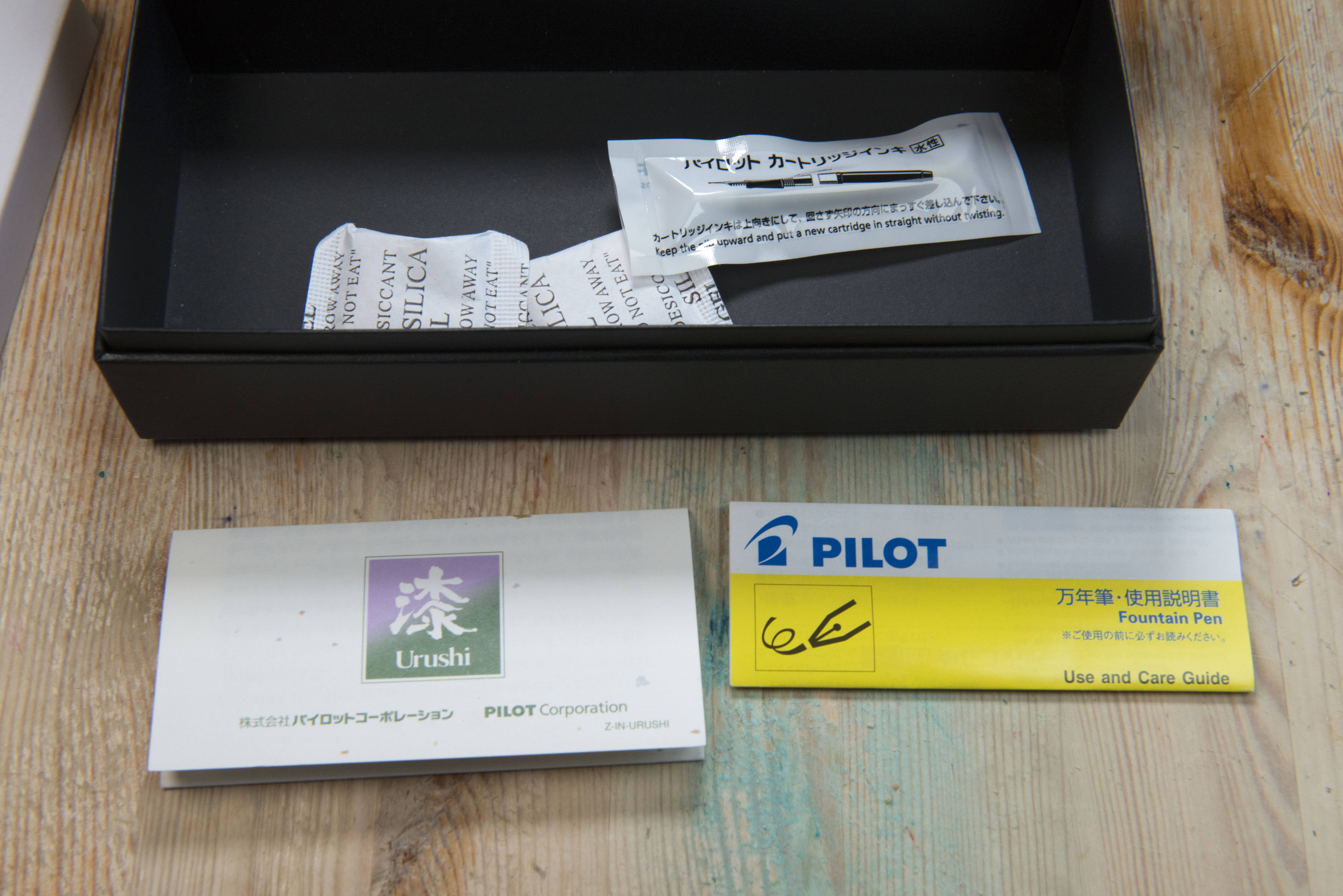