The Scala is an often overlooked pen in the Lamy range, as at launch it competed with the Studio, and in more recent times, with the LX and Aion.  Price wise it is the most expensive of the bunch, both in standard steel nib form, in addition to the gold nibbed special/limited editions.  I actually purchased this pen before any of its rivals in February 2017, first being attracted to its looks, then finding the pen in a sale at a good price.  While the review here is for the specific model, much applies to all versions of the Scala fountain pen, and virtually all to the other gold nibbed versions.

The model is part of the range of limited editions created for the 50th anniversary celebration of Lamy.  At the time there was criticism of the cost of the dark amber 2000 model and the higher pricing seemed to filter down as this pen was around £10-20 more than comparable Scala models at launch.  Over time the prices started to come down to around £165, the more normal price then for a gold nibbed Scala (steel ones were and still are about £85).

The glacier blue finish was unique to this pen, available both as a fountain pen and a roller ball.  It is a very attractive metallic blue with a grey tint.  The finials, clip and grip section are chrome plated, which really goes well with the colour of the pen. 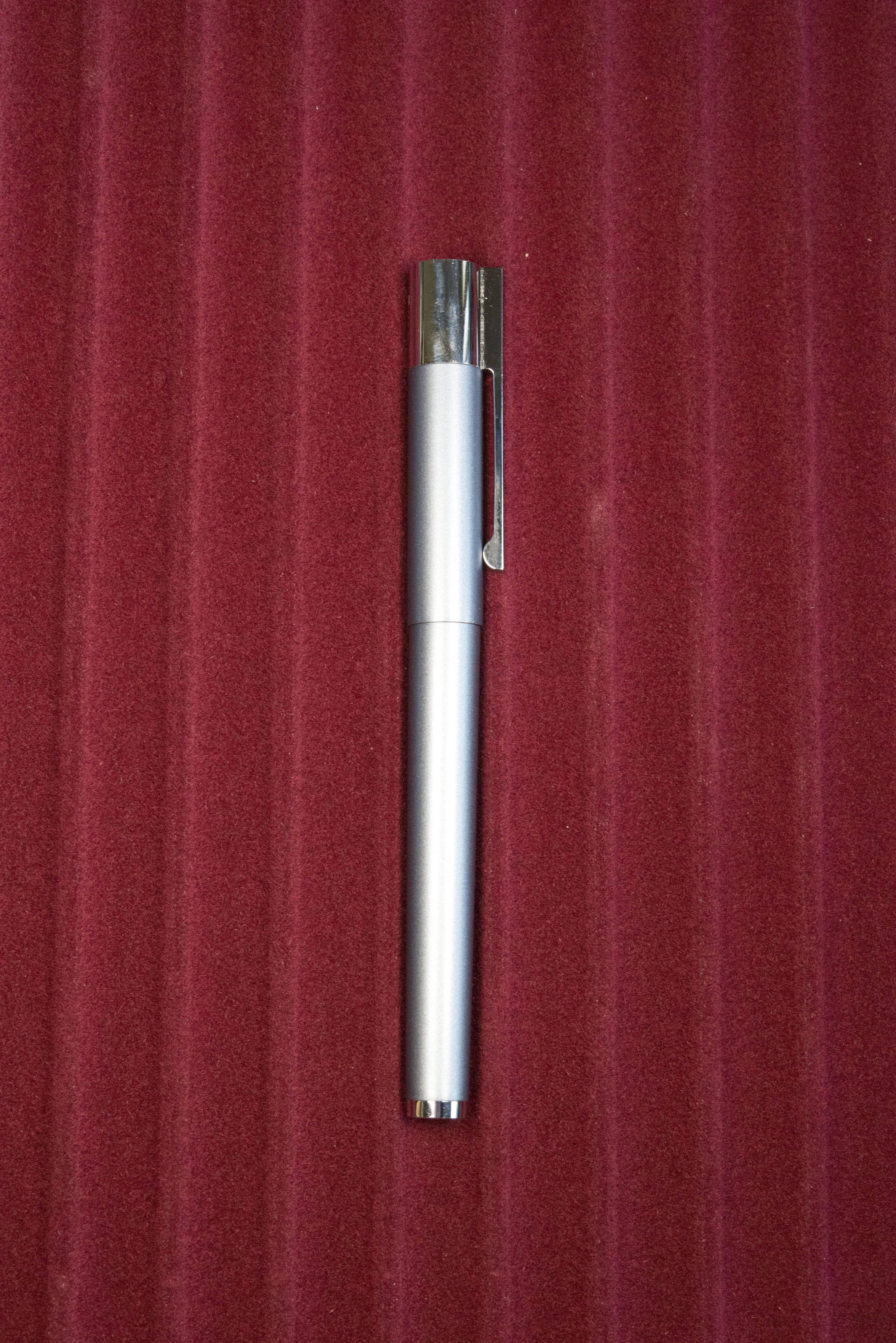 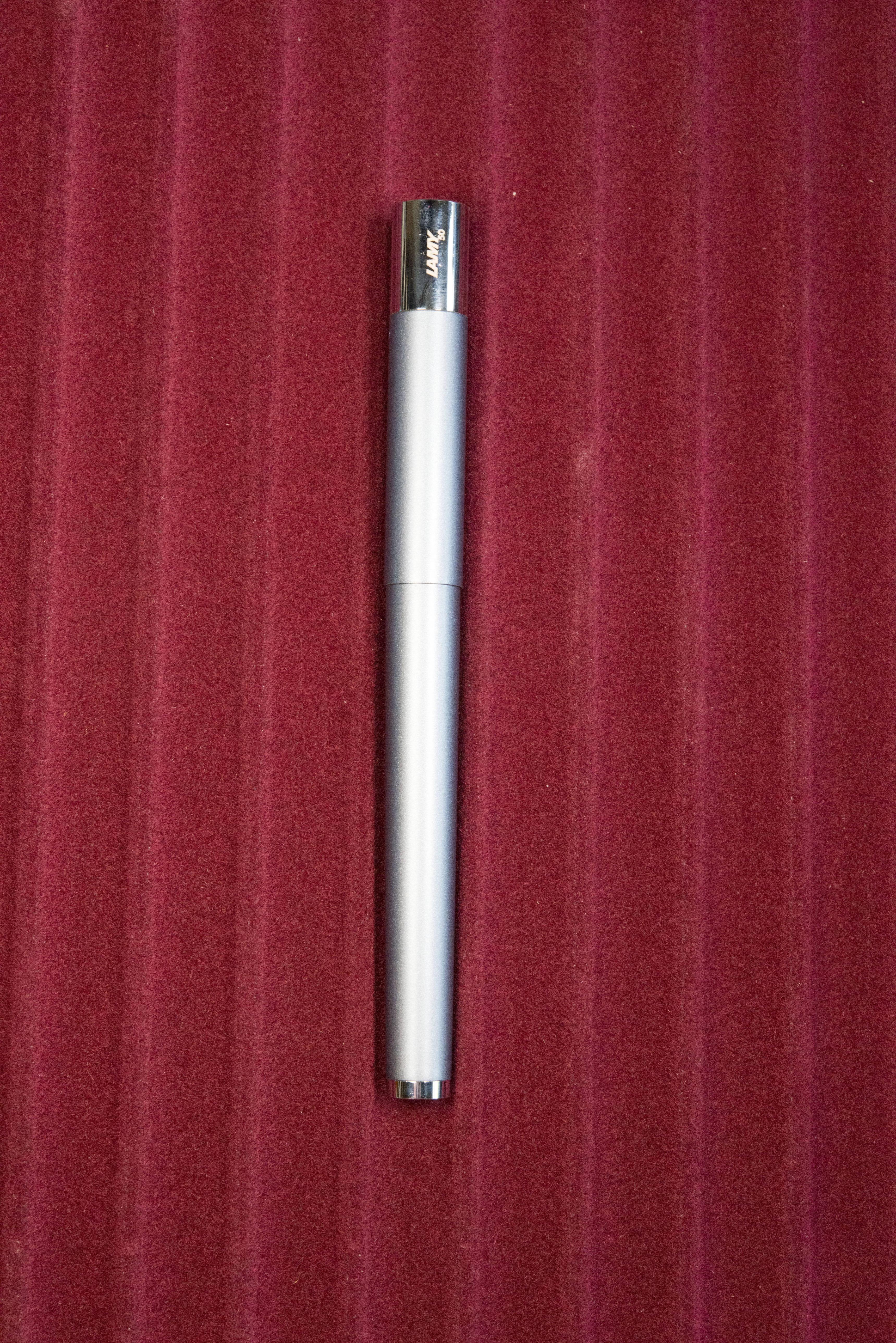 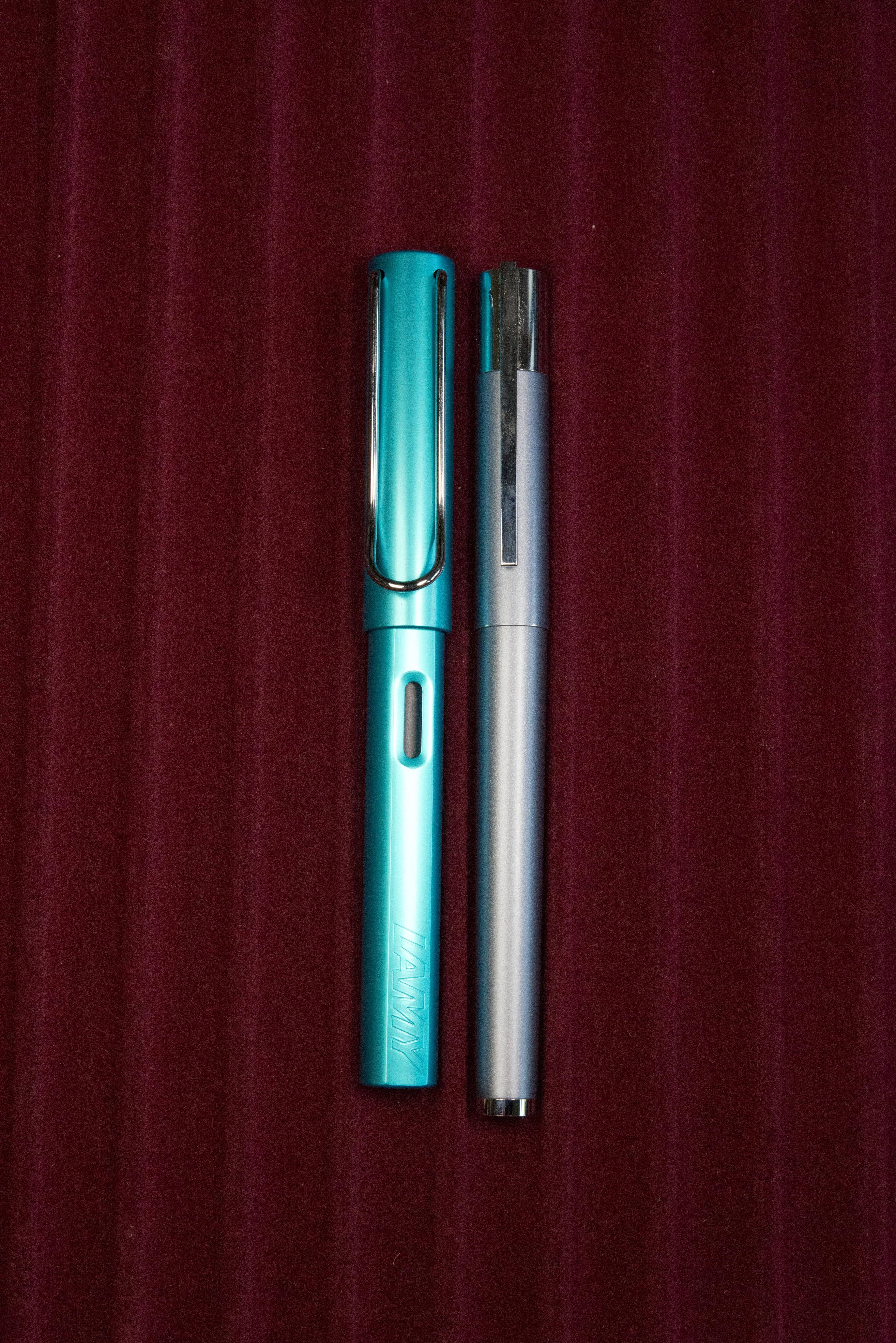 Packaging wise there was a little over-kill (or should that be over-card).  There is a white card outer box, presumably to protect the next during delivery.  The second card box is branded, including 50th anniversary markings, and presumably for shelf visibility.  Inside is the classic large Lamy hinged square box, which with this pen includes a bottle of ink.  The pen came with a convertor in the pen, a polishing cloth, the warranty card, and a bottle of blue ink.  No ubiquitous blue cartridge in this set. 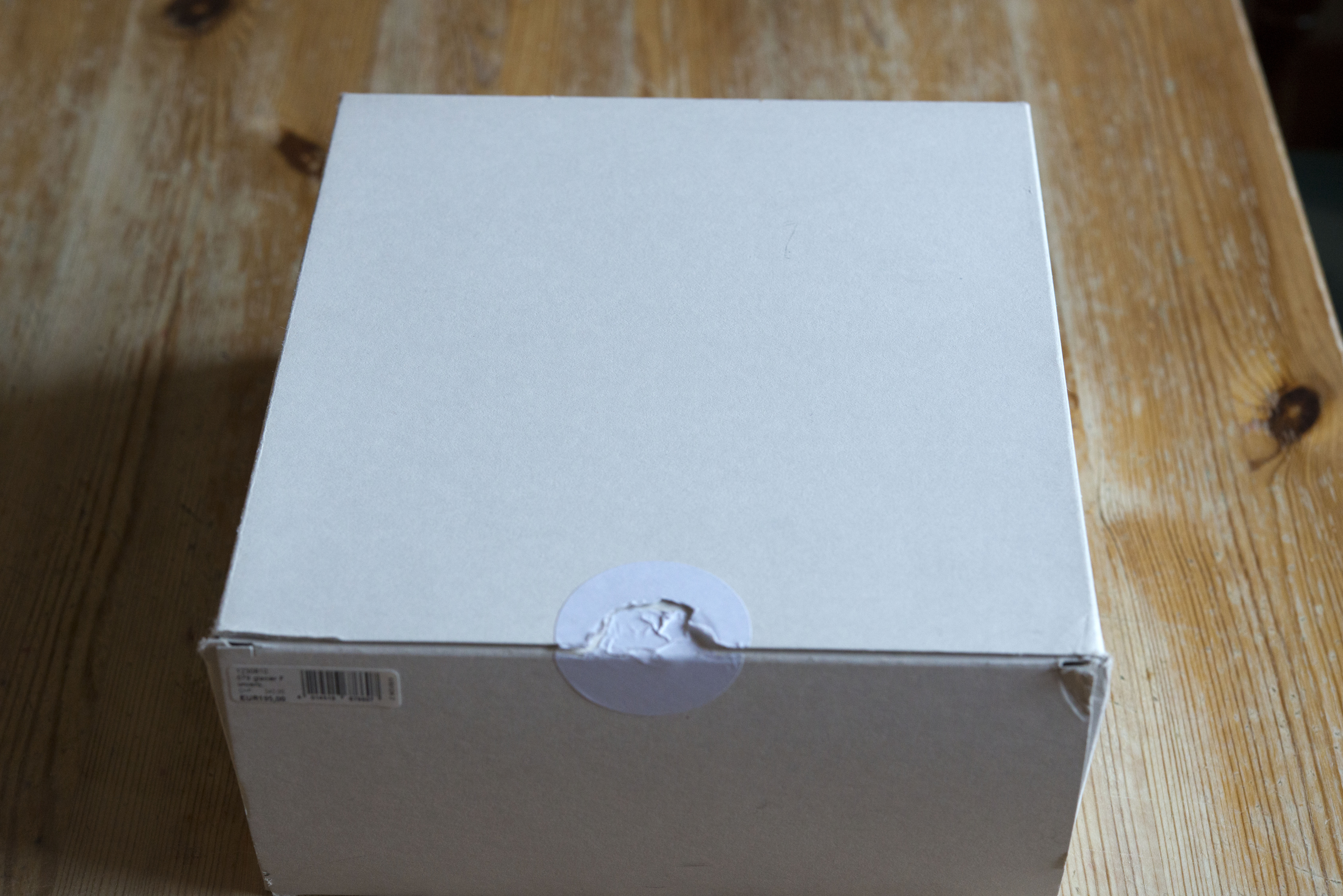 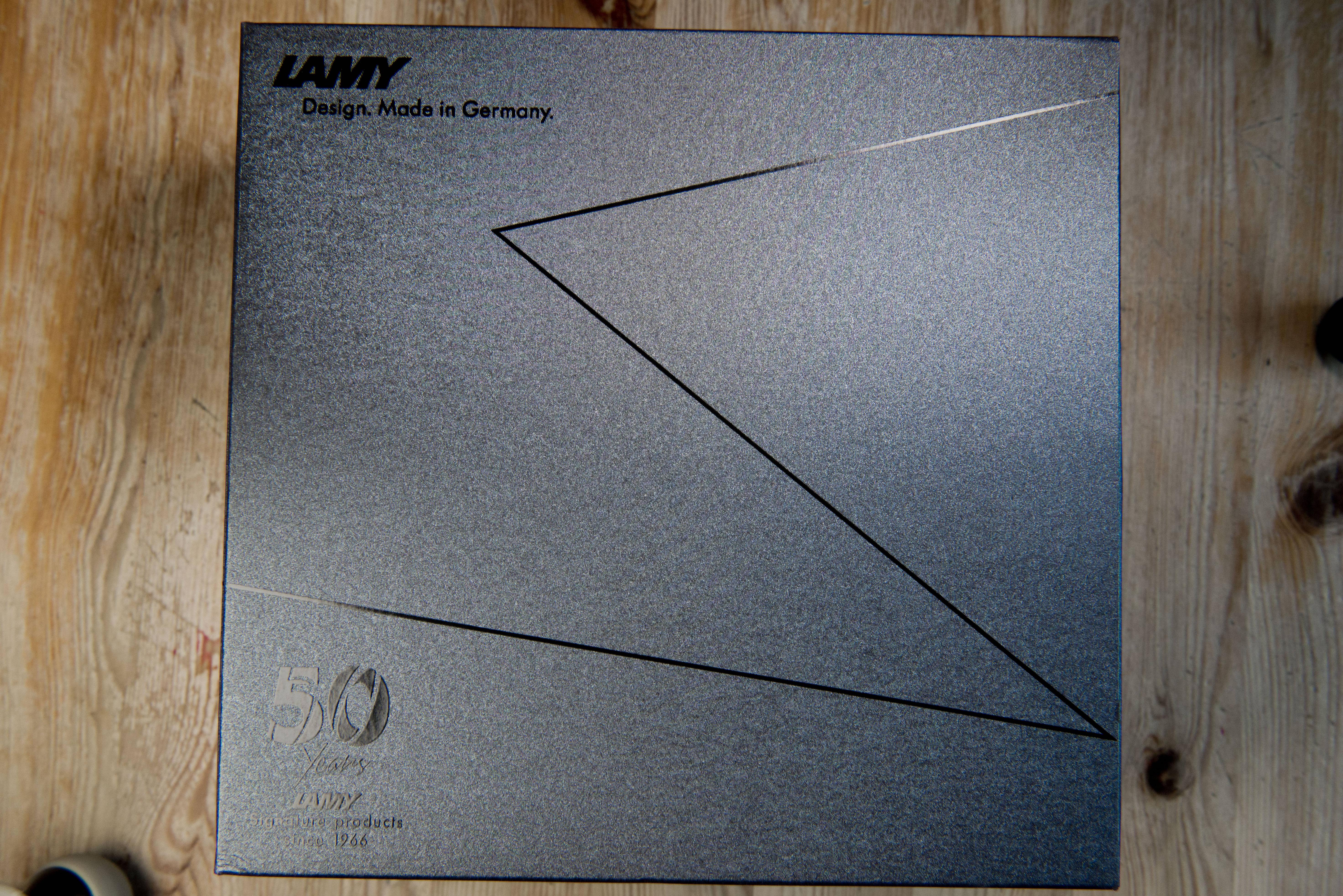 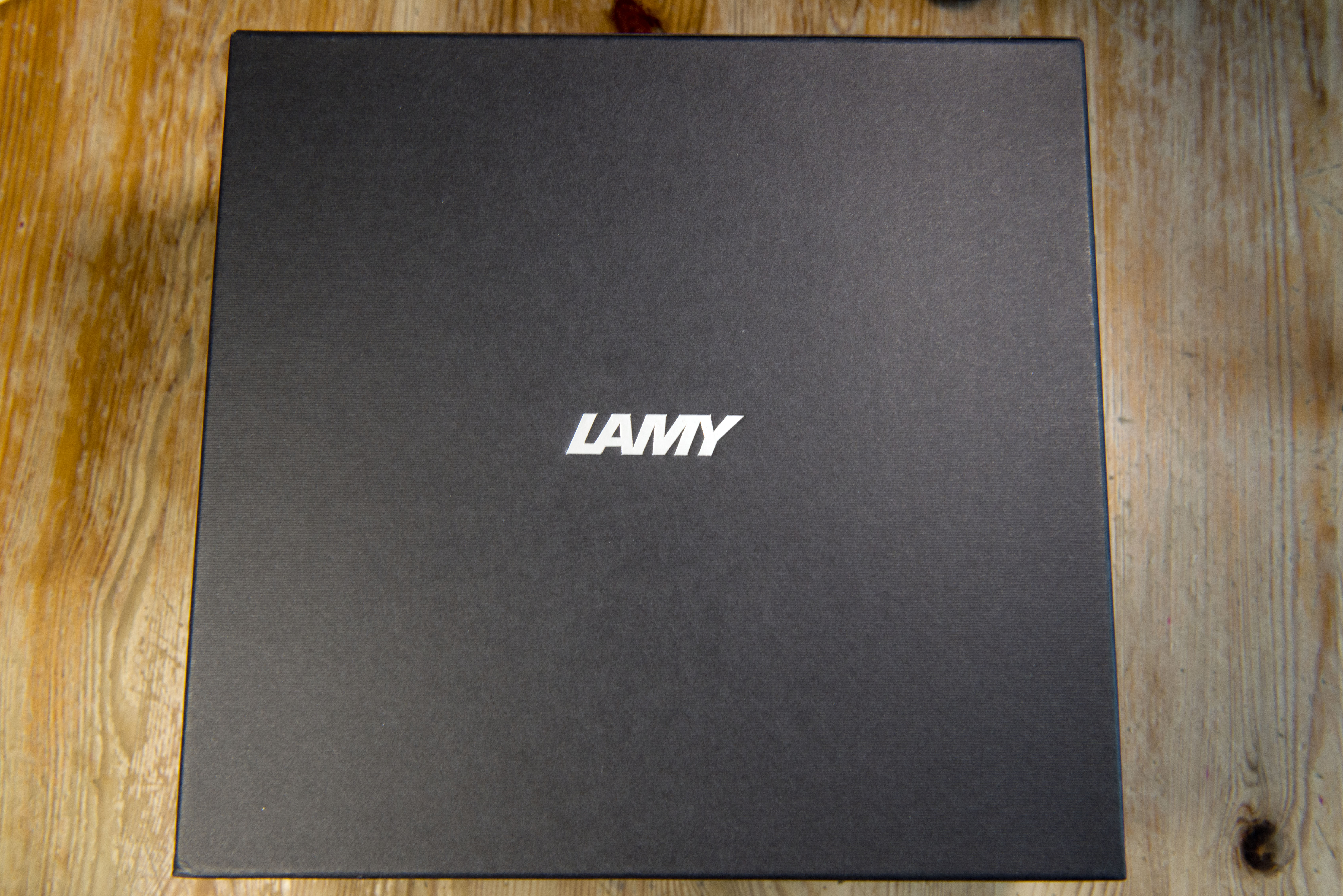 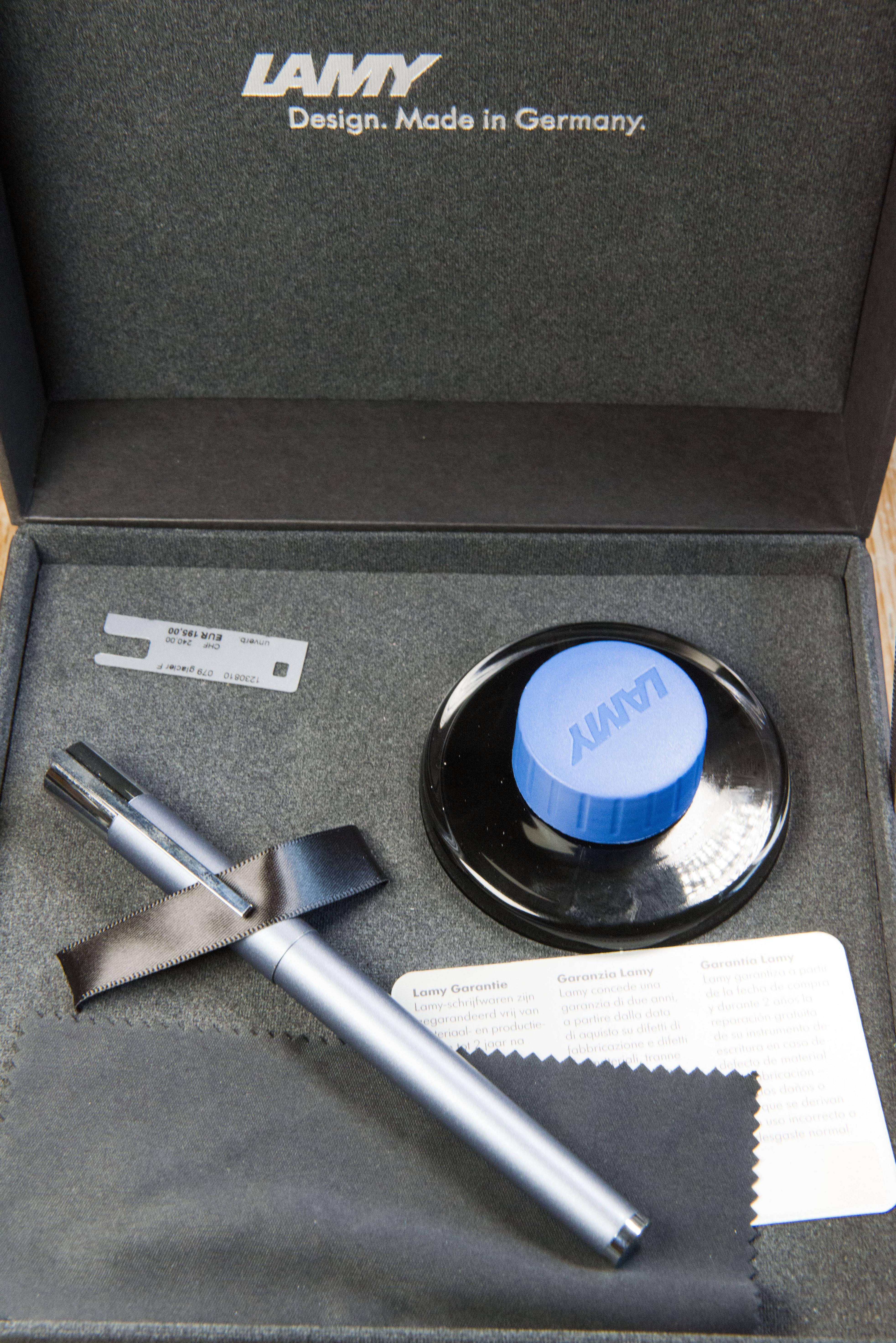 The pen itself is an attractive design by Sieger Design which adheres to the Lamy Bauhaus philosophy.  It is an apparently simple tubular pen with the cap being slightly wider than the barrel.  The chrome plated finials merge in with their sections and are separate pieces.  Running a finger along the transitions, no gap can be felt on the barrel, whereas there is a very slight step down from the cap to the finial, not that you’d normally ever hold or feel the pen here.  The pen is quite long, making it appear thinner than it actually is. 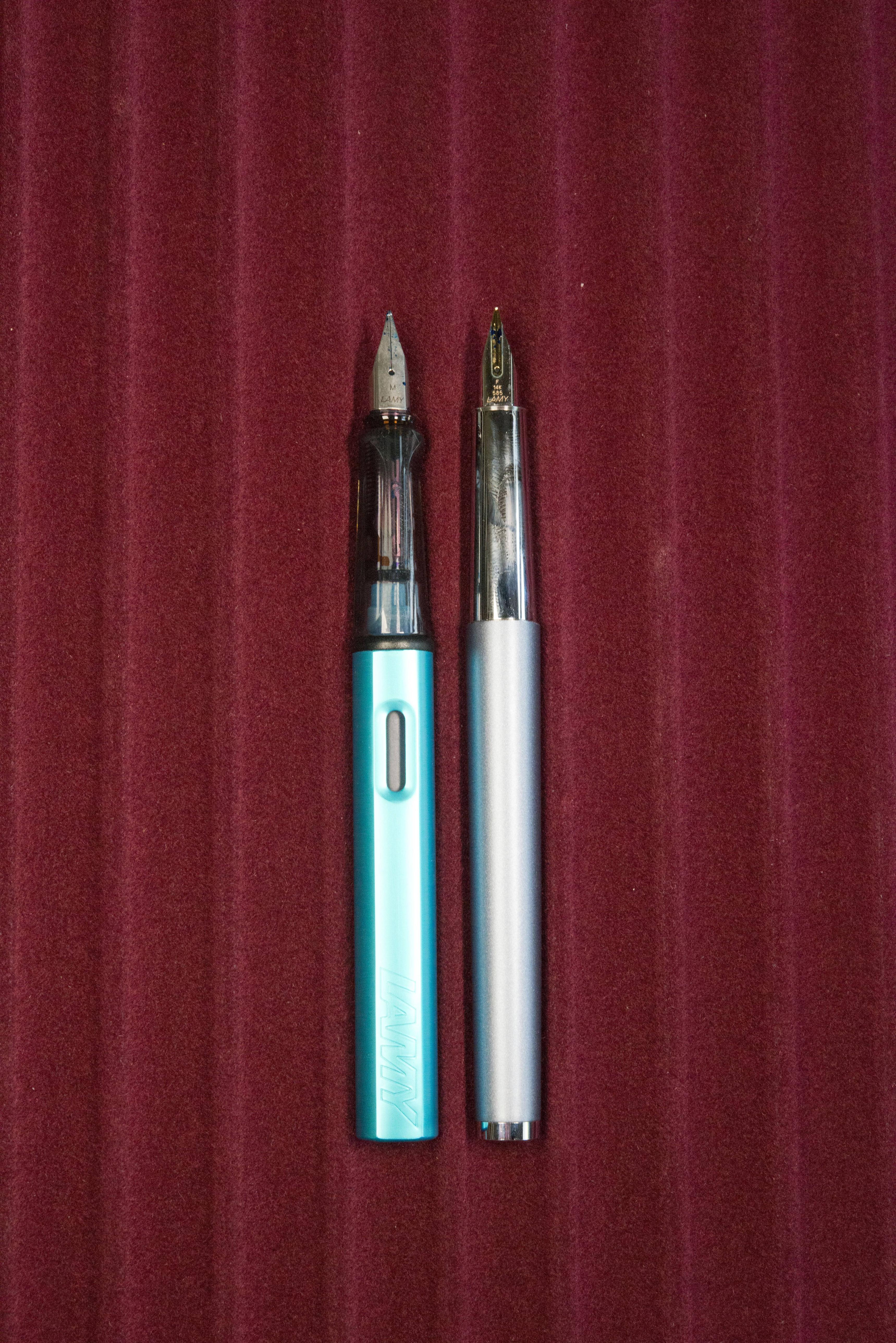 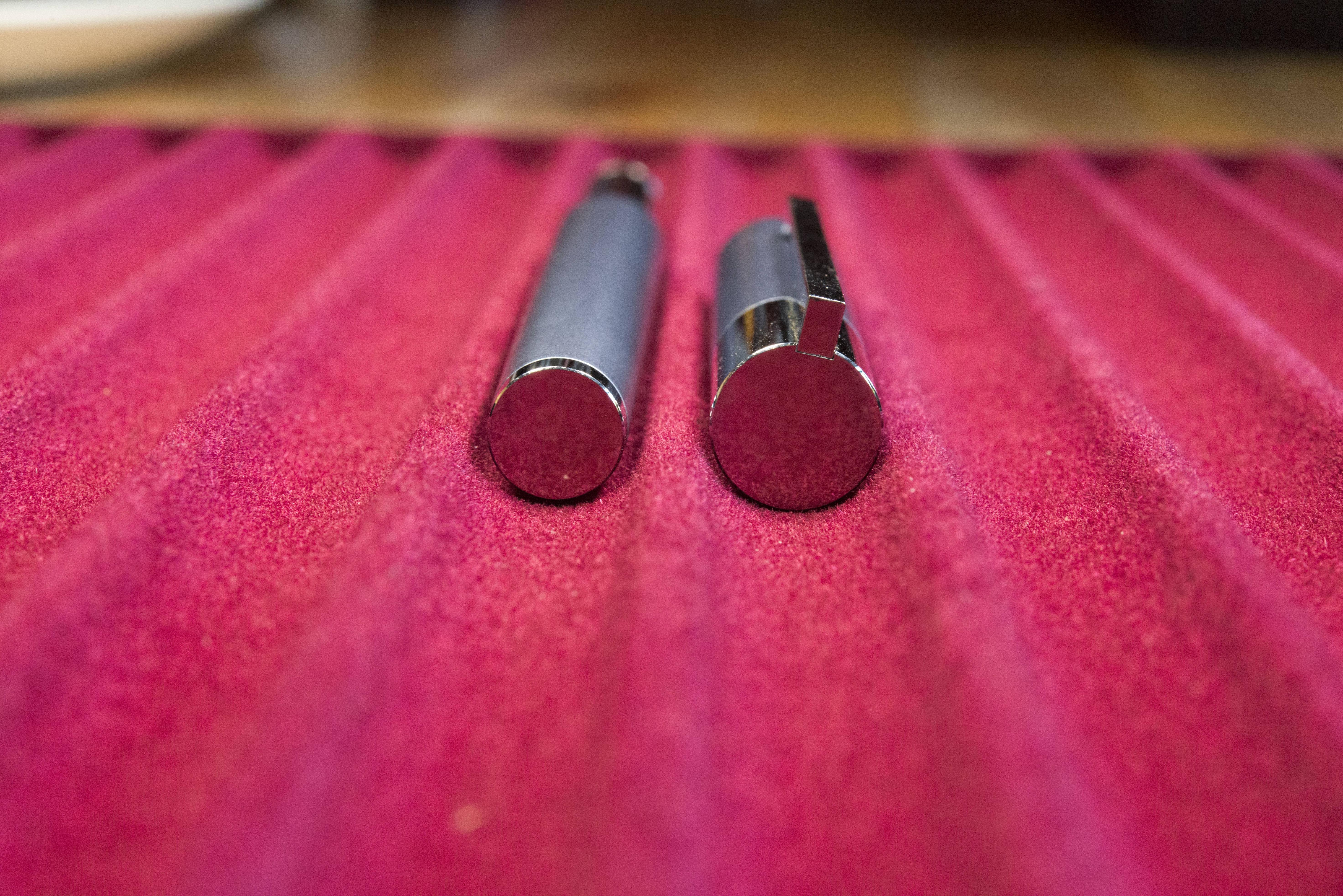 The barrel actually tapers very slightly from the top to the finial.  The grip more so, but still gently to a sudden ridge preventing the fingers from slipping on to the nib.  This is noticeable but not sharp.  The chromed grip is a finger print magnate.  I do not find it to be slippery, but passing the pen round others, some, presumably with sweatier/greasier fingers did.  None of us found the pen slipping backwards as we wrote, however, inferring the end ridge is more for appearance sake than safety.  I think it is the lighter tapering that helps prevent grip slippage when compared to the Lamy Studio, where this is more of an issue.  The barrel is quite weighty, made of steel with apparent brass threads.  The grip is also steel and the balance point appears to be half way down the barrel, which for me is just where it rests in the hook of my hand.  It makes for a very pleasant holding experience. 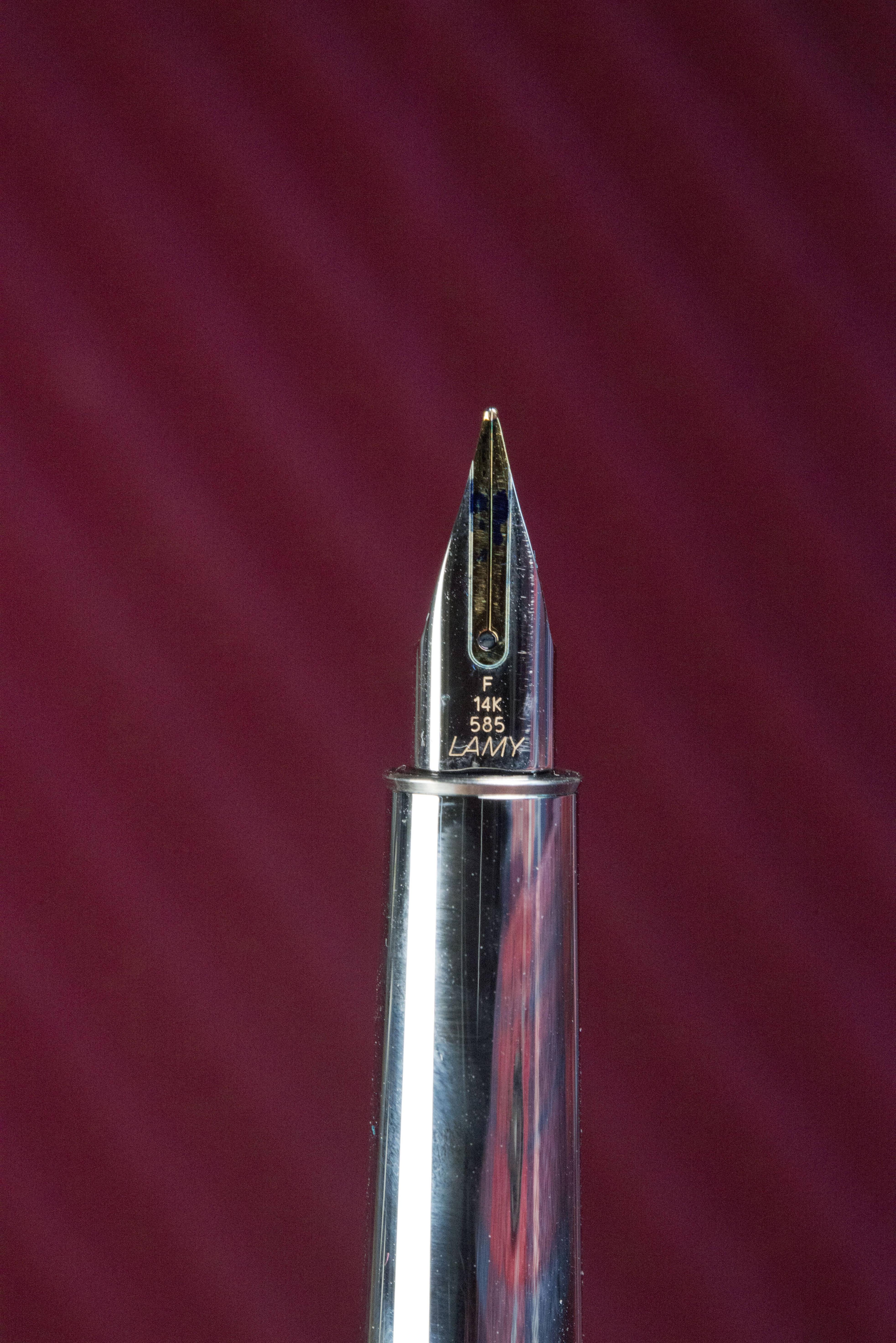 The cap is a straight tube with the finial part covering a quarter of the length.  It snaps on to the pen with a satisfying click.  The clip is a very clever design, appearing to being fixed to the rest of the chrome part, but is in fact spring hinged on the inside.  It has a firm, strong action, but not stiff, and works very well.  Securing the pen in a pocket poses no problems as the nub at the end of the clip slips over seems with ease, with the pen remaining secure.  The cap is quite heavy, being steel, and is lined with a plastic inner cap.  It seals the pen very well.  I’ve notice very little, if any, ink evaporation over time. 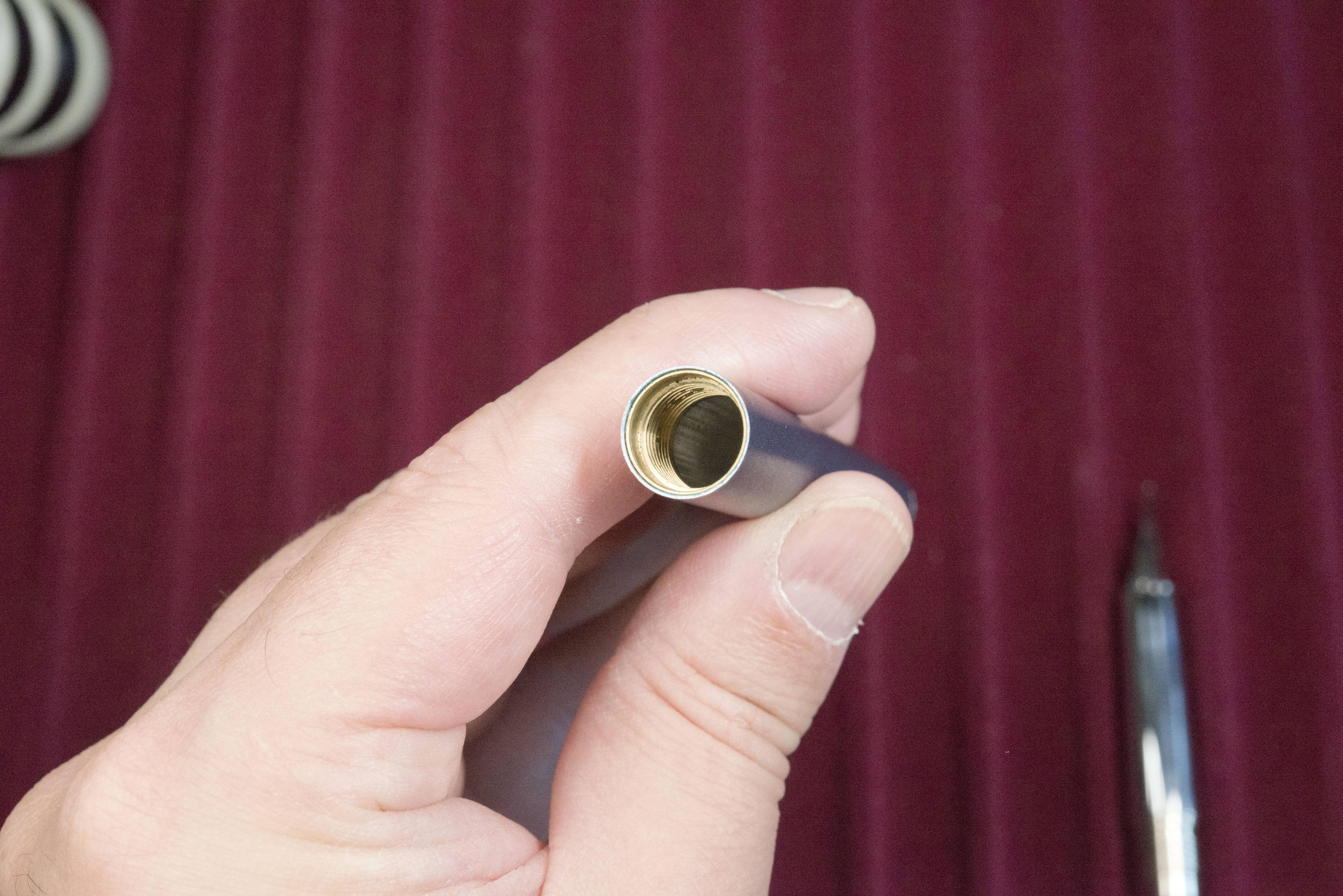 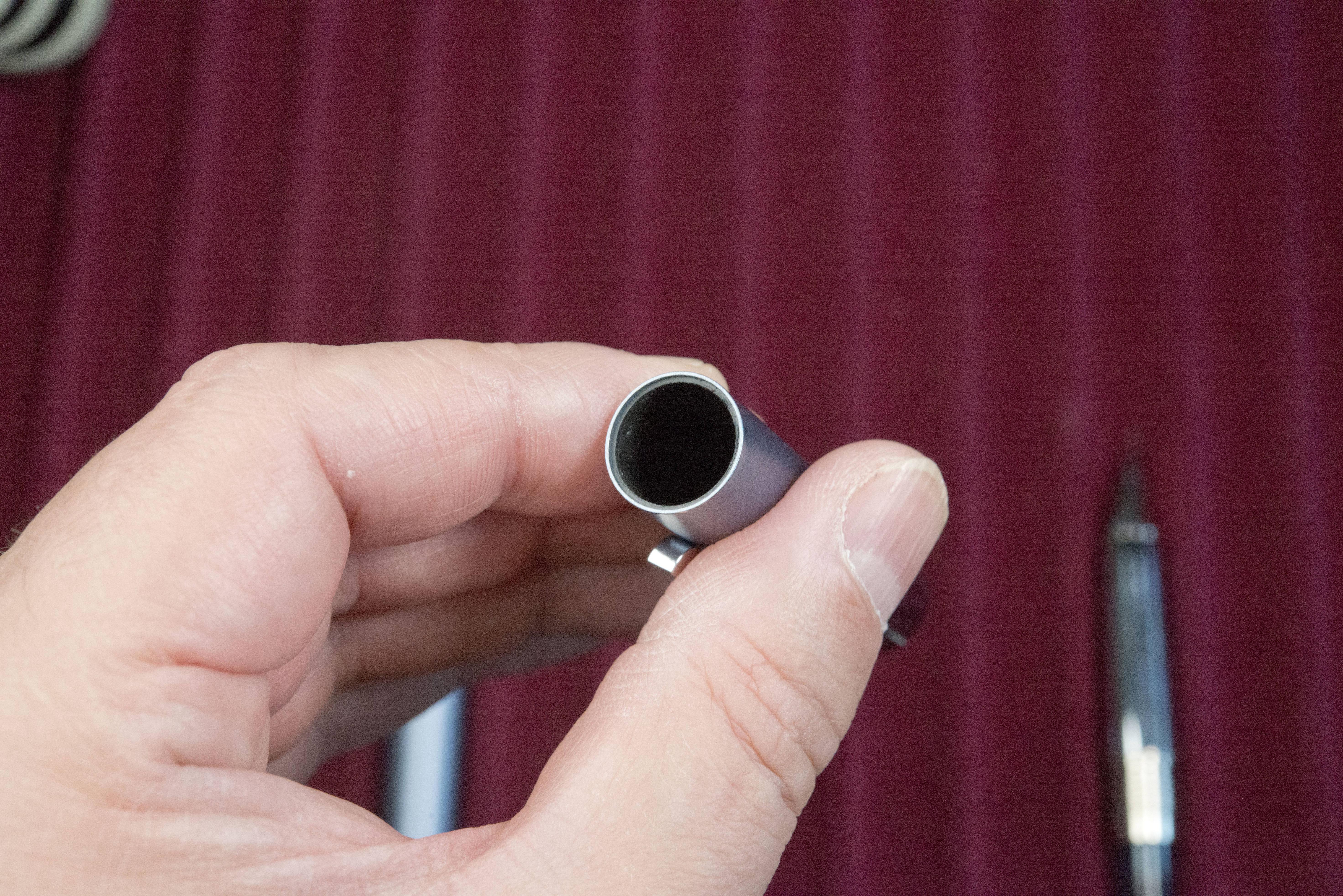 The pen can be posted, with the inner liner protecting the barrel from any scratching, however this does back weigh the pen.  For most this will not be an issue as the pen itself is quite long. 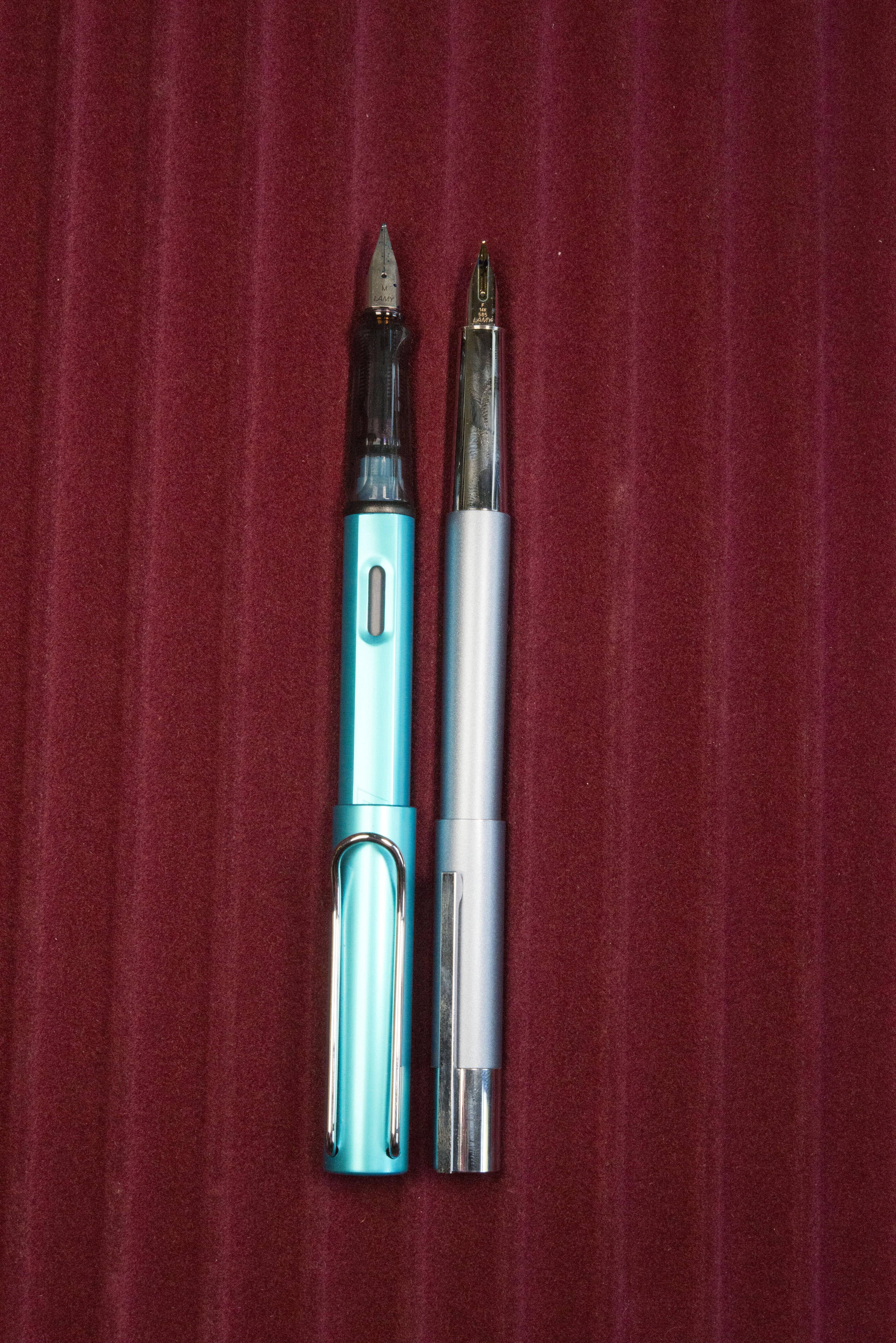 This was not my first Lamy pen with a gold nib, so I knew what to expect.  Disappointingly the tines were not quite aligned and needed a very slight adjustment.  Once fixed it proved to be a very sweet writer, being slightly soft, wet, and buttery smooth.  As a result this pen became my daily writer for over half a year, a long time for me, and I do prefer it both to the 2000 and my recently reviewed Accent. 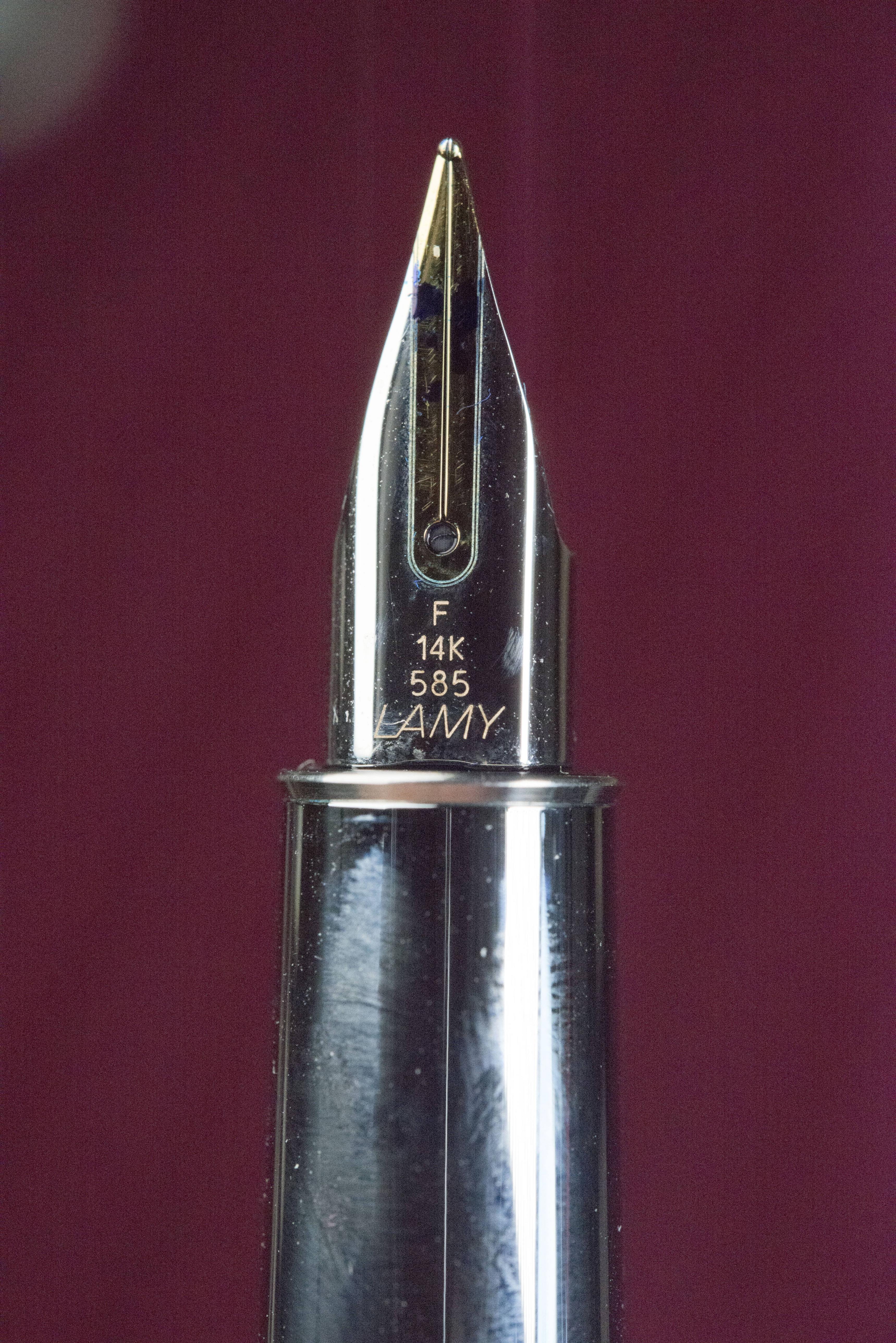 Note the line seen above is a reflection, on the grip, not a seem. 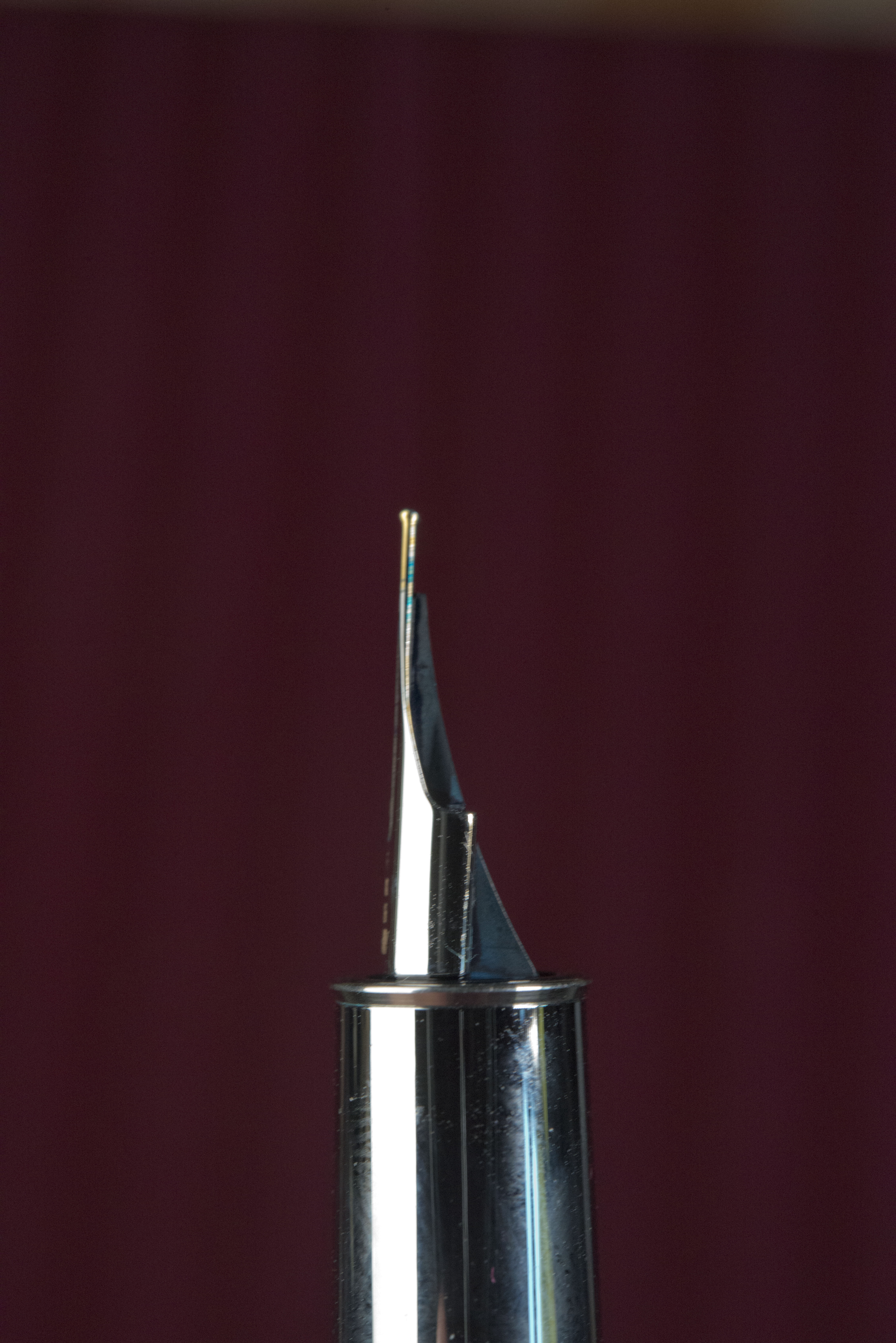 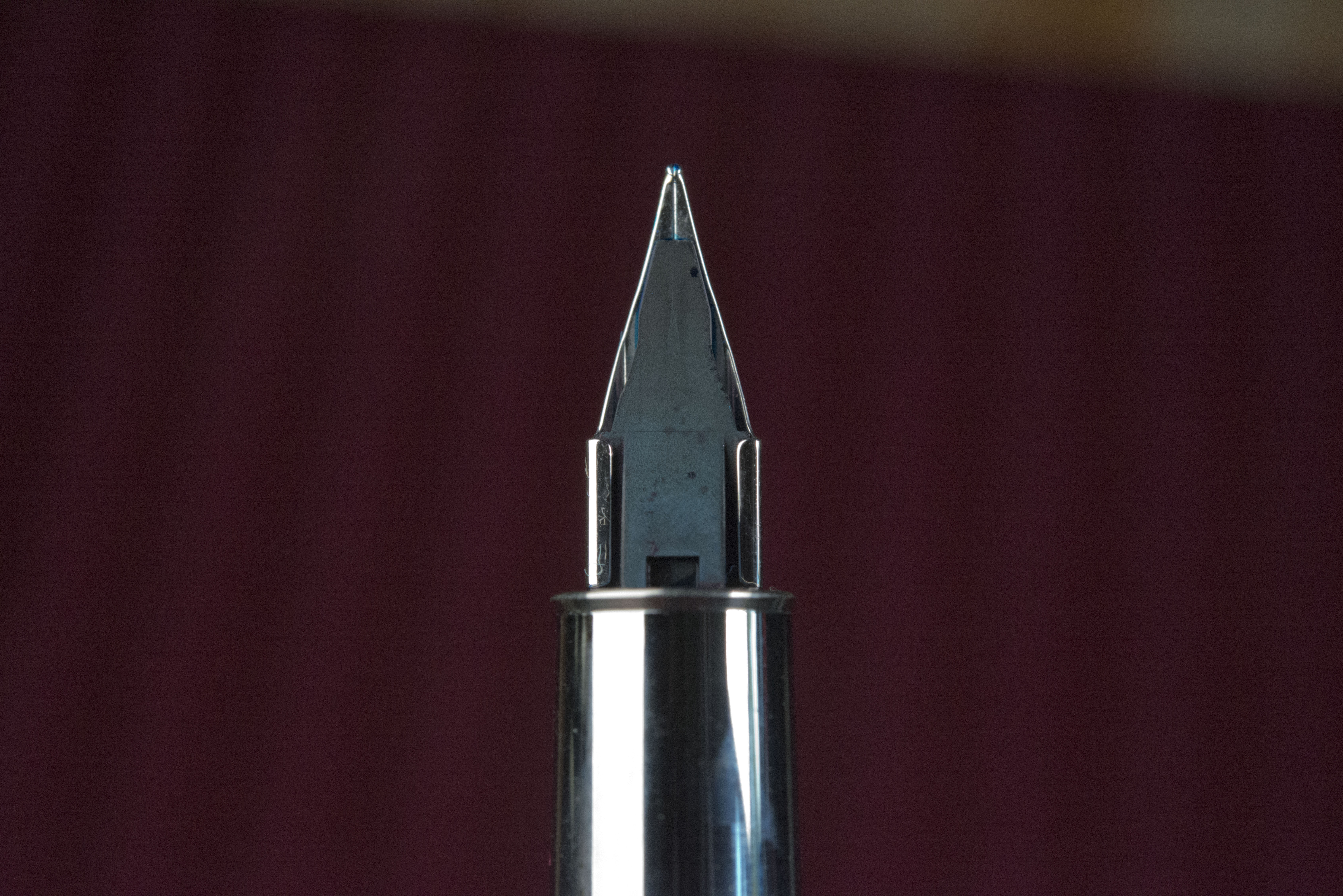 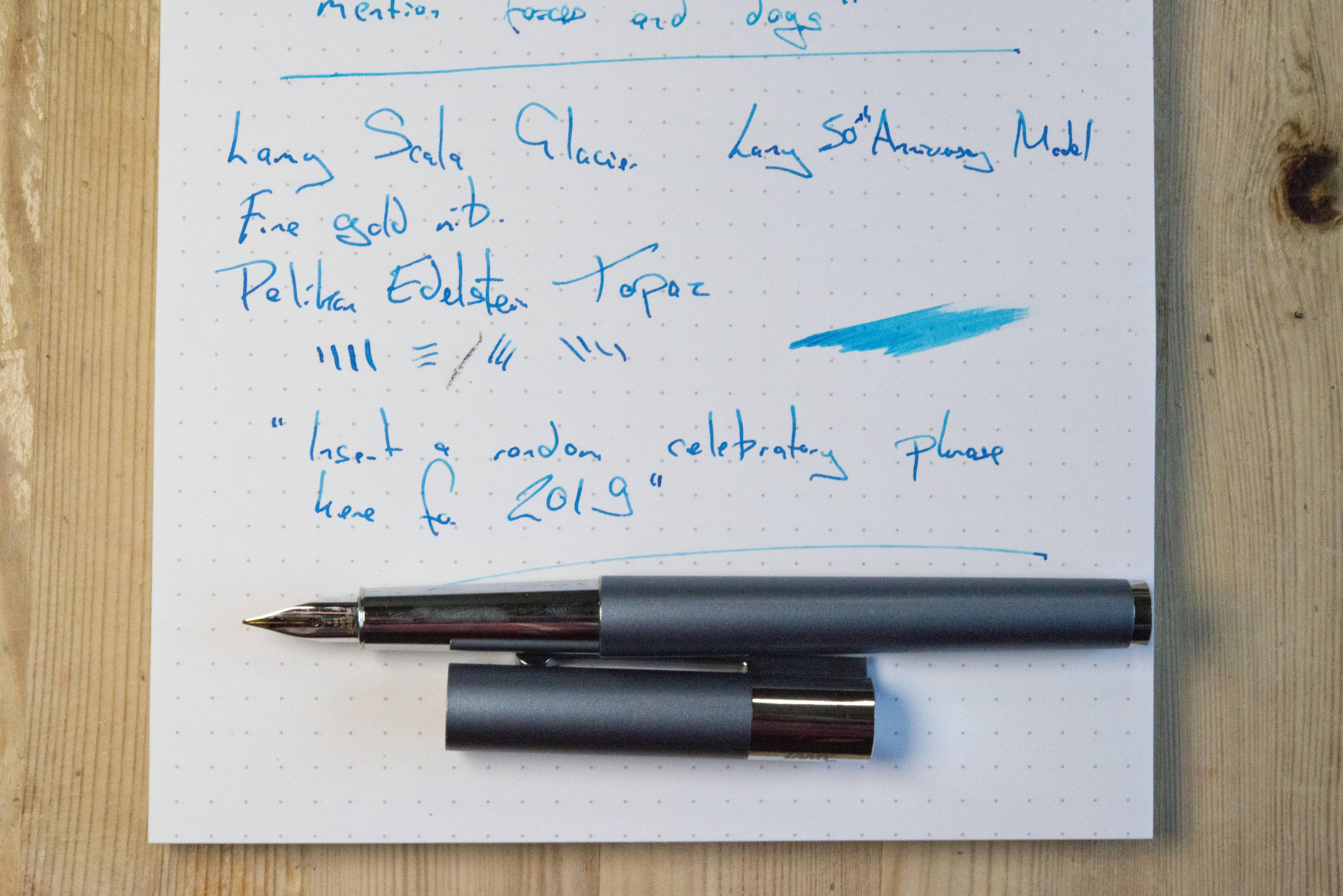 As with all Lamy fountain pens the Scala takes their propriety cartridges and converters. Most versions of the Scala come with both a blue cartridge and the converter. On this, and a number of the other special editions, only the converter is included, though a 50mm bottle of ink is also provided. 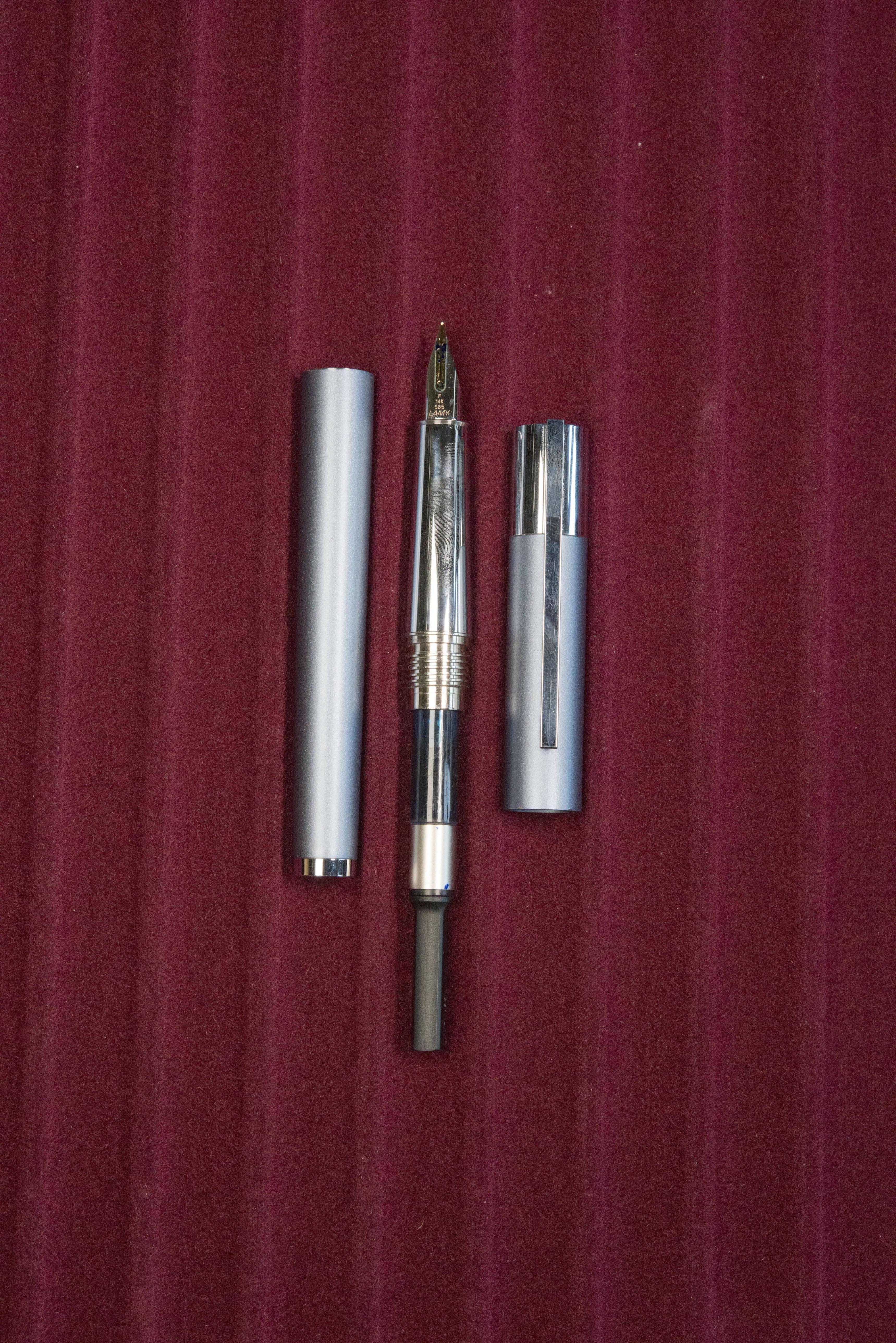 So my thoughts.  On the Scala itself.  I like it.  I actually much prefer the design to the Studio, which I consider to be somewhat generic.  I think it is a smart, comfortable to use pen, which also adds an element of style for those that care.  The chrome section I do not find to be a slippery issue, possibly due to its slight tapering compared to its peers.  At £75-85 for the standard version of the pen (which does actually include a converter) I’d certainly recommend it.  On the gold nibbed version.  There are a couple of special editions, as well as the occasional limited edition.  I would actually suggest the pen is better suited to the gold nib and certainly should be considered by anyone looking for a first/cheaper pen with a gold nib.  Some readers may consider this controversial, but even at the additional cost I would recommend this pen over a Platinum Century 3776.  On this specific model.  It was overpriced when it came out, but deals became quite common and I picked mine up for less than the cost of other gold nibbed Scalas during the anniversary year.  I think, from my perspective, what sums up this pen is the fact I find myself, having taken the photos and done the writing sample, considering adding back in to my daily carry.  Additionally I would consider another one at some point, probably a limited edition as Lamy appear to have added the Scala to the list of pens with an annual edition. 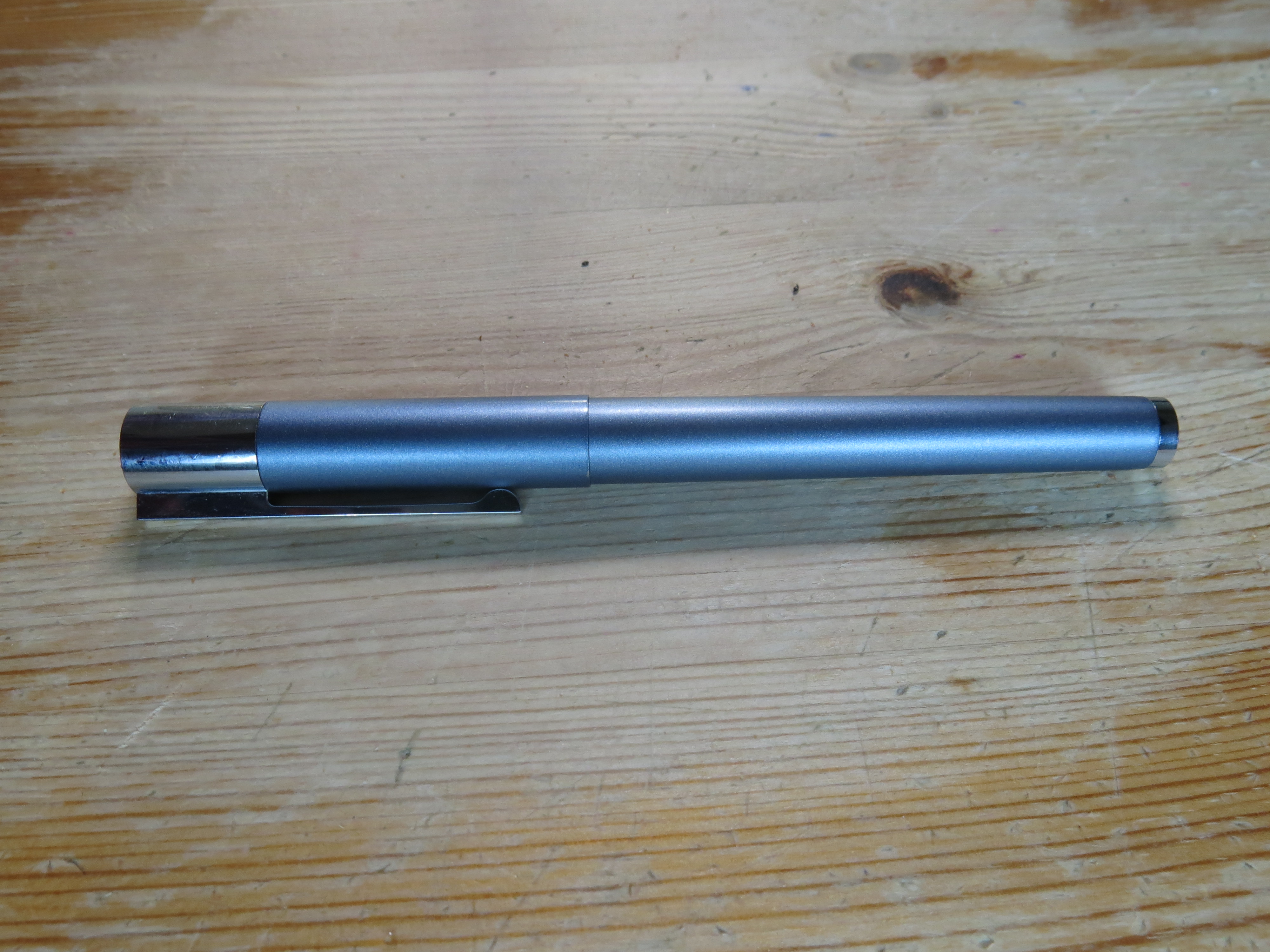 Note this pen was purchased by myself with my own money. The specific model is no longer available (outside of certain Internet auction sites).  The writing example used Pelikan Edelstein Topaz ink and 80 g/m A5 Rhodia paper.