When is a Dolcevita not a Dolcevita, when it’s a Frederico, or is it?  Towards the end of Delta, in 2014, a range of ‘cut price’ pens was offered through a partner site, Martemodena, both direct from their website and through certain auction platforms.  Visually these were very similar to the originals, so how was the price brought down?  In the last eight months I’ve been fortunate to pick up the stantuffo (piston filler) version of both the Dolcevita and the Dolcevita Frederico allowing me to compare.

My Delta Dolcevita Oro Stantuffo came first, being purchased from St John’s Pens at the October 2019 London Pen Show.  The Frederico came later in February from a buy & sell group on Facebook.  The previous owner was selling four, each a different finish.  Originally I was going to get the pure Oro version to match my existing Delta but worried that parts may become mixed up, so I went for one with the orange crush body and white cap, section and blind cap.  Of course in hindsight I could have gone for my first choice with no risk, but more on that as this post proceeds.

One thing, I’m not going to look at or discuss the relationship between Delta and Martemodena.  There was much speculation at the time of Delta closing, and many a conspiracy theory was declared.  I will mention that at that time the reputation for build quality of the Dolcevita Fredericos was not great, but then I believe the same was also said for the regular Delta pens.

From here on in I will be referring to the ‘original’ Dolcevita as the DV and the Dolcevita Frederico as the DF. 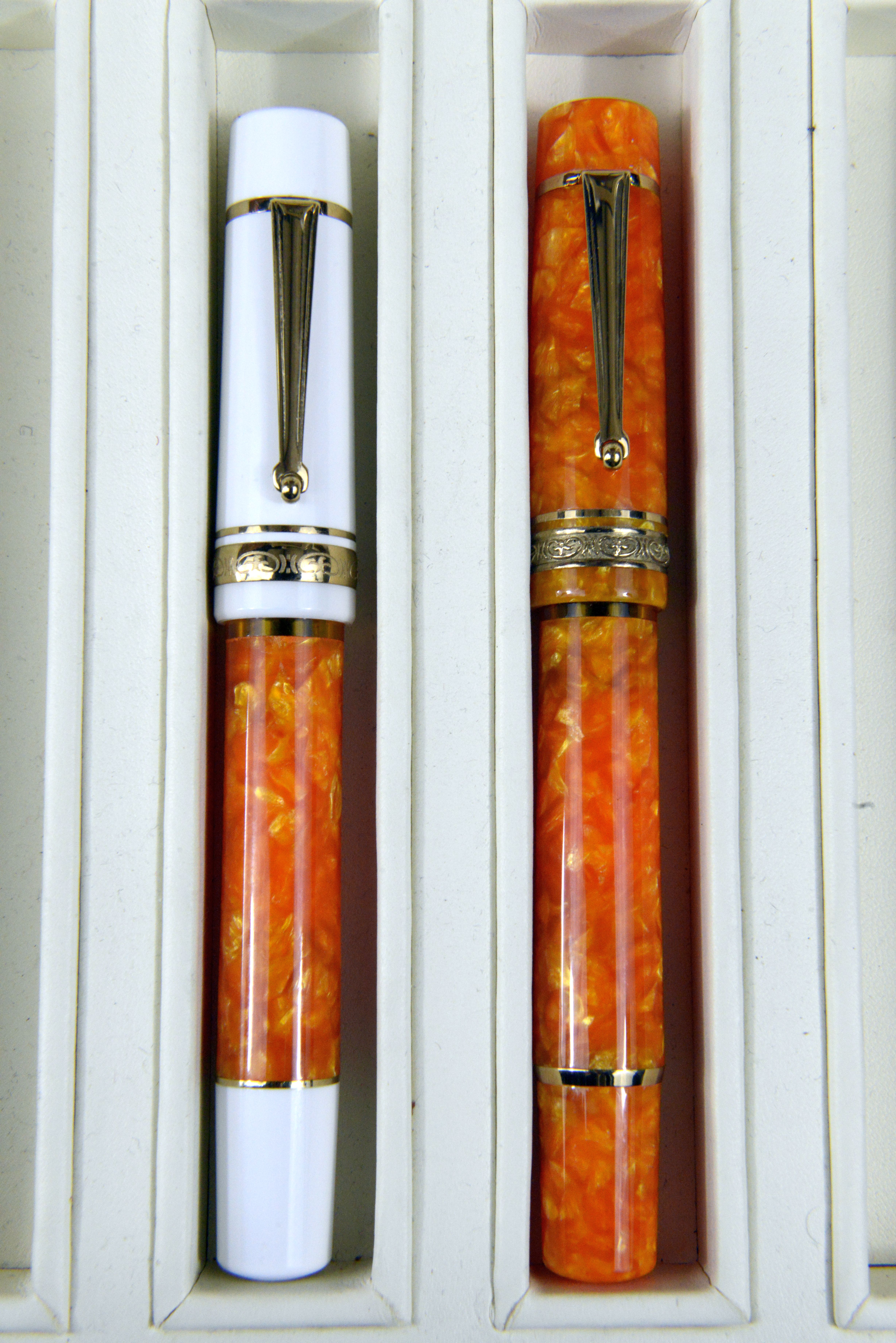 Looking at the pens side to side they initially appear to be very similar with the DF being ever so slightly shorter, though of a similar width. 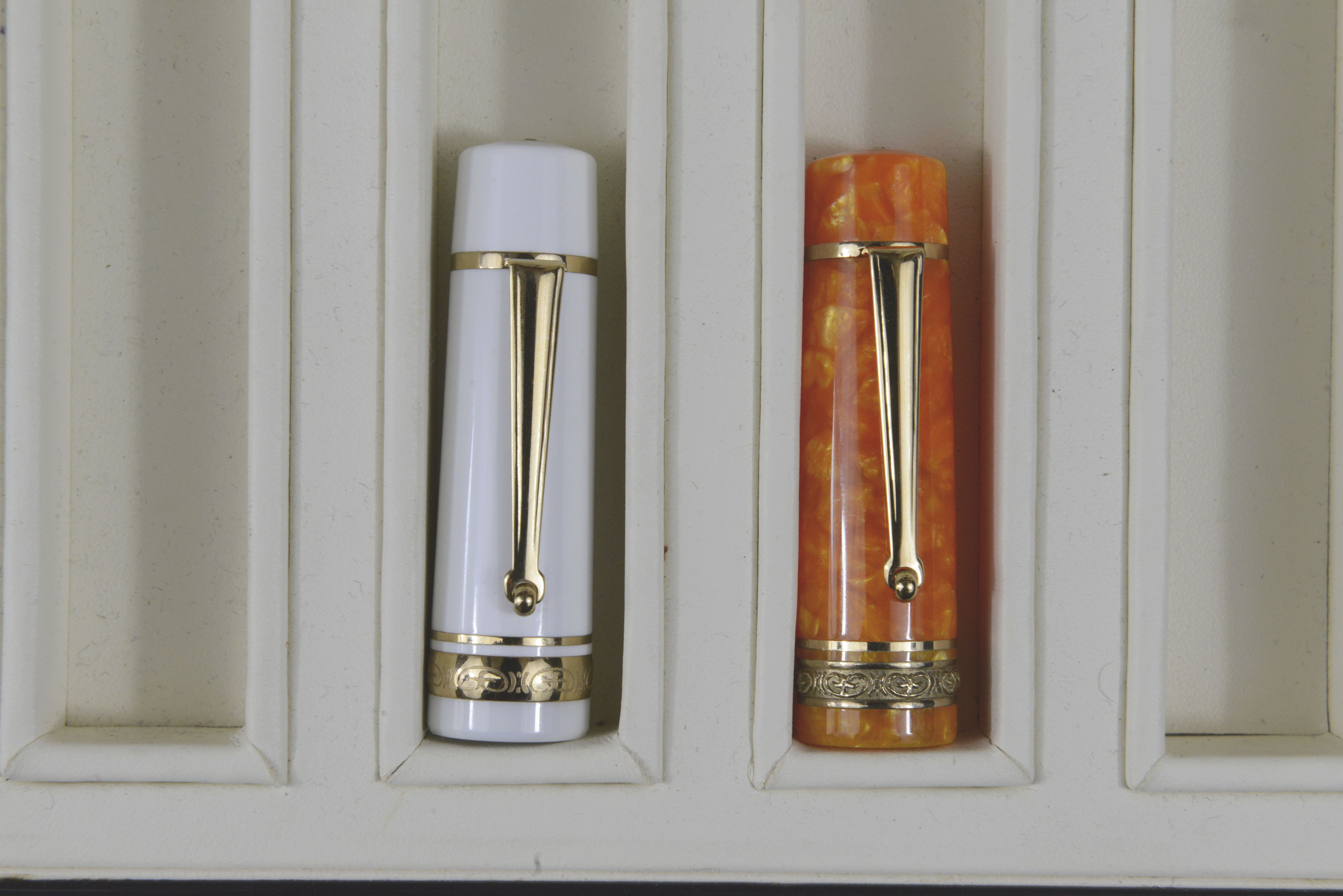 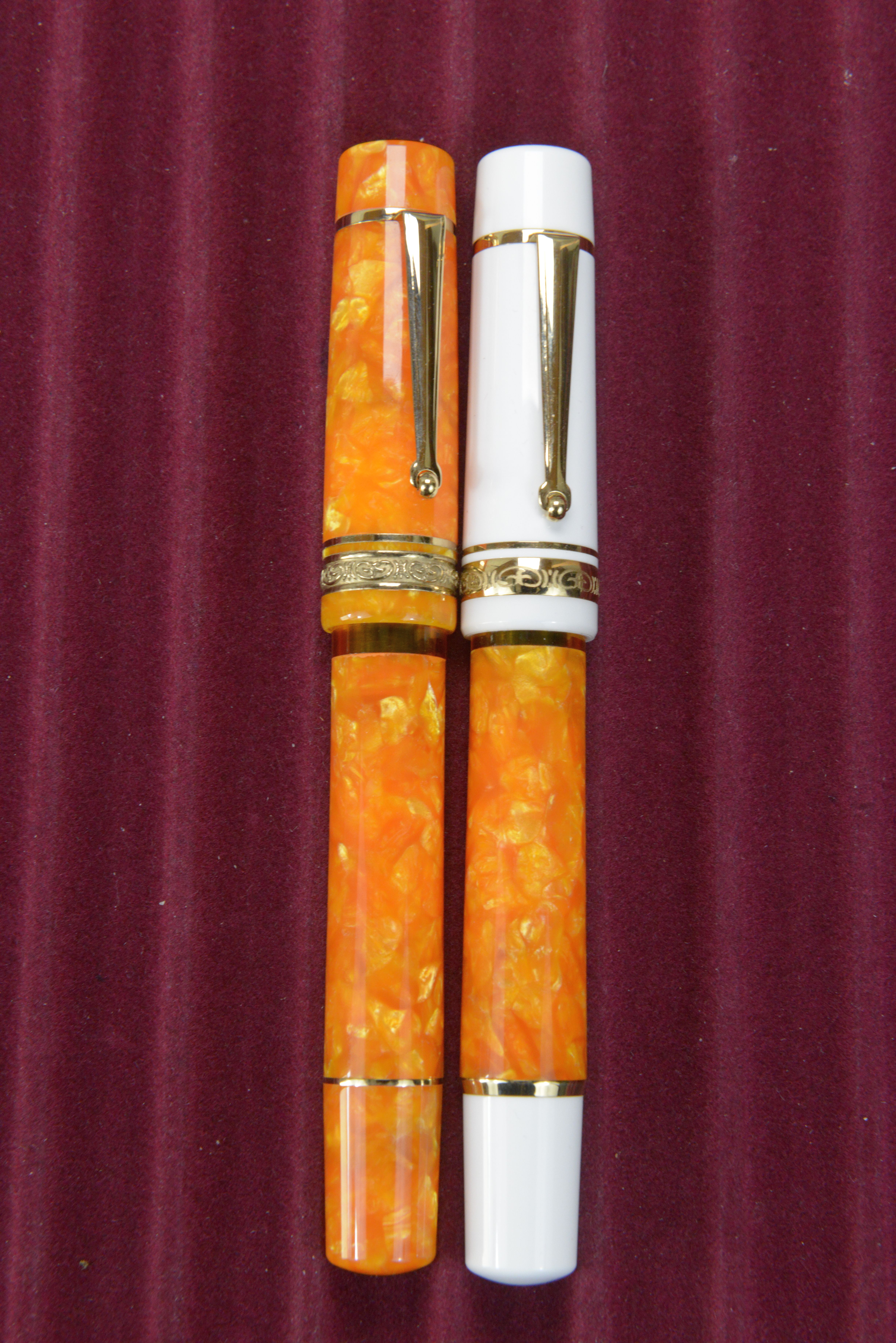 Here the cap and blind cap have been swapped across. 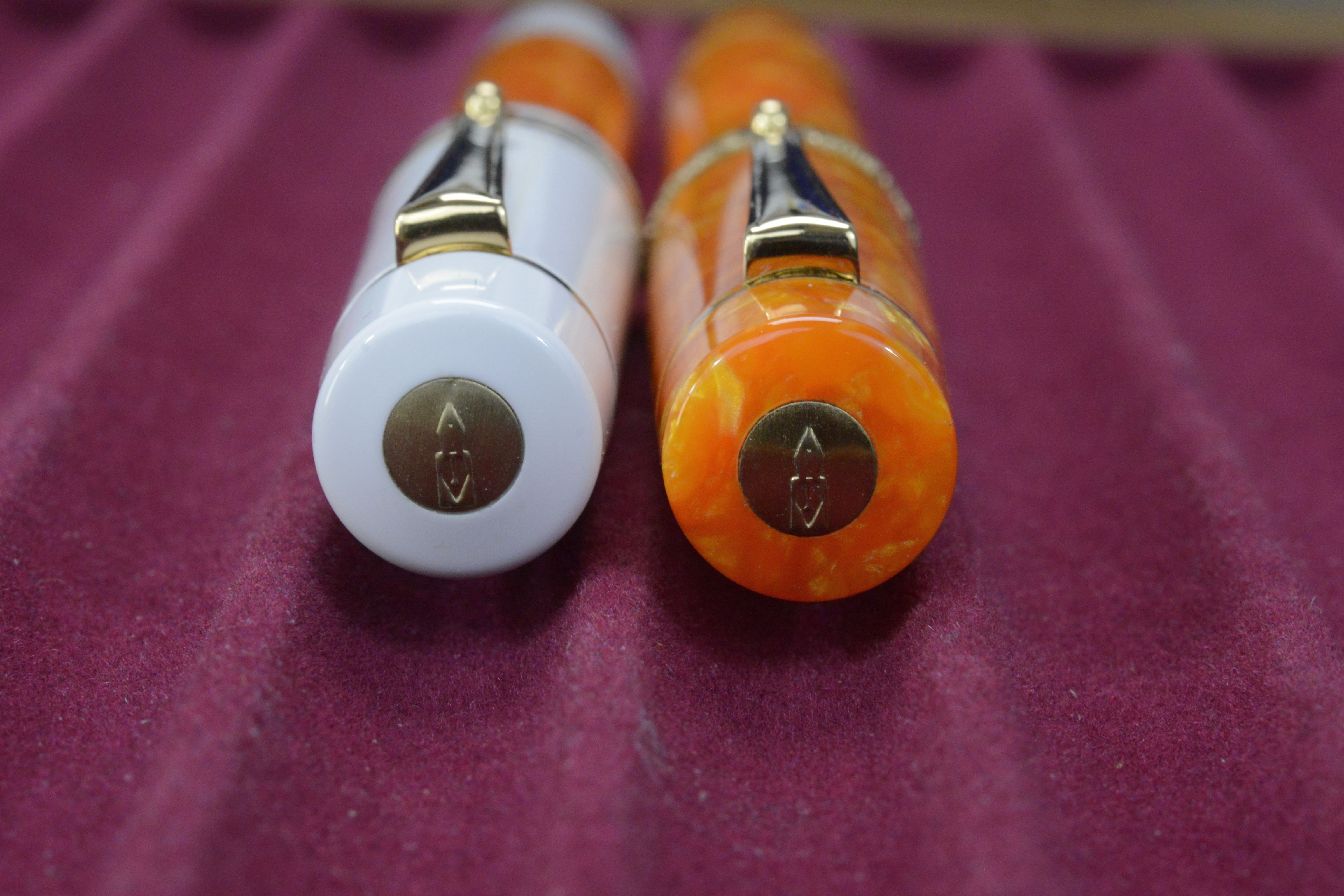 The caps are near identical in size and in fact that be switched between pens.  A couple of things I did note was there is a certain thread combination on the DF that fails with the cap barely on, resulting in the need to rotate the cap or body and try again.  The other thing is the reverse quality wise.  The cap on the DV also screws slightly further on than the DF, meaning less of the ink window is left visible.  I do wonder if this is actually down to the problems with the threads on this DF rather than by design.  Interestingly the DF cap actually appears to seal the pen better than on the DV as the latter does suffer from noticeable ink evaporation over the same period of time.

The clips appear to be identical though on the DF it sits lower than on the DV.  I prefer it on the latter as the cap finial is shorter and the distance between the end roller and the first band is the same (or at least very similar) as the gap between the lower band and the cap end.  Proportionally it just works better. 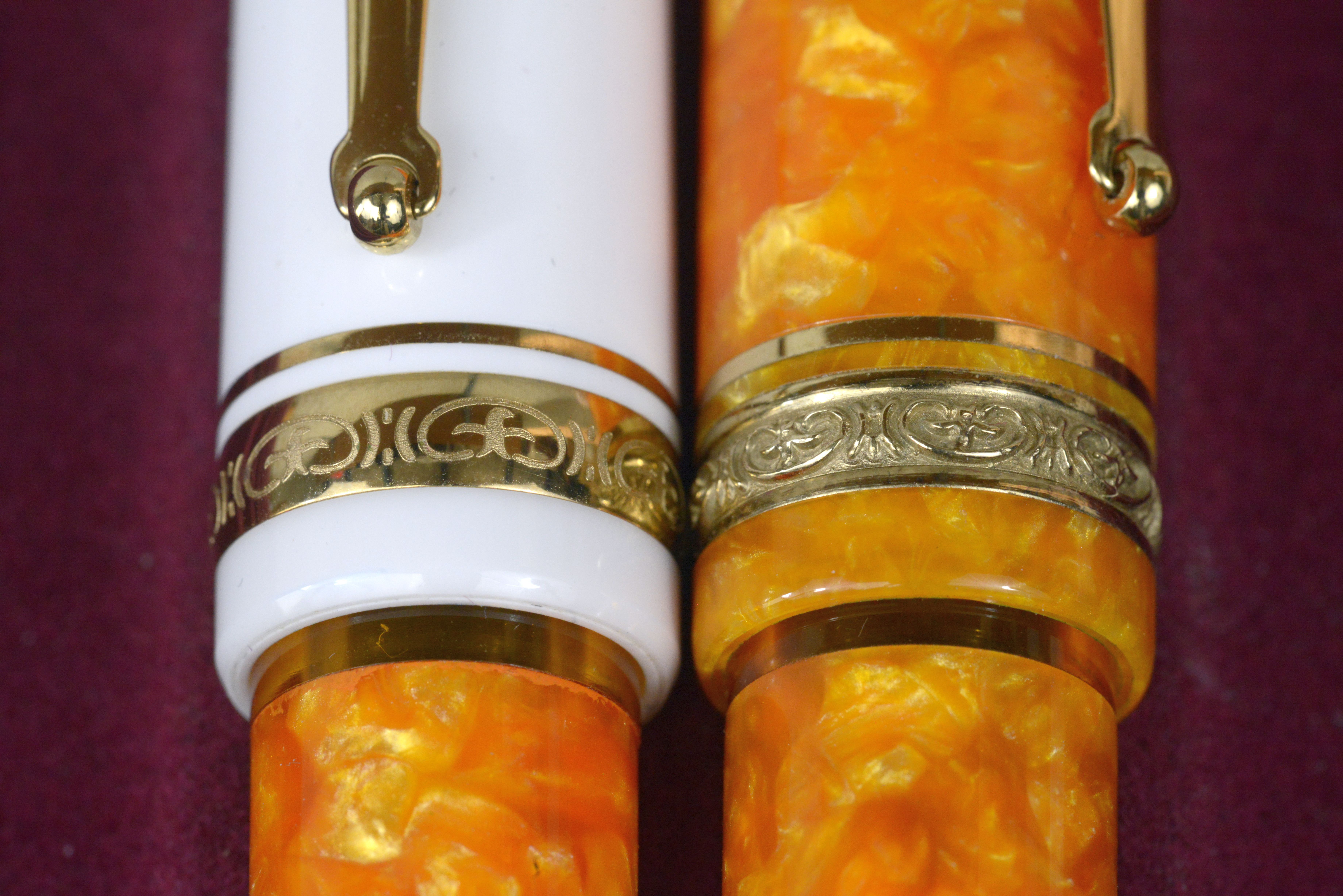 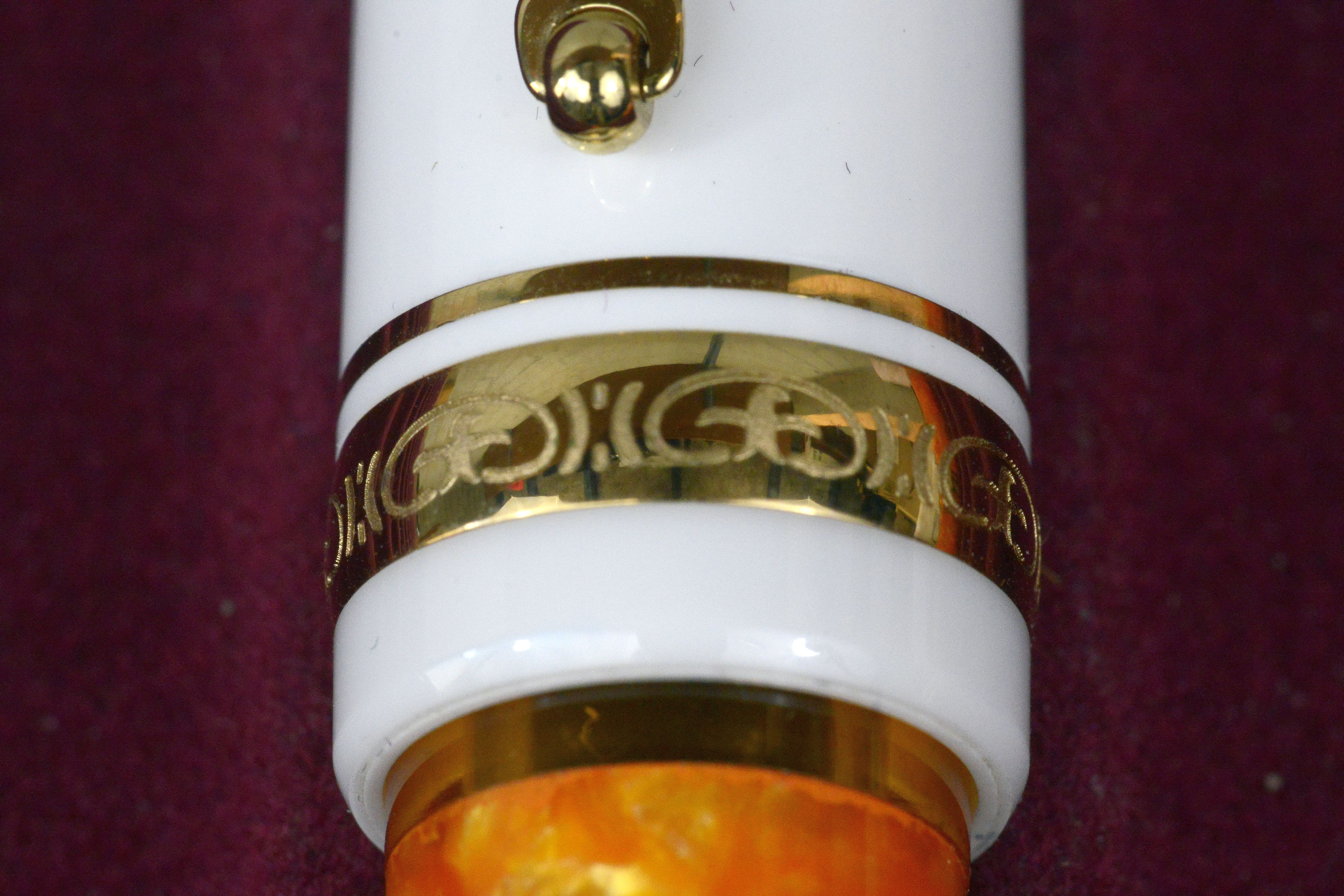 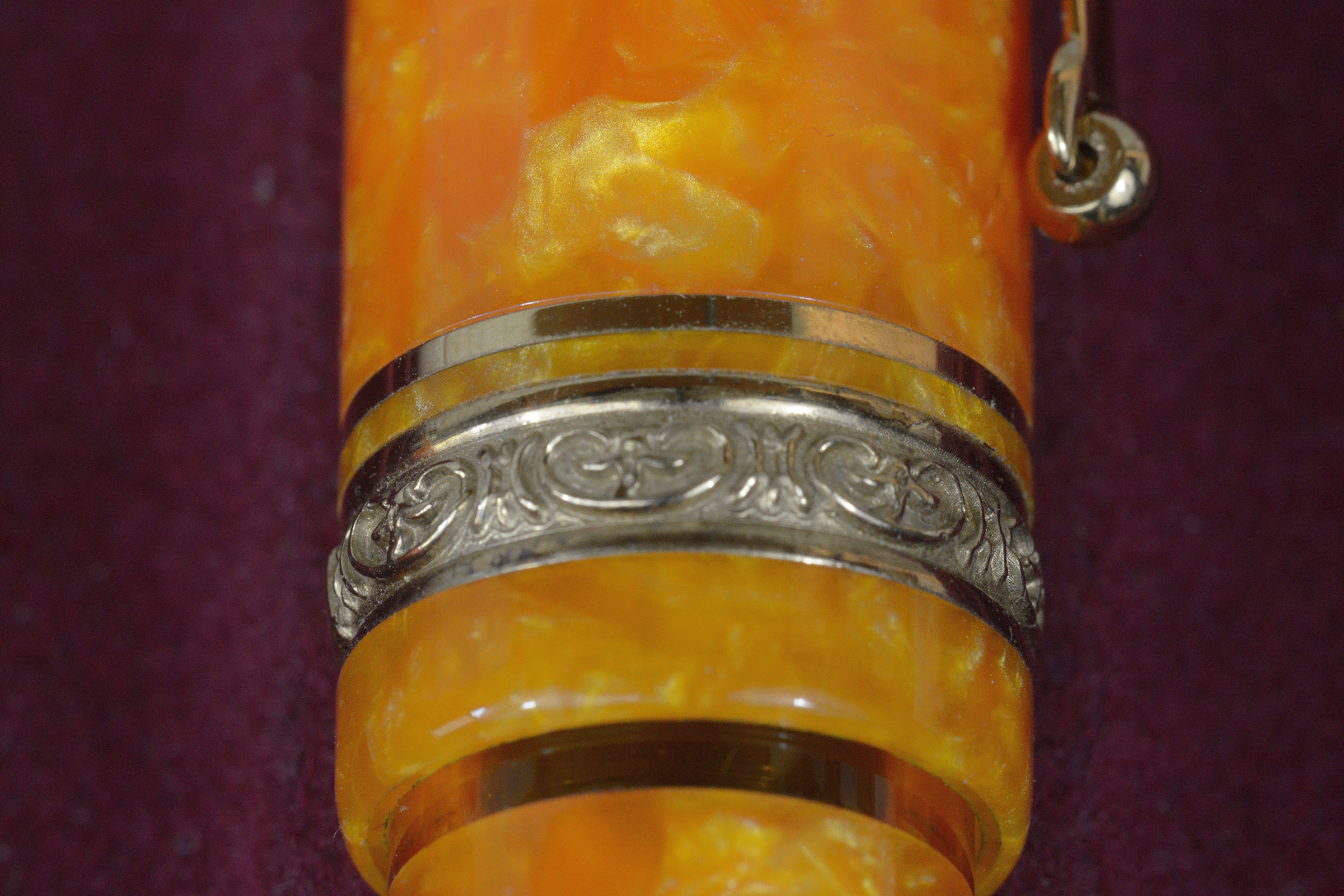 The stamped maker and version markings I will skip over, however the big rings and cap finial disk do differ.  On the DV they are vermeil, sterling silver gilded with gold, and the markings are engraved.  On the DF they are just gold plated ‘metal’ with the markings being laser etched. 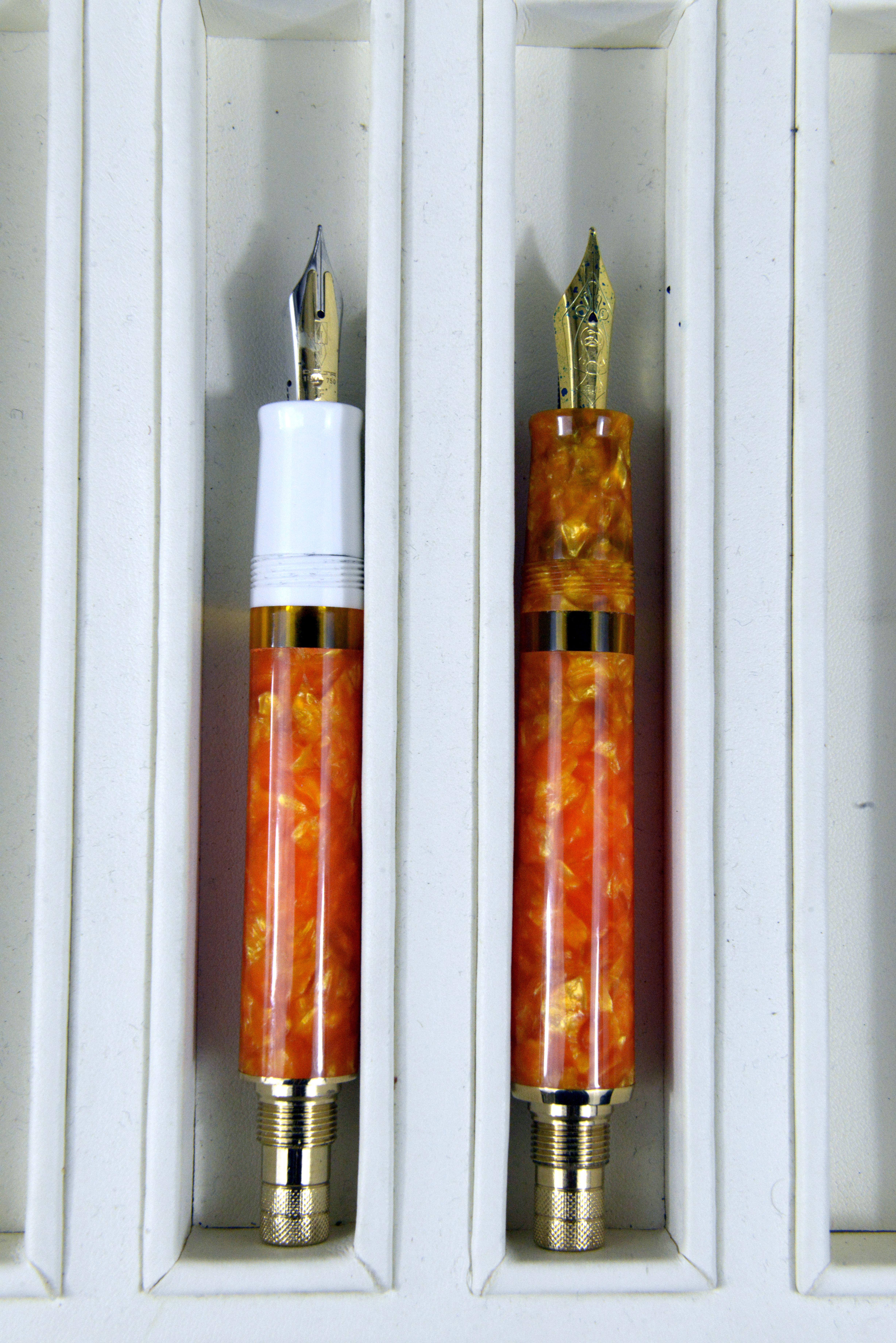 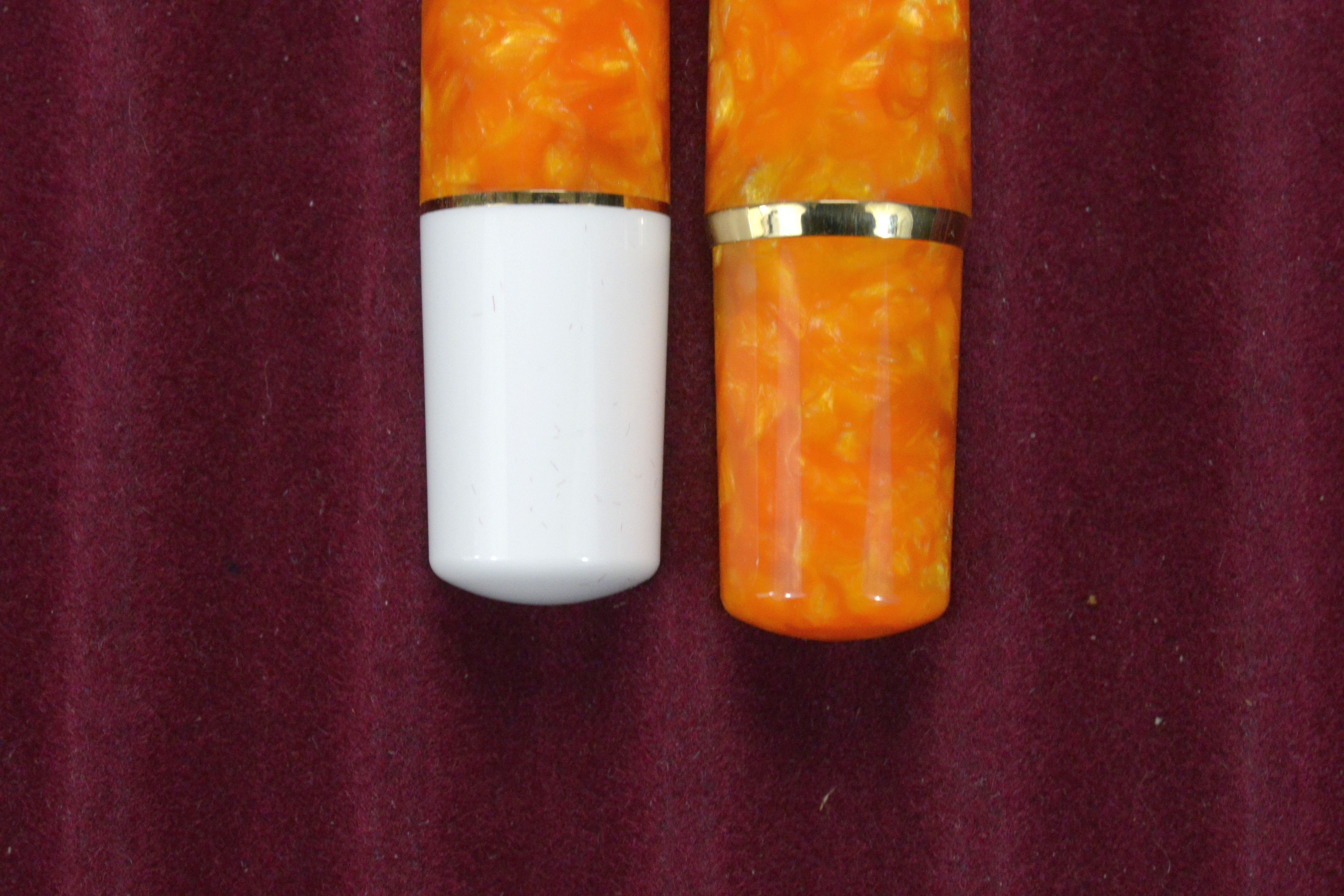 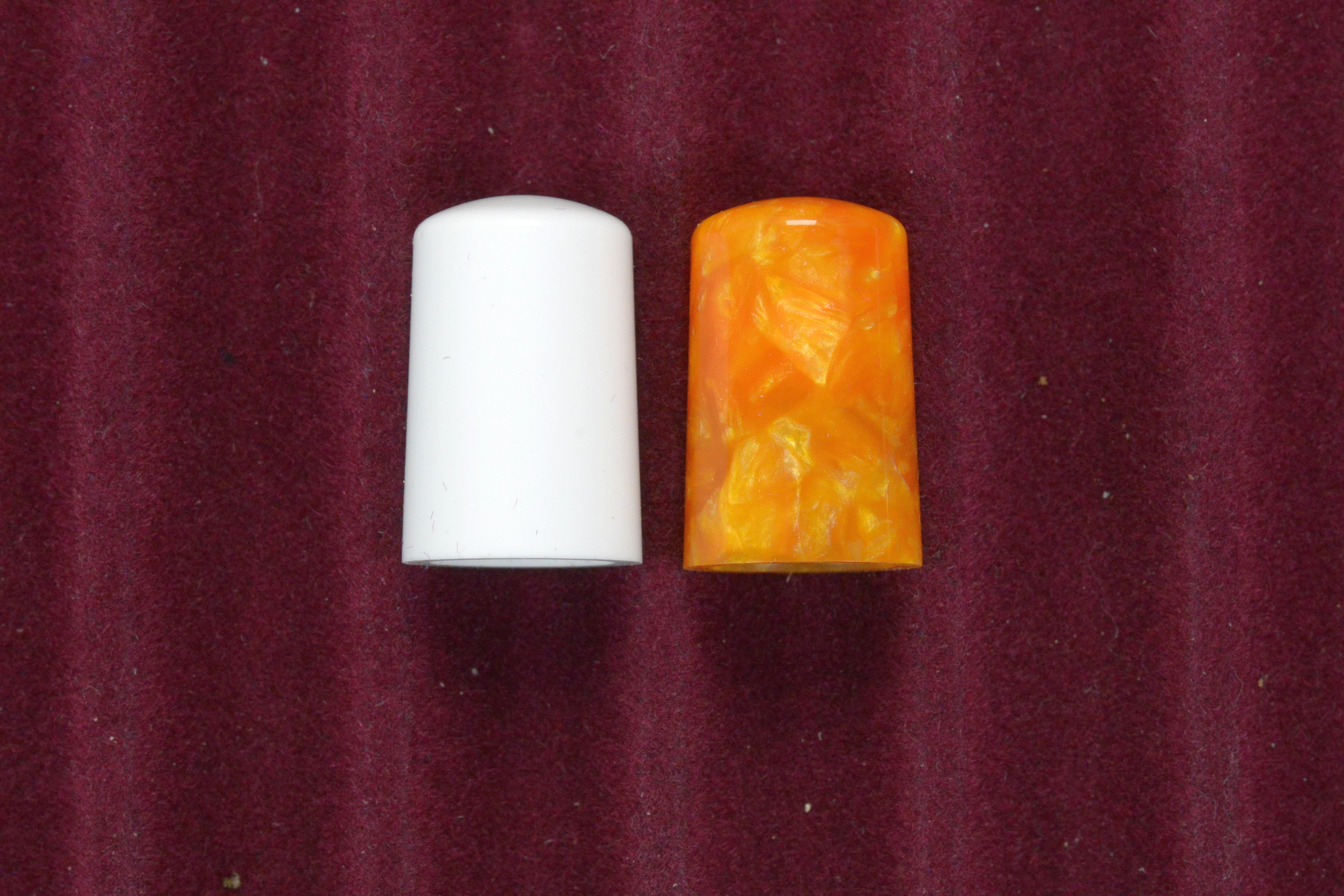 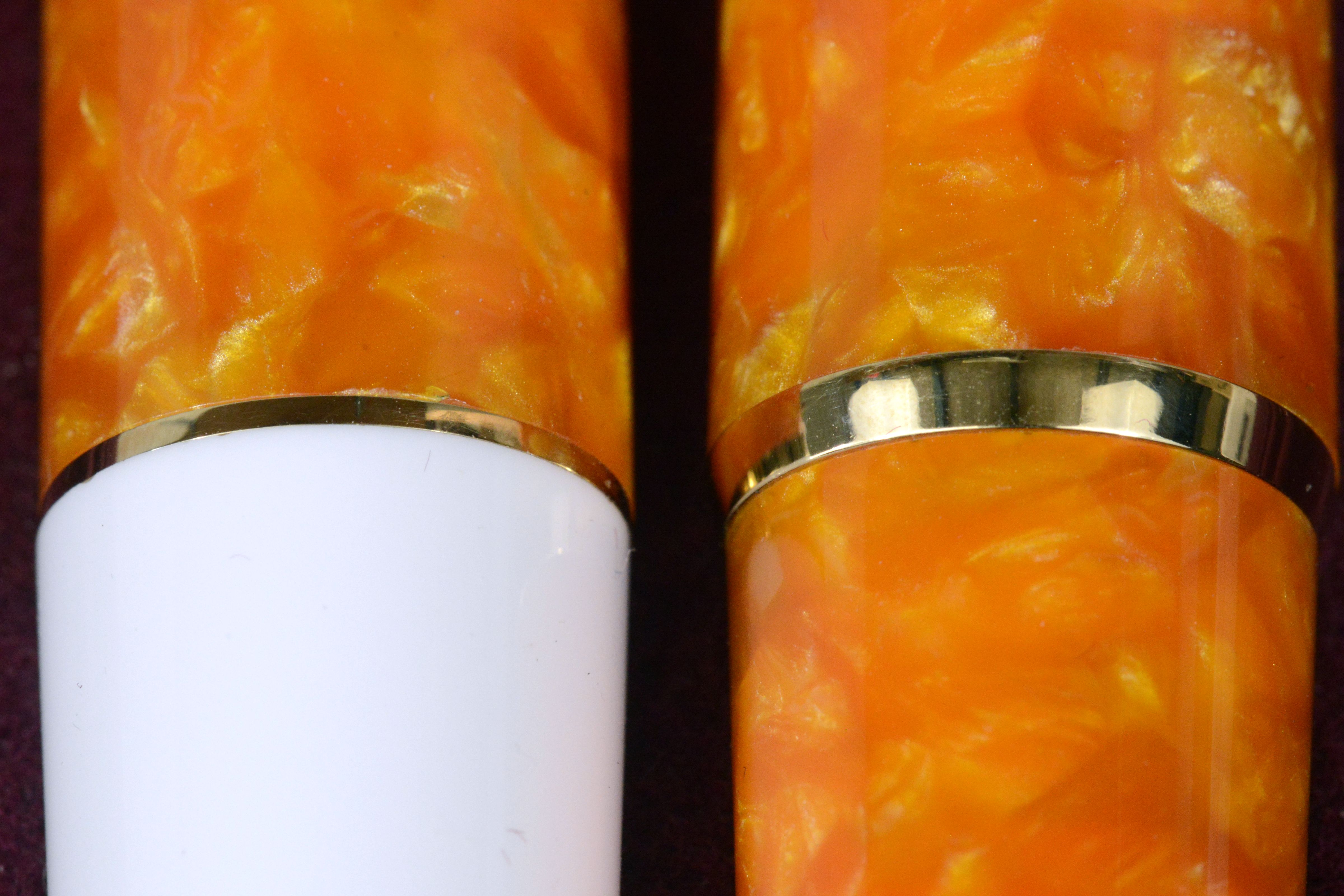 Uncapped the size difference is at the bottom.  The blind cap on the DV is same size as on the DF, however the decorative ring is larger.  This is partly due to the barrel on the DV actually being angled out so it is slightly fatter at the bottom to the section end, where as on the DF it is straight and the same width as the DV by the ink window.  Additionally the ring on the DV is wider, tapering down towards the piston winder.  The blind caps can be swapped between pens with no problems. 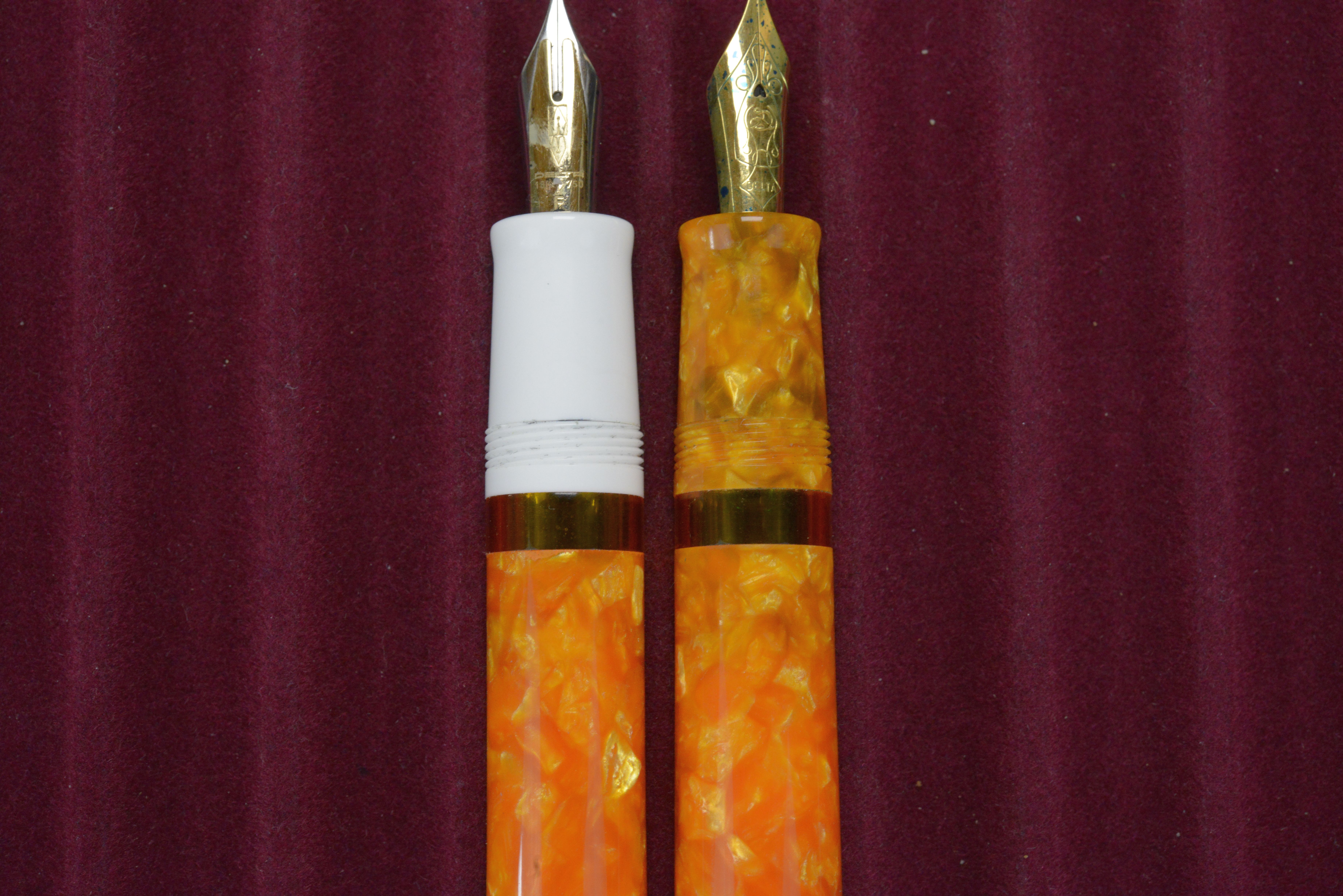 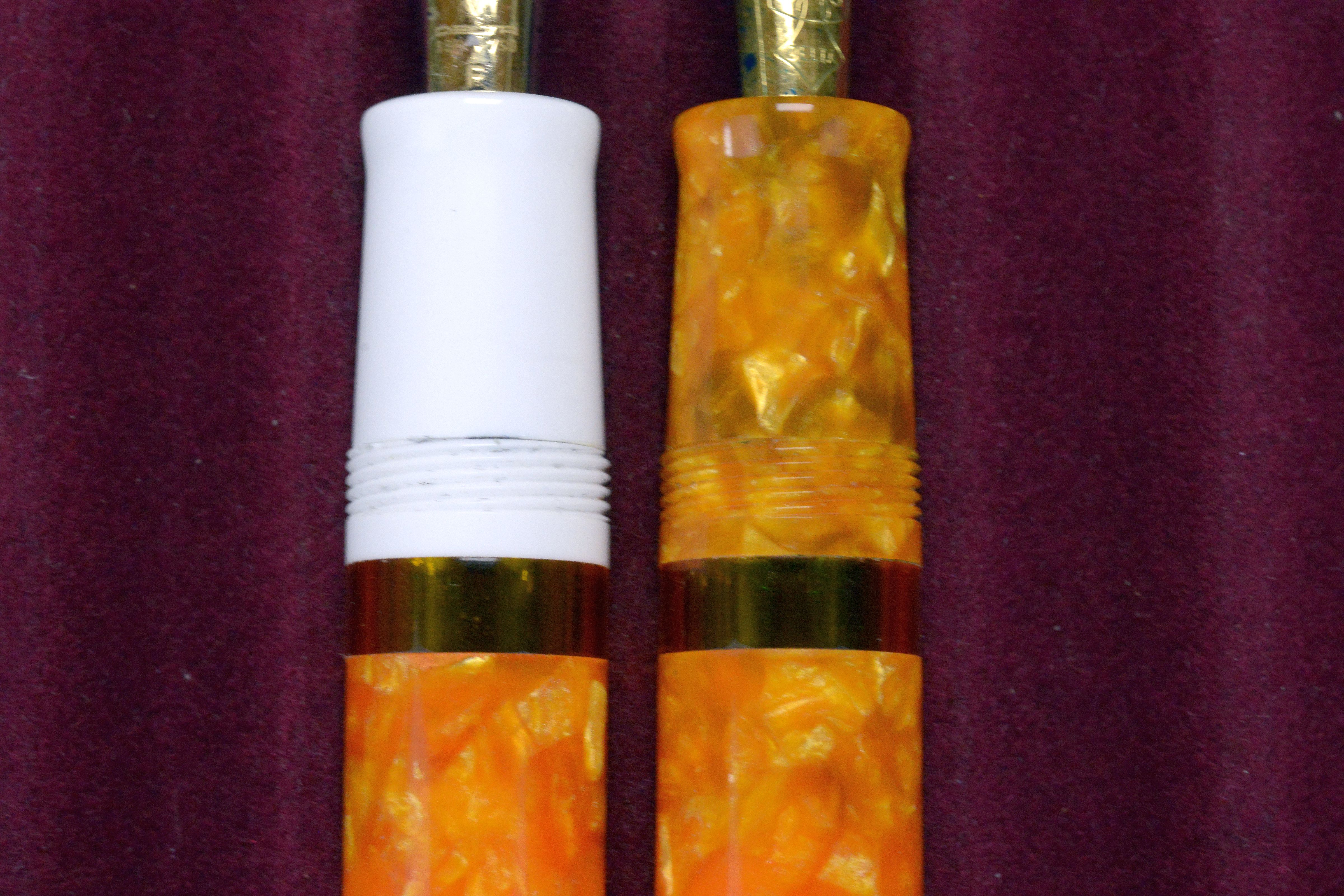 The sections look like they are of the same design and dimensions, which would make sense, as this helps bring the manufacturing costs down, as are the ink window and barrel.  With the latter being of the same appearance on the two pens they do look like the same material, though side by side the DV is longer with the ring by the piston knob on the DF actually finishing at the same length as it starts on the DV.  What is not obvious at first is the DV barrel actually fattens out gradually, where as the DF it is straight.  Once you know this it is quite obvious. 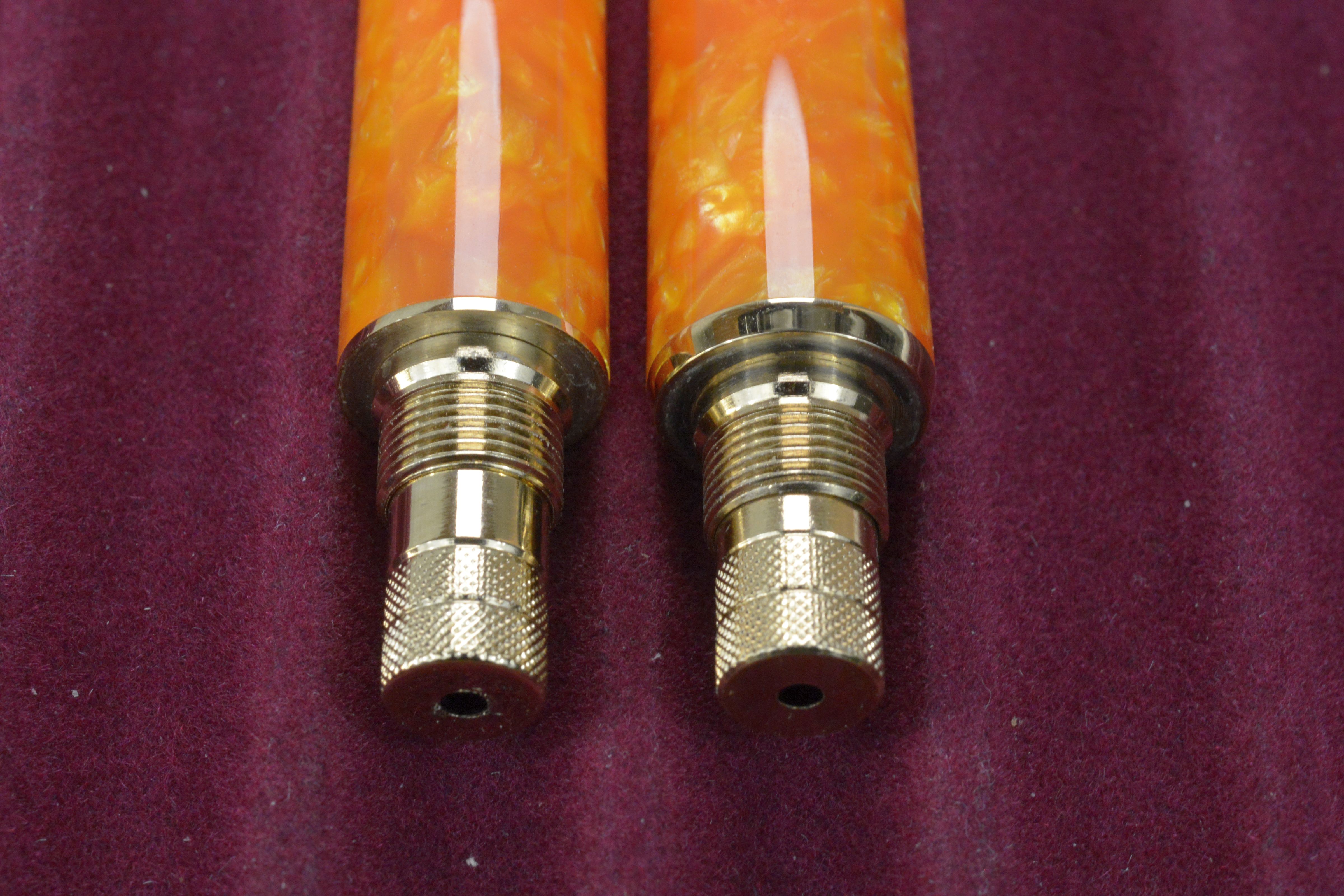 Both pens are Stantuffo models, piston fillers, and the mechanism is the same in both pens, which is a good thing as it’s one thing I think Delta implemented well with its ratchet to stop over-tightening. 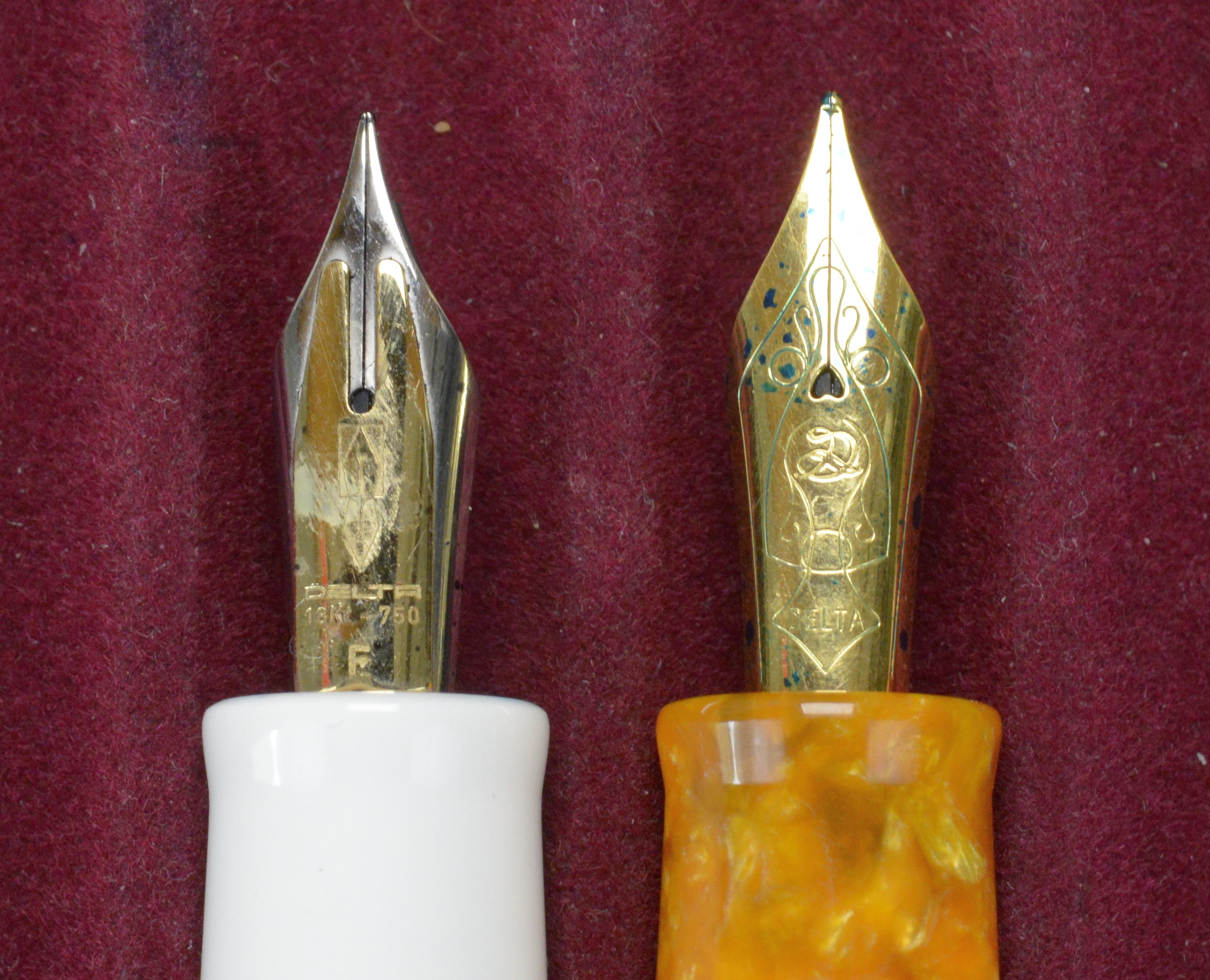 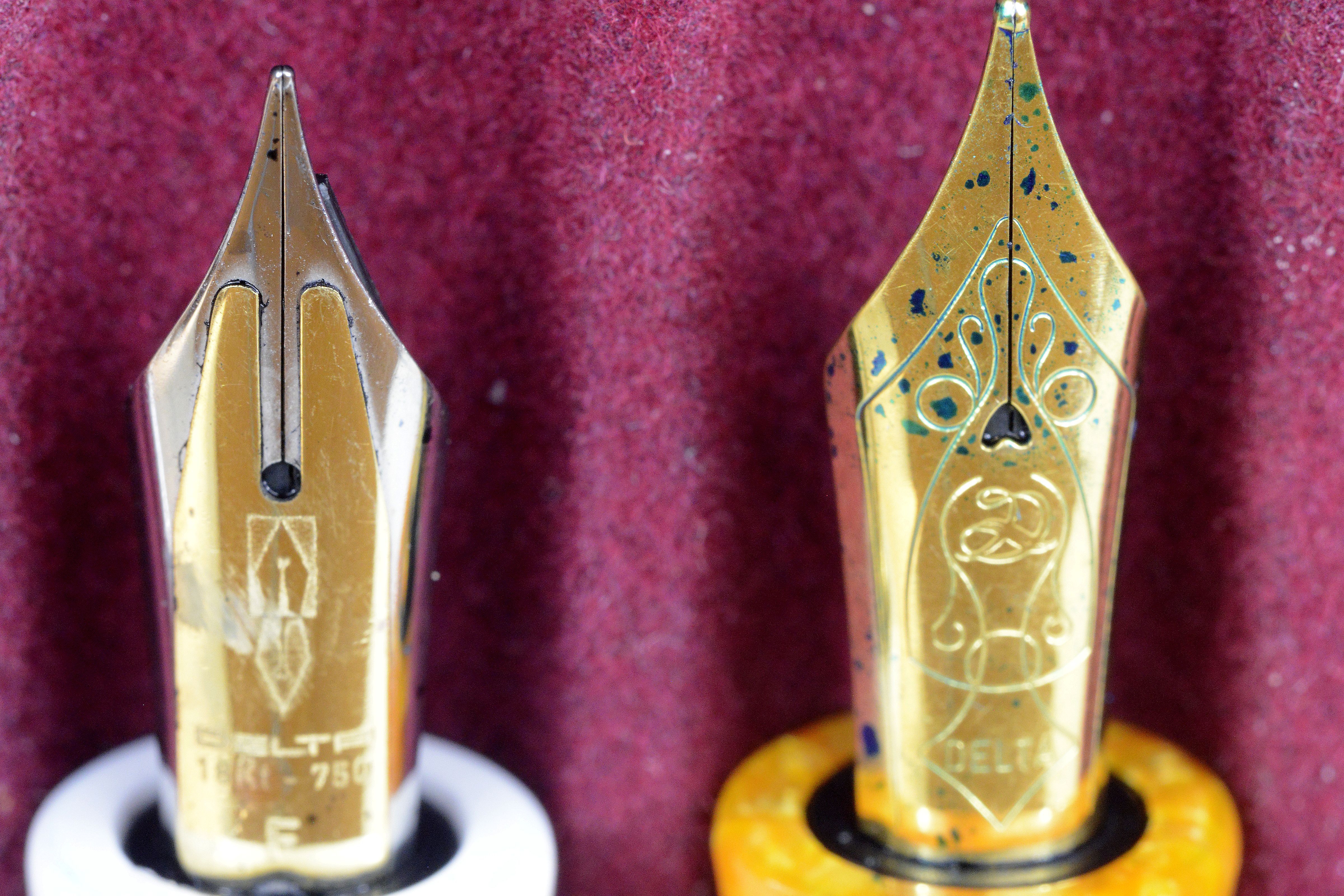 The nibs are different, though it’s harder to judge than that.  As I mentioned in my previous post on the DV, it should have come either with a gold or a fusion nib, however instead it was rushed out from the factory with a steel one which was so dry it would not write.  Even when testing and making notes with it for this article I found myself having to widen the tines again though now it writes as it should have in the first place.  This DF came with the controversial fusion nib.  It is smaller, a size #5 compared to the #6 on the DV and does look small in proportion to the pen.  It also wrote on the dry side, though I did widen the tines with a shim towards the end of this review, as can be seen on the writing sample below.  I am nervous about the fusion nib due to their reputation so I would hope both parts of the nib are part friction fitted in to the collar, however there have been too many reports of these falling off with no warning and without being touched, almost as if they are only glued on and that fails over time. 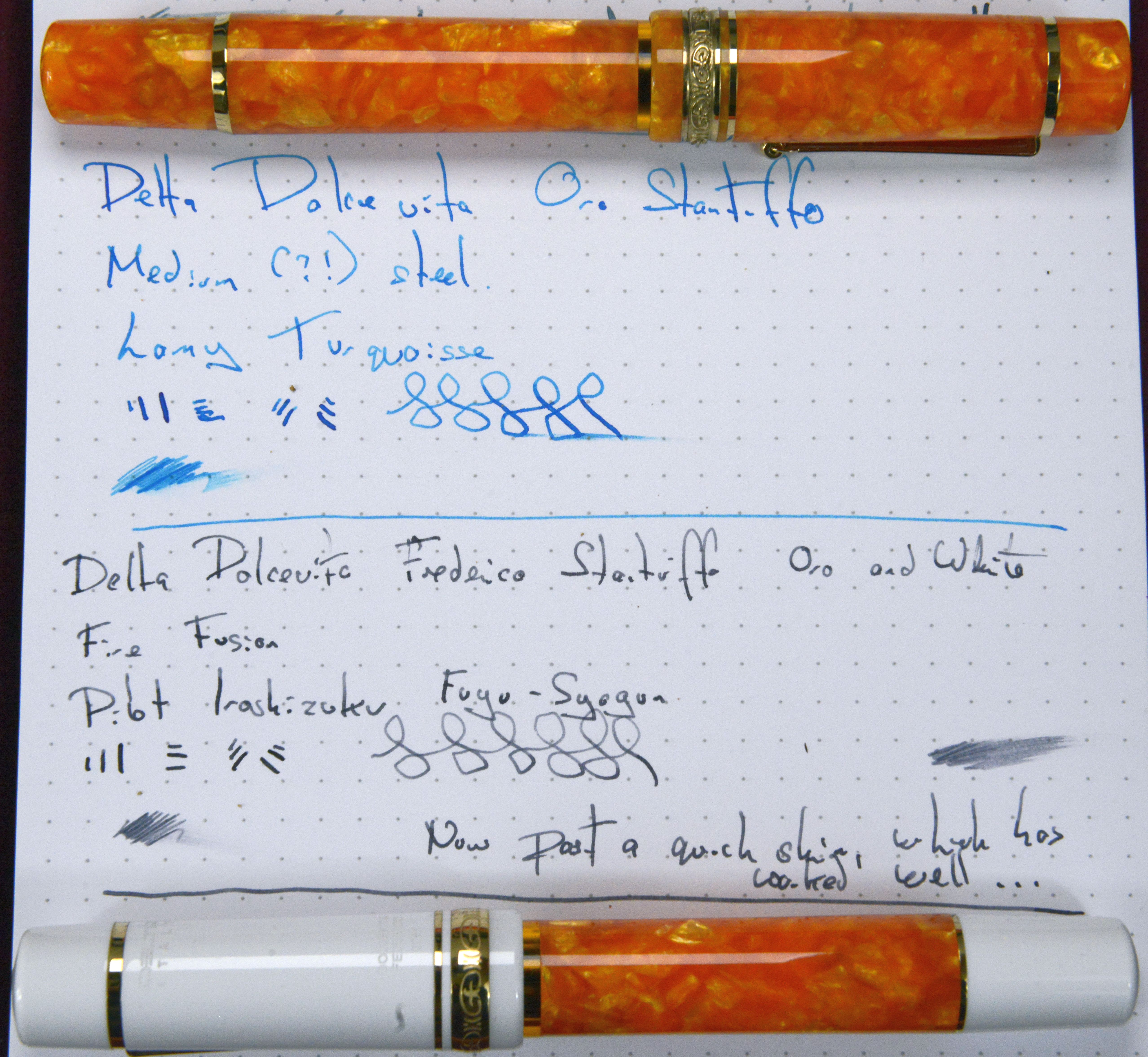 Writing experience wise, the DF worked out of the box and the fusion nib is still complete.  Both are nail stiff and personally I find neither than pleasant to use – all down to personal preferences though.  The DV is now the nicer writer, but that has taken work, and if I do risk trying to widen the tines on the DF (through a shim) it may become the better one. 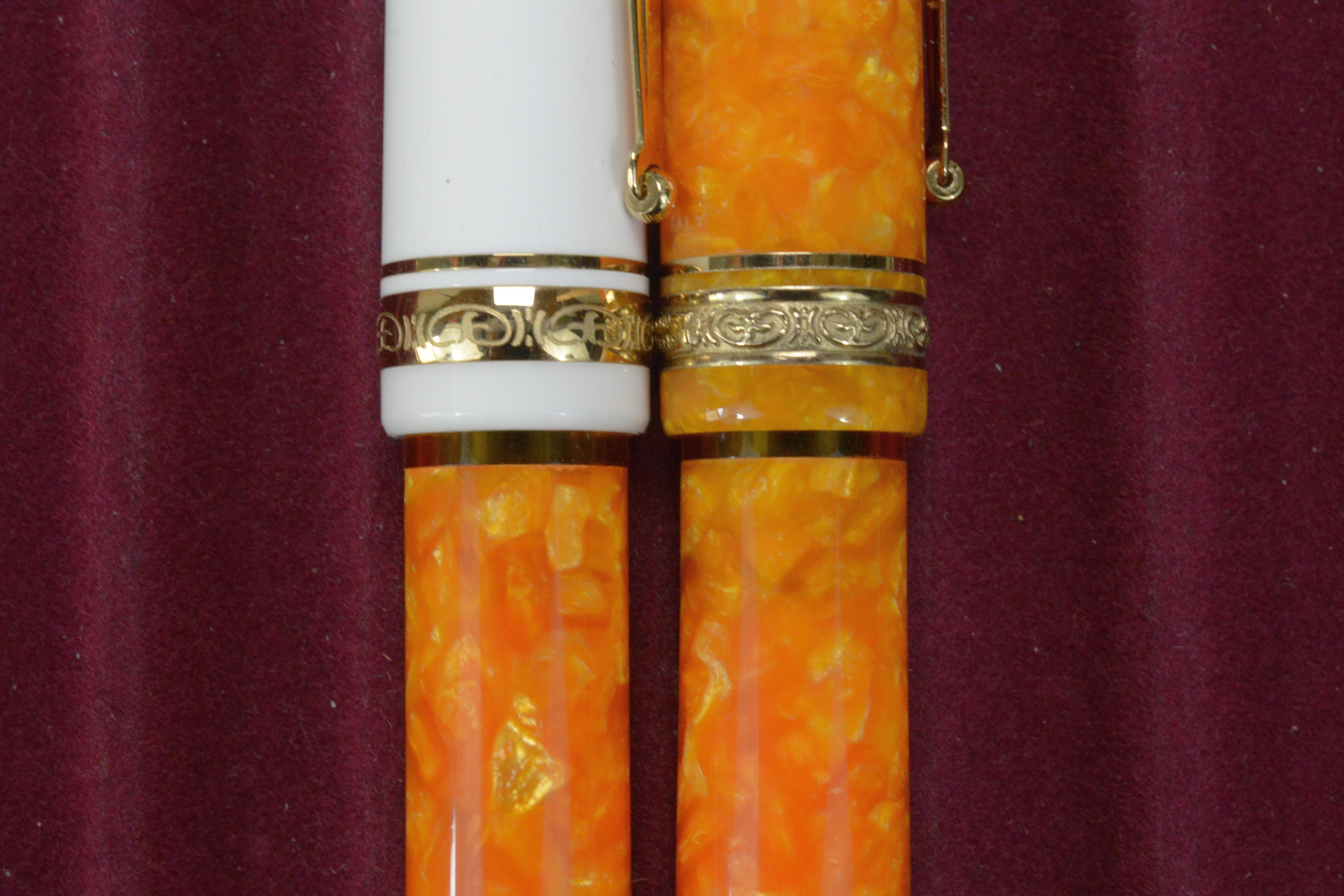 So where are the cost savings?  Well not the piston filler.  A cheaper, simpler one could certainly be sourced but this is one area where a quality product was maintained.  Obviously with the non piston filler pens it was the same Delta branded Schmidt converter in both models.  While much is similar in size and the caps and blind caps can be swapped, I would suggest the only parts the same are the clips, the grip section, and the ink window, though the hollowed out part of the section in the DV is wider to cope with the larger nib.  Also the DV has a screw in nib unit, where as on the DF it is friction fitted.  This is certainly one area that has helped bring the price down a small amount as a smaller friction fitted nib is certainly going to be cheaper than a larger one in a screw in unit.  Of course there is one big area of difference.  The big cap ring.  The sterling silver engraved ring is where the real cost difference is.

So does the Frederico feel like a cheap pen compared to the original?  I’d actually look at it from another direction.  If they had both been launched at the same time I’m not sure you could justify the cost difference between the two.  I believe in the USA with the 14k gold nibs on both the DV was ~$750-800 compared to just $350 for the DF.  I would argue the original Dolcevita was actually over priced.  Of course one of the conspiracy theories was Martemodena were forcing Delta to sell the pens at a lower trade price than they should have and this could part account of the reason, but that was just rumours and still would not cover such a large difference.  Certainly a #6 nib compared to a #5 and a sterling silver engraved ring do not account for three to four hundred dollars.  Having said that, the fit and finish of the DF is not to the same standard as on the DV, as evinced with the capping threads and the rings not being quite flush with the body/cap.

I think time has helped the Dolcevita Frederico.  Sure there were problems with them when new, but in the second hand market the bad ones will either be missing or fixed.  Certainly if you fancy a Delta Dolcevita but find the costs are just too high, then a Frederico may be a good option.

1 thought on “A Tale of Two Delta Dolcevitas”