I’m far from alone in liking maki-e and appreciating the skills and processes that go in to the creation of this form of art.  As with many I often thought that my only options would be the ‘cheap’ commercial screen print pens, which are approximately £100 a pop, as the far more attractive alternatives I saw were all high end in the four figure price range and with releases been limited to single digit numbers of pens.  Discovering the Namiki Nippon Art range was a revelation.  Sure these pens are still £400+ outside of rare deals, but they are also much more affordable for a hand drawn piece of work. 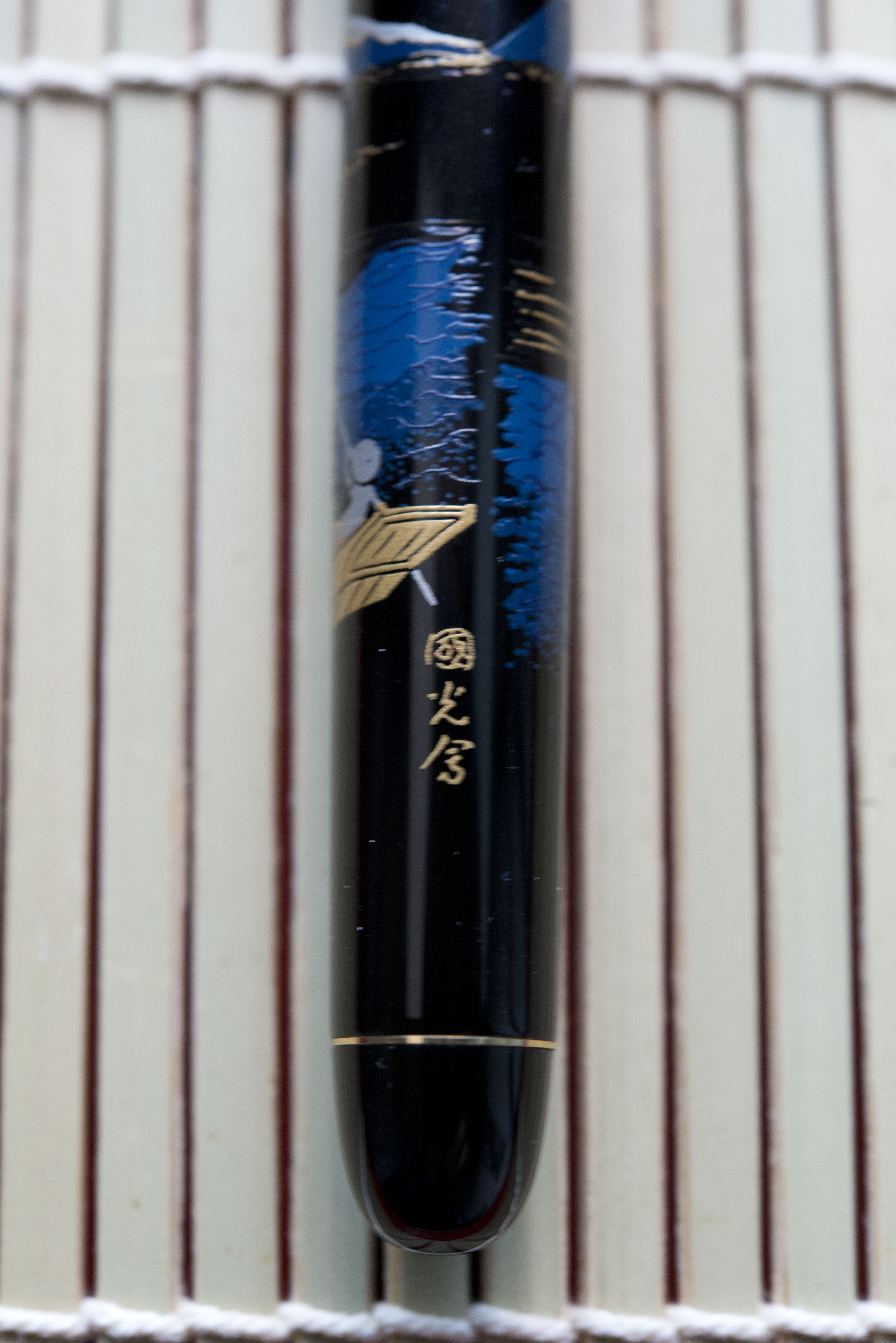 Before I go any further I need to explain the easiest way of identifying whether a Japanese made maki-e pen is hand drawn or screen printed, aside from the cost.  All the hand drawn pens will have the artist’s kanji signature on the barrel.  No name, then it is a screen print.

There are three or four series in the Namiki (Pilot’s high end sub-brand) Nippon Art range.  The ones I’ve seen have been Mount Fuji and Origami, but the Namiki website also mentions a ‘battledore’ series and shows a set of ukiyo (wood block painting) inspired pens.  Size wise it would seem to be based on the Pilot Custom 74, though obviously with different materials.  This does help keep the cost down and also makes this a smaller pen.  Art wise it is also of a simpler design, allowing the artisan Kokkokai to produce a large number of these. 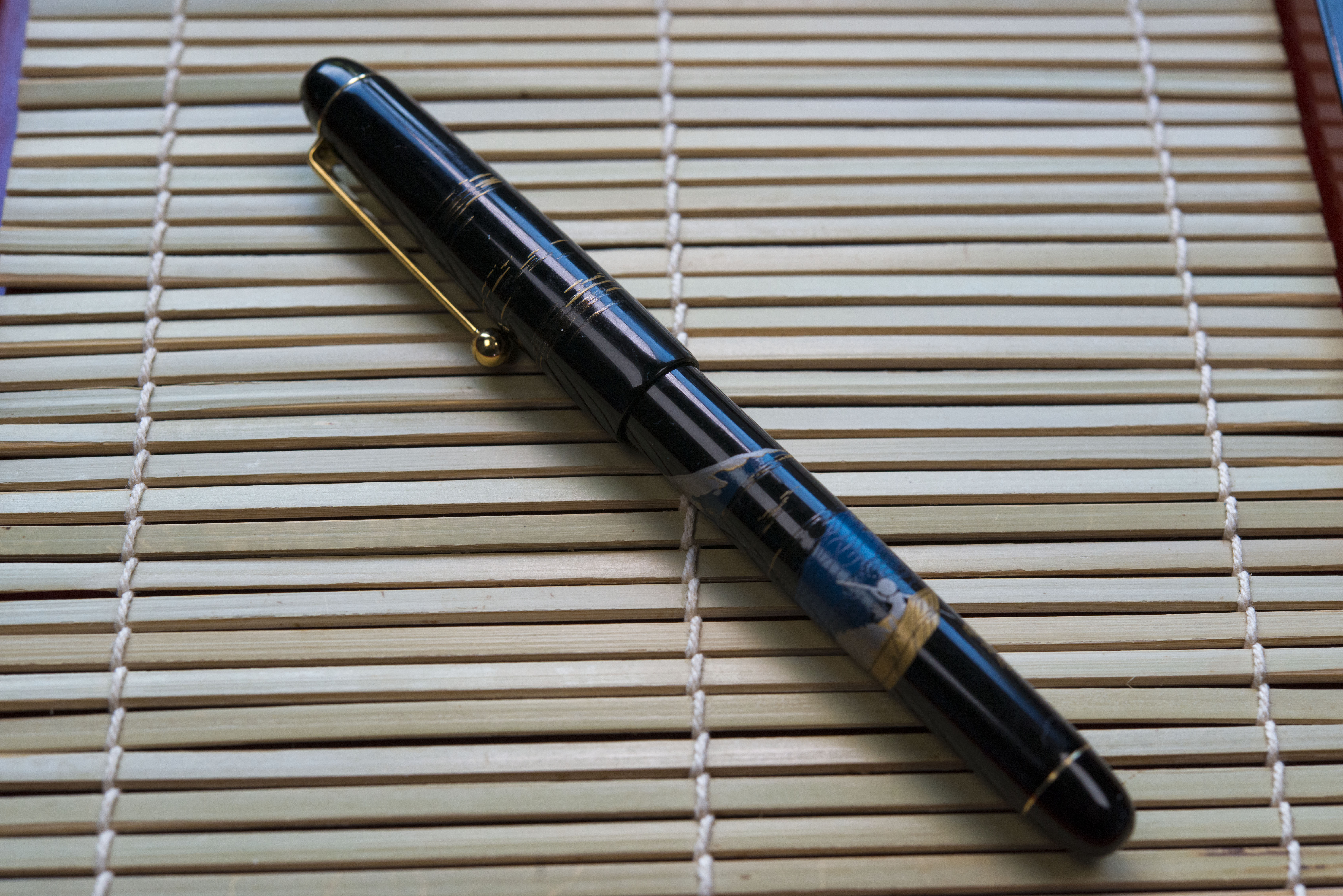 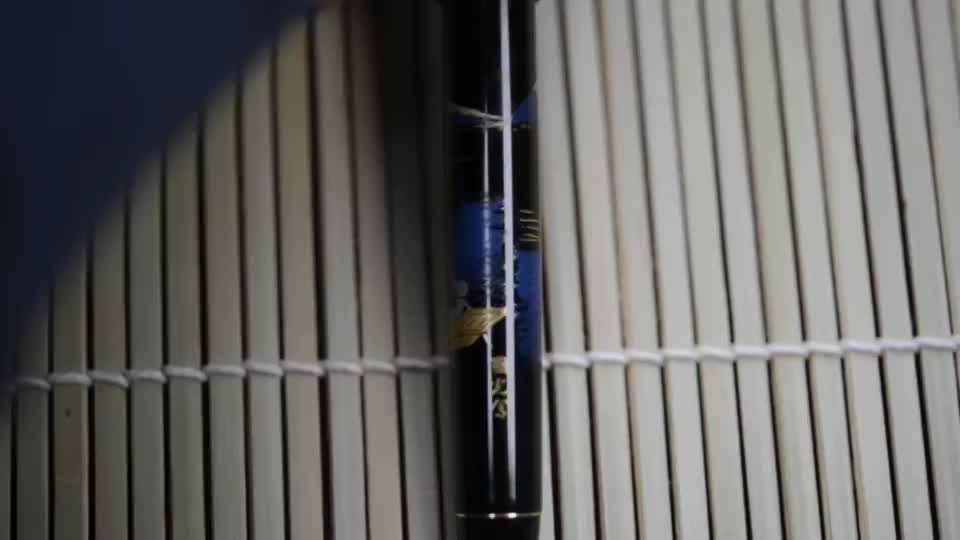 The picture on this pen, Mount Fuji and Ship, has a snow capped Mount Fuji in the back ground/upper part of the barrel, with a traditional Japanese fishing vessel to the fore on the water.  In addition there are ‘waves/ripples’ on the cap. 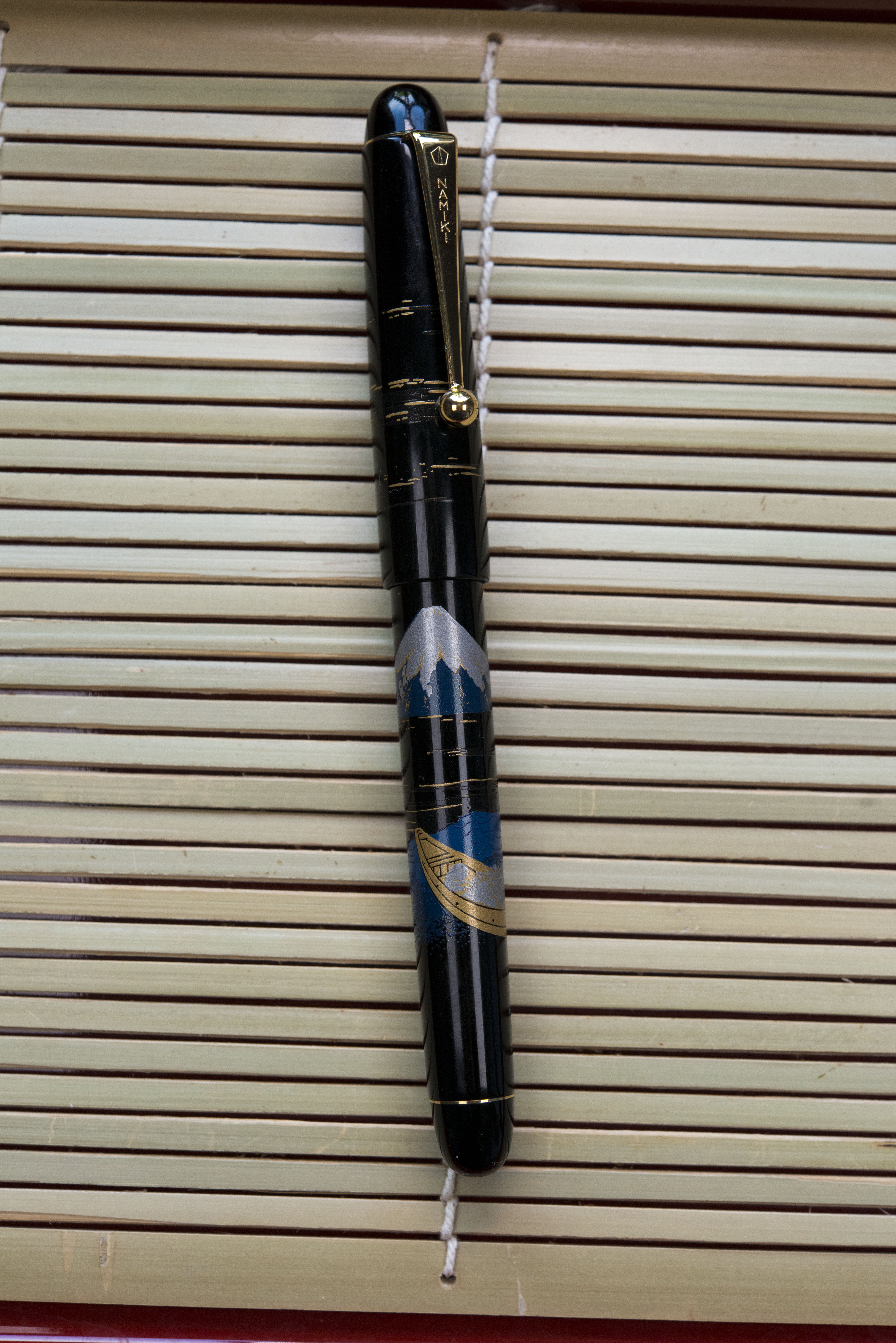 The cap and barrel are made from brass with a resin used for the section.  The exterior (aside from the clip/clip ring and a ring at the bottom of the barrel) is coated in a black urushi lacquer on which the picture has been hand drawn.  The style is Hira Maki-E, which is meant to be flat, however even with the protective layers of lacquer on top and the final burnishing, you can still feel the painted elements against the base layers.  it does make me wonder just what raised Maki-E feels like. 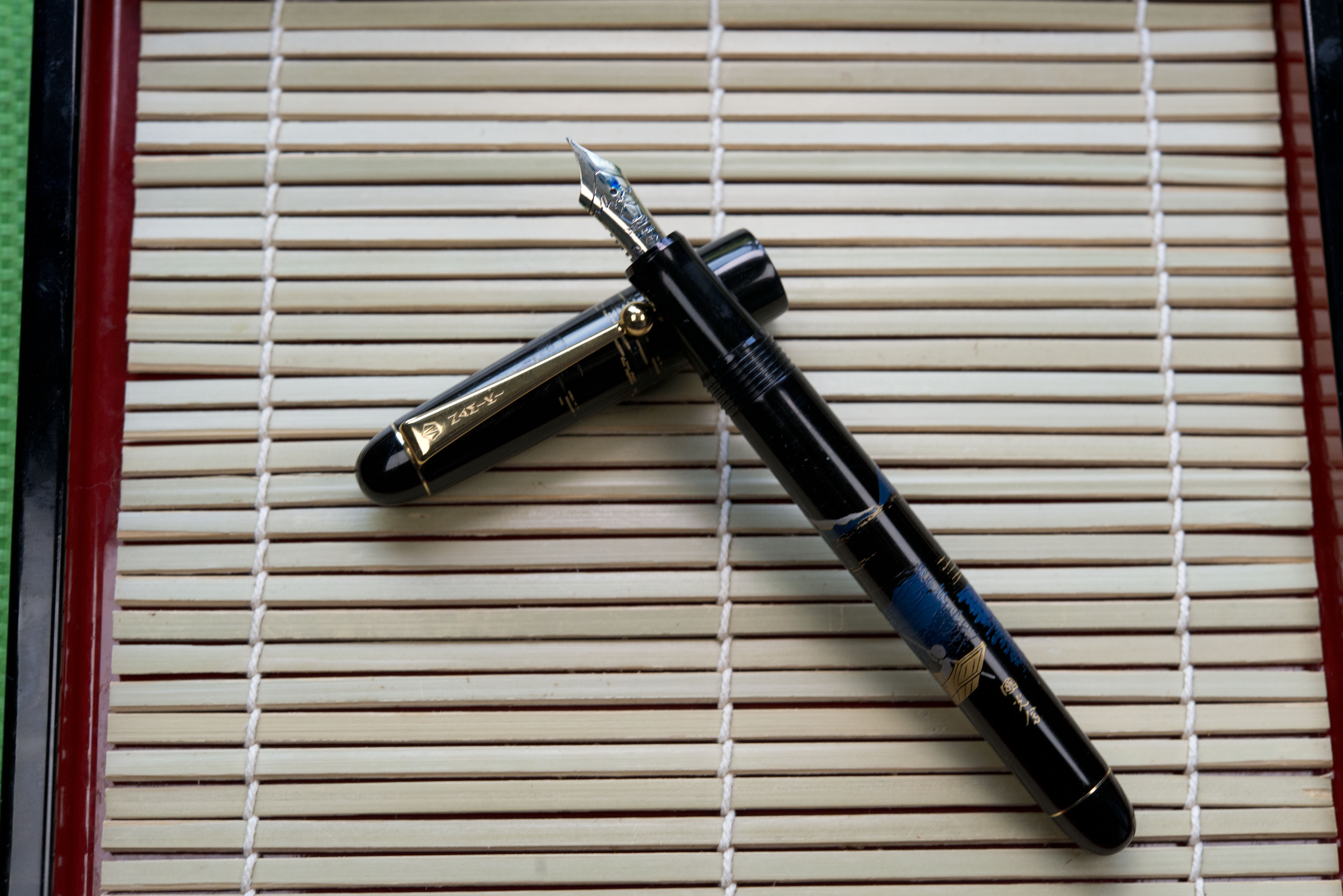 While being metal based, the pen is light to hold.  It is comfortable in the hand though people who prefer larger pens might find it a little too small (think Platinum 3776 or Pilot Custom 74).  The cap threads appear to be lacquered and are soft to touch/hold.  With the converter full the balance point is about half way down the barrel but due to the lack of weight it is still comfortable to hold.  The cap does post, though I’m not sure you would want to do so as I can’t tell if there is a plastic inner cap, so there could be the risk of micro-scratching the barrel (and bottom of the art work), plus the irrational fear of wearing the picture away – which you can do with the screen print pens as they do not have lacquer/protective coats.  Posting the cap does back weight the pen and make it rather long. 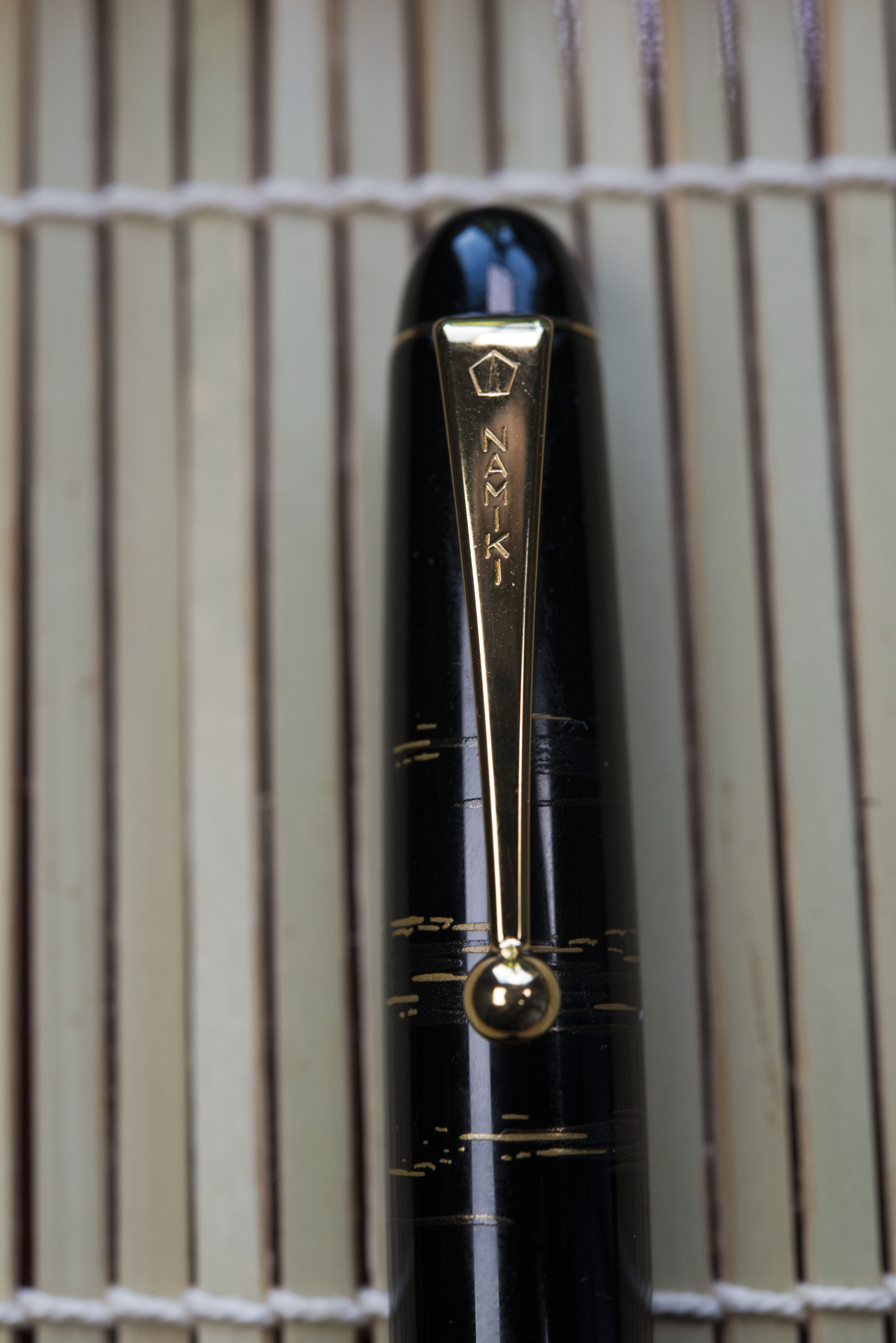 The clip is the traditional Pilot ball ended unit, though with Namiki branding.  It does work well. 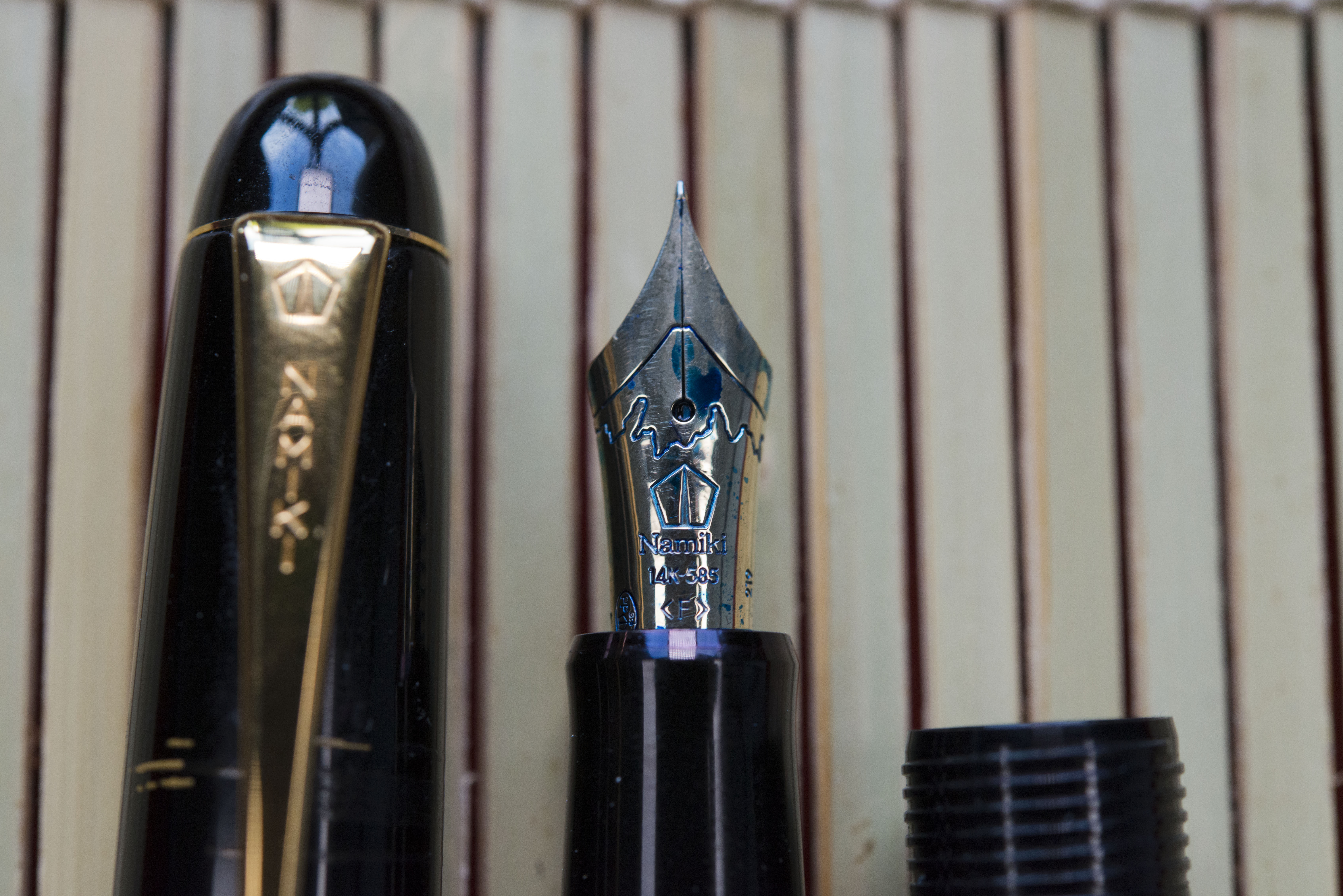 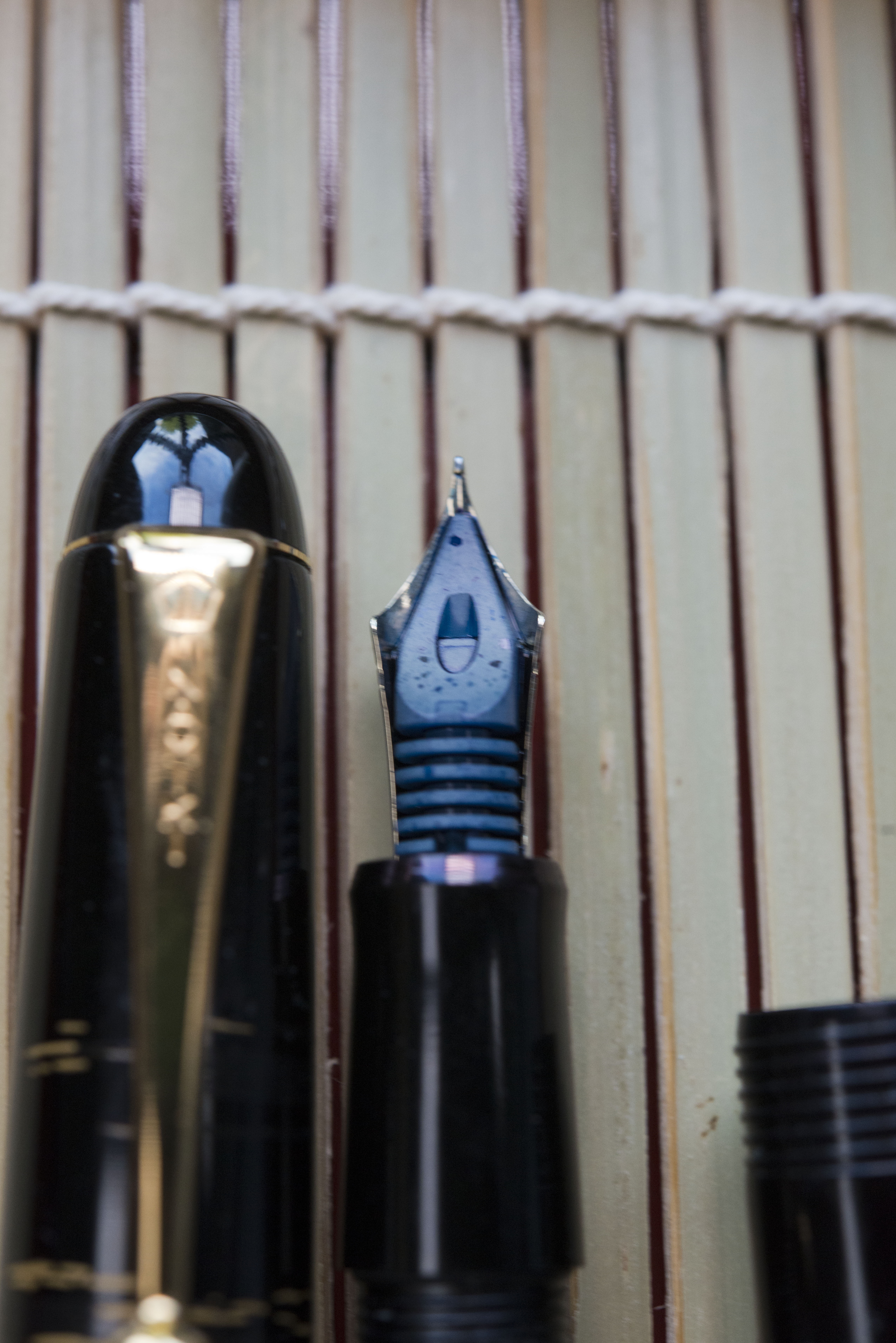 The nib is a size #5 14k unit with a plastic feed.  I went for a fine, which as expected writes almost like a European EF.  The net result is a pencil like feel though a little line variation can be safely obtained.  It is actually surprisingly wet , though not a gusher.  This could be partly down to the ink I’ve been using, Pilot Iroshizuku Tsuki-Yo, which is reasonably wet and has a decent flow.  One thing I have noticed is mine does suffer from nib creep – not too badly, but the ink on top of the nib does slowly increase over time. 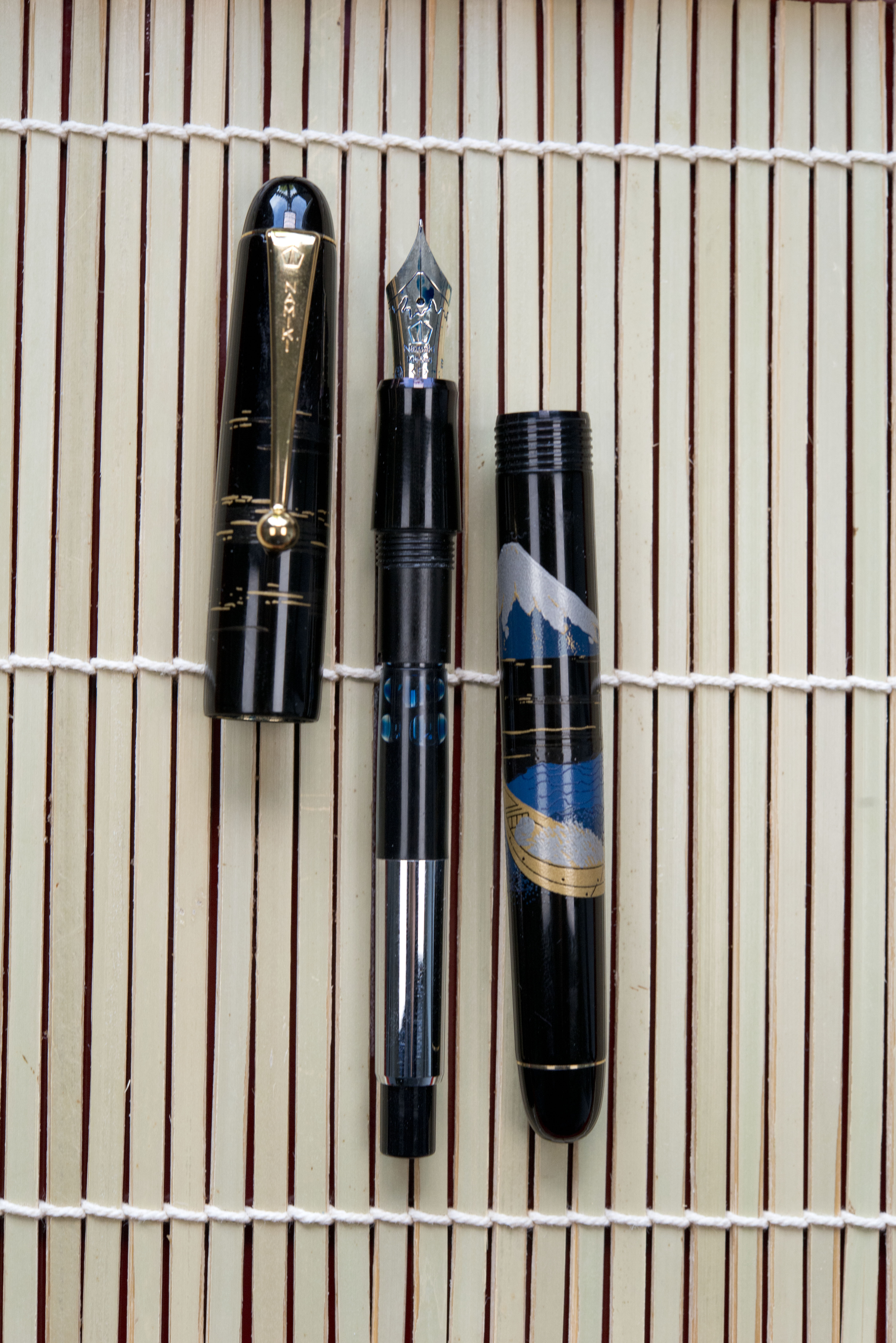 The pen uses the Pilot proprietary system and comes with a Con-70 converter already installed as well as a bottle on Namiki branded black ink.  The packaging is not subtle.  A large cardboard box surrounds a large wooden box with securing straps fitted (and threaded through each side of the base).  Inside there is lots of padding and I assume the same presentation is used for all bar the very limited edition pens, such as the 100th anniversary set. 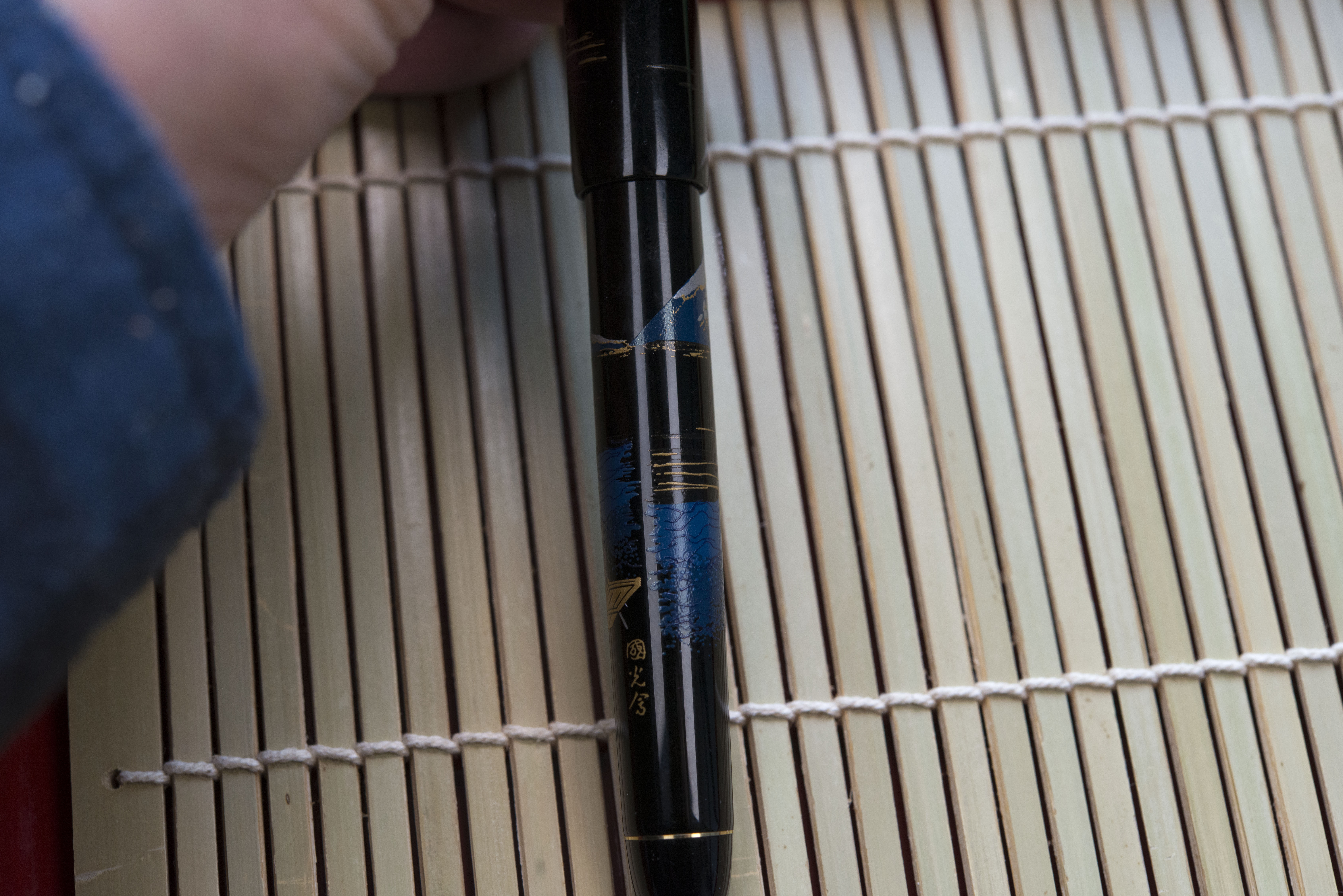 So what are my views.  It’s a nice looking pen, simple in design, maybe too simple but then you’re paying half as much as the next step up and a fraction of the most complicated pieces of Namiki art.  The fact the patterns are not too much different to the cheap screen print pens also does not come in to it, after all it’s your pen and you know it’s hand drawn/painted, so why would you care what others may think.  Writing wise it’s pretty average, partly due to the nib.  I think I should have gone for a medium instead.  Would I recommend buying one, it’s like any pen past the £100 point (to me) – ideally you should try one first, but more importantly with maki-e, you should also make sure you like the picture and will continue to appreciate it.

Note I have included a Croxley fountain pen from the 1950s to illustrate my point about this pen being on the smaller side for a modern writing tool. 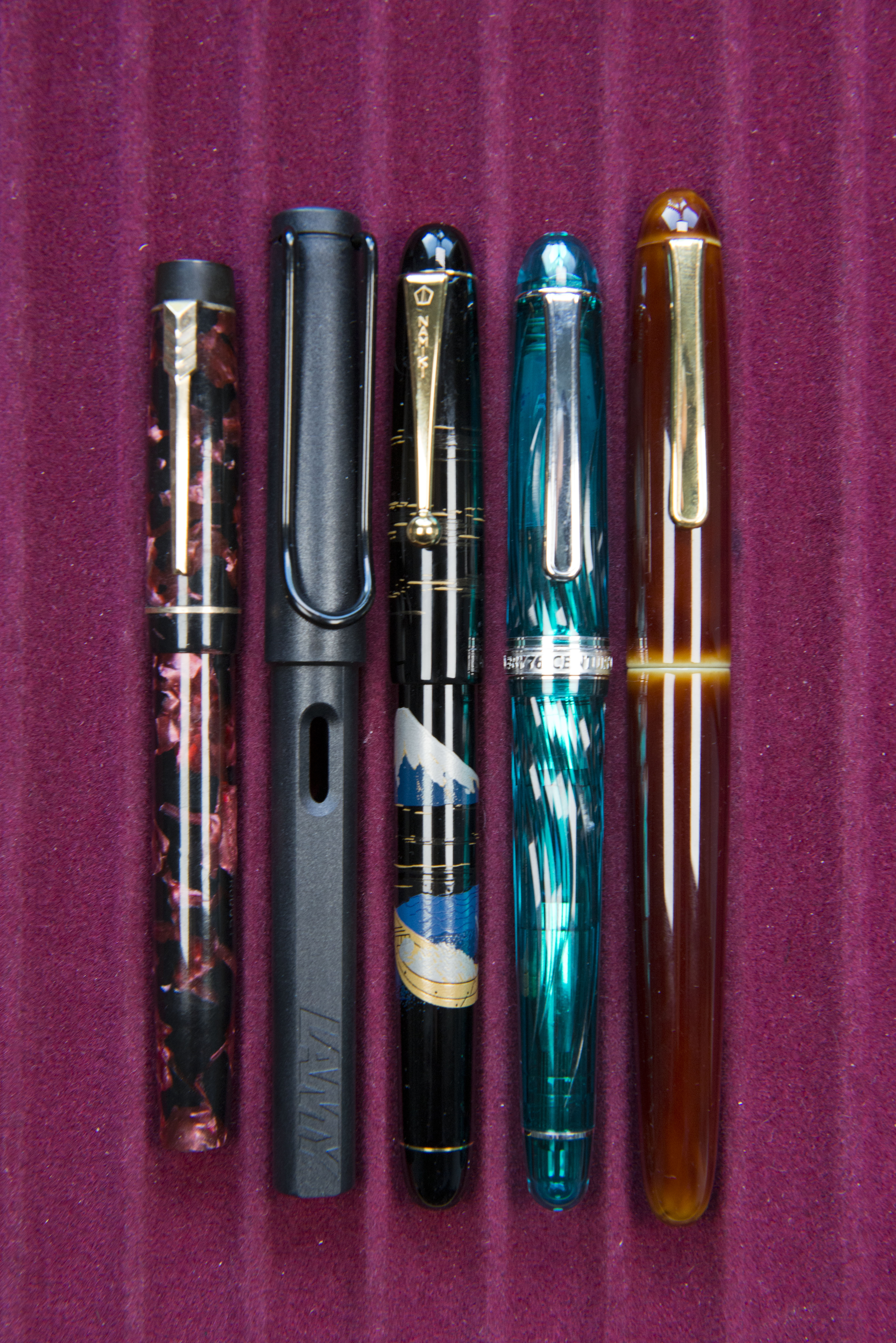 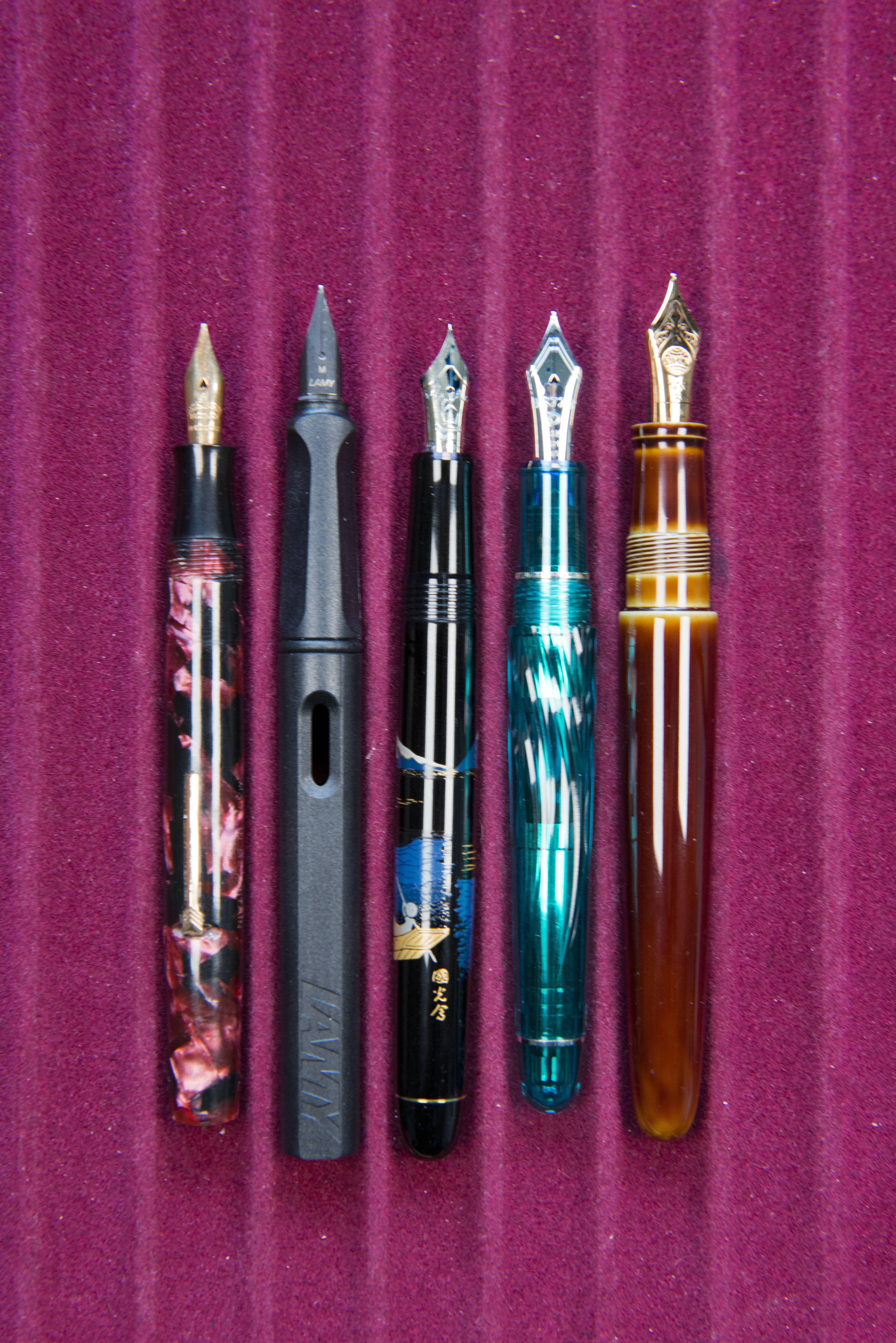 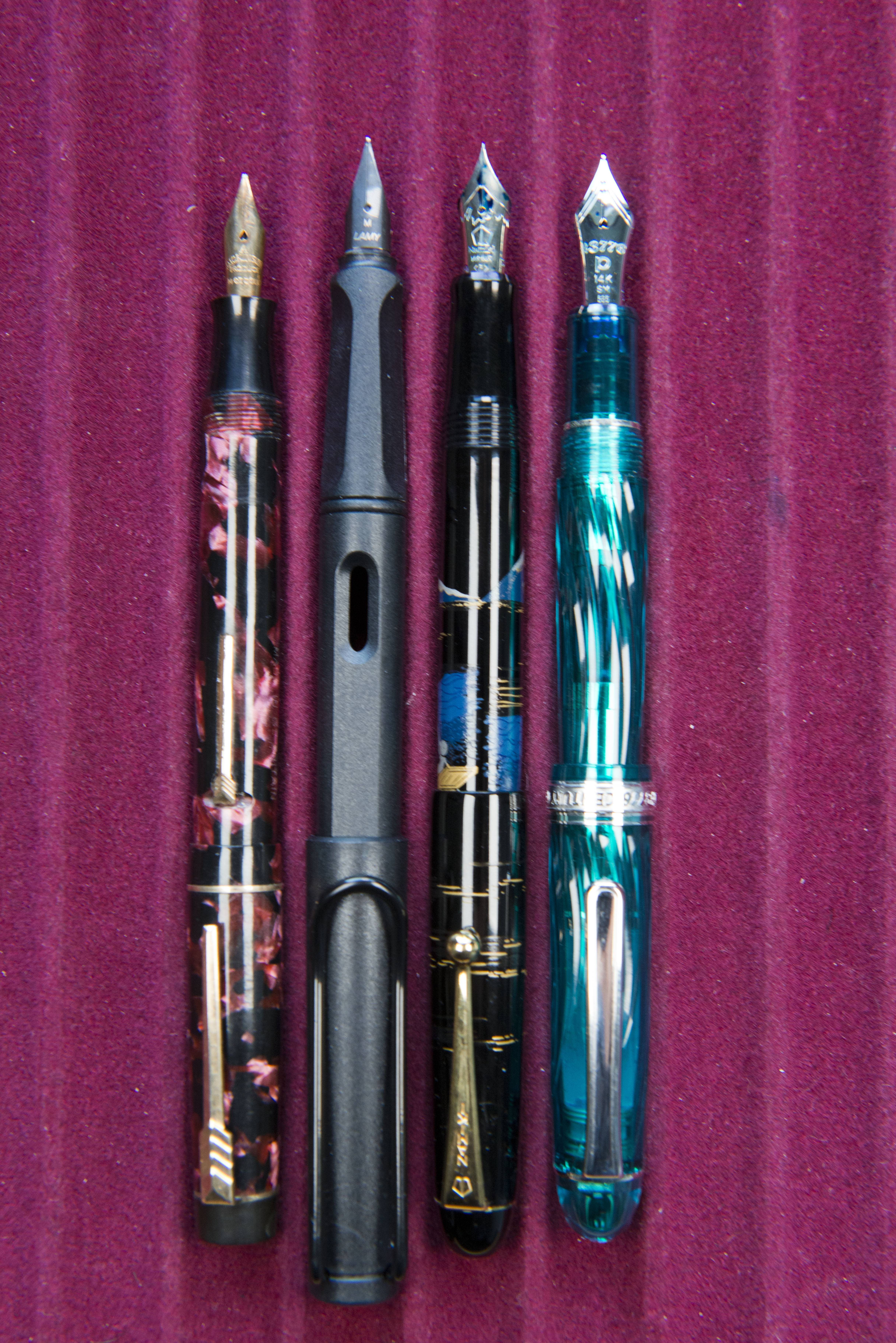 Nakaya removed as it can not post the cap 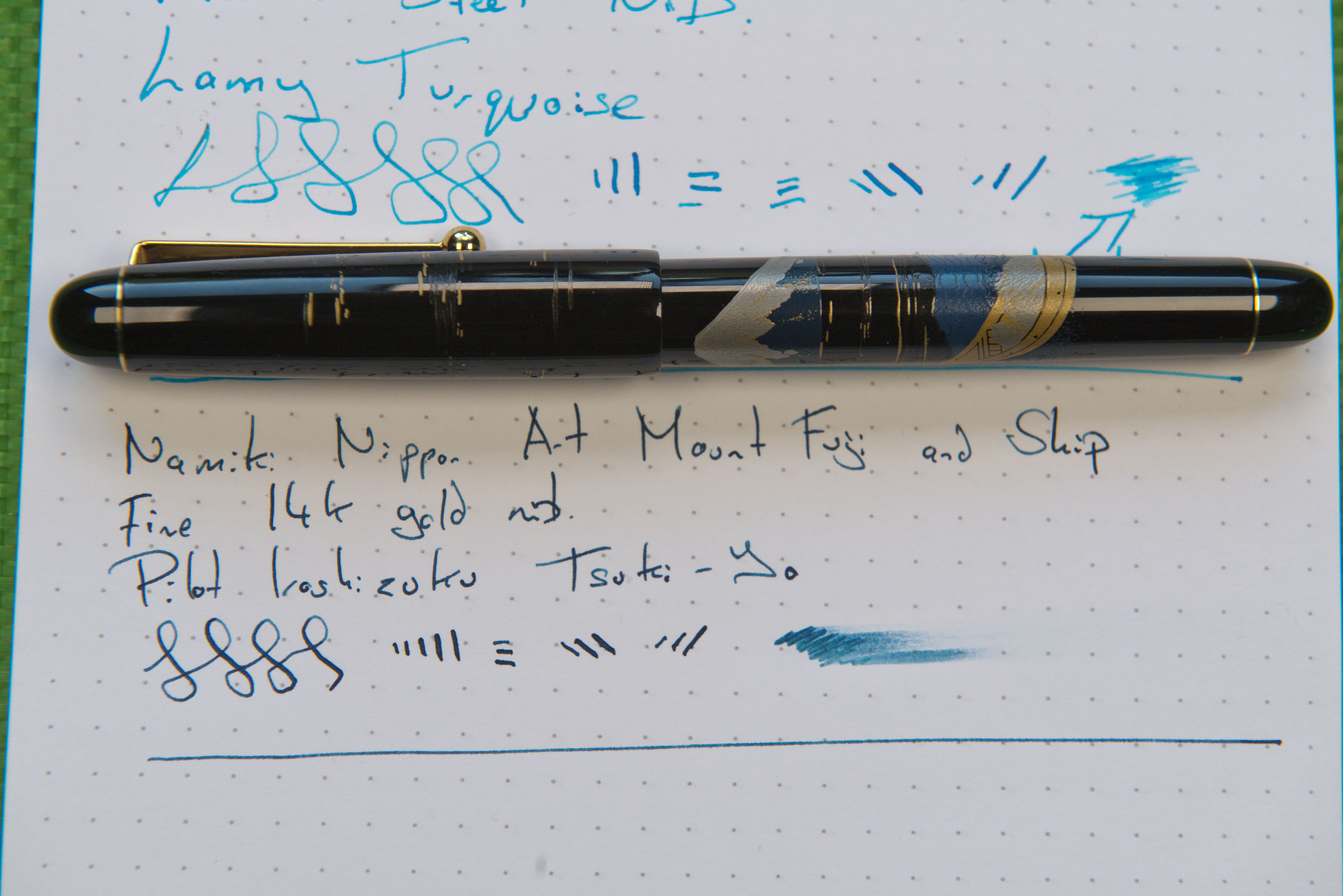 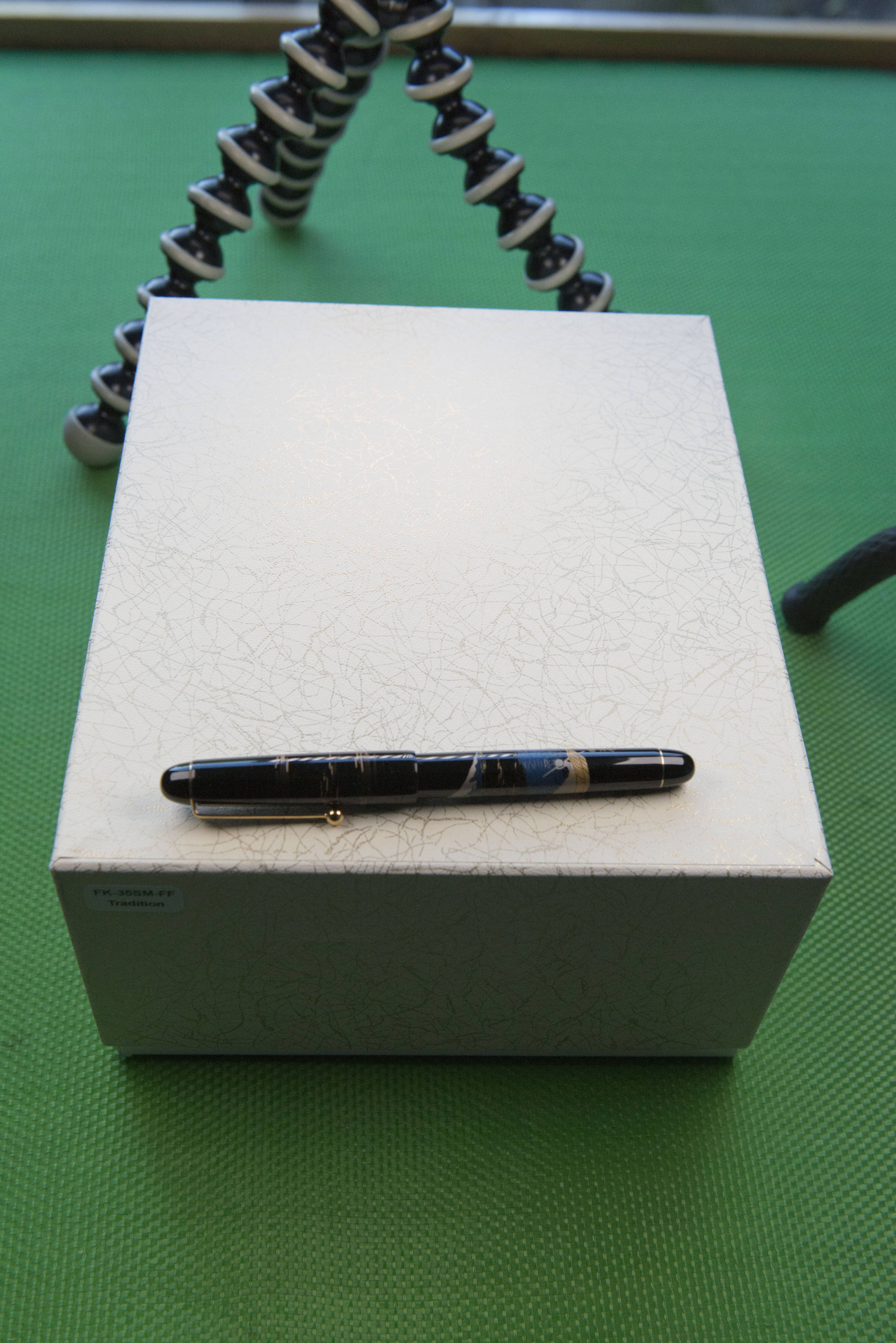 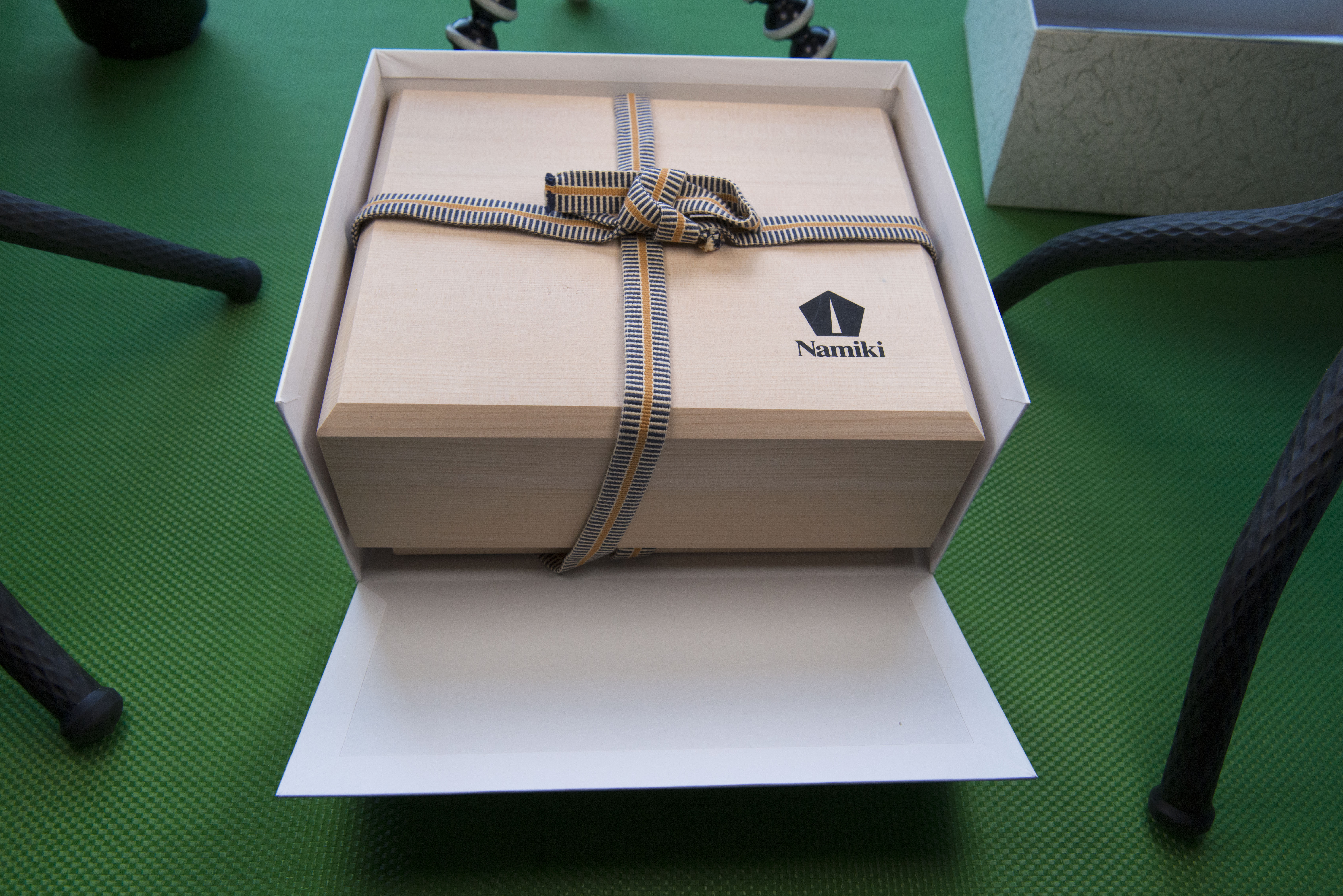 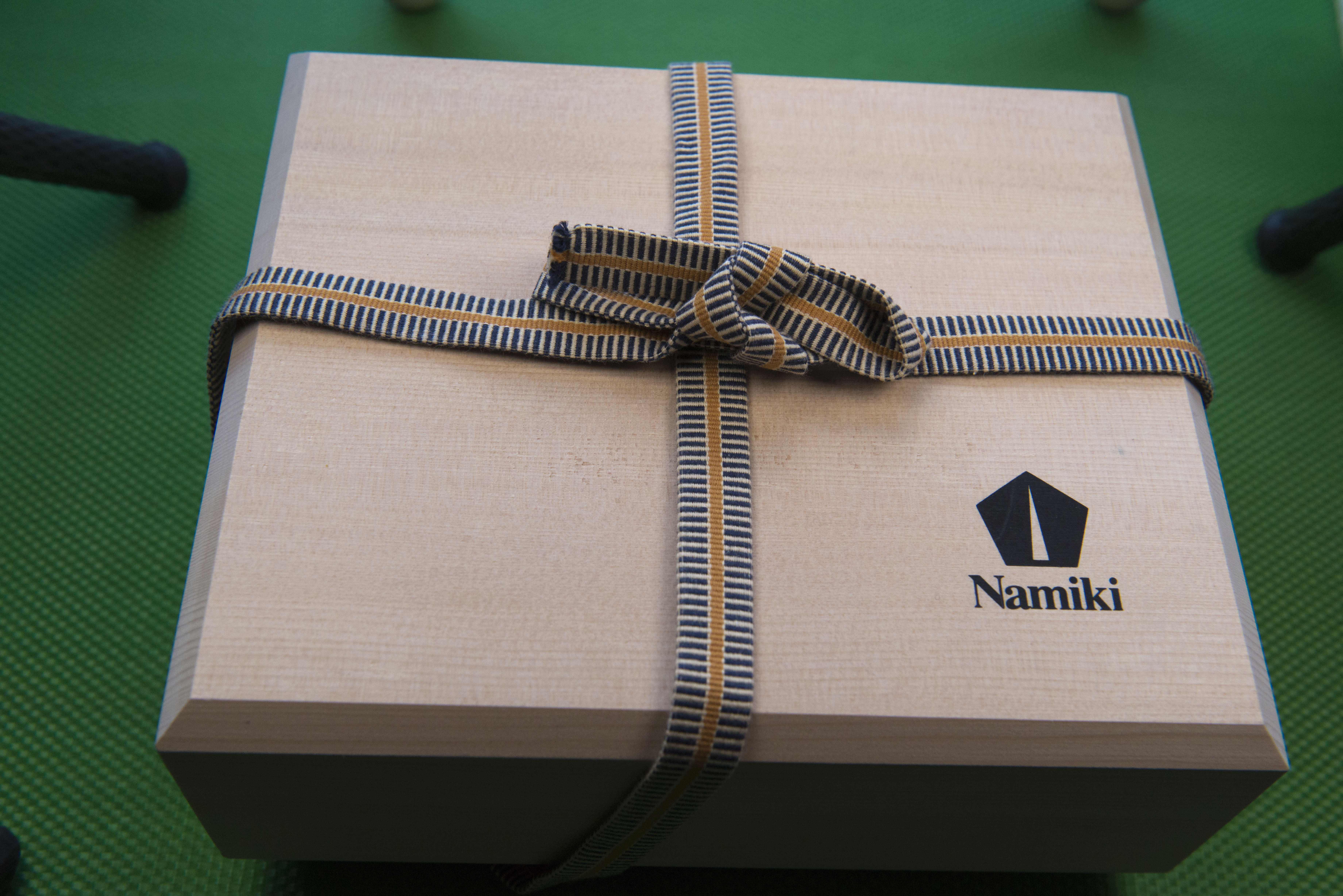 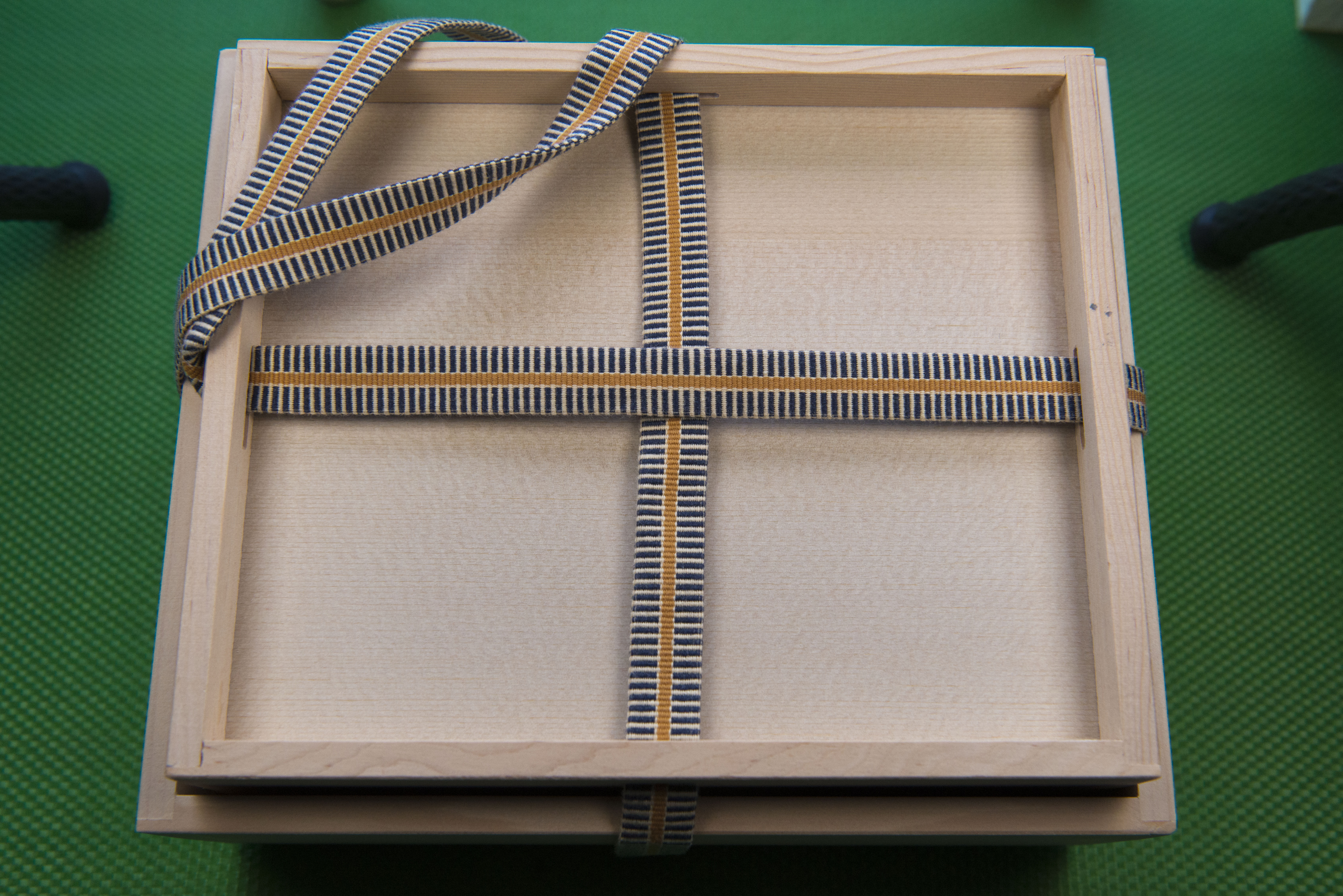 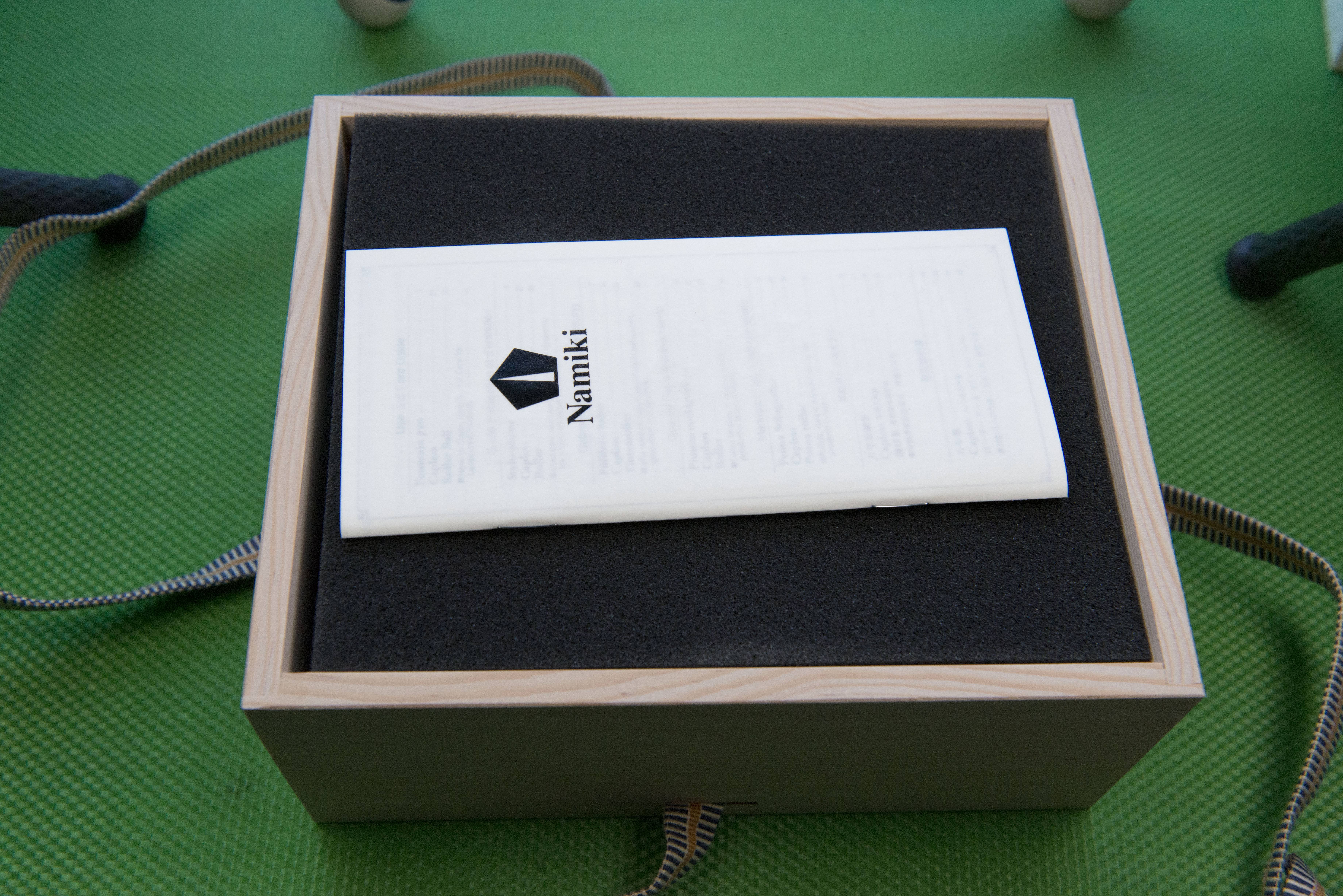 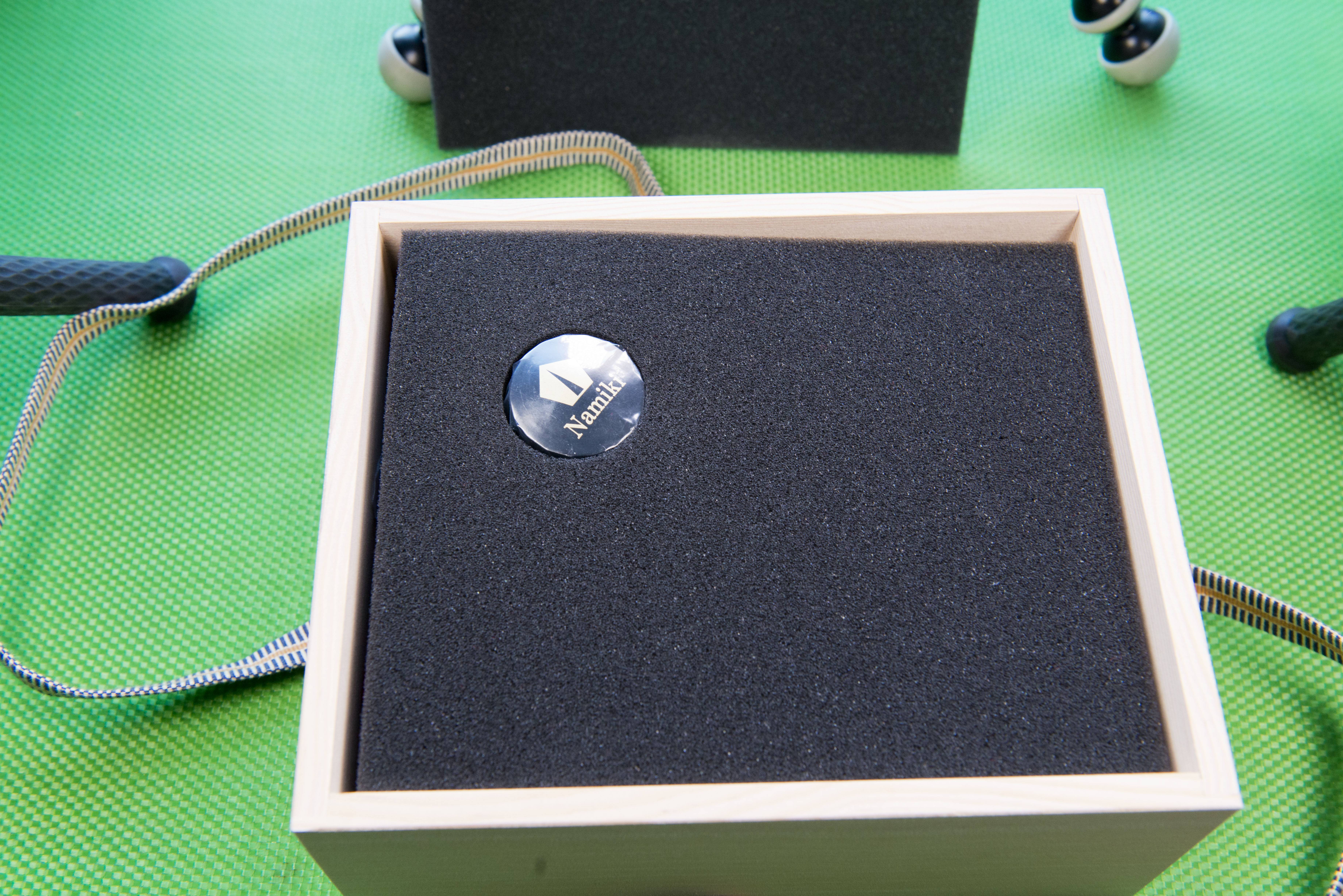 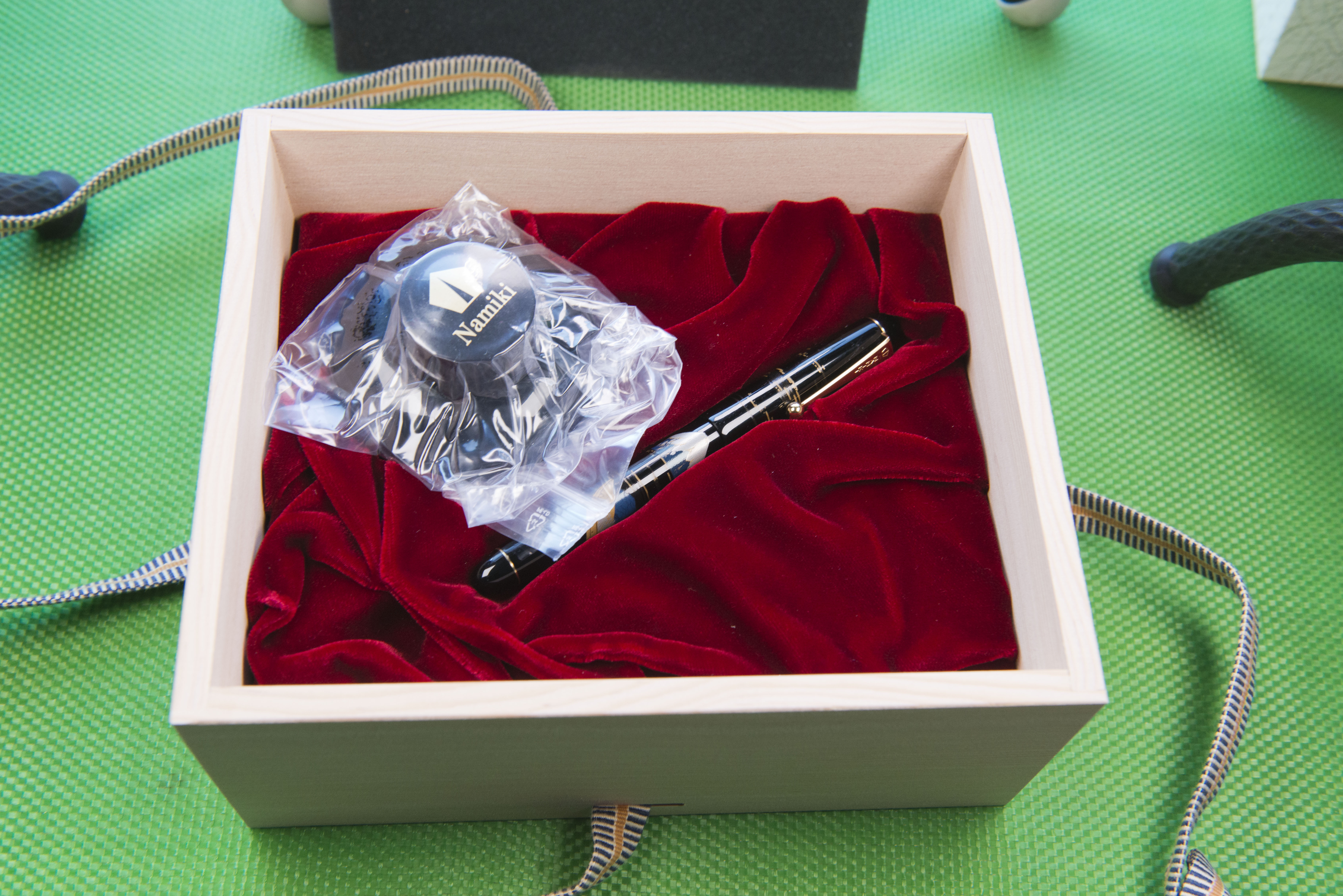