As covered in my previous piece on the OMAS 360 Vintage I mentioned about the ‘New’ version of the 360.  This was launched in 2007 with a more modern look, and arguably as an entry pen in to the OMAS brand.  With its angled triangular finials, flattened clip, new OMAS O on the cap, it certainly looked the part, but it was also divisive amongst OMAS fans and from what I can tell the model was dropped again just four or five years later.

Not sure there are many companies out there where a new entry level pen starts around £330/€410, however at the time of launch it was not their only model at this price point.  It should be noted that most other fountain pens in their range started atleast another £100 higher, much more if you ignore the mezzo/converter models. 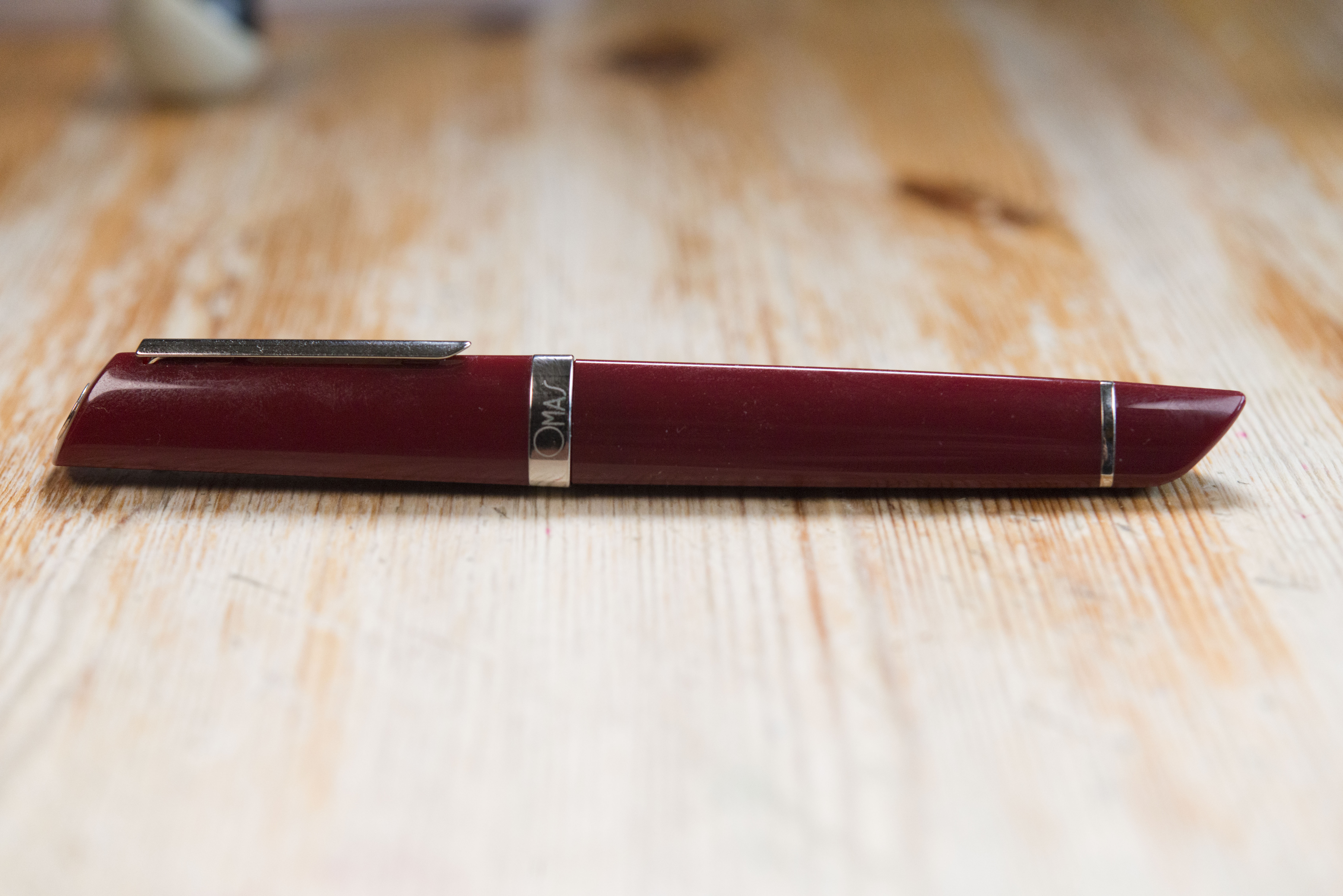 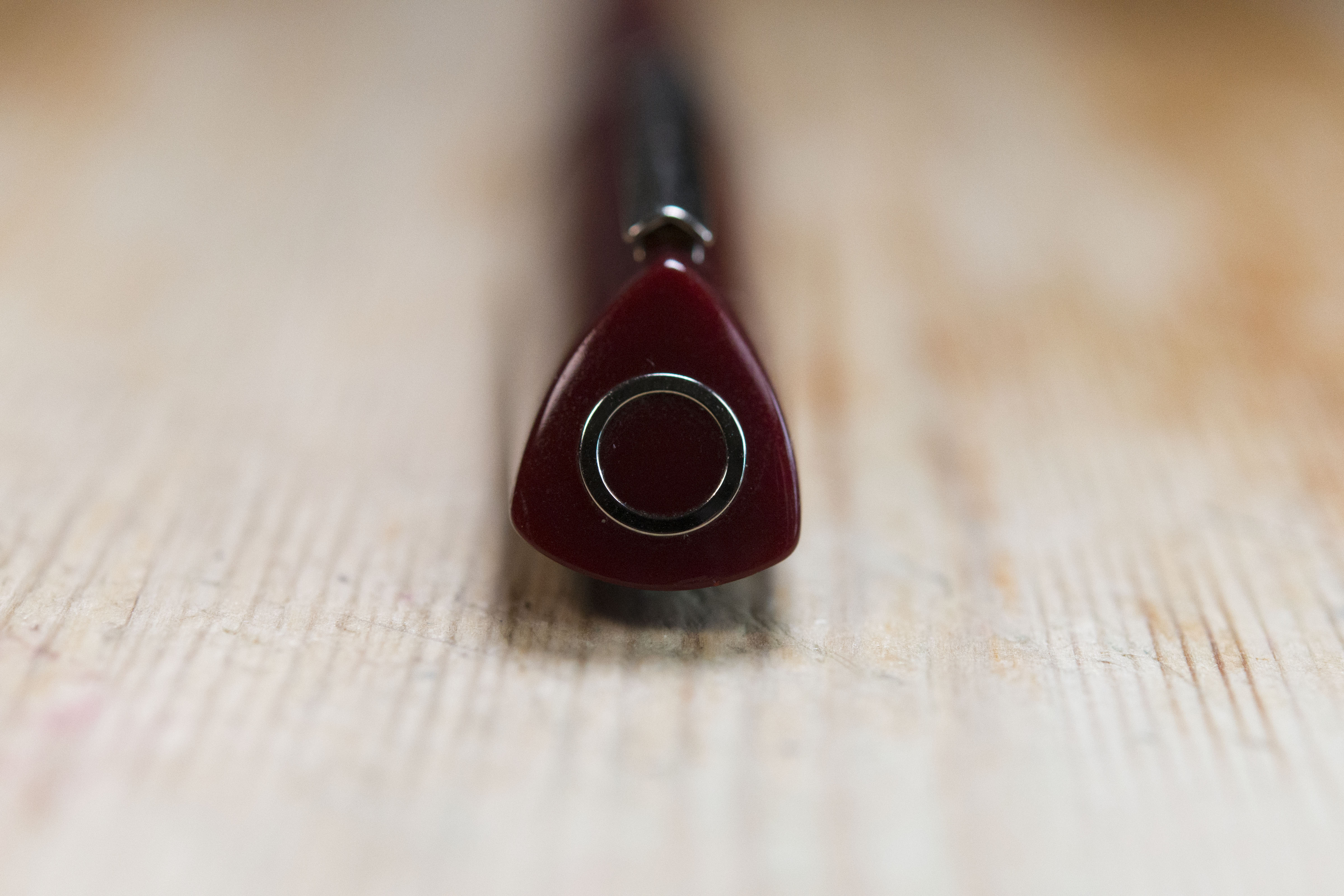 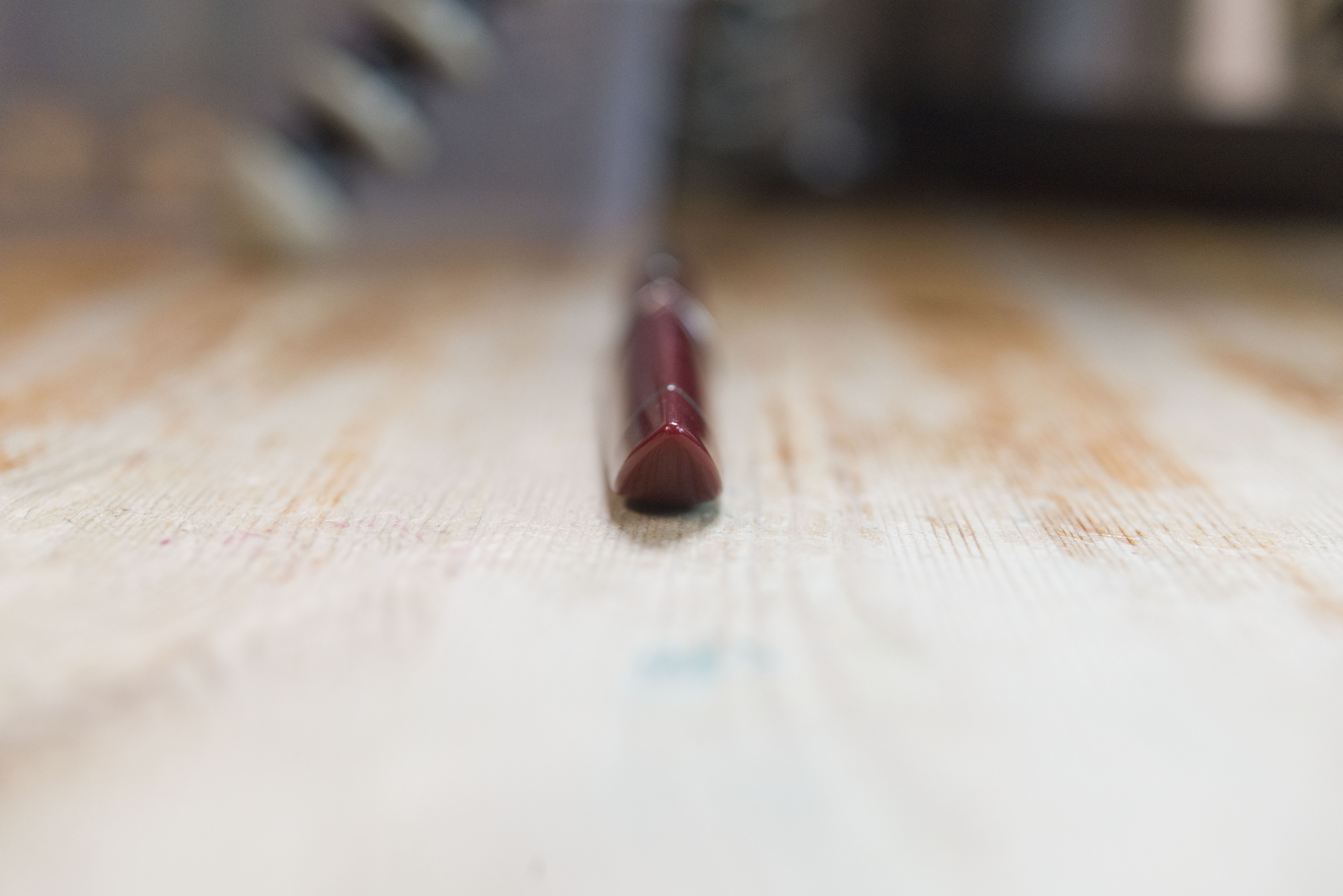 It is a striking design and it does make the original 360 (which was made along side this model and continued to be sold right up to the end of the company) look rather dated.  The tight lines, more subtle use of the rhodium plated metal work, and flattened clip made it look smart, stylish and business like.  A pen for the successful, the fashionable, the forward thinkers. 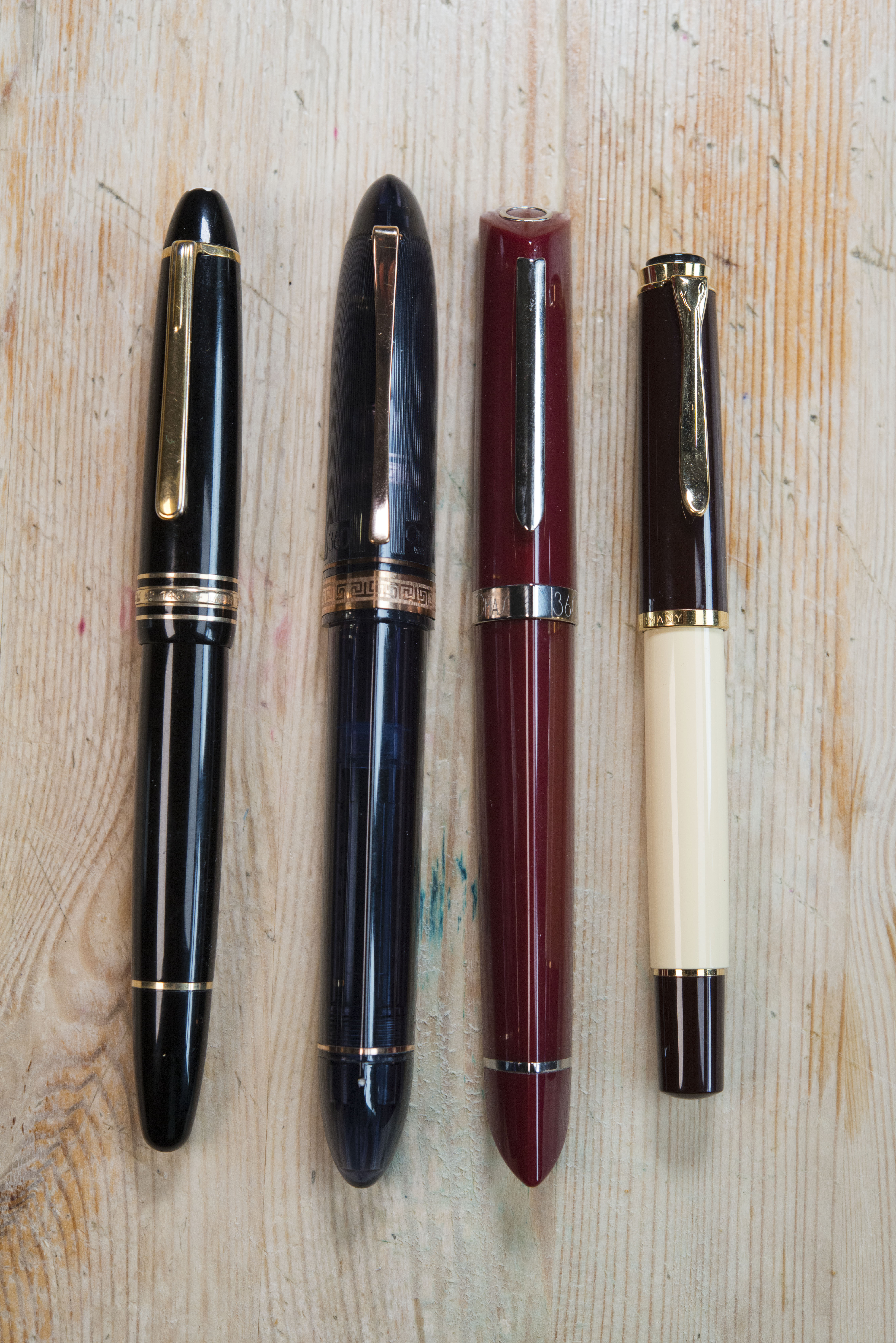 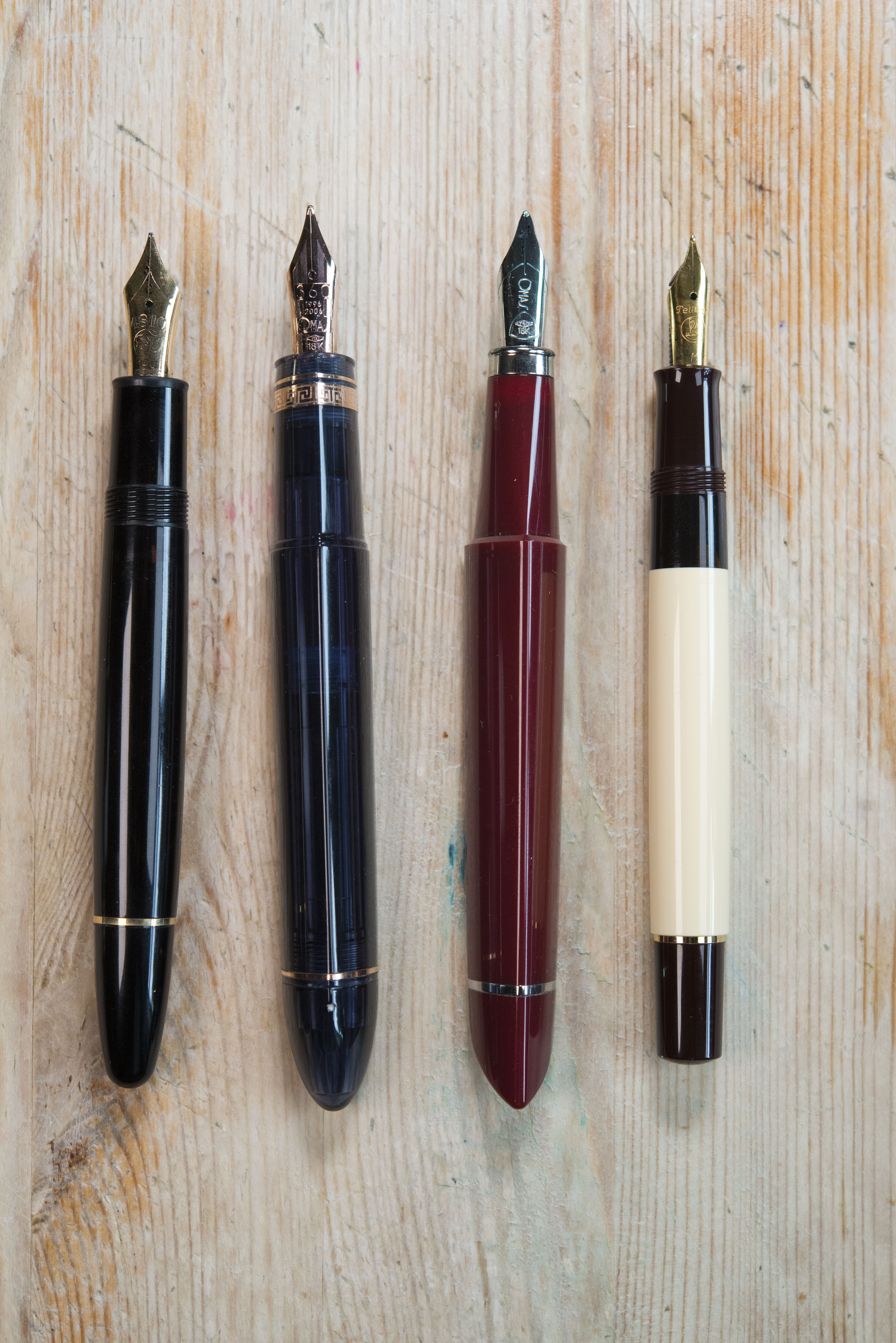 Placed next to a Montblanc 146 or a Pelikan M800 (I only have M200s, but the core shape is the same) and it makes them look like pens from the past, hand me downs from parents and grand parents. 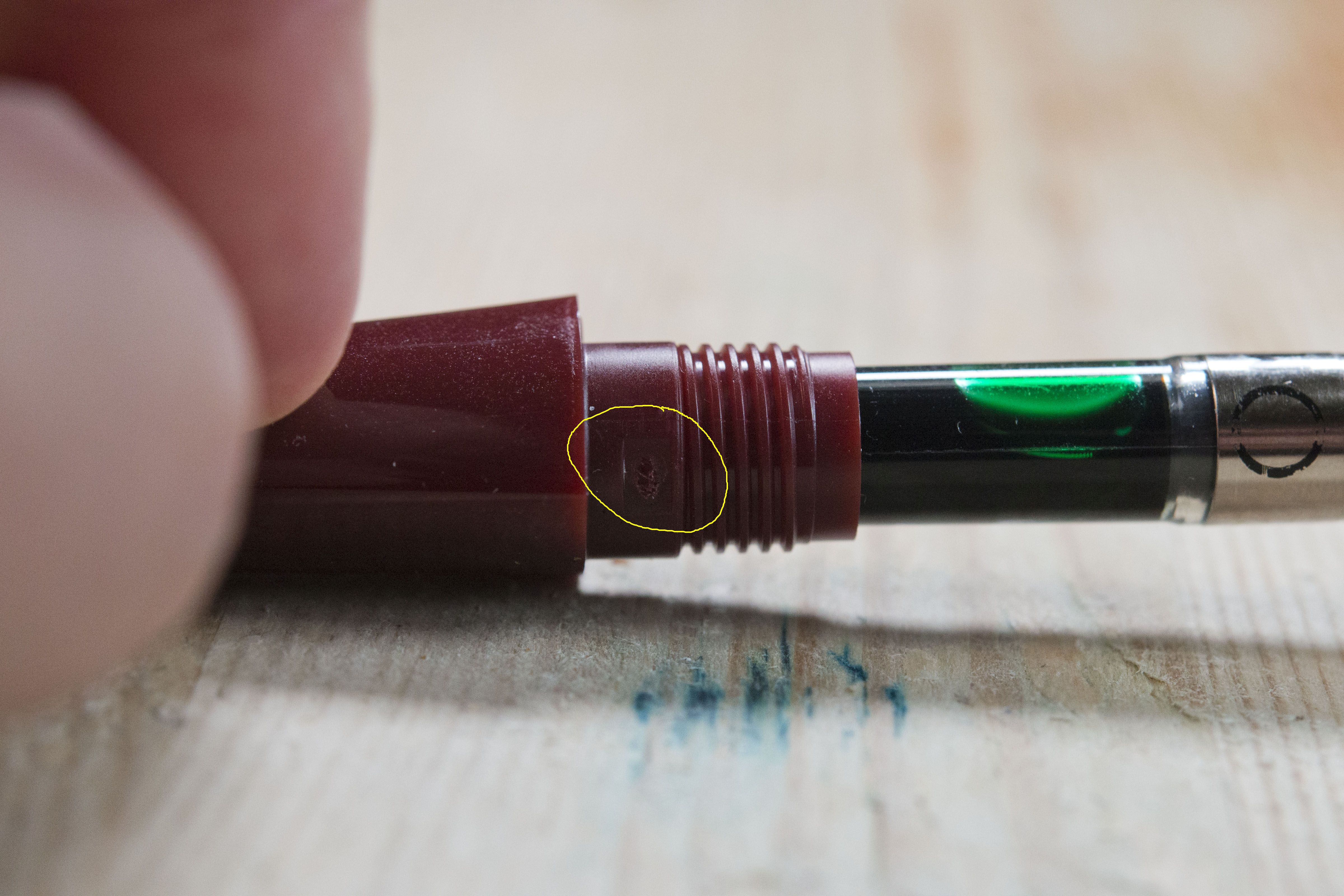 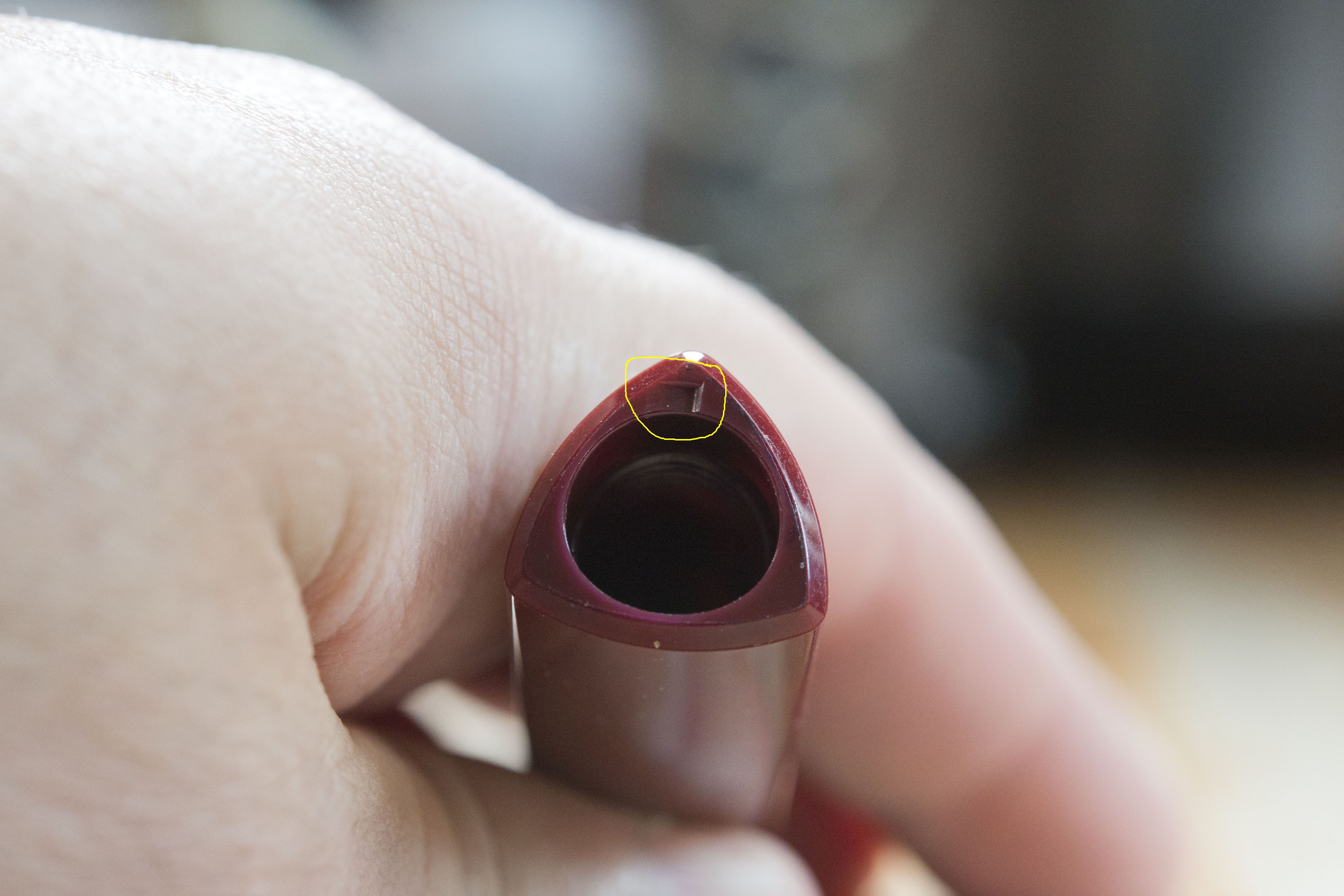 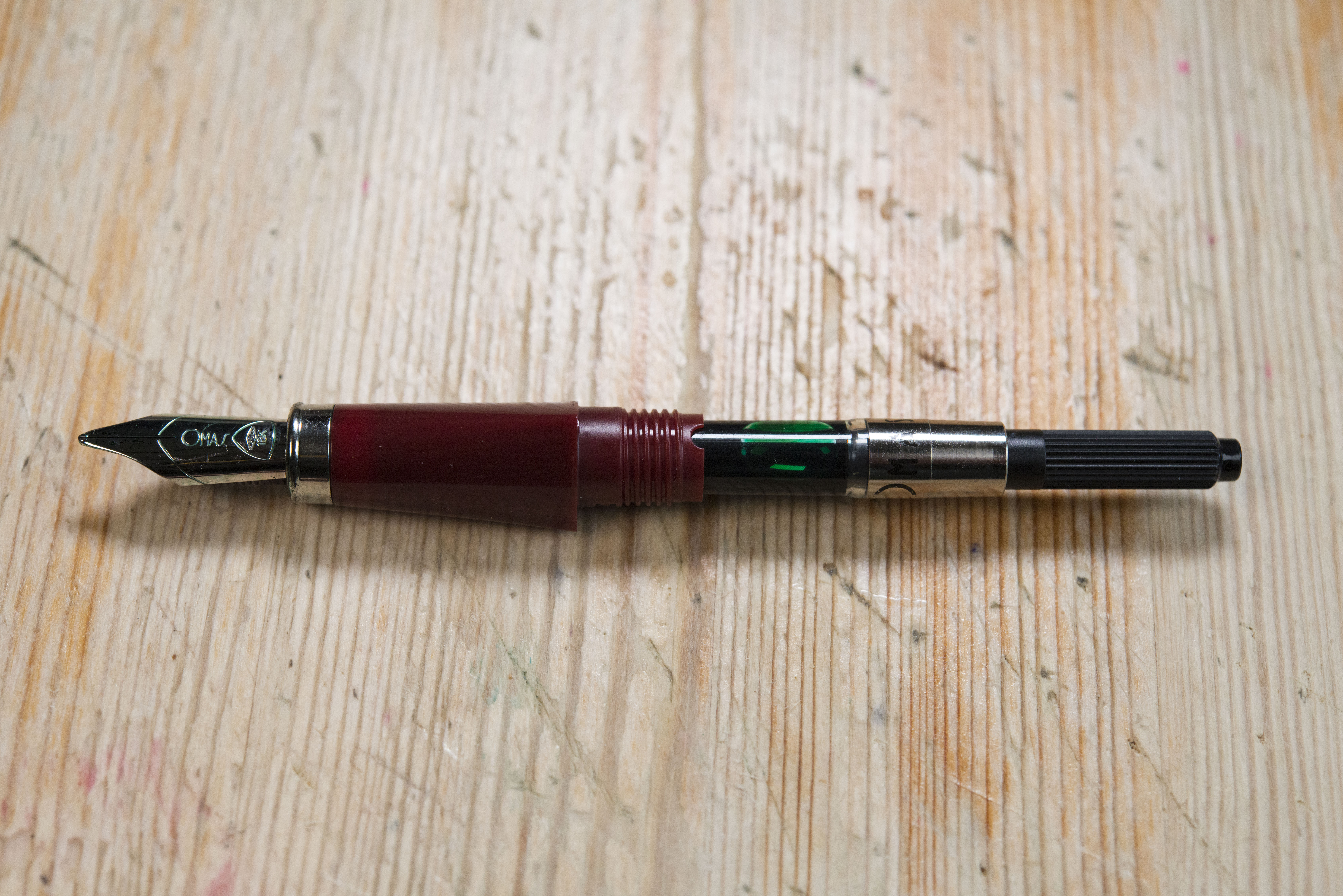 Of course the modern looks do help hide where cost savings have been made to help keep the price of this pen to a lower level (for an OMAS fountain pen that is).  The nib looks more like a size #5, certainly it is smaller than on the 360 Vintage and Ogiva.  The feed is plastic.  The filling mechanism is a cartridge converter, though easy to argue this is far superior and more reliable to the OMAS ACS system used in the Mezzo.  Additionally, the pen appears to have been injection moulded rather than hand/machine cut on a lathe.  There are sprew connection marks on the grip section and on the body, both marked in pictures above.  I can not see where they are on the cap and end finial but I’m certain they are present, just covered.  Still, while the pen may be injection moulded there are no seems and the finish is very well done.  The material is the cotton resin found on many other OMAS pens. 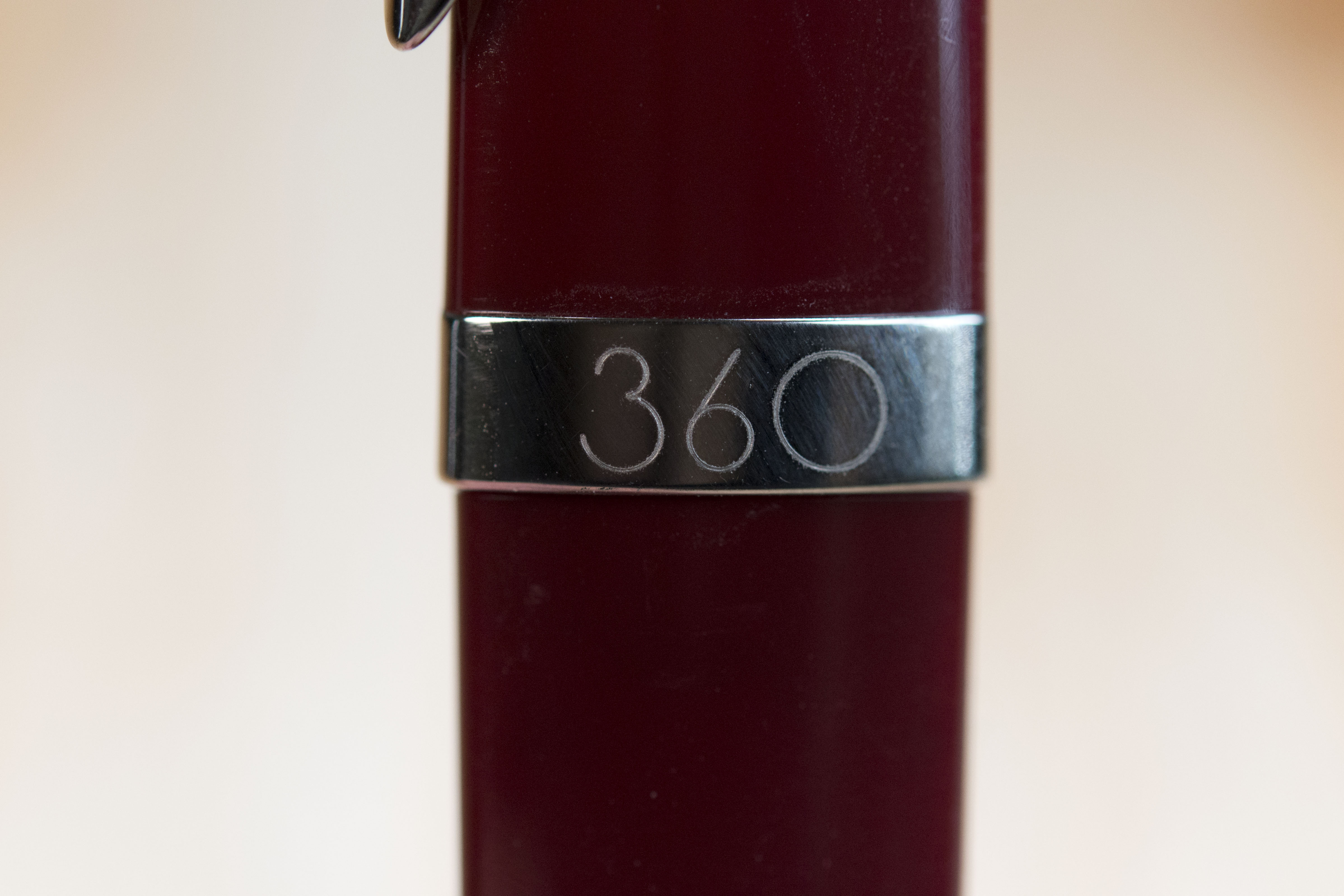 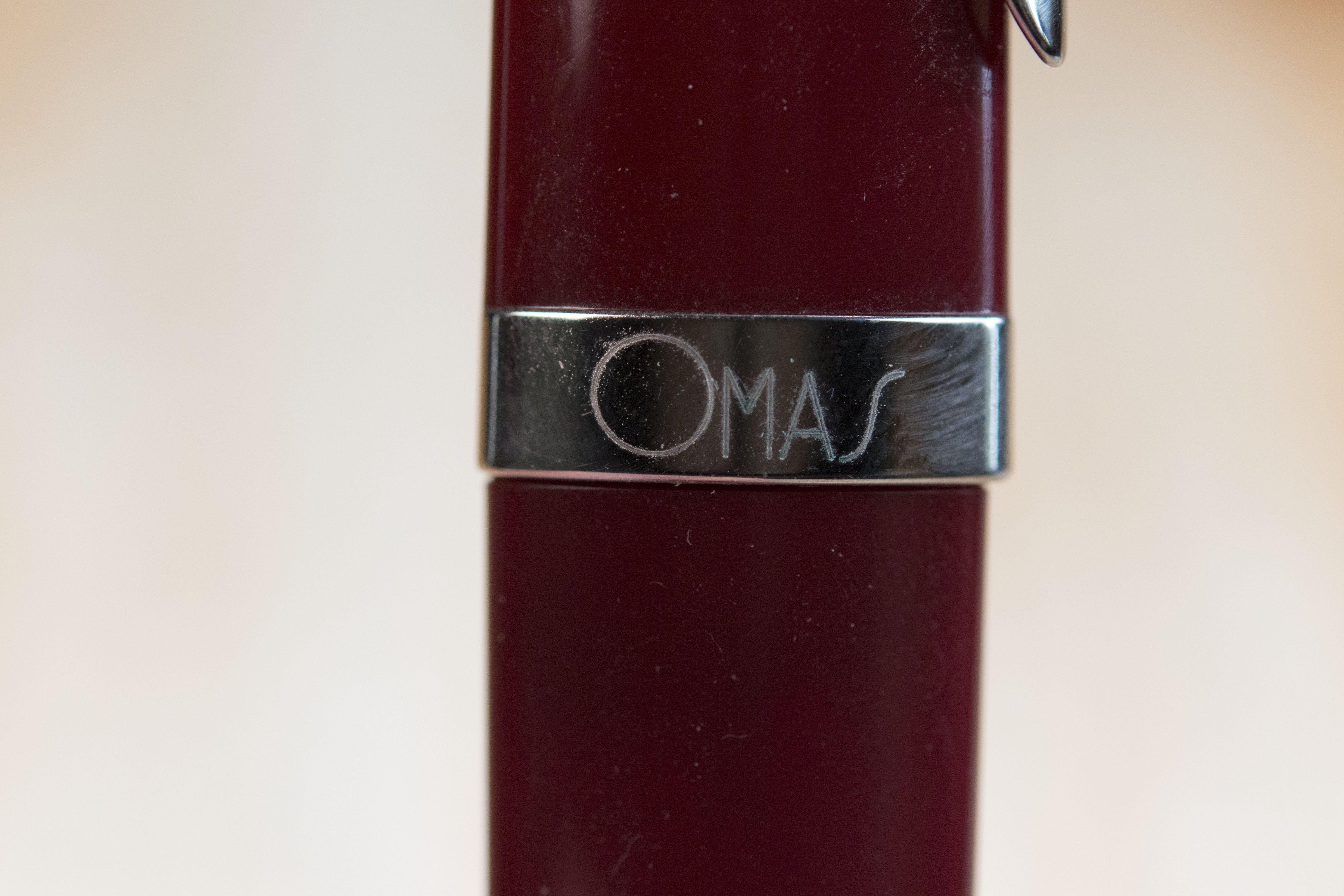 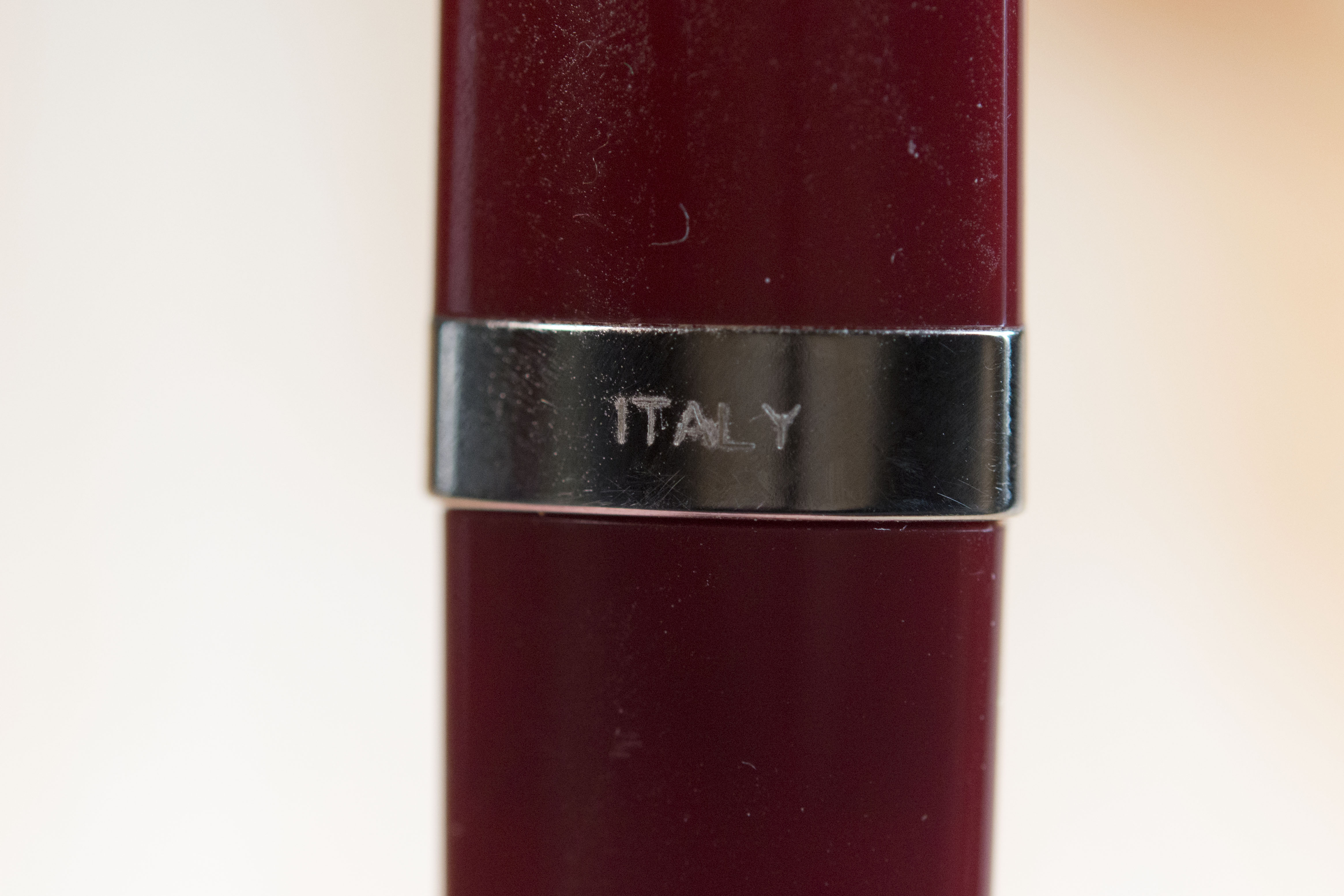 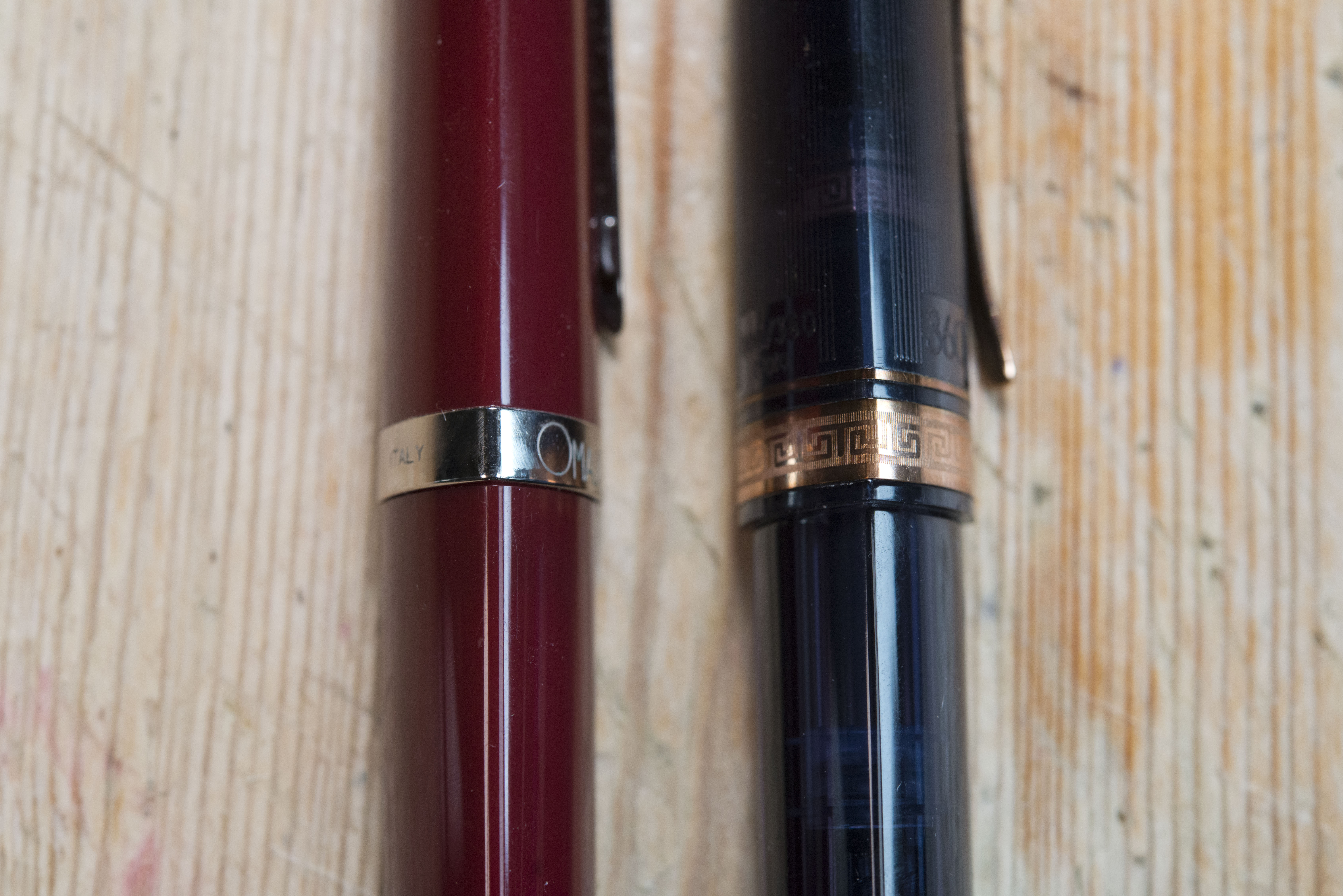 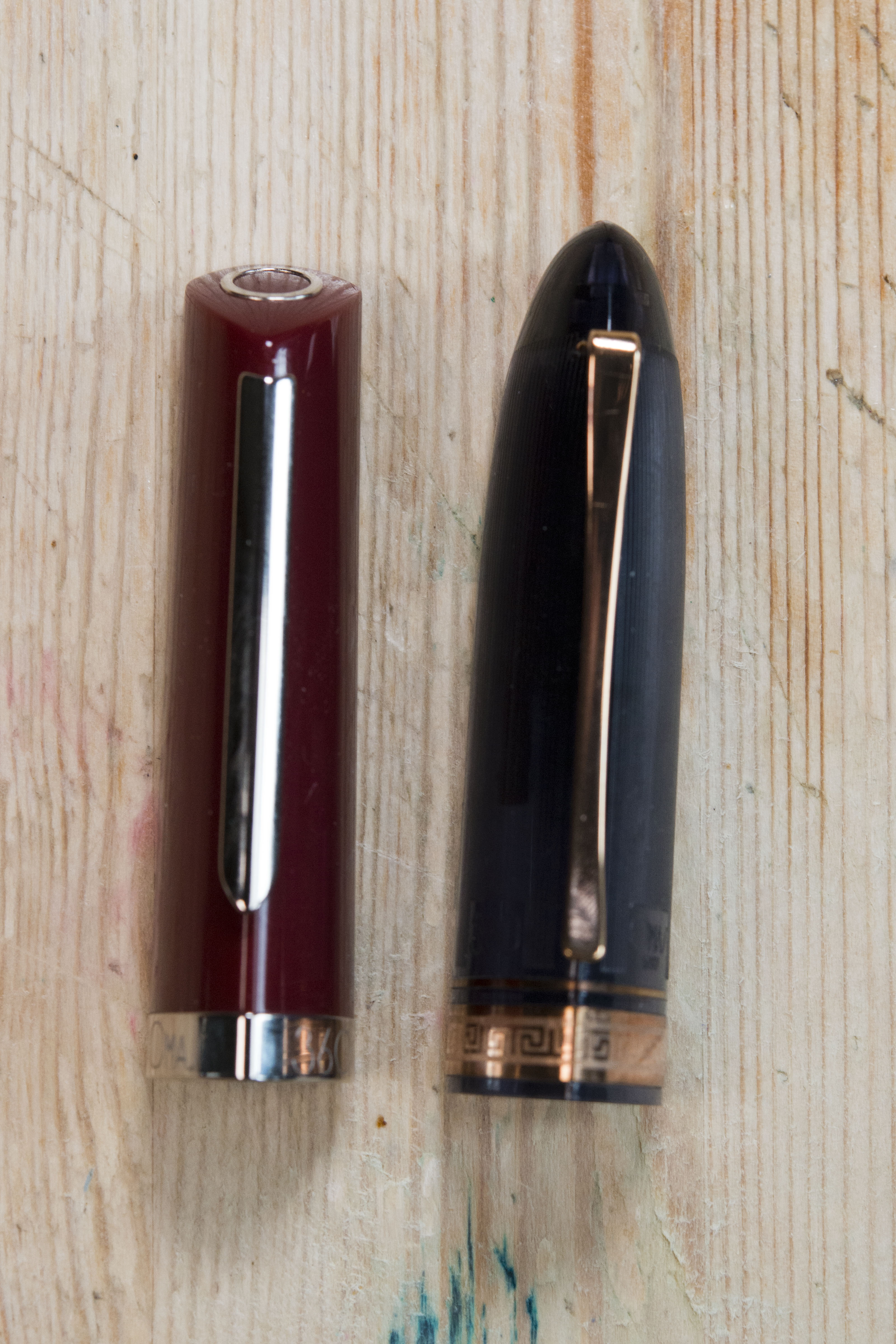 So lets compare the New model against the Vintage, both of these with an 18k gold broad nib.  Of note the difference between the Vintage and ‘normal’ models is the use of transparent cotton resin as the material, and the use of the Greek key as a pattern on the bands, where as look at non Vintage 360 and the metal work on most of those is plain. The clip is also different.  On then traditional version of the 360 it is a curved out sprung affair made from a single piece of metal. On the New it has a straight bar attached to a cross member which is secured within the cap. Both work well and feel secure and strong. 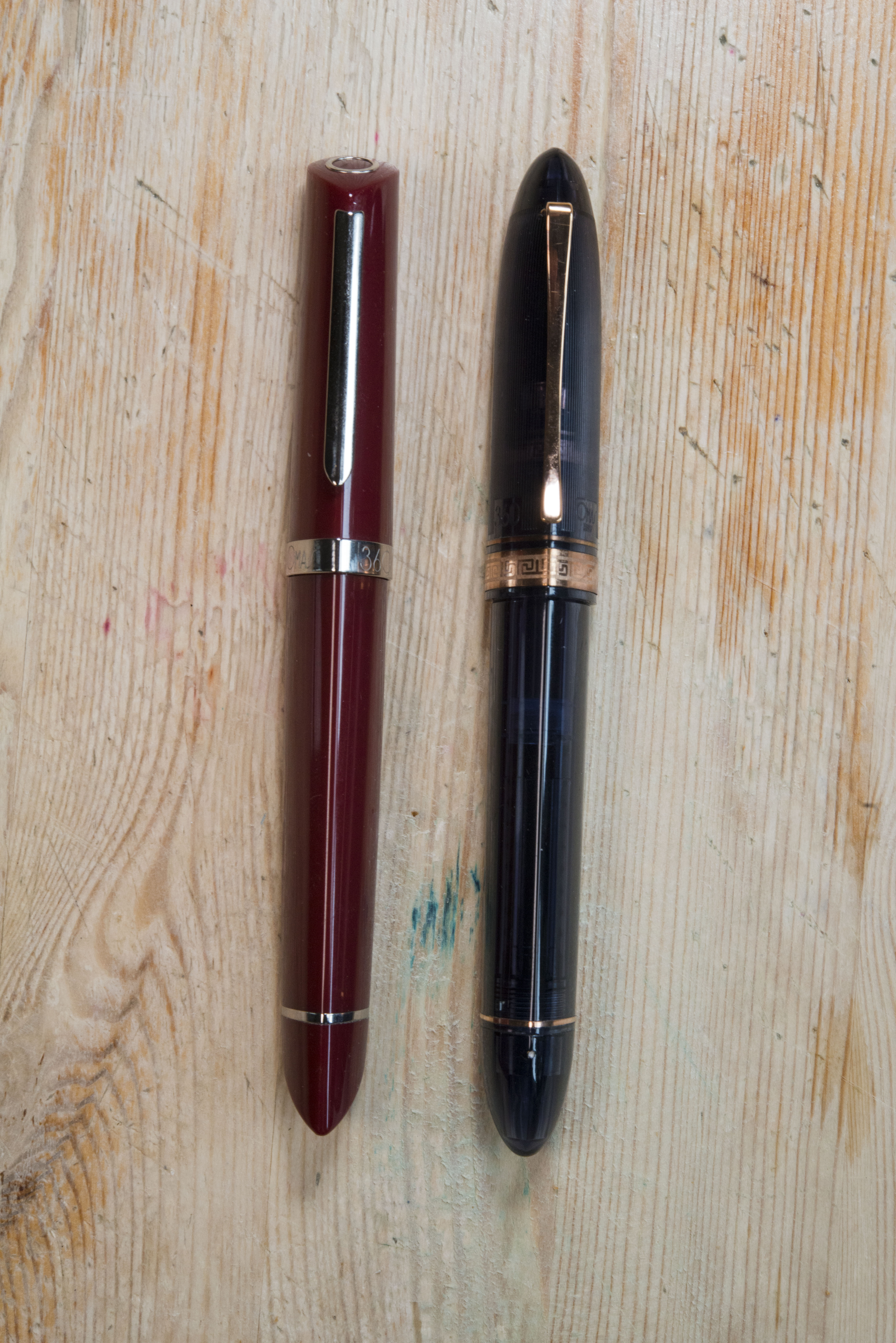 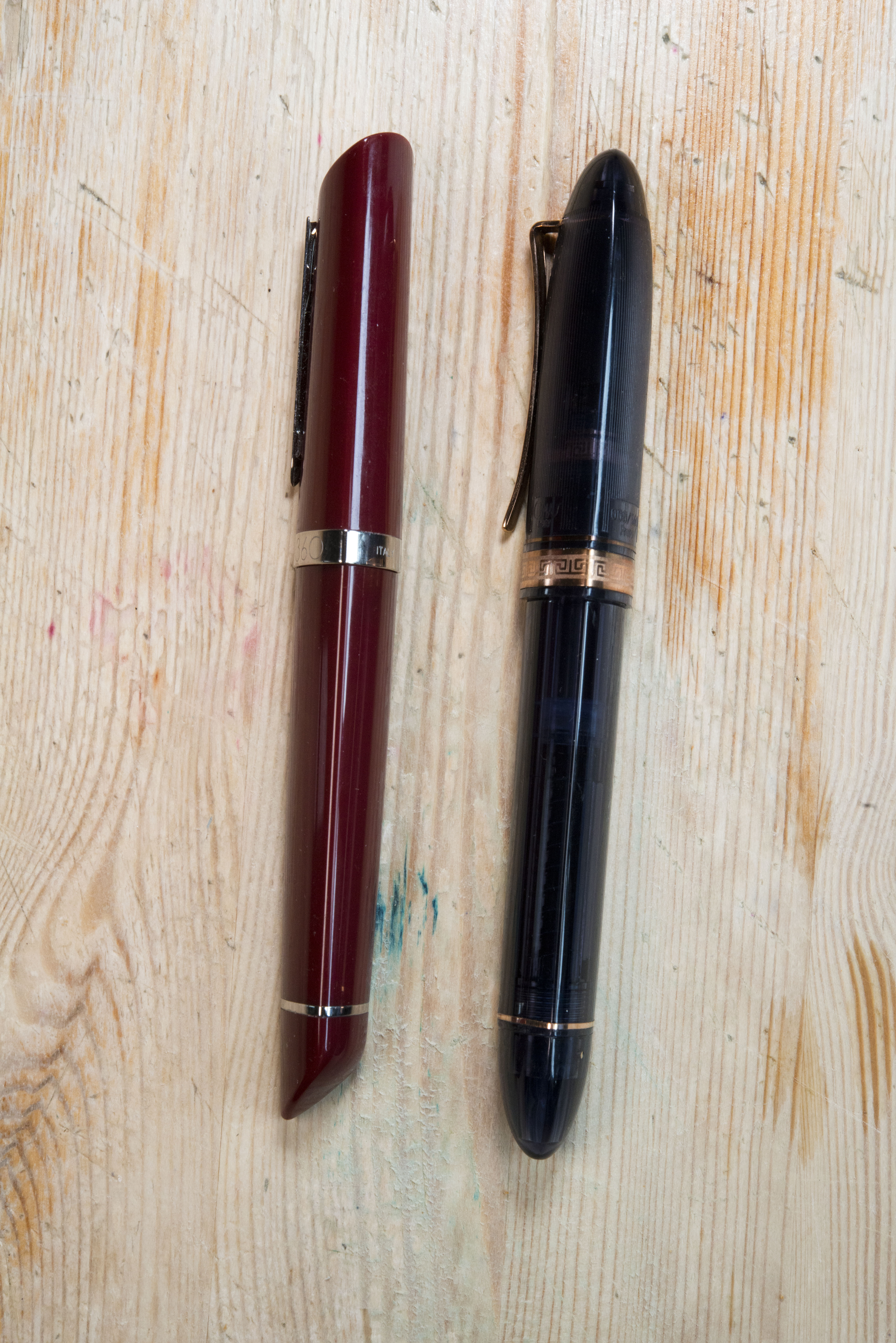 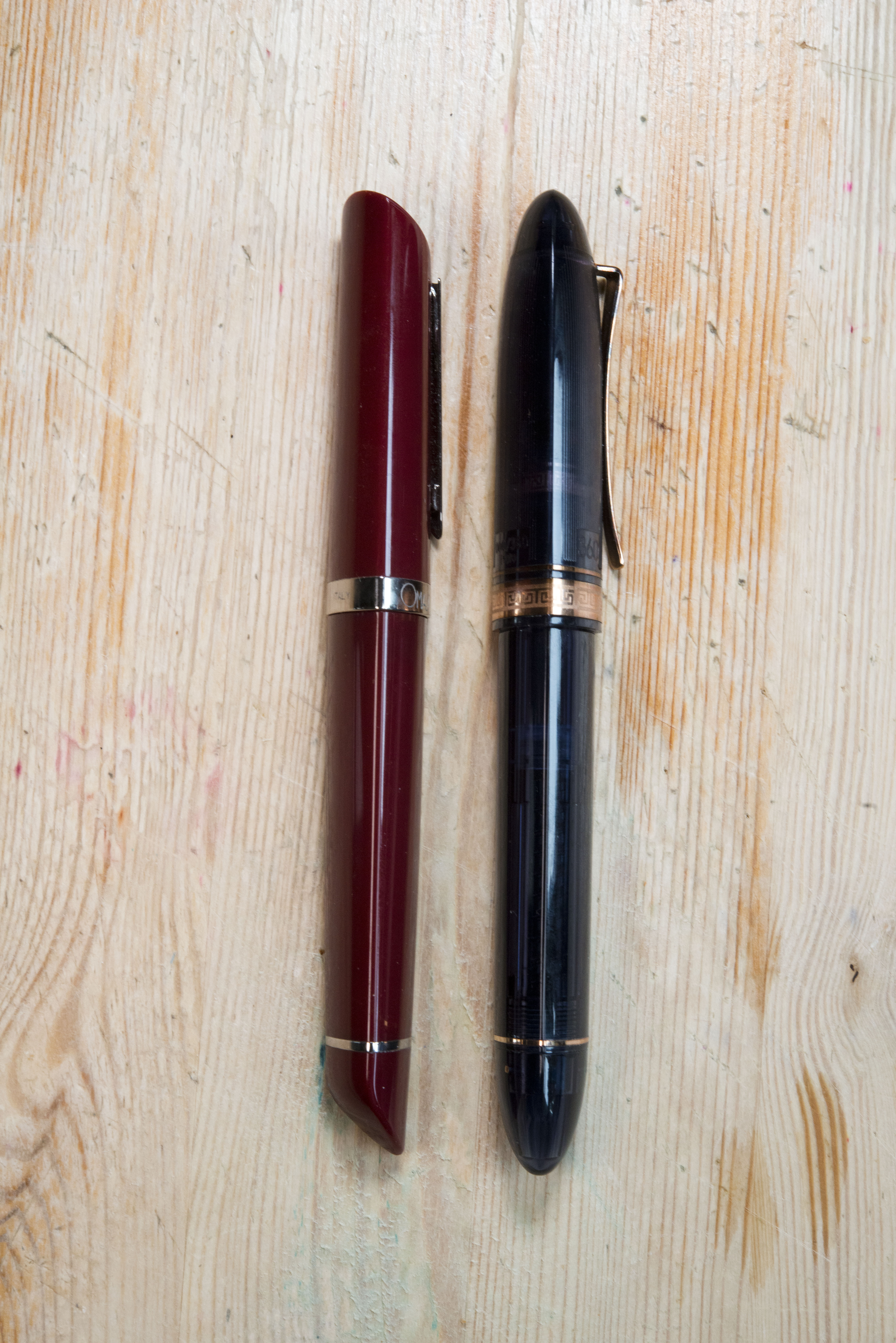 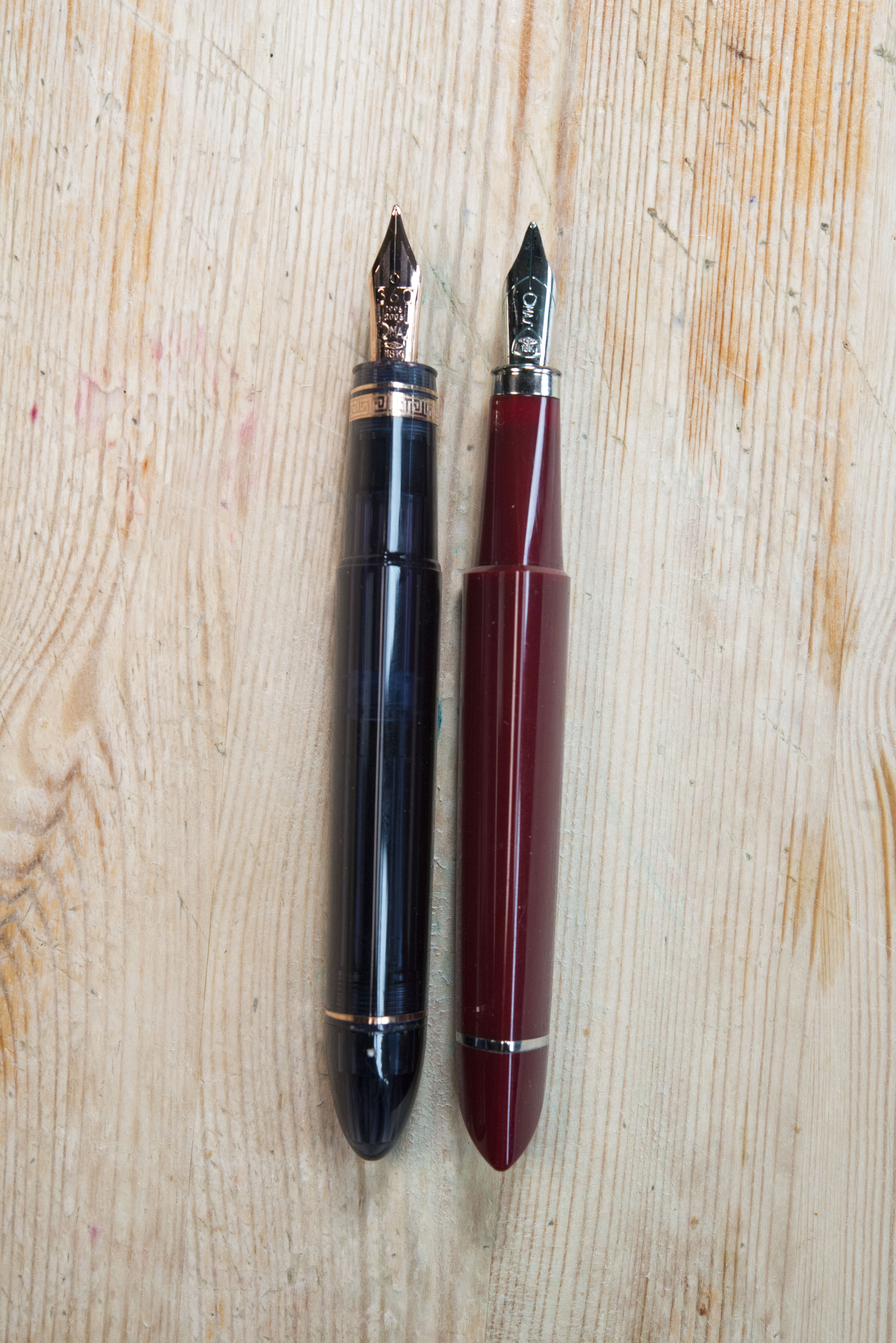 Size wise there’s actually not much in it.  Uncapped they are about the same length.  Width wise, the older model is ever so slightly wider in the body, however when it comes to the grip there is a big difference.  On the Vintage it is not only wider at the back but also only tapers down slightly, where as on the New it is thinner at the back and actually angles in a good thirty degrees, making it quite narrow by the nib, where also it rounds out to a more traditional tube shape.  Having said that most of the grip is still triangular with a slight outward curve, just like on the other 360s.  Personally I would like to think that if the New shape had continued that a Magnum version would have been launched – this certainly would have been interesting to me. 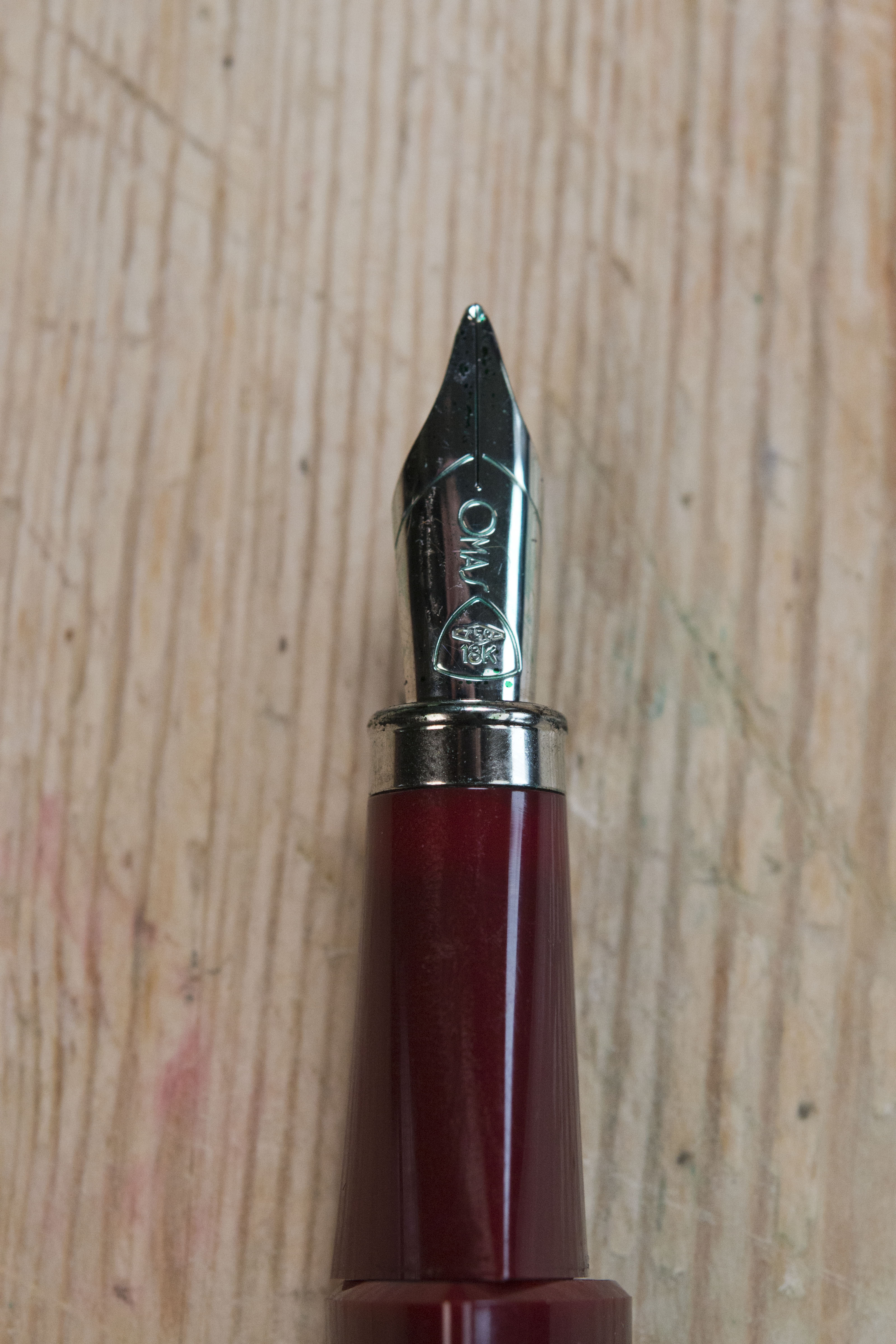 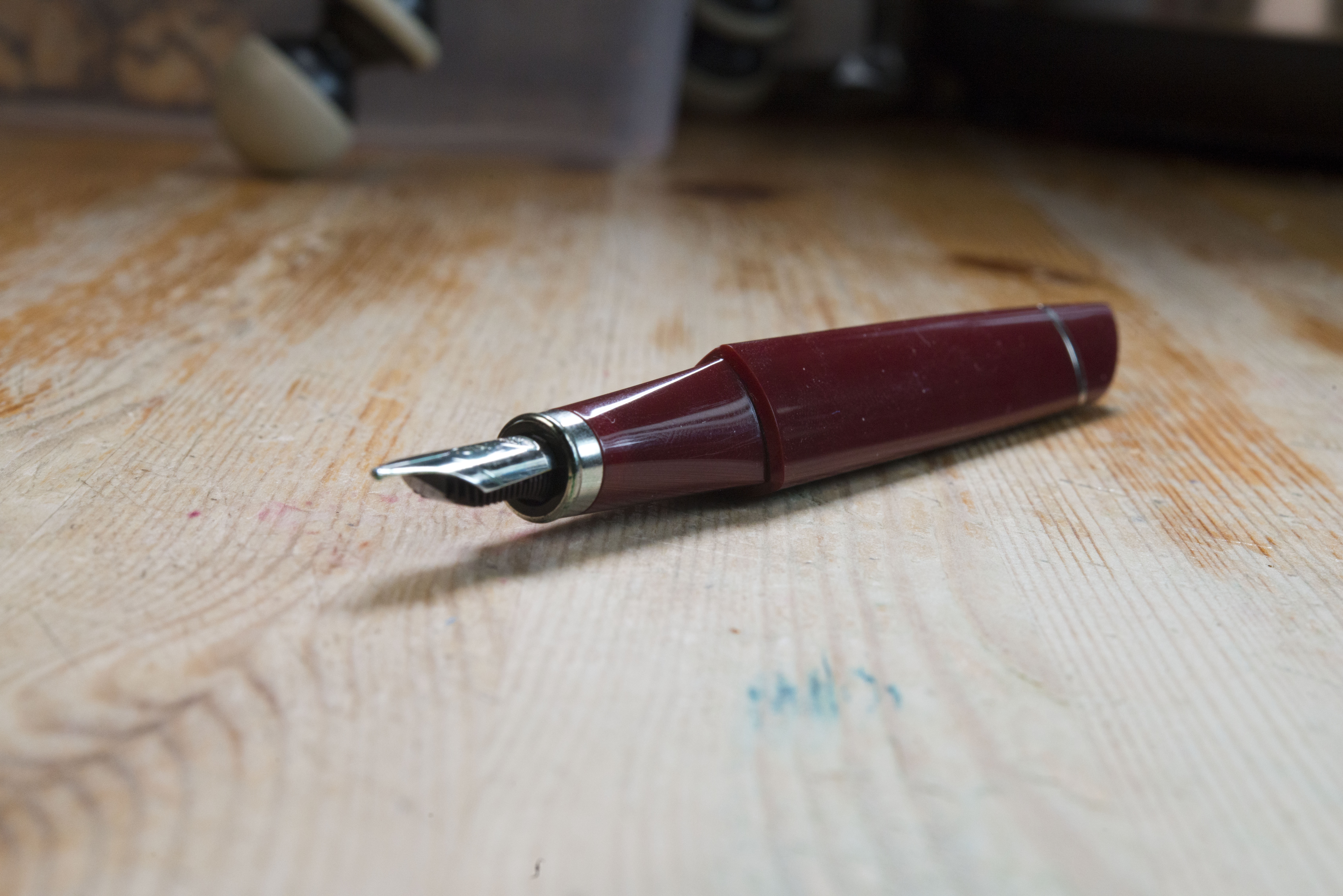 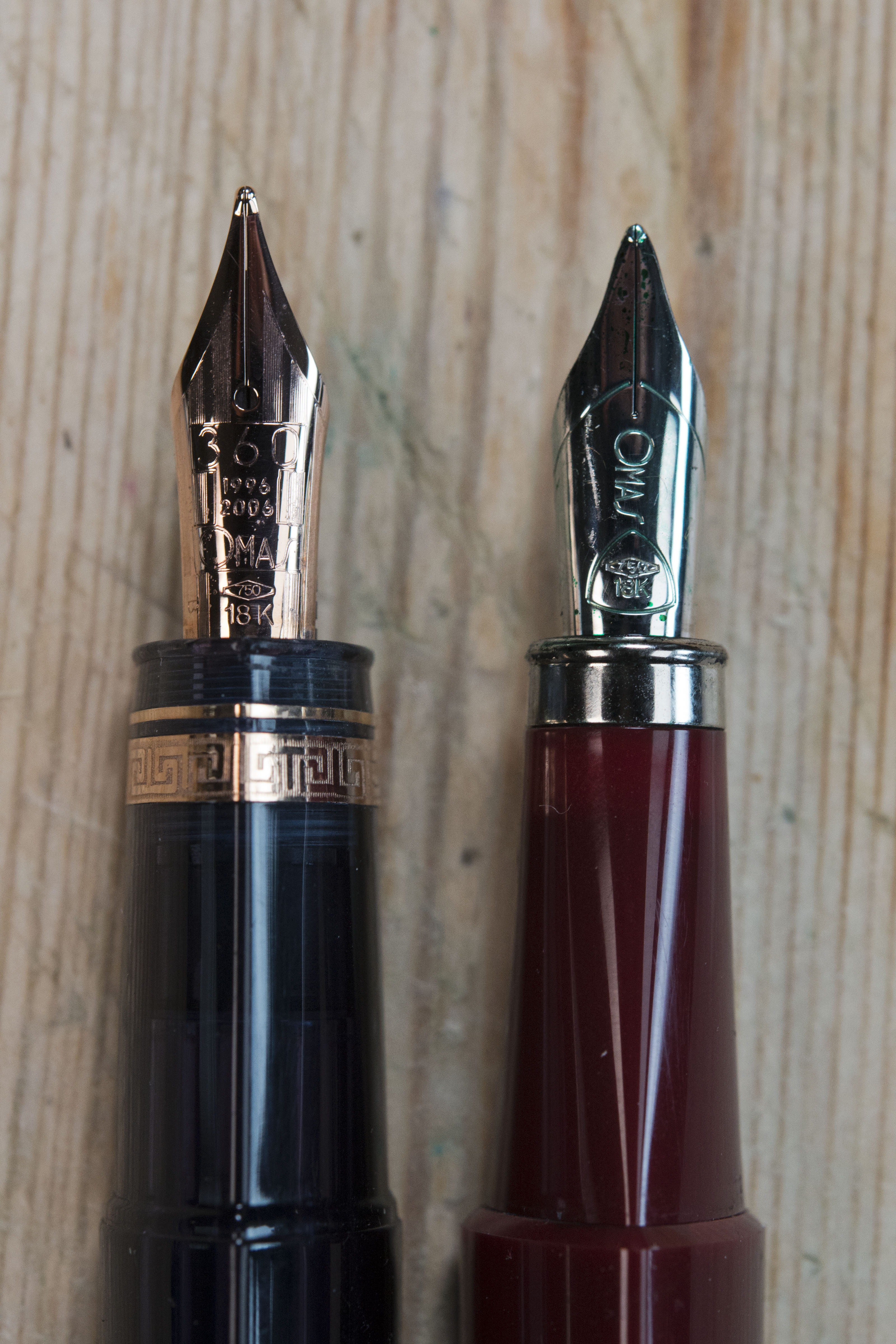 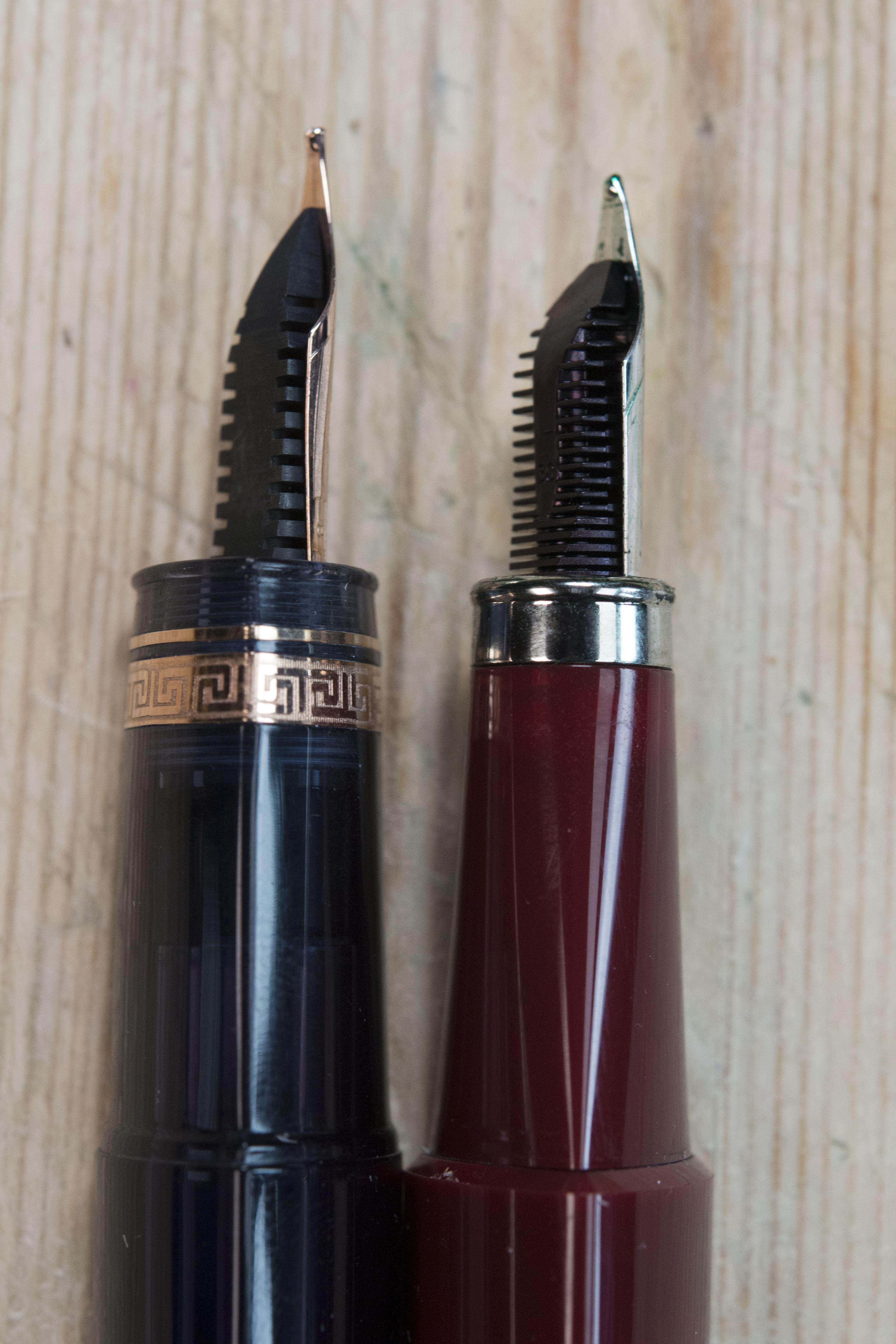 Looking at the nibs, the shoulders, where they fit in to the collar are actually about the same width, however the nib on the New looks to be a little shorter.  I’ve previously compared the 360 Vintage nib with those on an Ogiva Alba and a ScriBo Feel (as Scribo make their nibs and feeds with the same machinery OMAS used to) and they are the same aside from patterning and plating. 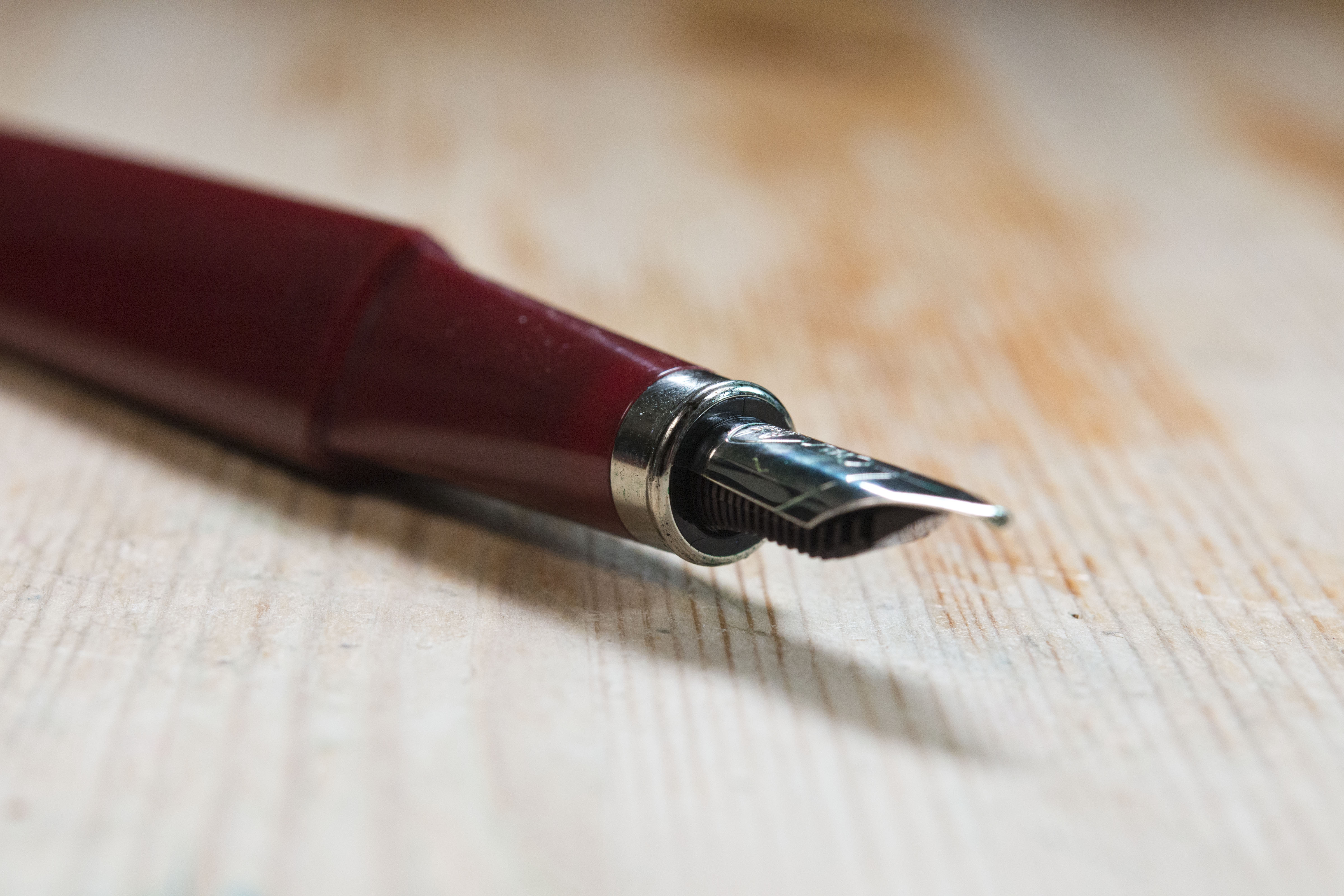 The end of the grip sections differ.  On the Vintage it is still triangular with the resin going to the very end, where as on the New it is round with a rhodium plated collar around it.  I would actually suggest this metal work is holding the plastic (?) collar ring in place. 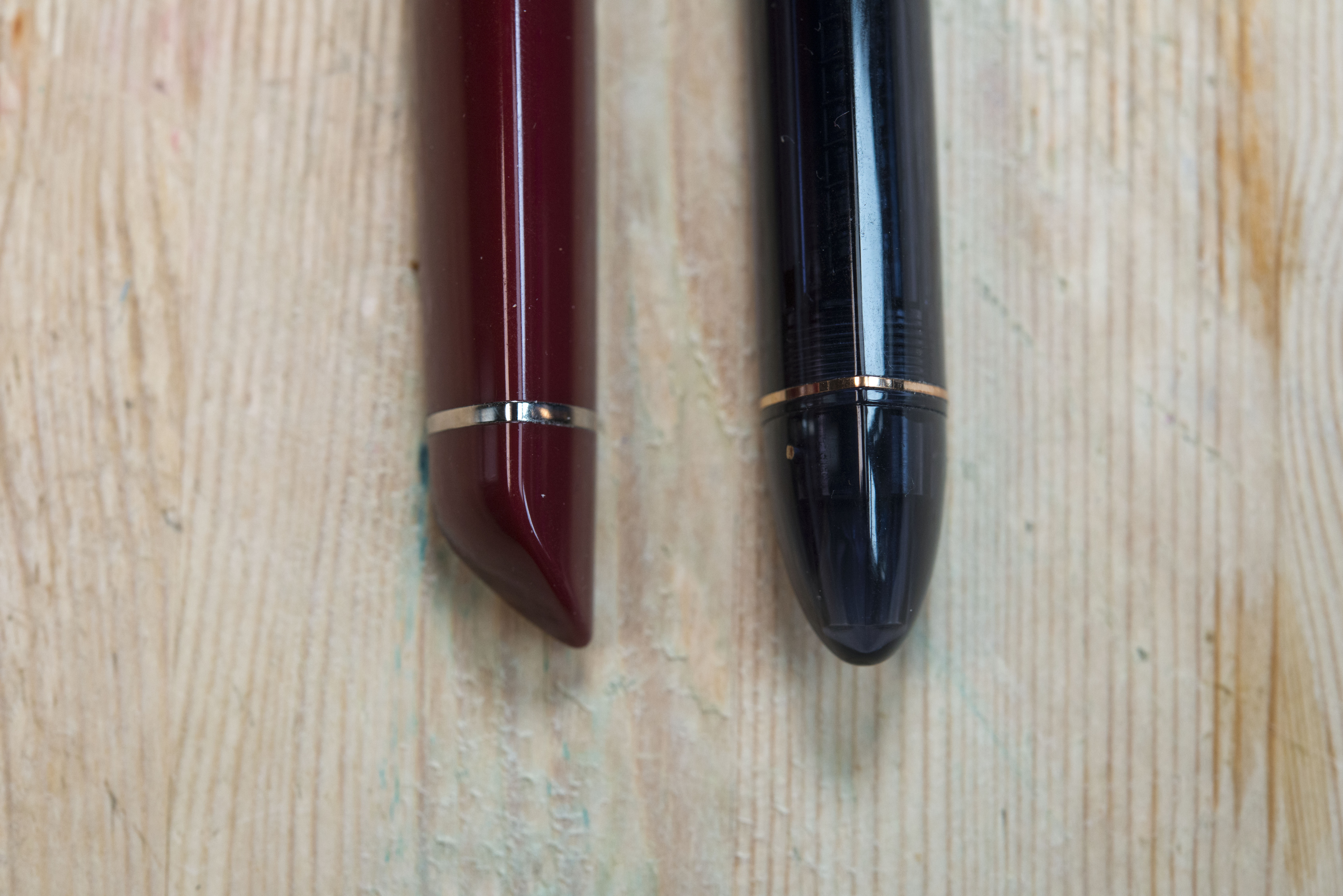 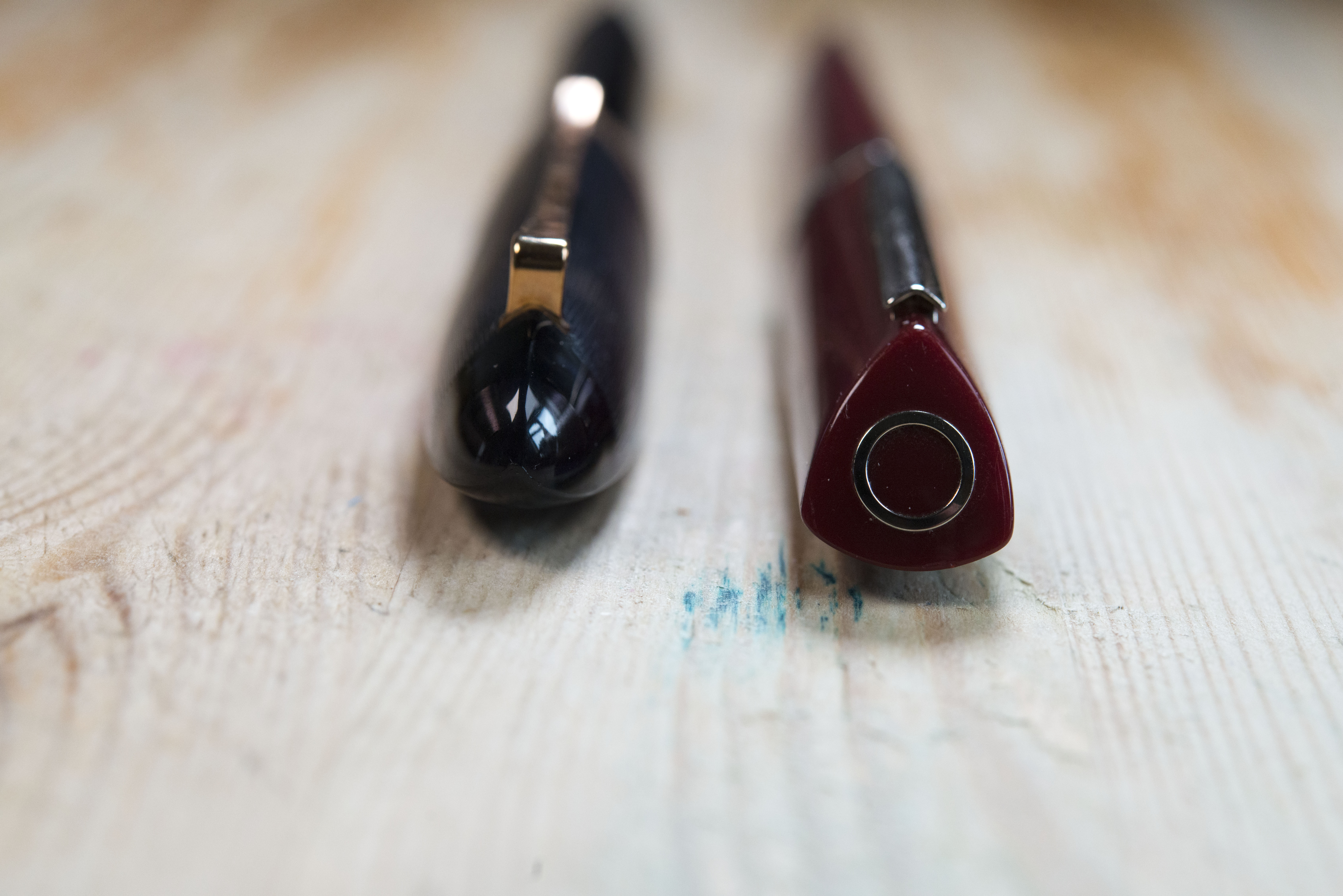 The end finials differ in shape but are about the same width at the metal ring.  On the Vintage is the piston turning knob, where as on the New it is fixed.

The filling mechanisms, as previously mentioned, are different.  Like on most OMAS fountain pens the Vintage uses a piston with the end of the barrel being the twisting knob.  The New is a classic cartridge/converter pen.  This differs from the Mezzo model, which will only take international short cartridges (the New possibly could take an international long as well).  Of the two I actually prefer the converter.  I’m relatively easy on my filling system, but piston fillers are harder to clean, and unless you have a demonstrator (like this Vintage, my Turquoise one or my Ogiva Alba) you can’t see how much ink you have left in the pen. 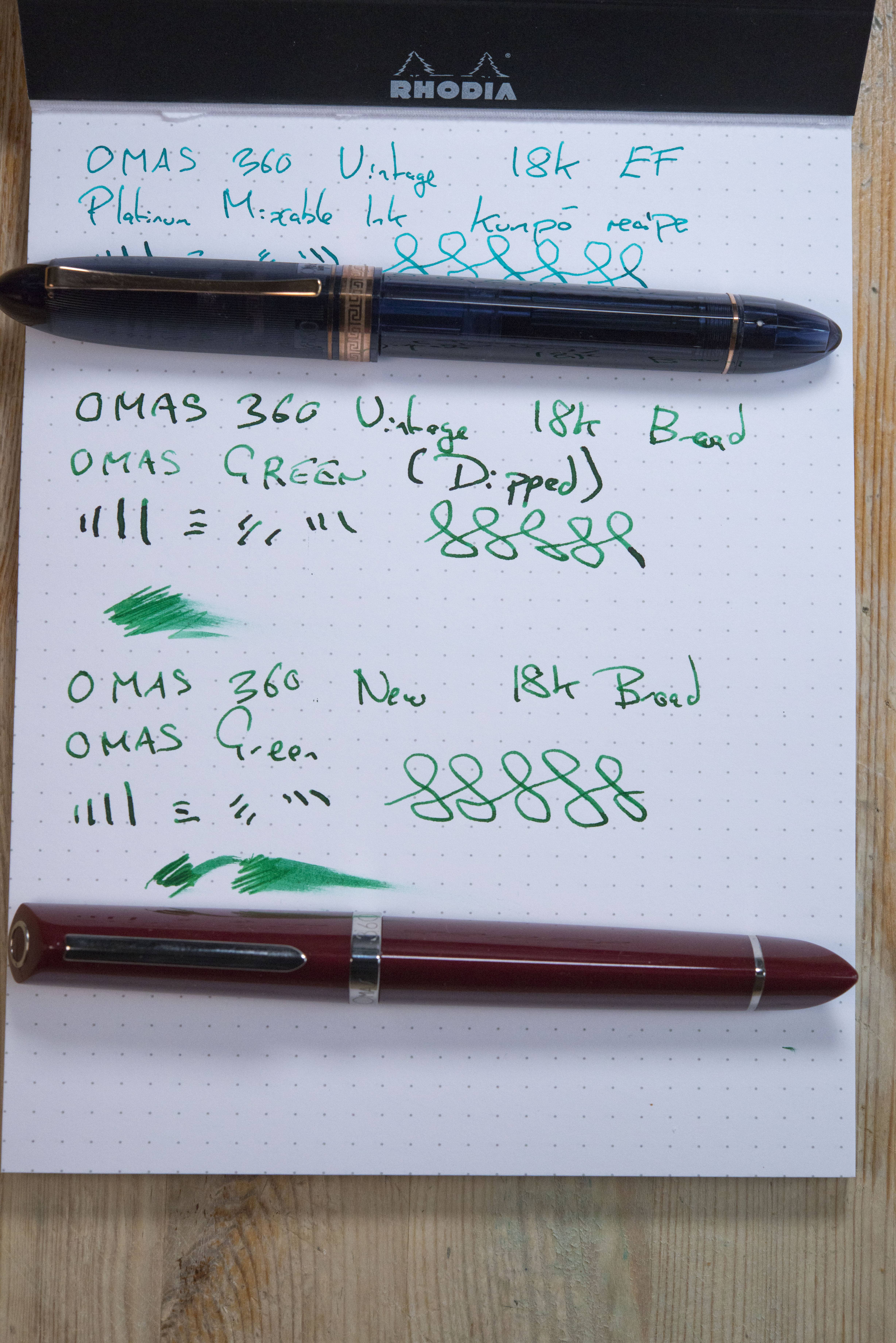 Writing experience wise.  The New was my first OMAS and drew me in to the brand.  If you like smooth and soft, it’s for you.  It is reasonably wet, however it is no where near as wet as the nibs on the other OMAS (and ScriBo) pens I have – which I part put down to the size.

So which do I prefer.  Well it’s not quite as clear cut as you might expect.  The fountain pen community did not seem to take to the New and it must not have sold that well by the fact it was dropped after just four or five years, added to which you can still buy it, NOS, today.  I actually rather like it and prefer the more modern looks, however for me the section is a little on the thin side and there is one issue which was behind me stopping using it and looking for a traditional piston filler 360.  I suspect if they had made a Magnum version which was also a piston filler then that might have been perfect pen for me (and being larger I would assume it would have the more normal OMAS nib and ebonite feed). 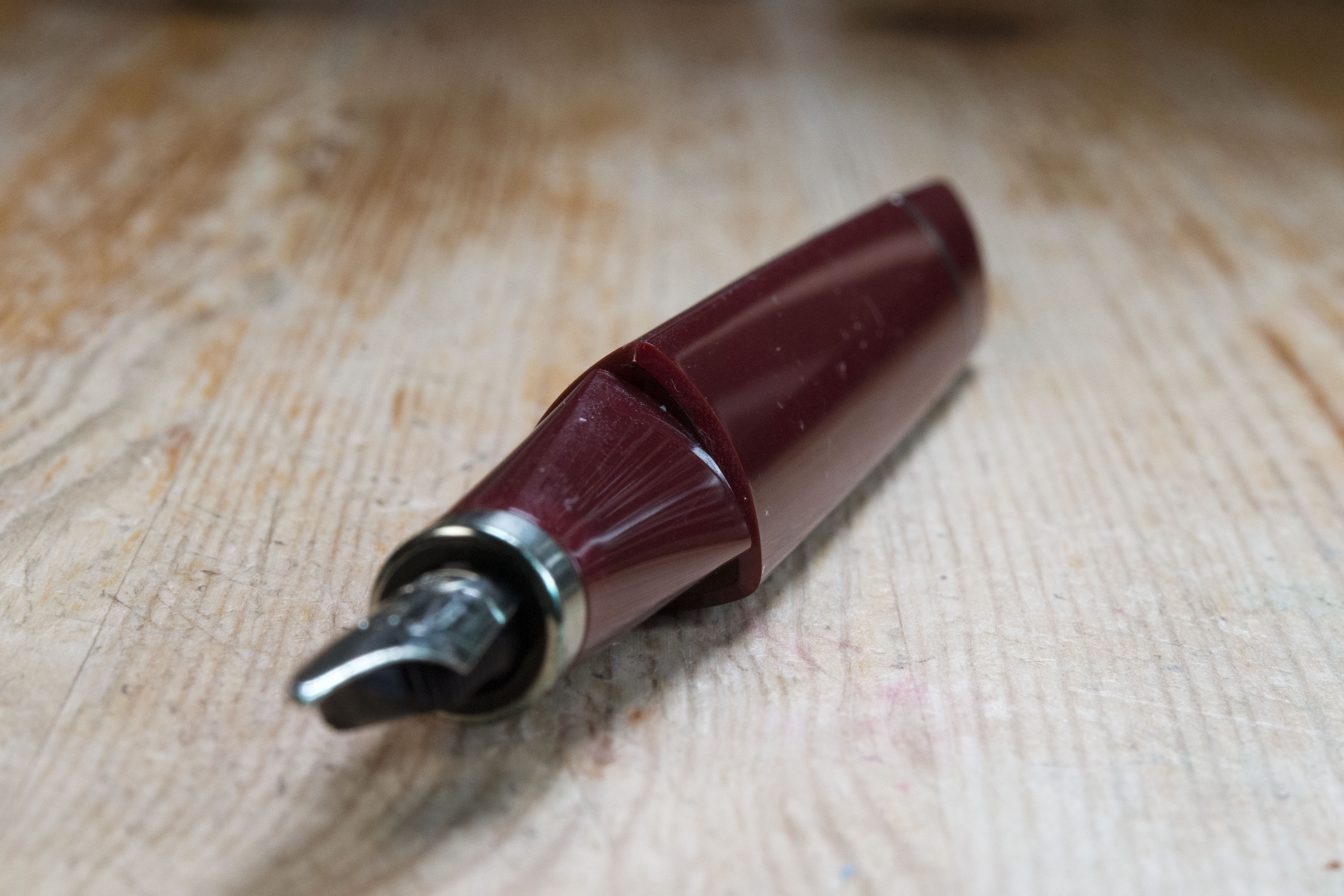 So what was my issue with my 360 New?  The barrel threads.  The pen was used as a daily writer at work for 1-2 years, however this is just note taking, so lots of cap on/off and finger positioning.  Over time the threads (which are cotton resin on cotton resin) started to loosen with the result that while writing the pressure from the back of my thumb would be enough to cause the barrel to start to unscrew.  It was the reason I originally started to look for a piston filler 360.