Back in 1996 OMAS launched a new, very different pen.  The 360.  A model it made in various forms right up to the closing of the company.  Arguably the most comfortable fountain pen ever produced (unless you are left handed) and rumoured to have been designed to force people to hold fountain pens correctly.  In true OMAS fashion there have been many versions and names.  Here I look at my two 360 Vintages, models from towards the end despite their name. 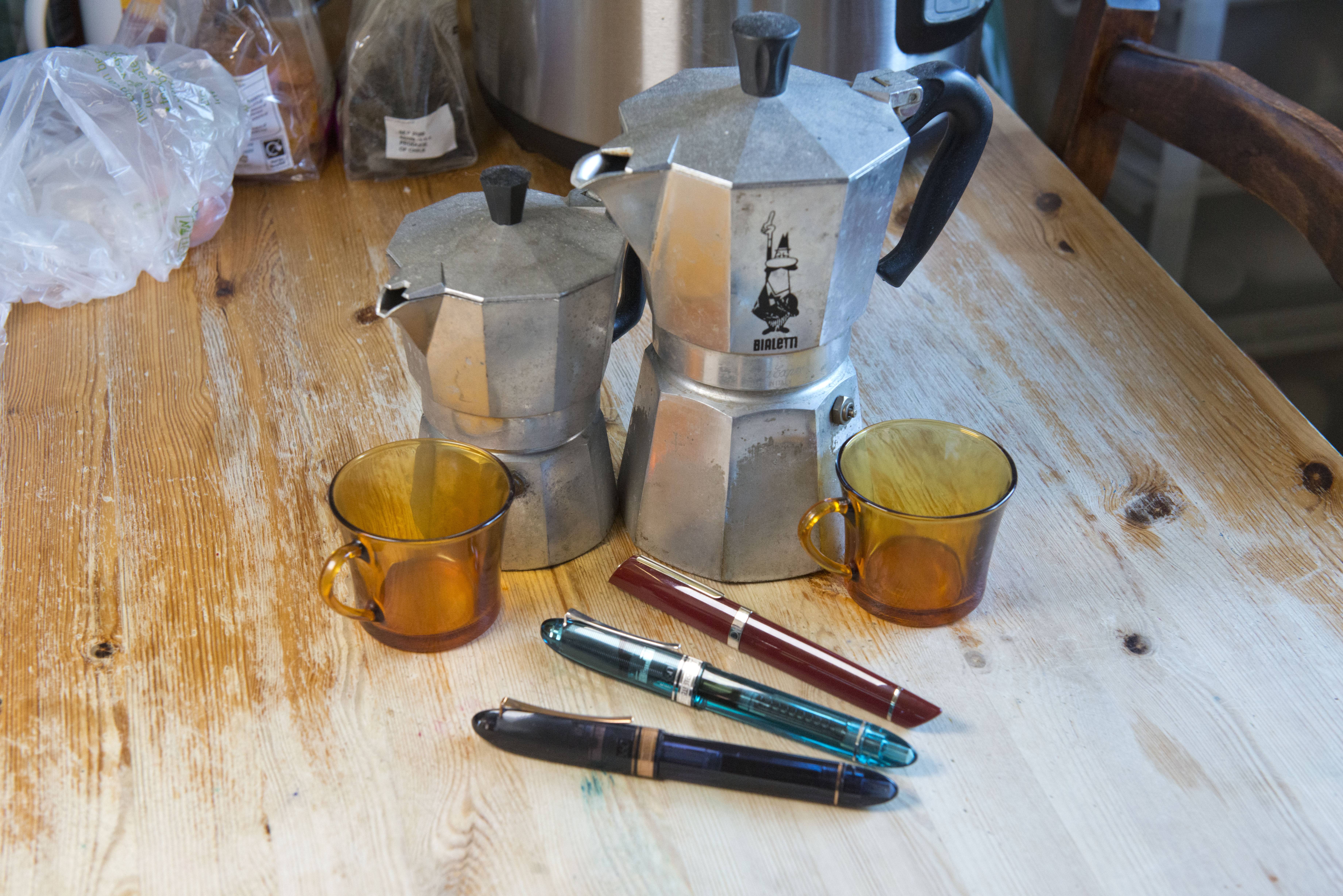 Couple of things to cover first.  Initially I was going to go over and compare all three of my OMAS 360 fountain pens (and I had previously mentioned this to a few people), however the differences with ‘New’ are so great that I’ve decided to cover it separately.

Second – with so many versions and model names I went on a search and found this very good thread on the FPN forums covering the pen, and thanks to Marco from Novelli Pens for posting the history behind the model (3rd page, post #58). 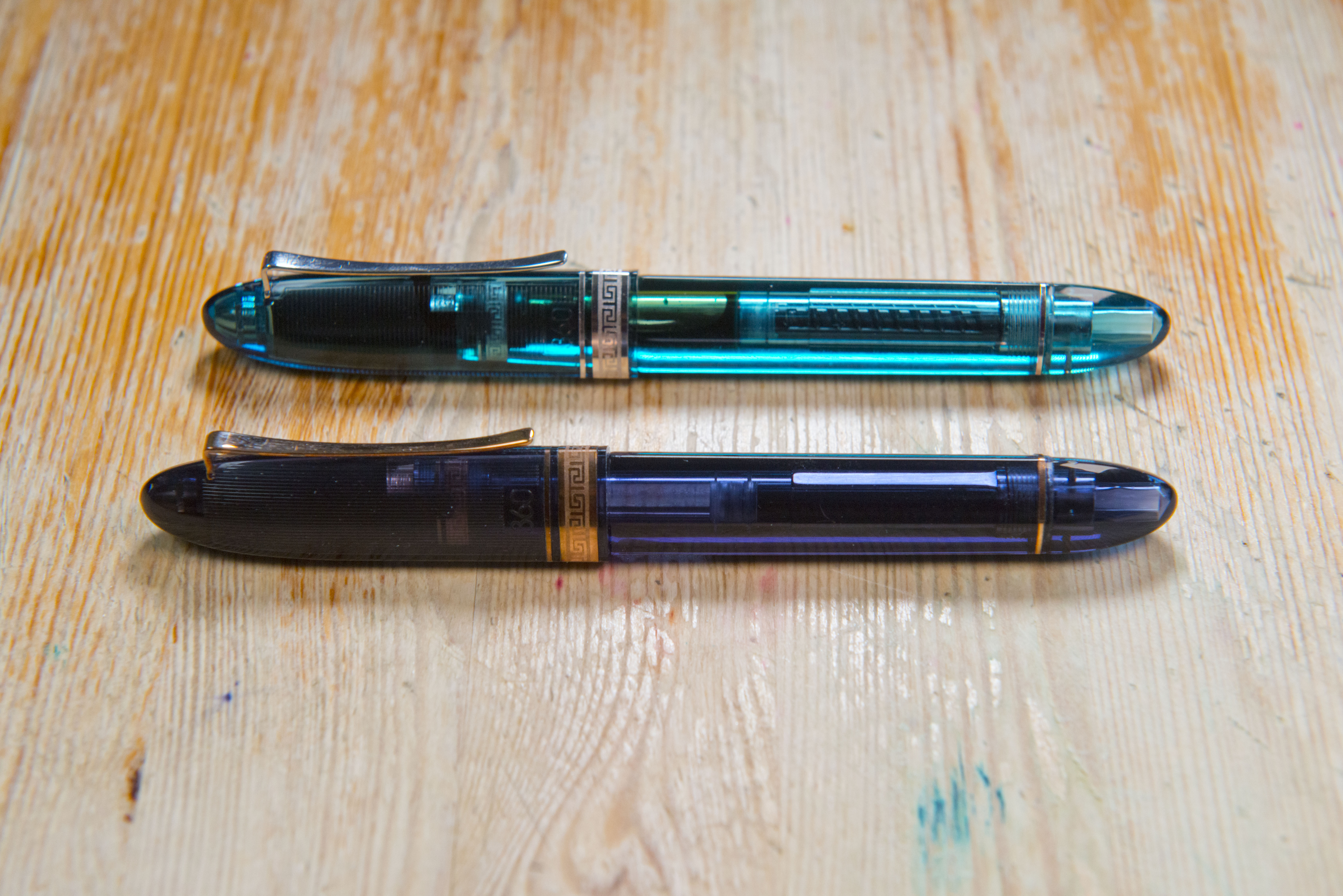 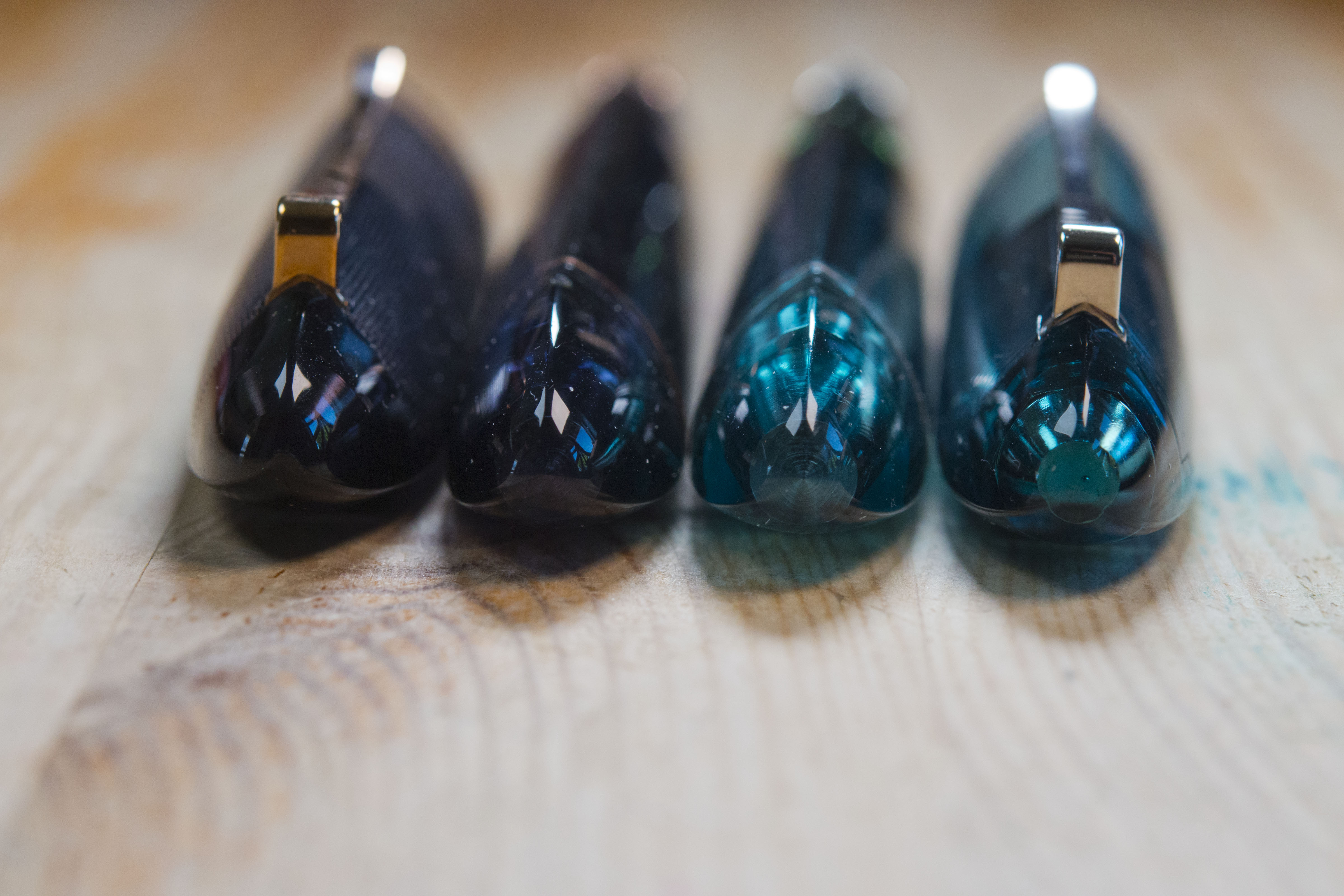 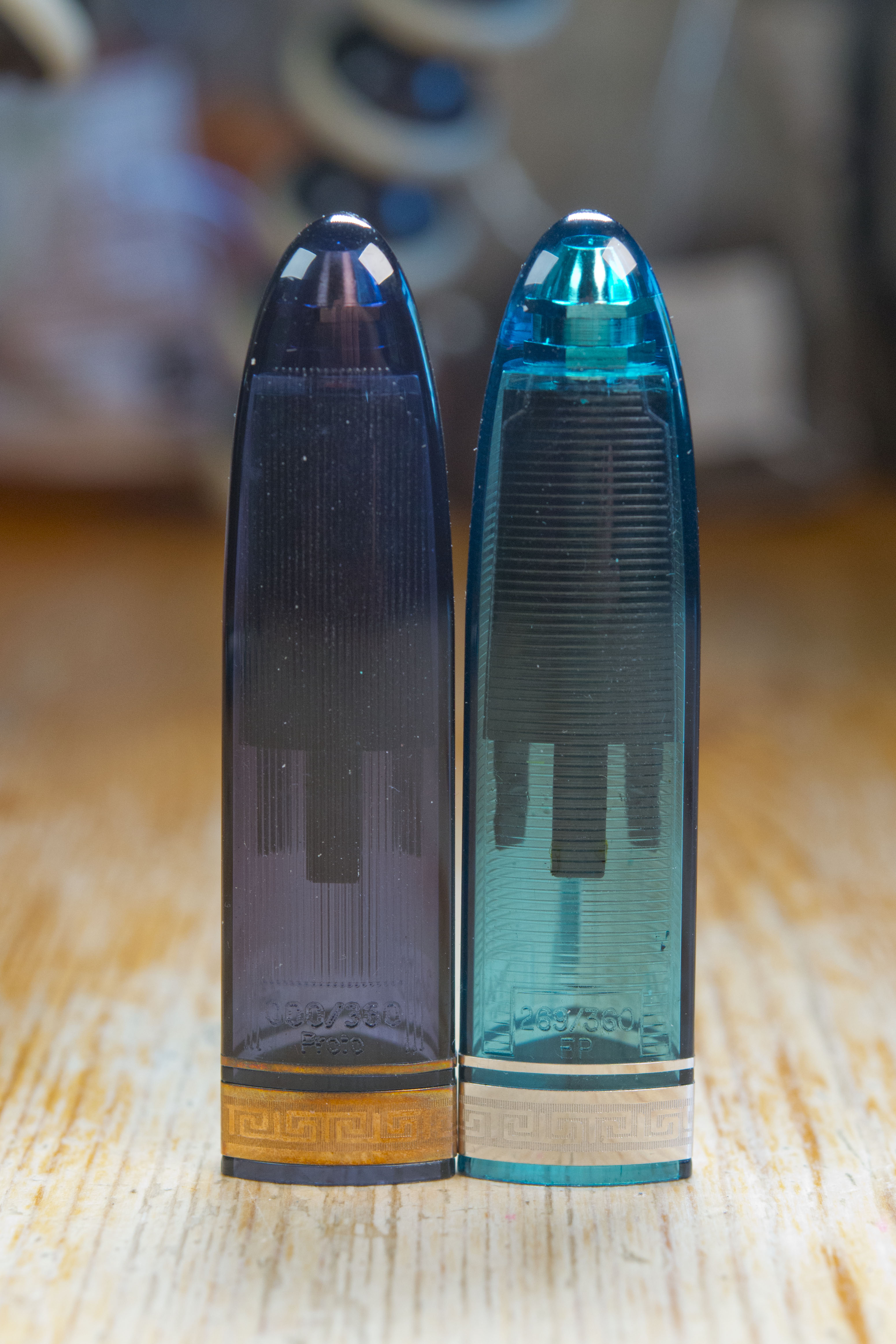 OMAS were not the first to bring out a design to force people to hold a fountain pen ‘properly’, after all Lamy launched the Safari back in the 1970s, however the way they went around it was different.  Looking at the Lamy, or any of it’s rivals (such as Pelikan’s Pelikano) it is only the grip section that is triangular, and the two points where the thumb and forefinger should rest are pinched in – this is one of the reasons many people find them uncomfortable as extra pressure is required to hold the pen, increasing strain on the fingers.  OMAS chose a different direction for the 360.  The triangular cross section goes along the entire length of the pen.  From cap tip to piston finial tip.  Even the material around the collar ring retains the shape.  Secondly the sides are neither flat nor pinched, but rather gently curve out.  It means your fingers feel as if they rest on the pen, rather than needing to press in.  There is no need to squeeze. 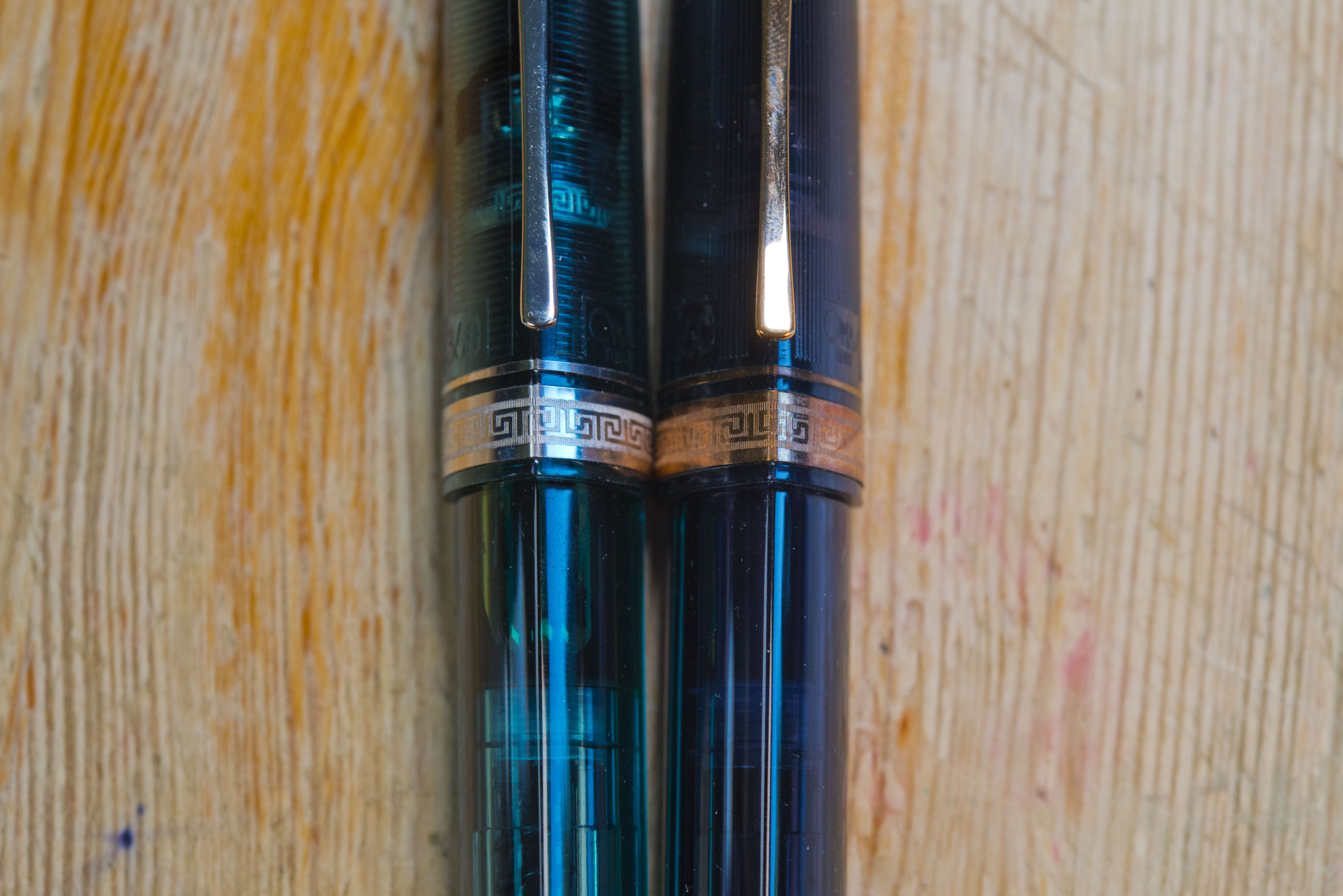 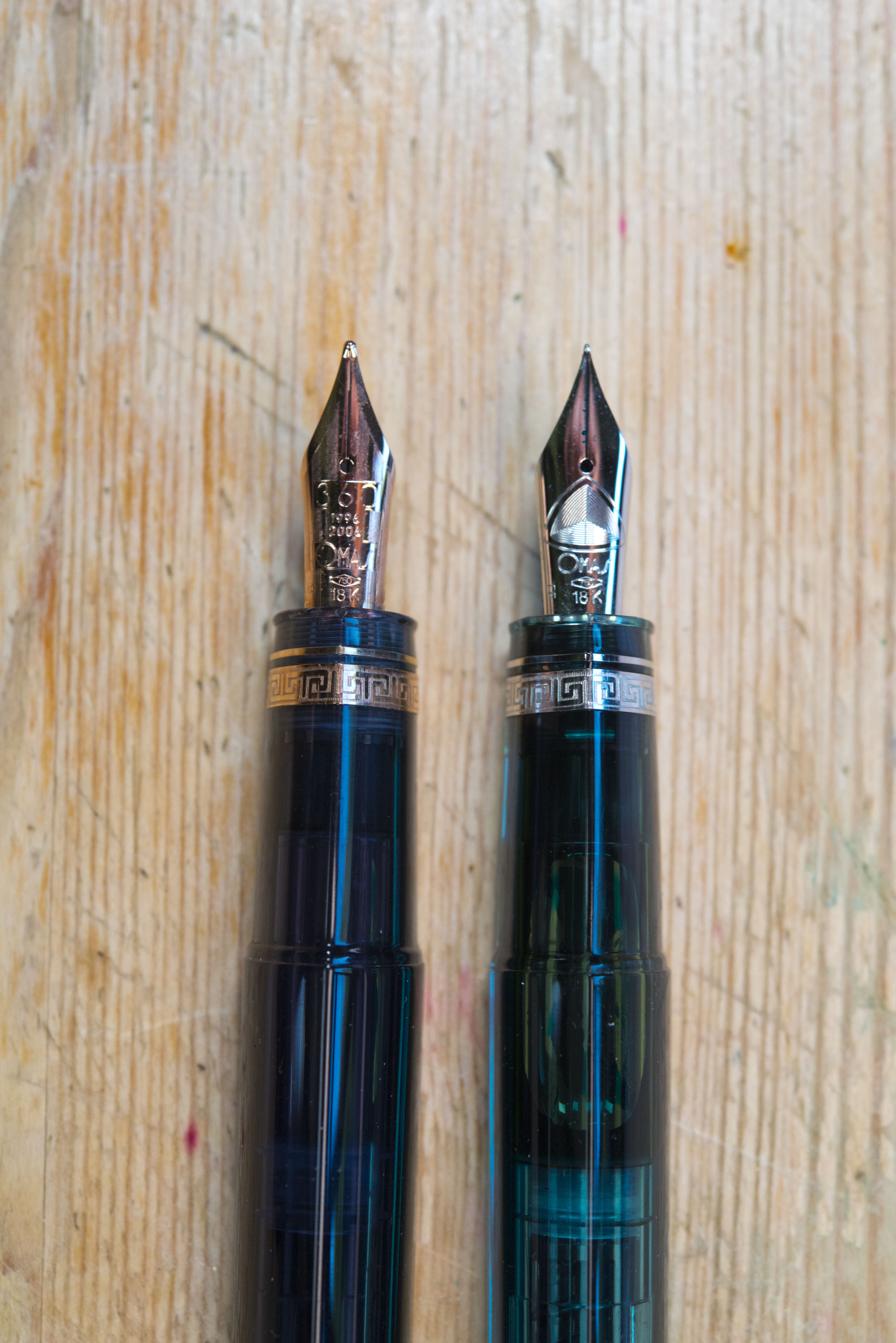 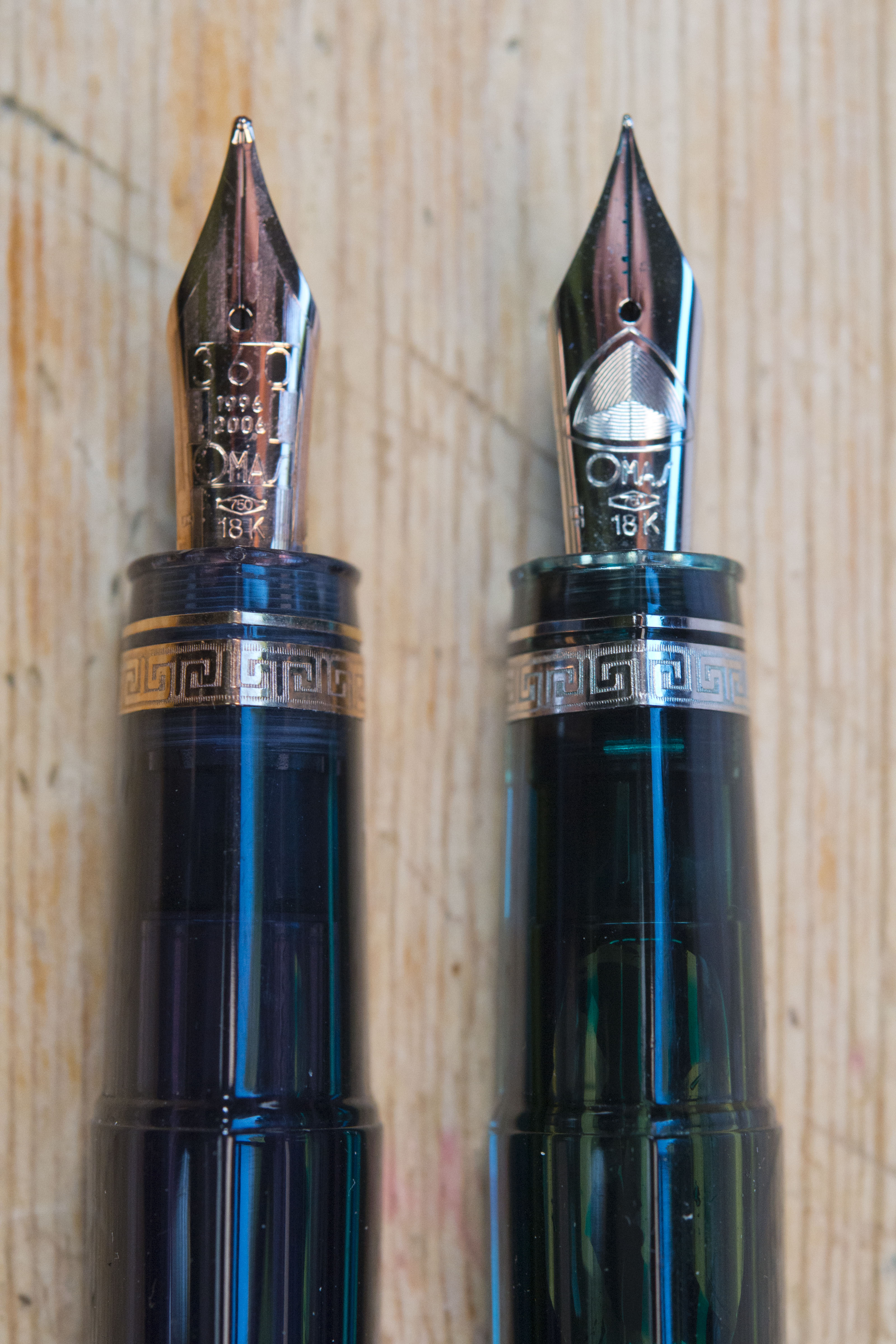 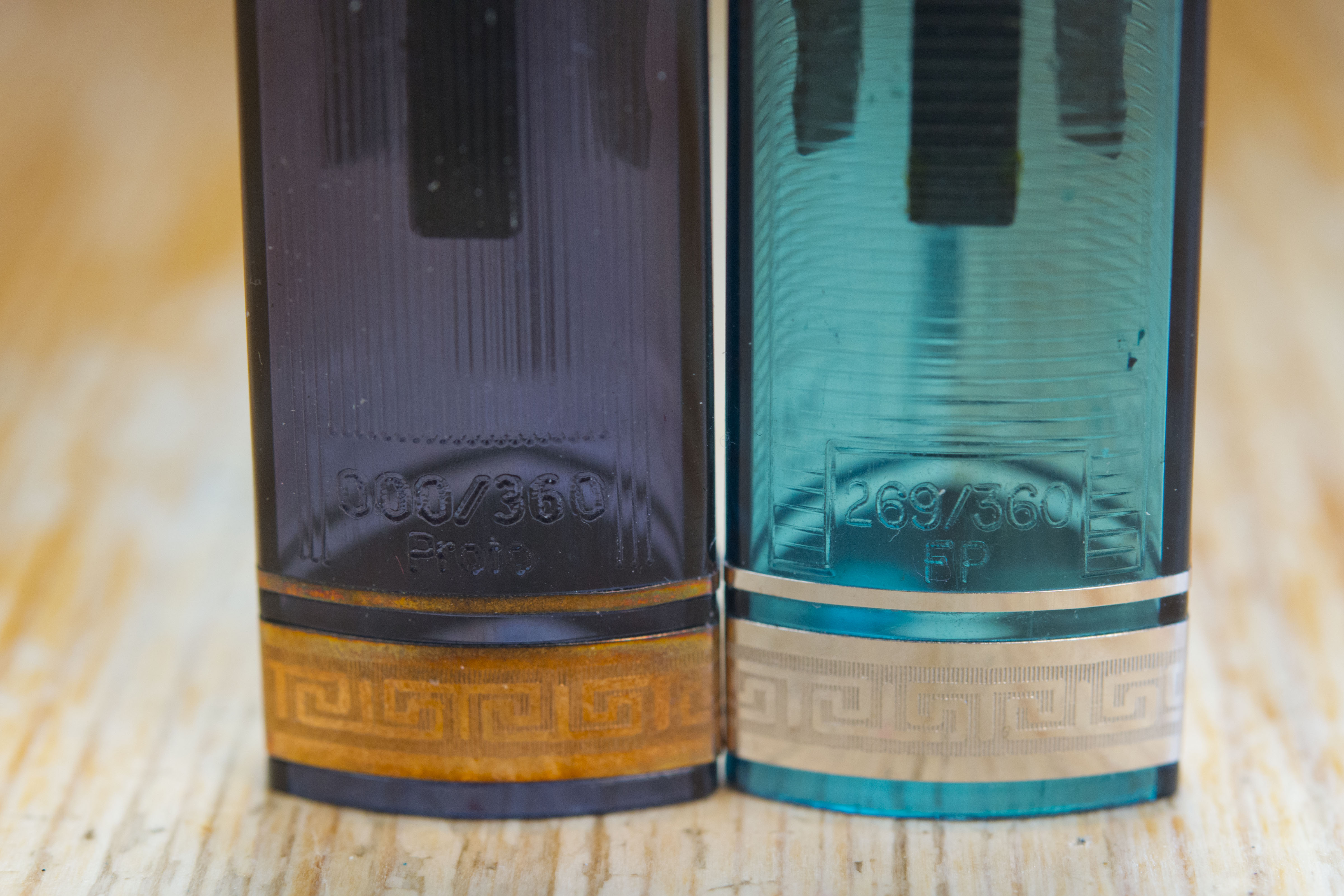 So what makes this model a vintage?  Well the term was used for a number of limited editions from 2011 onwards, all I believe were demonstrators (I’m happy to be corrected if some of the celluloid limited editions were also called Vintage).  Aside from that, they are the same size and shape as the original 360s, plus have the same piston filling system.  The two I have are the first and final/third Vintage models with the dark blue and rose gold trimmed version coming out in 2011 and the turquoise with Hi-Tech (rhodium) finishing model in 2012 (there was a red model between the two). 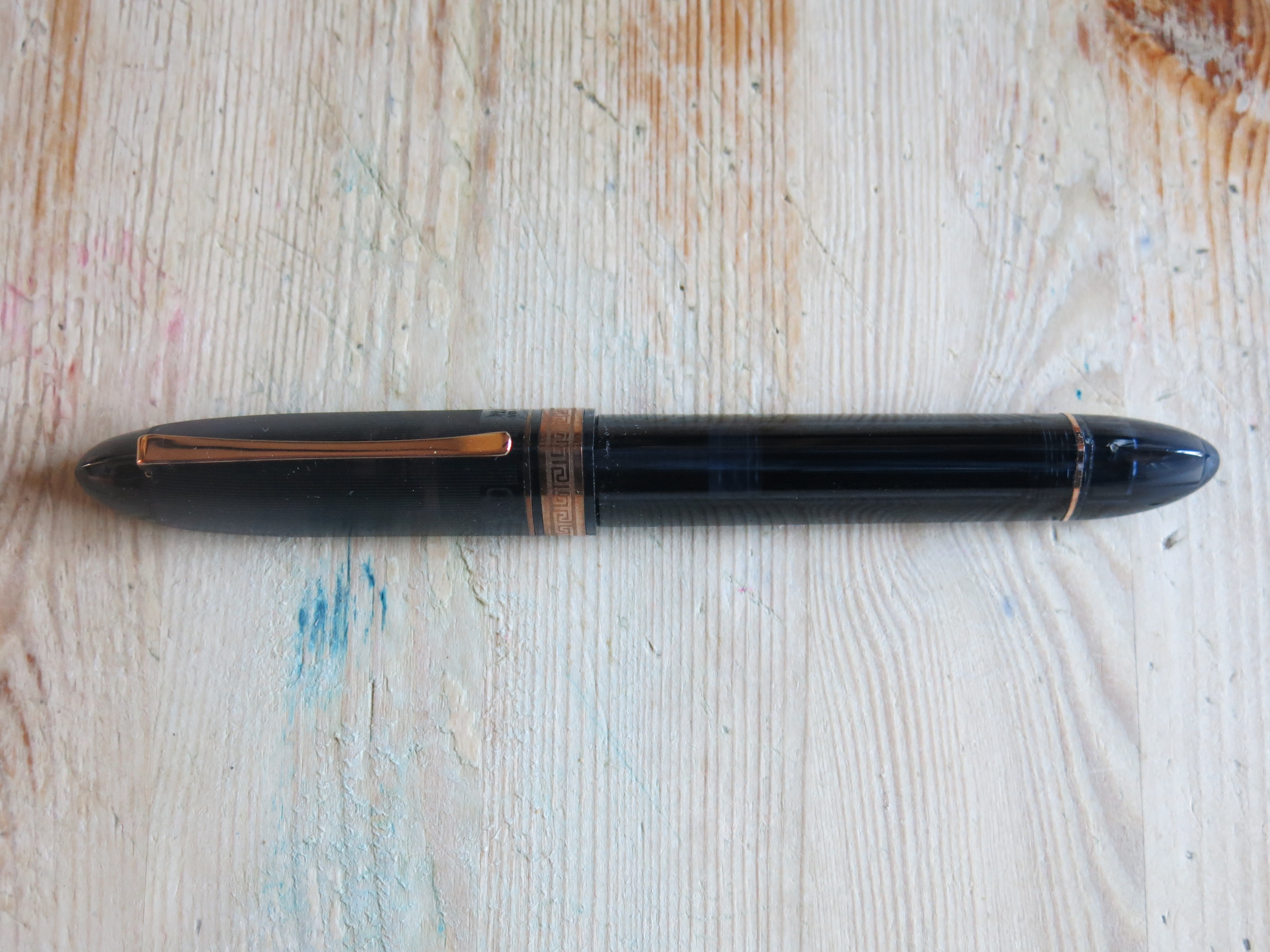 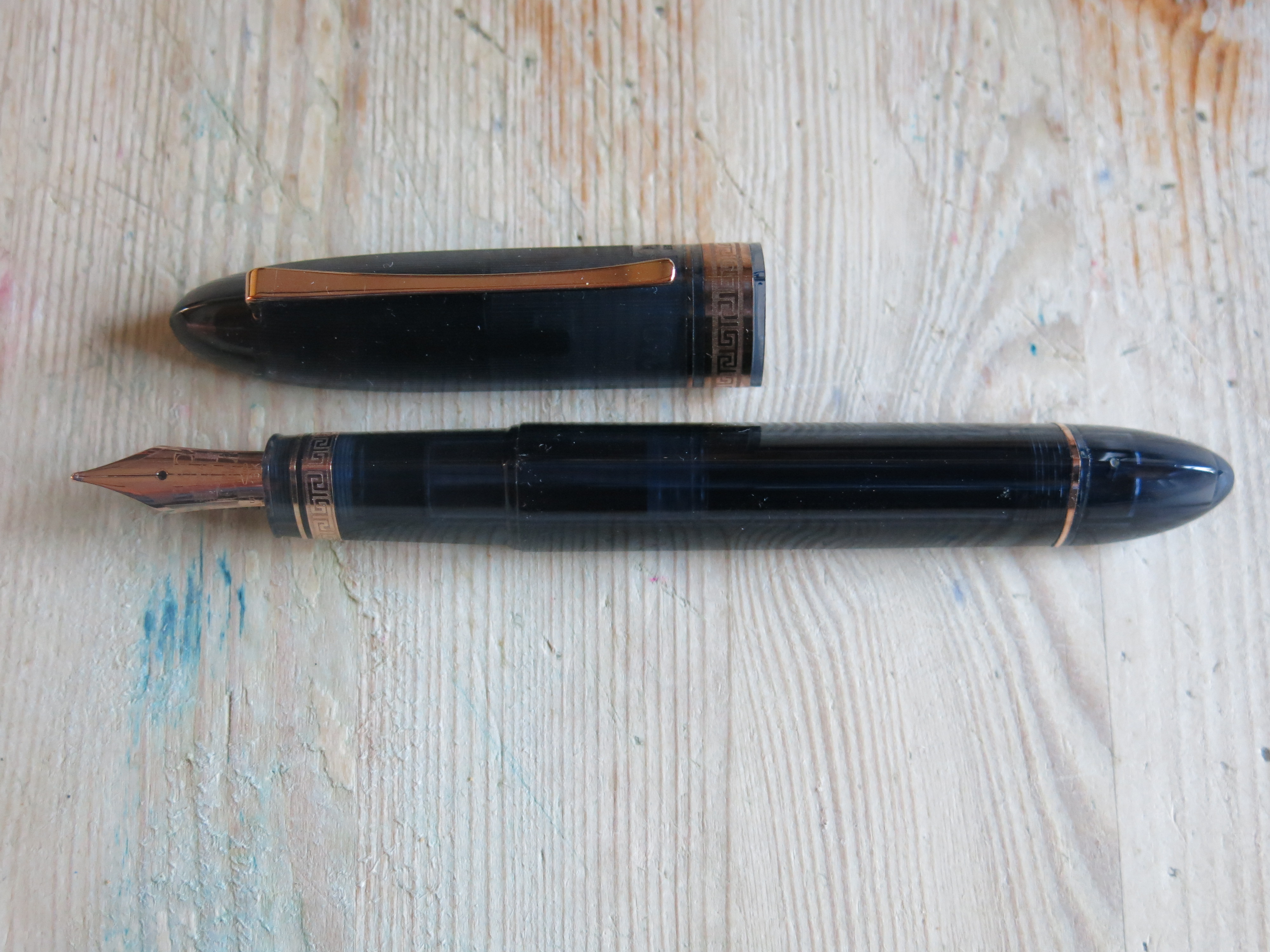 I got my first one, the dark blue pen with rose trims, from a well known OMAS reseller on eBay for what seemed about the right price, until it arrived and I found out it was a prototype.  Still the net result is it is now worth about what I paid for it.  It has worked very well for me and I did use it at work for a few months, but it’s wet broad nib laid down just too wide a line for my writing so it was retired.  There are only really a few areas where it’s prototype origins can be seen (aside from coming in the normal OMAS box, not the limited edition pen version with the bottle of ink (which coincidentally the eBay advert showed)).  First the nib is from a 10 year model 360 anniversary pen (as it has 1996-2006 on it), so presumably a suitable sized and shaped nib from the parts bin.  Next the clutches in the cap are not quite aligned correctly.  The cap does click close with no problems but one of them prevents the cap from being posted – never an issue for me, third, on the rear where the serial number should be it instead says 000/360 Proto, and finally, something I only noticed when I took these photos, the Greek key collar on the cap has a slight overlap at the front, where as on the actual release pen (i.e. my turquoise one) it is neat. 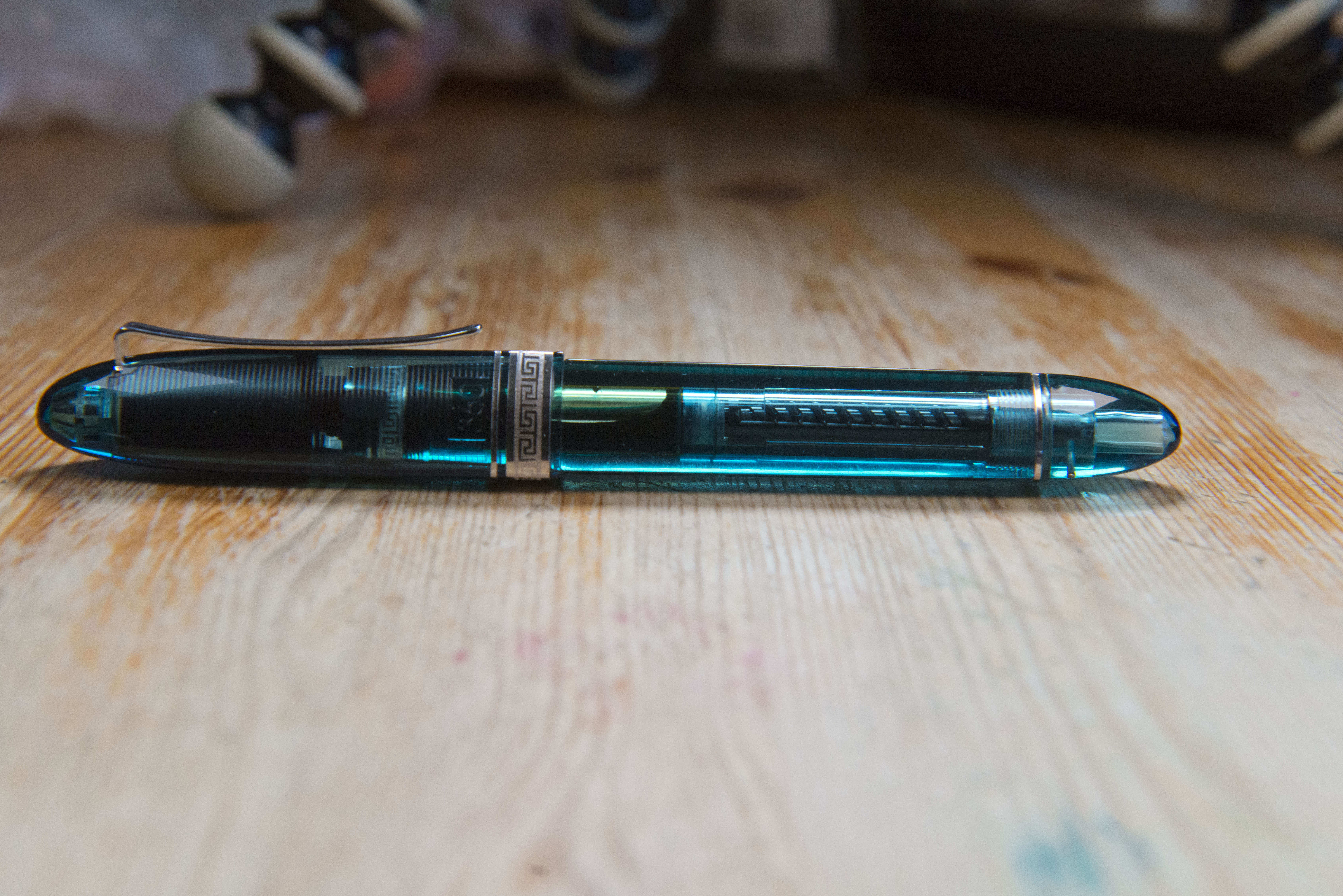 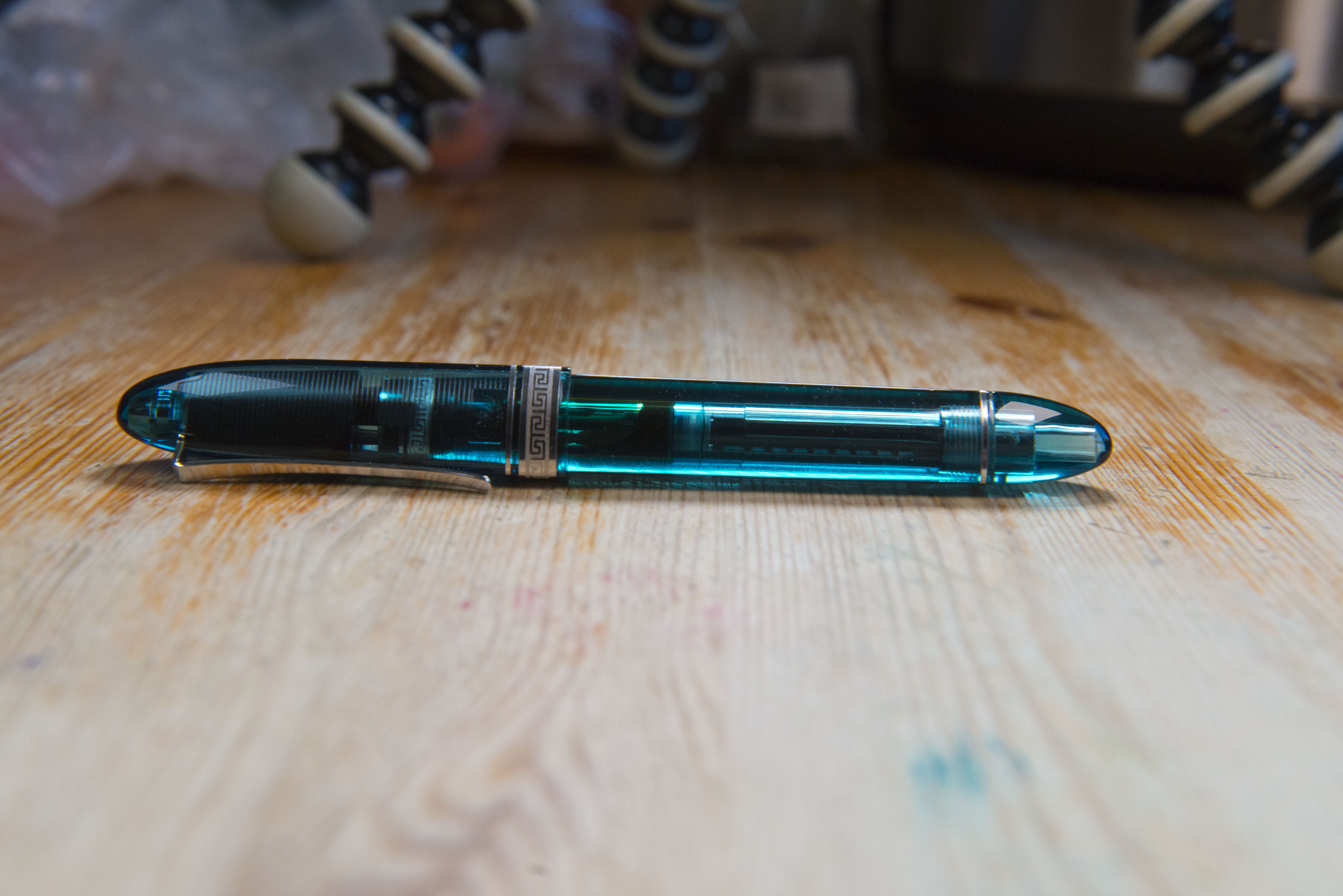 My second one, the turquoise pen, I bought recently second hand for what I consider a very good price.  The reason it was reduced considerably is because the previous owner managed to permanently stain the reservoir with a Diamine ink (can’t remember which one, he did tell me).  No end of attempts was able to shift it.  Net result he was not willing to even try selling it for the sort of prices a perfect turquoise goes for, all to my benefit.  The EF nib is wet and so writes more like a fine, and as with all OMAS 18k nibs, it is smooth, sweet, bouncy, and a joy to use.  The pen is now in my daily carry set for work and on it’s second ink fill.  Only catch is, due to present circumstances, my daily carry pens are sitting unused as I have others at my desk. 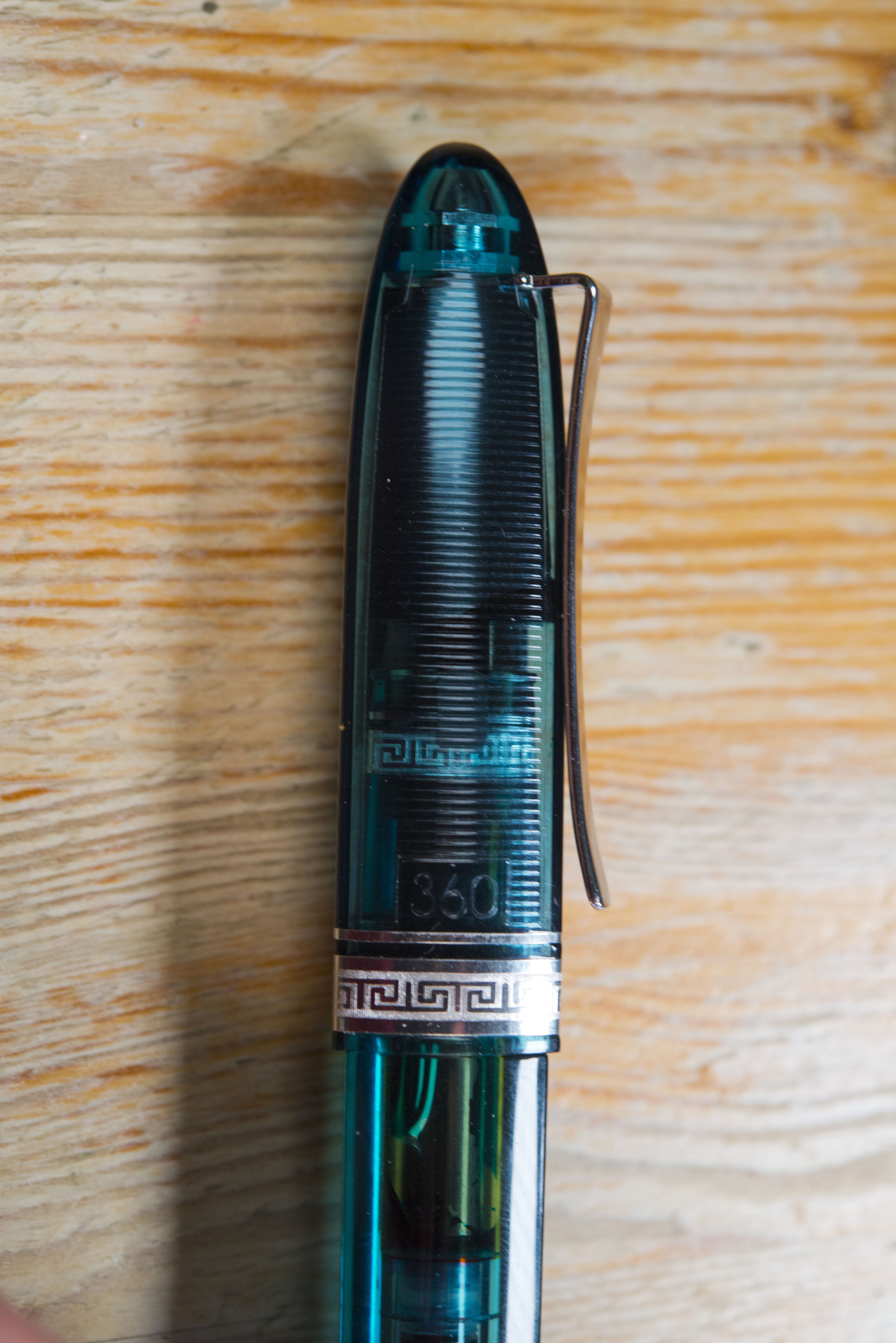 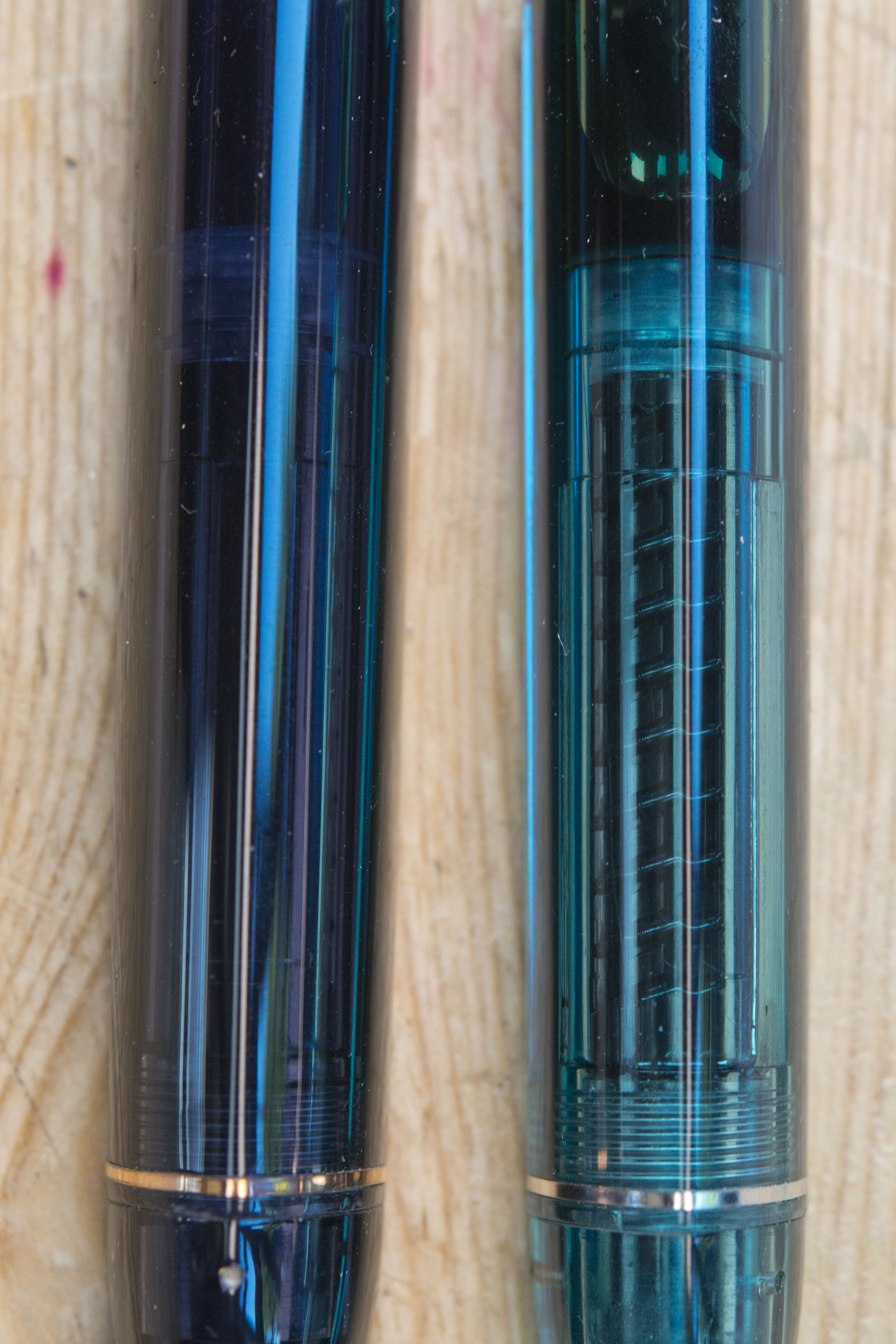 So where does the Vintage differ from the other models, aside from being limited edition demonstrators?  First area is on the cap.  Rather than being smooth, there are etched lines on it.  These provide a subtle patterning, though rumour (see the thread quoted above) is that the real reason is to give grip, making it easier to remove the cap.  Next there is the limited edition number on the back of the cap.  That’s about it.  Being clear it allows the OMAS piston system to be clearly seen, plus the ink level. 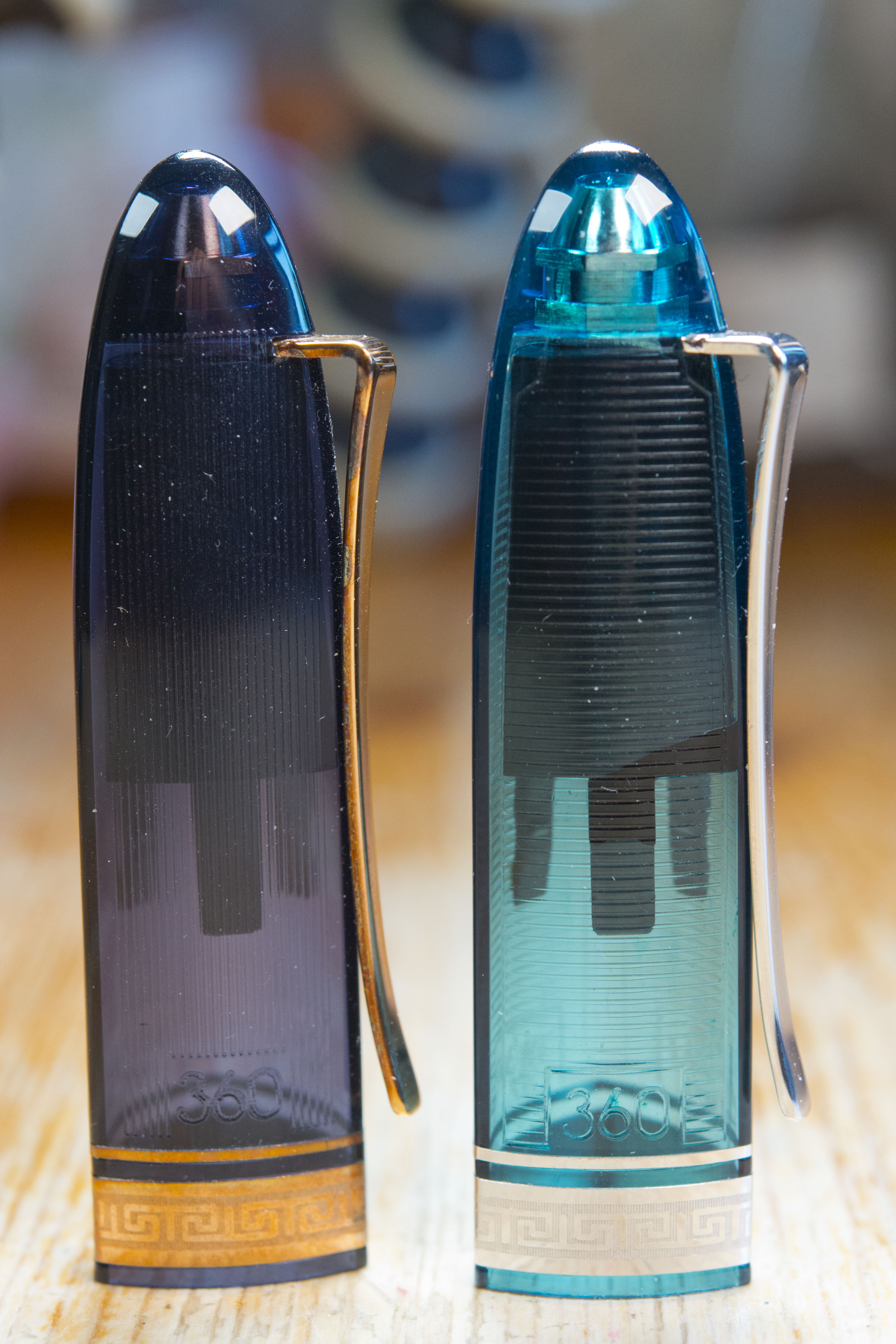 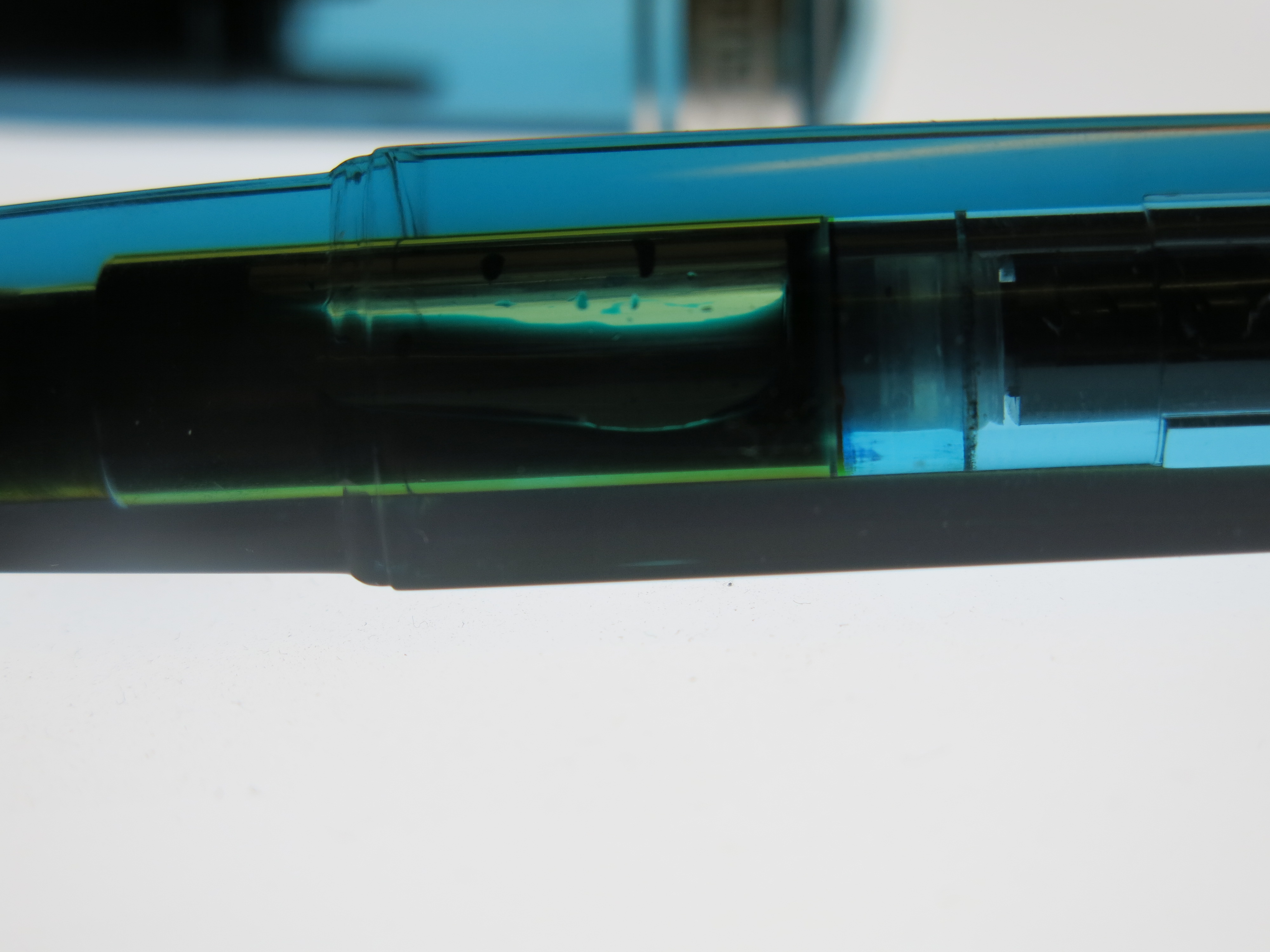 There is a downside to the material used.  Many of the OMAS demonstrator pens, not just the 360, were made from cotton resin.  It is strong, light, easy to colour, however it also stains if you’re not careful.  Not an issue with my dark blue pen as it was used regularly at the time so there was no risk of staining through evaporation.  Alas the previous owner of the turquoise pen did not realise and left an amber/brown ink in for too long.  As can be seen in the photos the staining is noticeable unless the reservoir is full.  For me this is not an issue.

Is a Vintage/demonstrator worth it over another model?  To be honest, unless you are really after a specific limited edition, probably not.  Yes there are the celluloids (such as arco) and the clear cotton resins, but at present the costs are high.  If you’re after a traditional 360 and not fussy, then look for the nib size you’re interested in and save some cash and go for a basic resin one.  As to models – based on the forums, avoid the mezzo.  Aside from being slightly smaller, it uses an OMAS cartridge system (the ACS tube), which was dropped after a number of years.  It will not take a converter and over time users found that winding in the new cartridge would actually result in the winding knob coming off instead.  There is also the Magnum, not sure if this was sold for that long and if there was much variation in finishes, however for those who like a larger pen, it is only slightly longer, but also wider.  There is then the ‘new’ version, of which I seem to be one of the few who actually like it – and I will cover mine in the near future.

Is the 360 worth it?  If you’re a left hander then probably not.  I’ll see how a few of my fellow bloggers who are left hookers cope (Rupert and Ant) when eventually we all next meet up.  If you have a more traditional right handed tripod type grip then I’d certainly recommend trying one.  I’m far from being alone in thinking it is one of the most comfortable fountain pens out there, hence why my newly acquired turquoise one is now in my daily carry set and my main work horse pen in that regards.  Only catch is the costs are still silly unless you can get lucky, as I did.  Also, usual caveats about trying one before buying – especially with it’s shape.

So are there any downsides to the pen?  The cotton resin demonstrators can stain, nibs should never be removed as the ebonite collar is known to become brittle and spares are non existent, also the caps do not seal that well.  Leave a freshly filled 360 for a few weeks without using it and expect to see most the ink gone – which is probably the cause of the staining. 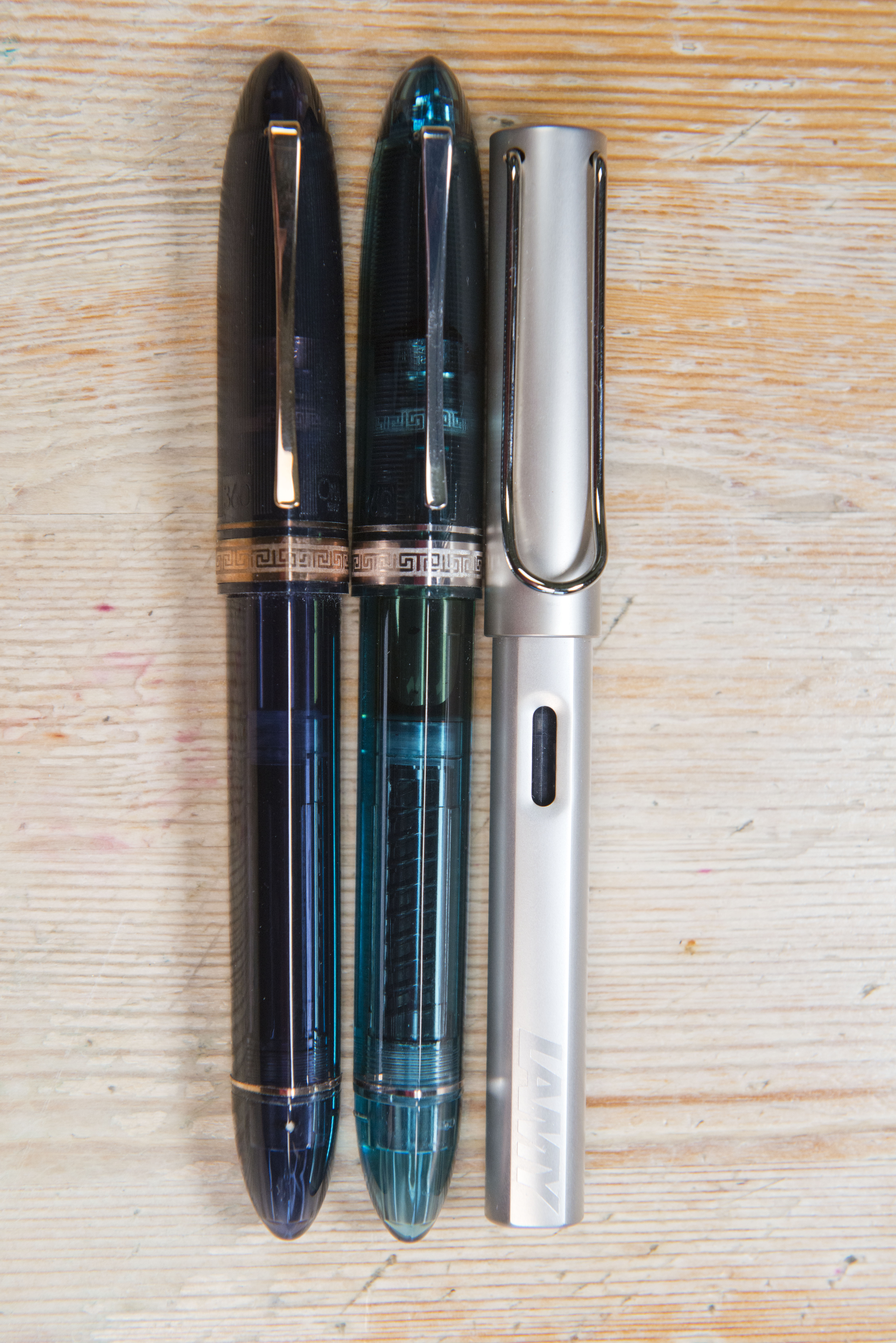 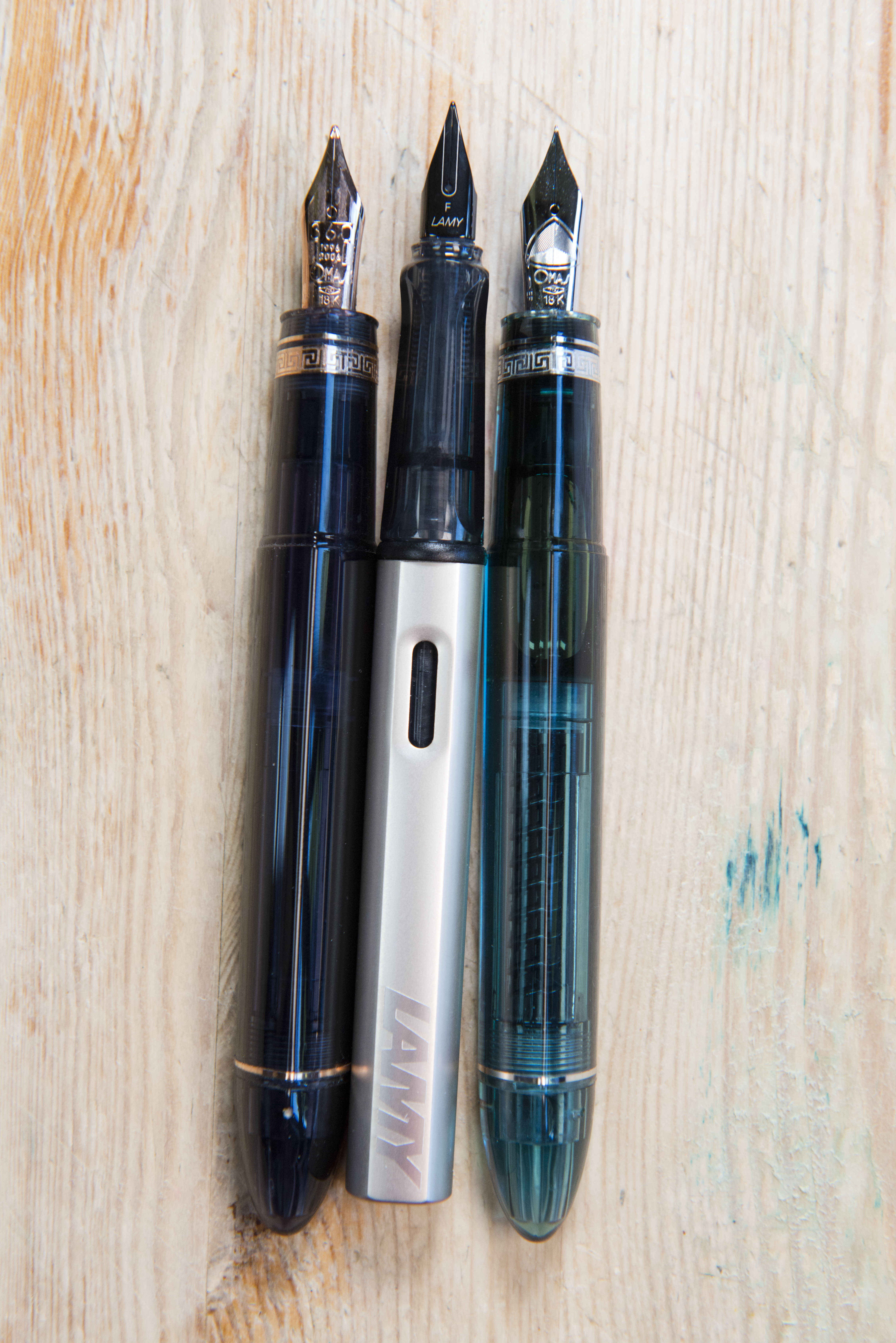 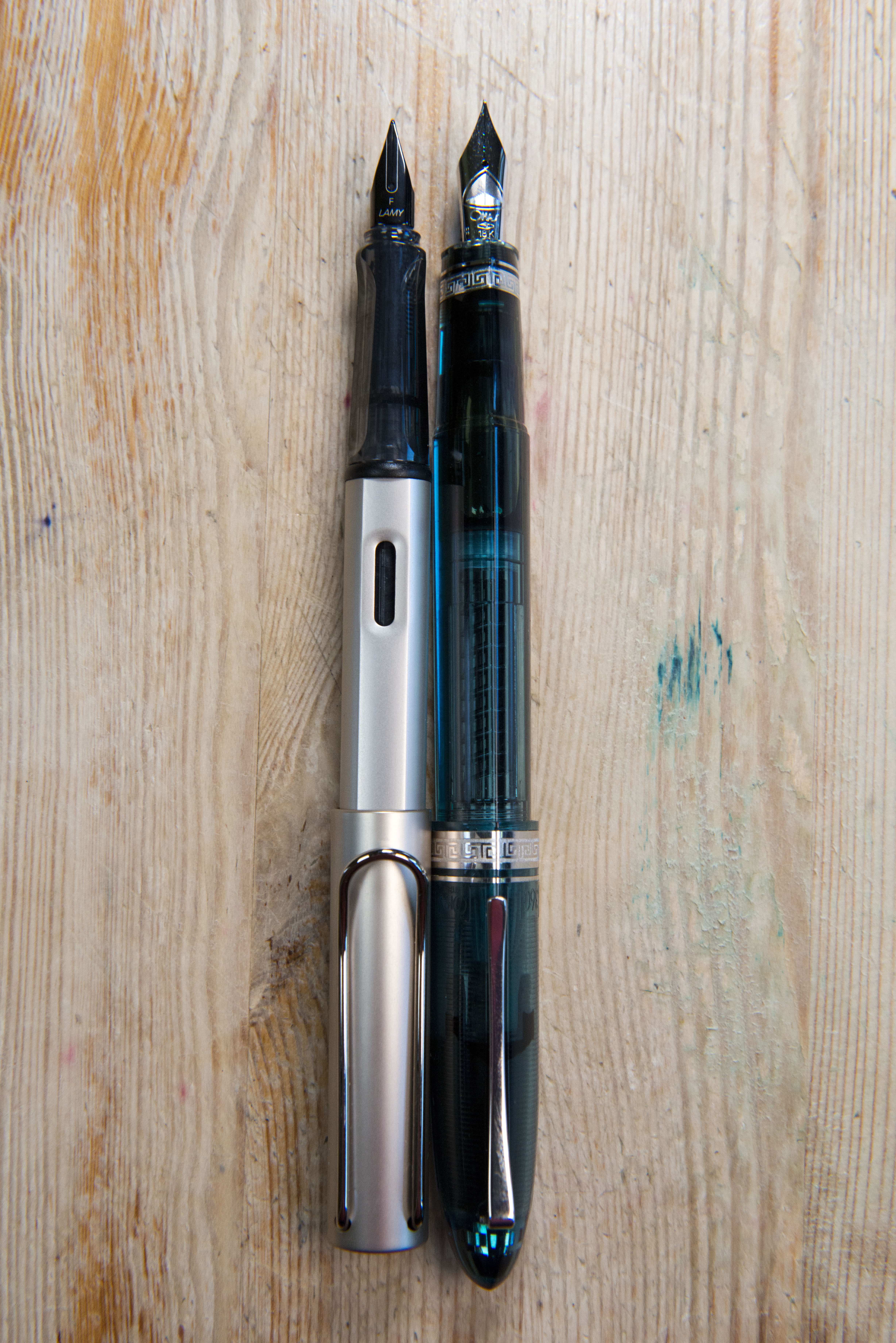 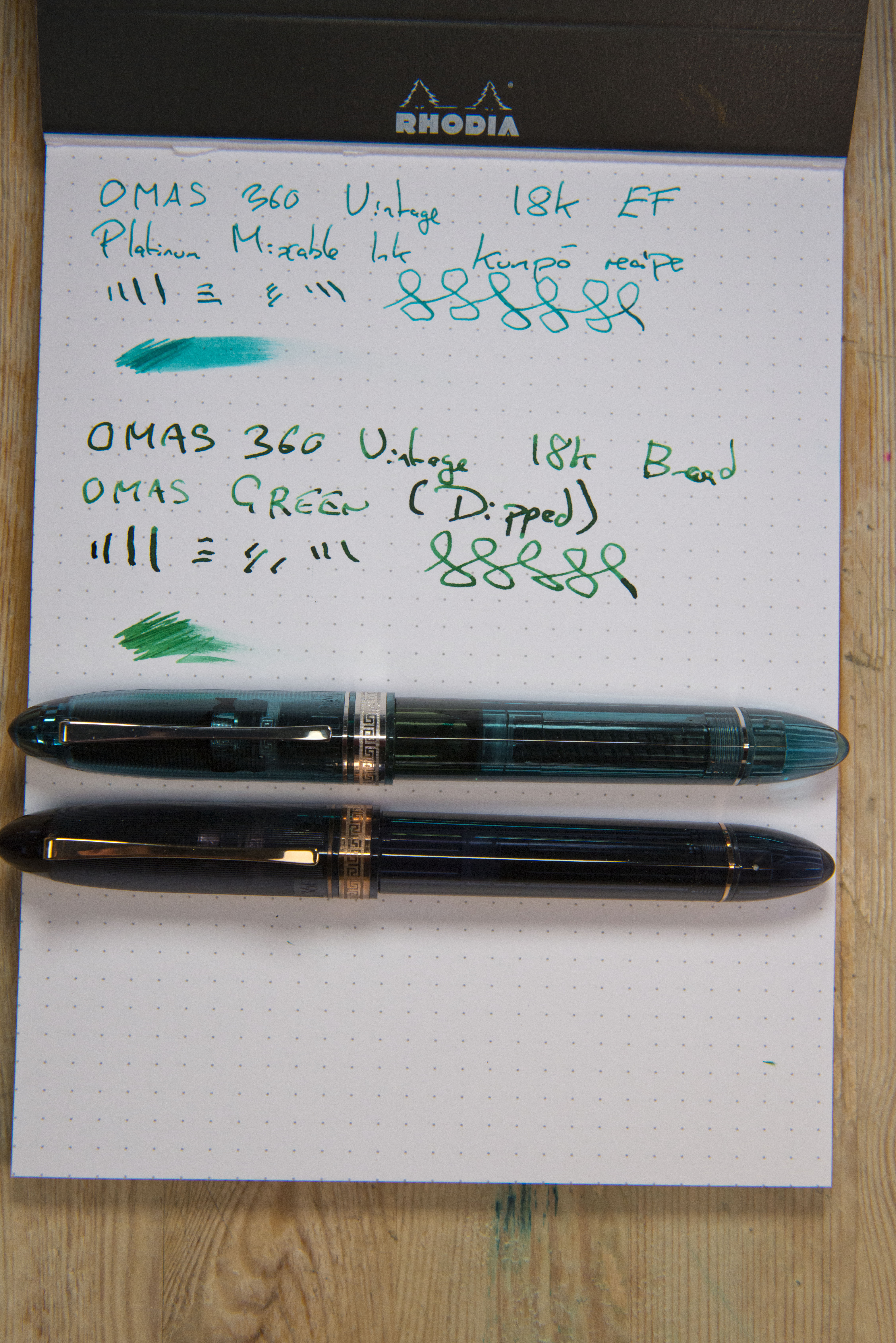