There are few things more dangerous to a collector than going to a show or viewing a for sale list.  To cut a long story short, buying one long sought after pen resulted in another three, including this Stipula Etruria Faceted Alter Ego.  All based on a couple of photos and a very good price.  I will detail the story at the end for those interested, but the net result was the arrival of this limited edition pen with a celluloid body and sterling silver fittings.

While Stipula may have been founded in Florence in 1973, it was not until the early 1980s that they started to make pens for others, and it was only at the start of the 90s that the Stipula started producing under their own name.  The Alter Ego celluloid appears to have come in to use around 2013/4 with the Faceted Etruria model going on sale not long after.  Just 18 were made with a mixture of titanium and 14k gold nibs.  One of them, with the titanium nib, seemed to do the rounds of the US pen reviewers.  This is number #2 and has a fine gold nib. 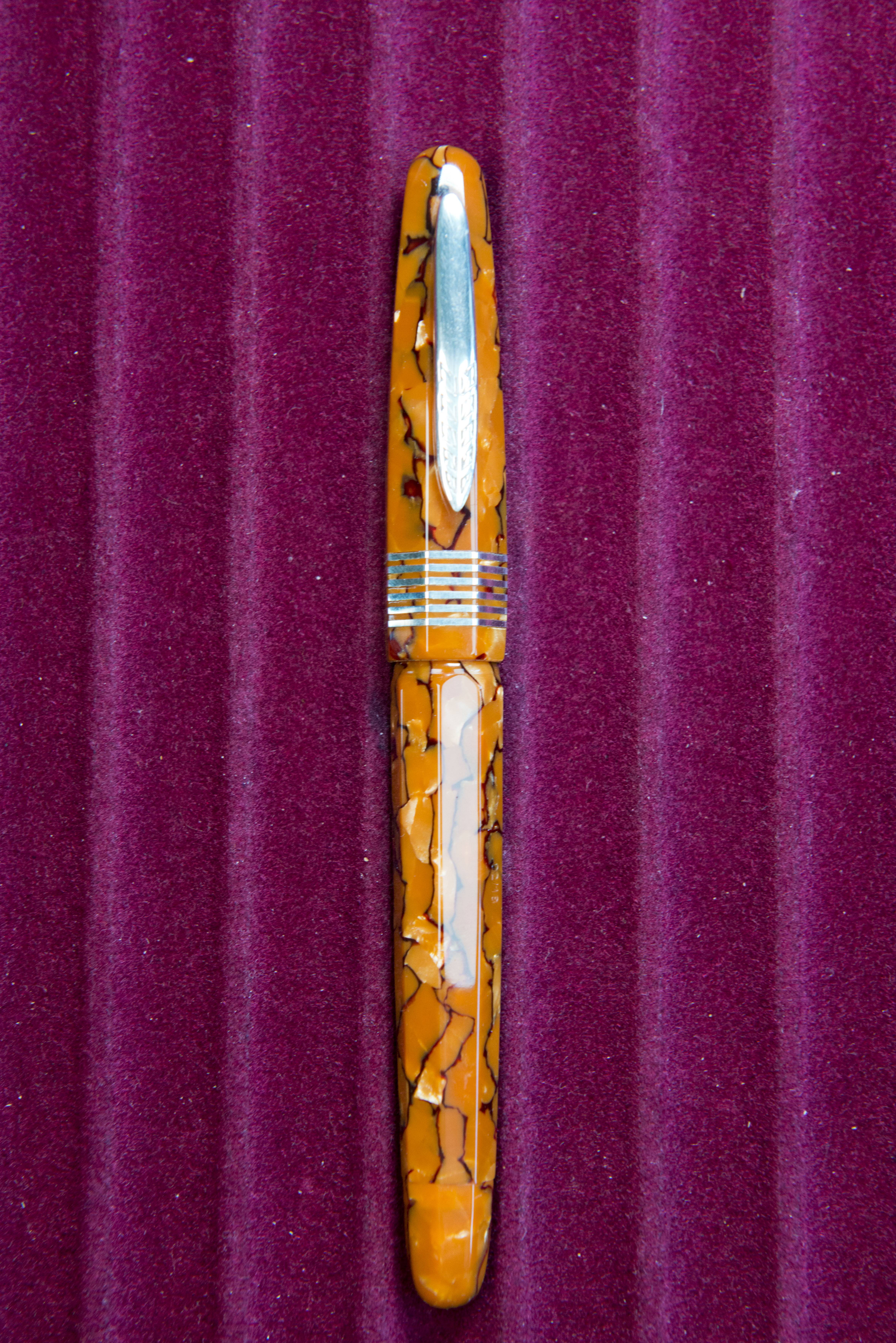 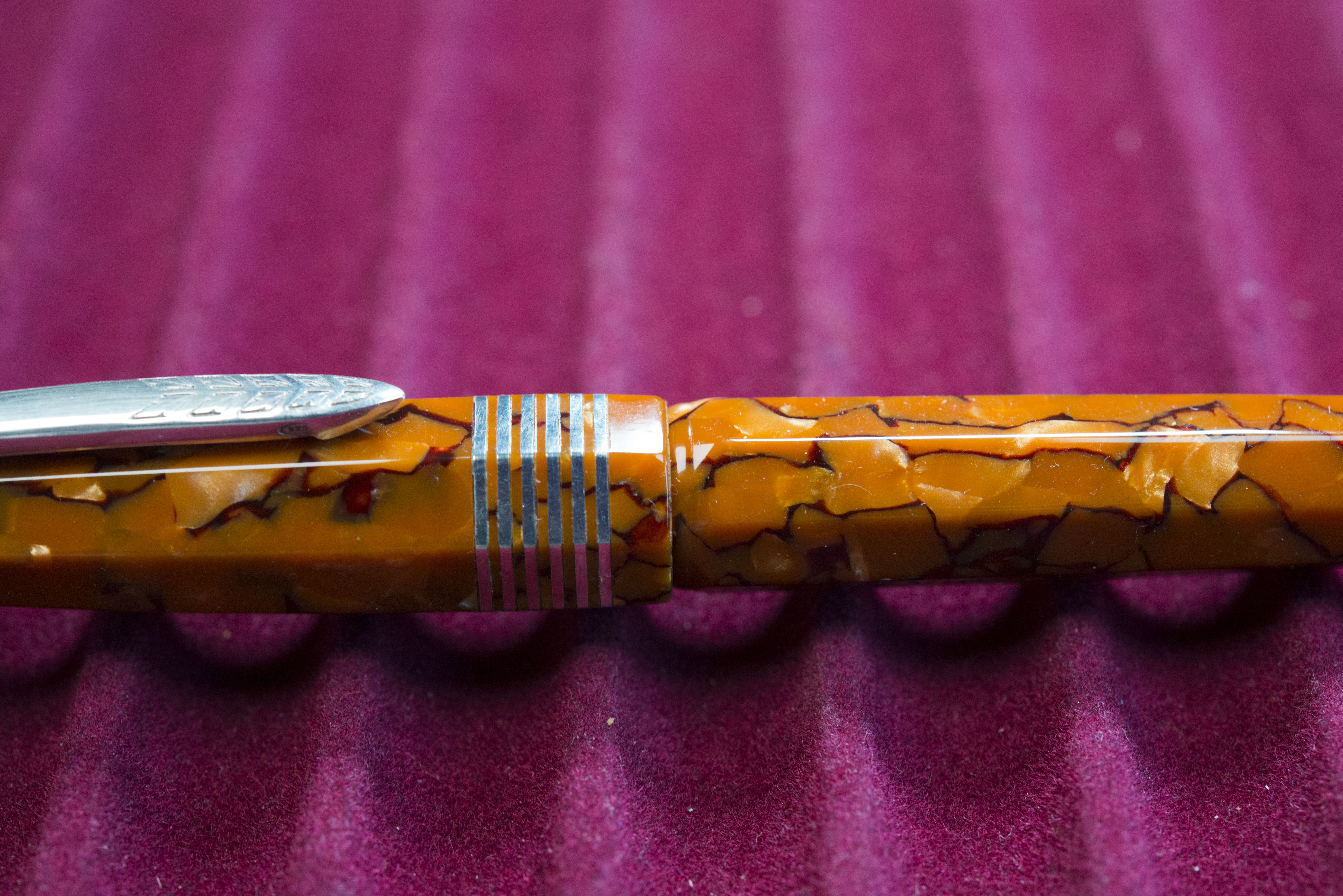 The celluloid is toffee brown in colour (to me anyhow) with a cracked ice effect.  There is quite a deep pearlessense or chatoyance in some of the lighter ‘chips’, which creates a glittering type effect when then pen is rotated.  The facets create eight sides on all bar the grip area, which is round from the nib all the way back to beyond where there is an obvious change in component pieces. 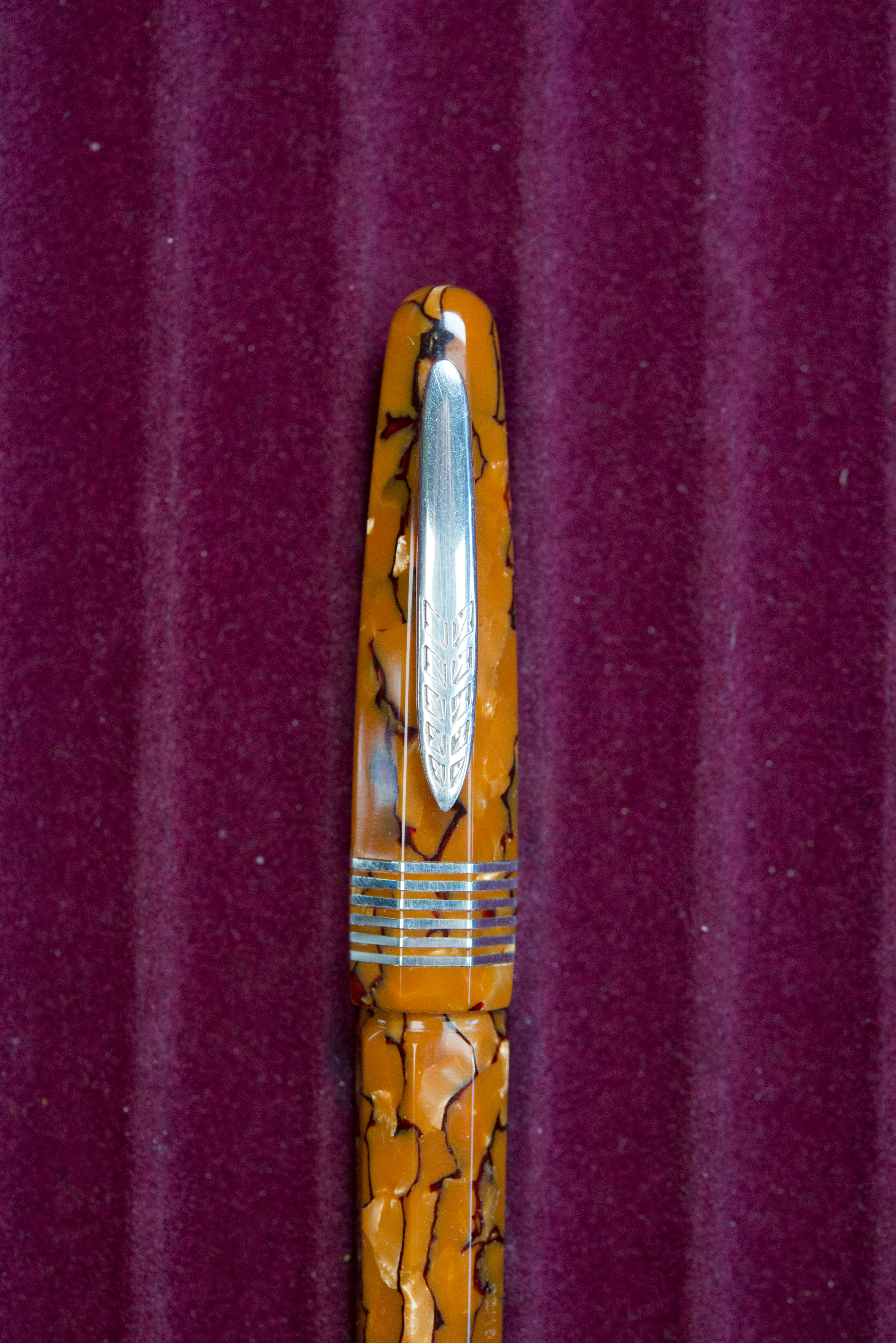 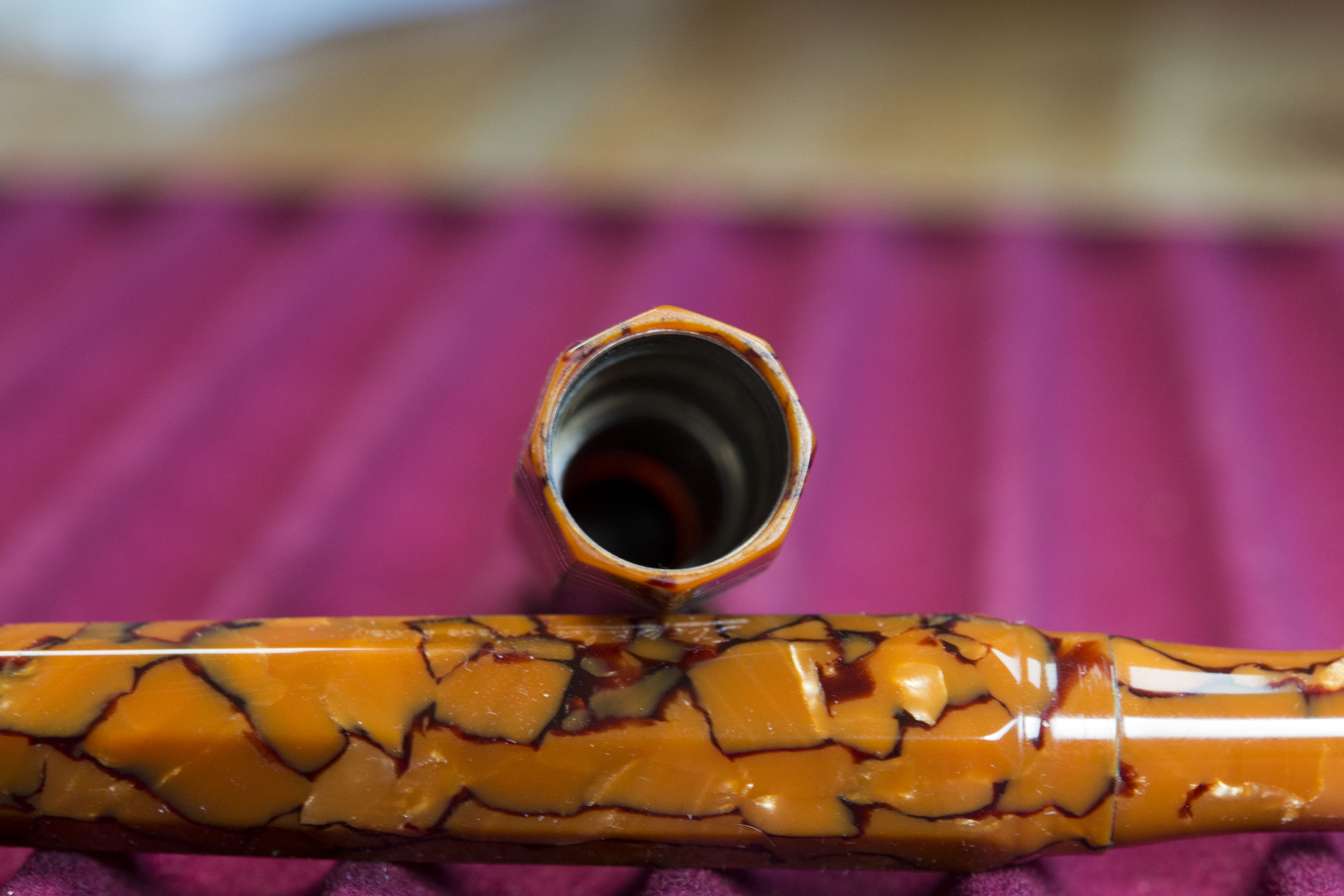 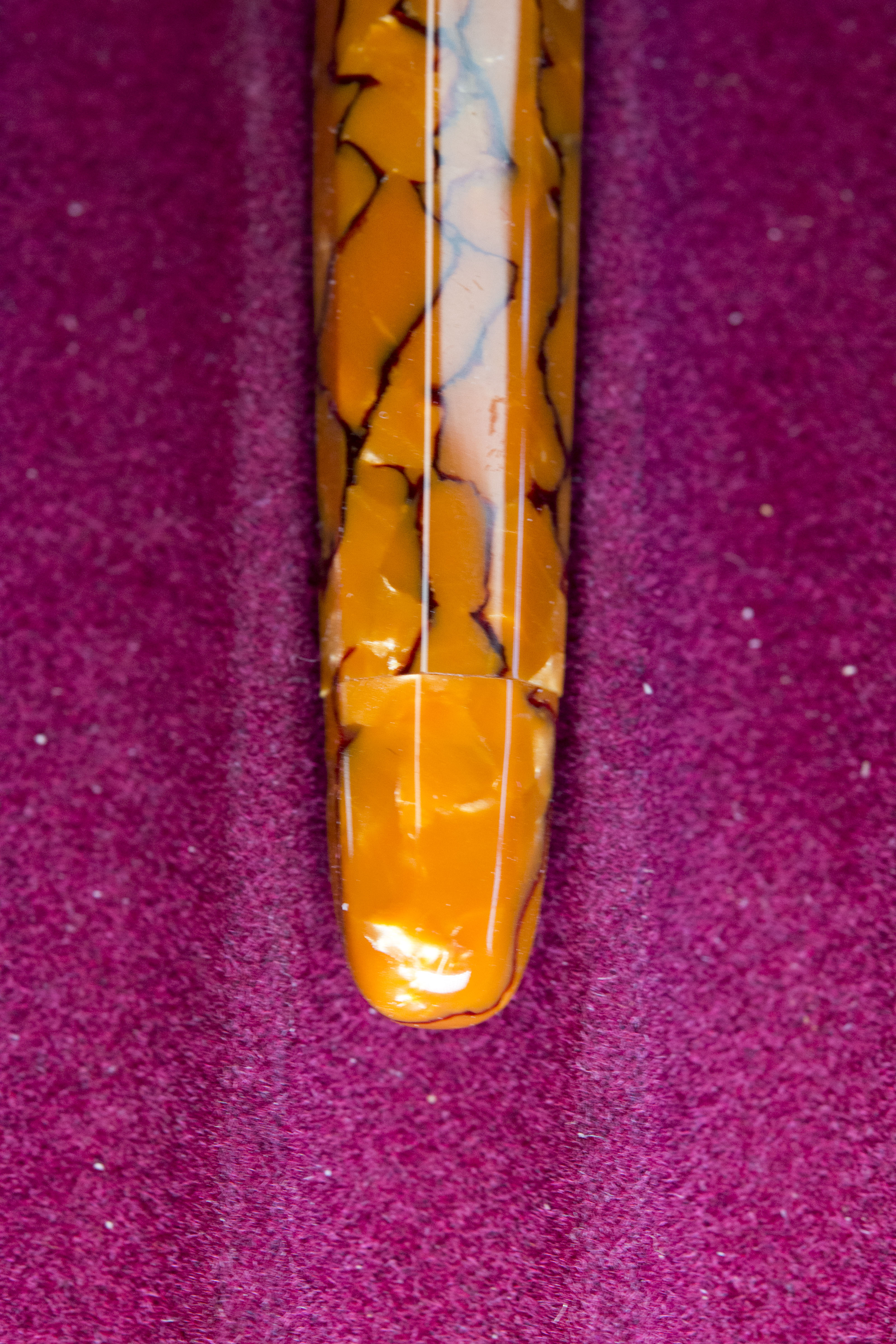 The pen is surprisingly heavy with the cap weighing around 17 grams and the body 25.  With the former it is not just the sterling silver clip and six octagonal rings, but rather inside you can see a metal lining.  With the body I assume the piston it metal lined and has all metal components.  It is hard to tell as the piston knob rotates in place, unlike on it’s rivals, so you can not see the rod when fully wound in.  Incidentally the winding action is the reverse to other pens as with Stipulas you rotate clockwise to empty and anti-clockwise to fill the pen.  It is quite a stiff action, which also does not help with the confusion, though this may be part down to the design, which is meant to self clean on winding the piston in. 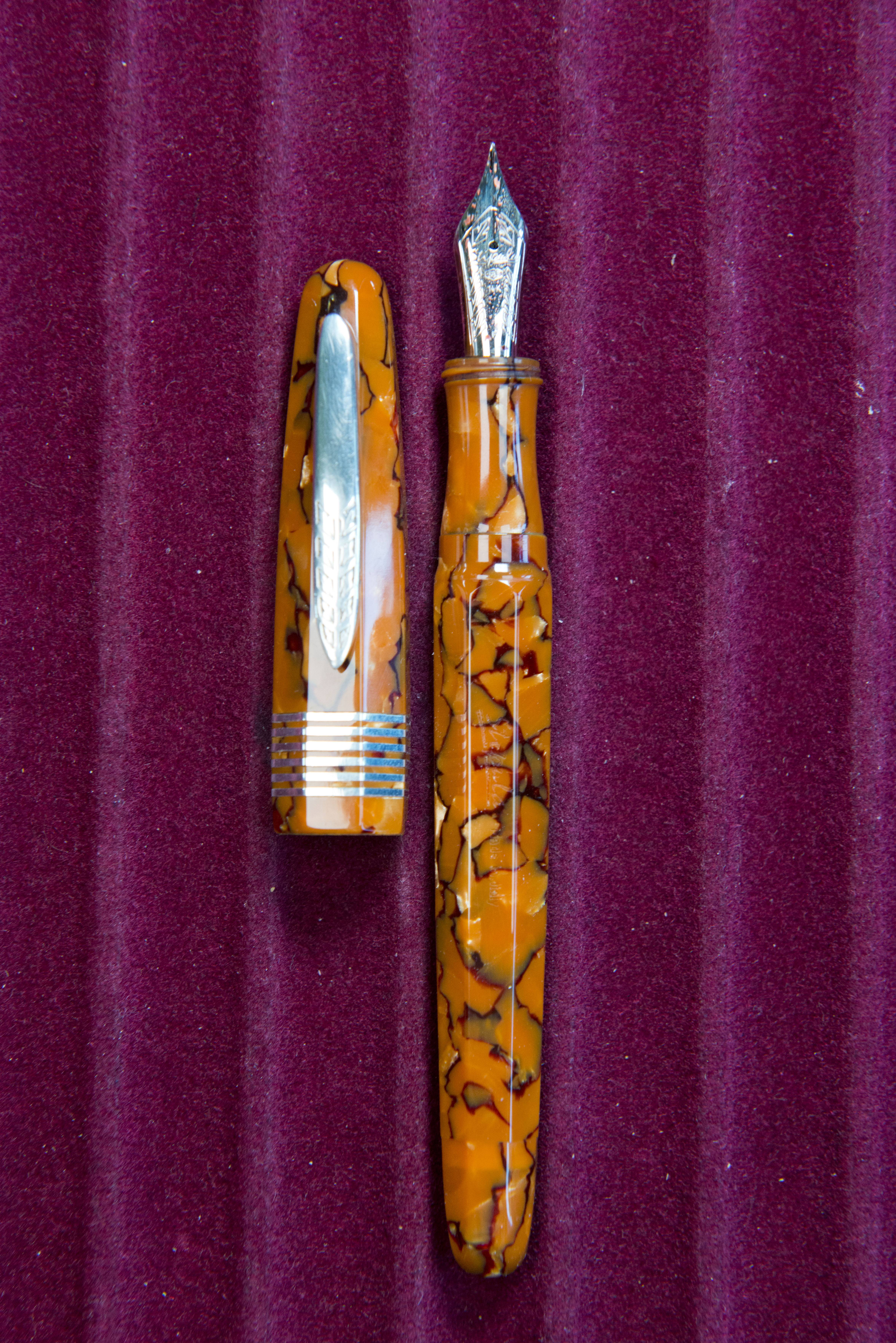 The grip ends in the cap threads, which have a slight lip just before them, with the result they are kept away from fingers.  There is a slight edge between the material for the section and the body, which is both surprising and a little disappointing as the octagonal facets do not start till slightly further back.   There is no reason aside from poor design/workmanship for this not be a smooth transition.  Having said that you can not feel the edge when holding the pen and all other transitions are smooth until you get to the piston knob, where there is a very slight difference in widths which, while not noticeable by eye, can be felt with lightly moving a finger along the end of the pen. 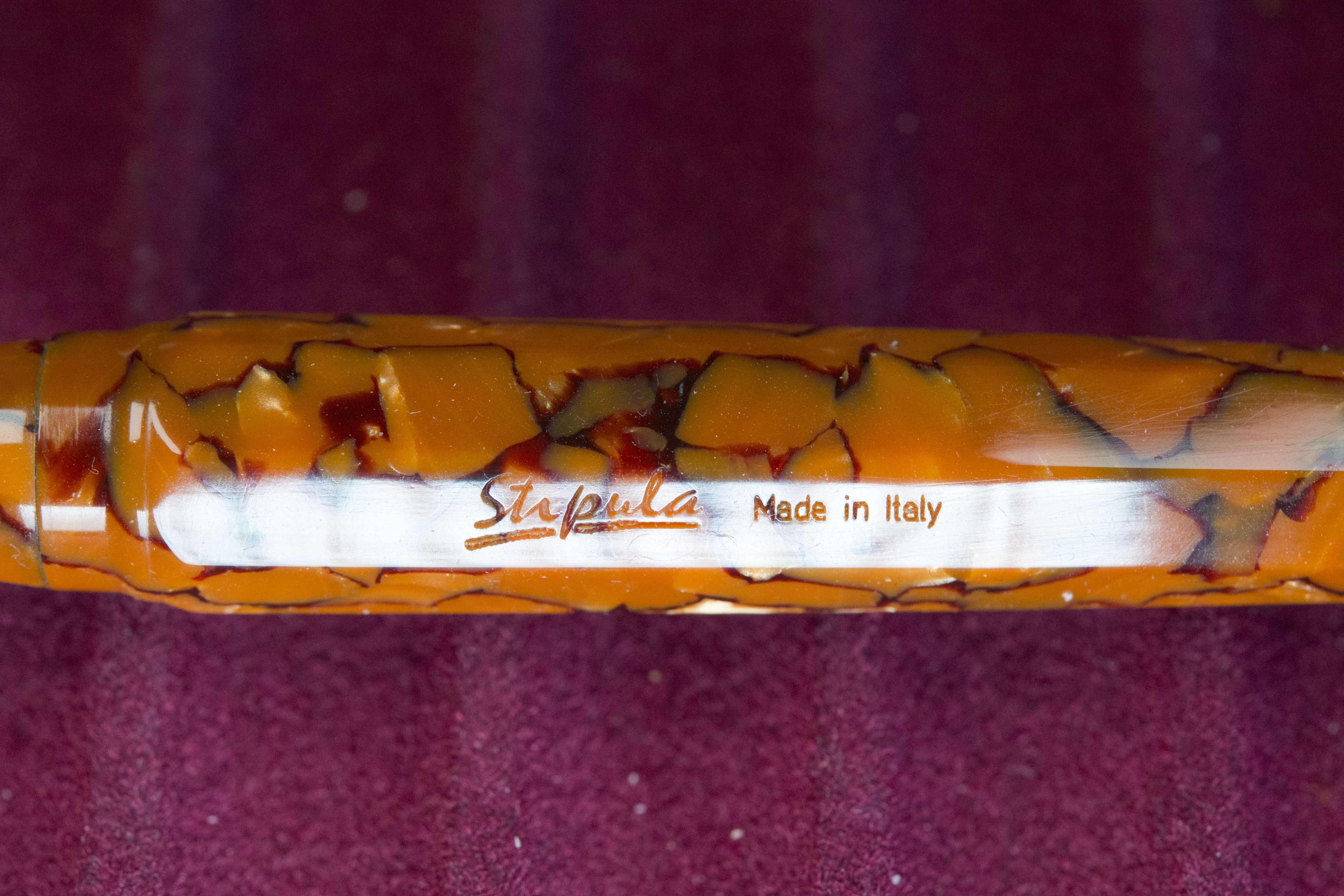 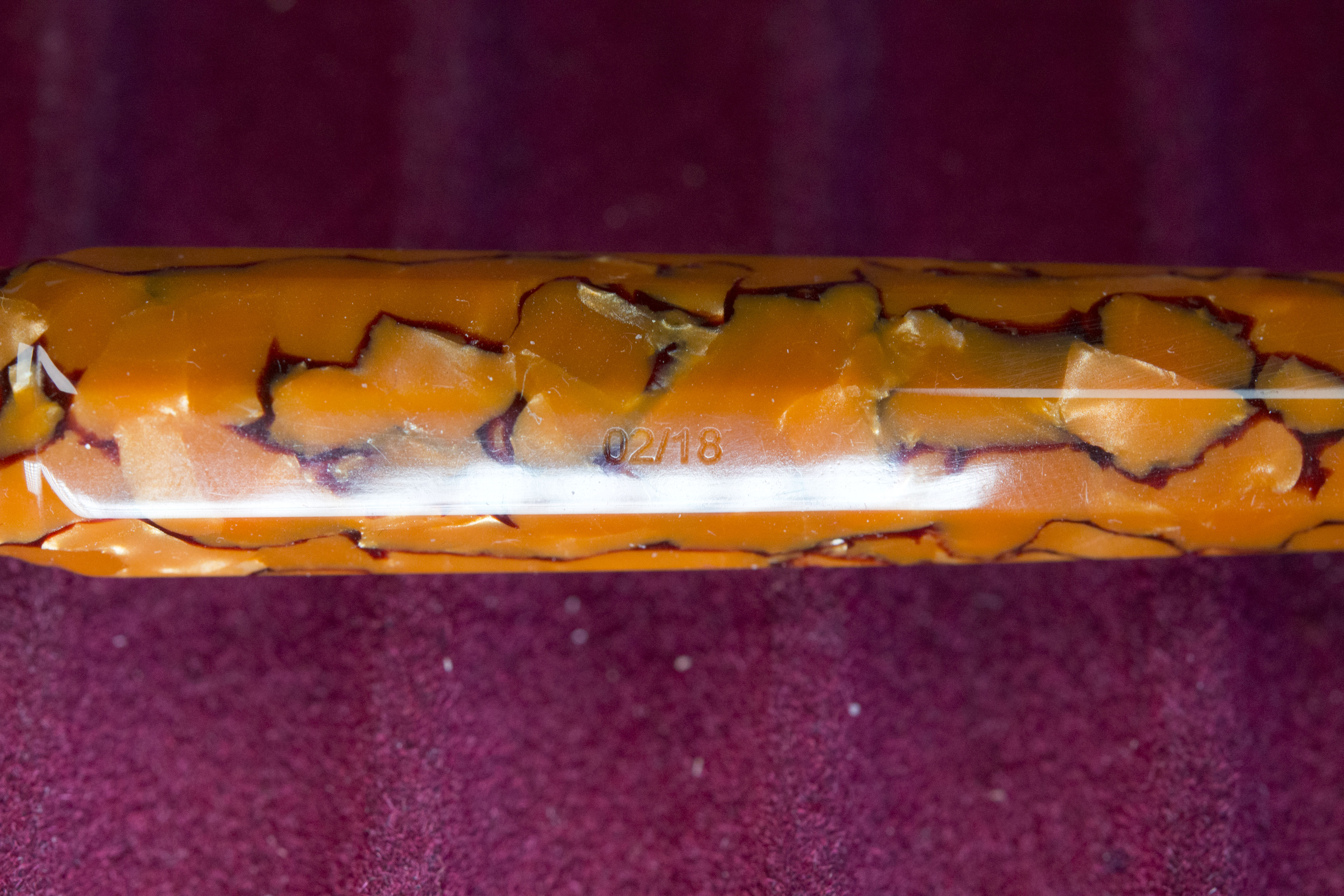 On one side of the body ‘Stipula Made in Italy’ is stamped in to the celluloid and on the opposite side the number, which on this pen is 02/18.  Another disappointment is that these can not be lined up with the clip when the cap is on.  From experimentation I would have to say there is just a single thread on the cap as the number always ends up on the first facet clockwise no matter where it is when I start the closure process.  Being single threaded it should be really easy to get the stamps to be in the correct position.  This and the previously mentioned fitting are not the only QC issues either as the clip is not straight and the faceted nature of the pen makes this more obvious to the eye. 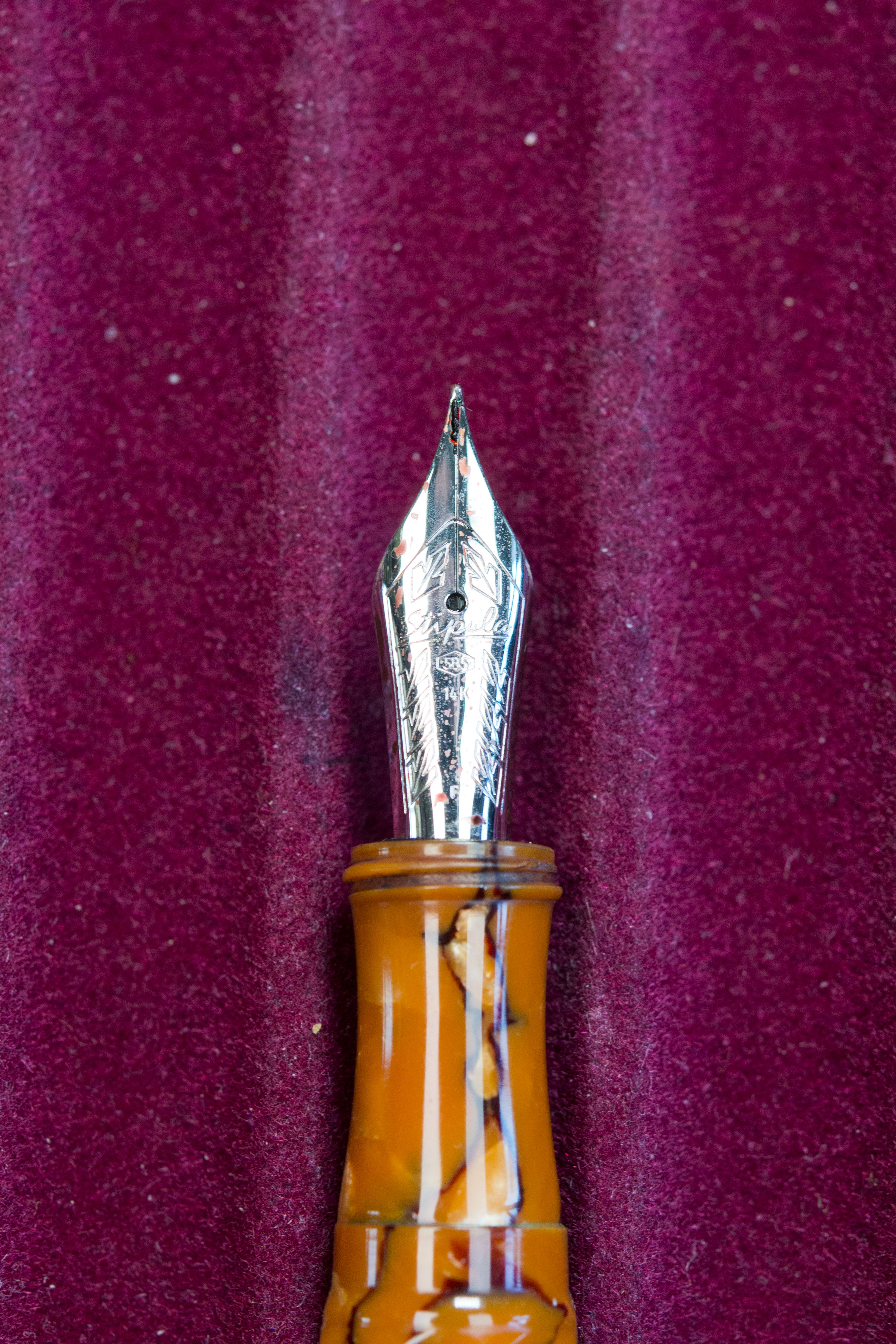 The nib is a size #6 with attractive patterning, the Stipula name, 14k and F markings.  Normally for me I would consider it to be too stiff for my personal tastes, however I have found it to be delightful to use.  It is smooth and glides across the paper while laying down a nice line, which is towards the wet side.  Some line variation can be obtained, but not much and I would not like to push it too far.  Certainly it’s a very different nib to those found on OMAS/ScriBo pens, though I would say it is less pencil like than with a Delta. 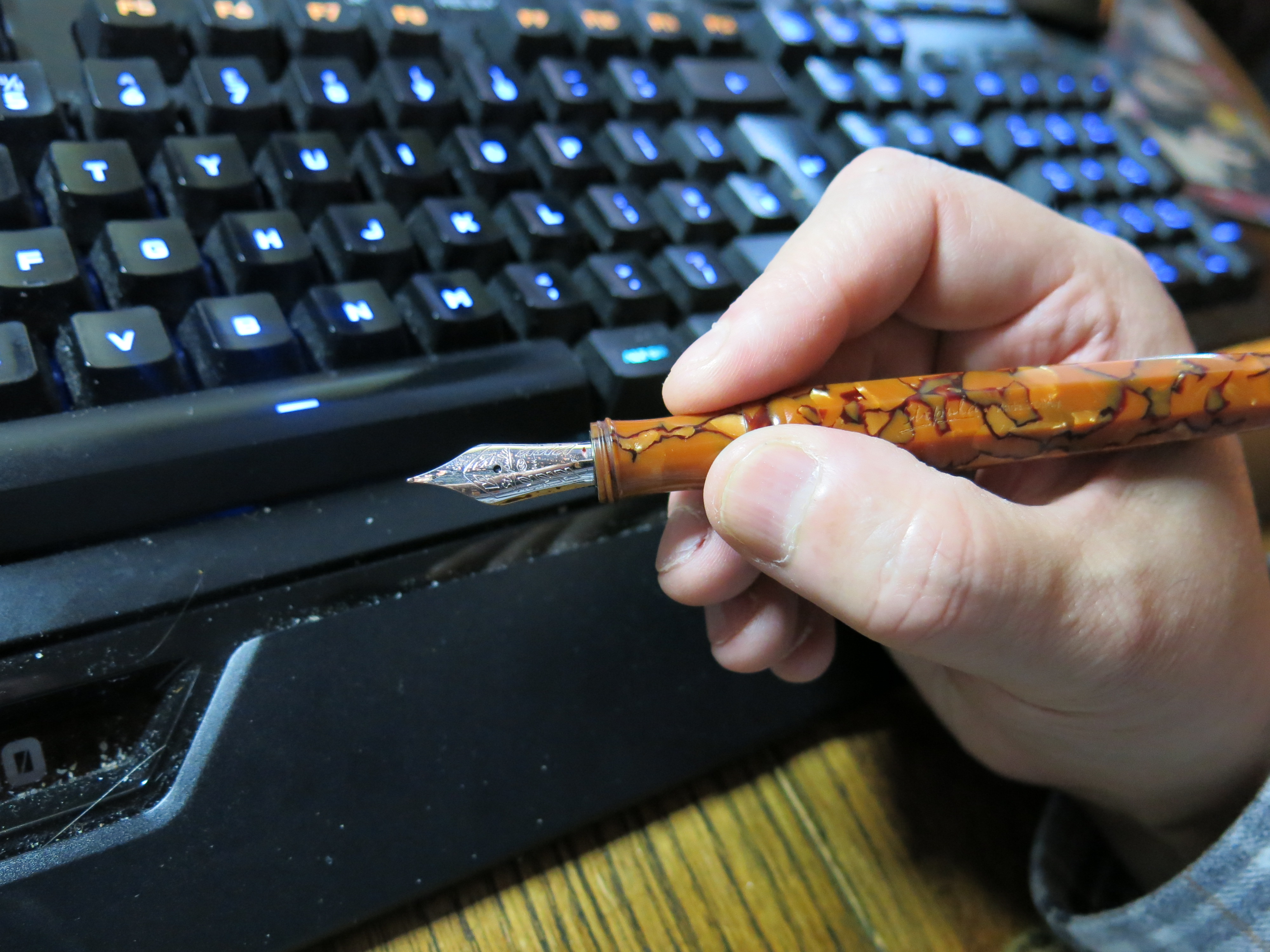 In the hand it is a comfortable pen with plenty of options for where to hold it, which is fortunate for me as I found the curved part of the section too short for me, resulting in a pinched in grip.  It is worth noting this is the same problem I have with Pelikan pens including the M100x.  For me I found a very comfortable position holding it slightly further back.  The weight makes the pen comfortable in the hand.  The cap can be posted, but I found this back weighs the pen a bit too much, though not as badly as you might first expect. 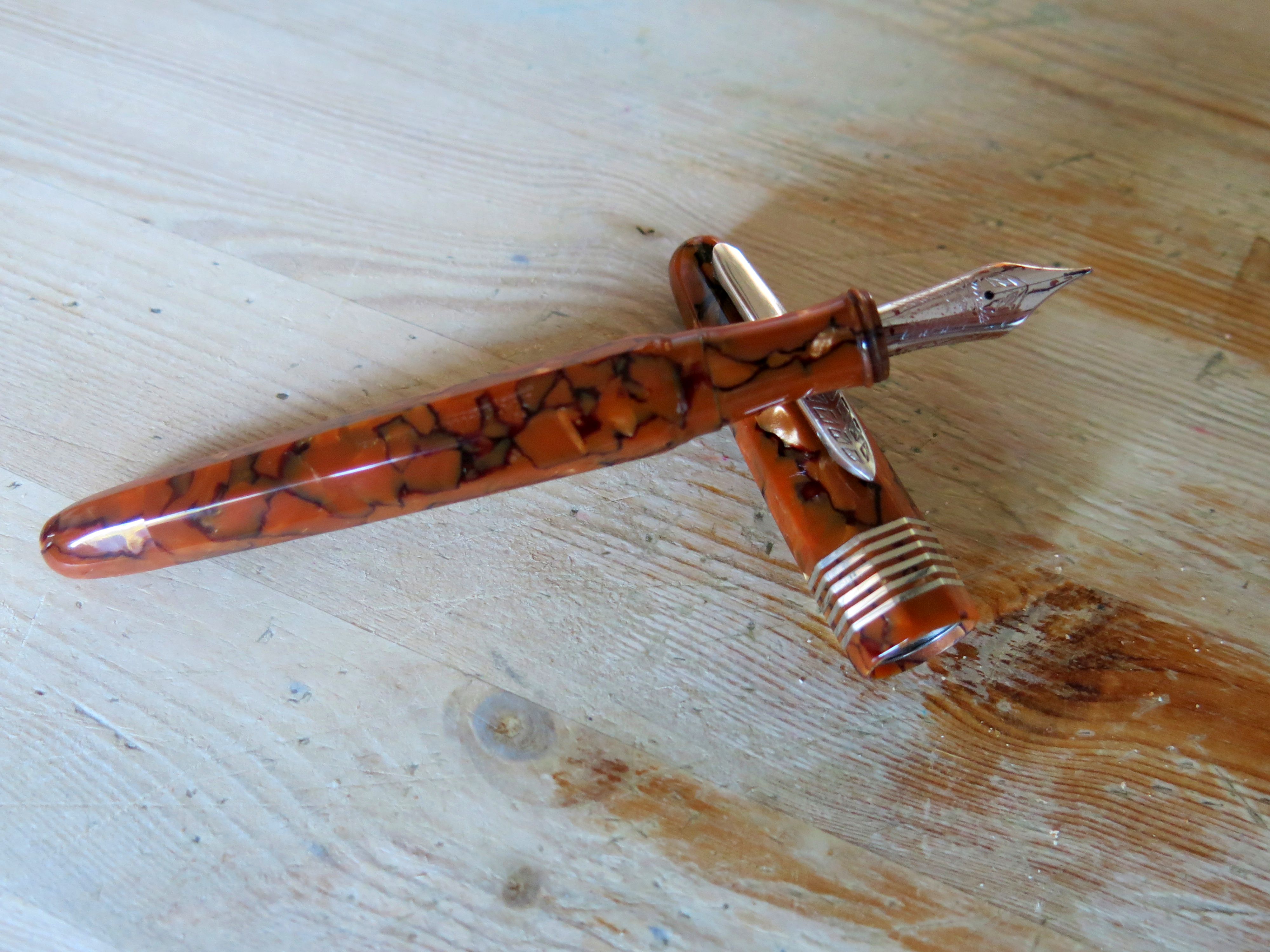 So am I glad I bought it, would I be glad if I had bought it new.  Originally this was a $700 pen, though I’ve seen prices for the last of them sold at $500 and $400 (I think that one may have been second hand on behalf of the original owner).  At full price, the imperfections will have annoyed me and I would have been disappointed.  At the reduced prices, maybe, maybe not as I would have know of the big reduction.  For what I paid for it, certainly yes.  I really enjoy this pen, both from the visual perspective and also as a writing implement. 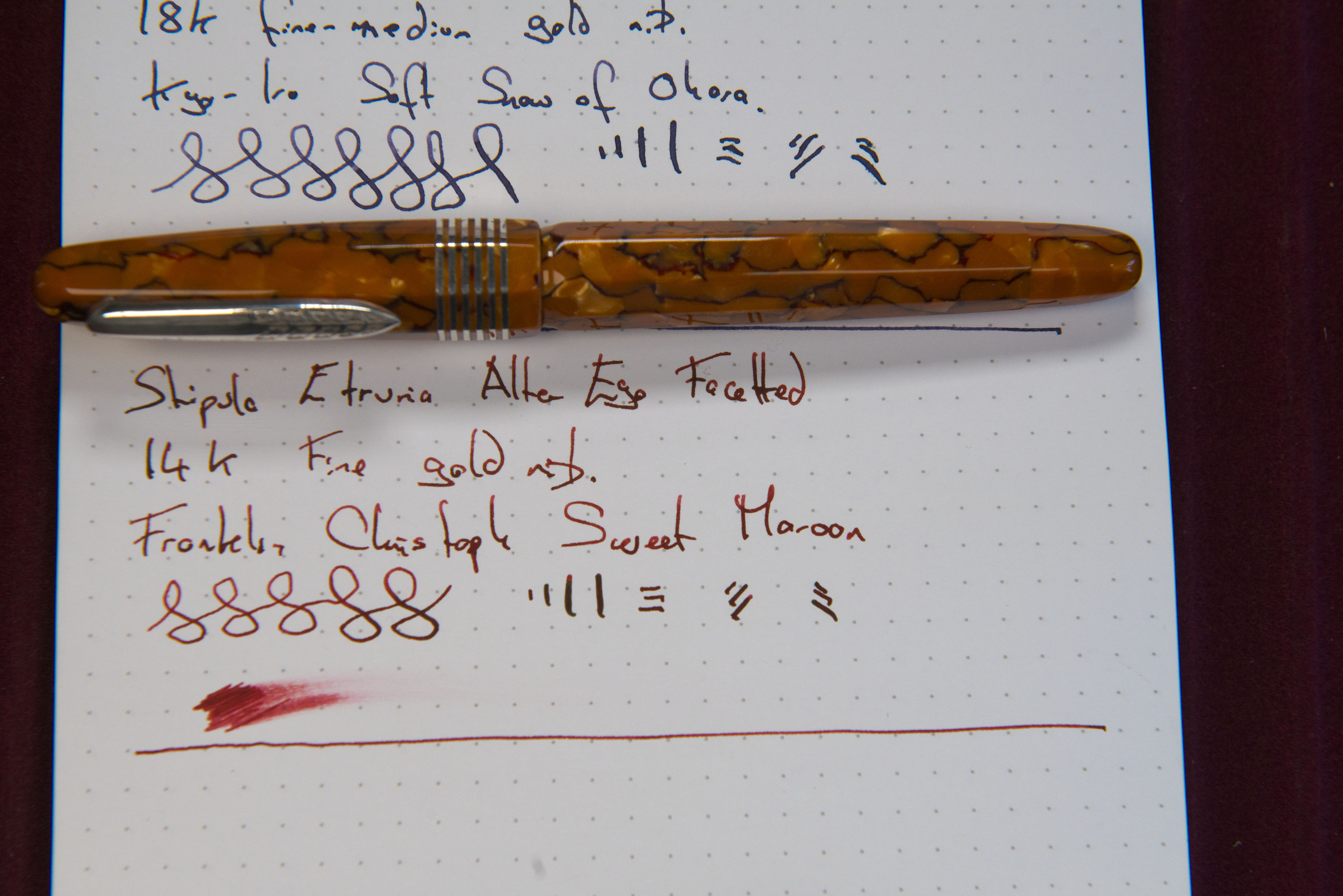 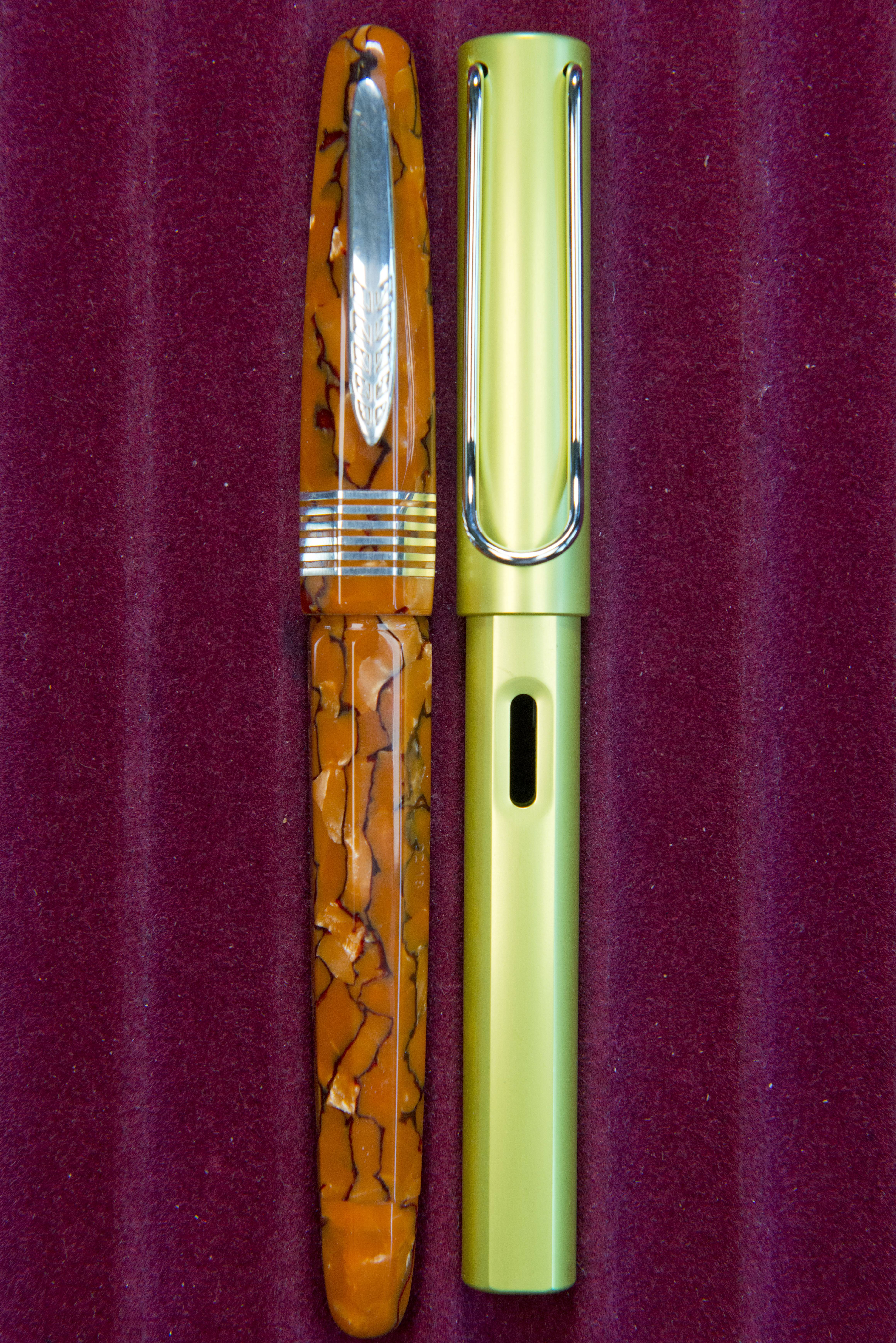 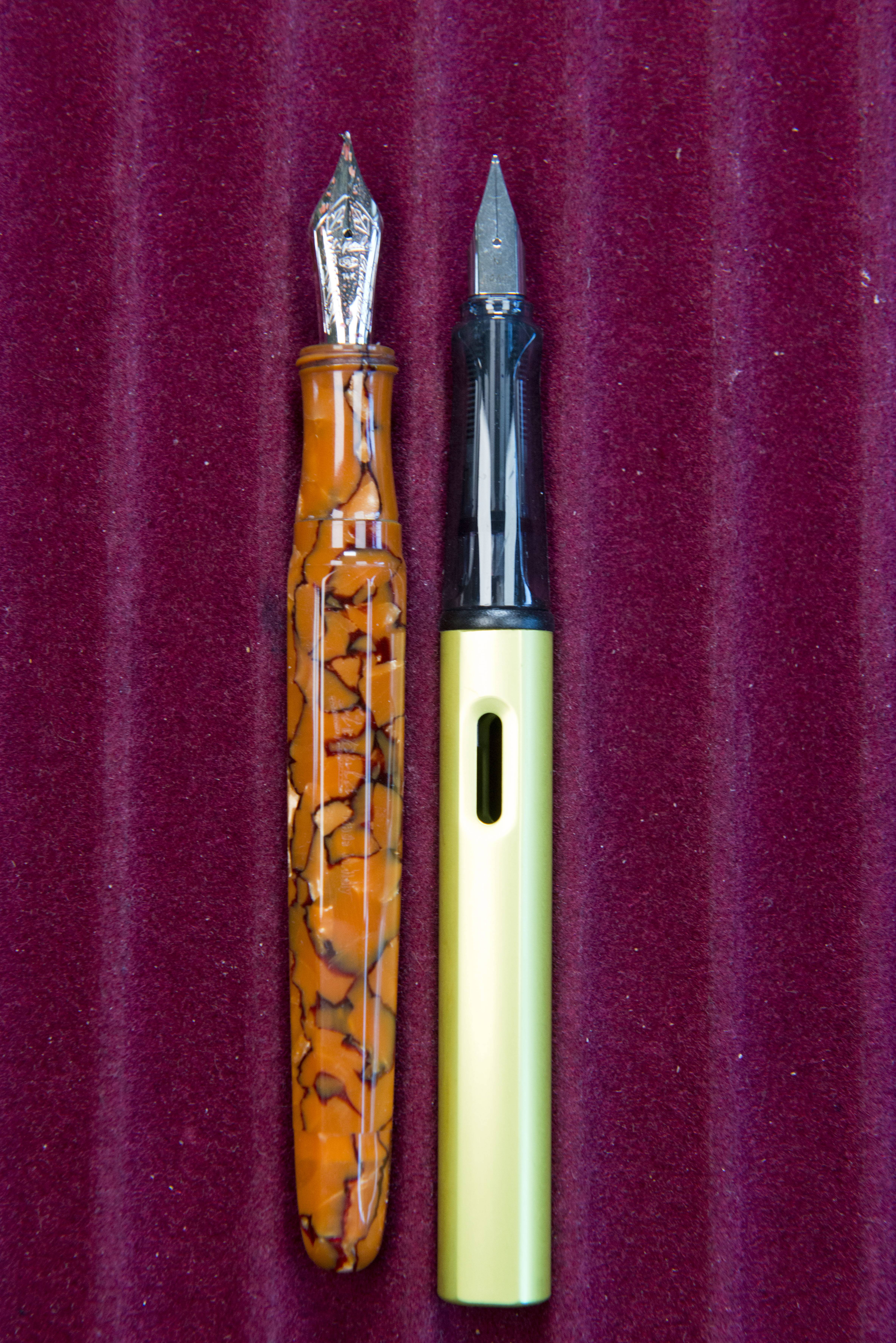 The pen came in a red clamshell box with a 1950s look.  Around it was a cardboard sleeve.  Of interesting note, the sleeve (or maybe all the packaging) was for the wrong model – this being with the Alter Ego pattern and being #2, where as the box says it should be an amber pen (also celluloid) and #17. 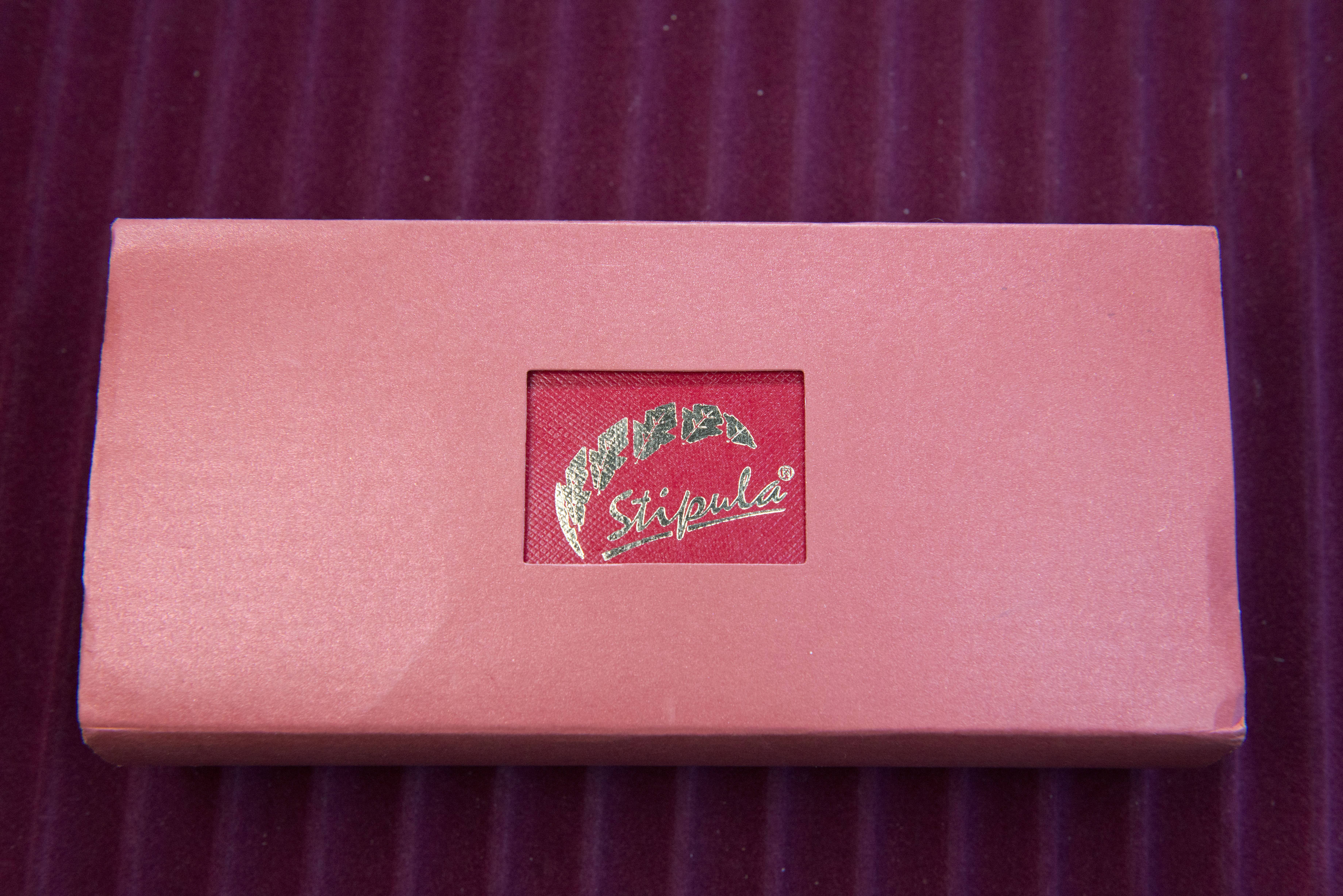 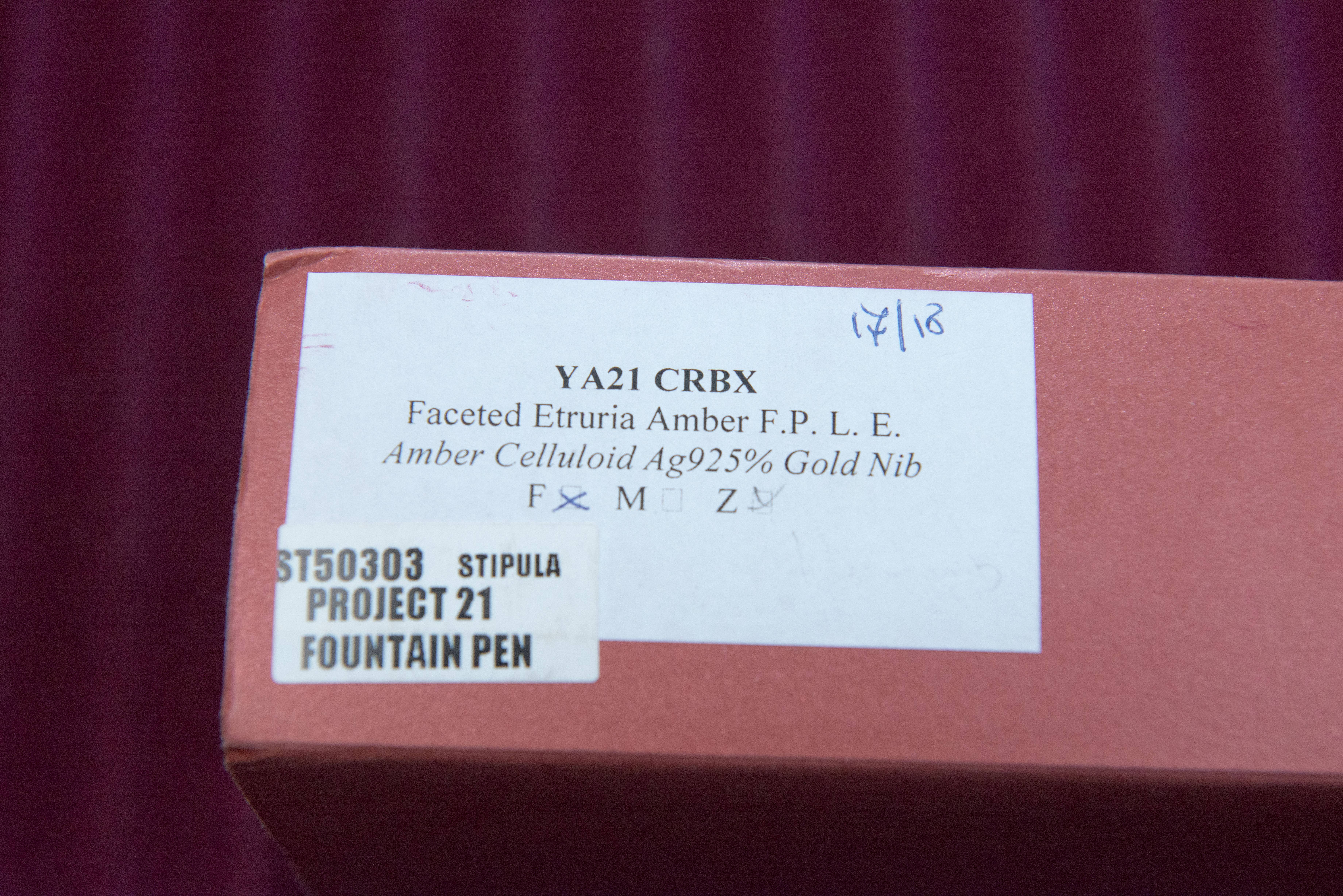 Note the box is to the wrong pen. 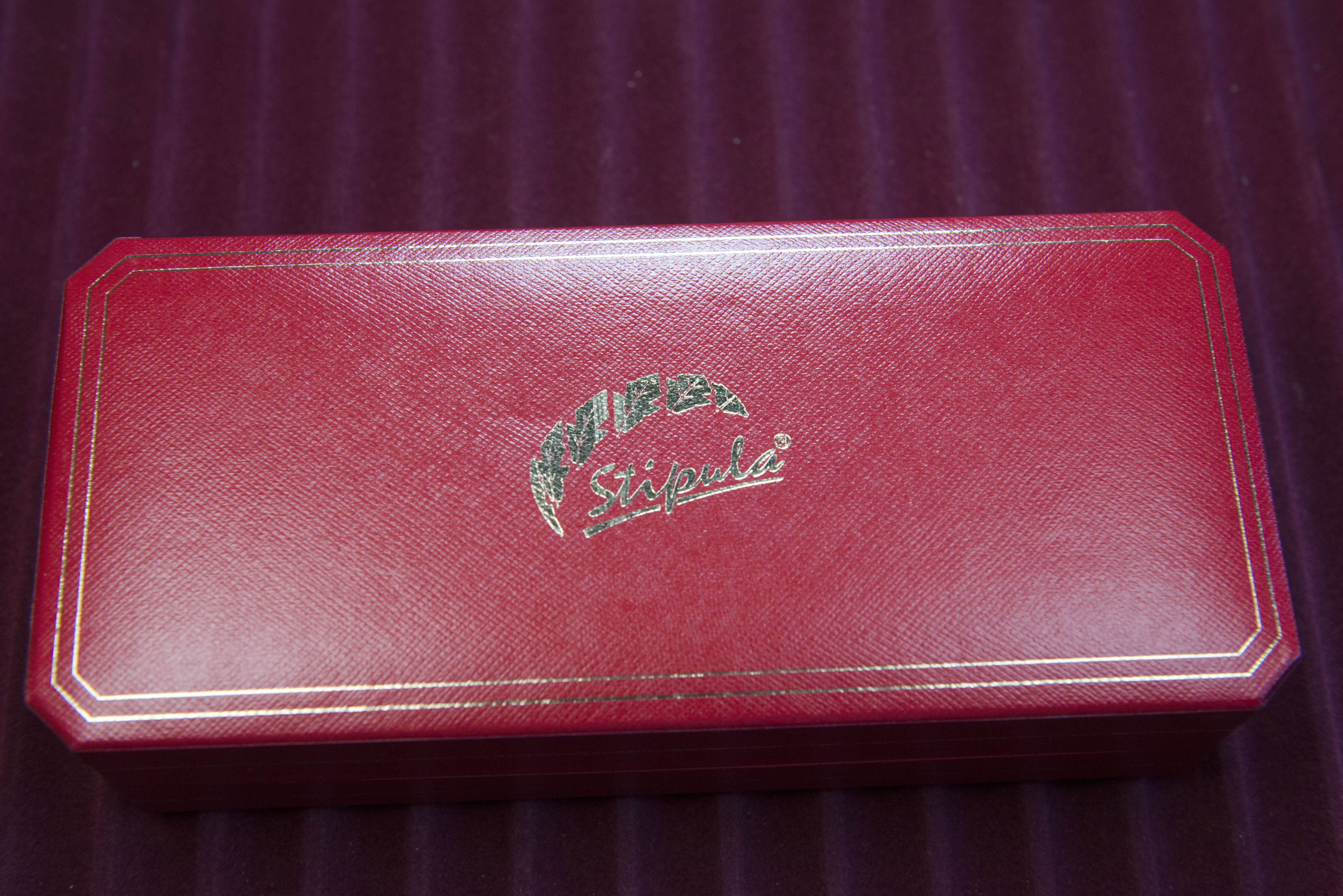 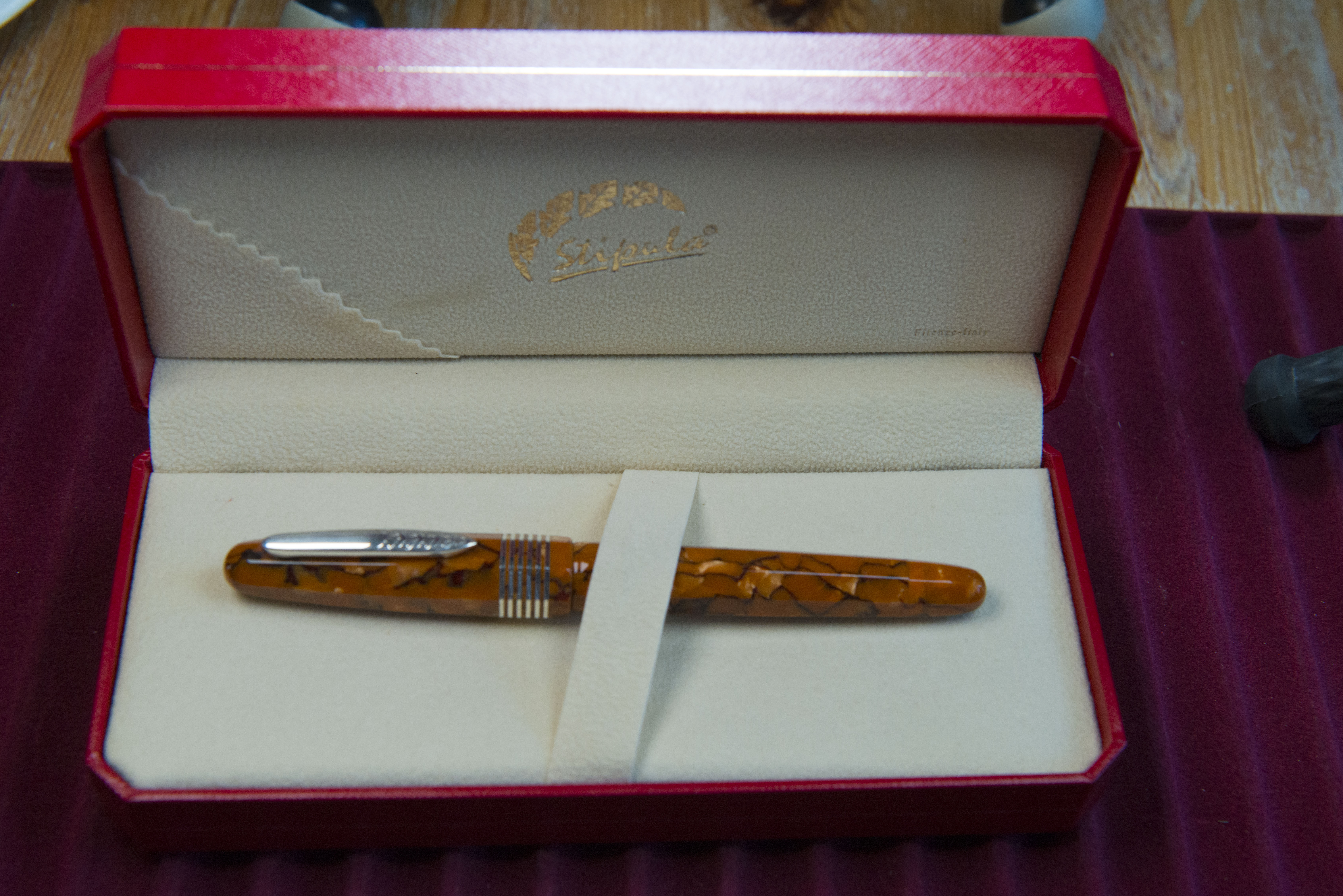 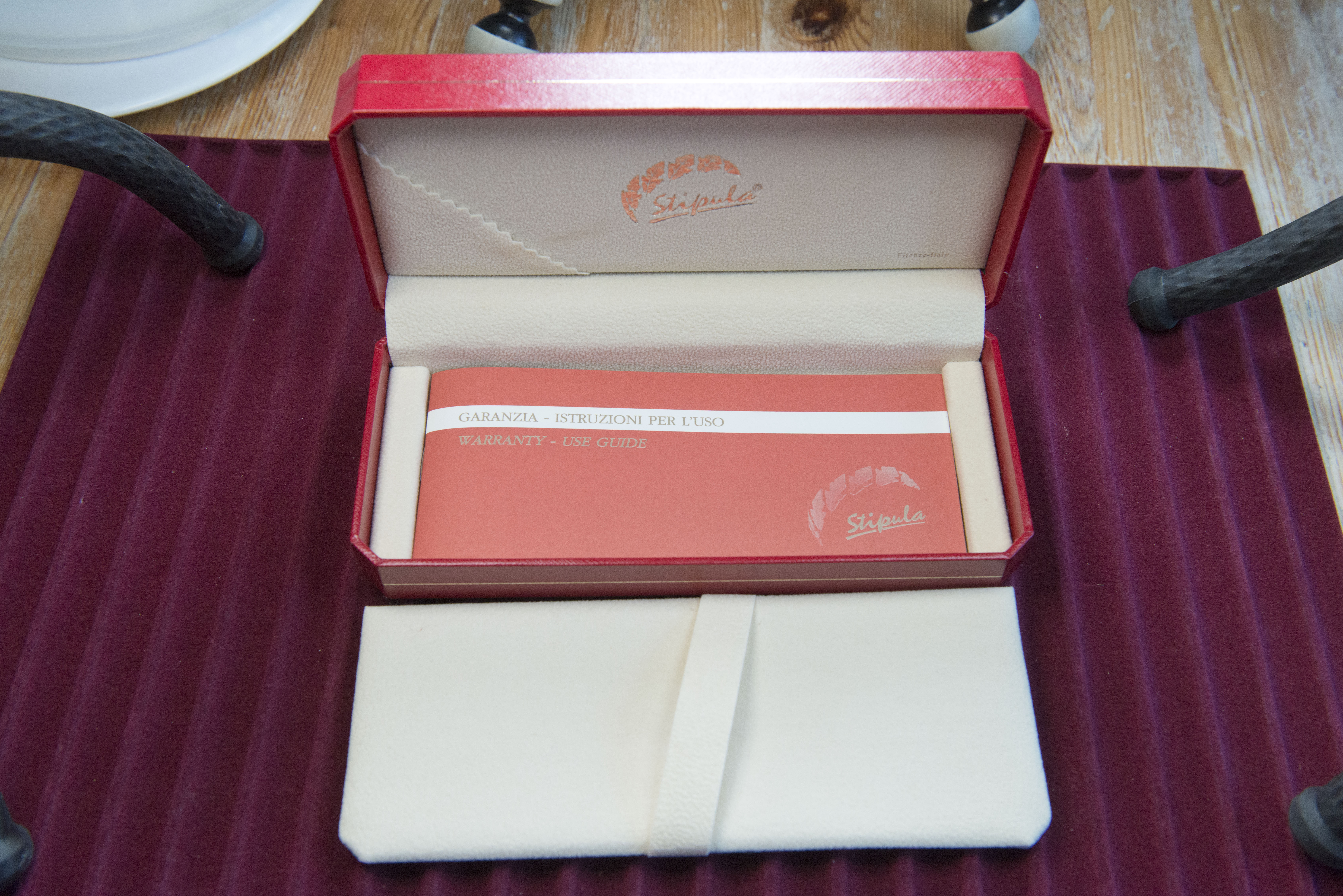 I bought a Lamy Imporium about 4 years ago, which regular readers will note has always been in my daily carry set.  Not long after I discovered the Lamy Persona on which it was based and contemplated getting the matching version.  About three years back a couple turned up at the London Pen Club.  He had been an avid fountain pen collector who had suddenly lost interest and so was selling off most of his large (over 100 pens) collection.  He brought with him the list and a black’n’gold Persona was on there.  I resisted until a few months later by which point I had lost contact.  Meanwhile I would see the occasional one at pen shows, but for silly money.  Move on to about 3 months ago and an advert was placed on a US hosted pen forum for a black’n’gold Persona on behalf of a friend of the advertiser and presently in the UK.  It was for a very good price and rang some bells, so I followed up and it was the same pen.  I bought it (review/comparison will come in time) and made the mistake of asking what other pens he had for sale (I was not intending on buying any more).  A turquoise OMAS 360 Vintage grabbed my attention due to the very low price – this was due to permanent staining on it.  I asked for photos and one of this Stipula was accidentally included.  I was caught in the trap.  Additionally there was another pen on my want list – a Platinum 3776 in jade celluloid also available for a good price and so three additional pens were purchased.  All four are in my current daily carry with two of them (this and the OMAS) probably staying long term.