To most in the UK, Faber Castell produce art supplies, the fact they also produce pens (and are possibly the oldest surviving pen manufacturer) passes the average person by as few high street stores stock their fountain pens.  Even then they are often over looked as the Ambitions and eMotions tend to be the only options and price wise start in the mid £60s, where as those few shops selling them will also have Parkers, Cross and Lamy pens starting around the £15-20 mark and many of their models for less than the cheapest Ambition.

The Loom sits somewhere between the WRITink and Basic/Essentio models and the Ambition, coming in between £30 to £50 depending on version and retailer, and so could be considered a more entry level pen and the first in their range with a metal body.  The two gunmetal versions cost around £8-10 more than the other models.

As with most of their pens, the Loom comes in a simple box along with an international standard short cartridge in the barrel of the pen and an empty spacer in the nib section.  The converter costs extra, but the Loom will take any international converter such as a Schmidt K5. 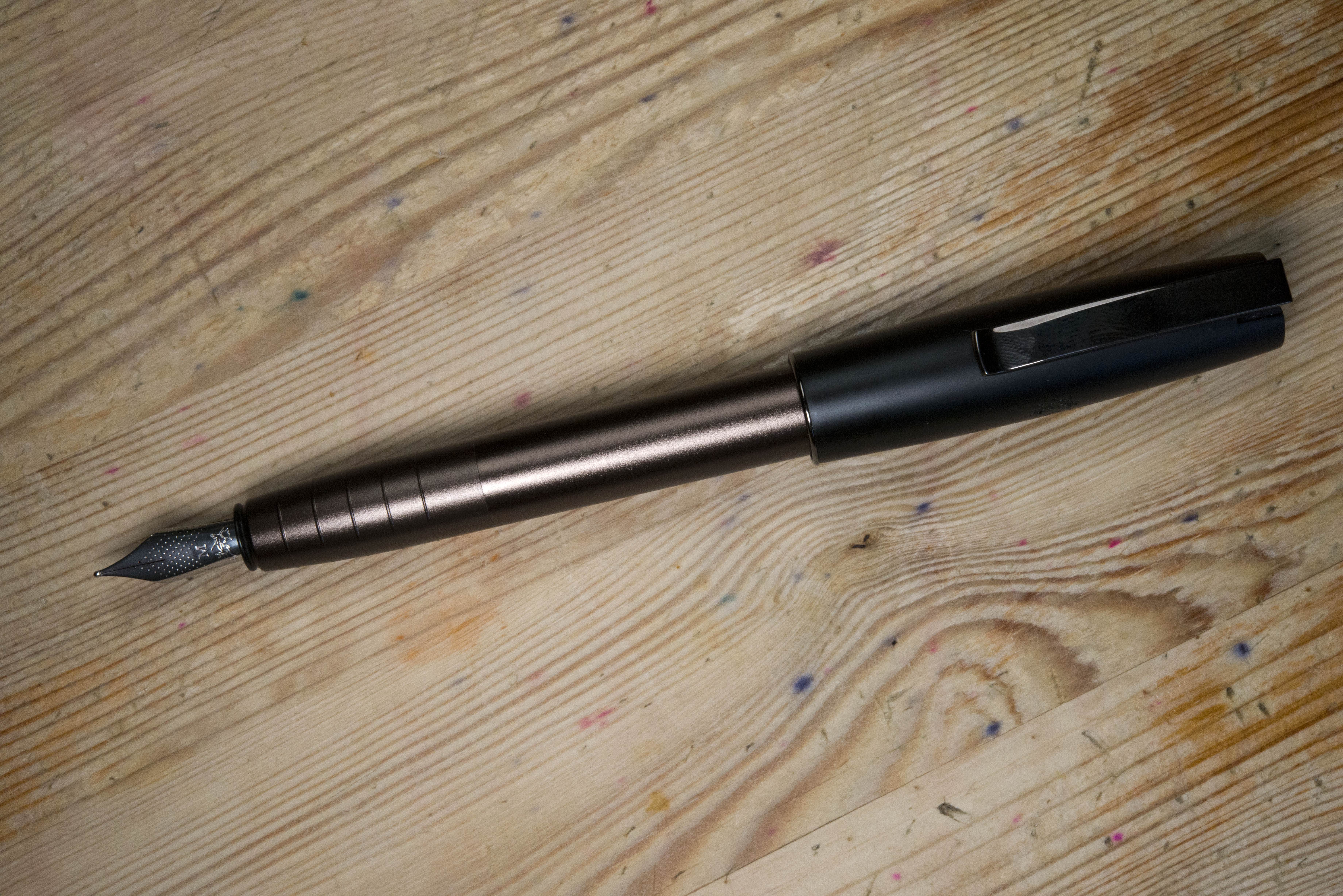 Appearance wise, there is a straight unmarked barrel and a curvy cap which adds a distinctive character.  There is a large clip along one side, and Faber Castell branding and name on another, a quarter turn below the clip.  Uncapping, the section tapers down towards the nib.  Additionally the appearance of the material changes from the smooth appearance of the barrel to a slightly textured section with 5 raised bands, presumably both to aid grip.  The nib is the classic Faber Castell dimpled affair with no breather hole found on all their pens bar the WRITInk and Grip.  The cap pulls off and snaps on, both with a positive action and a satisfying click.  It is secure and will only rotate when forced, which if done anti-clockwise will actually unscrew the nib section from the barrel.  The clip is sprung hinged and is the same piece of steel as the engraved disk on the end of the cap.  Being metal it is not the lightest of pens, but at the same time it’s comparatively light in the hand, especially compared to the more expensive models in the Faber Castell line up. 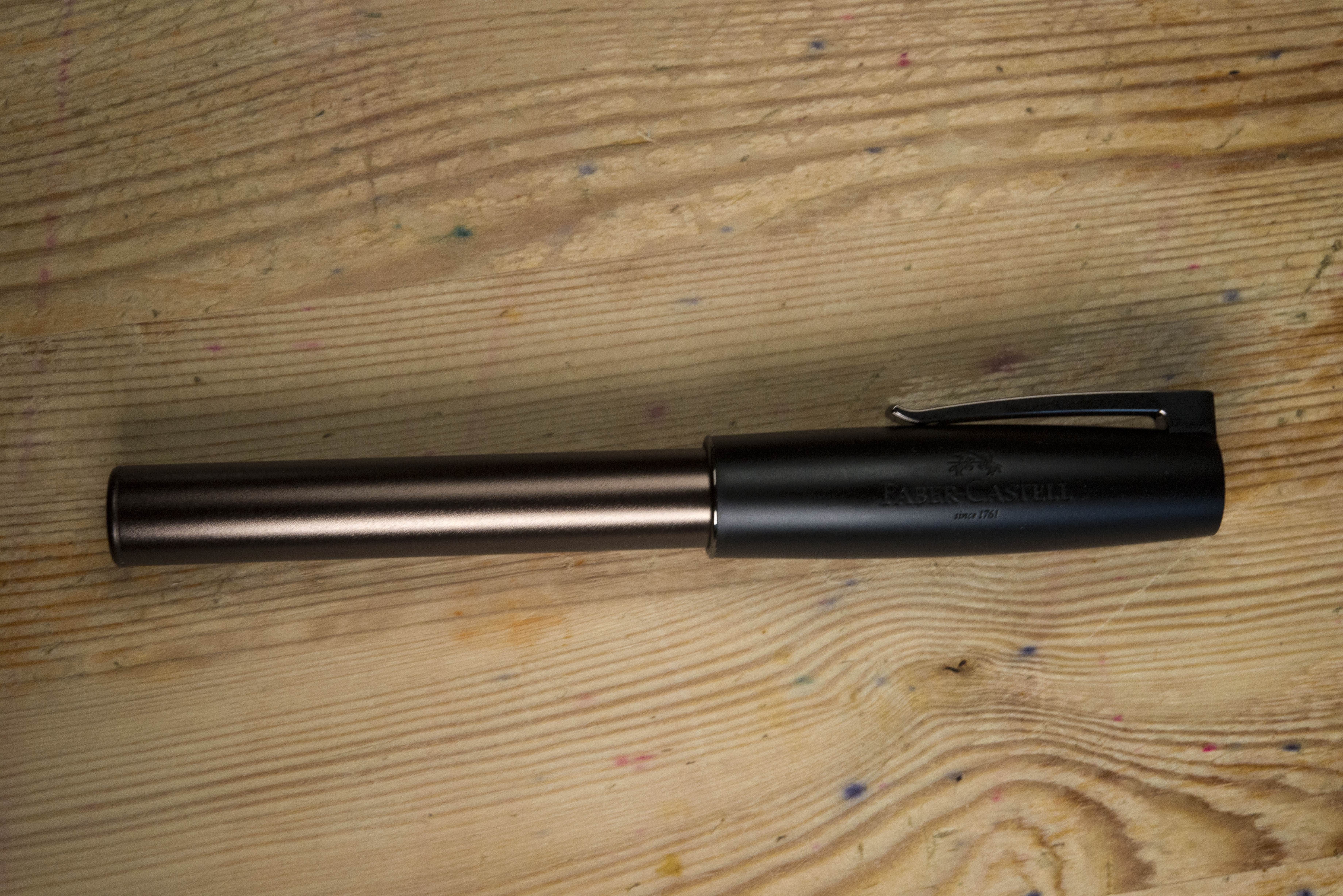 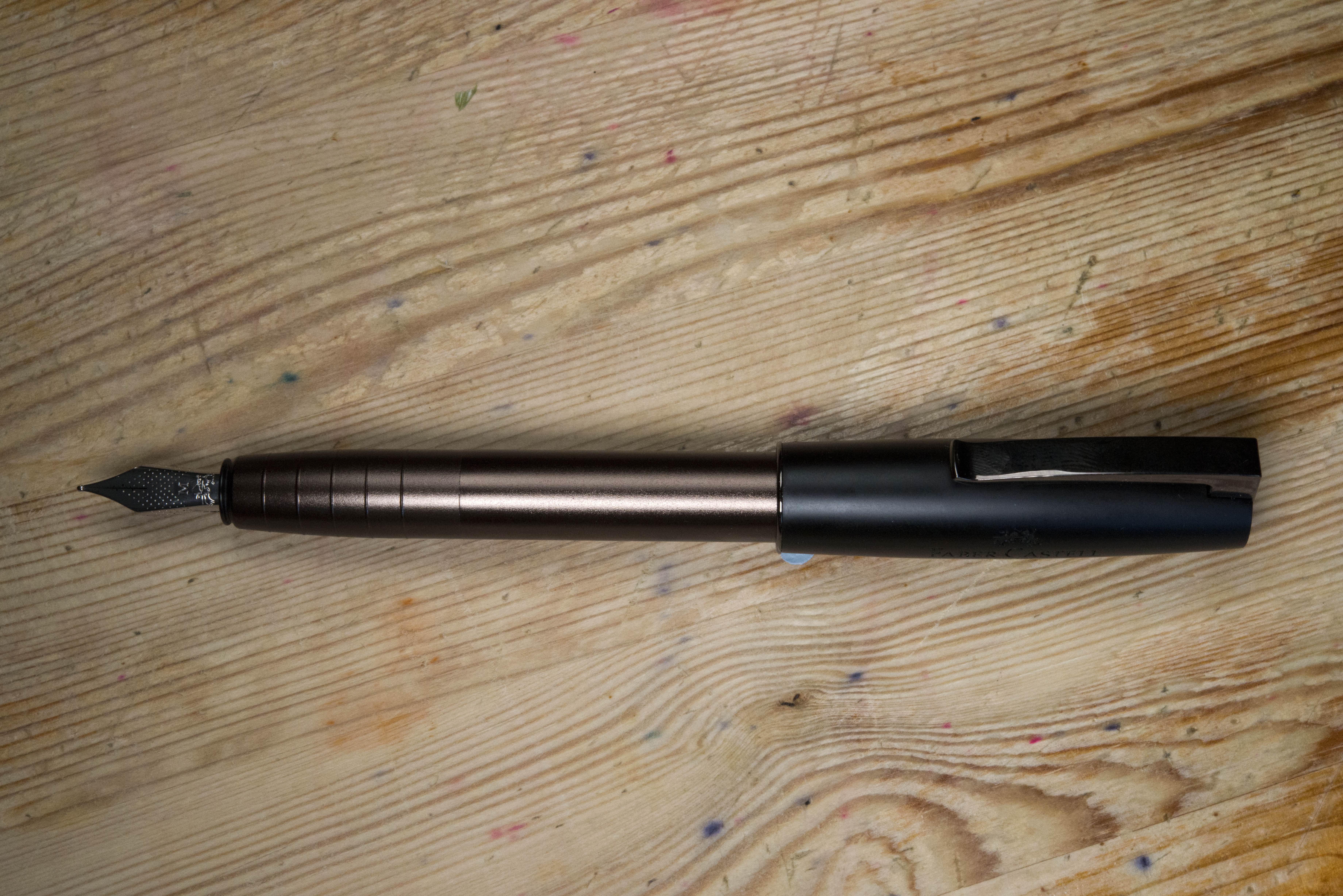 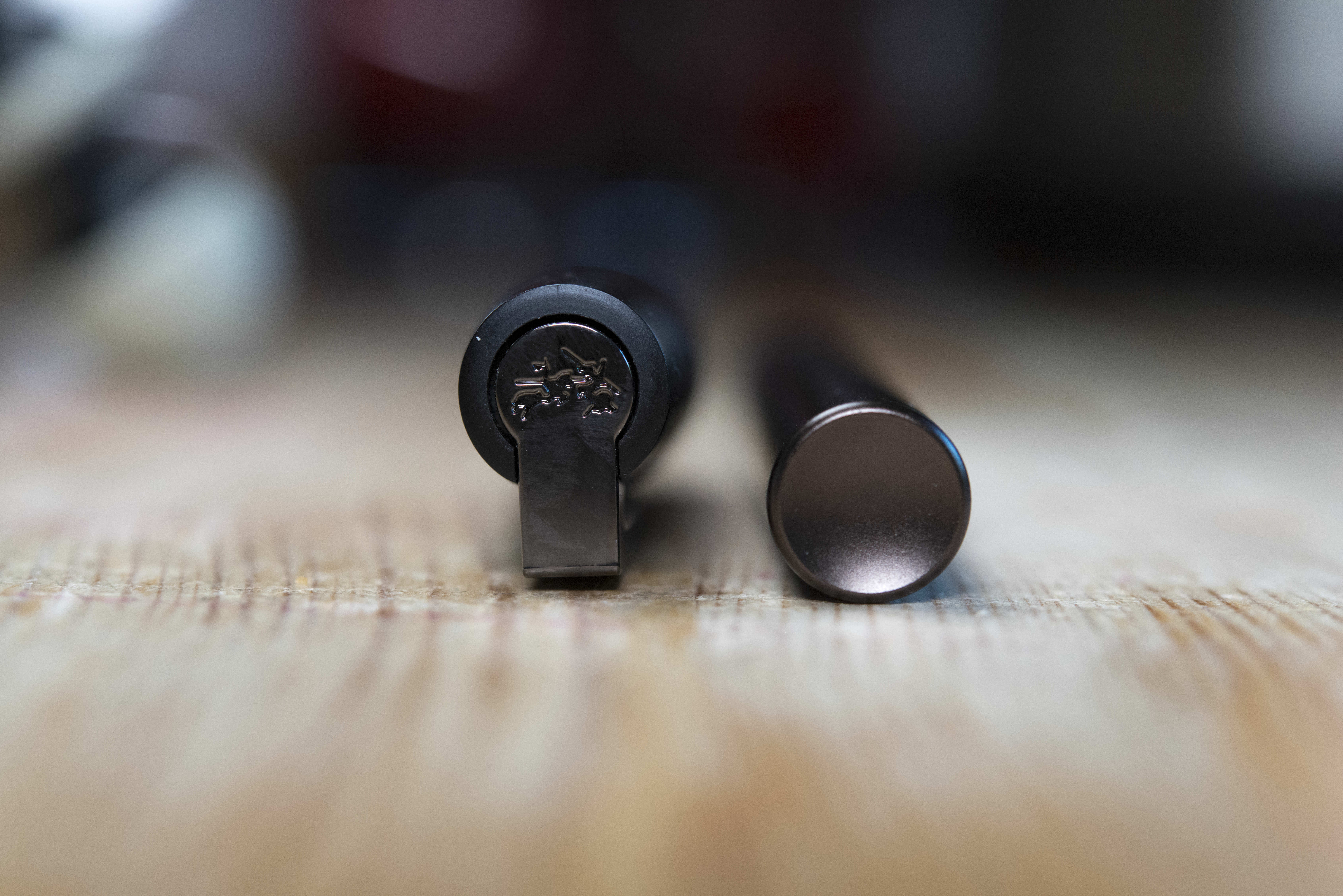 I first came across the Loom when I picked up a black capped one second hand for a friend who found my spare eMotion a bit too heavy and uncomfortable due to its shape.  I tried it and decided that I’d keep it if he did not want the pen.  Alas he did.  Shortly after the two gunmetal models came out (one shiny, one matt) and I got to try one of those.  I’m sure at the time the gunmetal ones felt heavier due to the metal cap.  Checking the Faber Castell website for measurements they mention no differences.

I picked up this matt gunmetal version with a medium nib on International Fountain Pen Day 2018, using a discount code.  It came in the Faber Castell gift box, for which some vendors do charge extra.  This comprised of an open ended patterned box, and inner plain white box with a slide out tray.  Functional and does the job. 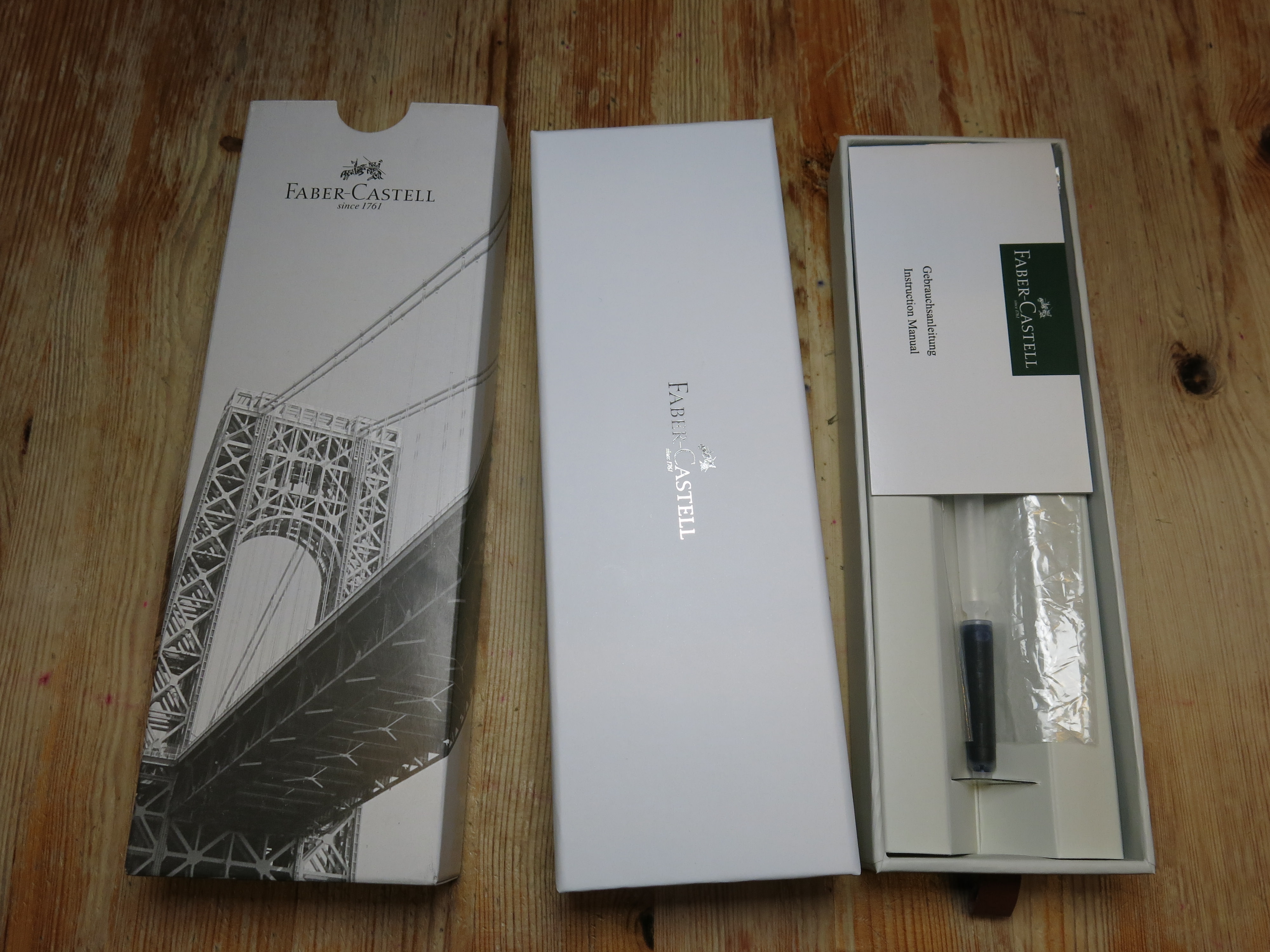 The pen itself felt lighter than I remembered, it could be my memory playing tricks or it could be that the model has been revised.  Certainly the cap colours on the standard version were changed earlier this year.  The second thing that surprised me was the grip.  When I first tried a loom, and not long after when I compared it with a gunmetal version, the grip felt comfortable and secure.  On this pen it does not.  It feels slippery to touch and unless my thumb and forefinger sit between two rings (in a tripod grip) it does move about.  Get my hold right and it is a positive experience, but it is annoying that I have it shuffle a pen around to get a secure writing hold.  Balance wise the pen is slightly nib heavy, but it feels comfortable in the hand.  Posting the cap and the weight becomes more neutral though I found I was unconsciously holding the pen slightly further back on the grip.  In the position is was actually less of a slippery hold. 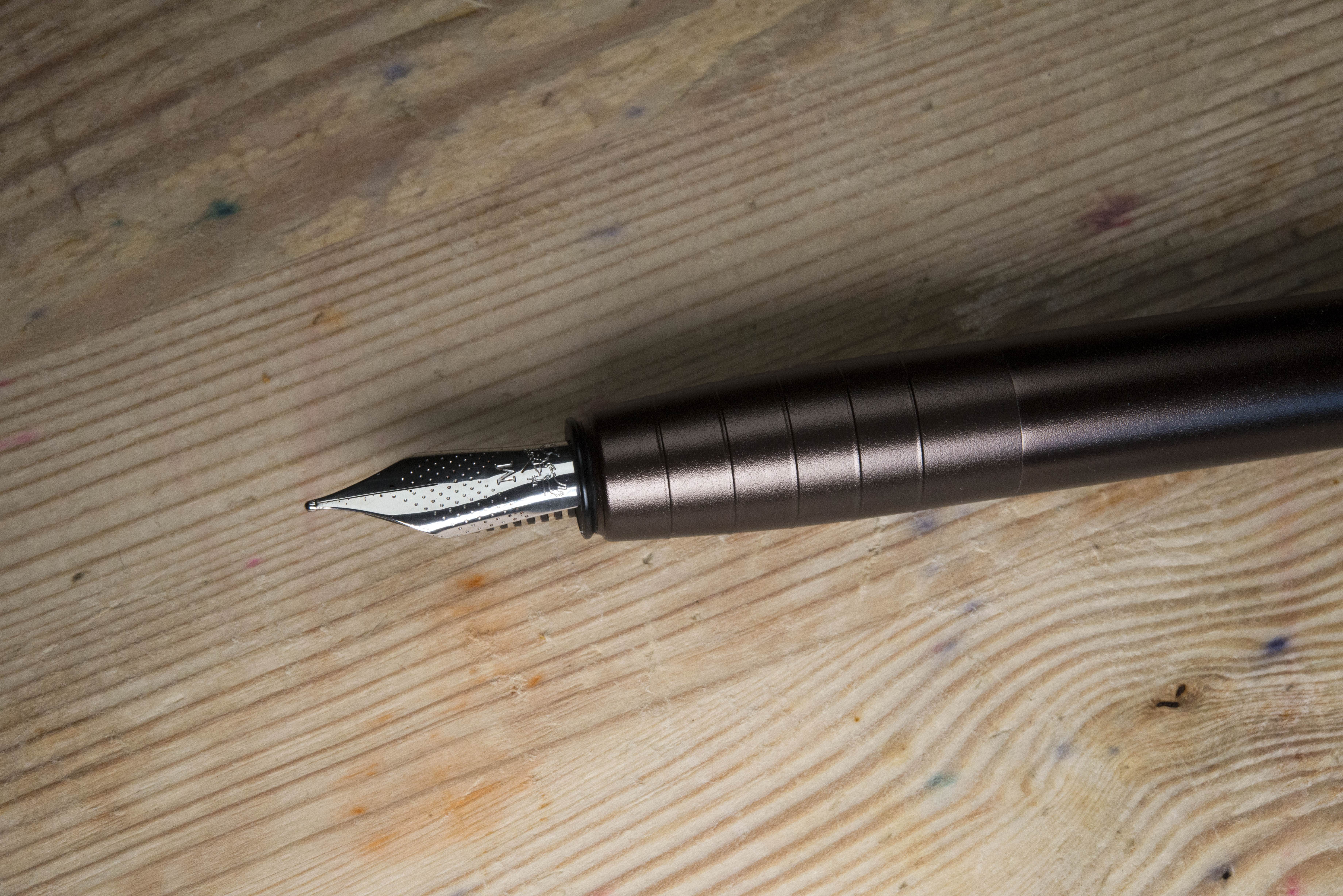 The writing experience, once a decent grip has been obtained, is superb.  I still stick to my views that Faber Castell nibs are not only possibly the best steel fountain pen nibs out there from a mass manufacturer, but also better than many a gold nib.  This is all based on personal preferences of course, but it is buttery smooth, has a little flex (only slight) and is on the wet side.  The ink I have been using is Graf von Faber Castell Hazelnut Brown, which is known to be on the dry.  The only reason it was chosen was the need to finish a sample and it was a suitable colour to match the pen.  It was nothing to do with keeping to the same brand. 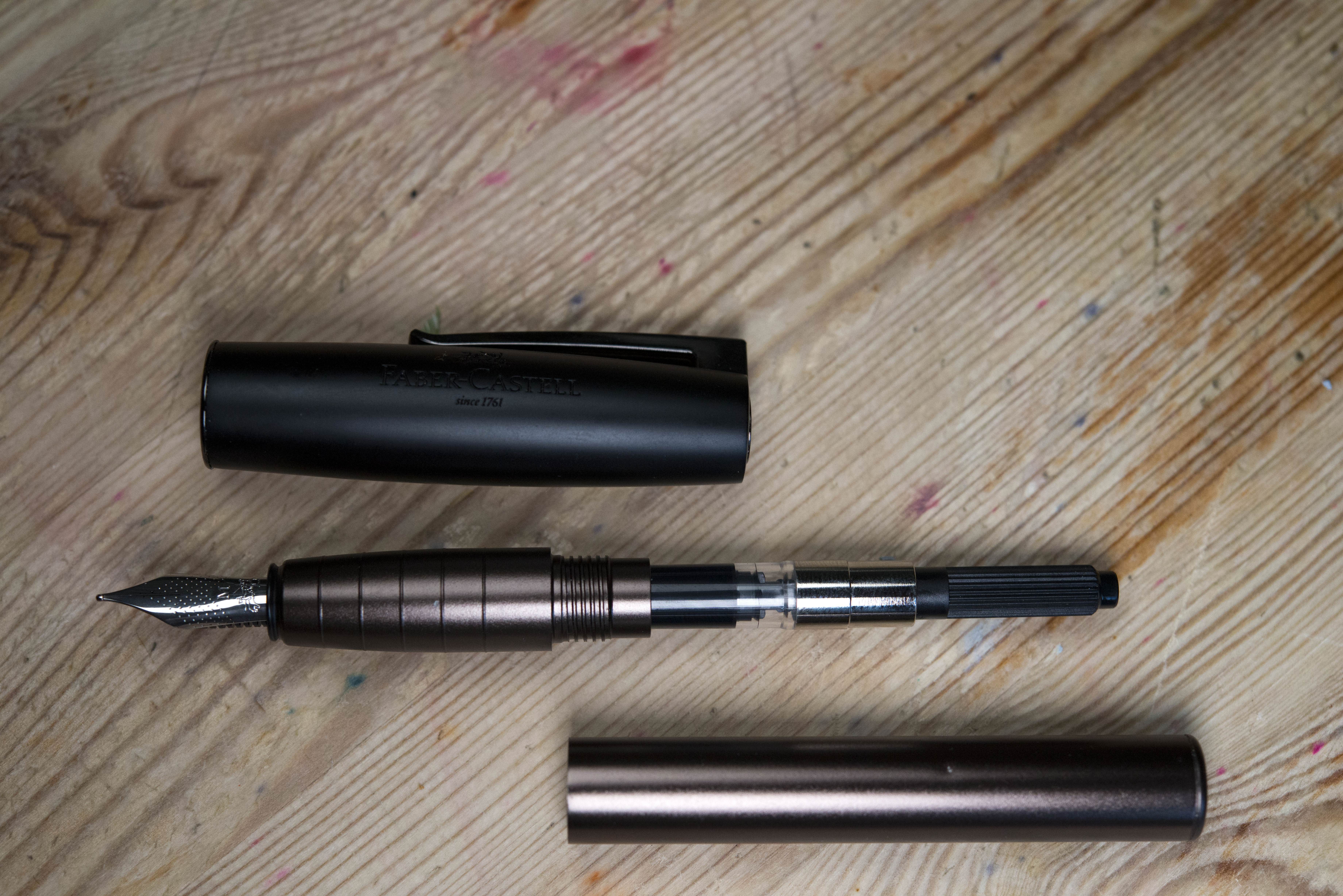 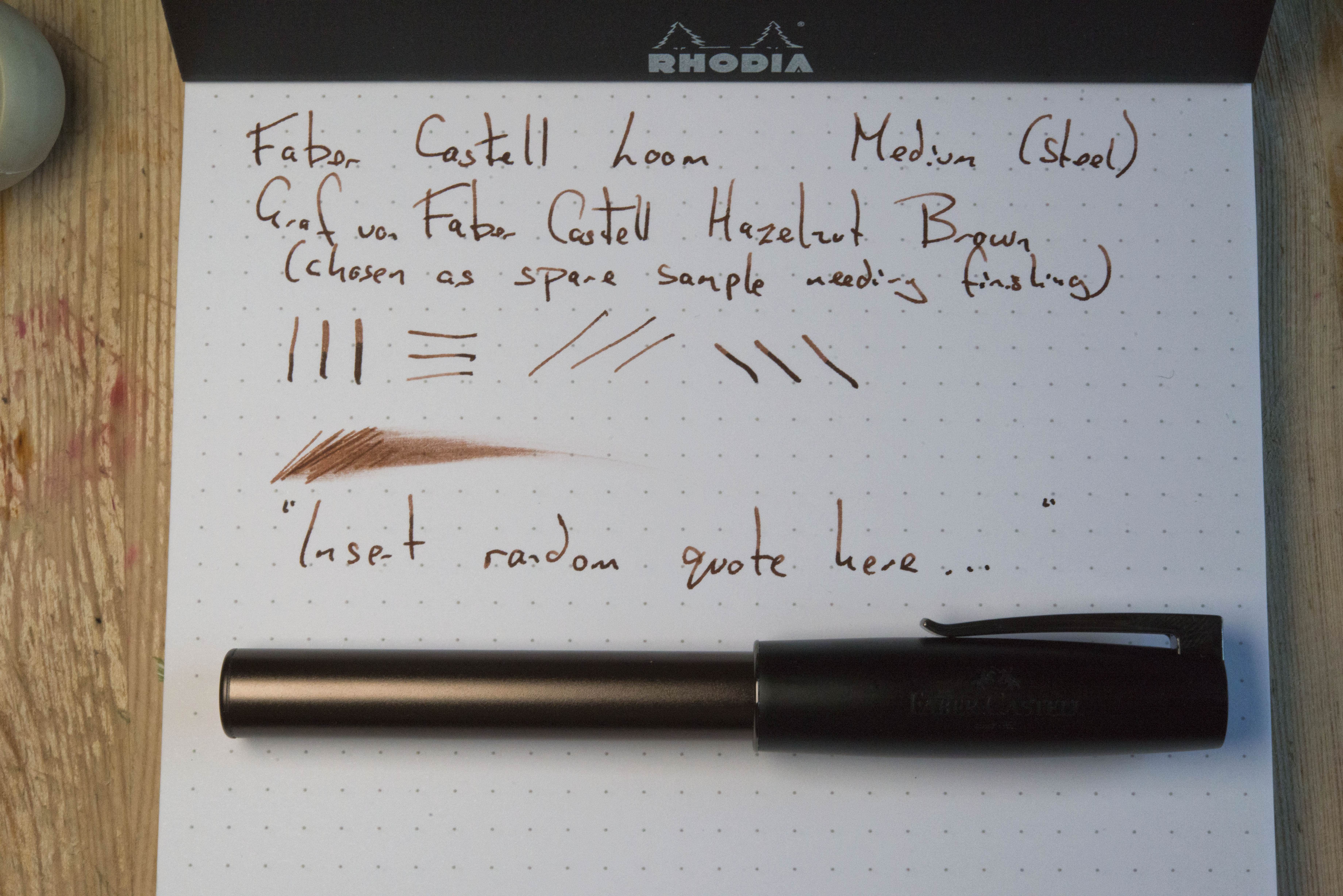 The pen feels tough, though not quite in the same solid way of the Ambition or eMotion, however this is an illusion as I actually managed to dent the barrel in my trouser pocket.  I’m not sure quite how as I did not have keys or loose change in there, it may well have just been a tough seem. 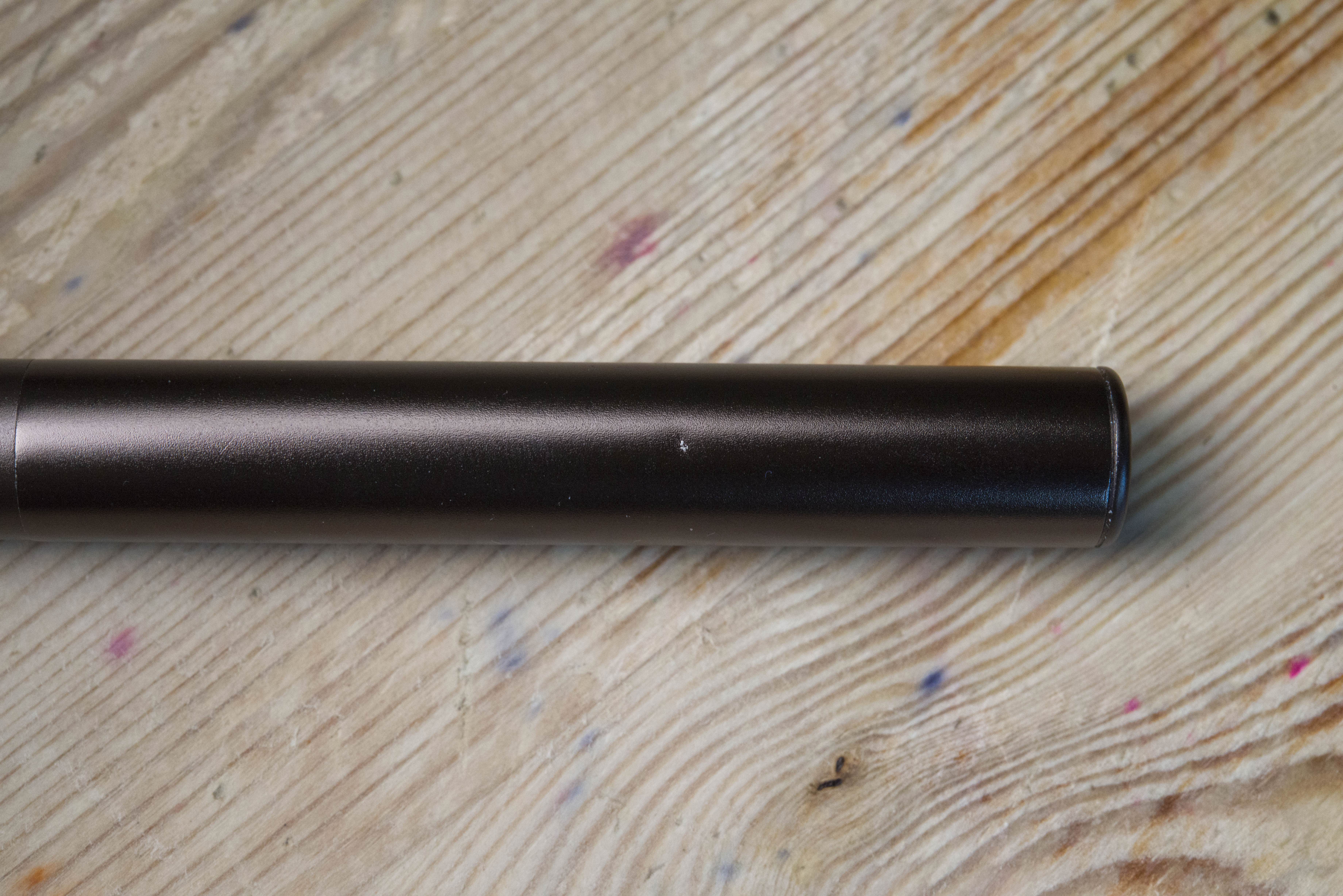 The clip is very effective, holding the pen securely in a pocket and is at just the right level of tightness/resistance to make clipping and removing the pen easy to do.  There is no fear of the pen falling out.

The question comes, would I recommend this pen.  Get a comfortable hold and it is a great pen to use, but the slippery nature of the grip section is a real negative for me.  I’d like to try an Essentio to see what that’s like as it has the same nib, and is also about £10 cheaper,  but as the Basic it had a bad reputation for the both the body and cap cracking.  Certainly if you’re happy with a thinner pen and the tube nature of the design, then I’d recommend adding another £10-20 to your budget and getting an Ambition.  Over all I think if I had tried this pen in a shop I probably would have skipped the purchase.

Please note this pen was bought with my own money using a discount advertised and available to all. 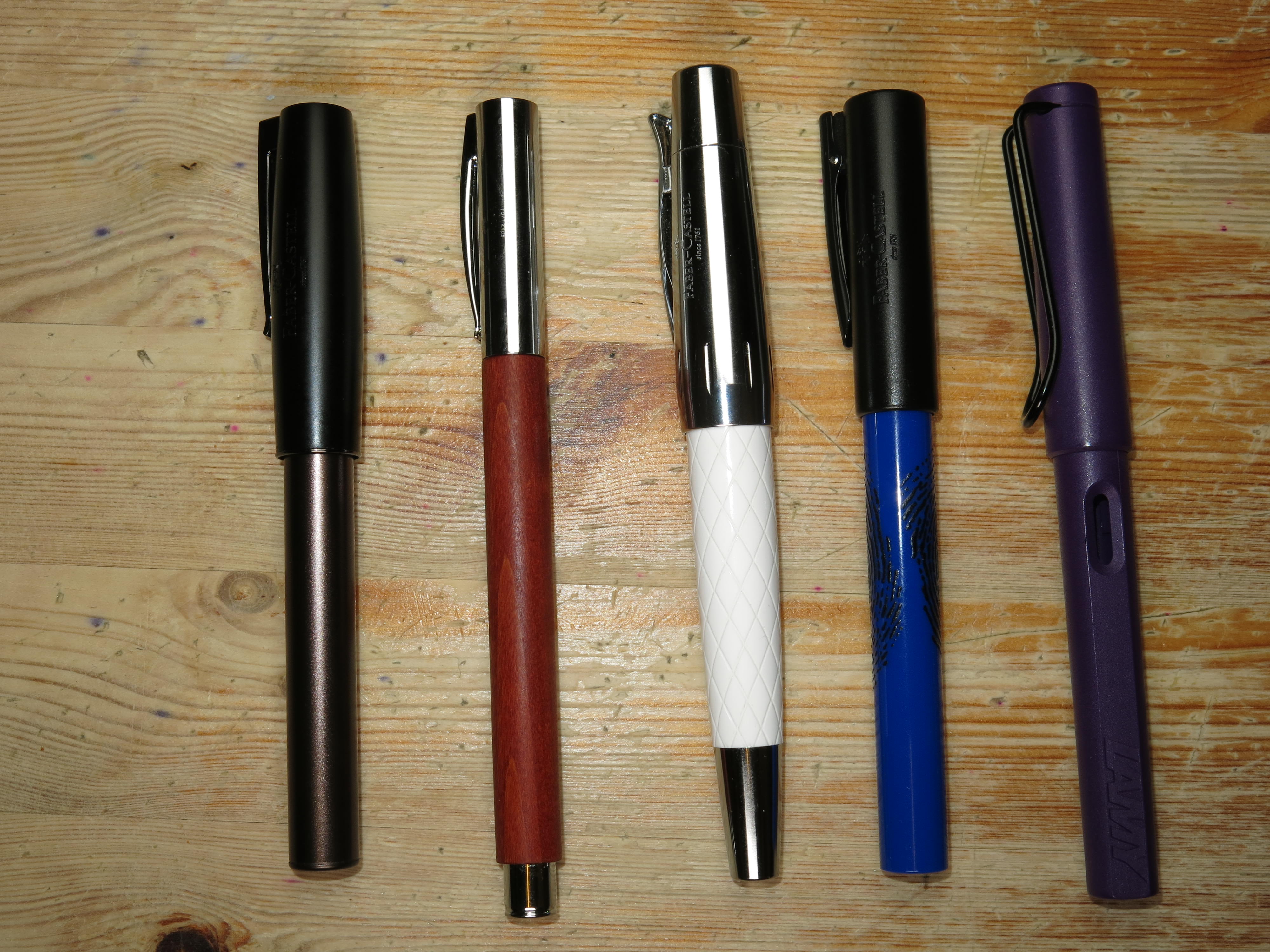 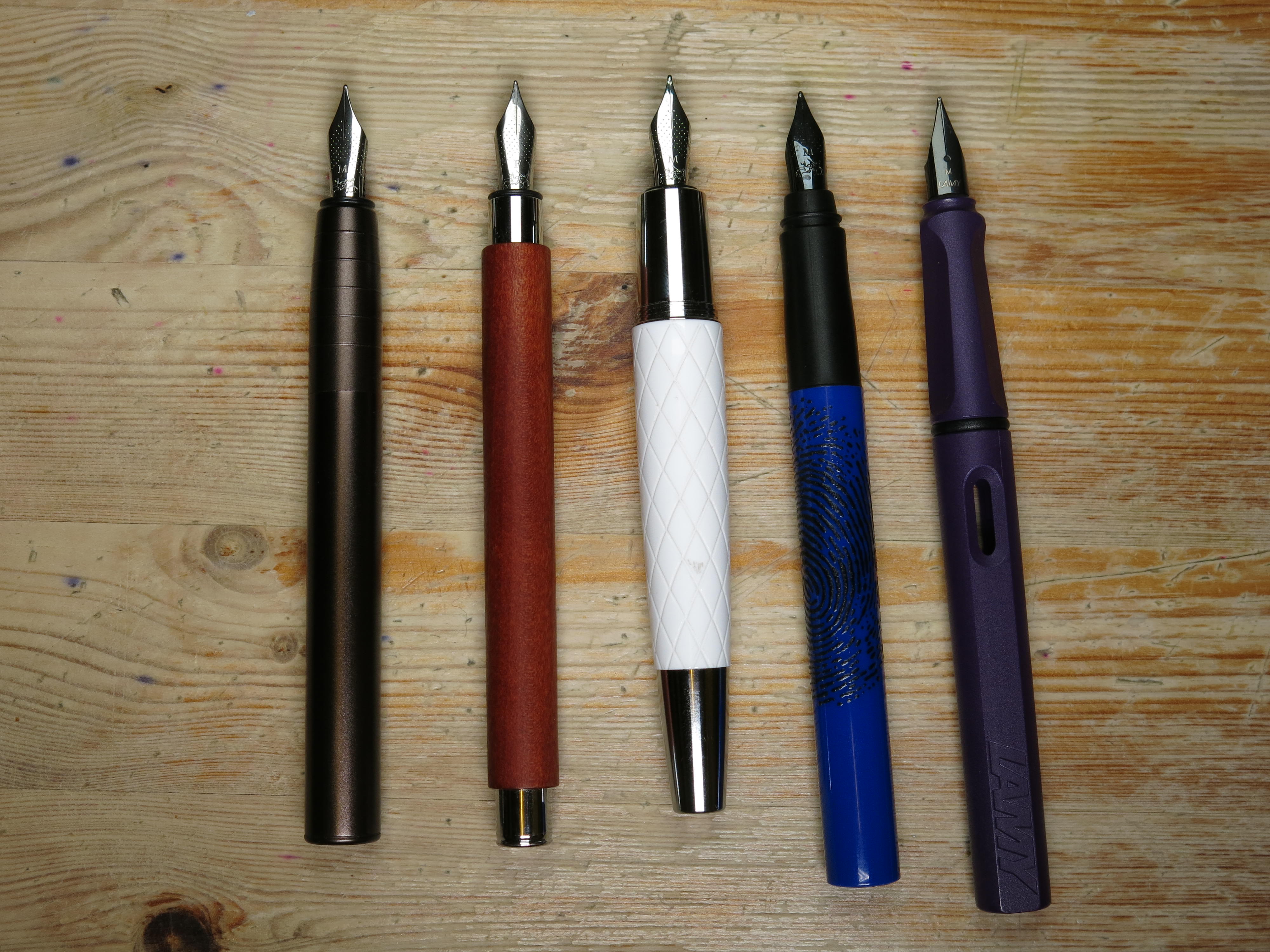 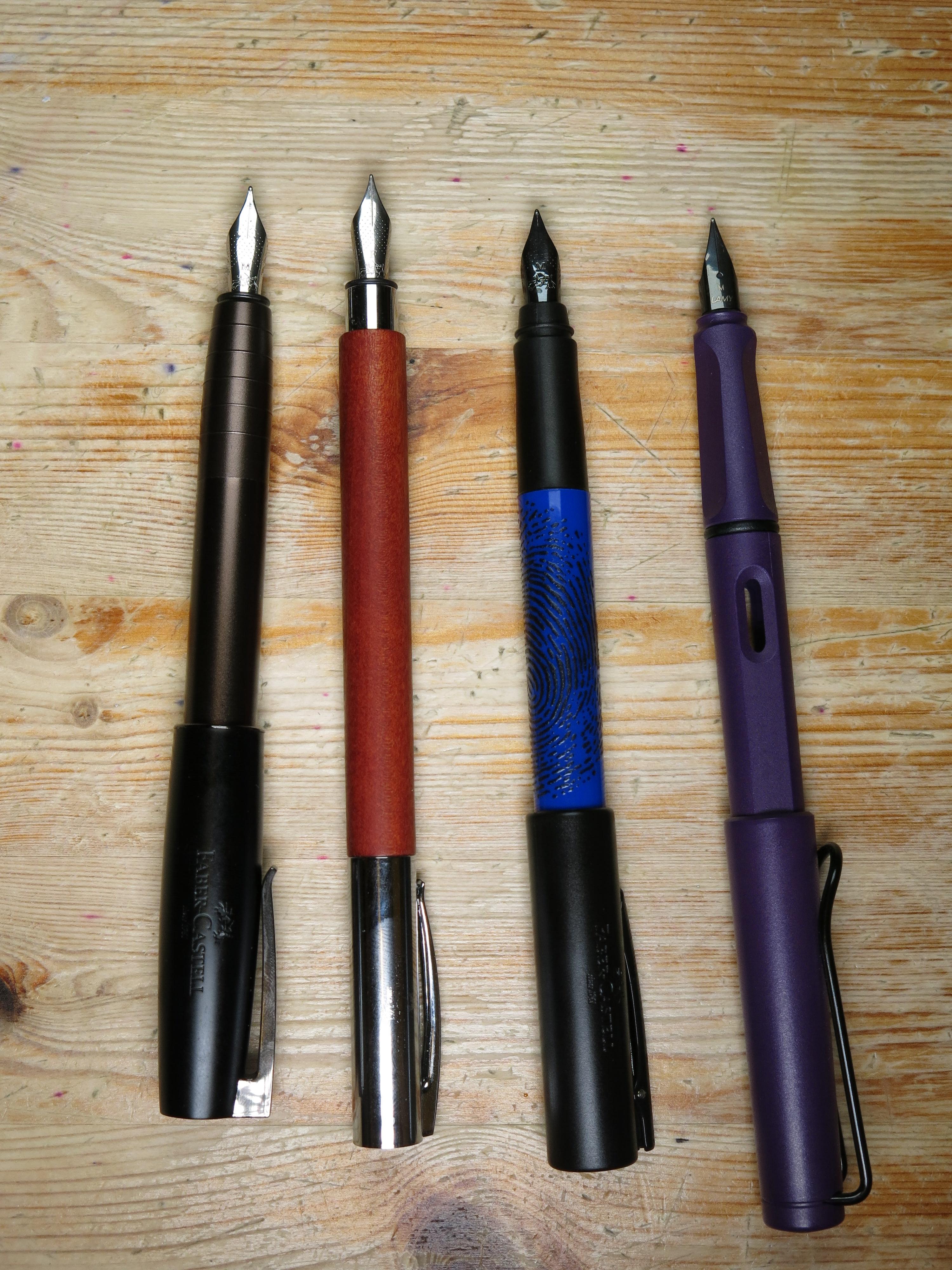 —-Edit Saturday 1st December 2018———
Today I got to compare the pen with a Shiny Gunmetal Loom purchased about a year ago. The latter (left in the picture below) is heavier and also has a different feeling grip which is not slippery.  Looks like the entire range was updated, but for the worse. 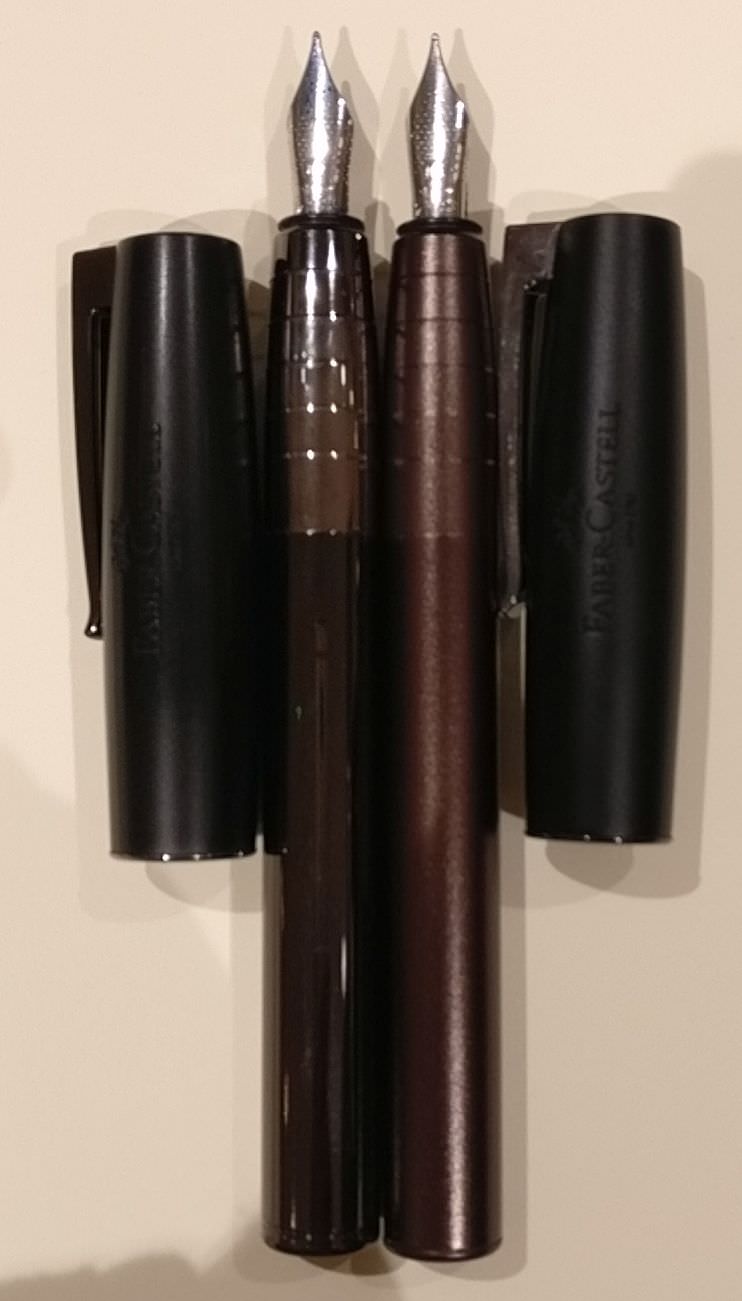 And lastly so a suitable thumbnail is picked up