Readers are probably going to wonder about the lateness of this review, as this pen has been out for almost half a year, and I even got mine around five or six weeks ago when Chatterley Luxuries had the pen heavily reduced in all four colours, plus the honeycomb version.

Based upon online images I went for the Malachite Green version with a fine nib.  It arrived quickly in the usual Pineider packaging, which is the same as for the steel nibbed Avatars and presumably all other Pineider pens for the moment). 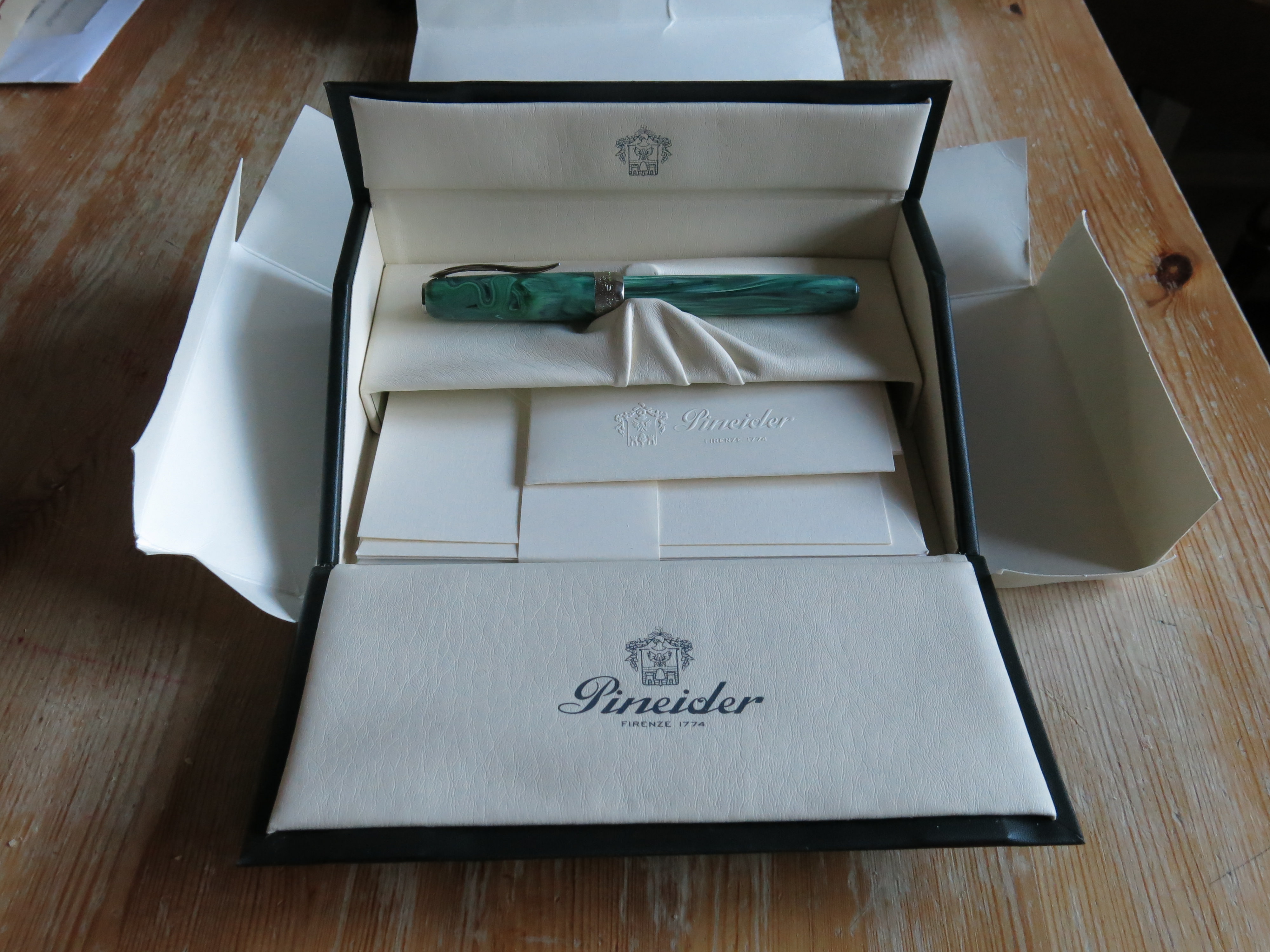 Initial impressions were mixed.  The colour I felt was somewhat flat and two dimensional.  The streaks appear to be on the surface and have no depth and there is no translucence or chatoyance.  It was also lighter than in the photo though I found the same happened when taking my own shots, which do appear to match the ones on the online stores.  Annoyingly, a friend also bought a couple at the same time, another green, and a Rodolite Red, which I had ignored when buying due to it looking too dark, where as in the flesh, though also suffering from being flat and lighter coloured in nature, I much preferred and regretted not choosing.  In many respects I’m reminded of the Van Gogh range of pens from Visconti, though those pens came in a box containing a print of the picture which inspired the specific resin, giving context.  Here not so. 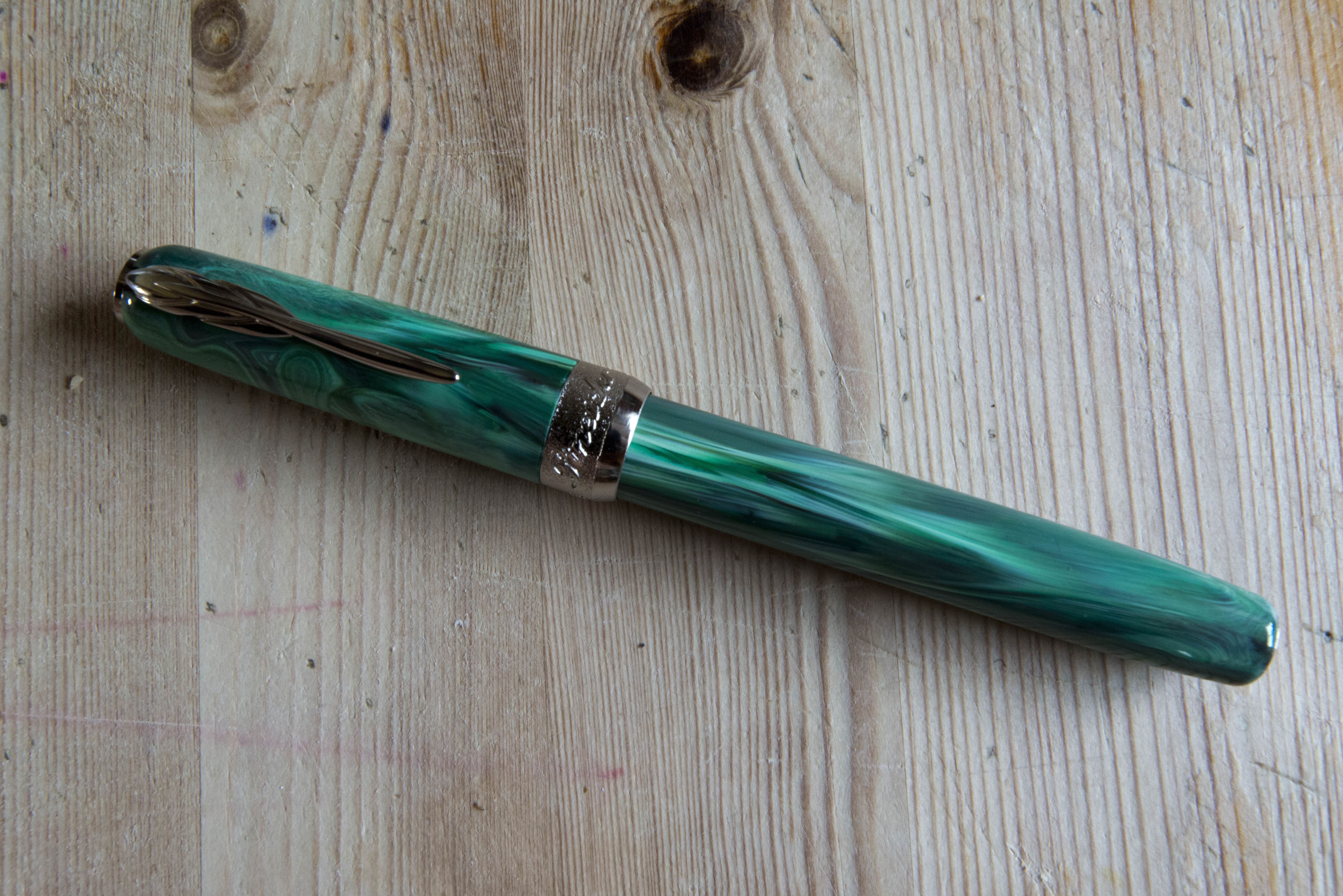 With the patterns on the green and red pen, one can’t help see similarities with pens from Visconti, further enhanced by the magnetic cap and the style of the finial (though this one is not removable).  It could be contemplated if, on leaving Visconti and joining Pineider (with all the rumours about why), that Dante Delvecchio carried on with variations of existing designs rather than going back to the drawing board and starting afresh.

Capped, the pen, despite my reservations on the resin, looks and feels solid, well proportioned, and with character.  The finial is simple with Pineider embossed on it, though to me it is upside down as I personally consider the clip to be the top of the pen when on its side.  The clip is elegant, in the shape of a quill, and spring hinged within the top of the cap.  The classic double curve shows the feathers curving round near the pivot and the clip slips over a pocket seem with ease.  It is relatively lightly sprung and as a result it will slide out of whatever you’ve secured this to if pressure is applied below, such as when dumping down a jacket.  I personally would not risk putting this in a pocket where the pen may be pushed outwards.  While I have concerns over how easy it to open the clip and how slippery the inside also is, it feels solid, returns positively when opened, and feels like it will last a lot of punishment.  I would have to say though, the clip, regardless of how well it lifts and is constructed, fails at its prime function, to securely keep a pen in a pocket. 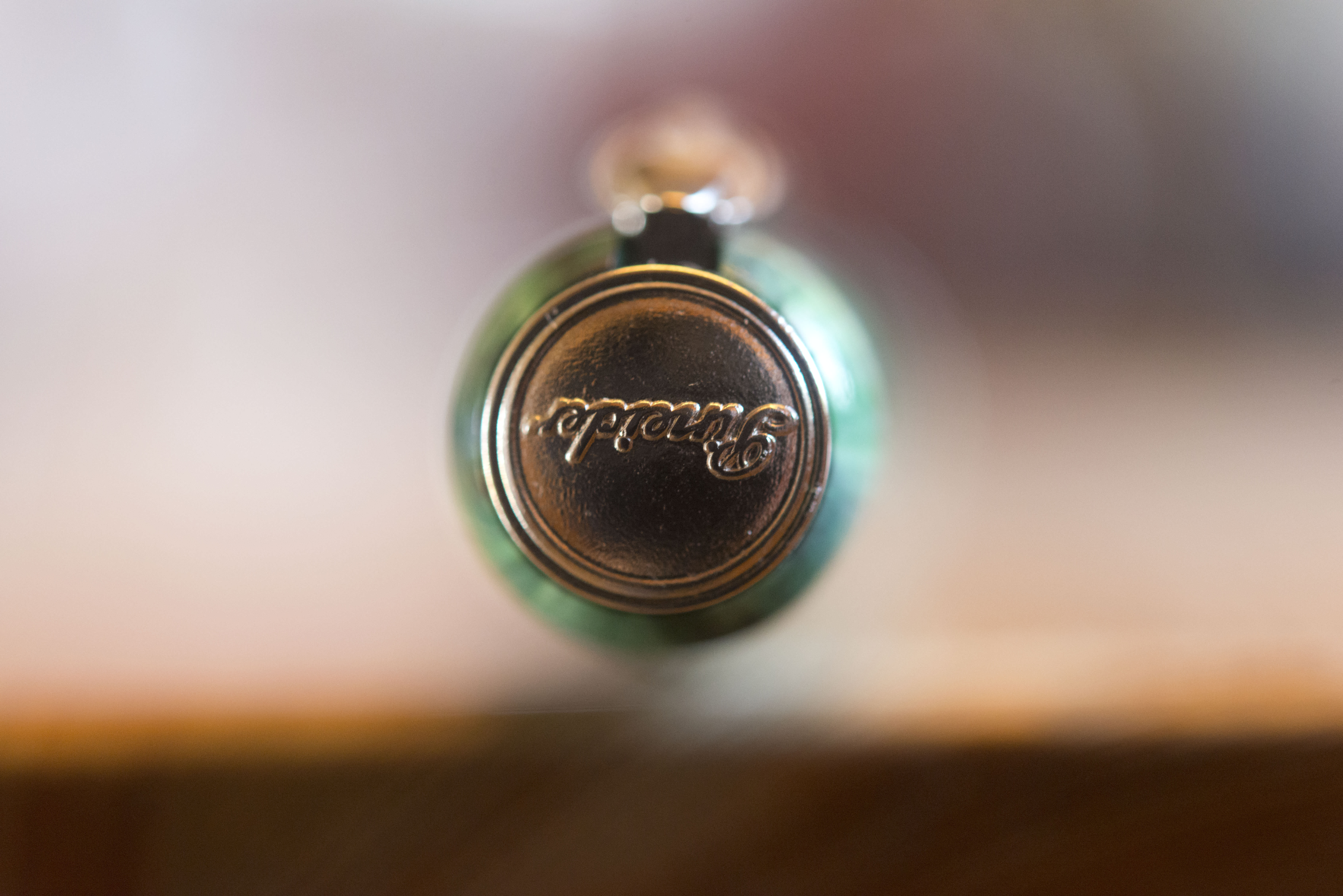 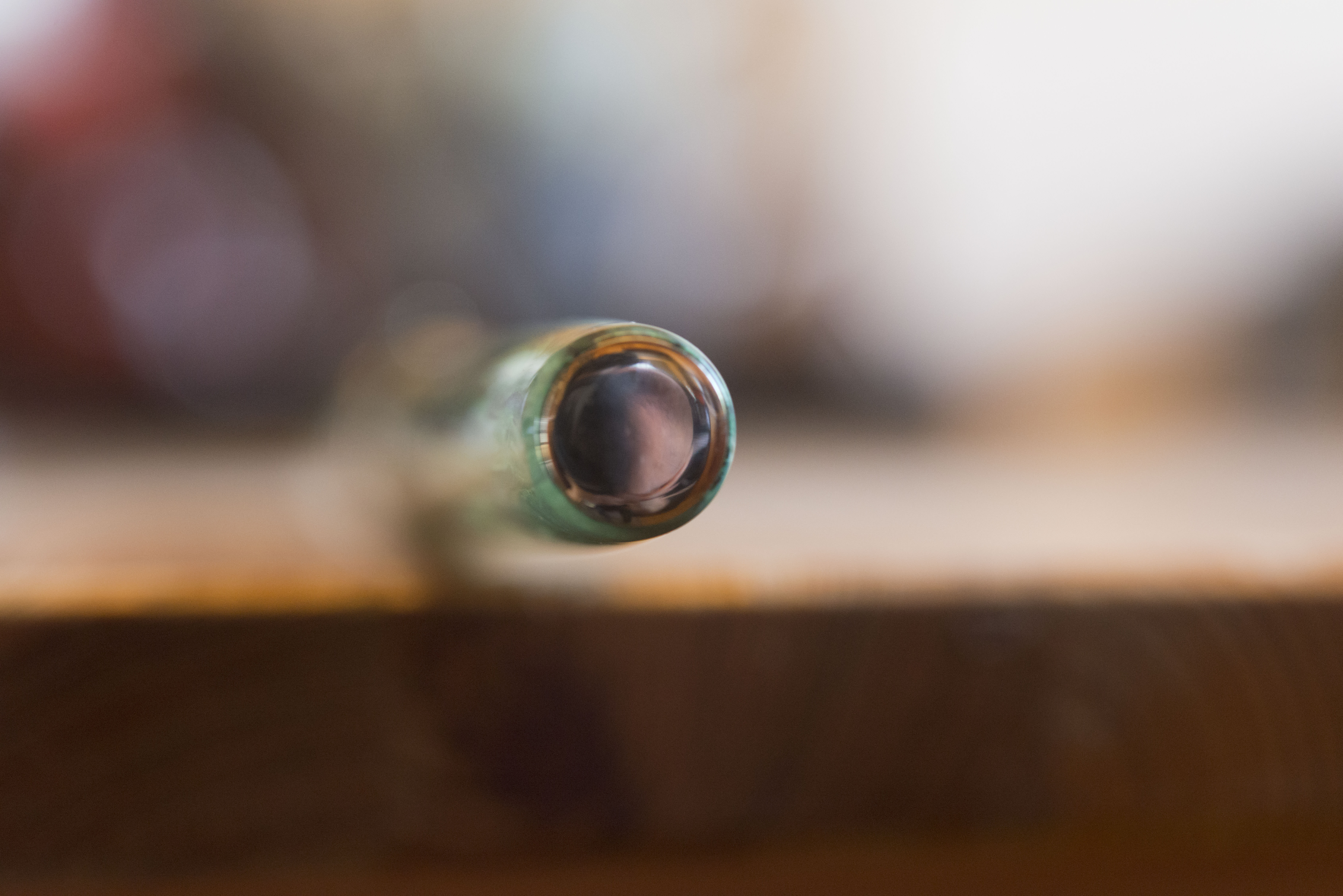 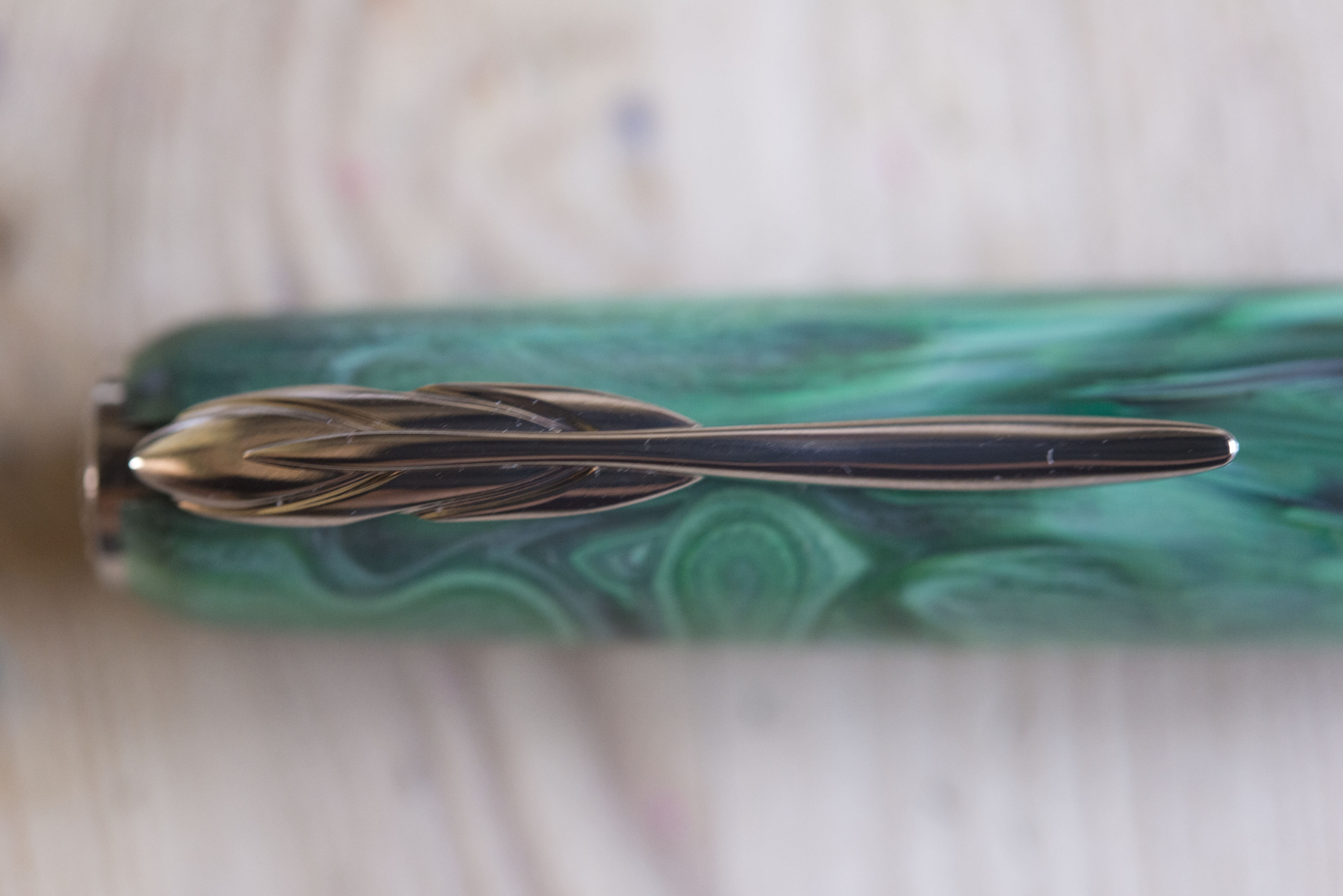 Round the cap there is a wide textured band.  On the front (clip side) it simply says Pineider.  On the reverse, in two lines, it has the old type writer test of “The quick brown fox jumps over the lazy dog”, almost certainly a reference to its frequent use in pen reviews.  To me this is trite, and I know others who are also not impressed.  Still it could be argued it adds character.  The bottom (also a finial?) is a simple disk. 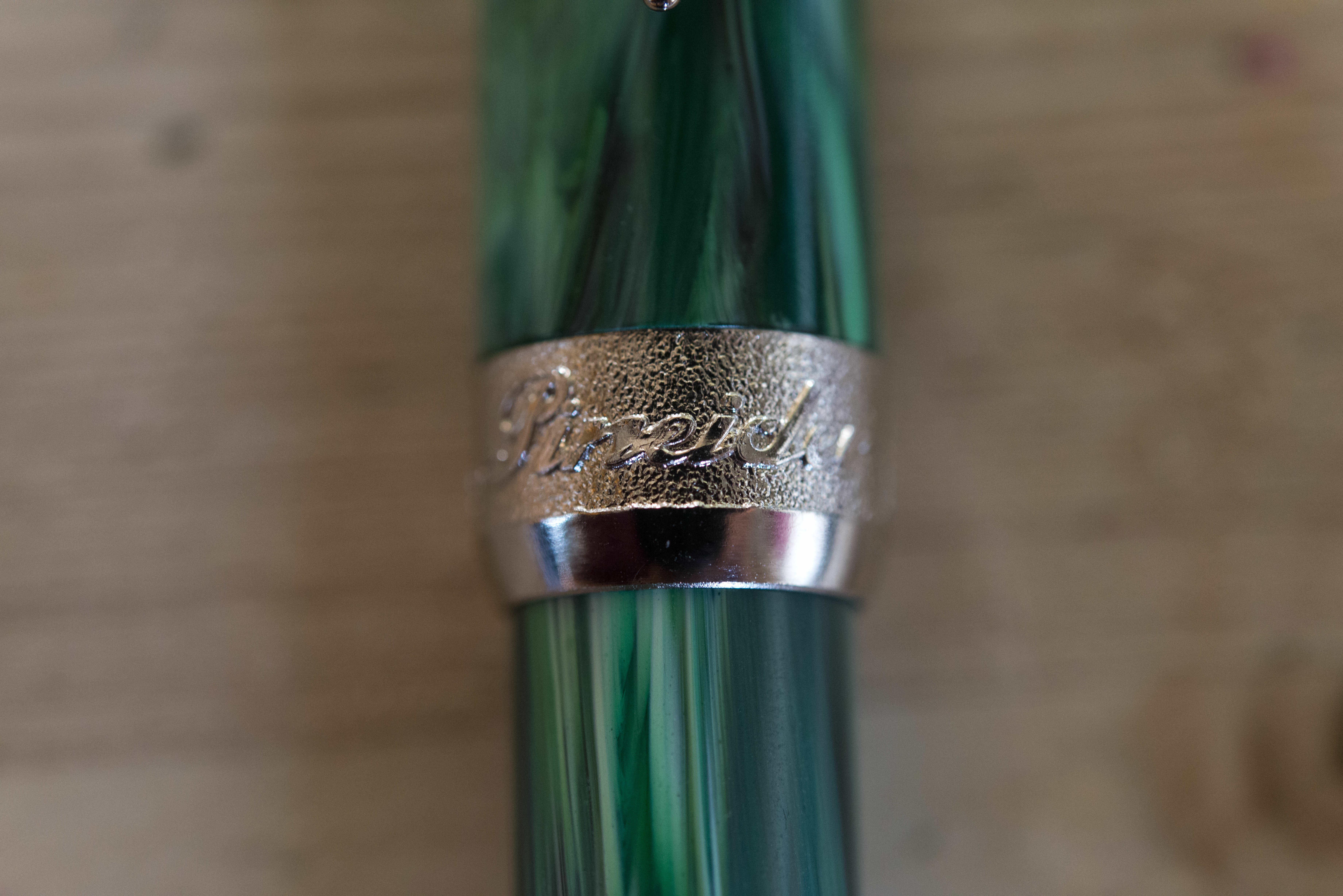 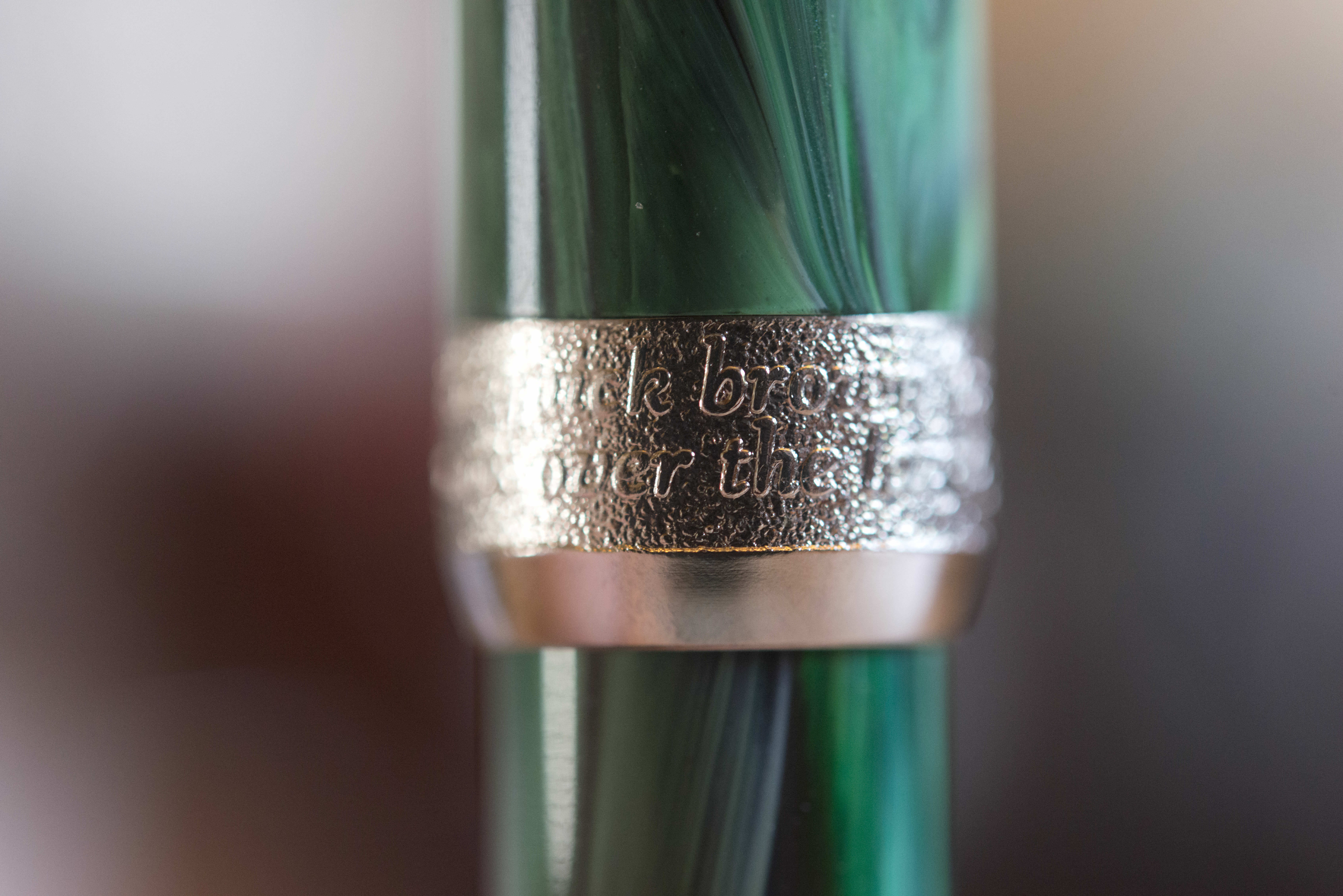 The cap pulls off and is held on by a magnet.  The trick with this one is the cap will rotate to one of two or three positions when being placed on the pen.  It is a neat trick, but the magnet does not feel that strong, another reason why I would not put it in a jacket pocket, and if like me you consider the clip to be on the top, when you open the pen it is either sideways else the nib is underneath, meaning you then have to rotate the pen in your hand.  Personally I consider this to be poor design and little more than a gimmick which will fail over time as the magnet weakens.

With the cap off you see a metal section in a shape like a castle keep (others have called it an egg timer or hour glass).  The nib side is smaller and textured, almost giving the impressions of crenellations on a rook chess piece.  From the barrel to the nib, the section tapers in by about 30 degrees, and then out again at a more extreme rate.  I actually found the pen very comfortable to hold and in no way slippery.  I know others who do consider it to be uncomfortable, so this is a pen you need to ideally need to try before buying, but then I would say the same for any pen where you have to consider the cost. 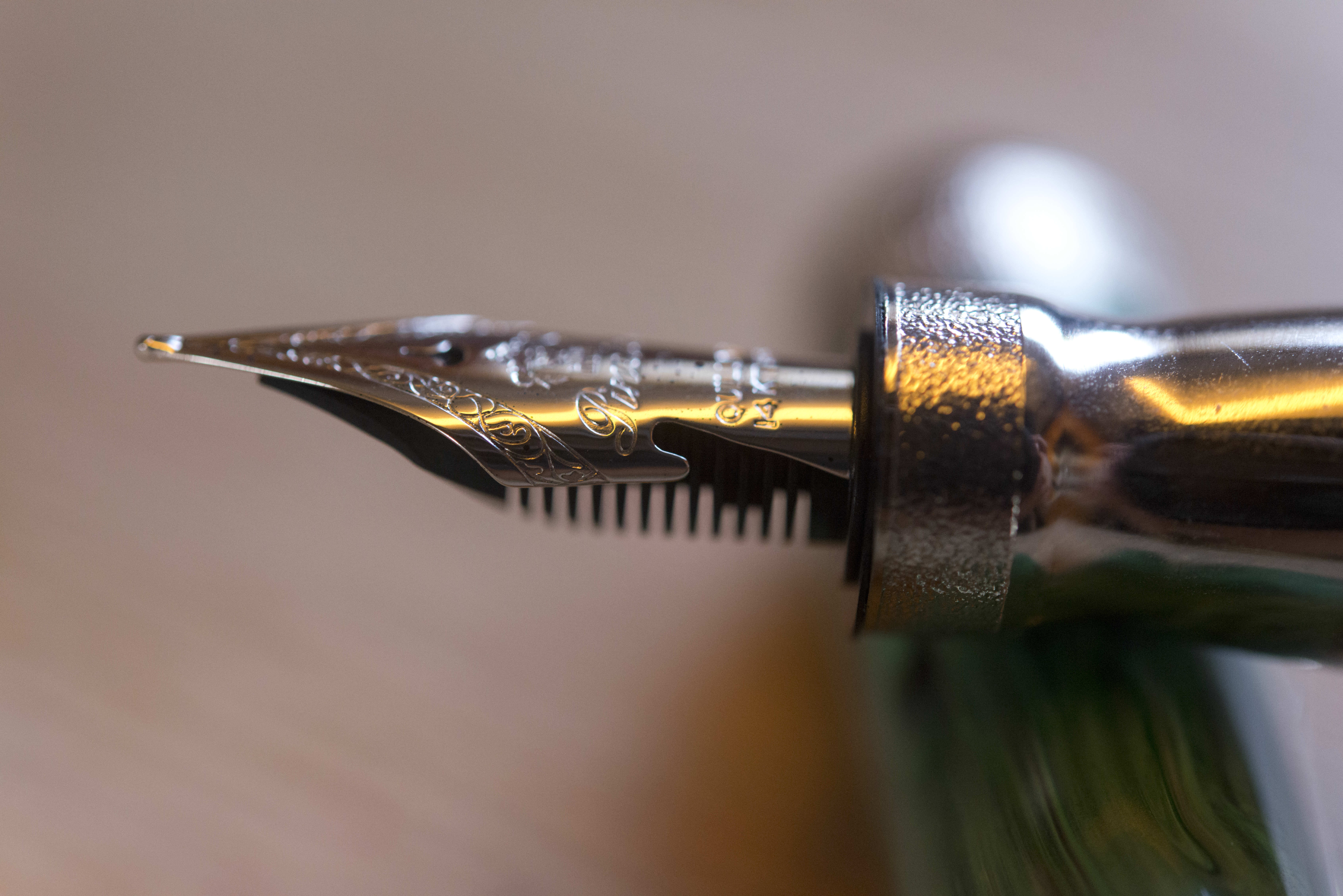 The cap will post.  It locks magnetically, though it does not feel secure as the cap will rotate round.  It should not fall off, but in my hands the cap meets the crook of my hand and that does knock the cap backwards.  Personally I normally do not post and the pen is long enough so it is not an issue.  Posted the cap adds about an inch to the length of the pen but adds noticeable weight at the back. 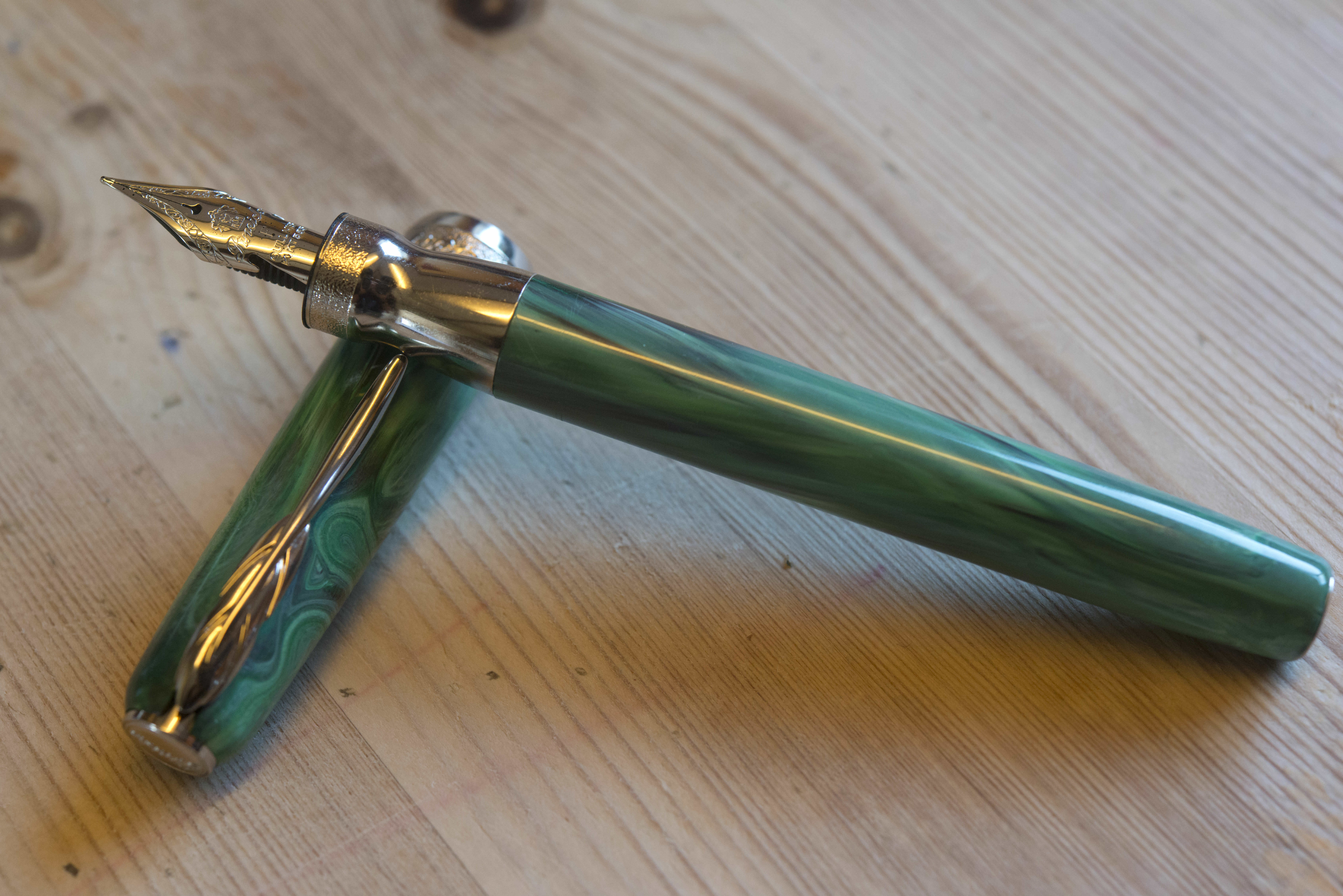 The quill nib has two cut outs in it to help with flex.  Pineider say this is a soft nib with some flex, though they also refer to ‘hyperflex’.  It does offer variation, but I would not consider it to be a ‘semi-flex’ like some other manufacturers provide, however it is nice and soft and springy.  If you like Graf von Faber Castell, OMAS, or Visconti gold/palladium nibs, the you will like this one, however if you prefer the more pencil like nature of Pelikan, Montblanc or Sailor then you should try this pen before buying as it may be too soft for your preferences.  I’m not convinced the cut outs are any more than cosmetic, having watched sideways on as I use the pen, however they do look good.  Of course the nib is the heart of the pen and when I tried mine it murmured.  My initial writing experience was very good, however as soon as I tried some flex the ink flow stopped and refused to restart without priming the nib through the converter.  I tried again, same results.  Looking at the nib and feed I found the feed was not lined up properly.  Despite Pineider saying every pen is tested before being released, this never went through proper QA checks.  Fortunately I was able to rotate the feed about 15 degrees without breaking anything and now the ink flows well.  Writing now I get a wet line, though still as a European fine, but I can now also try flexing (no examples here as my flex writing is bad) without any problems.  For me it is a very nice writer.  The flex you can get gives the impression the nib could take some punishment without springing, though write too fast and it does skip and rail road. 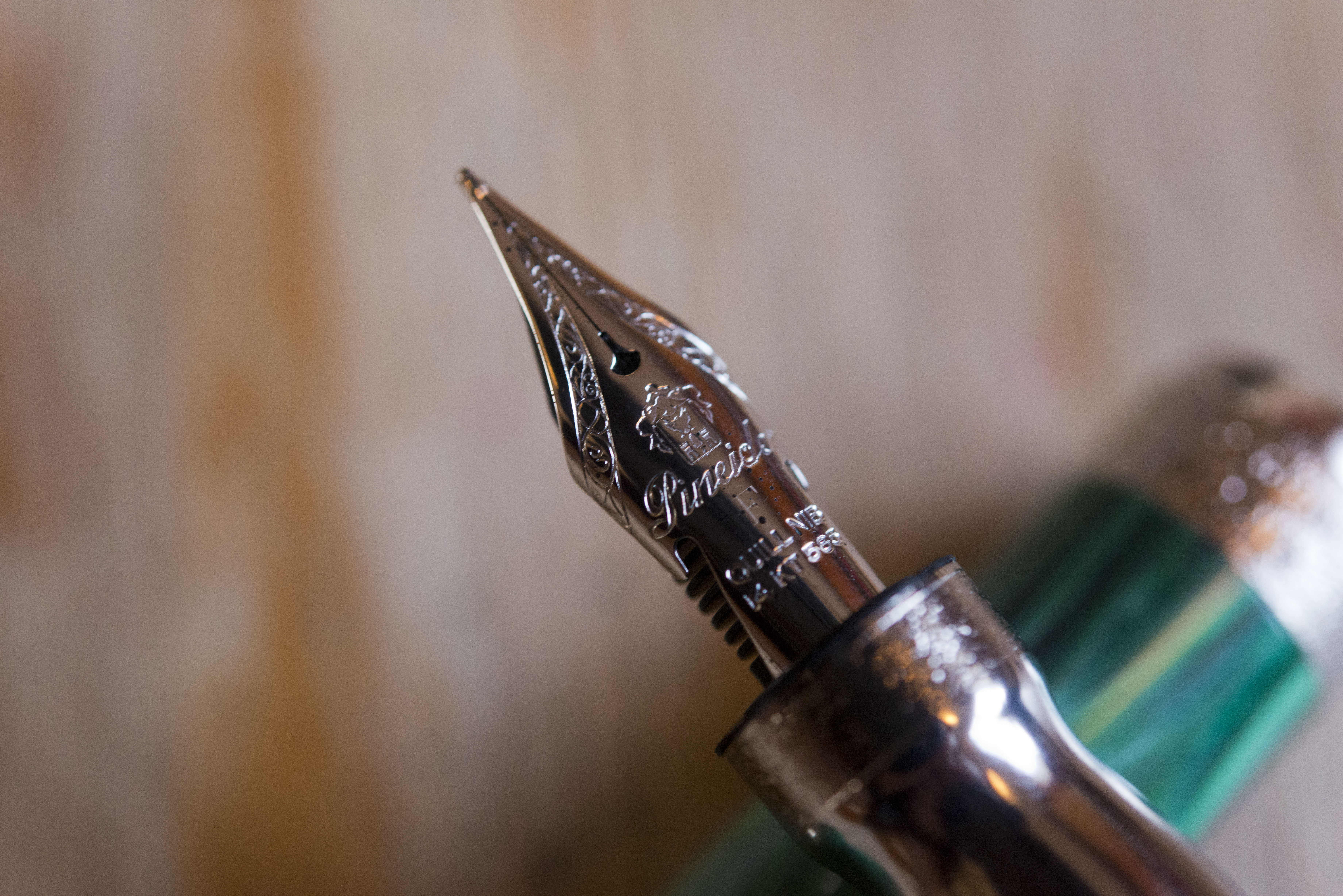 The filling system is the ubiquitous international standard system, so short and long cartridges and readily available converters.  The pen comes with a branded converter, which sits firmly and securely in the section of the pen.  I have no problems with this as it is a simple system and makes pen cleaning and maintenance a lot easier. 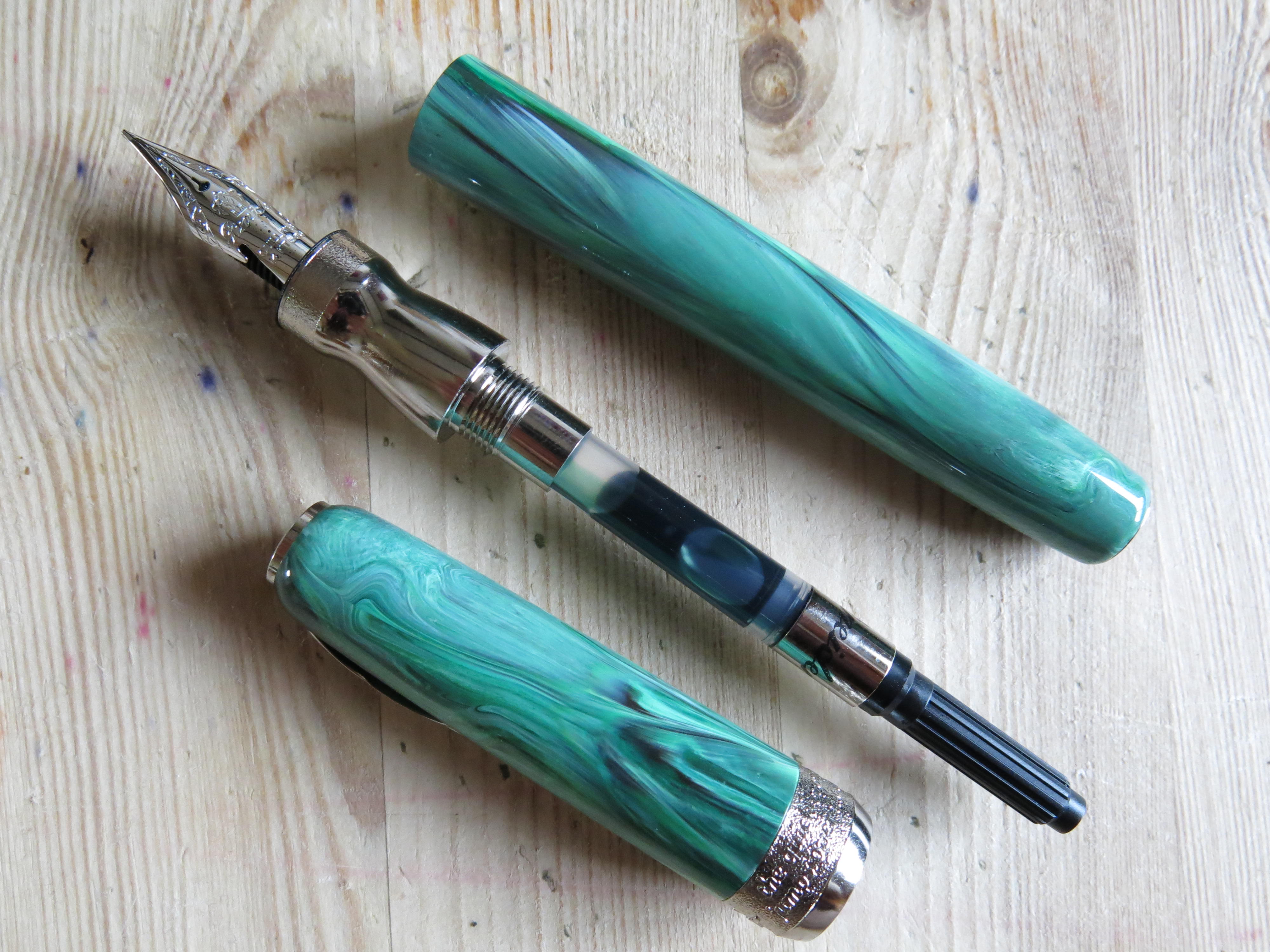 The pen was not available from any of the UK pen retailers (though could be bought at Harrods), however it is available from European stores for €400 and from the US for $400.  To me this is a lot of money.  The Avatar is priced at €150 in Europe, which feels a decent price, though in the US appears to be almost twice that.  I personally would consider the La Grande Bellezza to be worth around £250, maybe £300 at a max, certainly not more.

It might sound like I consider this a bad pen, but that would not be the case.  The negatives to me are:

However, the positives are:

And that really is the key thing.  I enjoy writing with this pen and I am happy to grab it from my collection.  Sure I can’t put it in a pocket but that is not an issue as I actually tend to carry my pens in a pen or pencil case so this is not an issue.  Usual caveats that you should try writing with this pen before buying as the grip section is not for all the nib will not suit everybody.

Please note this pen was bought with my own money, taking advantage of both a great sale price, along with a number of us buying together to split P&P and customs charges. 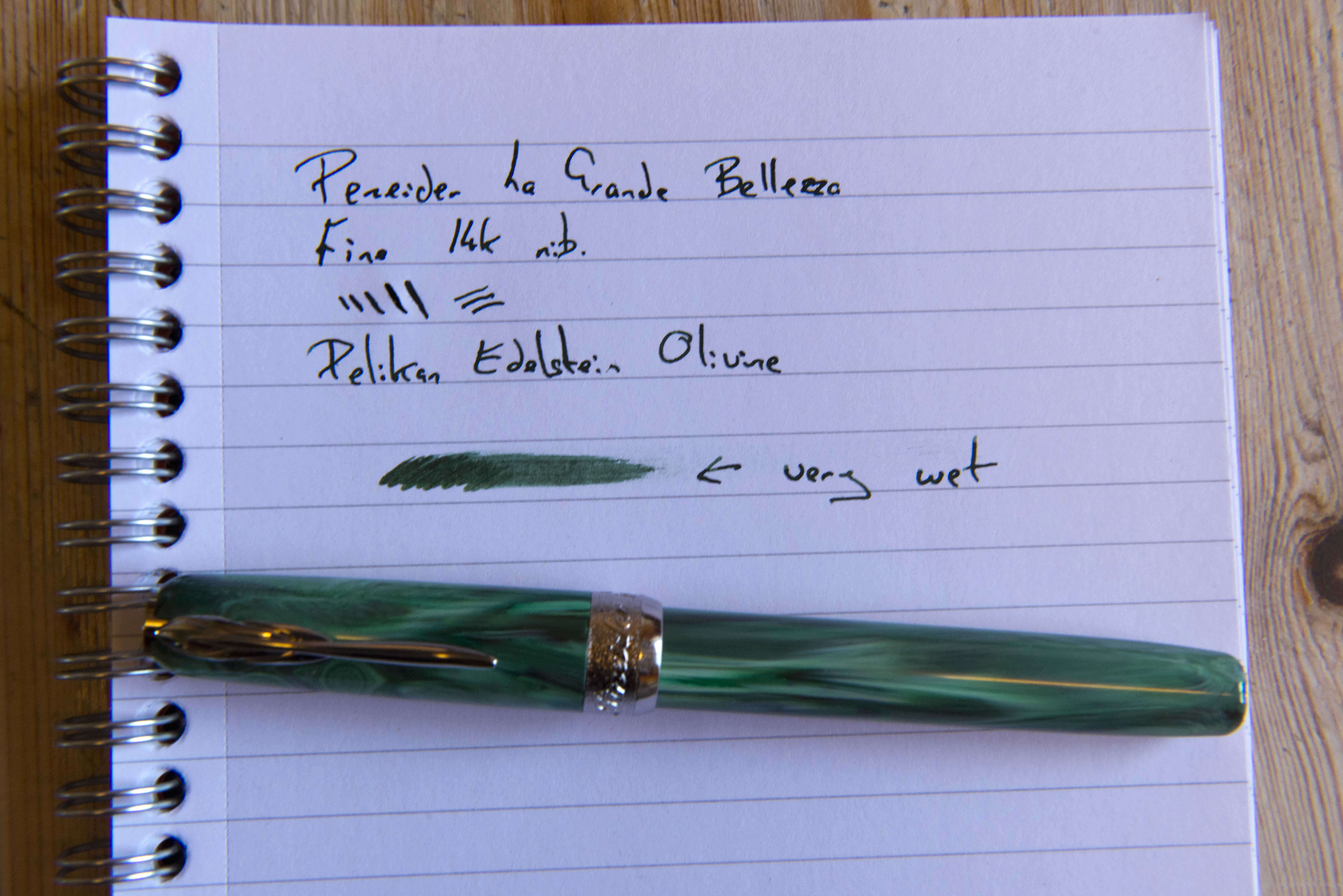