Before I start, there is one thing I need to cover about SCRIBO.  While the company came about due to the closing down of OMAS, with many of the staff coming from OMAS, and the nibs being the same ones produced by Bock for OMAS, they are Scrittura Bolognese or SCRIBO, not OMAS.

So far we’ve seen just two high end ‘collector’ pens from SCRIBO, the Pittura and the Letteratura, and three limited edition tie in pens for the Shrewsbury, UK based shop, Write Here.  Many have been waiting for first regular pens to be launched.  In November the Feel will become available, and I was lucky enough, along with other attendees at this year’s London Writing Equipment Show, to be able to look at and handle the new pens at the Write Here table.

Having seen the online teaser shots I already knew the pen was not traditionally shaped, as in cigar, tapered or straight, and while the pictures of the light grey pen showed facets, it’s not going to be confused with a Paragon.  It is curvy, the barrel has a bulge, potentially for comfort (as I’ll cover later), the cap bulges out to the same width, but being shorter, looks slightly more bulbous, and even the piston turning nob has curves, though to a far lesser extent.  To me it provides a slightly feminine appearance in a 1920s poster way and to me is appealing, however, while at the Write Here table I did hear mixed comments, so it’s certainly not to everyone’s taste, but to me that’s a good thing.  The pen is also facetted, down its entire length, not just the barrel, cap and turning nob.  On the pictures, and in lower lighting it’s very hard to see on the grip section, but you can feel it, and in a good way.  I’d suggest the design is modern, but with 1920s/30s design influences in a way that only the French and Italians seem to be able to pull off. 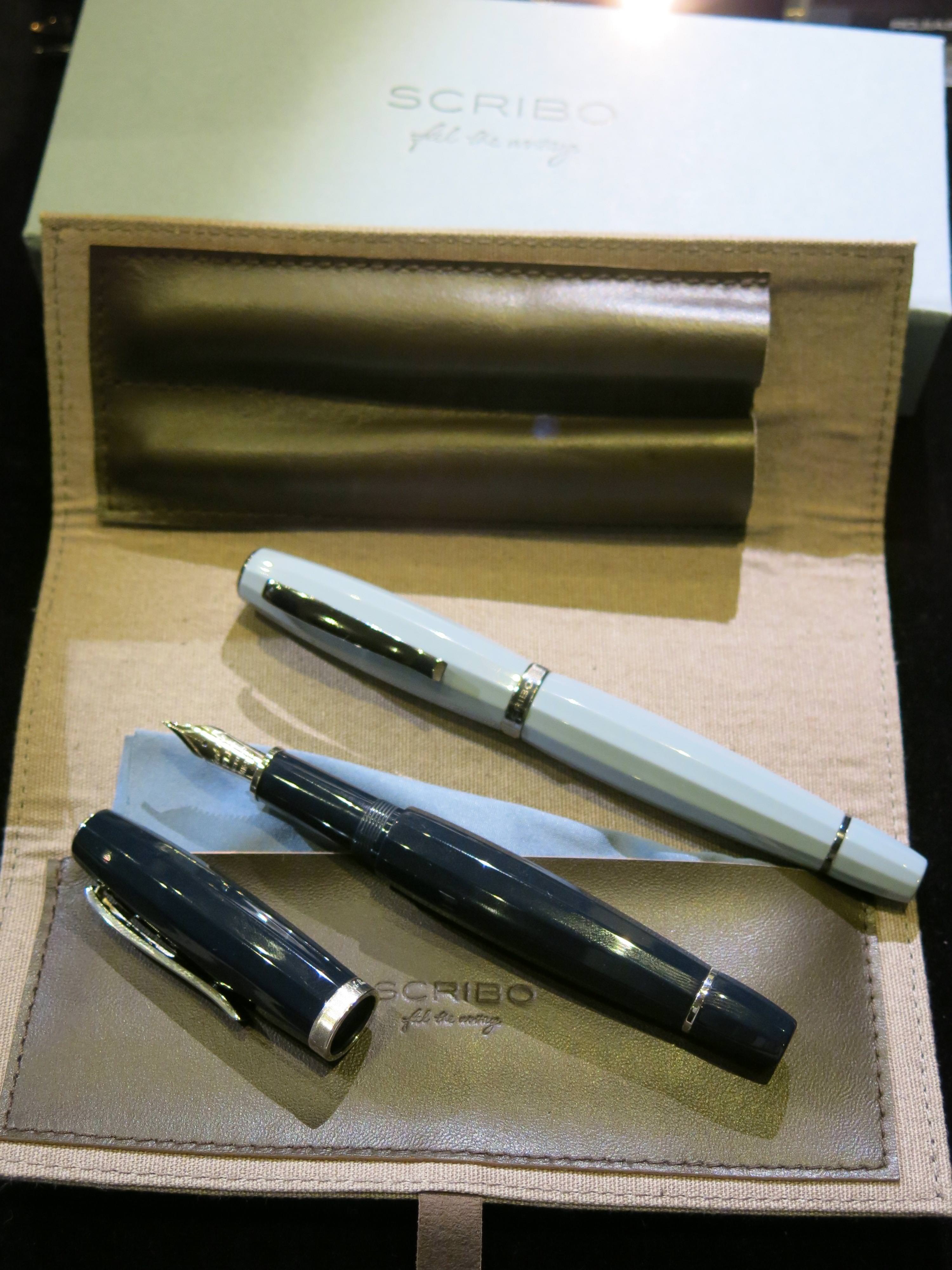 Uncapping the pen and you see a step down from the barrel to the section.  This did concern me, however with the section being long, I find the step sits in the gap before the crook of my hand (I use a classic tripod grip) and so is not an issue.  Small hands, or holding this pen further back, and it may be an issue.  I always recommend trying a pen before buying to make sure it’s comfortable, and with the Feel this certainly will be the case.  The step is curved inwards to minimise any uncomfortable pressure on the hand, however holding the pen towards the back of the section I could notice the transition.  The threads, as expected from a high end pen, are smooth and barely noticeable.  One thing I did not see either when looking at the pen, or from my photos, though someone else did comment about it on an Instagram post of mine, is that unposted the barrel can look rather fat and the nib a little small in comparison.  I’m not so sure and again it’s down to personal tastes.  Remember the nib size is mainly dependant on the space for the collar and dictated as much by the design of the grip.  The nib is the same as on the Write Here shop exclusives and, as can be seen from the pictures, very similar to the ones used on the OMAS Ogiva ALBA and 360 Vintage (which I used for comparison). 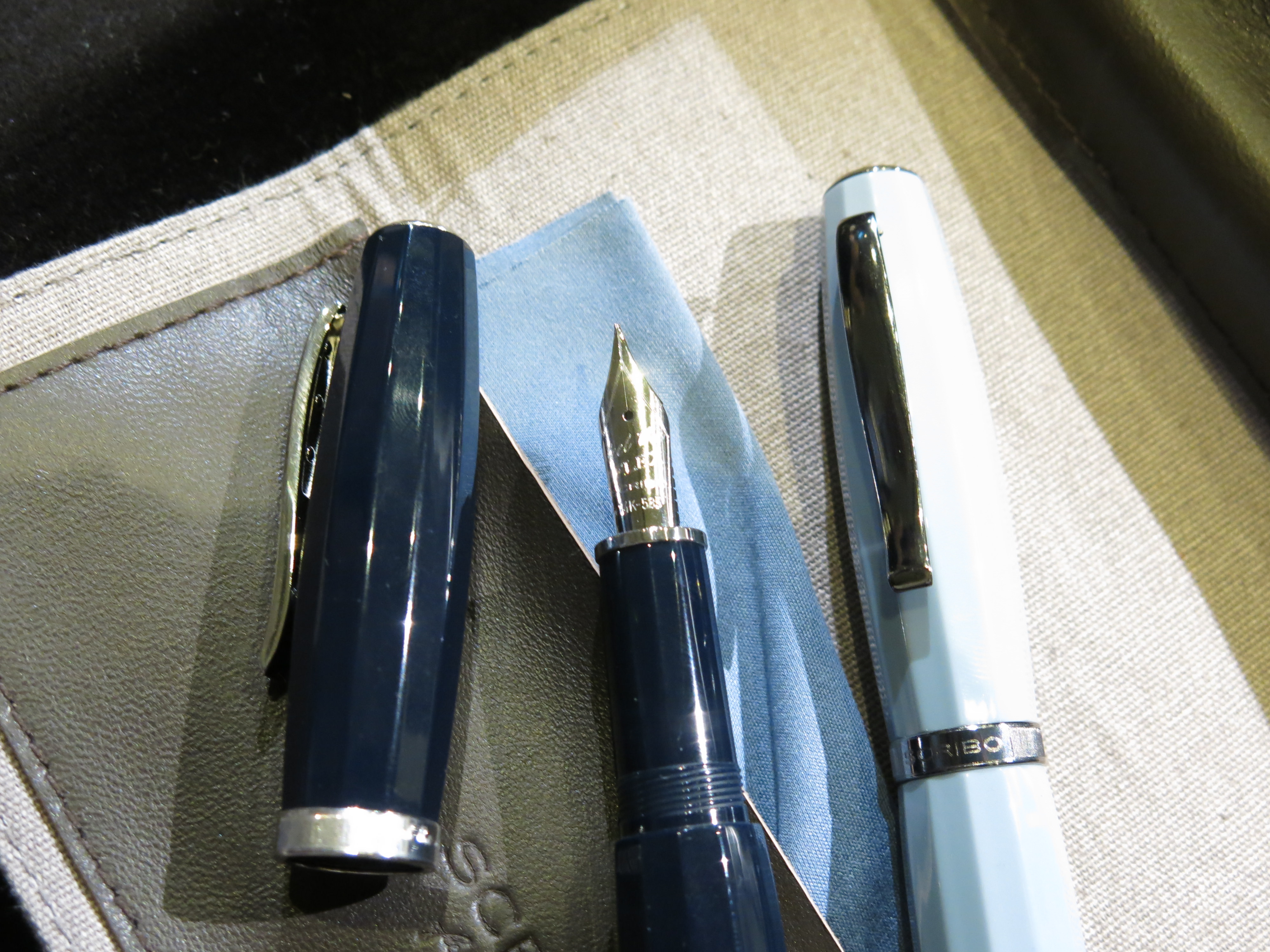 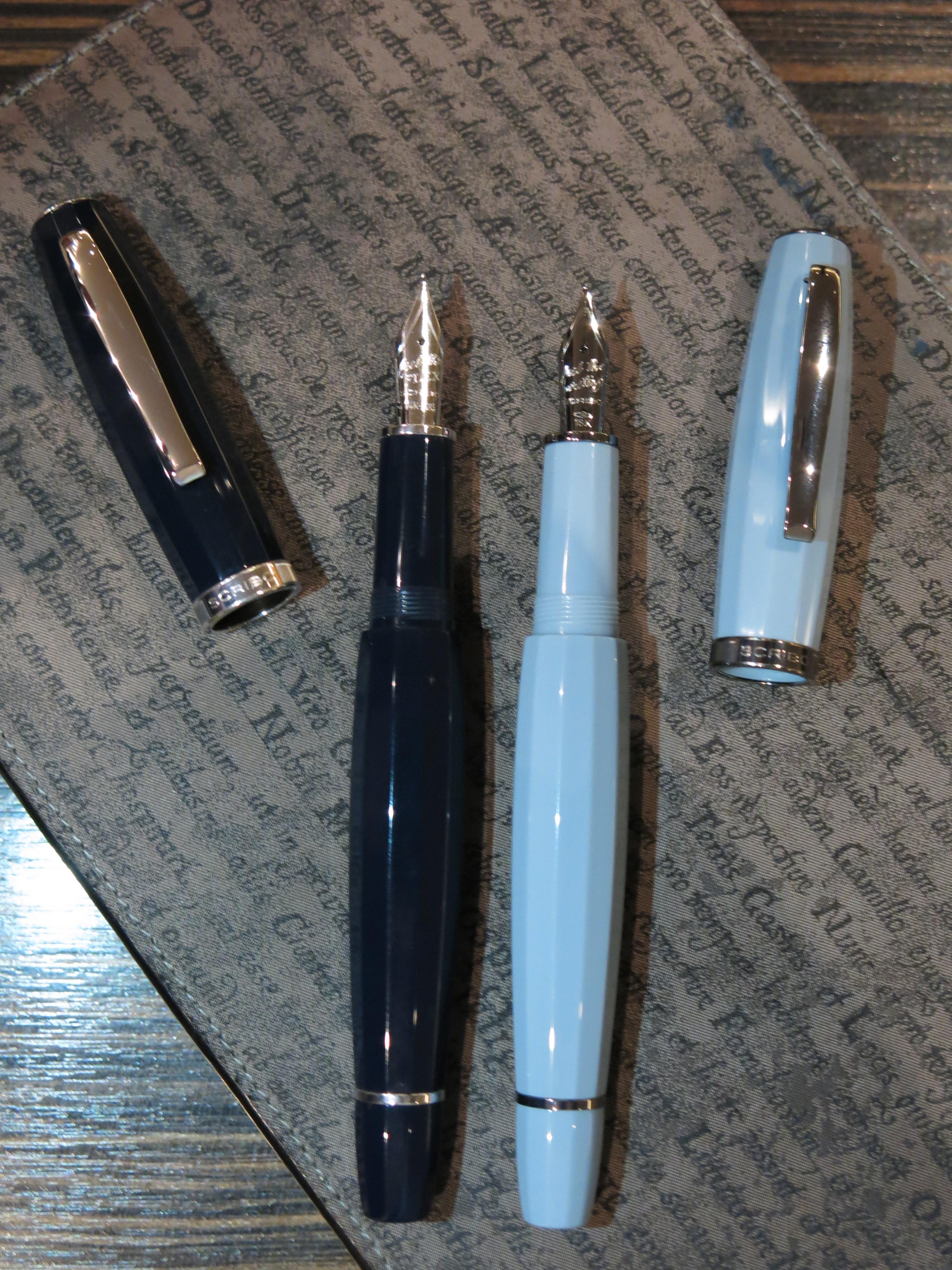 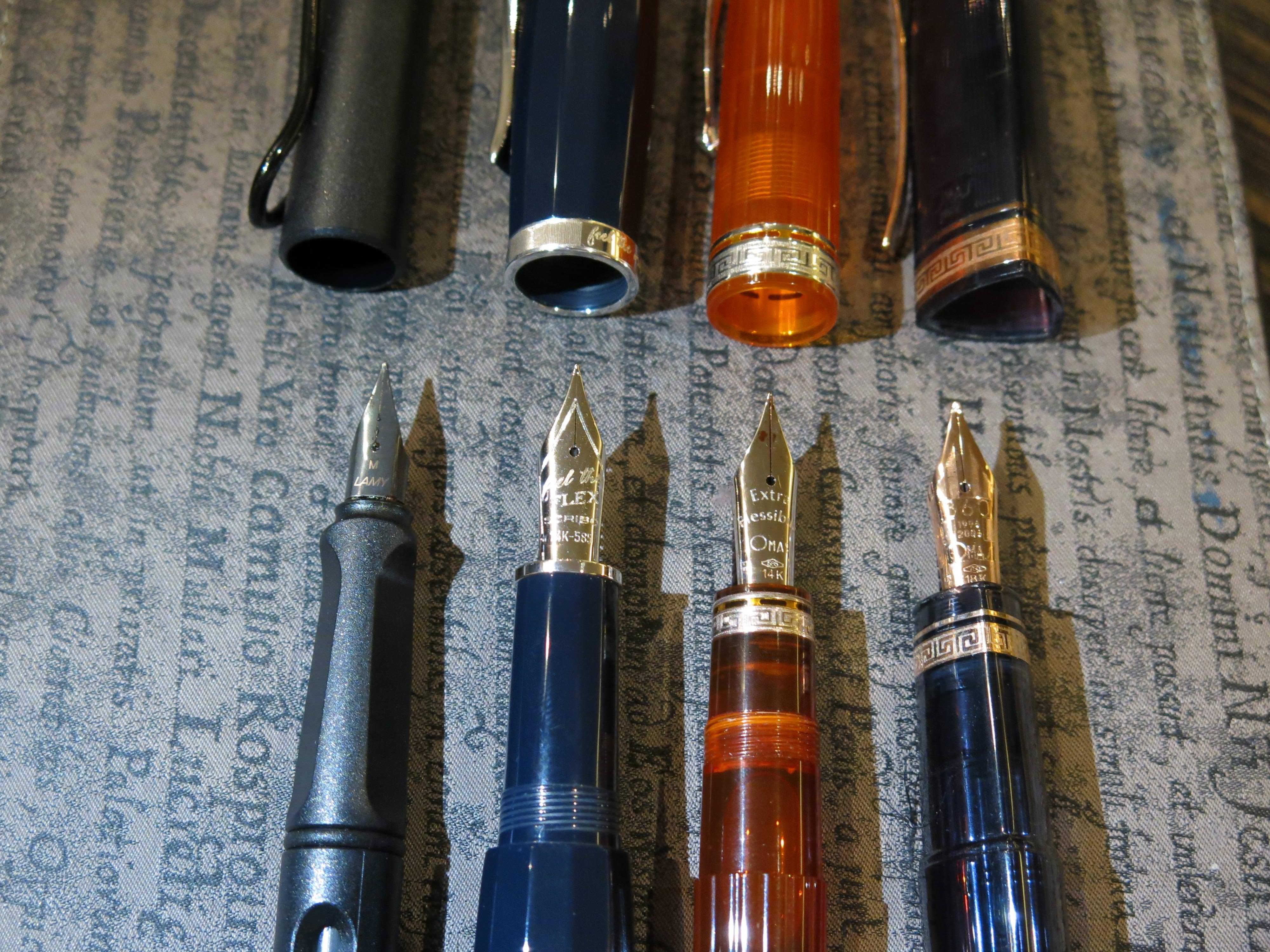 The nib itself is made by Bock, and is the same ones formerly made for OMAS.  It will be available in both 18k regular nibs and 14k Extra Flexible.  I can attest from my Write Here, plus other Write Here editions I’ve tried, that these nibs are soft and springy and with your eyes closed do write like an OMAS (yes I know they are SCRIBO, not OMAS).  I have the 14k fine in my Write Here v1 and it feels very similar to the 14k EF Extra Flessibile on my OMAS Ogiva ALBA.  The feed is ebonite.

The comfort factor of a pen is even more down to the personal tastes of the individual than the softness/firmness of the nib.  First this pen in the hand is very well balanced.  It will not post and speaking to Luca he mentioned that attention was paid to the weight and centre of balance.  It’s not a light pen, but at the same time not heavy.  The curvaceous barrel makes the pen very comfortable to hold.  The facets are thin enough that you do not notice them in the crook of your hand.  The facets on the grip/section also are not noticeable unless you concentrate, however when you do they work (with my tripod grip) and actually makes the pen feel more secure if your fingers are greasy or damp (say from high hotel AC at a busy pen show).  I rotate my pens slightly anti-clockwise and the pen was still very comfortable for me.  Of note I tend to prefer fatter pens.

For me there is a slight elephant in the room and I did raise this with Luca from SCRIBO.  The cost.  At launch it will be €650.  This is Montblanc 146/149 range and I know people will say there’s a lot of direct rival pens that could be got for less than that, however as Luca pointed out to me this is the same cost region as the OMAS Paragon would have been, and the pens are hand made with piston filler, gold nib, and ebonite feed.  My concern is some people felt the Write Here pens at £450/€515 were expensive (I did not), and with Aurora and lower end Visconti piston/power fillers being around the €450/€550 mark the initial price could be a problem.

Material wise, anyone expecting the pens to be made of old OMAS rod stock can give up.  The old OMAS holding company sold off all their celluloid rods to ASC and most their acrylics to The Turners Workshop before closing the doors.  Additionally the by-products of making celluloid mean that it’s no longer made in Europe (and I read else where there may now just be one factory in China making it) so any thoughts of the fantastic celluloids of old being available are nonstarters and the likes of Leonardo are just using up old stock.  Cost wise though, the actual barrel material should not make a big difference unless the material becomes exotic (sterling silver, platinum, multi-year cured).

Initially the pen will be available in two colours.  A dark blue, chosen as it’s a conservative respectable colour for those wanting to bring the pen out at business meetings or more formal functions, and the light blue/grey of the SCRIBO corporate colours.  I like both, the lighter pen showing off the facets far better.  The material feels solid and of quality.  It feels stronger than the old cotton resins OMAS used in the more recent and demonstrator pens.  Hopefully in time more options will become available and I’d personally like to see some materials with a decent level of chatoyance, such as those used in the Write Here exclusives.

Packaging is interesting, and could be argued adds to the cost, but in a good way.  Rather than a large fancy box with padding, the outer box is a simple cardboard affair and the pen comes in a protective two pen wrap.  This feels like a stiffened canvas (can’t remember what Luca said it was made of) with a two pen leather pocket on one side and a slim leather pocket on the other (containing a cleaning cloth, but could be used for business cards or small note papers).  The wrap is fastened by a long leather thong which wraps around.  It is a quality product that will protect the pen (or pens) and can be thrown in to a bag quite happily.  I’d actually like to see this sold separately in time. 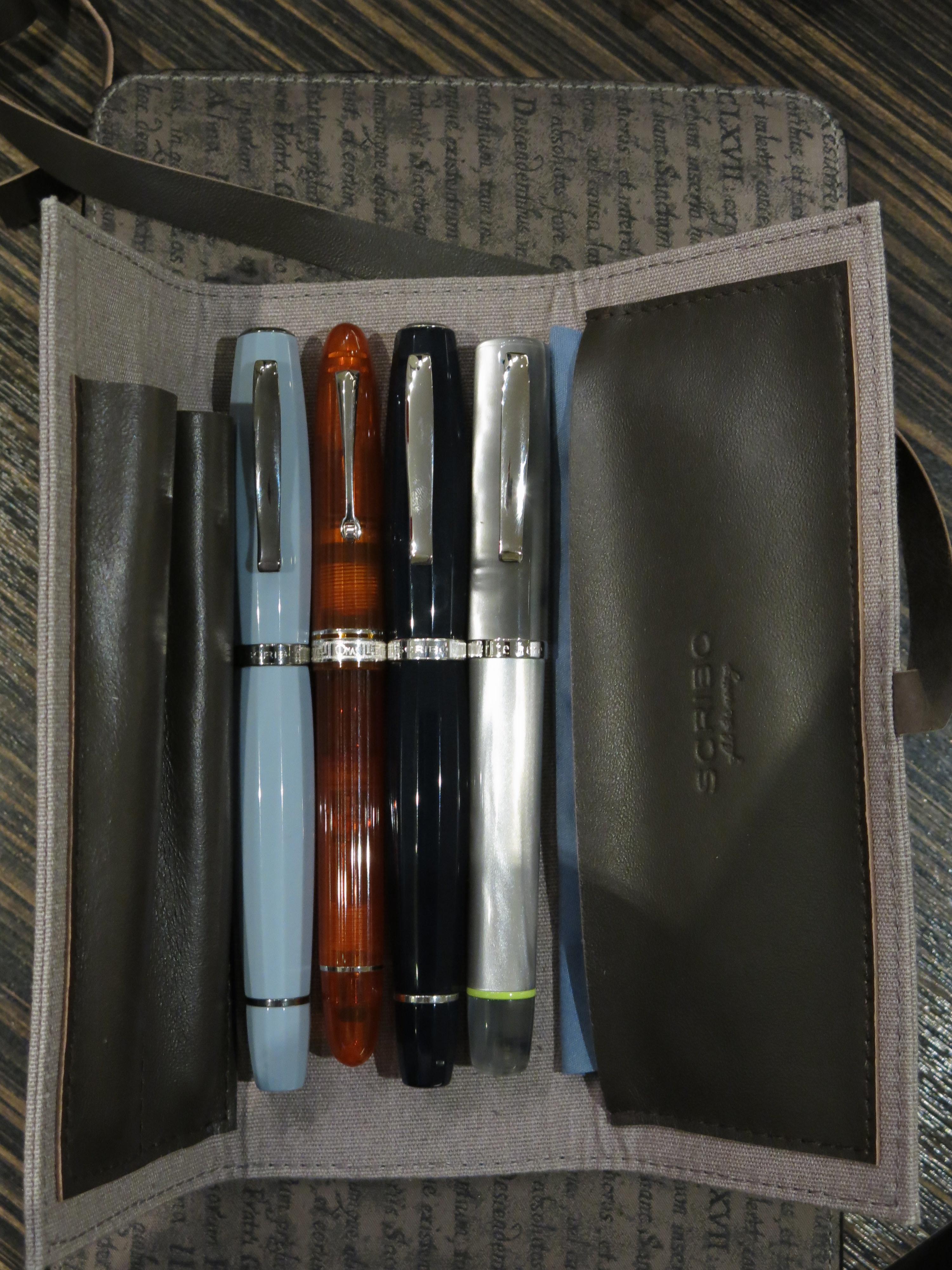 Of course the question is would I buy one.  A couple of years back I’d never consider spending close to £500 on a pen, certainly not £570 (at today’s exchange rate), however once my wallet has recovered from the pen show I can see me getting the light blue one.