There seems to be three ways of discovering Ryan Krusac and his pens.  Be at a US pen show he’s attending, from a fountain pen blog/vblog, or from social media, with the results that in Europe he is little known even amongst long term fountain pen enthusiasts.  My introduction was through the videos of Mike ‘Inkdependence’ Matteson and David ‘Figboot’ Parker.

For those to whom Ryan is new, he is a wood turner who moved to making fountain pens a while back, originally using kits, then around a decade ago shifting to making all bar the nib unit and converter.  His Legend range is probably the model most of us are more familiar with, where the bodies and caps are turned out of specific wood types, each block carefully sourced and checked by Ryan in advance, with the section and threads made out of ebonite (I believe).  There are variations with semi precious stone disks placed in the cap and barrel finials, plus at a higher price, with art work, inserts and overlays on the barrel.

For the 2017 International Fountain Pen Day Ryan teamed up with Rickshaw Bags to produce a limited edition pen, which would come with one of the latter’s one pen sleeves, and more importantly would also donate $175 for each pen sold to Shawn Newton’s Newton Pens Scholarship, which helps fund US students going to college who otherwise would not have been able to afford it.  OK not a UK based or affecting charity (which I normally limit my donations to), but still a worthy cause.  The pen is made out of Gaboon Ebony with an ebonite grip section and is available in L12, 14, 16, and 18 sizes.  The number being the barrel diameter. 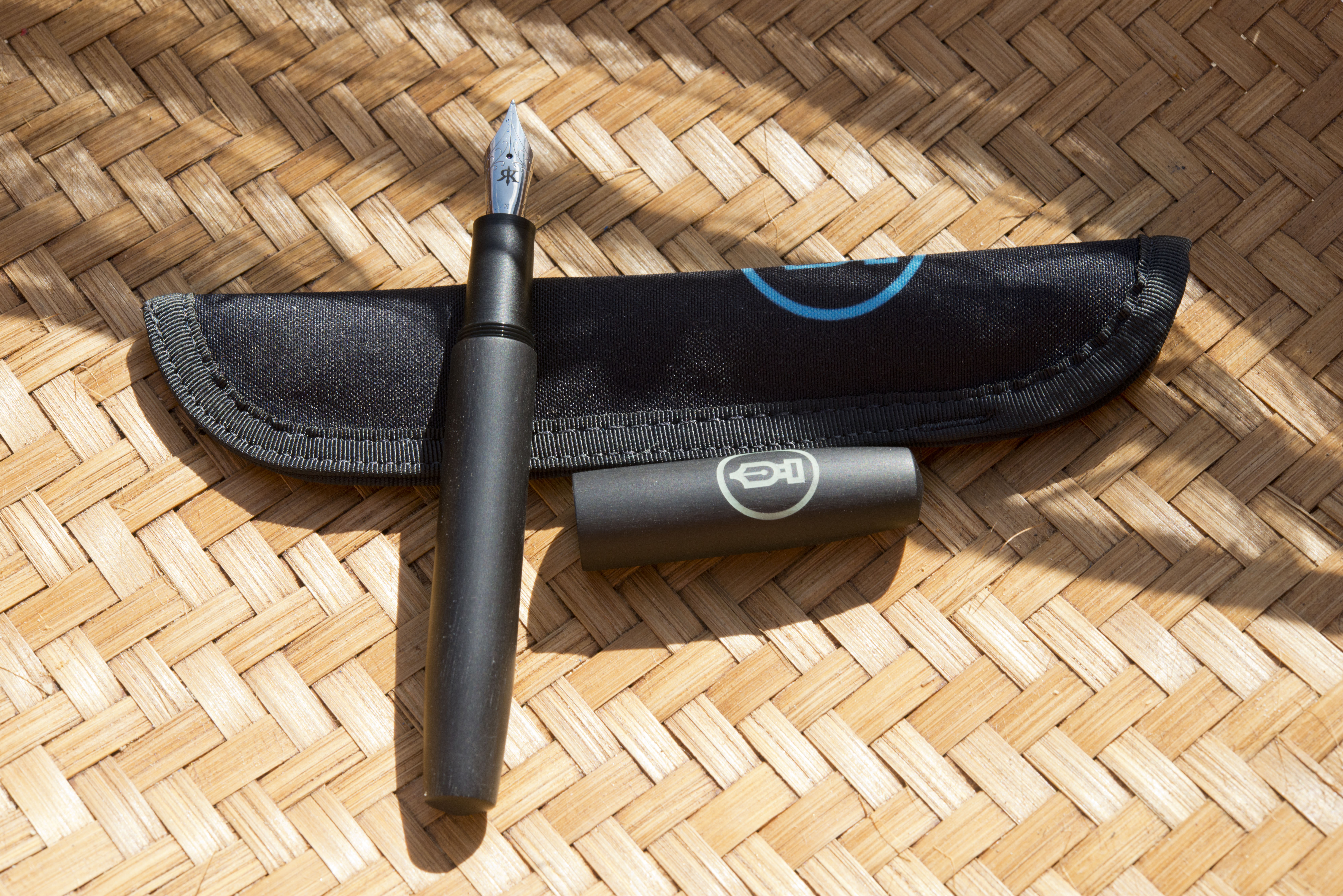 Having mentally committed myself to buying a Ryan Krusac pen I dithered around, looking at videos of the L14, L15 and L16 pens Ryan had in stock (thanks for these Ryan – also shows how helpful he can be) I just could not make up my mind and so decided to go above my price limit and go for the Scholarship Pen.  I do like the look and feel of ebony, in fact there is something very pleasurable and tactile about wooden pens, as well as the warmth they provide.

The pen arrived in a Rickshaw Bags Fountain Pen Day 2017 single pen sleeve and had a converter already installed in it.  There is an option for a display/presentation box, but I did not go for this. 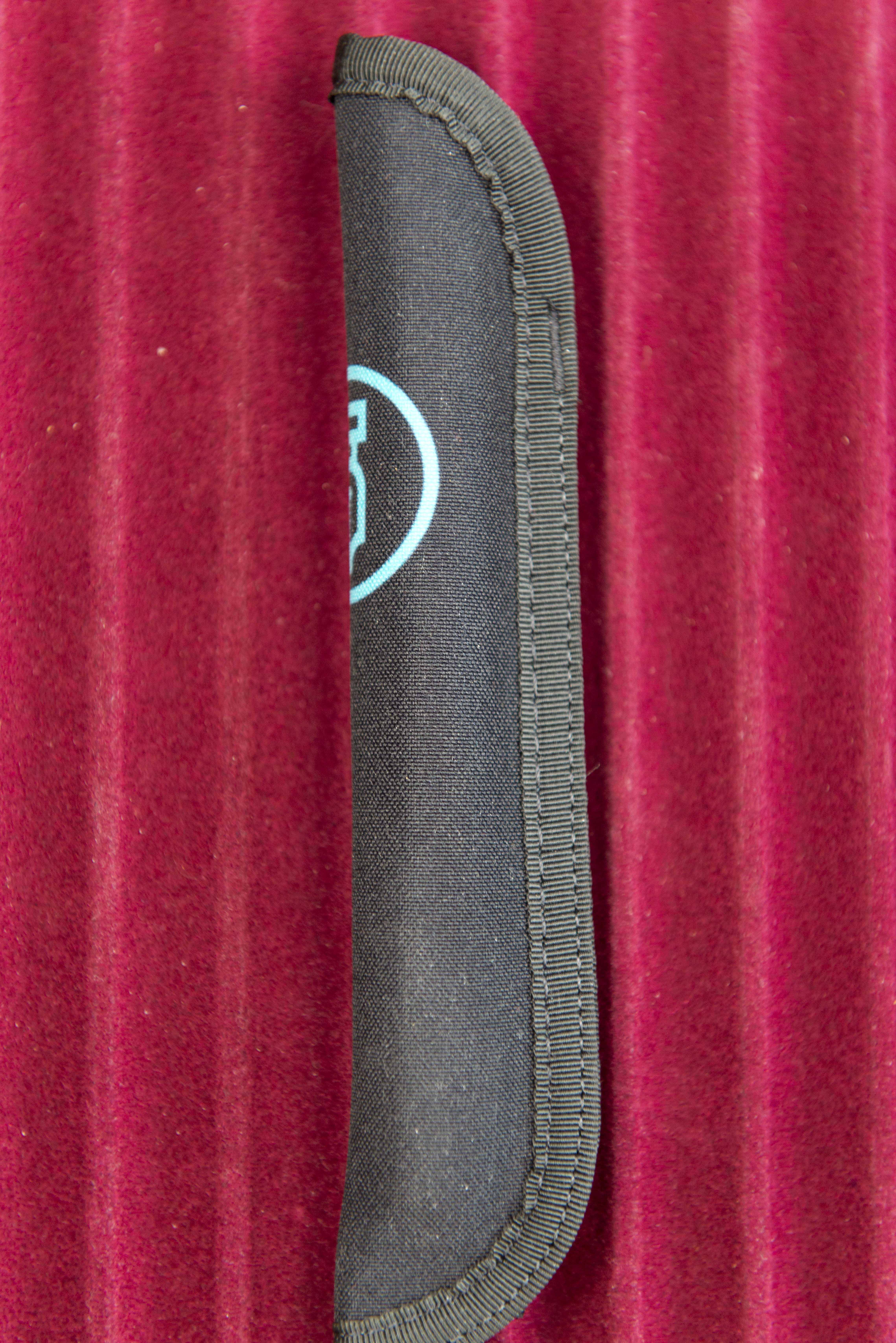 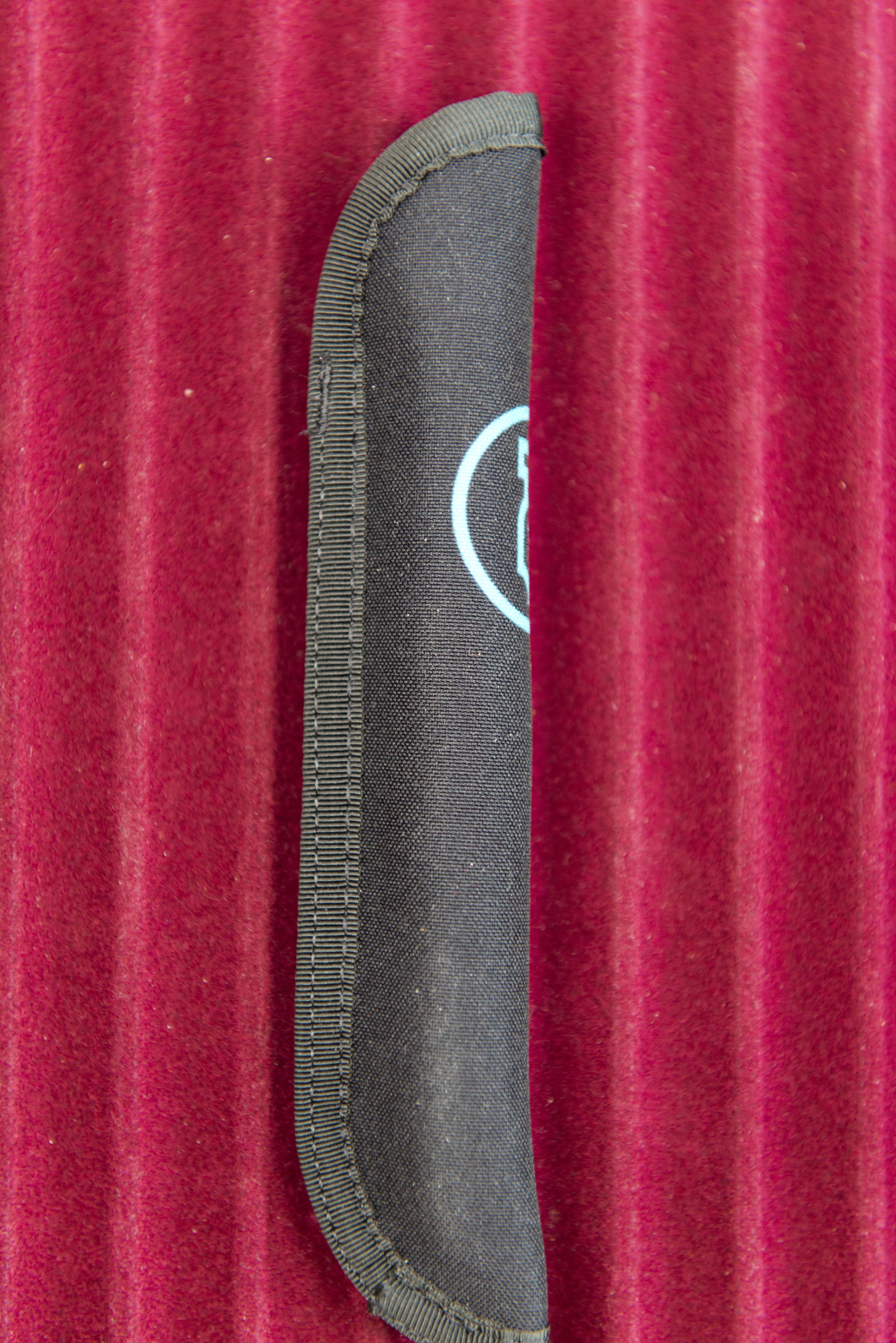 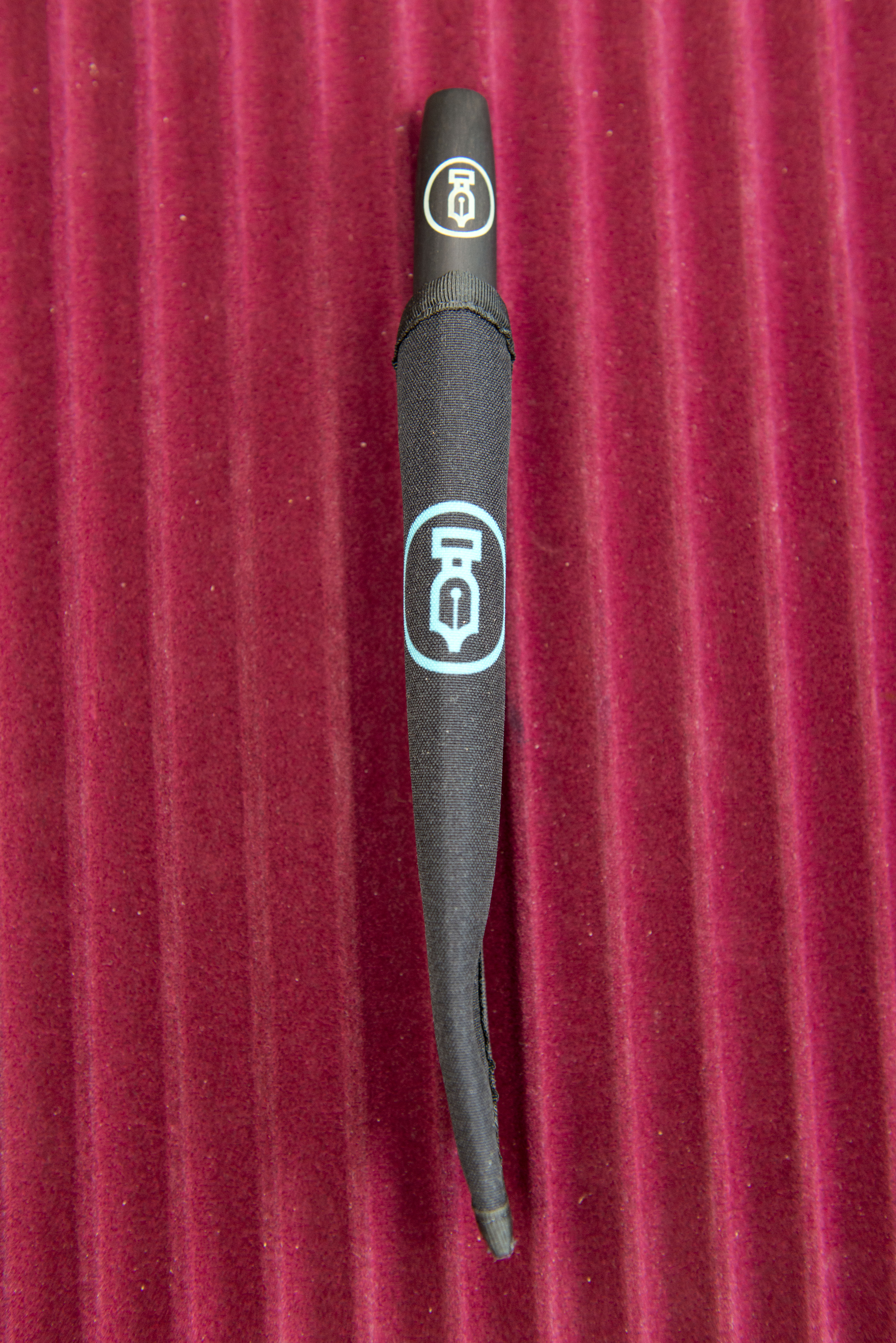 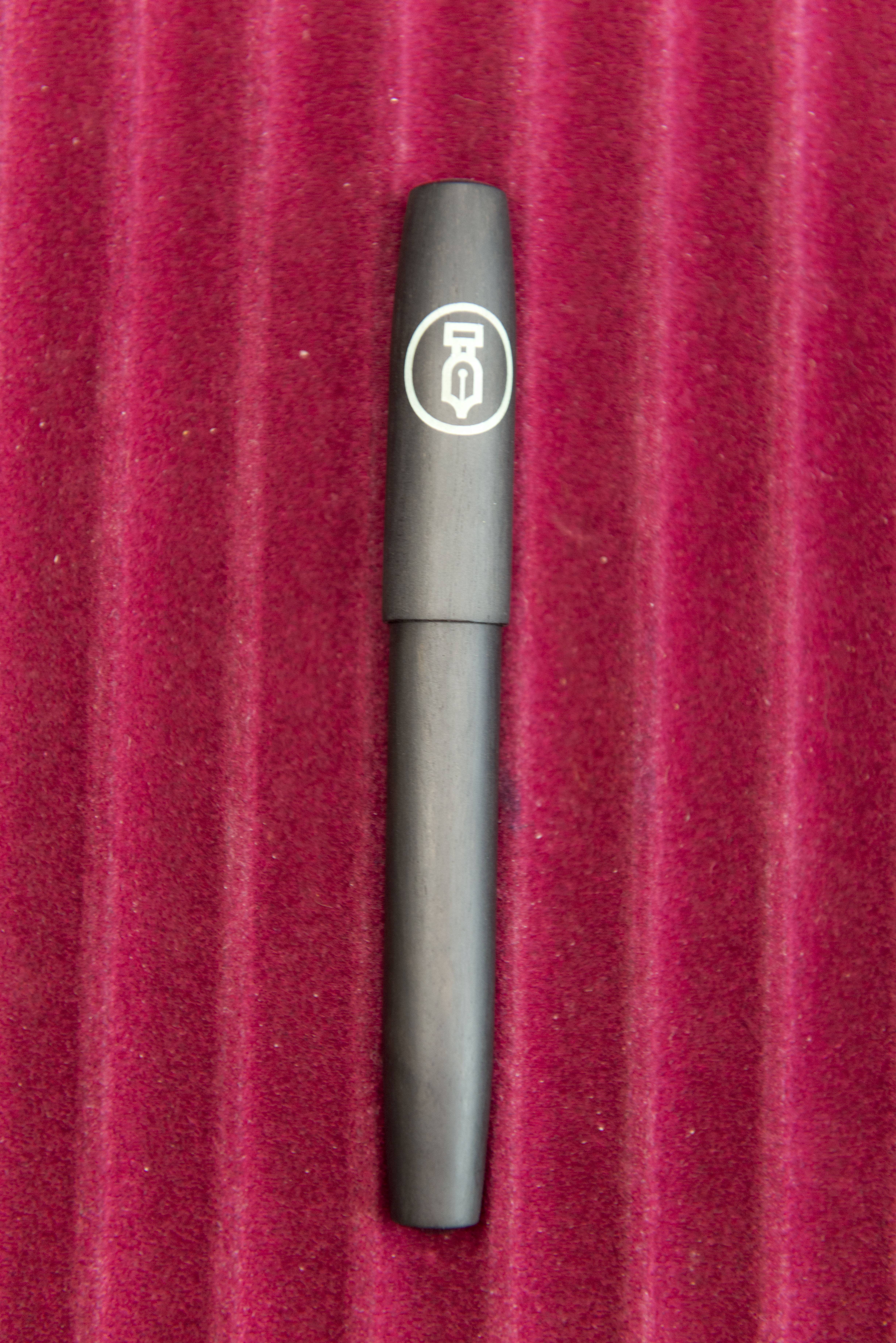 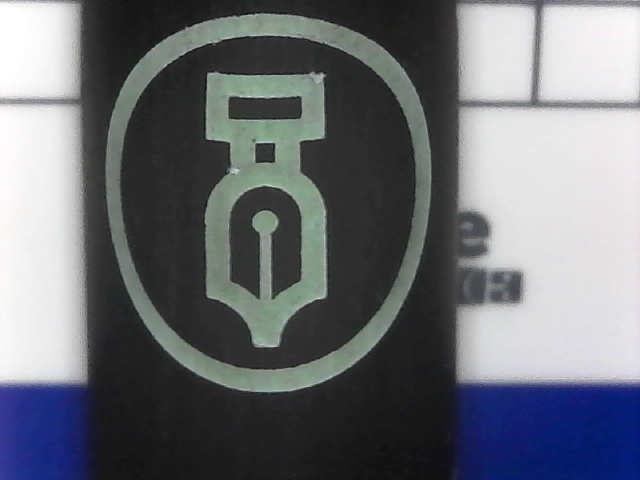 And the Ryan Krusac emblem, along with special edition number on the other. 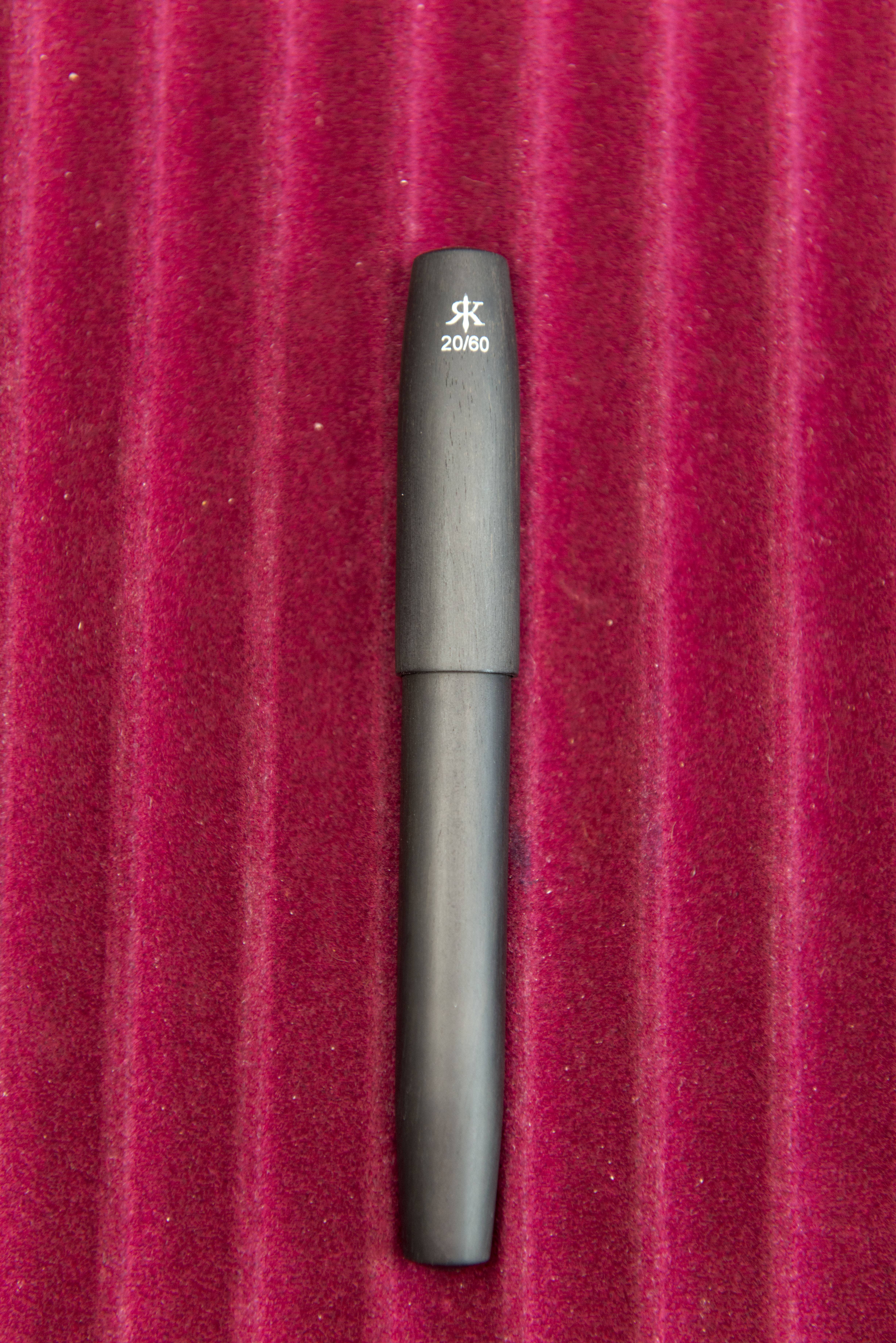 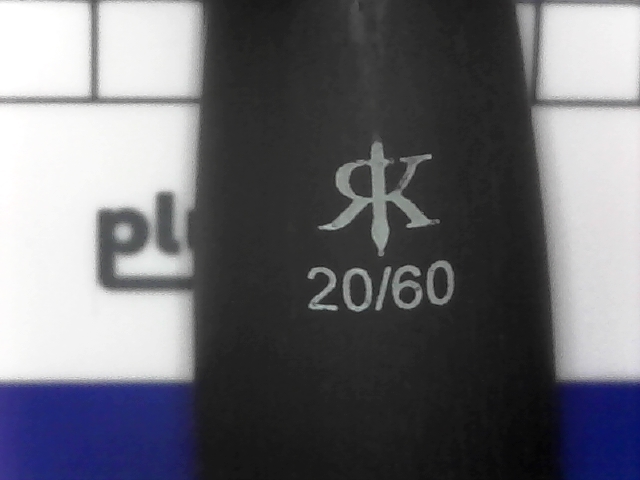 Note buyers could select their favourite number if in the range, so this may have just been the lowest free number, or even a random pick up.

The pen comes with a Krusac Studios engraved JoWo #6 nib, on mine a medium steel one, plus a converter already fitted. 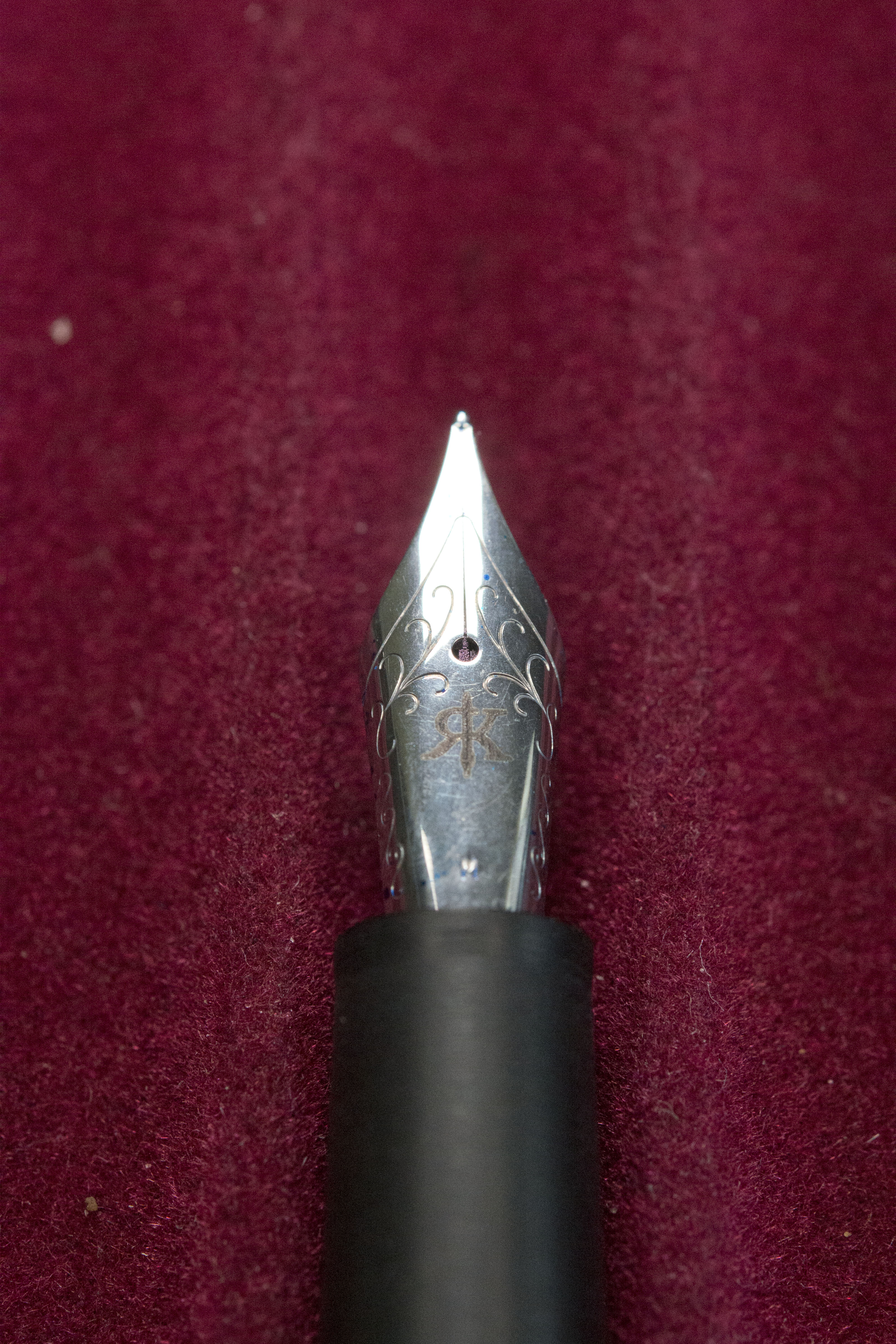 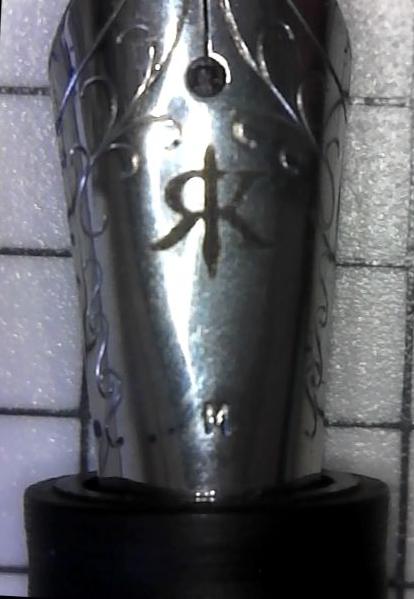 The grip section tapers down slightly before flaring out rapidly to provide a finger rest.  The capping threads and finger rest flared ring appear to be made out of a dark resin/acrylic.  The threads are short and relatively shallow, as is the step up to the barrel, making the pen very comfortable to hold as neither are sharp. 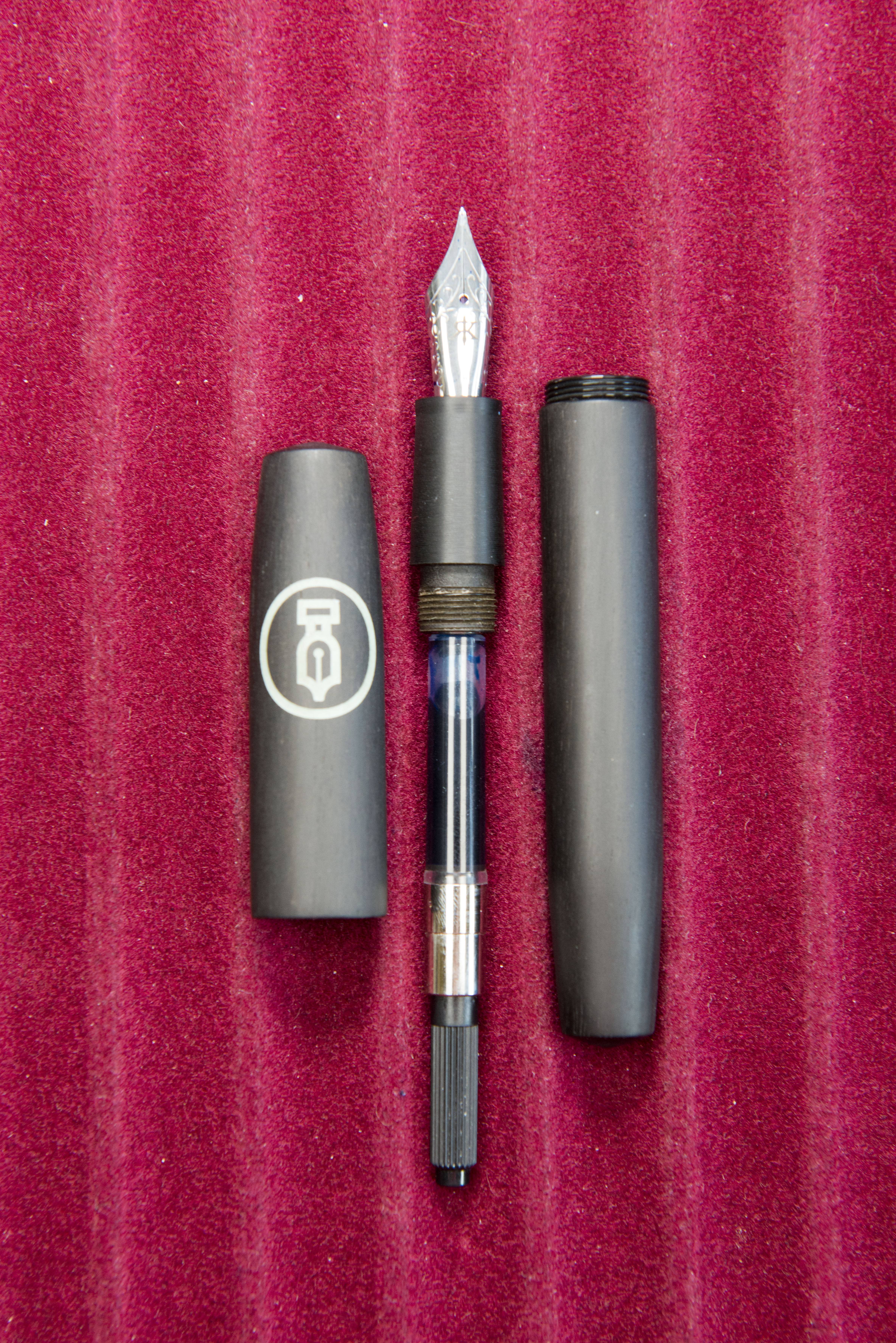 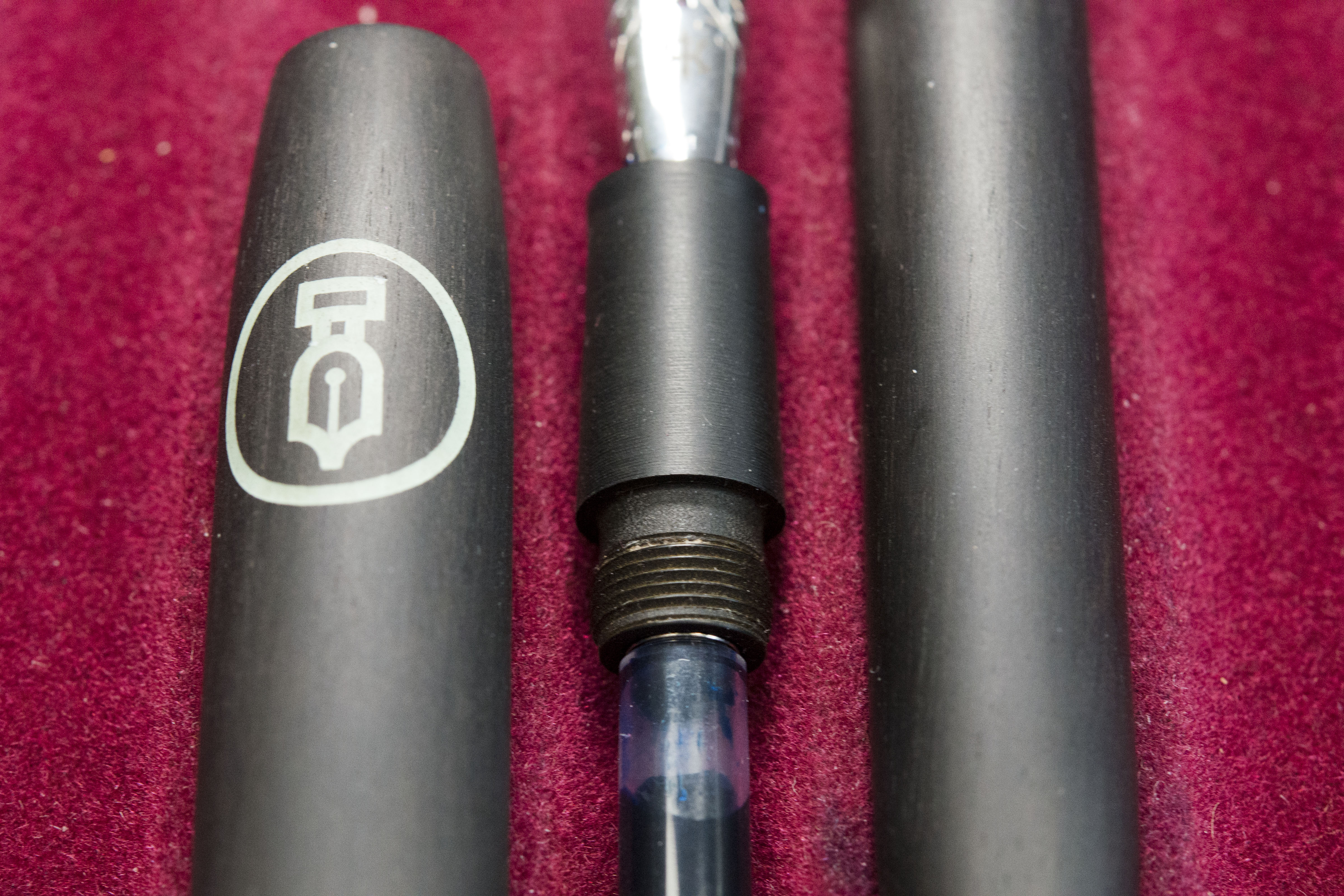 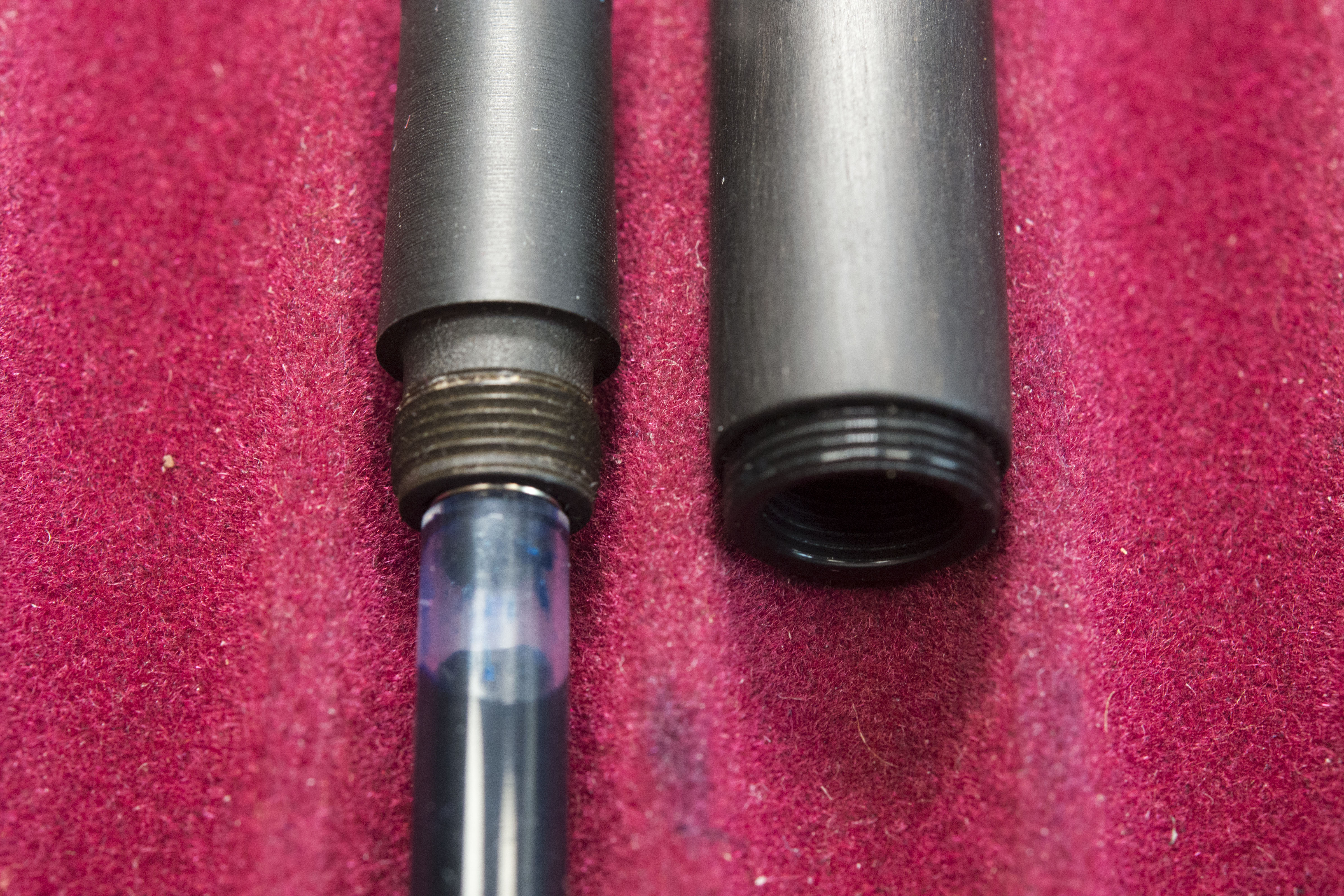 Both the ebonite section and the wooden barrel provide warmth.  Due to the wood the pen also has some heft.  Heavier than a plastic/acrylic pen, but still a lot lighter than a metal one.  It is also very well balanced, making writing a joy.

Size wise, I have included a Sharpie as well as the ubiquitous Lamy Safari as Ryan uses the former as a size comparison for those of us who can not see the pen in the flesh.  For me it is slightly larger/wider except at the widest parts of the grip section. 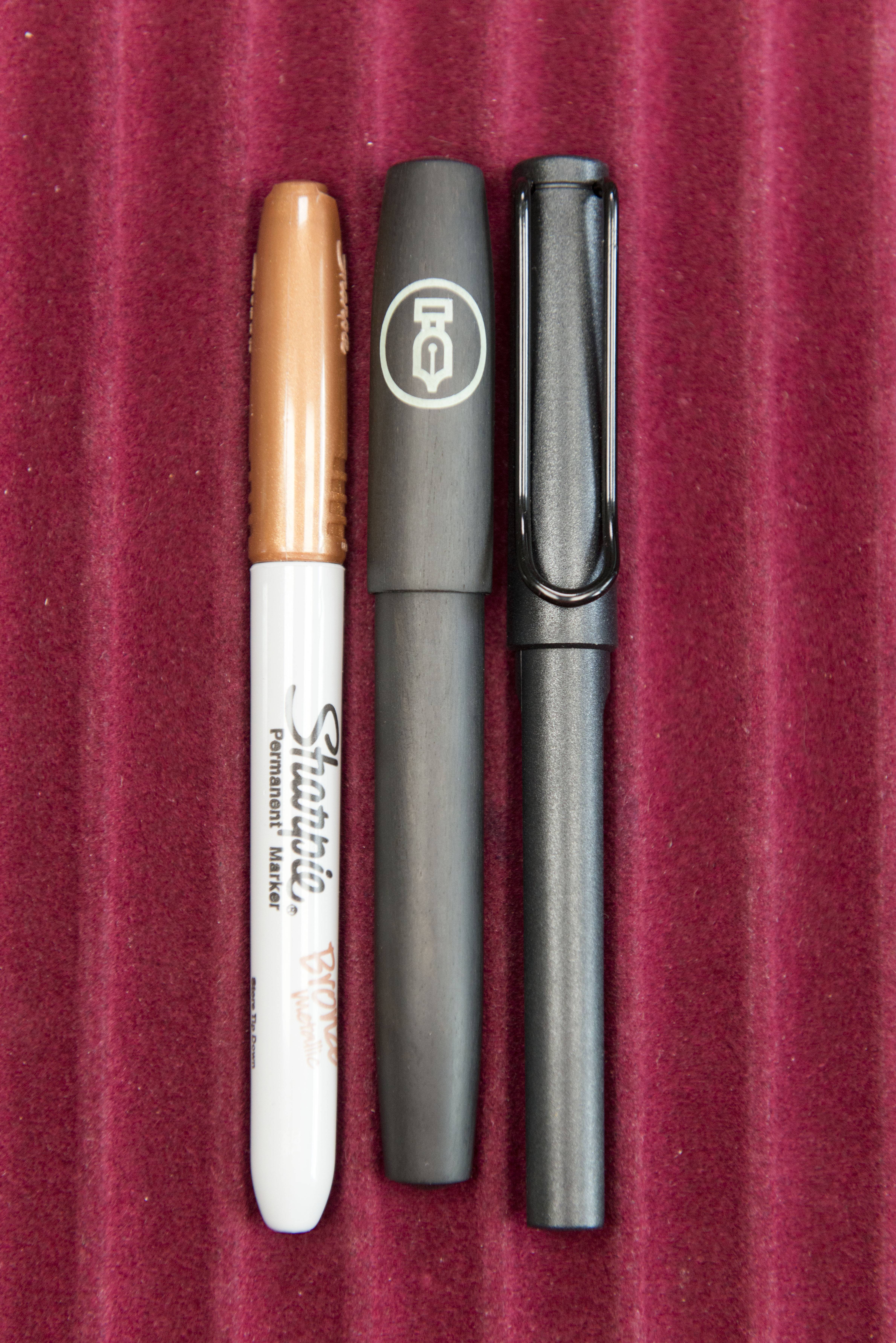 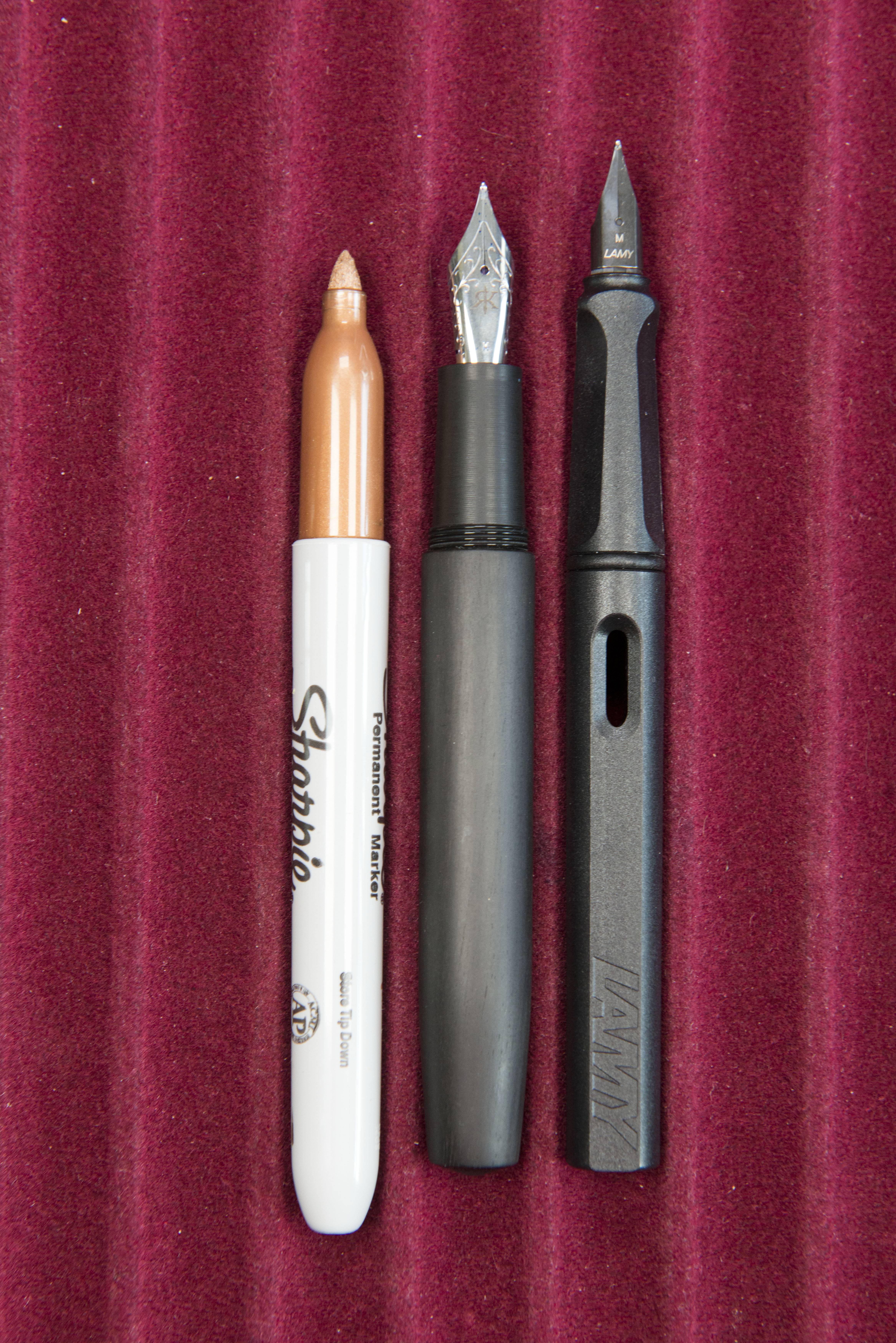 I possibly should have included a Franklin-Christoph Pocket 66 as length wise they are very similar both capped and uncapped, though the FC pen has a narrower grip section.

The cap is wider than the barrel and also lined to prevent ink evaporation, which appears to work well.  The cap finial is about as wide as the top of the barrel, which makes the curves and size of the pen look very natural.  The finials themselves are slight dome peaks, a few mm in height.  Note the cap does not post.  It can be pushed on slightly, but I would not consider this to be deep enough nor secure. 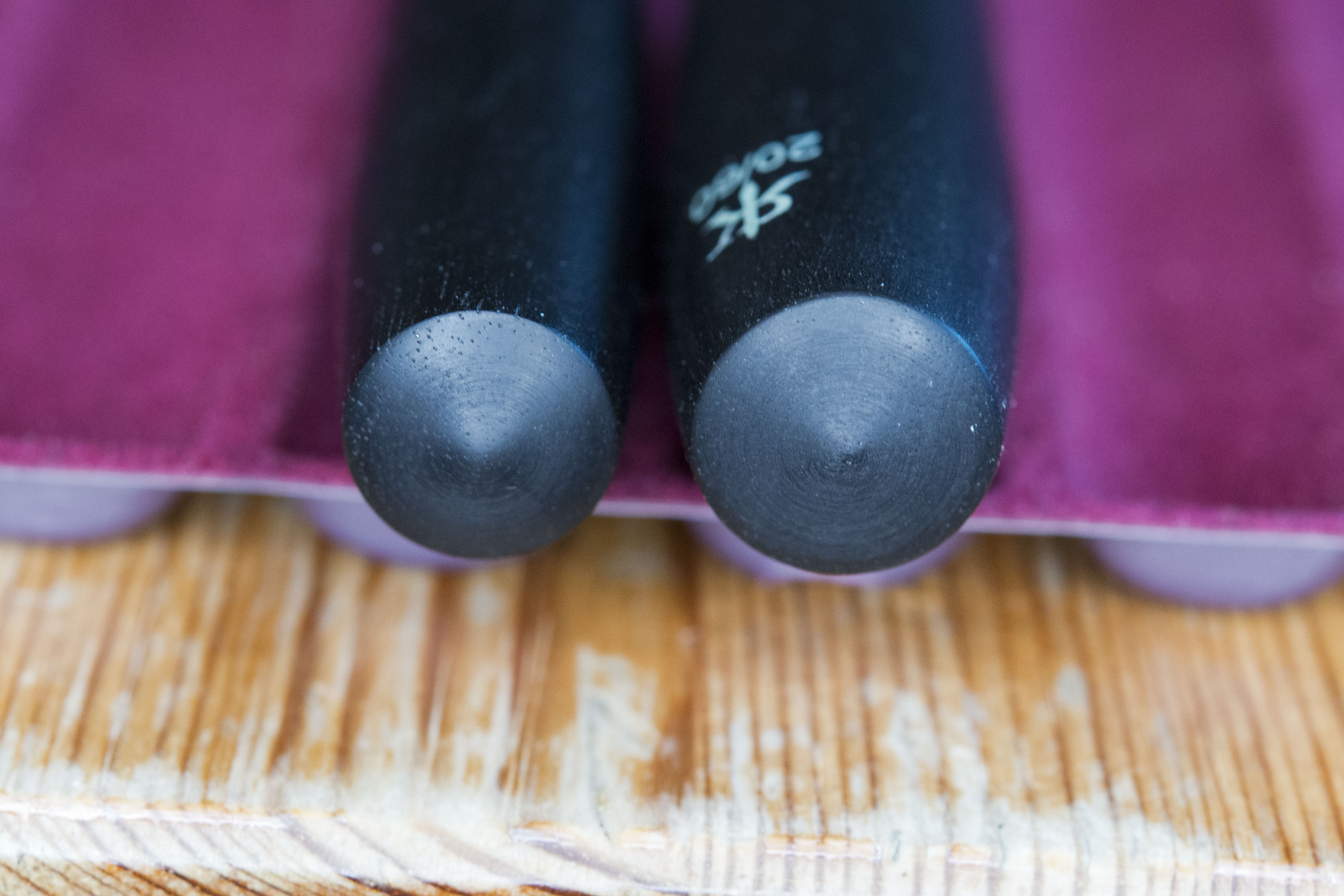 So the question is, after all of the above, do I like the pen.  My thoughts on the costs, and would I recommend one to another person.

Certainly the pen was not cheap, Ryan Krusac Legend series pens start at $300 for the cheapest woods, moving on to $425 when there is a stone in the finials, then rising rapidly depending on wood and art work.  This pen starts at $425 (L15 and L16 sizes are $460), but then you must remember $175 is going towards the scholarship fund and the pen sleeve is also worth $15, making this a comparatively cheap $235 (assuming you also wanted a sleeve).  Postage to the UK is a whopping $70.  Not sure quite why so high, but this has stopped me from buying one of his pens in the past (in the UK there’s another 20% tax, including on P&P to add to the price).  Fortunately for me I was able to find a mule to bring the pen across the pond for me.  Net result, when you compare to other small pen company products,  you are paying for the material and also the craftsmanship.  I would also assume (happy to be corrected) wood takes more time to work with and also may be easier to crack/split (though also I assume it does not have celluloid’s rick of catching fire).

The pen itself is very comfortable to use.  Sure the nib is just a laser engraved JoWo nib, but it does the job well, and after all many other small pen manufacturers also use the same nib.  The look and feel are both very high quality, a lot of care and attention has gone in to the work, and having seen photos and videos of Ryan’s work it is obvious he works to bring out the beauty of each piece of wood rather than just taking a block and working with it regardless.

Net result is I am very happy to have bought this pen.  Additionally, while I normally only buy one of any pen over ~£100-150, if I were in the US at a pen show where Ryan was selling, then I’d be happy to buy another pen.  In my mind these pens need to be bought in the flesh as that’s the best way to gauge the pattern and grain of the wood.

And finally here is the writing sample. 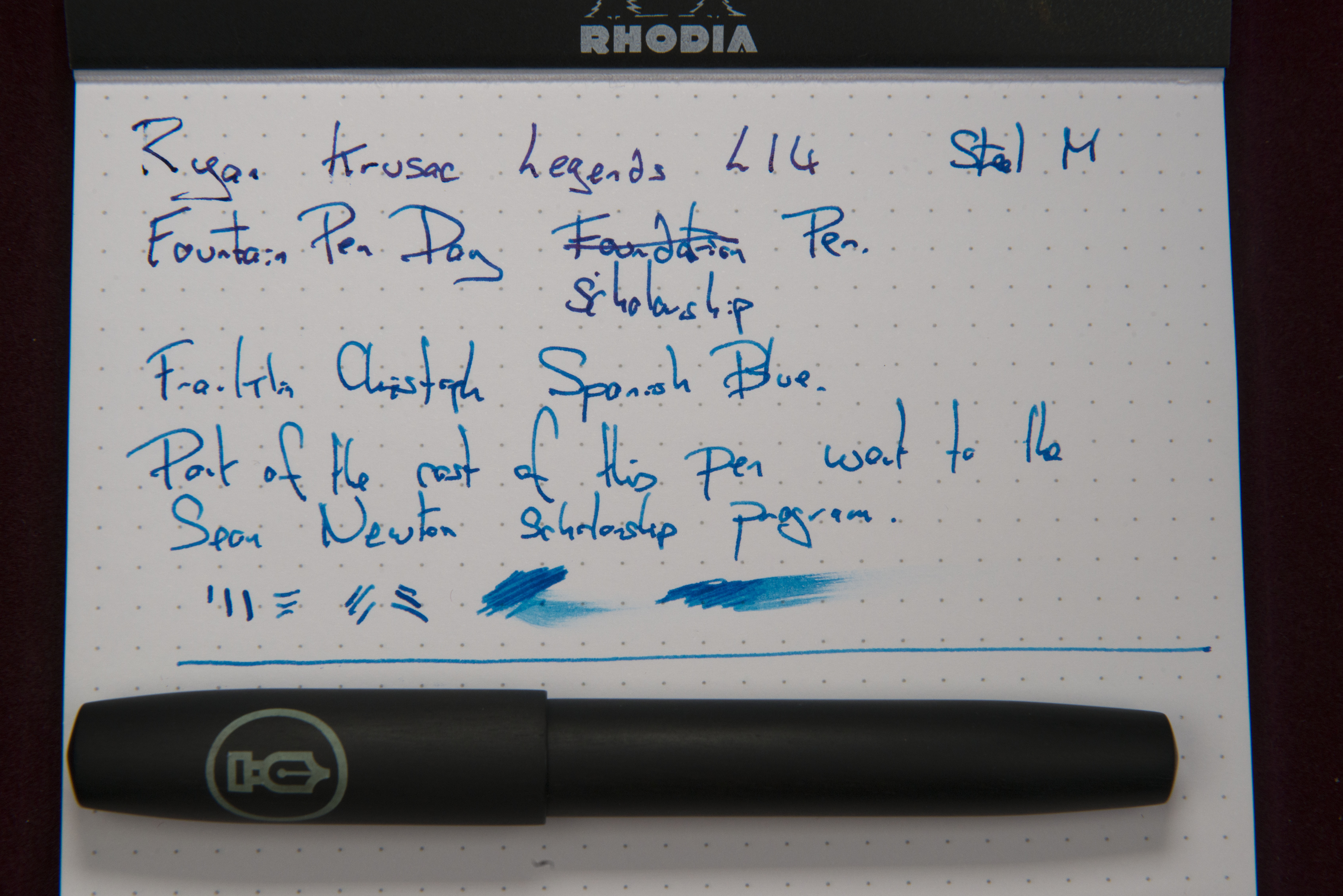 Please note the writing sample was taken just after the photo session, where the cap was off for a while, hence a part dried nib and the effects of that on the first few words.

While I paid for this pen myself and at full price I would like to thank Ryan Krusac for three videos he shot as he walked my through his pens, grouped by L14, L15 and L16.  Also thanks to my mule (I won’t mention her name to avoid the risk of any trouble) as she was happy to bring the pen over and post it from Scotland.