Franklin-Christoph must be one of the worst kept secrets in the fountain pen community.  A small North Carolina based company who only sell on line and at US pen shows, yet try finding a fountain pen club around the world where at least a few of their members do not own one or more of their pens.

It is coincidental that I decided to write this post (having contemplated something along these lines for around 3-6 months) on the day when the Triangle Pen Show, their local one, was due to start.  Franklin-Christoph actually did not move to the area until after they had started making fountain pens.  The company relocated in 2005 yet many of us may not know that their first pen, the IPO, was launched almost twenty years ago, back in 2001. 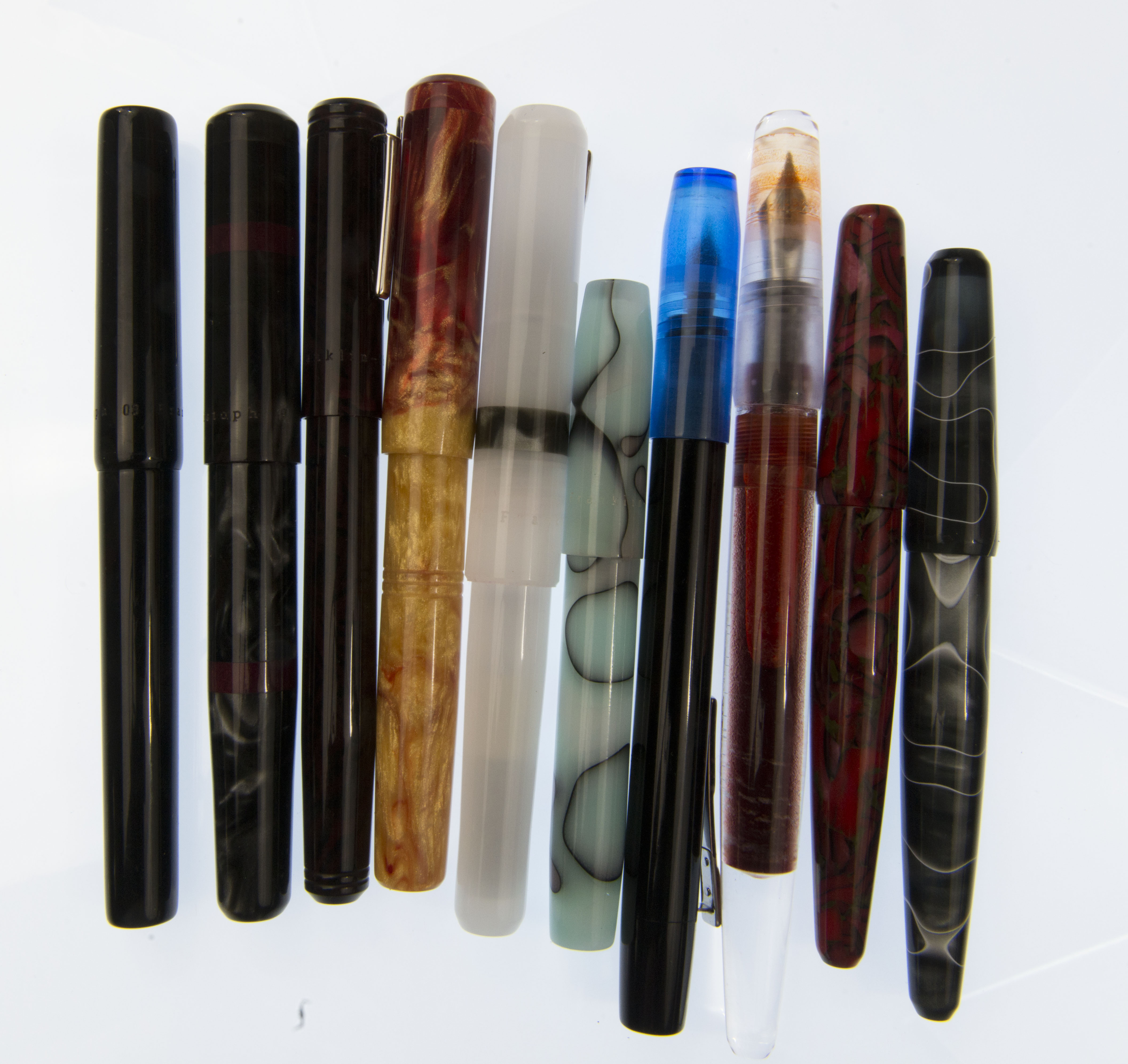 It is hard to talk about Franklin-Christoph without sounding like a fanboi, however try finding someone with something bad to say about the company even if they do not like their products.  The life time warranty (excluding user  fault – yes I killed my first nib, and yes it was a SIG) , even on transferred pens, certainly helps.  As does the friendly and helpful staff, the 30 day no quibbles return policy, and also quick deliveries – I actually ordered a pen one day and received it the next, remembering I’m in the UK, not the USA.

Nibs are another thing F-C are known for.  Every pen bought from them will have its nib tested and tuned.  At pen shows this is while you sit with them.  By default they tune the nibs to be slightly dry as it is a lot easier to make a nib wetter than reverse the process.  On ordering (if buying on line) you can give details of any alterations you require.  In addition to the usual sizes in steel and gold, including flex and music nibs, there are a number of speciality grinds available.  Possibly the most famous of these is the ‘Stub Italic Gradient’ or SIG nib, available in fine, medium, broad (and occasionally BB).  This was the creation of Jim Rouse and is now ground by Audrey Matteson (there are friendly debates on line as to which is preferred).  In addition Mike Masuyama has produced needlepoint, cursive italics and cursive stubs for them, though what will happen once he shortly retires we are yet to hear.

I would suggest that US pen shows are their natural sales territory as far more pens are available at those than on line.  Occasionally these limited edition and one off variations (known as prototypes) do appear in their store but it can not be a surprise that some fountain pen communities organise attending mules to browse and pick up these rarities for other members.

So what pens do I have?  – note I will not be reviewing them here: 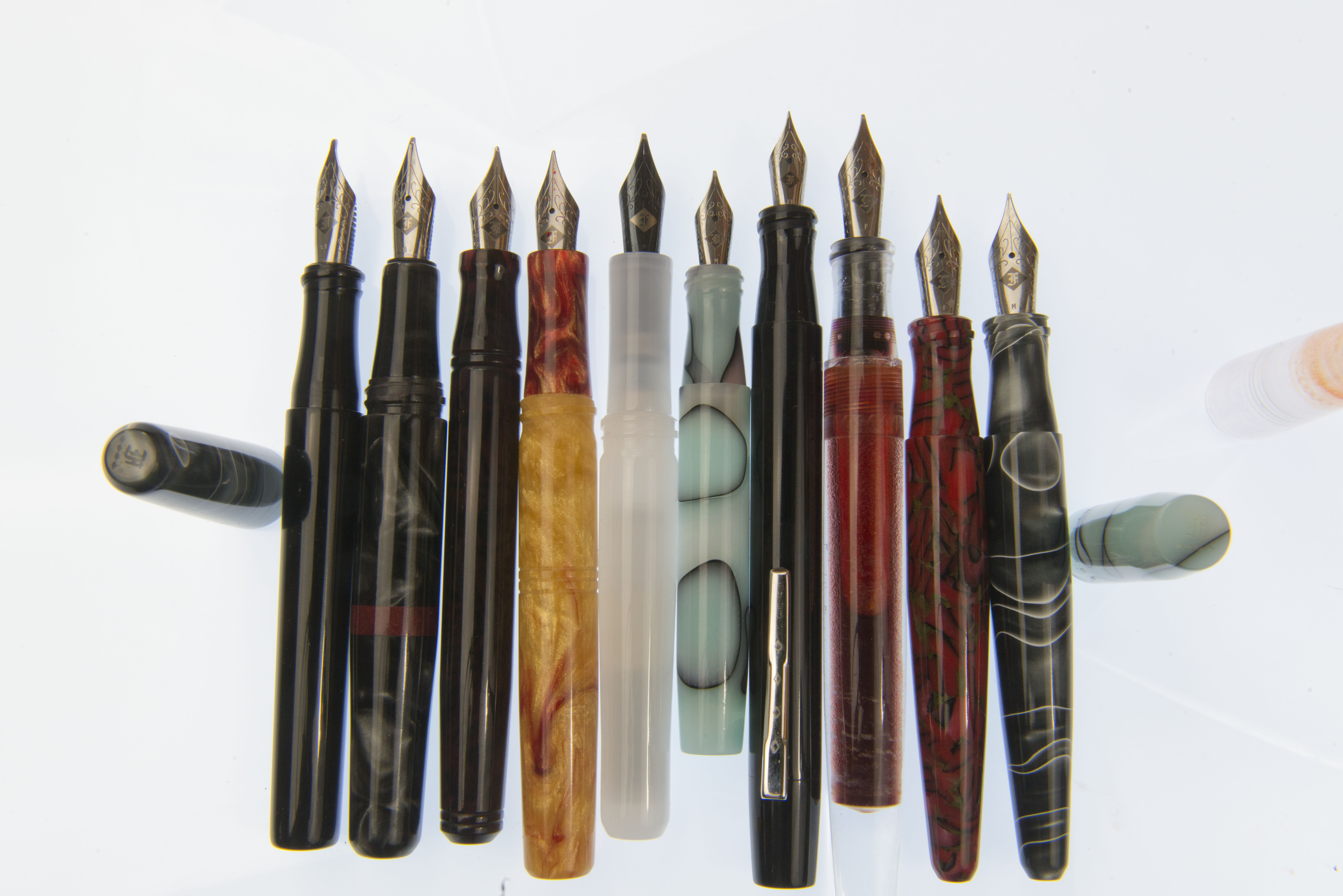 In addition I also have: 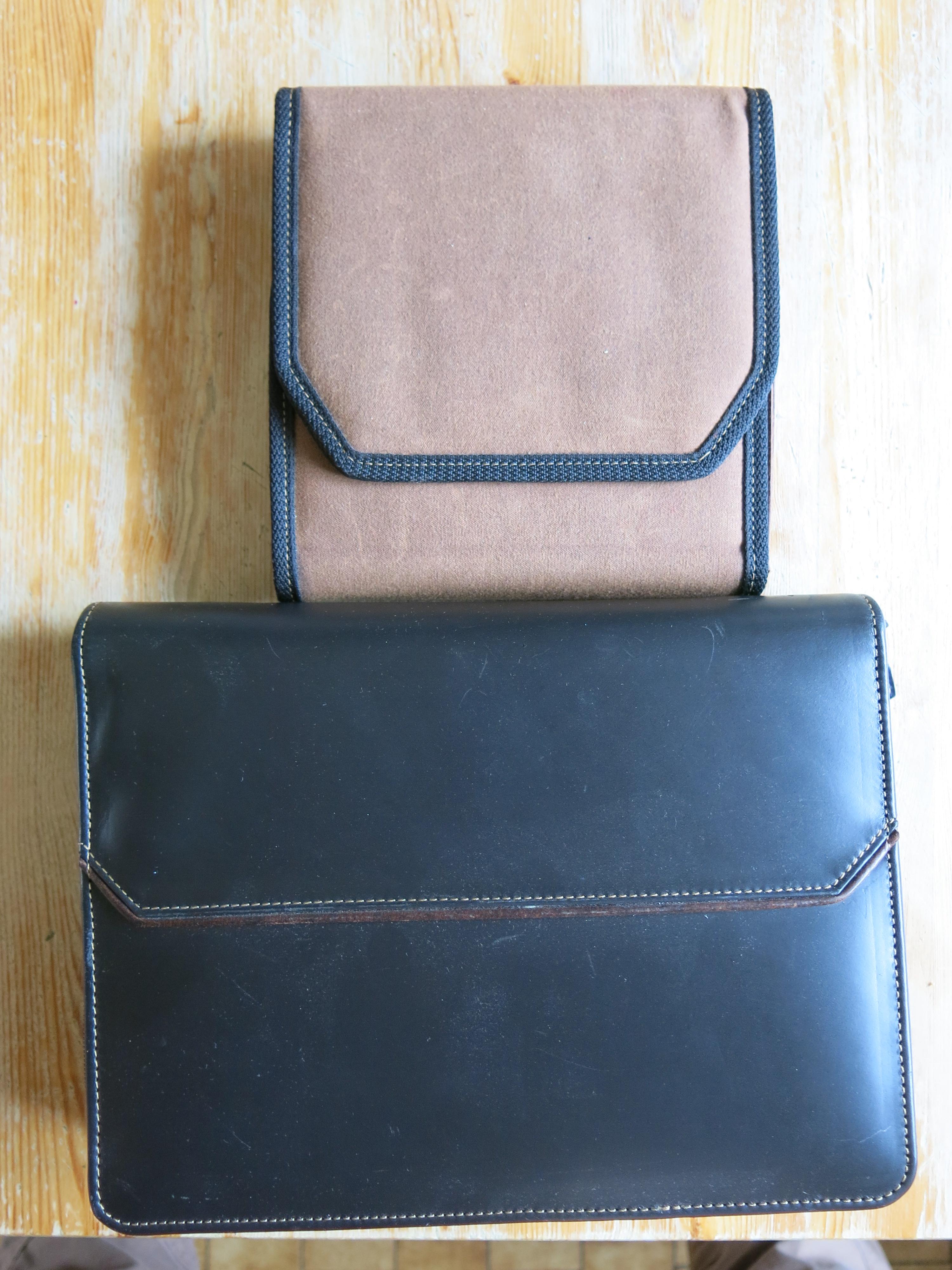 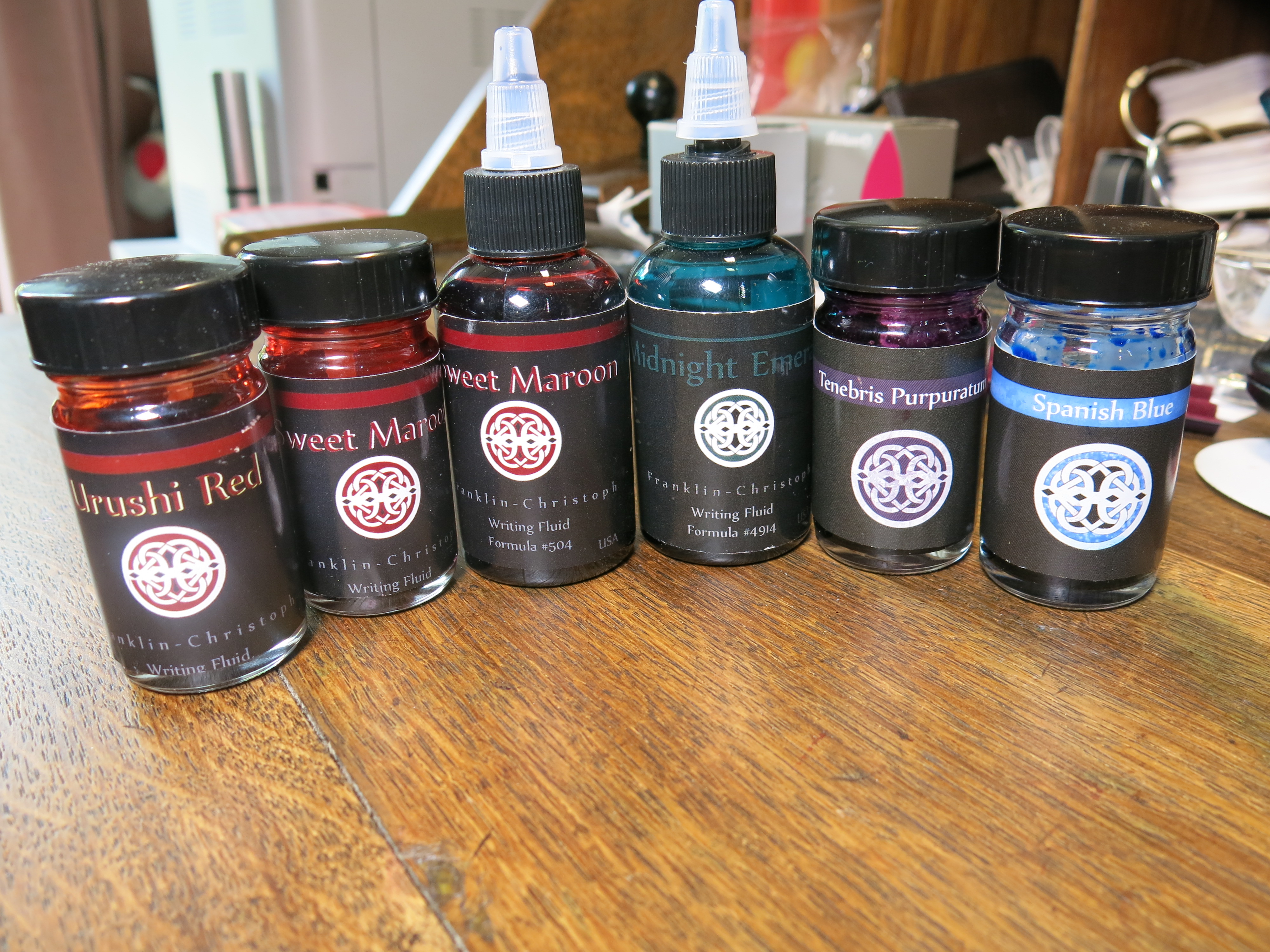 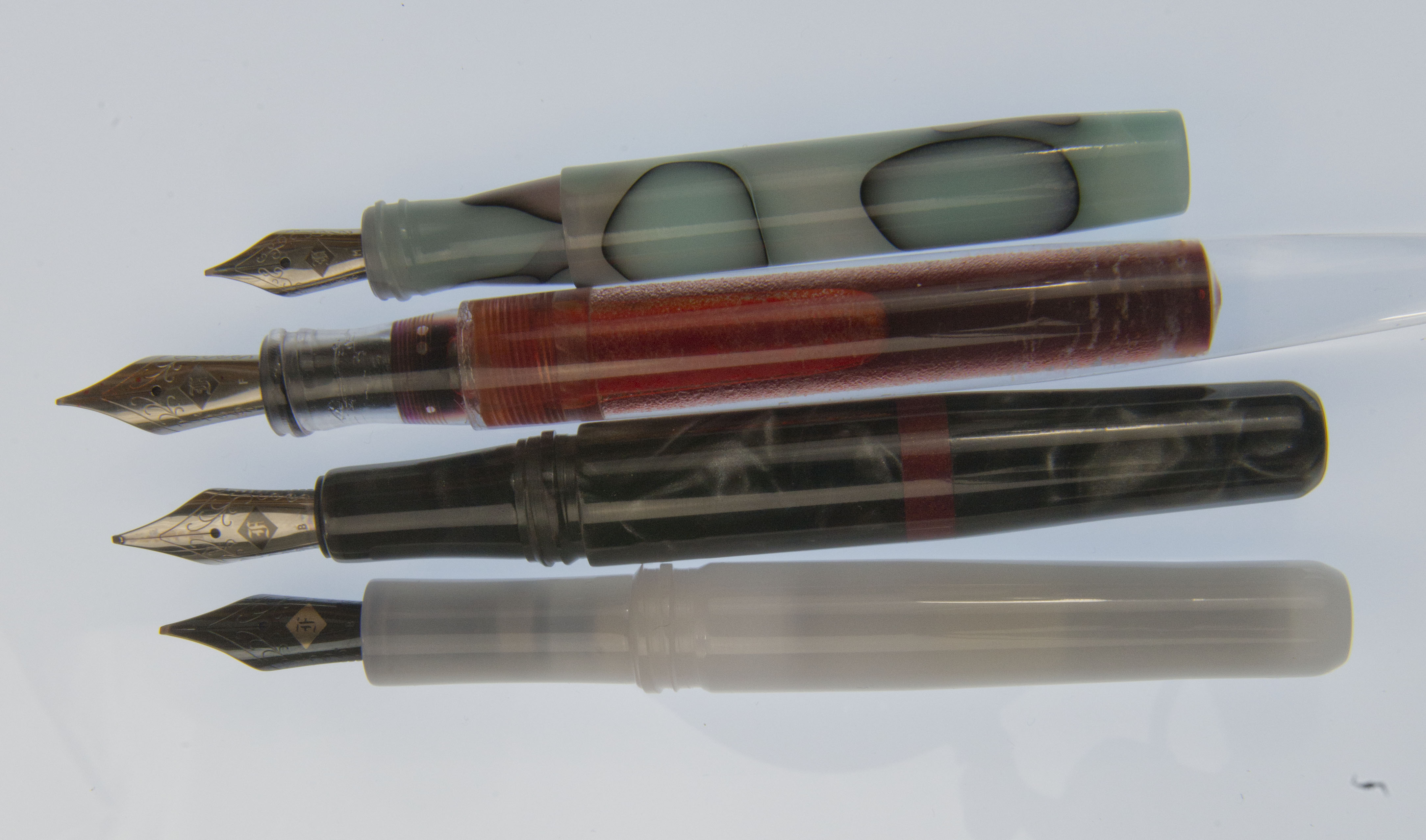 My SIGs (minus the grey swirl Pocket 66 – forgot what nib it had when I took this photo).

7 thoughts on “A Fist Full of Franklins”