Not sure anything else raised so much hype, confusion, divisiveness and controversy in the fountain pen world in 2020 (so far).  Limited supplies, production/design problems, different perceptions on costs have already created plenty of bandwidth on the various on line forums.  But is the Platinum Curidas any good? (for me the title may be a bit of a give away).

I previously compared it with its two common rivals, the Pilot VP/Capless and the Lamy Dialog 3, where I think my initial positive views came through.  It’s certainly not a pen for everyone and the compromises retractable nib pens have to make mean a lot of people will always struggle to get a comfortable grip.  I would suggest that the Curidas is probably the most adaptable and easy to hold of all of them, but at the same time there are plenty of other reviews out there where people complain about the grip, the clip, and probably the most, the roll stopping trap catcher on the underside. 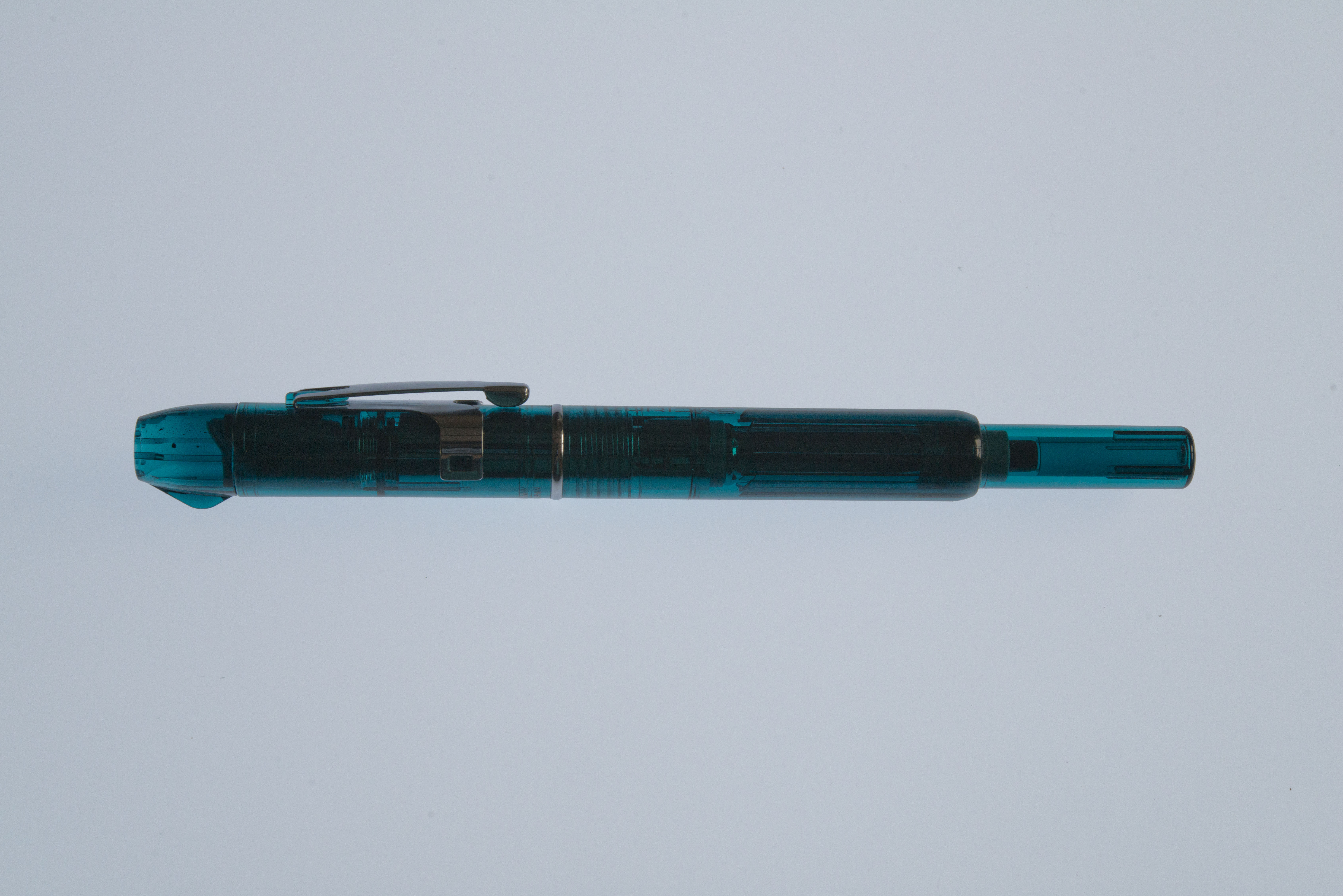 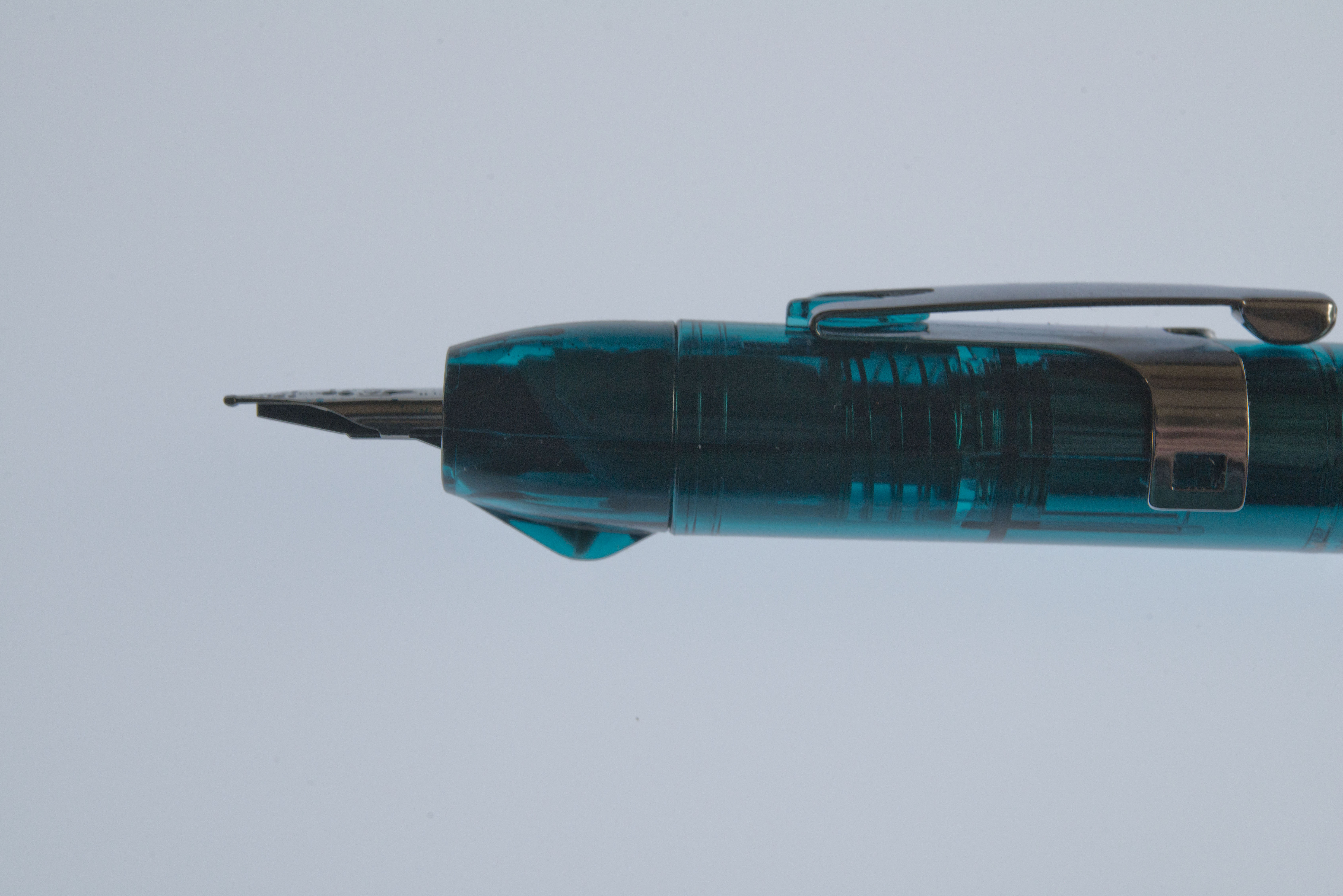 From the start I need to admit not all has been rosy for me.  My feed did crack after just a few days.  I’m certain this is a design flaw, which I will discuss later, but is has not got any worse and I decided to keep on using the pen rather than sending it back for another.  Cult Pens, from whom I bought it, were happy to swap but then that one might fail as well, certainly there seems to be no consistency and rumours are now going round that Platinum has paused production as US stores seem to be struggling with supplies again and a quick look in the UK indicates it could be a similar situation here for while both Pure Pens and Cult Pens have plenty of options in stock, they also have more than a few for which they are waiting for resupply. 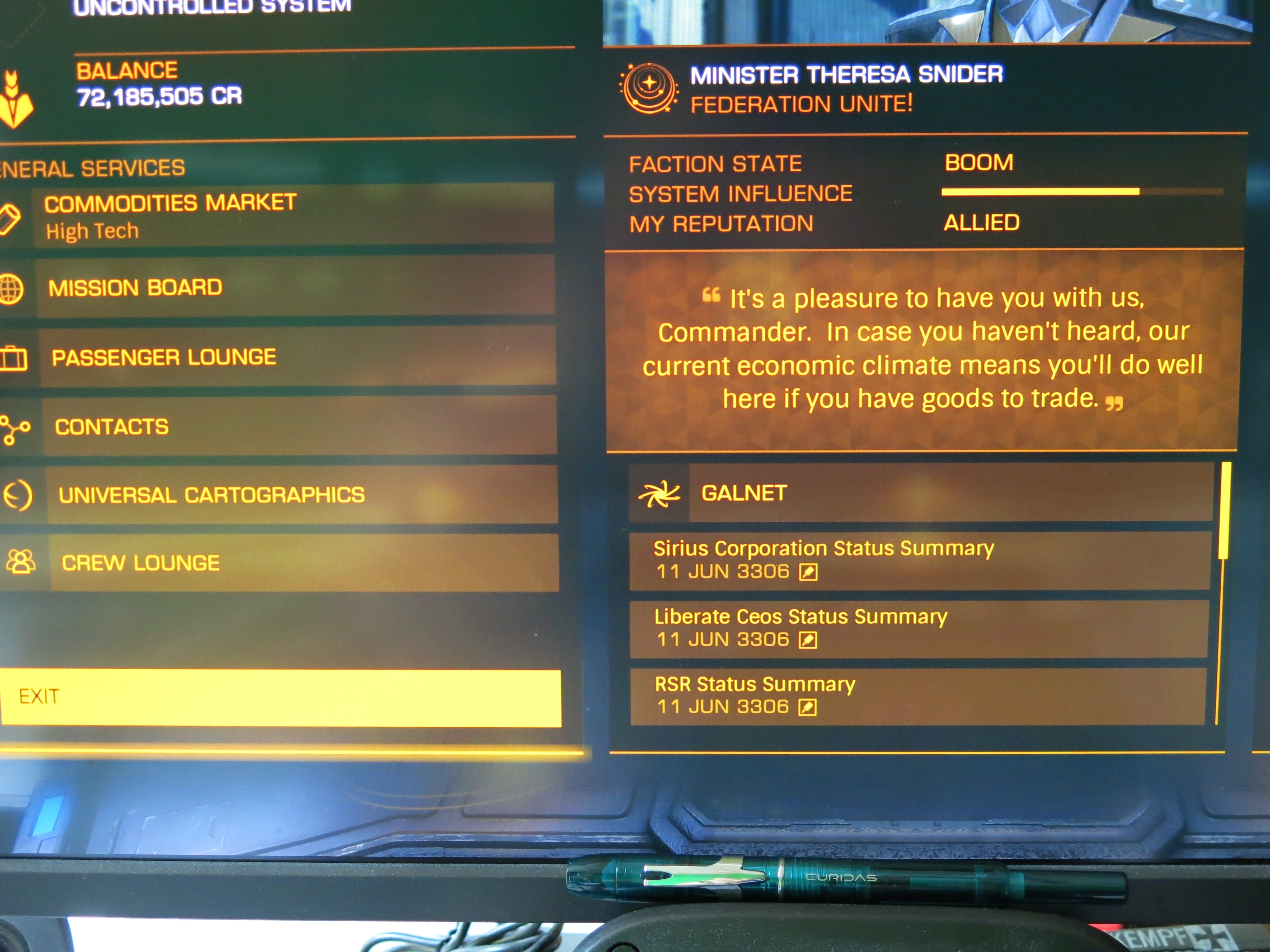 Where this pen has really worked well for me is sitting by my computer.  I play computer games.  Always have been quite bad for that.  Some have required note taking, and I don’t just mean taking down a name or two.  As a former Eve player I already knew Elite Dangerous, with the need to track resources, target locations for mining and exploration, notes to remember, and being a new game to me, key presses, would mean a surprising amount of writing.  I’ve actually gone through a complete fill in just a couple of weeks, which is very quick for me.  Part of why the Curidas has filled this role so well is because of the click to open and single handed usage (sorry Lamy, you do need 2 hands for the Dialog 3) and for me I find it a lot more comfortable to use than a Vanishing Point.  It’s actually the reason I’m able to review this pen after under four weeks of ownership.  Normally I look to two to three months minimum unless there is a specific need.  This time it’s just been used a lot and I’ve really enjoyed note taking with the pen. 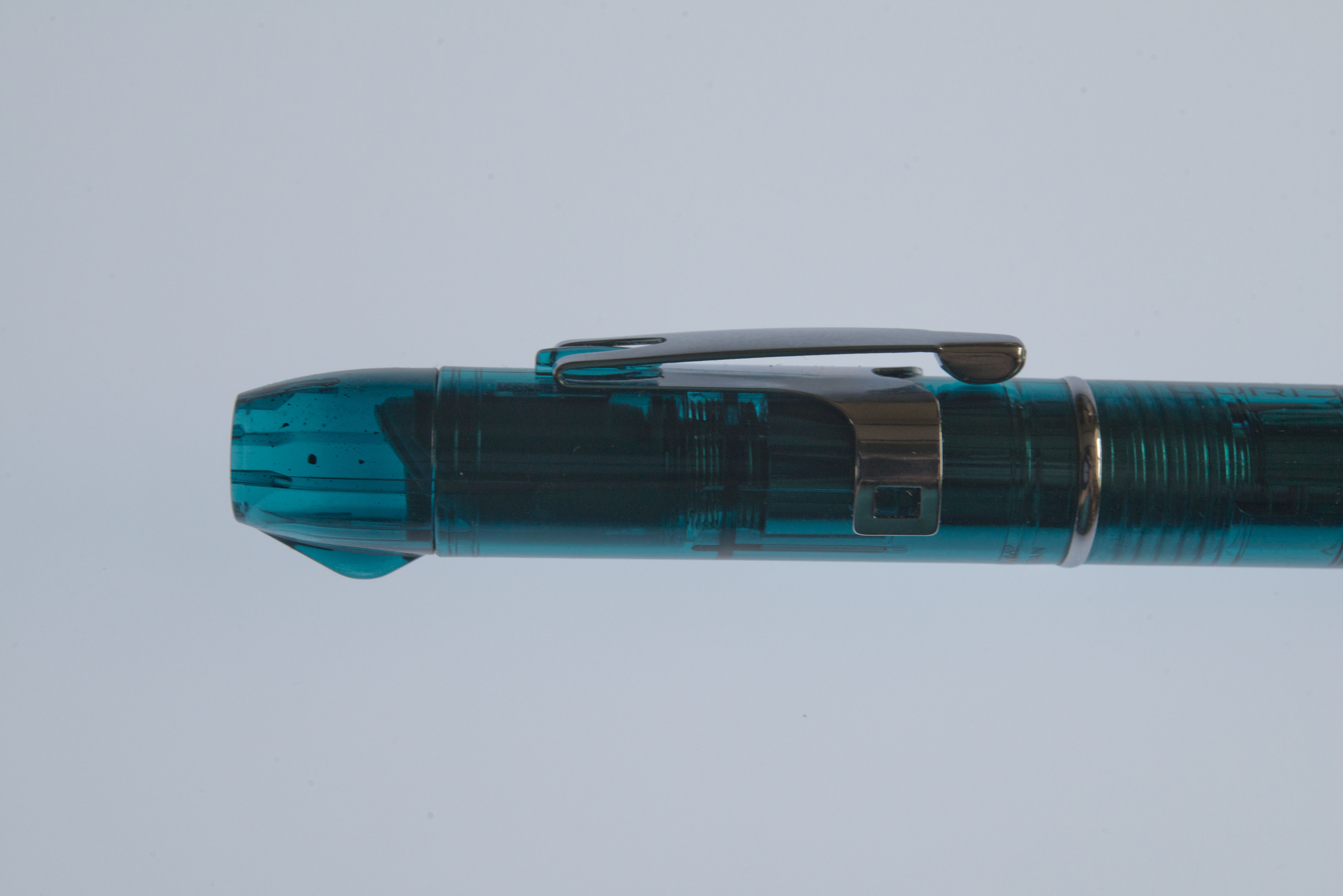 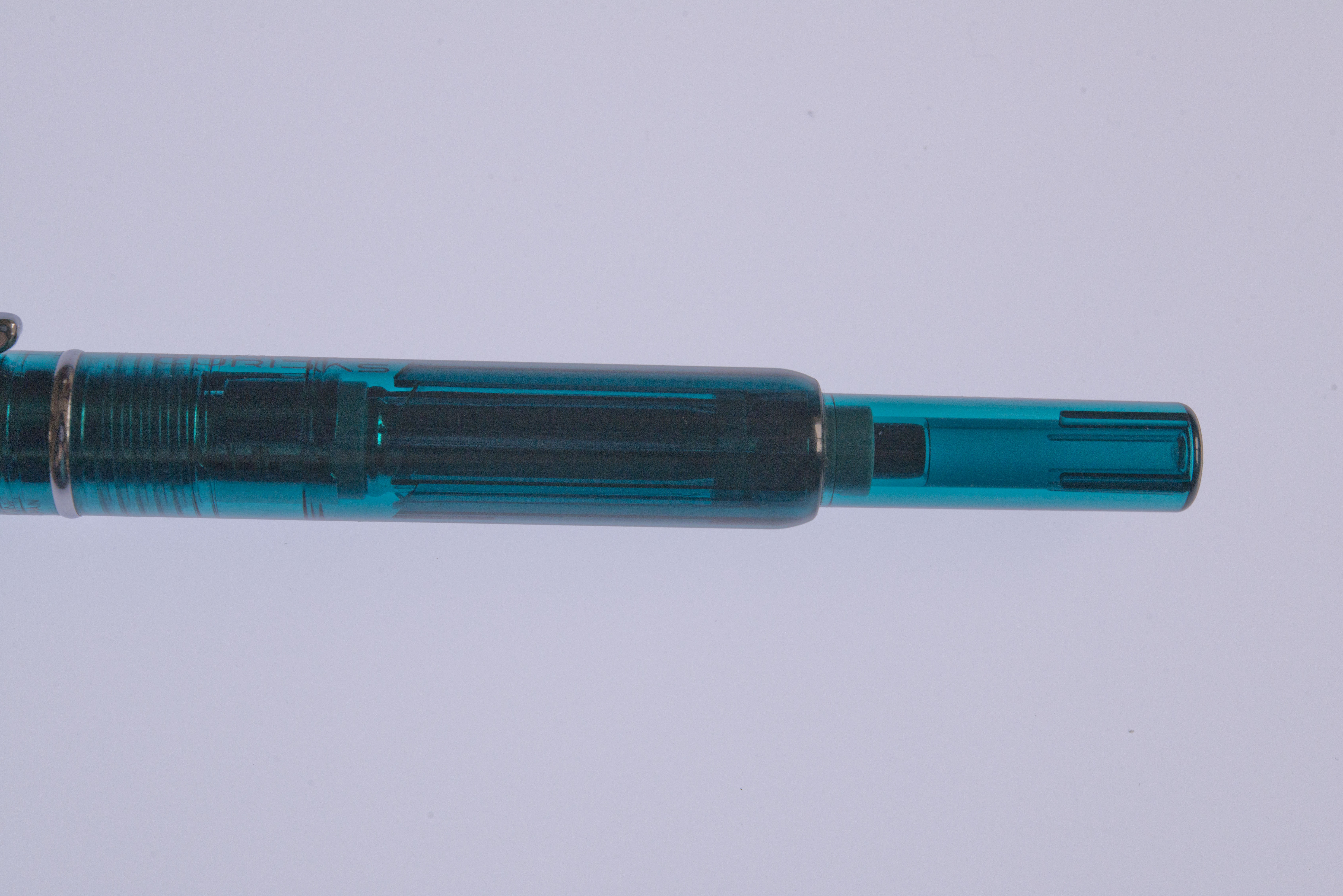 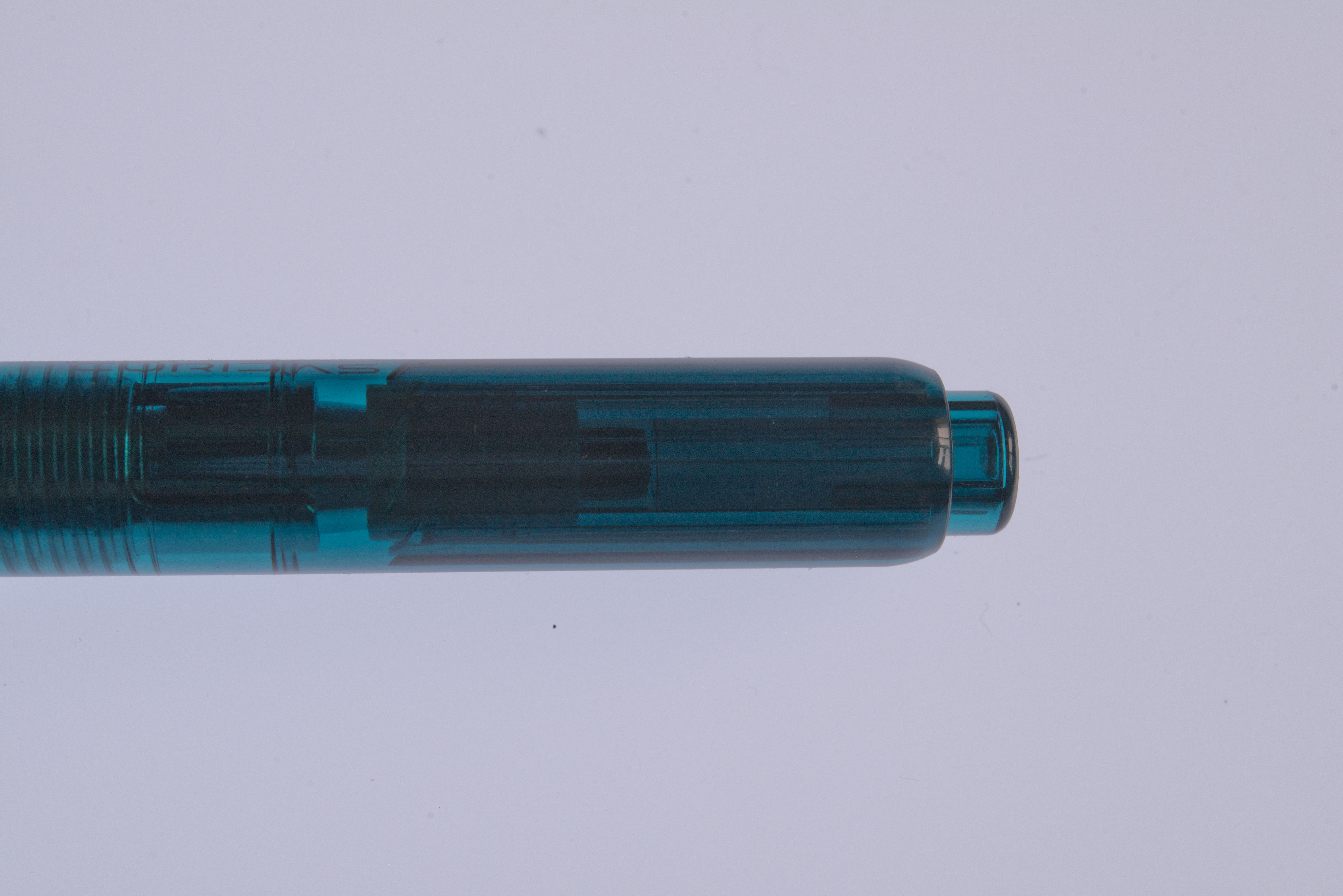 For size and dimensions/comparisons, check out my previous post, on this occasion I demand the right to be lazy 🙂 plus it does save repetition.  Ink wise I’ve loaded it with Lamy Turmaline, their limited edition ink for 2020.  It is a good match and works well with the pen as well as being a very similar colour.  Nib wise, out of the three options I went for the largest, Medium – the others being Fine and Extra Fine. 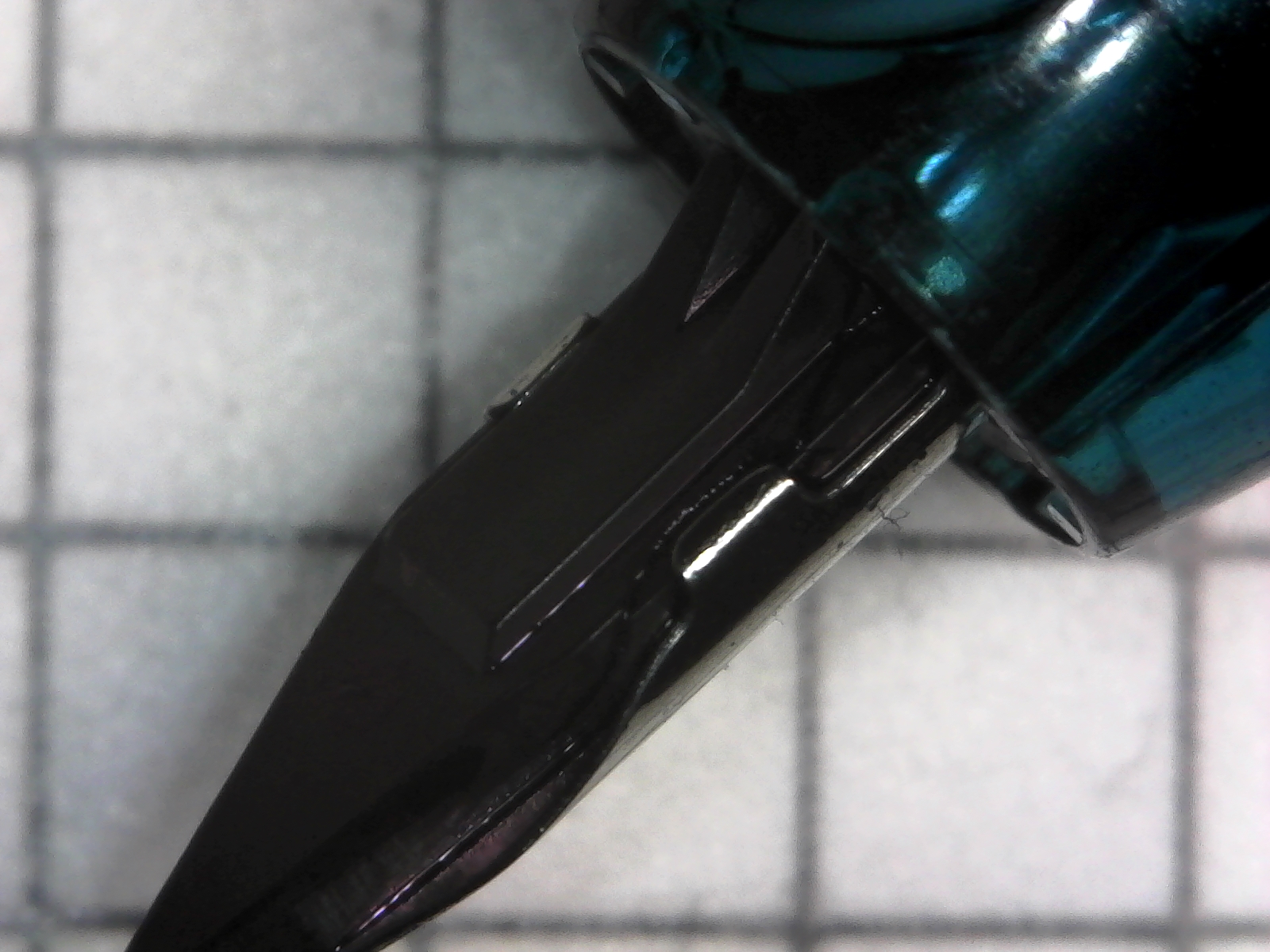 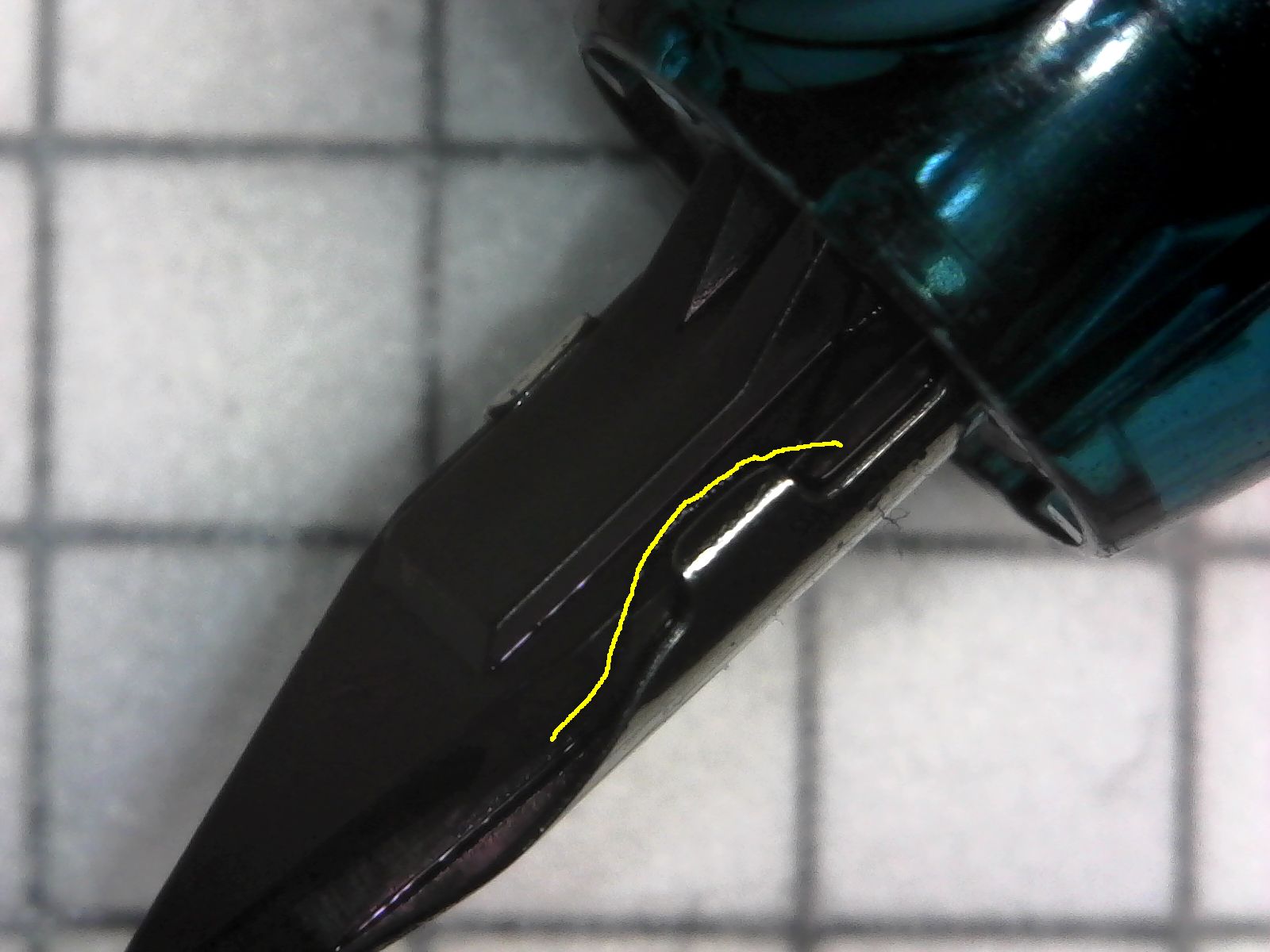 On the cracking feeds my belief is that there is a fundamental design flaw.  Virtually every photo I have seen has shown the same thing.  A single crack either under one of the securing wings, or in the centre, with the former curving round the metal, and with the latter, straight towards the nib.  This does infer too much pressure is being put on the wings and the inside of the feed is not flat against the nib, but rather raised slightly in the middle, allowing pressure to pull down the sides until something gives.  This will also probably be the reason why no one has yet to see a crack worsen.  The worrying part is Platinum never spotted this on testing, yet most of us found the cracks developing quite quickly, within just a few days of starting to use the pen.  Speculation on my part, I know, but if I am right then hopefully it is fixable. 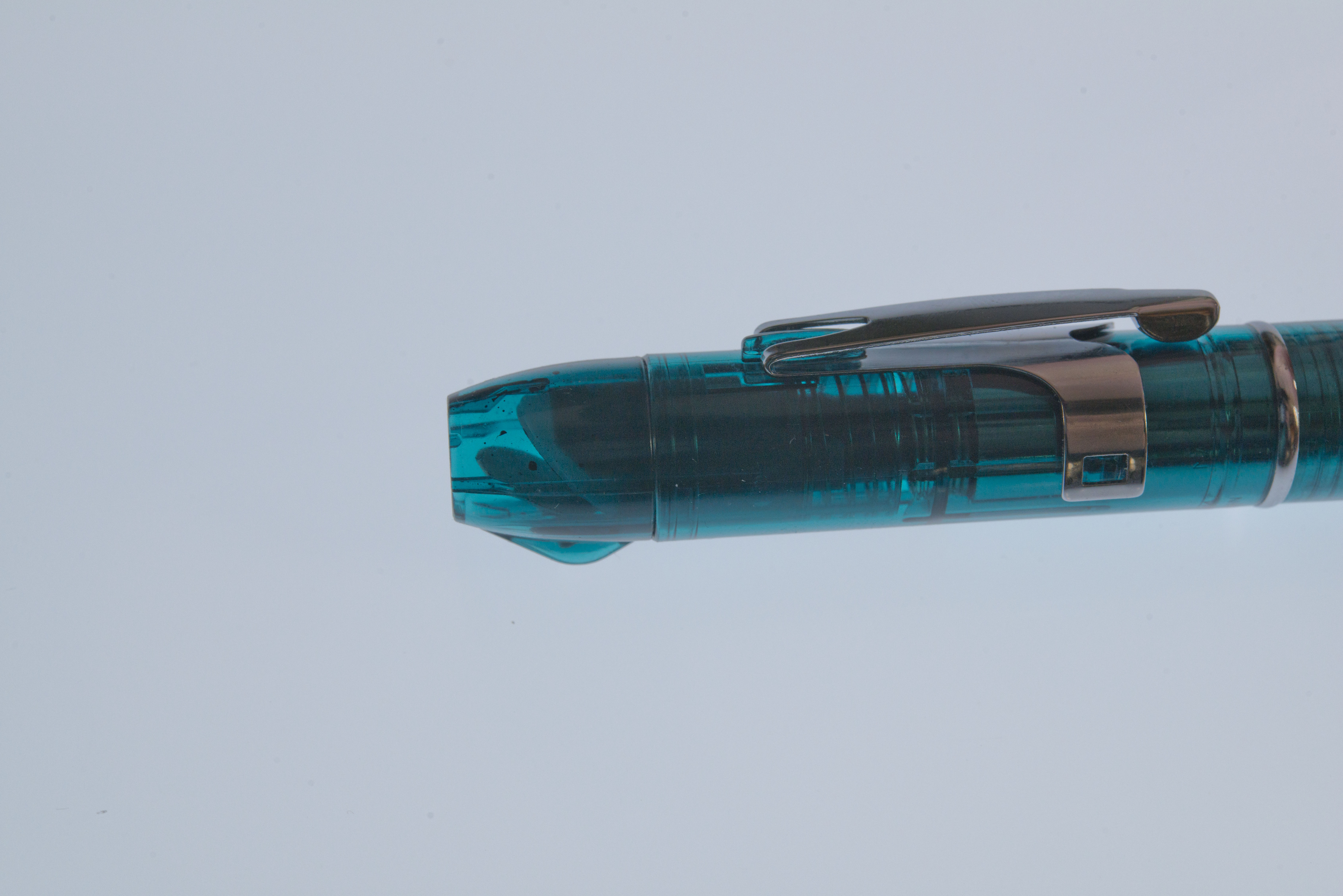 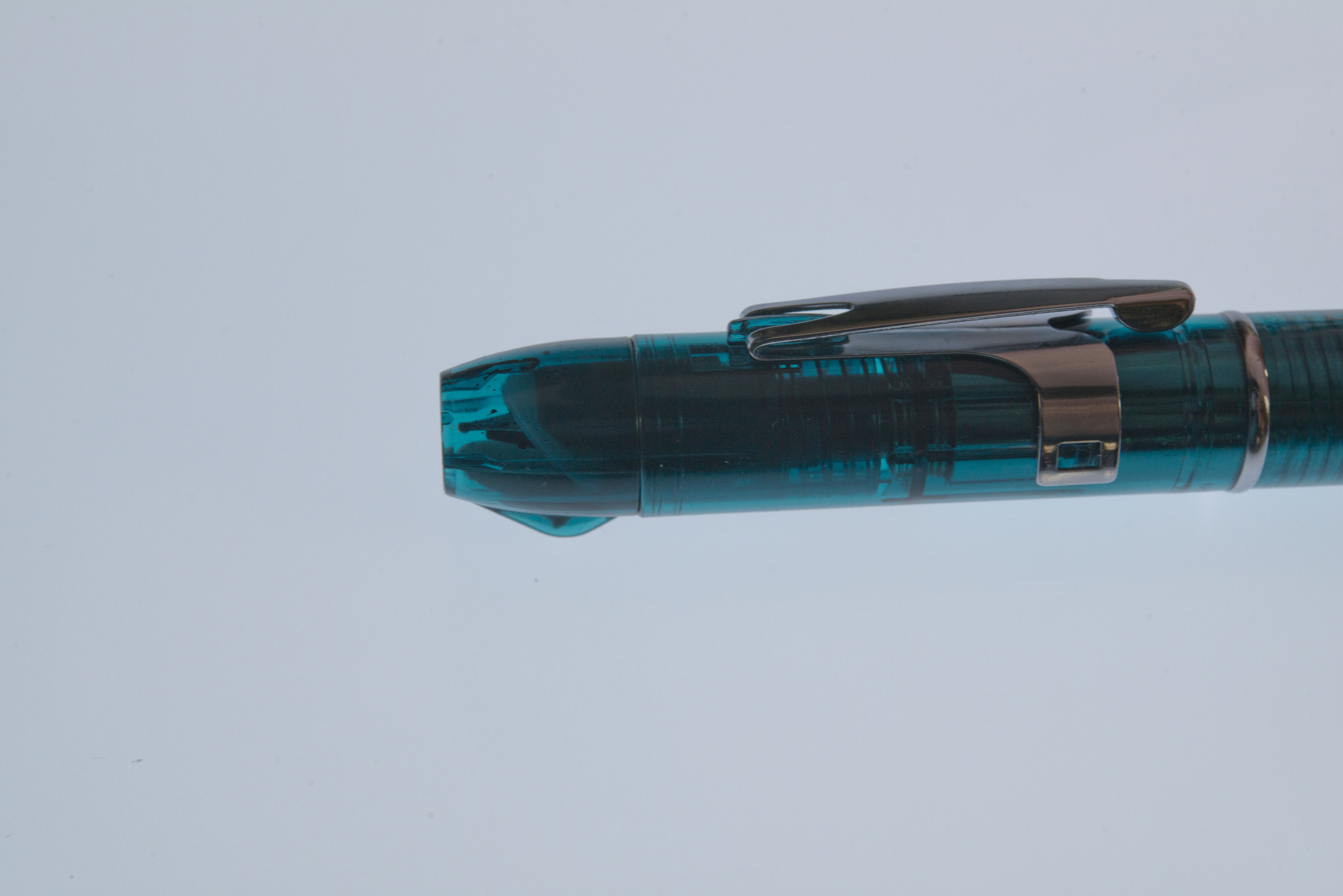 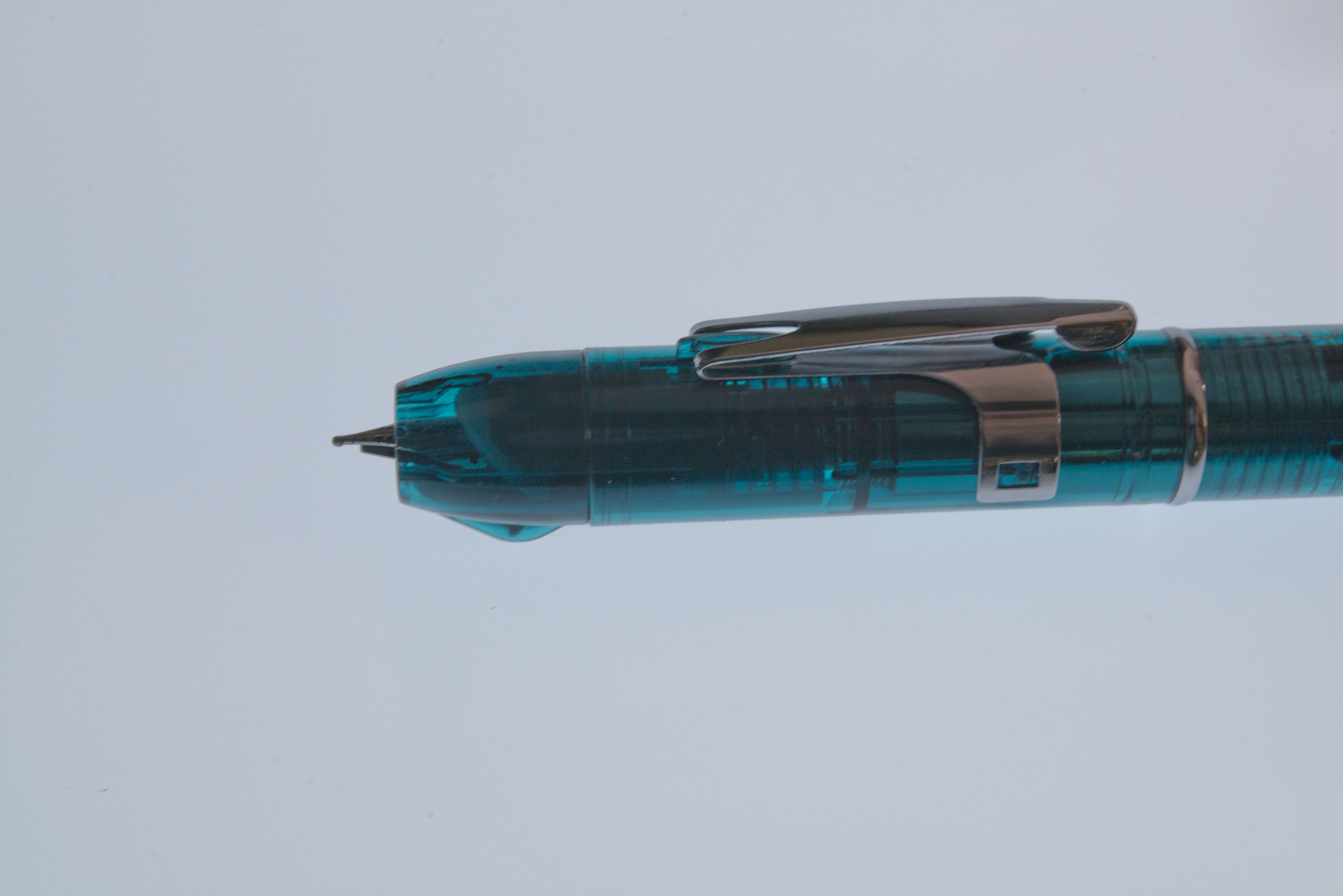 The opening mechanism is quite clever and as mentioned below, is unlike the Pilot one where the nib just pushes the trap open.  It’s actually part of the nib unit, where it becomes wider and metal, that actually pushes the cap component forwards until it reaches a inner nock that then rotates the actual cap forwards and down, where it becomes locked in the trap, allowing the nib to slide out unmolested.  Hopefully the photos either side of this paragraph (as opposed to my normal above only) help show that. 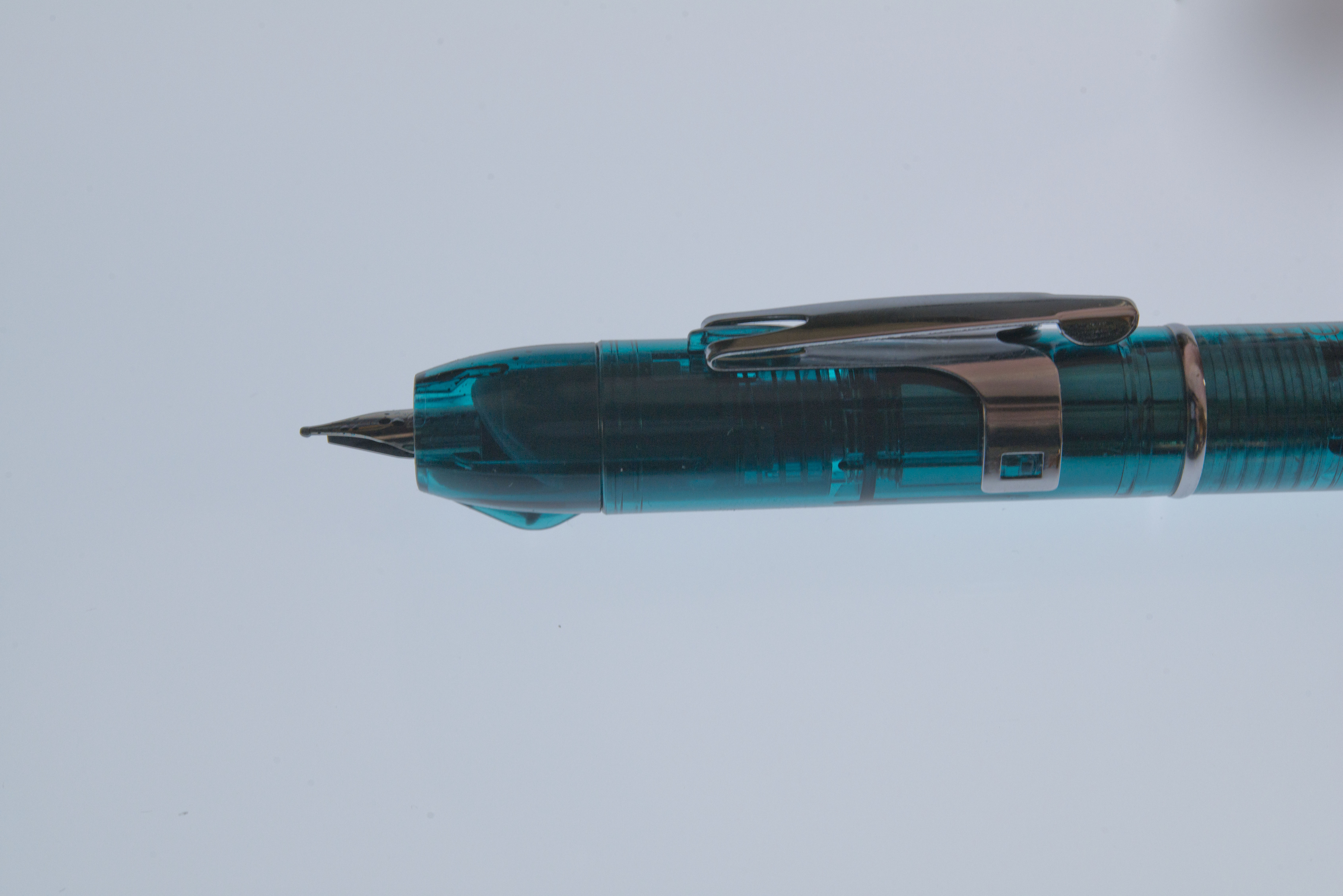 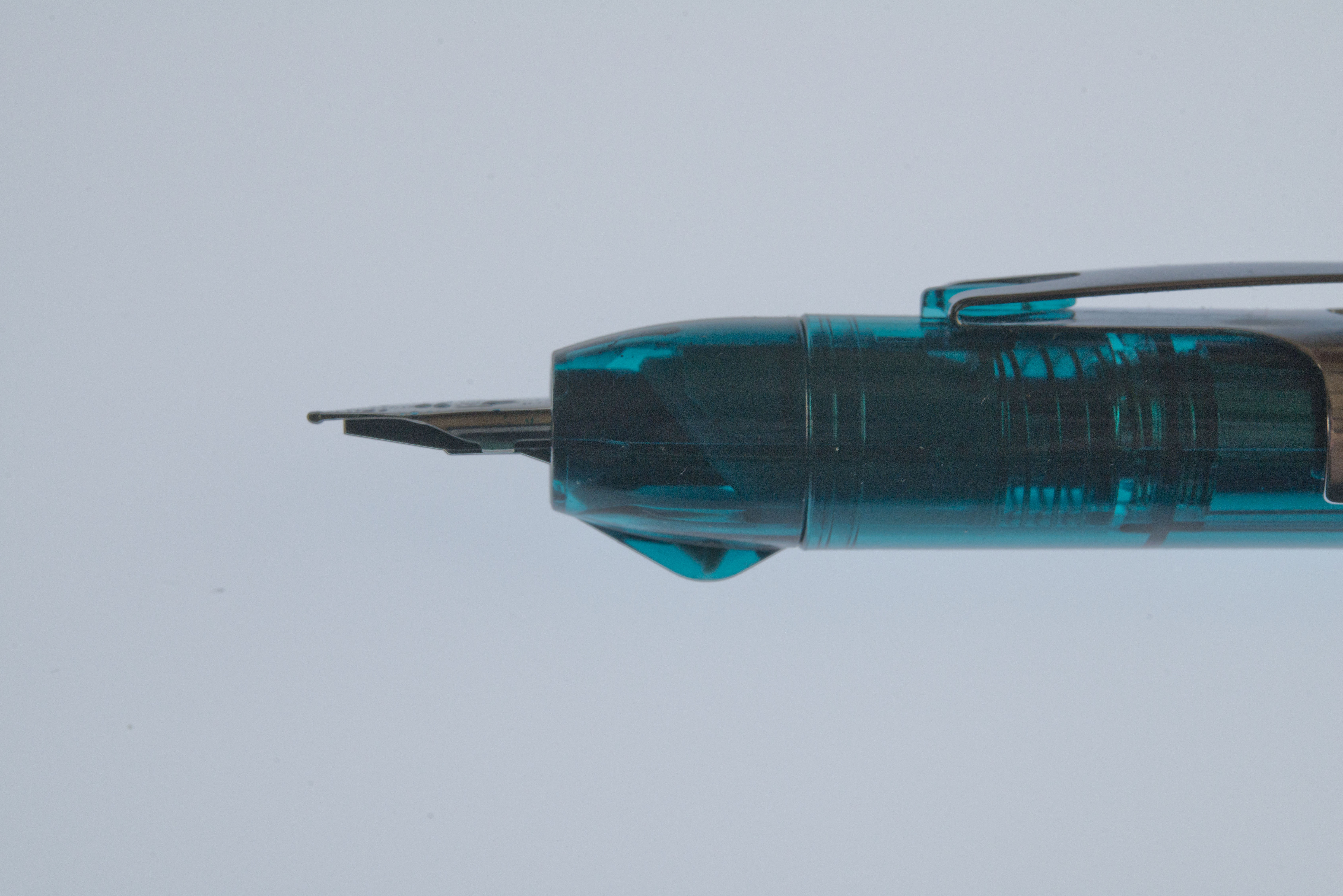 On cost I’m still in two minds.  You can get the Curdias for £75 from a number of retailers in the UK, or at least can while they still have stocks.  For a plastic bodied steel nibbed pen this may seem a lot, but then you are paying for the opening/closing mechanism as well, and it is far more complicated than the ‘nib pushes the trap open’ one found on the Pilots.  Often people will complain that you can get a 3776 Century for less and that comes with a gold nib, but you can only compare prices locally and in the UK those start at £120, so £45 more and upwards for a simple pen of the same material just with the nib being gold.  I guess what I’m trying to say is I still can’t personally decide if it is good value or not.  Certainly in a sale I would suggest getting one if you find the Curidas comfortable in the hand. 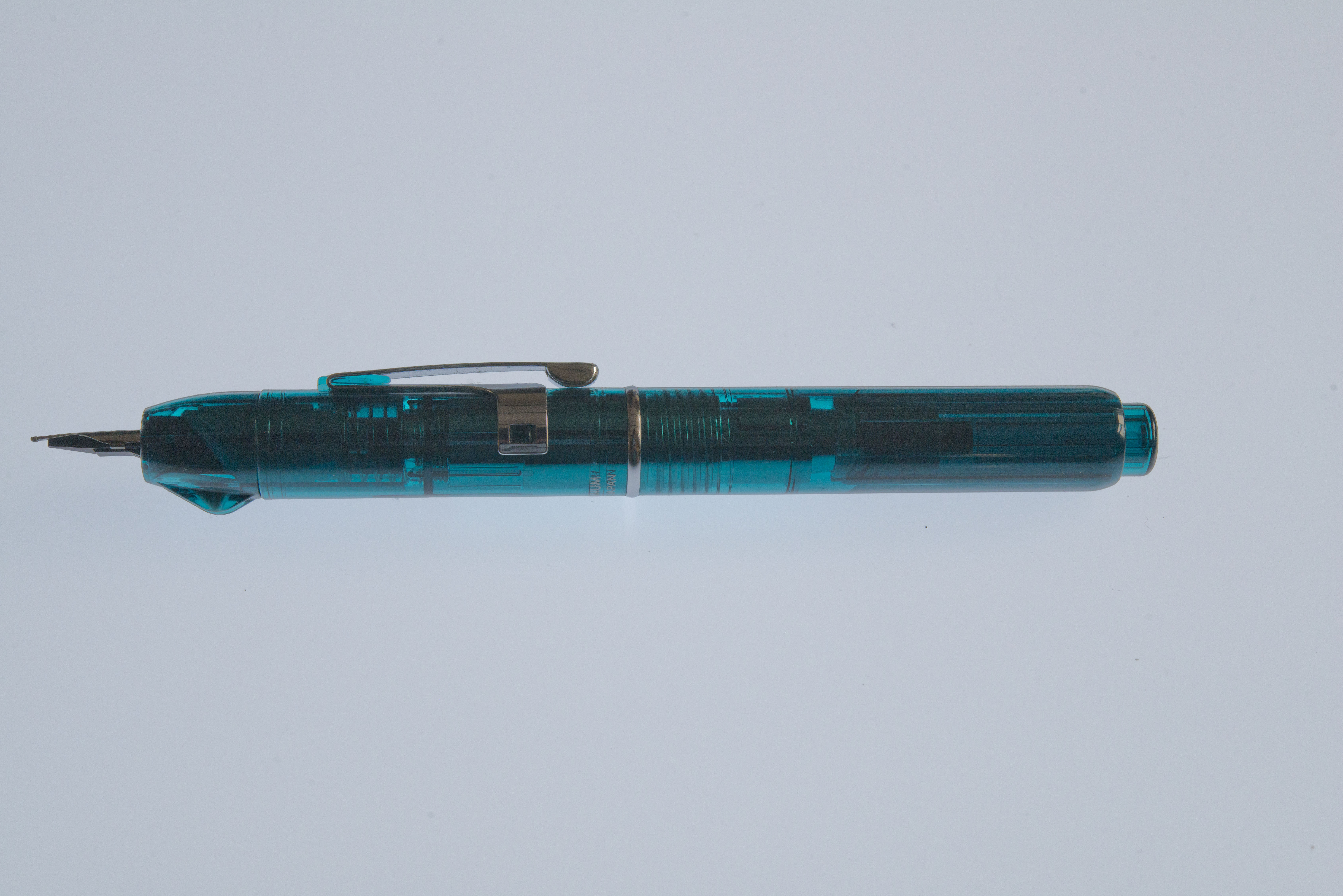 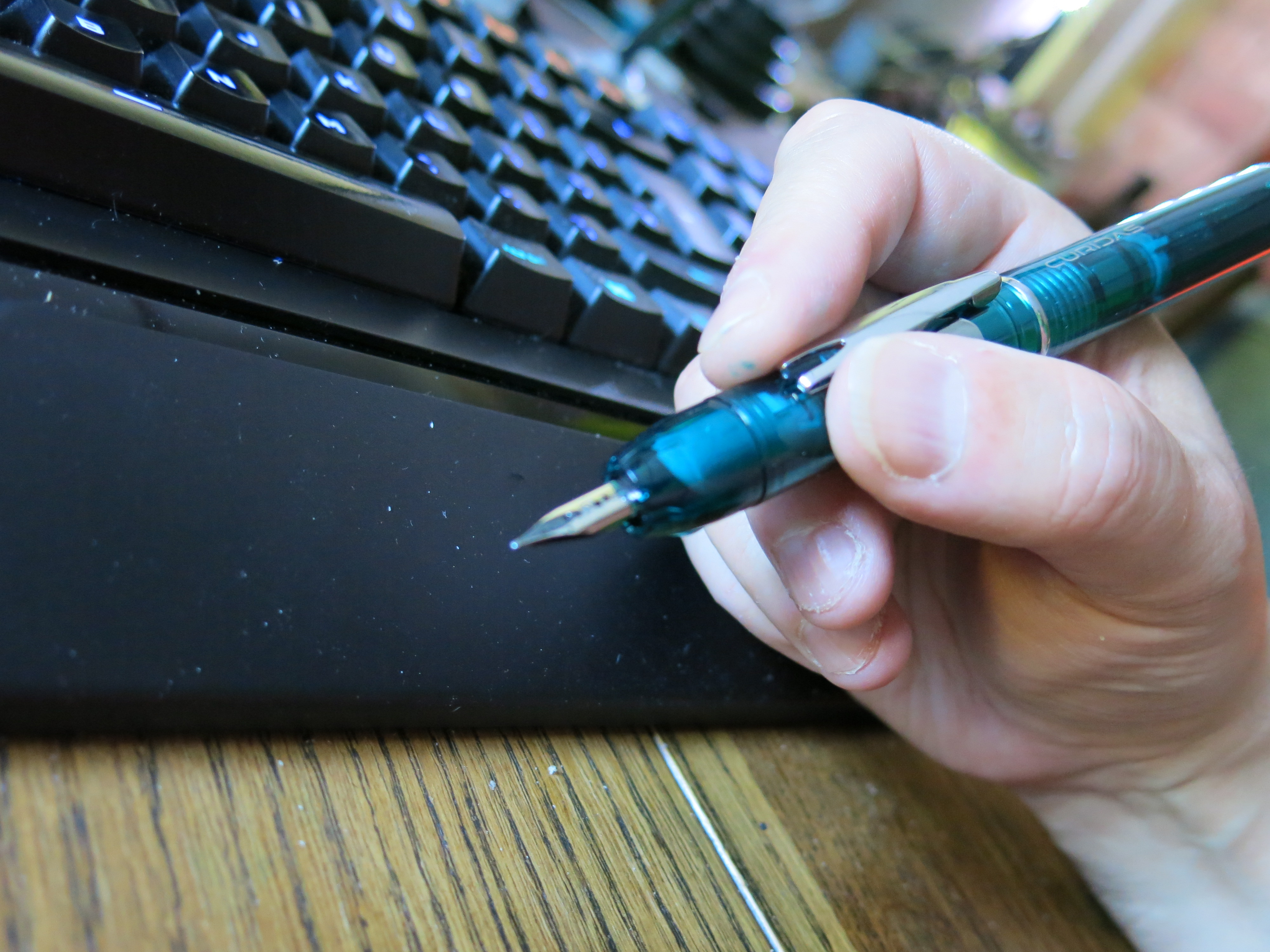 Several weeks on how do I now find it compared to it’s competitors.  I would say, for me, it is the most comfortable retractable fountain pen I own.  I have always found the VP/Capless to be too narrow and taper in too much for anything more than quick note taking, and while I’m happy to use the Lamy Dialog 3, it is heavy and does take a second or two to balance in the hand.  I also use a traditional tripod grip so the clip does not get in the way, plus I find I naturally hold the pen far enough back that I do not catch the lid trap roll stop.  I have tried holding the pen across the clip and actually found it to be relatively comfortable, the reason being the clip is wide and flat.  Again I would suggest trying one before buying if the clip has been the issue for you on a Pilot VP.

Again, with the clip, following the instructions and using the supplied tool I was able to remove it with no effort within just a few seconds.  Putting it back on, however took a while and was a PITA and also did need the tool.  The problem came that you need to get the front of the clip to line up in to a slot in the upper plastic protrusion on the pen while also getting the sides over the securing lugs.  The tool works well when pushing up to remove the clip, but this actually makes it a lot harder to secure the clip when trying to put it back in to place.

Am I happy I bought mine.  Yes.  I will keep an eye on the cracked feed, but if it gets no worse I might just keep with it.  If it does then Cult Pens have already said they will replace it (within reasonable time obviously).  Hopefully Platinum will be able to resolve the issues. 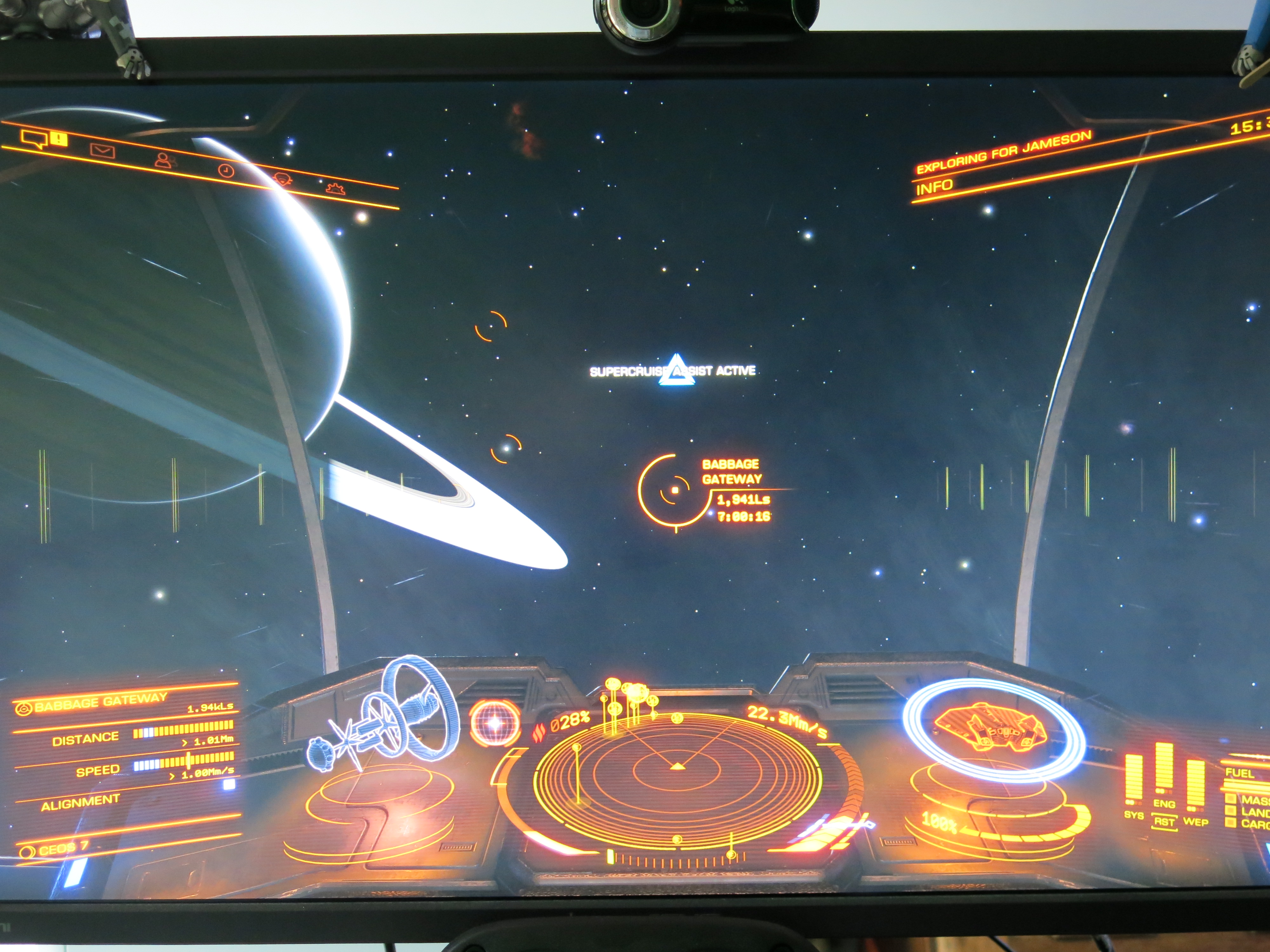 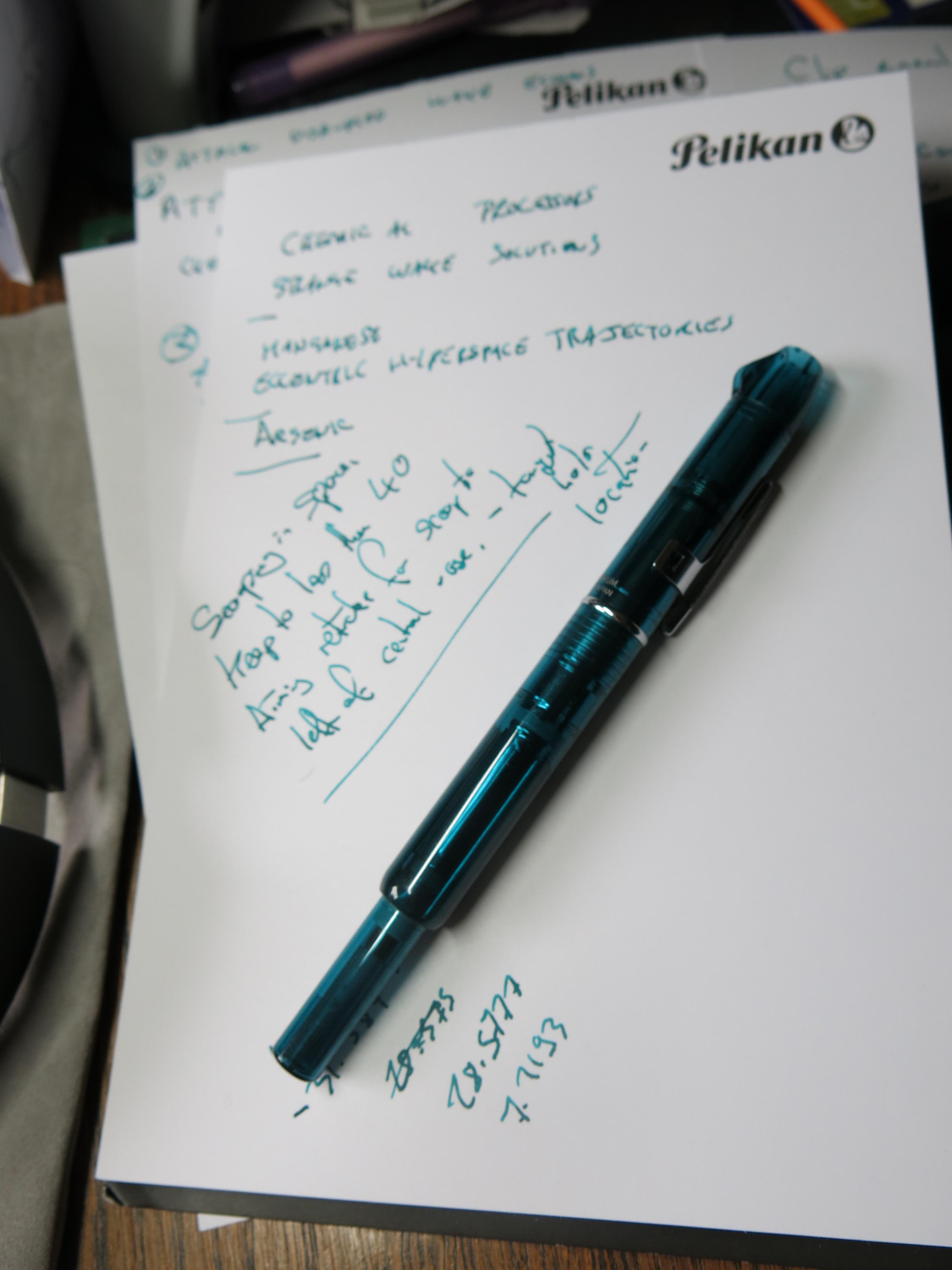