In the last few years Leonardo Officina Italiana (to use their full name) have been building quite a reputation through their Momento Zero, Furore, and Momento Zero Grande models.  All are of the same basic design with the differences being in the finials and size.  Now in 2020 they have released a new model, the Messenger, with just 366 examples being made in each of five translucent colours.

It is no secret that I’m a big fan of the Momento Zero.  Sure I avoided the nib issues of the early pens, however from trying ones belonging to friends at pen clubs I knew it would only be a matter of time before I got my own, and this I did with my Blue Hawaii example, which was a stalwart of my daily carry collection for a long time.  The pictures of the new pen caught my eye, and with the March 2020 London Pen Show approaching, I knew it was one of the things I would be looking out for.  Due to the Covid-19 issue starting to pick up only one of the possible vendors of this pen was able to attend, Pen Venture from Romania (run by Insta.Emy). 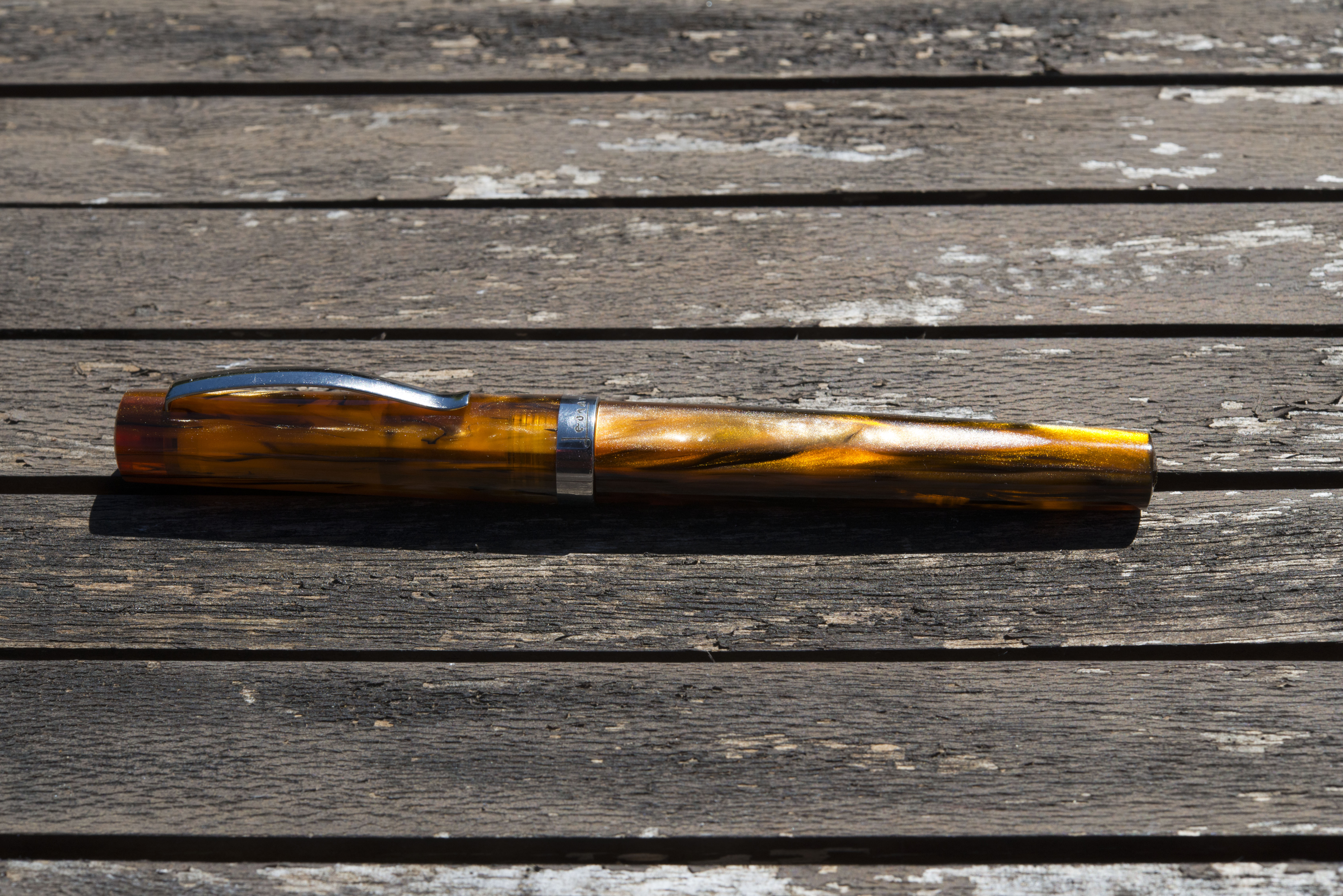 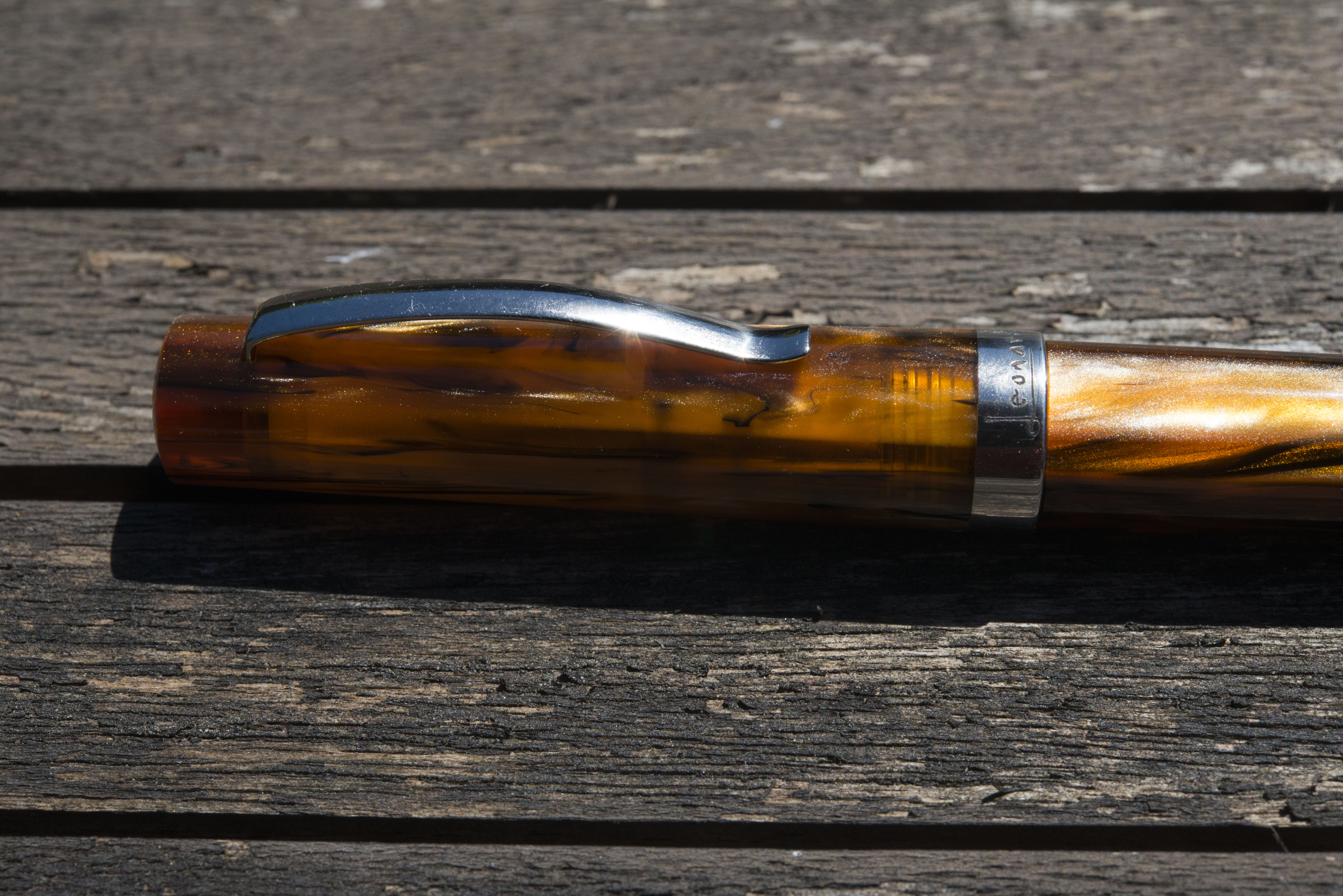 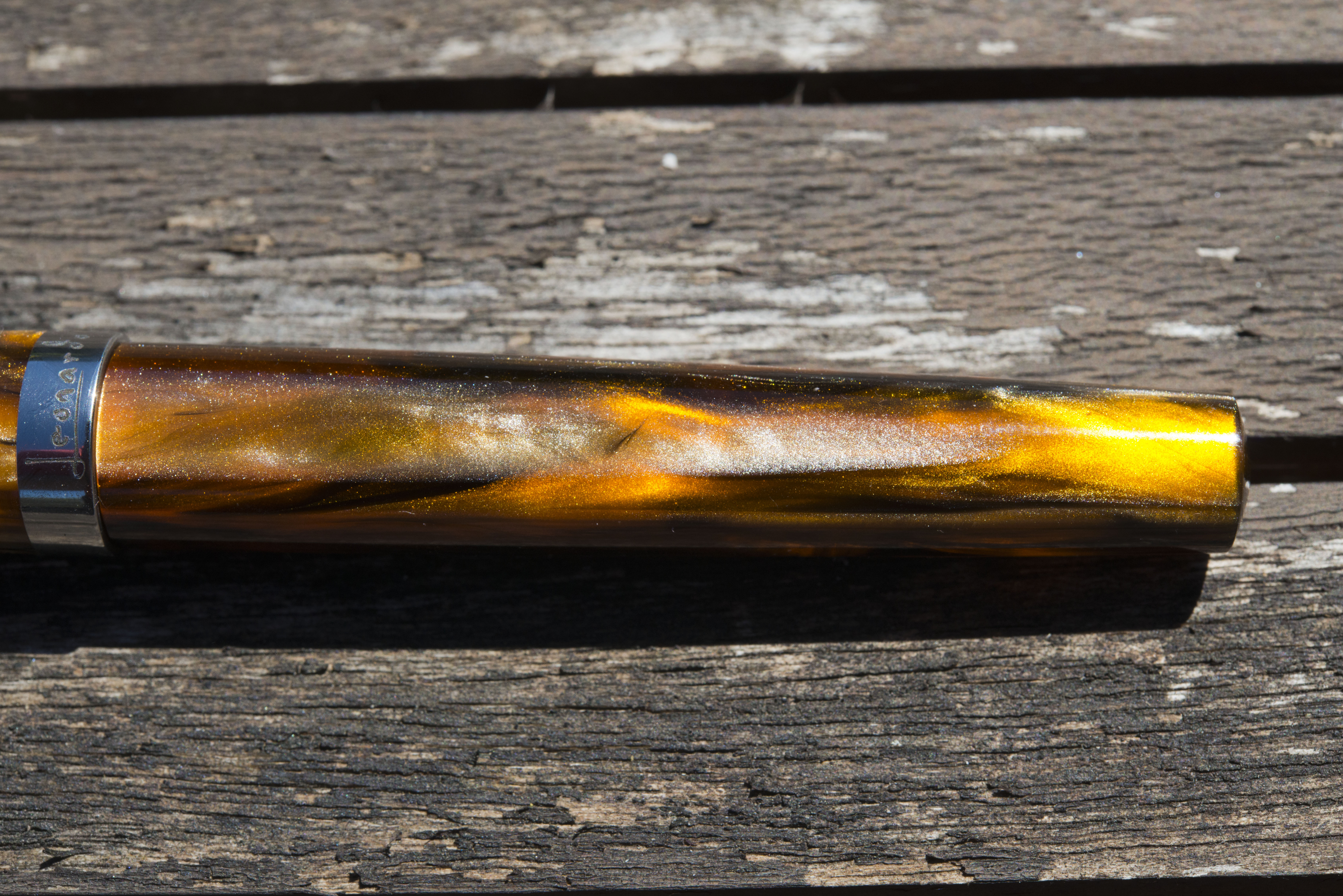 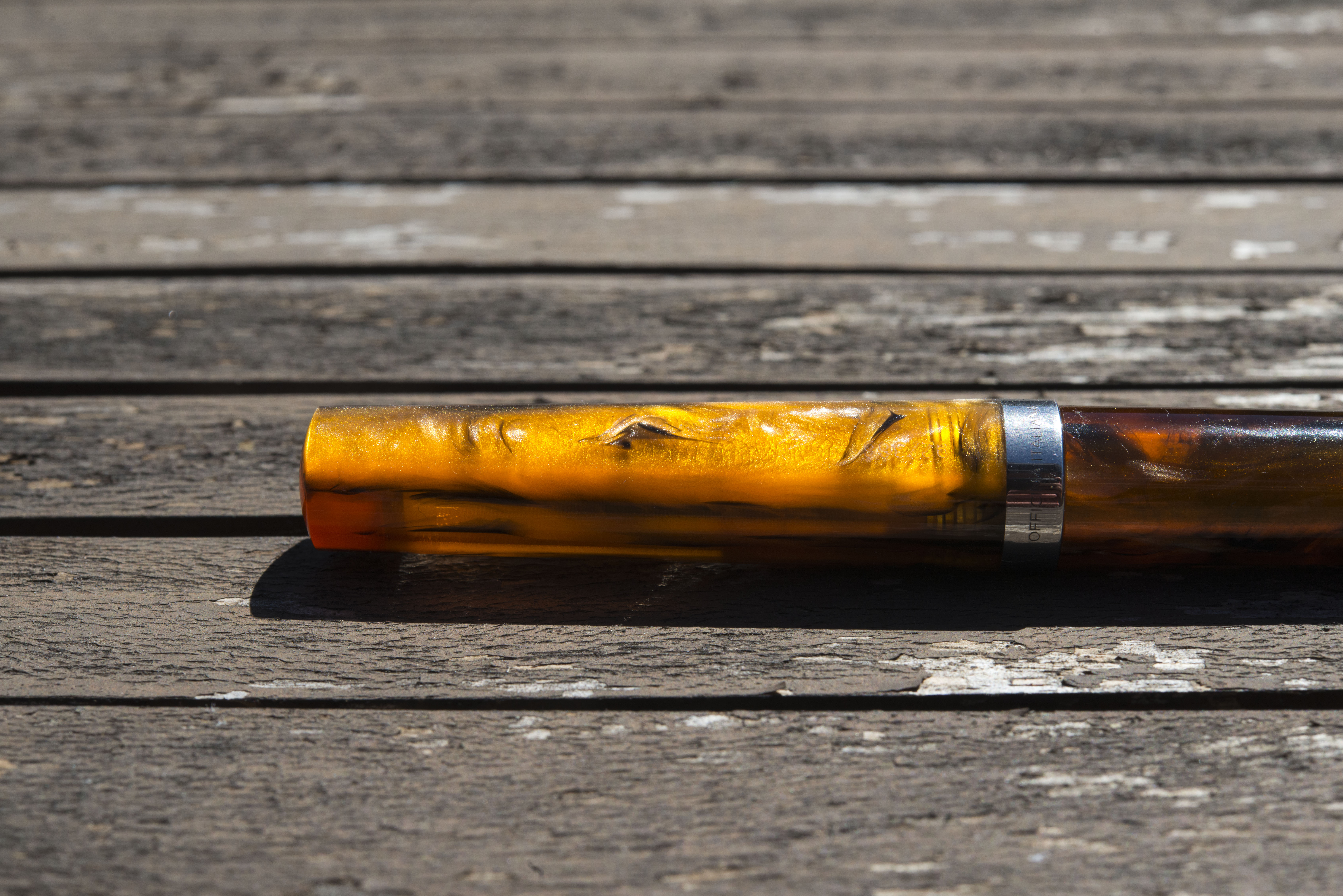 First impressions at the show were mixed.  The marketing shots showed five different colours/finishes, each with exciting highlights and markings, but under the artificial lighting of the Bloomsbury Hilton most just looked flat and bland.  The one that did not was the caramel version which, even in those circumstances, displayed much of the beauties of the material.  My mind was set on which I would buy.  Nib wise there was only an EF left in that finish.  Emy did have spare nibs to swap out (and was doing so for others) but I decided after a dip test that I have very few pens for small annotations and so this would be ideal, and for me a different nib size to go for. 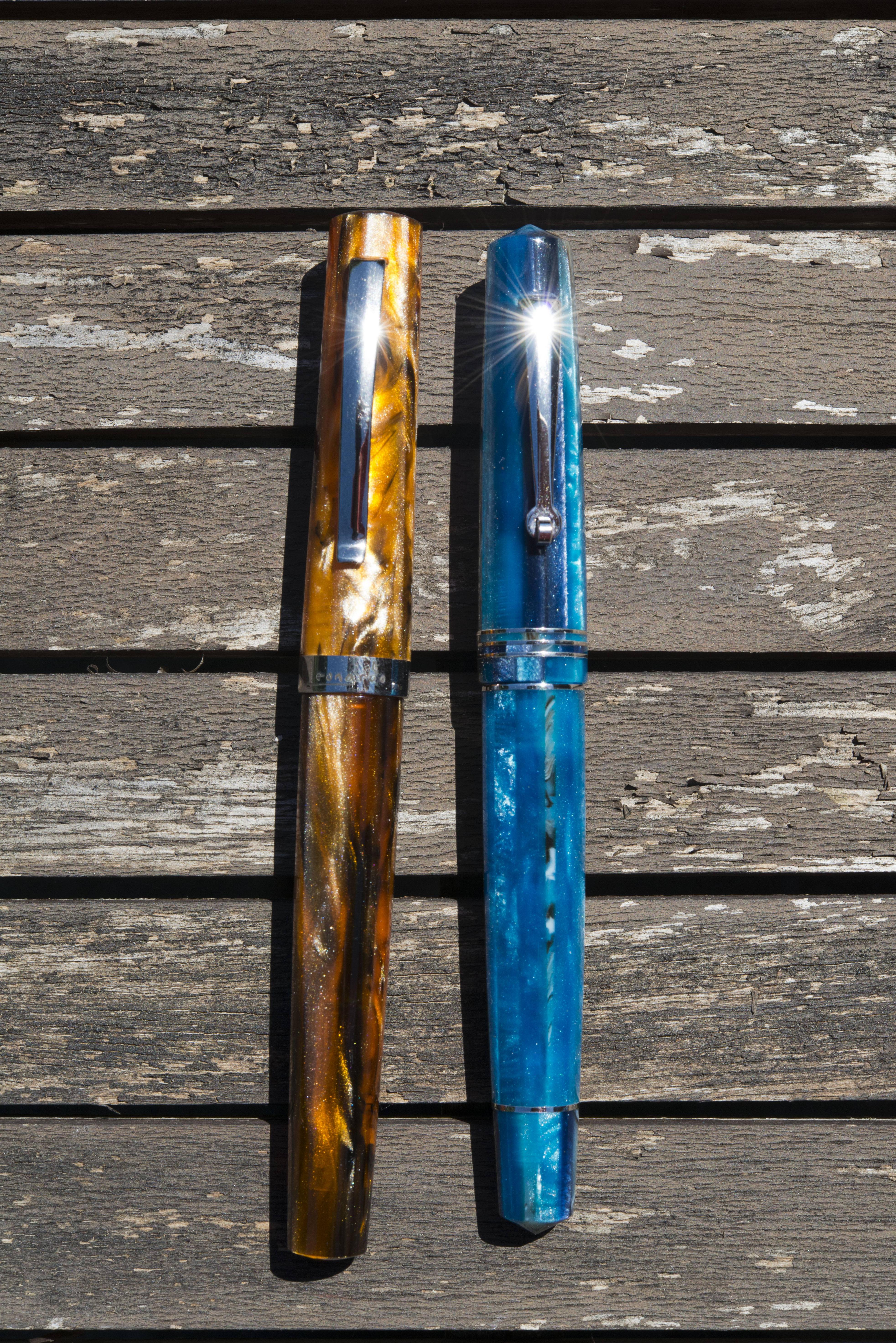 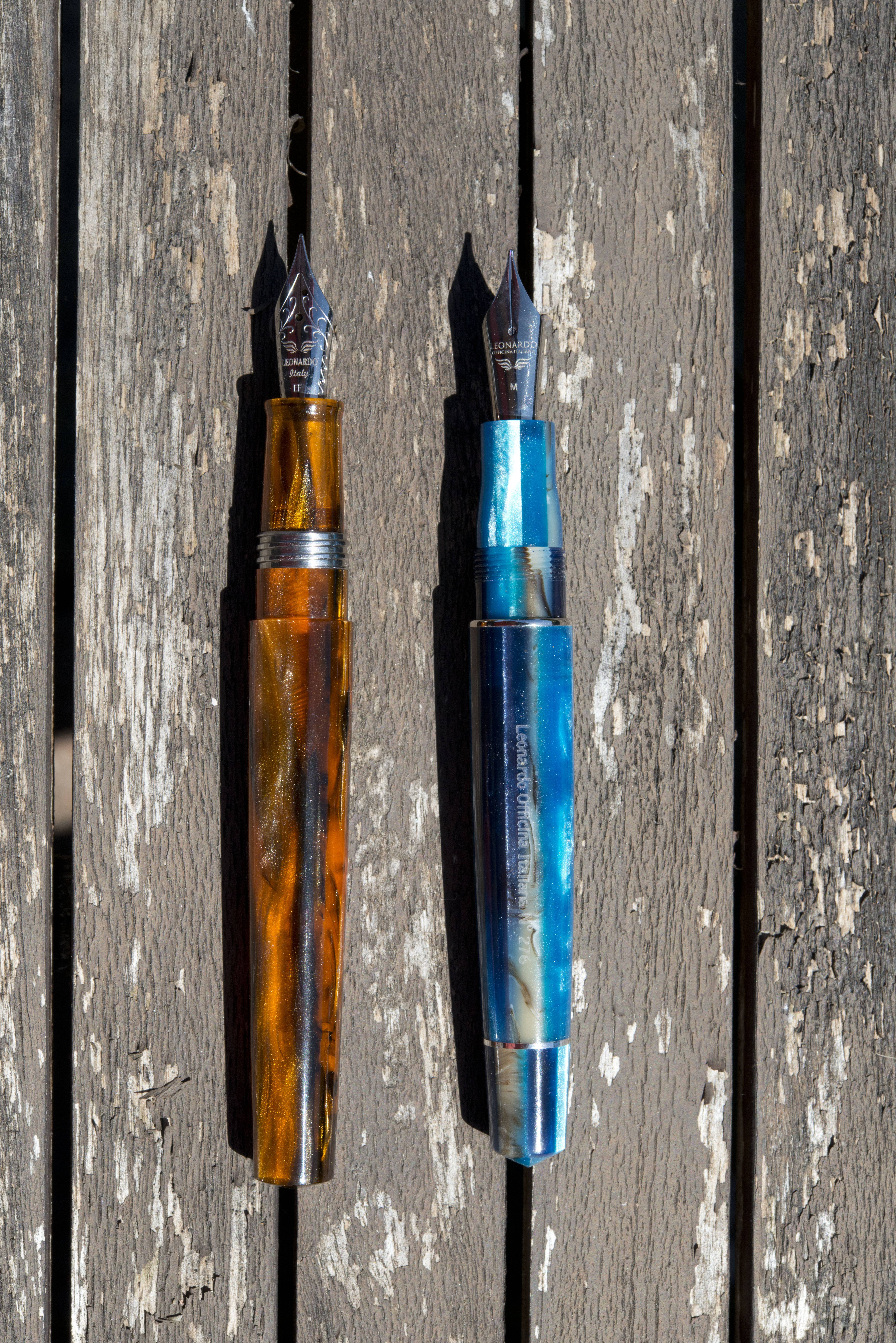 Any comparisons with the Momento Zero/Furore start and end with it being a fountain pen with a converter included.  Beyond that all is different.  It is longer, slightly narrower, with a different cap and different nib, using JoWo not Bock for this model.  Additionally the Leonardo grip section I find so comfortable is gone with a more traditional short design being used.  This has it’s pros and cons.  On the plus side, Leonardo have stepped outside of the safe zone to provide something slightly different from their norm.  On the down side even with the little touches such as the cap band and the placement of the metal capping threads, the pen actually looks rather generic especially when capped.  Arguably it is the acrylic that makes the difference, and with the caramel that means bronze, orange and dark brown streaks and shining areas of chatoyance. 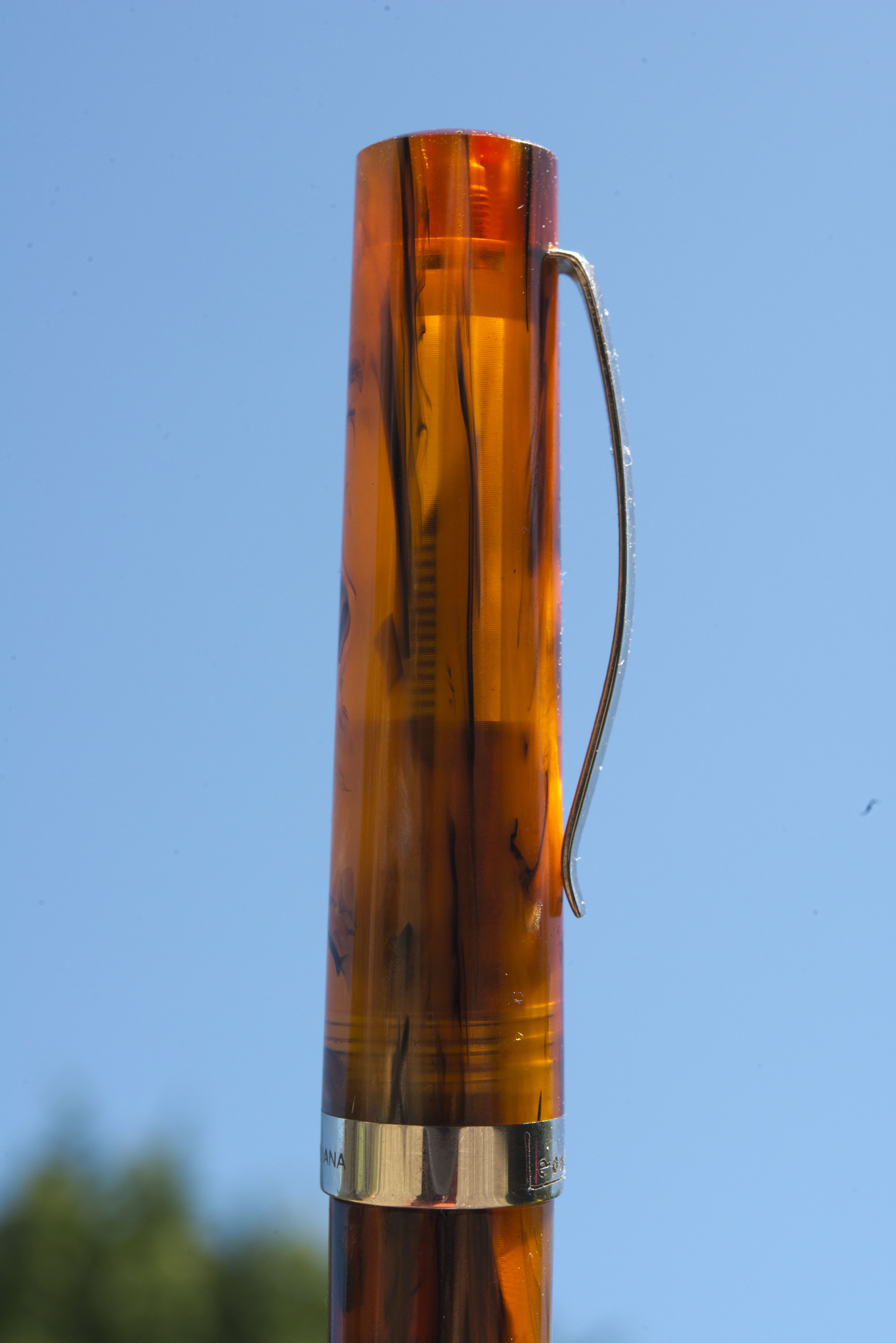 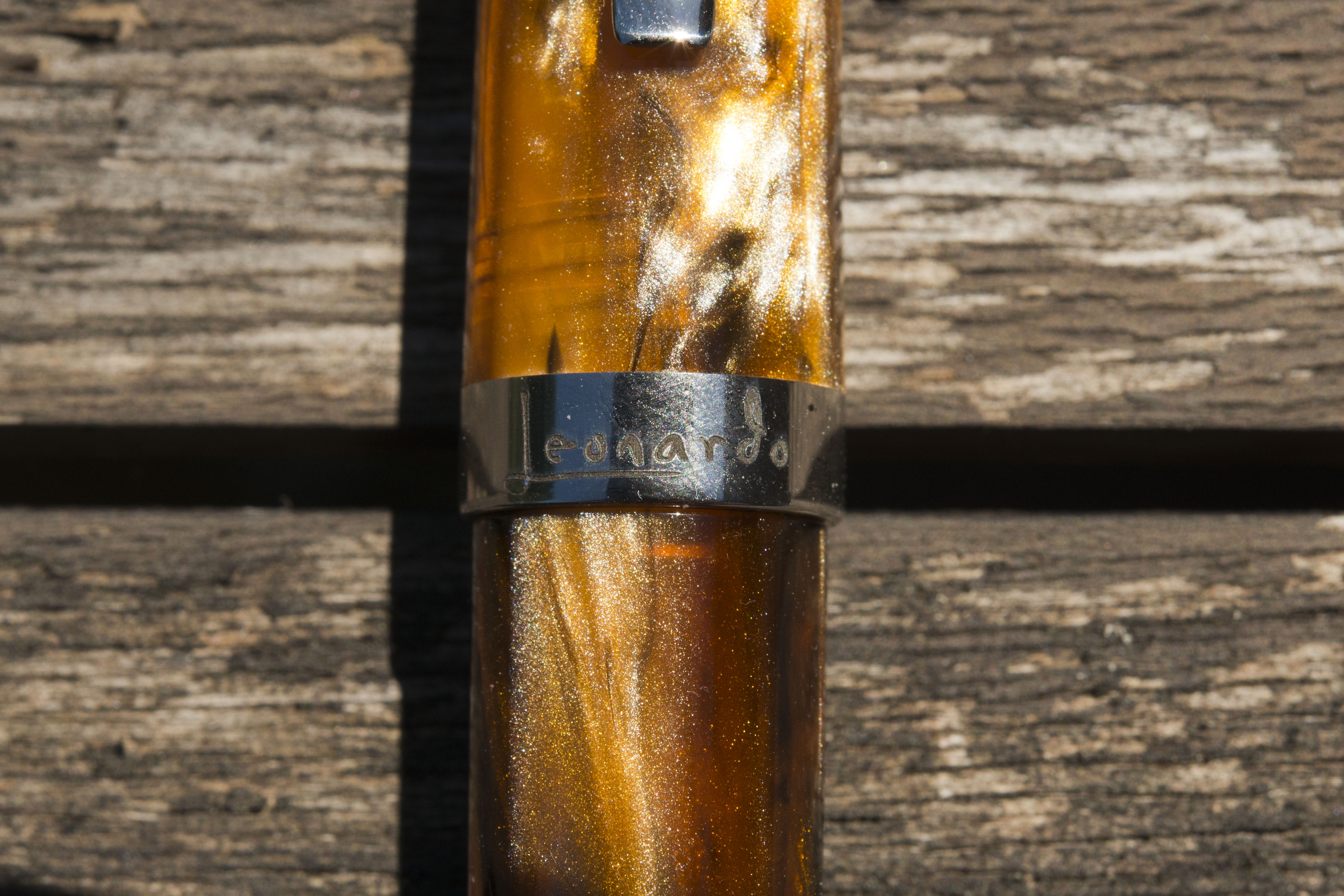 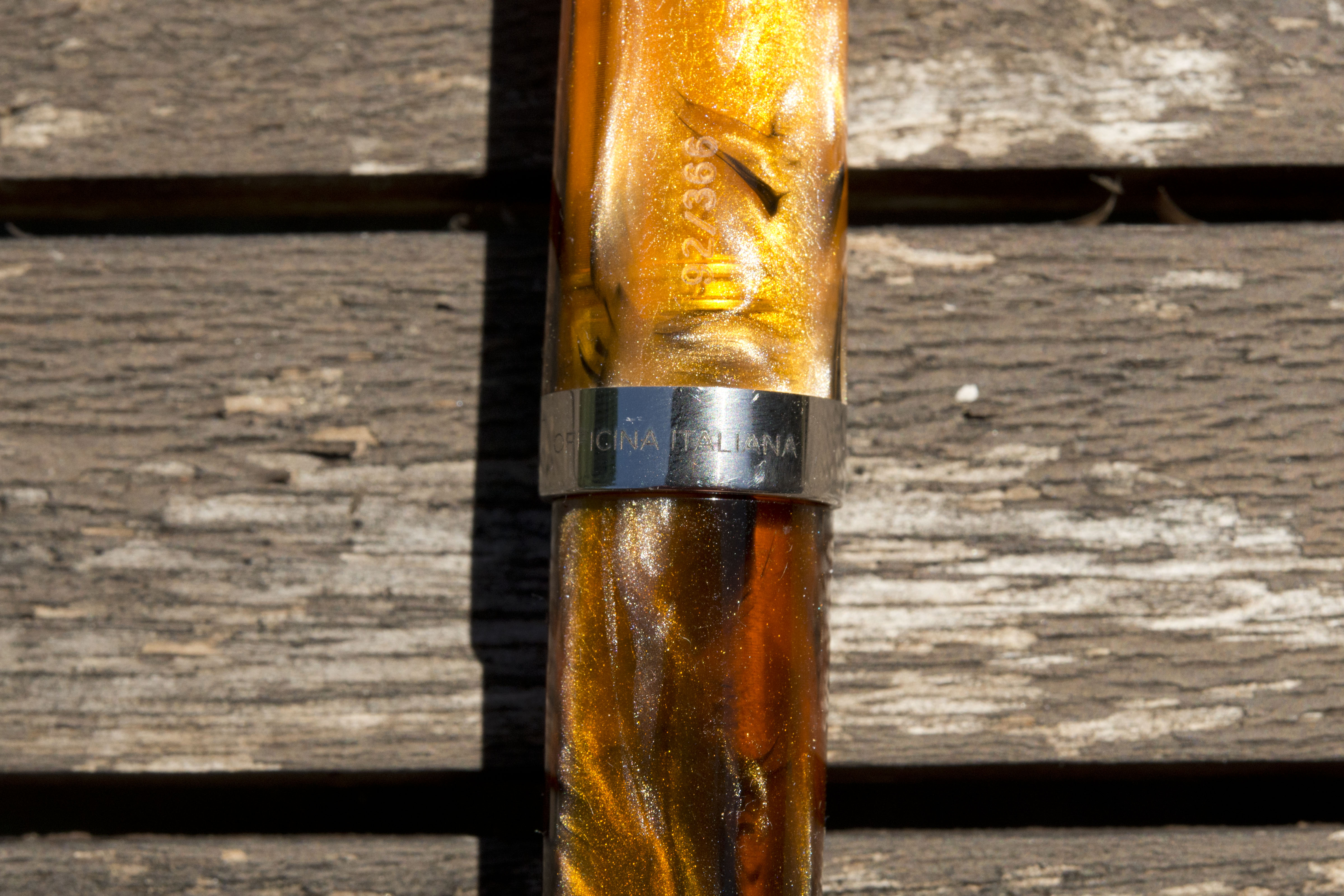 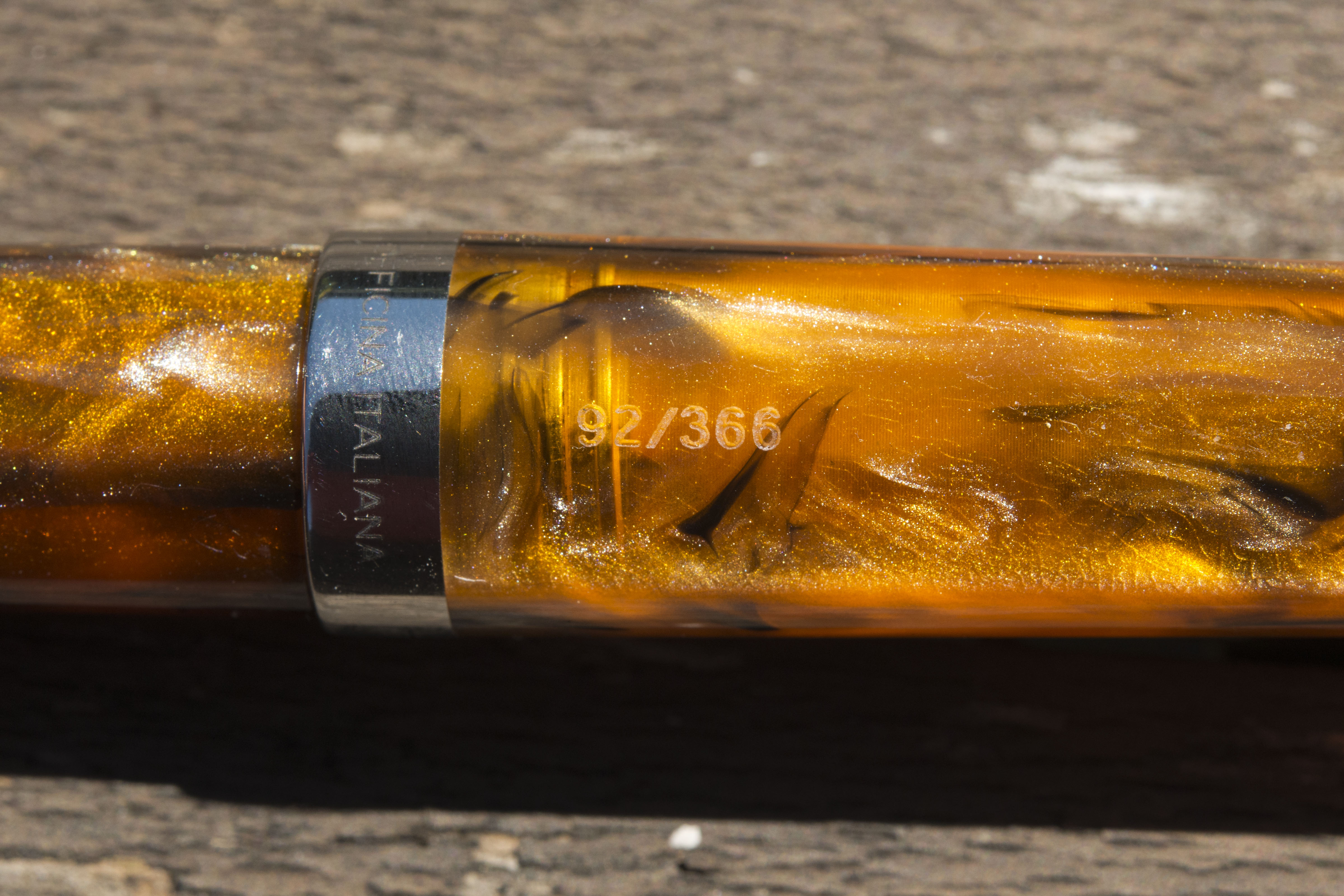 The cap is quite neat in appearance.  An effective though simple clip along much of it’s length and a single wide band at the bottom with Leonardo on one side and Officiana Italiana on the other.  The only other marking is the limited edition number on the opposite side to the clip.  One thing of note, the band sits over and around the acrylic, so should protect the end from chipping/cracking if dropped, however it does mean the threads on the inside are cut in to the acrylic. 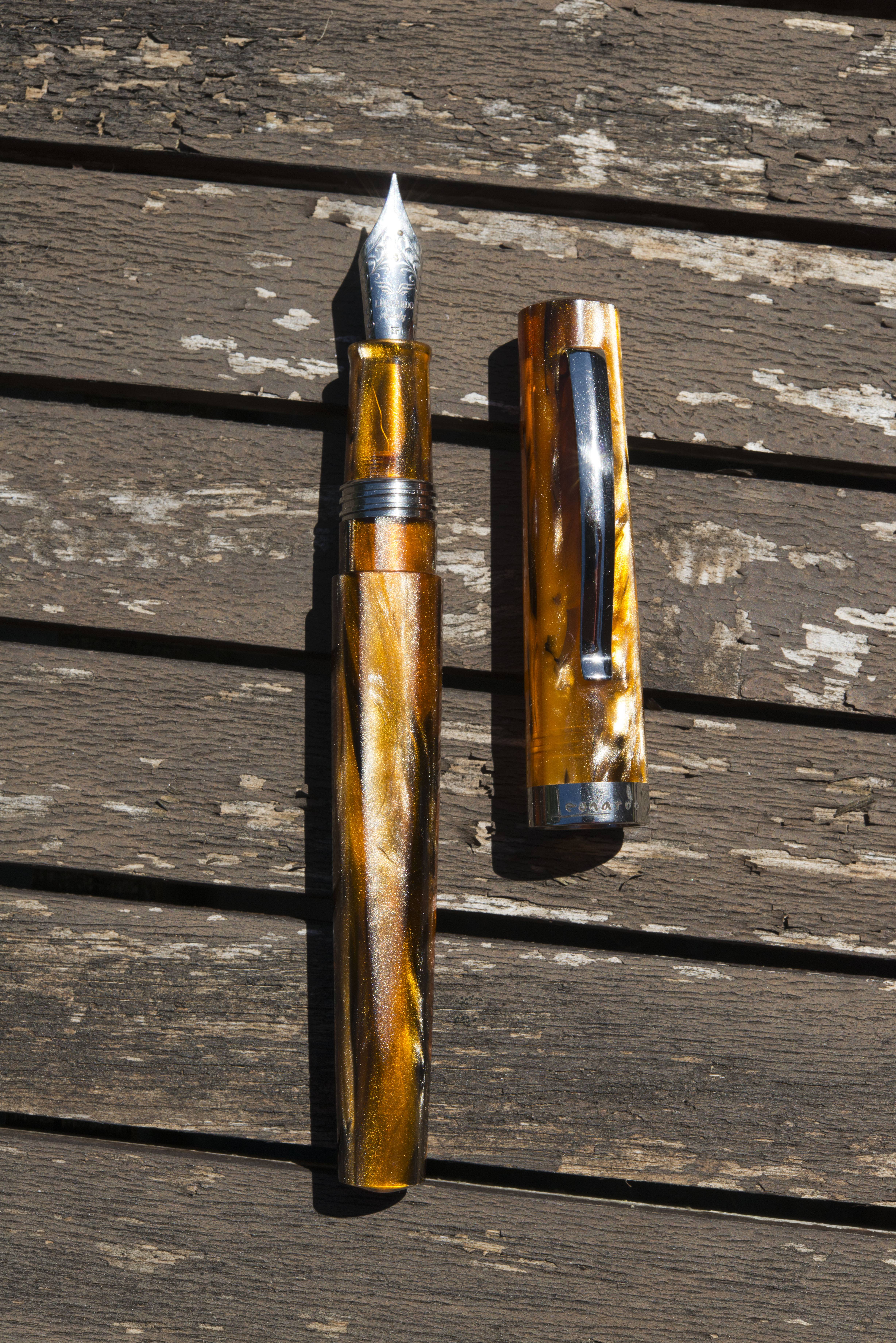 The grip section is where this pen is different from others.  While it might have a short stretch to the cap threads, the barrel step is actually further back.  This provides a greater area over which to hold the pen.  While the threads are metal, they are wide and so soft to the touch with the result you almost stop noticing them after a while, however only almost.  It is not uncomfortable, rather more feeling like an area of high grip to stop the pen slipping in your fingers.  The downside for me is that the metal rests on my lower finger and I do find it can become uncomfortable, more so than the back of my thumb being pressed in to the step.  With the latter, it is not sharp but you can feel it.  The net result is I find I have to keep adjusting my grip to find a comfortable position, I can’t just pick up the pen and write with it – the complete opposite to the Momento Zero. 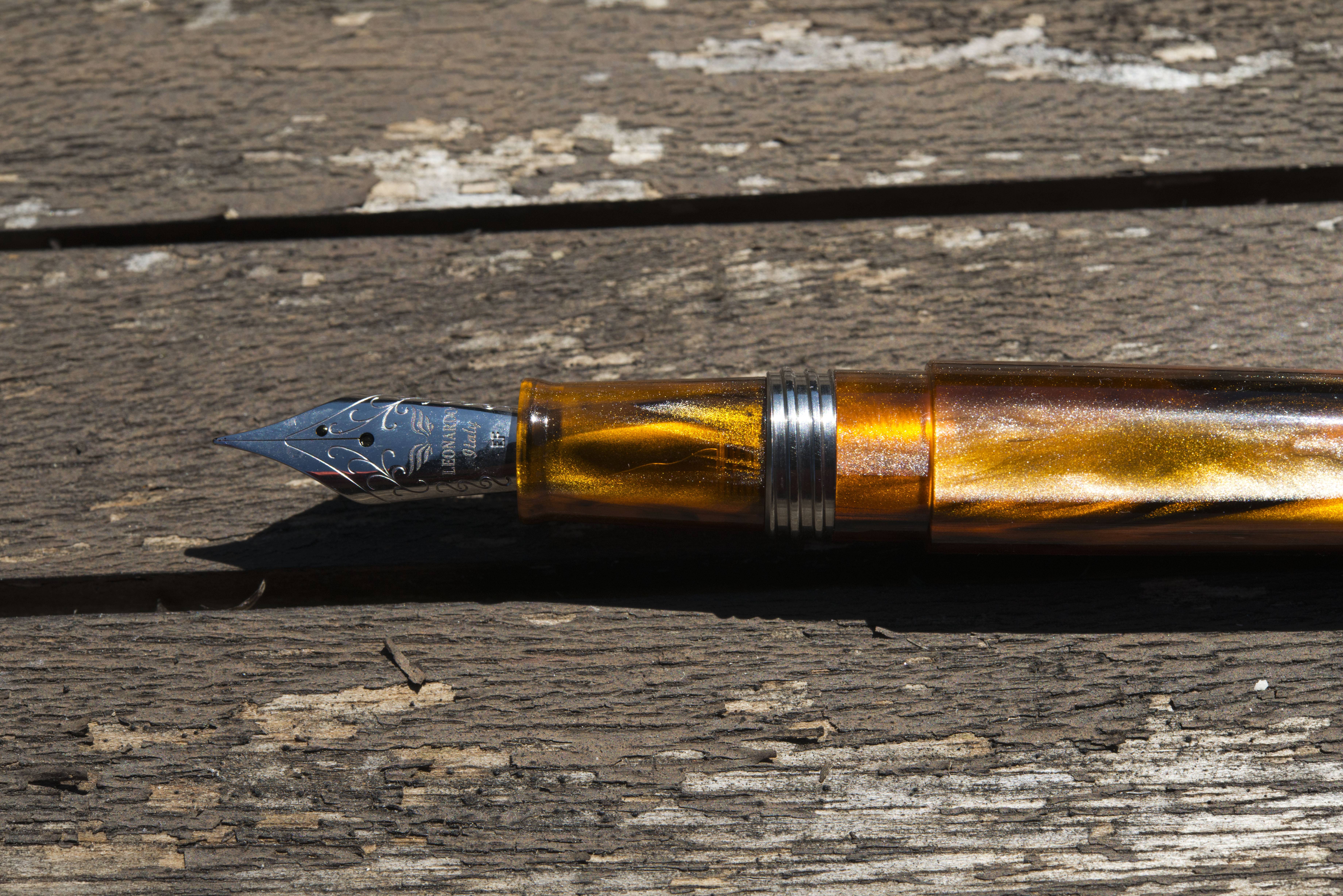 The whole design in front of the step is a little odd.  It looks neat and slightly different, but the section actually screws in to the body in front of the threads, not at the step.  Also the capping thread being metal means it winds in to acrylic on the cap.  I’m not so worried about material wear, however I did find problems with sealing.  Another thing about those metal threads is, like the cap ring, they sit on the acrylic not instead of, so the inner threads are plastic where as the threads on the inner section are part of the converter holding unit and are metal.  I can’t see this being too much of an issue unless you over tighten after a fill, at which point I can see cracking being a risk. 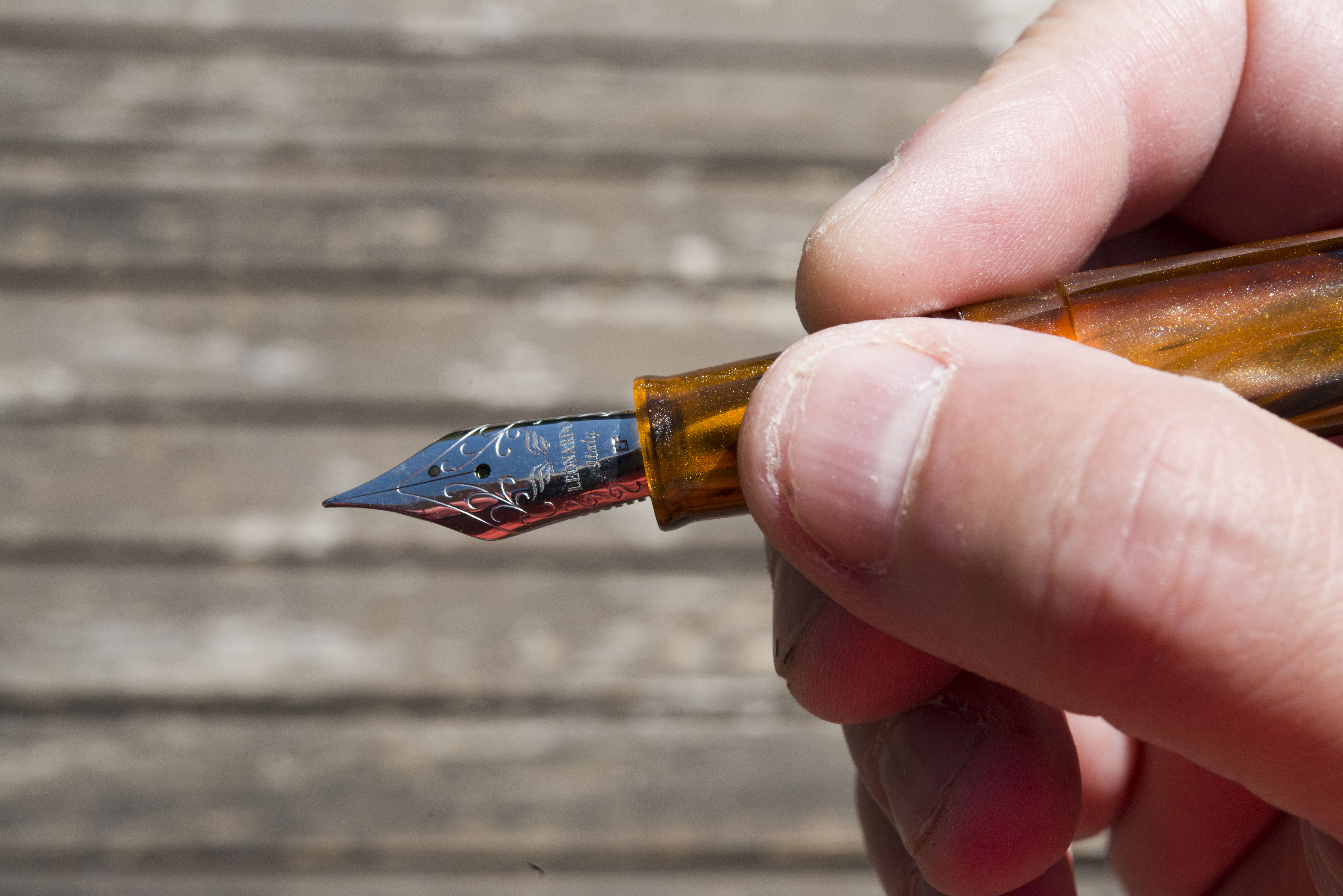 In the hand, comfort factor of the fingers aside, it is a well balanced pen, possibly due to the metal threads.  Posting the cap does add a little back weight, but not as much as you might expect. 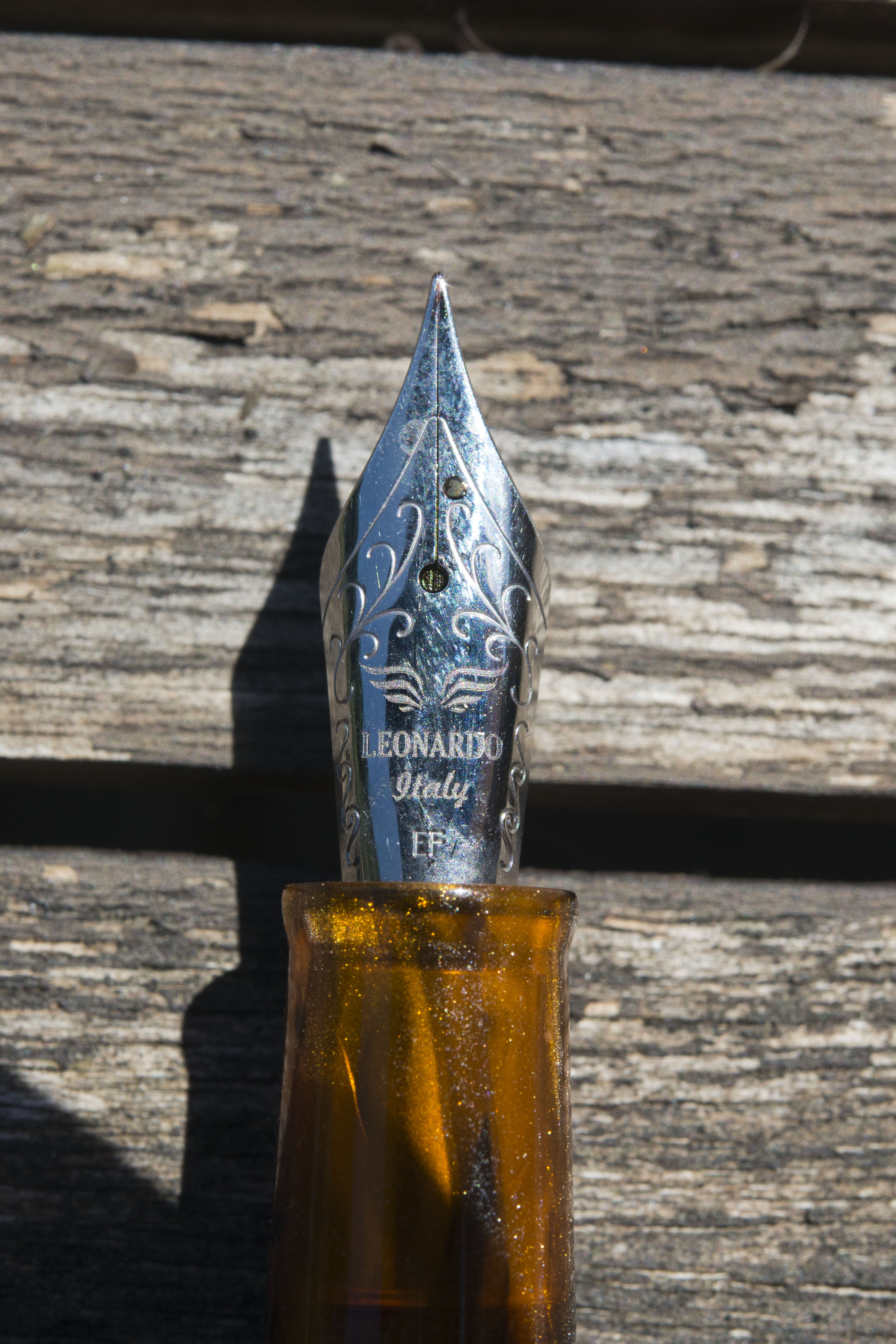 Why the nib is a JoWo unit, friction fitted not screw in, I’m not sure.  On all their other pens you get their own specific Bock made nibs with clean Leornardo branding (no normal Bock adornments).  Here we have a stock JoWo nib with the branding laser engraved on it.  Nothing wrong with this of course, and the pen itself is comparatively cheap, so perhaps that was one way to help bring the price down.  Writing experience wise, it is a stock JoWo EF nib and provides no surprises nor gremlins. 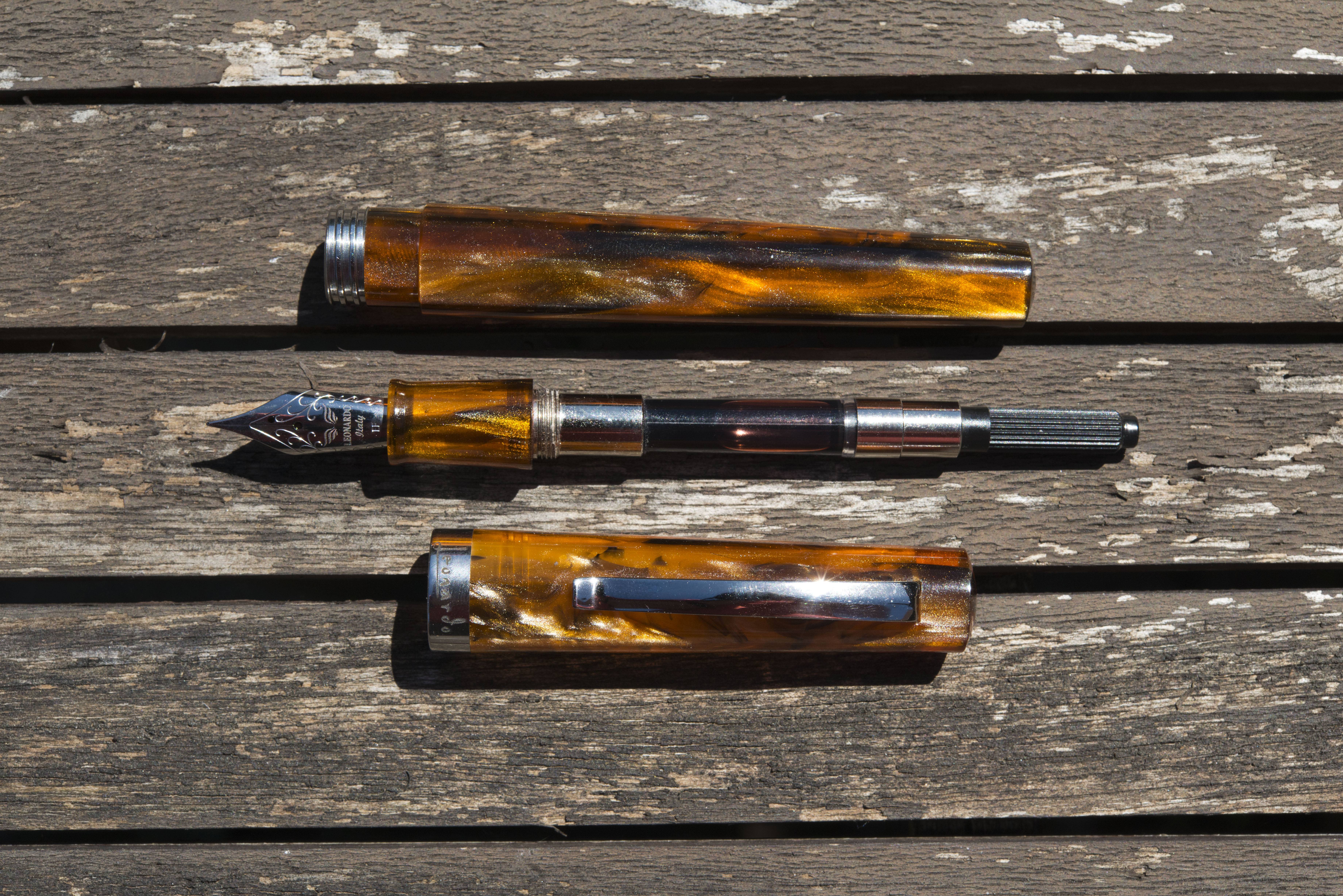 The filling system, as previously mentioned, is the Schmidt K6 screw in version of the standard international cartridge converter.  While unbranded I do note that on my Momento Zero the Leonardo markings are on the additional metal winder cover/extension, not the converter itself.

I would like to say the ownership experience has been great aside from having to shift the pen around in the fingers to get a comfortable grip, but alas that has not been the case.  My major issue has been nib sealing.  My first two fills of ink each evaporated in just a couple of weeks.  At first I thought this was a fundamental flaw with the design of the cap threads, and to be honest I’m still not fully convinced it is not, however my third fill has been fine.  Remember this is an extra fine nib, so even with lots of writing its ink usage will be slow.  I’m hoping it was just machining oils/crud on the threads stopping the seal, however if this is the case then potentially finger grease over time could cause the problem to reappear.  We will see once the weather becomes hotter.

Price wise this pen is actually quite good value at €148 especially considering it is a limited production run of just 1544 pens.  While it is the same price as this is the early Momento Zero models, the more recent ones and the Furores go for €178.

So am I happy I bought it?  Time will tell.  At first I was not and I still need to get used to holding it.  However it is an attractive pen to look at and the translucent caramel acrylic does zing and works well in any lighting (not just marketing shots). 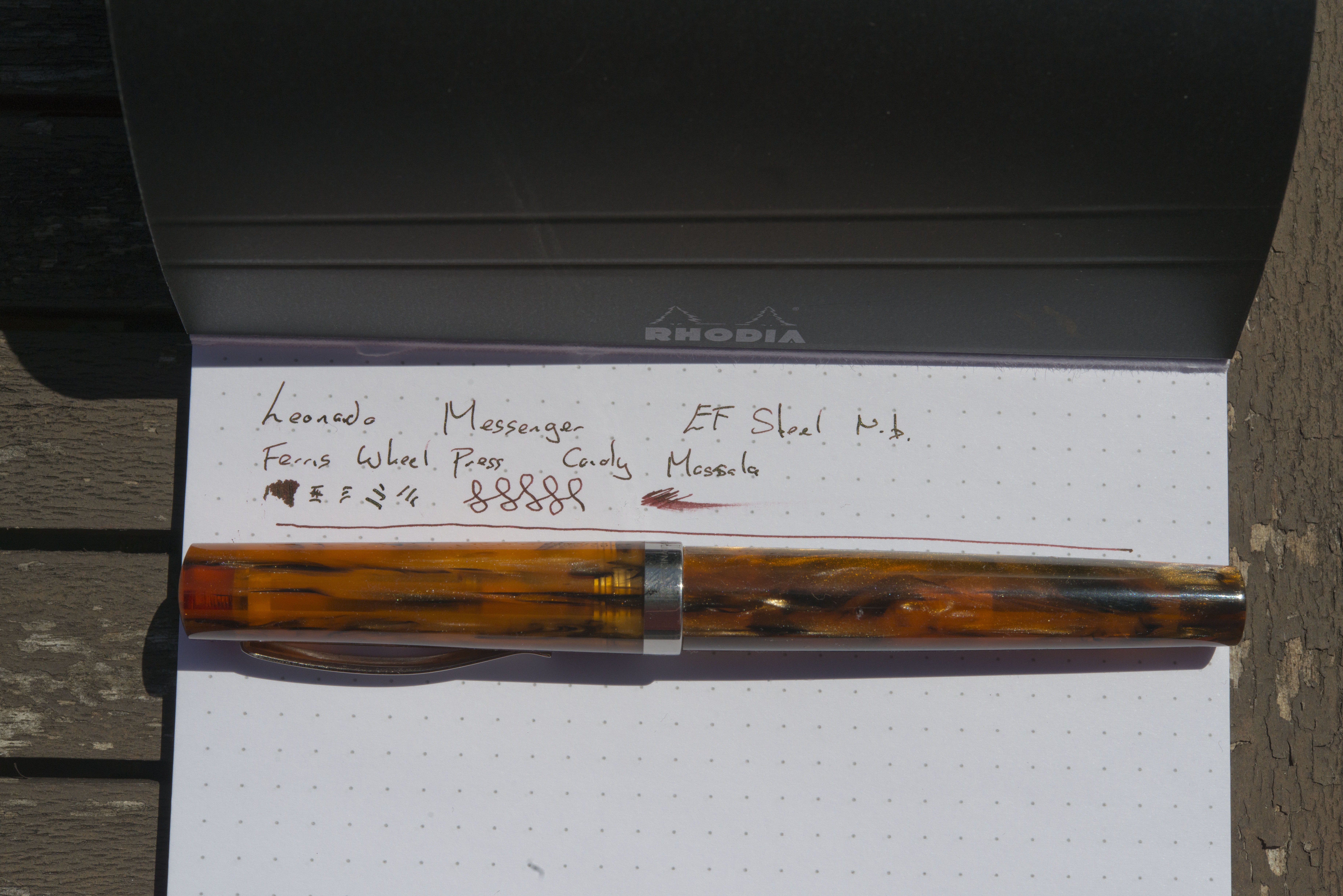 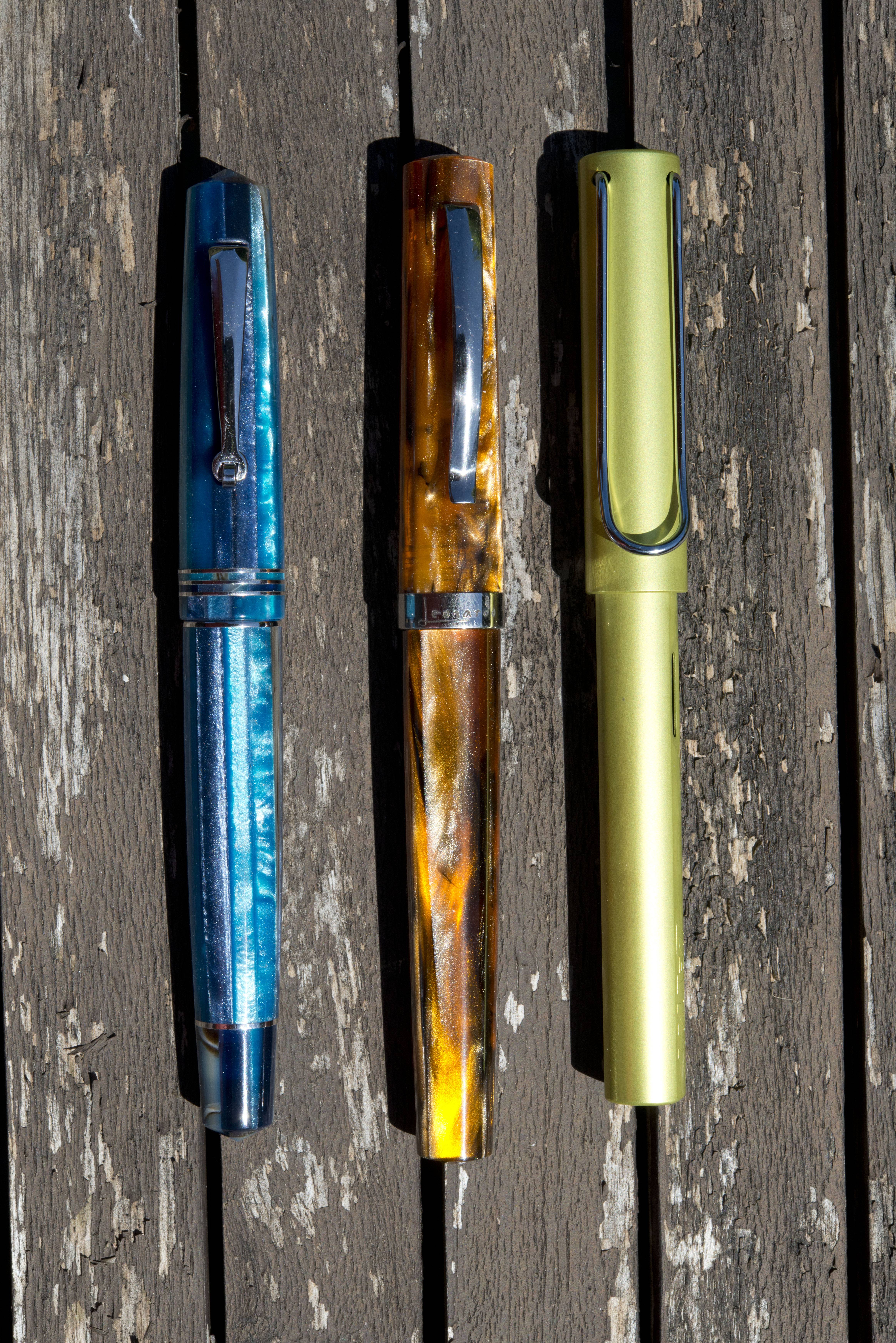 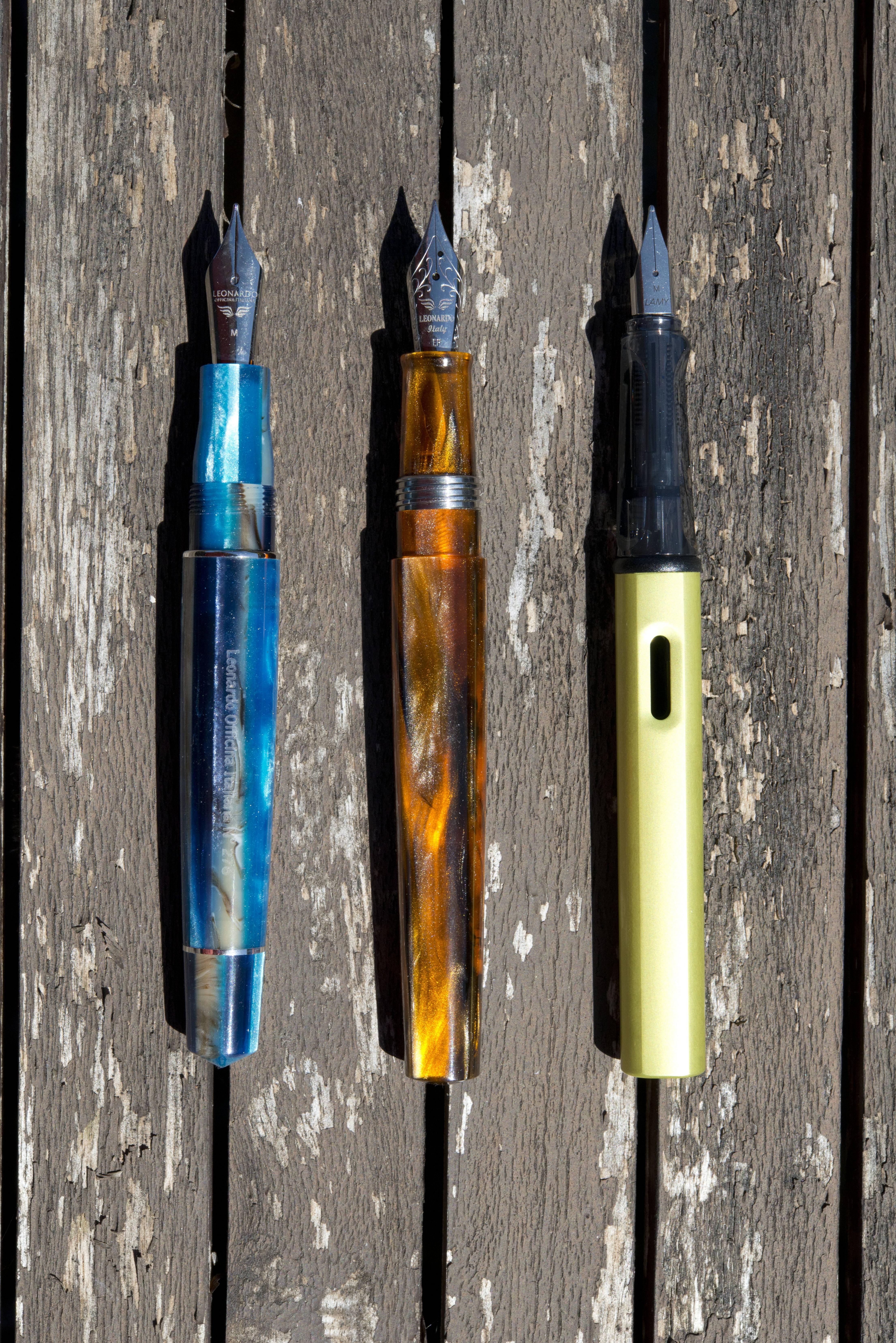 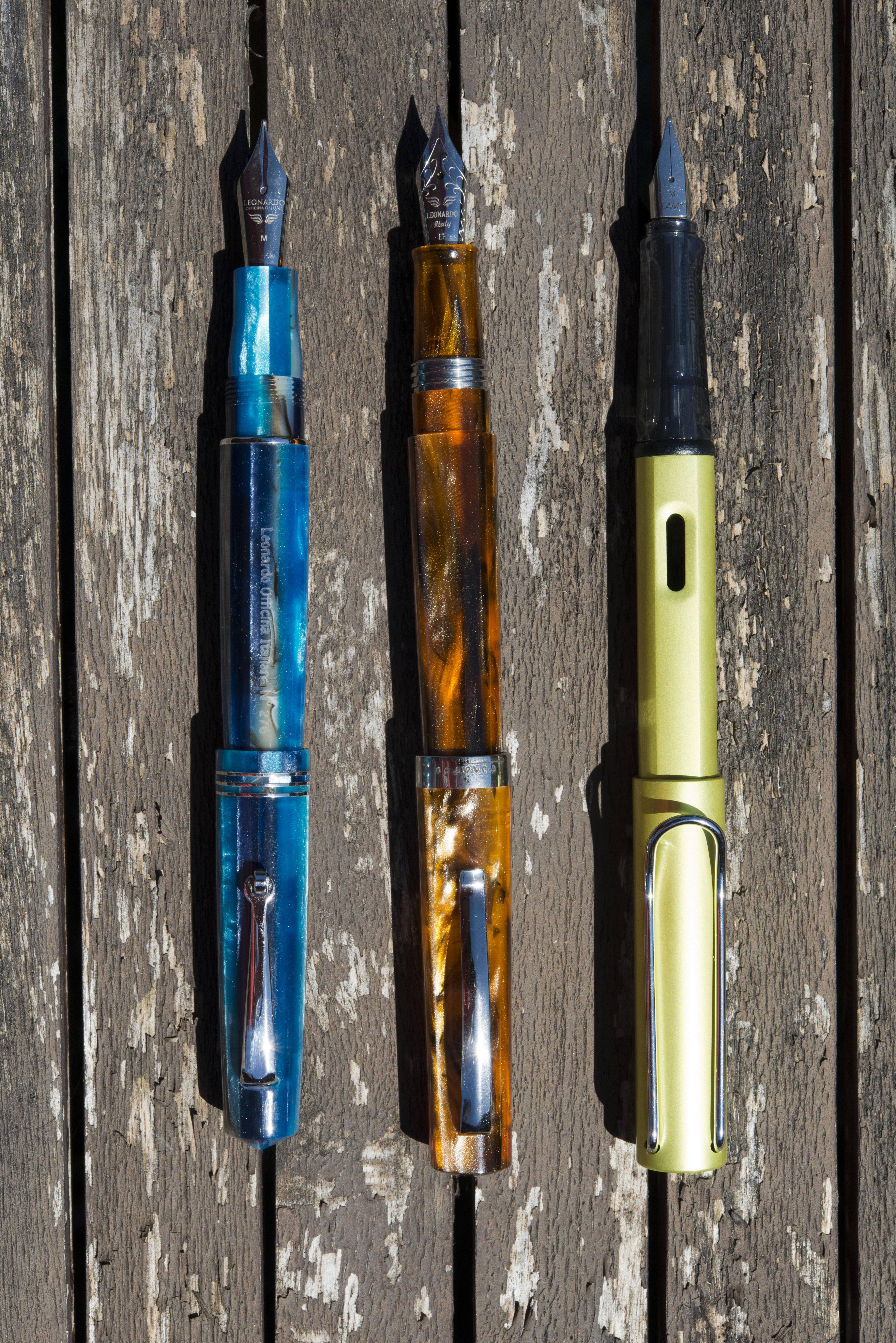