During this review, and overview I will be covering both of my pens made by John Twiss.

John has been a stalwart of the UK pen show scene for many years.  Starting as a hobby, either before or after he took early retirement from IT, he hand makes his pens from a workshop at the Sherwood Forest Art and Craft Centre, near Nottingham in the UK, selling both on line and through pen shows.  With the latter, not only is he an attendee, but also helped restart the Newcastle Show in 2018.  In addition to his own pens, he also sells other brands through his (joint owned ?) TwiCo shop.

For his normal pens, John uses not only regularly available acrylic blanks, but also those made by Conway Stewart and OMAS, plus ebonite.  In addition he also does silver and metal work.  Nibs are Twiss branded JoWo, with a range available including fine, medium, broad, and 1.1.  Also for an additional cost he can supply instead an 18k gold JoWo nib.  Nibs are tested by him and can also be ground to a buyer’s request (not sure if he can do this at a pen show though).  John also produces one offs and commission work, such as the OMAS Arco Brown re-bodied Pelikan M800 and M1000 that appeared on Facebook.

My two pens (ignoring a TwiCo branded Urushi Ishimeji-Murasaki pen) were purchased at the 2017 and 2018 London Writing Equipment Shows (both held in October).  The first is a base model green swirl water type acrylic with a medium steel nib, the second using OMAS purple swirl acrylic with a theatre mask roll stopper and a fine steel nib.  Both, as is normal for many hand made acrylic pens, came with converters (the first with a K6 screw in Schmidt and threads to take it, the second with a Schmidt K5), but also can be used as eye droppers, and with the first pen being transparent, this is what I did.  The second I kept as a converter pen. 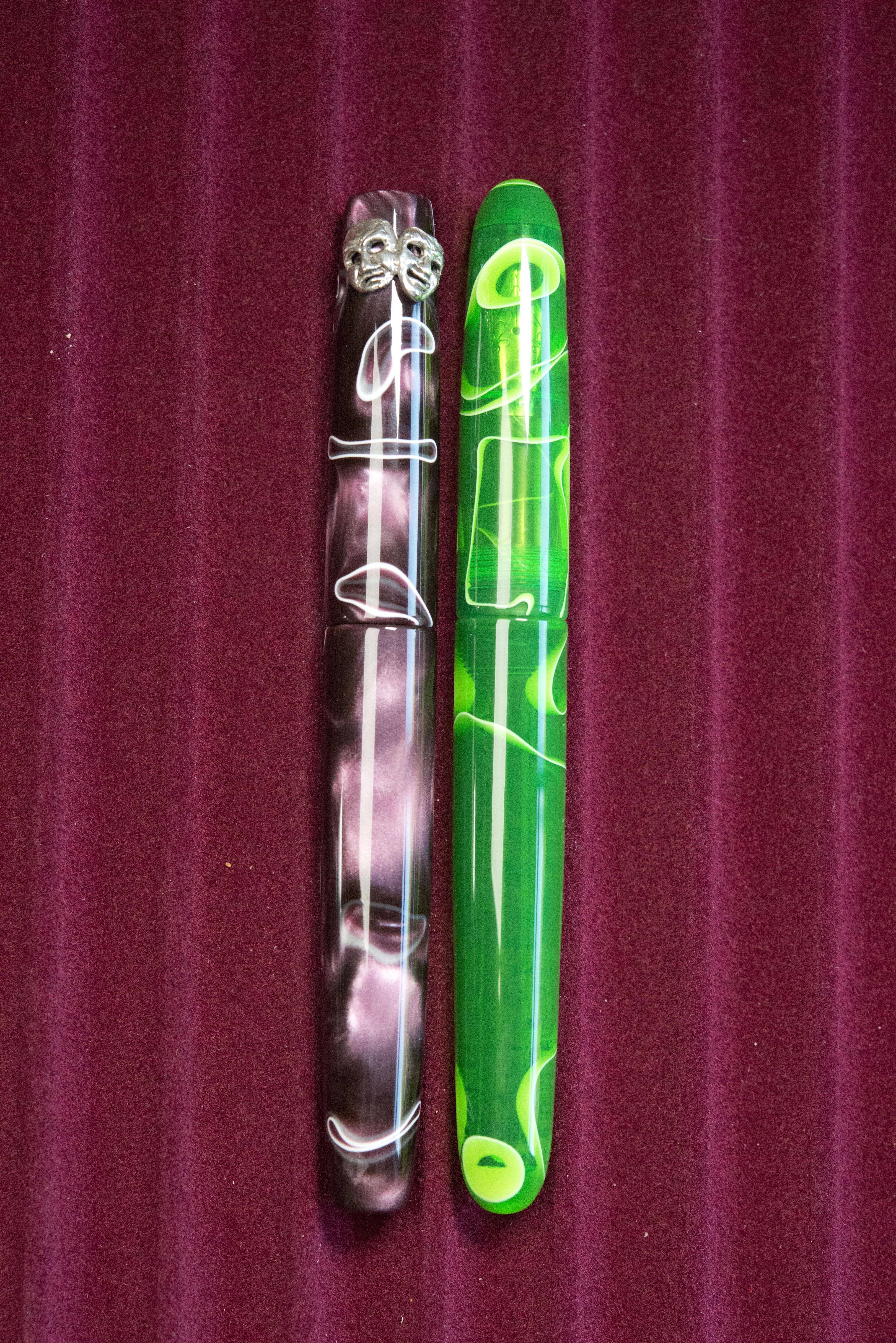 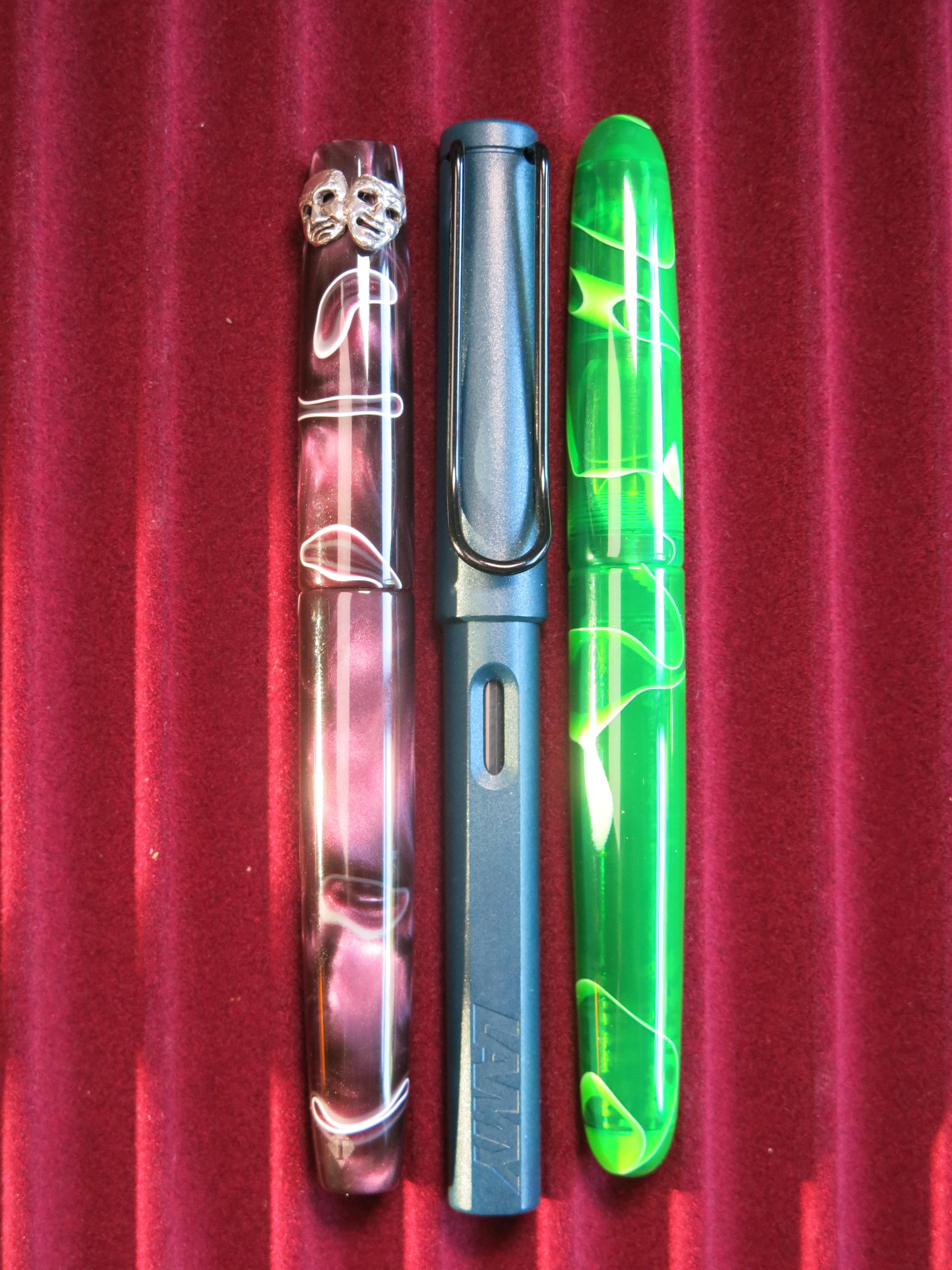 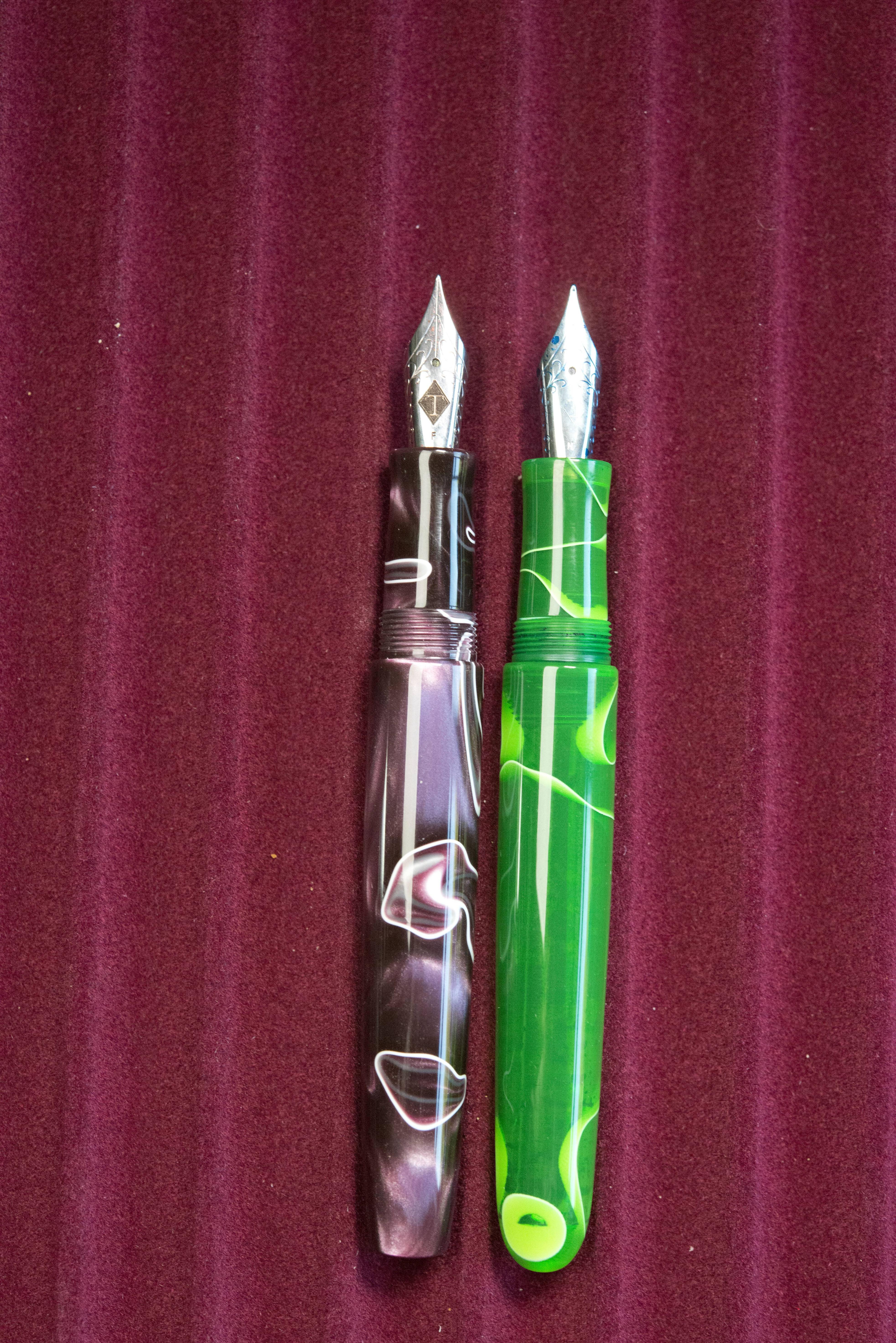 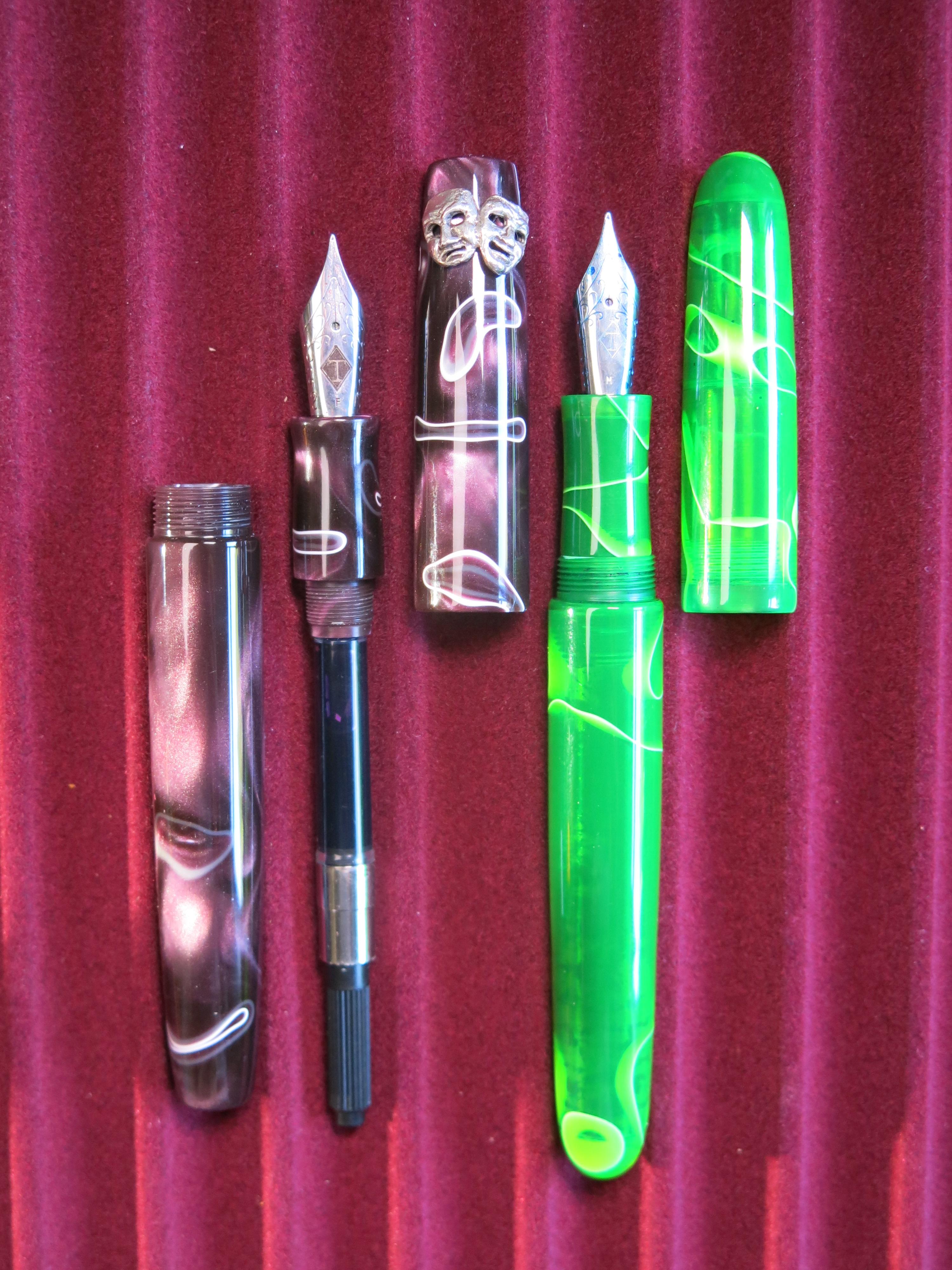 The first pen is clipless and your classic cigar shape.  There are no bands and the only evidence of the seem when capped, is a slight gap, as both the edge of the cap and the point it meets the barrel have been rounded.  The cap unscrews in about two and a third turns revealing a step down of around a millimetre from the barrel to the back of the threads for the cap.  The threads themselves are smooth and once you start writing you stop noticing them.  The grip section is short and has a slight hour glass appearance with the lowest part being about a third of the way between the end of the grip and the threads.  It makes for a comfortable pen to hold.  The ribbon swirl pattern is pleasant and adds character, though how well it works I think it does depend on the base colour as well as personal tastes.  The ‘water’ nature of the acrylic lends itself very well to being used as an eye dropper, for which John does advise you to use silicon grease.  Mine has burped a couple of times when partially full, but this is the risk from that fill method and would not have occurred if I’d kept to using the converter.  The nib is very smooth and does feel tuned.  The cap seals well and over time I have noticed very little ink evaporation.

For my second, I knew John was bringing a number of pens made from OMAS acrylic rods to the 2018 London Writing Equipment Show due to a post on Facebook.  There was one I had my eye on and looked for at his table, finding it, however, I also spotted this purple one at the same time, and while more expensive due to the roll stop it grabbed my attention.  The chatoyance of the material is frankly stunning and one of the reasons many people miss OMAS.  The patterning is white, ribbon type swirls.  The only metal work is the pair of theatre masks used as a roll stop, but it was the colour/pattern of the pen that grabbed me, not this.  As with the previous pen there is a slight gap where the cap meets the barrel when closed due to the edges being rounded.  The ends of this pen are near flat, curving up very slightly to a peak, almost like a very shallow dome.  Unscrewing the cap takes about one and two third turns, revealing a very similar layout to the previous pen, again with a slight drop to a short thread section, the threads themselves being soft and barely noticeable, then a grip which tapers in slightly to about two thirds the way along, before tapering out at a steeper angle for the final third towards the nib.  It makes for a very comfortable hold.  The pen originally had a medium nib installed, but John swapped this out at my request to a fine at the show.  Being able to do this does, however, depend on what nibs he has with him as spares and in other pens.  It writes very smoothly. 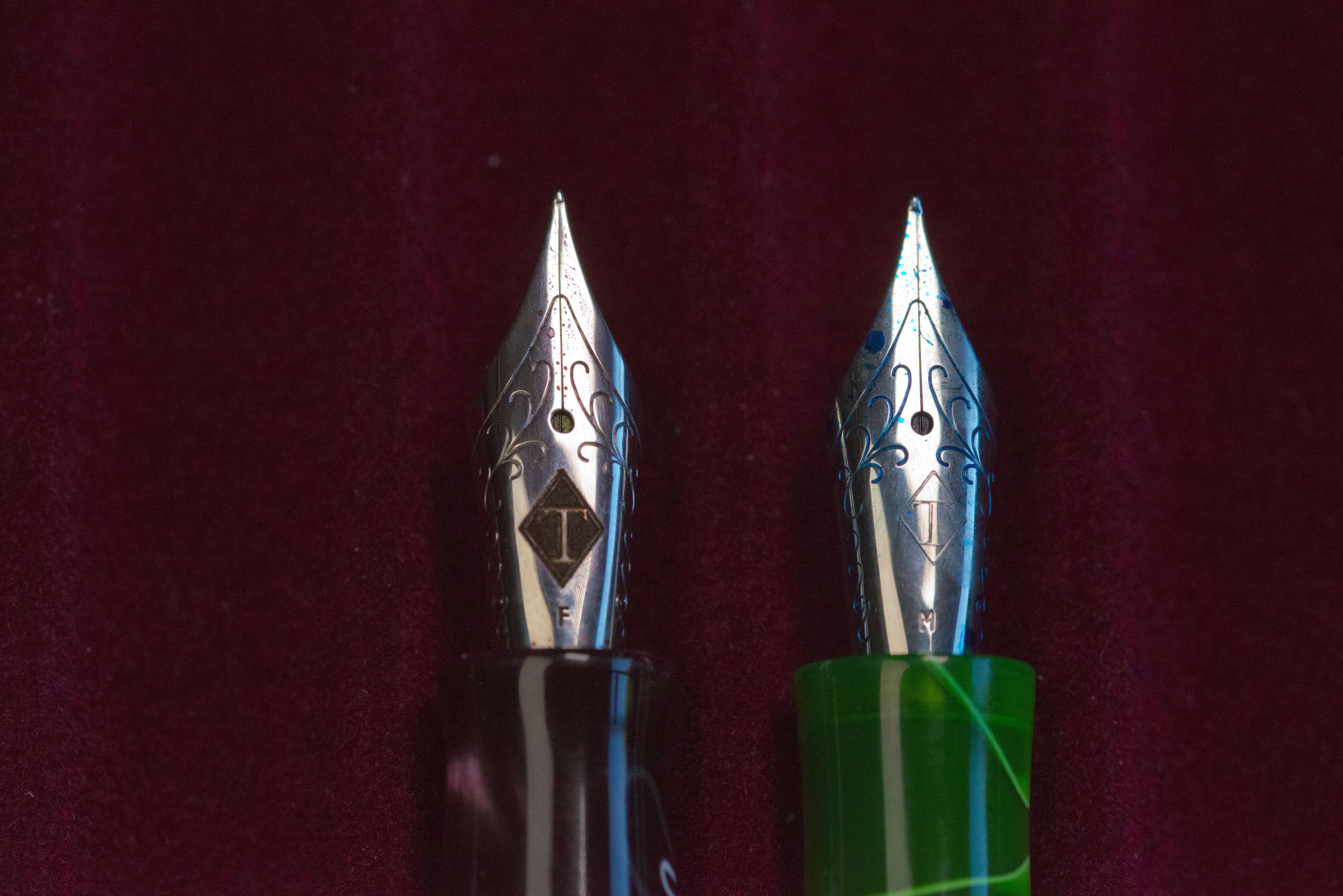 Neither of the pens post, which for me is not a problem as I prefer not to do so.  The pens are long enough that this should also not be a problem for some one with larger hands.  It gives an excuse to go to a pen show to try a Twiss pen out to make sure you’re comfortable with it.  Also John does allow dip testing at his table, as I did so with the purple pen, both with it’s original medium nib and the fine one I bought the pen with. 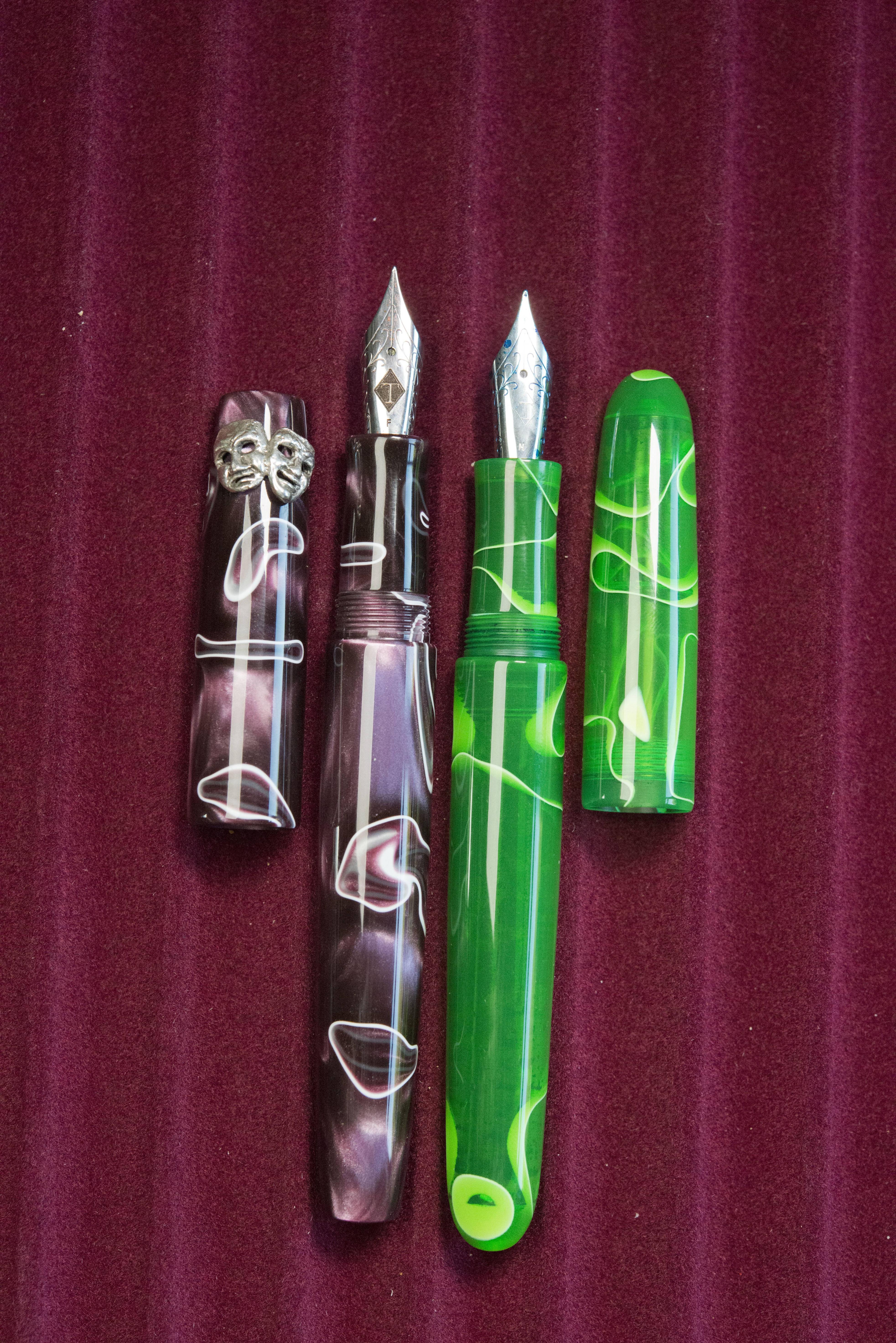 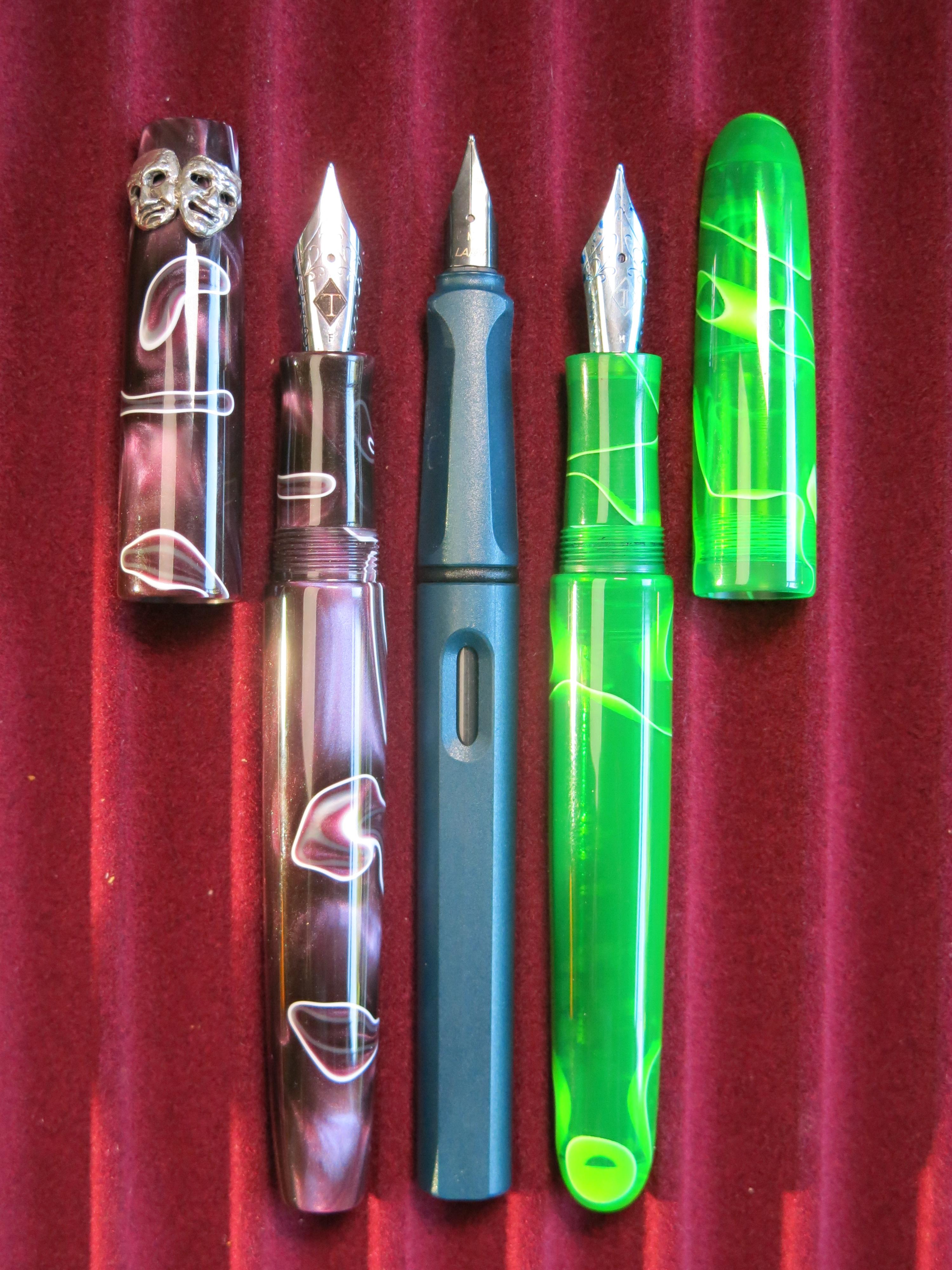 So any downsides.  It’s hard to say, after all these are hand made pens by a single person, made by eye and hand, so no two are absolutely identical.  To quote John’s own site “A lot of time is spent fabricating one of these pens as there are no patterns or instructions. It is almost like a combination of engineering and sculpting. These pens are truly unique.”.  The downside is that patterns do not, or at least on mine, line up between components, which is a shame with the OMAS acrylic, but actually it does not detract from the ownership experience.  Cost wise his pens start at about £170 for the cheapest acrylics, £190 with Conway Stewart rods, and £225 with OMAS ones, so not cheap, but not necessarily that much more than you’ll pay in the UK for a CNC machined Edison pen.  He does give slight reductions at pen shows (at the LWES at least), which are already factored in to his displayed prices.

Would I buy another of John’s pens.  The answer is yes, though I’m not going to make it a standard London Writing Equipment Show expense, especially with the move to the show being twice a year in London (the March show replacing the Cambridge/East Anglia one).  It will partly be material dependant, but he does offer a lot of options.  Incidentally I’m hoping to be near his workshop in April/May for an event involving a friend and ex-colleague so I will probably try to use it as an excuse for a visit to the workshop (and maybe write up an interview/photo session here ?) if I have the spare time on the day. 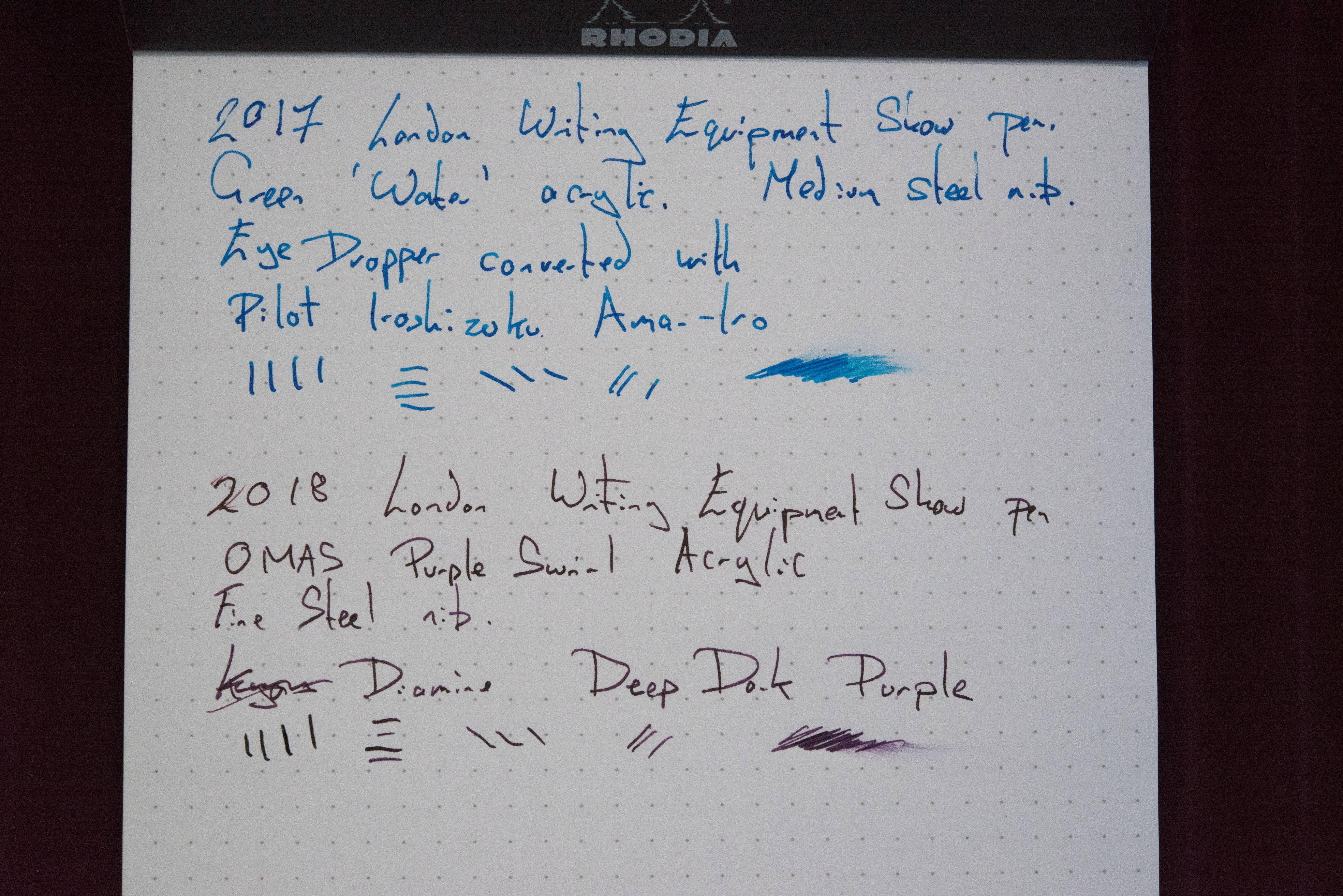