At the start of 2019, Onoto were invited by the British Government to be part of a trade deputation to Dubai.  While there they were inspired by the traditional rich colours of Arab art and design.  On return, one Feng Li experimented with filling in the chasing pattern on Pearl Magna Classic, looked at the results and … a set was created and sold at the following pen shows. 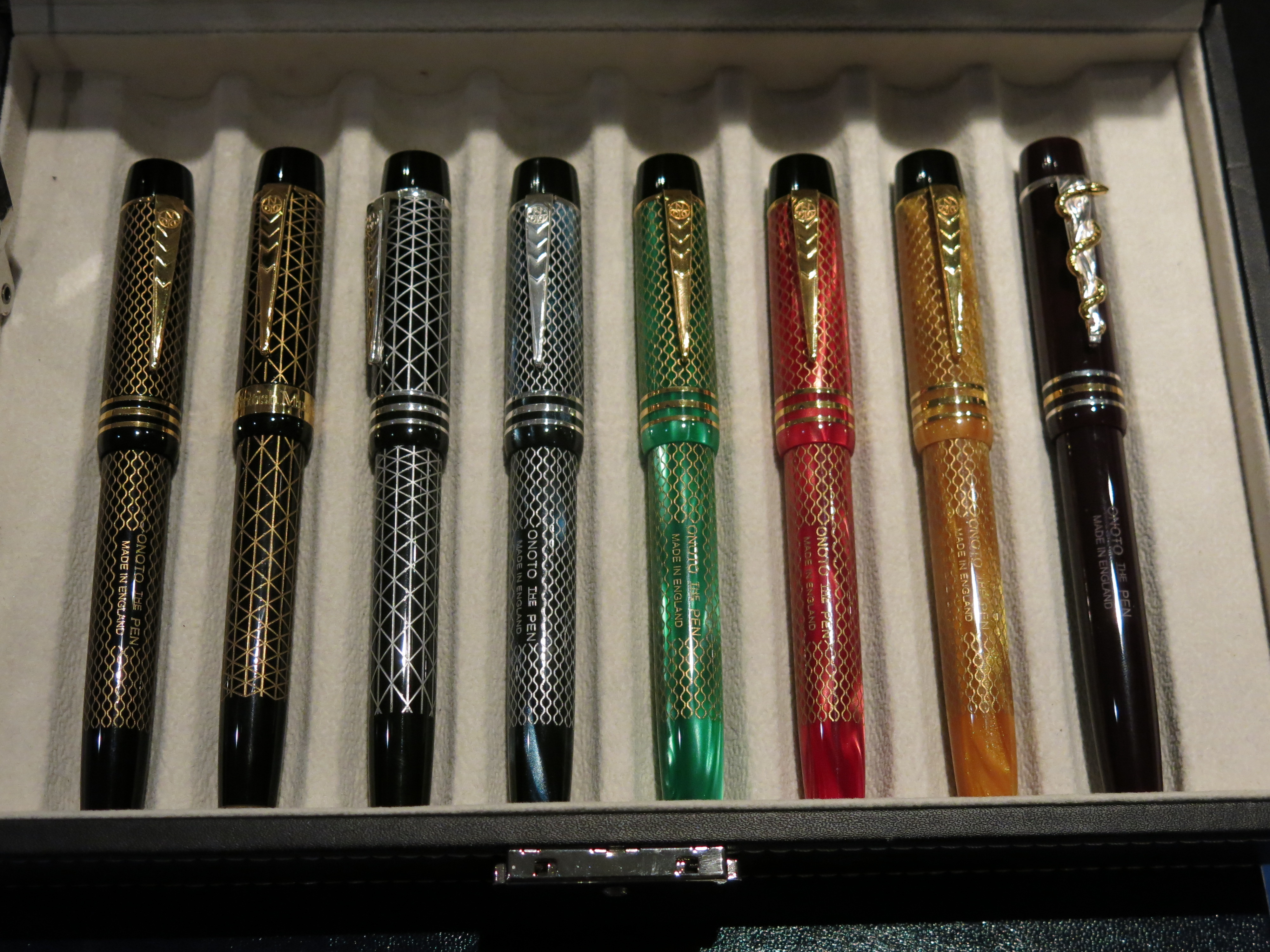 Despite trying to dodge the Onoto table at the London Spring Show, it was actually the display above that caught my eye.  Having looked at the set, then looked closely at a few, I found my wallet emptying for the burgundy model.  It was a close run thing.  I still part wonder if I should have bought the green or blue pens instead.  I do not regret the choice I made, though looking at that picture the green still pulls at my heart strings.

Note I am not going to do a full review of the pen, after all it is just a different finish of the Onoto Magna I previously reviewed here.  Instead I’ll just cover the finish, the experiences with this pen, and include some photos, including some taken at the recent photo session. 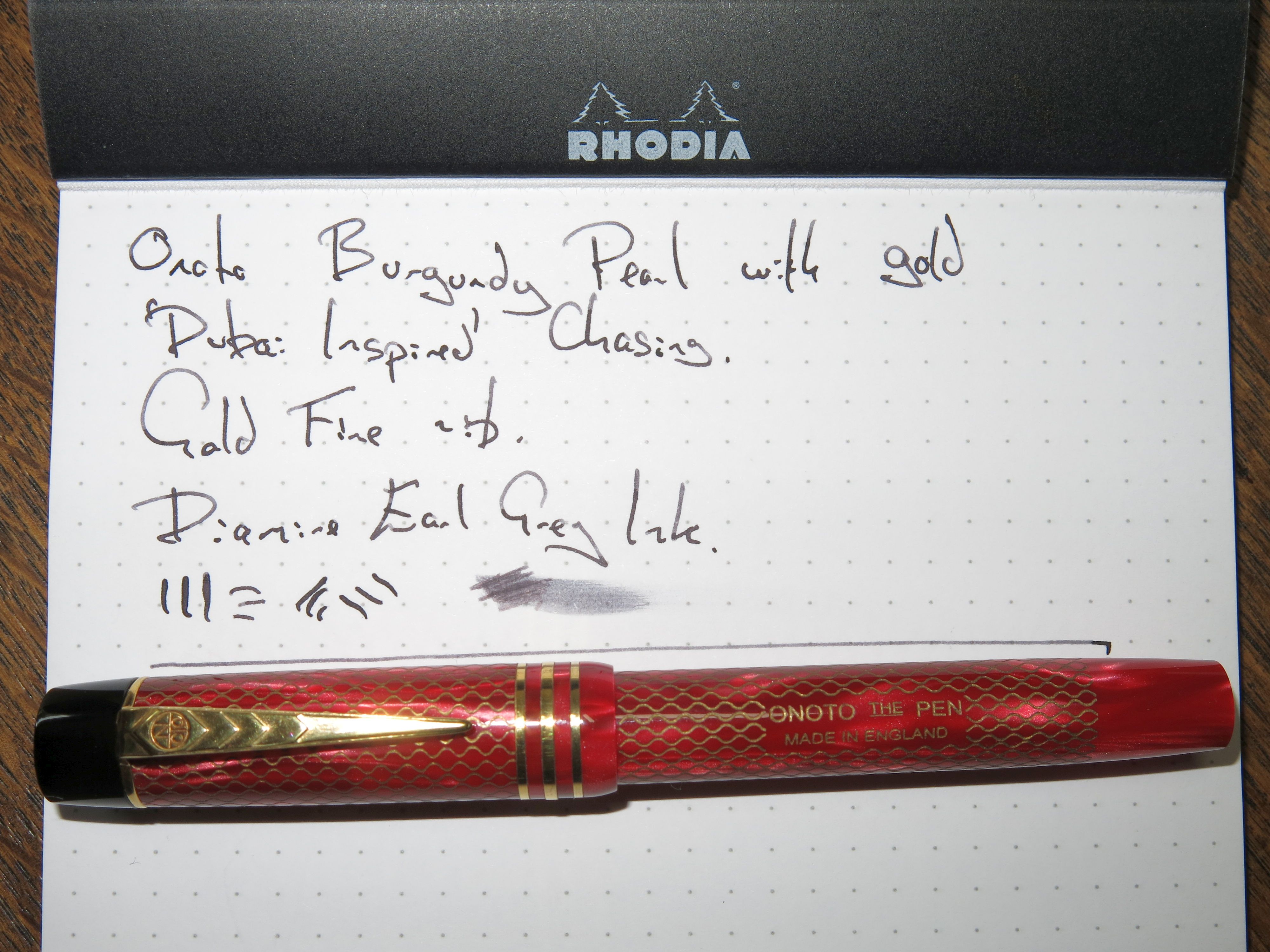 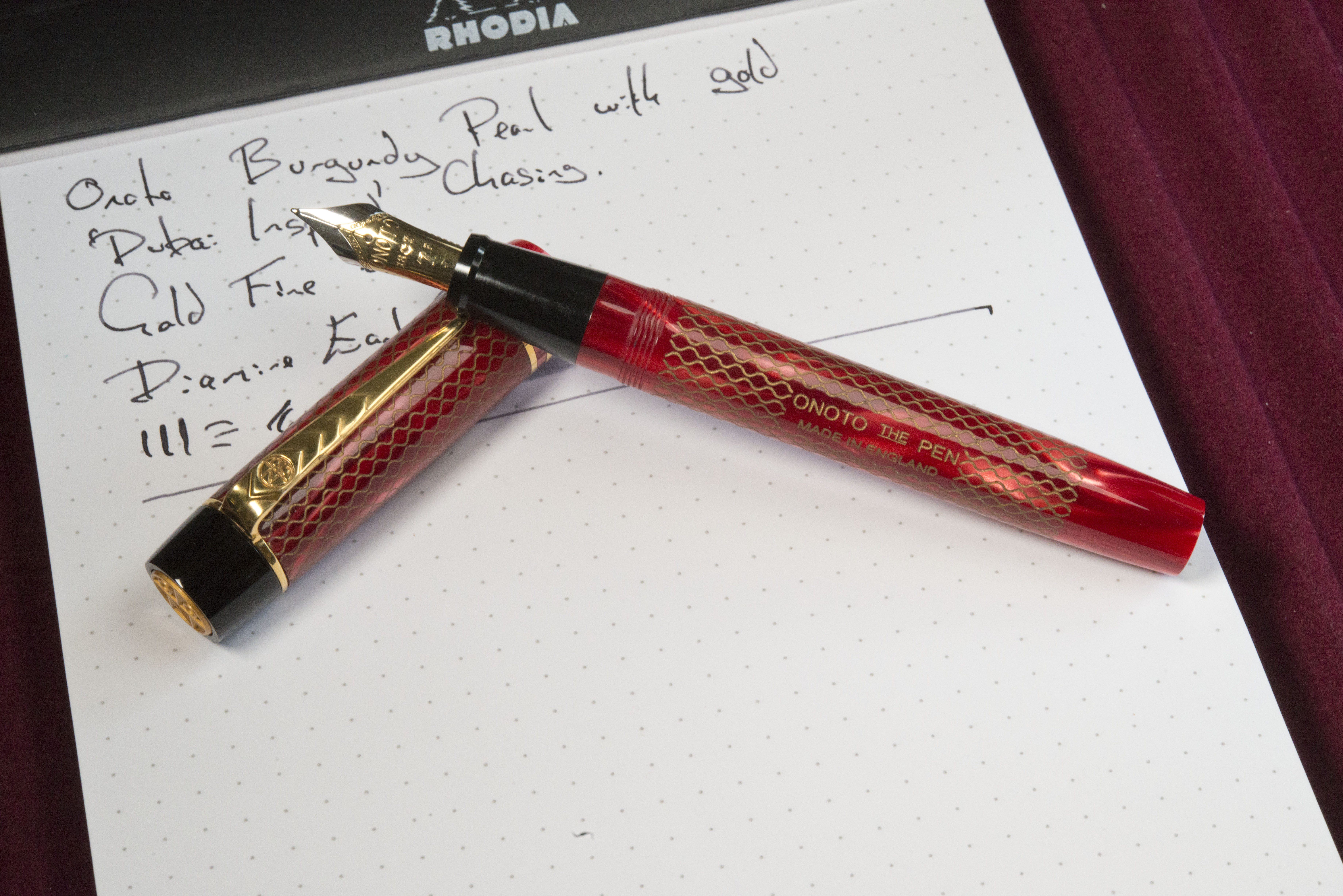 If you buy a pen directly through the website or through a vendor, then the nib will have been tested and tuned back at the workshop in Norwich. Again at a pen show, the installed nibs will already have been tuned. You can swap nibs at a show and also some pens, such as these specials, were awaiting nibs to be fitted. The downside to that is occasionally a poor nib will get through, and this was the case for me. The ‘Dubai Specials’ all were without nibs, allowing the buyer to choose what they wanted. I decided to splash out on the fine gold option. Over time I found it to be inconsistent in ink flow and slightly scratchy, though under a loupe I could not see a problem. I contacted Onoto, sent the pen back and a week later it was returned, with an explanation letter from Feng (using the pen), detailing what he had done, as well as some free sheets of the 100 gms paper Onoto sell. It turned out that the tines were too far apart allowing movement and twisting when making a horizontal motion. The tines were moved closer together, alignment corrected and then the pen tested for the final time. It is now a sweet writer. Note I’m certain if this pen already had a nib installed then it would have been fine from the off. The service was great and I’m a happy chappy.

I seem to remember being told that the gold filling (I’m assuming it’s gold coloured paint, not gold dust at the price the pen was going for) is polished over to protect it. The only areas this will not be the case is on the fixtures. Now most the time this pen has been in a Visconti case or flat on a desk, though occasionally it has been in a jacket pocket. There are no signs of colour loss on the bands, chasing, clip or cap finial, however the bottom disk is showing signs of micro scratches. I’m not sure how or from where, but I wonder if this could be due to the gold being on sterling silver. Thing is, the same has not occurred on the other silver parts. Under a loupe or macro lens (as below) it does look worse than it is, and post this photo I used a microfibre cloth to clean the disk and it now looks better (except under magnification). 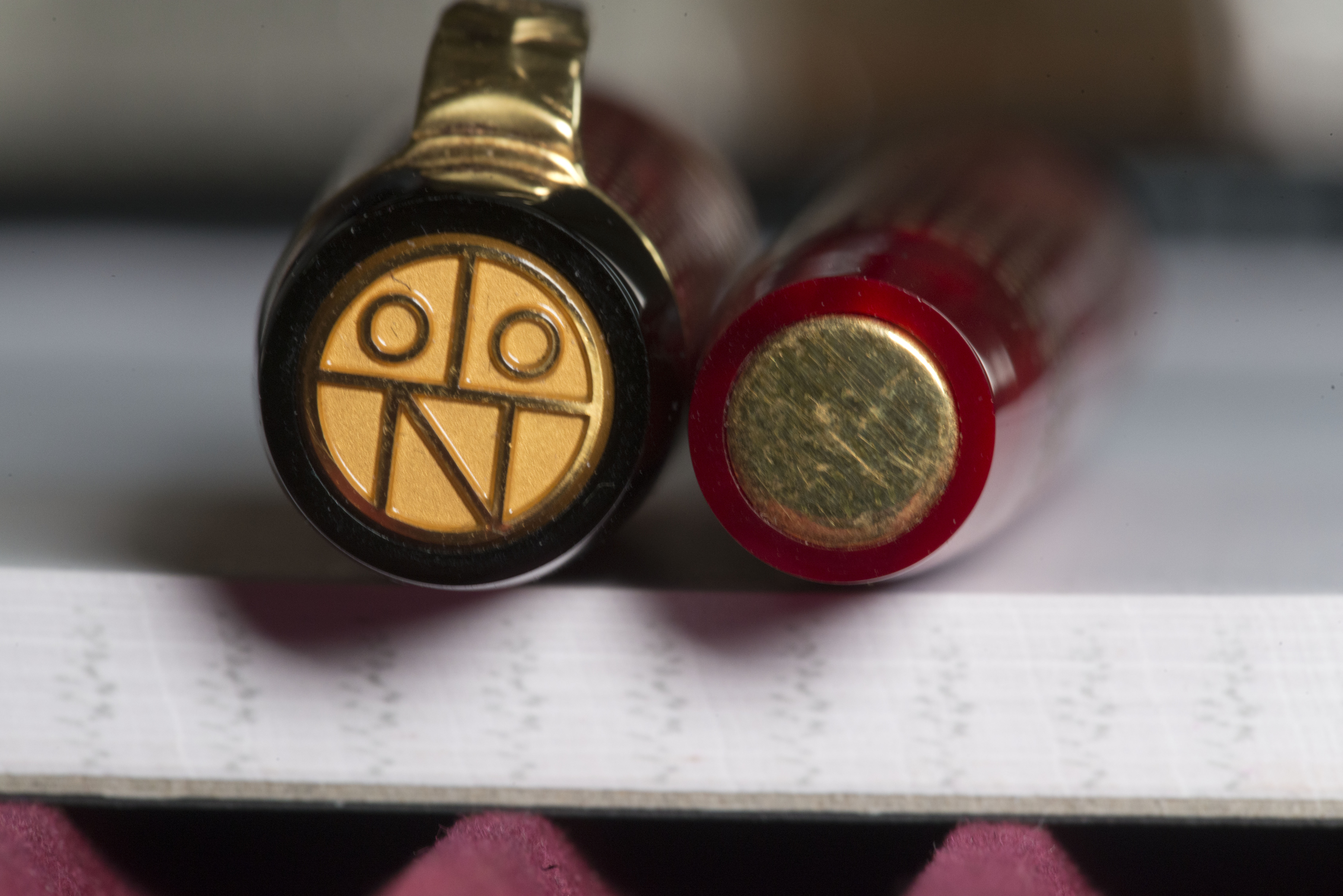 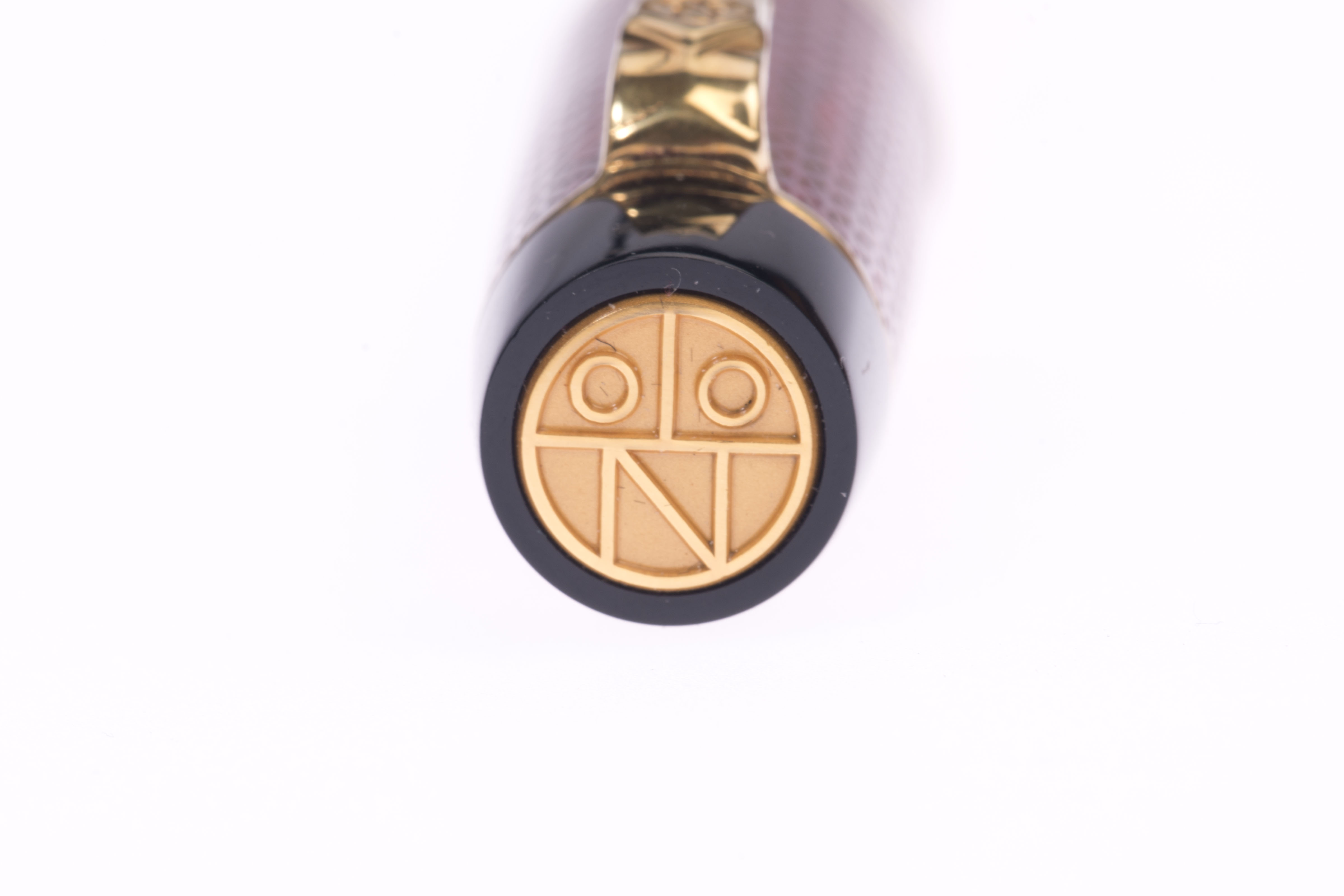 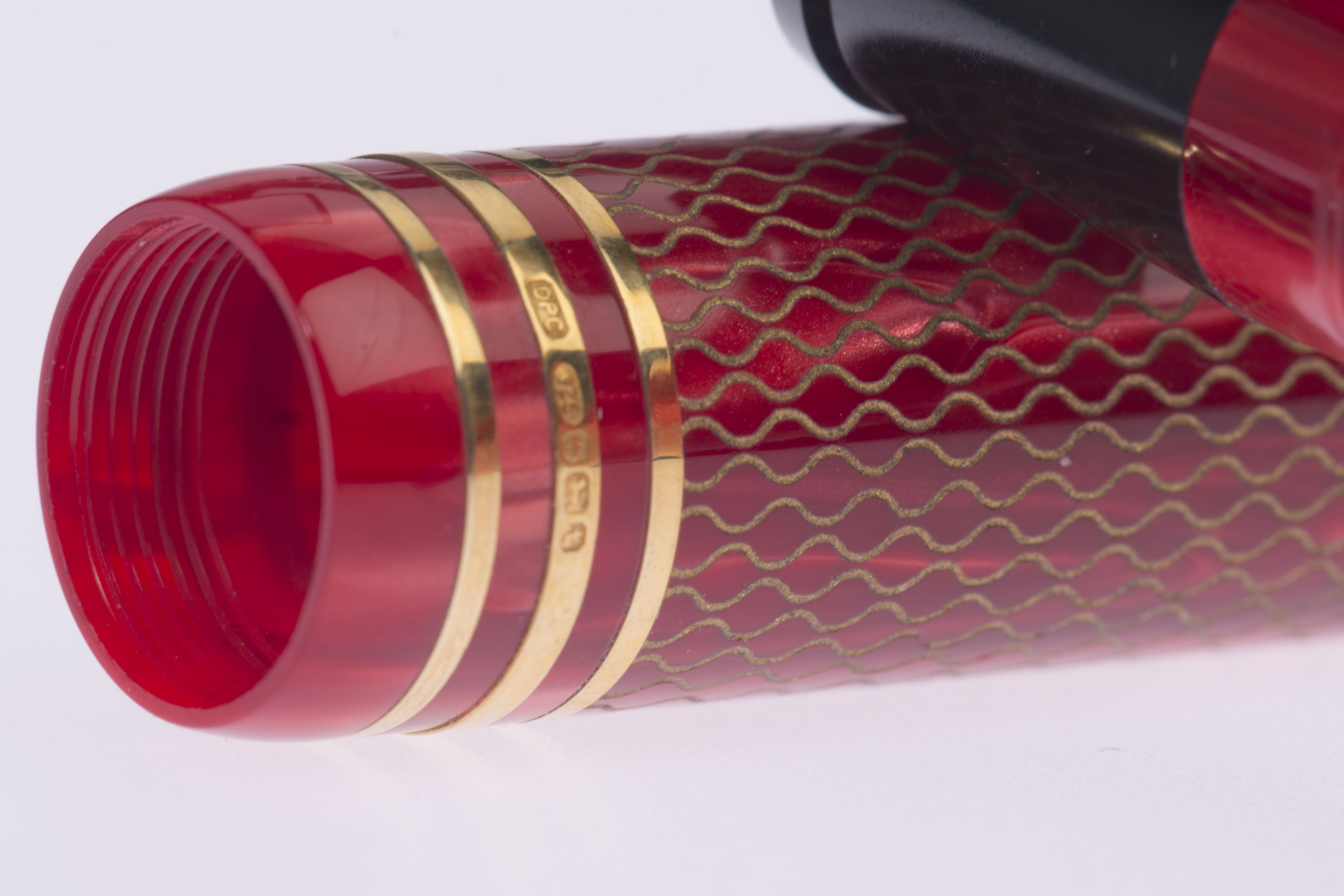 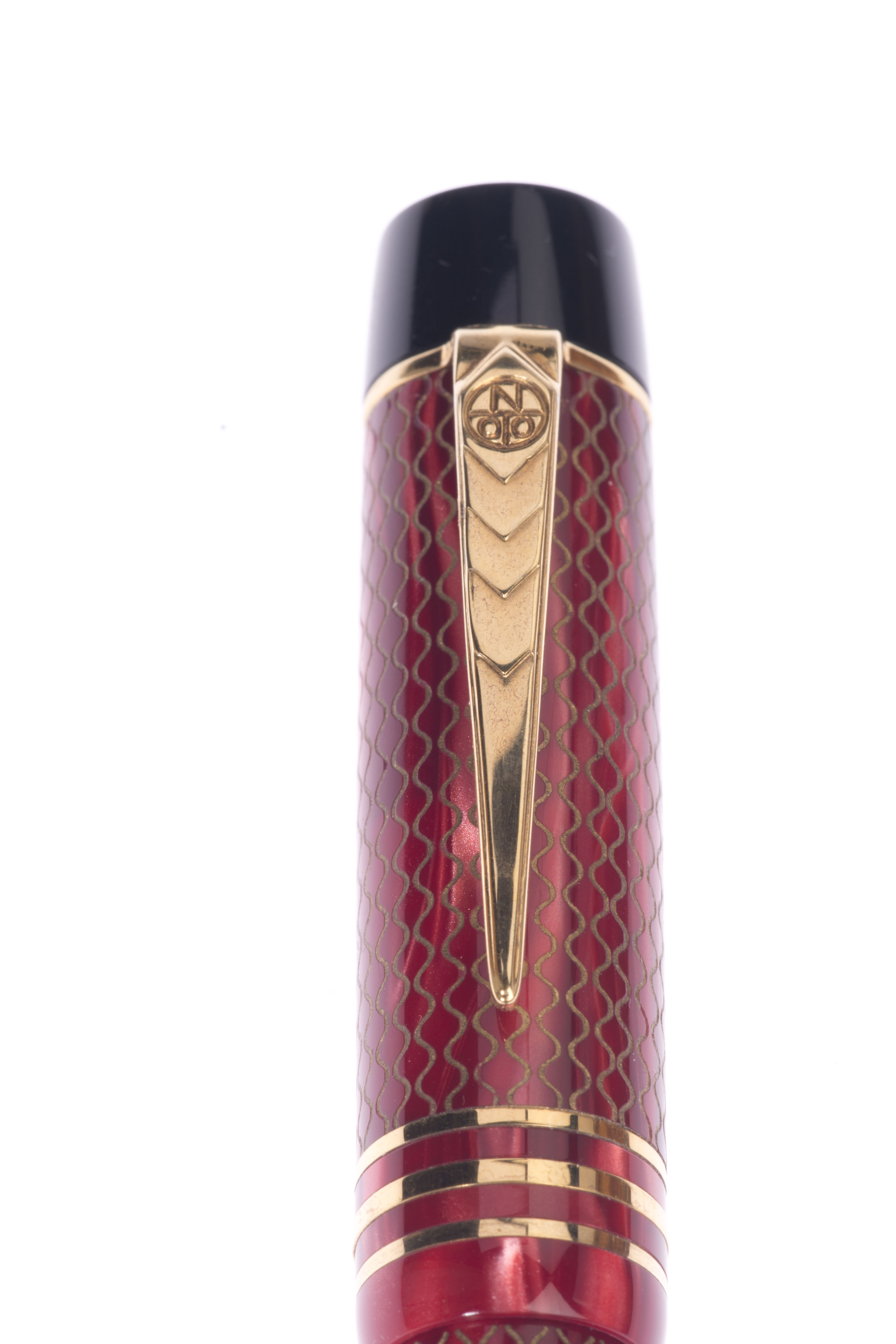 Now I must admit, when I first saw picture of the ‘Dubai Inspired’ pens on Twitter (or from the Onoto email list) I did think the pens looked rather high on the bling scale, but at the show, seeing them in the flesh did change my mind. Using it I do not feel self concious and the only comments I’ve received from friends and colleagues is that the pen looks good.

I’m very happy with this pen – I know Ant/Eciton over at UKfountainpens.com also is with his dark blue/silver one bought from the same pen show.

And now some more photos from a few weeks back … 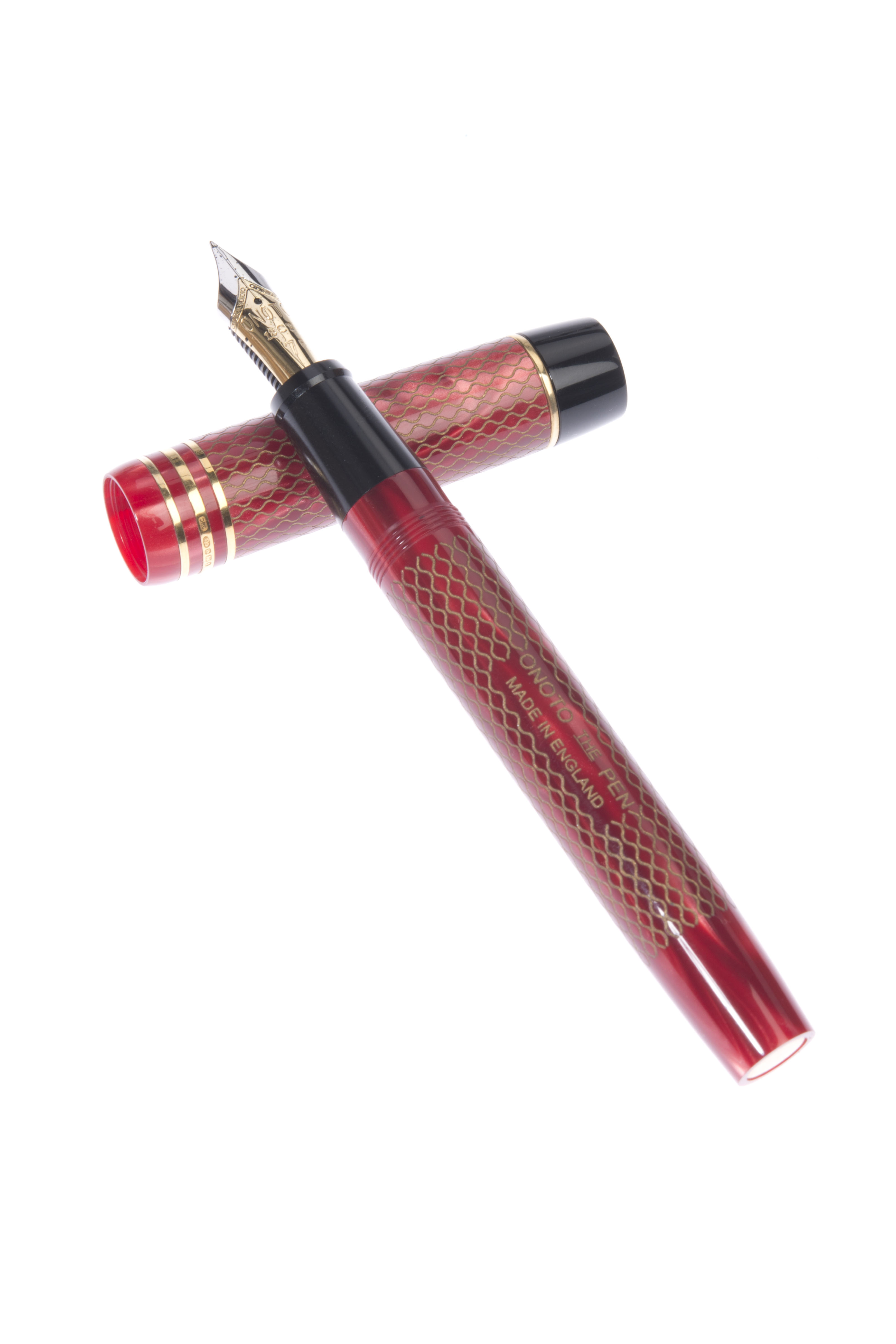 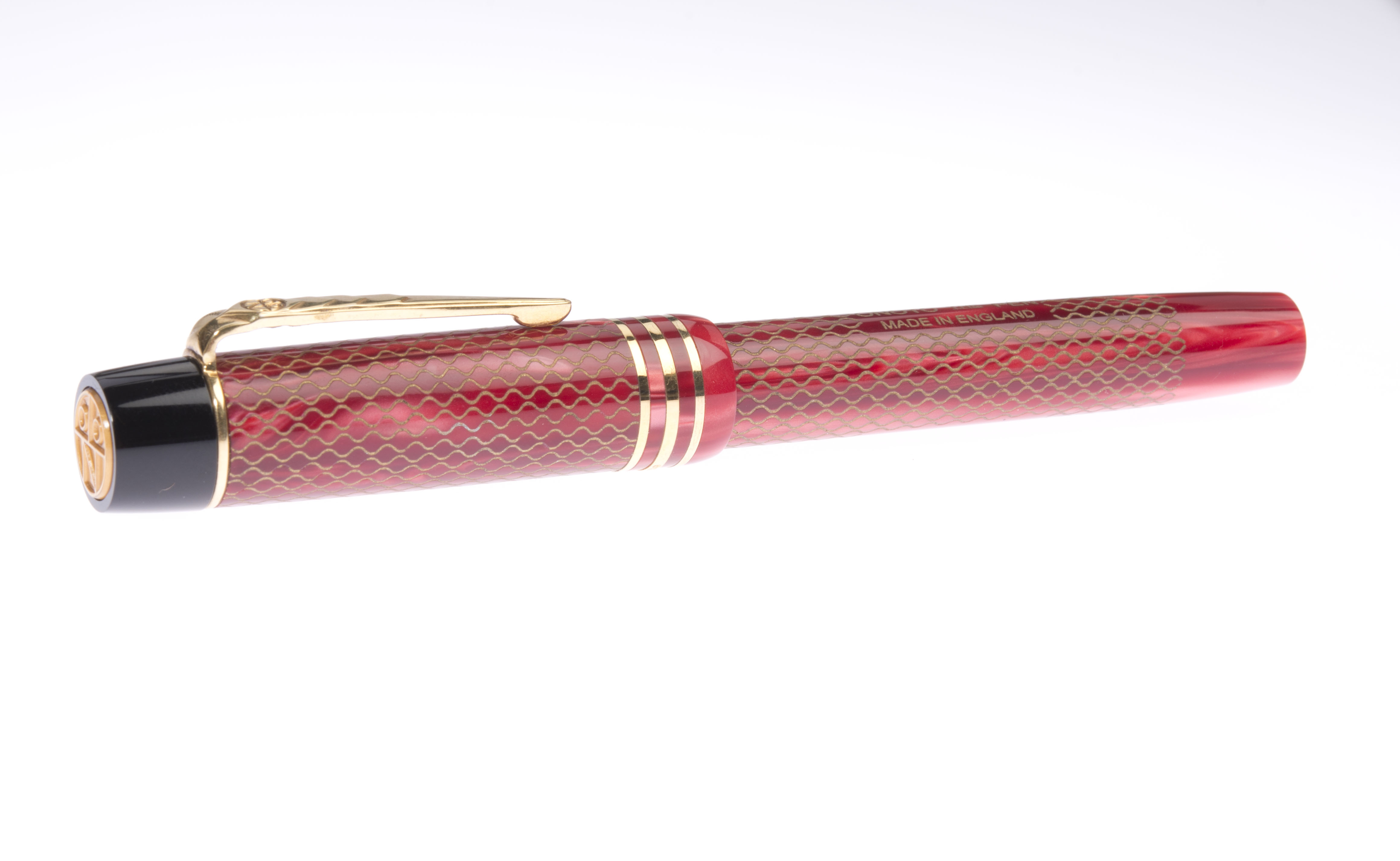 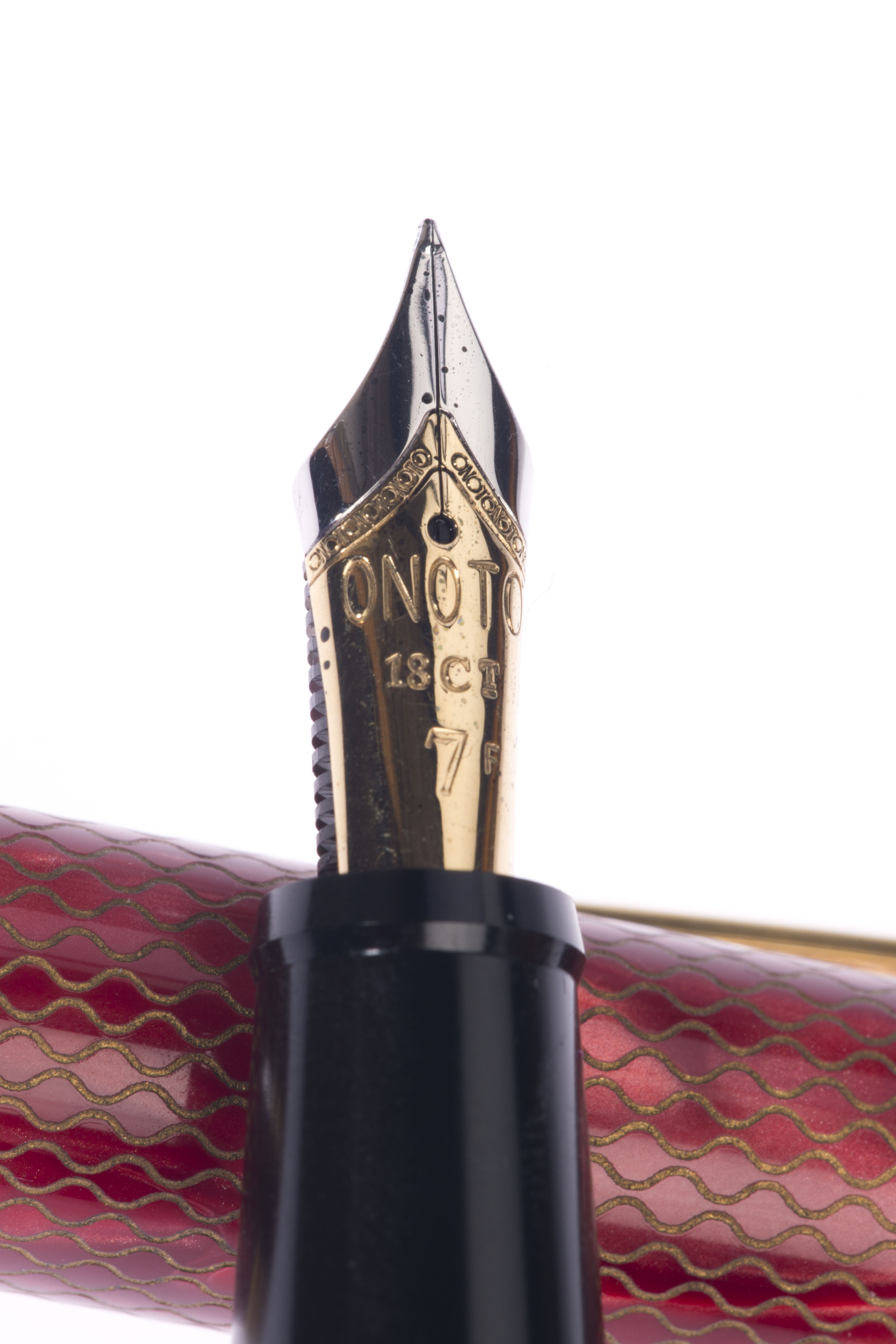 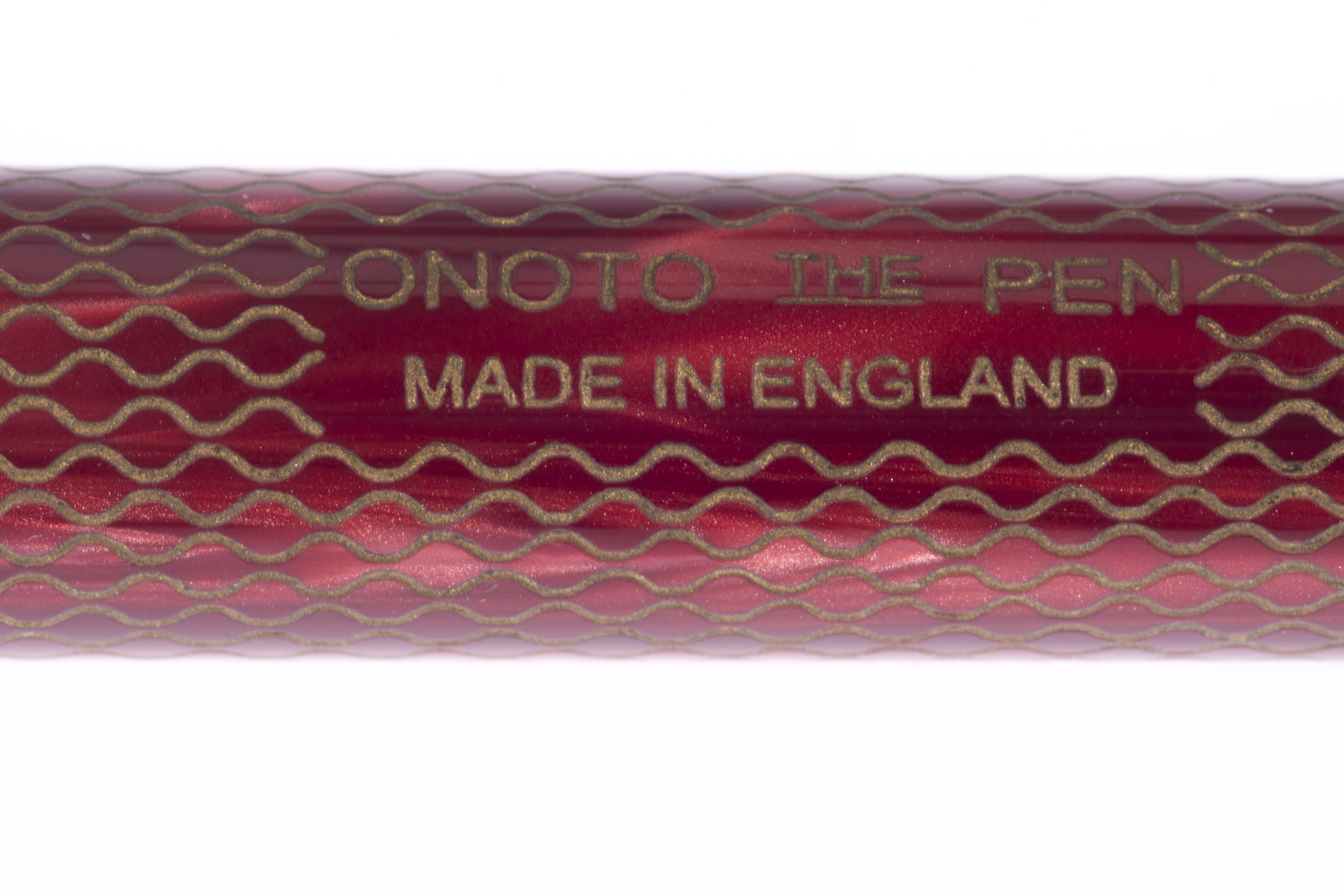 And finally, a very British shot 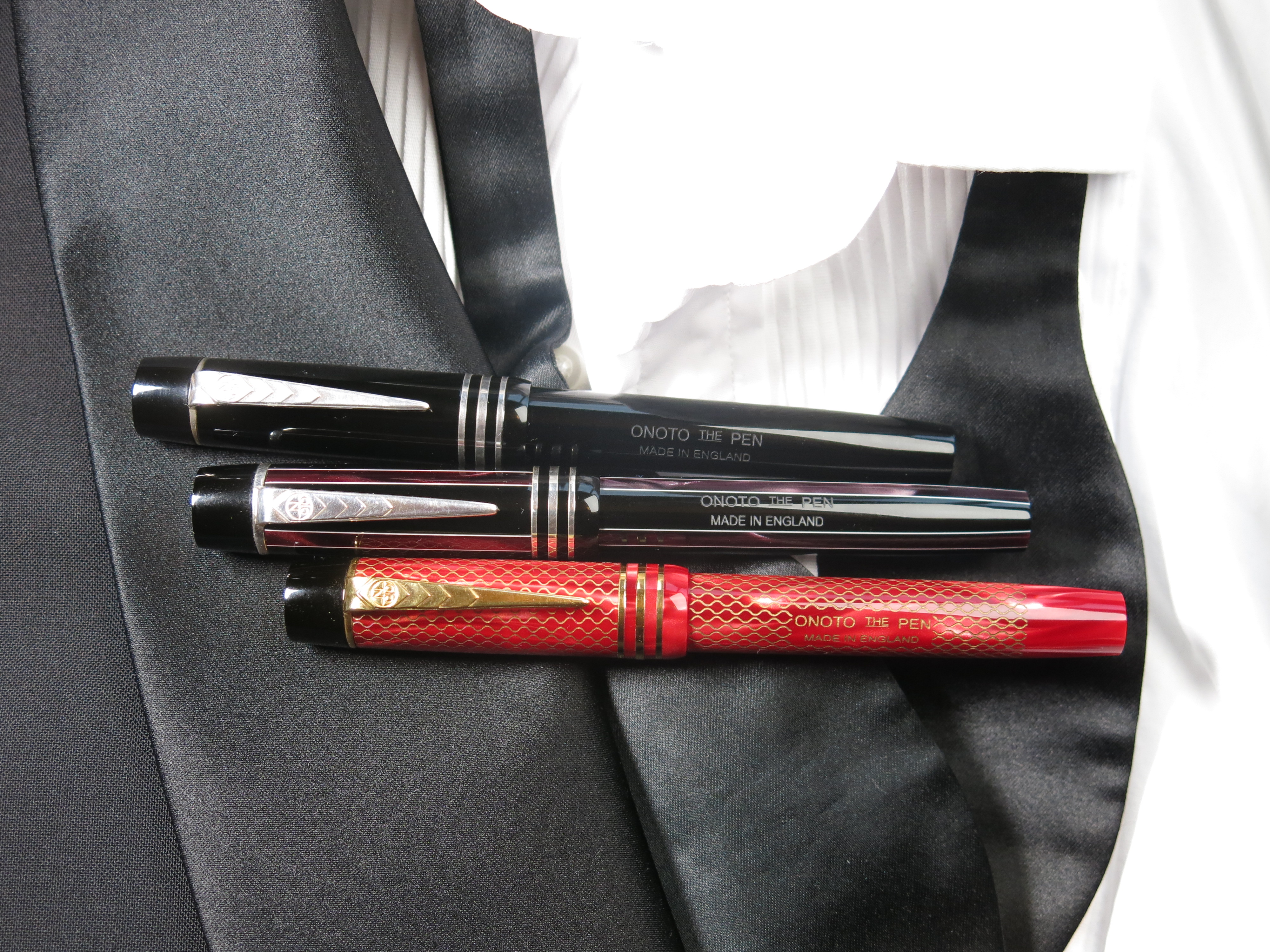