As with many English schoolboys who had to use a fountain pen I grew up on Parkers.  I still have a couple of 25s (plus roller ball, pencil,  & ballpoint) that were my school mainstay, and a Parker 45 that was a present and which I used to enjoy until I had to get the nib replaced (pen rolled off a kitchen top on to the tiled  floor …).  My collection does not stop there as I have a 51 which belonged to my grand father and still works well, plus from this century an Eclipse and an IM.The poor quality of the latter purchases was why I found myself moving away from Parker pens and looking at what else was available.  The poor experiences with the IM and Eclipse (pens clogging on Quink, rapid ink evaporation, hard starting) are actually the cause of my ever expanding interest in fountain pens, though not Parkers.  Recently I saw a video, uploaded by Penultimate Dave, of his blue and gold Parker Duofold Prestige Centennial Blue Chevron and I wondered if their top end pen would bring me back in to the Parker fold.  Knowing Dave and also knowing we both would be at The London UK Fountain Pen Club a few days later I gave him a shout about a pen swap for a review.  My ‘Dubai Inspired’ Onoto went in the other direction and we’ll swap back within a month.

I must admit my preconceived views were not good.  From Dave’s video I wondered if the pen would be a bit on the ‘bling’ side for me (yeah stop laughing, it’s more subtle than my latest Onoto …), that the infamous inner cap crack issues would mean the ink would evaporate more quickly than dry ice, and the nib would be like a nail.  The question was, would using the pen for a couple of weeks or more change my perception.  Would I find myself hankering after one.

The model in it’s present guise has been around since the 1980s as Parkers flagship pen.  It harks back to the heady days of the 1920s when the Duofold was the main pen in the company catalogue, quite possibly becoming famous/popular due to ‘The Big Red’.  The Centennial model was brought out in 1988 to celebrate 100 years of Parker, with it being a permanent range, rather than a limited edition model.  Since then a smaller International version has also been launched.

The pen comes in a rather attractive and purposeful box (note the ink stain was caused by Dave filling the pen post his unboxing film) far different from the generic cheap boxes and blister packs their lower end models come in. Printed on one of the short sides you have details of the two Royal Warrants to Parker Pens. 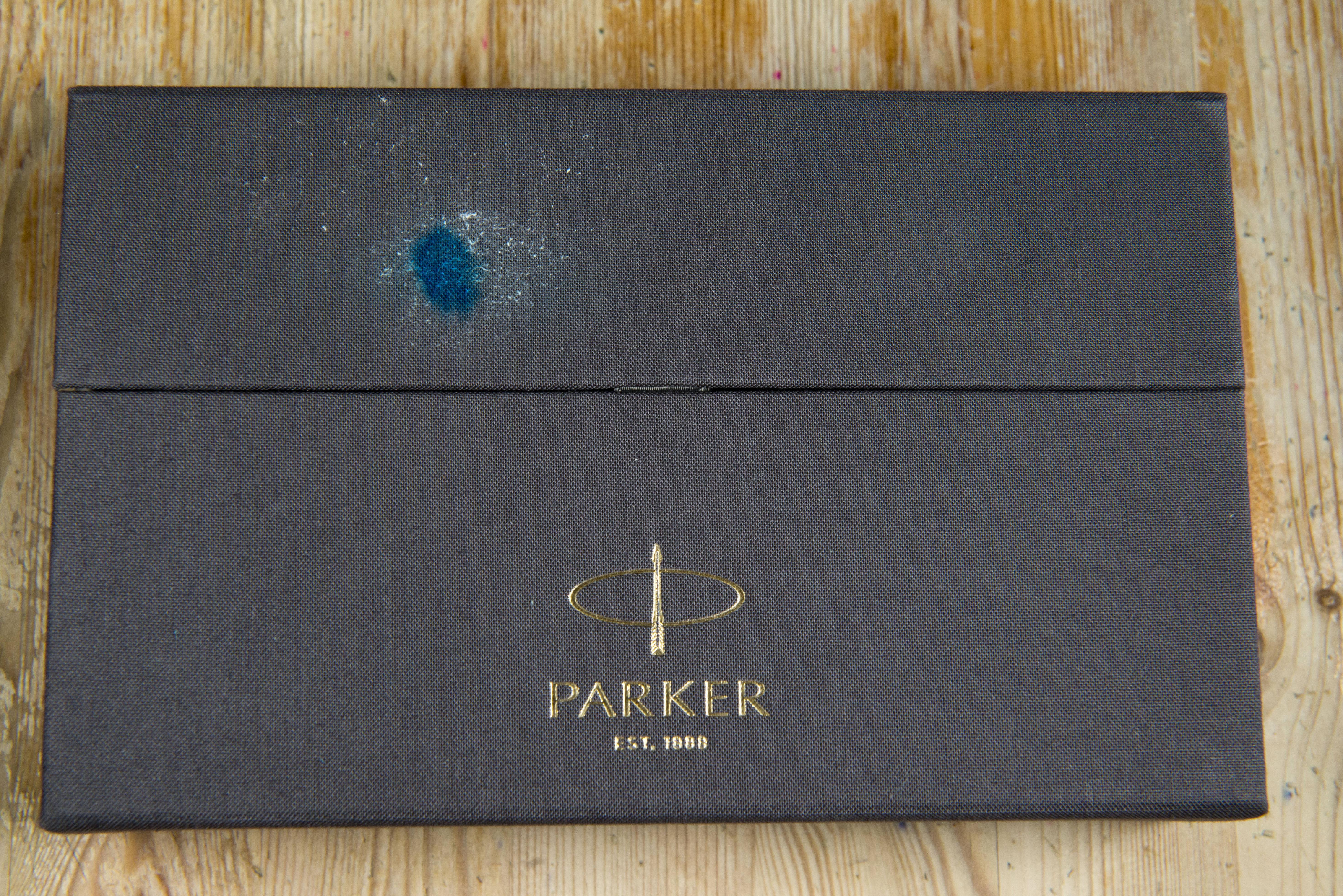 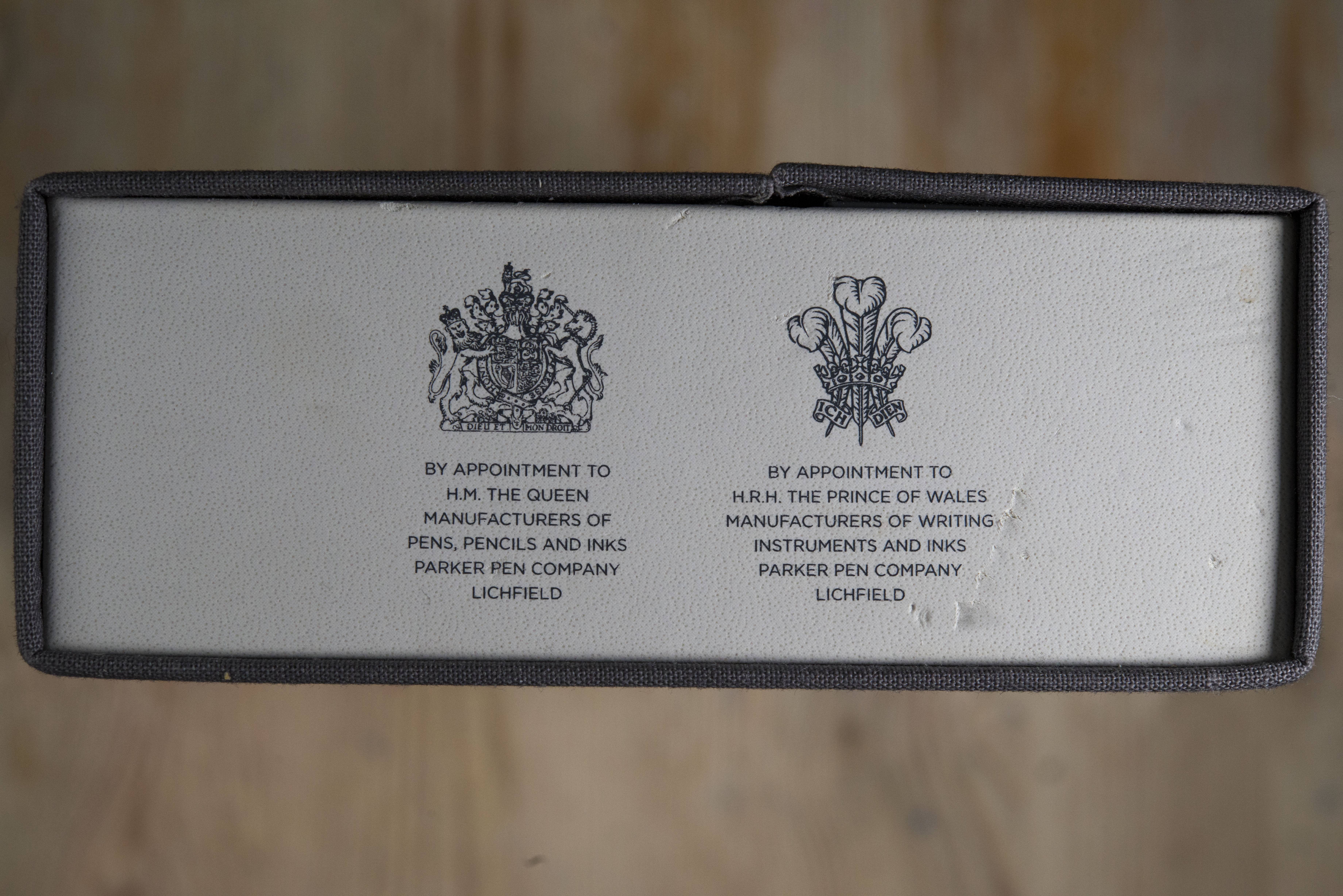 Now Parker are very proud of those warrants, however I feel they are no longer justified and should be cancelled. The main reason is that Parker no longer makes anything in the UK. The Duofold and Sonnet are made in France, as I think are their inks, the other pens are made in India. Sure Her Majesty The Queen famously uses a Parker pen for her personal correspondence, but that is a Parker 51, so at least 47 years old, almost certainly over 60. Can the Warrant still be justified? As to the second one, ok, I admit I have no knowledge about whther Prince Charles still uses a Parker pen or not, but again, these are no longer British pens and the warrants do state Lichfield. {rant over}

Opening the two halves of the lid reveals a card plate with details about their pride and the quality of the pen. A nice touch, but with it costing £600 new, and being top of their line, this should not need to be emphasised. The window showing the cap is a nice touch and I must admit it does look smart. 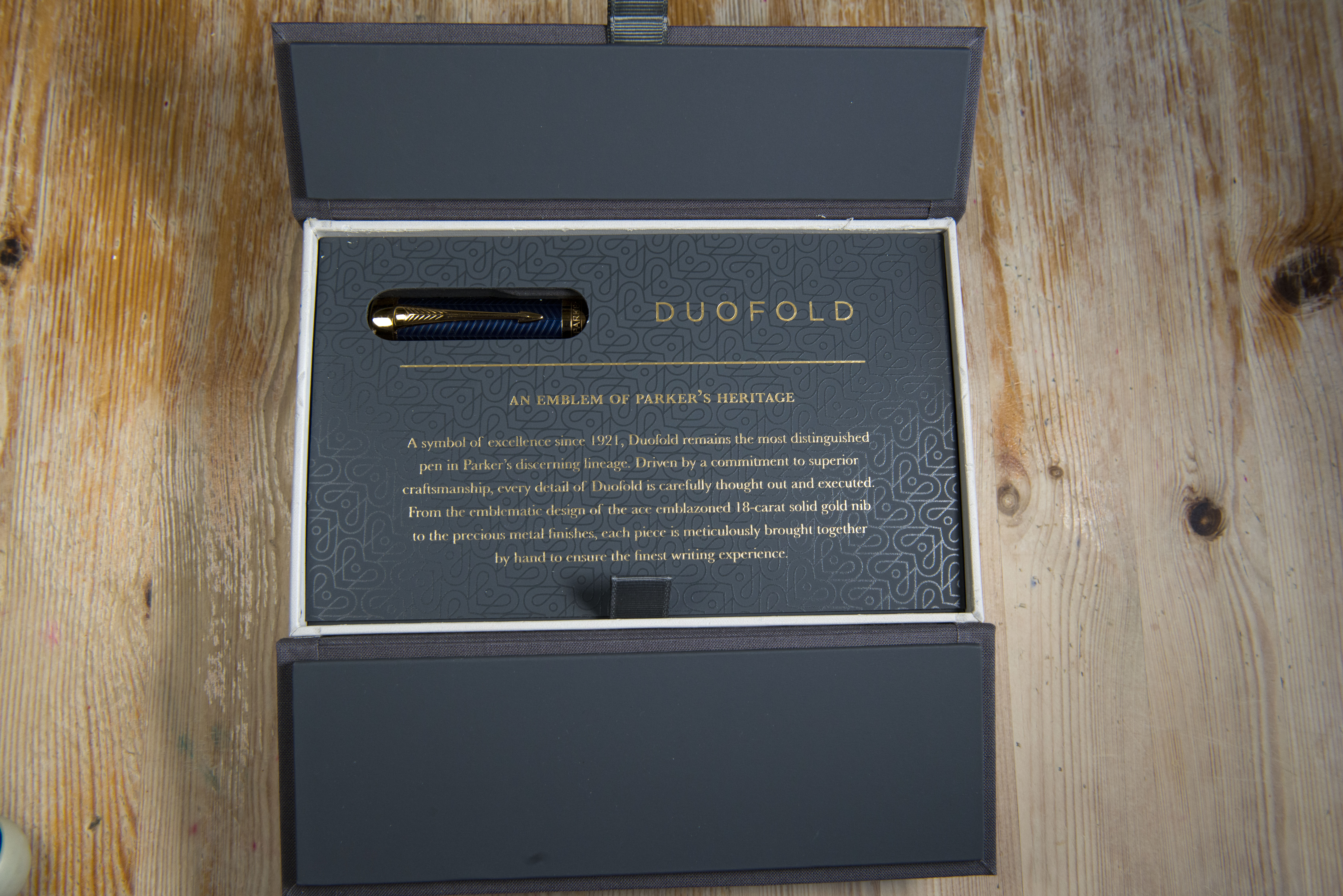 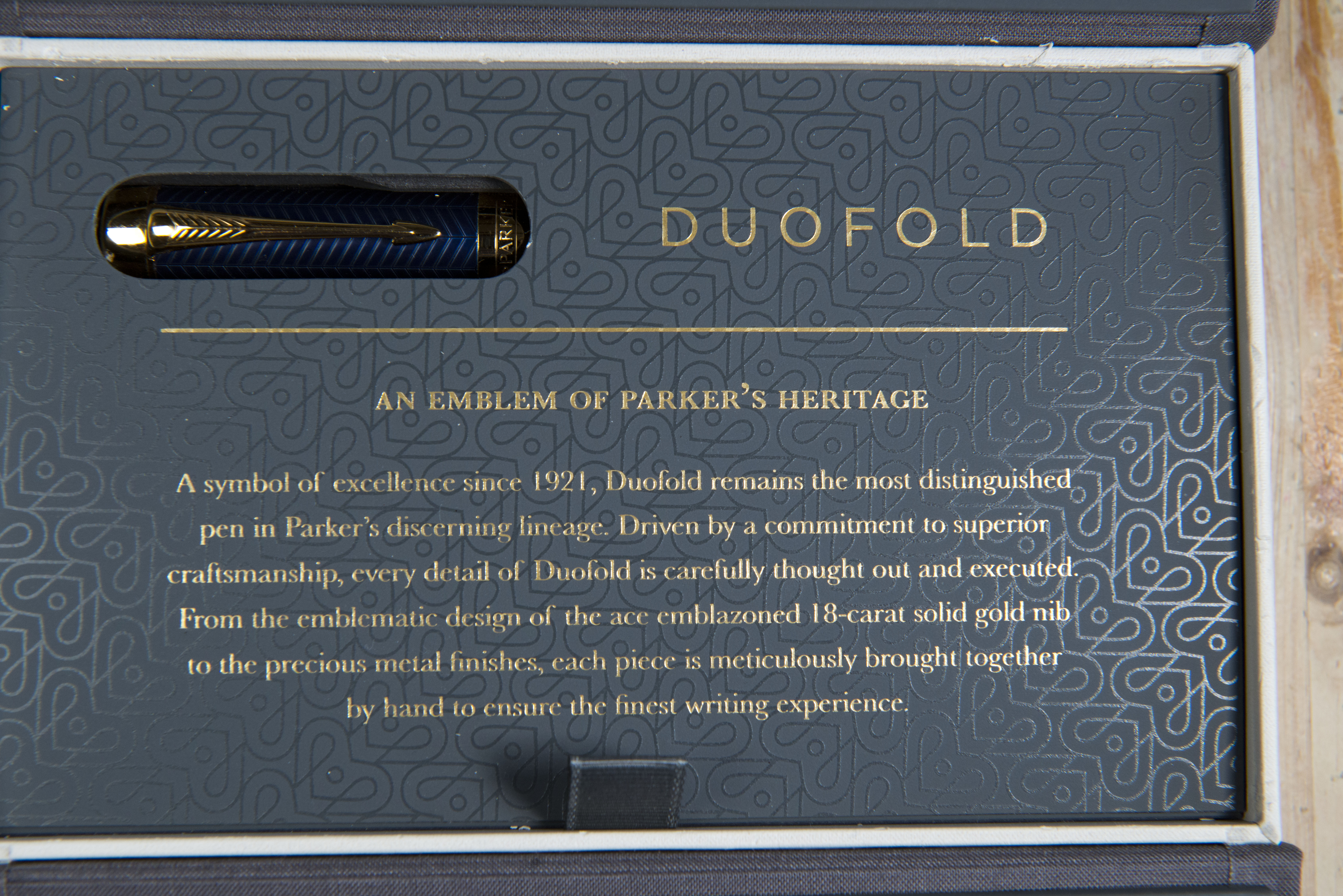 Remove the card and you see the pen in all it’s glory as well as a booklet with a cover that looks and feels like the rest of the inner surface material. A nice touch. The booklet, however, is just the generic how to fill guide in a multitude of languages. Underneath it is a pair of black cartridges. The pen comes with one of their delux converters already installed (Parker have at least three different converters at different price points – piston, standard and deluxe (in cost order)). 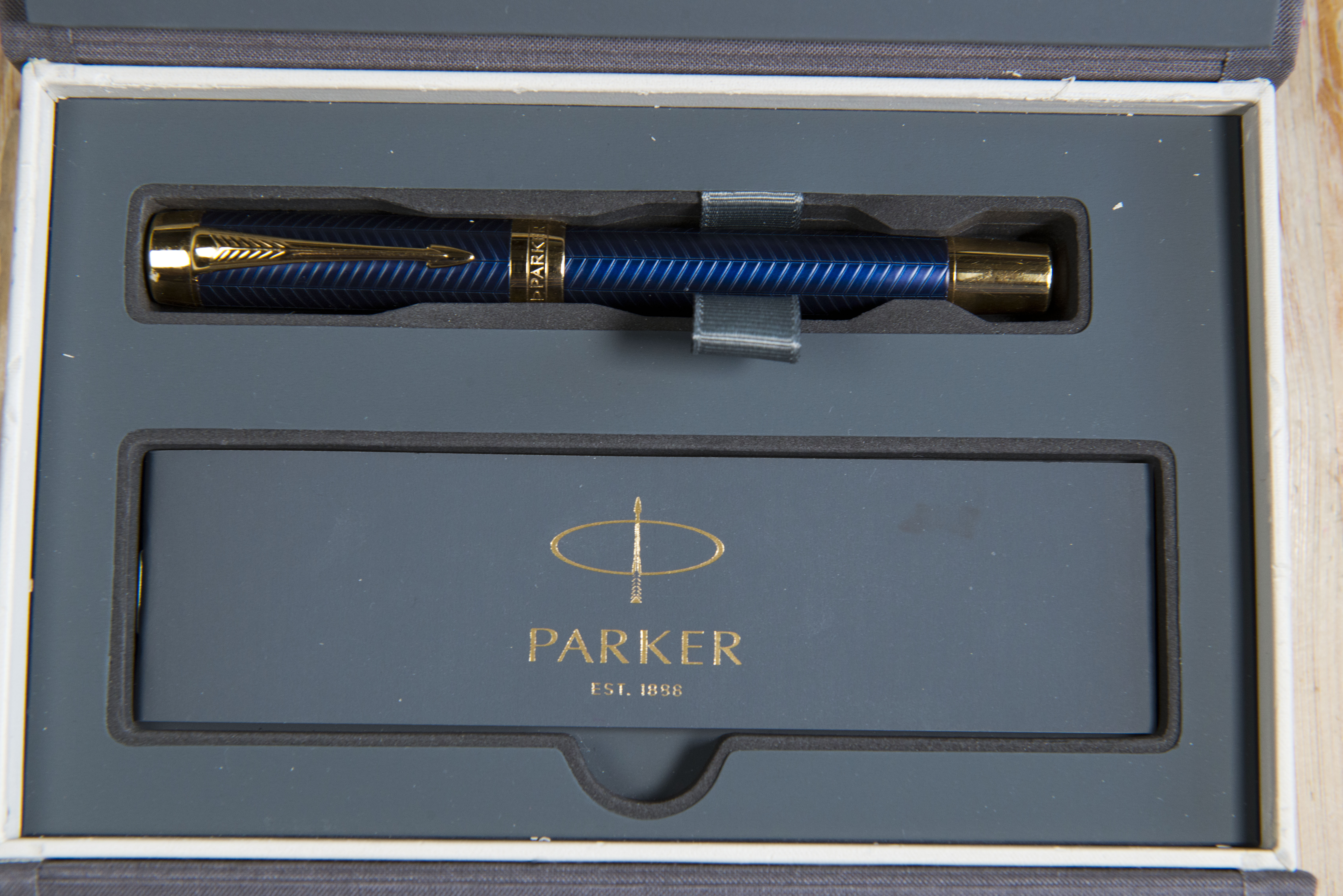 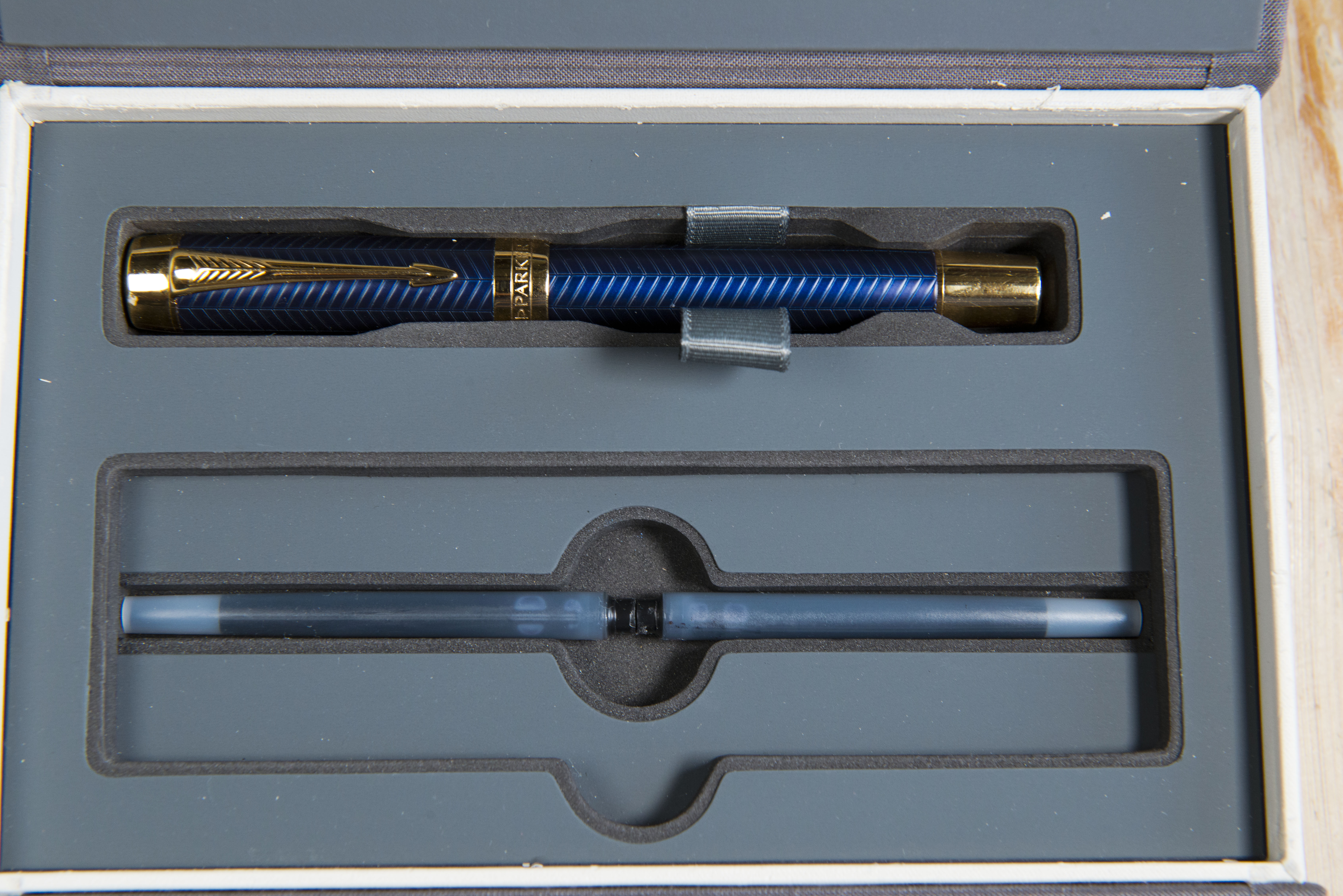 In the flesh, the pen looks rather smart. The gold coloured fittings work rather well with the metallic dark blue cap and barrel. The chevrons add a touch of subtle class and also create a nice texture when capping and uncapping. The clip is the classic Parker arrow and is attached by a ring mount at the top. From a casual glance the ring actually just looks like a step in the finial band and keeps with the classical appearance. The clip does work well.

Removing the cap (two turns for those interested and to whom it matters), reveals the thread and also the section, which has a shallow taper towards the nib before rapidly angling back out again. It is slightly matt in appearance, compared to the rest of the bright work and you can see metallic ‘brushing’ below it. You can feel the difference in texture only if you concentrate and as a result I found it provided a very pleasant experience when holding the pen. The section length means my forefinger does not touch the threads, which can be noticeable under the thumb, however after a short while you stop noticing their presence. Certainly there are far worse metallic threads out there, even in higher level pens. 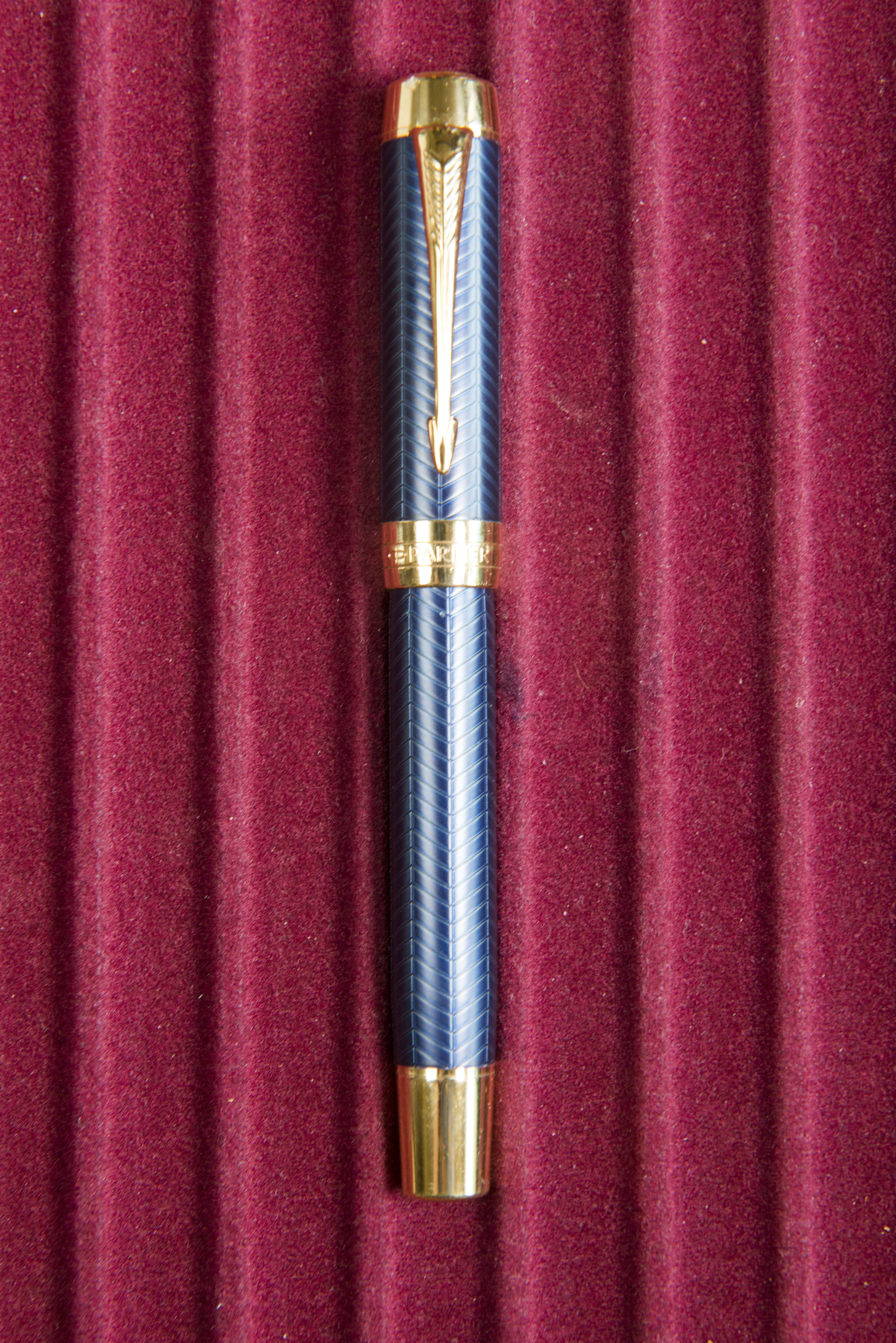 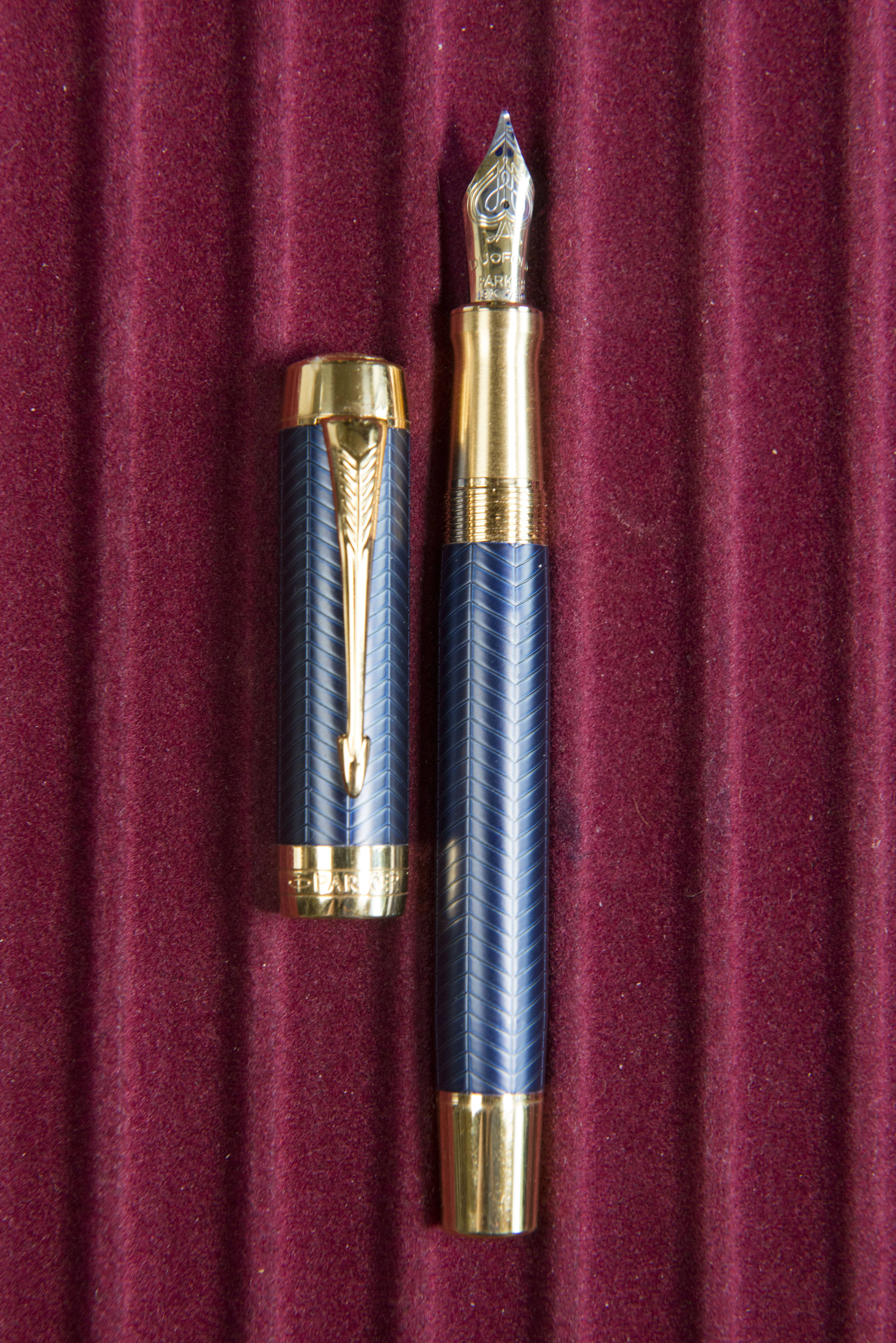 In the hand, with a classical tripod grip, the balance is actually towards the back of the pen, just before the crook. Being brass underneath the patterned outer material it is a relatively heavy pen. I found I could use it for a reasonable while, but someone with smaller hands may find the pen back weighted and uncomfortable. The cap does securely post and the balance point only moves slightly further back, showing how light the cap is compared to the rest of the pen.

As previous mentioned, the pen comes with a converter already installed.  Unscrewing the barrel does prove to be some what of a challenge.  It requires a lot of force to open it the first two to three millimetres, and the same with closing.  Beyond that is fine.  The reason is the presence is a rubber gasket/ring in a dedicated slot. I can see no reason for this. The threads are metallic so this pen can not be filled as an eye dropper. All I can think of is Parker have found problems with their converters and cartridges sealing properly and/or barrels coming lose. It does make filling the pen a chore.  Note, while Parker cartridges have large capacities, their converters do not hold much ink, so if you’re going to use this pen to write a manuscript, the struggle to open/close the pen to refill it will become a big issue. 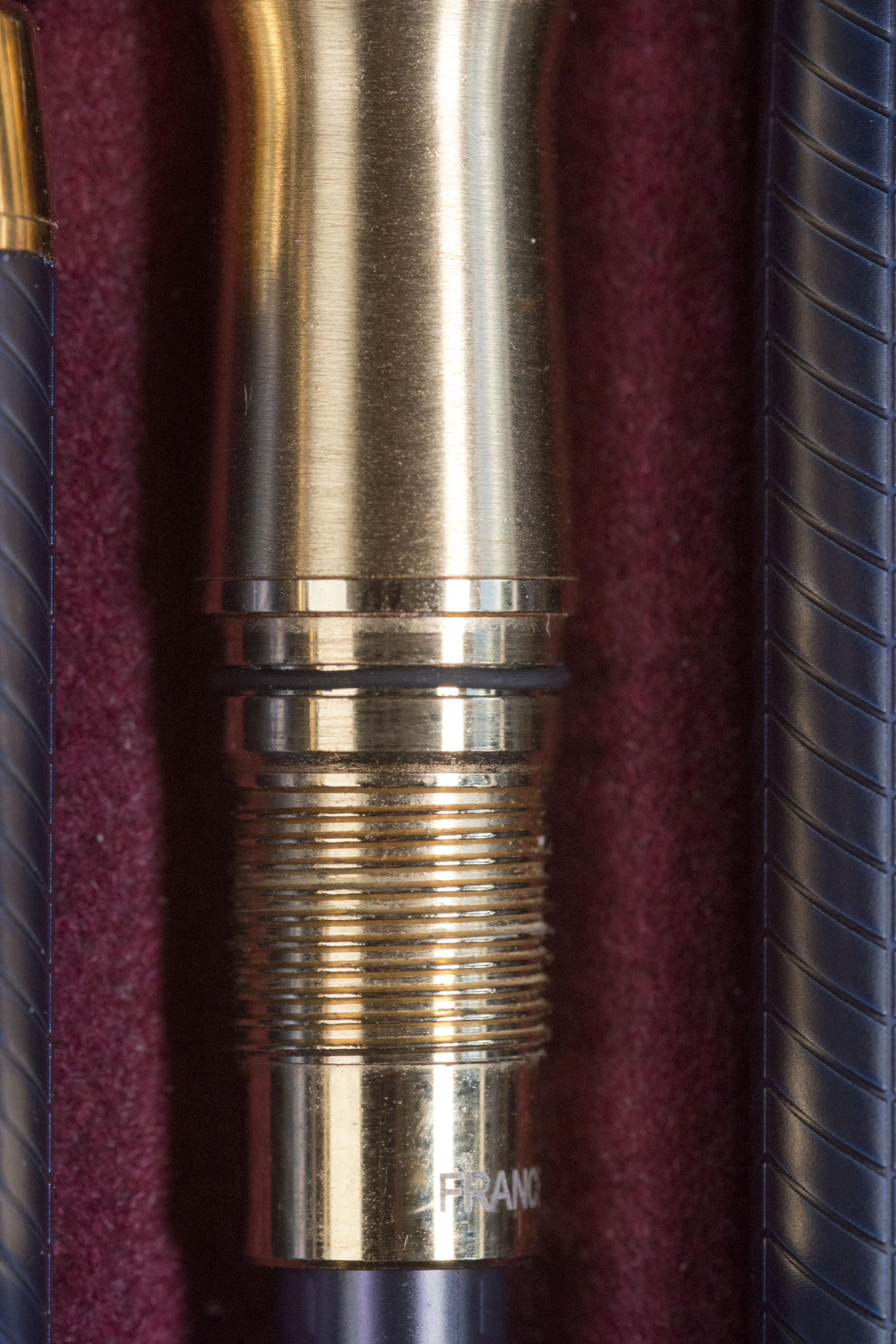 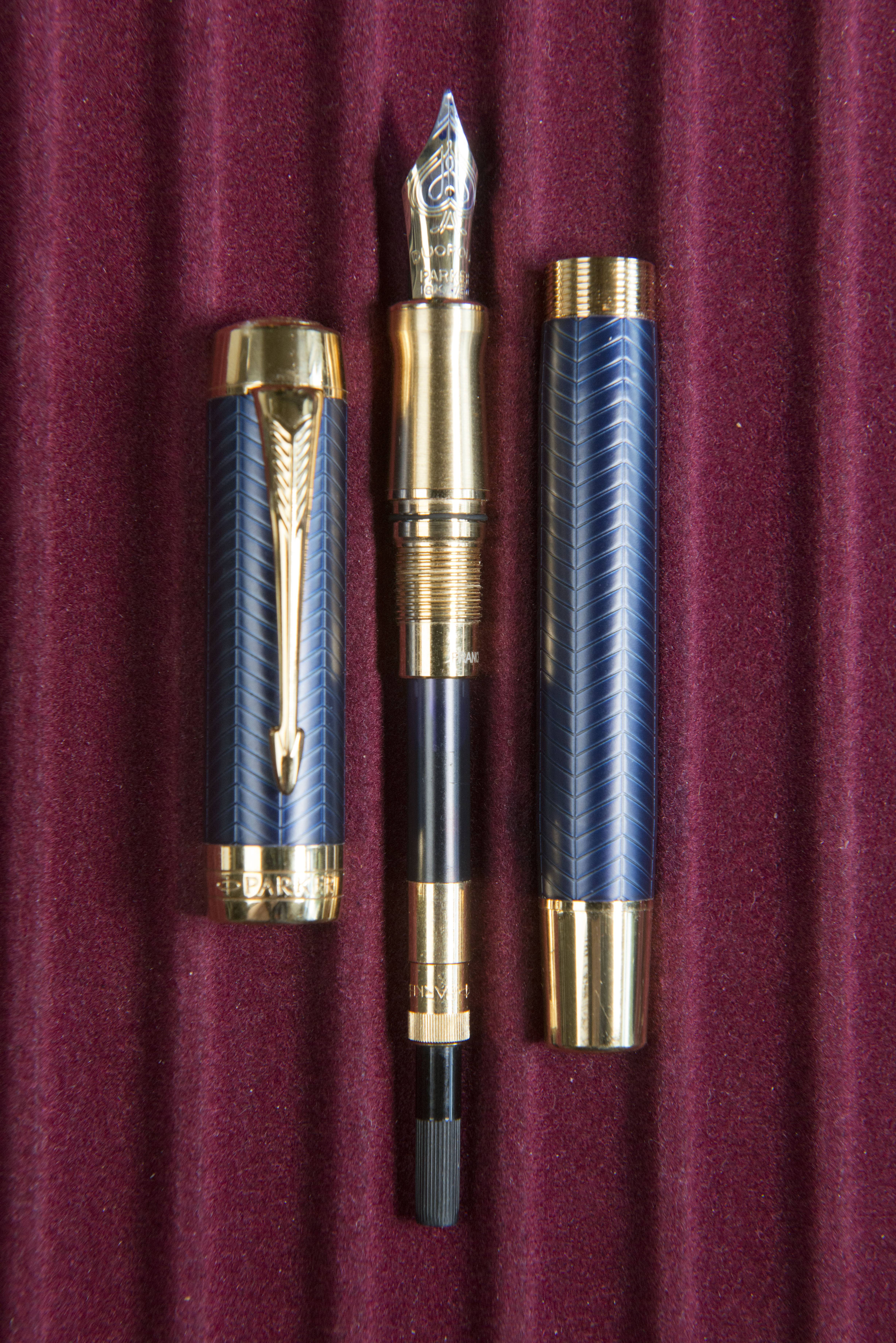 The writing experience was a lot better than I expected it to be. The pen is comfortable to hold for periods of time. There is a pleasant tactile nature to the barrel, and the ink flows well. However, the nib itself might as well have been made from steel rather than 18k gold as it has absolutely no give, as well as a very neutral, née characterless, nature. Visually it looks good, so if this were to be my only luxury pen I might be happy. There is another problem though, a real elephant in the room. It is noisy. I mean really noisy. Not in a scratchy sort of way, but depending on the paper you get anything from a grating to squeaky noise, which is odd as the pen does write smoothly. The feed is plastic, which on a pen at this price point does surprise me, but it does it’s job well. As with most Parker pens the nib size is stamped on the under side where many would expect fins to be. The lack of fins is not an issue as they are normally decorative and only cheap, poorly designed feeds require them for to hold ink to allow the pen to work. I personally think most manufacturers just include the fins on feeds as people expect to see them in place. 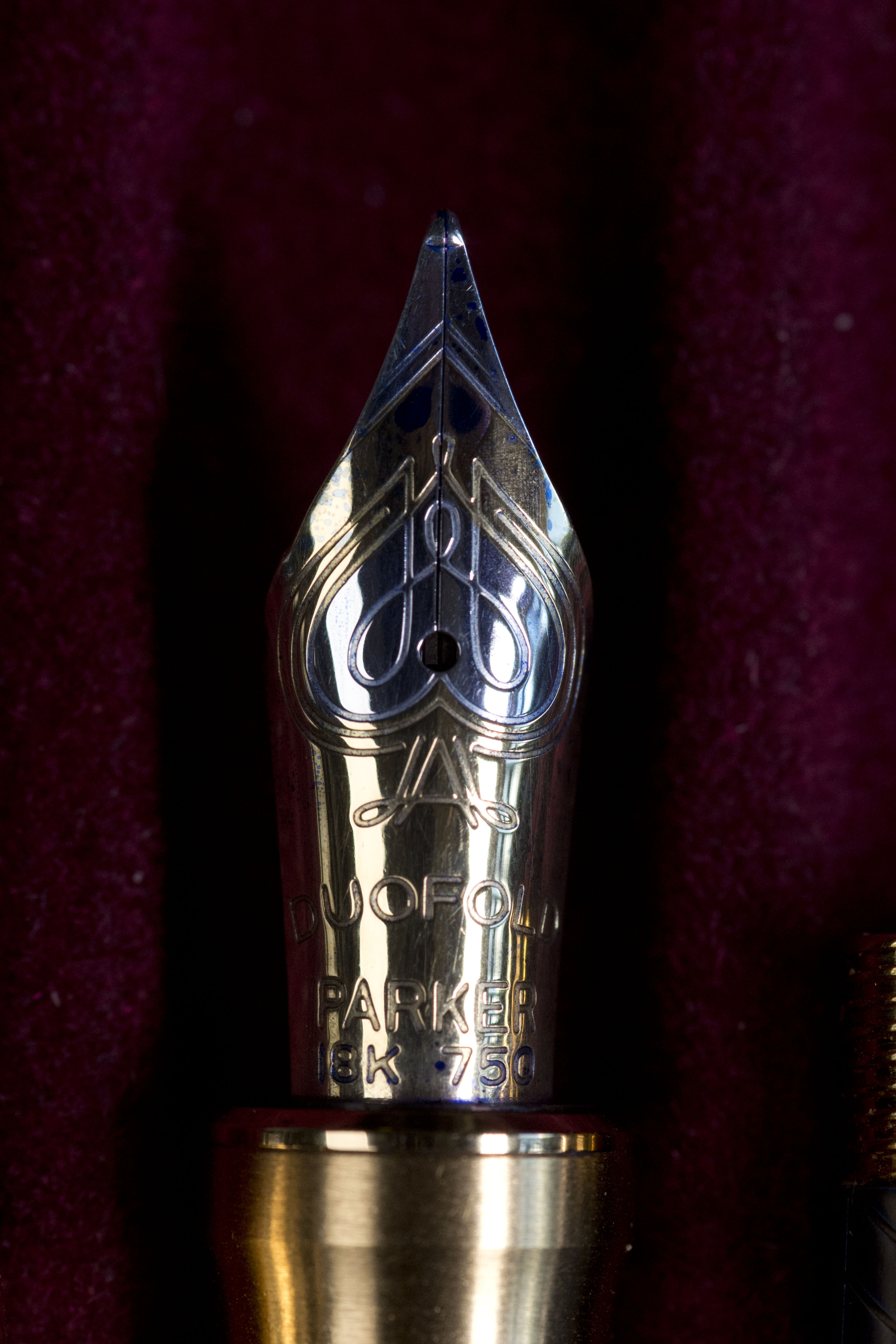 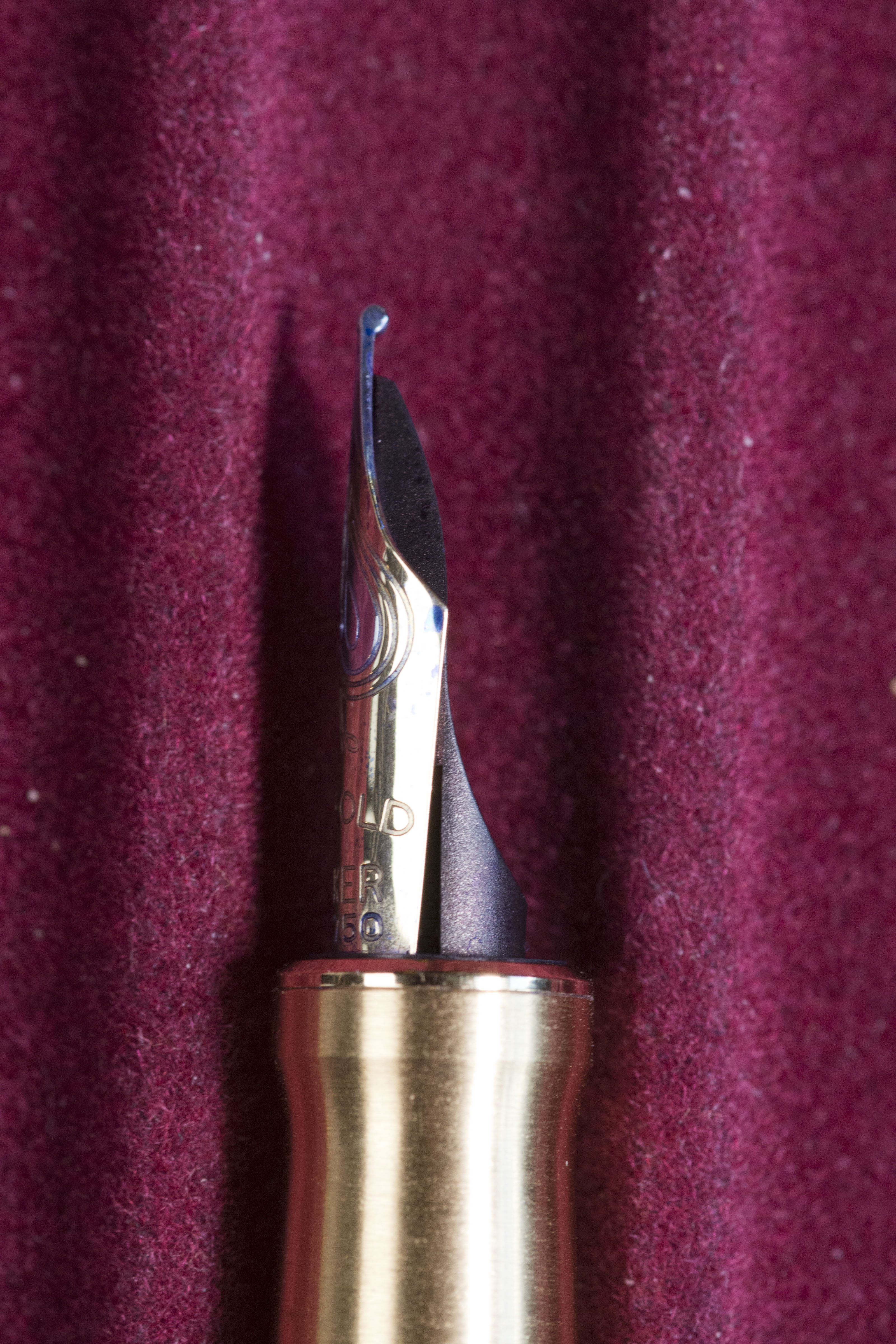 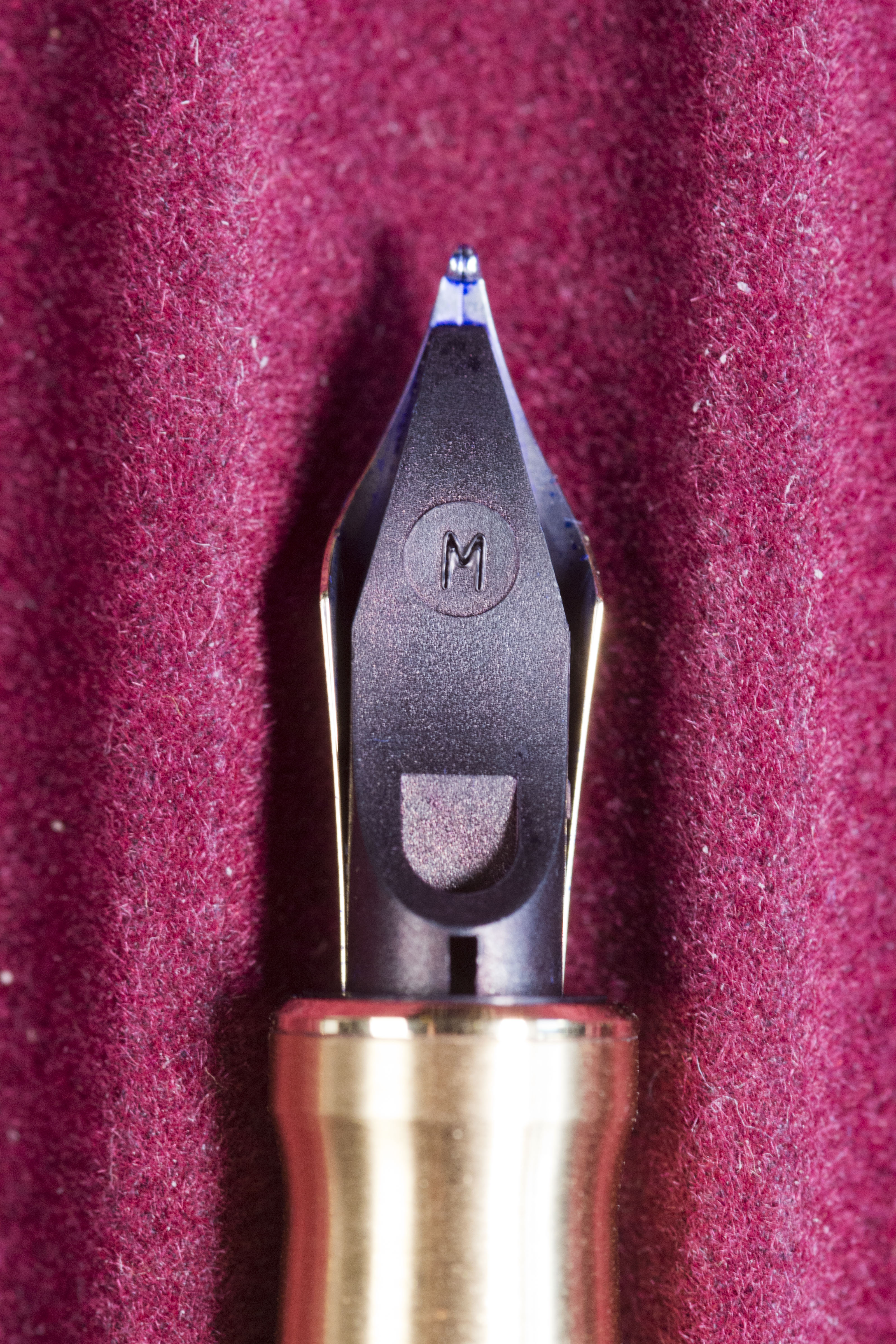 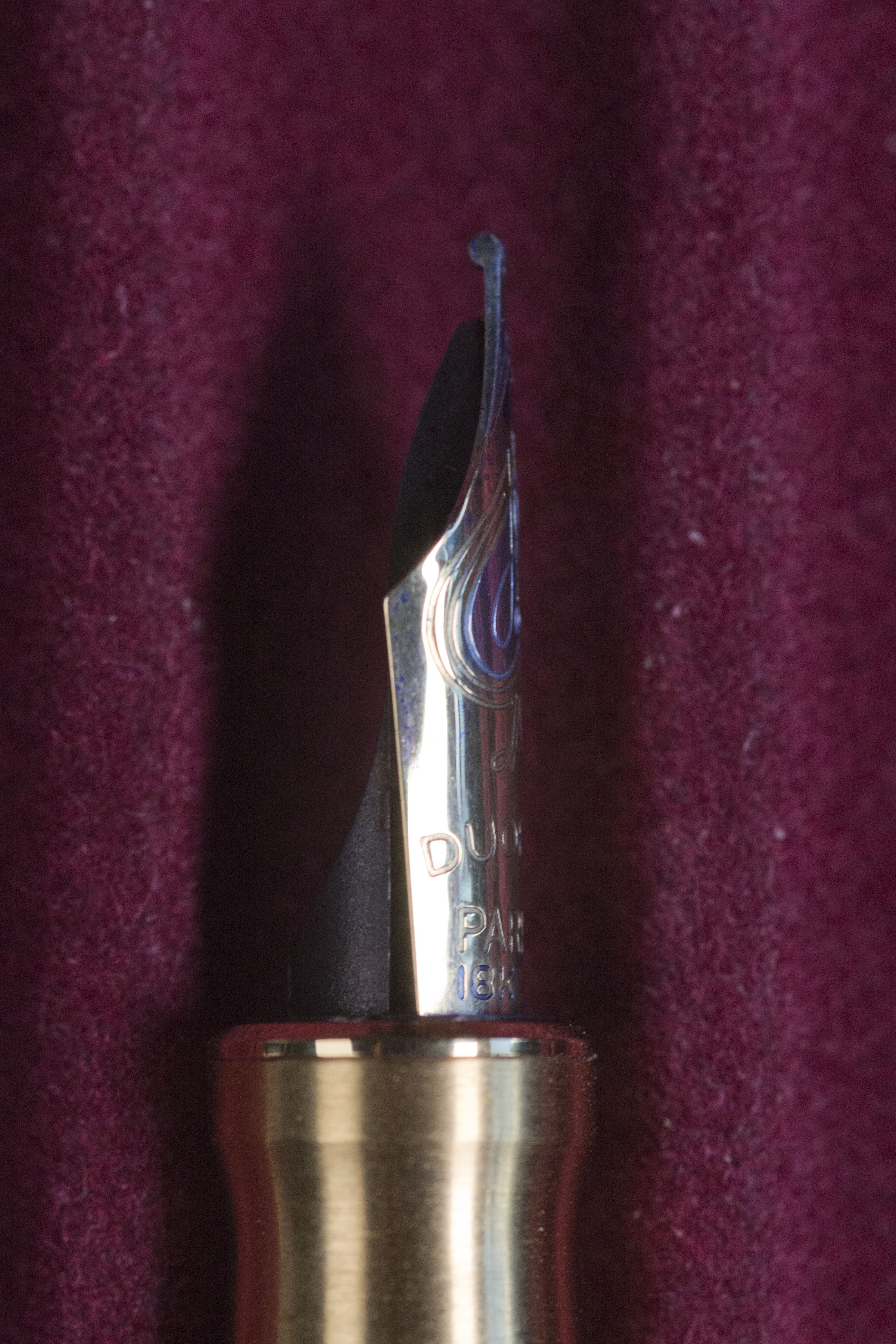 The cap finial includes the Parker arrow head and the word Duofold. The barrel one just has an indented disk. Both suit the looks of the pen. 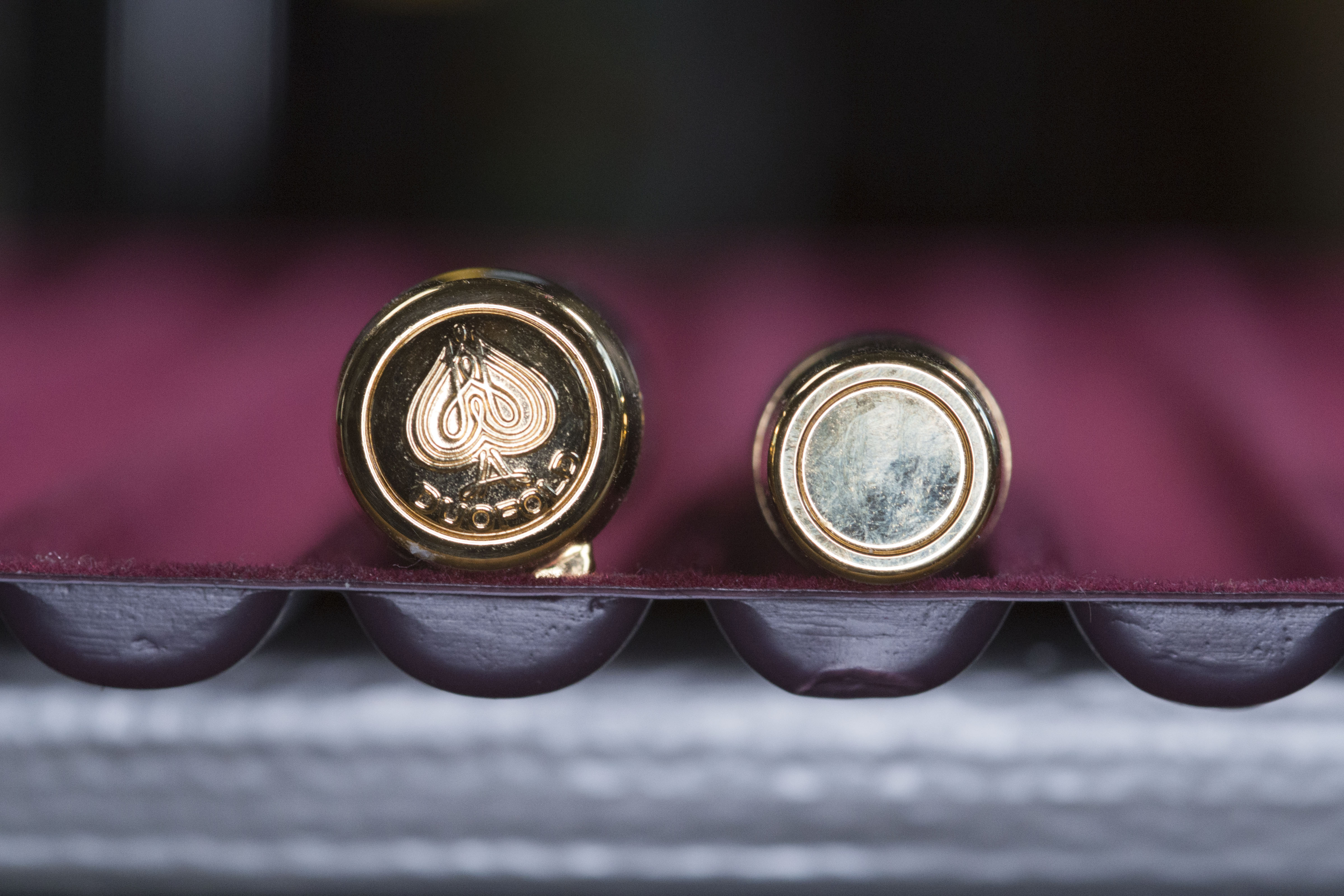 The cap band has Parker and the emblem on one side and France on the other, both sitting between two rings. Both look like they were machined, not laser engraved. 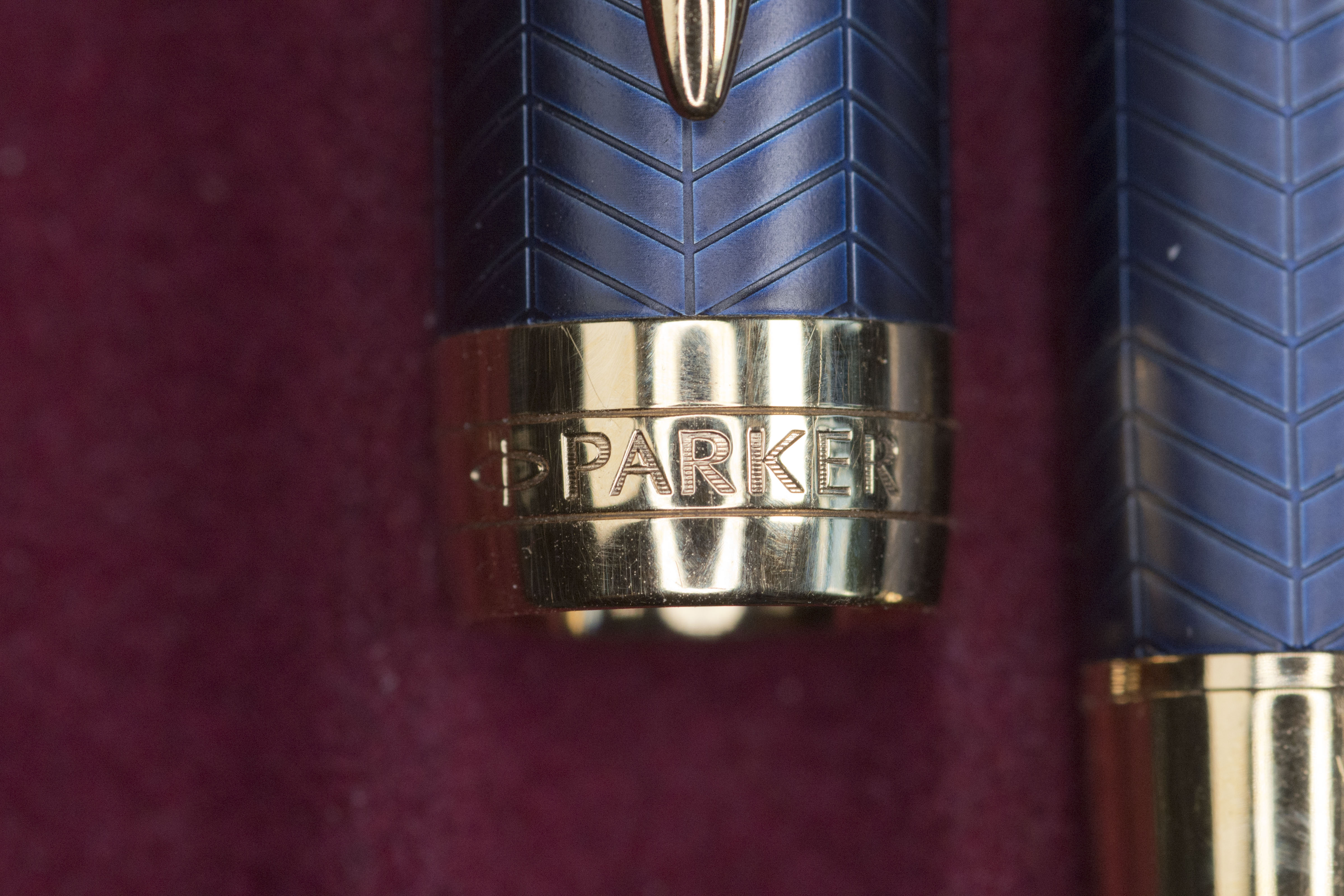 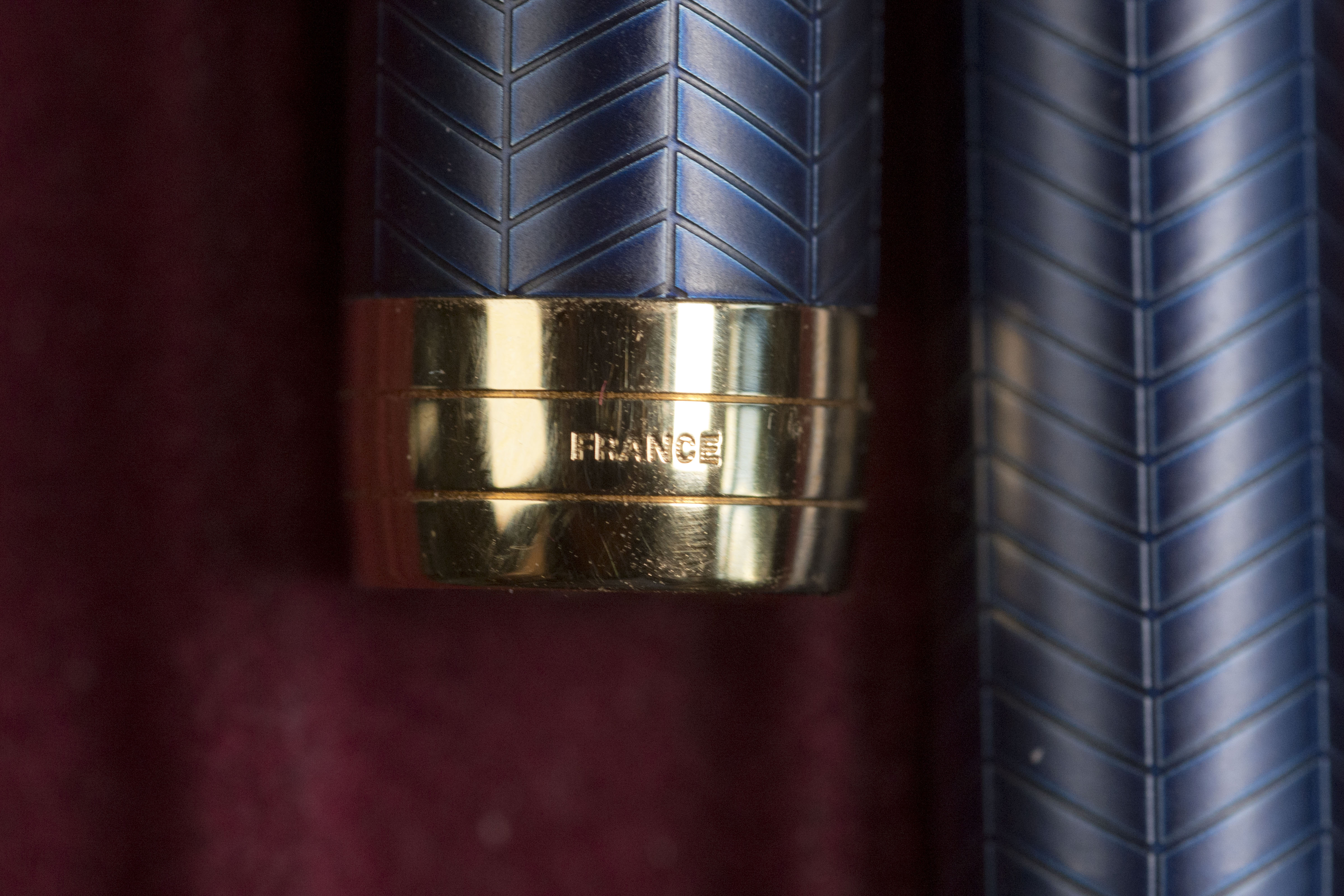 The chevron pattern looks good from afar and feels good, but when admiring the pen something did not feel right. The reason I found was because the cap and barrel only line up in one place. Taking a closer look I found it was because the designer has been lazy and just used one size of strip on both surfaces. The result is the cap has ten strips of chevrons, the barrel eight. This is really poor on a high end pen, certainly one at this price point. It smacks of a lack of attention to detail, just a design to make a product look expensive and quickly get it out of the door. 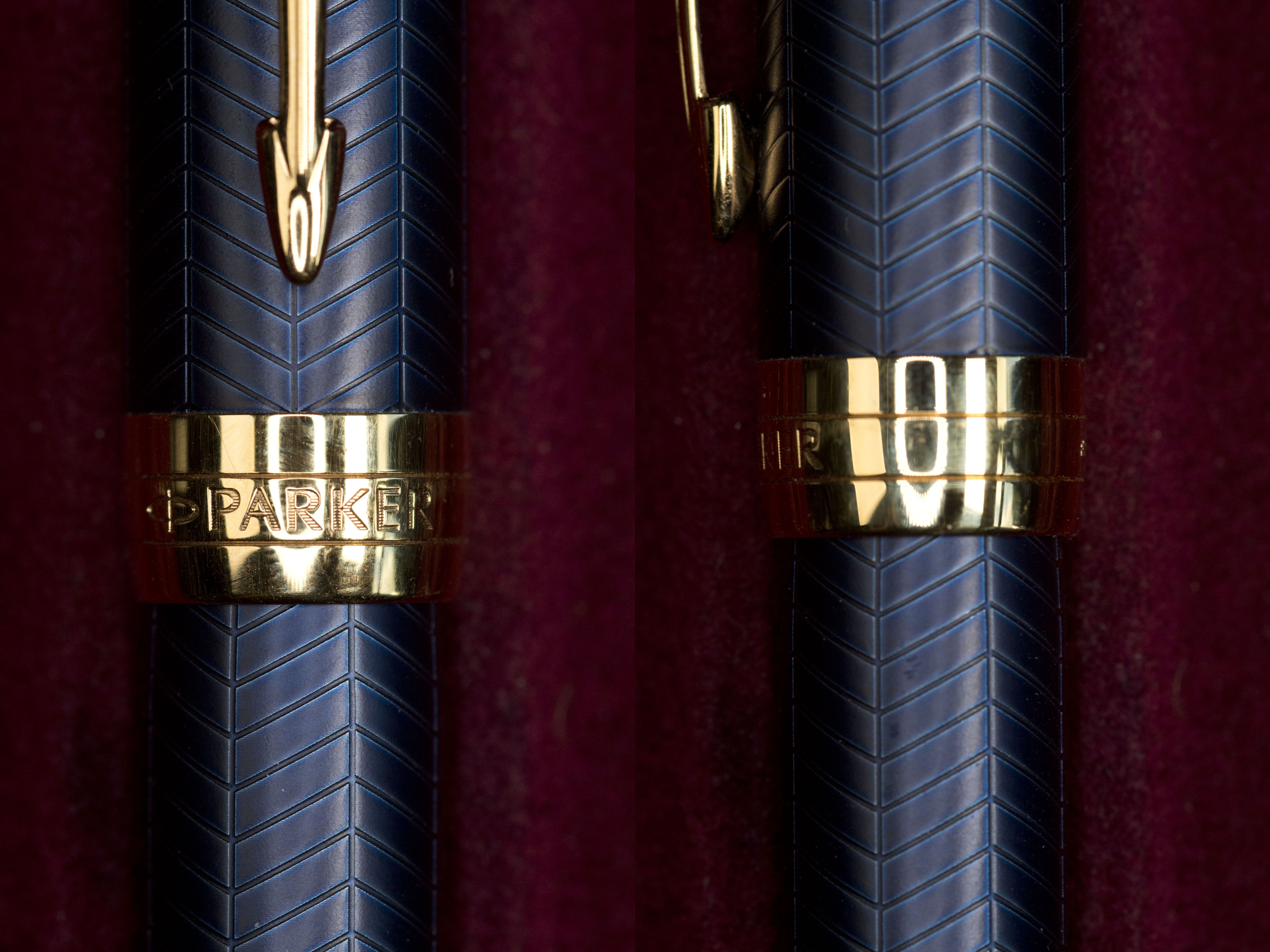 So the question is would I buy this pen. The short answer is no. The pen relies too much on its history as a marketing point. Size wise this is going up against the Pelikan M800 and the Montblanc 146, as well as the Graf von Faber Castel Intuition, yet in this version it is more expensive and does not have the same attention to detail or the feel of quality about it. Sure there are resin versions of the Duofold which are nearer to the price of the rivals, but they lose the apparent luxury of the metal body and the chevrons. Also, as much as it was a reasonable experience using the pen, the actual writing experience would have been anonymous if it weren’t for the annoying noise.

Now if this were to be a present for someone who does not normally use fountain pens then is could work well (assuming the noise is just the nib in this specific pen). Without the experiences of the pen fan to compare with, this would provide the ability to comfortably write for long periods also while looking good on the desk and feeling solid in the hand.

For the size comparison pictures I’ve also included some of my own Parkers and also some rival British pens (which are actually made in England). 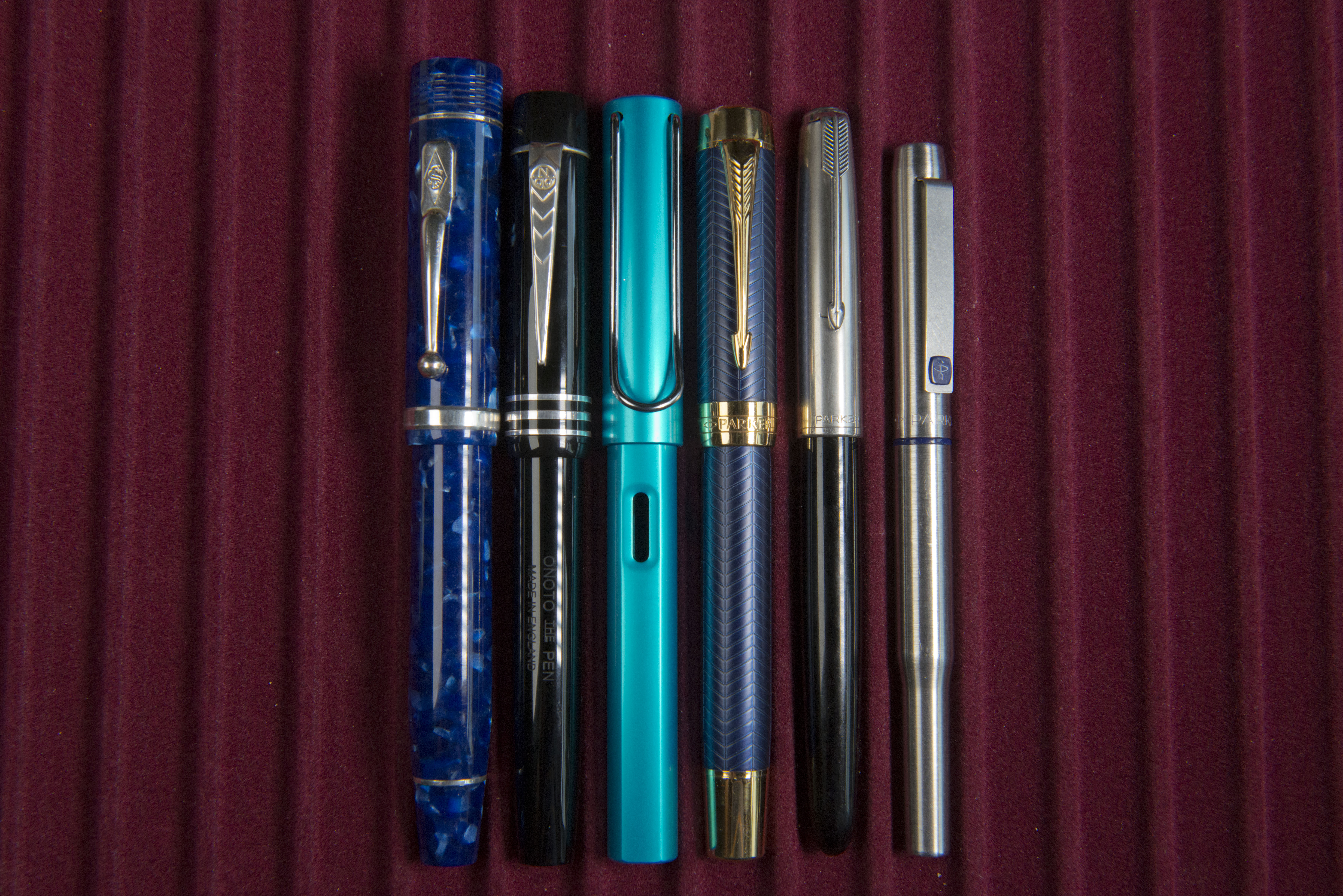 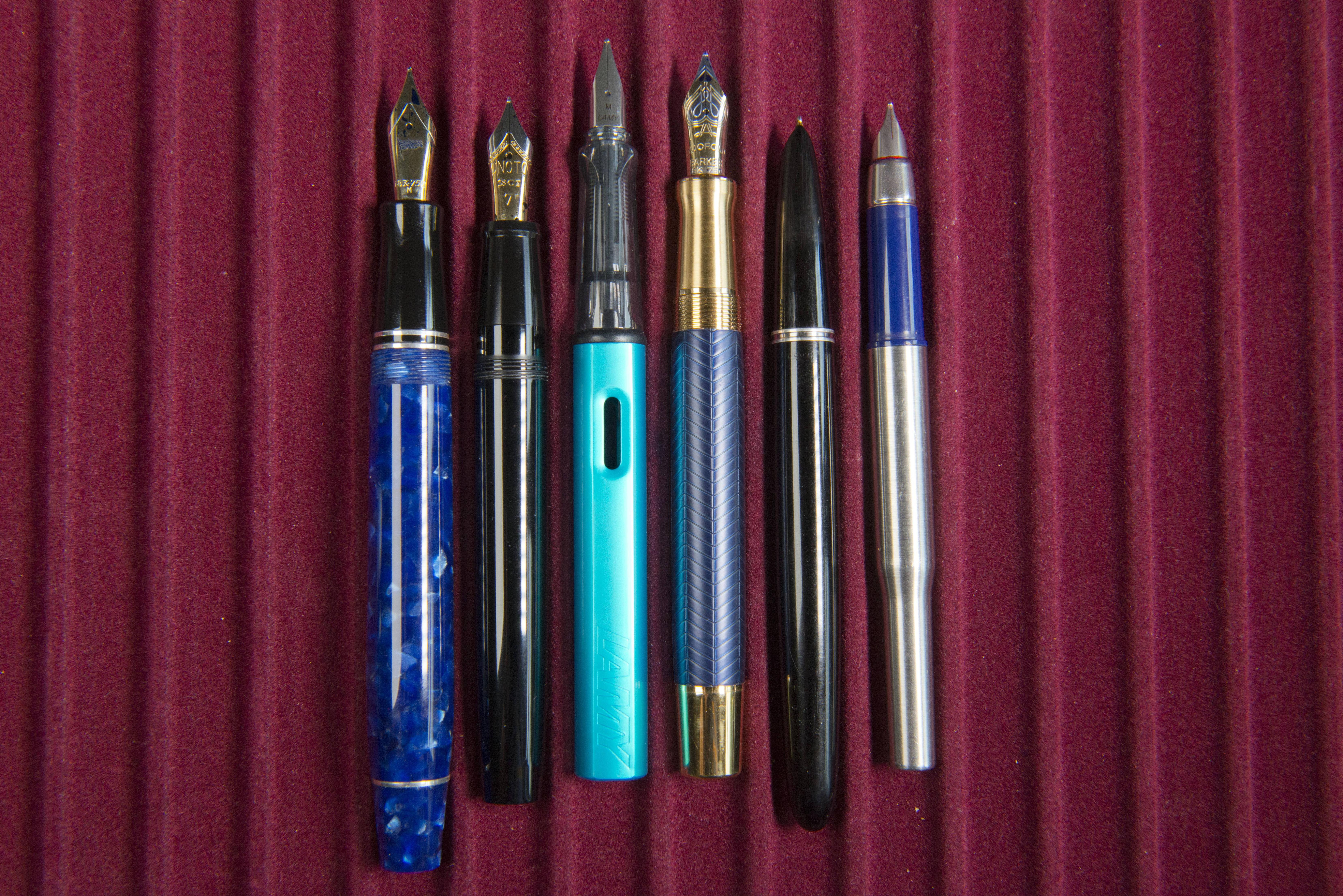 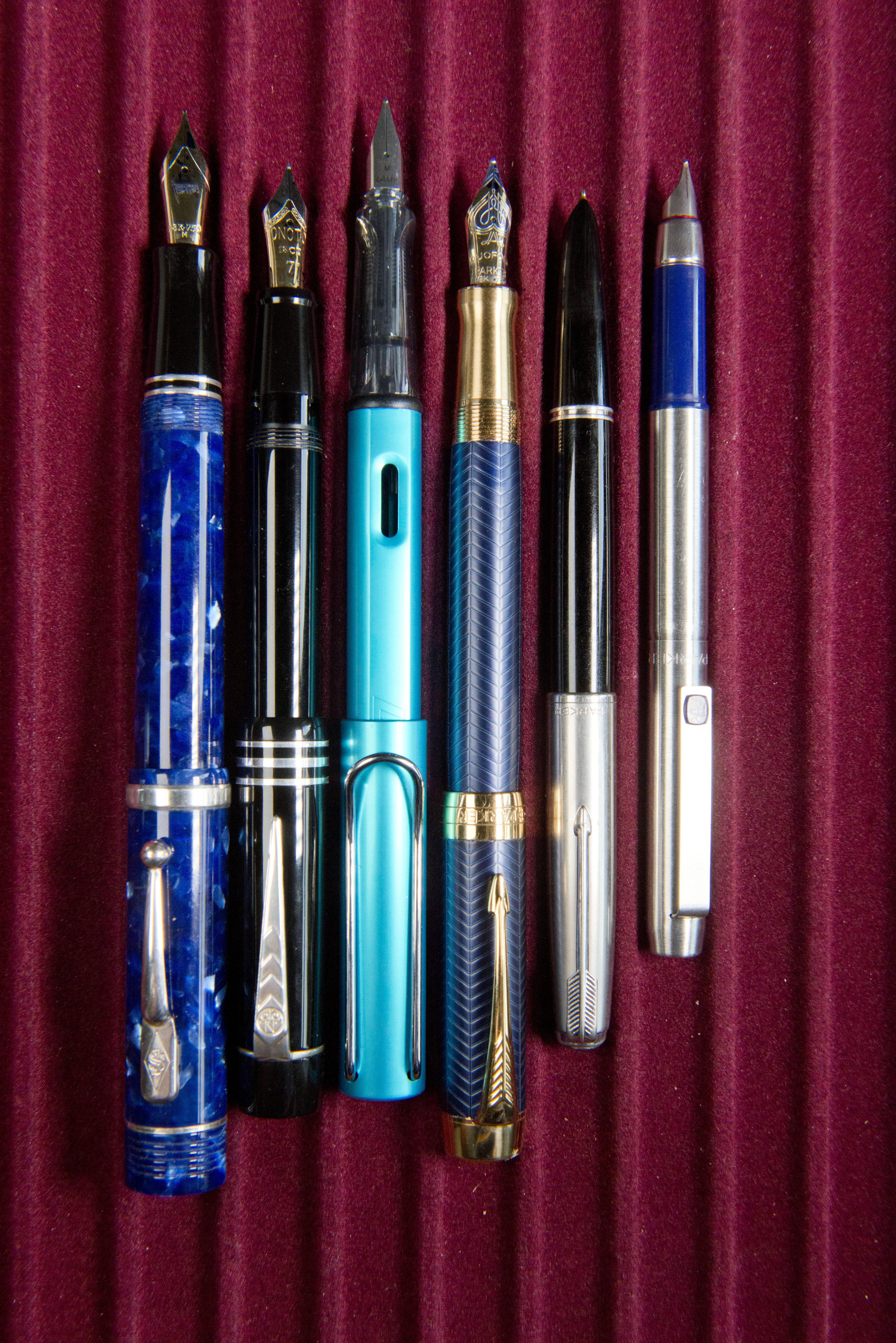 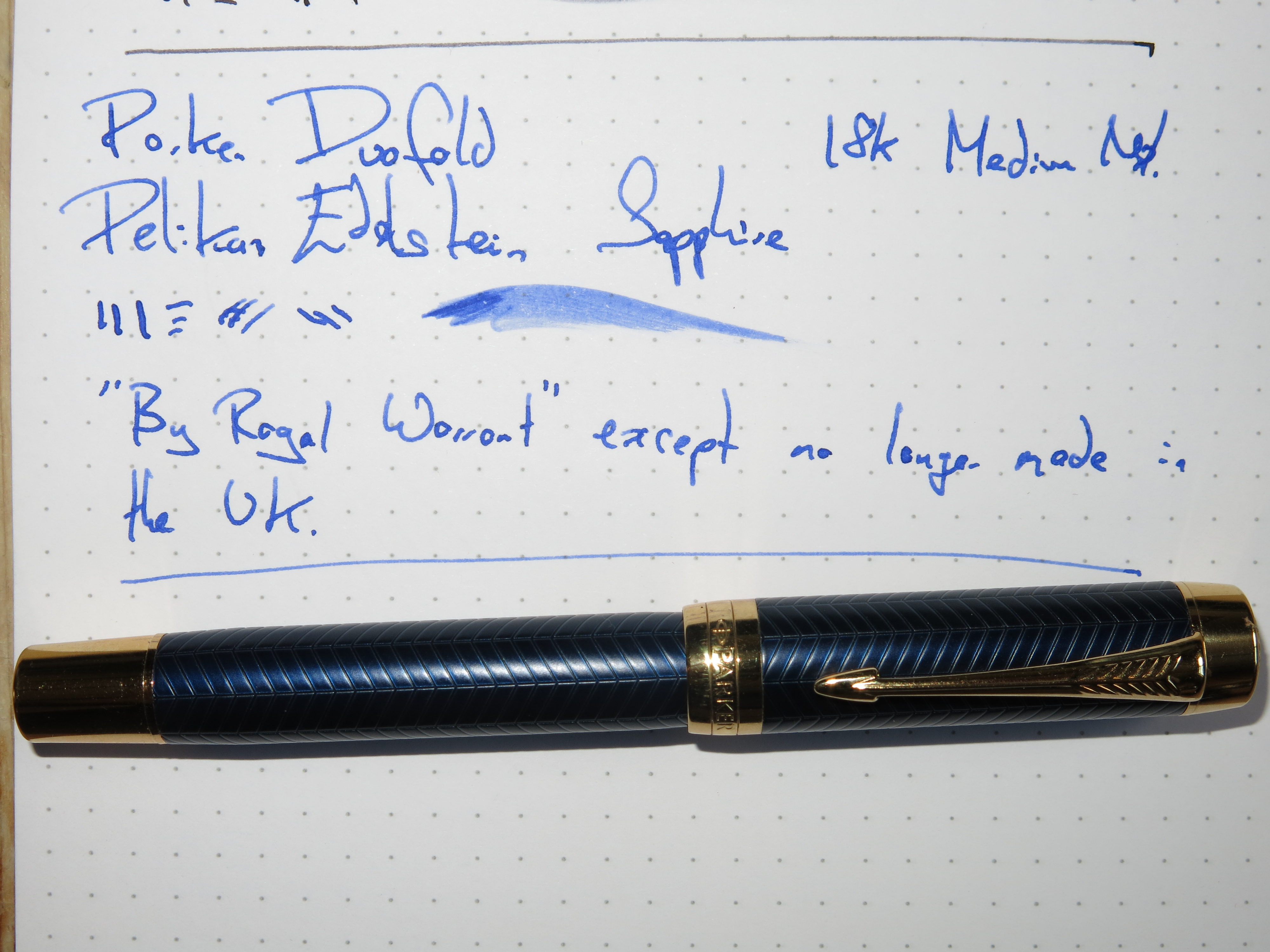