Fine Writing International is a Taiwanese stationary store which recently started to sell their own pens.  Released so far are the Planets series and the Bronze.  The main difference is the former has an acrylic cap, grip section, and barrel rear, the Bronze has the same components in brass (which does make you wonder about the name).  The barrel is a clear acrylic.  Both versions come with a decent converter and can also be turned in to an eye dropper filled pen, with a rubber gasket ring being provided on the grip section threads.
The Bronze is actually a limited edition release.  Not numbered and presumably large enough numbers of each batch are produced.  The first and second (201901) versions have octagonal caps and barrel rears, where as the cap on the recently released third version (201902) is of a more traditional rounded shape, though with a pair of dimples at 180 degree to each other on the cap to act as roll-stoppers. 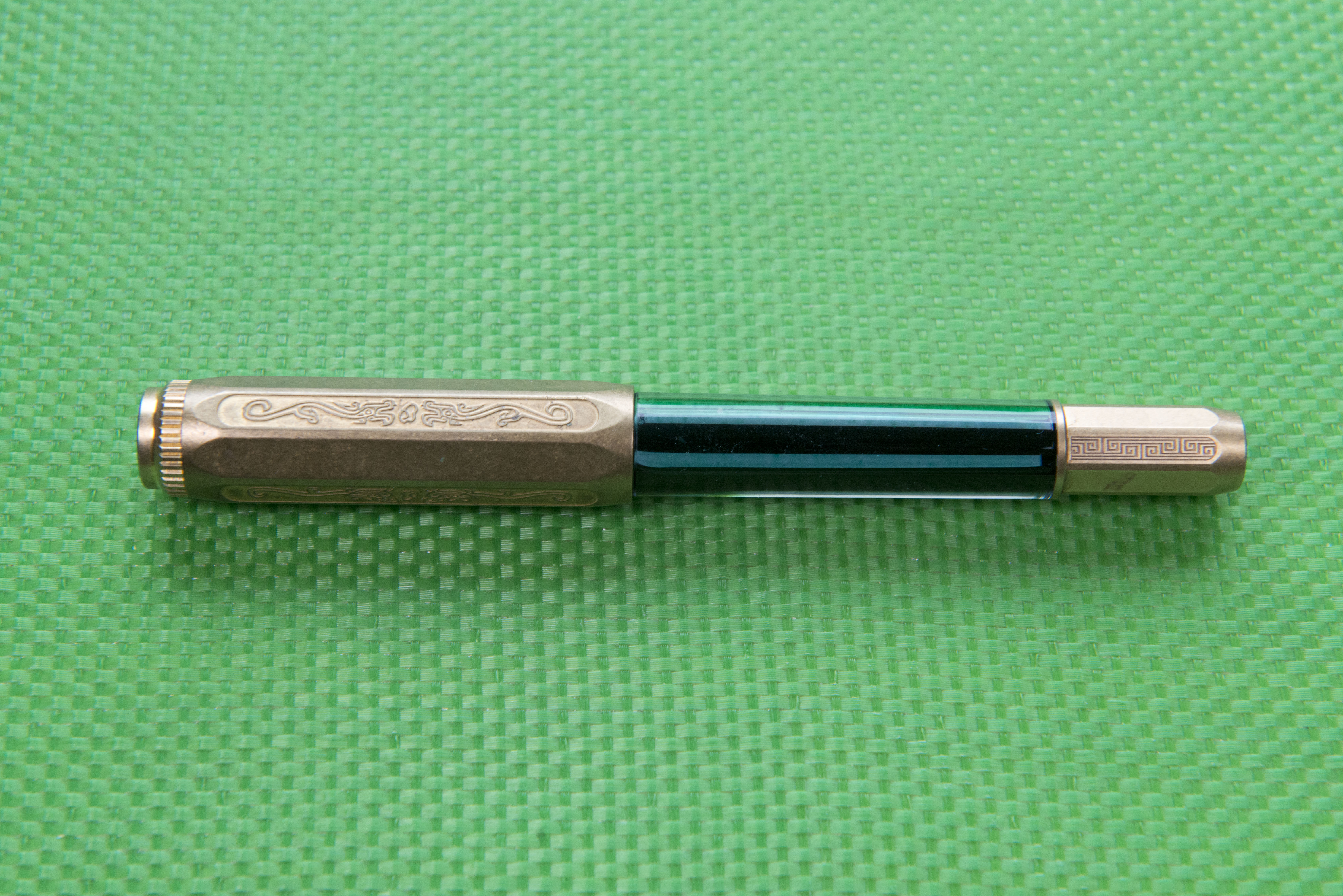 The pen is heavy, though once uncapped you soon discover over half of this is in the cap (29g compared to 26g) .  The brass grip section and barrel back balance themselves out quite nicely, so in the hand is it a surprisingly pleasant experience to hold.  Lets be honest though, you’re still holding a hefty pen so do not expect to use it for more than short note taking.  Having said that, the lack of a clip and the hexagonal cap do make the Bronze and ideal candidate as a desk pen. 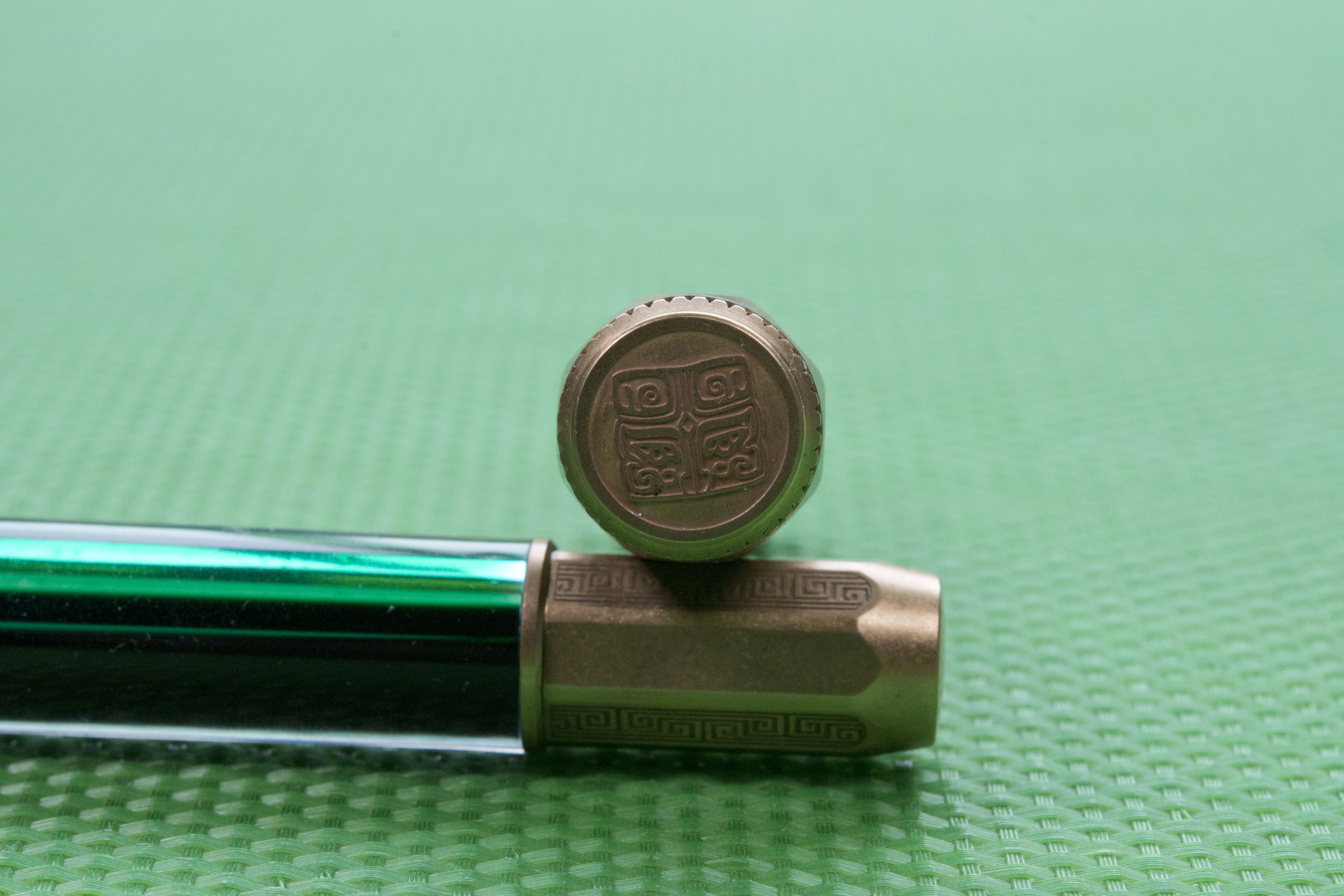 The cap has the eight sides, with soft rounded edges between them.  These taper out at either end.  On every alternate side there is a pattern of two dragons with dragon breath or fire between them.  Towards the finial, once the flat side has tapered out, there is a round knurled ring before the metal angles in towards a smaller diameter ‘disk’.  The appearance is almost like a small dais.   The cap finial contains an embossed face of a lion or dragon, though you need to look closely to recognise this (probably more obvious to some one from Taiwan, China, Korea, etc.). 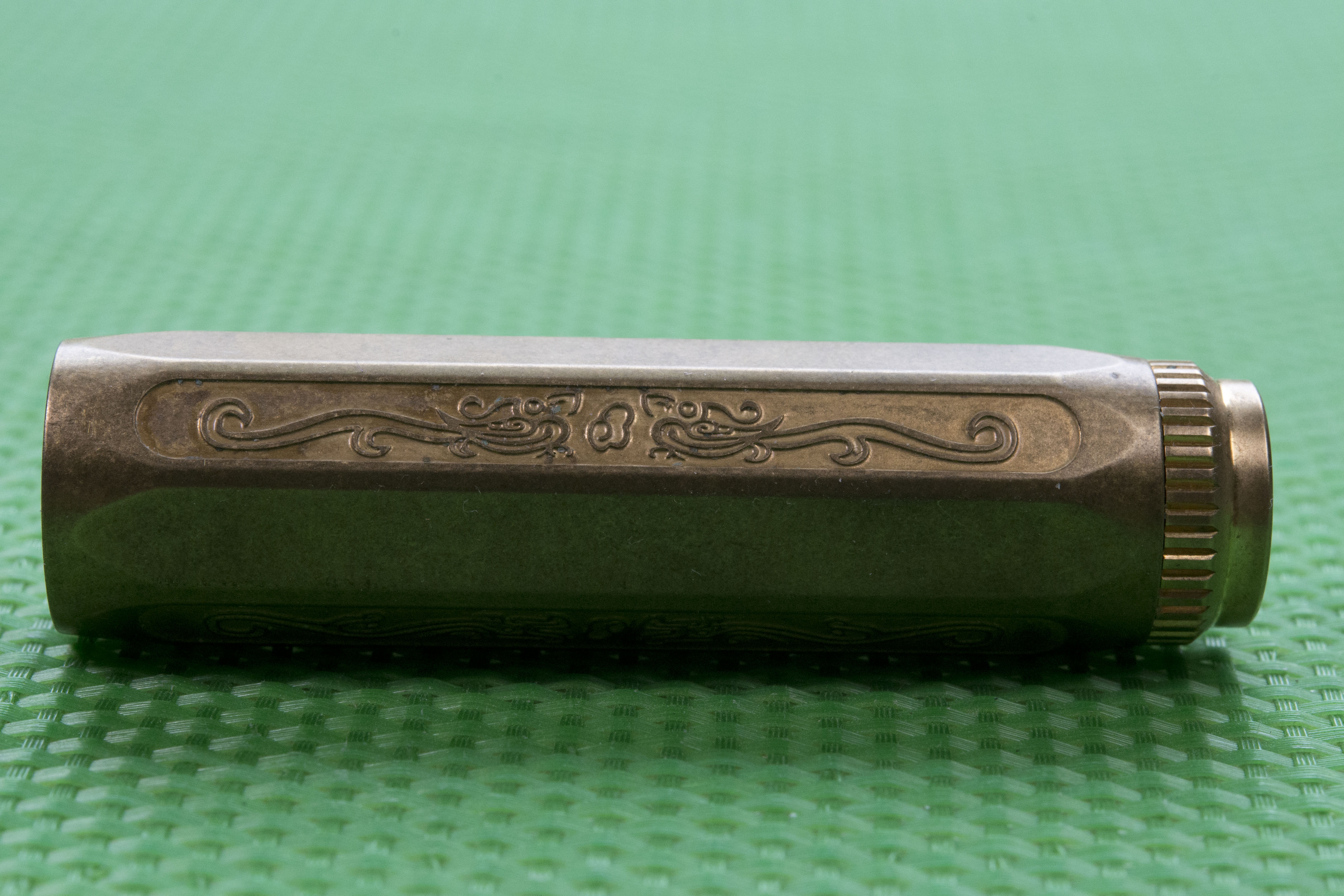 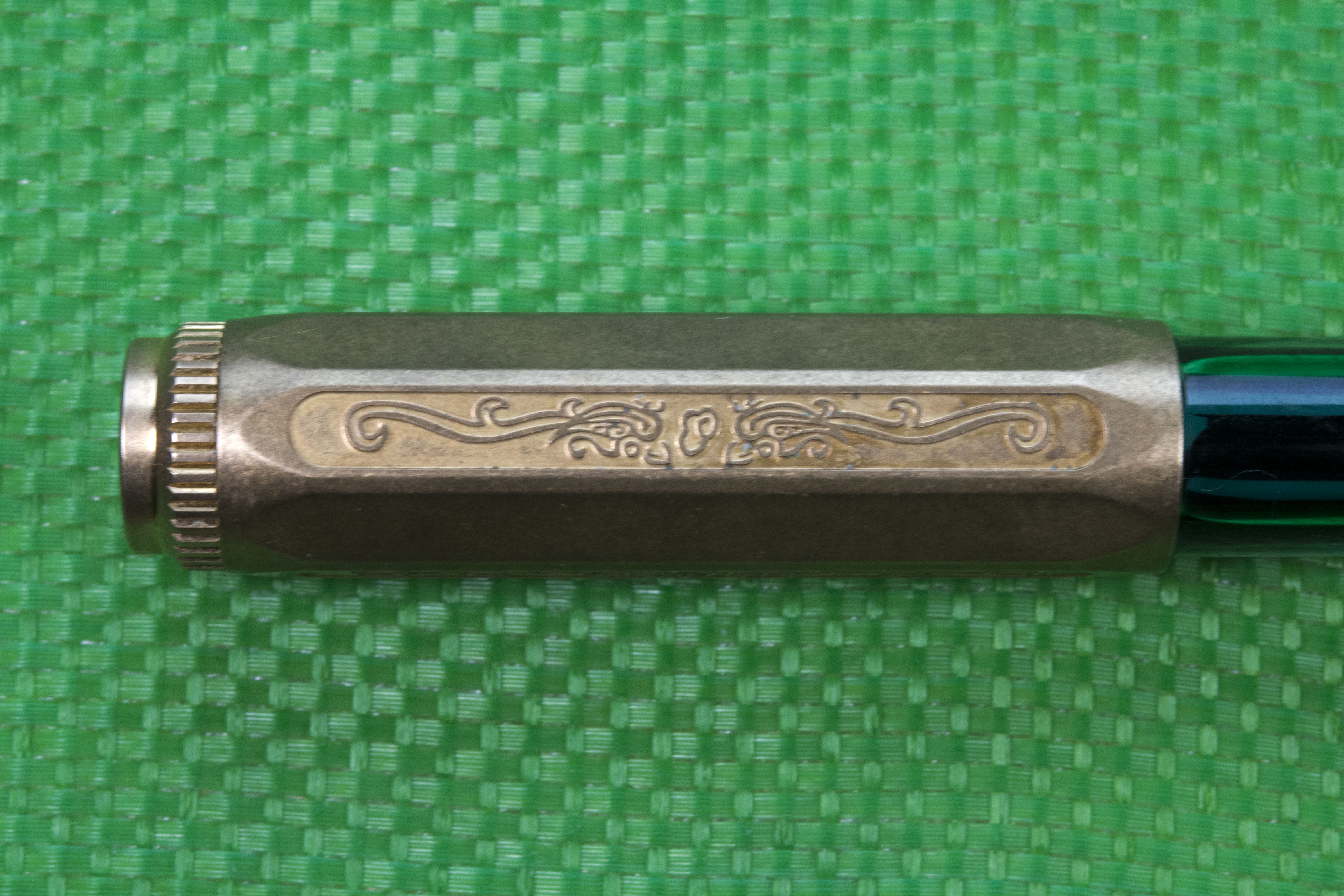 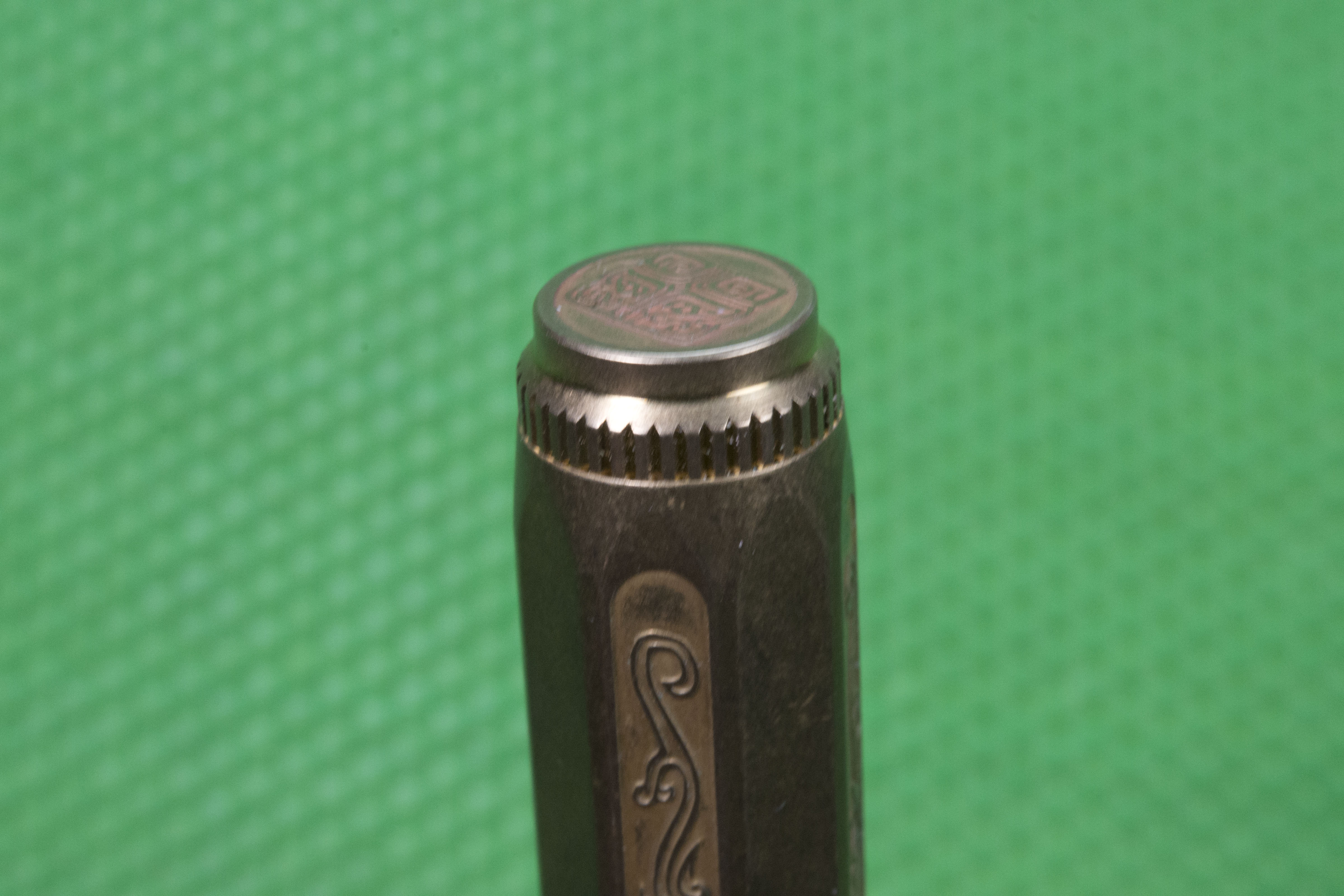 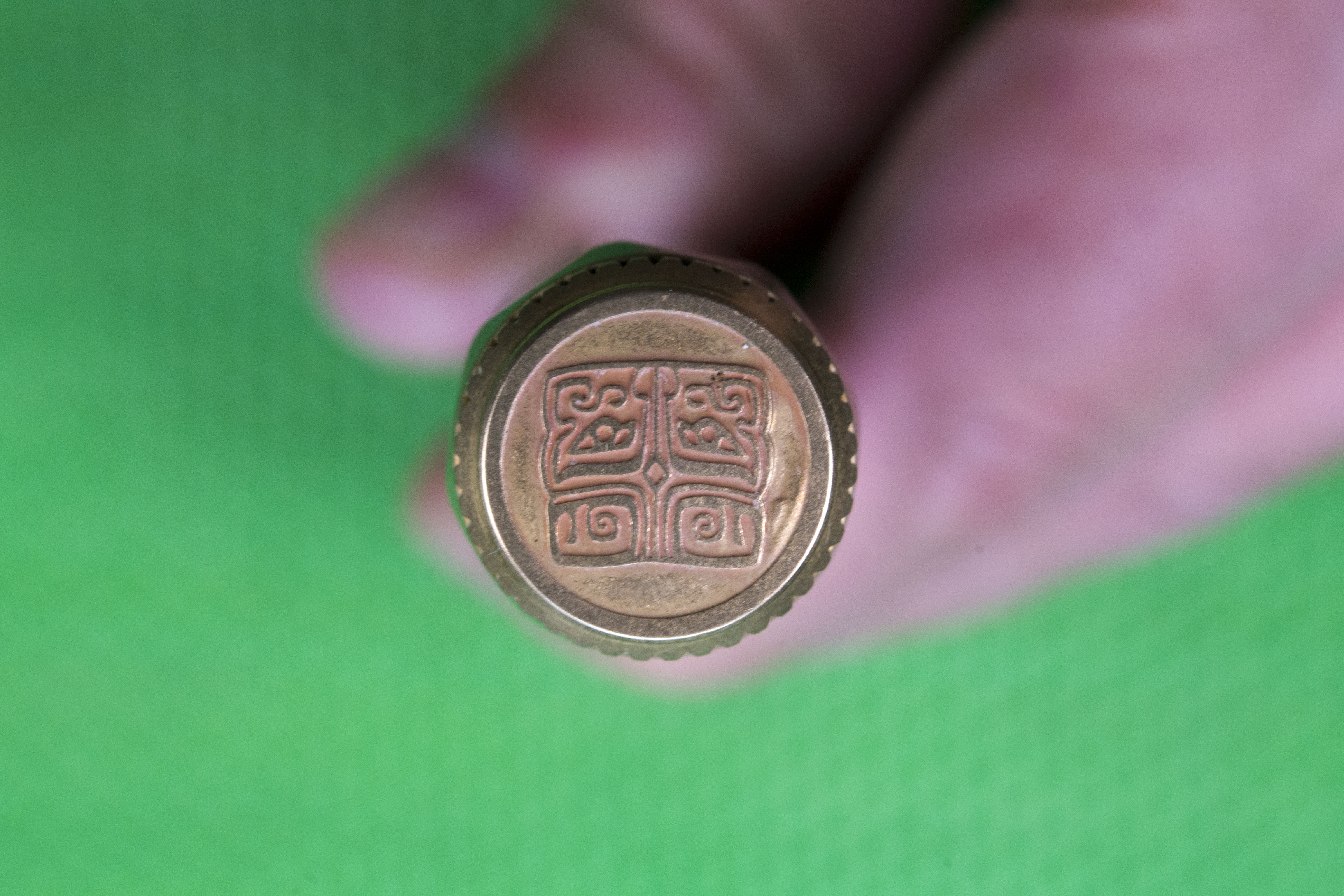 The grip section is a simple short piece with a slight angle, which has a lip just before the nib.  Where is meets the barrel the threads feel like they are almost a natural progression, and while being noticeable they are not sharp.  I do, however, feel them on the thumb when writing and they apply enough pressure with a gentle hold of the pen that the sensation does not dull with time.  This is not uncomfortable, but it is not ideal either.  The main section of the barrel is just a straight piece of transparent acrylic with a short step down before the threads.  It does taper in very slightly with the tail being a couple of mm narrower than at the step.  The barrel end is another piece of brass, and by the looks of things the barrel probably screws in to it (it’s locked firmly in place).  It starts with a brass ring the same width as the acrylic next to it before stepping down to an octagonal stretch where every second side (like with the cap) is patterned, though this time with an Oriental equivalent to the Greek key.  As with the cap, there are soft rounded edges between each side, which then tapers down towards the end.  The barrel finial is a plain disk.  I do wish the octagonal part was the same width as the end of the acrylic section as this would allow it to work as a roll stop.  As the cap takes two and a half turns to remove, you may want to put the pen down without closing it for a short periods, with the Bronze you will need something to stop it rolling around. 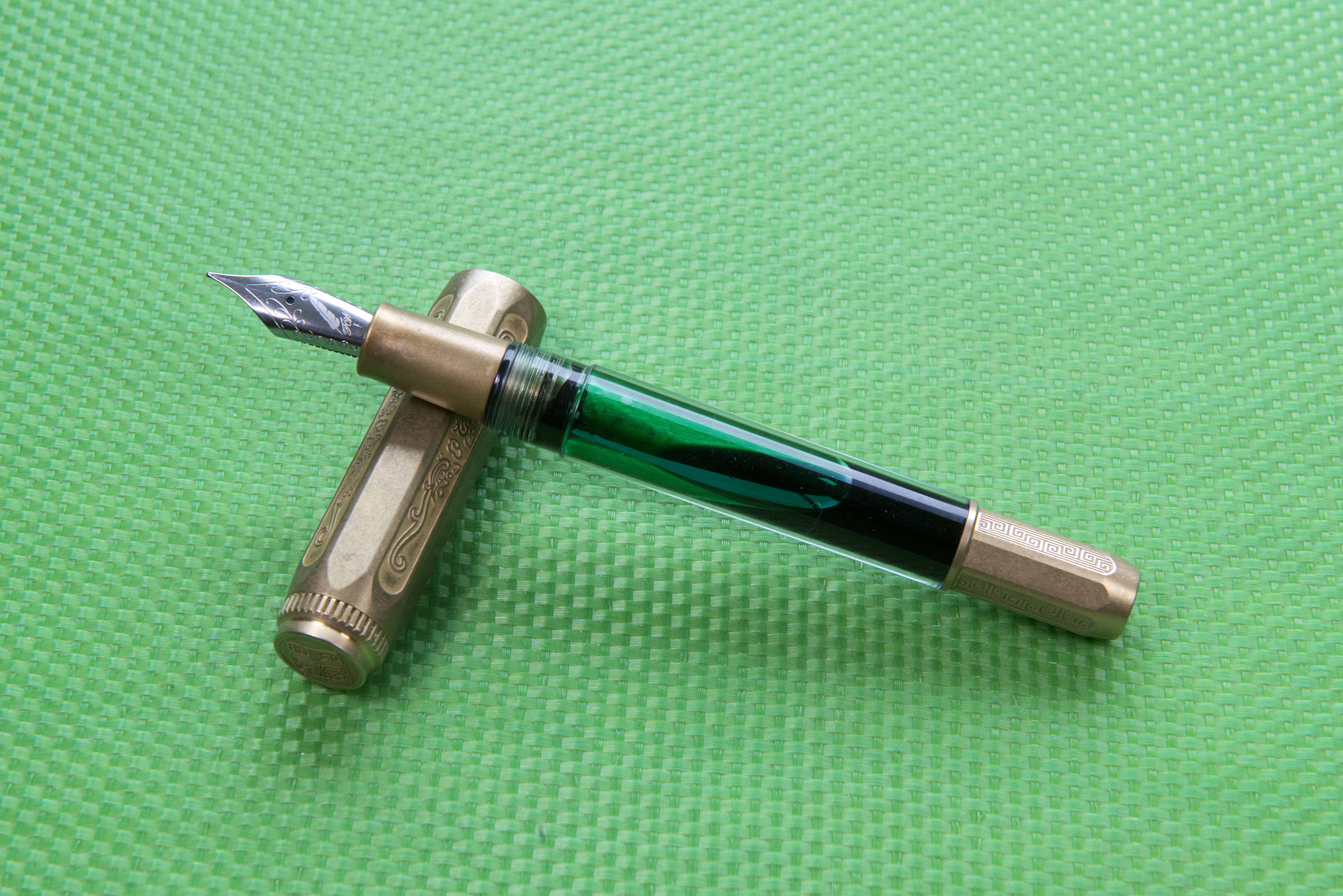 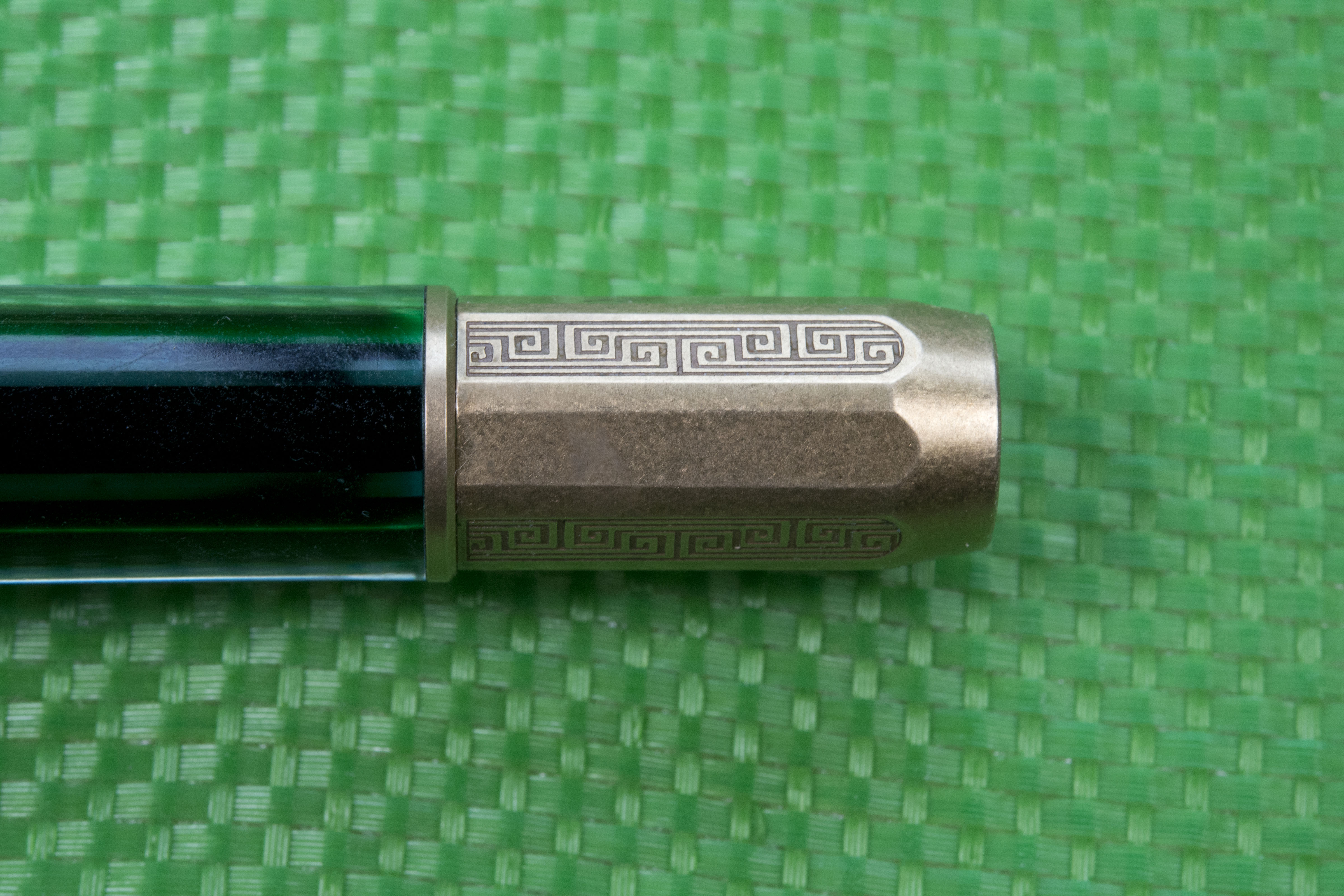 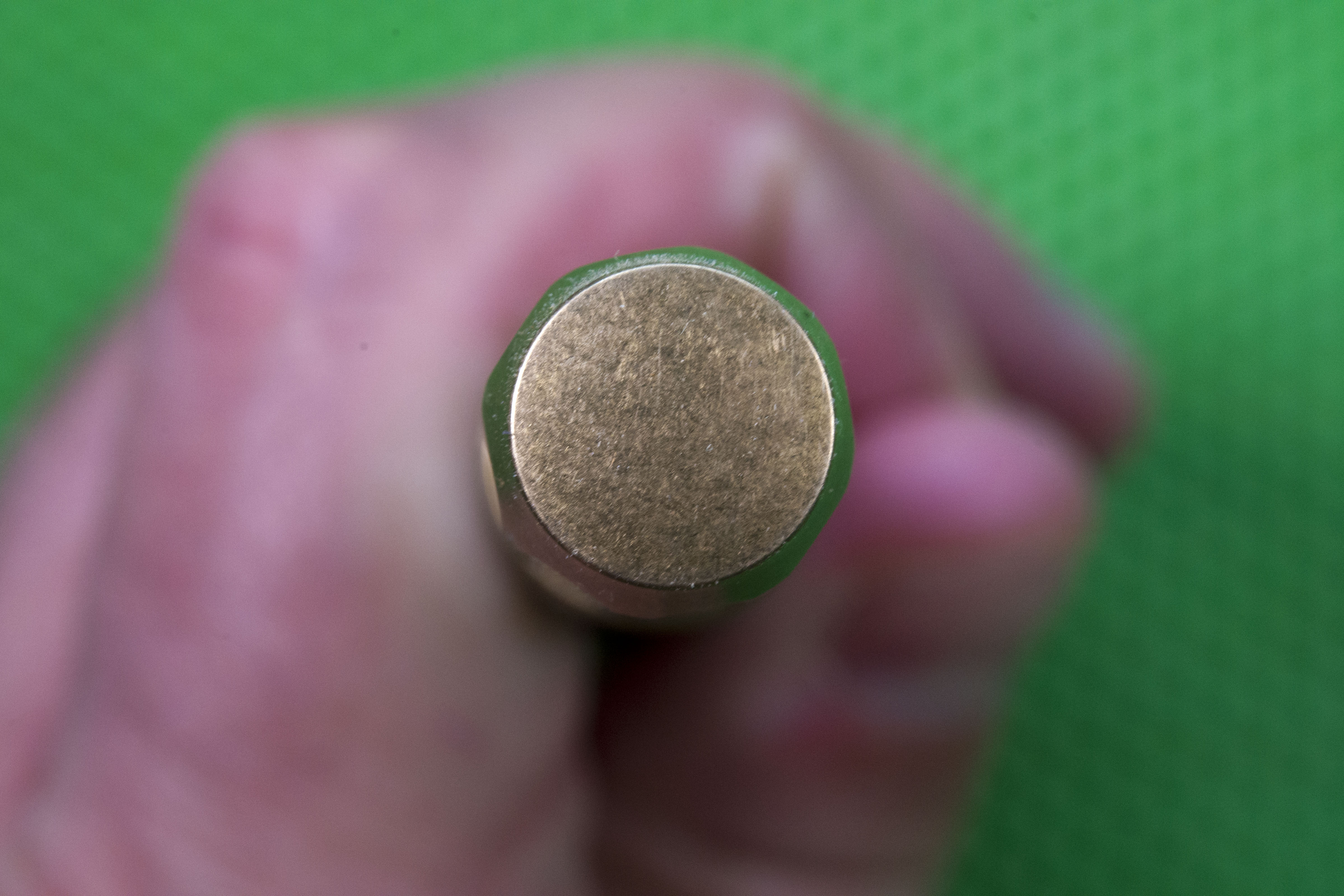 The cap is plastic lined and will post, however the back weight is great, unbalancing the pen, and it is not a snug fit, so invert the pen and the cap will fall off.  As previously mentioned, there is no clip.

Visually the pen does look good.  The pre-tarnished’ brass removes the potential bling element.  The transparent part looks cheap but feels tough and is described as being indestructible.  It does cry out to be turned in to an eye dropper so you can see the ink slosh around in there.

The nib is a standard size #6 JoWo unit with the Fine Writing International feather logo laser engraved on it.  Mine is a fine and it did suffer from some real problems at first.  Ink would flow but then within two to three lines of writing the pen would stop.  Leaving it a few seconds and it would work again.  Also the link/flow was very dry.  I moved from Diamine Ancient Copper, which I felt was an appropriate colour for the pen though some what dry, to Pelikan Edelstein Olivine, which is certainly on the wet side.  Even doing this did not cure the problem and I had to widen the tines.  The flow is now reasonably good, though still on the dry side.  Almost certainly I have just been unlucky and being a JoWo nib I could swap it out for another unit (which I did to test prior to fixing the nib). 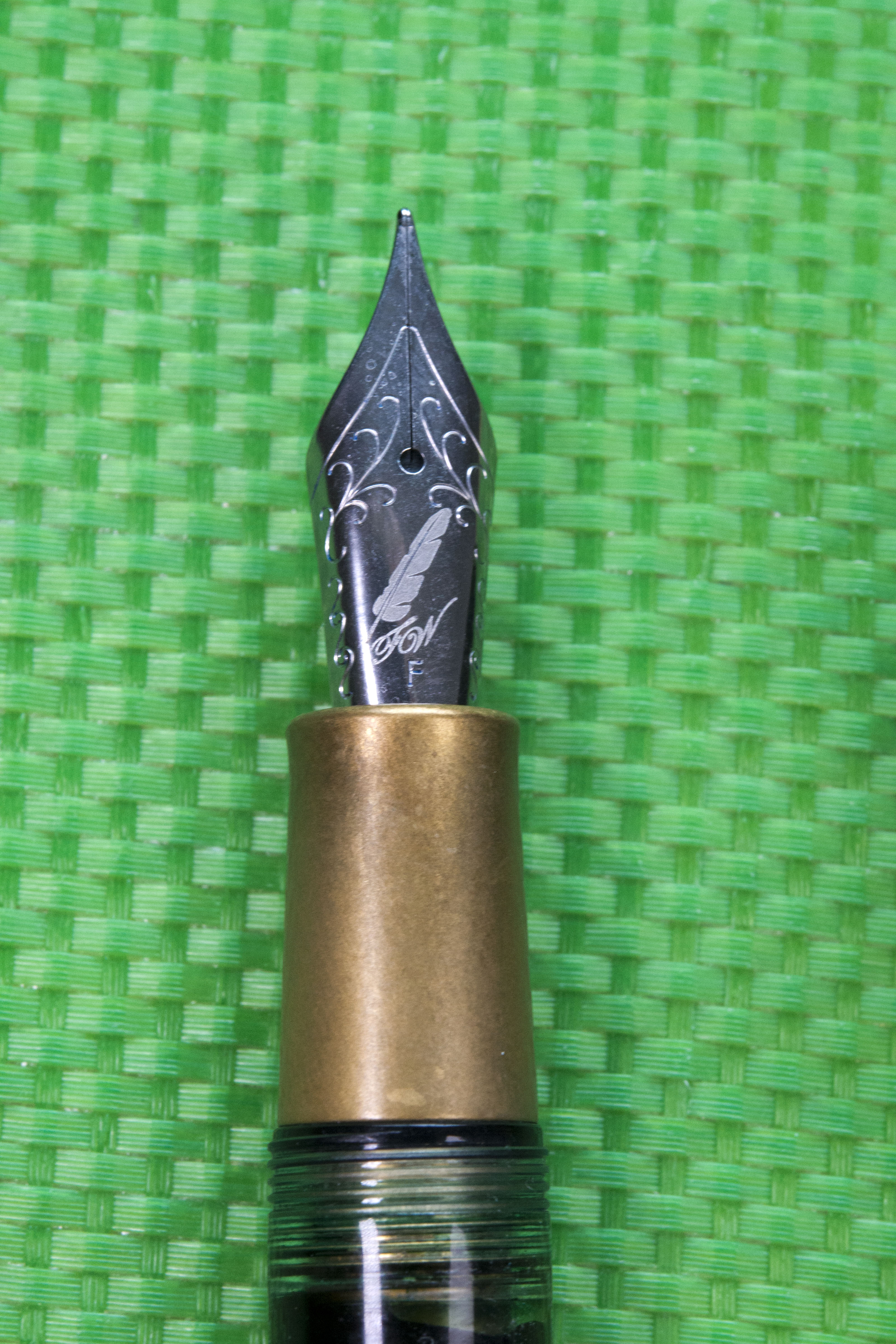 The pen comes in a brass tin with a converter (presently in another pen) and a set of instructions, but unlike the Planets models, no eye dropper. 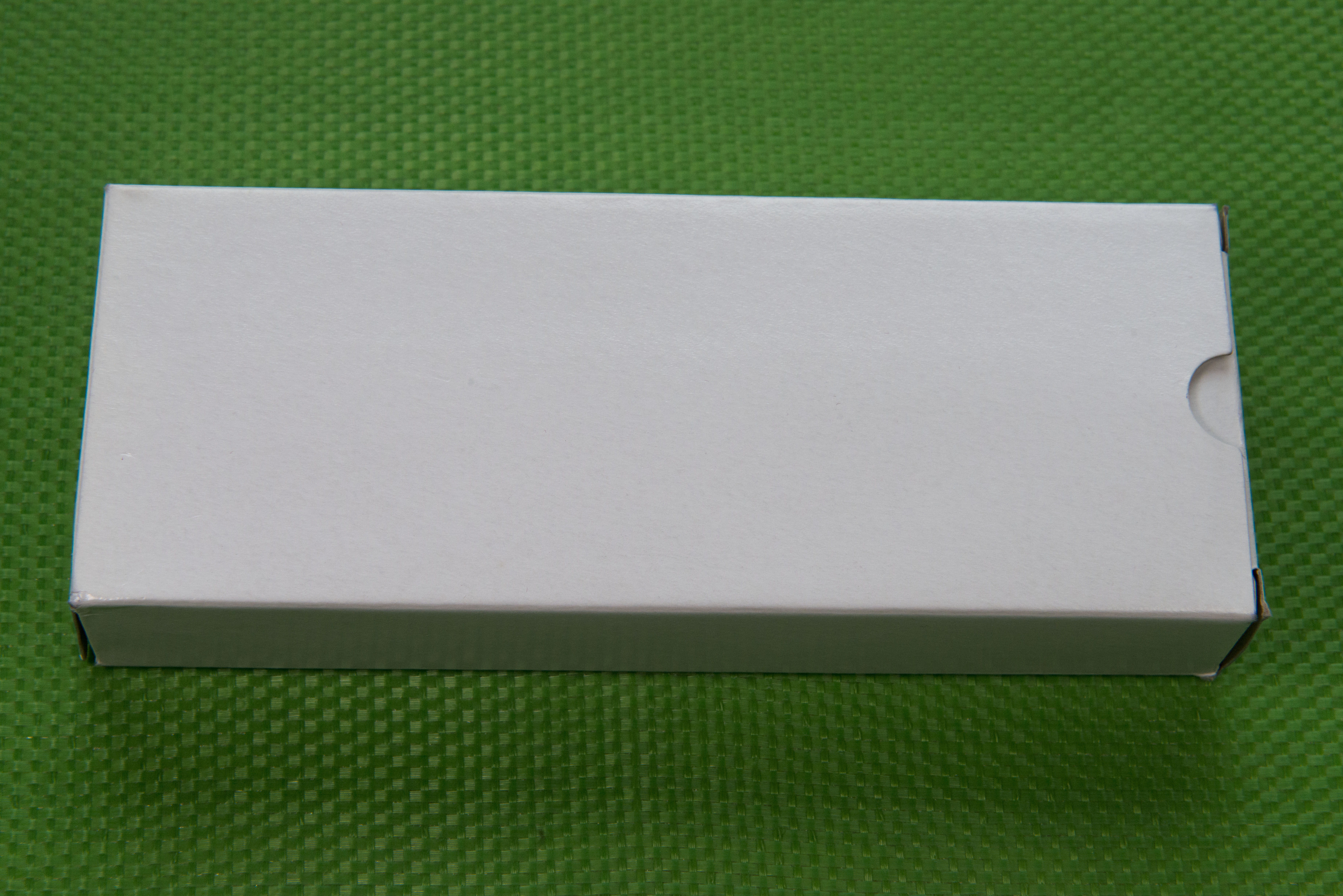 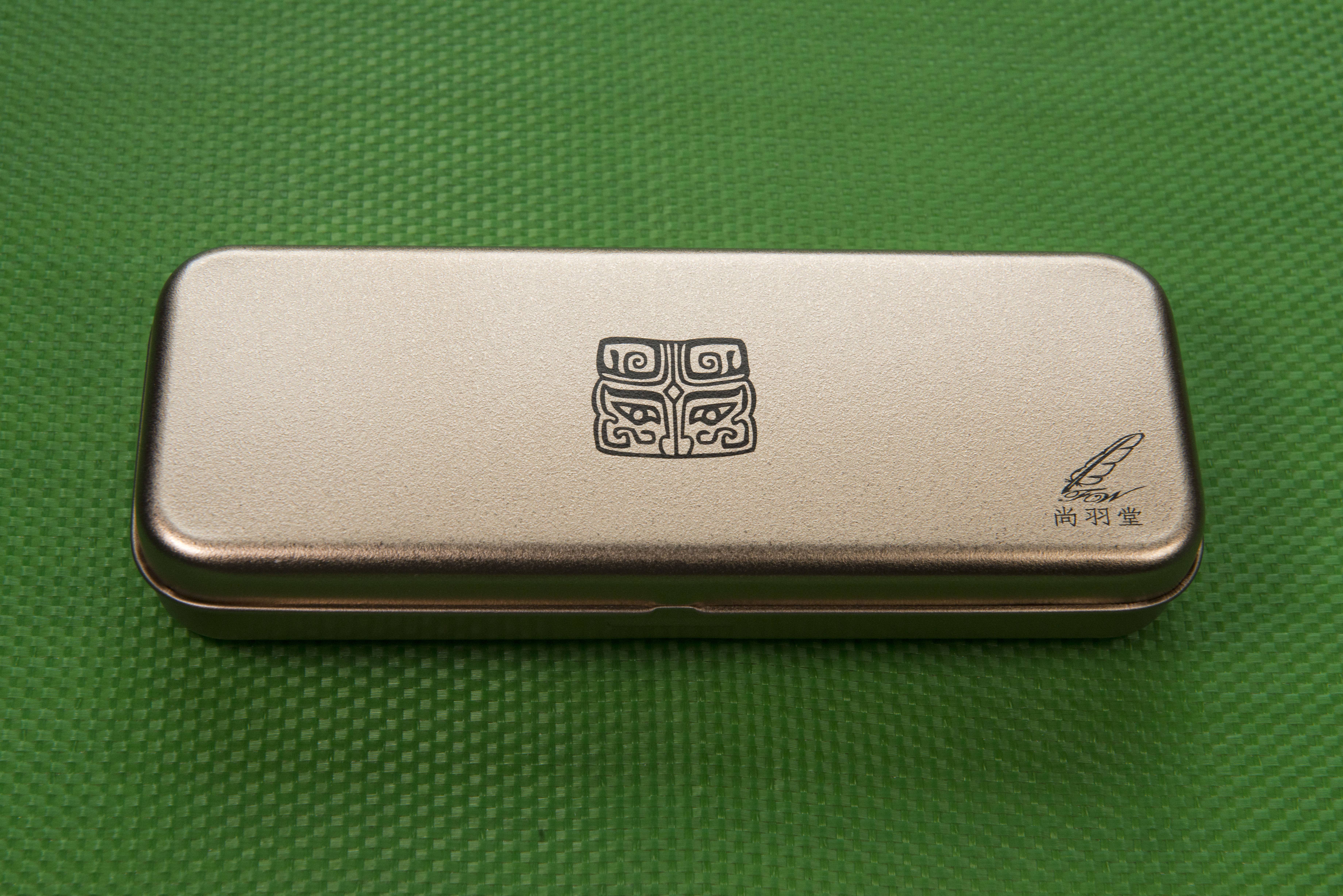 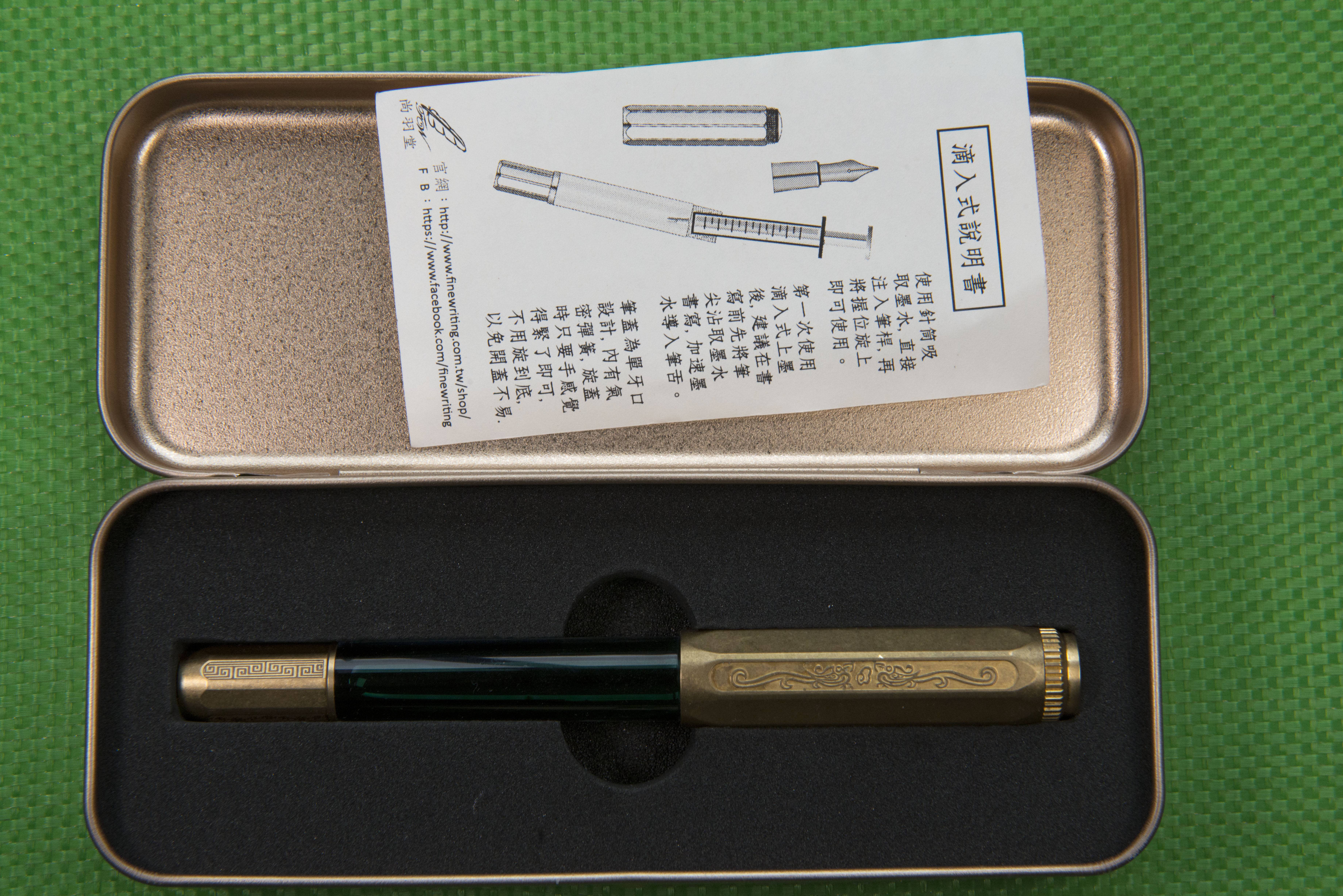 There is one thing I have not yet mentioned.  The smell.  You can smell the brass, which to me is a good thing, however this may put many people off.

I’m in two minds about this purchase.  I picked it up from the ever friendly and helpful John Hall at Write Here while at the London Spring Pen Show in March 2019.  Price wise, considering it is made of brass, it is reasonable value, presently going for £88.50.  While this is £33.50 more than the Planets pens, I think this is justified with the difference in materials, plus presentation.  It do think it looks quite good, being different from the norm, plus my tastes in art do cover the Orient.  The writing experience is not too bad (now), but not enough to make me want to use it.  I suspect once I finish the present fill I’ll probably clean out the pen and put it in a drawer or up for sale.  Would I recommend it to others, again I’m not sure.  If you like Oriental things then it is an interesting piece, but will it be enough to keep your attention.  The pictures were actually purposely taken on a mah jong table, but then I would not use it to score as I have sticks and chips to exchange between players.  In the end I think it is one of those pens you buy because it just seems right at the time. 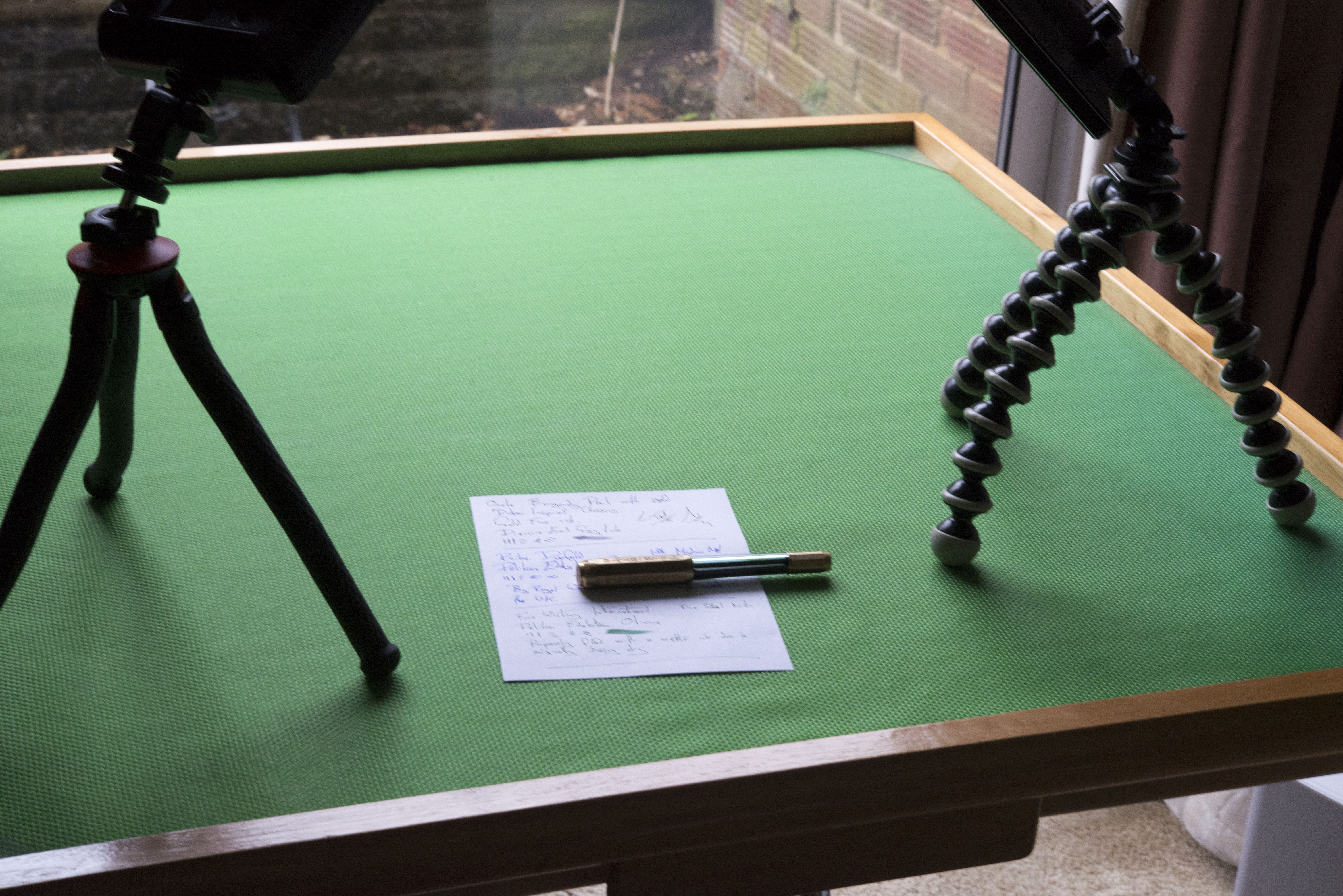 The size comparisons show that it is a medium sized pen that most people would find comfortable in the hand even if too heavy. 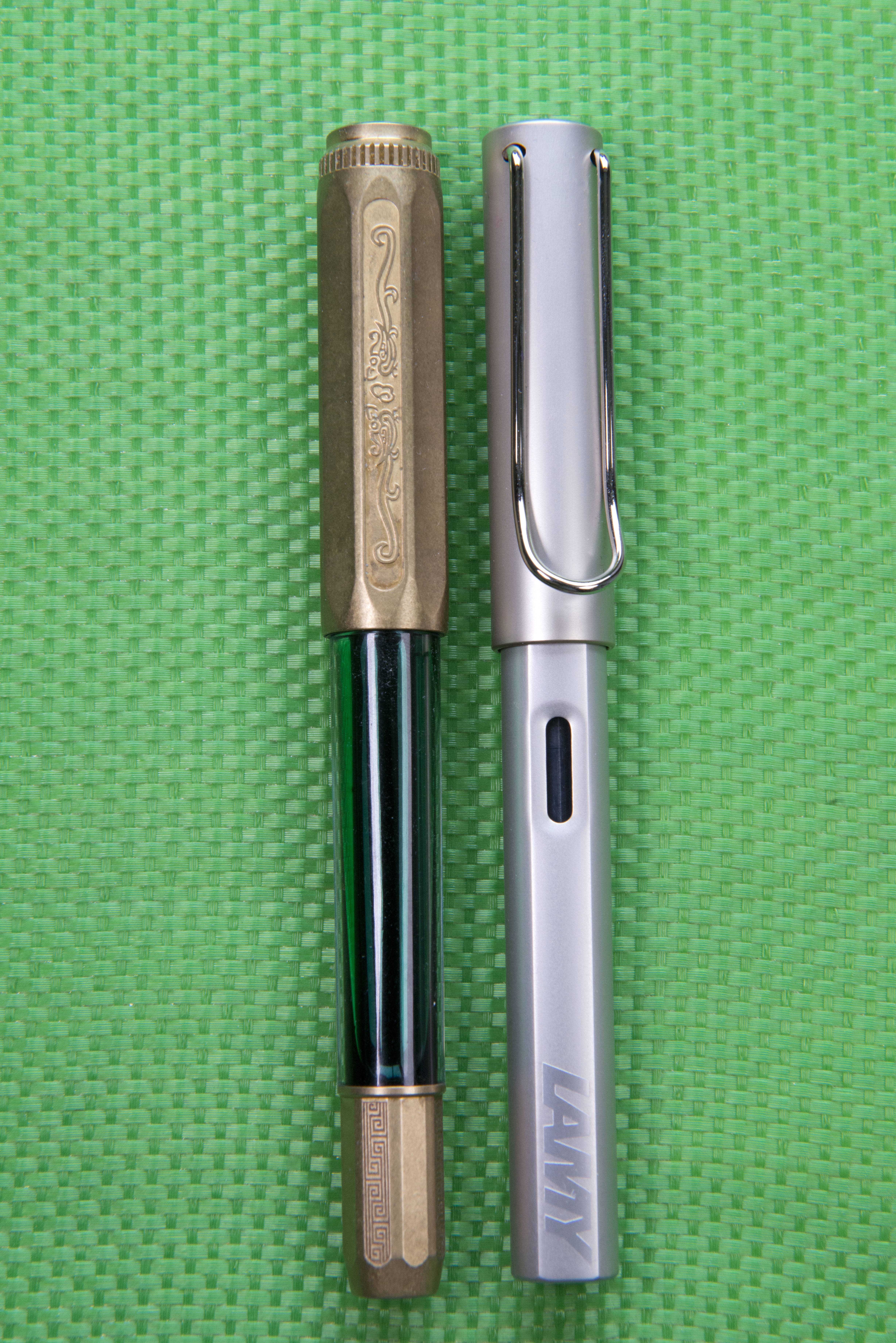 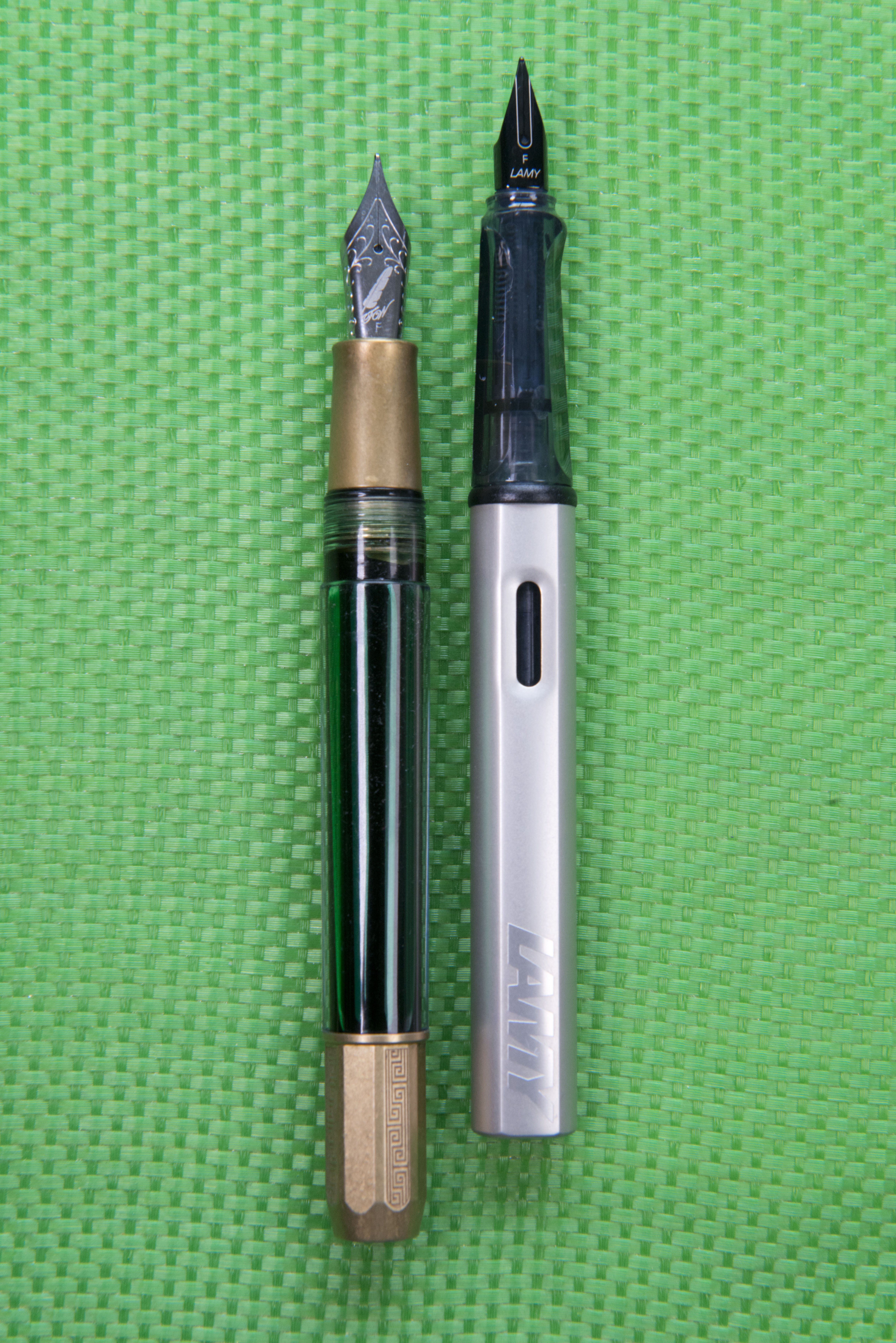 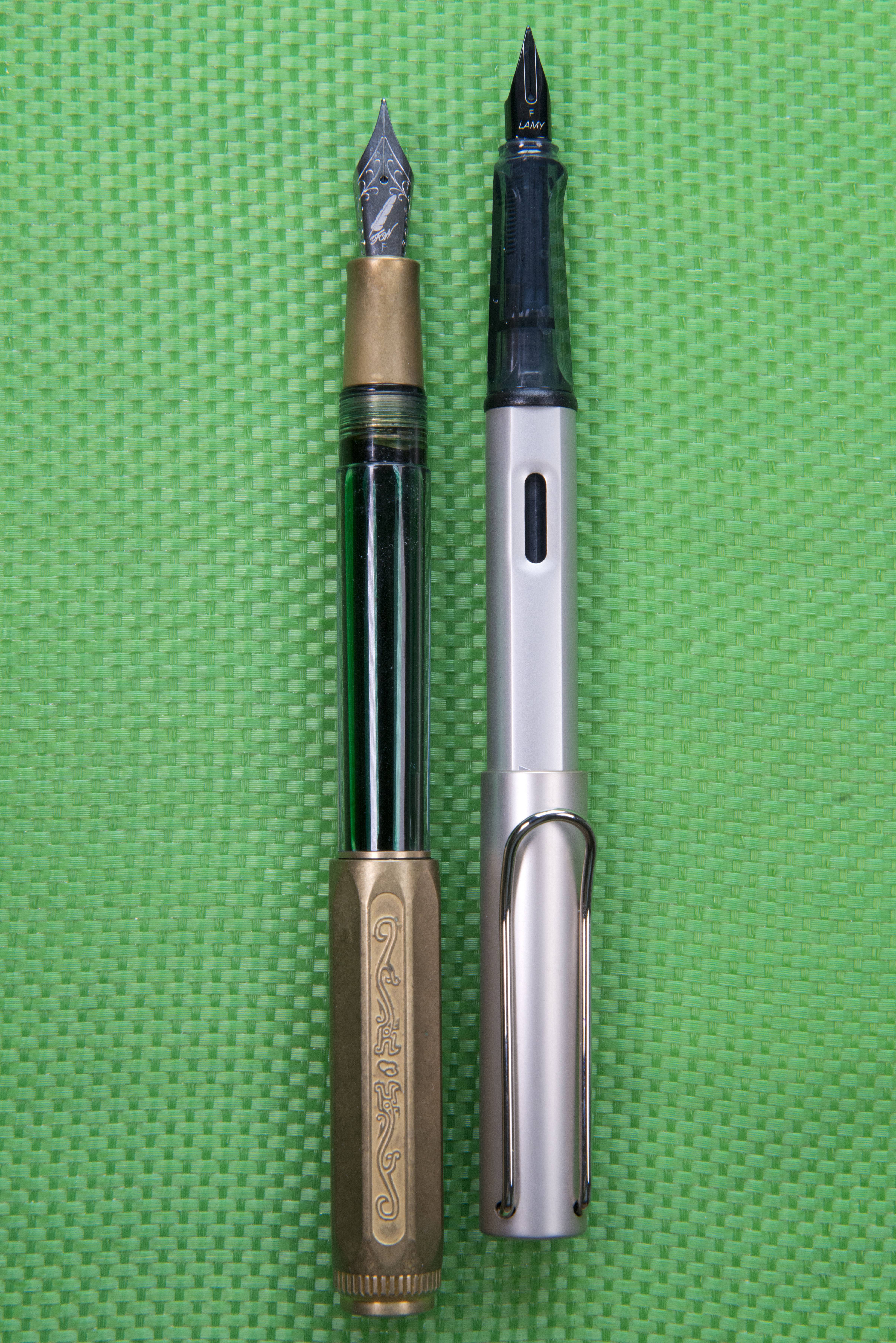 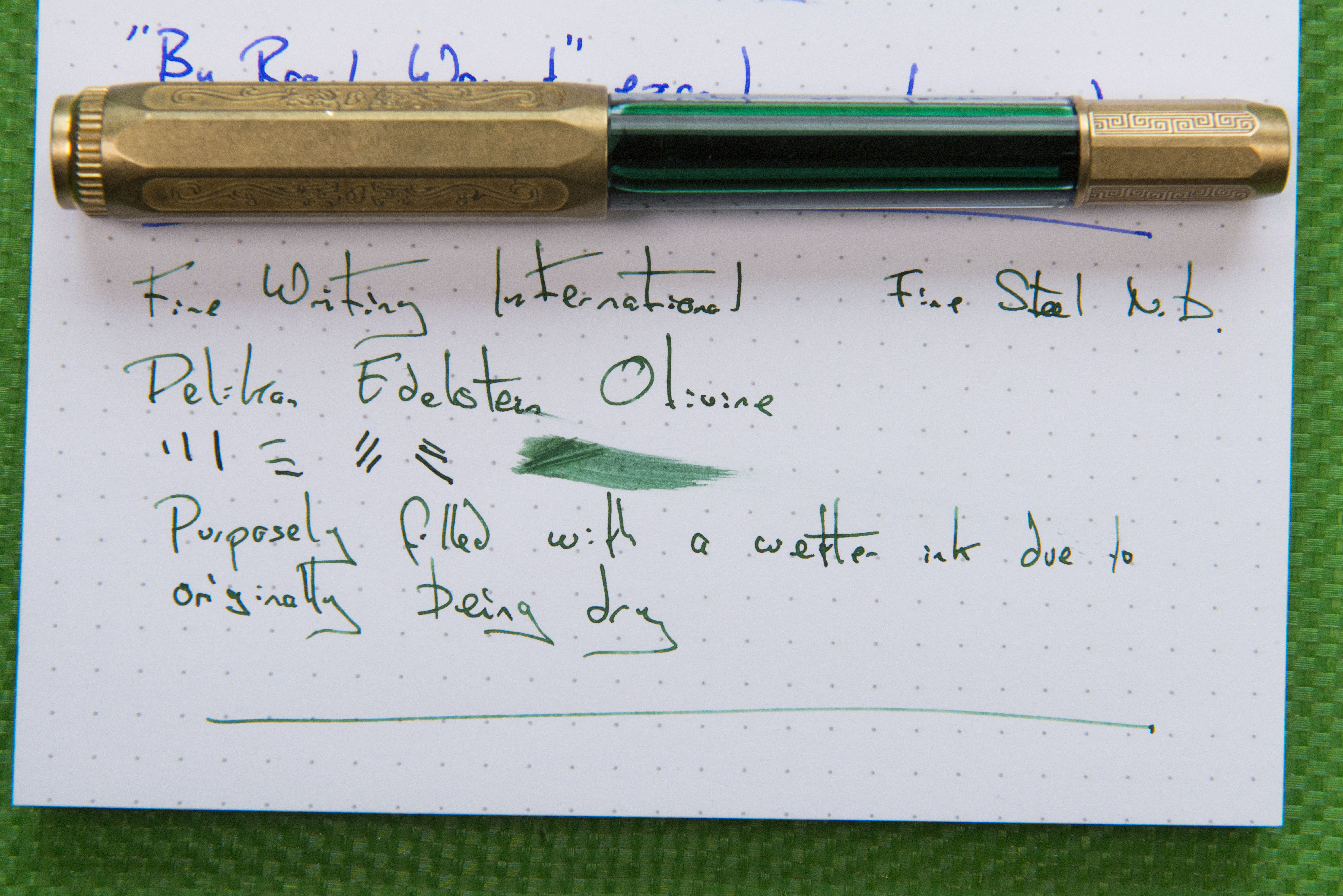 Thanks to Penultimate Dave who did further work on the nib to widen the tines as the shims I have would not part them enough.

With thanks to Leo at the Inquisitive Quill, I’ve now found this is actually the fourth version of six as can be seen in the following photos, which shows the series order left to right. 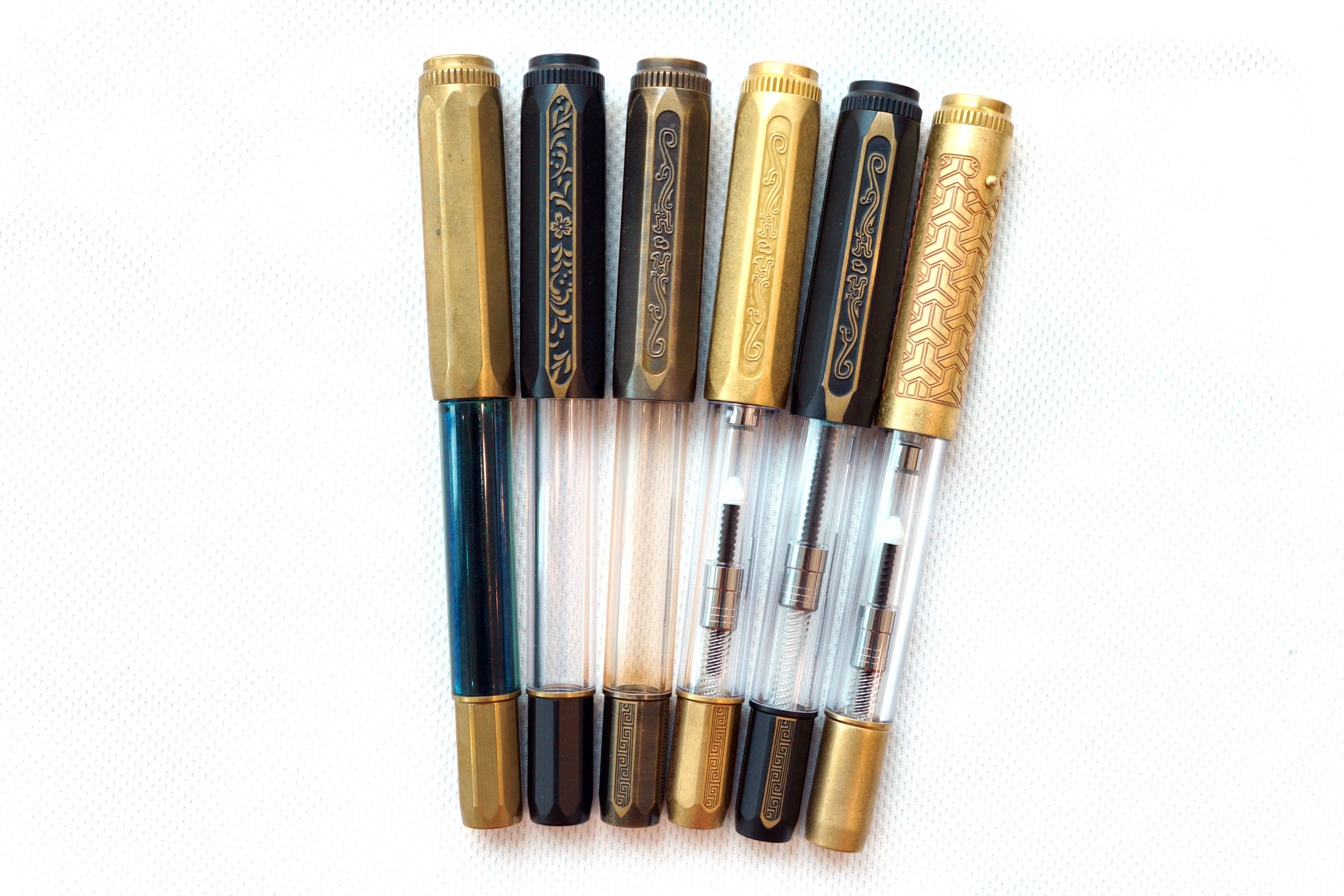