Have you ever read about a new pen and thought that it was interesting.  A friend then buys the pen and looking at it in real life you think “that’s nice”.  Trying it you decide it writes well and you start to think ‘if I could find it in this finish ….’.  Finally, wandering round a pen show, you see the version you want at a nice, hard to ignore price?  Well this happened to me with the Taccia Covenant, which I picked one up at the Spring London Pen Show.

Taccia are relatively new company on the scene, producing both fountain pens and inks.  Run out of the USA, many of the pens are made in cooperation with Sailor and either are cheaper end (sub £100/$130) steel sailor nibbed pens, else high end urushi lacquered works of art (which I wish I could afford) with Sailor Pro-Gear/1911 18k gold nibs (I note now that Taccia are now selling the Pinnacle and Spectrum models with gold nib options at just under £200).  A number of their models, however, apparently come with JoWo nibs.  My reason for saying apparently is most Taccia pens come with Taccia branded nibs, however either they under order, or mismanage as some pens do not.  This includes the high end pens as I know some one who originally received an Autumn’s Breath with a Sailor branded nib.  It took several weeks for it to be replaced with a Taccia one.  I mention all this as right from the start you will be able to tell this pen does not have a branded nib, but rather a generic one, and while the feed is the standard JoWo unit you see on all Covenants, on here the markings on the size #5 nib mean it was supplied by Schmidt.  To be honest, on a sub £100 pen, you need to ask yourself, does this make a difference and the answer is no aside from for aesthetic reasons.

I bought mine as NOS (New Old Stock) from TwiCo at the 2019 Spring London Pen Show.  This meant it came with no box or converter, also the nibs on the Parchment Swirl  version were unbranded.  I think it cost me £60 on the day as a show special (and missing the converter) compared to £70 on their website.  Still a good price for a pen that normally retails at £90 if you can find another Taccia reseller (I only know of one in the UK and Europe). 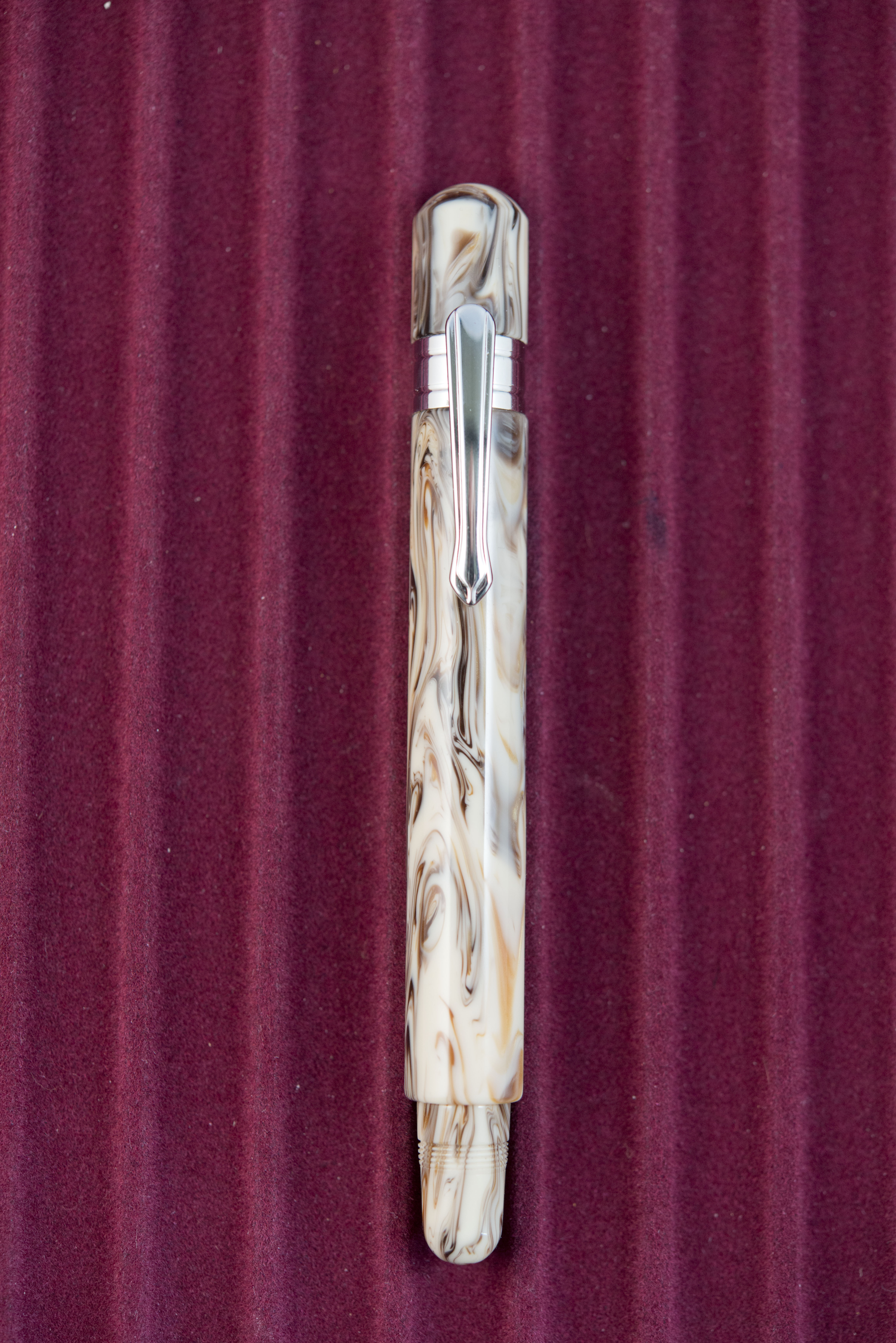 The pen is made from an attractive acrylic described as Parchment Swirl, though the term cappuccino actually comes to mind.  There is a wonderful randomness to the pattern and it is not as flat as you might expect from a pen at this price point, as the lighter ‘caramel’ streaks have a shiny golden chatoyance about them.  The long cap almost makes the end of the barrel look like a wide clicker for a ball point pen or a fatter version of a Pilot Vanishing point.  The metalwork is steel or rhodium plated.  When capped this is just the clip and a fat ring holding it in place.  Start opening the pen and a metal washer ring can be seen.  It again suits the look of the pen and also does seal the cap very well as I’ve noticed no ink loss when the pen has not been used for a long time.  The other places you see bright work are a ring at the bottom of the cap threads, which actually is part of the metal section threads, and a ring just before the nib.  The only markings, aside from some etched lines, is the Taccia name laser engraved on to the back of the clip ring.  One other feature is visible while the pen is capped.  At the bottom of the barrel the threads used for posting are visible. 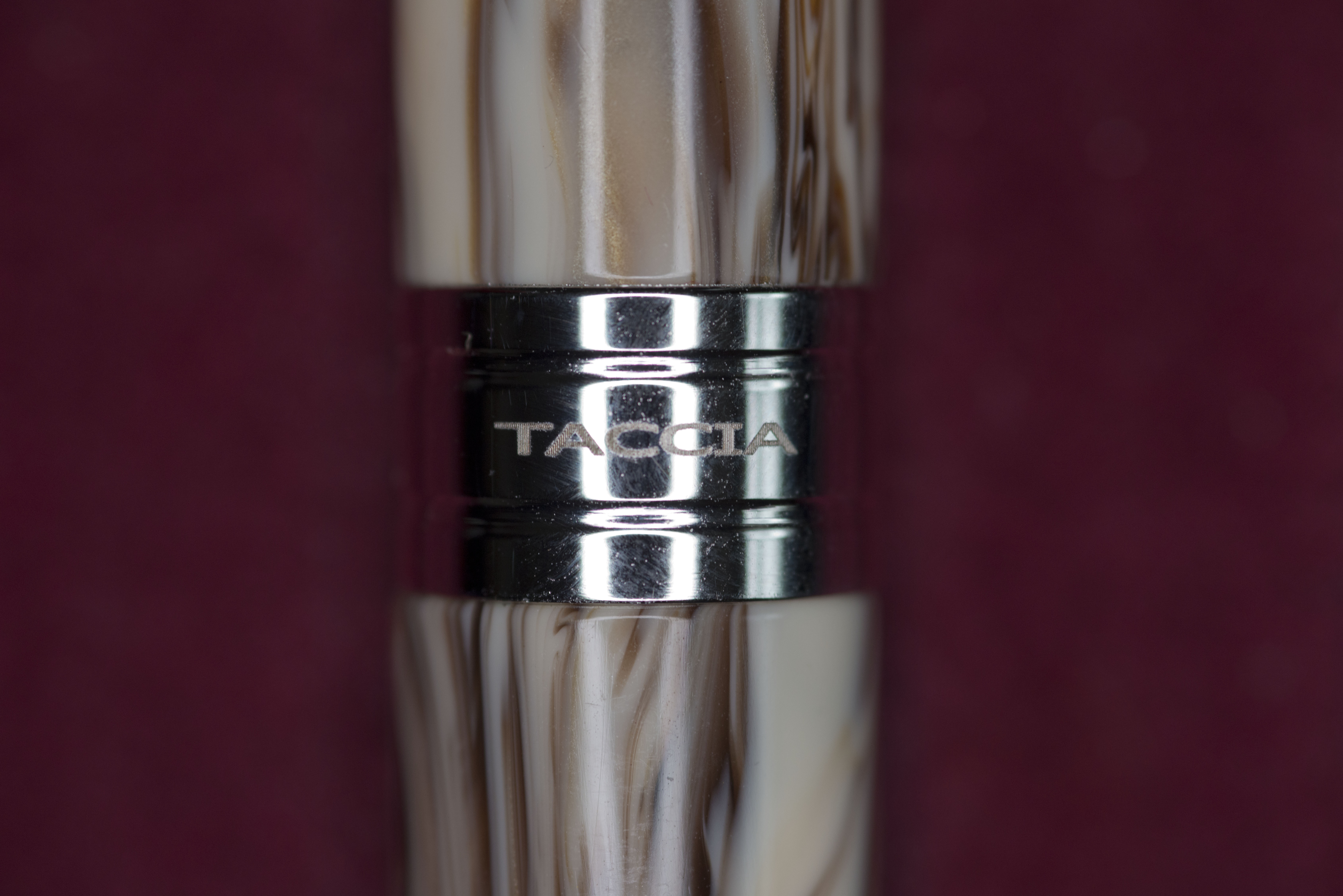 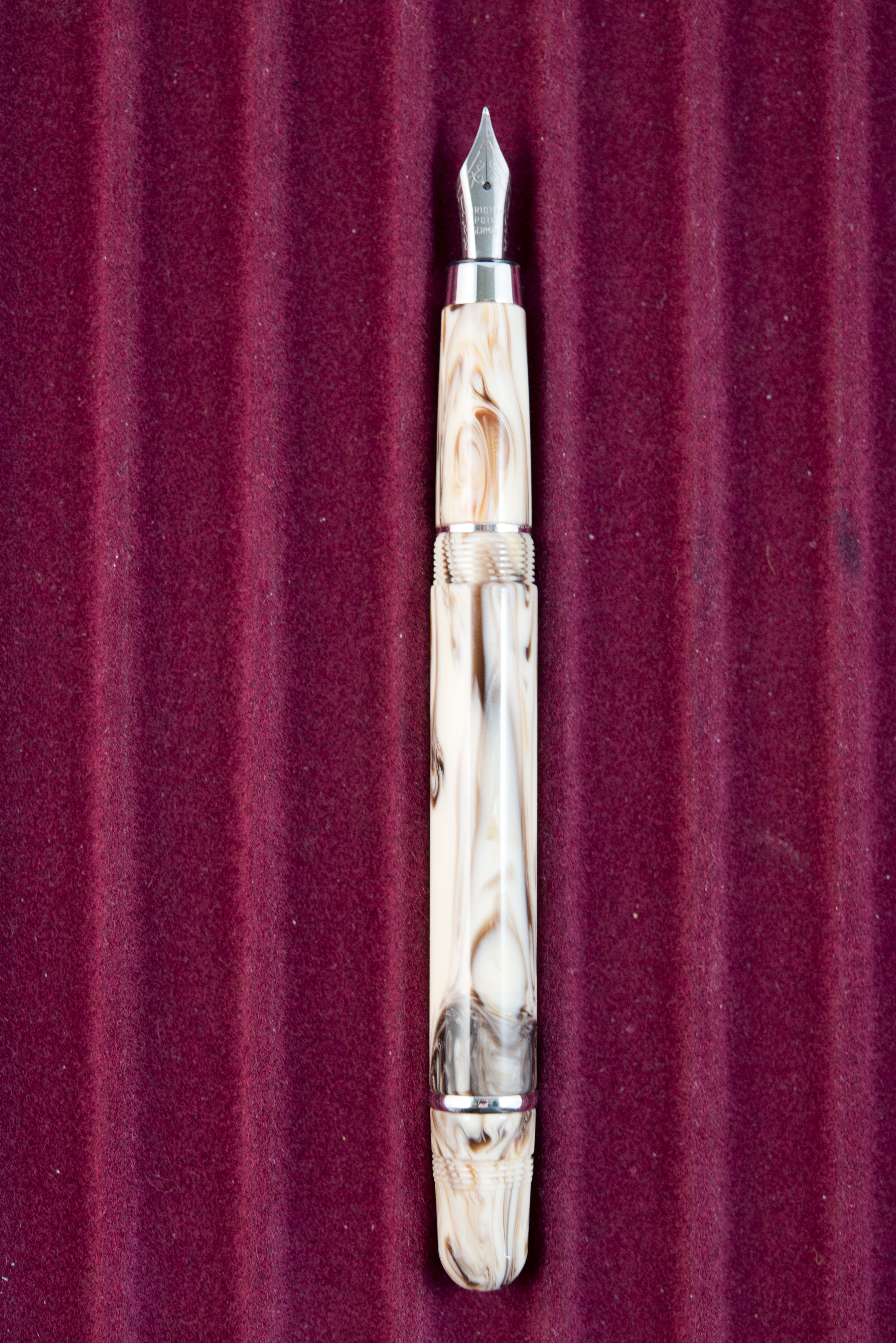 Uncapped and the pen is of a ‘normal’ length, well proportioned, and on the narrower side, though not thin.  Again it is attractive to look at and the two sets of threads do not detract from it’s appearance. Alongside the cap you can see just how long and deep the top is. 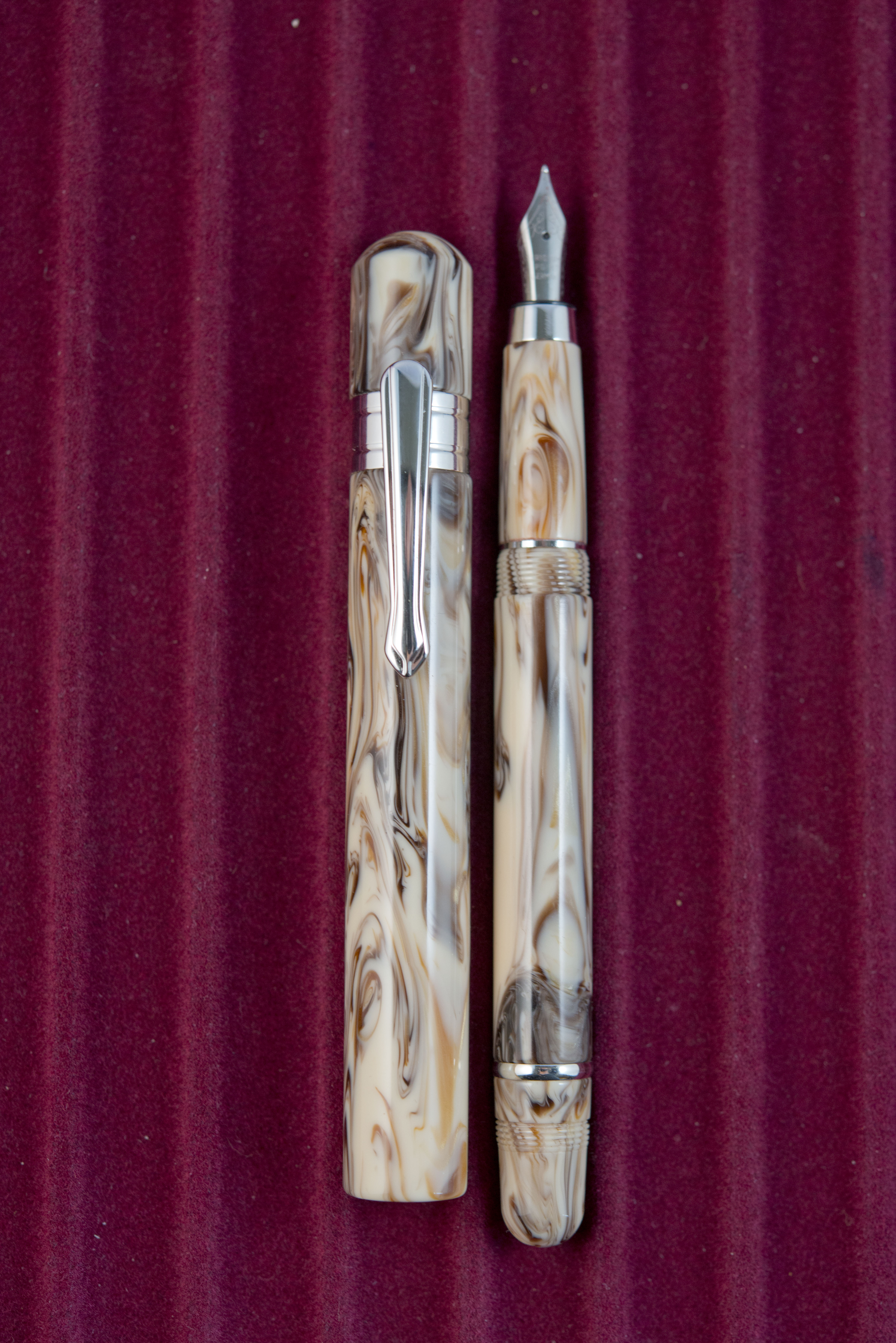 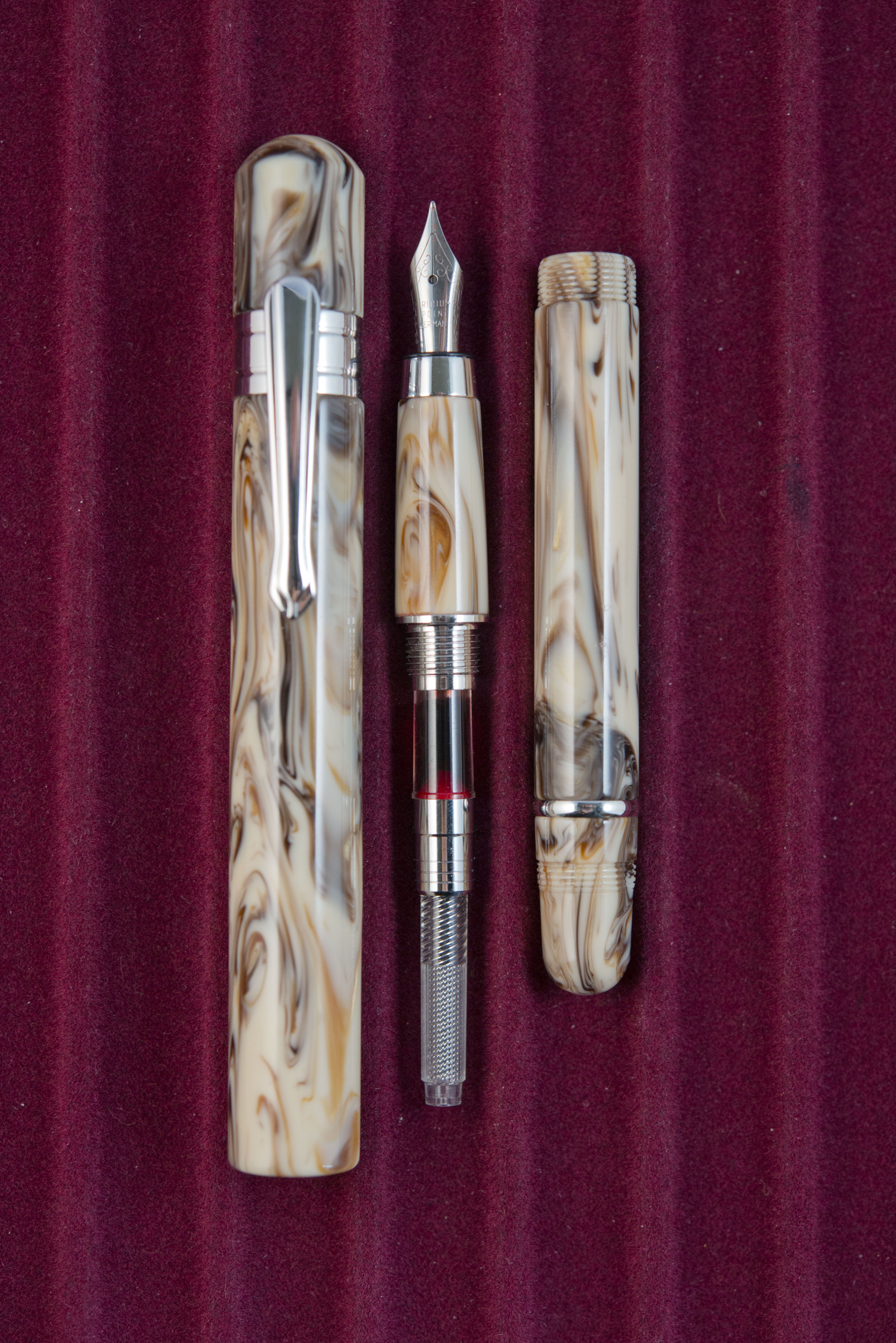 The clip is springy and feels quite soft, however it does snap back rather nicely and works well, holding the pen securely in place in a long pocket.

The trick/USP for this pen is the way it is posted. The cap screws on to the back of the pen, with it’s opening ending up just behind the capping threads. 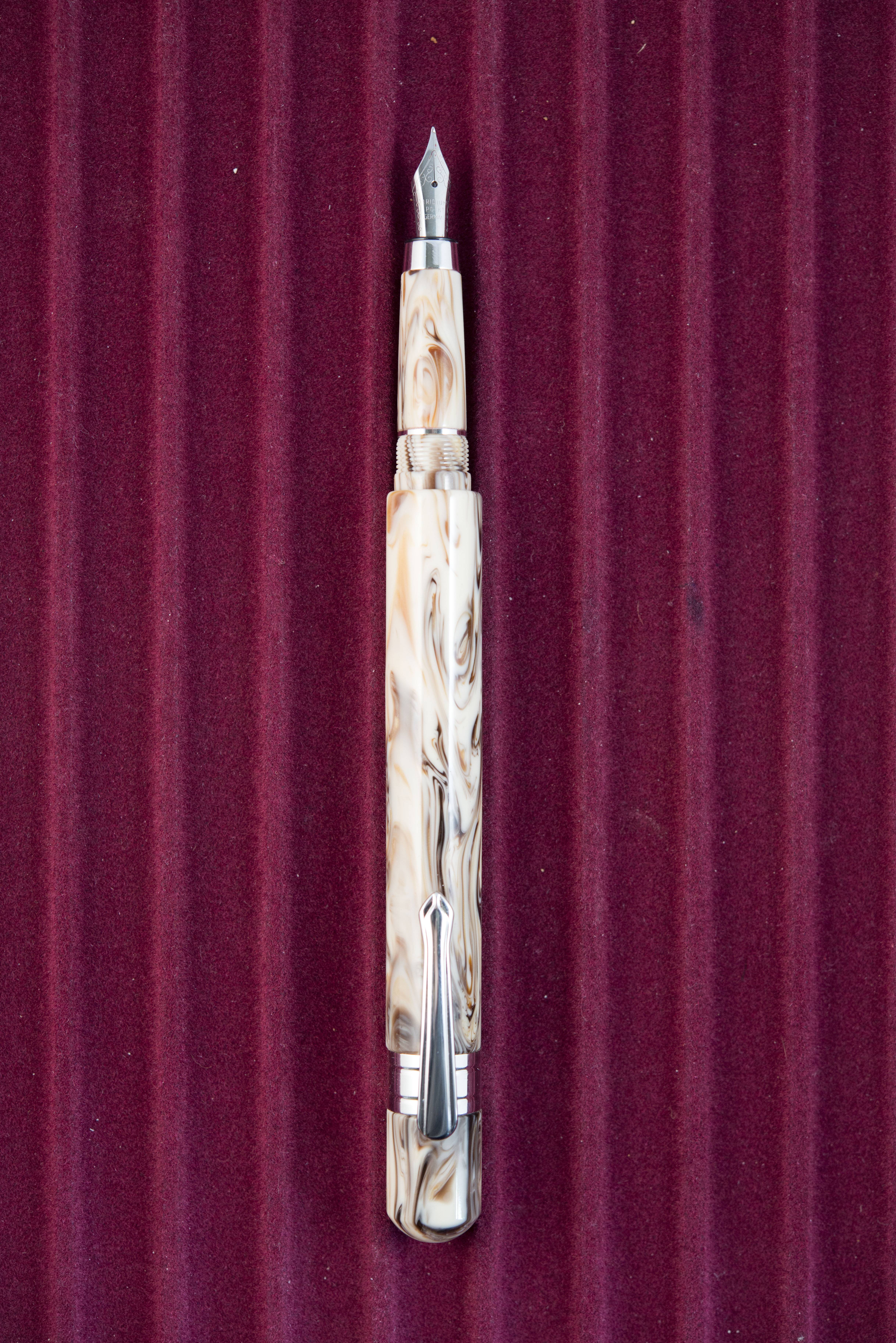 This party piece does lengthen the pen by a couple of centimetres, and does move the balance point back. Also the extra width does not make holding the pen any more comfortable for larger hands as any difference is over the crook of the hand and not between the fingers. Personally I found this changed a comfortable pen to use in to an unwieldy one. There was a further issue for me with the design, and that was when unposting the cap. As you go to unscrew the cap from the barrel I normally found that the grip section was undone instead. The finials are smooth and rounded, with no additional markings on them. 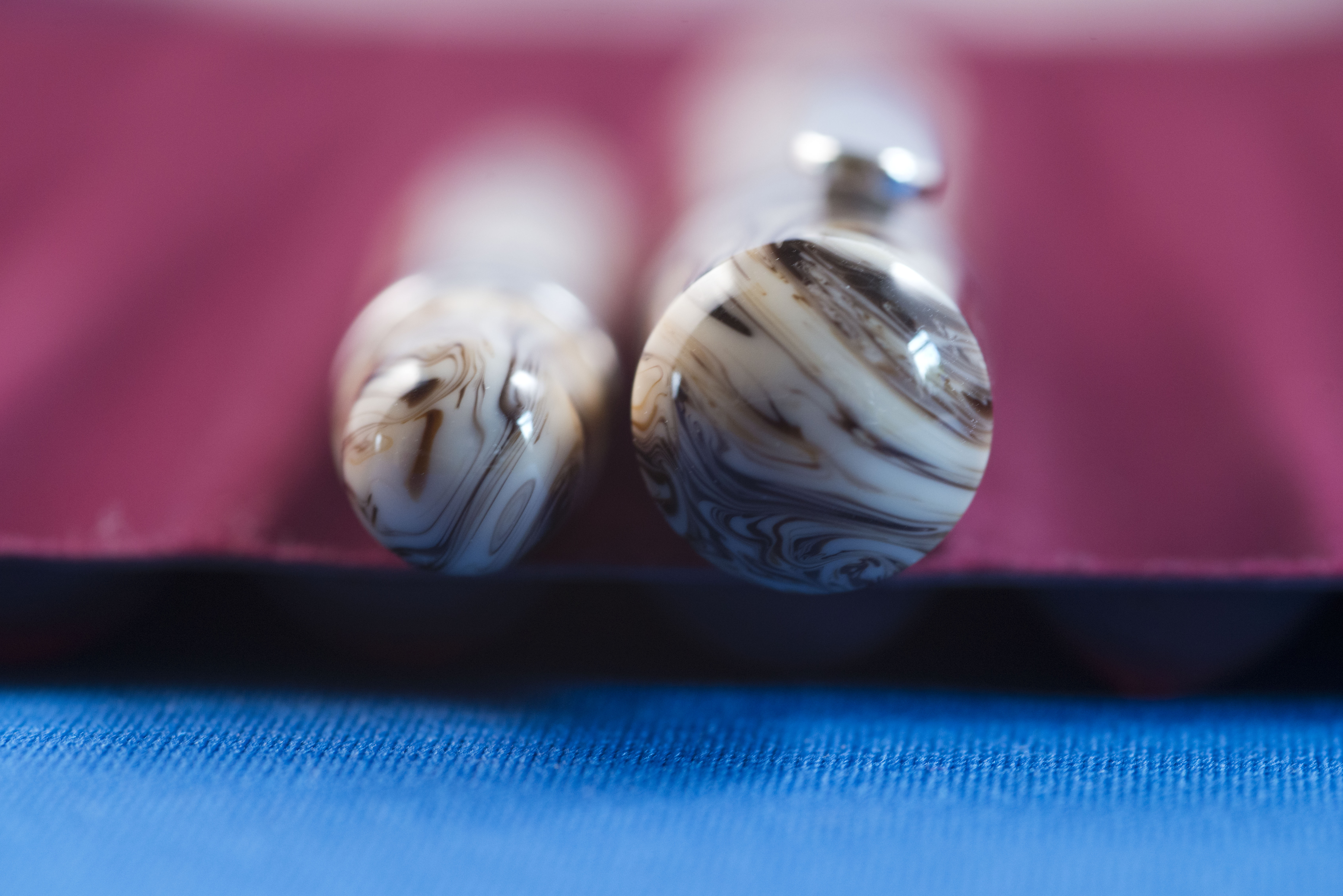 The writing experience is pleasant. The nib may be unbranded and supplied by Schmidt (as they tend to have Iridium Point Germany on their sourced nibs from JoWo and Bock) but is smooth and writes well. 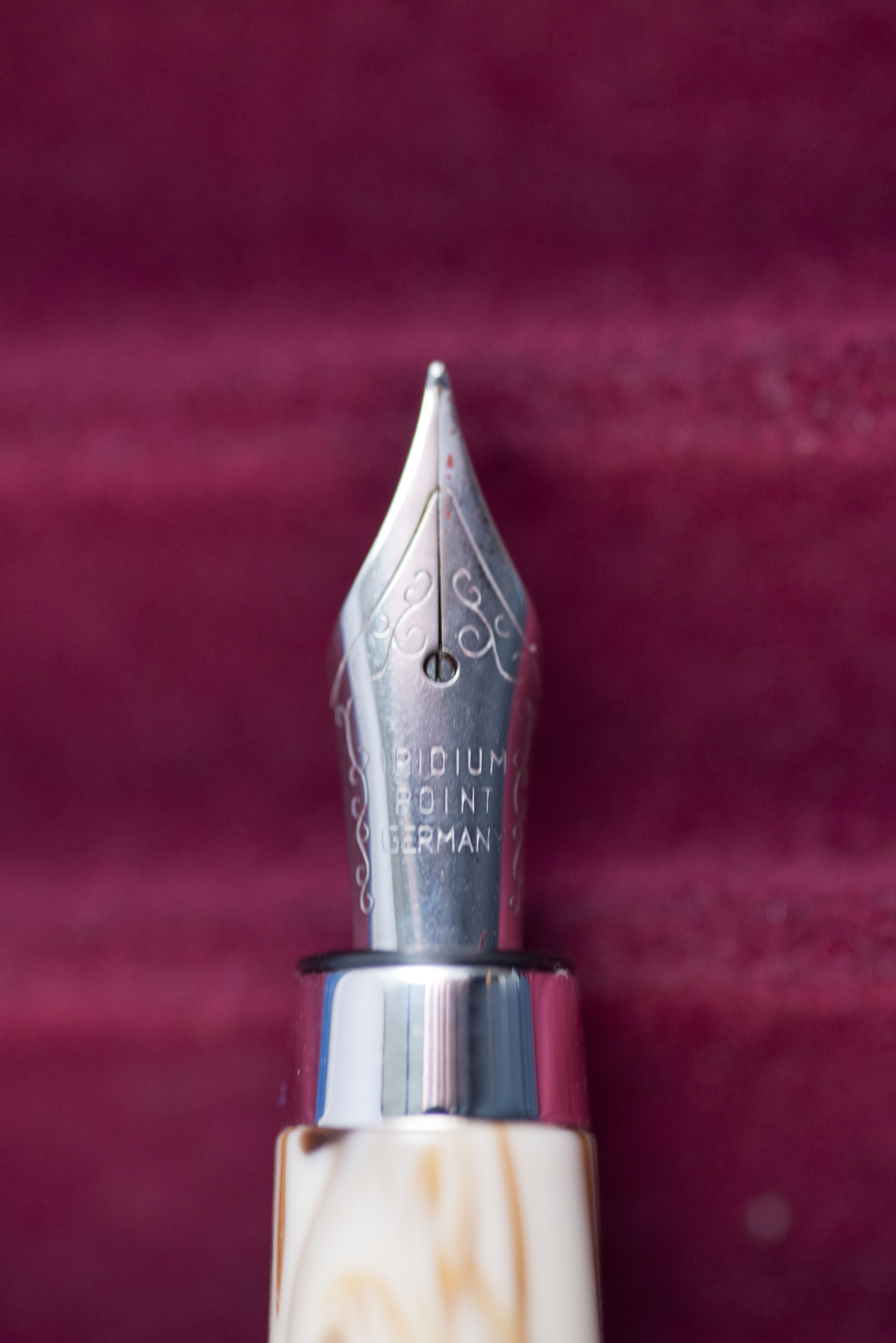 The pen is a little on the thin side for me but I can quite happily use it for reasonable periods of time. 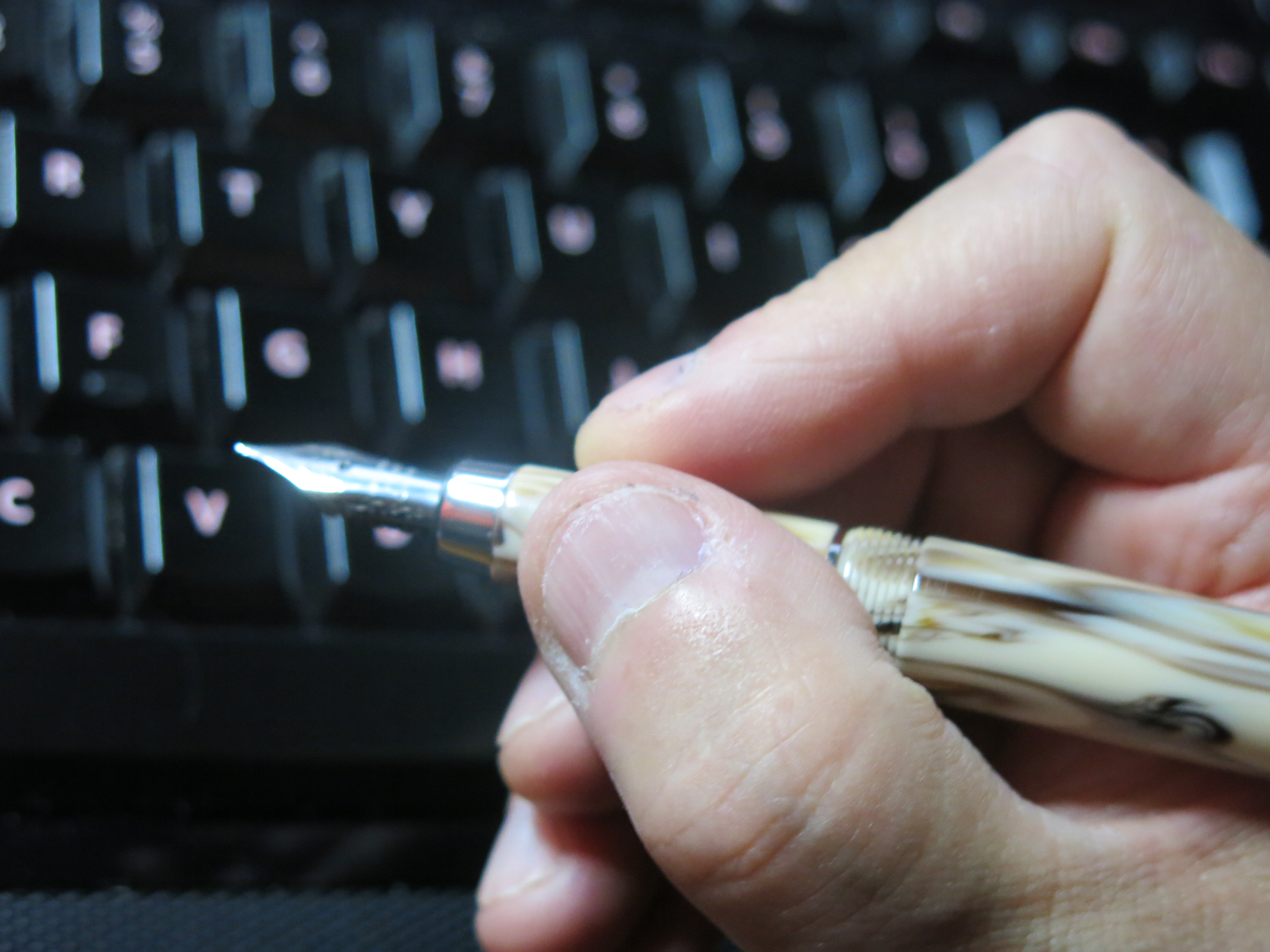 When placed next to a Lamy Safari/Al-Star it can be seen that it is an average size for a modern pen, maybe a little longer. Capped it looks wider than it is. 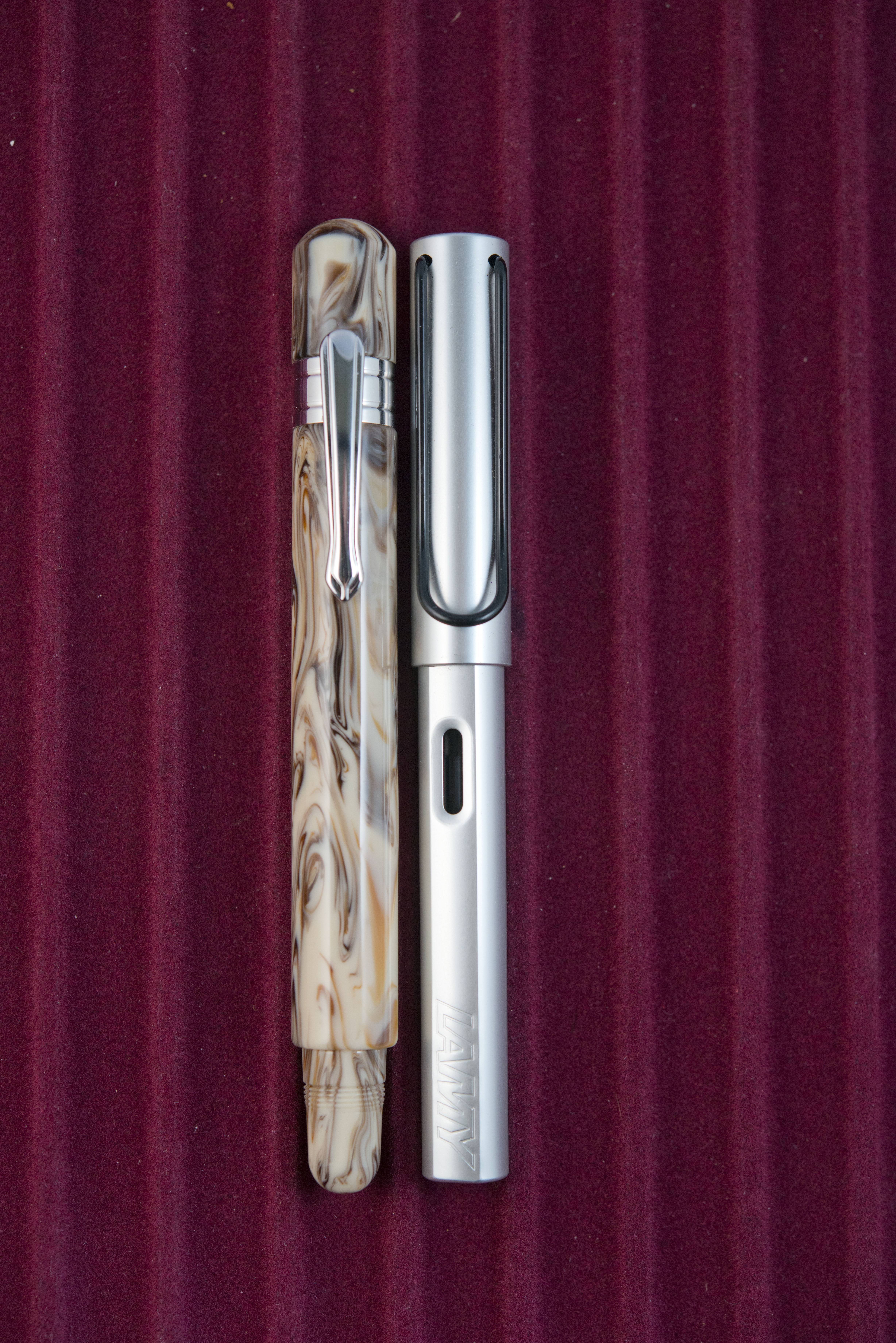 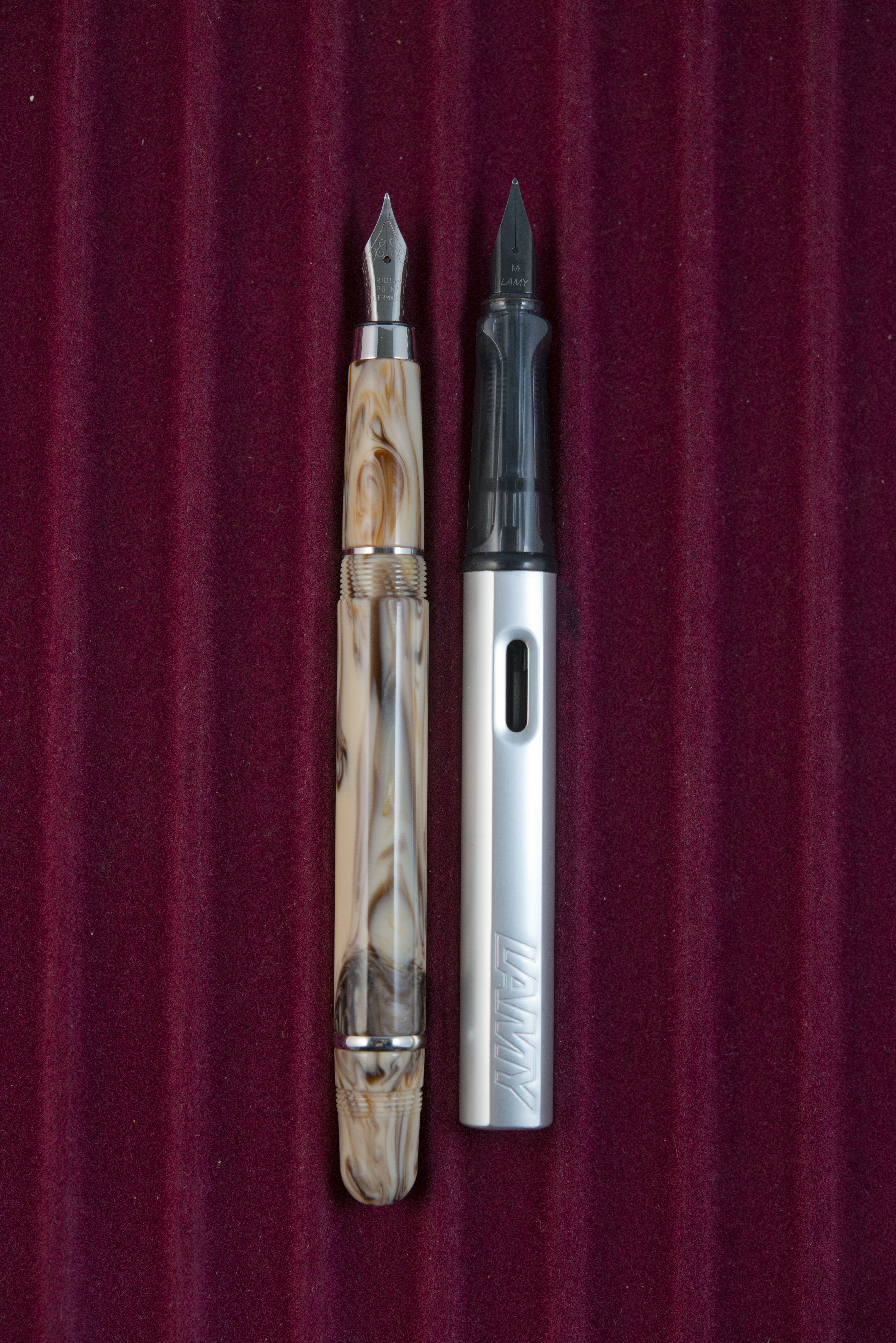 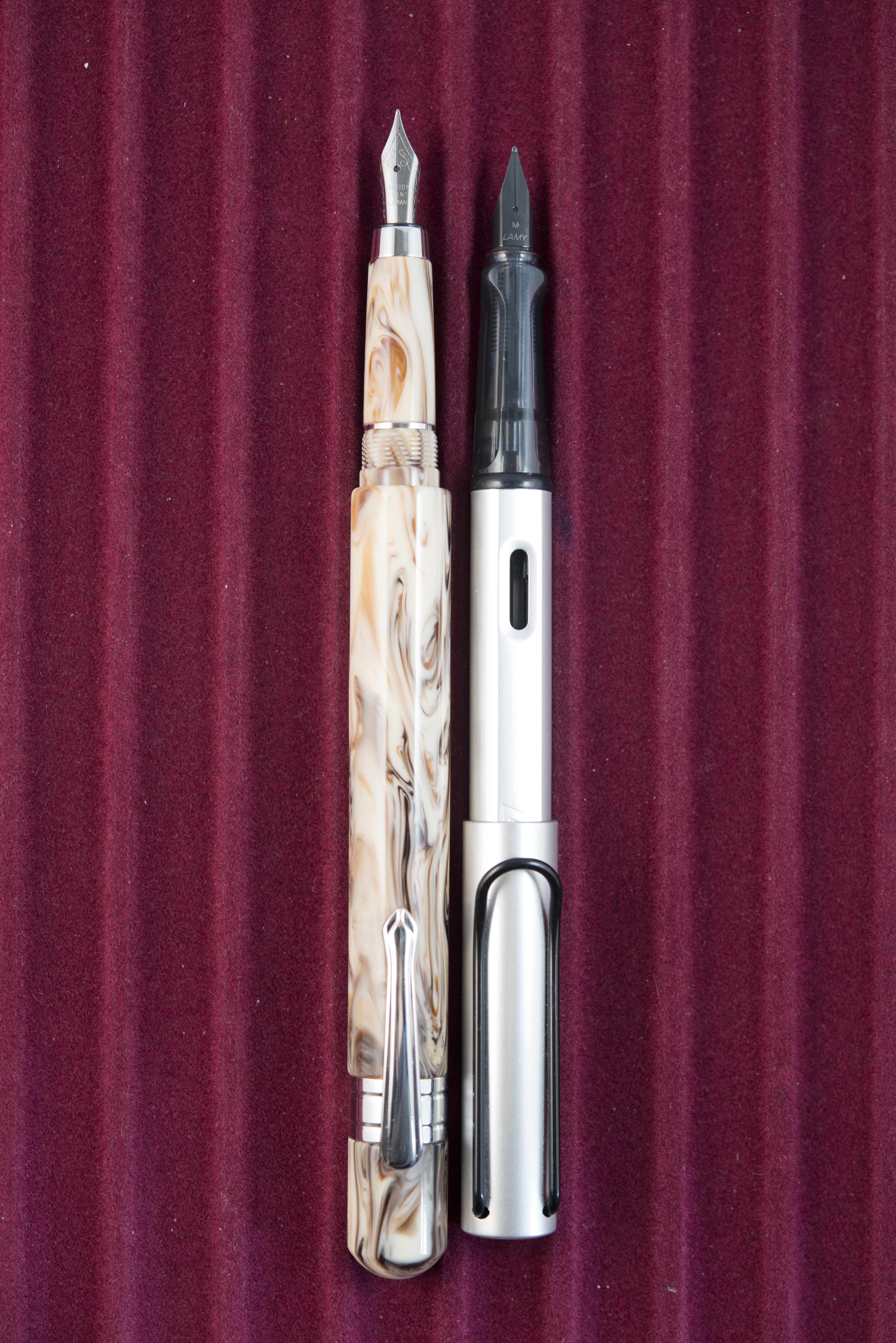 So the question is, what do I think of the pen. The long cap and deep posting is a gimmick and one I feel does not work well. It is not entirely unique, though the other pens I know of, in this style, do not post. Having said that it does look good, and without the cap does feel comfortable and writes well. Is this a keeper for me? No, but only because of the width. It’s just a bit too thin for my personal liking, but many others will not find the same issue, and while it does take two and a half turns to remove the cap, this along with the metal washer does mean the nib is nicely sealed away and this pen could be left for a long time without a loss of ink due to evaporation. This colour/pattern also helps. I know there was a darker swirl, which may also be nice (I’ve not seen it), but I also know this pen is available in plain black and I think that would actually reduce the pleasure from owning the pen, since looking at it while on a desk or swirling it in your hands is part of the joy. 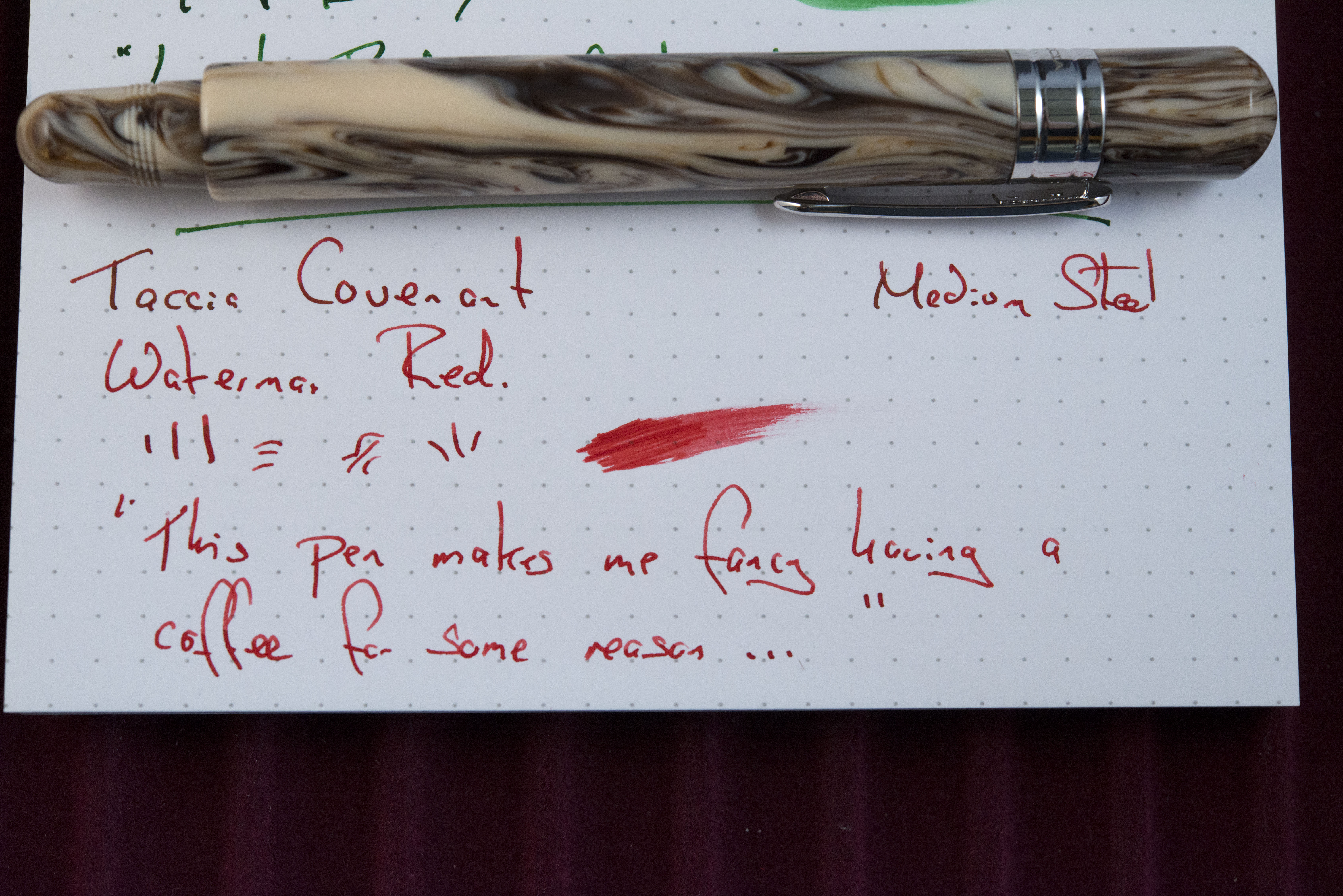 This is a brave and unusual design by a modern company who are looking for individuality with some of their designs in a crowded market place, even with a reliance on other existing and potentially rival manufacturers such as Sailor.