In 1964 Platinum launched the 200, a ‘long-short’ pocket pen.  This was followed four years later by Pilot with the Elite 95 S, and while production of both was stopped before the Millennia, probably in the 1980s, it was the Pilot that was remembered with the result that in 2014 an updated version was re-introduced in to the USA as the E95S and shortly after in Japan under it’s original name.  Available in either black or burgundy and light gold, it looks very similar to the original.  Note the pen was not available outside the country and also should not be confused with the South Korean produced/licensed Pilot Elite, as covered in this video by Figboot on Pens alongside the E95s.

OK I admit it, I had not planned to review a pen I’ve owned for three to four years and had stopped using quite a while back.  However, talking to an Indian colleague of mine he mentioned he had been a fountain pen user in the past and had a Pilot which was short until you posted the cap – we quickly confirmed it was an original Pilot Elite 95S – I think it had previously belonged to his father.  It should be of no surprise to someone with our hobby that come that evening mine was out of the drawer and refilled with ink.

As this pen is not available in the UK or Europe, the version I bought was the Elite 95S from Japan.  I can not remember if I bought it through Amazon or Rakuten, but one difference from the US version, aside from the name, was it came without a converter, just an ink cartridge.  I purchased the Pilot CON-20 converter that the US model came with separately.  I purposely chose the burgundy/light gold version over the black model as to me it looked more 1960s (despite the first version of the original being black) with the only downside being the metal cap being cold in the hands – note I do not know if the black version has a painted/PVD cap or if it is black resin like the body.  One other thing I noticed is that the light gold material of the cap makes it very hard to capture detail when taking pictures, this is partly due to the reflective nature of the finish. 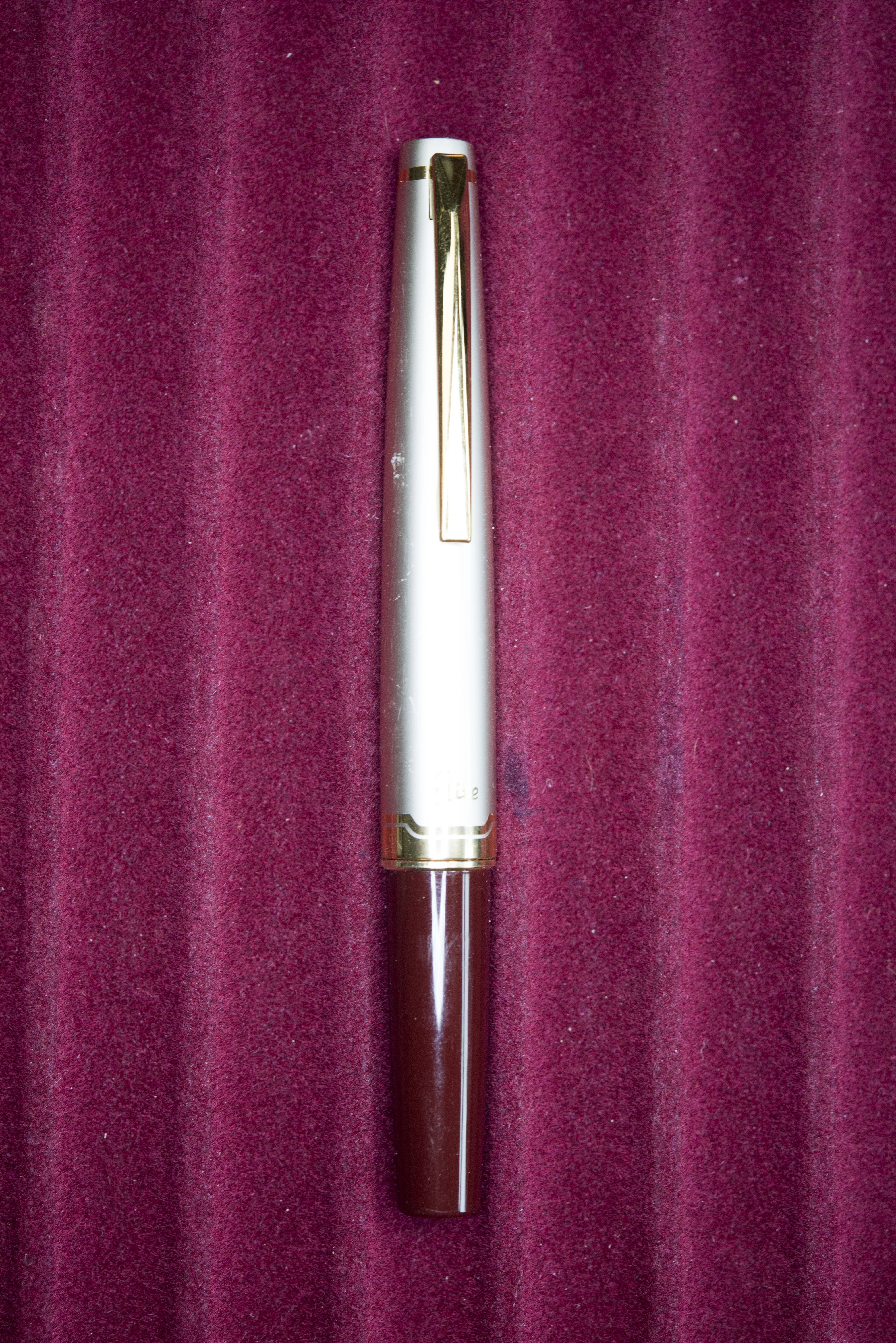 While originally known as a Long-Short pen, this would now be considered a pocket pen. The long cap makes it look larger than it really is, and when uncapped you have a full sized grip section and a very short barrel. 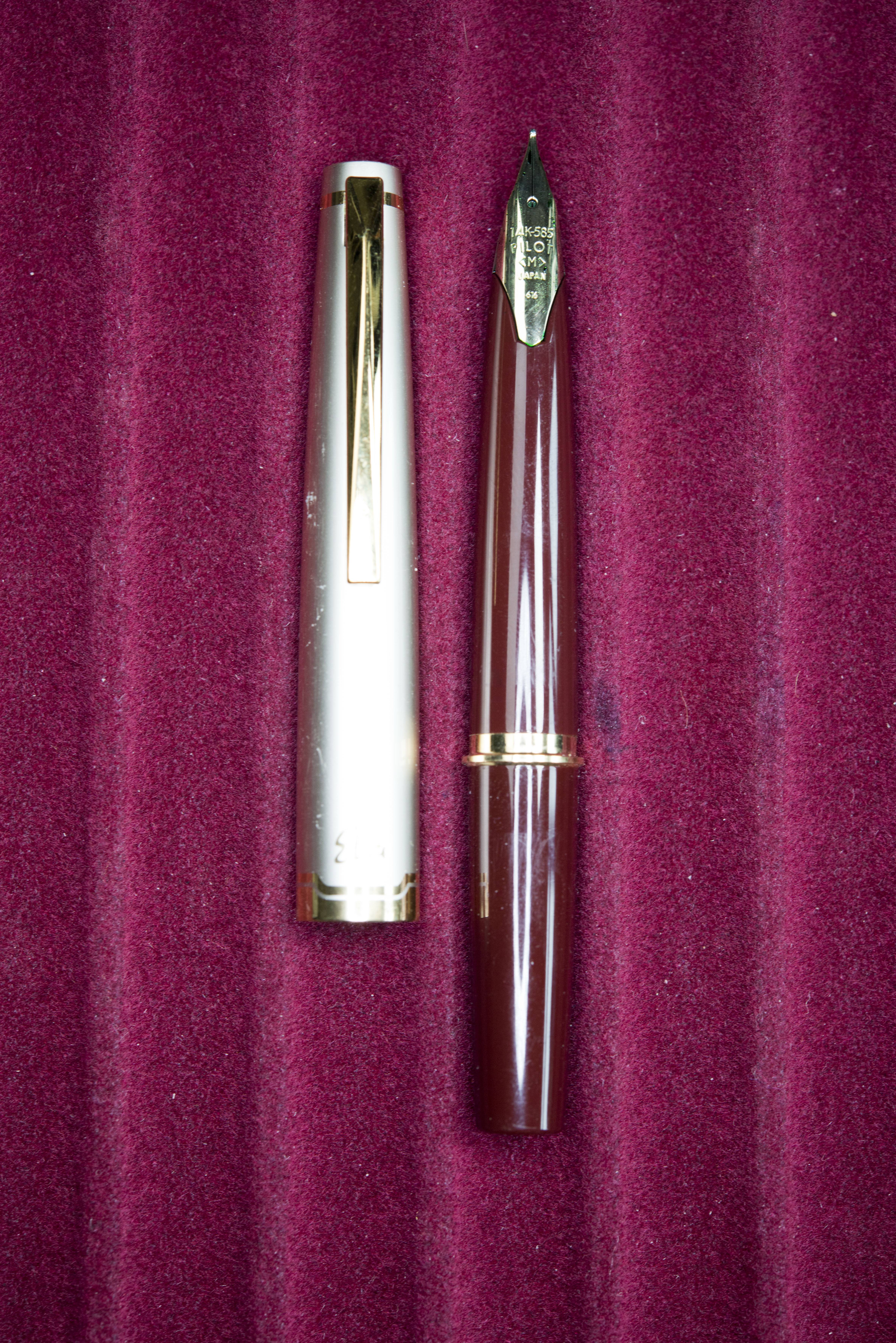 Removing the barrel it can be seen that this means the converter is deeply seated. With the original CON-20 this was not a problem as it was the side bar option, considered one of the best of a poor set of converters for Pilot pens, which would not let you see how full it was. Mine failed and was replaced with the more modern CON-40, which I think works just as well, and in this pen is just as impossible to check the ink level without removing the converter, which can be messy. 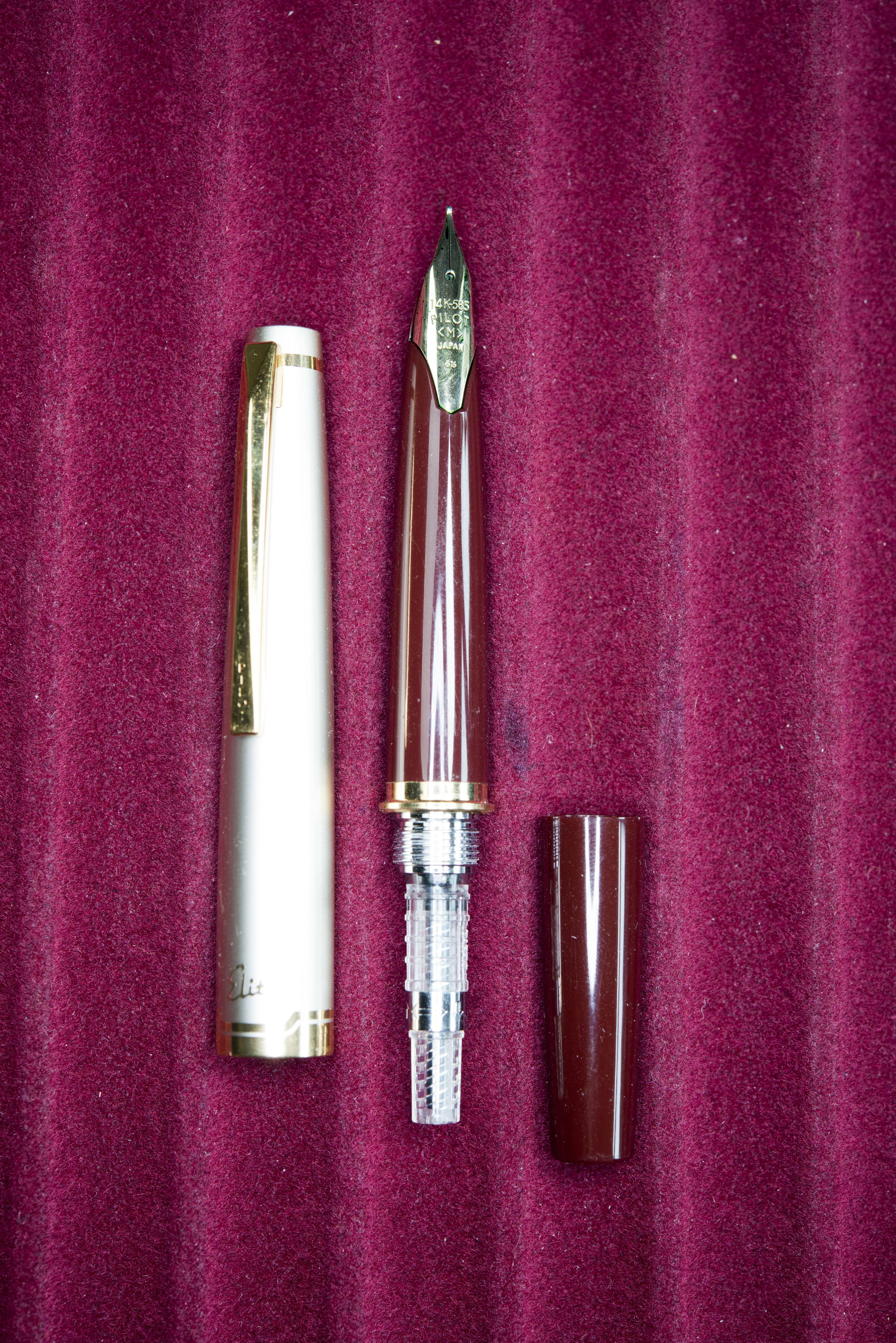 Uncapped the pen is too short to use (despite Figboot trying to do so in the video referenced in the introduction), but it is designed to be posted and when so it becomes a normal length pen, which feels very comfortable in the hand and nicely balanced. 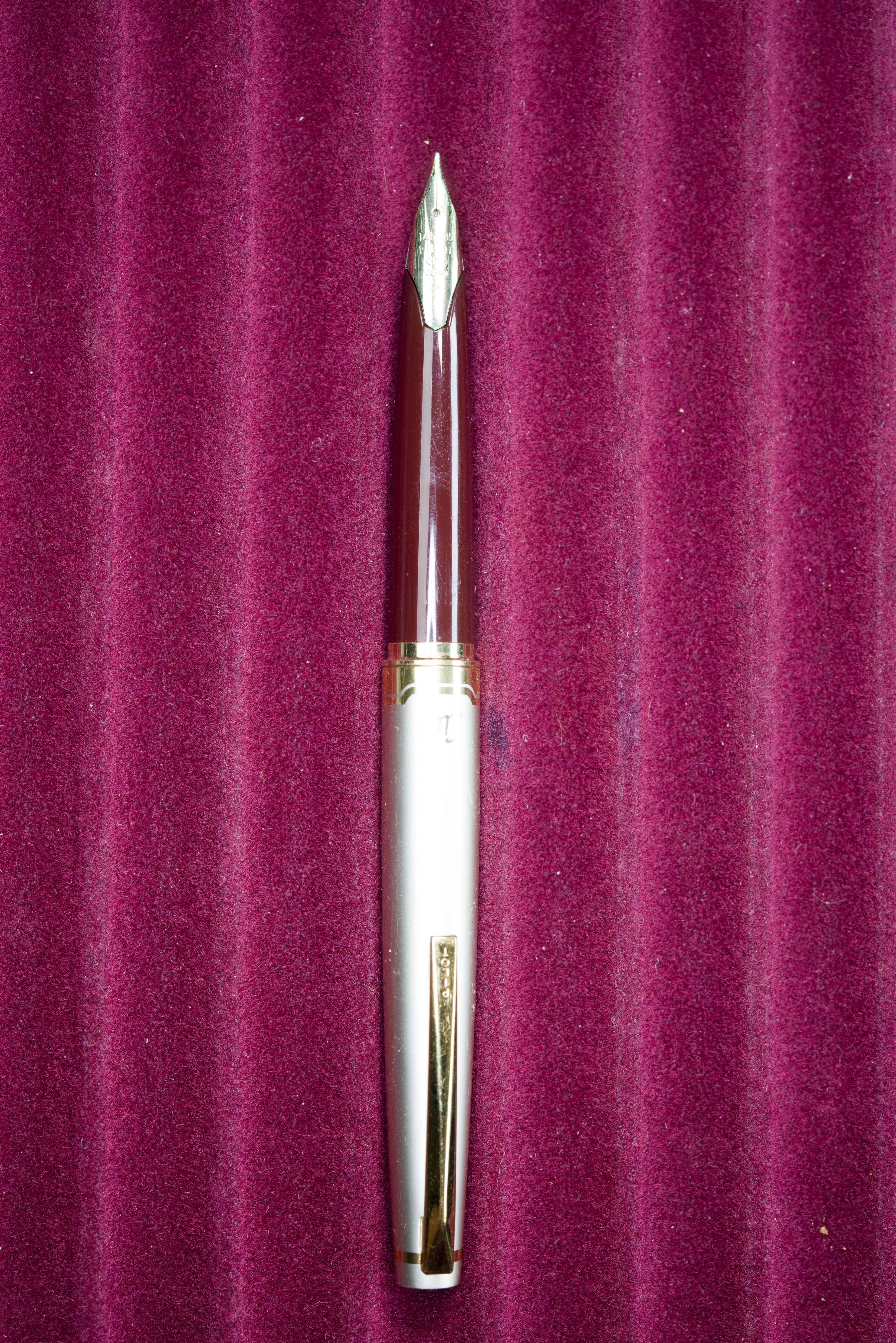 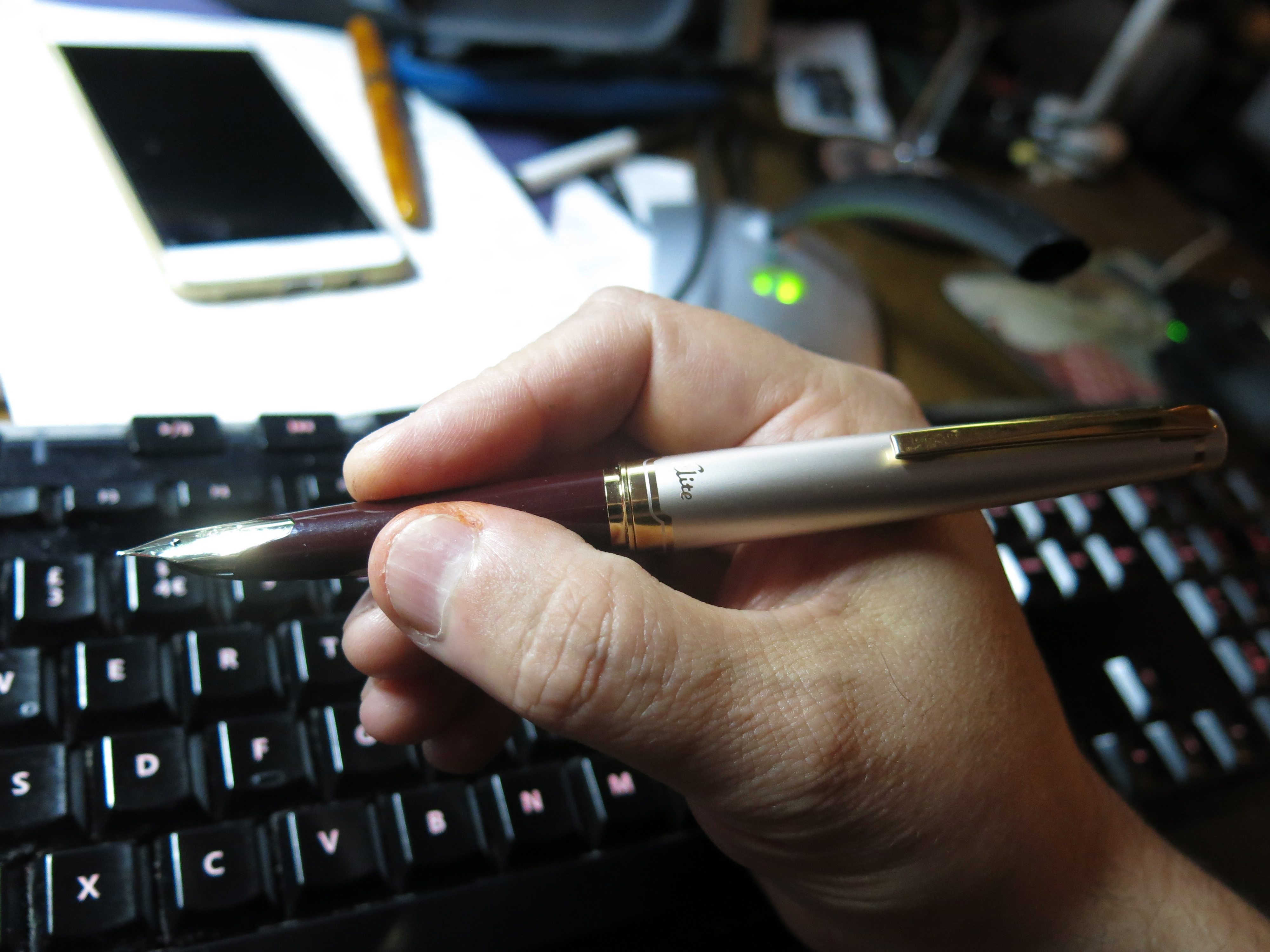 The cap is metal with a small gold band at the top where the clip connects to the pen. This is surface mounted and stiff. It does work well though I suspect over time the prongs holding the clip in to the cap could straighten under pressure resulting in it coming off. Still it must be remembered this is a pen for putting loose inside a pocket or bag/handbag, not clipping on to a seam.  At the bottom of the cap is a double band, the lower being considerably thicker than the upper. There are indents front and back for text, with the front saying ‘Elite’ (on the US model it is ‘E95S’) and on the back ‘Made in Japan’.  The bottom ring that can be seen below is actually on the grip section and helps secure the cap in place when posting. 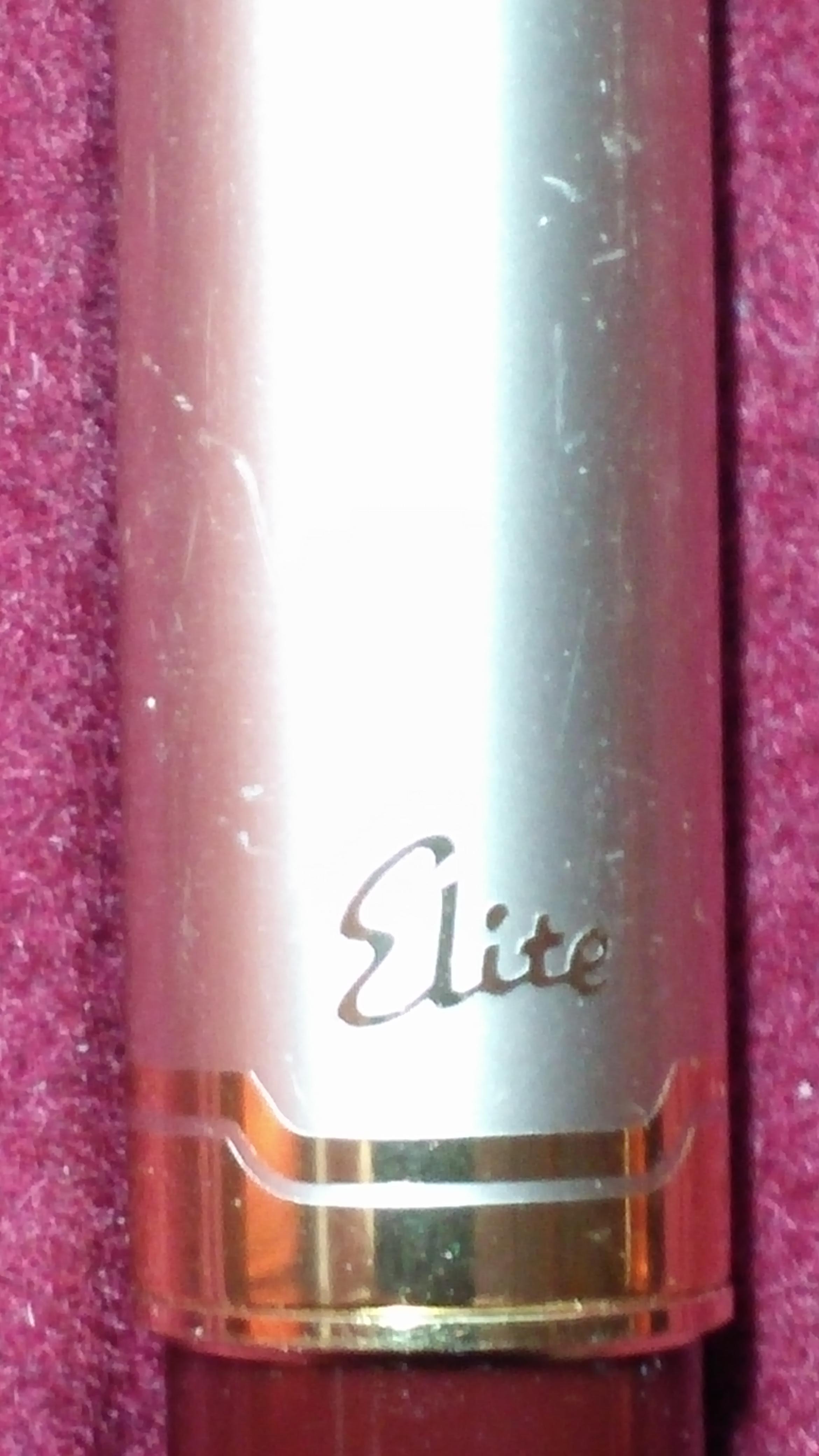 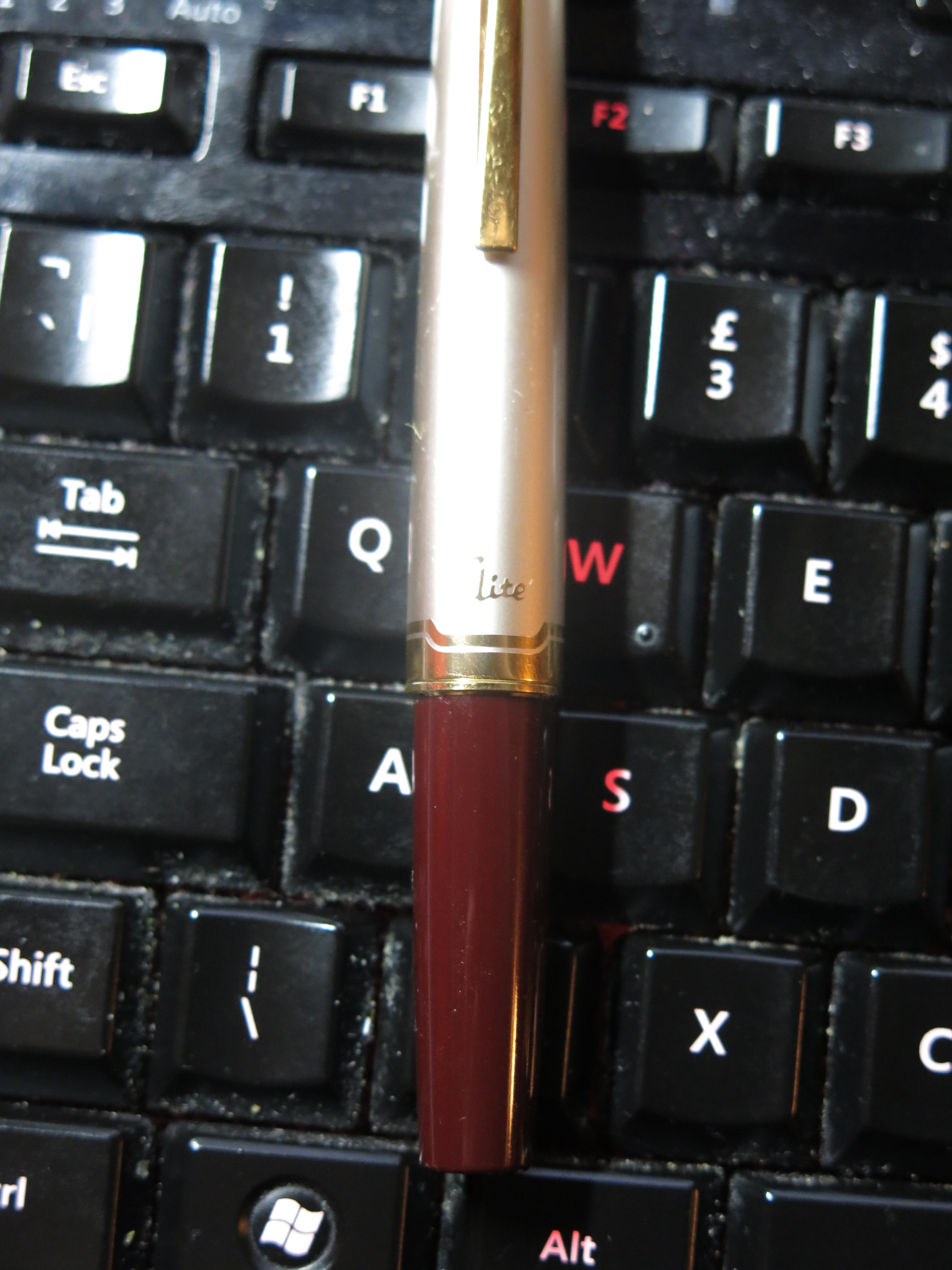 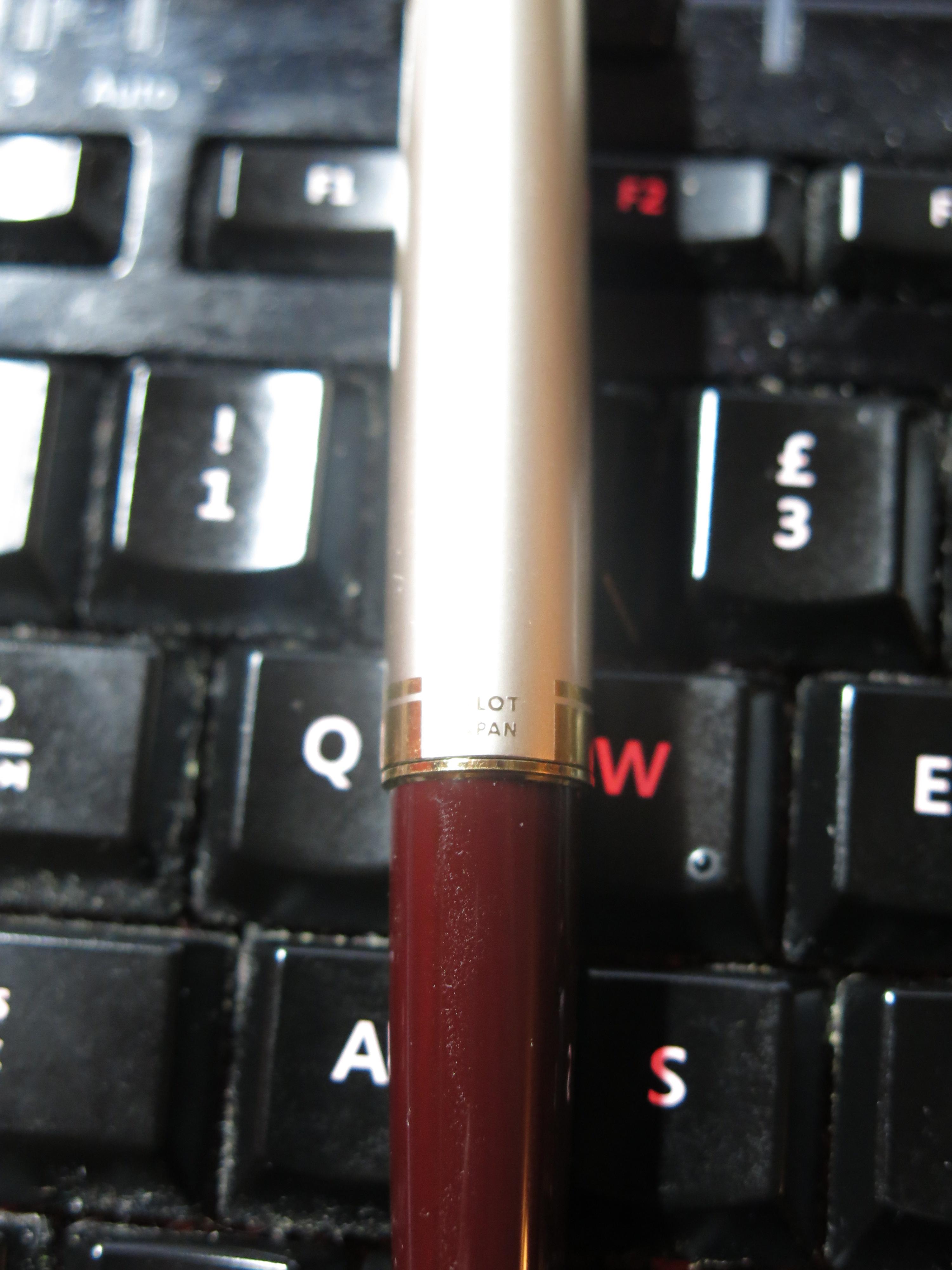 As mentioned before, the way the cap is lacquered/finished results in the cap being very reflective, I assume the text will be far cleared on the black pen.

The nib is 14k gold and inlaid. It is similar to the one the original pen and helps maintain the 1960s feel. It is more angular than a regular nib on something like a Custom Heritage 92 or 823, and this does help provide a little extra bounce and line variation. The feed is hidden and a combination of the two means that line laid down is on the wet side. Coming from Parkers and Reynold (bought from French Hypermarkets when I was a kid) of old, then a Waterman and TWSBI, the writing experience from the pen was a pleasure to behold and it is still really enjoyable. The bounce and spring of the nib provides a soft and buttery smooth experience, the opposite to what you’d get from Platinum or Sailor and even now works well for me. 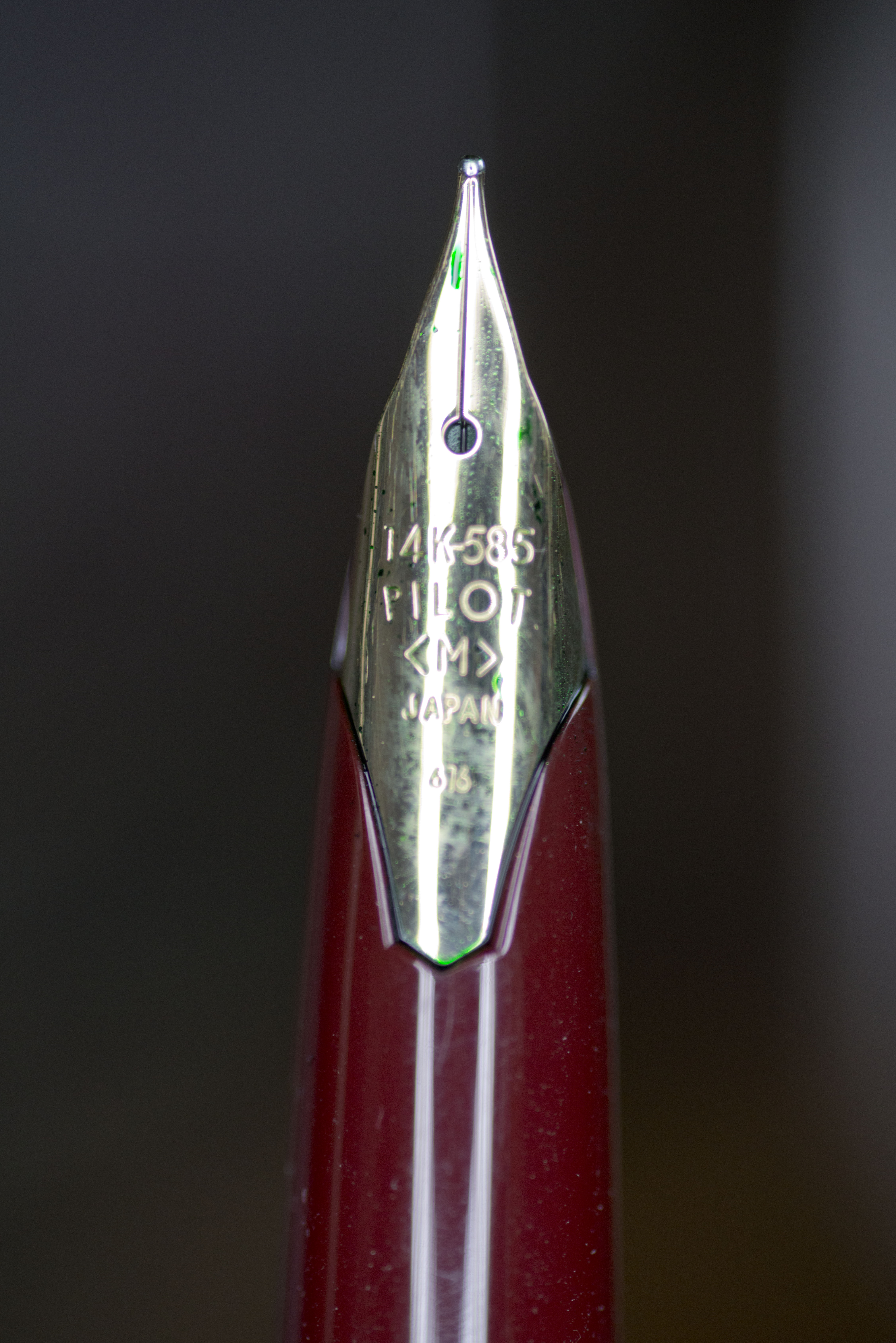 It is only when you compare it to other pens that its true size can be gauged. 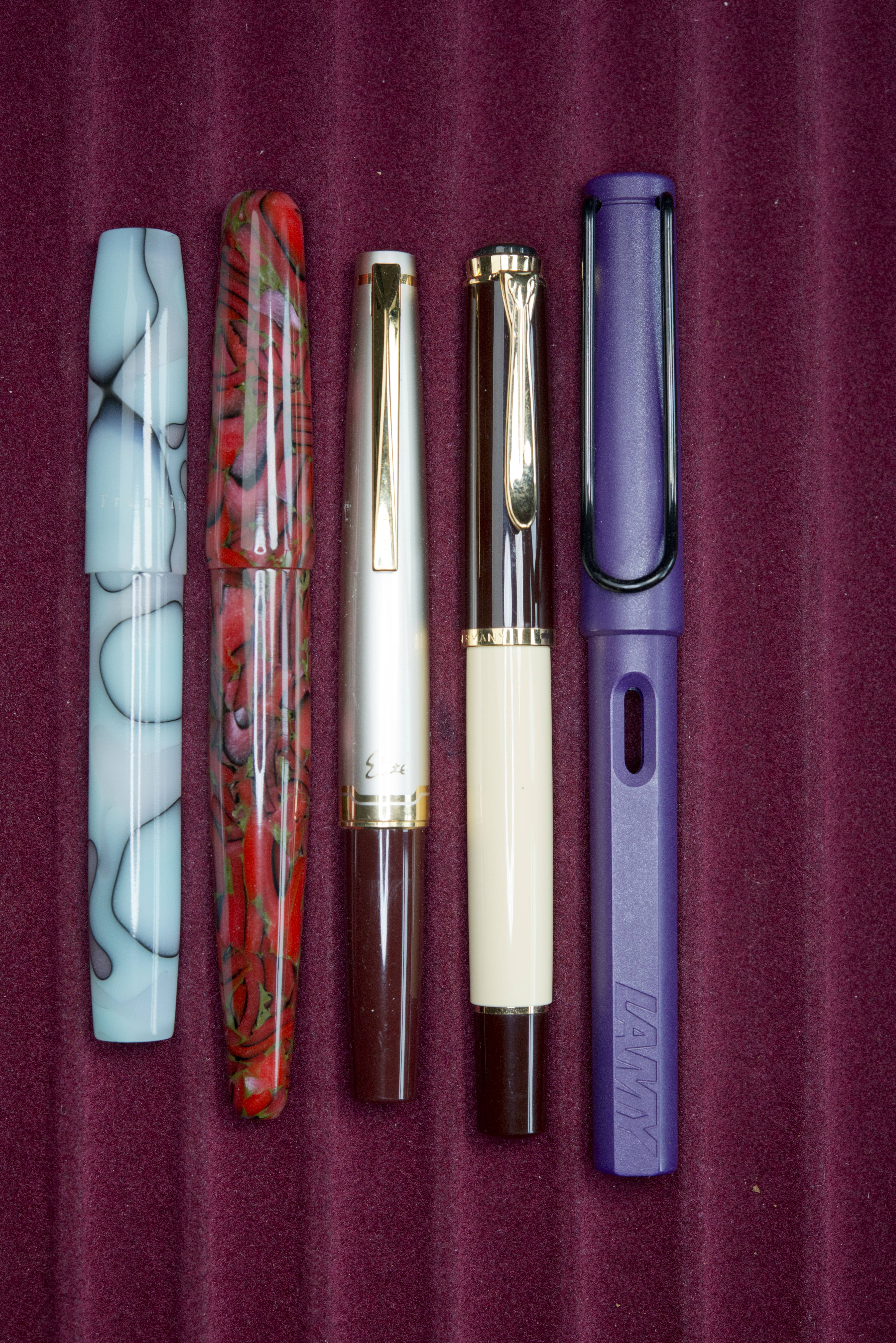 A Pelikan M200 is around half a centimetre larger when capped and the Lamy dwarfs it. The other two pens are from Franklin-Christopth, the 45 and the Pocket 66. The former is too small to take a converter, yet is only slightly shorter that the Pilot when capped. 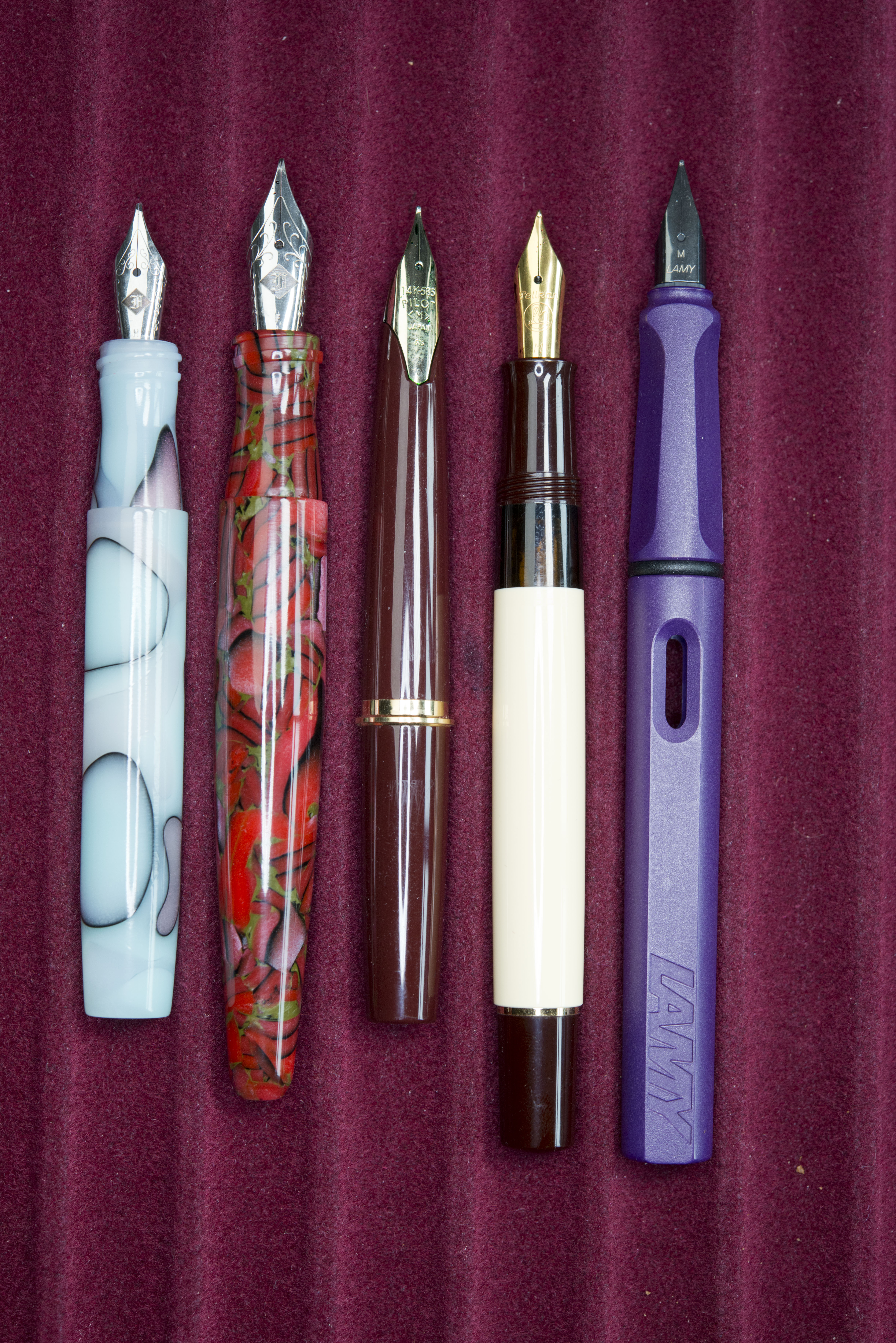 Uncapped and the pen makes you wonder just how you can fit a converter in it. Almost certainly the CON-20 and the CON-40 probably hold half the ink of a cartridge. 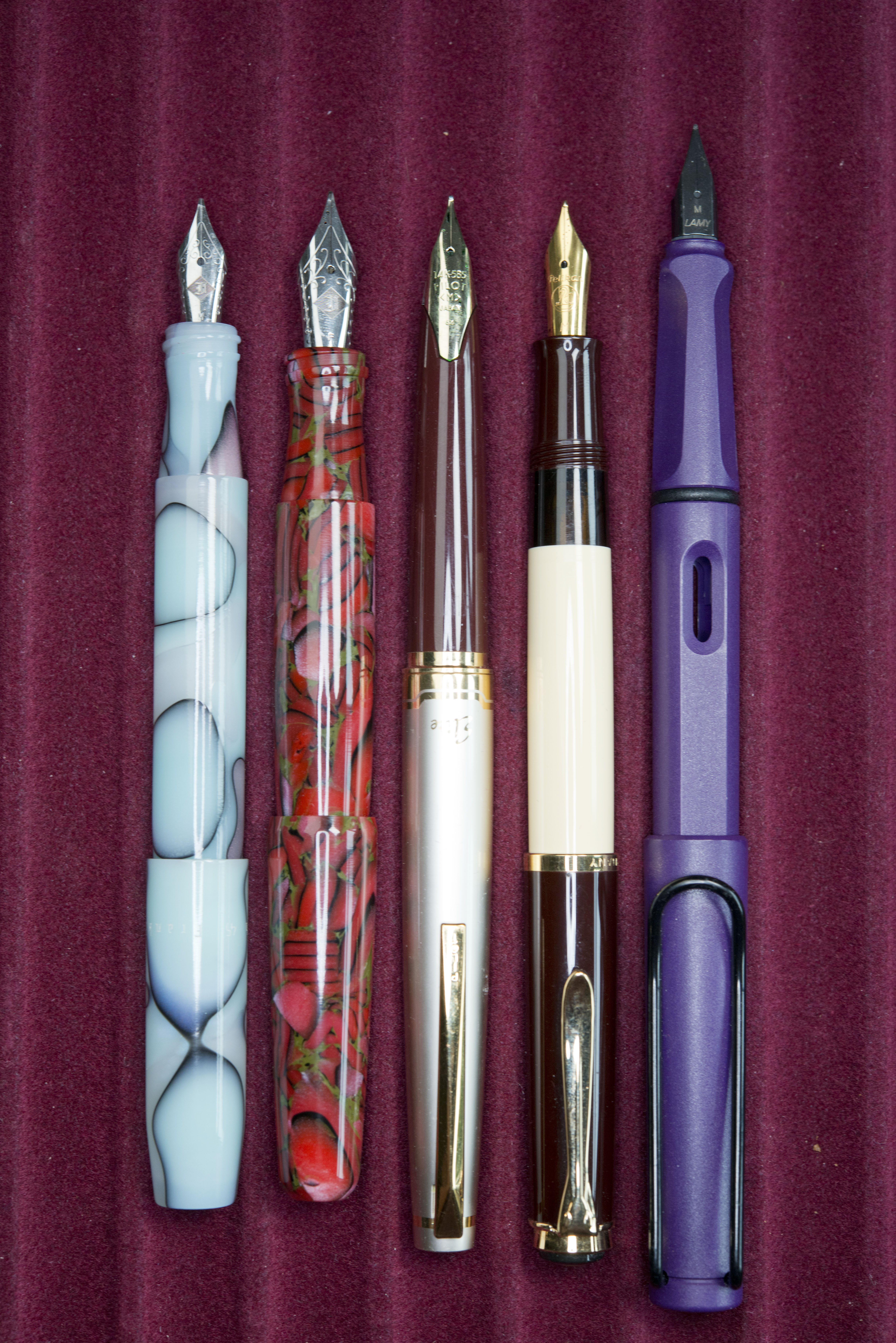 It is when posted that it transforms in to a more normal size. Interestingly it is now a similar in length to the M200, however posted it does not have the same back weight balance problem of the Pelikan pen, though of course this is by design.  Note I did compare the posted Pilot with the uncapped Lamy and the former was longer, though in the hand you would not notice.  From the previous few pictures you might also have noticed that the pen is on the thinner side in the section. It’s not pencil thin, but over longer periods the hand can tire. If, like me, you find the Pilot Vanishing Point quickly becomes uncomfortable due to the tapering over a short length, then you do not need to worry with this pen as it is far less extreme.

I’m not sure how the E95S is packaged, but the JDM pen comes in a clamshell box with a transparent lid, around which a black cardboard sleeve sits. 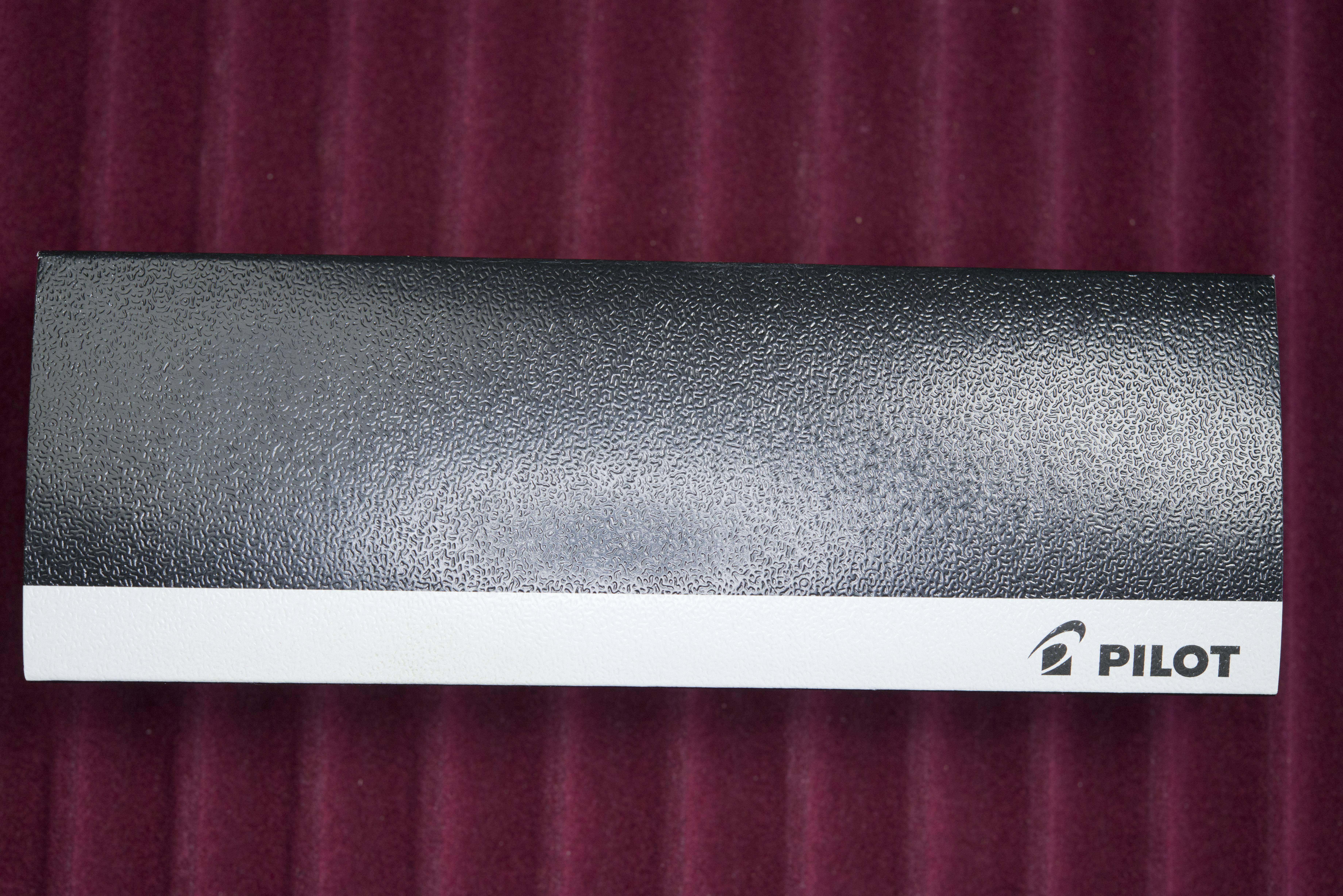 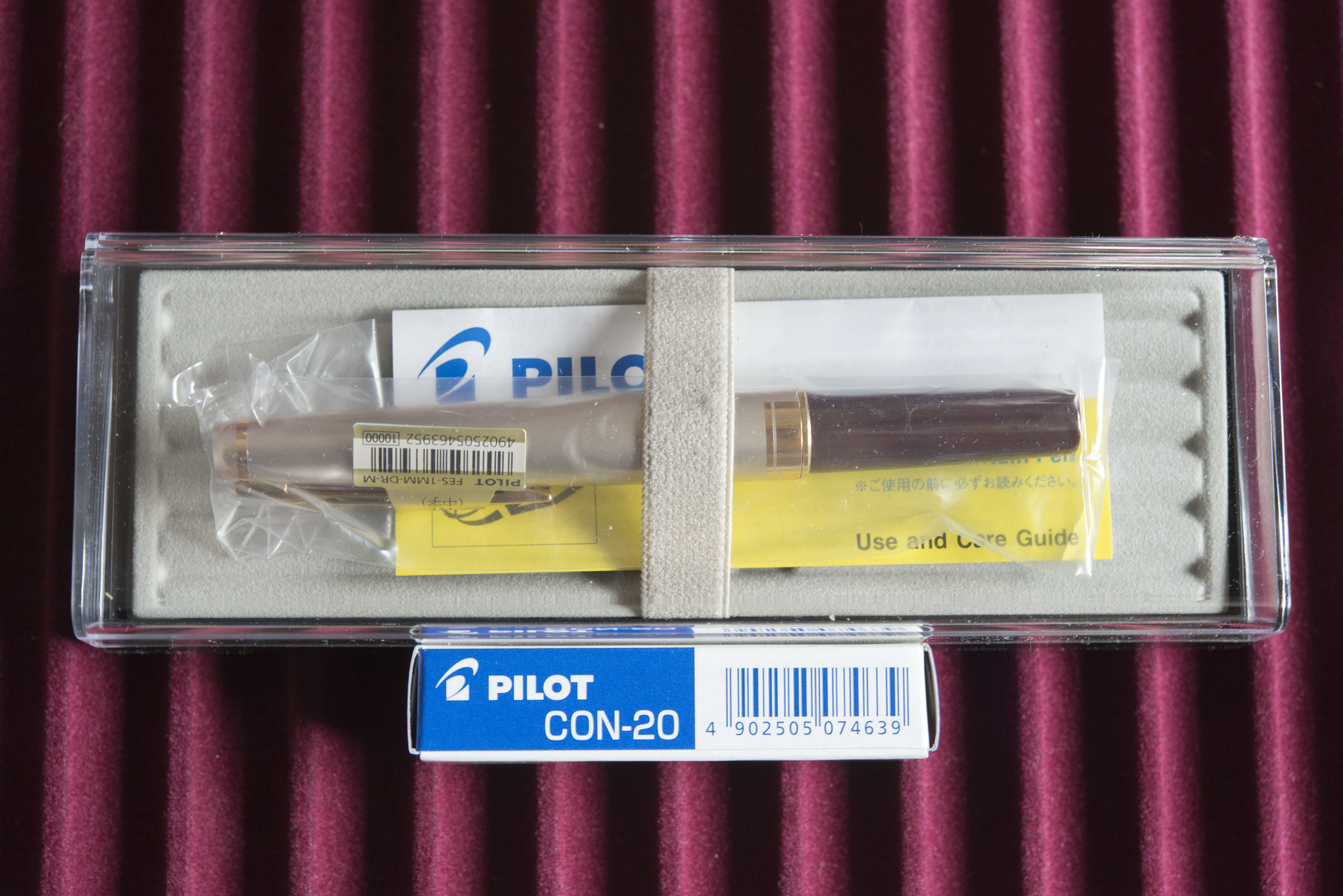 The pen was in a sealed bag with a cartridge alongside it (forgot to include in the staged unboxing pictures). There was also a small user guide. The cushioned tray is stuck to the base.

As can be assumed from above I like this pen.  Sure it has been in a drawer for a few years, but it is nice to use every so often and so is unlikely to appear on my For Sale list.  I’m not sure why it is only available in the USA and Japan (and under two different names), but then we’re also missing other pens in the UK and Europe including most of the Heritage range (even the Custom 823).  The nib is smooth, bounces slightly and is wet.  The pen, when capped, is well balanced and a comfortable shape to be held for long periods of time.  In a day when pocket pens are compromises more targeted at short note taking, it is nice to have a pen that takes little space, yet provides a large pen experience. For me I am glad I bought the pen, and while the usual caveats exist over trying before buying, at £60 before postage and taxes (so roughly £80 all in) this is a pen that I think is worth the risk. 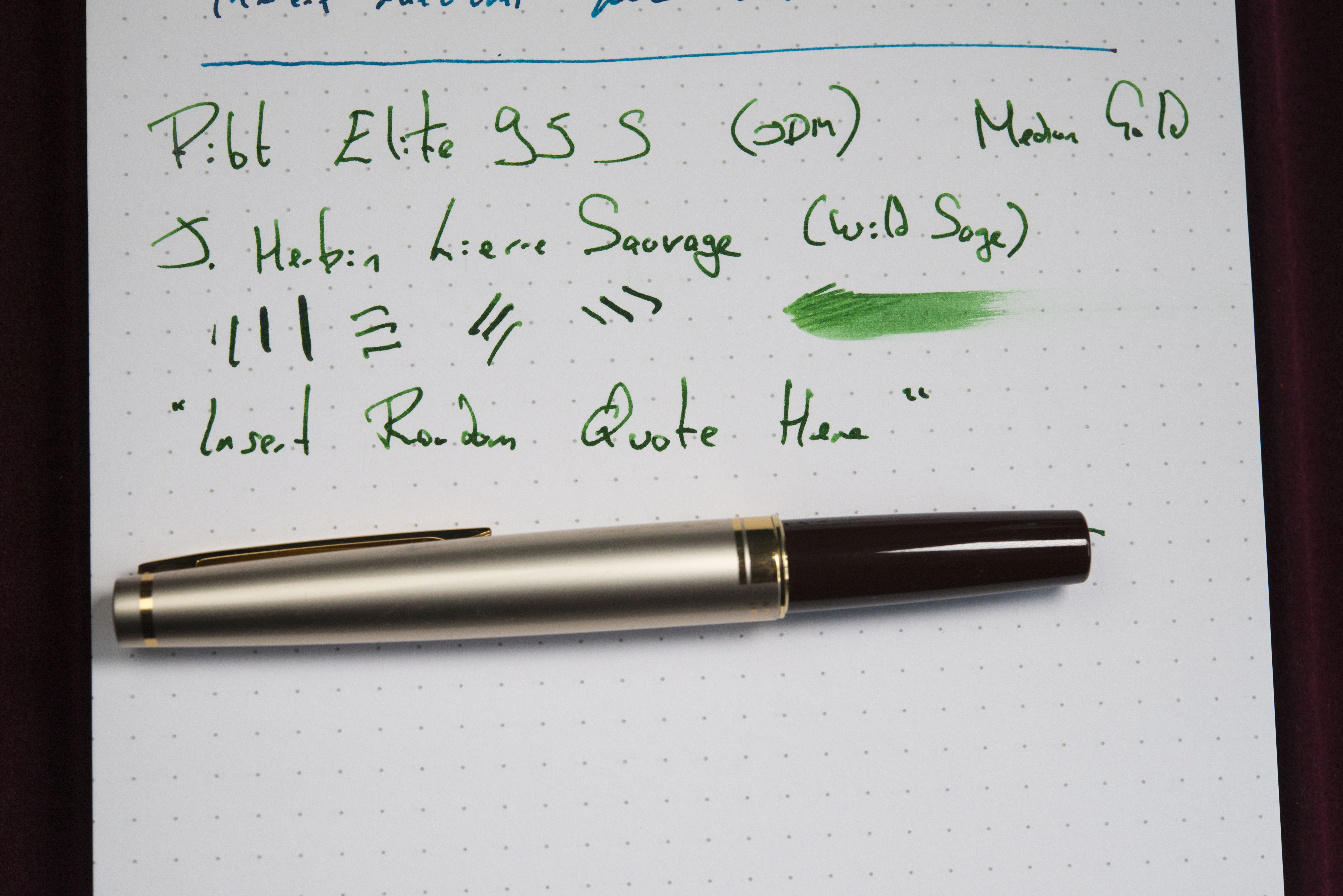 Postscript.  While most cartridge/converter designs result in the end part being secured/squeezed from outside while the peg of the feed sits within, the Pilot design has the peg doing the securing.  On a cartridge, if reused (syringe filled), this results in loose then failed fittings.  The same can happen with the converters, just over a greater length of time and this did indeed occur with my original CON-20.  I noticed that the cap would be full of ink when I opened it and also that the pen ran dry rather quickly.  I found the reason by accident.  The converter connection was becoming loose resulting in it moving backwards and forwards in the section and barrel.  The result was it became a pump, forcing the ink out through the nib.  The new converter fixed this.