I was not alone in being intrigued when a new post appeared on the FPN forum from a South Korean, who while on national military service, in his spare time designed pens and the machines with which to make them.  He is now in the situation to start producing and selling, though his website is a little bare at present.  The current range comprises of two pens.  The Symmetry, long, cigar shaped and with a seamless cap, plus the Asymmetry, long (though shorter than the other model) wider, and with a more traditional overlaying cap.  Both made from Japanese ebonite.  What makes these pens more interesting is the nibs.  He makes them himself and out of Argentium (935) a silver alloy which contains a higher level of pure silver than sterling silver, is more resistant to tarnishing, and is meant to be tougher.  Additionally he also makes his own feeds, meaning only the converter is sourced externally (and the creator is presently working on a refillable cartridge for his pens).

I remember the original post (details of which are in the ‘The Fountainpen Researcher‘ profile on FPN (note the creator does not give his real name, with his email address being beastmaster90 – presumably from a computer gaming youth, and MechGyver)) and was attracted to it.  Fortunately for me I was not alone as Anthony/Eciton at the UK Fountain Pens blog bought one of each type, reviewing them, and then lent them to me. 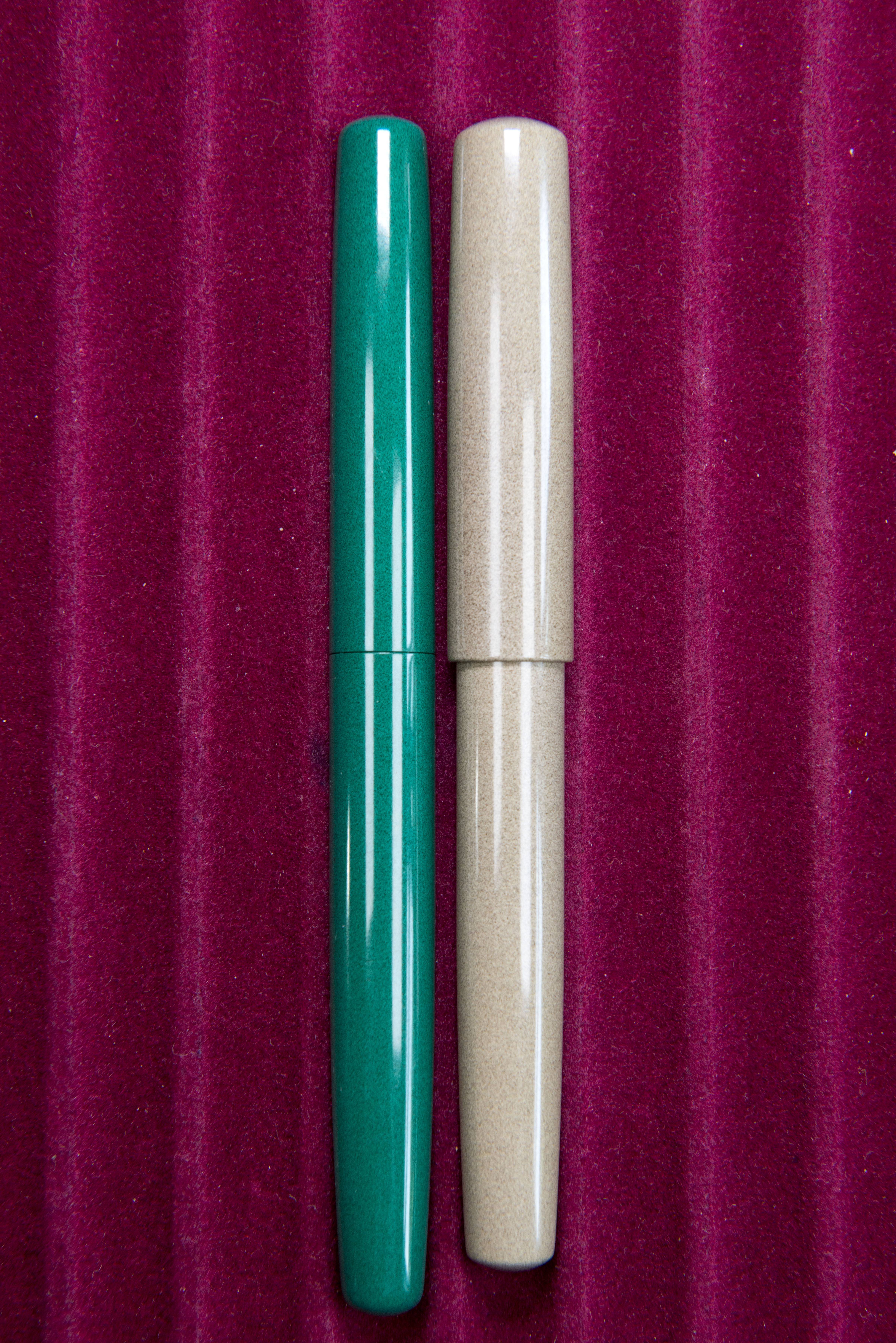 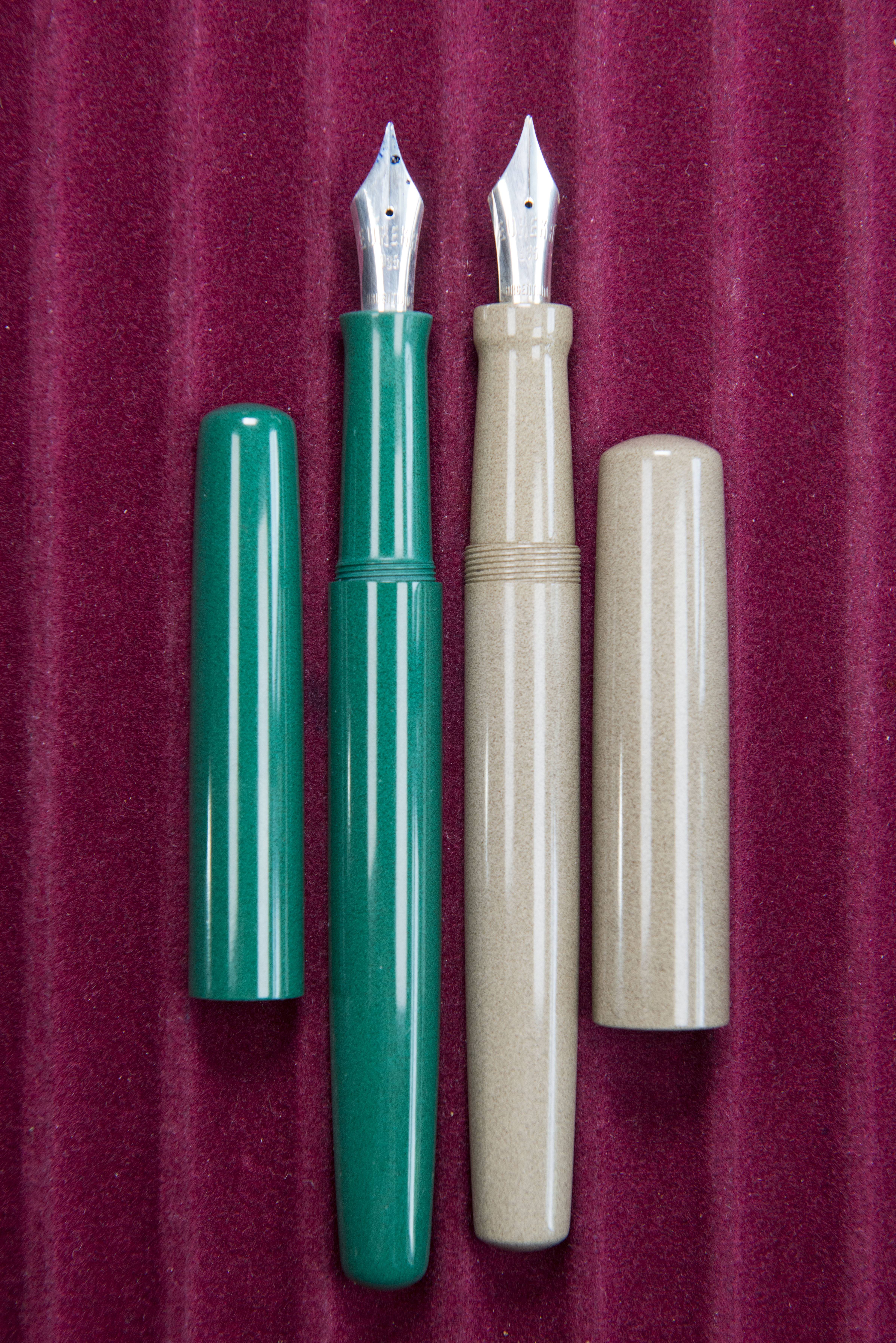 The two pens are not just size variations on one design.  The grip section and the way the threads are implemented are different and this does make them distinct from each other.  Shape wise the looks very generic while capped.  The Symmetry as a long cigar with flatter finials, and the the Asymmetry closer to an enlarged 1940s Parker or Conway Stewart without the clips and metalwork.  This should not, however, be taken as a negative.  These are very well made, from Japanese ebonite (apparently he originally tried Indian ebonite, but found the quality too poor), have a very good level of finish and are very well put together. 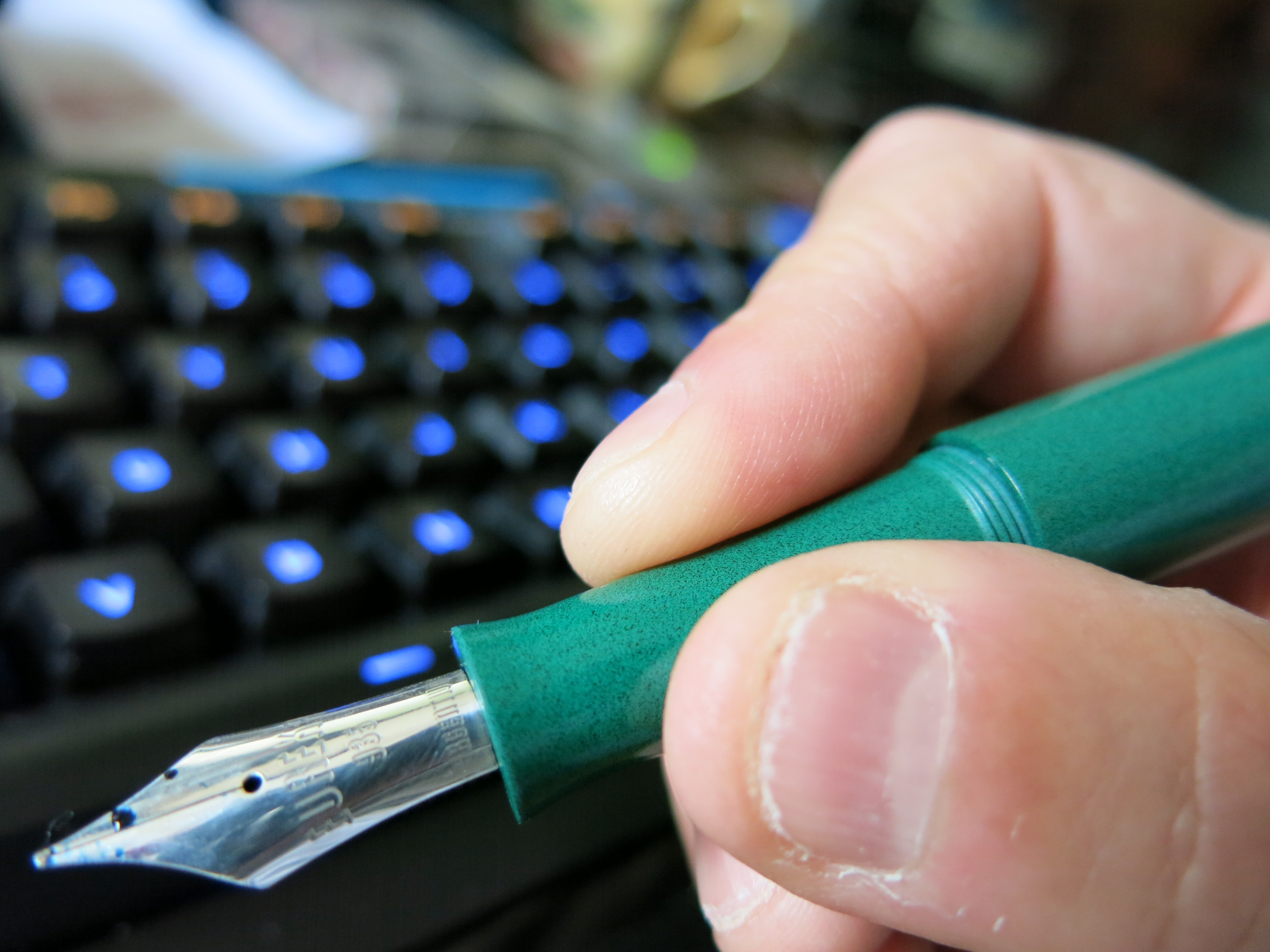 With the cap removed, the Symmetry has a long, classically shape grip section and a single thread that is use to secure both the body and the cap.  At no time did I have any problems removing the cap so the different tension levels on the cut threads works well.  The section is so long it is easy to find a comfortable hold position and the outward tapering by the nib is very effective at protecting the fingers.  The threads and slight step to the barrel are noticeable when you move your finger across them, however they are not sharp, and while ‘hard’ you very quickly stop noticing them, even when hold the pen that far back (which is a fair way). 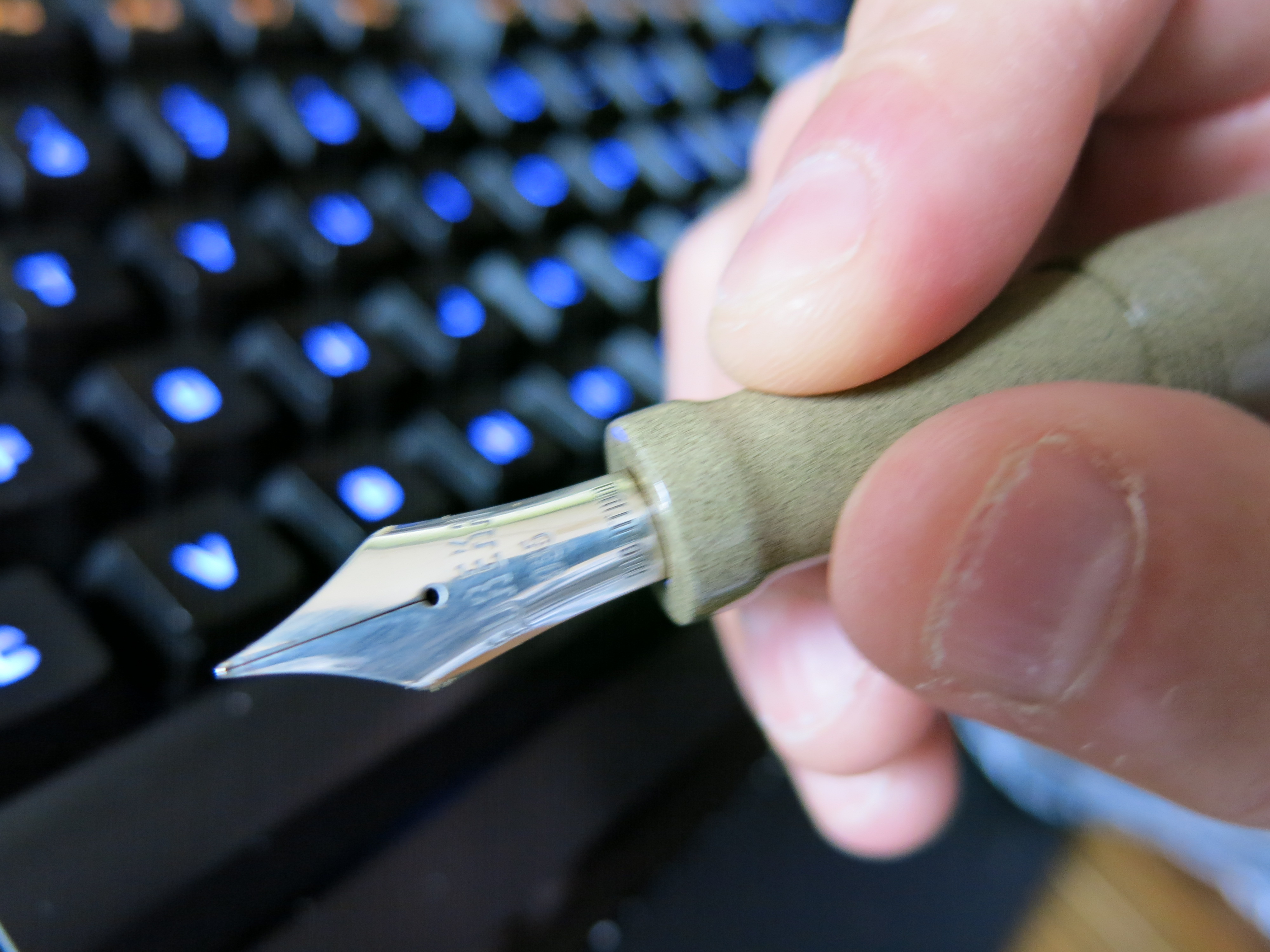 The Asymmetry model has a differently shaped section.  It is shorter, though still comparable to a larger pen, angles in slightly more steeply, and then there is a wide, substantial rest at the end, giving it an almost rook chess piece appearance.  In some respects I find it the more comfortable to hold, though this may also be down to the width as I tend to prefer more substantial pens.  The threads on this one are separate for the cap and the barrel, presumably as there was no need with the cap edge not being flush. 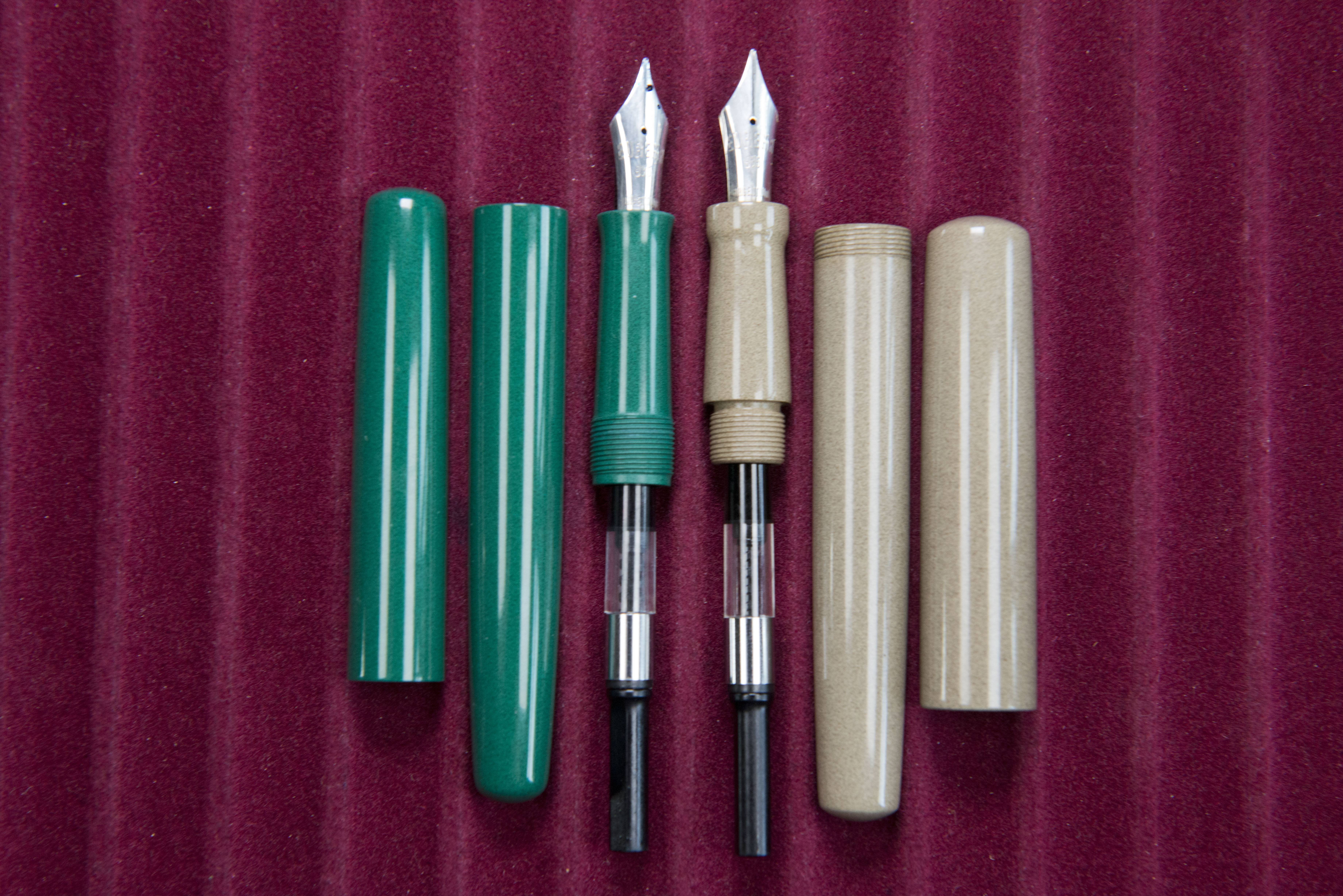 I do not know if the pens can take cartridges, these are not mine so I’m not going to experiment (and I do not have the boxes so do not know if they came with any), however the installed converters look (to me) close to the new generation of Chinese/Jinhao ones, which are not International Standard.  Needless to say they are very secure in the sections and also quite deeply houses, so there’s little risk of knocking them loose on removing the body.  As mentioned earlier, the creator is looking to make his own refillable large capacity converter. 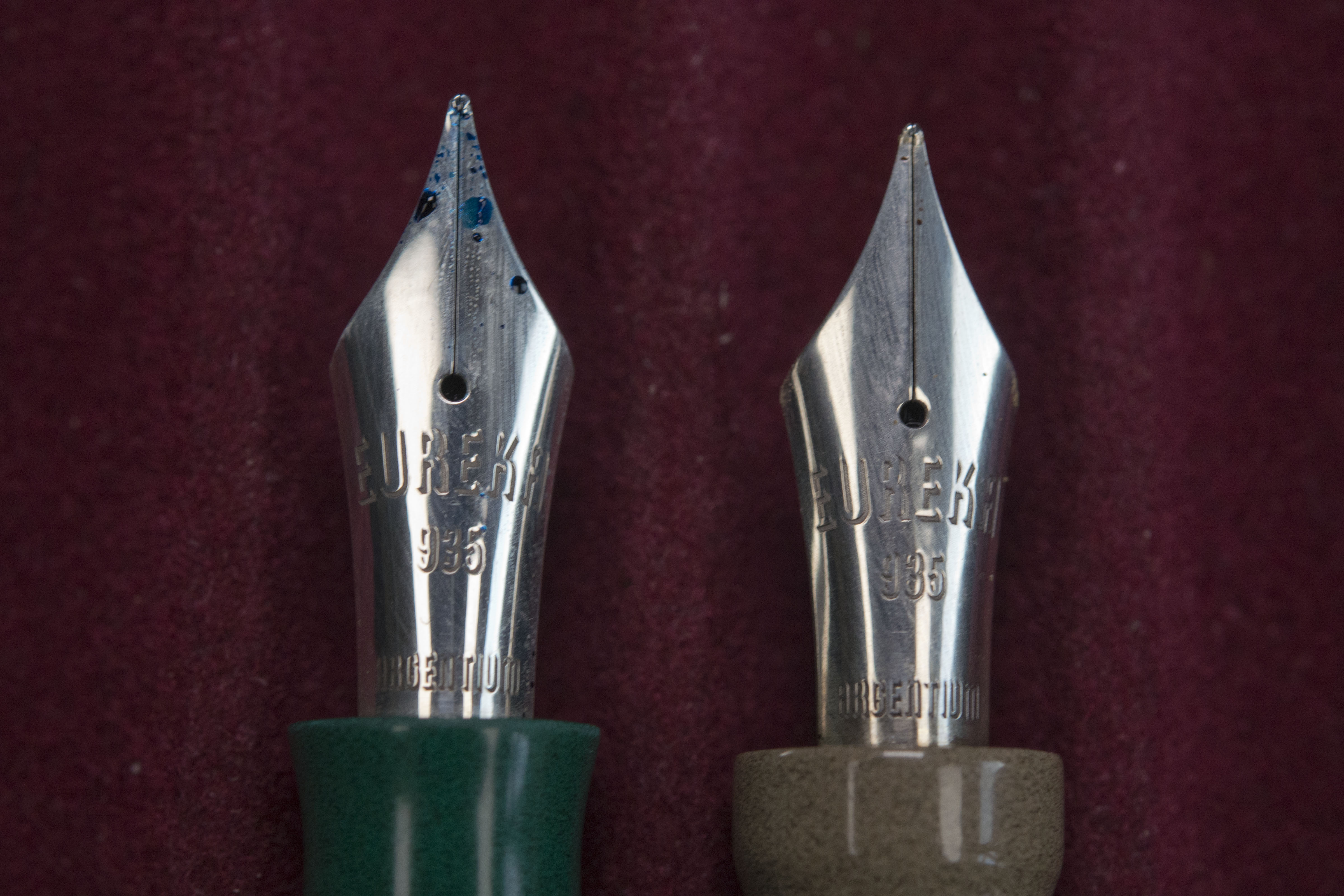 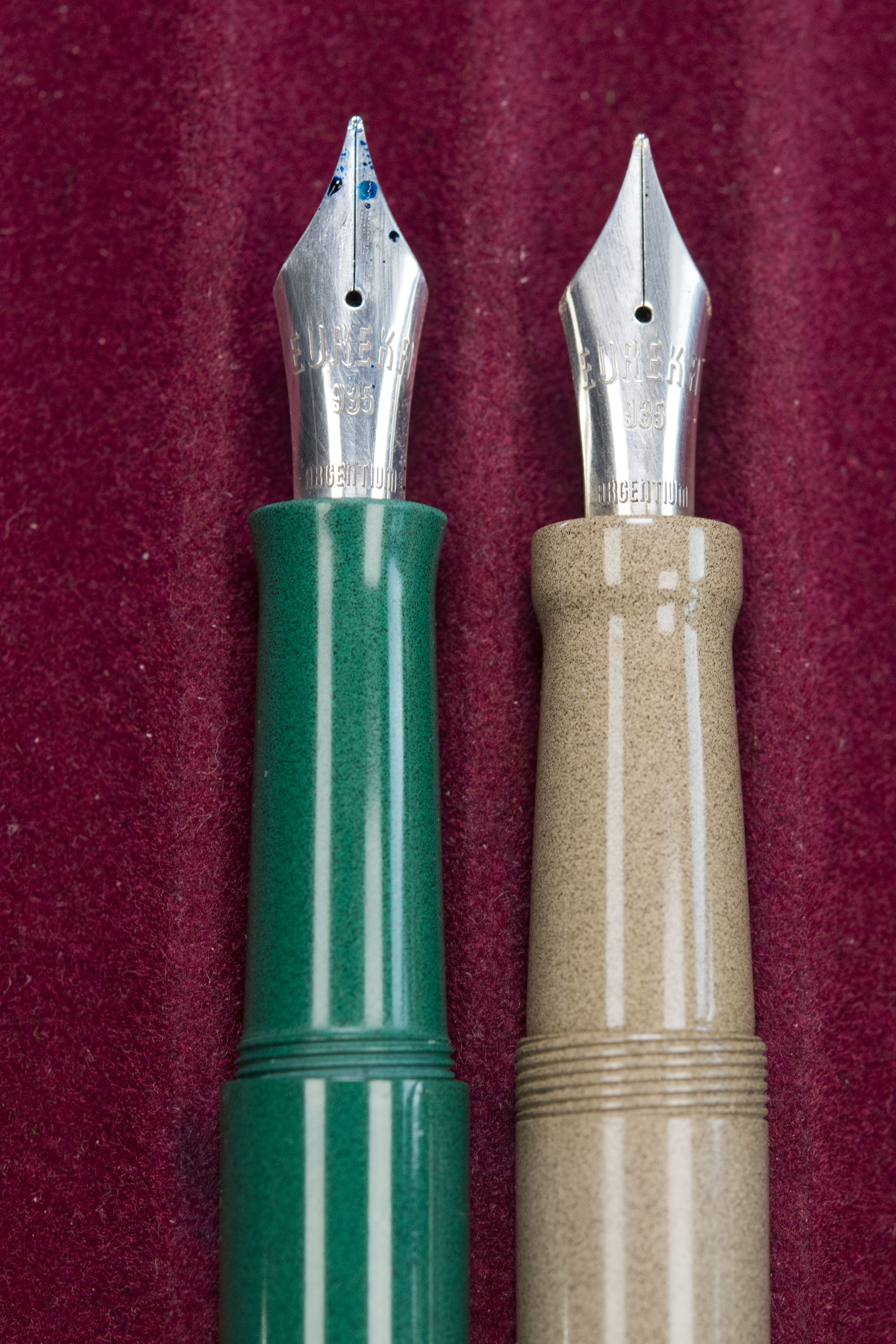 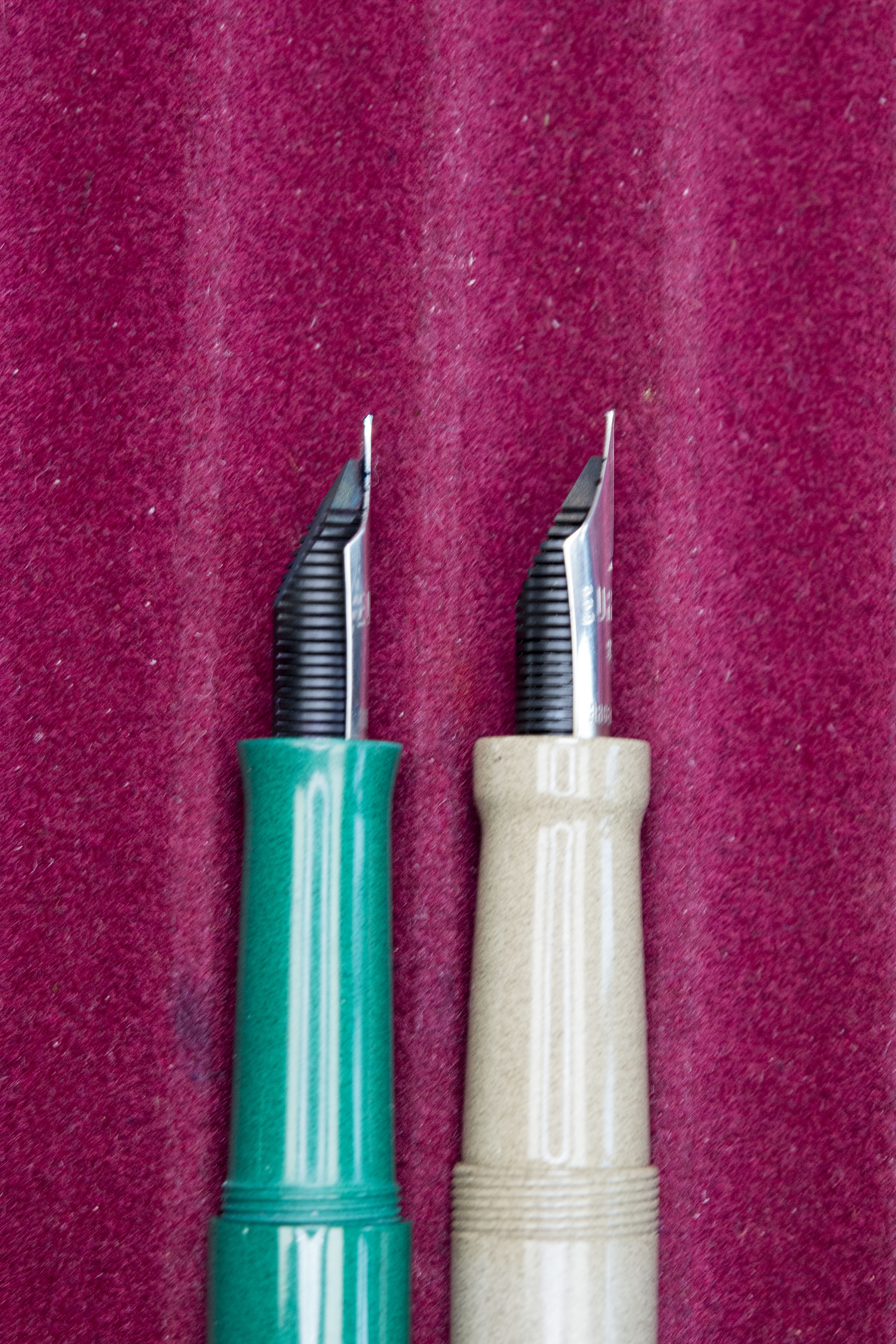 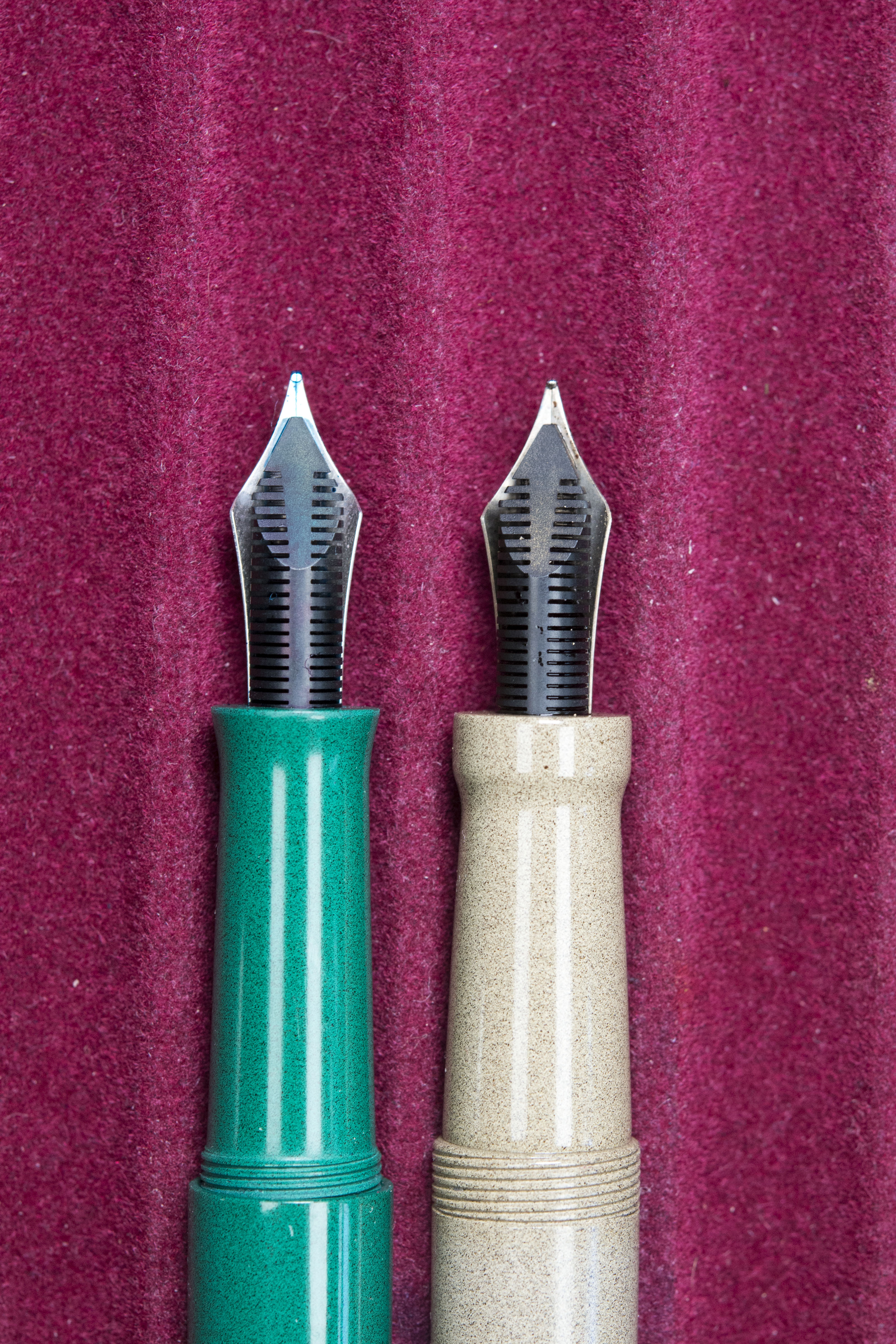 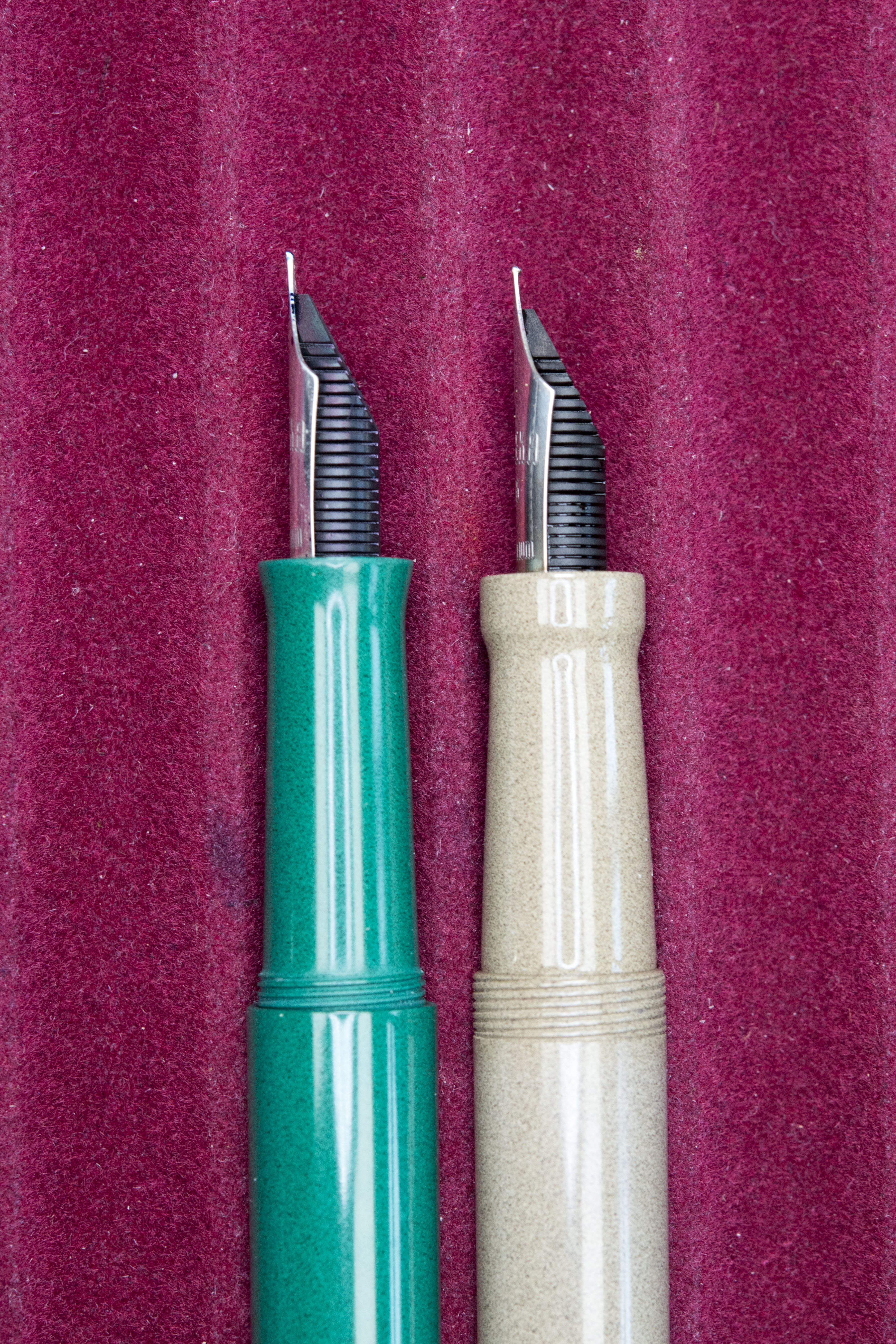 So the nibs and feeds.  Even with the big manufacturers it is rare for them to make their own.  Pelikan, Montblanc, Lamy do, as is also the case for smaller companies such as Aurora and ScriBo, but most just get bespoke units made for them by Bock or JoWo.  There are one or two very small companies who do or did make their own nibs, but these tended to be expensive due to the time requirements, with the nibs being forged.  At the price of these pens I suspect they are stamped and pressed (as with virtually every other nib out there), before being tipped.  Much kudos for the creator in going this far, as does making his own ebonite feeds with a complex air/ink path.  The writing experience does differ between the two pens and also shows very much that these initial pens are more akin to a late beta or work in progress/development, which was also reflected in the cost.  The nib in the Symmetry is bouncier than on the Asymmetry and feels wetter, though on testing I’m not so sure.  Certainly the latter is a lot more nail like.  Note I’m not willing to try flexing these nibs as the pens are not mine, plus I have slight concerns I’ll mention later.  One thing I did note was the nibs were very paper sensitive, showing the occasional hard start, and occasional ink starvation.  At first I thought this might be down to the nib grind or the feed, but then I noted the problem only occurred on certain paper types, though oddly the better quality papers.  Sure the Midori paper I use is renowned for being picky (and seems to hate virtually every Visconti nib), however I was surprised to find Oxford Optik (same paper as Black’n’Red) also showed the same issues.  Both pens suffered, though the nib on the Asymmetry pen proved to be more reliable.  On cheaper, more absorbent paper, both were actually fine.  Net result I’m not sure what the cause is, I still suspect the feed – the inconsistency of hard starting removes (to me) the grinding of the tipping out of the equation and could be more down to quick evaporation/drying with the cap not on, though we are still talking about the time scale being short pauses, not minutes uncapped.  Looking back at my scrawling on Optik paper I also note that the nibs were at times slightly scratchy, with the nib on the Symmetry occasionally catching the paper when rotated too much.  Note I’m not sure how the patterning on the nib has been applied as it feels smooth to the touch, unless it has been burnished in and polished over.

Writing experience wise, both are large pens, though the Symmetry is thinner and as a result I do find the Asymmetry more enjoyable to hold.  Both are comfortable, light weight (being ebonite) and well balanced.  While the writing experience proved to be a bit hit or miss I do suspect that will be down to early production/late prototype days and future pens will improve. 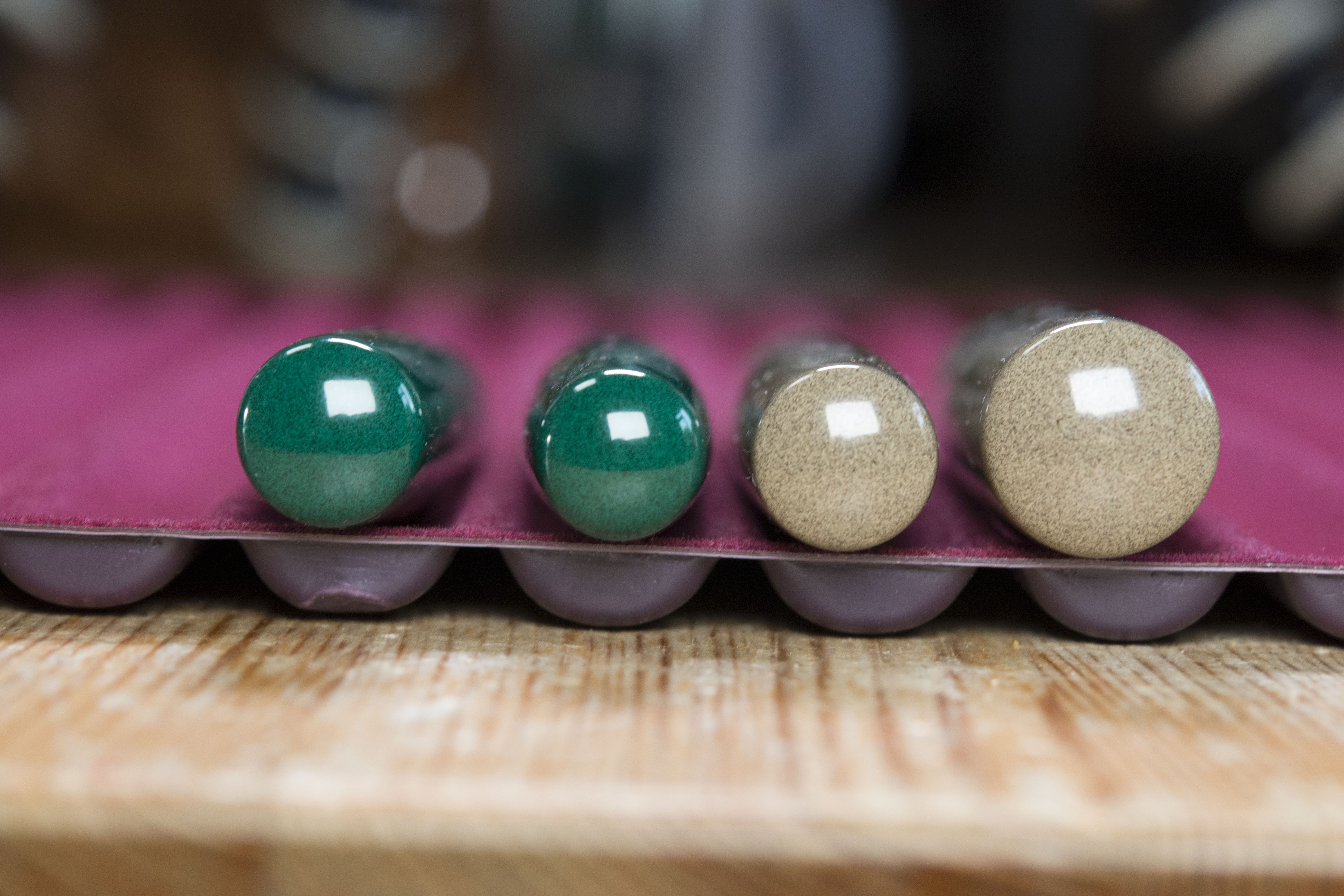 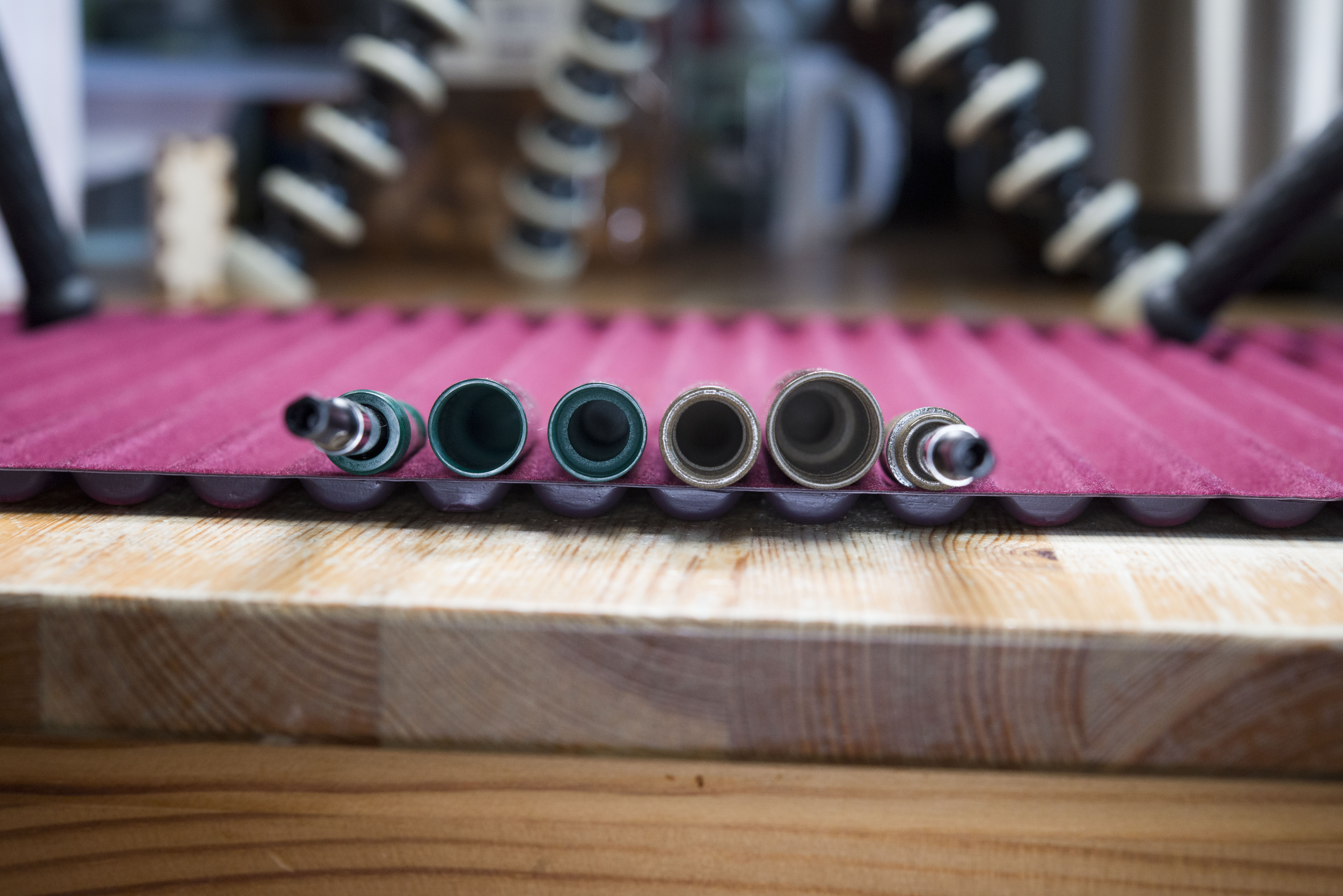 The fit and finish of the pen are very good.  I suspect a level of OCD from the creator, not just with the way the pen is put together, but also from his desire to make his own custom manufacturing equipment.  This is a one man band and from what I can tell , a young one as well, so as well as time he will have committed a lot of personal finance to the project, presumably with the aim to make Eureka a full time pen manufacturer/business.

So any downsides and concerns.  There is one, which may be a real elephant in the room for these pens as they are, and that’s the nib.  Argentium may be stronger than sterling silver, but not by that much.  I still worry that over time it will either soften, effectively irreparably springing the nib, else the tines may snap/crack.  It should be noted on the Eureka website, under the R&D pages there are examples of his own gold nibs, so if I do prove to be right about the longevity of argentium nibs, it’s not a killer for the company.

There is one thing I have not yet mentioned.  The price.  Ignoring the very cheap urushi 3776 barrel prototypes, which are all sold, these pens each go for just $150 with the medium argentium nib (fine and EF cost slightly more).  For a hand made/small manufacture Japanese ebonite pen it is not far from the price of a handmade Indian pens (and some of those now cost far more), but this is for a large, extremely well made fountain pen (far superior to all the Indian ones I’ve seen or owned) and with local employee costs being some of the highest in the world.  Net result is I think these pens (assuming no nib problems) are extremely good value and over time, if Eureka are to become a full time manufacturer, I suspect the price will need to rise to cover manufacturing costs.

Size Comparisons (showing just how big they are): 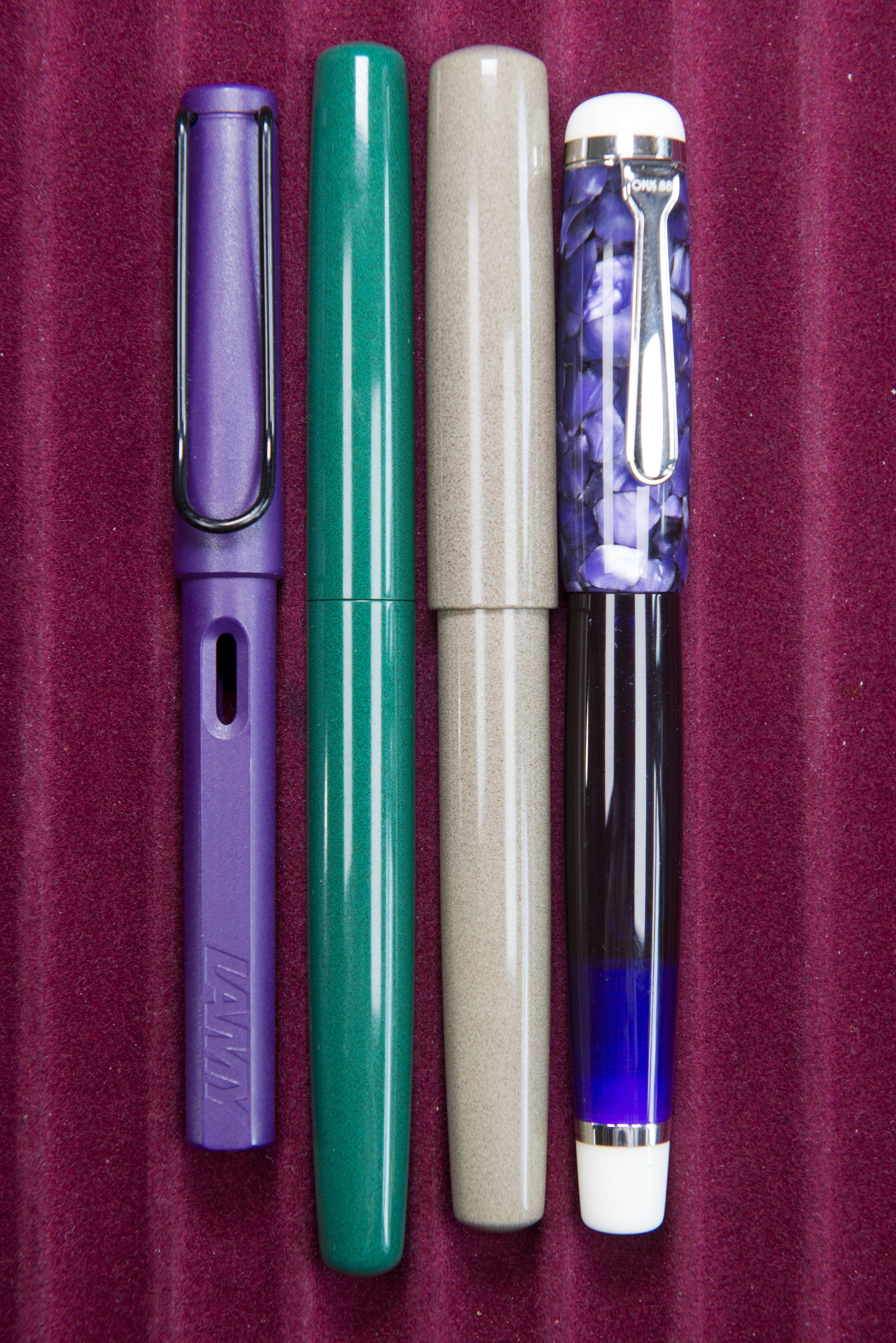 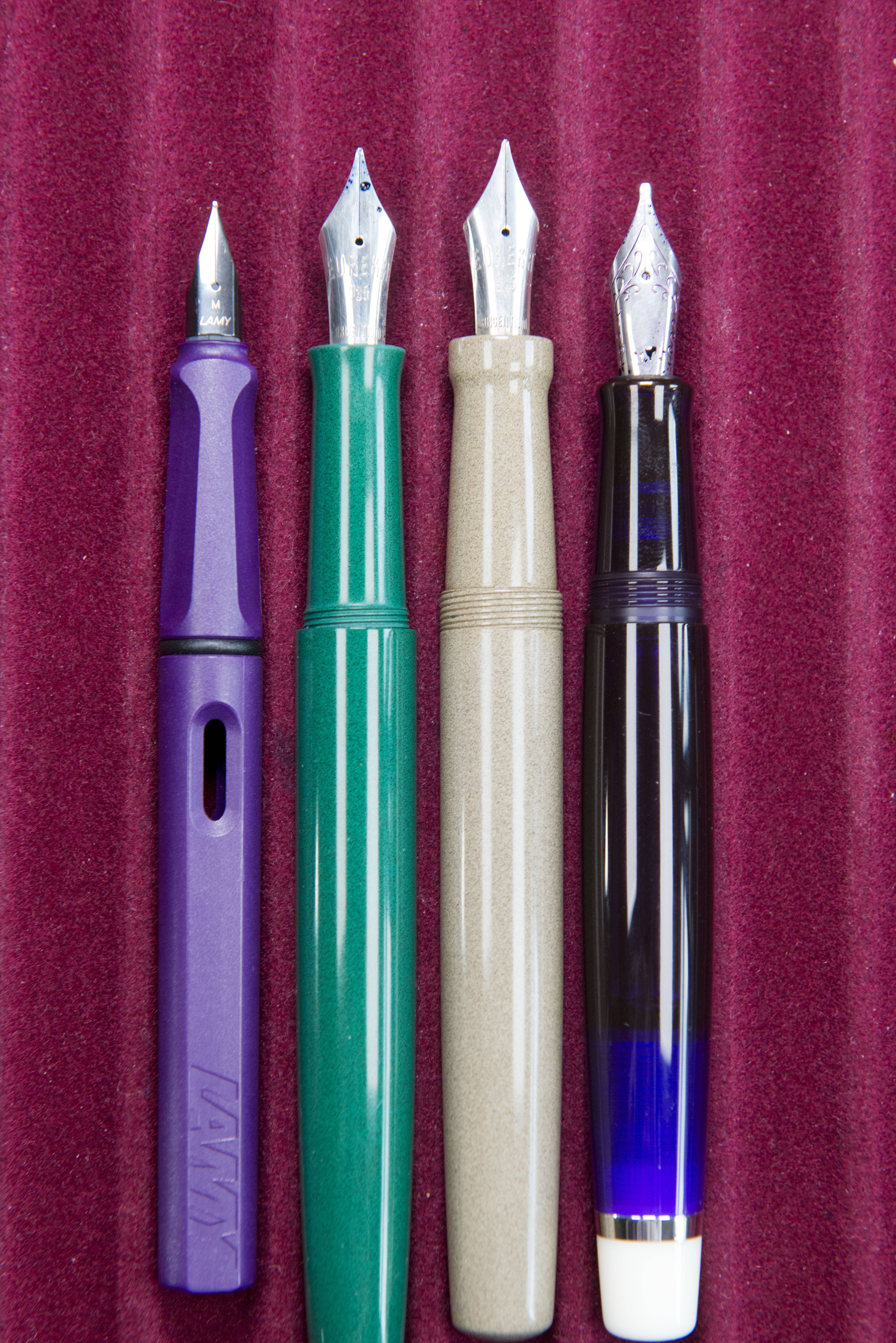 Writing sample – note as well as the usual few lines on Rhodia paper, which was done ‘as is’, so no fixing skips, I’ve also included some writing I did on 80 gms Oxford Optik. 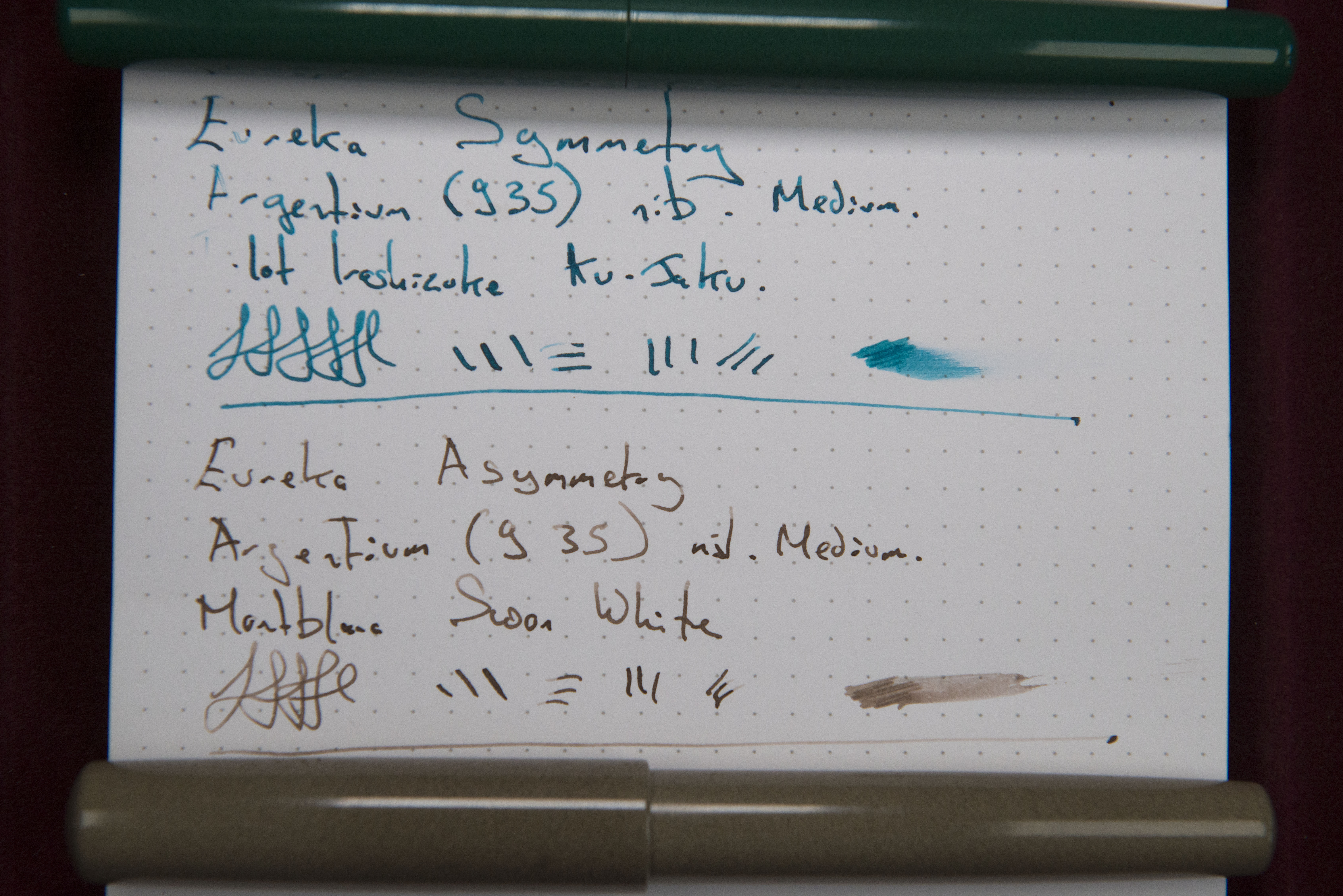 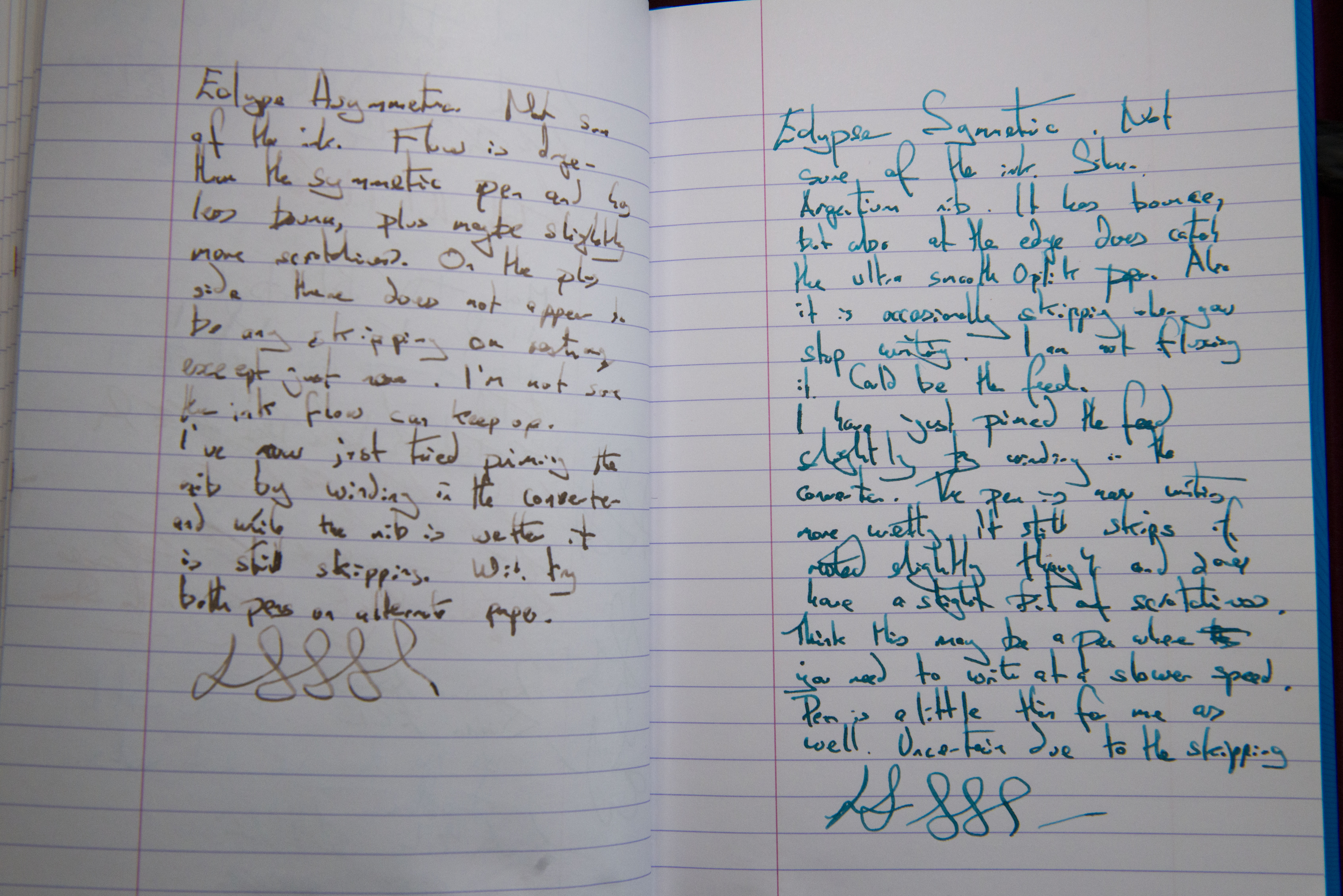 So in summation, these are early days pens, which while flawed still show many positives.  I feel with experience, the quality of the nibs will improve and become more consistent (at least I hope so).  The Eureka R&D and design development pages show the work being put in to perfecting these pens and I feel this is certainly a manufacturer to watch, though I personally might hold off a while for nib production standards to improve (which I’m certain they will – hopefully newer production pens will be reviewed online by others for our information).

I have to thank Anthony/Eciton for lending me these pens to try.  His review is obviously worth reading if you’ve not already done so (link near the top of this review) and it should also be noted he did not have the same ink flow problems I did – we’ve noticed this difference in the past and suspect it is part down to difference in writing style (he’s a left hooker) and my being gentler on the nib.

For those not able to see the creator’s background/overview on FPN, this was his first post, and also is in his profile:

Greetings, visitors of my profile.
You are warmly welcomed here.

2~3 years have passed, and I have created 90% of the vital machines on my own.
now i make :
ebonite barrel & cap & grip, sophisticated ebonite feed, and argentium & 14K~18K gold nibs

The adventure is still going.
Next is realization of 4th Gen. Urushi technique.
The Urushi coating will be not only affordable, but also absolutely perfect.
afterwards, I will start mastering Na-Jeon, Maki-e, inlaying, etc. urushi related techniques.

I am currently working on “large capacity reusable cartridge”
All the while, working on the manufacturing process for my own “!” shaped clip (Eureka!).

when all the above is complete, I will move onto even more advanced techniques for embellishing the pen.

My passion for fountainpens has not haltered a bit since the beginning.
I work alone, and all the parts in my pen (except the ink converter) are made by me.
All the designs and manufacturing of my pen making machines and my fountainpens were done alone.

It was a lonely battle, all along.
Although it was painful, it wasn’t painful.
My passion for fountainpen making will not stop.

feel free to leave comments in my posts.