When is a Visconti Homosapiens not a homosapiens.  When it does not have the twin rings on the cap and when the body is not rounded.  The Medici is a faceted pen with 8 sides in a bronze/brown coloured, swirling, sparkly resin, which at the time came with palladium trimmings.  In more recent times, with the introduction of two other colours of pens, the trimming for this version changed to rose gold coloured.

So how similar is the Medici to the Homosapiens.  Well the classic version of the latter came in resin which was made partly from the basalt rock from Mount Etna, where as this uses an acrylic based material.  Both use the same 23k palladium nib, the Visconti ‘Power Vac’ system, and the hook lock system used to secure the cap. 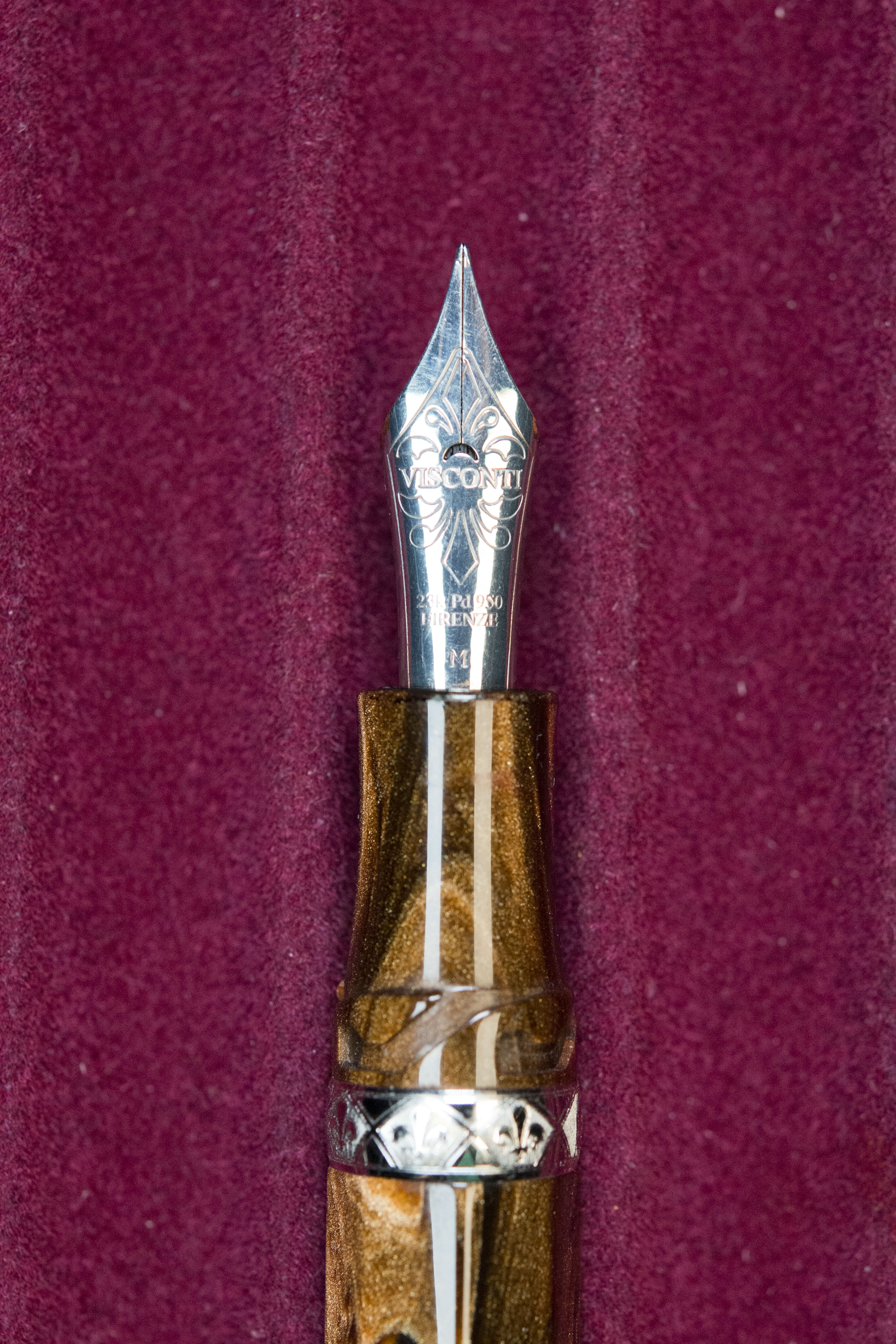 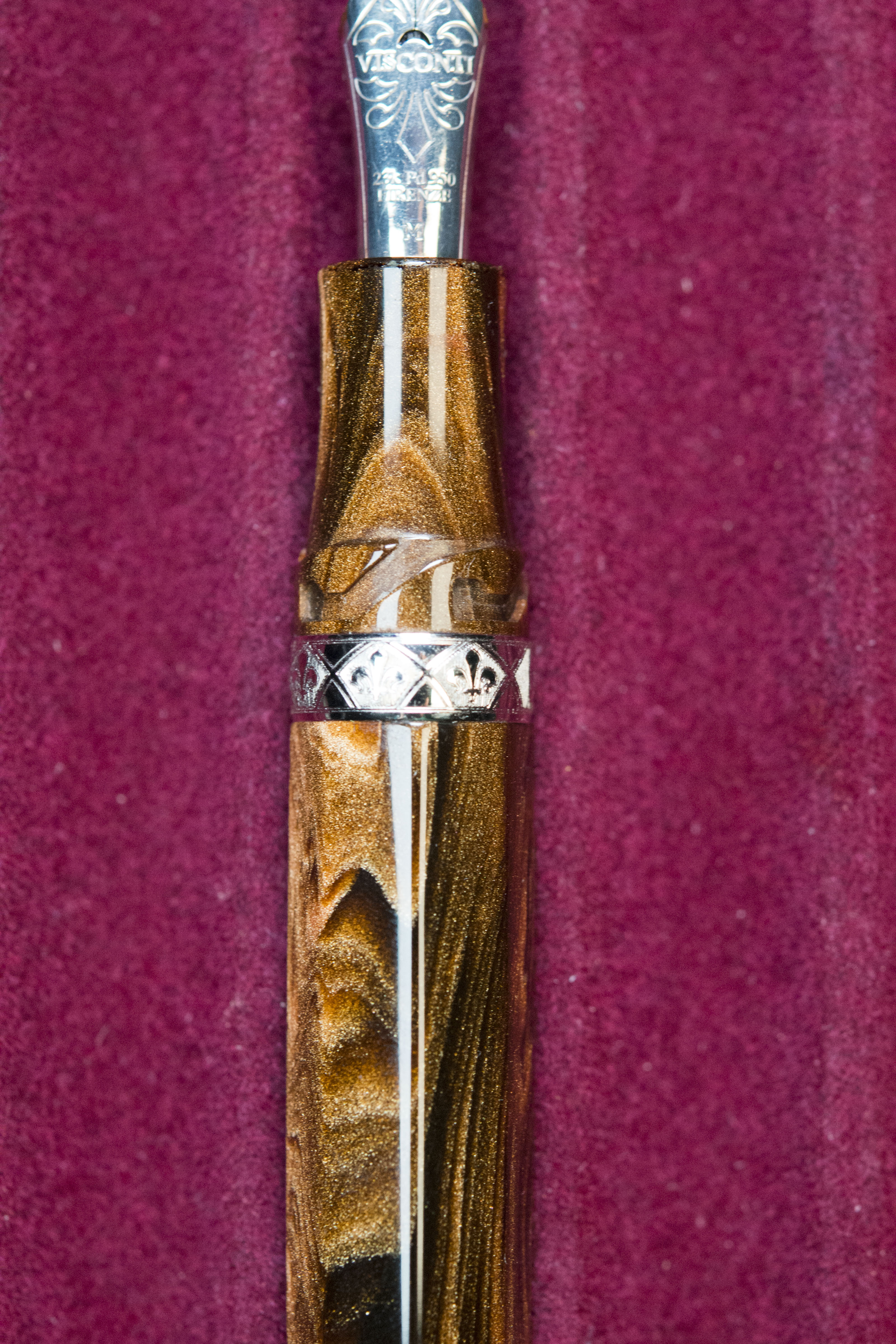 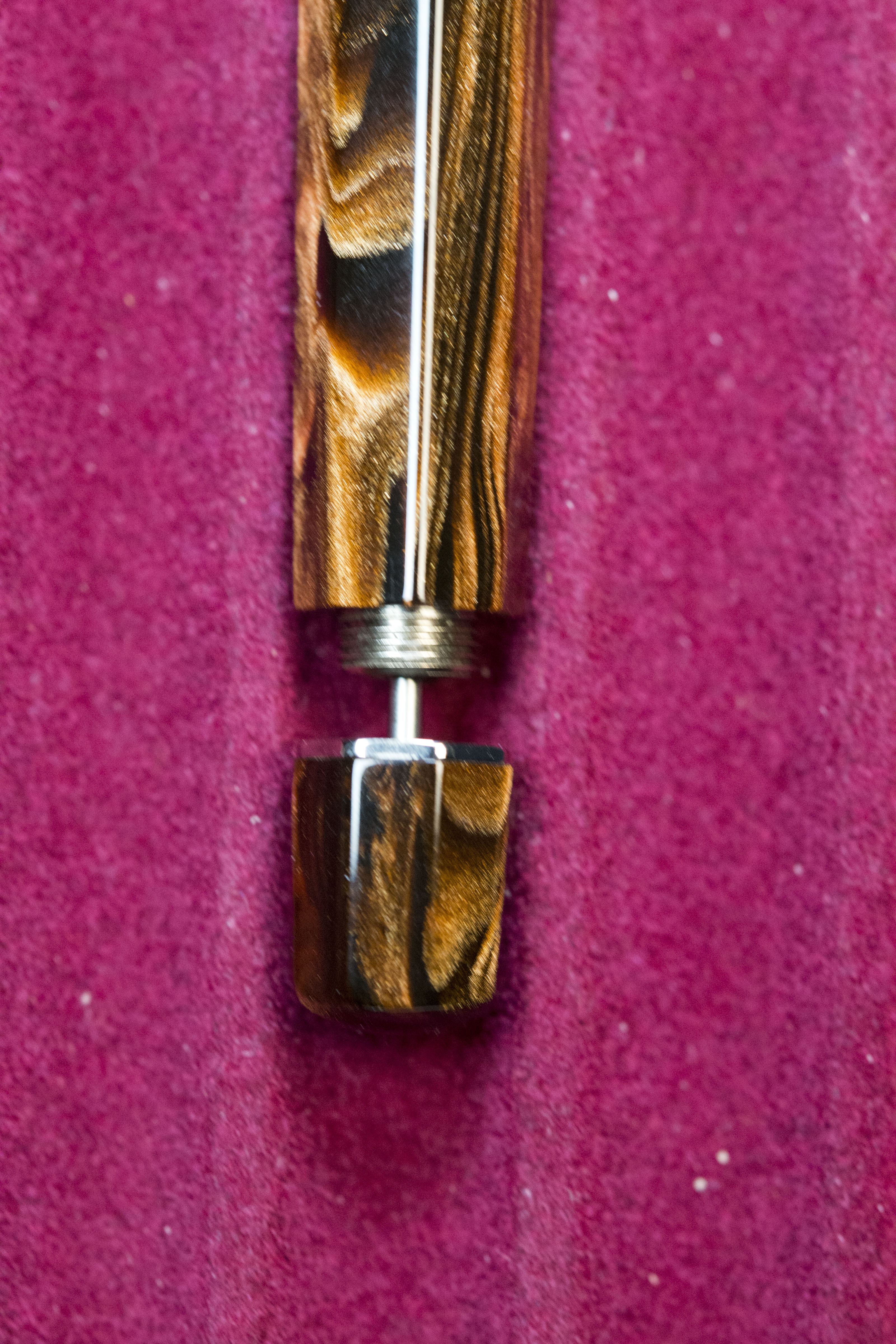 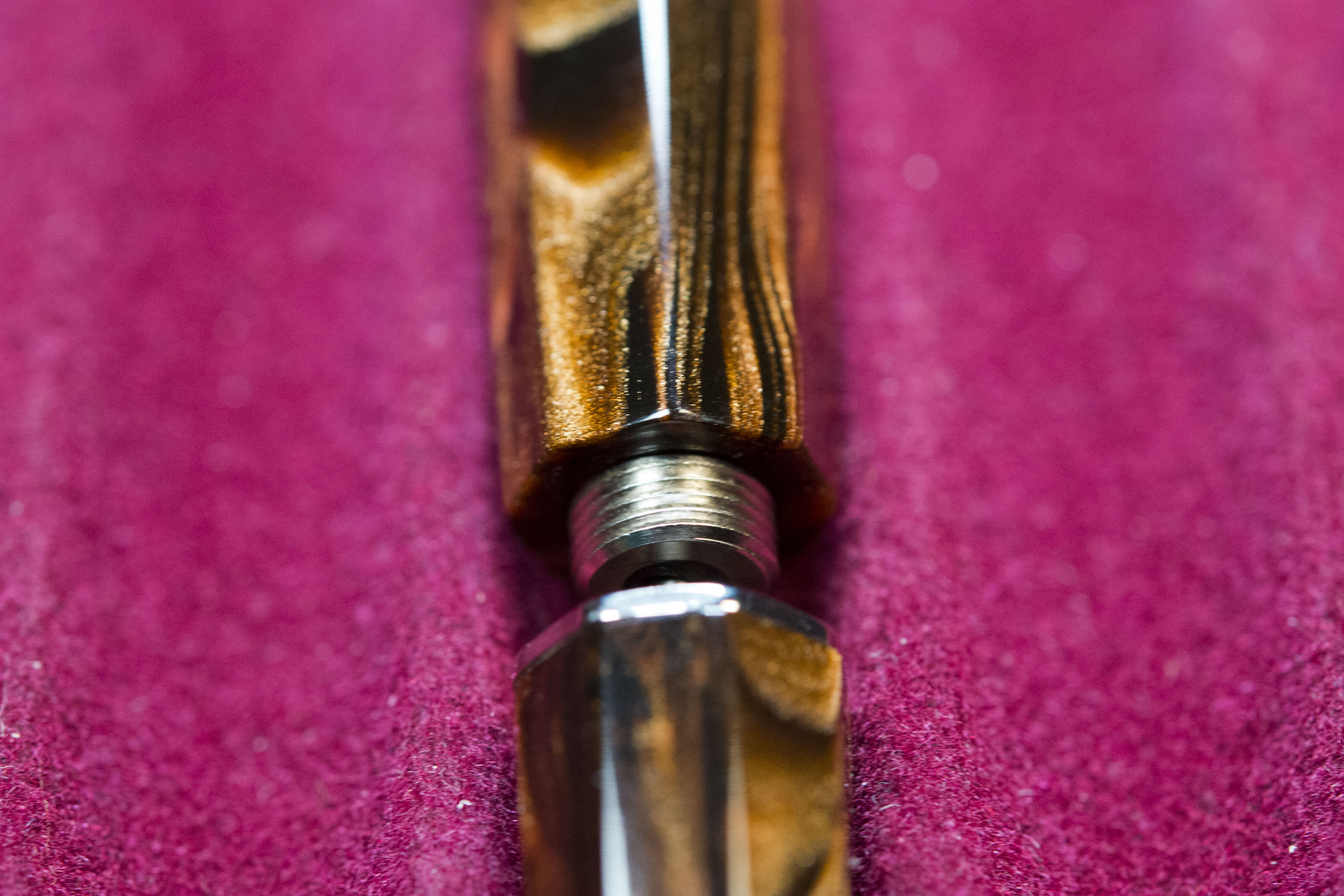 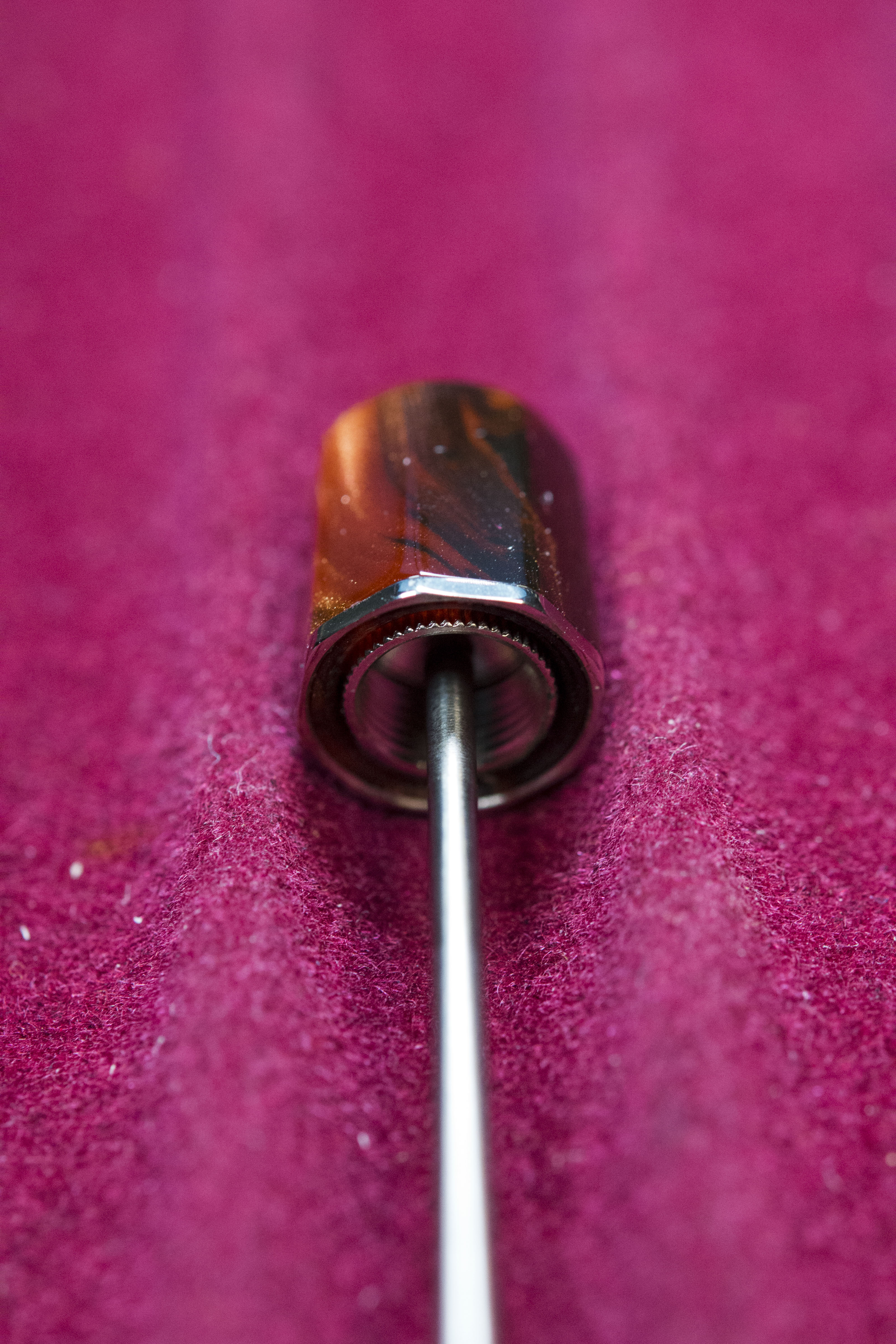 The material itself is what makes this pen interesting.  It is a creation of Visconti called Acrosilk, which is a compound of an acrylic resin and silk fibres.  This helps produce a finish which combines both depth and chatoyance, along with sparkles through out.  The concentration of these affect the colour, where higher concentrations of sparkles result in a light metallic bronze colouration, where as a lack of them produces almost a deep dark brown wood.  It is this finish which makes the pen for me.  Holds my gaze from time to time, and becomes an object of art and fascination as I rotate the pen in my hands.

So is this a good pen?  well it depends.  The balance and writing experience is the same as most oversized homosapiens.  The feel of the material may differ, but the grip is rounded and in reality you won’t notice the facets in the hand as the hooks are soft.  The nib is the stock standard Visconti 23k palladium unit produced for them by Bock.  Both my pens have been reliable and the nib is wet and springy, though at the same time I’d have to say does not come close for writing pleasure to the gold nibs of OMAS, ScriBo, and Graf von Faber Castell.  Putting aside the hype Visconti spun, when they moved to palladium it was half the cost of gold and this would have reflected the per unit cost.  Over time the cost differences have reduced and now palladium is actually more expensive, so it can not be by accident that Visconti have moved back to gold – I suspect they finally ran out of the last batch of the palladium nibs that had been made for them from when the material was cheaper.  The clip is sprung and shaped like the Ponte Vecchio.   Unlike on many of Visconti’s other pens, the writing is not raised with enamel filling the gap to the edge.  Here it looks like the letters have been smoothed out of a rough surface.  Looking closely I can see no relief, though the background does infer a surface roughening.  I like it.  The clip is easy to use and does work well. 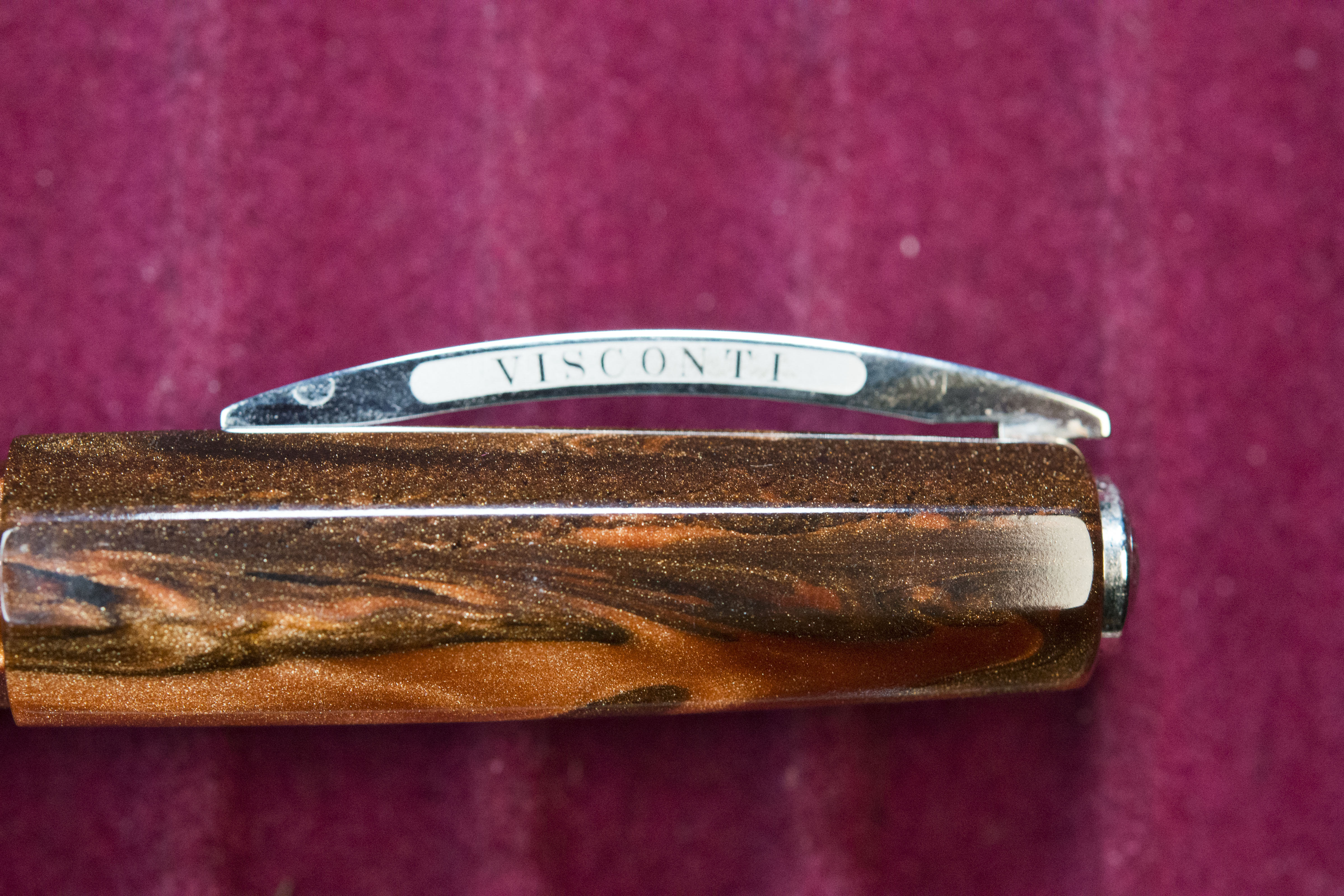 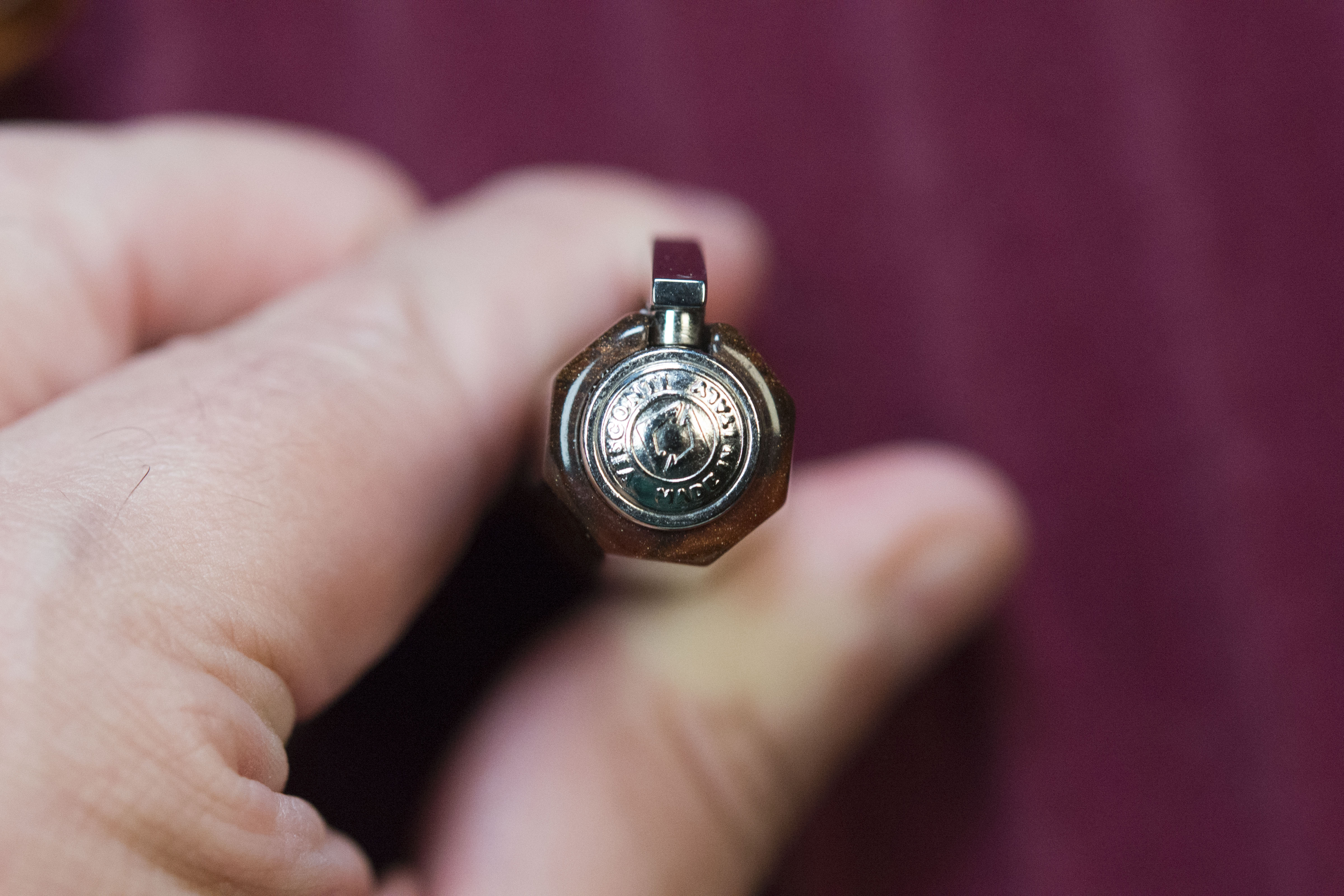 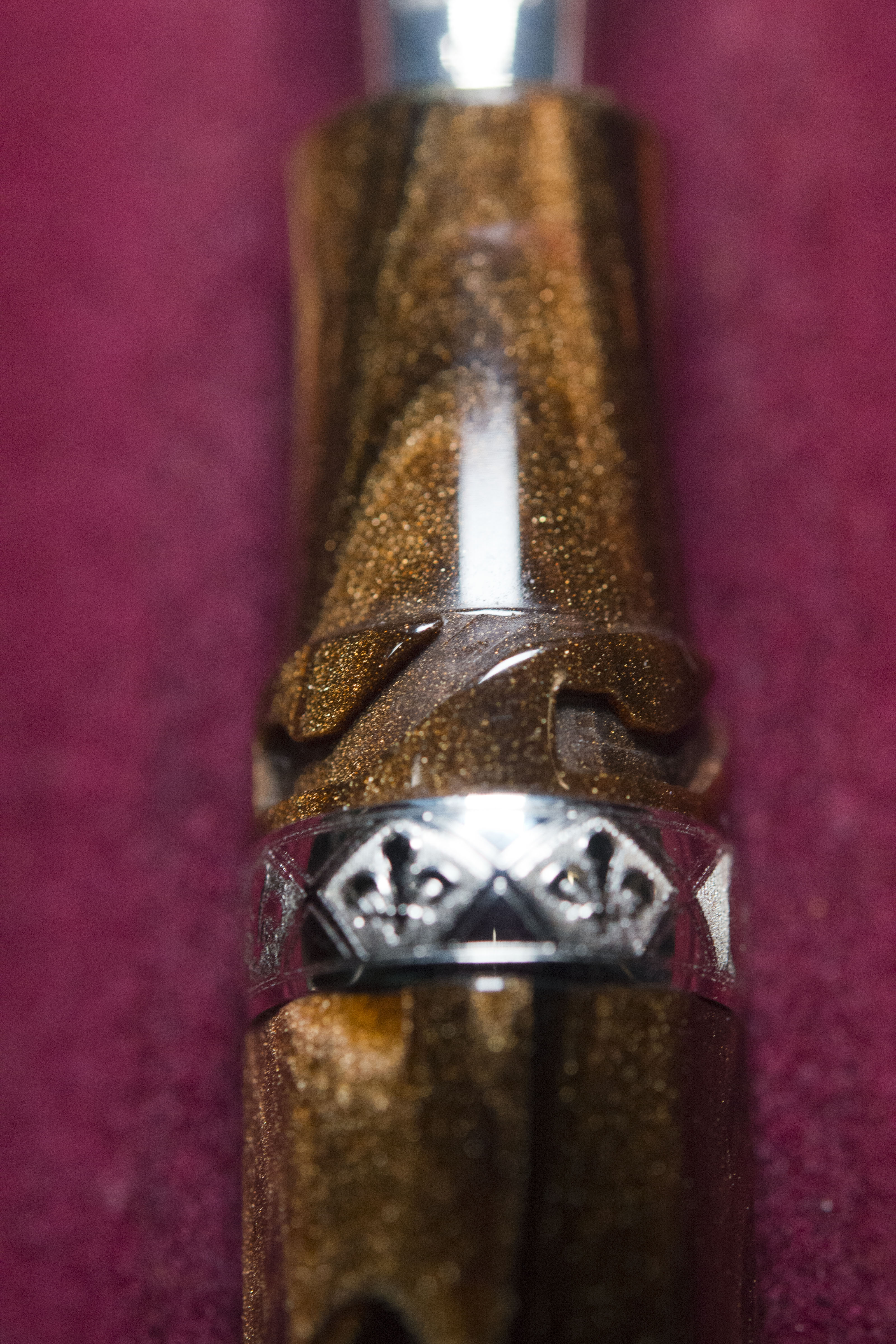 There are downsides as well this pen shares with the original (*-age) homosapiens.  There’s no ink window, so no way of knowing how full the pen is.  The filling mechanism is inconstant and I have had a few near empty fills.  Additionally, the shut off valve is not air tight, and while it does prevent ink seepage, leave the pen for a couple of weeks and it completely dries out.  My Bronze Age is better in this respect, but it still dries out after 1-2 months (unlike my 823s if not used).  The hook lock system may make taking the cap on and off a quick and easy process, but it is not secure.  There are now a number of times I’ve clipped the pen on the inner pocket of a jacket, put the jacket down, and the pressure of the the barrel temporarily resting on the seat of my car has been enough to open the pen and the barrel drop out of the cap on lifting the jacket back up.  It is not a good design, and is an example of a solution where there is no problem and a problematic solution at that.  Additionally I’ve noticed a little wear on catch part of the mechanism on the Medici (not on the Bronze Age), which does indicate if I were to use this pen more often than I do then there would be the risk of the hook lock mechanism wearing too far.

What does sum this pen up is I have sold my Homosapiens Bronze Age (will be passed to the new owner in about a week), where as I have no intentions of getting rid of the Medici, even if kept mainly as an object of beauty. 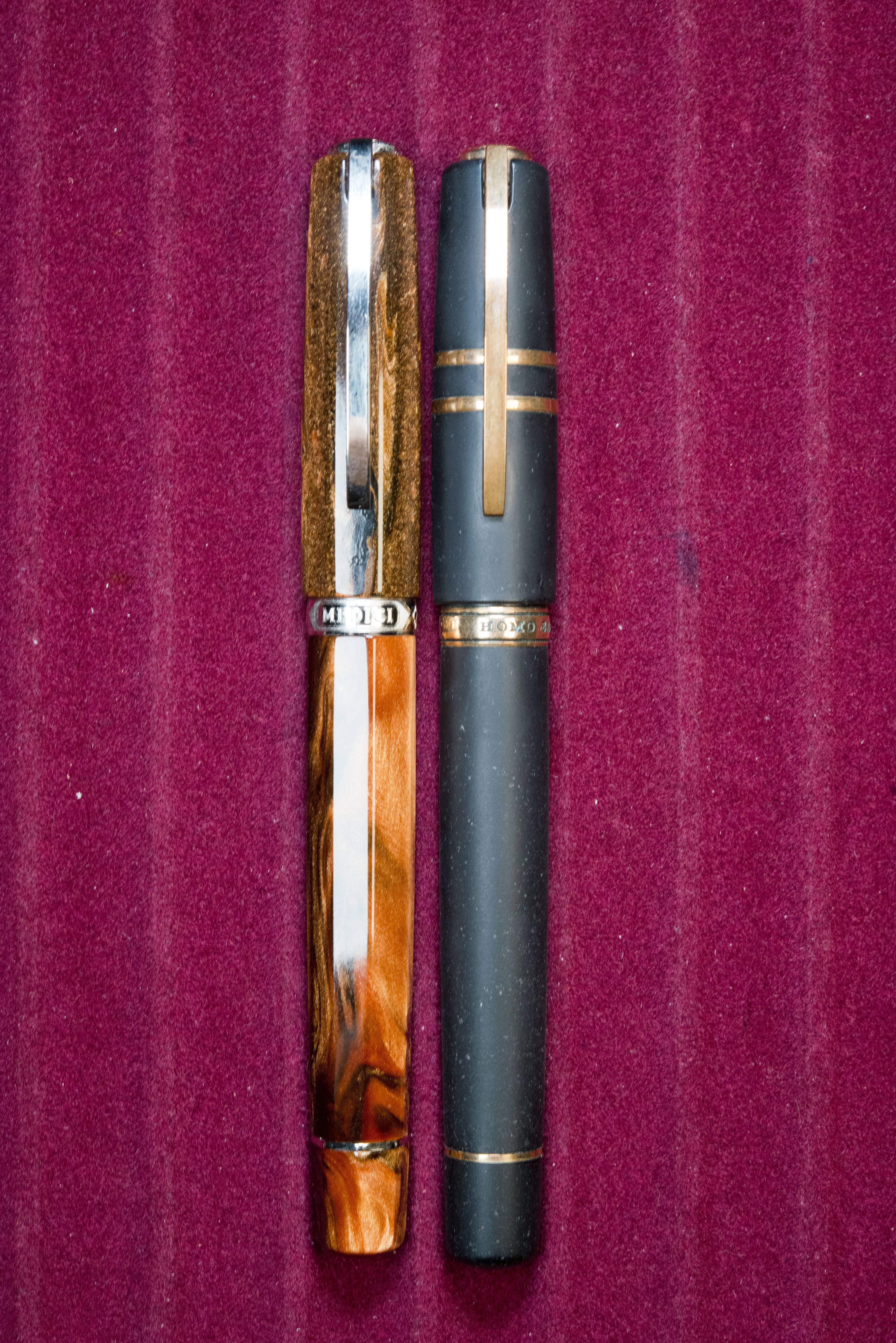 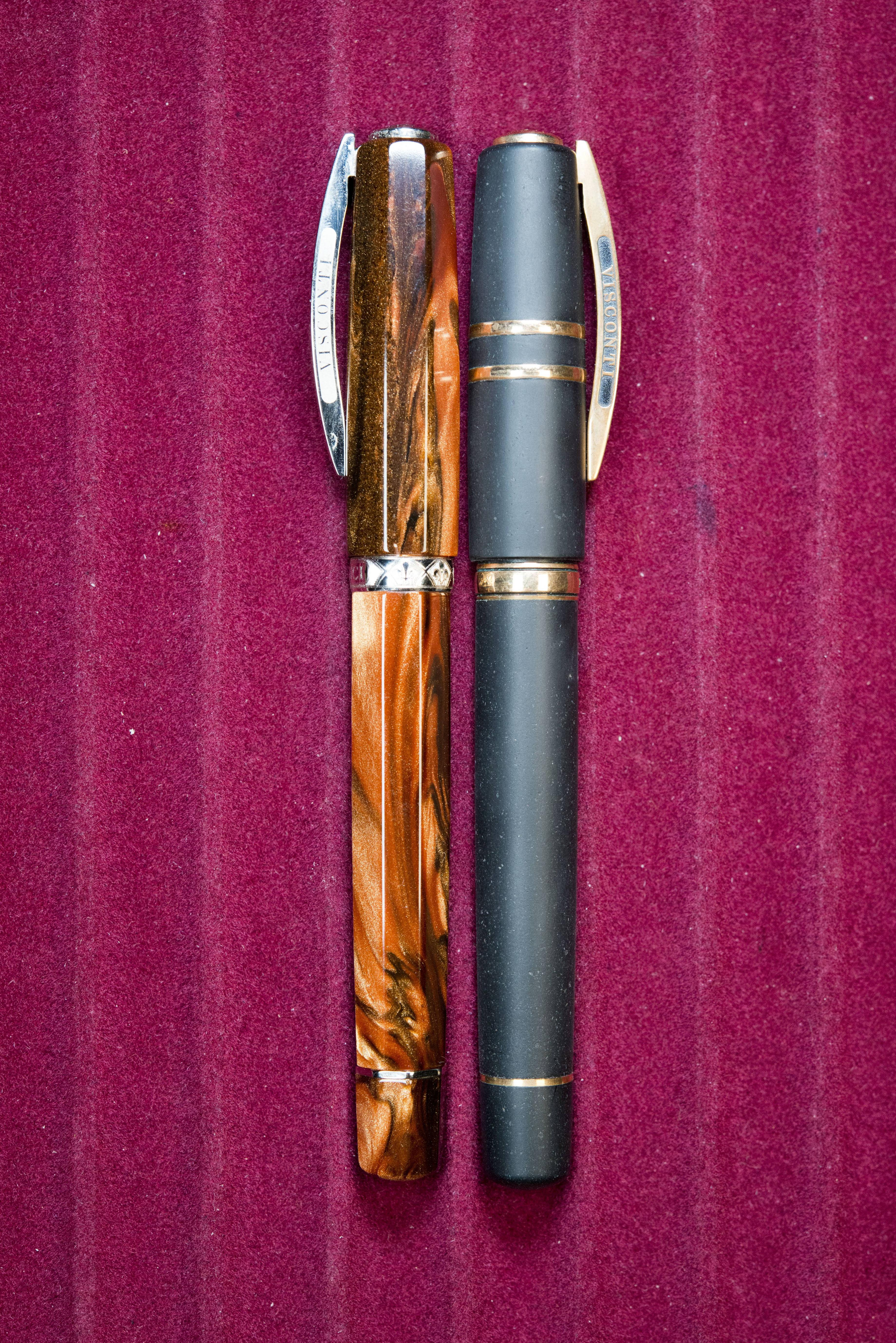 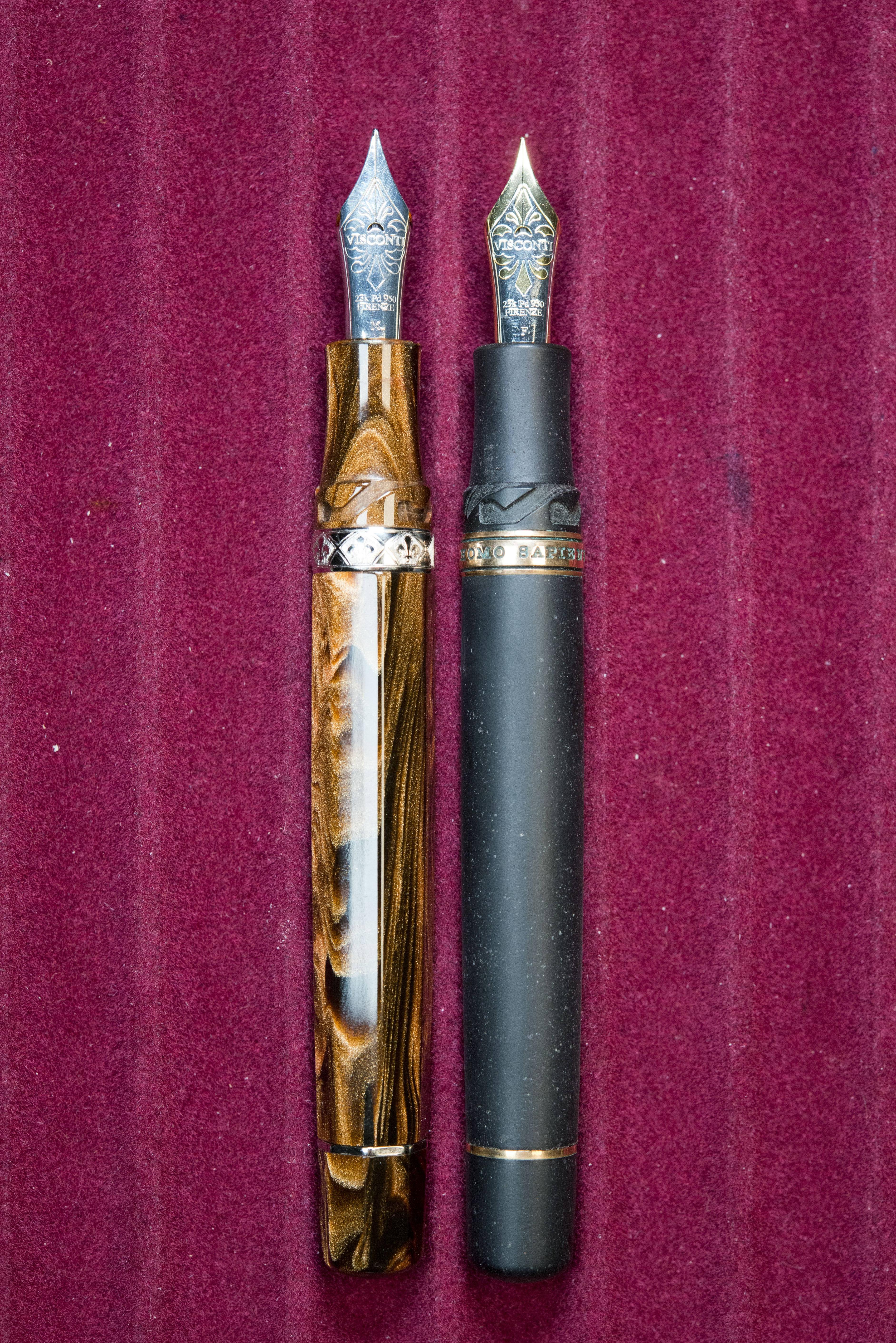 Here are some size comparison pictures with the ubiquitous Lamy Safari/Al-Star/Vista/LX.  Note the cap will post securely, but there should be little need with its size, in addition to which it does back weight the pen. 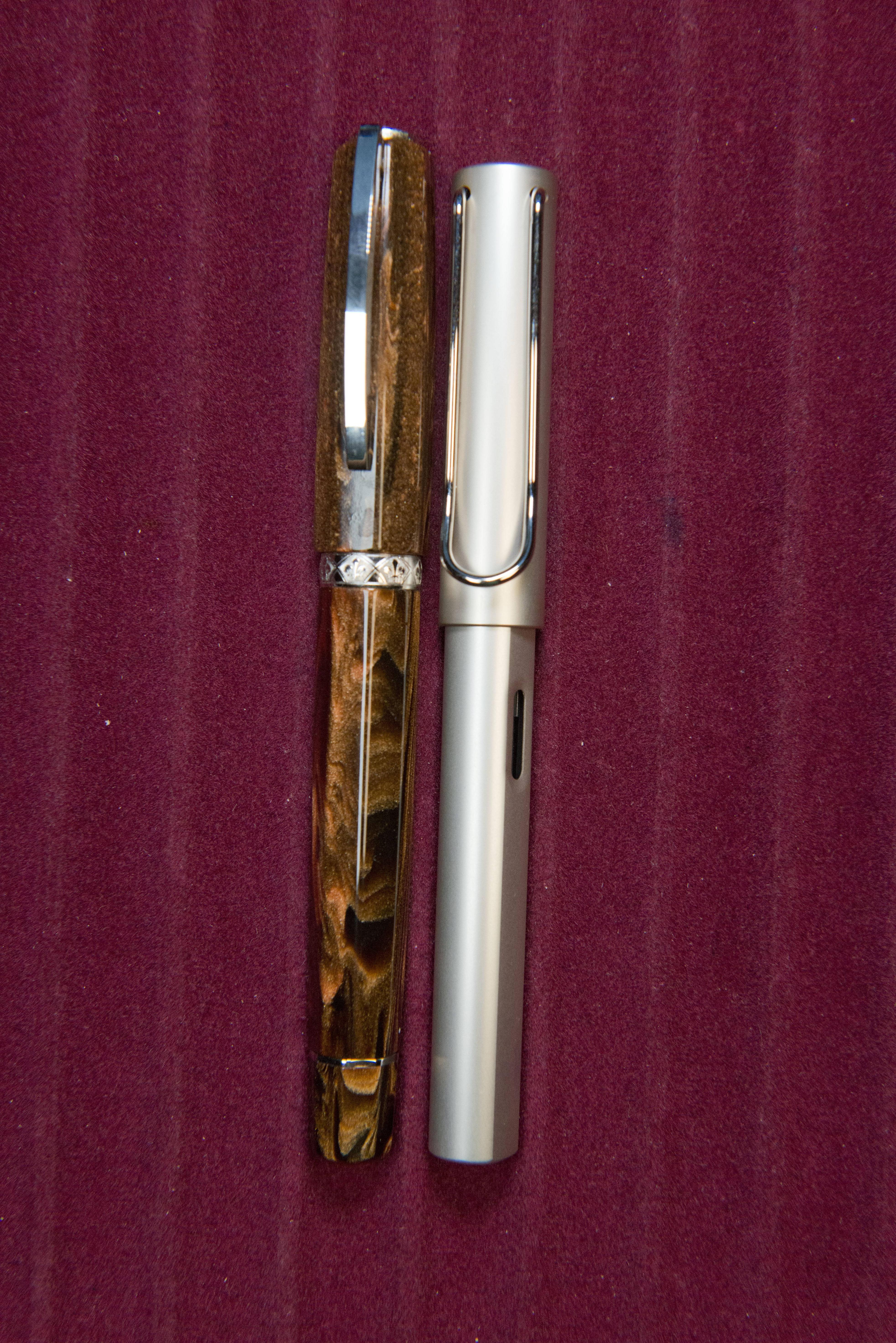 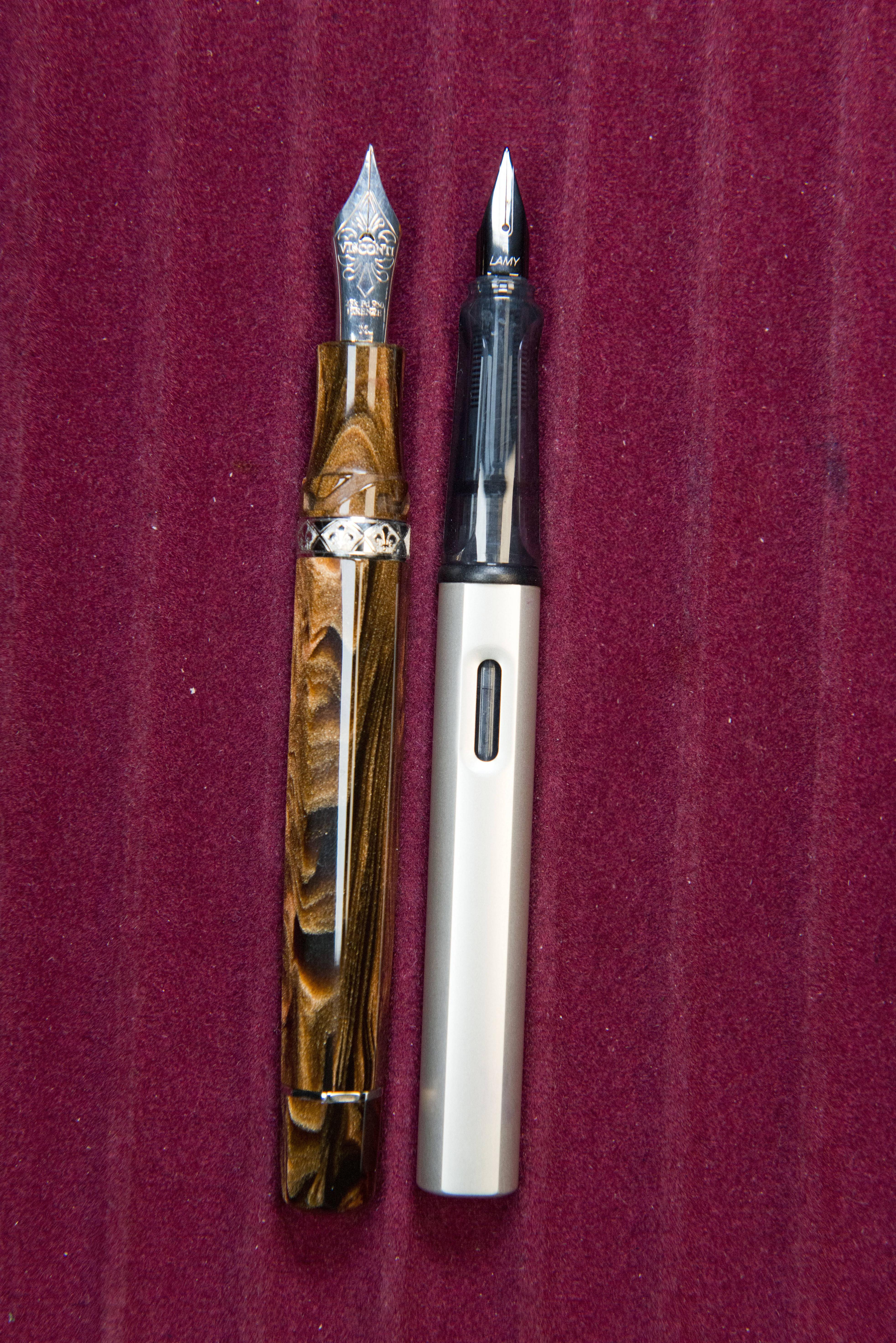 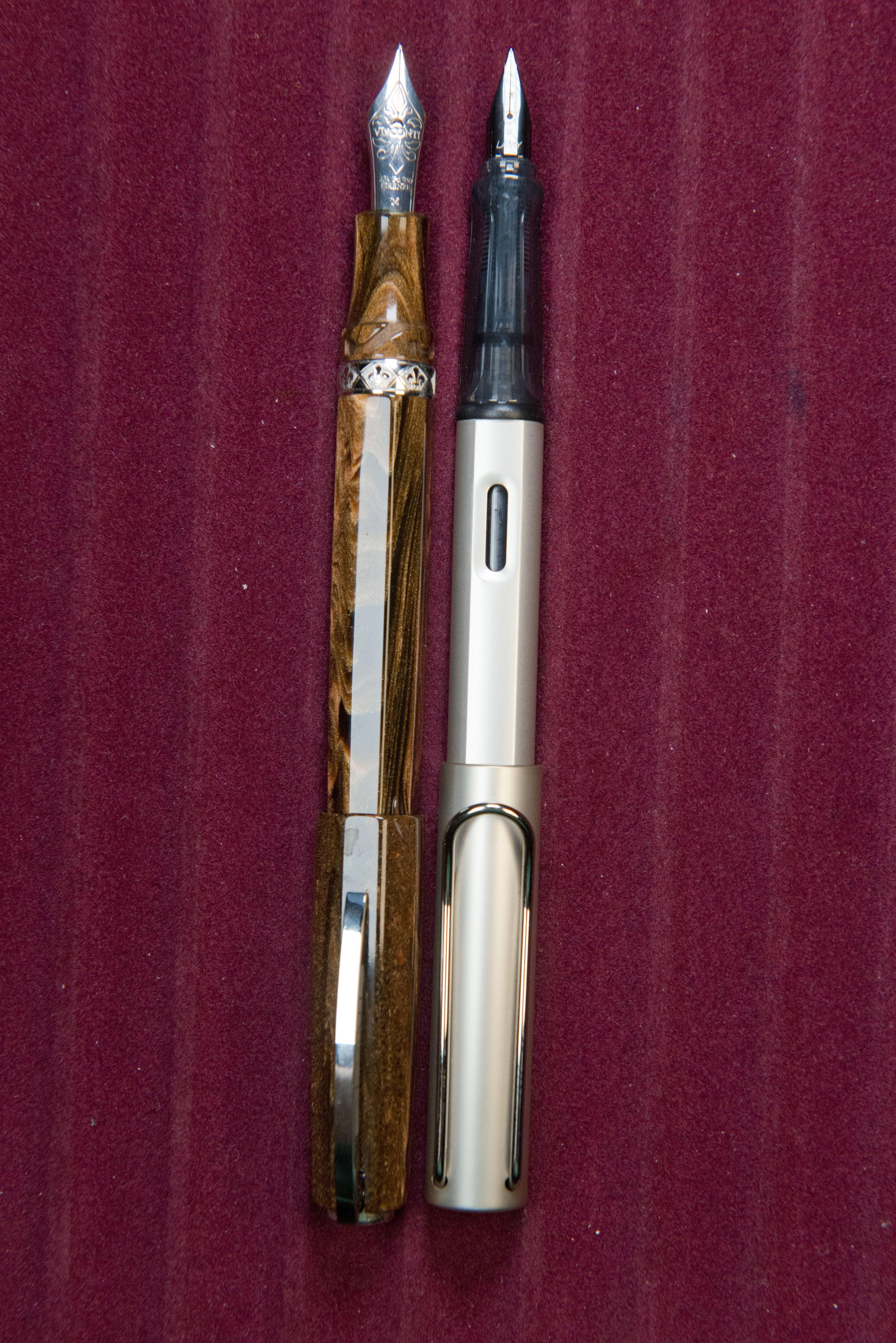 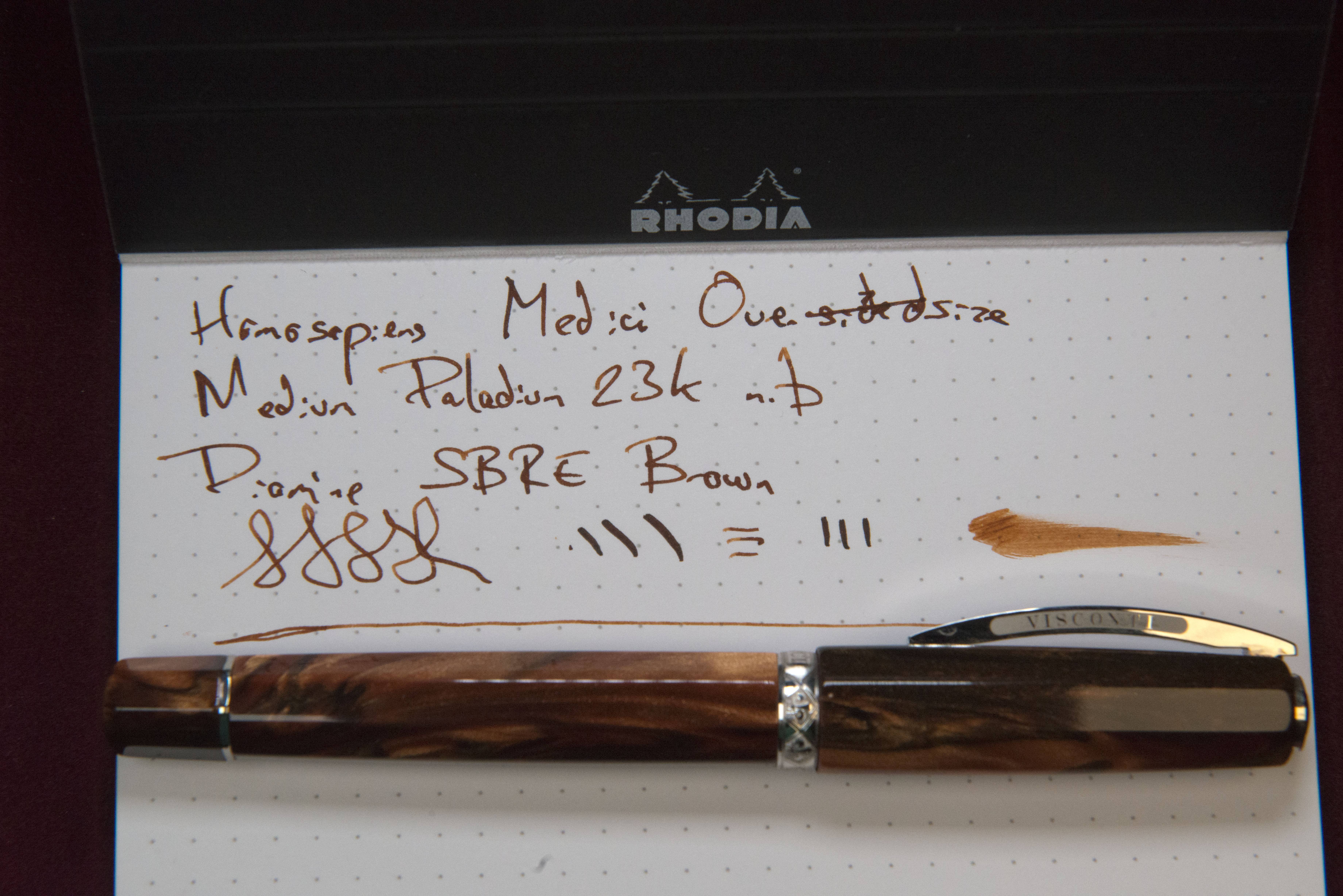 Note I bought my pen second hand from another member of a local pen club.  At that time it was hardly used as it was a second Medici pen in his collection.  I’ve kept the ink fill the same, with Diamine SBRE Brown.