Flex is cool, flex is fun, flex will win you the boy/girl/goat of your dreams.  Flex is hyped yet many of us still buy pens with flex or semi-flex nibs and enjoy the experience.  For me, it’s not the challenge of modern or classical styles of formal writing (such as Spencerian or Copper Plate), but the springy nature of the nibs, for in all honesty I’m one of the last people you want to come to for place setting cards or party invite creation.

Pilot have been very good to their user base when it comes to flexible nibs, or by their designation FA and Falcon.  Primarily these are really designed for Japanese or Oriental styles of calligraphy, however work just as well for Western styles as long as the writing is paced.

One thing to state, before I get properly started.  The FA and falcon nibs are not the same.  The falcon nib only comes on the Falcon pen and has a slightly ‘beaked appearance, which helps with it’s flexing.  Size wise it might be slightly smaller than the Pilot size #10 nib on the 912.  The FA nib is a more traditional design, being flat along the top, with the difference being a cut out on either side, just behind the widest part of the nib. 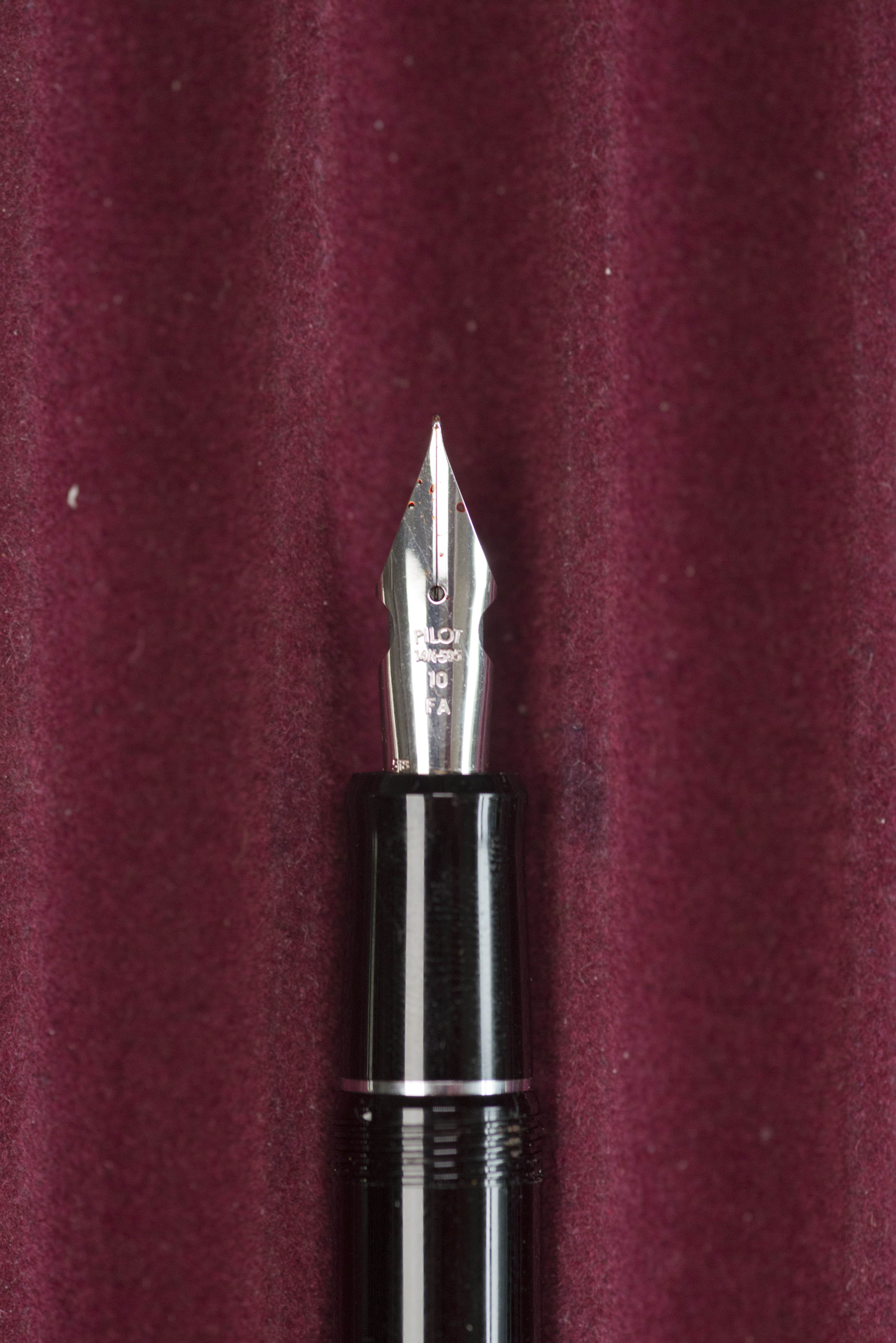 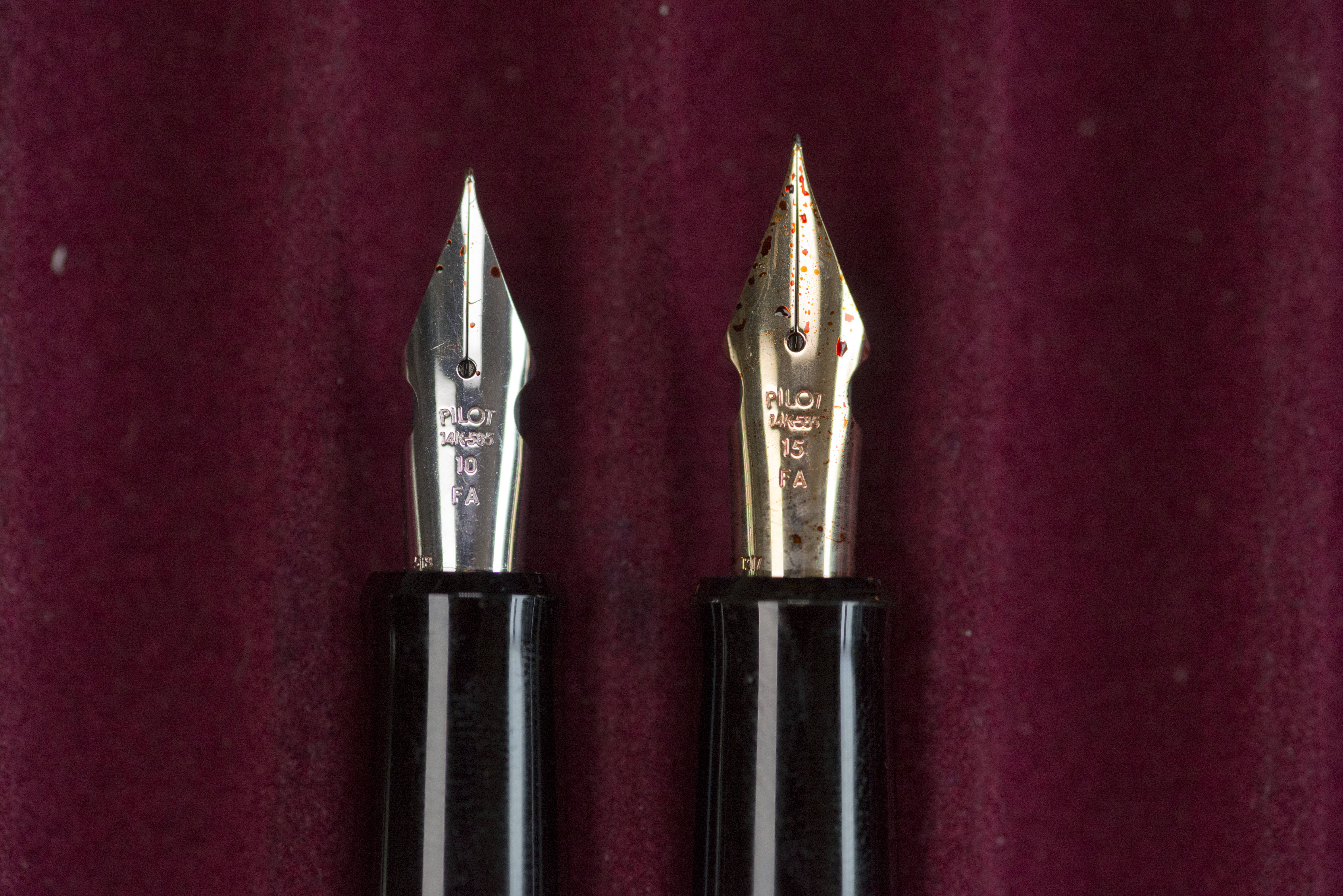 The 912 is a solid, workhorse pen which comes with a gold nib as standard (Pilot size #10 – very slightly smaller than a JoWo/Bock size #6).  It’s of a medium size and made of a strong resin.  Compared to a Pilot Custom 823 it is slightly shorter and has flat ended finials rather than the more traditional cigar shape.  In many respects it is the flat ended equivalent to the 742, being the same length and the same nib size (in the same way the 823 and 743 are of similar dimensions and both have the size #15 nib).  One way of thinking about the shape is that the 912/742 are to Pilot what the 1911 Pro Gear/Profit are to Sailor.  Dimension comparisons can be found on this very useful blog, complete with pictures.  Like with the 742 and 743 this pen uses a cartridge or converter, coming with a Con-70.  One thing I found interesting, when looking at this pen and one of my 823s along side was that the grip section appears to be identical in both size and material (aside from internals) despite the different nib sizes. 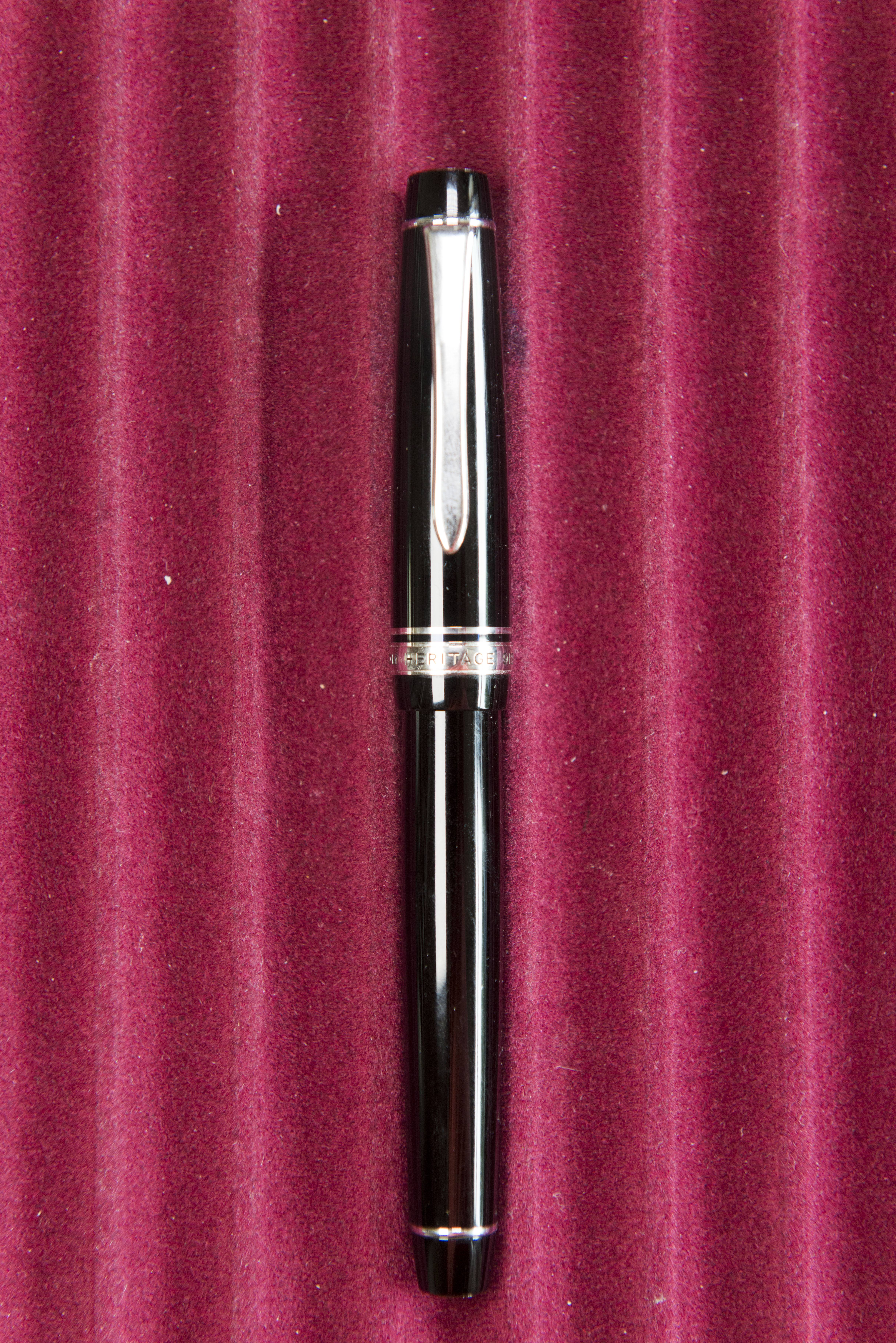 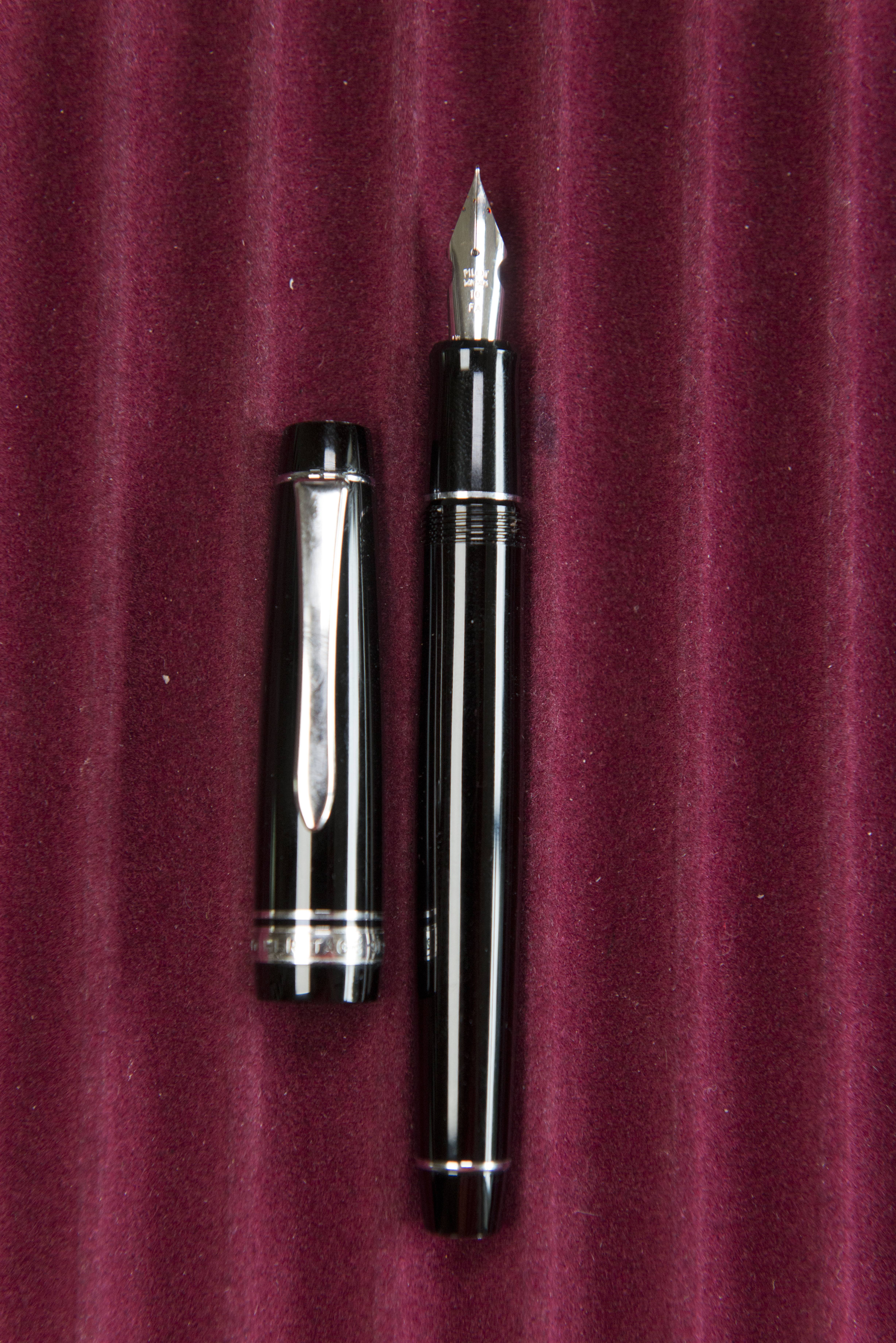 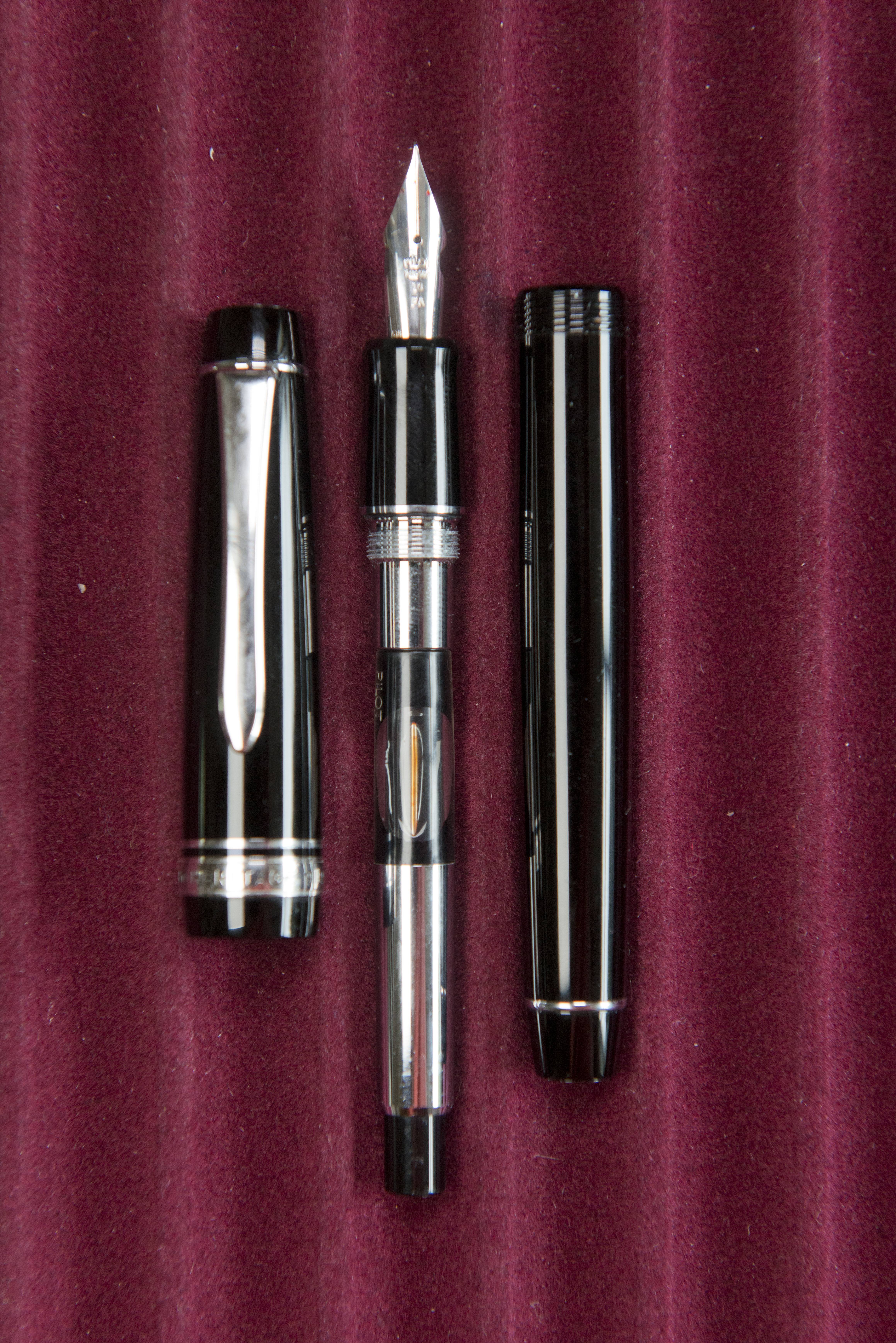 The pen itself is smart in appearance, though nothing remarkable.  The black resin feels solid is paired nicely by the rhodium plated fittings.  There is a simple thin ring by the finials at each end.  The cap also has Pilot’s traditional double rings towards it’s base, the lower of which is wider and stamped with Pilot Japan on one side and Custom Heritage 912 on the other.  The clip is sprung steel held in by the top finial ring, however unlike with many of the other Pilot models, rather and a ball at the end of a narrowing clip with Pilot marked on it, here we have a more generic, and unmarked tie shape, with a nub underneath the end to help keep the pen secure in a pocket.  It works well. 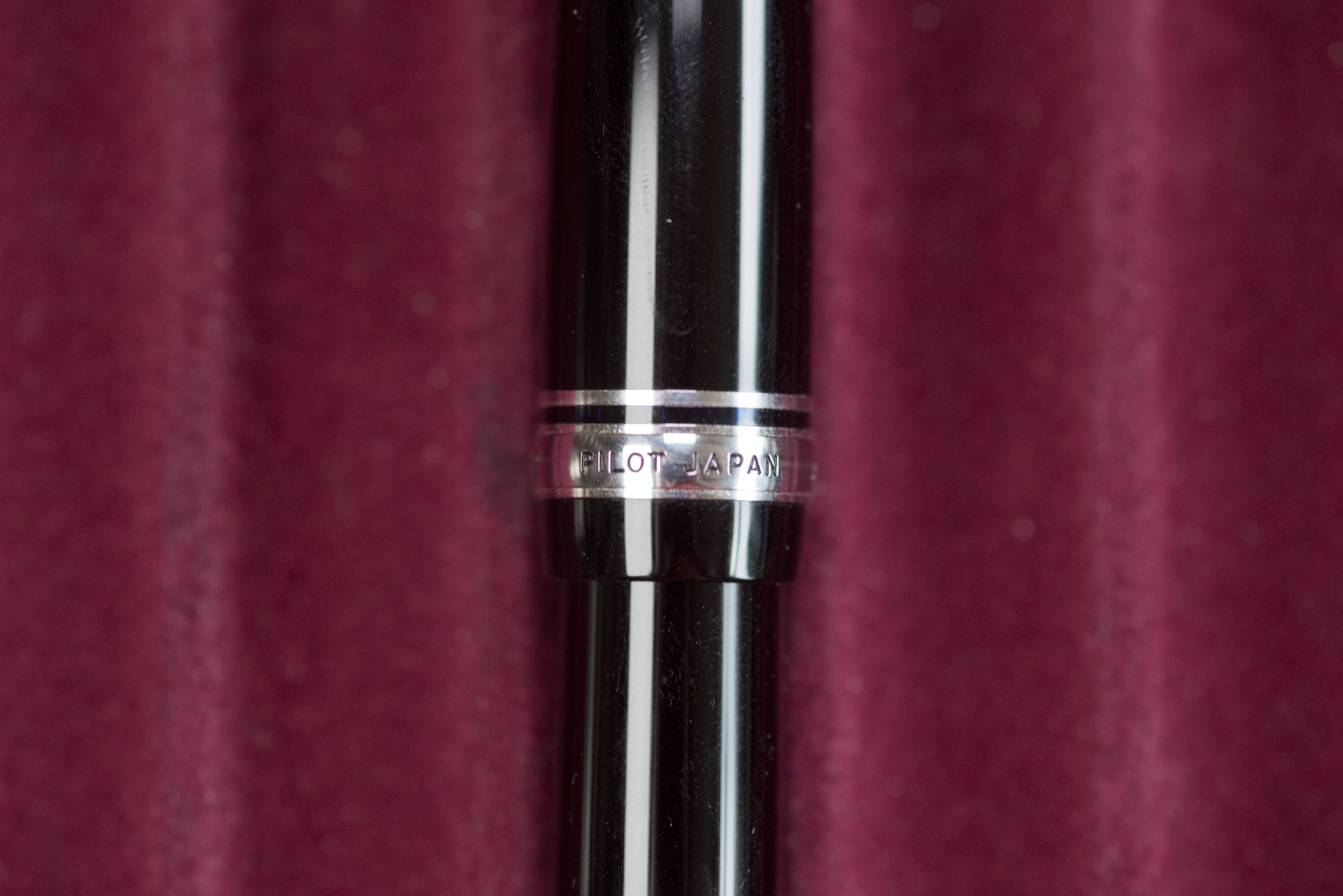 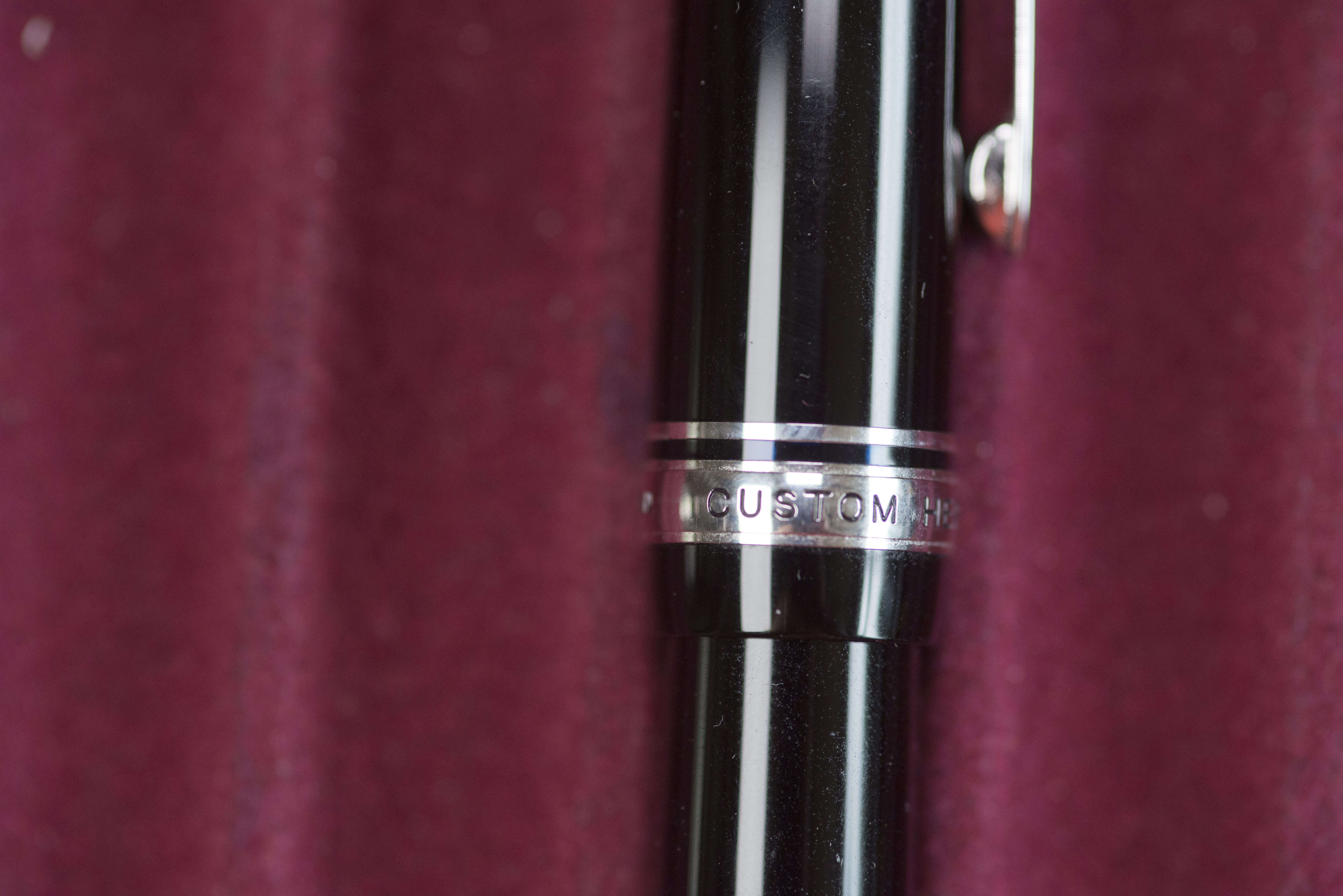 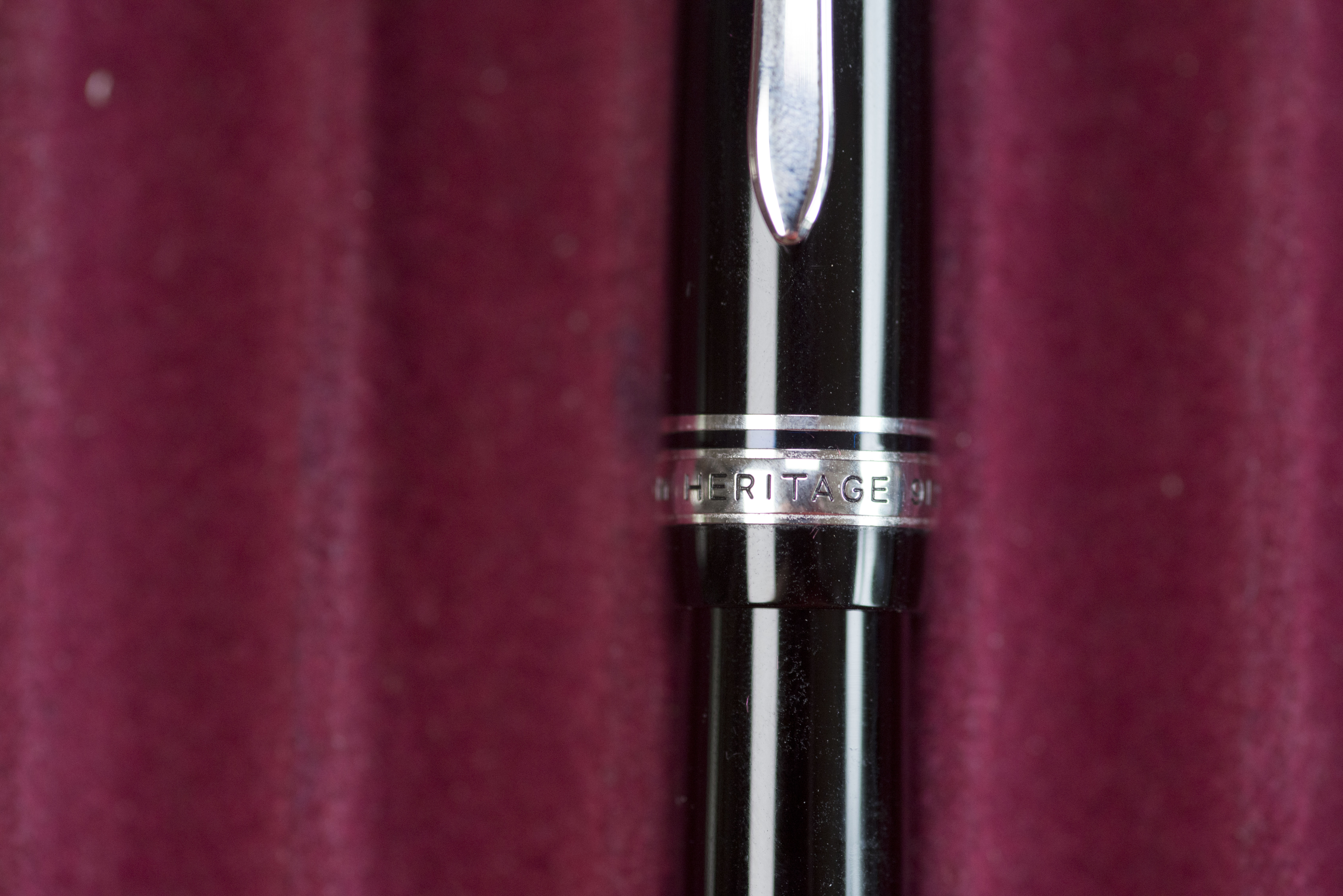 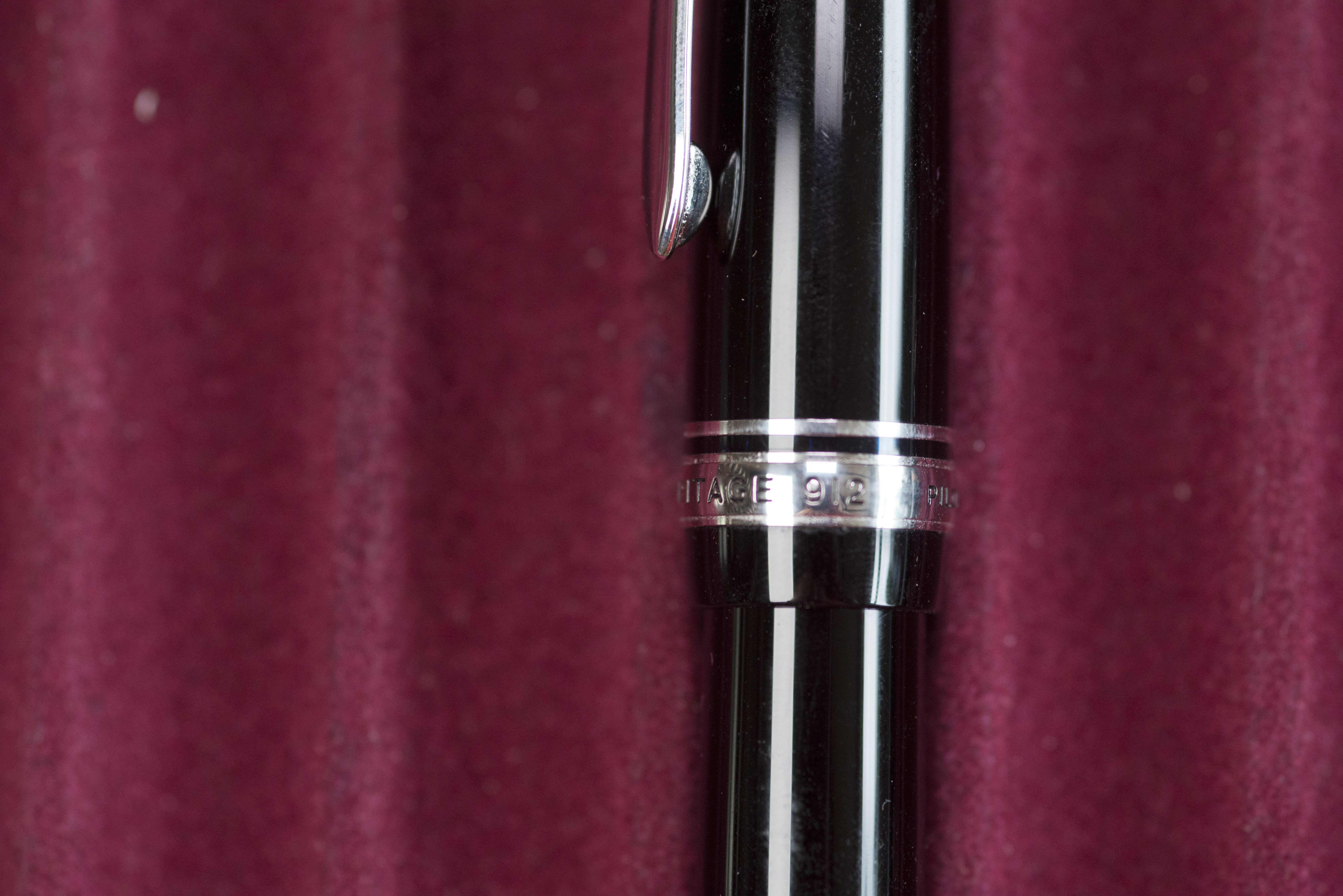 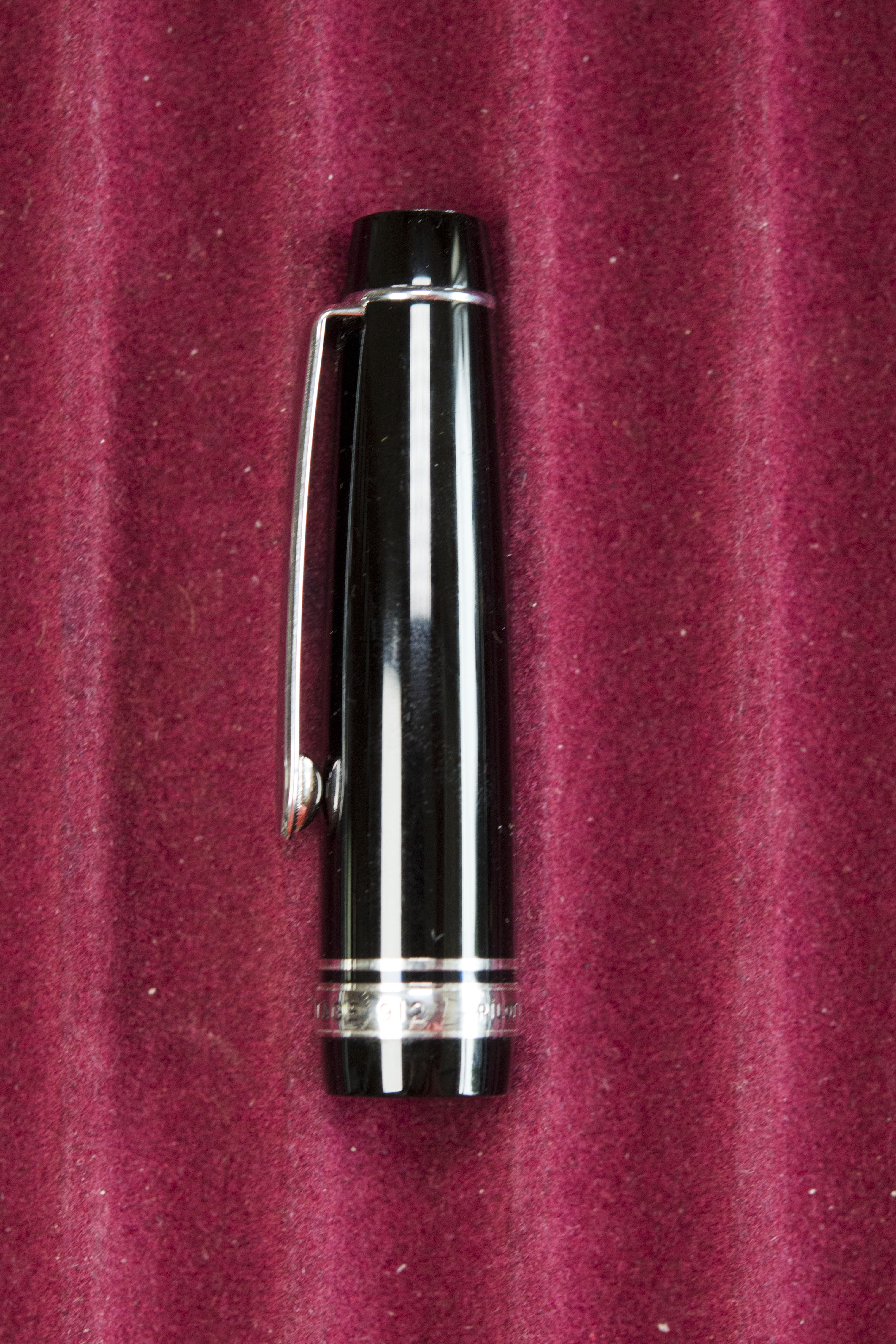 Removing the cap (about a turn and a half) and the stock Pilot grip section can be seen with a metal ring at the end, just before the capping threads.  The barrel tapers out very slightly, and then inwards by a similar amount.  It is visible, though subtle, and the curved line does merge in the with main stretch of the grip, making the pen very comfortable to hold.  The threads can barely be felt.

The finials are simple black caps with shallow dimples.  The one on the cap is slightly wider than the one on the base.  There is a slight line around the edge inferring they may actually be made of two pieces, an outer ring and an inner stud. 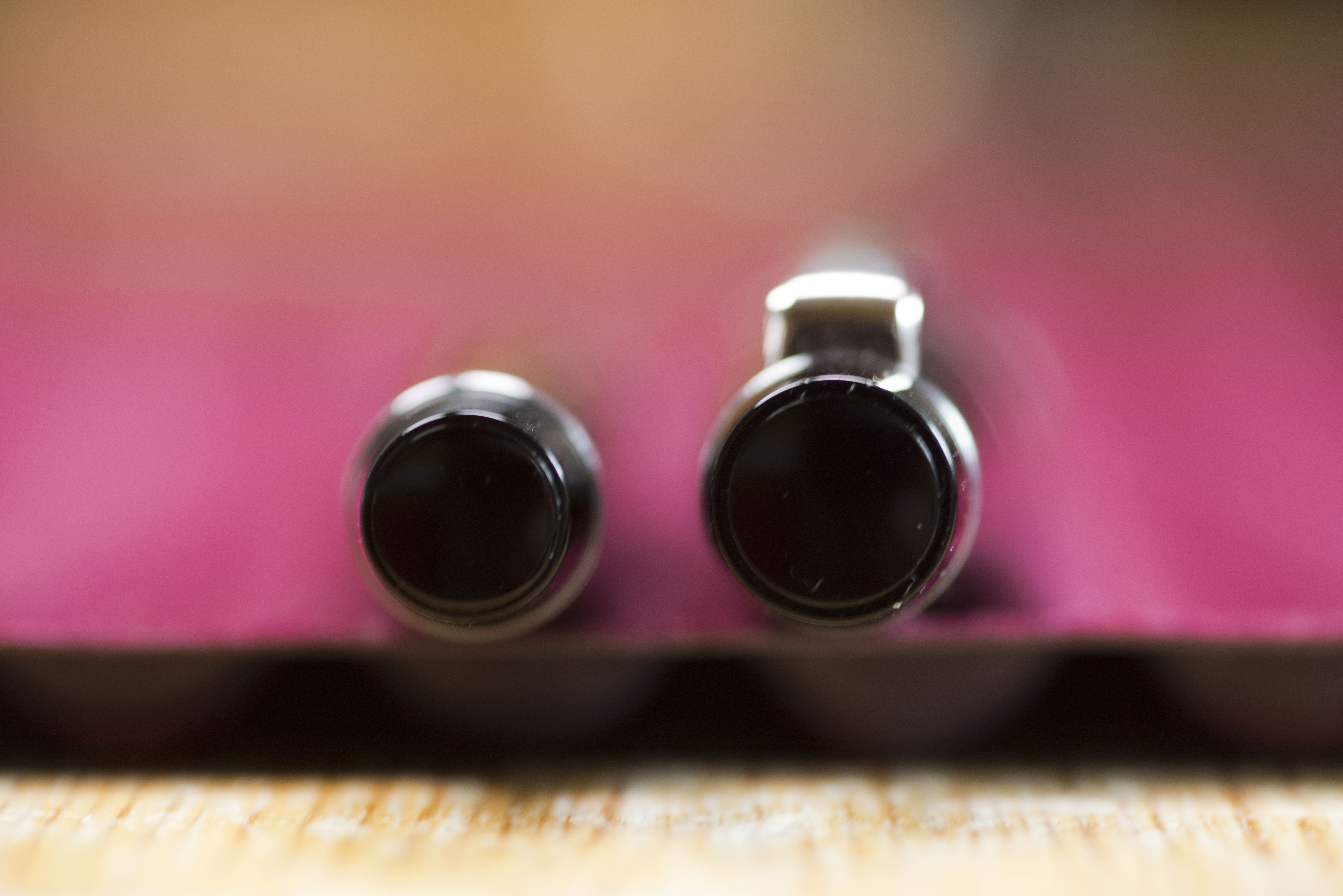 With the barrel removed, the converter and inner threads can be seen.  The latter is metal and provides the real weight to the pen.  Looking closely you can see it sitting inside the resin of the grip, the previously mentioned ring is a separate piece protecting the edge.  With the weight and balance point being where the fingers hold the pen, it is very comfortable to hold and posting the cap is barely noticeable with the balance point only being moved slightly backwards.  Speaking of which, the cap does post securely, though only really needed for the largest of hands.

For the comparison pictures I’ve not only included the usual Lamy Safari/Al-Star, but also my Pilot Custom Heritage 823 FA as well. 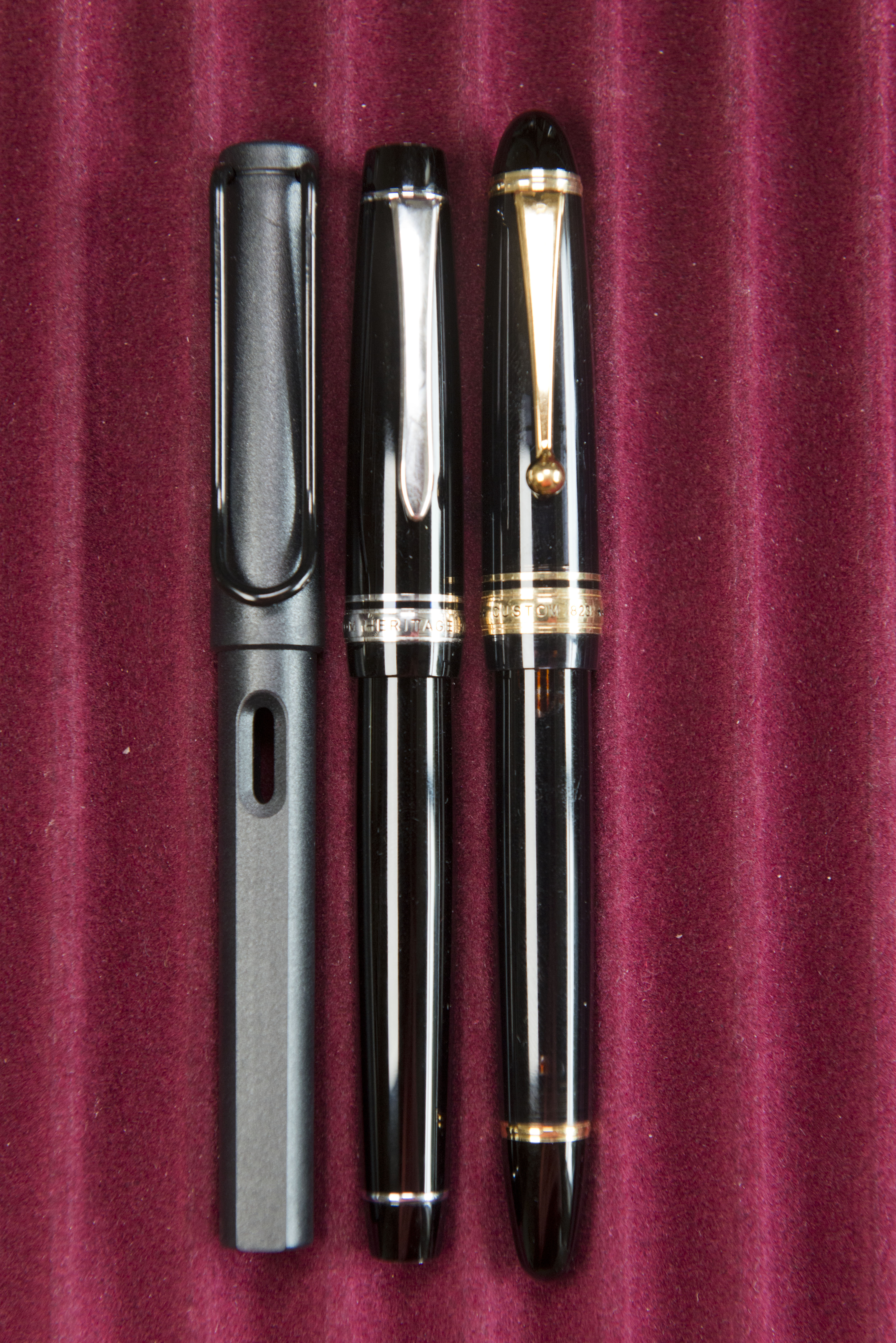 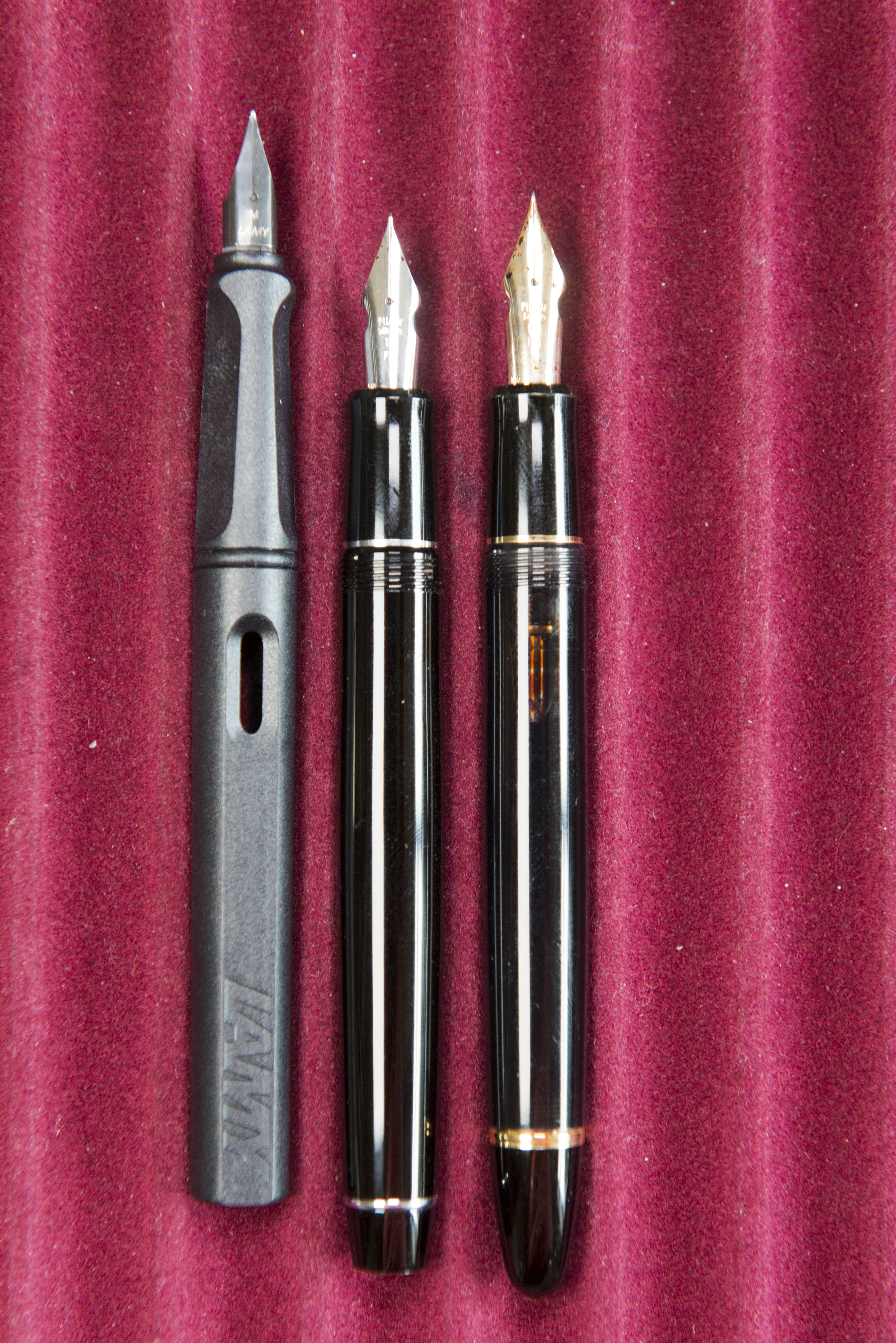 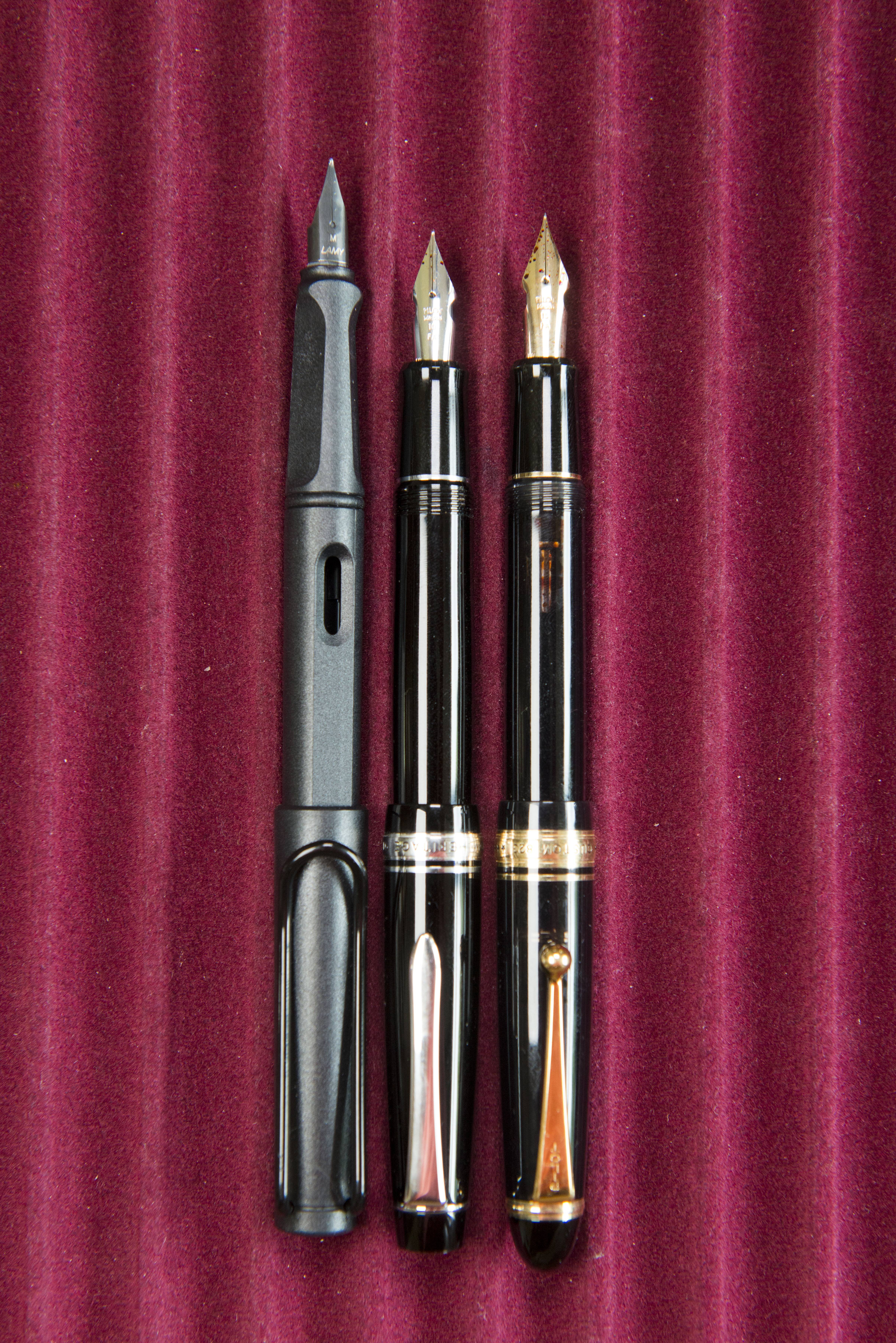 While the 912 can come in a large variety of nib choices, the FA is a popular option. For no obvious reason, and like the 823, 742 and 743, Pilot only seem to be interested in selling this pen model in Japan and the USA.  In the UK and Europe the only flex nib Pilot we can buy is the Falcon.  I picked up my 912 FA second hand from a fellow pen club member.

The nib is stiffer than on the 823, but there again it is smaller.  It still has a nice amount of bounce even under the lightest of touches, and provides line width variation with only moderate pressure.  While being gold, the Pilot FA nibs do seem to be able to take a fair amount of abuse, and while I would not recommend trying to push it to the maximum, these are still good pens for newer people to flex in a fountain pen.  There is a downside though.  The feed is the same as on the other nibs and unless you’re writing slowly and carefully, the ink flow can not keep up, resulting in tramlines.  Slow and steady and everything is fine.  I have noticed, in preparing for this review, that both the writing angle and paper can make a difference.  On a 70 gsm Pukka pad the pen tramlined more readily than on a 80 gsm Oxford pad.  Also, while creating the writing sample on 80 gsm Rhodia, my figure of 8s were interrupted by a phone call.  On starting a new batch, the pen having been capped and rested for a few minutes, I was then able to flex without running short on ink, from the writing sample at the bottom you will see that before the phone went off it was tramlining rather badly.

For non-flex writing, the nib effectively provides a Japanese style fine or extra-fine line, with an appropriate level of toothiness.  I have notice that on upward strokes it can occasionally feel as if the nib is just catching the paper, but this is rare.

In conclusion, the pen is nice to use, well balanced, but has to be used carefully else it is easy to produce a little flex and then start to suffer from ink flow problems.  The larger nib on the 823 is more forgiving and if it is the FA nib you’re interested in then I would suggest looking towards that pen instead of the 912 if your budget will allow it, though remembering the 823 is around 50% more and harder to get hold of.  While this review is over the 912 FA, my experiences with the pen and other Pilots would suggest the same body with a more regular nib would provide a very pleasurable writing experience, I’d prefer to test this assumption so please do not take it as gospel.  As to the Con-70 converter, I have no problem with this.  It does hold a reasonable amount of ink and is not that bad to fill and only slightly more awkward to clean.  There would be nothing to stop you using cartridges or an alternate Pilot converter.

The other question is, should you consider this pen if you already have an 823 FA.  No.  The larger pen is superior in every way.  If you have a 912 FA should you consider an 823?  Maybe, but only if you want the extra ink capacity or better ink flow.

Packaging wise, the pen comes in a simple clamshell box, with a cardboard outer.  I assume it comes with a cartridge as well as a converter, but as mine was bought second hand it was converter only. 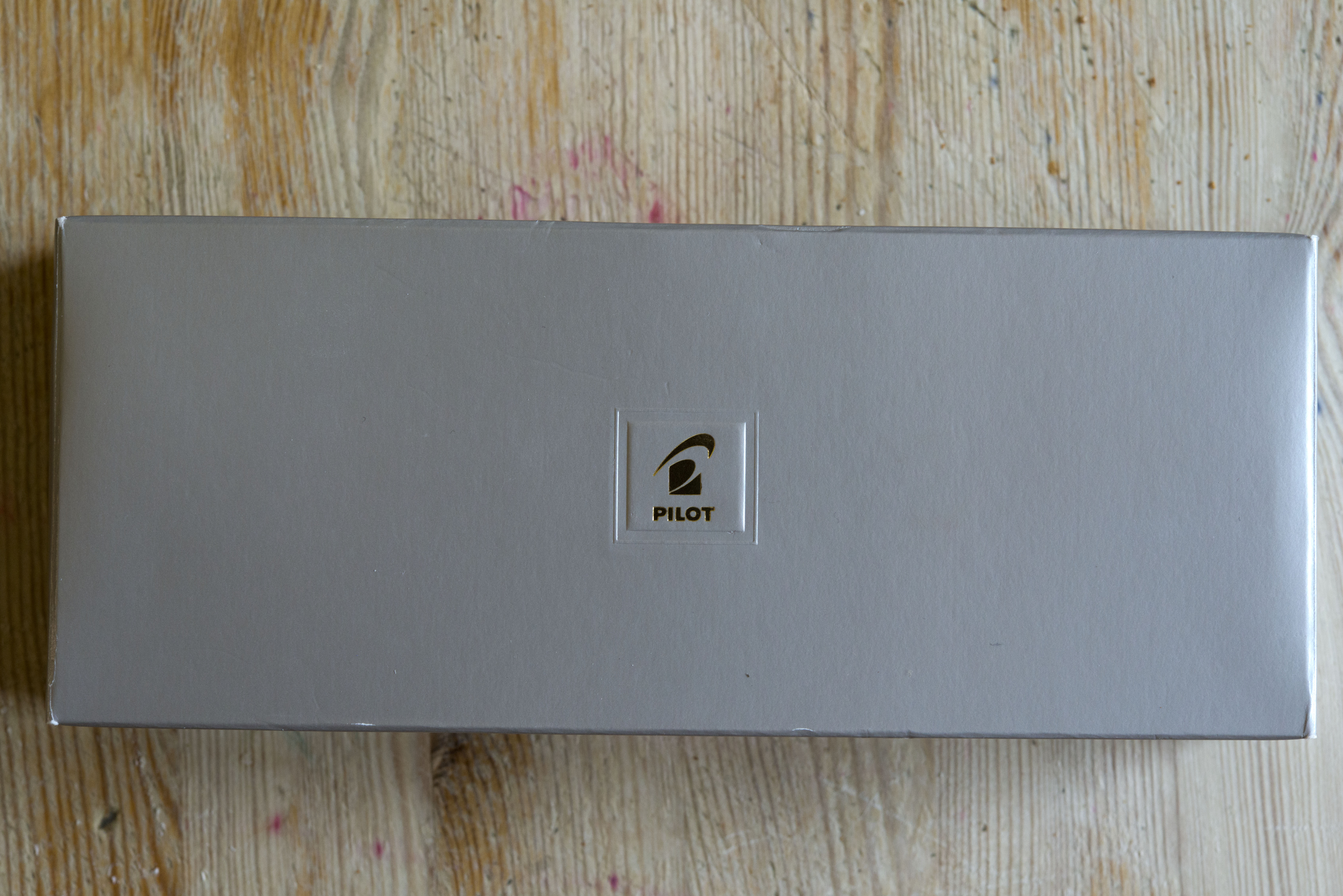 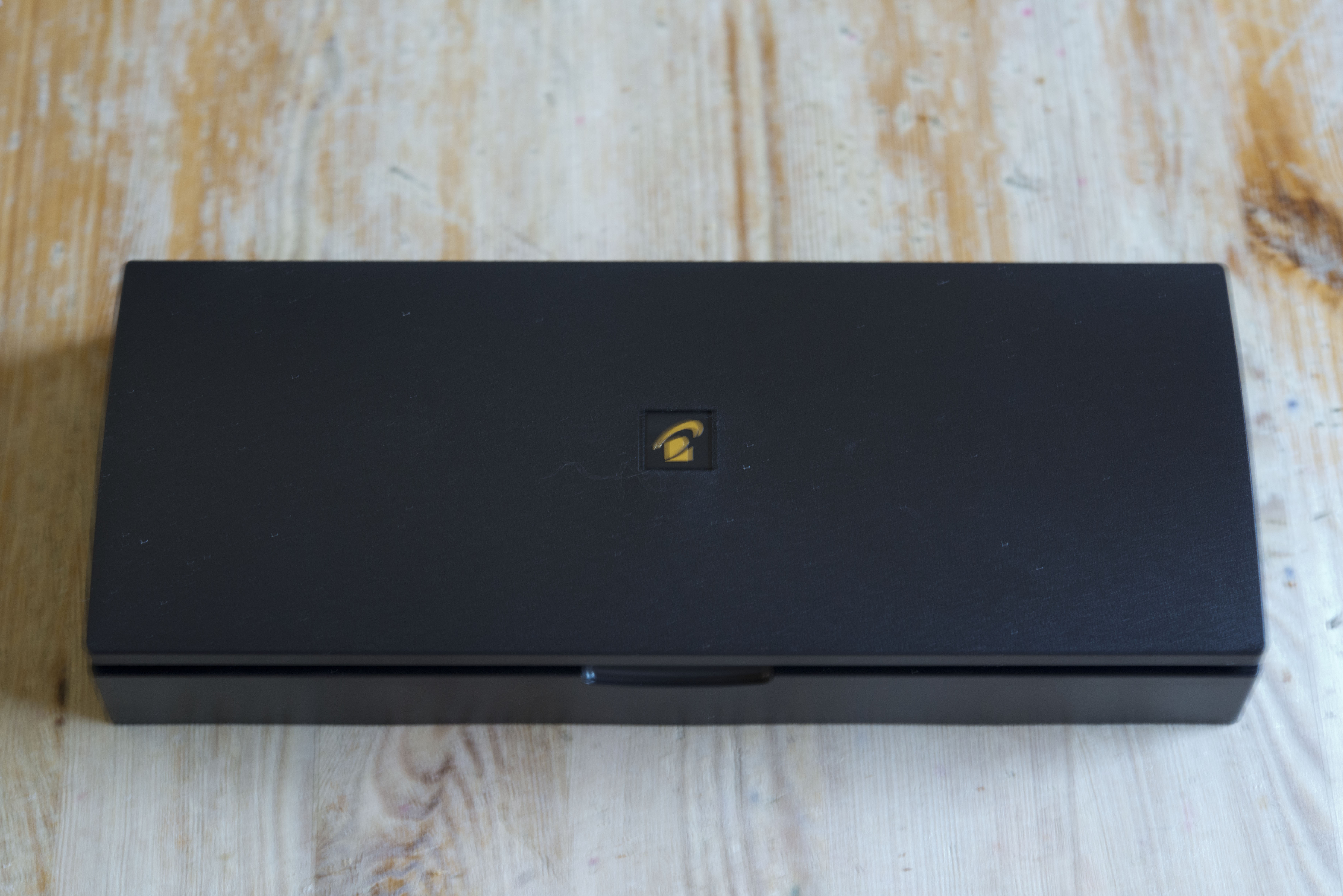 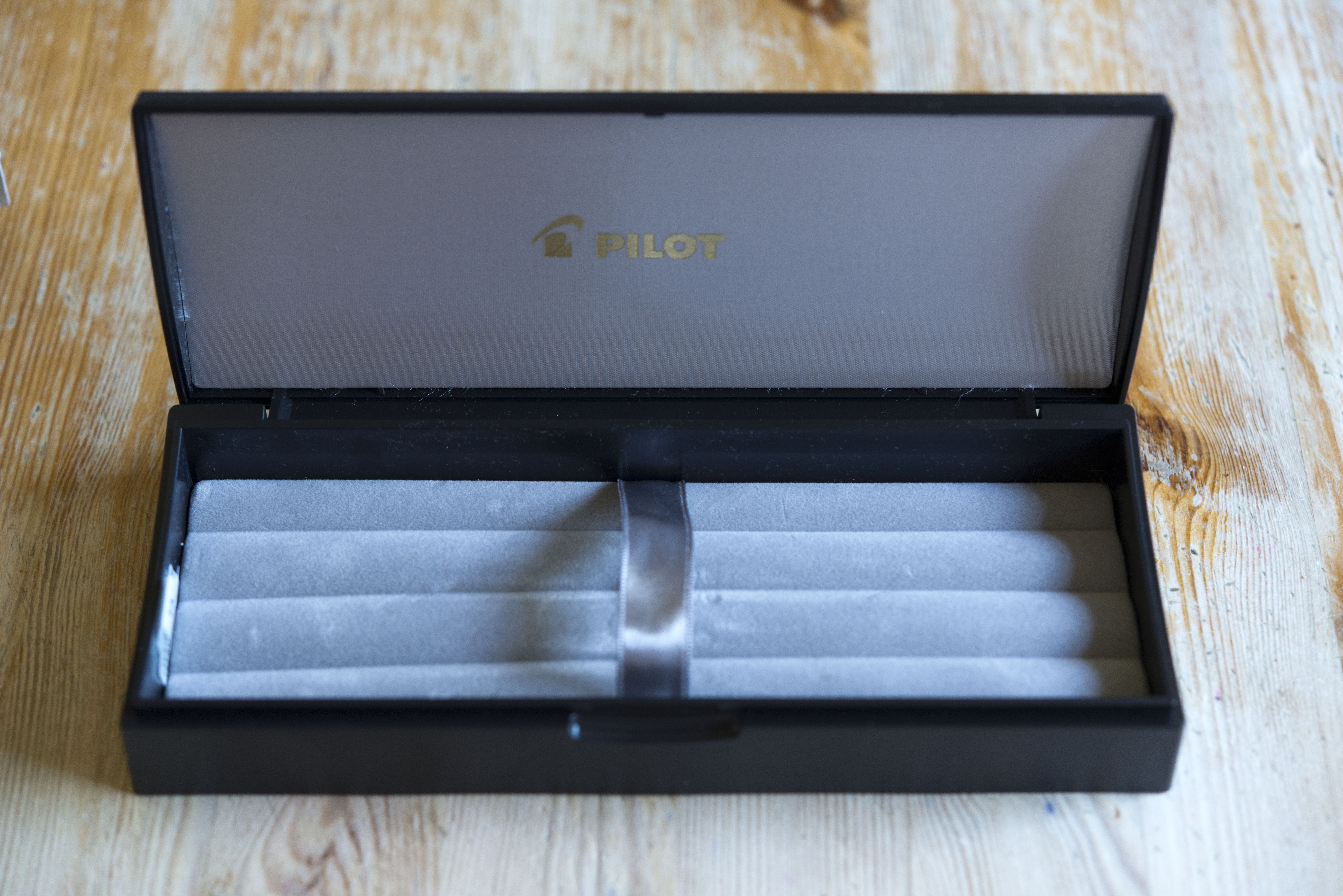 By coincidence, when creating the writing sample, I noticed the set above is from my 823 FA, with the same ink, so I’ve left that in the shot for reference. 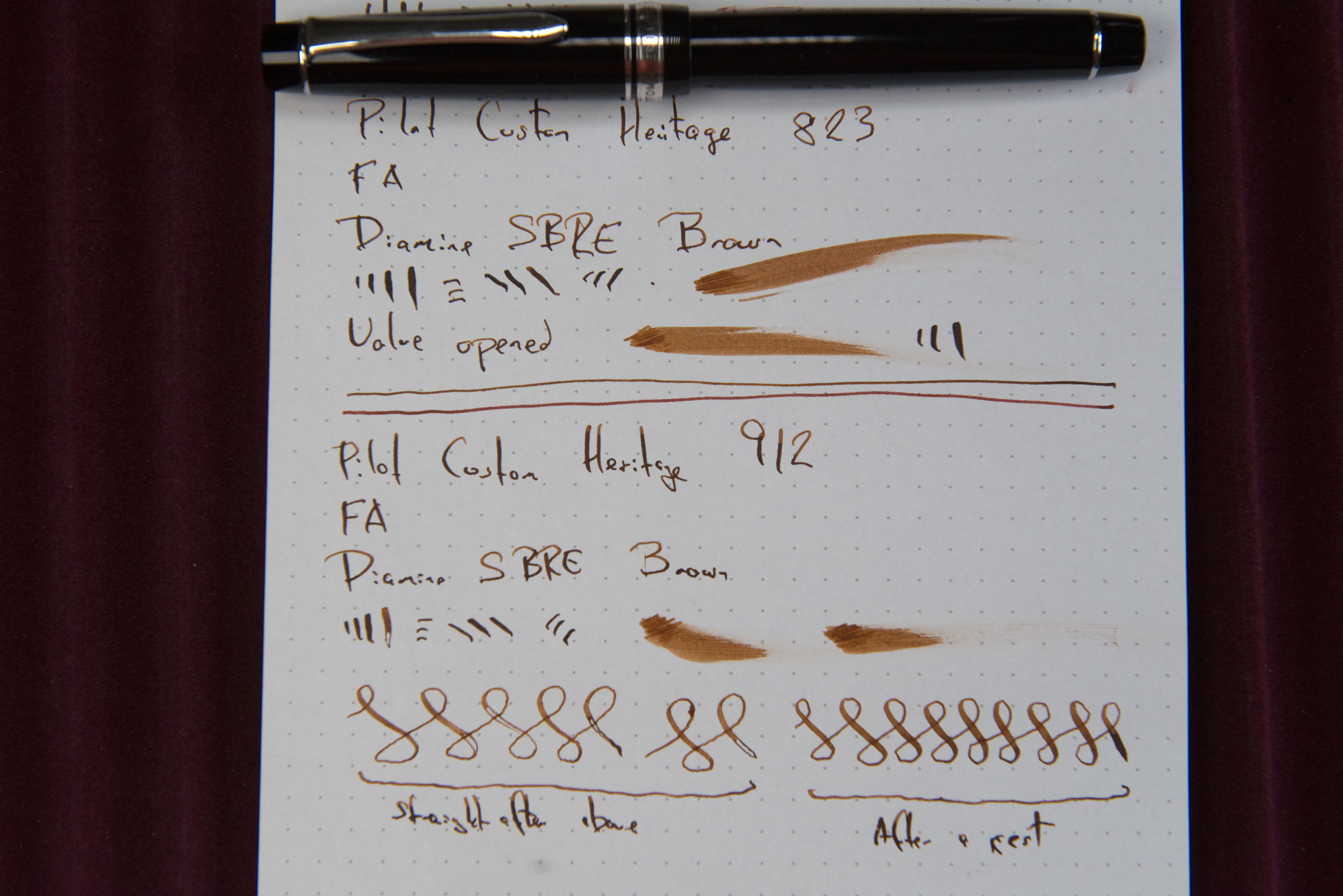