When I started thinking about which pen to review next, little did I think it would be a recent purchase which I had been looking at, half-heartedly, for a few years.  Additionally, the pen itself is a contradiction in design and hard to identify what market it is targeting.

So where does the Accent fit in the Lamy catalogue.  This can be considered a complex question, for not only do many of the pens compete with each other, but the Accent comes in two forms, hitting two different areas.  An aluminium bodied pen with a steel nib, going for around £55, and a lacquered body with a gold nib for around £180 (though can presently be found for closer to £160).  The cheaper version could fit in price wise with the Lamy LX, Studio, Scala, and Aion, but at the same time it’s perceived profile would pitch it against the Logo, CP1, LineA and ST.  The more expensive version gets more confusing, for not only can you replace the steel nib with a gold one on any of the previously mentioned pens, but also the CP1, Studio and Scala have limited editions with gold nibs for less money.  In addition to this, from a cost point, you can then also add the 2000 (both the makrolon and steel versions) as competition.  Confused?  Nokia self-imploded from less internal competition. 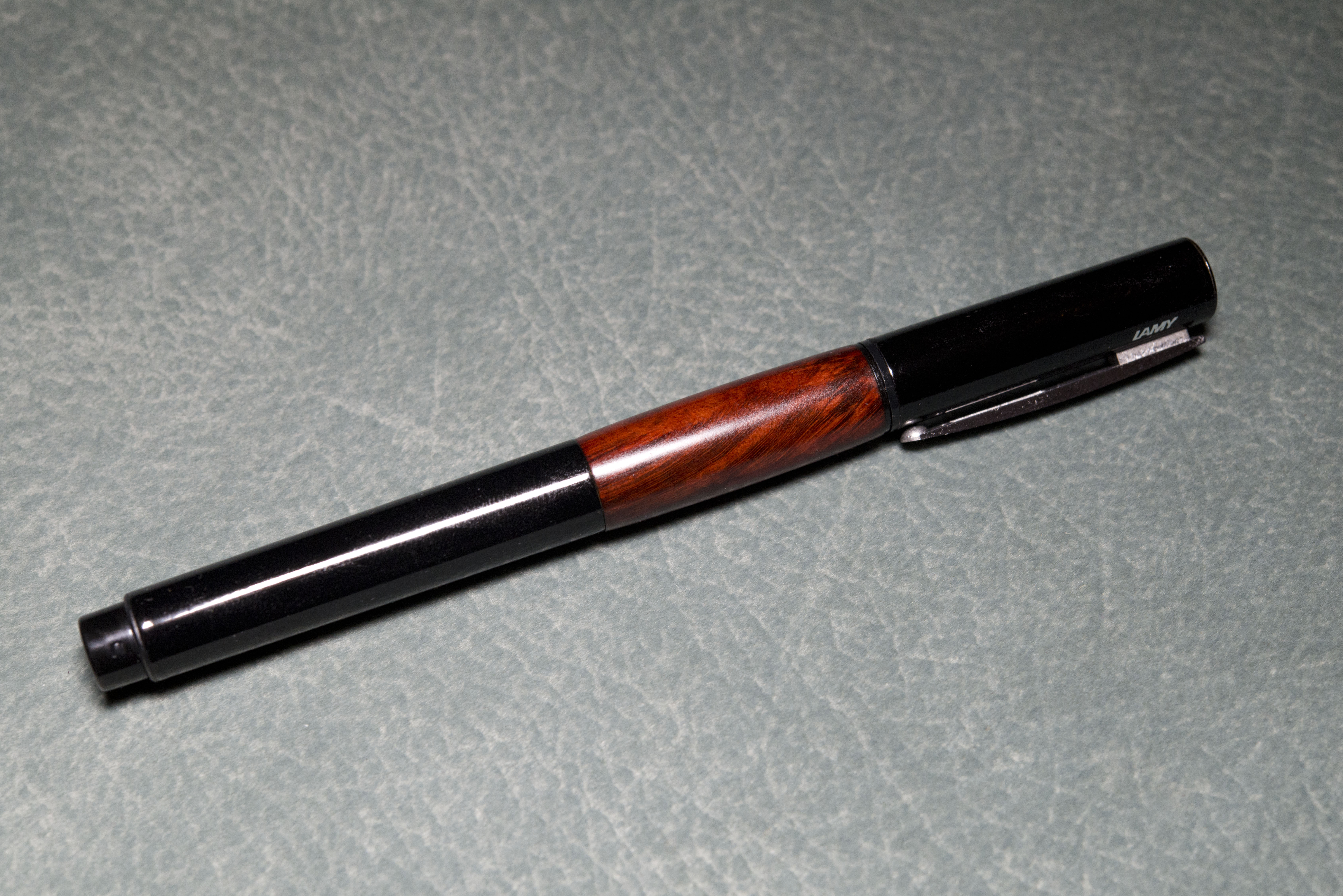 The pen itself came in the basic Lamy cardboard box with a convertor and the ubiquitous blue cartridge.  For the steel/aluminium version this would be fine, for this, much more expensive model, I was surprised one of the larger luxury boxes was not used, such as happens (or did for me) with the upper end Scala and Studio models.  In reality this did not bother me. 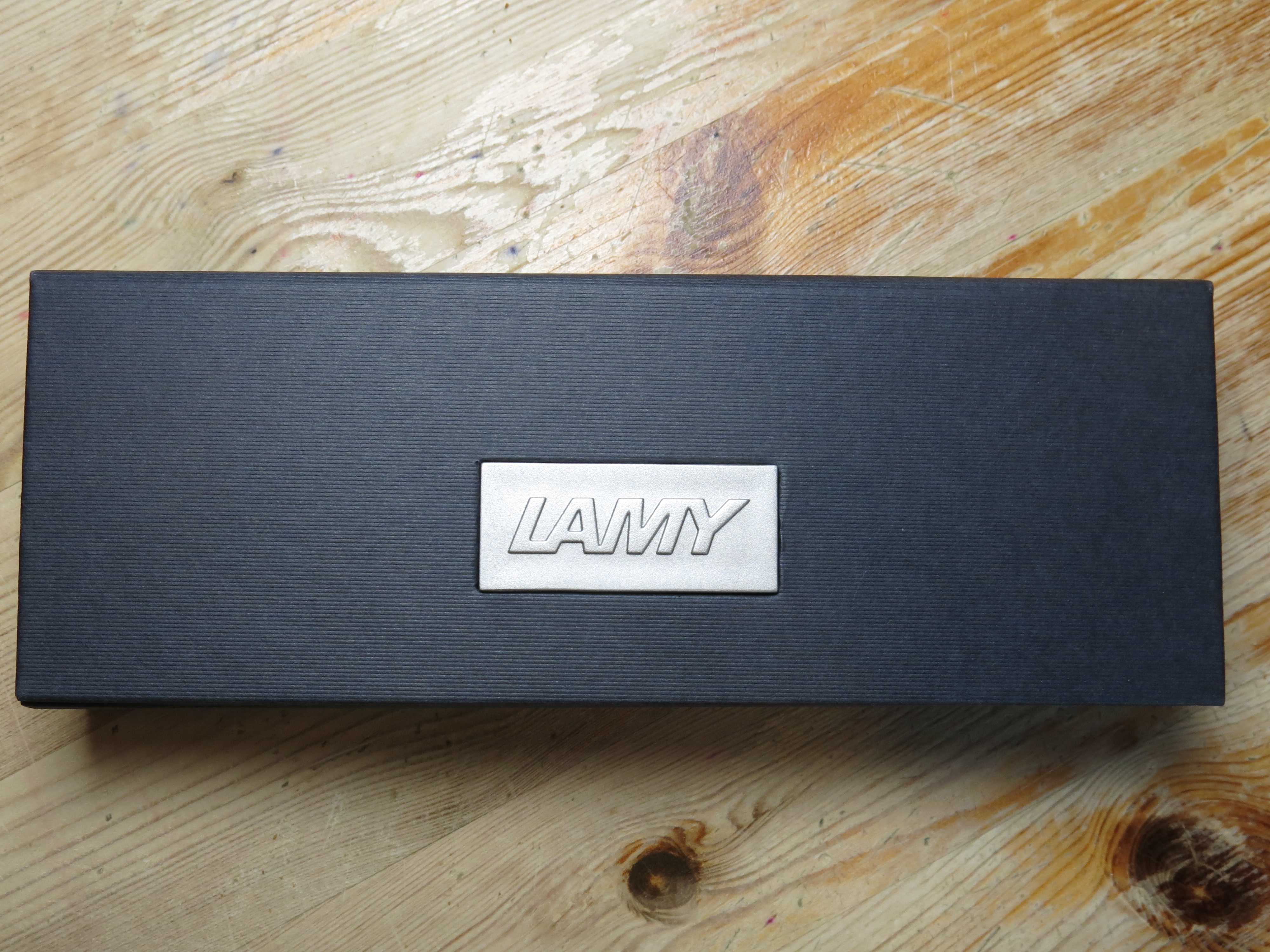 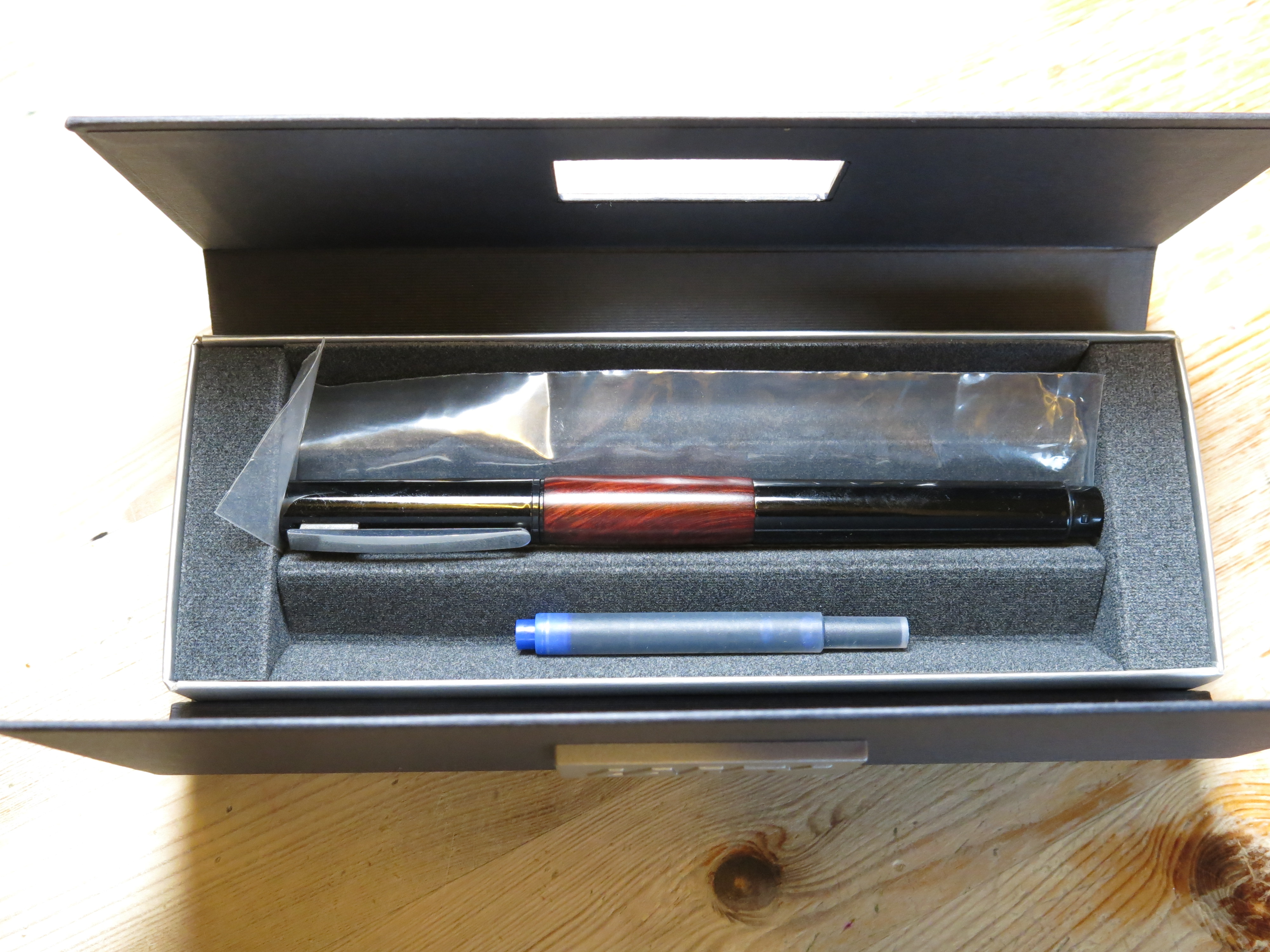 Visually the pen looks smart, though thin.  I prefer fatter pens and have previously tried and put aside a Logo, so this purchase made me a little nervous, as well as being part of the reason it took me several years to bite the bullet and get this particular version of the pen.  The lacquer work is shiny and uniform, almost plastic in appearance.  The only variation in colour is a small silver Lamy logo to the left of the clip.  The top finial is plain lacquer, which I somehow managed to scratch.  Totally my fault, and it does show the pen has been used.  The barrel finial is an indented plain plastic/resin plug with a moulded clutch on opposite sides to allow the cap to post.  The clip is relatively generic, hinged below the top of the cap, and is both strong and effective.  The grip section is of a nice dark polished briar wood, which is also warm to touch.  It bulges out from the body in a pleasing manner, adding a millimetre of width to the barrel 11.5mm to 12.5mm).  This does not sound a lot but it does make a noticeable difference.  The grip can be swapped out, both for the diamond lacquered version that can be found on the alternate high end model, and the plastic and wooden options on the cheap version.  The grips can be purchased separately with the high end ones (code Z91) being £26 each and the cheaper ones (Z90) being just £7.50.  The grips themselves (judging from this one) are plastic tubes with an outer layer. 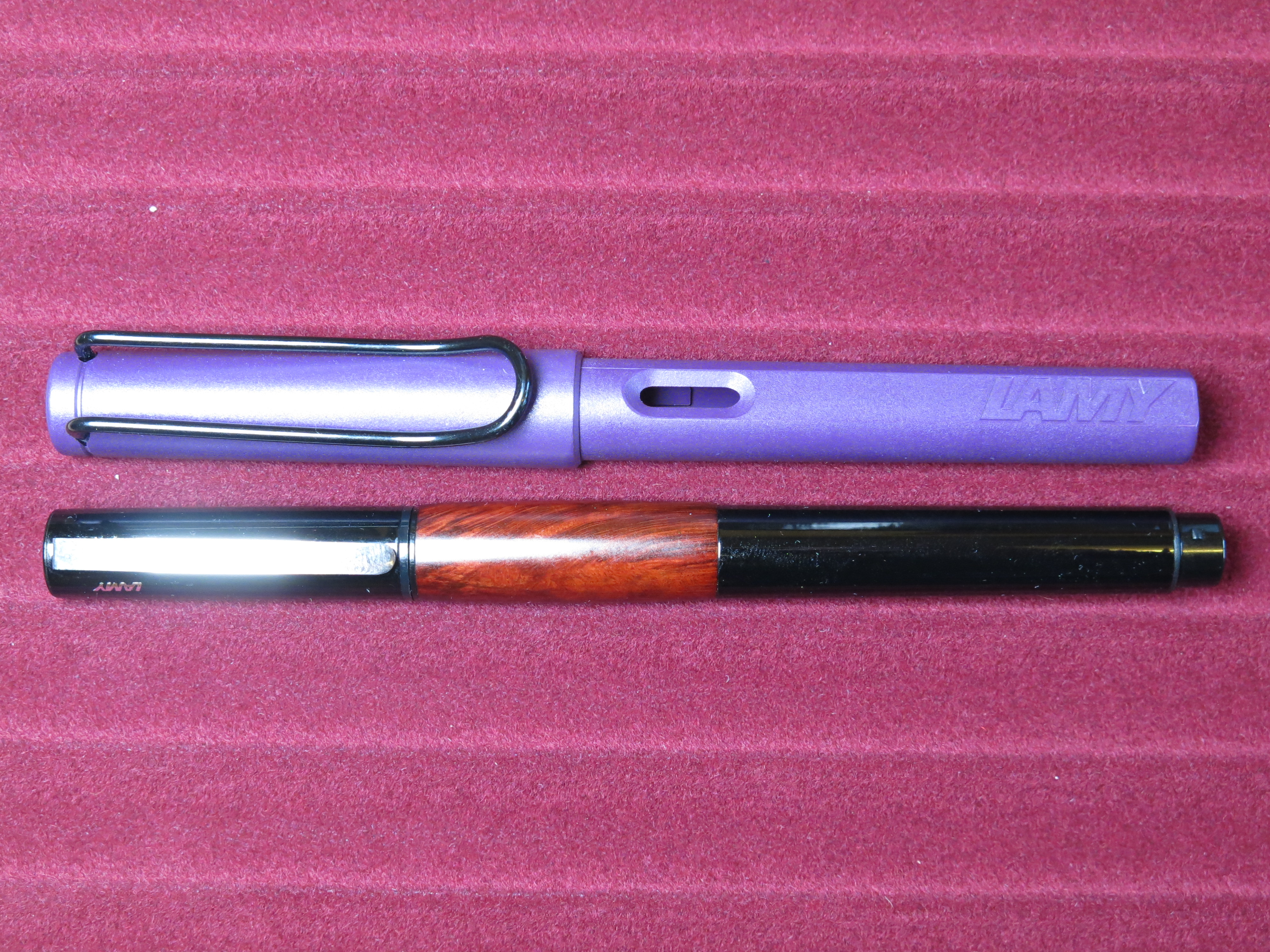 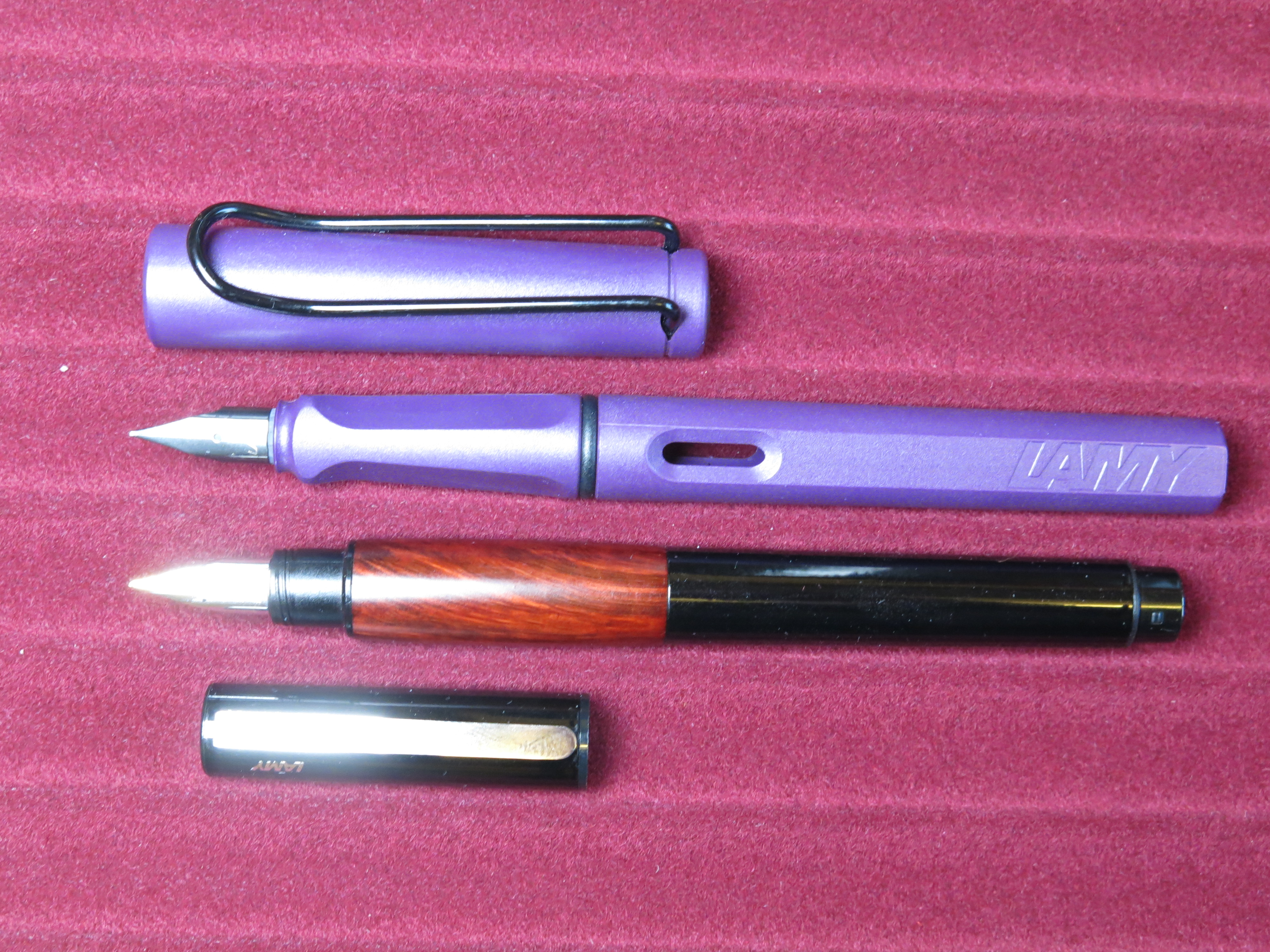 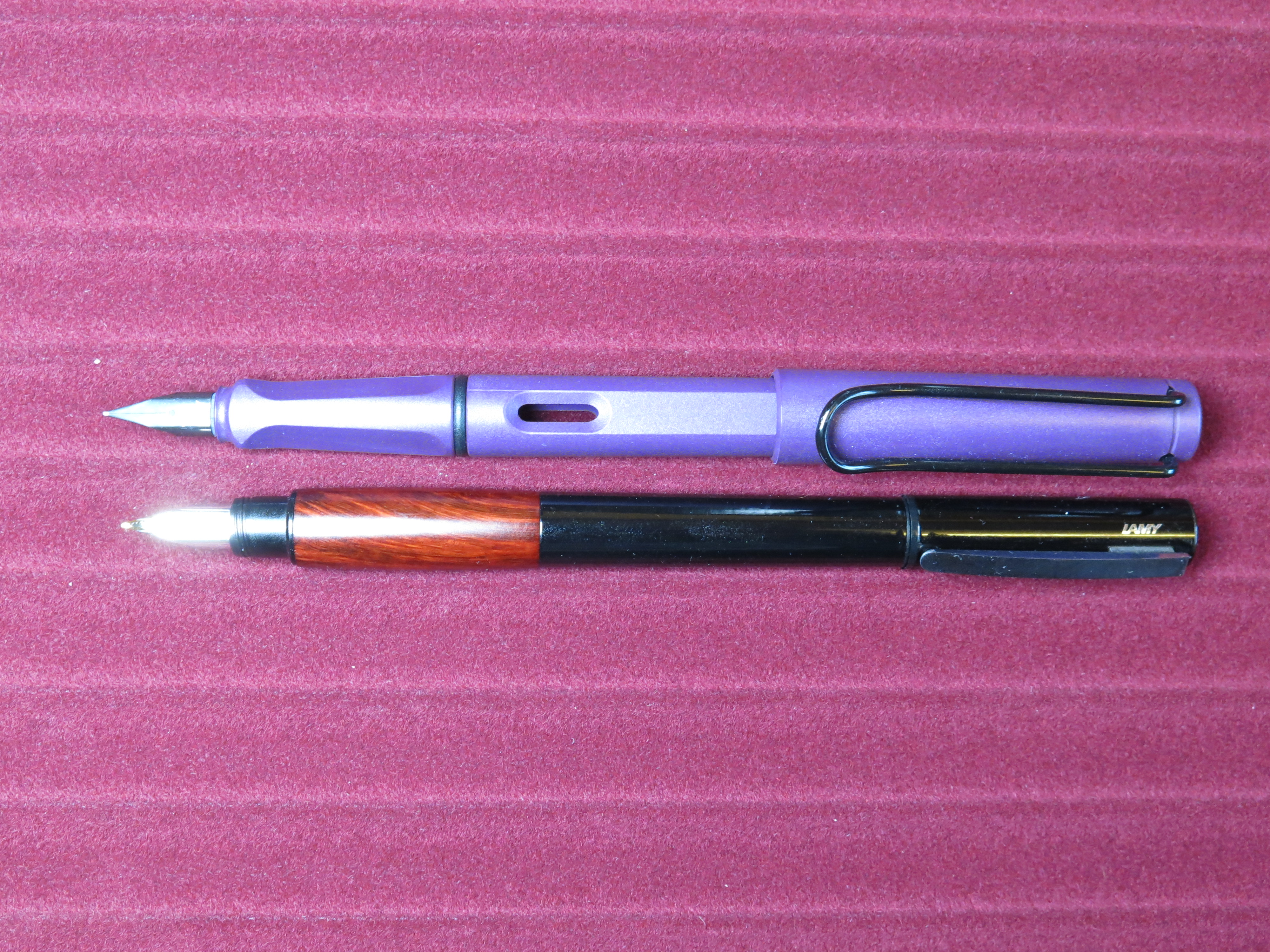 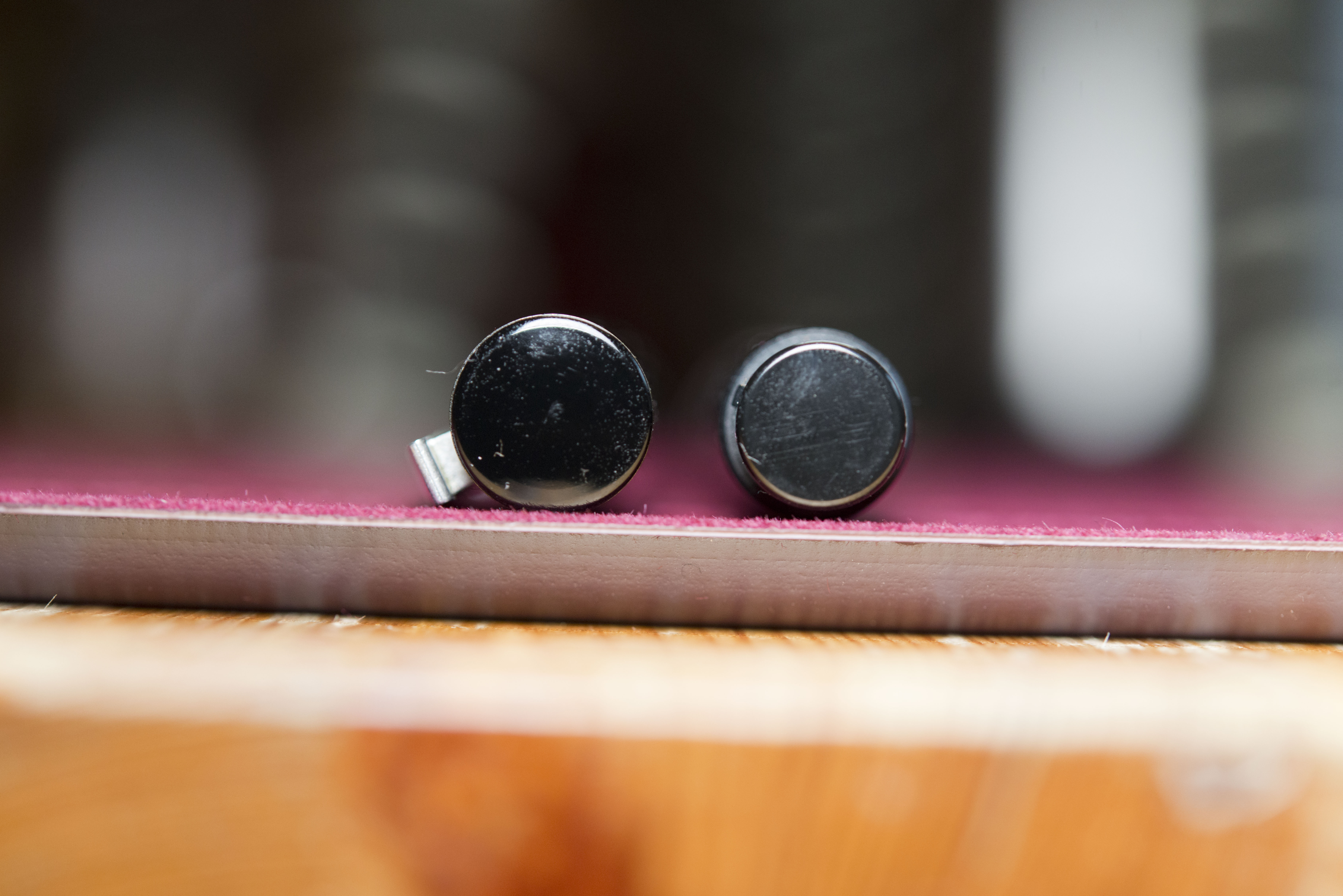 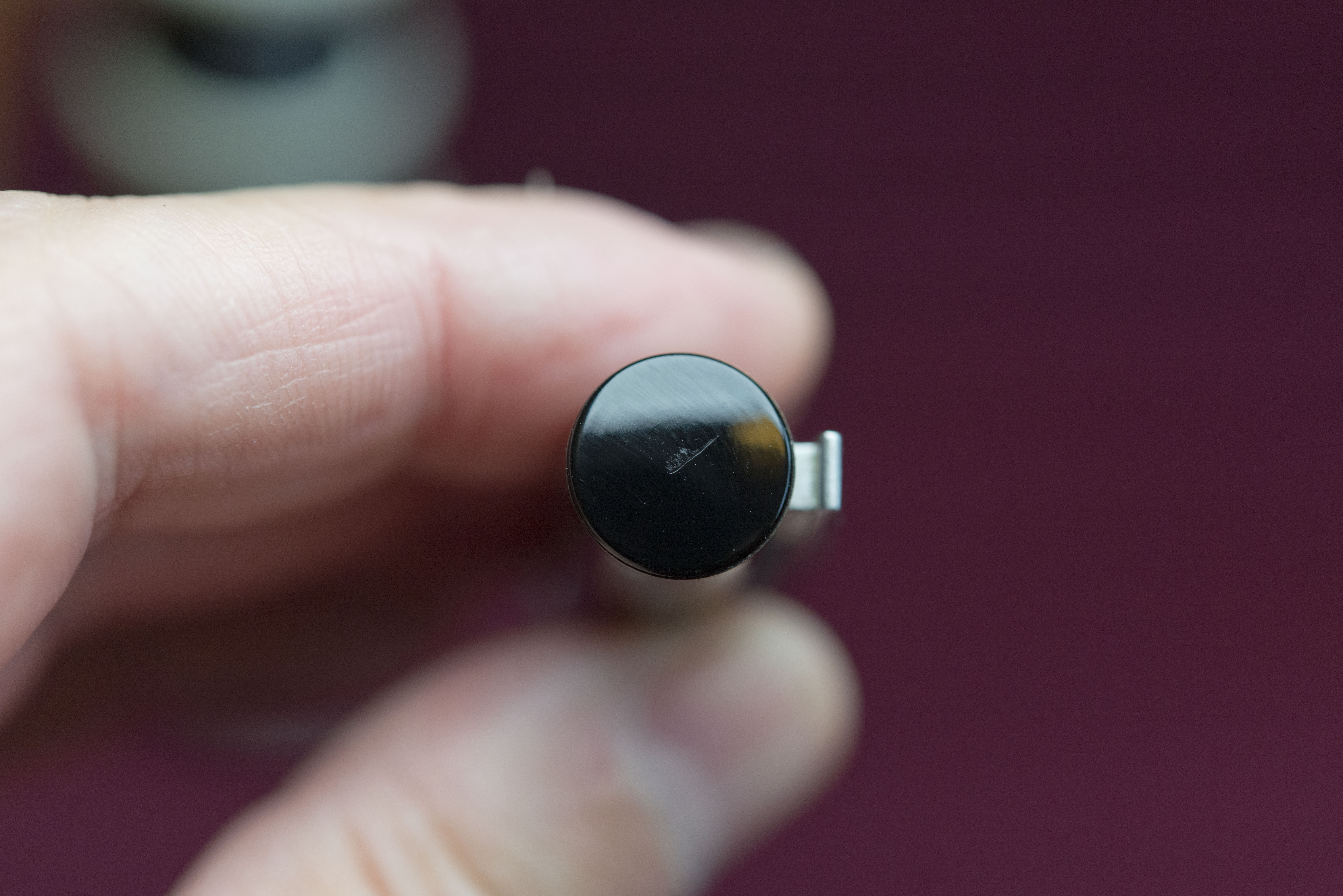 The cap twists on/off, with just a third of a turn required.  Closed it does feel secure, but I would still feel slightly nervous clipping this on a jacket pocket, as just slight movement could cause the barrel to unscrew from the cap and drop off.  At the front of the grip there is a short, indented plastic part with the threads at the front of it.  The pen can be held here but it feels too short and slightly slippery.  The pen is designed to be held by the removable grip section, so fingers should be away from the nib.  The latter is the standard Z55 affair (or Z50 on the cheaper models), and so can be easily swapped if required/desired. 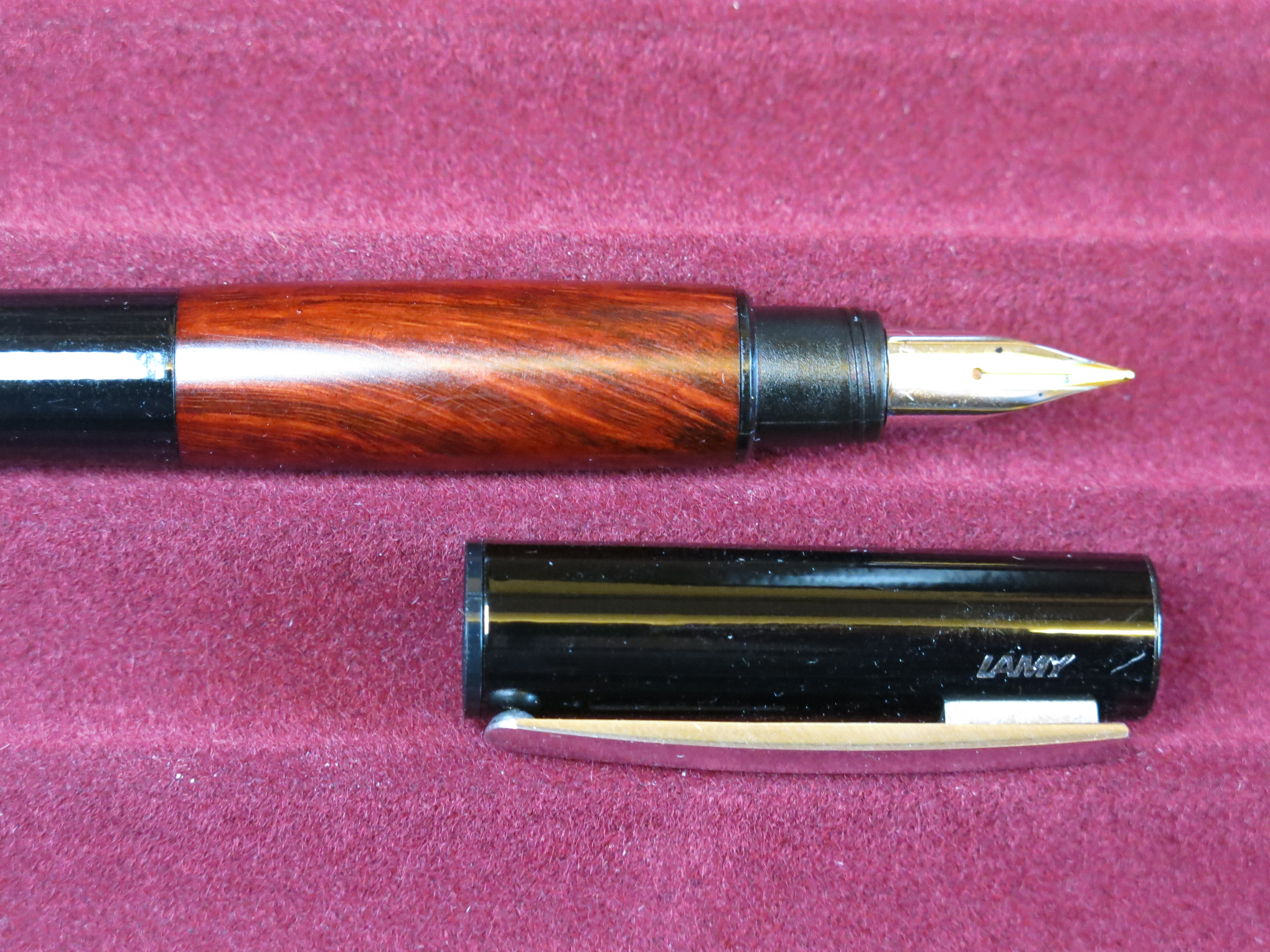 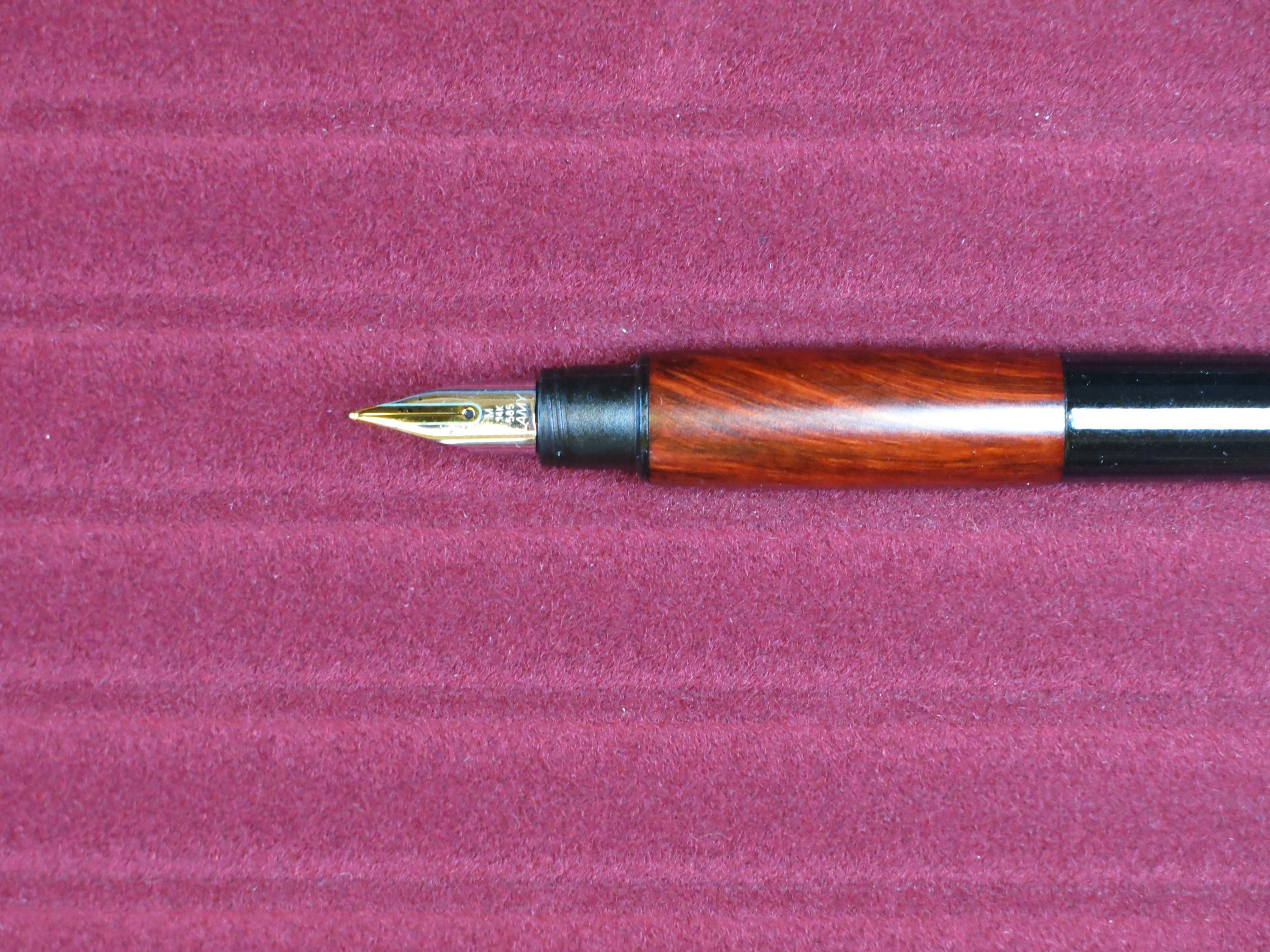 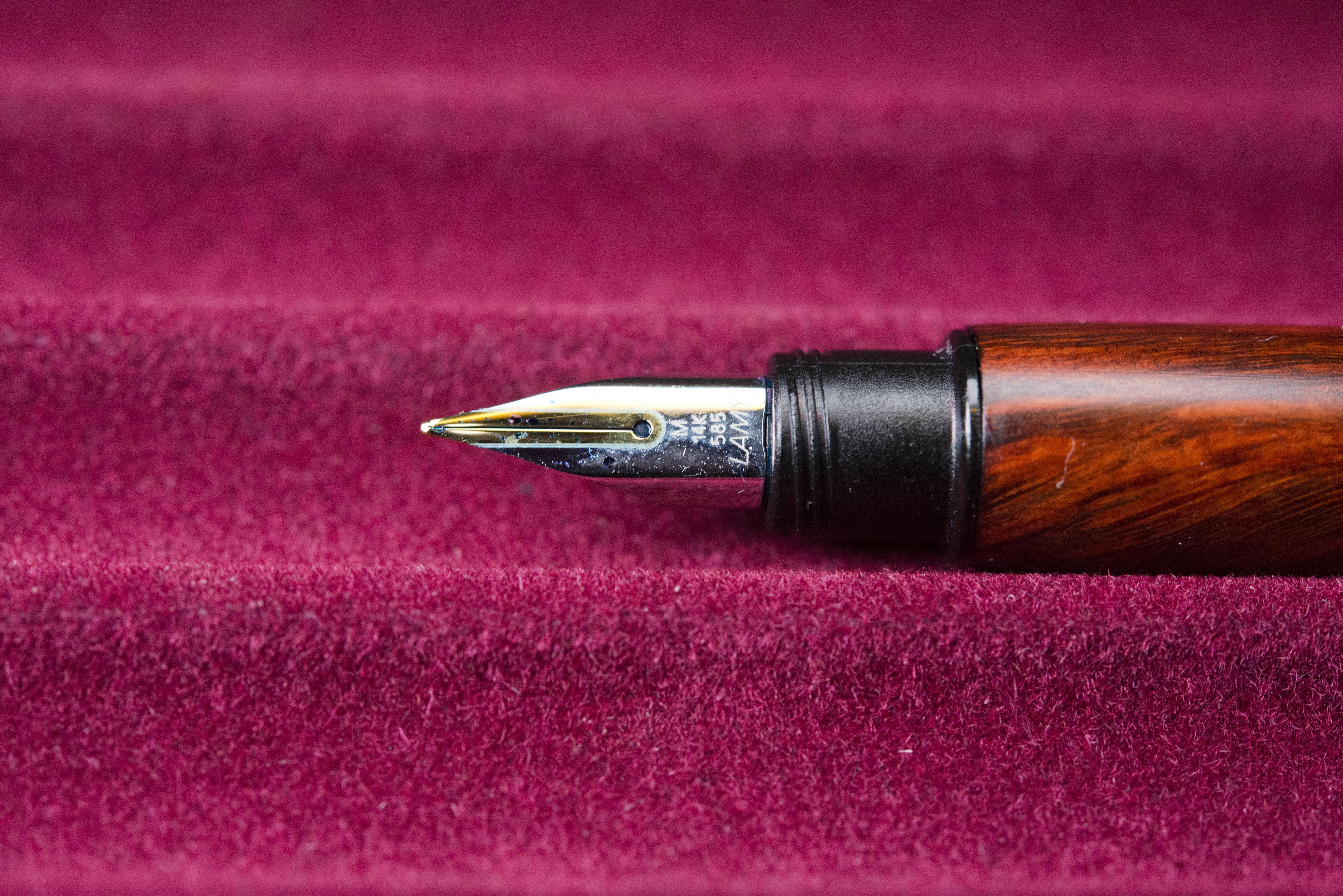 (note the mark on the grip is a fibre picked up from the tray, not a scratch)

Holding the pen at first can feel a little weird, then rather comforting.  The narrow barrel gives the anticipation of holding a thin, pencil like pen, whereas the feel in the fingers provides a more normal experience.  Most the weight is in the grip so the pen does feel balanced.  Post the cap (which it does by a satisfying click) and subconsciously the pen initially feels back weighted.  Actually it shifts the balance point from the middle of the grip to the middle of the pen, so most people will still find it quite natural.  Posting extends the length by just under half again.  Weight wise, this is a comparatively light pen. 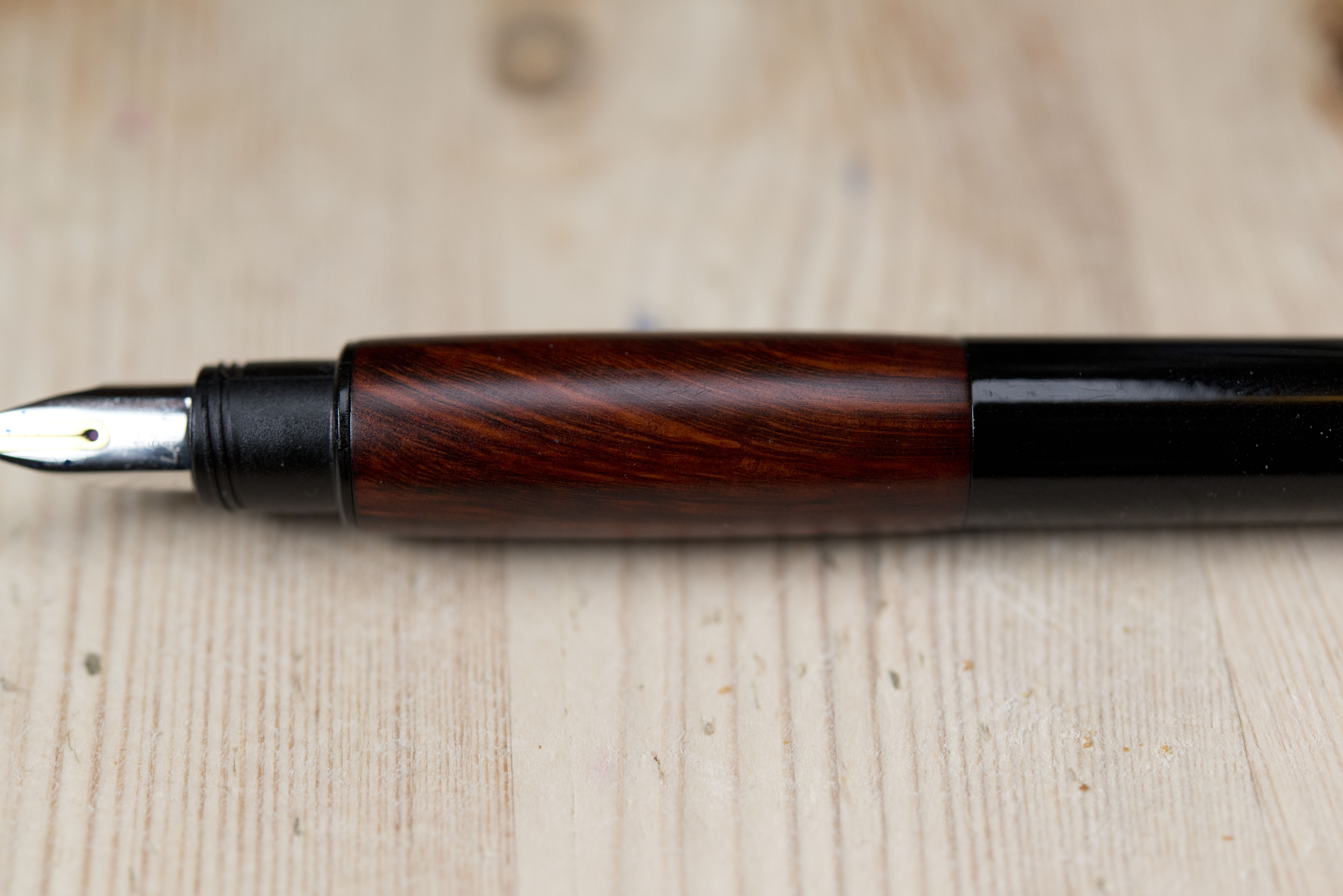 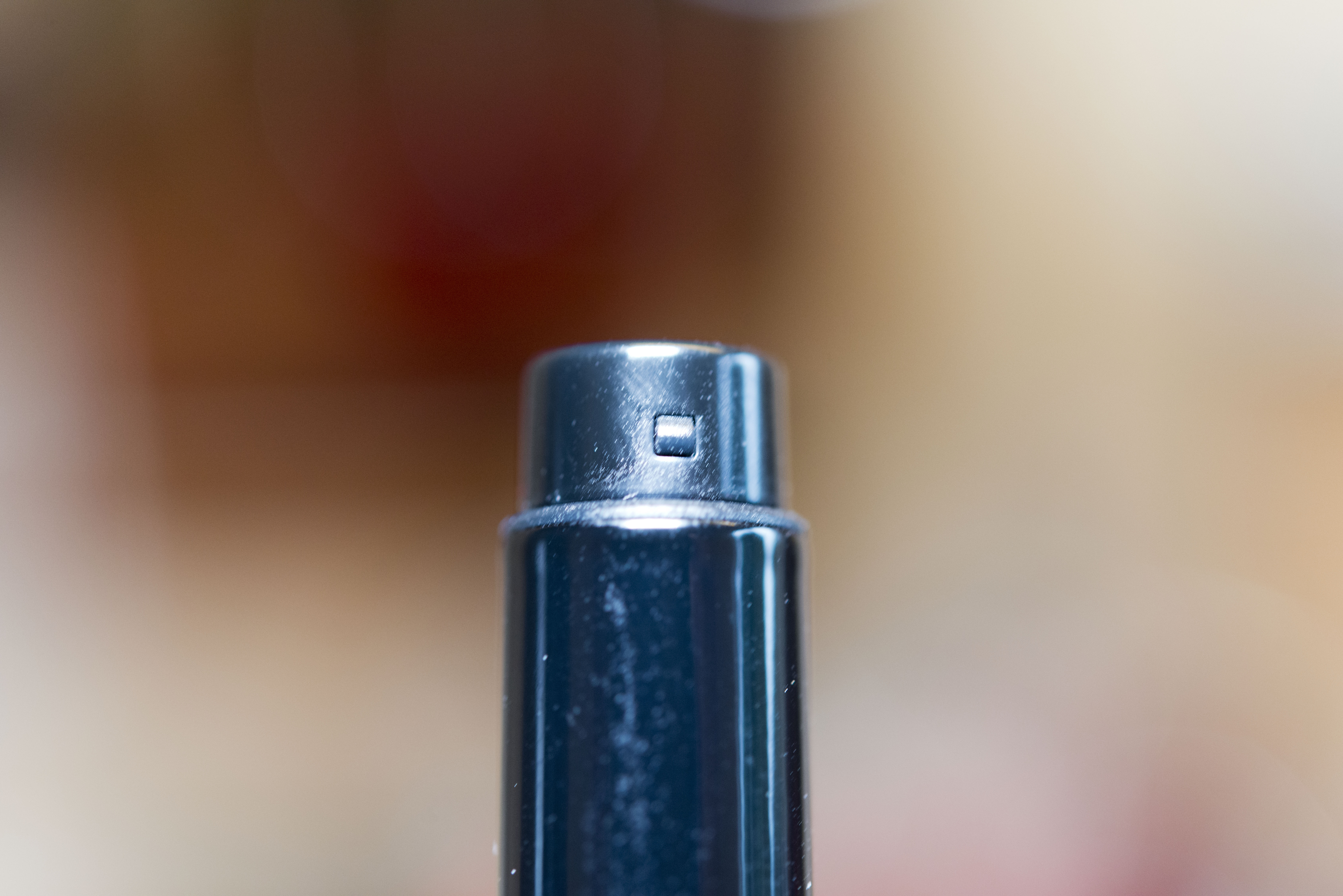 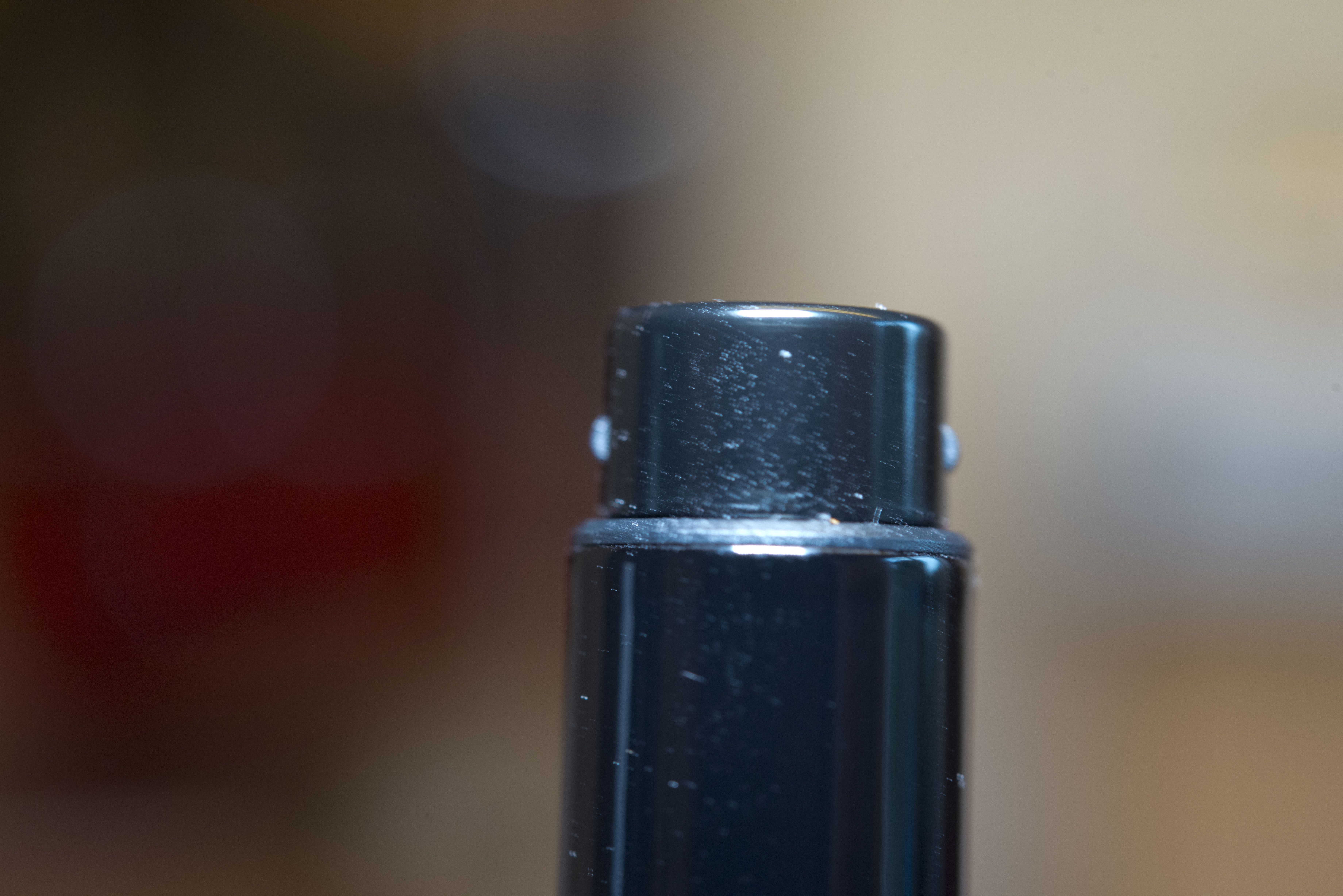 For anyone who has used a full sized Lamy gold nib, the writing experience is as expected.  For those who’ve not, then prepare to be pleasantly surprised.  I am not alone in describing Lamy gold nibs as some of the most underrated ones out there.  With the steel nibs being very stiff and pencil like, people expect the same from these, except this could be no further from the truth.  Many will find the experience is closer to that of an OMAS of Graf von Faber Castell pen, as in the nib is slightly soft, springy/bouncy, and on the wet side.  This provides a pleasant buttery smooth writing experience, though those who prefer the more tactile experiences of a Sailor, Pelikan or Montblanc nib may feel there is a lack of feedback and character. 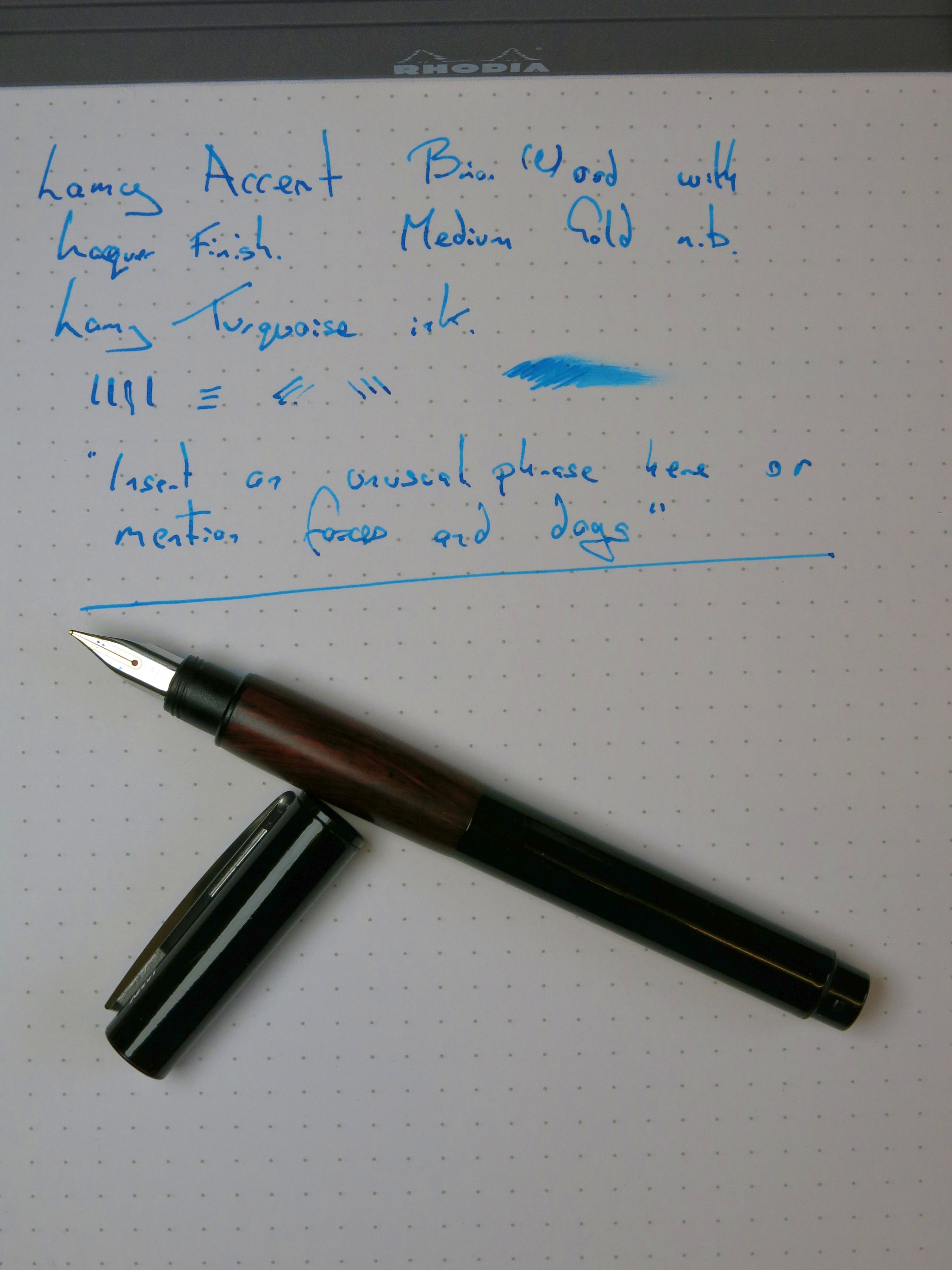 The pen uses the Lamy propriety cartridges and convertor system.  The barrel unscrews from behind the grip, with the grip easily sliding off.  The nib section has a disk against which the grip rests and guiding lines to stop the grip rotating and hold it in place.  The barrel section has a slimmer front where the grip goes, and this screws up to the guiding lines.  There is also a metal disk at the back of this part, which I think is meant to act as a clutch as the grip does click on to it, but very lightly.  Assembling the pen is easy.  The grip will only fit one way.  Sliding on to the barrel only one side will fit, and this can then be screwed in to the nib section.  The grip will naturally be lined up with the guiding lines by the act of rotating the barrel.  Alternatively, the grip can be slid on to the nib section (if on the correct way round it will sit securely, if not it will rotate), then the barrel can be screwed on.  Each way is easy and I see no advantage to either.  This also means there can be no fear of wearing out or damaging grips if regularly swapped around. 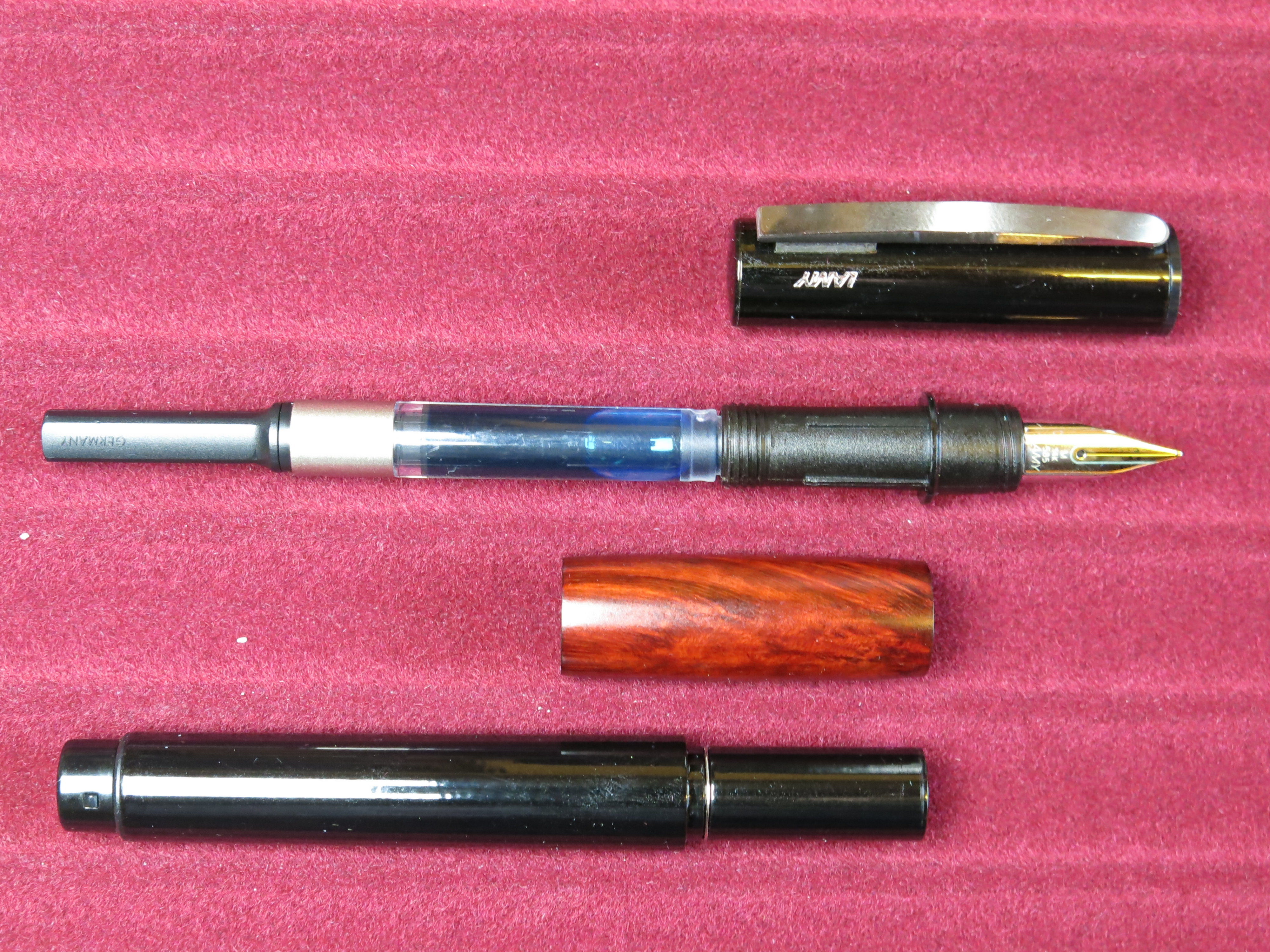 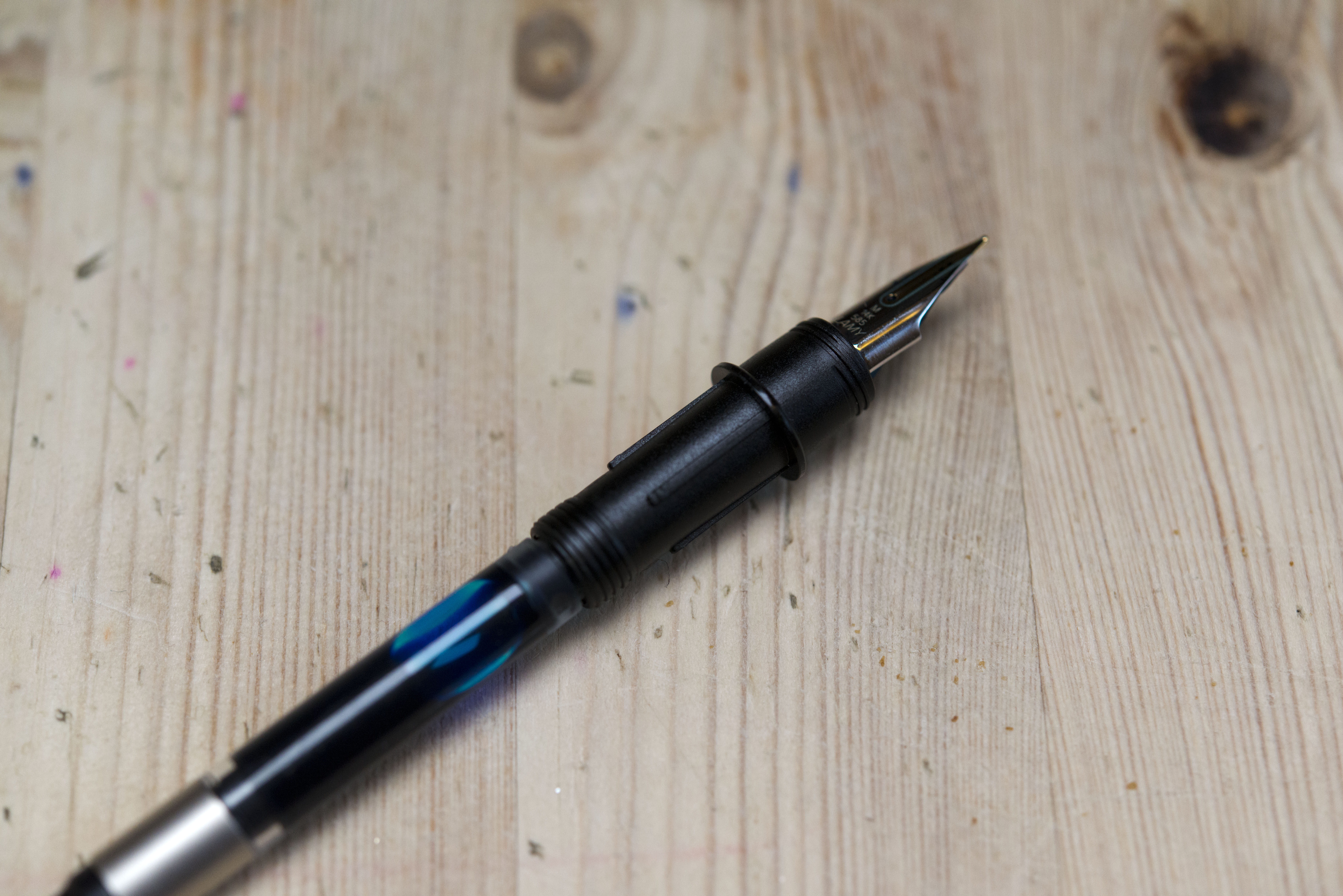 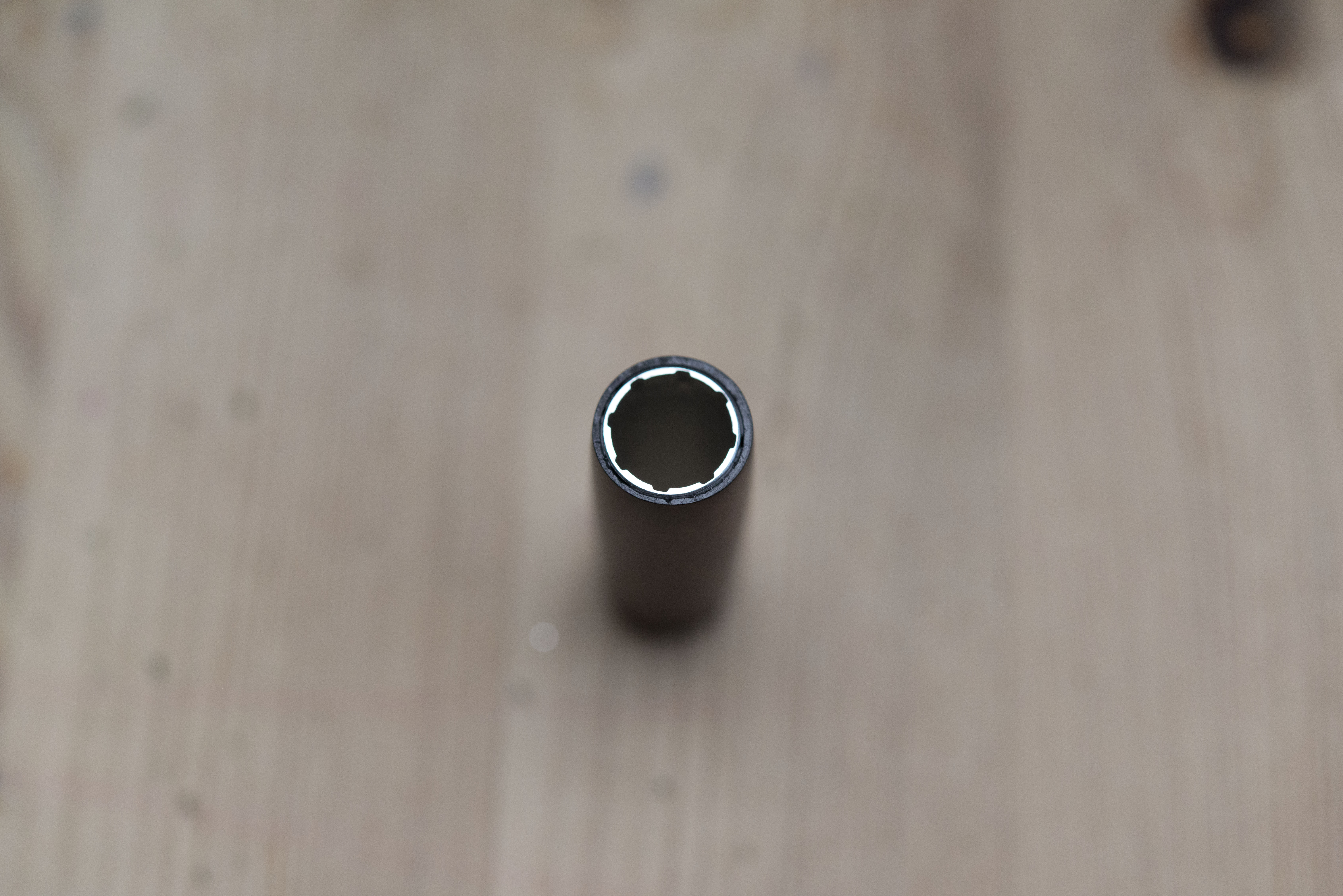 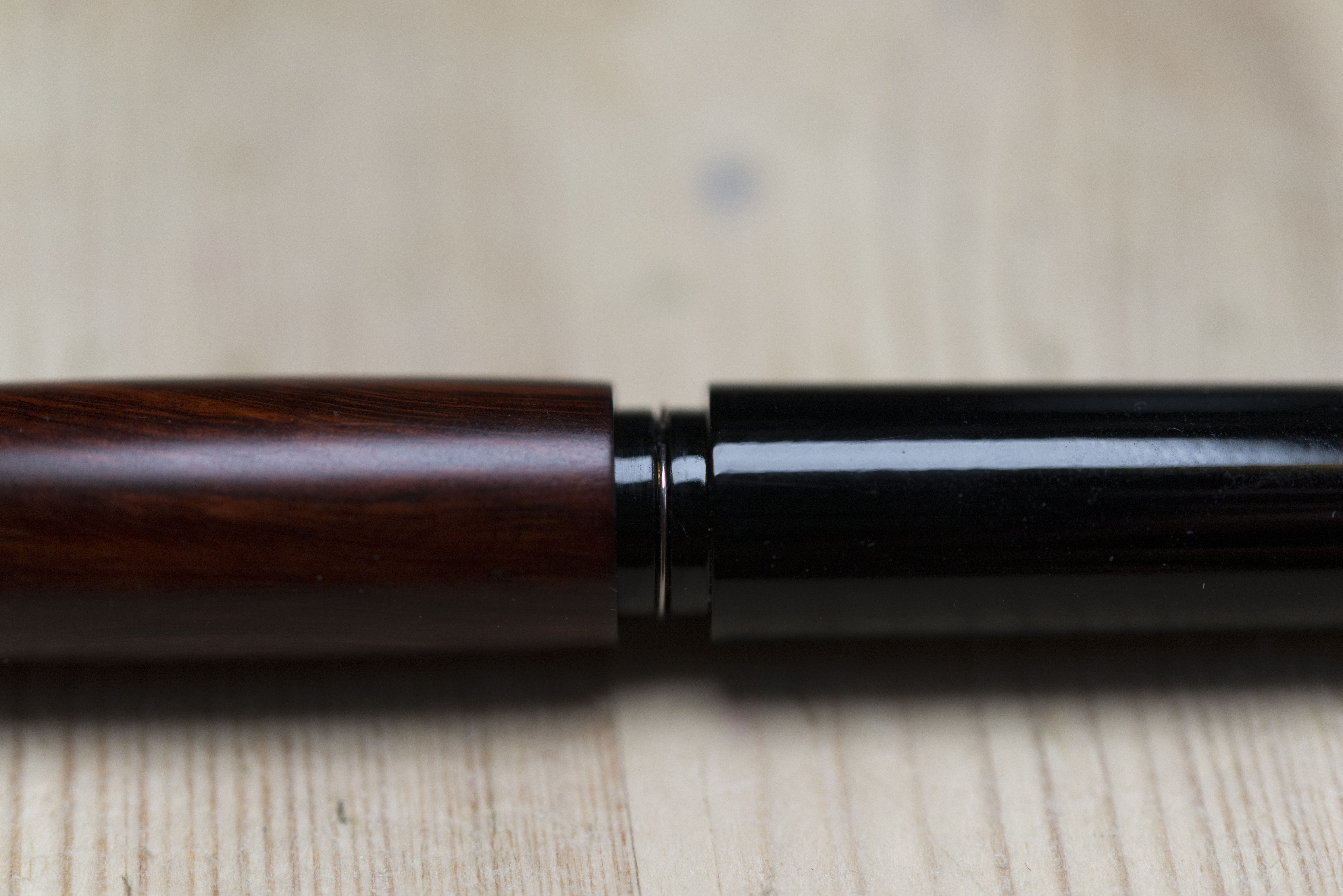 The grip itself appears to be a plastic hoop with grooves at the narrower end and the briarwood sleeve squeezed on to it.  Being plastic underneath hopefully removes the risk of the wood cracking through the base hoop expanding and contracting with extremes of heat and cold, as might happen if it were metal instead. 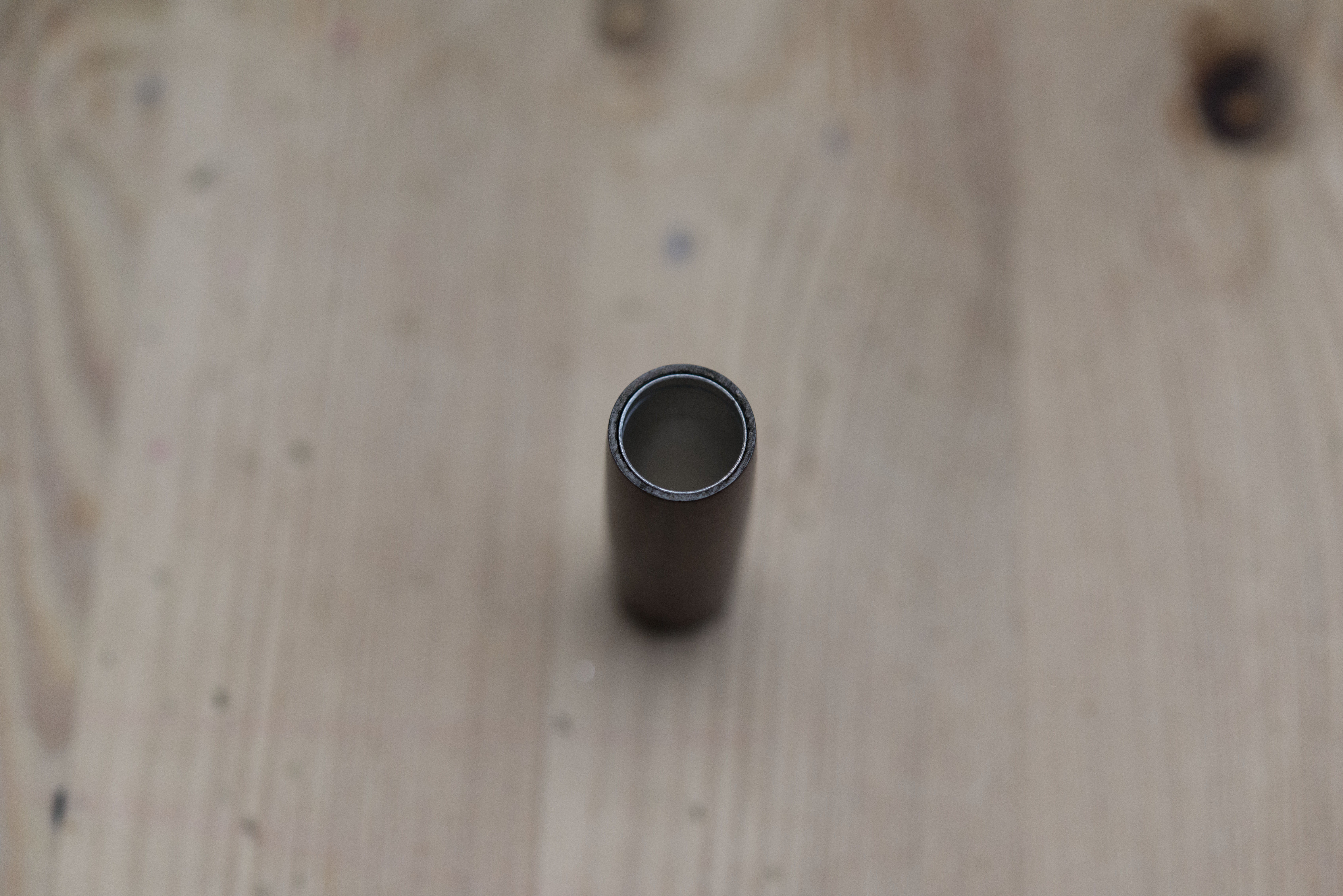 I would like to say buying this pen was a whim, but in reality I had been considering this particular model for a few years.  I like the feel of wood in a pen, and the combination of that and the black lacquer has always visually appealed to me, but at the same time it has always looked too thin for my personal tastes and also seemed expensive, despite the gold nib and the lacquered barrel.  With the two luxury grips being almost £20 more than the cheaper ones, and the gold nib being another £85, the lacquering is actually quite a cheap addition, so intellectually the pen is actually quite good value.  Note the lacquer is not urushi and I’m not sure how tough it may be (as I have already managed to scratch the cap finial).  So am I glad I’ve bought this pen.  Yes and no.  It writes well, the wood is comforting, it’s pleasant to hold, but at the same time I’m not drawn to it.  Within the Lamy product range itself, at a similar price, I prefer the Scala (I’ll review this at another time) and possibly the 2000 (which I consider a very good work horse pen, but one which does not grab me).  Looking at other grab-and-go pens in my collection, this pen will ultimately only see occasional use when I want something slightly different to write with.